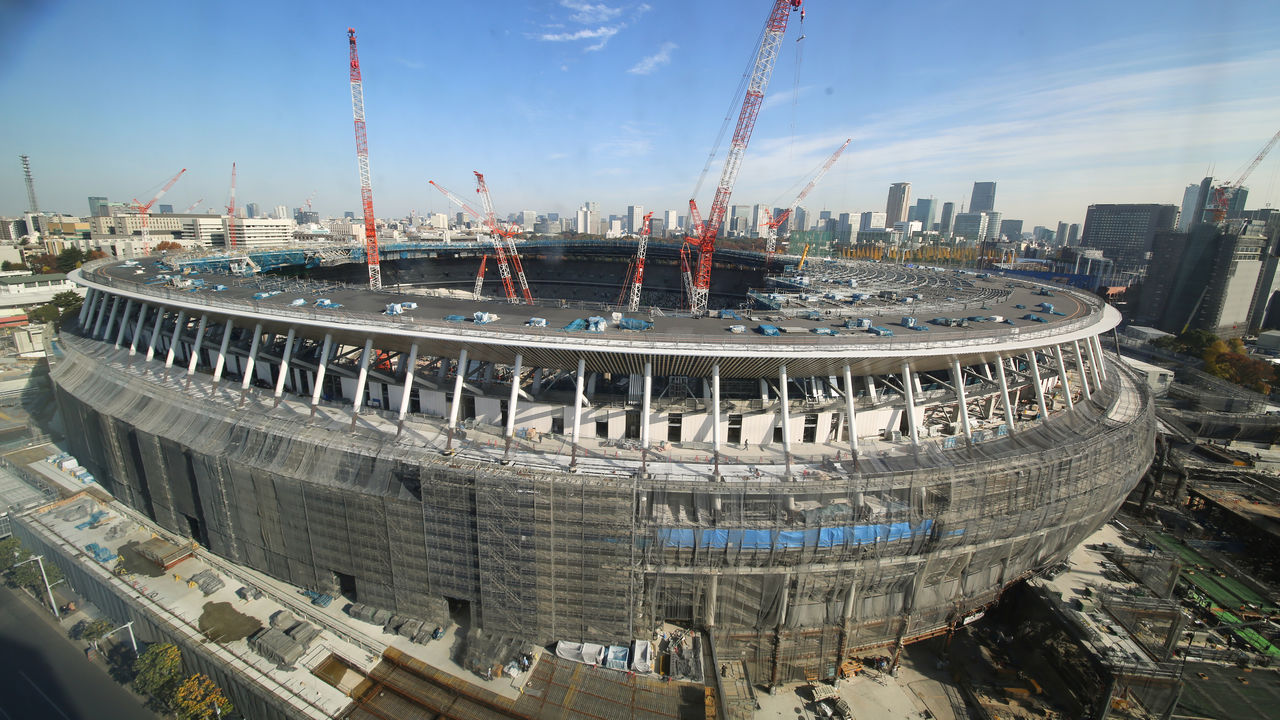 Getting the New National Stadium Ready On Time

Jan 1, 2019
The 2020 Tokyo Summer Olympics and Paralympics are now less than two years away. After the design concepts and construction plans for the New National Stadium were revised in mid-process, worries arose about whether it would be ready for the Opening Ceremony in July 2020. We visited the Japan Sport Council to find out more about the progress being made.

Preparations are underway in Tokyo and elsewhere in the country for the opening of the Summer Olympic and Paralympic Games on July 24, 2020. The most concerning aspect of these arrangements is, of course, the progress on the New National Stadium, the main venue for the games. The original design proposal by the architect Zaha Hadid was scrapped, even after several revisions, necessitating a sudden rethink; it was only in December 2015 when a concept by Kuma Kengo was adopted as the final design. This state of affairs raises questions about how the delayed construction on the stadium is going. 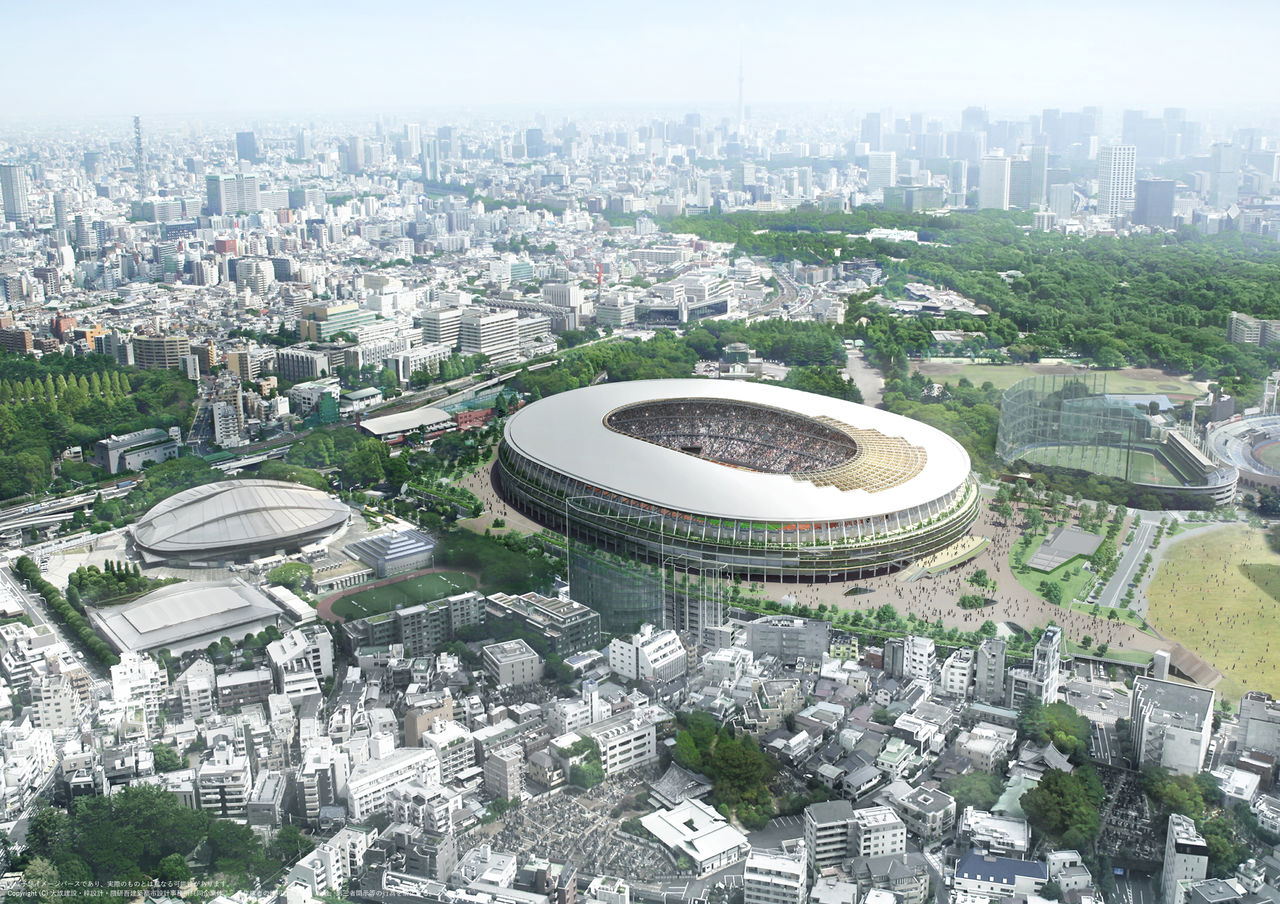 To find out about the current situation, we visited the offices of the Japan Sport Council, the entity that formally placed the order for the stadium, located in central Tokyo’s Jingū Gaien district. There we spoke with Komatsu Yukio, a deputy department director at the New National Stadium Planning and Construction Bureau, and Tasaka Akihiko, manager of the bureau’s Building Division, which handles the design. 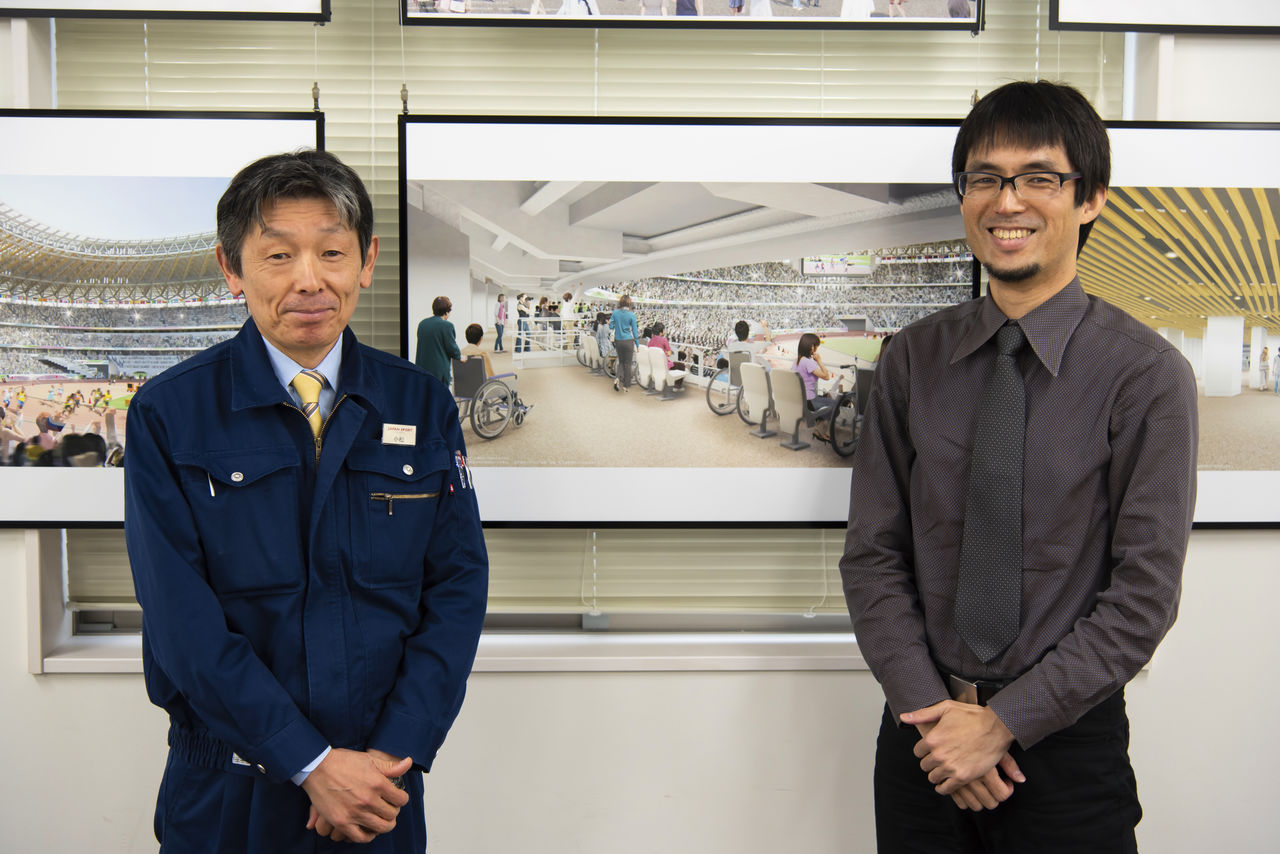 Komatsu Yukio (left) and Tasaka Akihiko, flanking an illustration of wheelchair seating at the stadium.

INTERVIEWER  Let’s begin with a progress report on stadium construction.

KOMATSU YUKIO  It’s now been twenty-five months since we broke ground in December 2016, and work is proceeding steadily. There have been no significant delays. Provided that nothing really out of the ordinary happens, we should be on track to meet the November 2019 deadline.

INTERVIEWER  Walking around the site before this interview, we were impressed to see that much of the steel frame of the roof was in place and a good third of the scaffolding surrounding the exterior wall had already been taken down. The schedule must be pretty tight on a job of this magnitude.

KOMATSU  The schedule was fixed from the outset, so from the design stage we were already creating the technologies and techniques we needed to procure materials and shorten the schedule. A much bigger concern for us was the labor shortage, owing to the overall aging of Japanese society on top of the falling number of construction workers in Japan these days. We haven’t had serious problems in this regard either, though.

TASAKA AKIHIKO  For the foundation and the stadium stands, we used preformed ferroconcrete blocks. By installing these instead of pouring concrete onsite, we avoided waiting around for the concrete to set before we could work with it. Similarly, we’re working the steel frame that forms the rooftop beams in two parts: the base frame, which forms the roof’s foundation, and unit frame at the end of the roof structure. That unit frame is further made up of three units, which are assembled on the field.

INTERVIEWER  By working simultaneously on the field and on the upper stands, you’re shortening the schedule?

KOMATSU  That’s right. The work demands precision, though, to raise up each of the units by crane and connect them to the base frame. The rooftop is supported by 108 steel frames installed in a round shape, and misaligning the positioning by even a few millimeters when the joining work is done has a tremendous impact on the other units. We use laser-sighting and other 3D measurement technologies to line up targets for joining the frames. This has let us reduce alignment errors of the base portions to within 3 millimeters total. 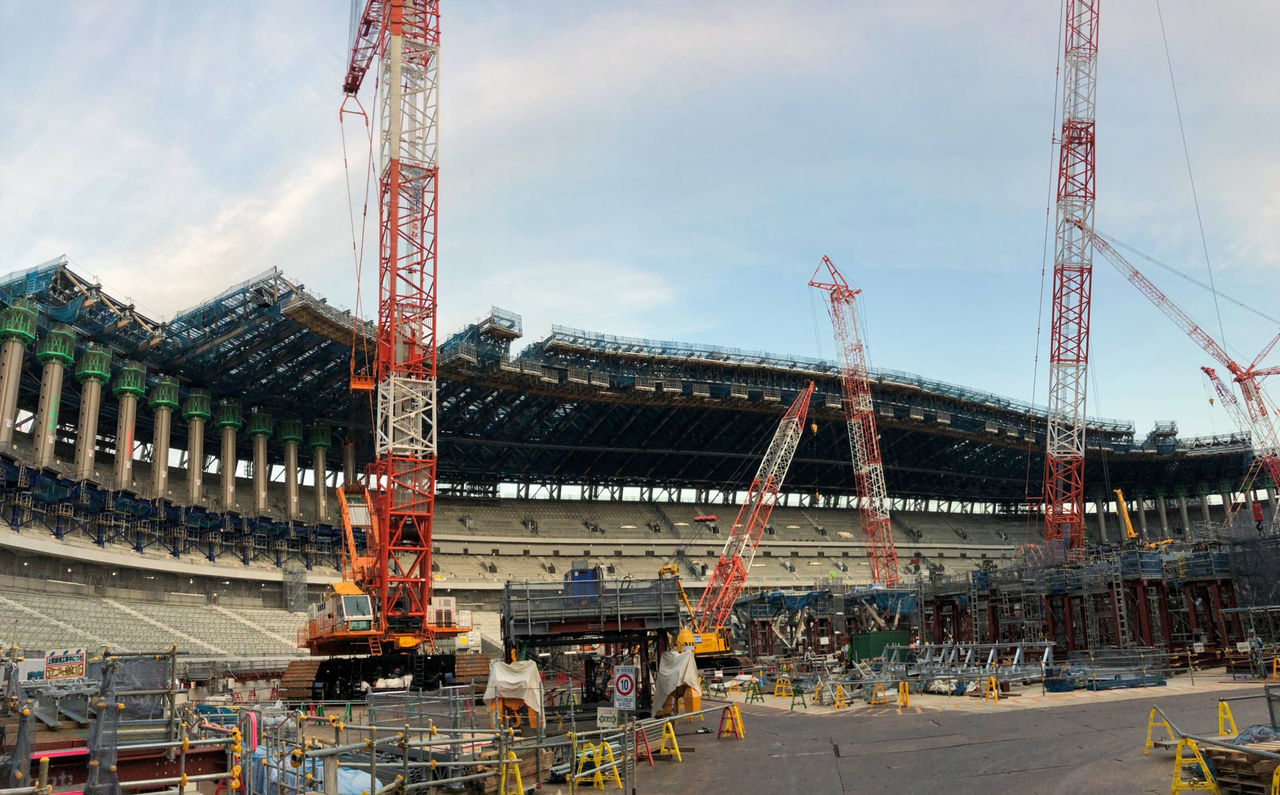 Unit frames assembled on the field are raised and installed by cranes. (Photo courtesy JSC)

INTERVIEWER  Have there been any changes or cost overruns?

TASAKA  There are numerous little changes on a typical construction site. We execute a change agreement with the contractors every half term, but given how big this job is, we’ve had hundreds of changes each period, working out to more than 1,000 over the past two years. The schedule is set, however, and the budget does have a ceiling. And we keep adjusting to stick to both. 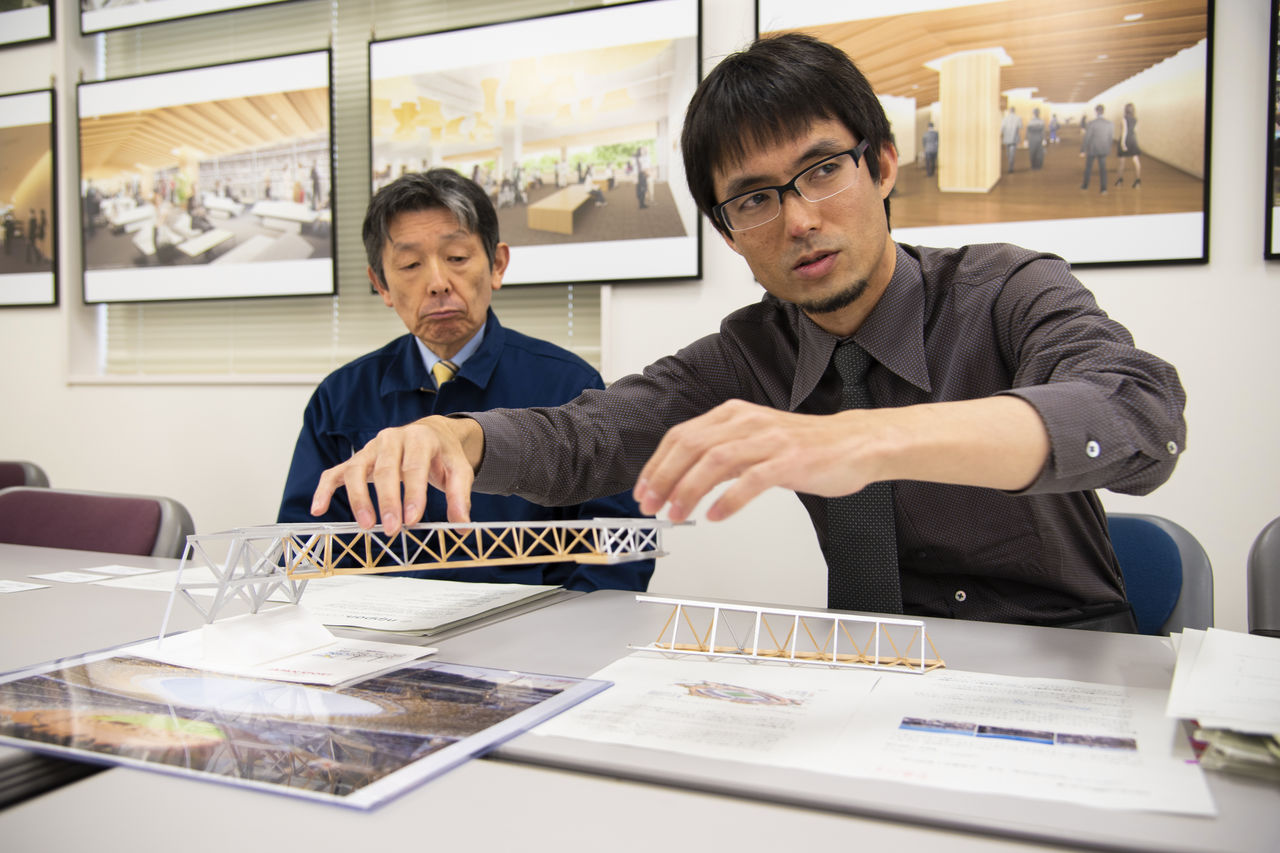 INTERVIEWER  The project is starting to look like a stadium. What’s it like to see design become reality?

KOMATSU  This will be one of Kuma Kengo’s signature creations, and we’re sweating the details on the construction itself. After all, there aren’t any other stadiums anywhere that give the sense of the presence of wood all around. 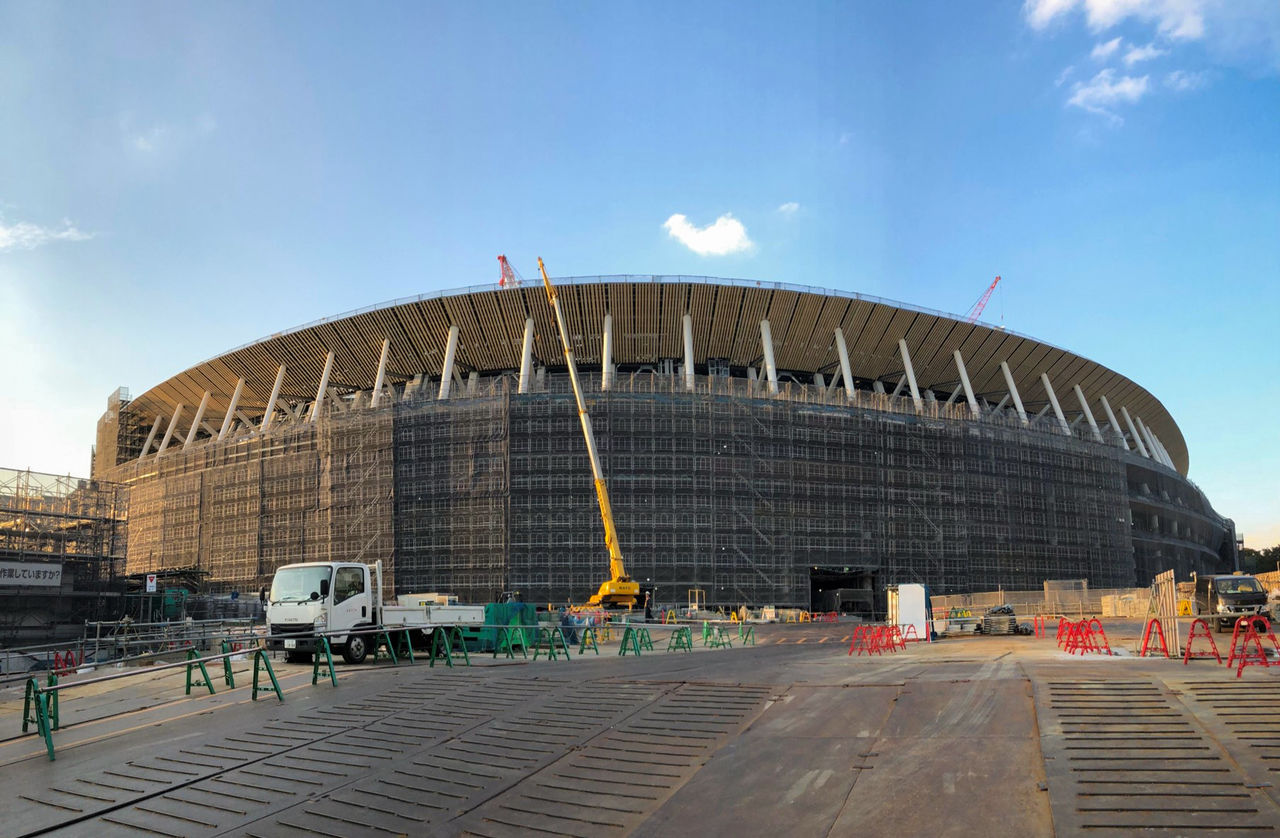 With the upper scaffolding removed, the shape of the wind vane eaves on the rooftop can be clearly seen. (Photo courtesy JSC) 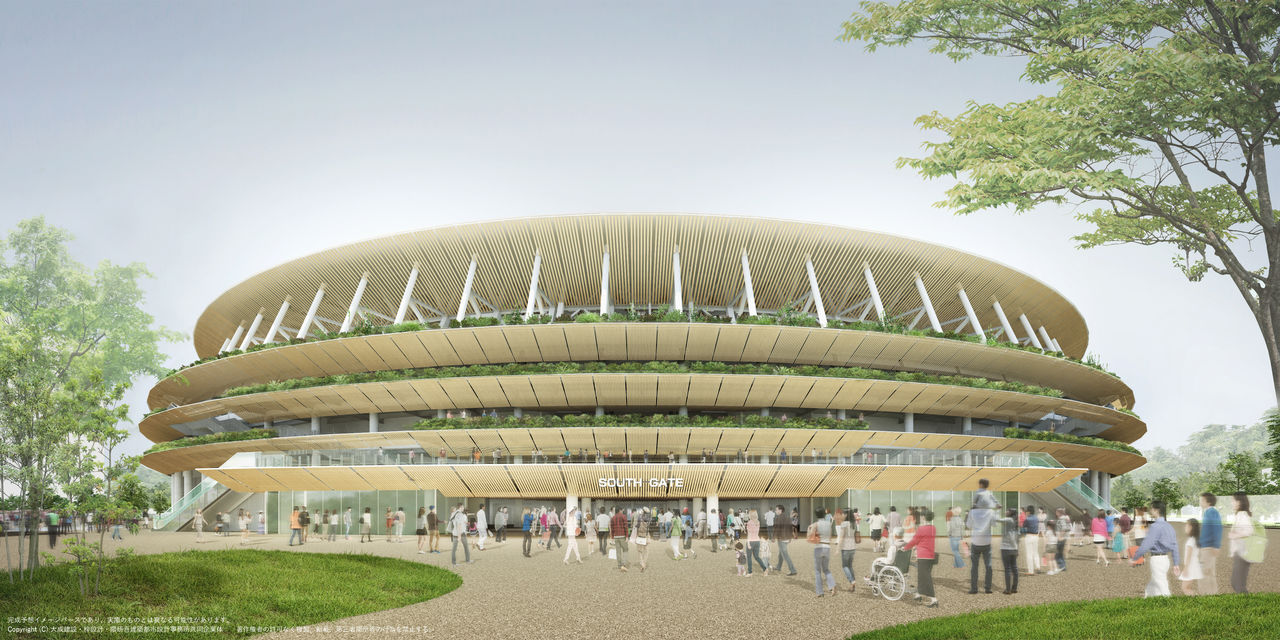 INTERVIEWER  When one looks up at the stadium while walking around the construction site, the lumber used in the eaves is clearly visible, giving an impression of warmth, of comfort, rather than the inorganic sense that is all too typical of large-scale architecture. In January 2017 there was an announcement that lumber for the project would be procured from all forty-seven Japanese prefectures. Did you succeed in that effort?

TASAKA  The contractors proposed using domestic lumber that has obtained official forest certification to build the stadium’s wooden eaves. When we first started the project, there were some prefectures that couldn’t provide this certified lumber, but thanks to the efforts of local governments and businesses to obtain this certification in order to help with the stadium, we did indeed reach that goal. 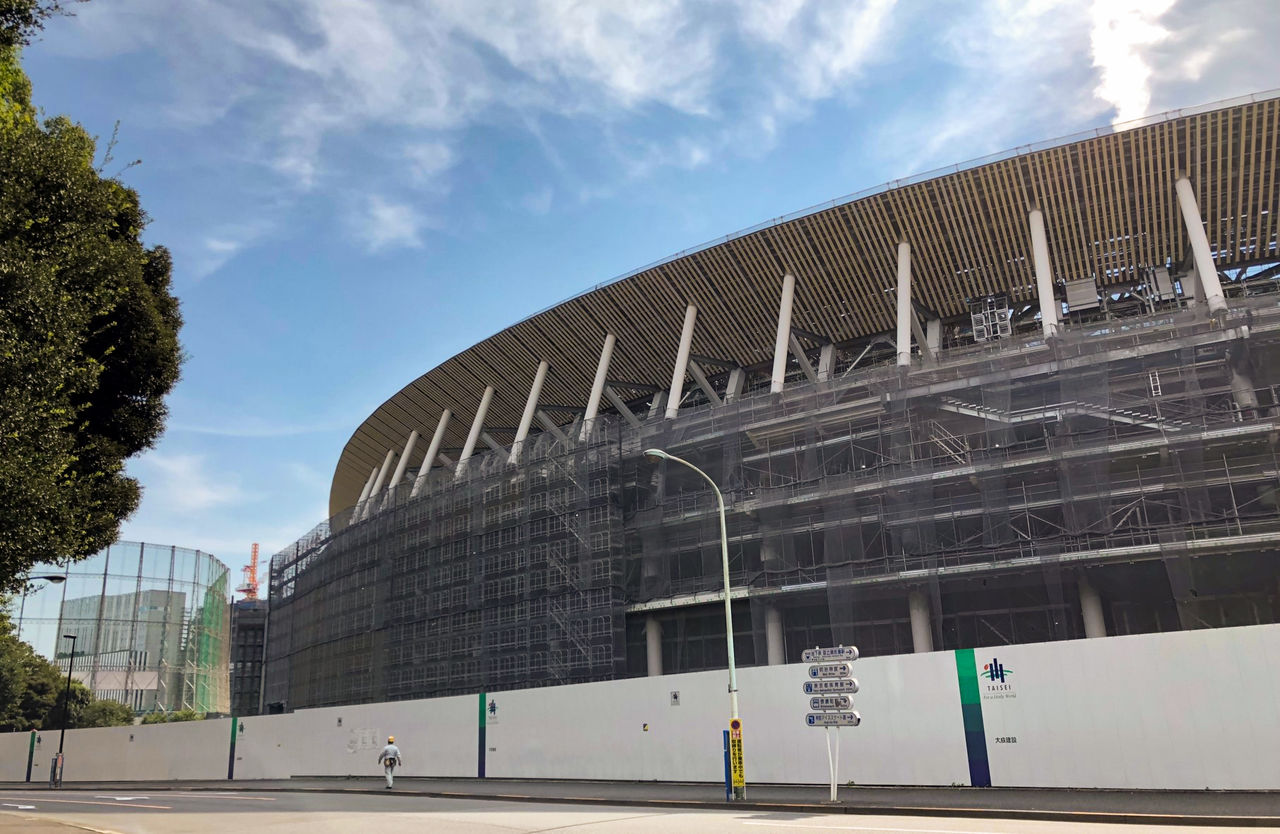 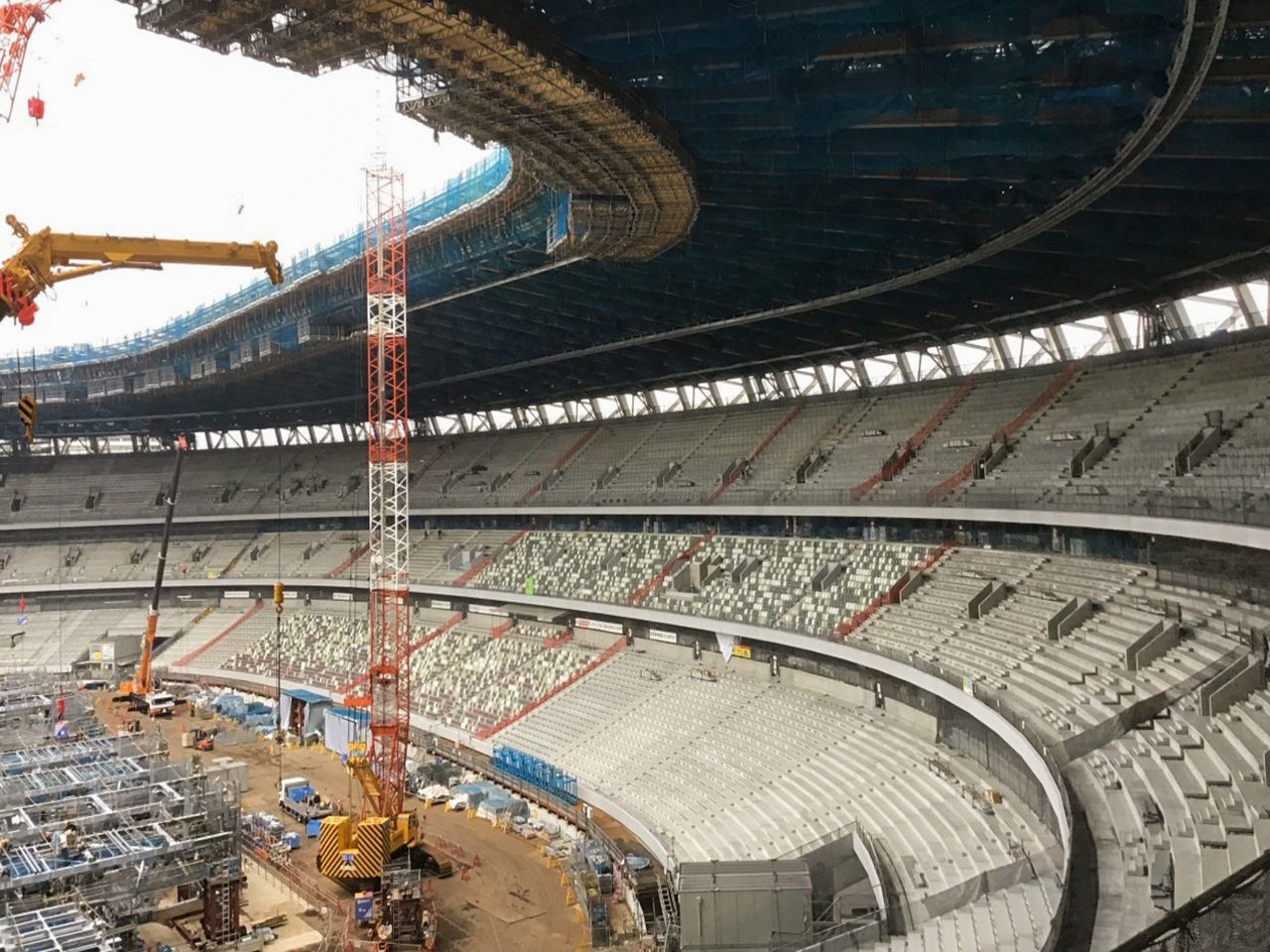 The seating in the stands has been carefully arranged to create pleasant color gradations blending the reds and greens of the field, the timber in the roof, and the blue of the sky.

INTERVIEWER  What about the interior facilities? The seats, the views of the events?

TASAKA  We’re getting the word out about our world-class universal design, and we definitely want people to come to the games and experience it for themselves. We conducted a total of twenty universal design workshops over the course of the project, from the design phase right through to the actual construction work itself. We invited fourteen organizations to participate, including disabled persons’ groups, childcare groups, and elder-care organizations. The opinions collected through this process have been reflected wherever possible in the stadium’s planning and construction.

INTERVIEWER  What sort of opinions were put forward?

TASAKA  Wheelchair seating is commonly anchored in place sideways in these facilities, because of the greater space such seats take up over ordinary seating. However, some people told us they want to sit in the main grandstands to see the games, or to take in the whole field from above. To accommodate these requests, we’ve installed a balance of these various types of seating on each story of the stands, which consist of three layers, accessed via entrances on five stories in all. In like fashion, we’ve installed assistive listening facilities in various areas for use by groups of hearing-impaired persons. Based on our workshop feedback, we’ve also made improvements to things like the heights of tactile boards used to help visually impaired persons navigate the facilities and the positioning of handgrips in the restrooms. 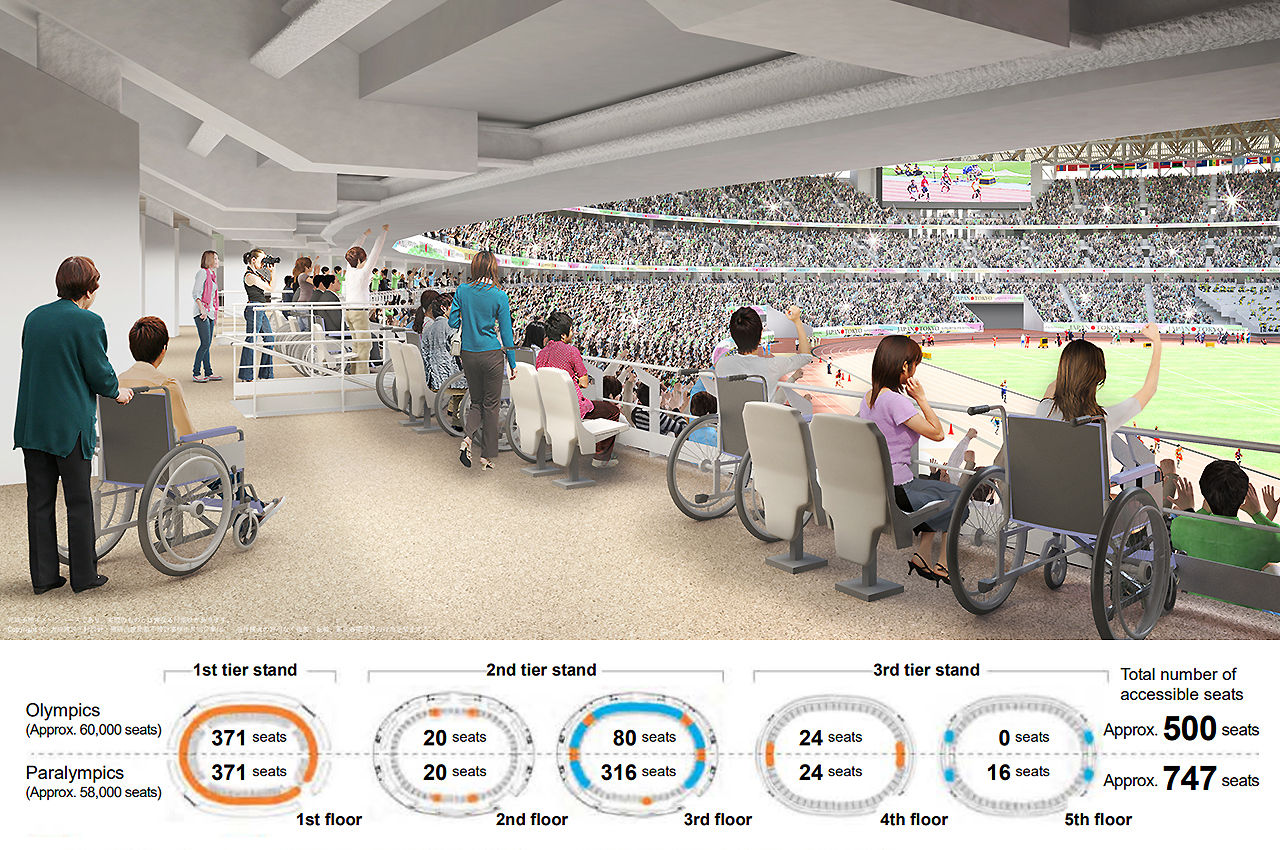 Top: Seating in the wheelchair section is arranged so that all wheelchair users can sit next to accompanying persons. Bottom: Permanently installed wheelchair seating is designated in orange. Extra seating to be installed during the Paralympics is designated in blue. Illustration created by Taisei Corporation, Azusa Sekkei Co., and Kuma Kengo and Associates JV. (Image courtesy JSC)

INTERVIEWER  Japan has been experiencing heatwaves in recent summers, and there are also concerns about earthquakes and other natural disasters. What measures do you have in place to respond to such incidents?

TASAKA  The stands are shaded by the rooftop, and the eaves also efficiently draw seasonal winds into the stadium. Furthermore, above the first and second layers of the stands, we’ve installed fans to facilitate airflow. The breezes created by these features should lower the temperatures in the stands and, combined with the updraft rising off the field as it’s warmed by sunlight, should effectively vent heat from within the stadium into the air overhead. 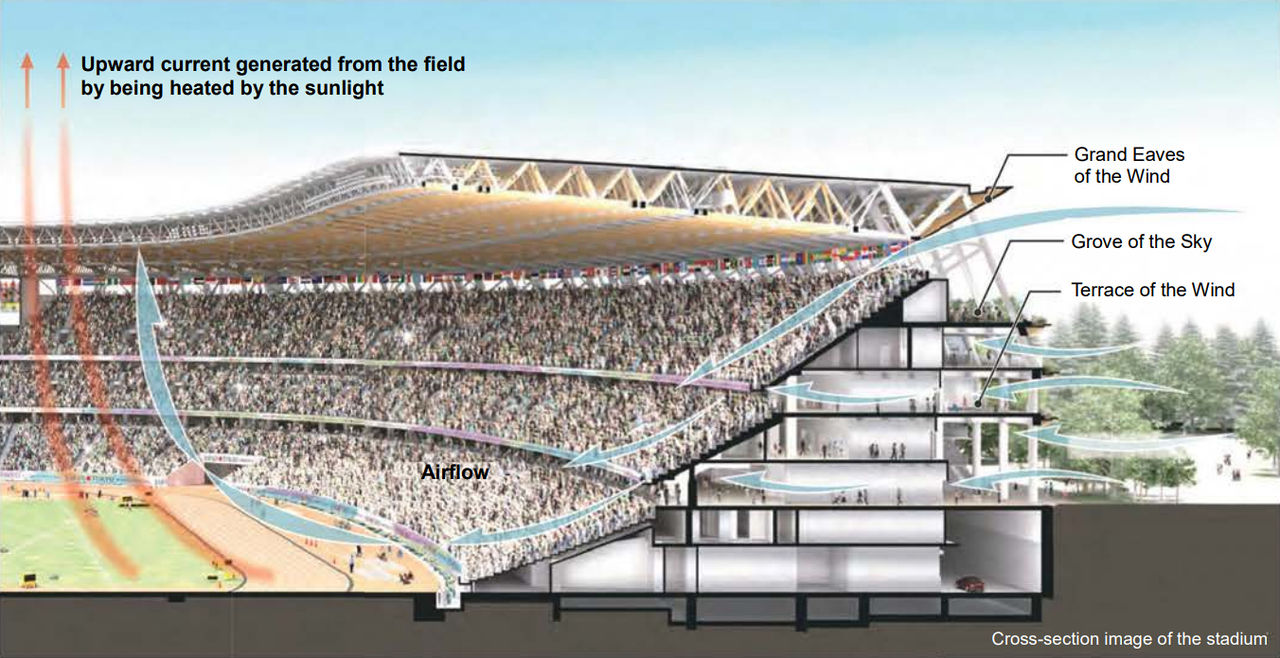 The structure has been carefully designed to create flows of air and heat as shown here. Computer simulations have shown that the air flows will improve the conditions on the field and in the spectator seating areas without interfering with the events taking place. Pipes carrying hot and cold water run under the field, adjusting the turf’s temperature and otherwise helping to maintain the natural lawn. Illustration created by Taisei Corporation, Azusa Sekkei Co., and Kuma Kengo and Associates JV. (Image courtesy JSC)

TASAKA  To prepare for earthquakes, we’re building the upper levels with oblique beams and reinforcing steel braces that resist deformation, while the lower levels have a soft first story damping structure, with oil dampers concentrated in certain locations. The seats and the passages have been designed to facilitate rapid evacuation in case of emergency, and we also have facilities for using the stadium as a local disaster recovery site, including standby generators and storage areas containing disaster recovery equipment.

INTERVIEWER  The Emperor’s Cup soccer championship, scheduled for New Year’s Day 2020, are slated to be the first major sporting event open to the public at the New National Stadium. That leaves no room for error whatsoever in the schedule, especially when preparations for that game are taken into account.

KOMATSU  From a planning standpoint, everything is in order. We’re making safety our primary concern in construction so that accidents, won’t impact the process at all. 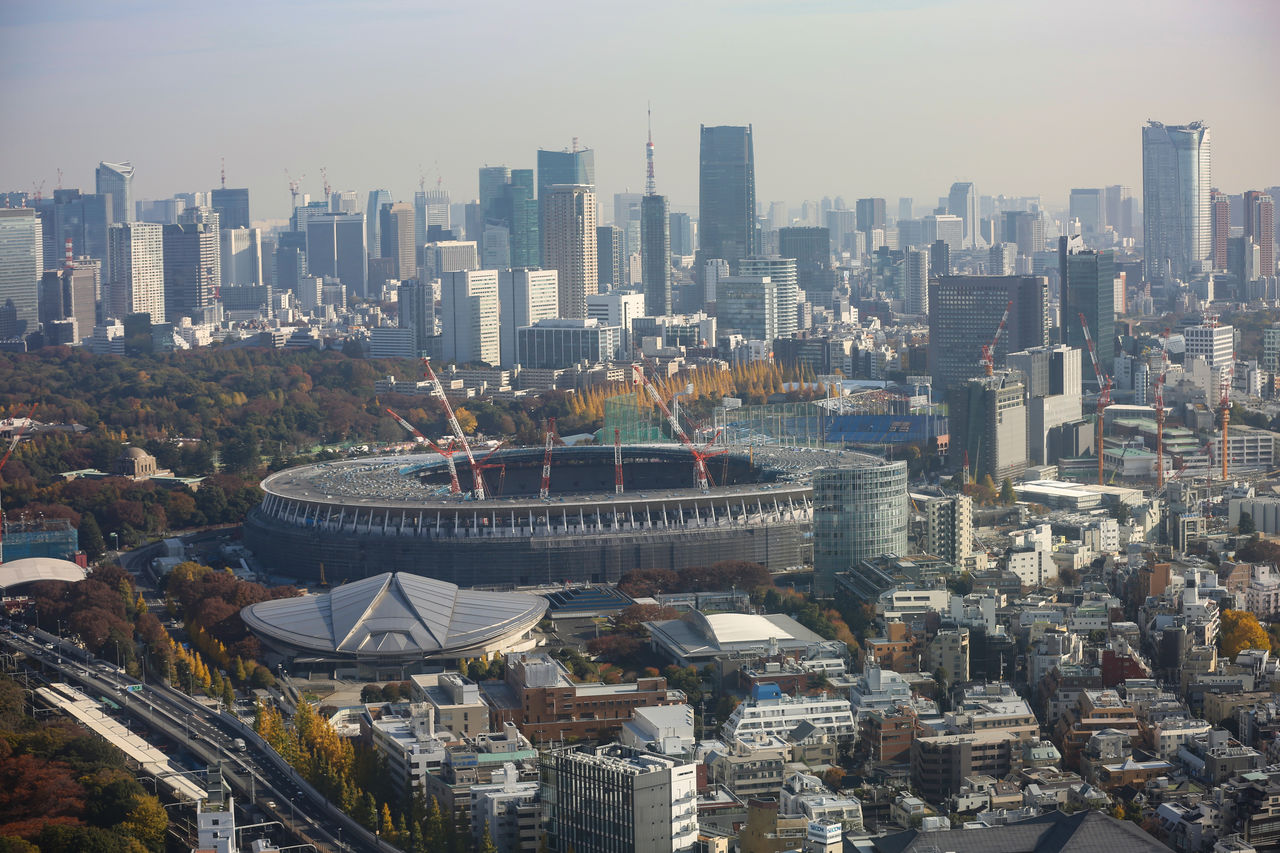 Having an Olympic stadium in the heart of the city will be a special experience for spectators and athletes in 2020. (Photo courtesy JSC, with thanks to NTT Docomo)

(Originally written in Japanese. Reporting and interview photos by Nippon.com. Banner photo: The stadium as it stood on December 1, 2018. Photo courtesy of JSC, with thanks to Sendagaya Intes Bldg.)