Society Culture Jun 30, 2016
Kuma Kengo made up his mind to become an architect after seeing the Yoyogi National Gymnasium designed by Tange Kenzō for the 1964 Tokyo Olympics. And now he has been selected as the architect of the main stadium for the 2020 Tokyo Olympics. In this interview he explains the ideas informing his design. 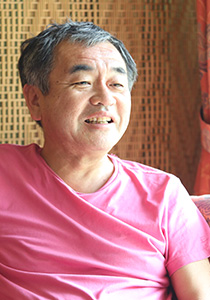 Born in Yokohama in 1954. Completed his master’s degree in architecture at the University of Tokyo in 1979. Studied at Columbia University as visiting scholar. Established Kengo Kuma & Associates in 1990. Professor at the Graduate School of Architecture, University of Tokyo, since 2009. His many award-winning works include the Noh Stage in the Forest at the Toyoma Center for Performance Arts (1997 Architectural Institute of Japan Annual Award), the guest house Water/Glass (1997 DuPont Benedictus Award), Nezu Museum, Tokyo (2010 Mainichi Art Award), and Yusuhara Wooden Bridge Museum (2011 Education Minister’s Art Encouragement Prize).

KIYONO YUMI   You are currently designing the new National Stadium for the 2020 Tokyo Olympics and Paralympics. This is a project that got off to a rocky start, with the organizers deciding to scrap the original design and conducting a competition to select a new one.

KUMA KENGO   I received many requests from the media to comment on the controversy that arose over the original design by Zaha Hadid, but it was a very complex issue for me, and I couldn’t speak lightly about it. I was thinking that if another architect took on this job, it would be like catching a hot potato—and it never occurred to me that I’d be the one to catch it! 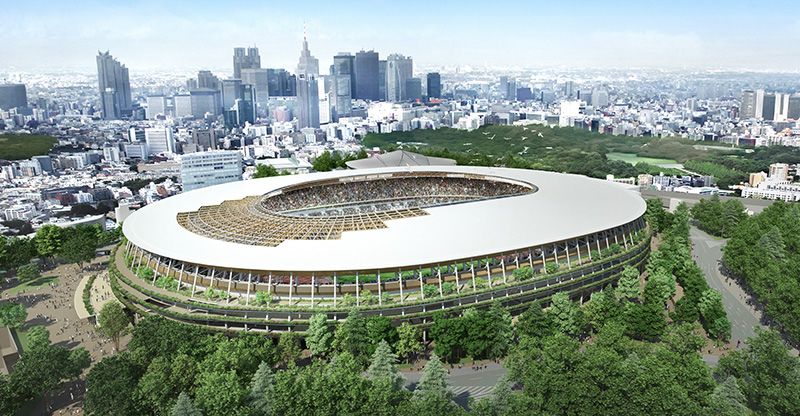 KIYONO   Why didn’t you take part in the original competition?

KUMA   The conditions for submitting a design included having won a major award like the Pritzker Prize and having experience in designing a large-scale stadium, so it was clear that they weren’t looking for the likes of me (laughs). But then the original design was scrapped and they started again from scratch. And a major construction company invited me to work together with them in submitting a proposal in the new competition. I was truly surprised.

KIYONO   And why were you willing to grasp this “hot potato”?

KUMA   Japan has become conservative, and these days it’s virtually unheard of for a solo architect to get involved in a project of this scale. I made up my mind to give this job everything I’ve got partly because I want to keep the flame burning in the architectural profession. 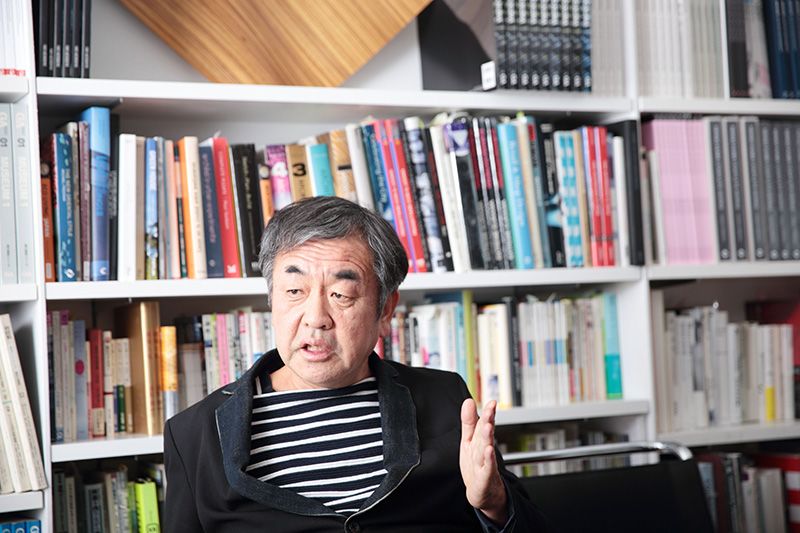 KIYONO   You remarked that getting this job was a “stroke of fortune.”

KUMA   I grew up during the postwar era of rapid economic growth in Japan. In advance of the first Tokyo Olympics in 1964, splendid buildings popped up around Tokyo, and the city as a whole was transformed. The two Yoyogi National Gymnasium buildings designed by Tange Kenzō are emblems of this period. After the Olympics were over, I used to go regularly to the pool in the Yoyogi First Gymnasium as an elementary school student. The light shining down from the windows in the high ceiling made the water of the pool sparkle. I was captivated by this sublime sight, and that was what made me decide that I wanted to become an architect.

KUMA   And this was only after the twists and turns in the design competition. I can only think that fate had a hand in this outcome (laughs).

KIYONO   I understand that the schedule for the project is very tight.

KUMA   Every construction project involves considering various options up to the last possible moment while running around under a tight schedule. What’s different about the schedule for this project is that it doesn’t even leave time for running around. But there are two points that I focus on whenever I’m designing a building. One is to minimize the height. The other is to try to use local natural materials. You could call me simple that way (laughs). As originally designed, the stadium had a height of seventy-five meters, but through repeated precise structural calculations I was able to lower it to forty-nine meters. And when I accomplished this, it gave me a sense of confidence that I could win the job. 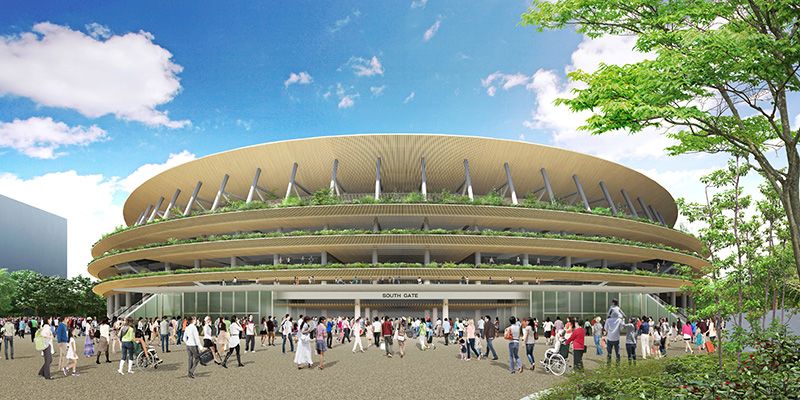 KIYONO   I understand that authoritative figures who value the artistic side of construction don’t care for the design-build method, under which a major construction company and an architect undertake a construction project as a team, as in the case of the new stadium.

KUMA   They probably don’t like the fact that the construction company takes the lead under this arrangement. But as I see it, the design-build method is both necessary and effective in the case of a design competition like the one for the new National Stadium, where the schedule and the budget are exceedingly tight. With the revolution in information technology, the world of the twenty-first century is changing dramatically. If architects insist on holding on to their traditional position of authority even in the face of change, they are liable to be shunned as self-assertive oddballs out of touch with the real world. I’ve sensed this danger firsthand in the course of my own work around the world. Regardless of the project delivery method adopted, it’s possible to create good buildings if architects keep their eye on the quality that must be achieved and devote themselves earnestly to the job. As I see it, architects should actually be advocates of the trend toward the design-build arrangement.

Fitting the Edifice to the Environment

KIYONO   One thing that stands out about the new stadium design is the use of wooden materials.

KUMA   Wooden construction is now a major trend on the international building scene. In Japan people were traumatized by the Great Kantō Earthquake of 1923, when fire consumed the wood-built capital of Tokyo. But major technological strides in the past two decades have given rise to wooden materials that are just about as fire resistant as concrete. This has made it practical to put up large buildings made of wood. 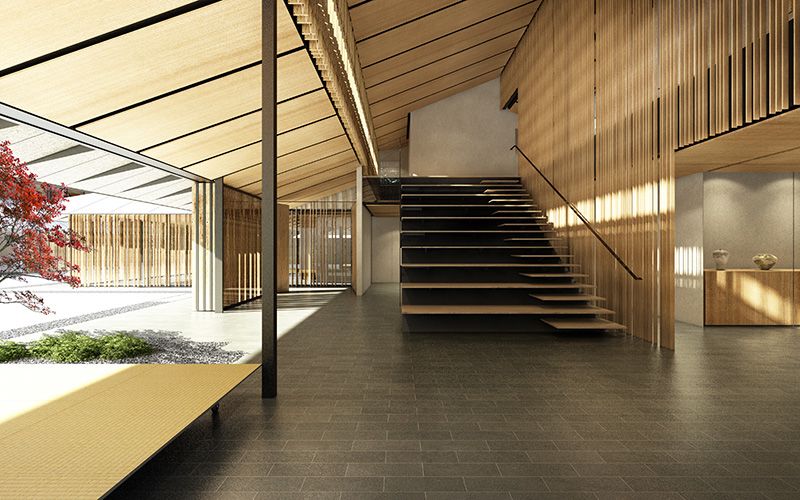 Renovation project for the Portland Japanese Garden in Oregon: Kuma’s design for this project features use of local wood and stone materials. (Image by Kengo Kuma and Associates.) 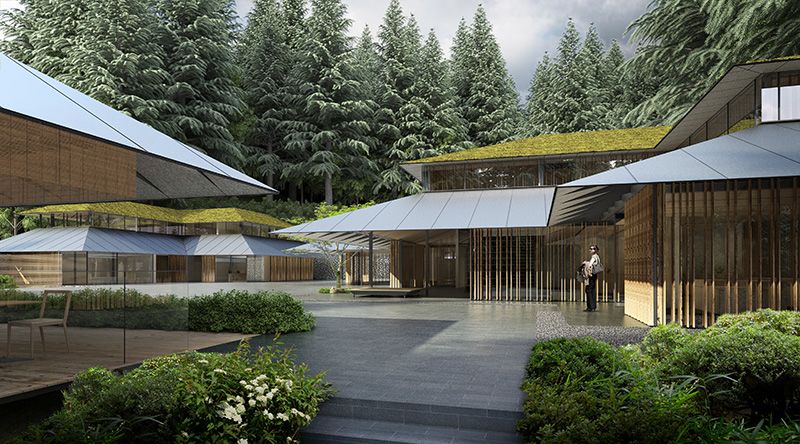 Exterior of the Portland Japanese Garden. (Image by Kengo Kuma and Associates.)

KIYONO   How about the cost?

KUMA   It wouldn’t do if using wood resulted in a higher cost. My design uses Japanese cedar for the exterior walls and Japanese larch for the pillars supporting the roof. Both are domestically grown and readily available, so their prices are low. Using imported wood means generating large amounts of carbon dioxide to ship it; with domestic wood this can be avoided. The technologies to be employed in processing it are ones commonly used in small local workshops, and no investment in special equipment is required. Putting together these plain “little” technologies will allow us to create a stadium that will hold eighty thousand people. I’m fascinated by this grand challenge.

KIYONO   Doesn’t the main Olympic stadium need to be monumental?

KUMA   Instead of the old-fashioned idea of putting up a huge monument, my idea is to create a stadium that people will remember as part of the Meiji Shrine outer gardens, the wooded area in which it’s located. And we’re planning to uncover the Shibuya River, which was put underground during the rapid-growth years, and have it flow at surface level through the stadium grounds. I believe that creating something sustainable for future generations, with the surrounding nature open to the public, is a more important considerations than the physical shape of the edifice, and so that’s what I’ve been focusing my efforts on. 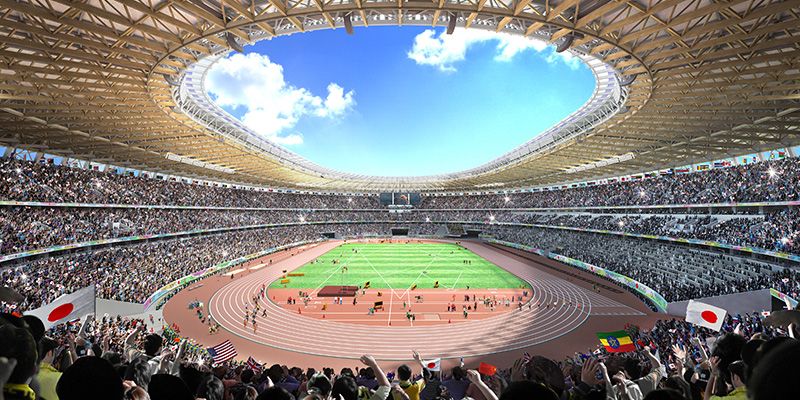 Kuma’s design for the new National Stadium has seats on three levels, so the stairways between levels have considerably fewer steps than in the original two-level design. (Image by Taisei Corporation/Azusa Sekkei/Kengo Kuma and Associates joint venture. Courtesy of Japan Sport Council.)

(Originally published in Japanese on June 20, 2016. Photos by Suzuki Aiko.)