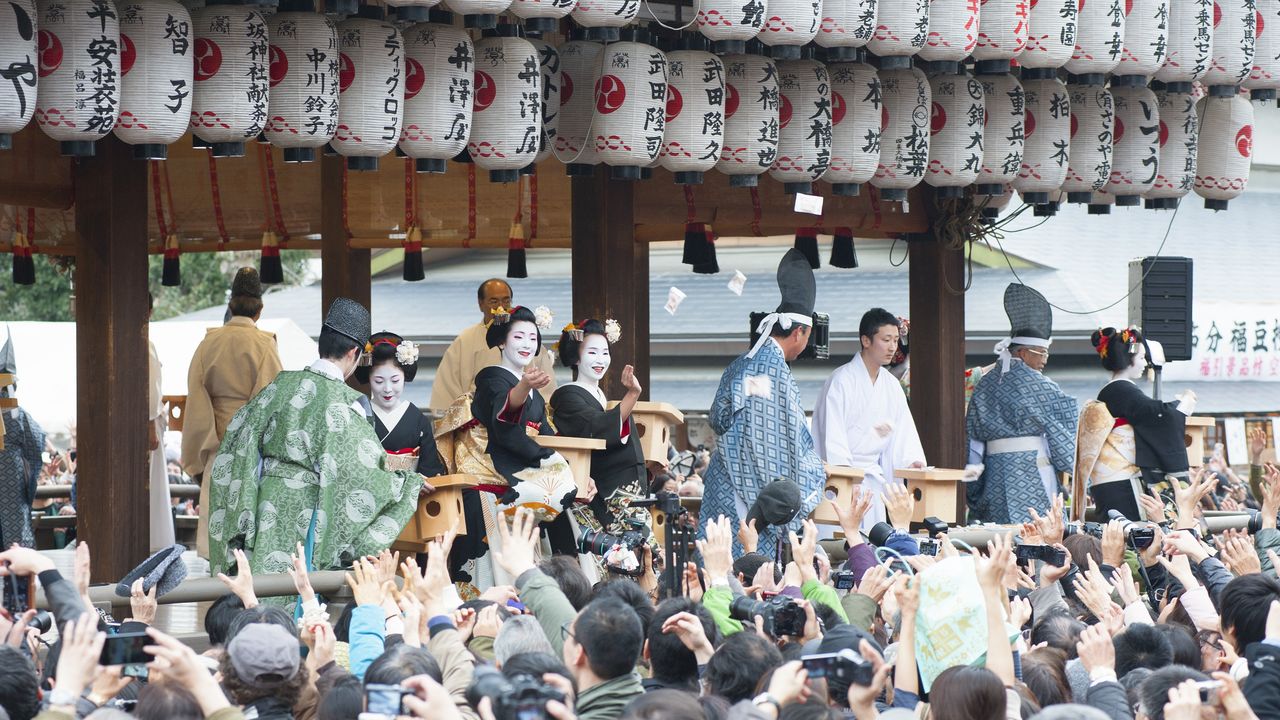 Travel Lifestyle Culture Feb 6, 2019
Setsubun, the end of winter in the traditional Japanese calendar, is known for mame-maki (bean-casting). Kyoto has many setsubun events, including an exorcism ritual dating back a millennium and maiko geisha trainees doing mame-maki.

On February 3, known in Japan as Setsubun, beans are cast in all manner of locations—households, workplaces, and schools alike—accompanied by shouts of “Oni wa soto, fuku wa uchi!” (Out with devils, in with good fortune!)

The term setsubun originally referred to the day before the beginning of each of the seasons, spring, summer, autumn, and winter alike. The first day of spring, or risshun, was also the start of the year in the old Japanese lunar calendar, as well as marking the transition from the cold of winter to the warmth of spring. It is said that for these reasons, this day became particularly significant, and over time, the term setsubun came to be associated uniquely with the start of spring as a result.

Traditionally, Japanese superstition held that the world was more susceptible to the influence of evil (as personified by oni, ogres or devils) during changes of the seasons. A ritual known as tsuina for dispelling the evil was thus performed in the Heian imperial court and other locales on the spring Setsubun, or New Year’s Eve according the old calendar. Also known as oni-yarai, the custom came from China sometime during the late seventh and early eighth centuries.

Mame-maki refers to dispelling oni by casting beans at them. The word mame here functions as a triple pun, as it can be written with characters 豆, meaning “beans”; 魔目, the “evil eyes” of the oni; and 魔滅, the “destruction of the fiends.” There is a story included in Ainōshō, a collection assembled around 1445 by Gyōyo, a Buddhist monk of the Muromachi period (1333–1568), to the effect that when oni appeared on Kyoto’s Mount Kurama, they were repelled by soybeans being thrown at them. One hypothesis holds that this anecdote was gradually mixed up with the tsuina ritual, resulting in the custom of casting beans on Setsubun, which has since spread throughout Japan. 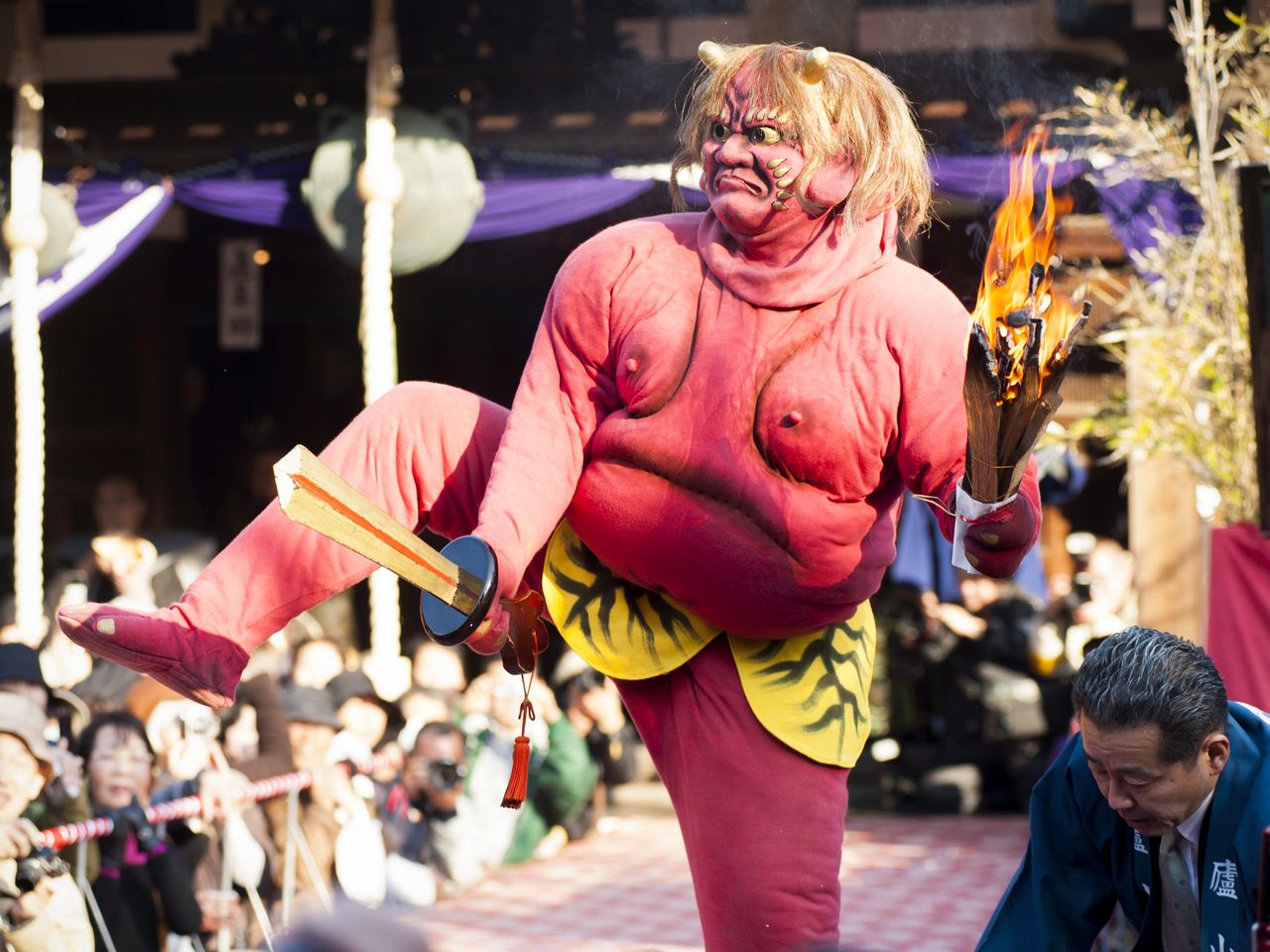 An aka-oni (red devil), with large eyes wide open, at the temple Rozanji.

Of particular renown among Kyoto Setsubun activities is the festival at the shrine Yoshida Jinja, in Sakyō-ku. Founded in 859 by Fujiwara Yamakage to enshrine the four deities of the Kasuga Taisha shrine of Nara, Yoshida Jinja is known for its deities, bringing good fortune and warding off misfortune, that guard the Kimon (devil gate) of the Kyoto Imperial Palace. The festival runs for three days, with the main event taking place on February 3. Some 800 stalls line the path to the shrine and the shrine grounds itself over February 2–3, with some 500,000 visitors in attendance during this time in a typical year. 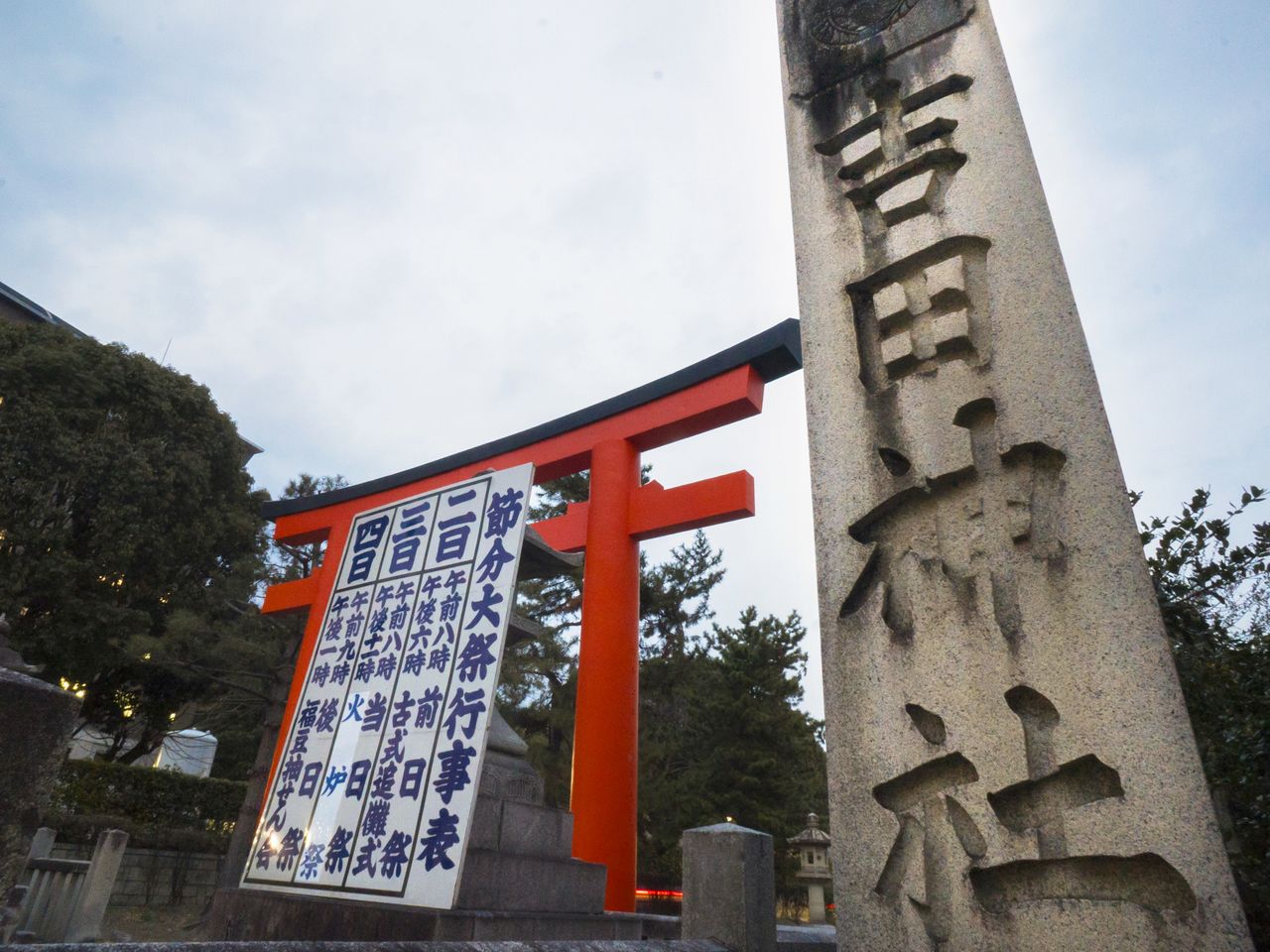 A sign listing Setsubun festival rituals is posted next to a torii gate at the shrine.

Descended from imperial court rituals performed in the early Heian period (794–1185), the tsuina ritual begins at 6:00 pm on February 2, the eve of Setsubun. Known commonly as oni-yarai, the pageant begins with the character Hōsōshi, who dispels devils, entering carrying a shield and pike, accompanied by children carrying torches. Aka-oni (red devils), ao-oni (blue devils), and ki-oni (yellow devils) run amok, symbolizing misfortune, only to have Hōsōshi run them down and weaken them. The ritual ends with participants dressed as court nobles shooting reed arrows from peachwood bows, thereby dispelling the oni. 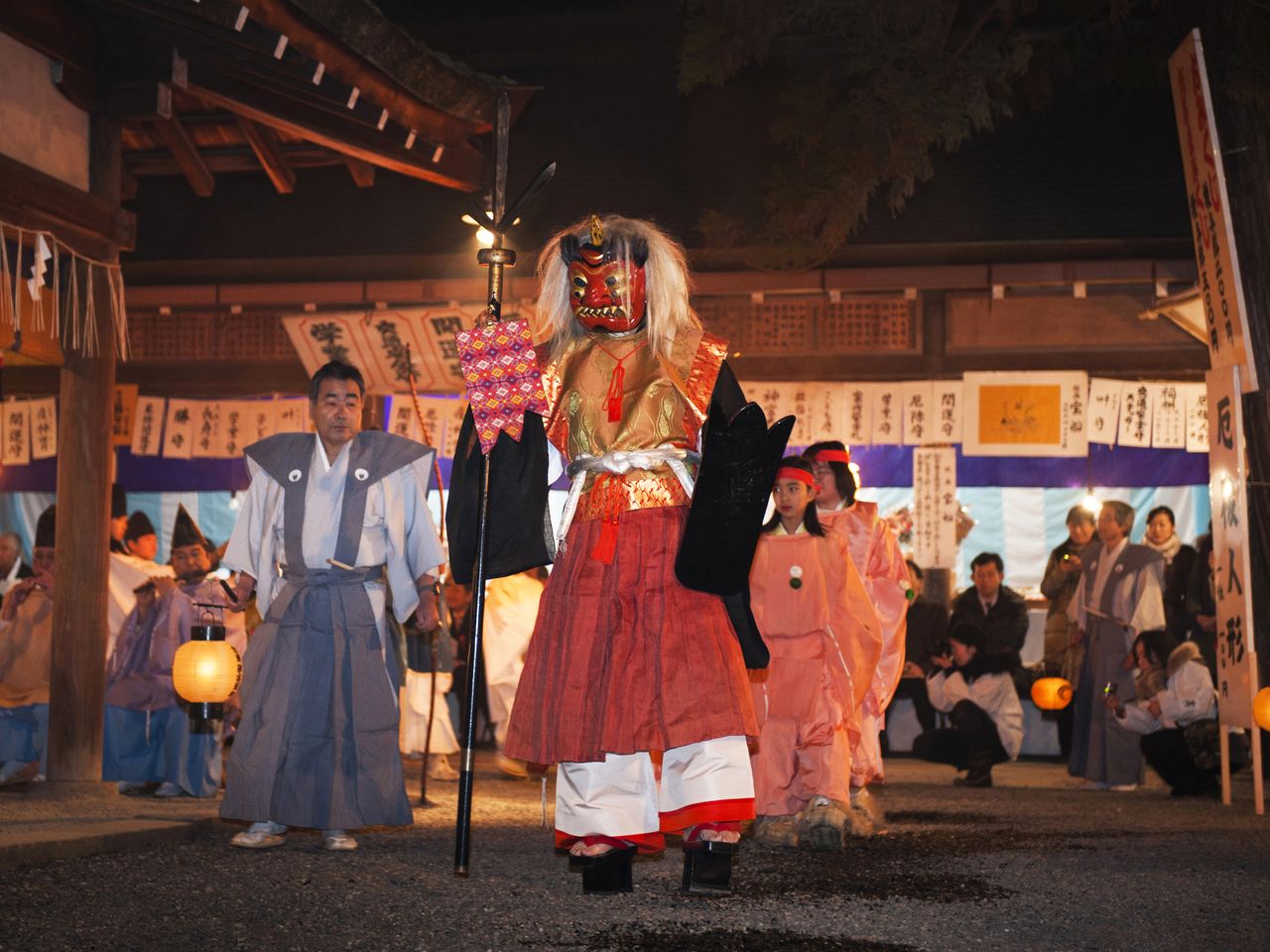 Hōsōshi, said to be a devil-god from ancient China, with four golden eyes and two horns. 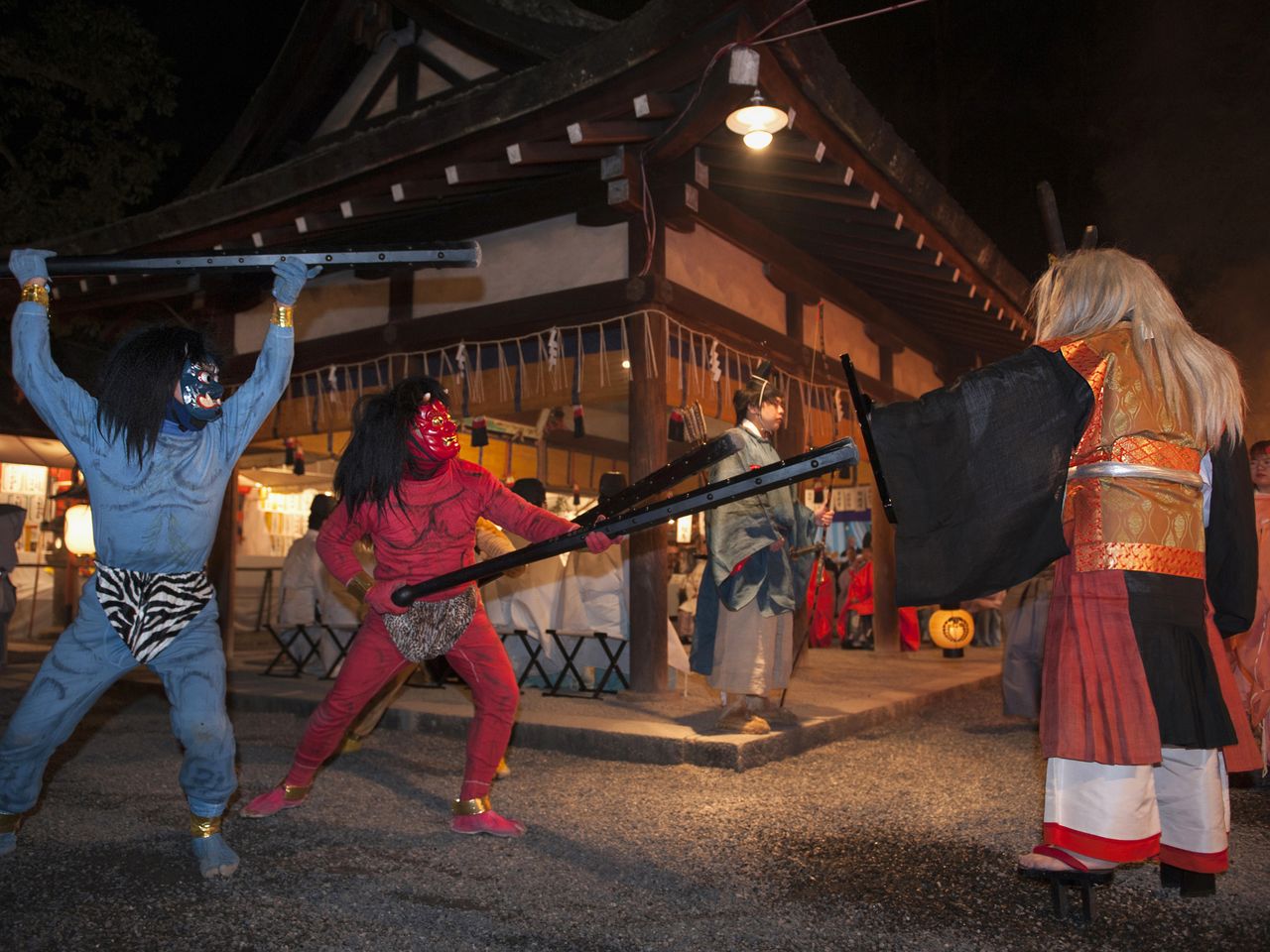 Hōsōshi battles the oni with pike and shield. 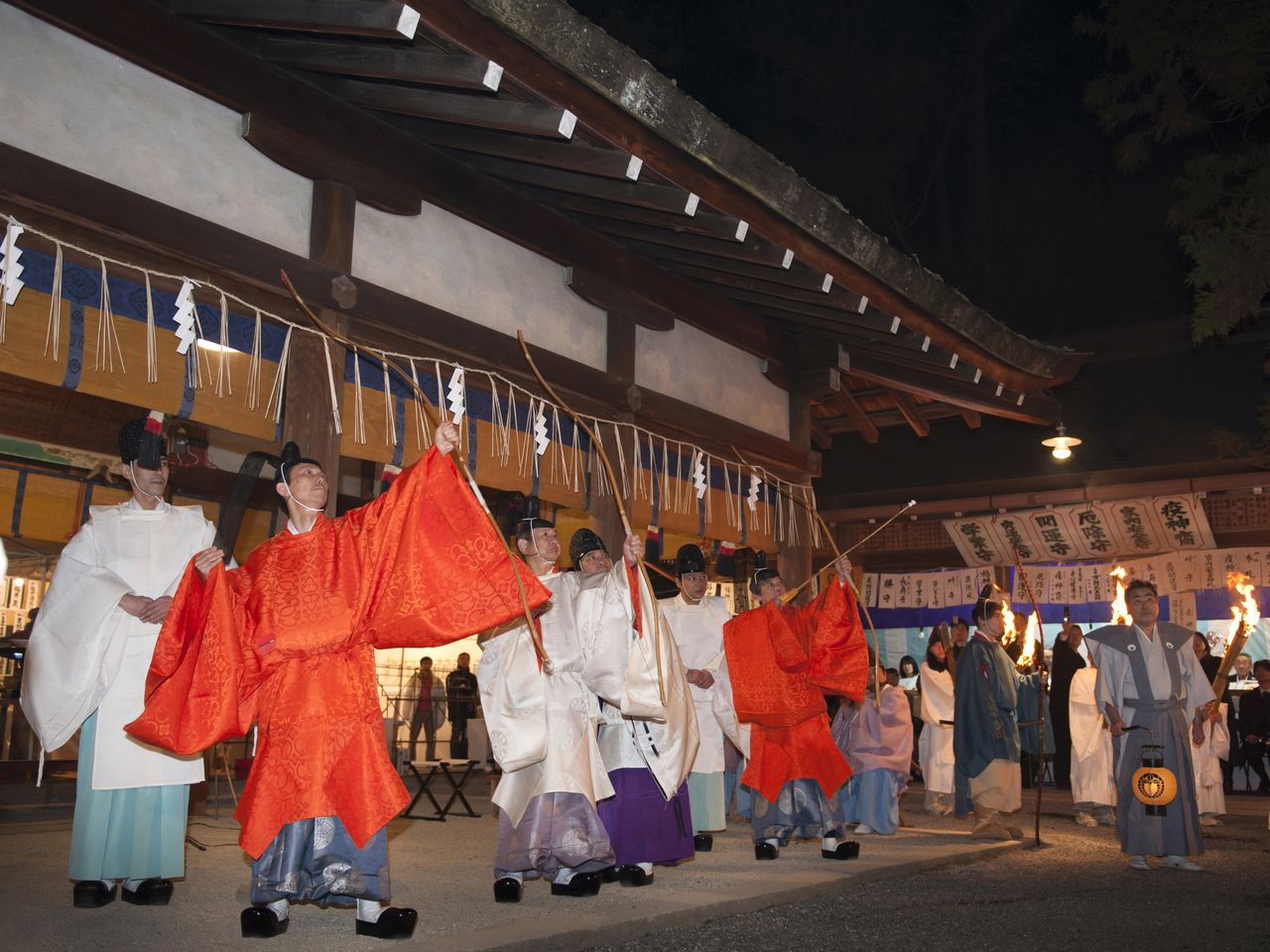 The tsuina ritual ends with aristocrats letting fly with arrows.

Another well-known Kyoto Setsubun ritual is karosai, which begins at 11:00 pm on February 3. A large fire pot is set up in front of one of the torii gates, and visitors bring their old good-luck charms and scrolls, which are burned so that the spirits in them can be released, or so it is said. 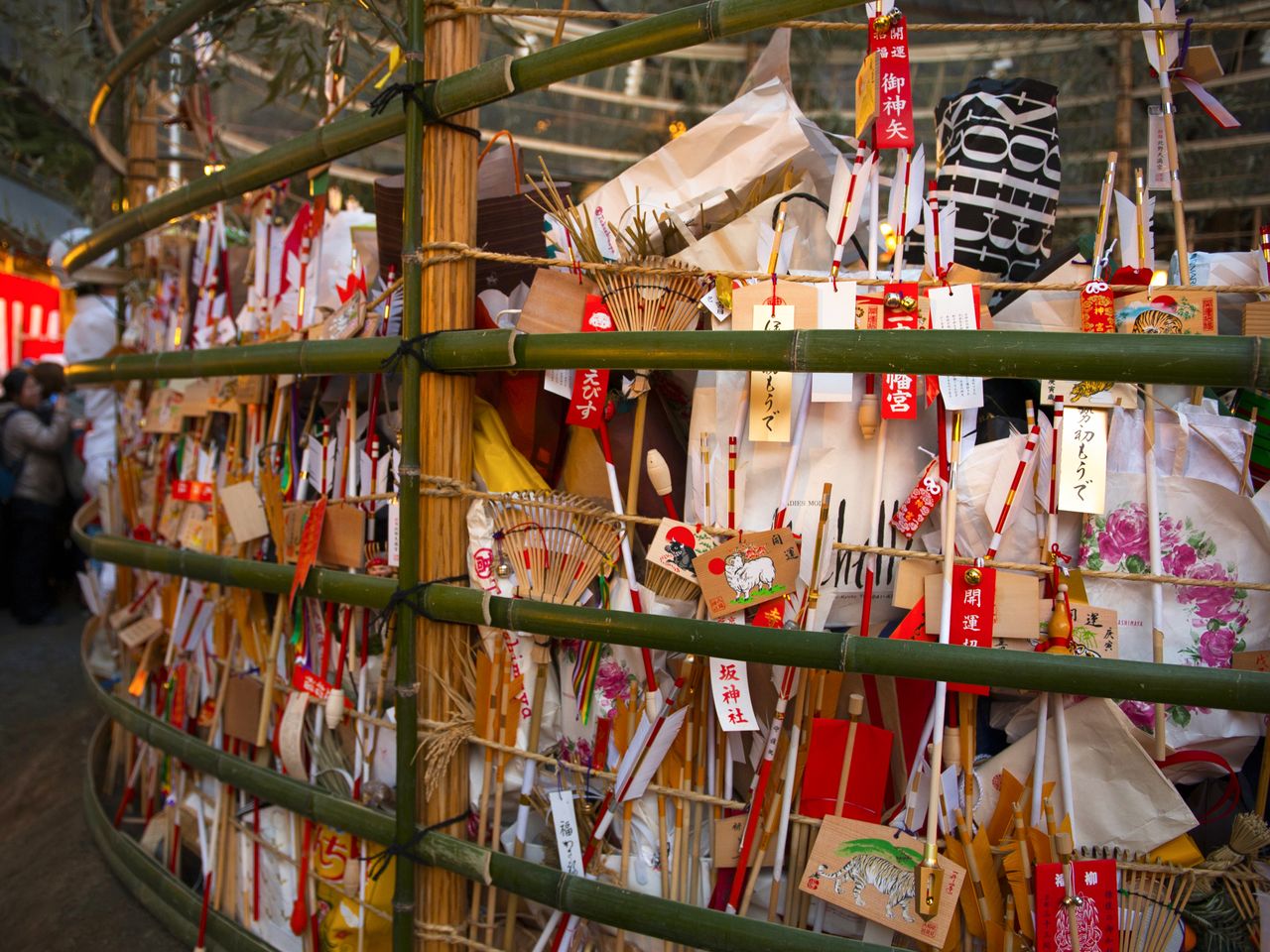 The fire pot is filled with old scrolls and charms brought by visitors to be burned. 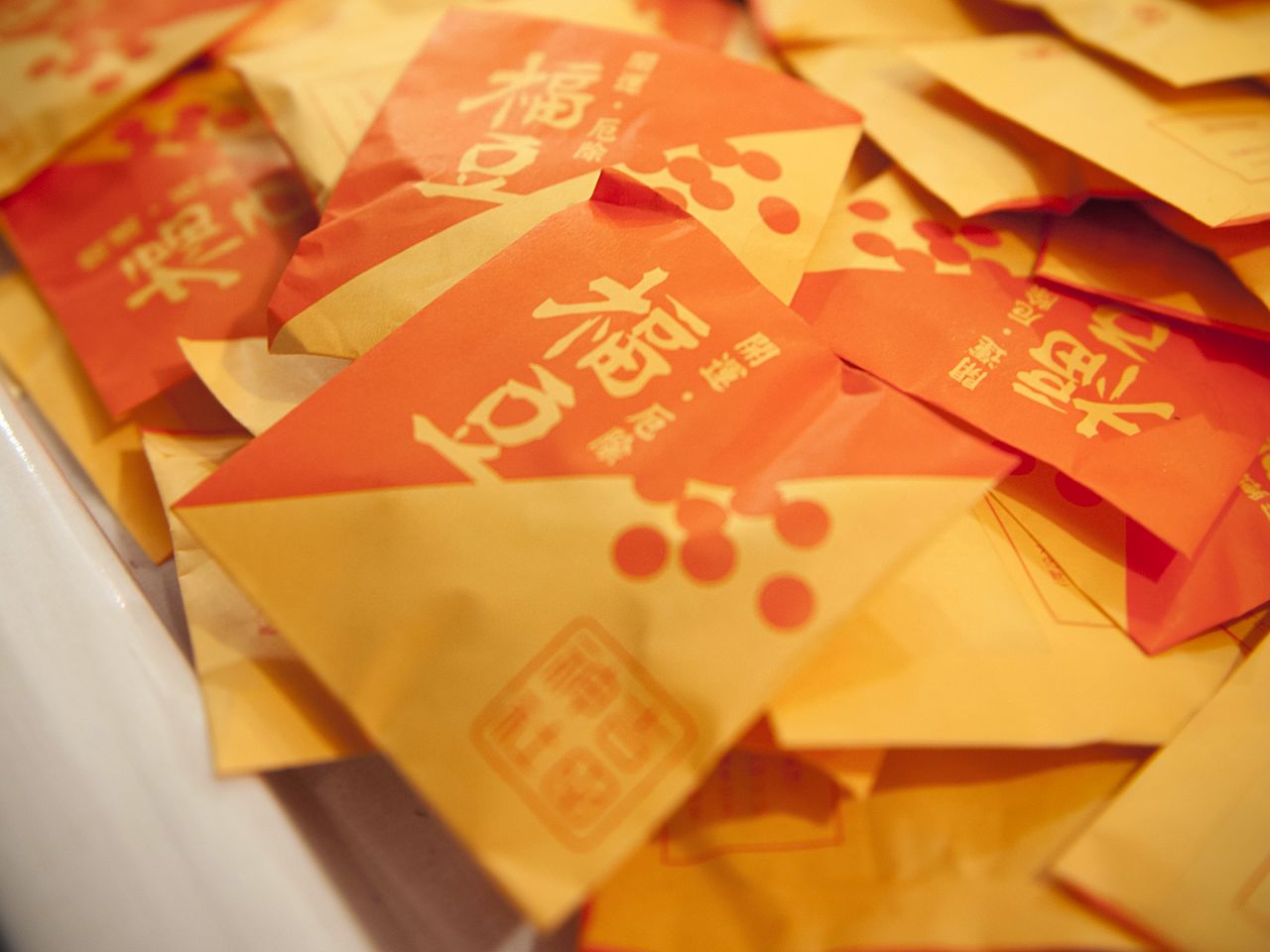 Fuku-mame (dried beans used in mame-maki) are sold in ¥200 packs at Yoshida Jinja.

Another popular Setsubun ritual with oni is the tsuinashiki oni hōraku (oni exorcism dance), or the oni-odori (devil dance), at the temple Rozanji in Kyoto’s Kamigyō-ku. 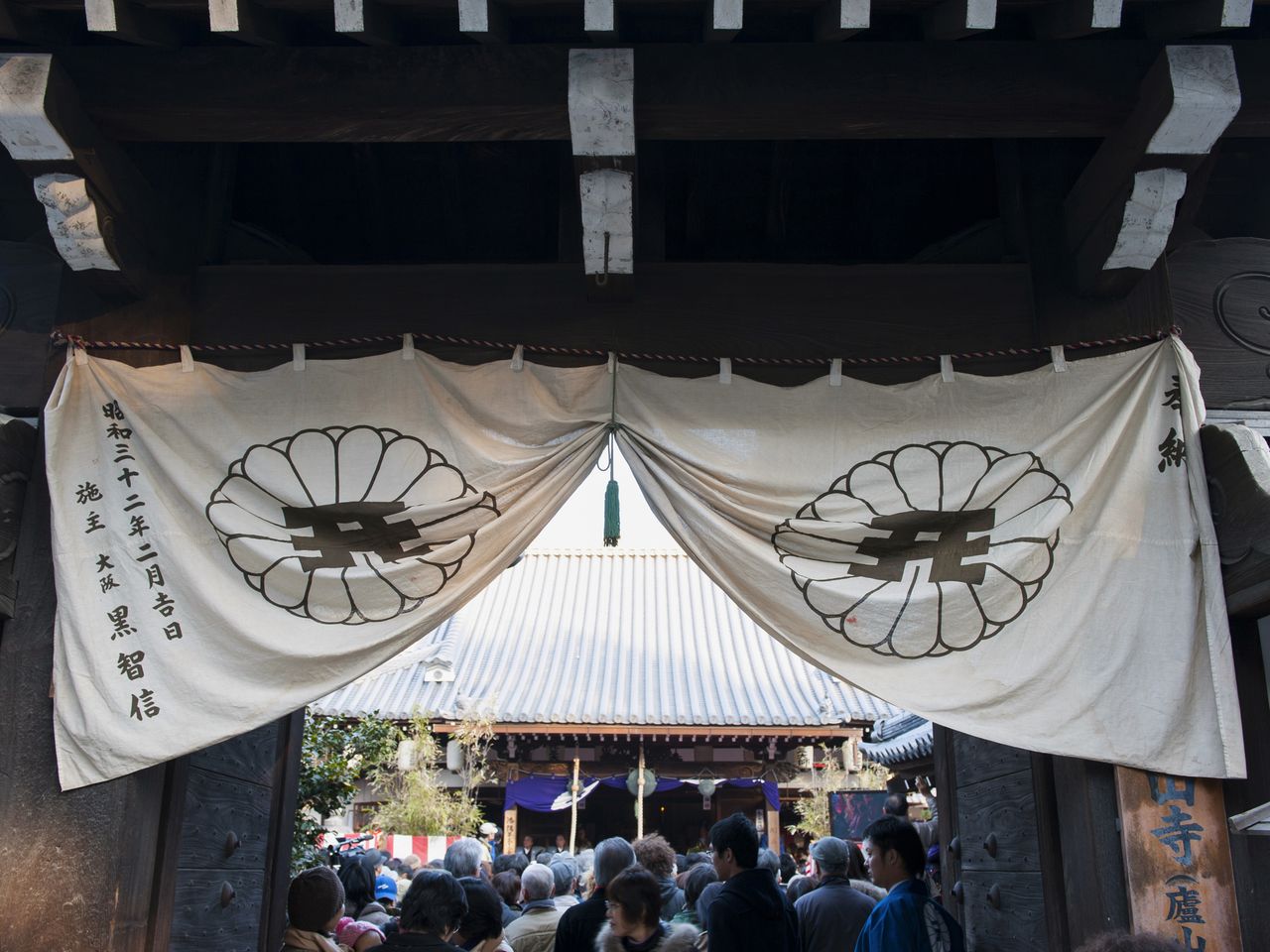 At 3:00 pm on February 3, the ceremony begins with red, green, and black oni, representing manifestations of the three poisons of people in Buddhism—greed, ill will, and confusion—coming out onto a specially built stage in front of the great hall of the shrine to the sounds of taiko drums and conch shells. The red oni bears a torch and sacred treasured sword, the green oni a great axe, and the black oni a maul. All three dance impressively, striding heavily as they enter the hall. There they interfere with the conduct of gomaku, prayers for good luck accompanied by burning incense. Ultimately, however, they are dispelled by the power of the goma Dharma and the blessed bow of the tsuinashi, the priest in charge of exorcisms. When the oni are gone, the monks and fuku-musume (Shintō serving girls who sell good-luck charms) commence the mame-maki, and the visitors are also treated to beans and mochi rice cakes. 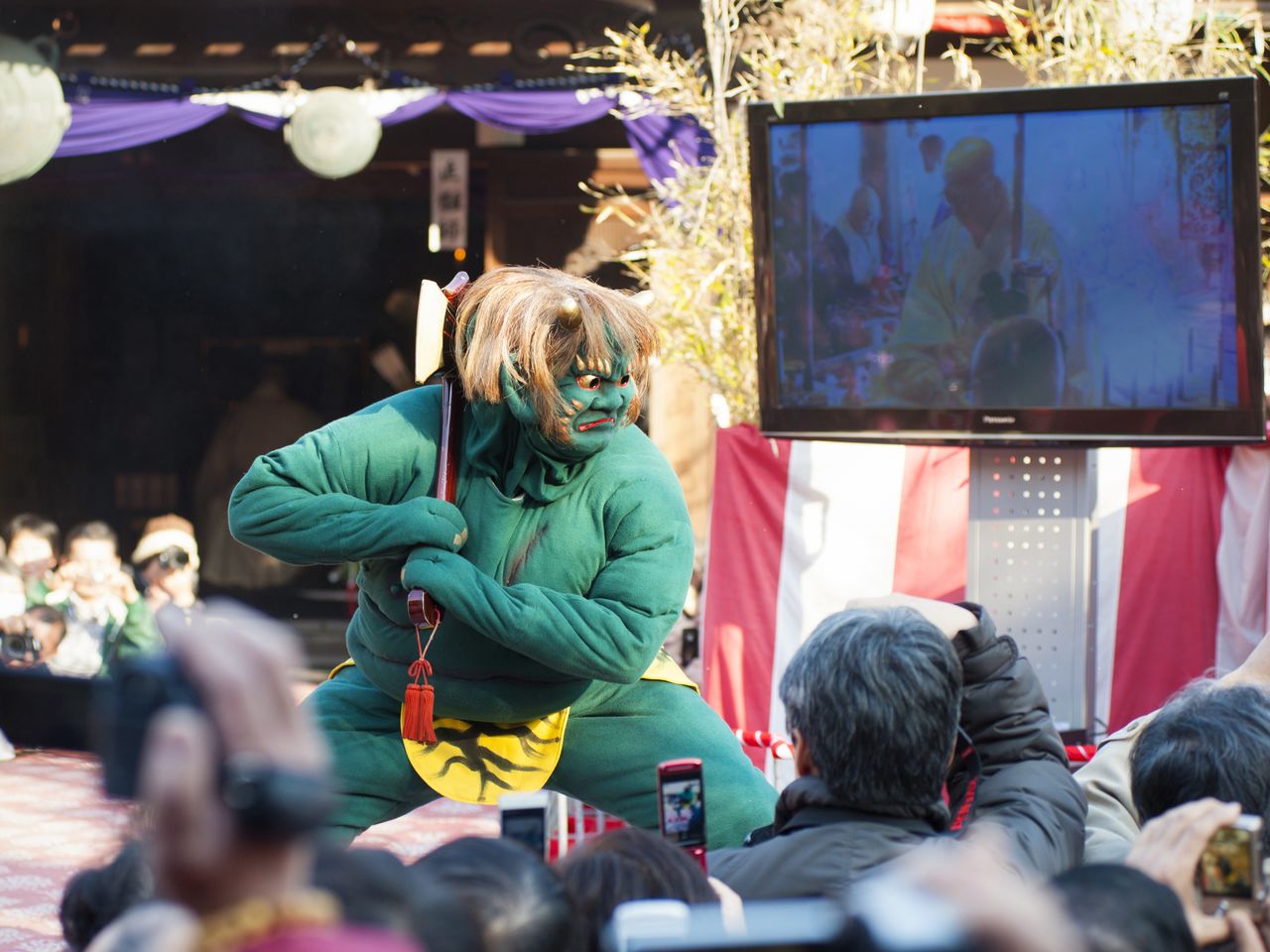 The green oni dances, shouldering a maul and stomping around. 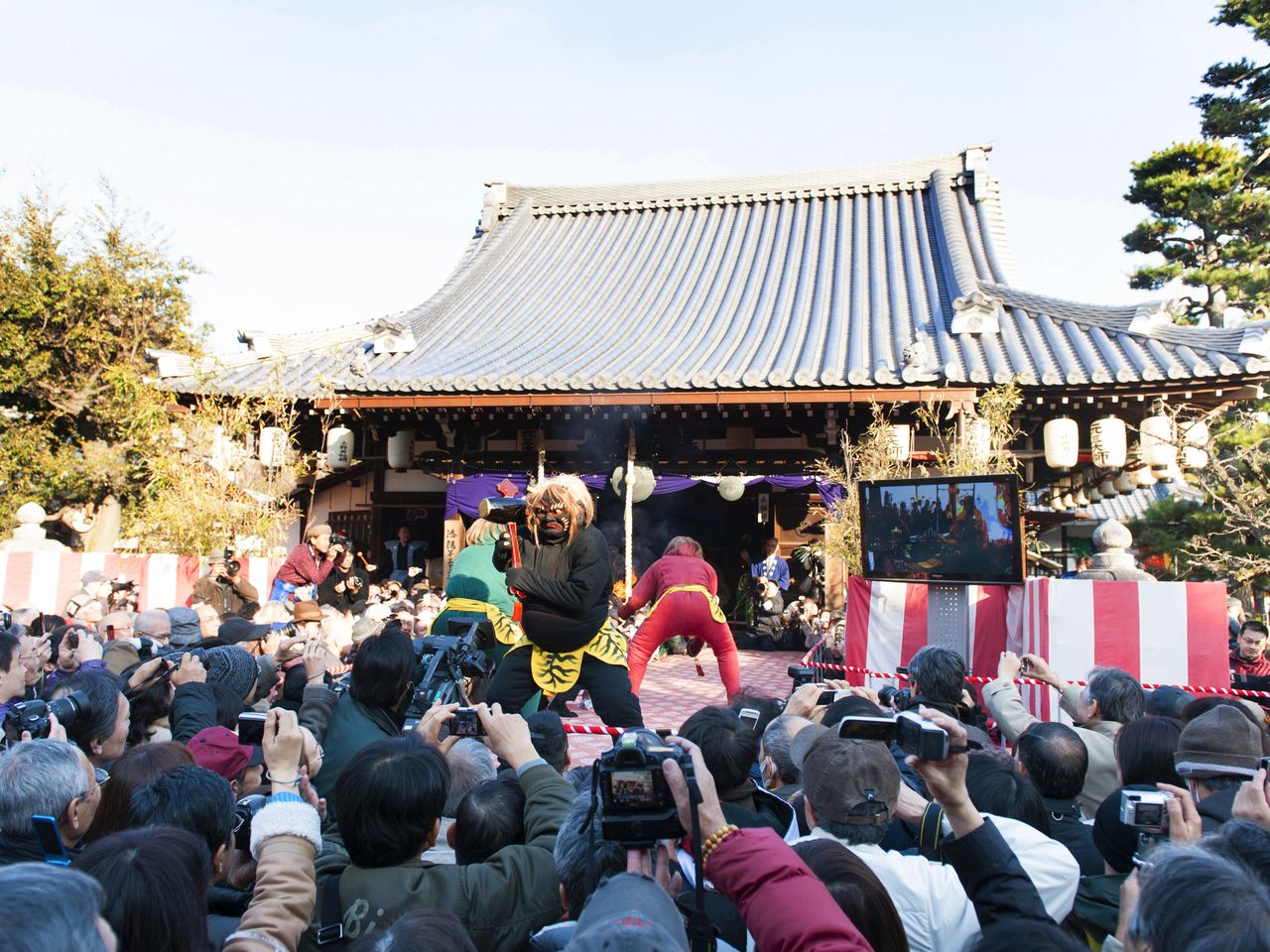 The stage where the oni hōraku ritual takes place is surrounded by eager crowds with their cameras. 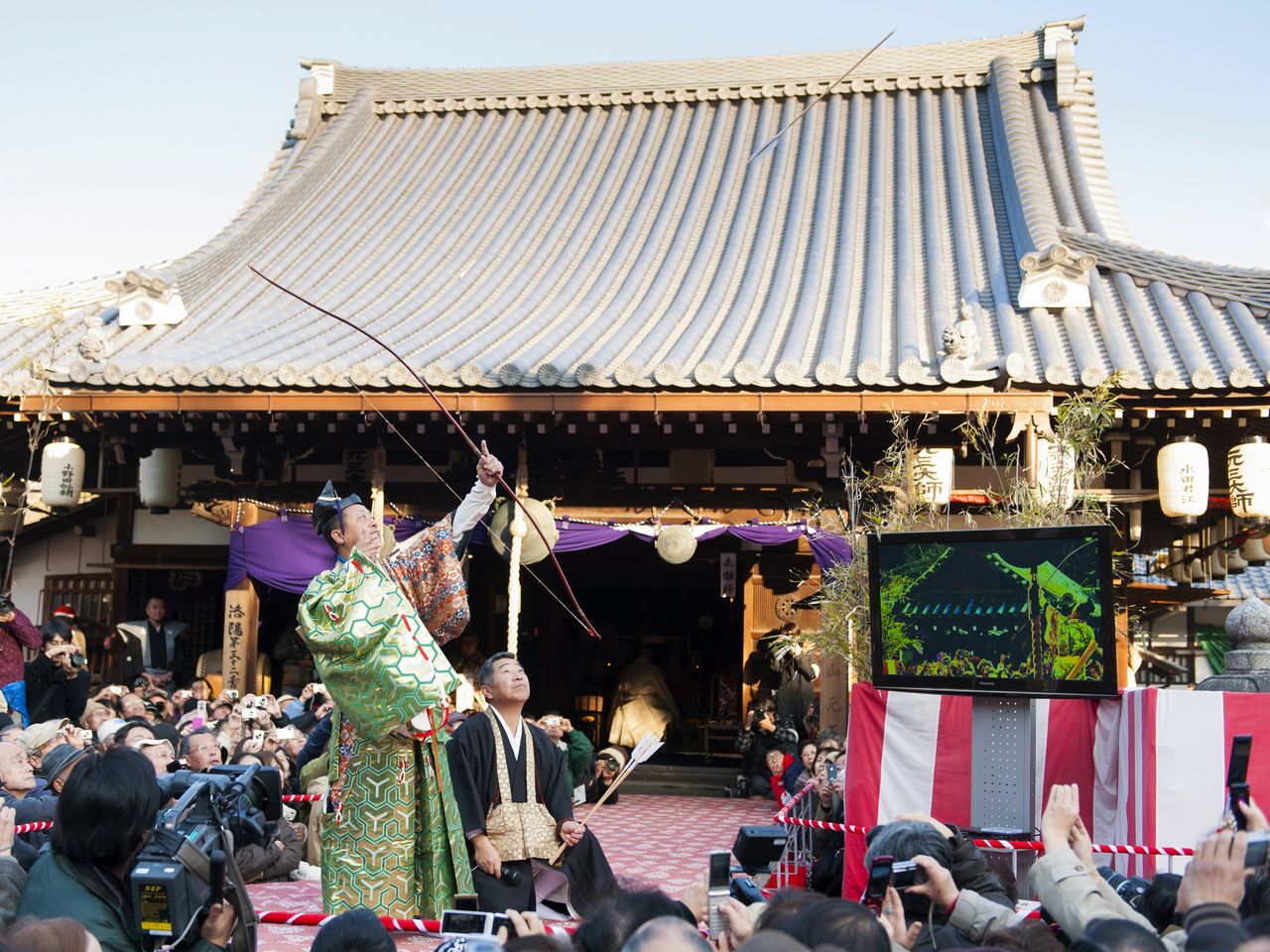 The tsuinashi exorcist shoots his bow with a prayer to the five dai-myōō, the Deva kings of Buddhism who reign over north, south, east, west, and center. 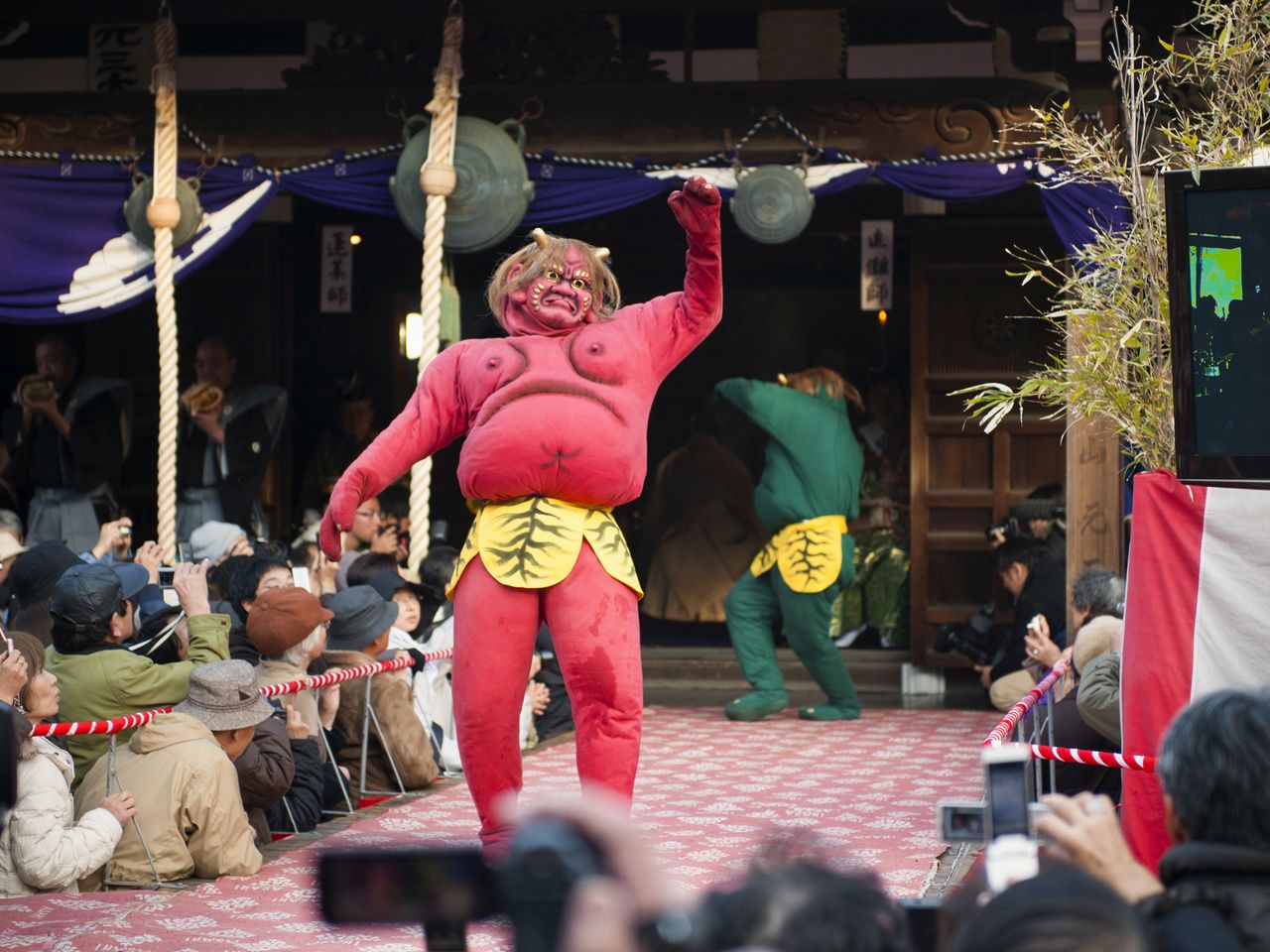 The oni emerge from the hall in agony, dispelled, bringing the oni hōraku to an end.

Mame-maki with Maiko and Geiko

Another ritual, with a festive atmosphere in stark contrast to the others, is the Setsubunsai at Yasaka Jinja shrine. Known affectionately as Gion-san, the event takes place February 2 and 3 in the dance pavilion on the shrine grounds. Here, maiko (dancing girls) and geiko (girls in training to become geisha) from the four entertainment districts of Kyoto enter in full kimono dress. After their graceful devotional dances, the participants commence mame-maki, with the onlookers trying to catch the beans tossed their way, a scene which has become a distinctive feature of Setsubun in Kyoto. Traditional song and dance troupes from the aforementioned entertainment districts put on their own separate performances, for a total of four shows of mame-maki by maiko and geiko over the course of the festival. There are other rituals and mame-maki during this period as well, including bugaku (traditional Japanese court music and dance), imayō traditional poetry, taiko drums, and shishimai lion dances, so plan ahead. 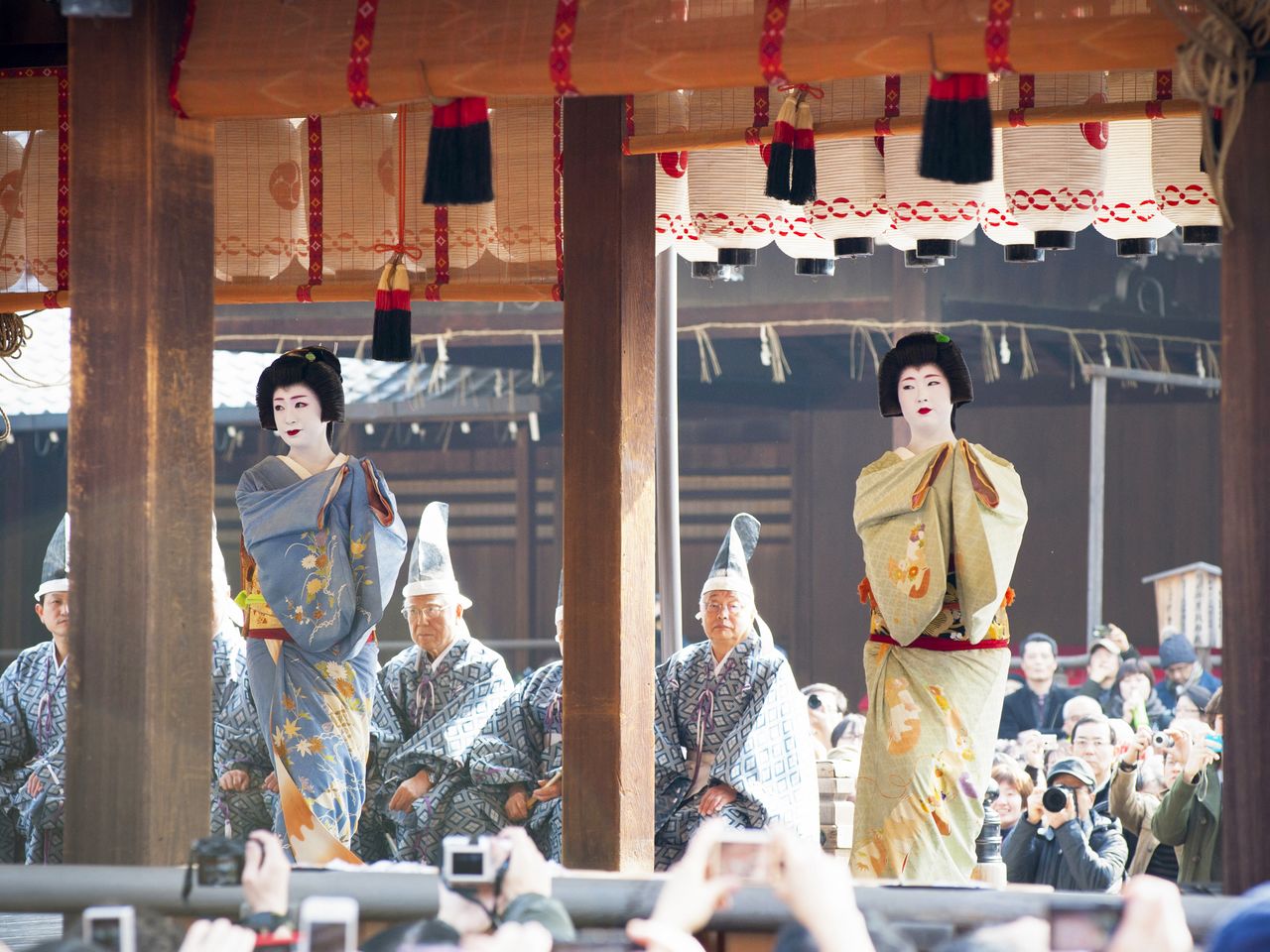 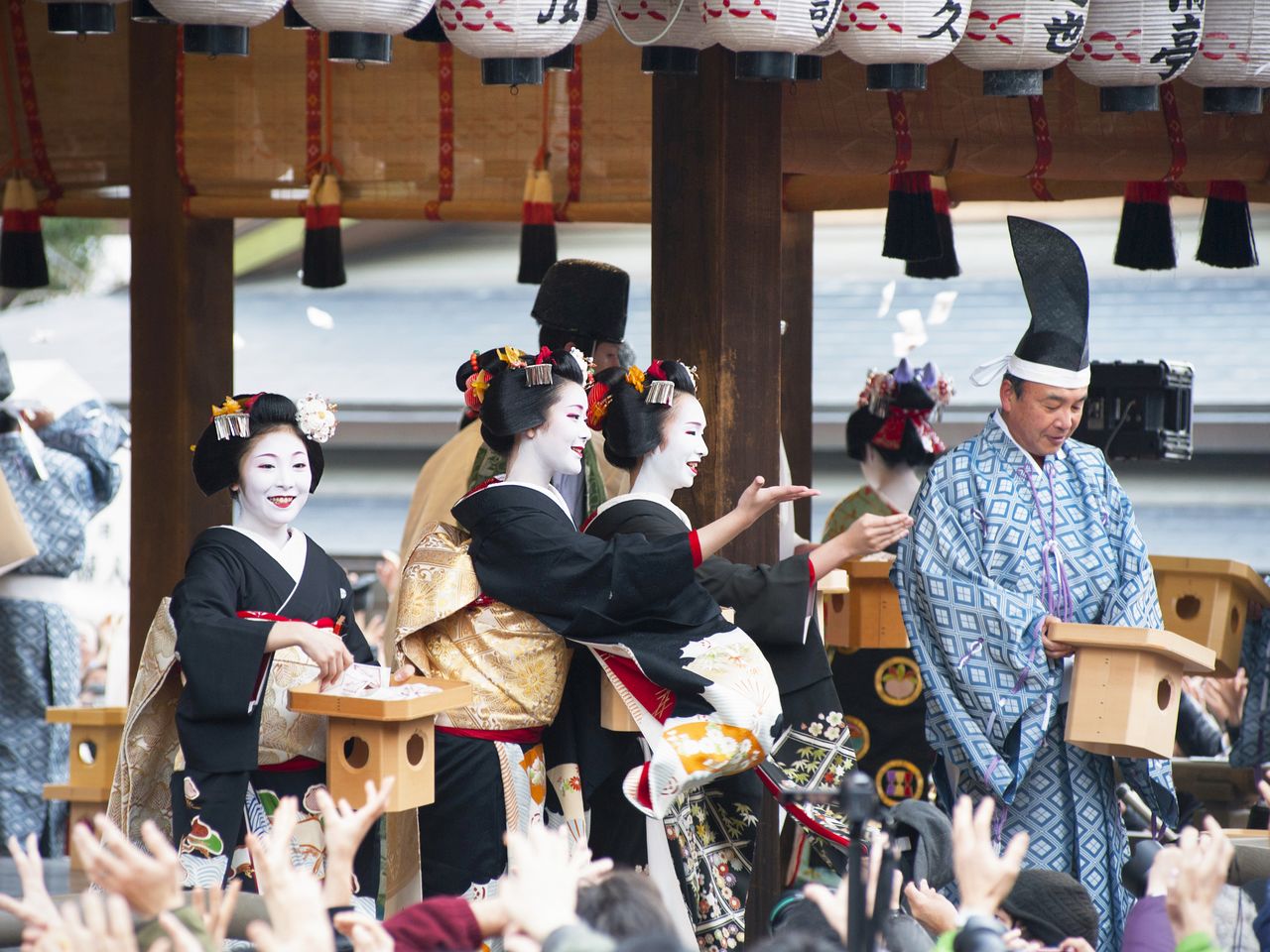 Onlookers try to catch the beans cast by the maiko. 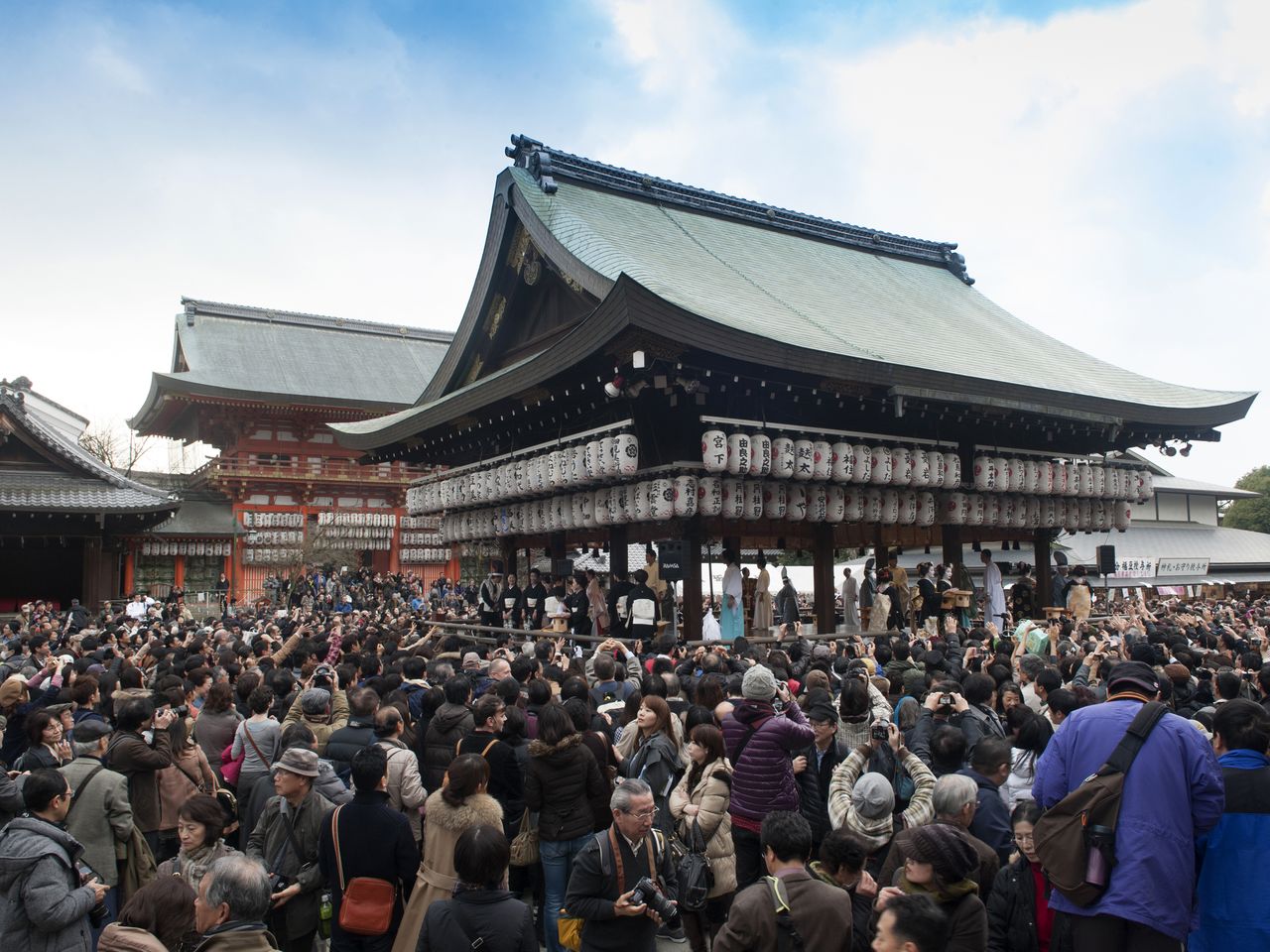 The dancing pavilion is surrounded by crowds of visitors. 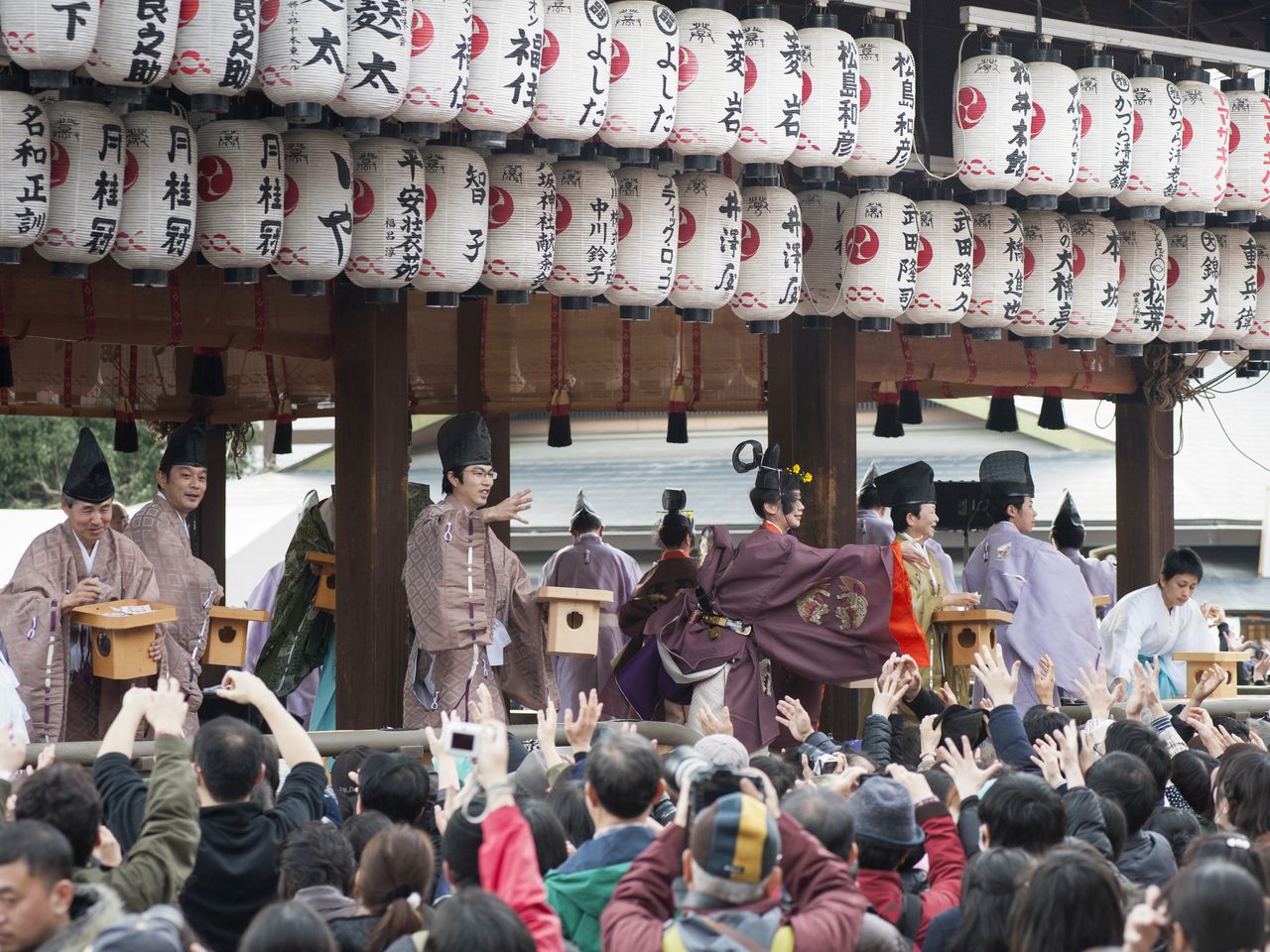 Another popular performance is mame-maki by Yasaka Gagaku Kai, a troupe that makes devotions through performances of traditional music and dance.