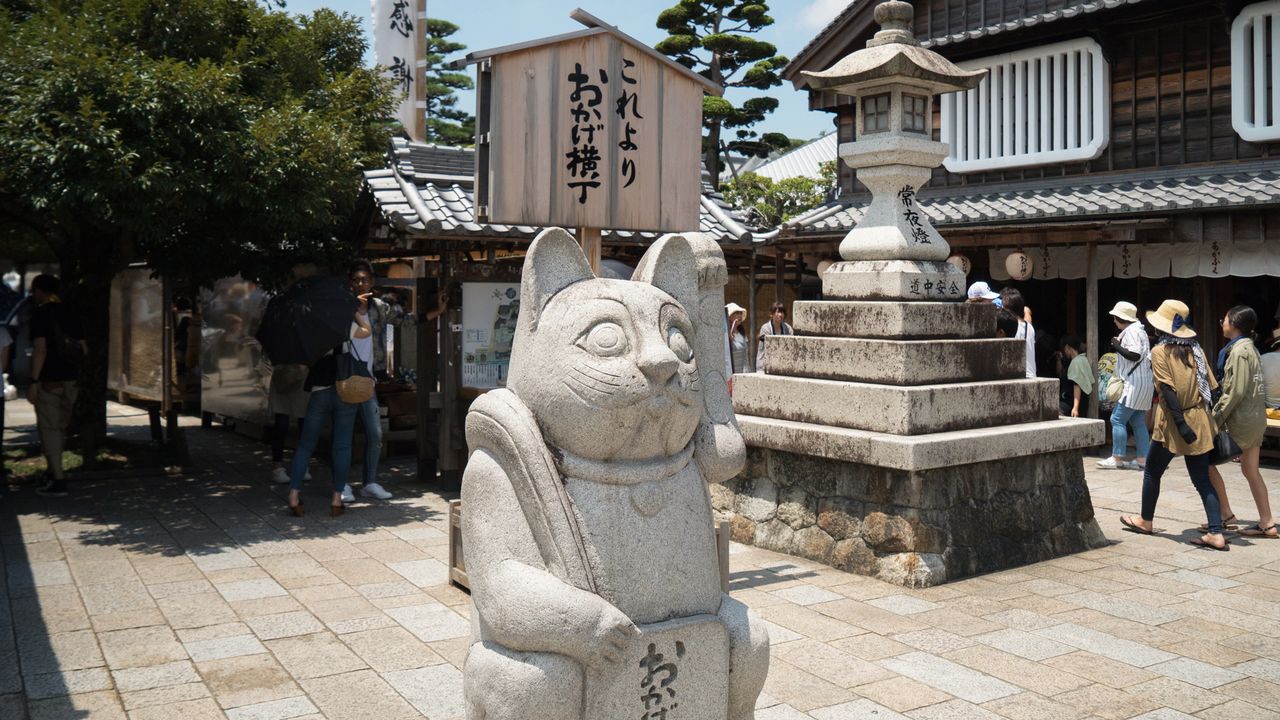 May 23, 2019
Since 1993, the Okage-yokochō area at Ise Shrine has been a haven for food-loving tourists visiting the Mie Prefecture destination.

The area known as Oharaimachi extends from near Uji Bridge at Ise Shrine’s Naikū (the Inner Shrine) in the city of Ise, Mie Prefecture. The heart of this area is Okage-yokochō, a recreation of the Ise-ji road as it might have been during the Edo period (1603–1868) and the Meiji era (1868–1912). This stretch of businesses near the original Akafuku mochi (rice cake) shop offers a taste of the local flavor of the place and the period, with souvenir stalls, restaurants, cafes, and other buildings open to the public.

Related article › A Year in the Life of Ise Shrine (Photos) 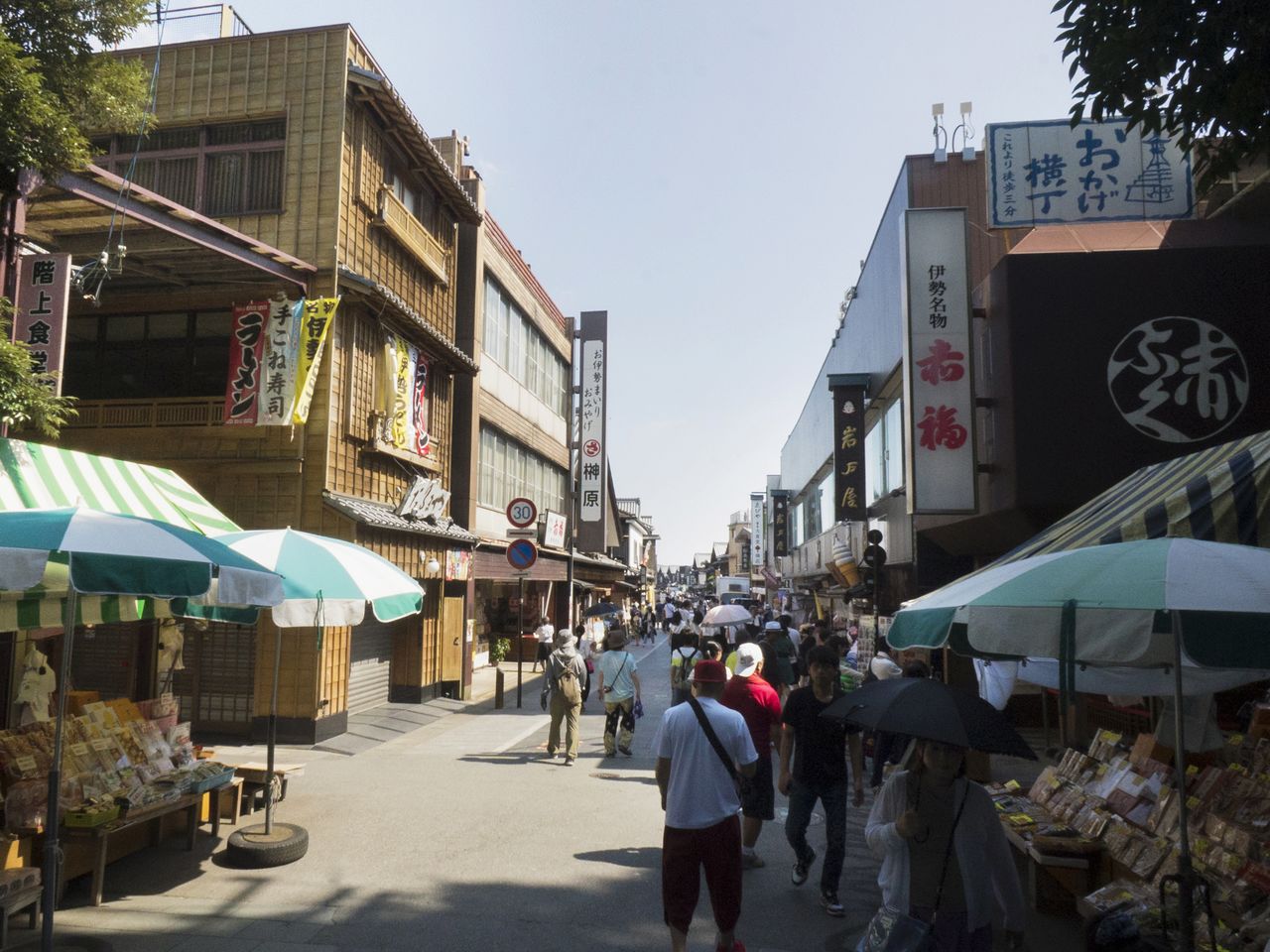 Leaving the Naikū (Inner Shrine) area for Oharaimachi. At upper right is a sign indicating that Okage-yokochō is a three-minute walk from this location.

Akafuku mochi, the Taste of Ise

The one thing that visitors simply must try at Okage-yokochō is Akafuku mochi. These rice cakes have brought fame not only to Ise, but the whole Tōkai region, where Ise is located. The original Akafuku shop, where these mochi were invented, stands just across Oharaimachi-dōri to the east from the main entrance to Okage-yokochō. This entrance location is marked by a stone statue of a manekineko (beckoning cat). The current storefront is a wooden construction built in 1877 using a traditional Ise-area gabled roof architectural style, and sports a distinctive, wide-open street frontage. 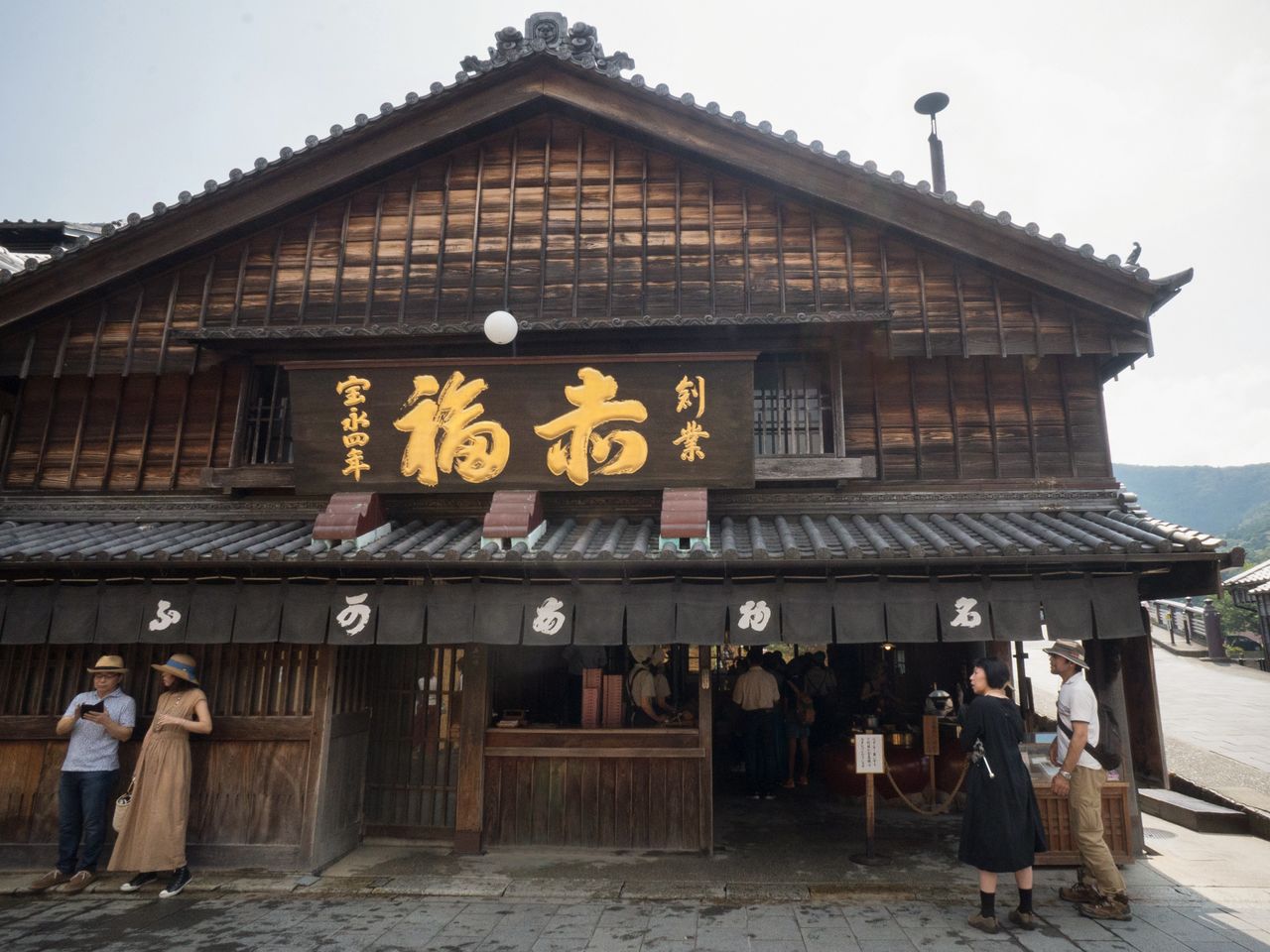 The original Akafuku shop gives off an air of its history. 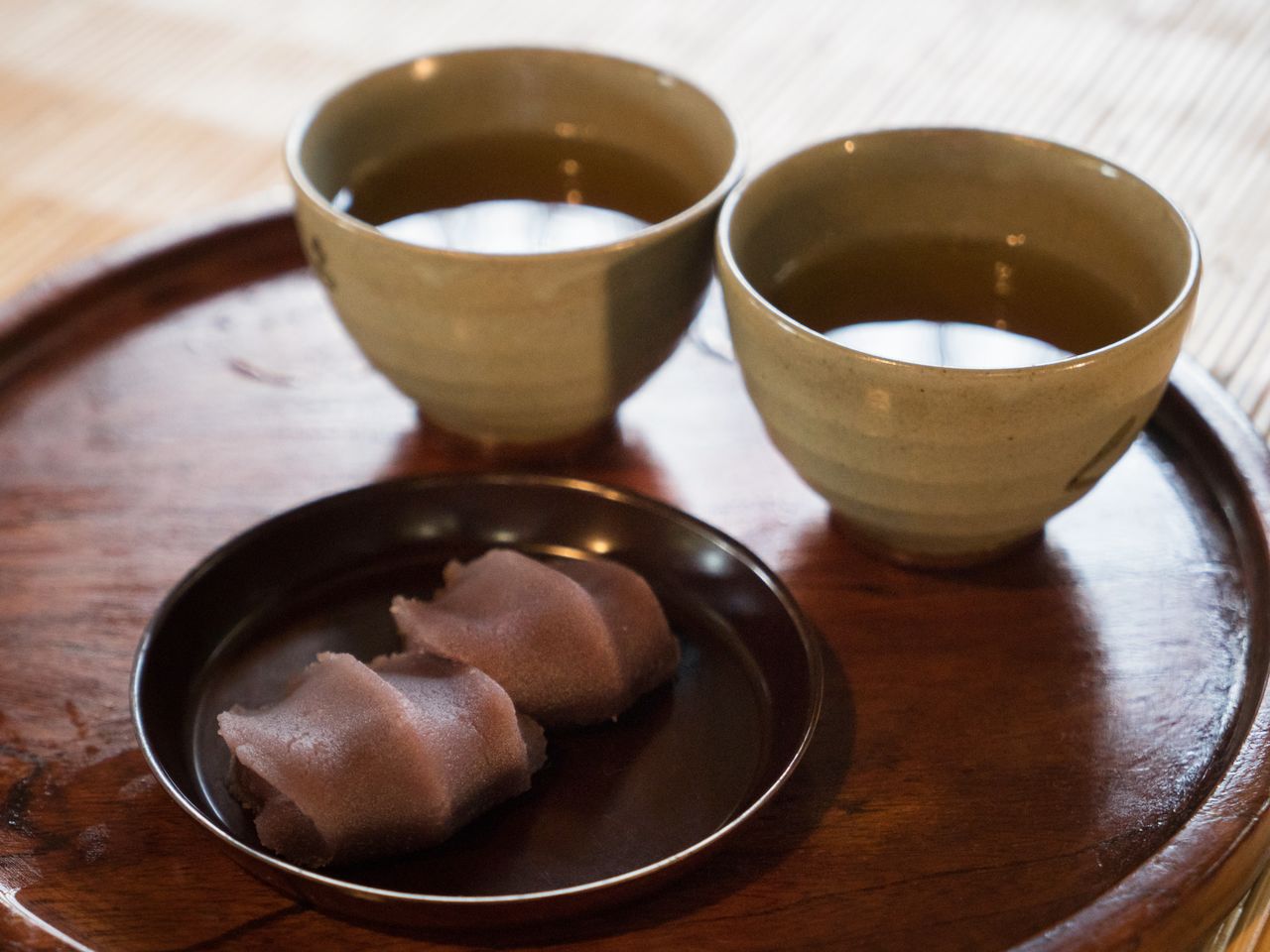 Akafuku mochi rice cakes, wrapped in koshi-an bean jam. Here the mochi are served with cups of bancha (coarse Japanese tea), for eating on the premises.

Fresh-made Akafuku mochi are sold on the spot at both the original shop and its direct sales outlets, and can be eaten in the restaurant or taken and eaten elsewhere. Visitors can also watch the craftspeople making the Akafuku mochi on the premises. A serving tray of two Akafuku mochi with two cups of bancha (coarse Japanese tea) costs ¥210. Made with Ise-cha, a variety of tea native to the Ise region, bancha is brewed in pots on the premises with riverbed water drawn from the Isuzu River, which flows under the Uji Bridge. Another storefront across the street has other popular offerings for sale: Akafuku Shave Ice from mid-April to October, and Akafuku zenzai (a thick bean soup with rice dumplings) from early October through early April. 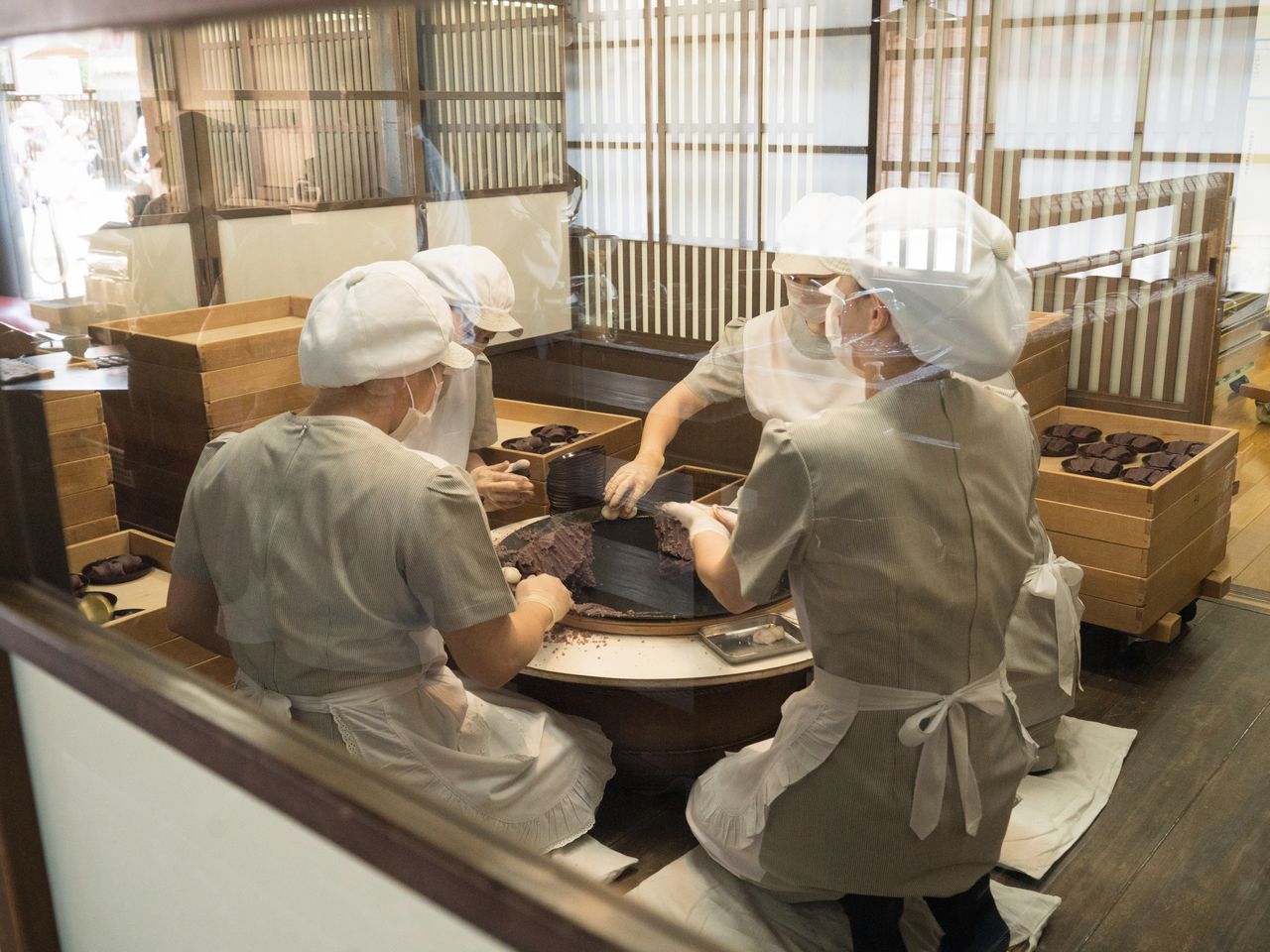 Visitors can watch the craftspeople making the mochi by hand. 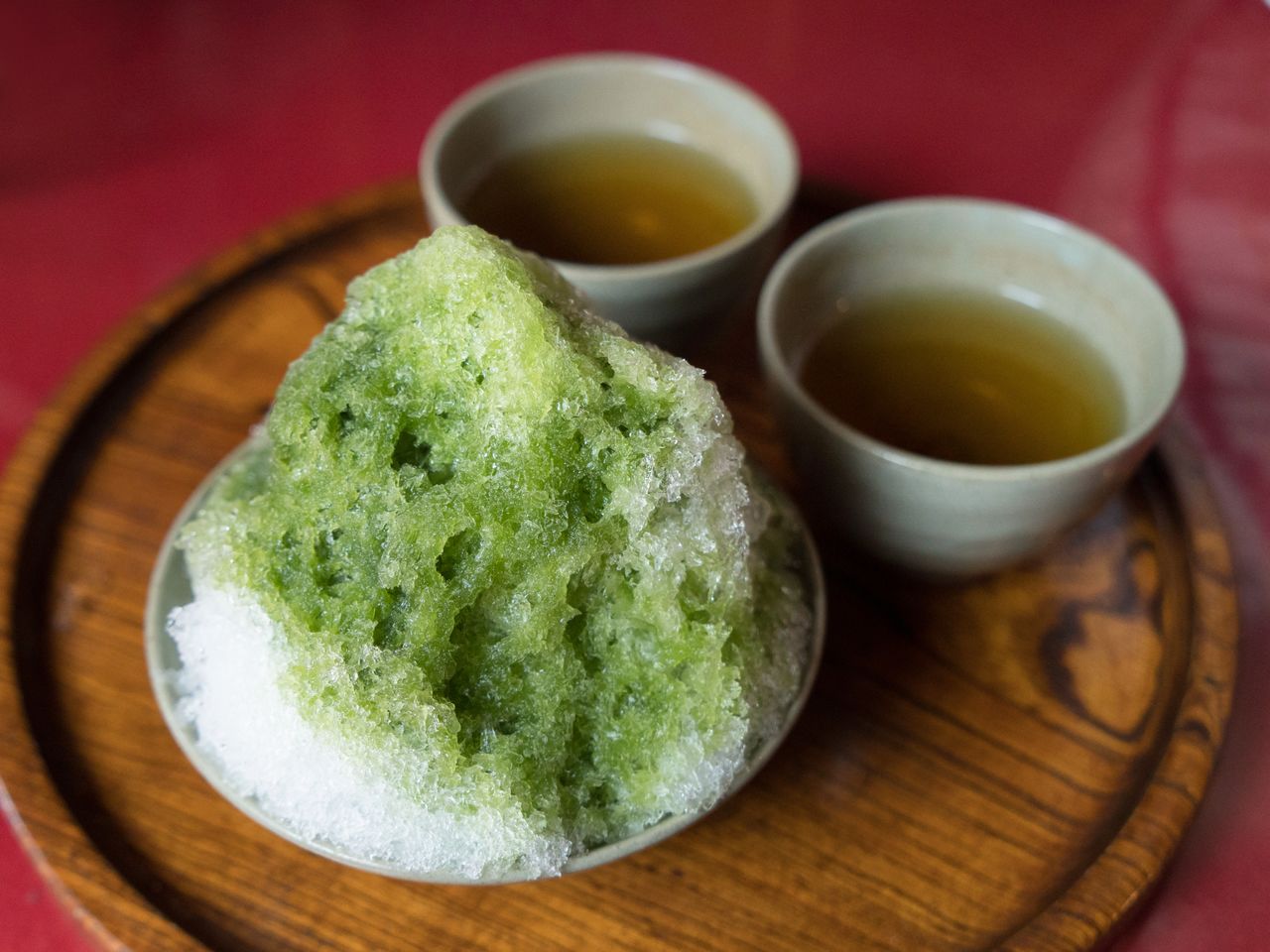 Tekone-zushi refers to a local dish said to originate with Ise-area fishermen, who supposedly would have it as a meal when they were out on the water. Sushi-kyū, the most popular restaurant in Okage-yokochō, serves bonito pickled in soy sauce on rice made with a local brand of vinegar. The elegant building is made with materials recovered from Uji Bridge that were made available on the occasion of the rebuilding and rededication of the shrine in 1869.

Tekone-zushi combines the hearty mouthfeel of bonito with the refreshing taste of the vinegared rice to good effect. Another popular dish is hitsumabushi, in which domestically farmed eels are cut into strips, broiled, and served over rice. 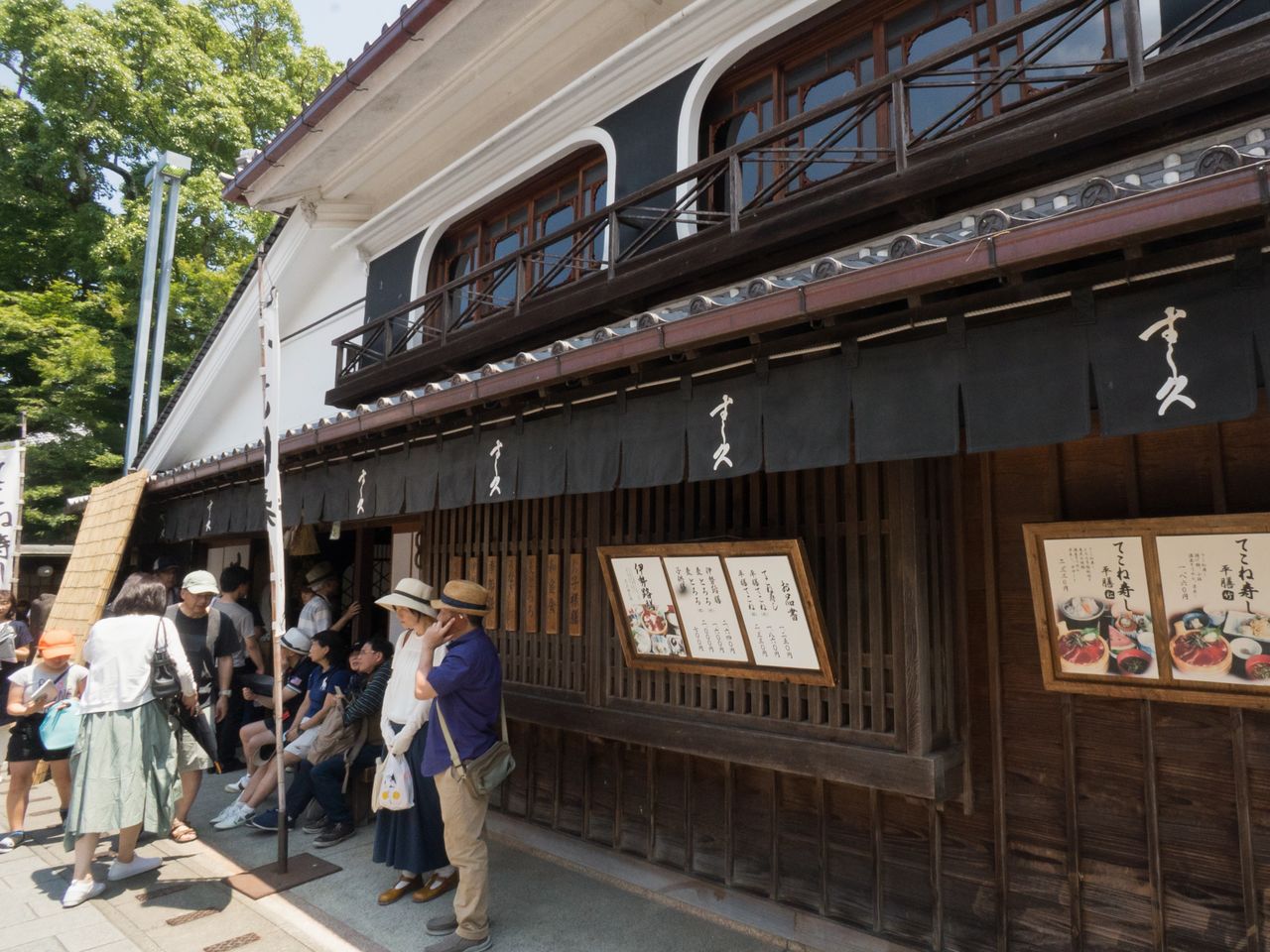 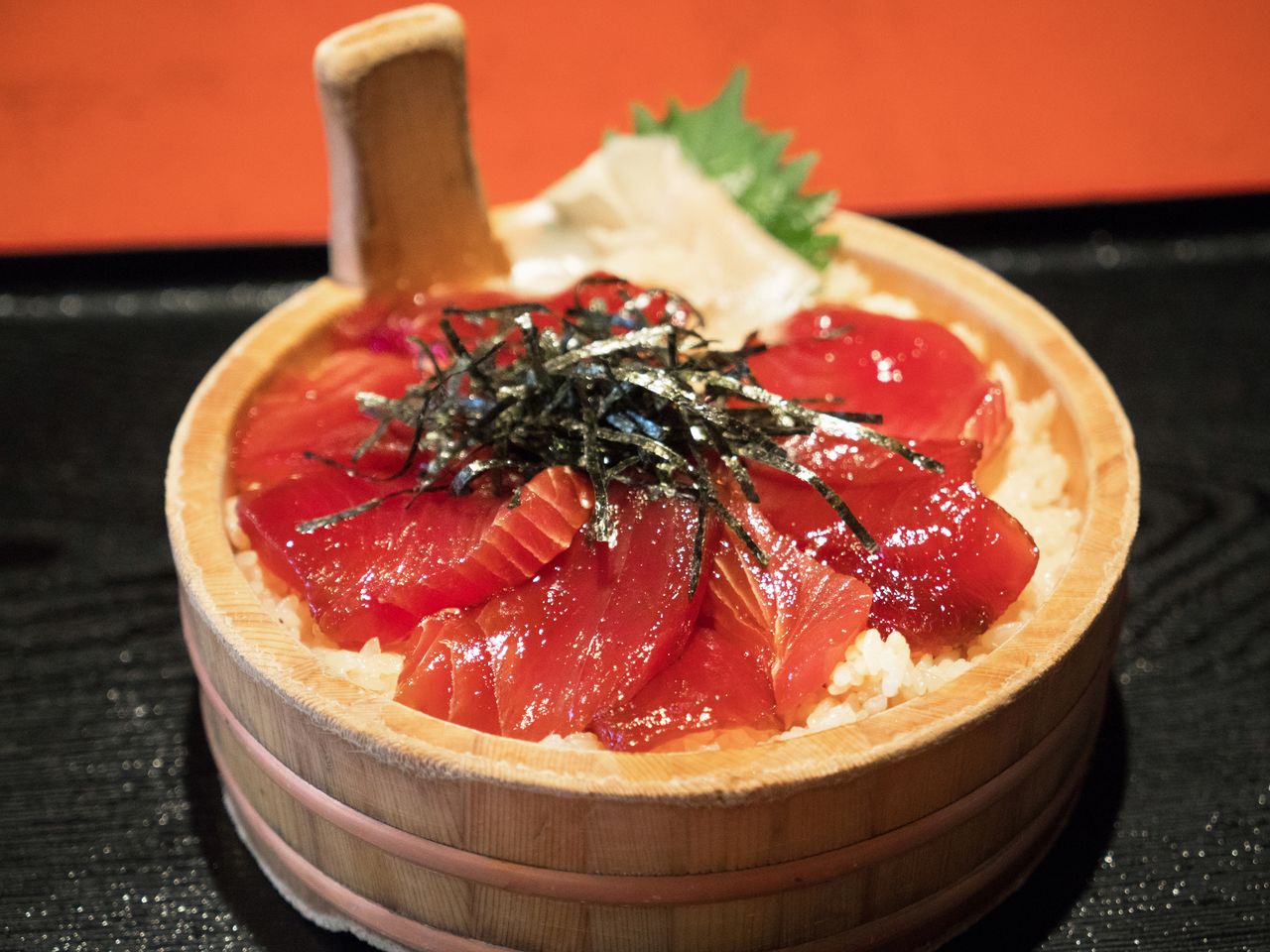 Tekone-zushi, served in a te-oke, a wooden serving dish shaped like a ladle.

Another attraction of Okage-yokochō is its extensive variety of “B-grade cuisine,” inexpensive and satisfying food that lends itself to snacking by pilgrims while they walk around the grounds. There is also an area near the taiko-yagura (drum turret) in the center, where eating and drinking is permitted. It is recommended that visitors sit there and savor the food that they have bought once they have walked sufficiently around the shrine area. 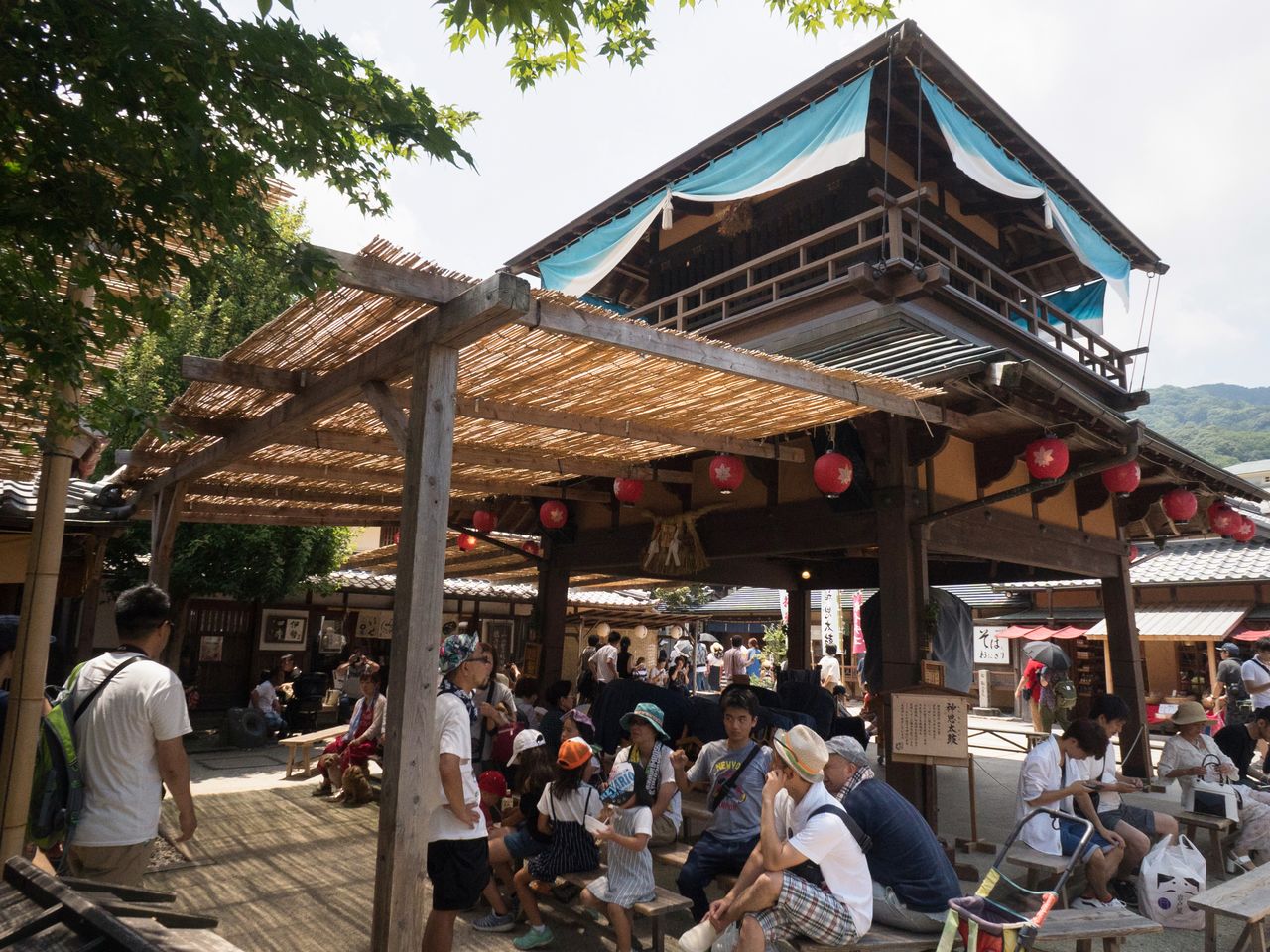 Benches are installed around the drum turret.

Yokochō-yaki (¥160), made with honey-flavored batter.

Yokochō-yaki is a baked snack patterned on an image of Ebisu Daikoku, a god of luck. The aromatic honey-flavored batter is filled with tsubu-an (coarse sweet red bean paste) made with azuki beans from Hokkaidō’s Tokachi district. Another popular product is imo-an (sweet potato paste), a seasonal specialty.

Ise-takuan is a type of pickled radish long utilized as a preserved food by pilgrims to Ise Shrine. Denbei is a pickled food shop that maintains the taste and traditional preparation techniques of this food. Lightly salted cucumber on ice just looks cool and refreshing, and has a clean, clear taste.

Located near the north entrance of Okage-yokochō is the Ise Shōyu main shop, which sells sticky pudding (¥390) made with care using its signature Ise soy sauce. The full-bodied sweetness arising from the firm’s soy sauce and amakōji (a sweet aspergillus mold) is a treat for anyone with a sweet tooth.

Croquettes (¥100) are a standard offering at traditional butcher’s shops.

Buta-sute is a butcher’s shop founded in 1909 as a beef specialist. The name is said to derive from a man named Sutekichi who kept pigs, but a popular version of the story is that customers told him to drop the pork because the beef on offer was just too tasty, and he should stick with that. Their specialty croquettes are fried to a surprisingly light crunch, and the rich meat flavor spreads through the mouth with every bite.

This shop sells dango (rice dumplings) baked onsite, made with fine-quality rice powder from Japanese grain. The shop offers a variety of kinds of dango, of which the most recommended are the staple mitarashi-dango and the kuromitsu-dango (dark molasses dumplings) said to have been eaten in Ise from long ago. Fresh-baked mitarashi-dango has a springy mouthfeel and is coated in aromatic soy sauce.

Matsuzaka-gyūkushi beef on a stick (¥750), a popular offering from Dangorō-jaya, located near the drum turret.

Dangorō-jaya serves a flavorful soba (thin buckwheat noodle) dish, as well as donburi (a variety of dishes served in a bowl over rice) and onigiri (rice balls wrapped in seaweed). In summer this shop also sells desserts like the aforementioned Akafuku Shave Ice, and Akafuku zenzai in the winter. The shop’s Matsuzaka-gyūkushi (beef-on-a-stick), acclaimed for tasting richer with every bite, is perfect for snacking while walking.

The Crushed Jelly Fruit (¥420) looks as refreshing as it tastes.

Fruit Labo is a juice shop where the fresh fruit on offer has been personally selected by the manager’s expert eye. The shop’s Crushed Jelly Fruit dish, suitable for Instagram, has fruit jumbled beneath a serving of honey-lemon jelly, making for an invigorating taste.

Okage-yokochō offers other sites of interest besides restaurants. The manekineko (beckoning cat) statue sitting at the main entrance is a popular souvenir photograph spot. There’s Tsuboya, which is so atmospheric that one wouldn’t expect it to be a lottery ticket outlet. Visitors can also find a site for kami-shibai (narrated stories accompanied by illustrations), a target range, and even a go salon. 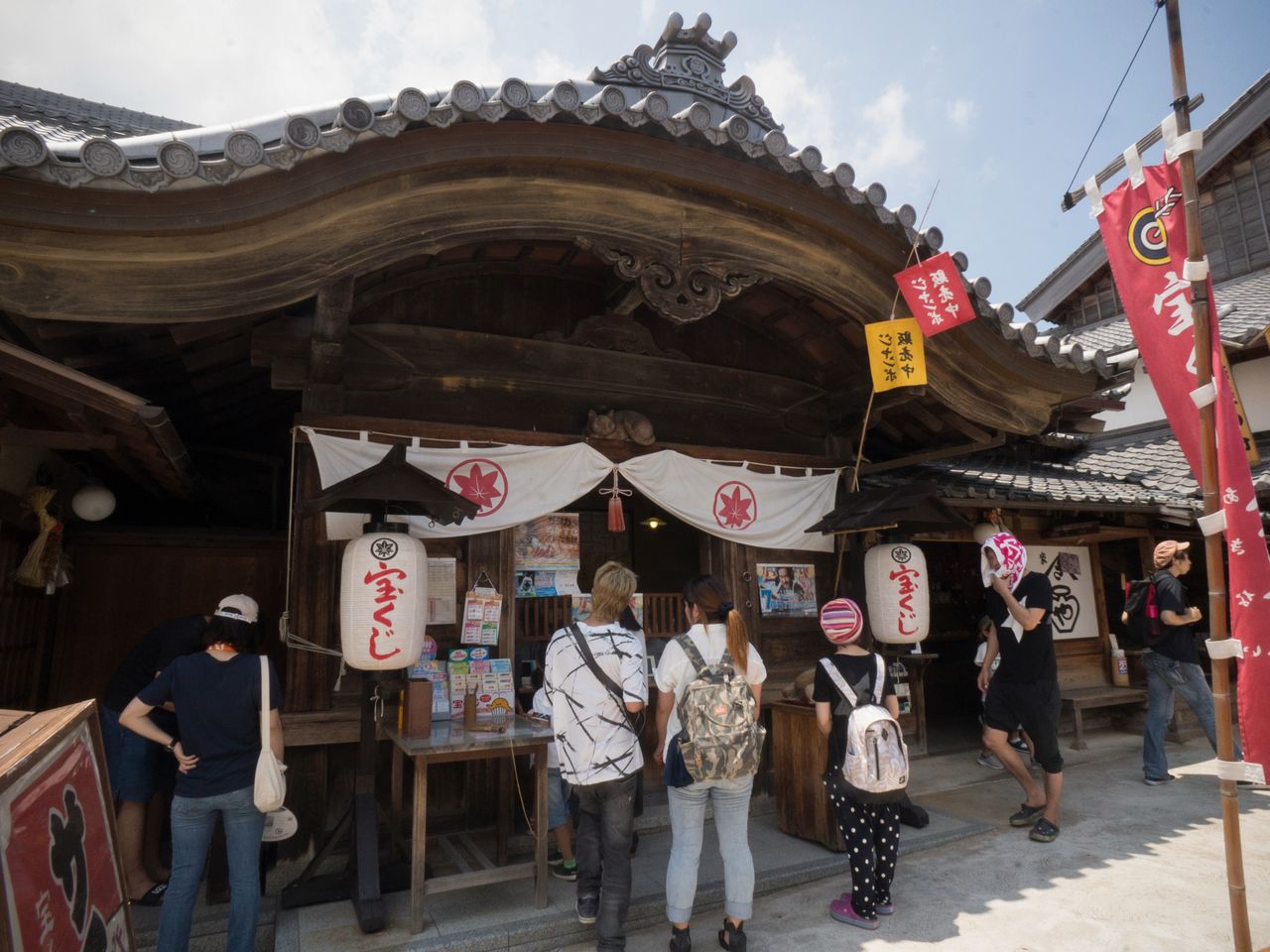 At the Okage-za theater’s Shinwa no Yakata (hall of myths), where Japanese myths are presented to the public, videos and exhibits introduce stories connected with Ise Shrine in an easy to understand manner. The show takes about 30 minutes, and is recommended before visiting the shrine. 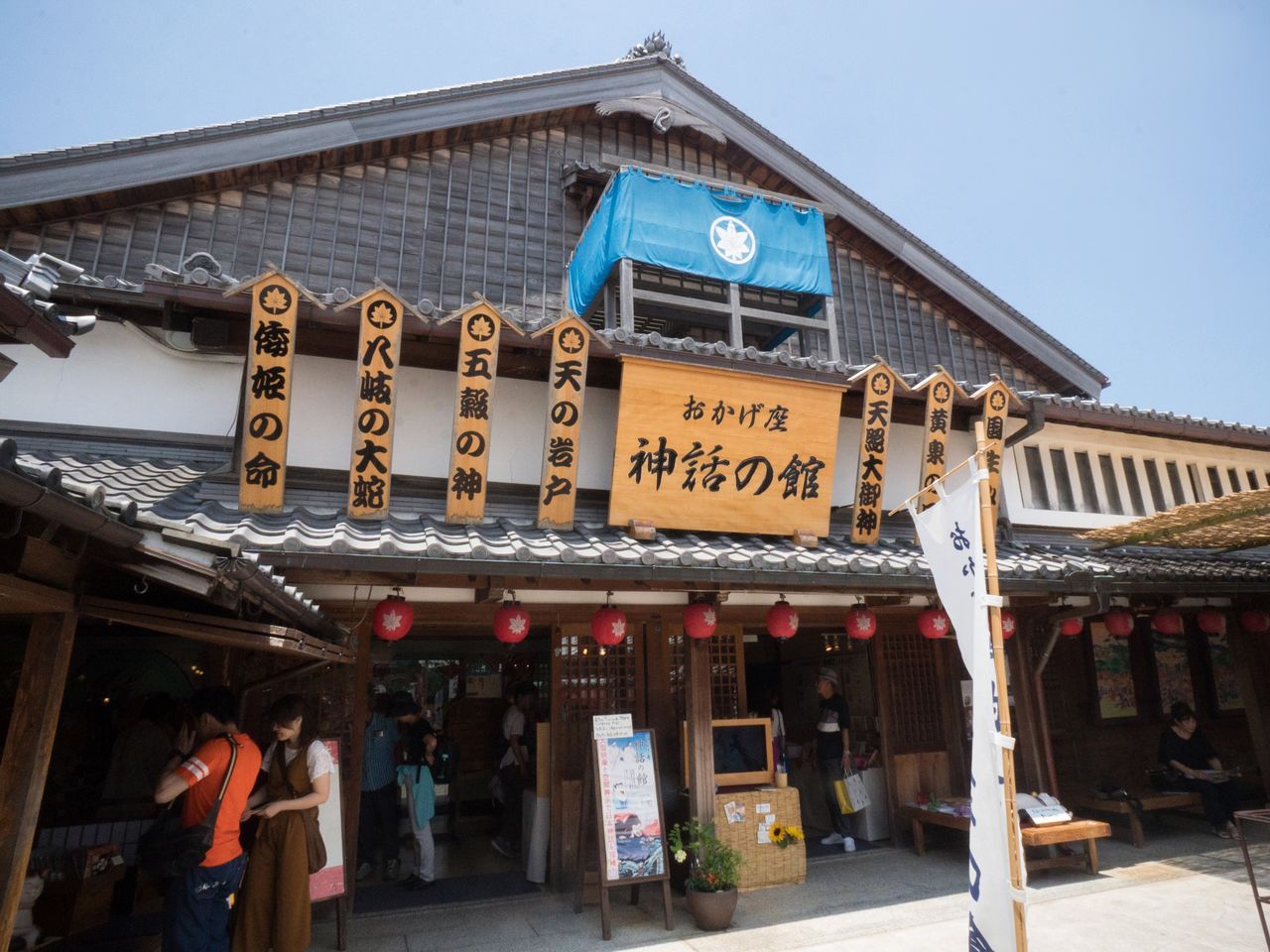 Okage-za’s Shinwa no Yakata is open year-round. Admission is ¥300 for adults, ¥100 for children aged 11 and under.

(Originally published in Japanese. Photos by Kuroiwa Masakazu and Fujii Kazuyuki, 96Box. Banner photo: The manekineko (beckoning cat) statue at the main entrance to Okage-yokochō is a popular spot for souvenir photographs.)