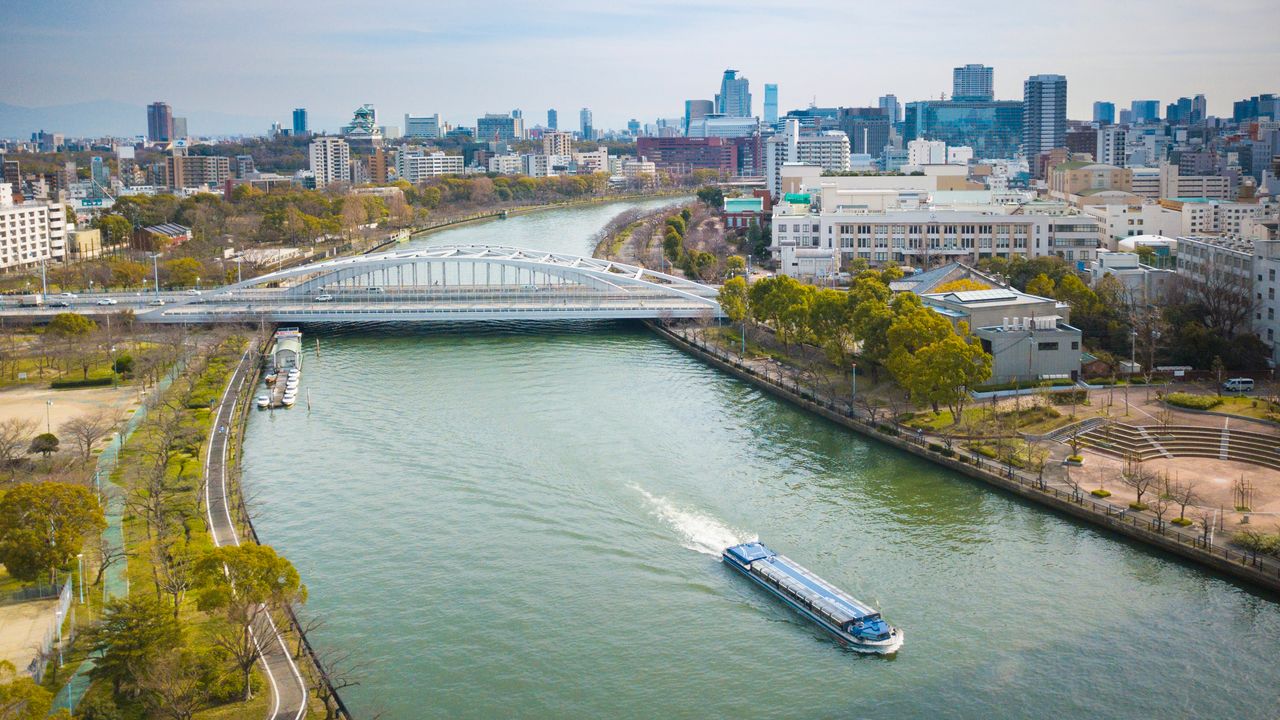 The City of Water: Exploring Osaka by Aqua Bus (Video)

Travel Jun 20, 2019
Osaka became a commercial hub on the strength of its extensive network of water transport options, and today, many of its business and leisure attractions are located by the water. We explore the city’s sights aboard the Aqua-Liner waterway bus.

Osaka has long flourished as a mercantile center thanks to a geographical convergence of waterways in its precincts. Among its many water courses—major and minor—are the Yodo River, sourced from Lake Biwa via Kyoto, and the Yamato River from Nara, both of which feed into Osaka Bay. During the Edo period (1603–1868), the ruling Tokugawa shogunate brought the city under its direct control, and its network of waterways was soon lined with domain warehouses from all over Japan, resulting in economic growth and the flowering of a distinct local kamigata (Osaka and Kyoto region) culture. In the succeeding Meiji era (1868–1912), the city’s convenience for the export trade led to large-scale factories being built close to the rivers and port, and Osaka became known as the “city of water." That moniker still applies today, with some 10% of the city’s land area being under water.

Related article › A History of Osaka, Japan’s City of Water 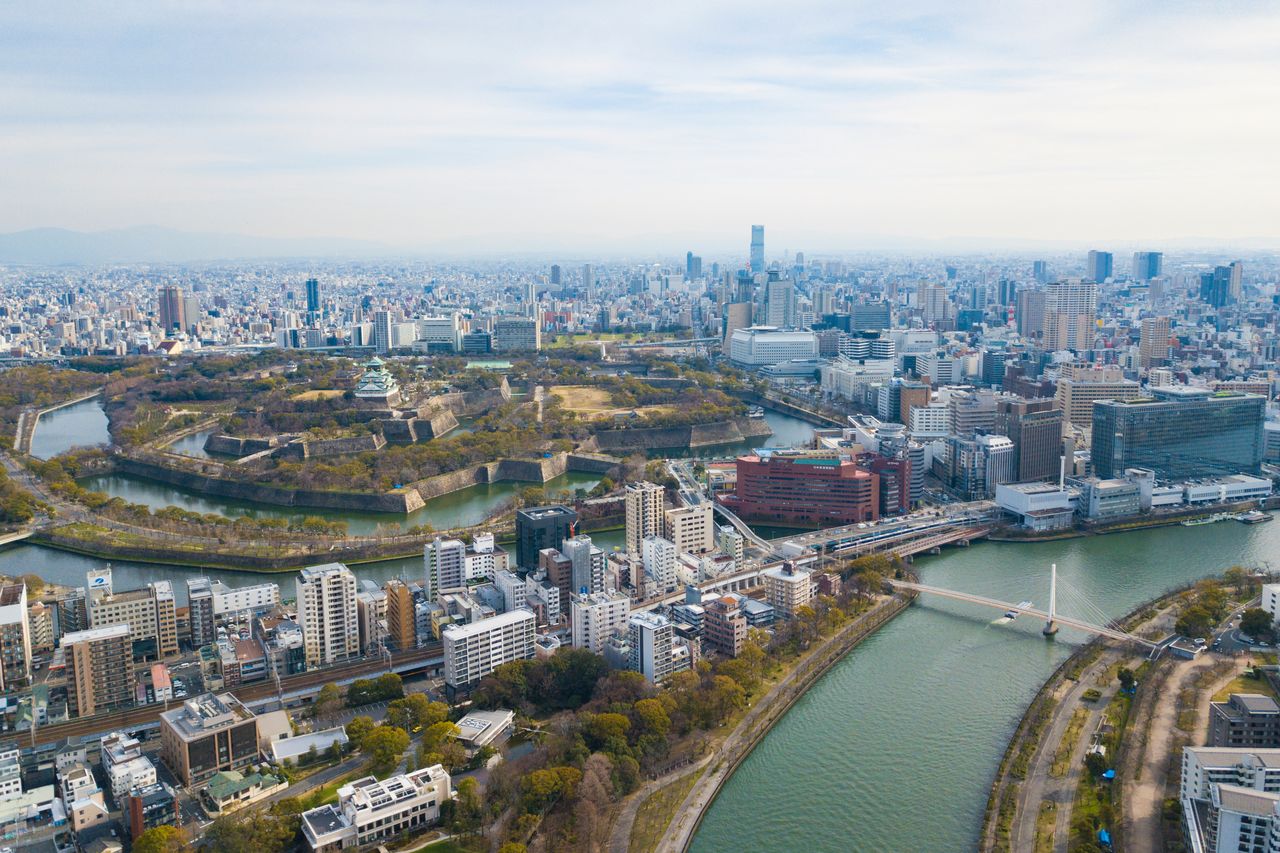 Waterways aplenty in the city of Osaka. At right, the Aqua-Liner waterway bus passes under a bridge on the Ōkawa river.

As You Like It: Pleasure Boat, Public Transport, or Both

“I hope people will enjoy discovering the areas that have long thrived along our waterways, as well as the modern skyscrapers of today in our city of water.”

So says Kishida Toshinori, projects officer at Osaka Aqua Bus, operator of the Aqua-Liner cruise boat that runs along the Ōkawa through central Osaka. It is a popular trip, which allows passengers to boat through town from city landmark Osaka Castle, past the urban towers and cultural hub of the river island Nakanoshima, on to the multipurpose waterfront development of Osaka Amenity Park, and then in spring, right by the cherry tree-lined Japan Mint—all with an informative audio guide. 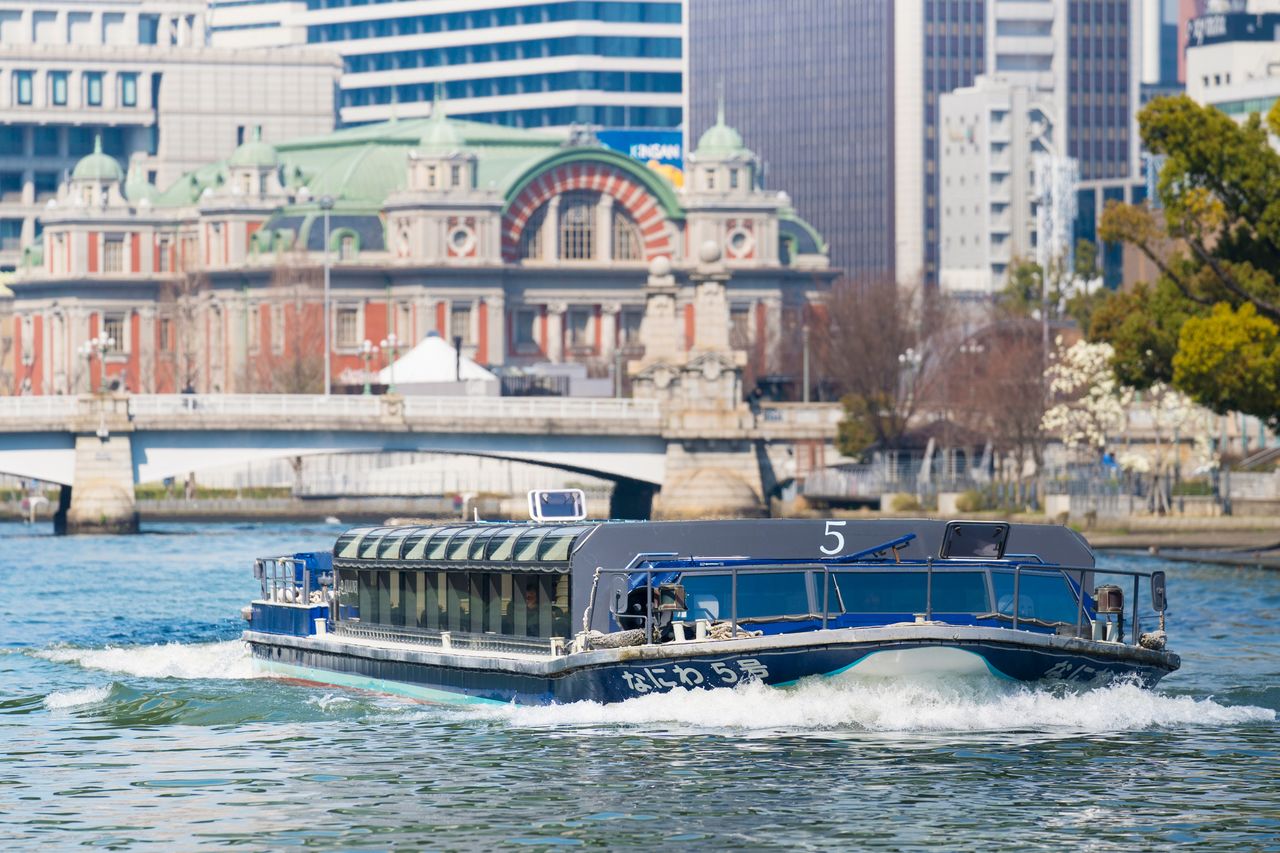 There are four places to board the Aqua-Liner: Osakajō (Osaka Castle) Pier on the Neya River; Yodoyabashi Pier, which is handy for visiting Nakanoshima; Hachikenyahama Pier near Tenmabashi; and the OAP (Osaka Amenity Park) Pier. The standard Osakajō-Nakanoshima sightseeing course is a 55-minute circuit around the Ōkawa. 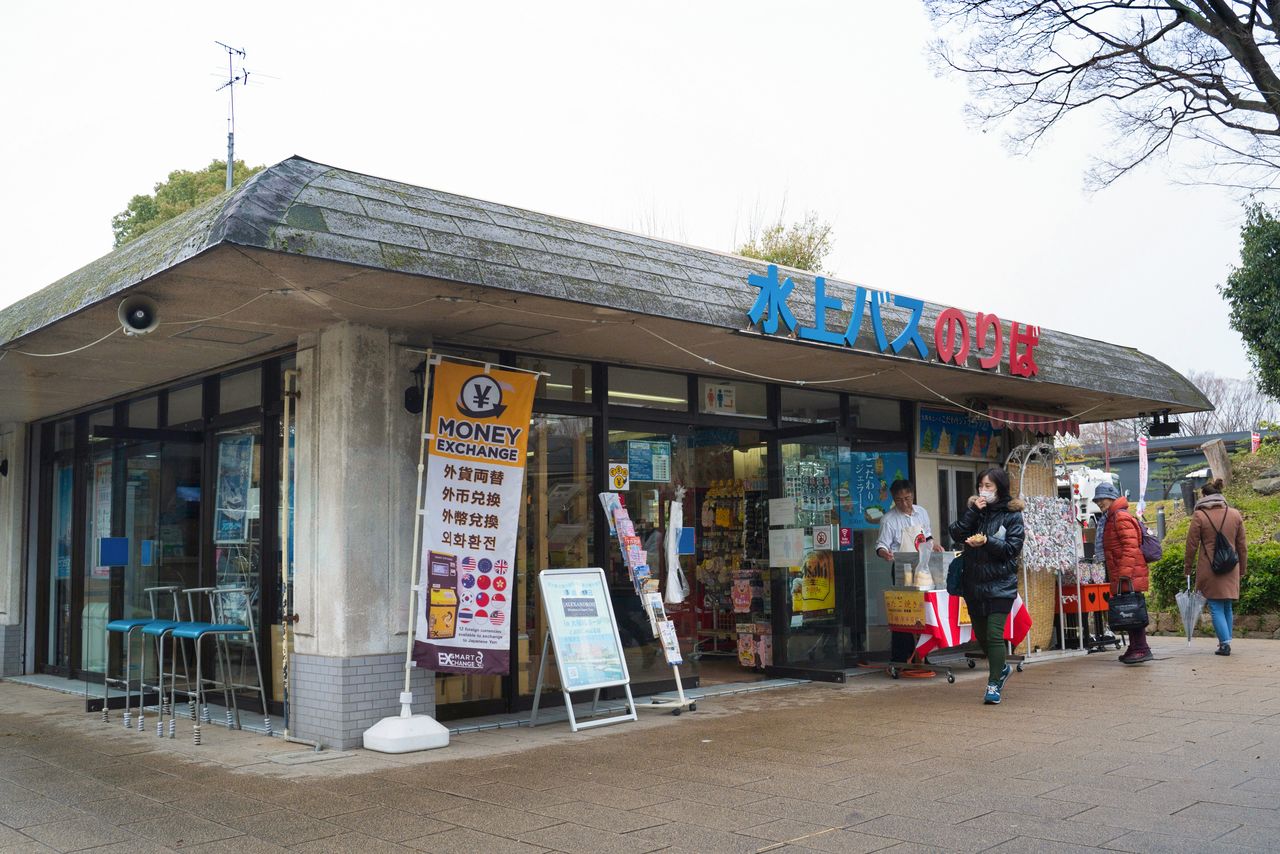 The boarding point at Osakajō (Osaka Castle) Pier, which has one departure per hour during operating hours. 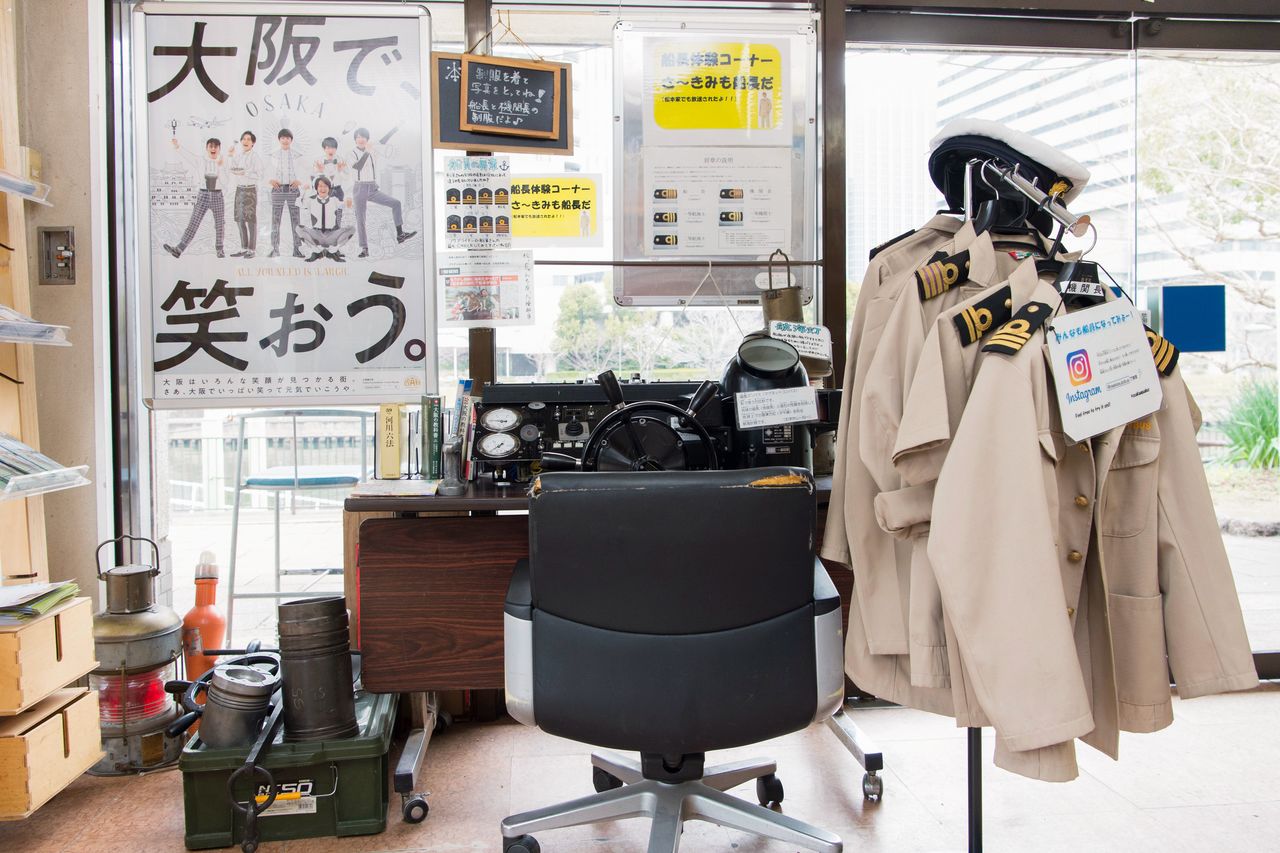 Passengers can rent crew uniforms free of charge and have a souvenir snap taken in costume in the captain’s seat. 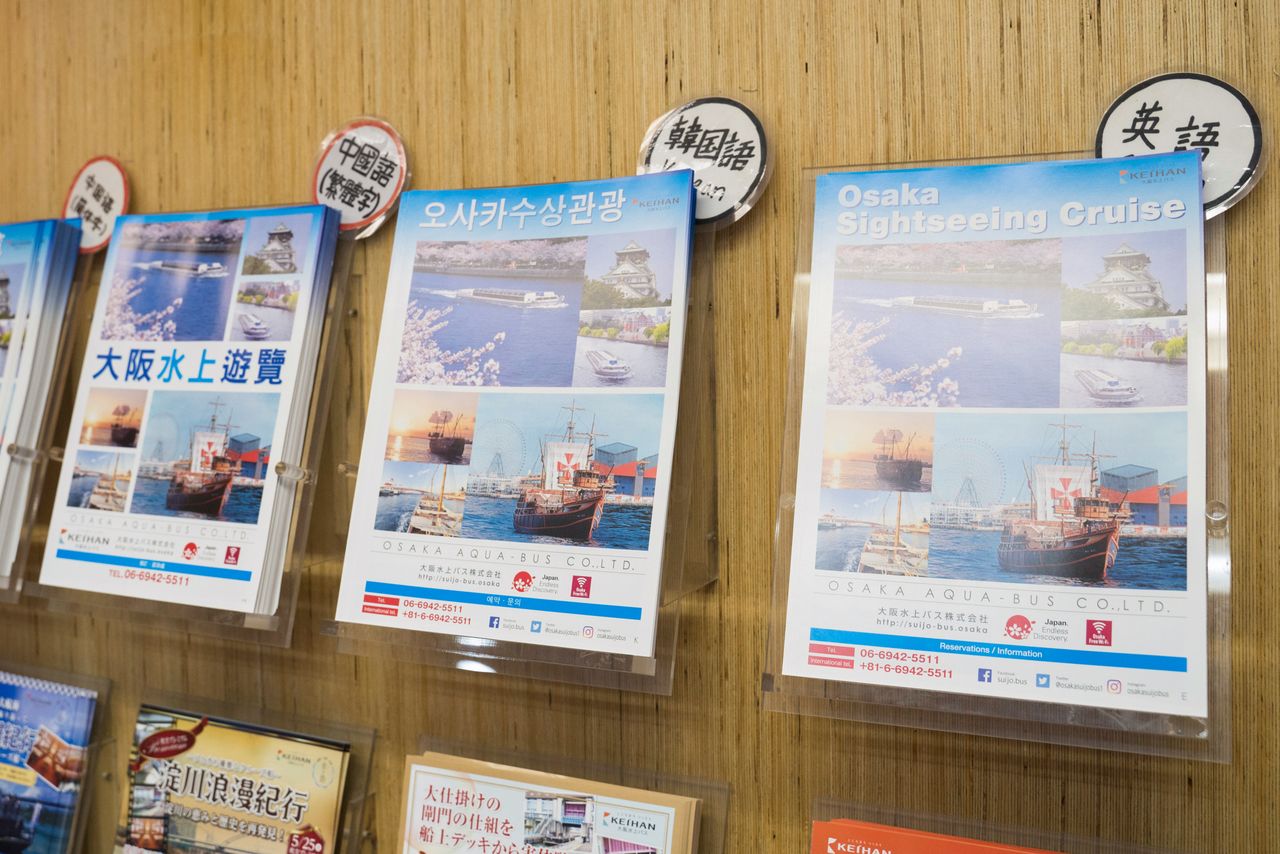 Aqua-Liner pamphlets are available in Japanese, English, Korean, and Chinese (simplified and traditional).

Many people use the boat both to sightsee and to get around town by choosing a sectional course allowing them to disembark along the route. Travelers planning to go on to Nakanoshima from Osaka Castle should hop on the Aqua-Liner when done on land at the castle, and see the central keep from down below on the river. They can then take in a waterside perspective of Nakanoshima’s modern towers and historic Central Public Hall on the way to Yodoyabashi Pier. 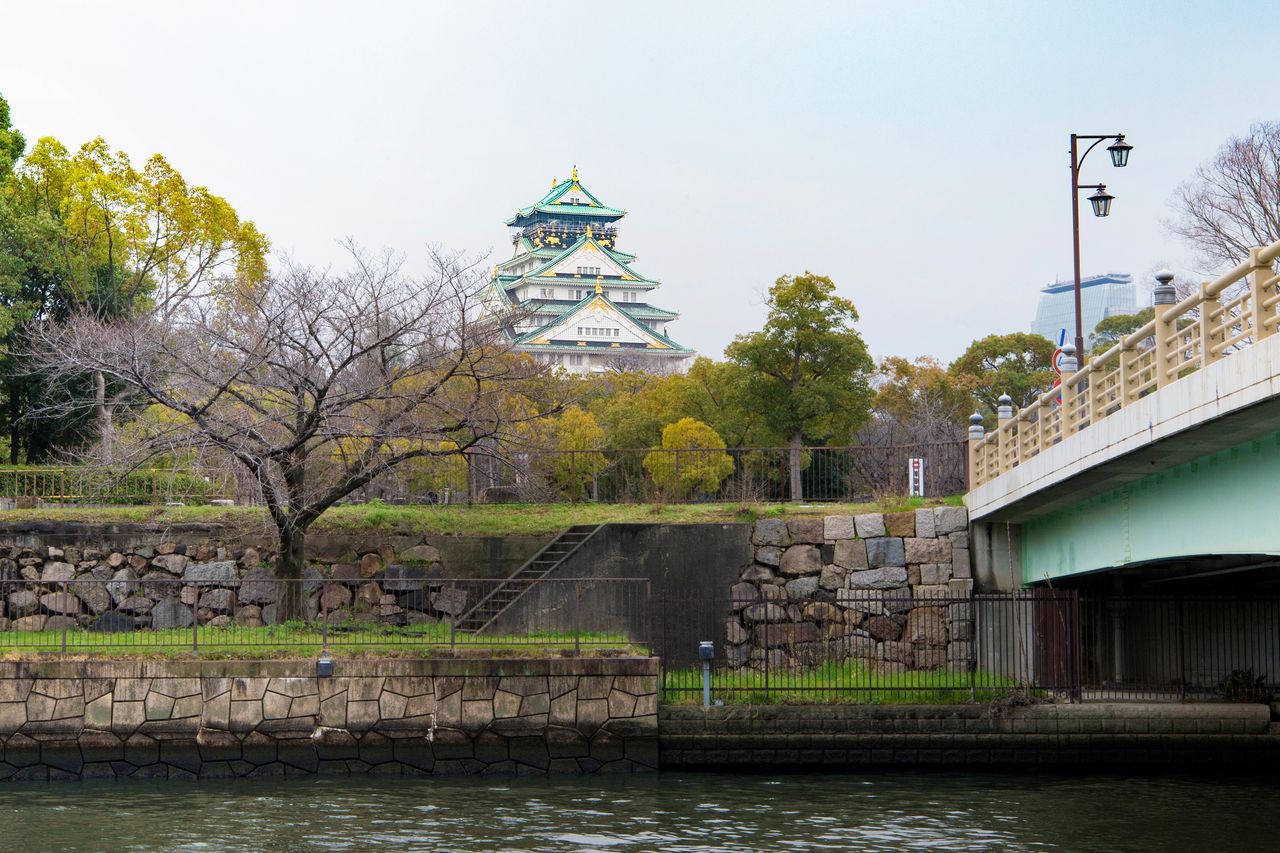 Looking up at Osaka Castle main tower from near Shinshigino Bridge. 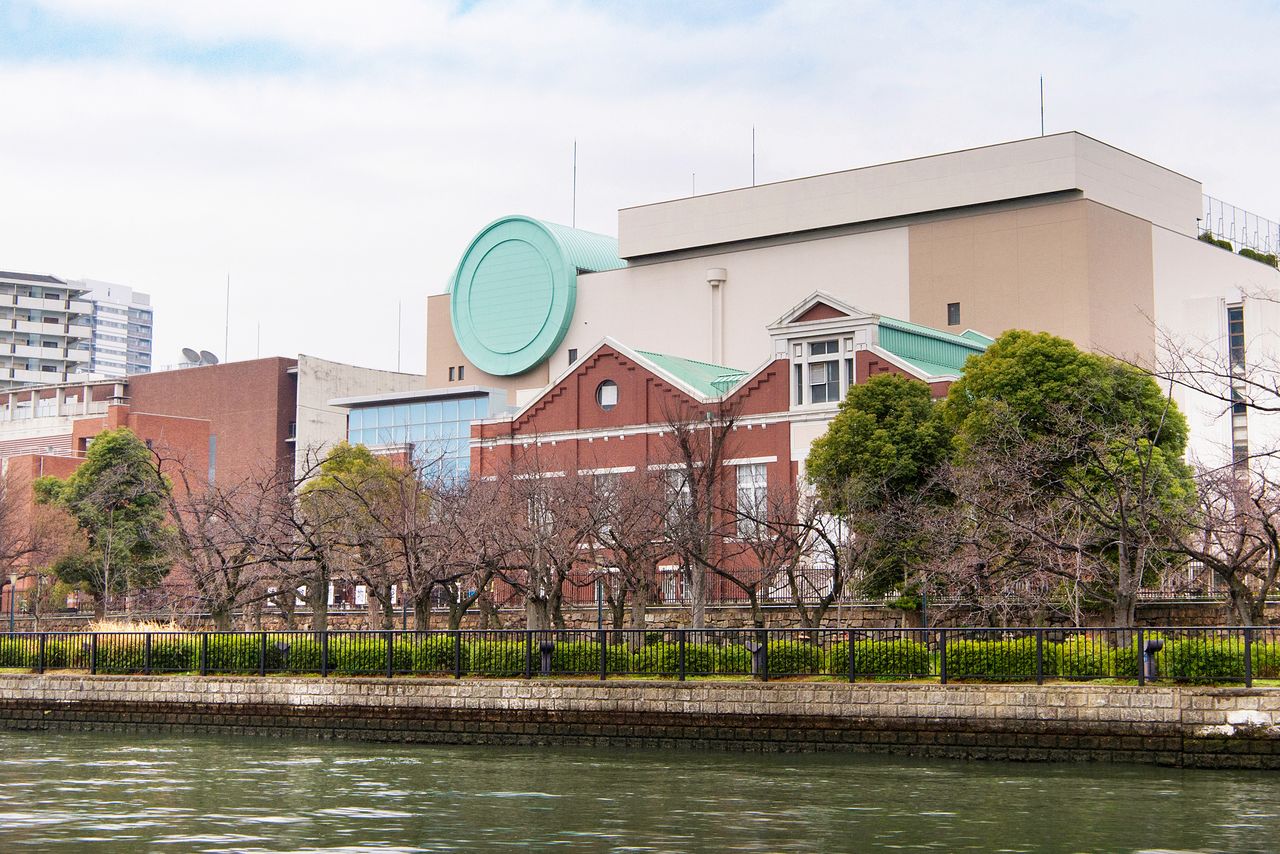 The Japan Mint, known for its riverside tunnel of cherry trees, is just to the north of the OAP (Osaka Amenity Park) Pier.

The Aqua-Liner is designed with extra-large windows that curve over above the passenger seating. Not only can one get a better view of the city but there is also the chance to take a good look at the underbelly of bridges along the way. This has even attracted a new category of clientele known as “under-bridge spotters.” 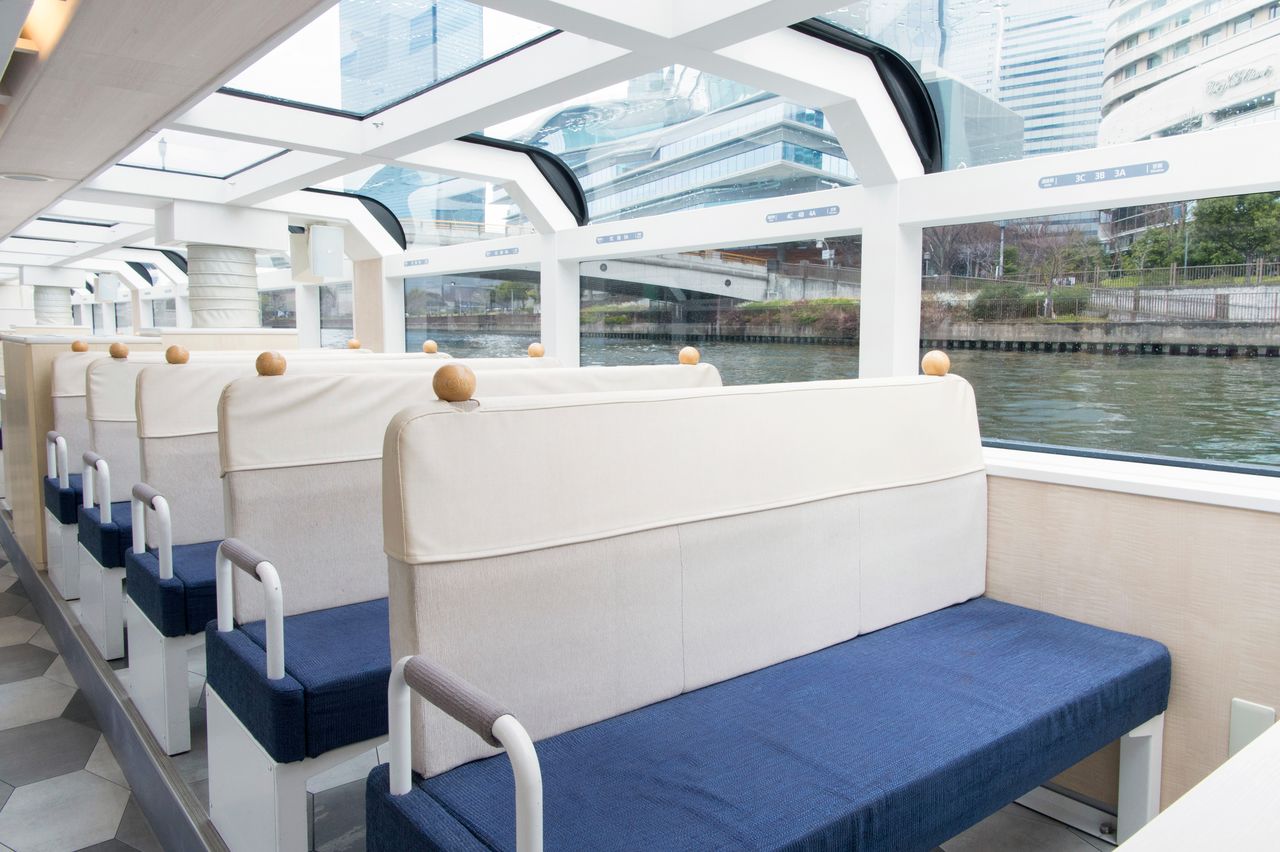 The bright interior with glass from wall to roof. 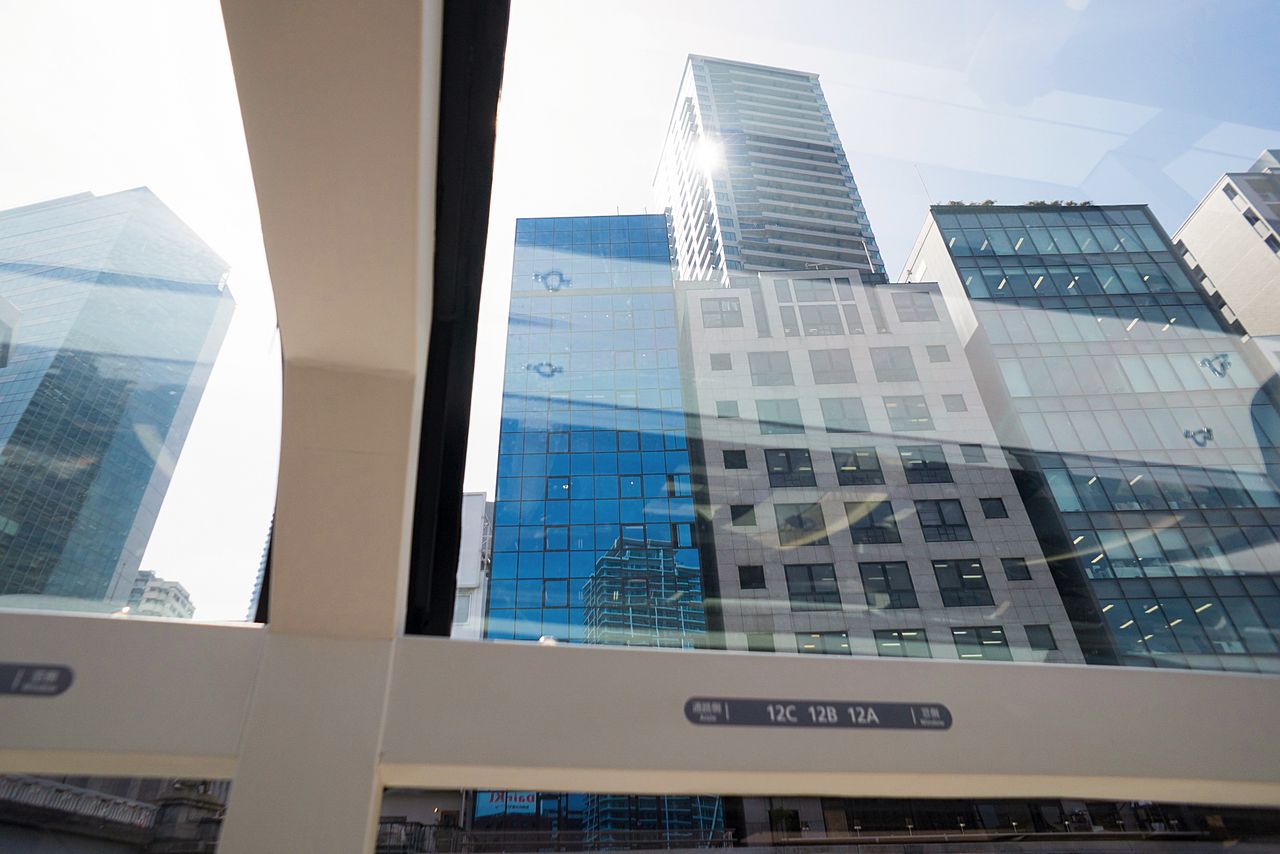 The roof also has an unusual, hidden design feature. As the Ōkawa is near the sea, its water level changes with the tides. At high tide, the Aqua-Liner’s roof would hit the bridges it passes under at its normal height, but it is designed to drop around 30 centimeters as needed. A demonstration of the feature is given between OAP and Osakajō Piers, so to see it in action, one should be on board for that section. 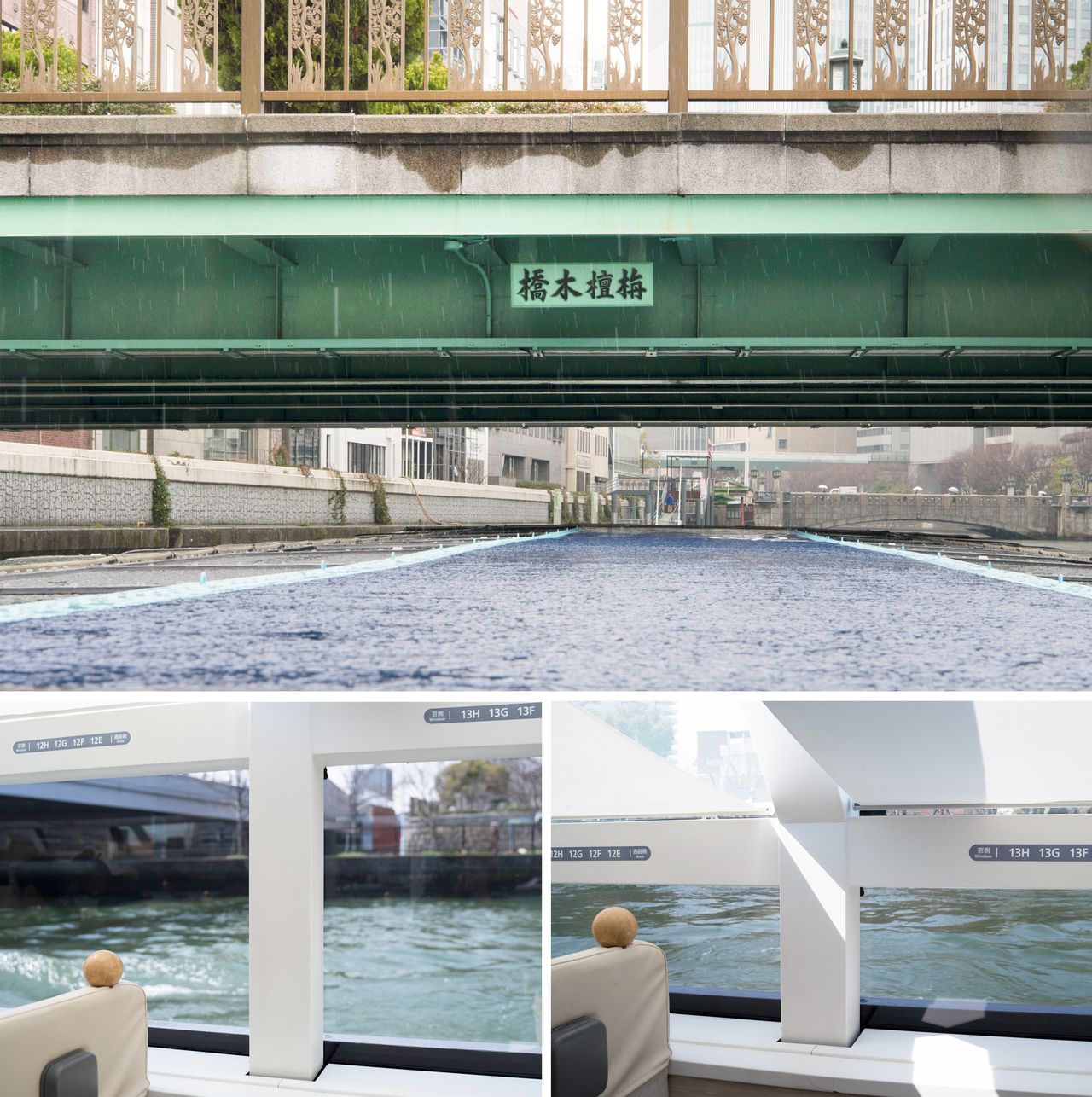 The boat has drinks and light snacks available for sale, as well as washrooms. Crew members are happy to take souvenir snaps for passengers, so feel free to let them know.

The cherry blossoms at the Japan Mint, in the Sakuranomiya area, and around Osaka Castle are magnificent in spring, and charter cruises are also on offer, so the Aqua-Liner is an option for some Osaka spring blossom viewing. 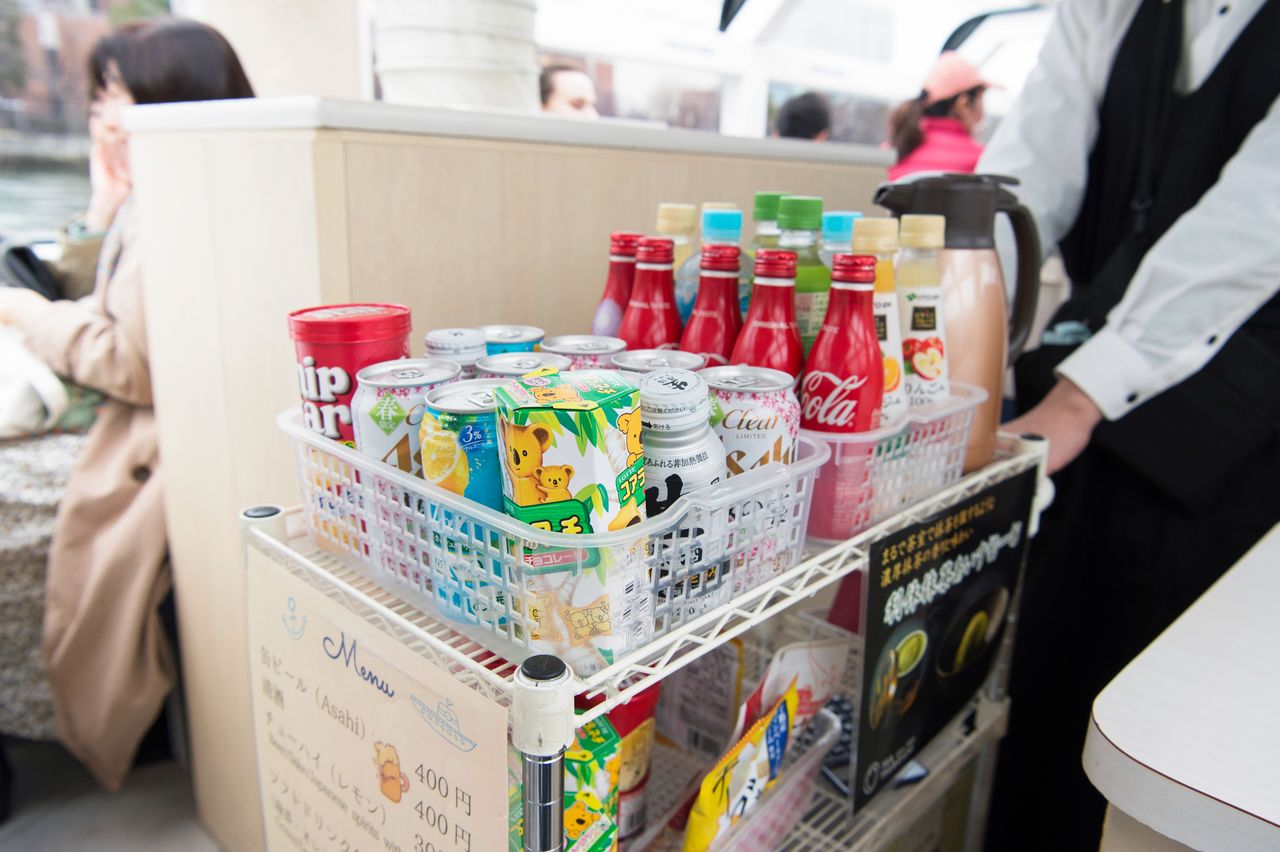 Drinks and snacks on sale on the Aqua-Liner. Beer and other alcoholic beverages are also available. 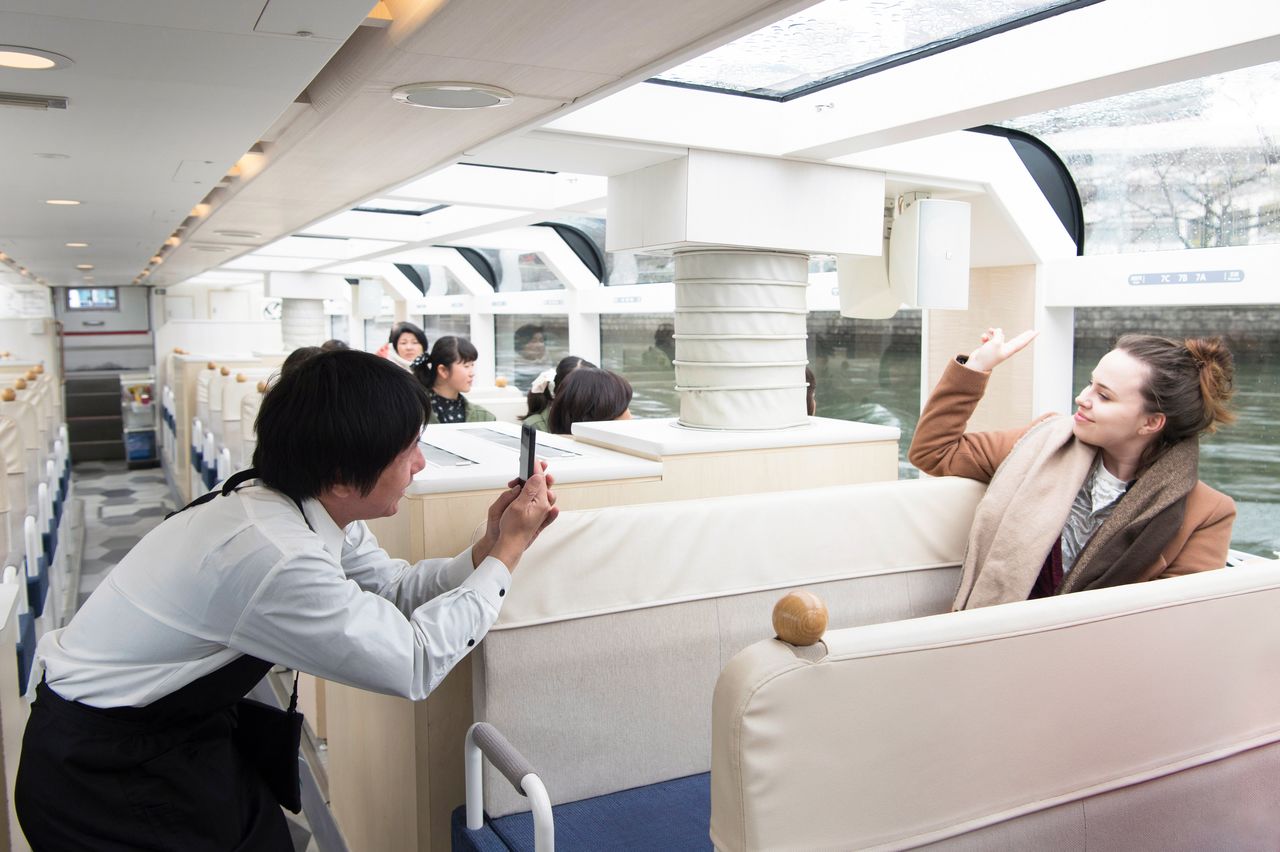 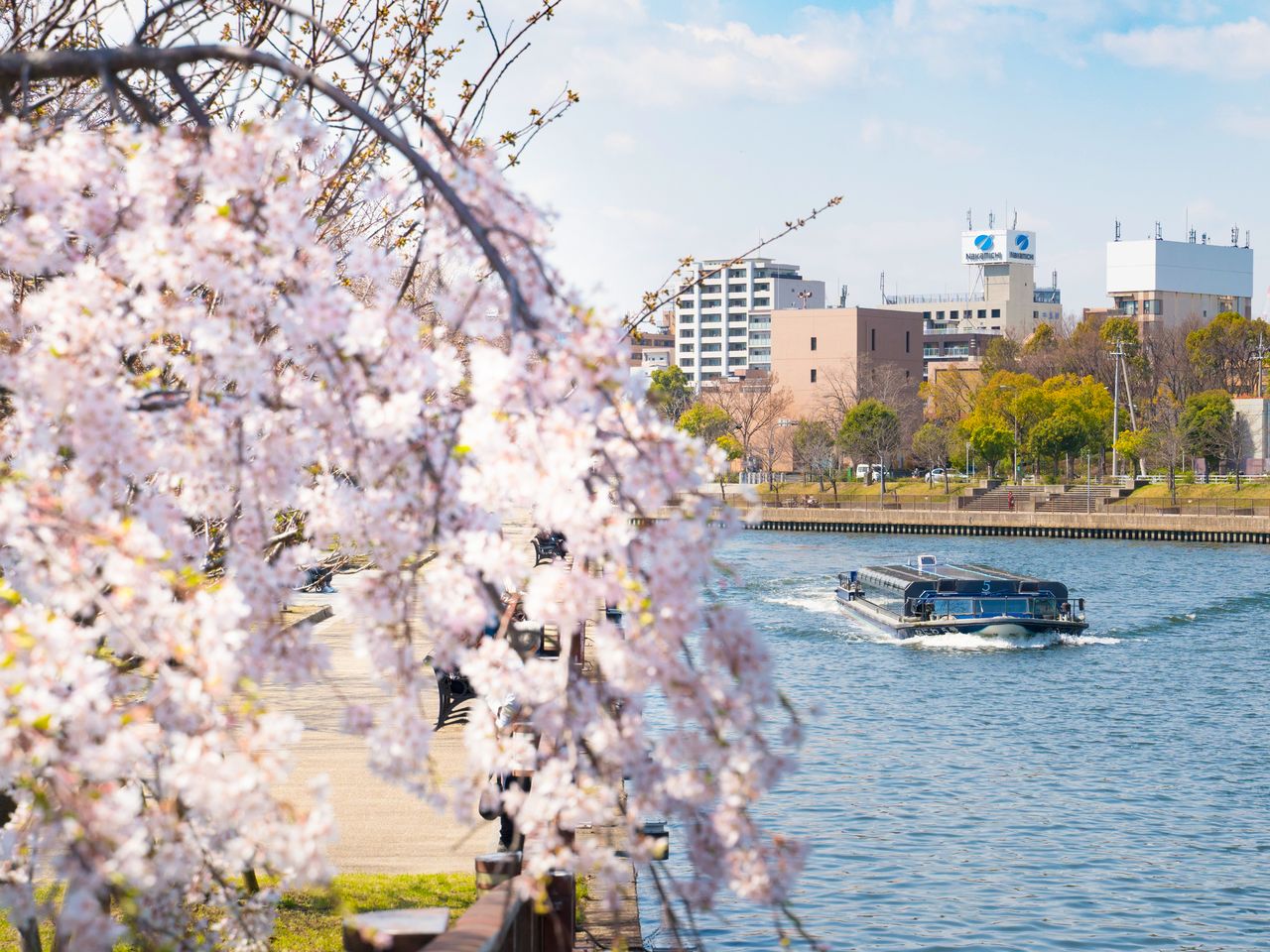