A History of Osaka, Japan’s City of Water

Culture Society History Jun 4, 2019
An Osaka native and expert on architectural history and urban culture explains how Osaka grew to become an economic and cultural center in western Japan.

Stretching along Osaka Bay and crisscrossed by rivers and canals, Osaka is known as the “city of water.” Its abundant waterways spurred its development and laid the groundwork for a thriving community. Many of Osaka’s most famous tourist sights lie along canals, rivers, or the seashore, including the bustling Minami district—home to Dōtonbori street and its giant billboards—the cluster of public facilities on the river island of Nakanoshima, the moat-enclosed fortress of Osaka Castle, and the bay area where Universal Studios Japan and Osaka Aquarium are situated. 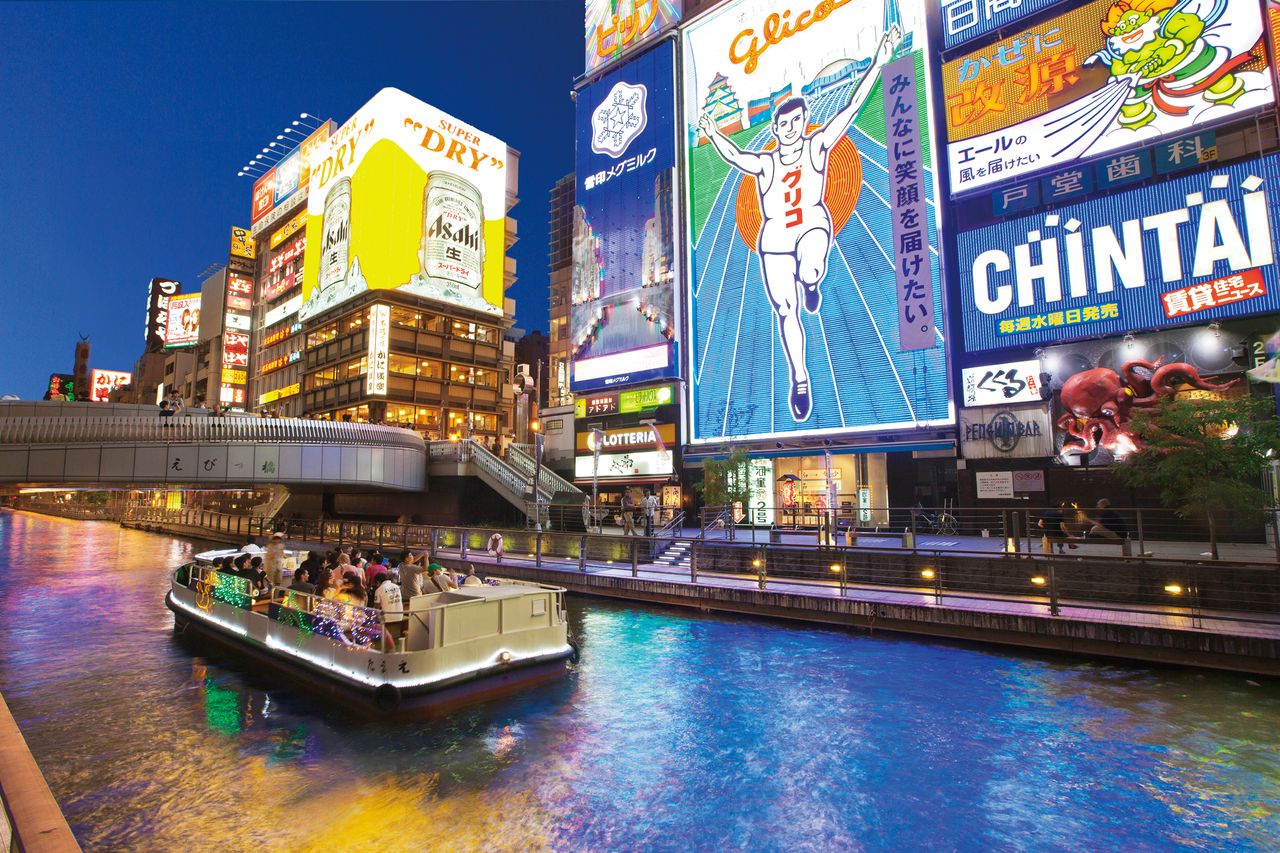 Osaka’s connection with water stretches back to its very beginnings. The city is situated on alluvial deposits of the Yodo and Yamato Rivers. Sediment accumulated over millennia, forming a small peninsula called the Uemachi Plateau and producing numerous sandbars known collectively as Naniwa Yasoshima.

It was here that a port was built linking a succession of imperial capitals constructed from the sixth to eighth centuries along the upper reaches of the Yamato River in modern-day Nara Prefecture to the sea. Naniwa, as the area was then known, grew into a major settlement rivaled in importance only by the shifting capitals. It was the starting point for ships carrying Japanese missions to Sui and Tang China, and for nine years from 645 and one year from 744 it even served as Japan’s imperial capital.

The name Naniwa itself, although written with different characters over the ages, has always been rendered with characters that bring to mind an area of fast-flowing water beside the sea. 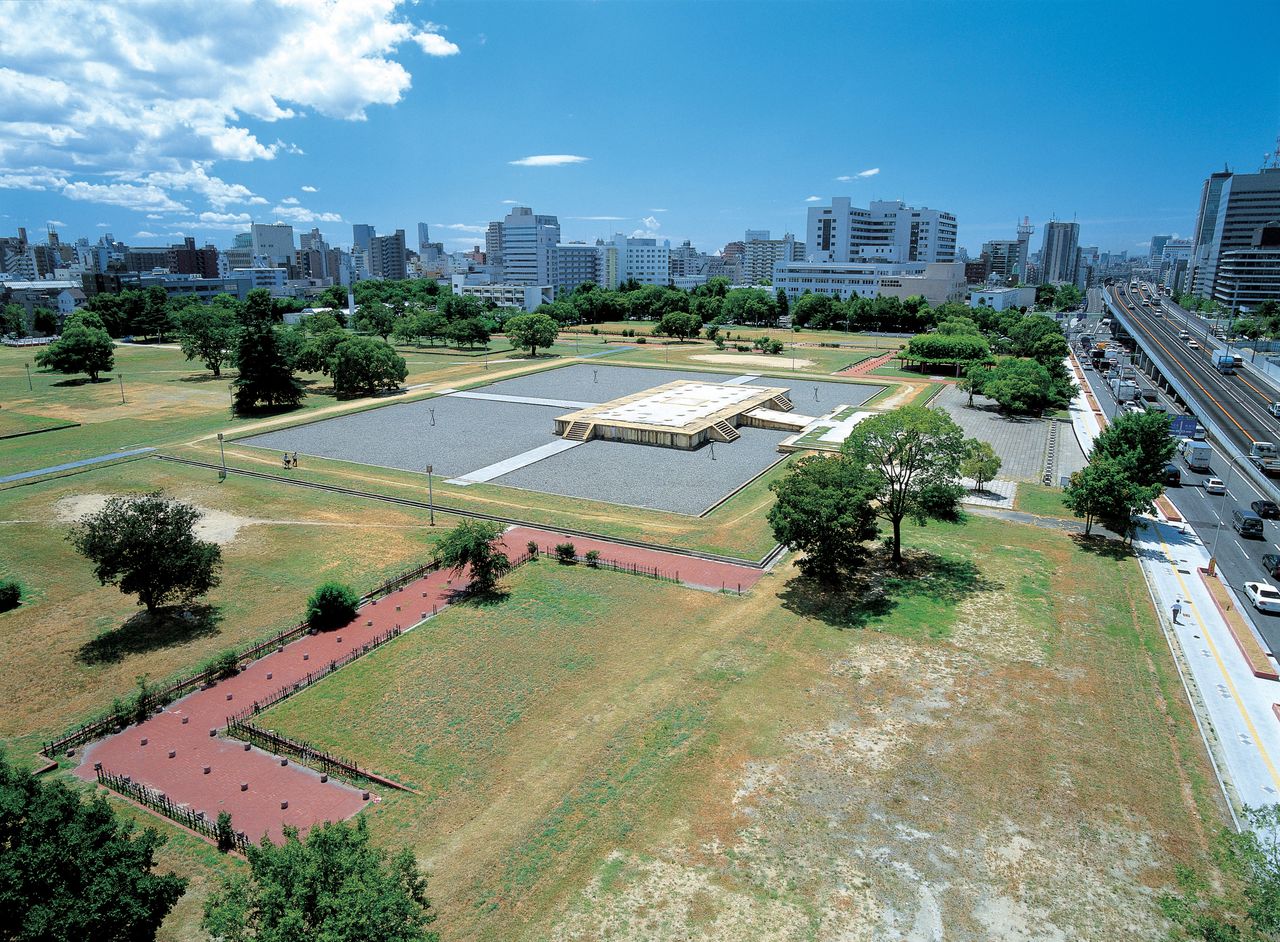 The site of Naniwakyō, the historic palace of the capital for one year from 744. (© Osaka Convention and Tourism Bureau).

The ancient Sumiyoshi Taisha shrine still brings to mind the maritime roots of the city. The sacred space hosts a line of three halls that face westward to the sea like a fleet of ships, their respective deities either masters of the water or patrons of sailors.

The Kitchen of the Nation

From the fifteenth century, Naniwa came to be known as Osaka. It grew in significance both militarily and as a transportation center, and leaders through the ages strove to control the area. In 1532, the Buddhist priest Rennyo established the fortified temple town of Ishiyama Honganji there. After the complex was destroyed in battle half a century later, powerful warlord Toyotomi Hideyoshi built Osaka Castle on the site in 1583.

In 1615, the recently established Tokugawa shogunate snuffed out the remaining power of the Toyotomi clan with victory at the Siege of Osaka Castle before taking the city under its direct control. It then set out to excavate a network of waterways, establishing Osaka as a full-fledged castle town. Engineers strengthened the soft, damp soil, turning trenches dug for water drainage into canals for transportation. Merchants and craftsmen moved to the city in droves, laying the foundations for the prosperity that continues to this day.

Osaka rapidly developed into a trade center and came to be called the “kitchen of the nation.” Markets around the city sold goods brought in across the Seto Inland Sea along with international wares from a burgeoning Pacific Ocean network. Osaka was also connected to the imperial capital Kyoto along the Yodo River and was a major stop along the newly built network of roads.

A print shows a fleet of cotton ships jostling for space at the mouth of a river as they set sail for Edo. Goods from around the country were transported to Osaka by water and stored in domain warehouses. (Courtesy Osaka Prefectural Nakanoshima Library)

Warehouses in Osaka owned by the domains played a major role in supporting the city’s economic activities. Regional lords needed to pay taxes to the shogunate and would exchange rice collected through their own land taxation activities and stored at their riverside warehouses in Osaka for money, gauging when rates were most favorable. The world’s first futures trading also took place at the Dōjima Rice Exchange.

Osaka also became a center for Genroku culture that flourished from the second half of the seventeenth century to the early eighteenth century. The increased wealth of townspeople during the Edo period (1603–1868) allowed many residents to devote time to scholarship and the appreciation of art, literature, and performances of kabuki and ningyō jōruri puppet theater. Great writers of the period like Osaka-born Ihara Saikaku, known for his novels depicting the lives of merchants and other local citizens, and playwright Chikamatsu Monzaemon won great popularity in the city. It was during this time that Dōtonbori developed into an entertainment district lined with playhouses.

In the mid-nineteenth century, early foreign visitors to Osaka saw resemblances to European cities like Paris and Venice. As Japan modernized in the Meiji era (1868–1912), however, the city’s industrialization led it to be nicknamed the “Manchester of the East.” The Meiji government constructed facilities like the Osaka Mint and the Osaka Arsenal along waterways, while private enterprise promoted the machinery industry and shipbuilding. The growth of the textile industry, including cotton spinning, particularly drew comparisons to the British city.

Buoyed by industrial development, Osaka’s population soared. It was further spurred on by an influx of migrants from Tokyo after the Great Kantō Earthquake of 1923. In 1925, the city incorporated 44 neighboring towns and villages to secure new land for homes and industry, swelling in size to 181 square kilometers and a population of 2.1 million. For a time it even surpassed Tokyo to become one of Asia’s largest commercial cities, ranking alongside New York, London, Paris, and Berlin on the global stage.

Around this period, improvements were made to infrastructure like roads, rail lines, water supplies, and sewer services. The early twentieth century was also when important cultural facilities like Osaka City Central Public Hall, Osaka Science Museum, Tennōji Zoo, and the reconstructed central keep that acts as a history museum at Osaka Castle were built. 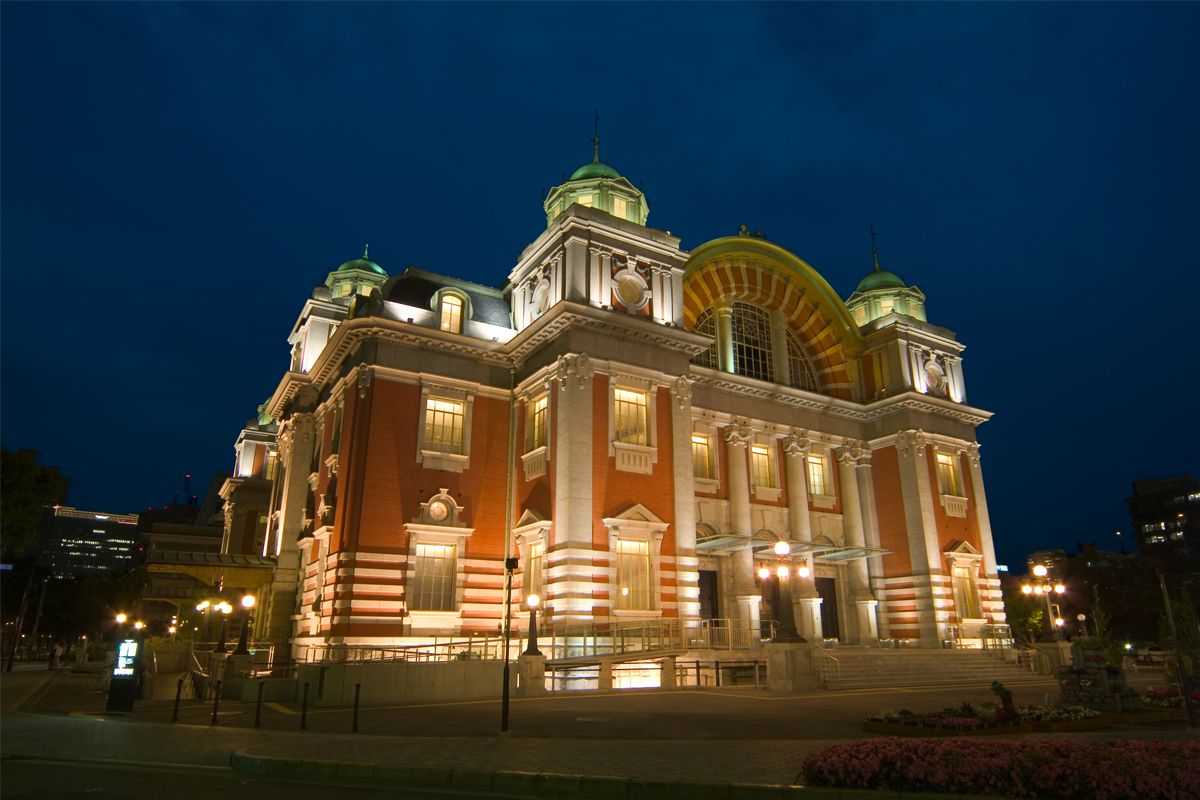 Osaka followed Western models to modernize the facilities on Nakanoshima Park and its central wholesale markets. On major thoroughfare Midōsuji, authorities buried electric wires and installed streetlights to give it an attractive appearance on par with international standards, adding lines of ginkgo trees to demonstrate pride in being a top Asian city.

The city developed a modern urban culture typified by lavish department stores along streets like Shinsaibashisuji and Sakaisuji, and Western-style cafés packed with customers. Rail lines extended out to the suburbs to service new residential areas inspired by Britain’s garden cities. Railway companies also began to manage sports facilities, beaches, and amusement parks. On weekdays, trains ferried workers to the heart of the city, and at weekends the same locomotives took families out on leisure trips. Umeda and Nanba Stations became centers of amusement and shopping, with their station buildings boasting department stores and cinemas and theaters nearby.

Central Osaka was reduced to rubble in World War II, but the city made a remarkable recovery in the postwar era.

The 1970 Osaka Expo, held in the Senri Hills to the north of the city with the theme of “Progress and Harmony for Mankind,” became a symbol for Japan’s high-growth period. The first World Exposition to take place in Asia, it attracted a record 64 million visitors. Then in 1990, the International Garden and Greenery Exposition promoted the importance of plants and vegetation in urban spaces. 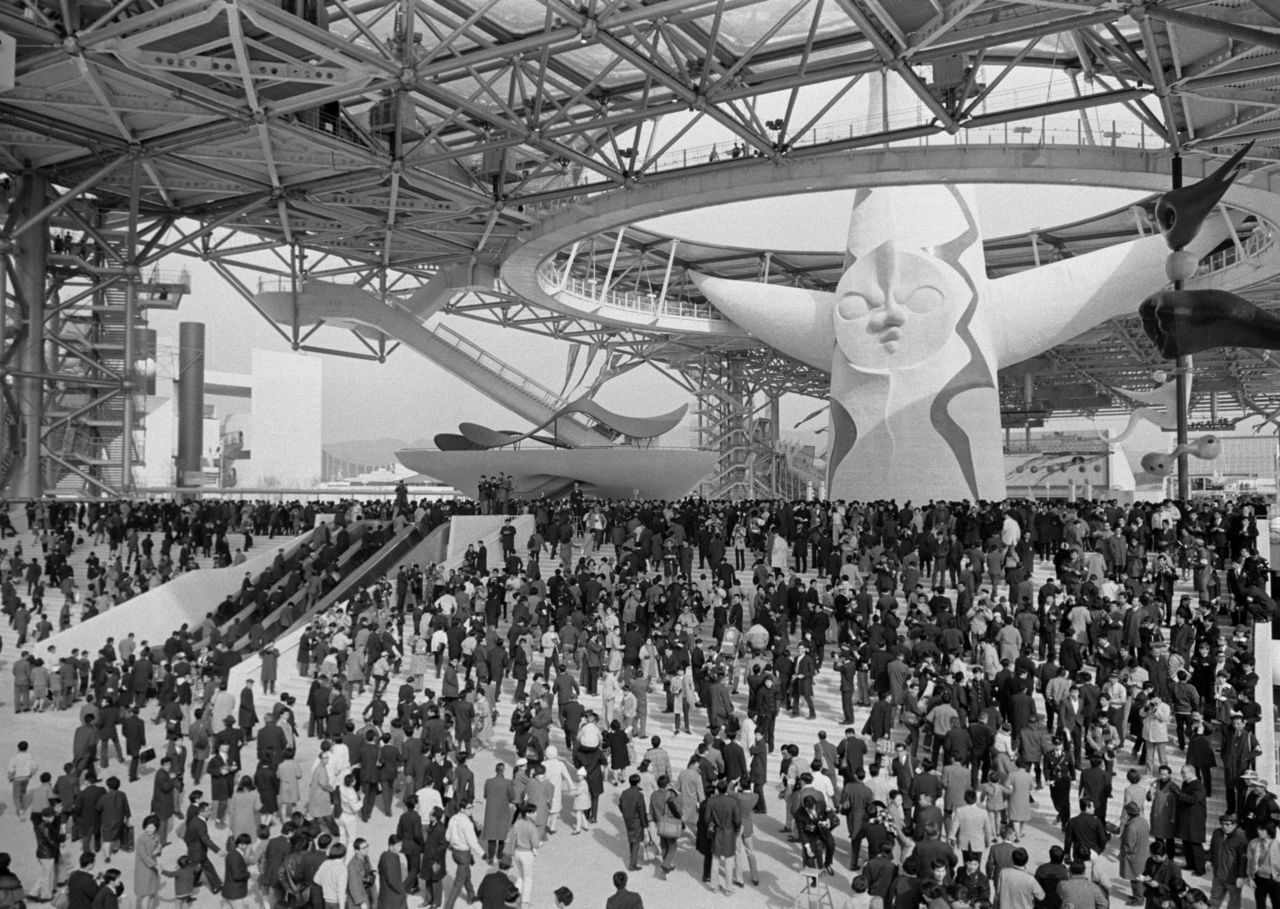 Expo 70’s Tower of the Sun, surrounded by droves of visitors. (© Jiji)

Osaka has been an international city throughout its history. It grew as a commercial and transport center strongly aware of its connections to the wider world.

This has fostered open attitudes among Osakans and a willingness to take in different values and new forms of culture. Today, Osaka is a city rich in diversity where the tendency is for residents to affirm and show interest in people with fresh ideas and a sense of individuality.

In 2018, Osaka was again chosen to host the World Expo in 2025. This time, the venue will be Yumeshima, an area of reclaimed land in Osaka Bay. The theme has been set as “Designing Future Society for Our Lives” with an emphasis on international cooperation and contributing to the meeting of sustainable development goals set by the United Nations. Planners hope the event will send out a new message to the international community about the future.

(Originally published in Japanese. Banner photo: Osaka Castle stands in the center of the city. © Osaka Convention and Tourism Bureau.)