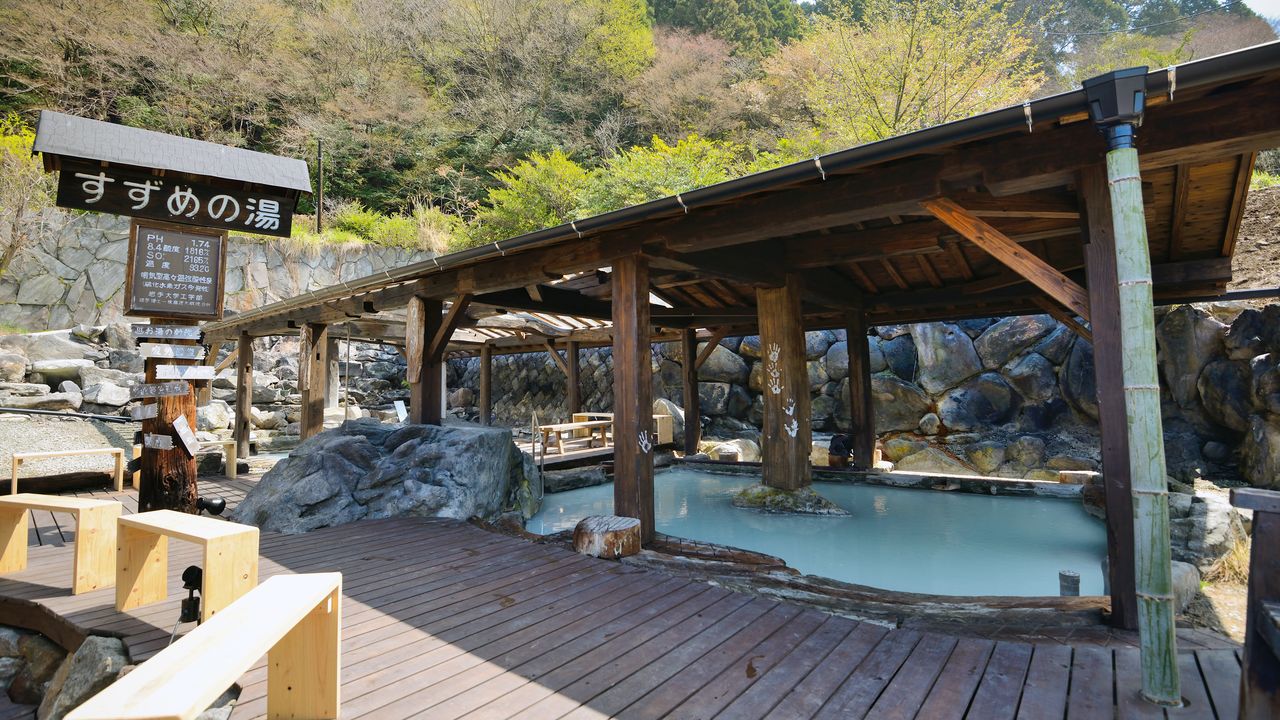 Suzume-no-yu: A Celebrated Kyūshū Spring Back on the Map

About 200 years ago, secluded natural baths were discovered deep in the mountains of Aso, in Kumamoto. During the Edo period (1603–1868), only samurai of the Kumamoto clan were permitted to bathe in these waters. Following the Meiji Restoration (1868), the area, in the village of Minamiaso, was opened to the general public, and spas catering to the common people thrived. The place came to be known for its jigoku-onsen—“infernal,” or sulfurous, hot springs—thanks to the places nearby where volcanic gas emissions prevent even plants from growing.

Today, one such spa remains. Known as Seifūsō, it has stood at the foot of Eboshi-dake since the Meiji era (1868–1912). The place is known for Suzume-no-yu, a hot spring of a type rare even in Japan for its constant upwelling of sulfurous waters from belowground. The waters can be bathed in just as they well up from beneath the tubs, without any dilution with added hot or cold water. Its many admirers refer to it as “a miraculous place” where one can soak in unadulterated hot spring waters.

Having been seriously damaged in the Kumamoto earthquakes of April 2016, Seifūsō suffered a further setback some two months later, during initial recovery work. At that time, some of the most torrential rains on record for the area caused landslides that nearly obliterated the facilities, as well as severing road access. Thus, Seifūsō was forced to shut down entirely until April 16, 2019, when Suzume-no-yu was once again made available to day-trippers ahead of the grand reopening of the full ryokan establishment.

Both the open-air and indoor baths at Suzume-no-yu have been renovated while preserving their original styles. New facilities include a resting area and another open-air bath, this one a cold mineral spring discovered in the course of reconstruction. The first visitors in three years to the newly restored site are enjoying these secluded baths to the fullest. 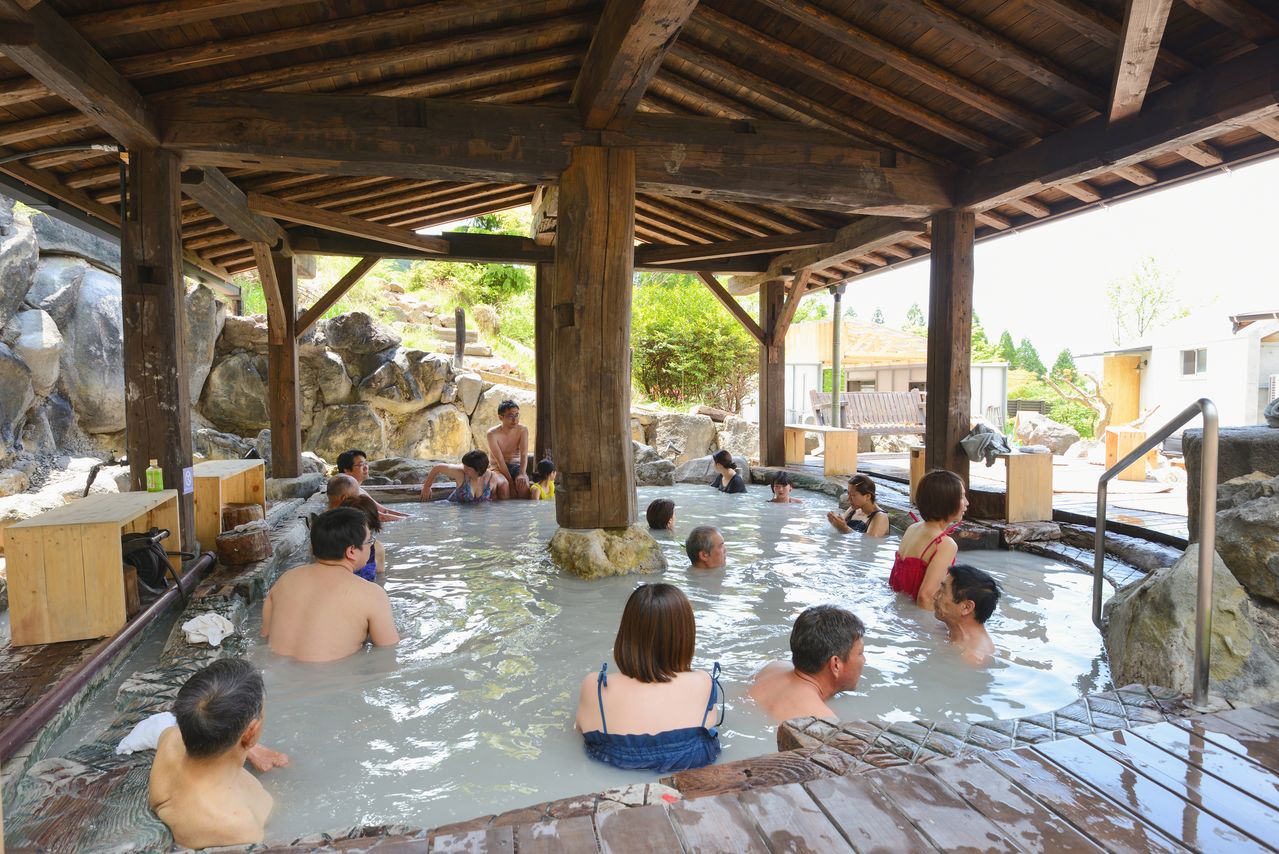 Mixed bathing is the order of the day in the open-air bath at Suzume-no-yu, although bathers can no longer go nude. Either yuamigi (bathwear) or swimsuits must now be worn. Basic yuamigi may be purchased at the gift shop. 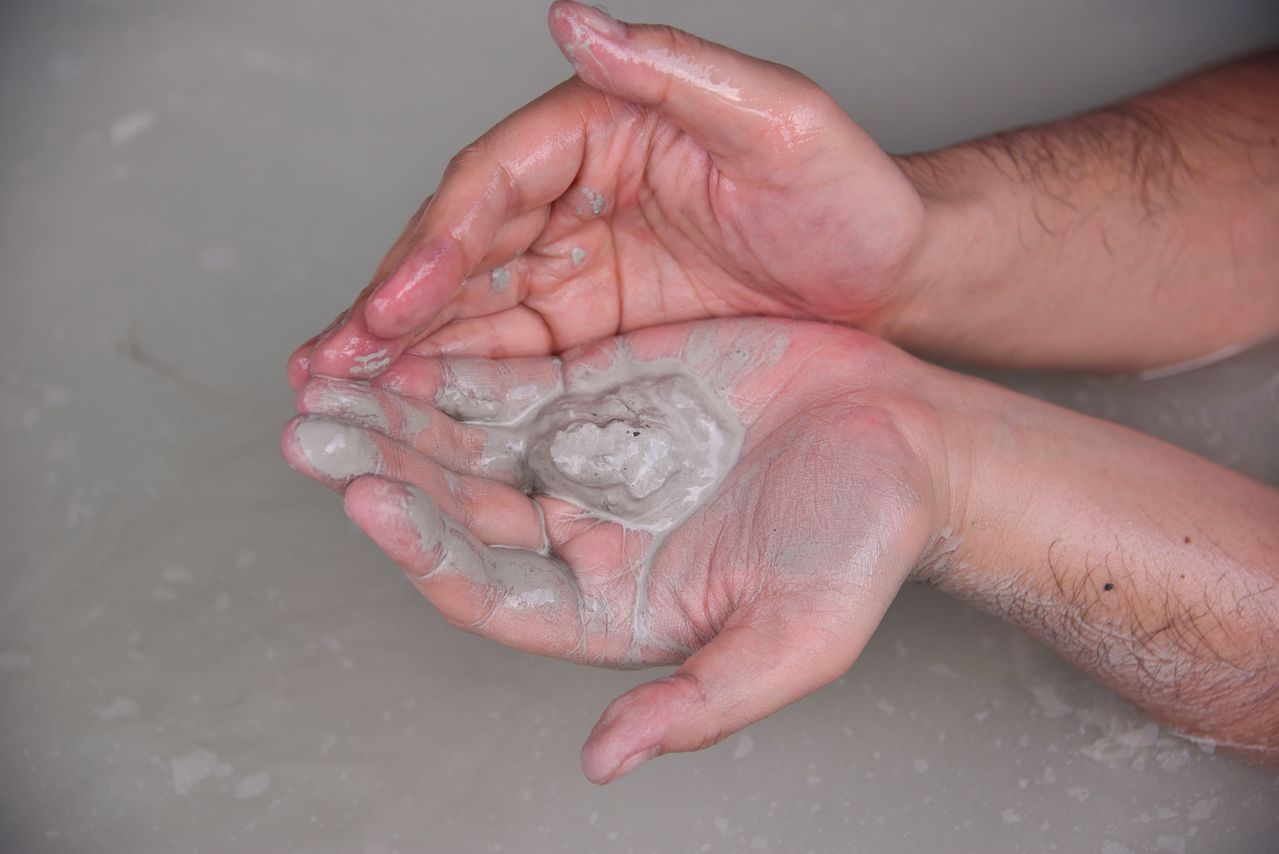 Mud accumulates at the bottom of the bath after absorbing the springwater’s essence. Some patrons pack this mud on themselves as they immerse themselves. 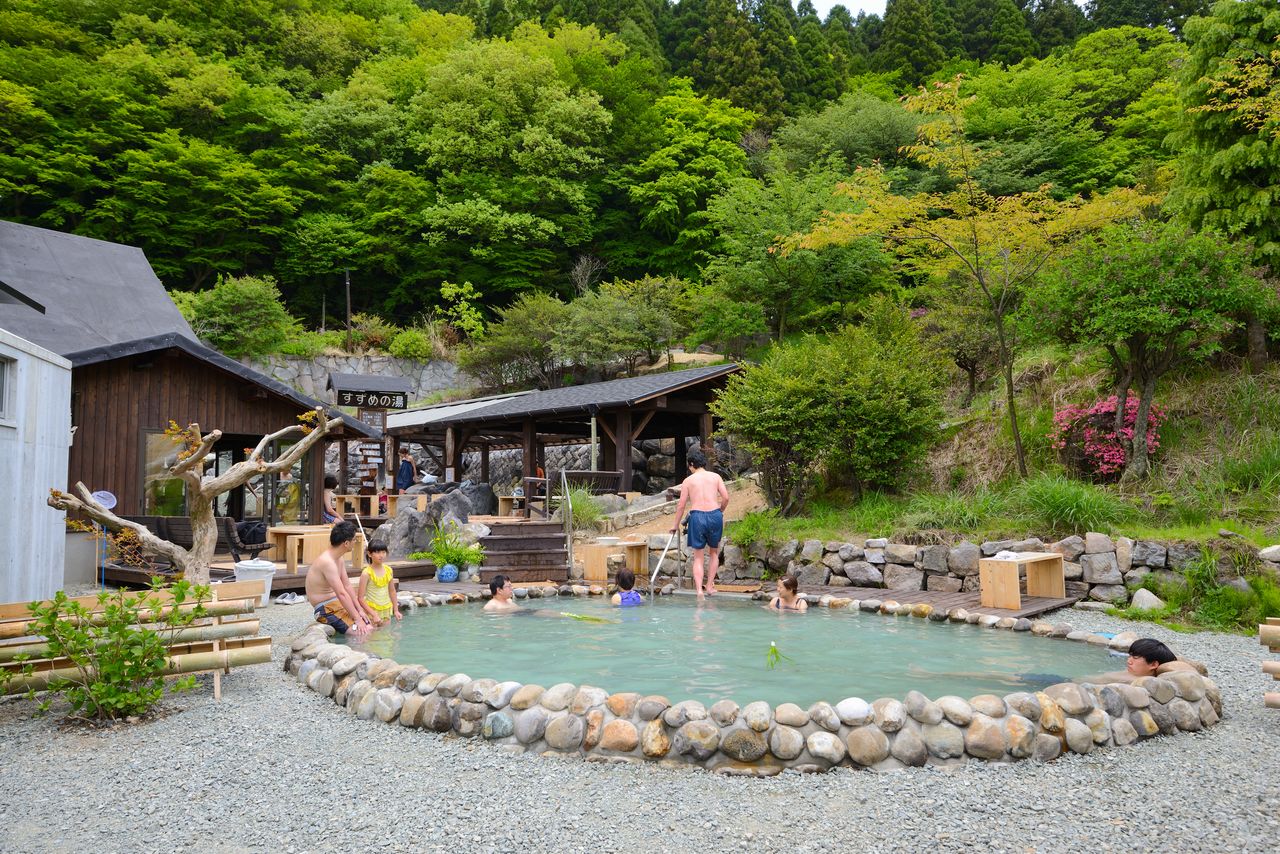 This cold mineral spring is adjacent to the open-air hot spring bath, and patrons are allowed to go back and forth as they wish. 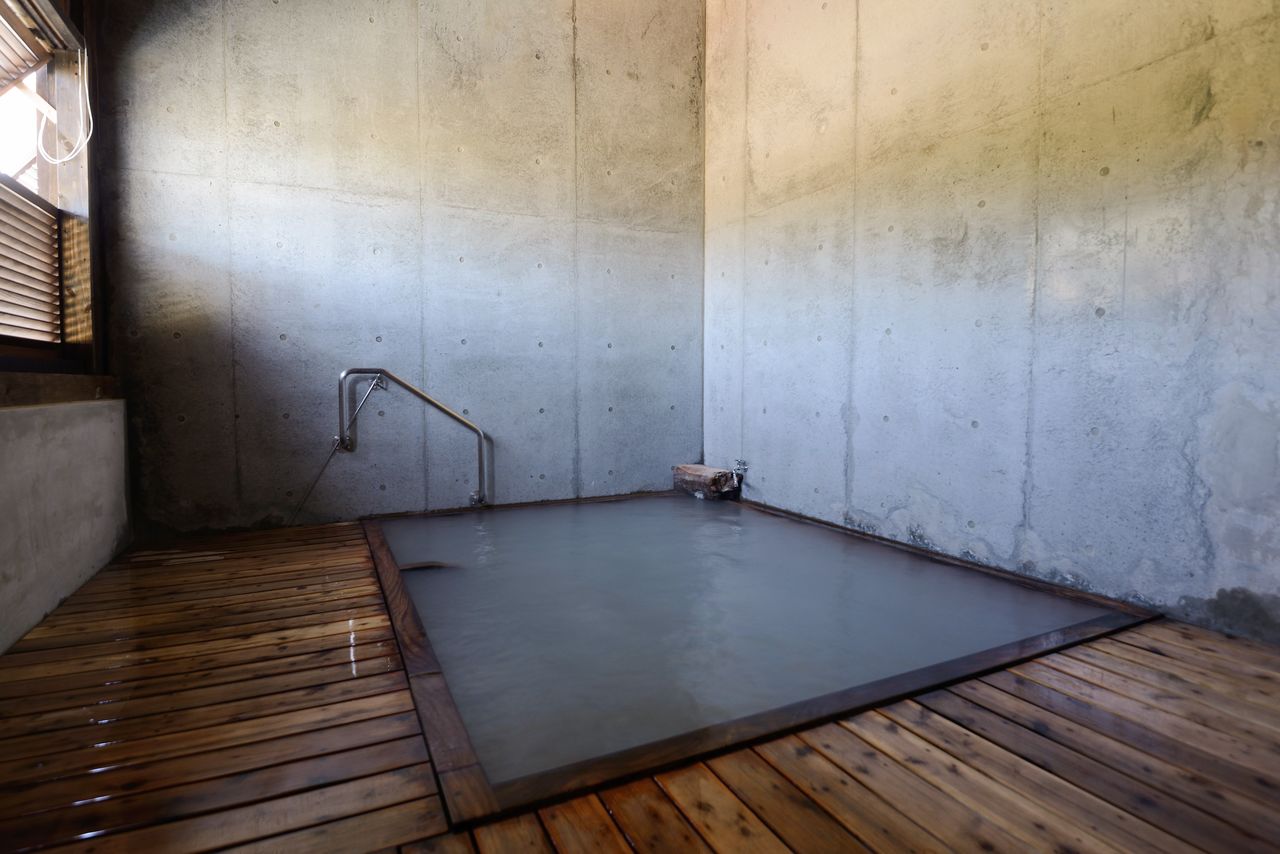 The renovated indoor bath is kept filled with water gushing forth constantly from the spring. 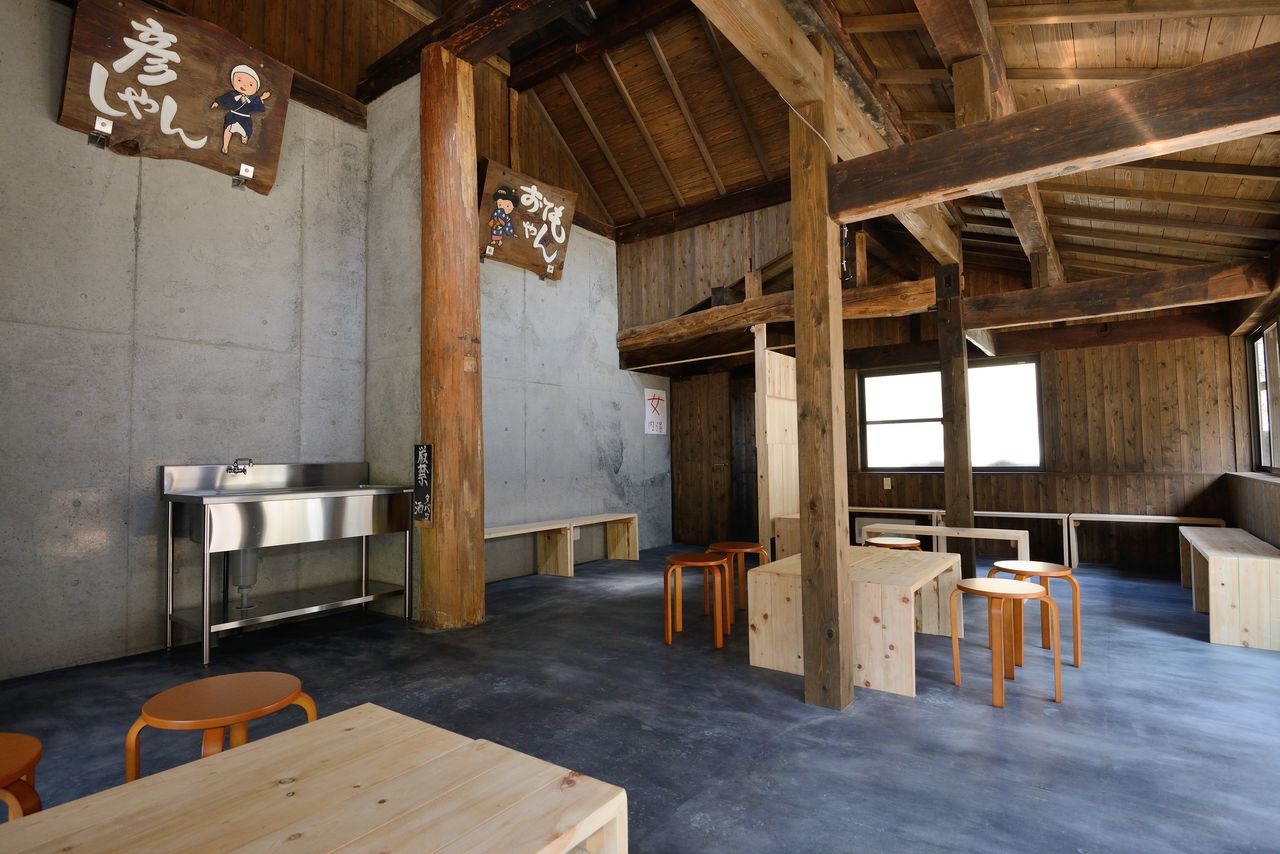 Located between the open-air and indoor baths, this new resting area is just the place to recuperate after a soak. 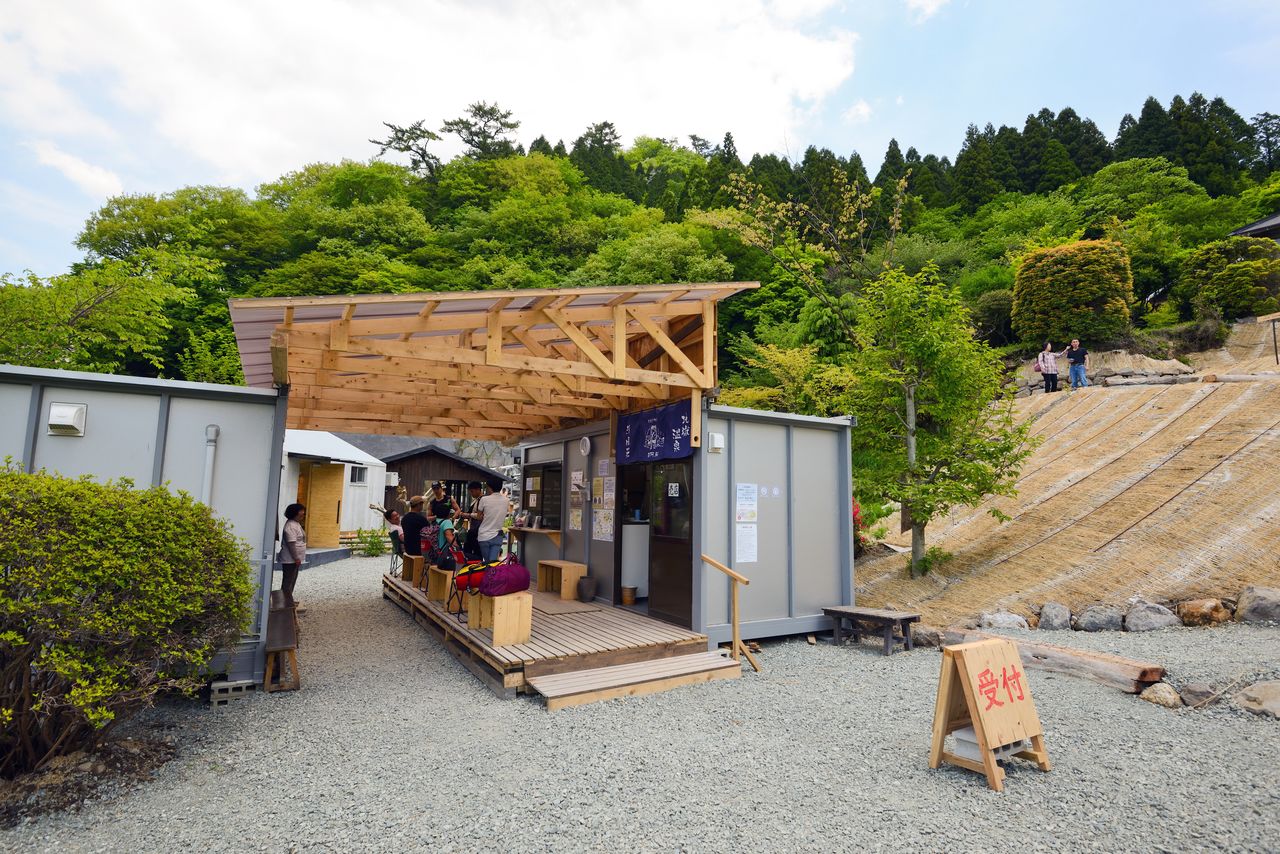 Toward an April 2020 Grand Re-opening

Another big postquake change is in the name of this ryokan itself. Between its founding in the Meiji era and the present, the sei in Seifūsō had been written with 清, a character meaning “clean” or “pure.” Now it is written with 青, a character that has the same reading but instead means “blue.”

While the primary temblor of the Kumamoto Earthquake had a disastrous impact on many of the spa’s buildings, the downpours that followed two months later inflicted far worse damage by bringing precipitation on a par with the highest recorded in the area to date. Landslides engulfed some 70% of the land area and cut off road access, causing significant setbacks in both disaster recovery and day-to-day operations. As the recovery plan progressed, a decision was made to remove the left-hand part of the character, a radical signifying “water,” from the originally used sei, retaining the pronunciation but changing the interpretation. The intent was to always remember the disaster, while at the same time marking the beginning of the story of new lodgings on the site. 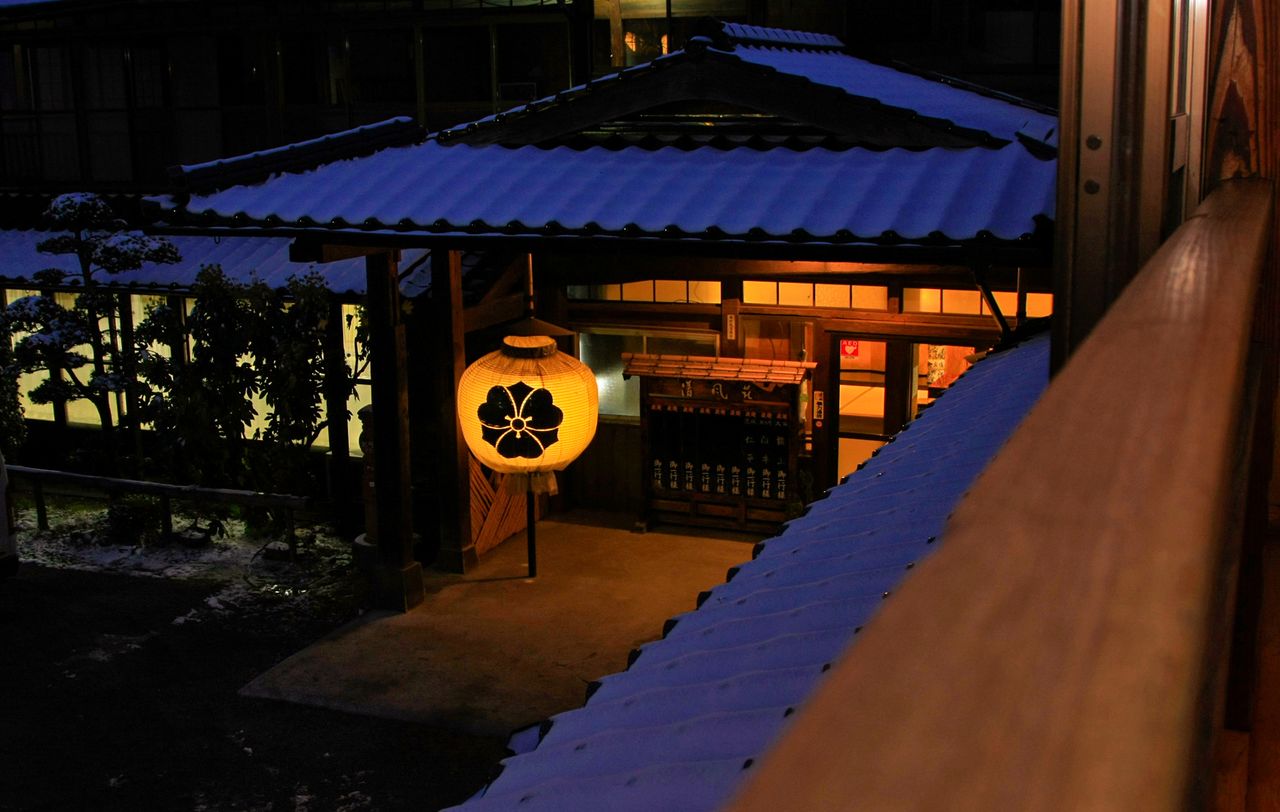 The ryokan entrance, prior to the quake, promised a quiet bathing experience in an exclusive atmosphere. (Courtesy of Seifūsō) 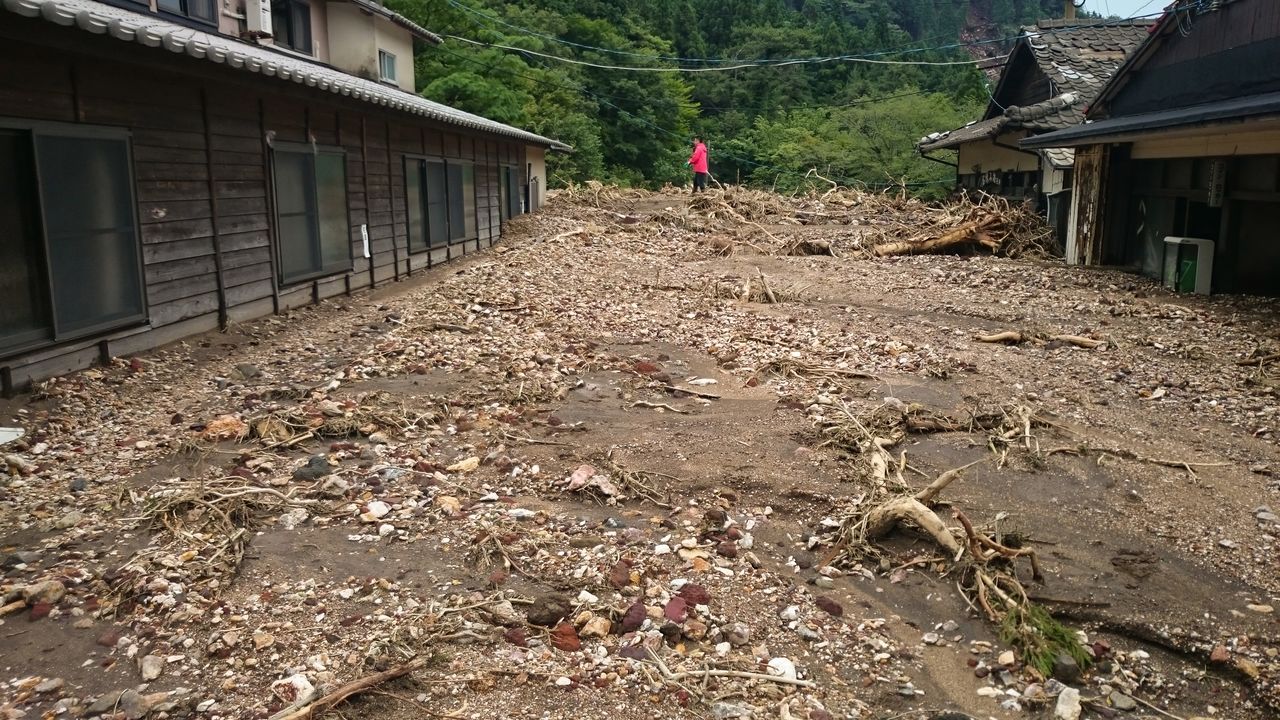 The aftermath of the downpours of June 2016. Much of the grounds were buried by landslides.

Looking back at the events of three years ago, Kawazu Kenji, vice president of the company that operates Seifūsō, notes that the hot spring water bubbling up from beneath the baths were the impetus for the restoration of the ryokan.

“The sight of the buildings after the landslides hit was hard to take,” he says. “But the waters of Suzume-no-yu kept on bubbling up as strongly as ever. The thought struck me that we could recover so long as this hot spring of ours didn’t dry up.” 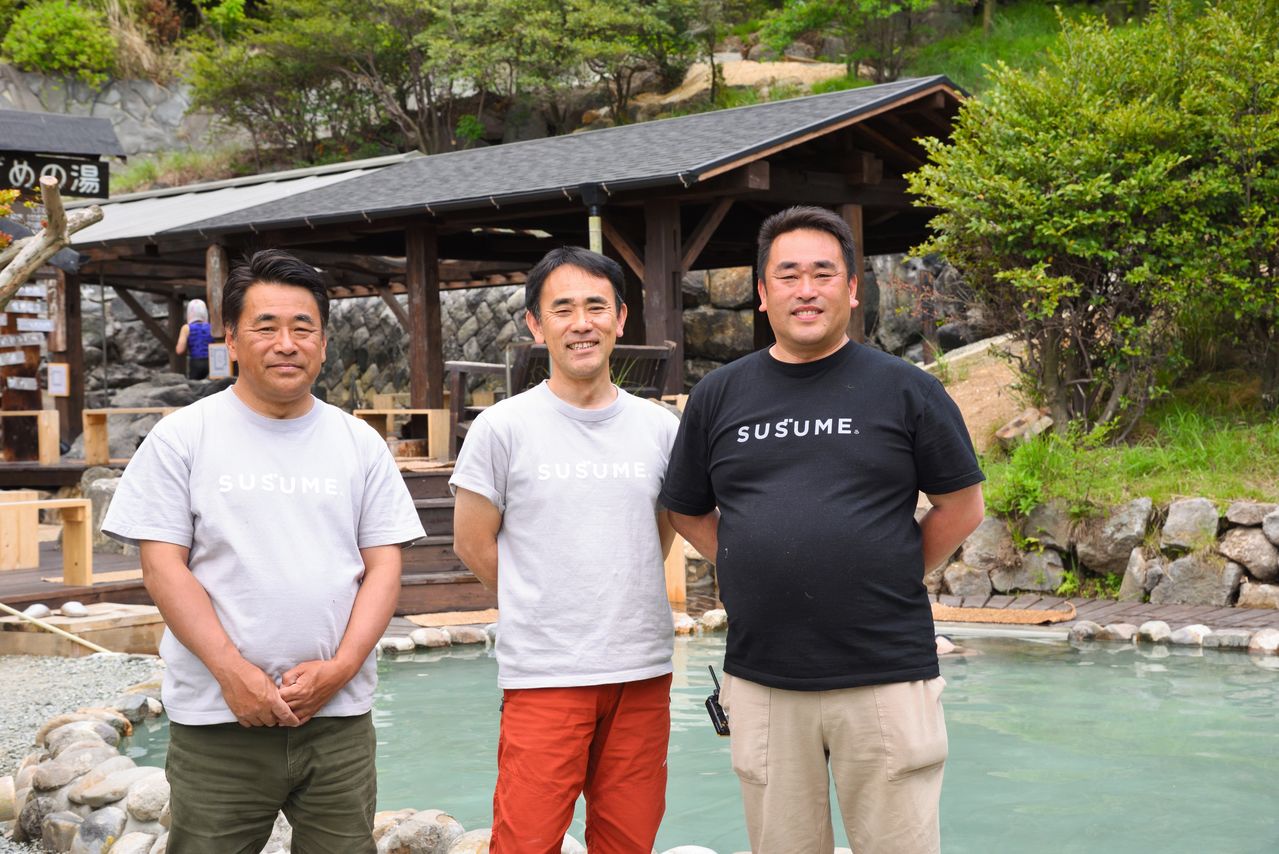 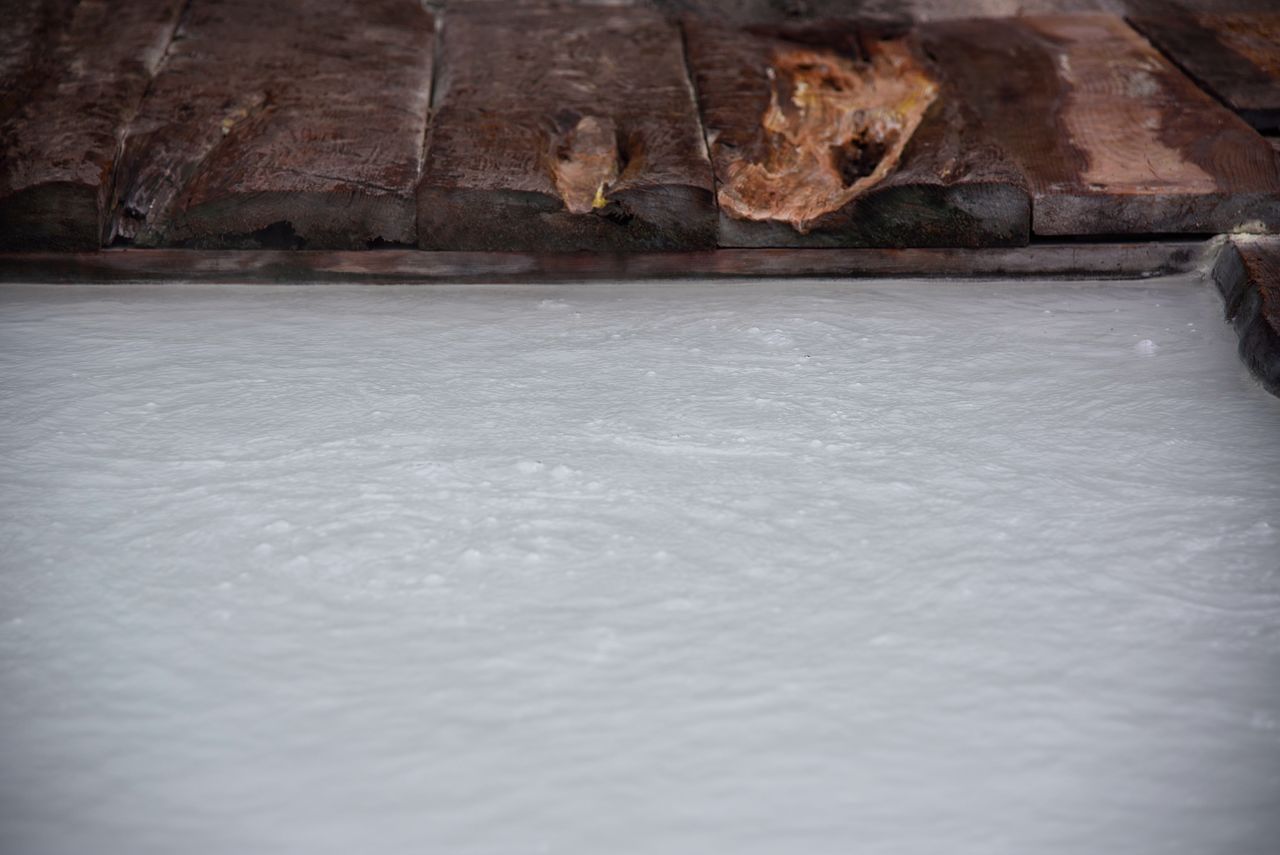 The Suzume-no-yu spring continues to bubble up to the surface, disaster or no disaster. 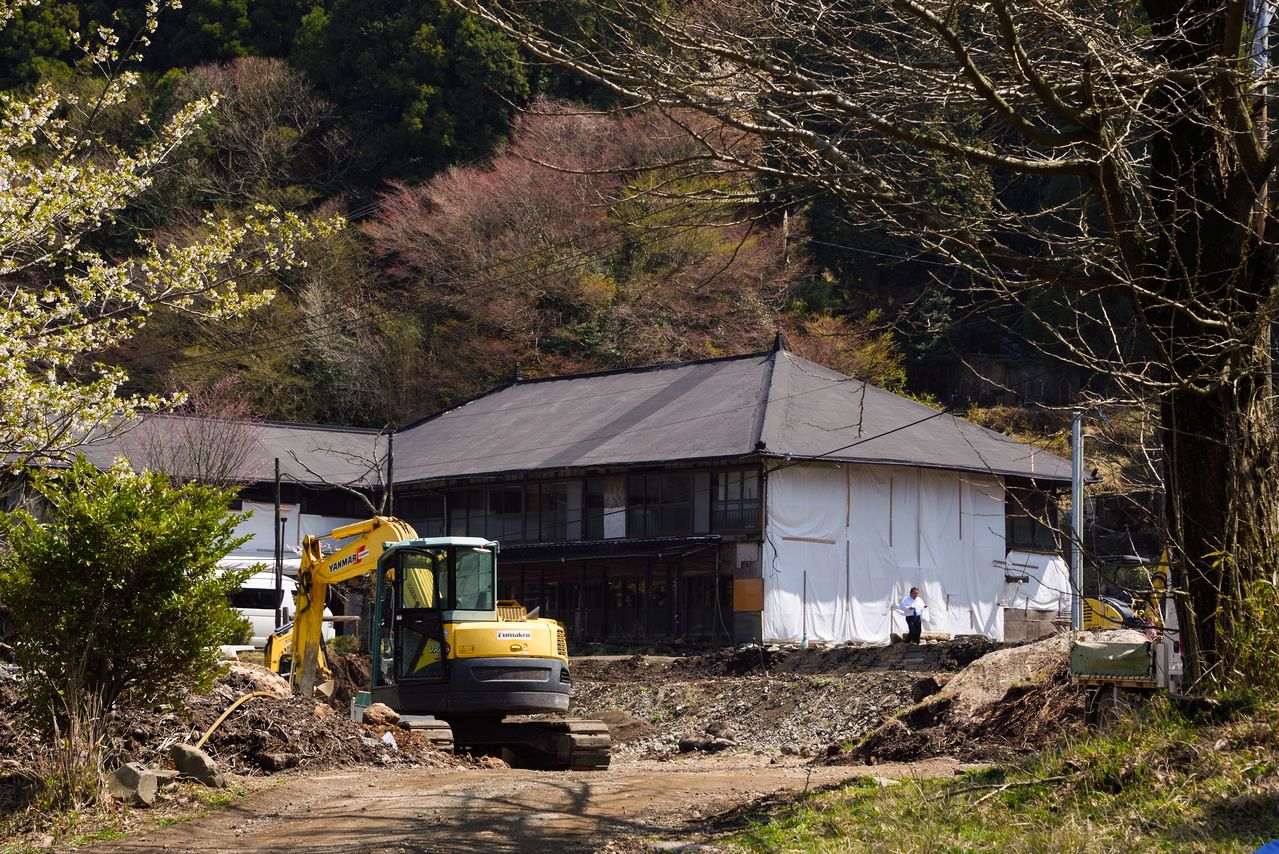 As of this writing, work continues on the ryokan, the main structure of which is at far left in this photo.

In 2019, restoration work on Suzume-no-yu was completed, and patrons from within and outside Kumamoto Prefecture alike arrived en masse during the 10-day Golden Week holiday period spanning late April to early May. The Kita-Tarutama-sen village road leading to the hot spring is still being rebuilt, and thus, is open to traffic only during daylight hours. Additional access restrictions were enacted due to an eruption on Mount Aso that occurred at the same time as the reopening of the hot spring. It has been reported, however, that Seifūsō was completely unaffected, owing to the Nakadake crater being over 4 kilometers away. According to Kawazu, the grand reopening of the lodgings is scheduled for April 2020, four years after the quake. 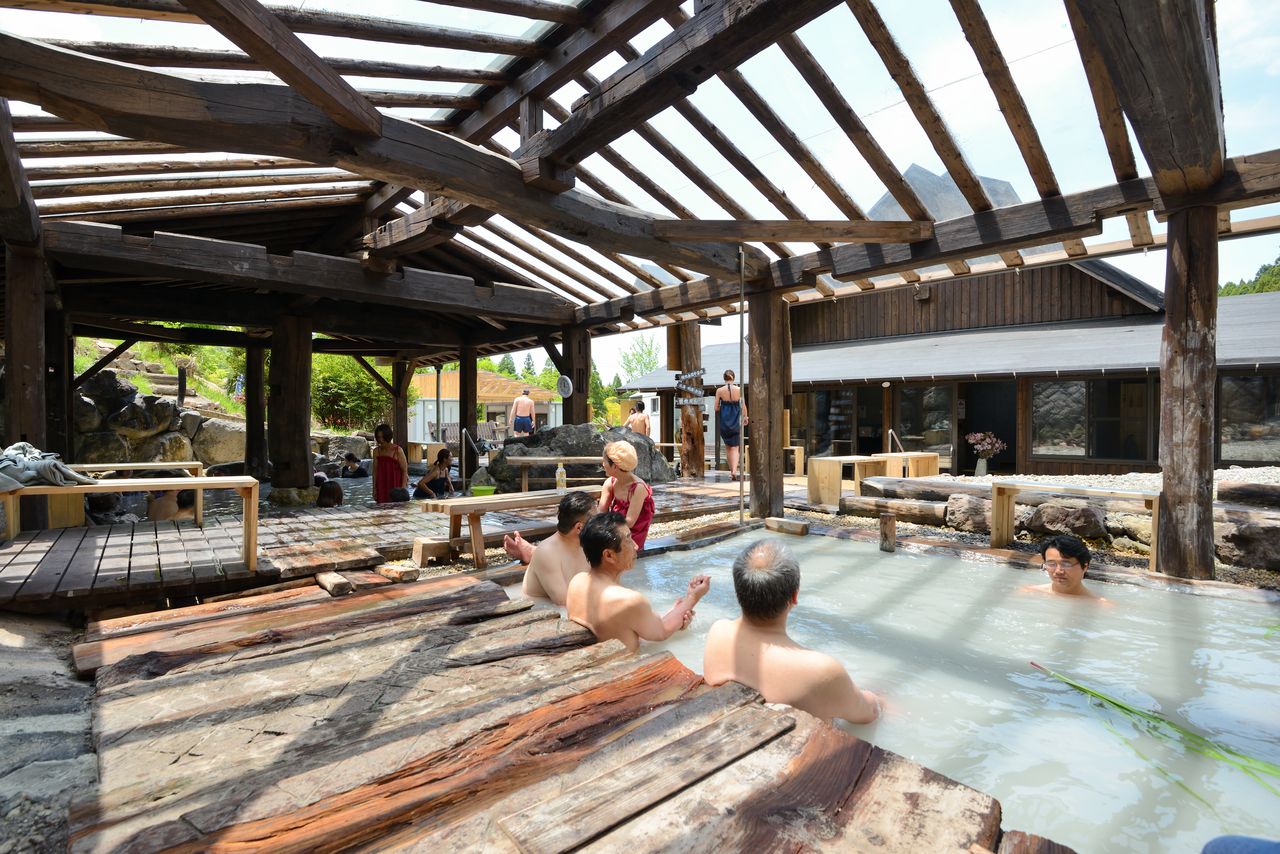 The present structure of Suzume-no-yu has a wide-open feel. Patrons visited from within and outside Kumamoto Prefecture during the Golden Week holidays in April–May 2019, soon after the reopening of the hot spring.