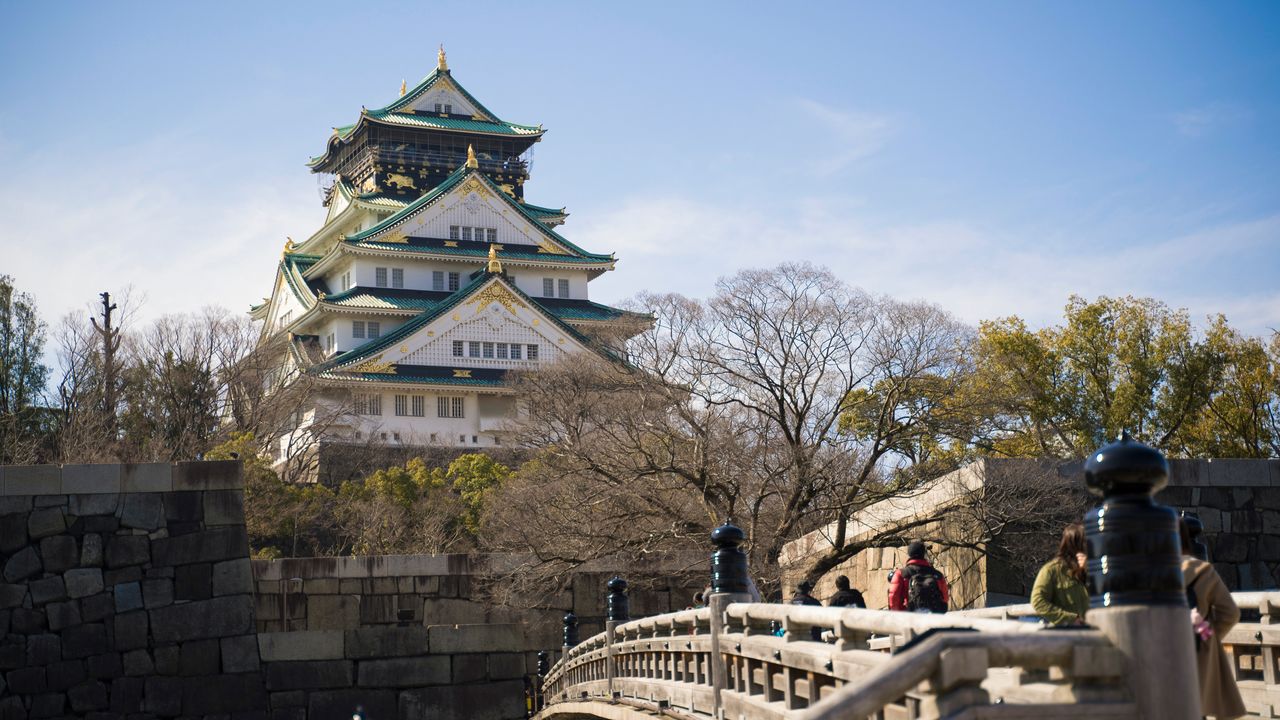 Travel Jul 17, 2019
Osaka Castle, a staple tourist attraction in the Japanese city, attracts more than 2.5 million visitors every year. Osaka Castle Park is also home to a number of important cultural properties and is a favorite flower-viewing spot for residents and visitors alike.

Preeminent landmark Osaka Castle stands smack in the center of the metropolis. It is also a must-see attraction on every visitor’s list. The ramparts and keep are the centerpiece of Osaka Castle Park, a favorite destination for leisure and relaxation. The park, a vast expanse of greenery with gardens and open spaces, features cultural and sports facilities like Osaka Castle Hall, an arena, a baseball field, and a jogging track. 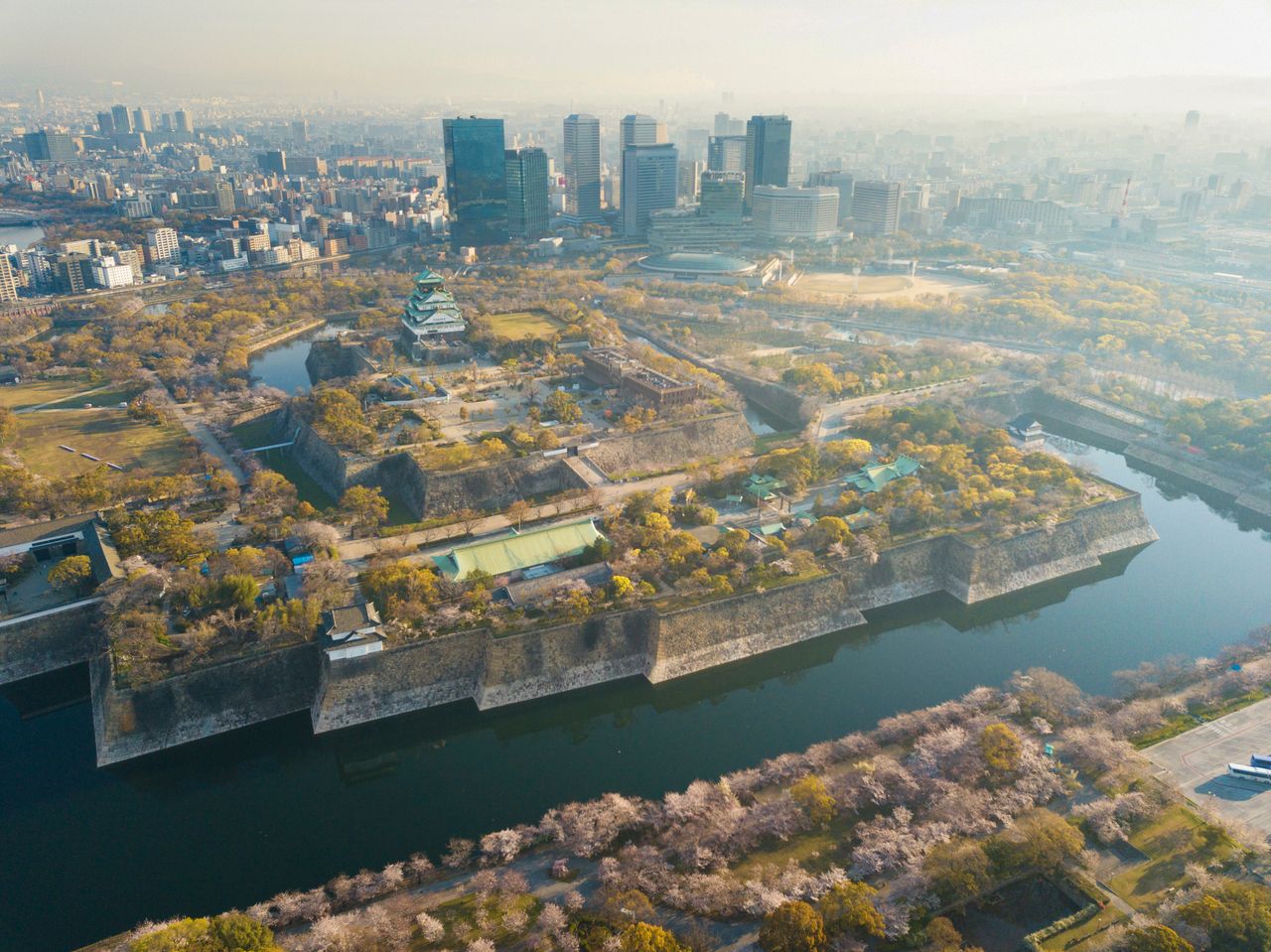 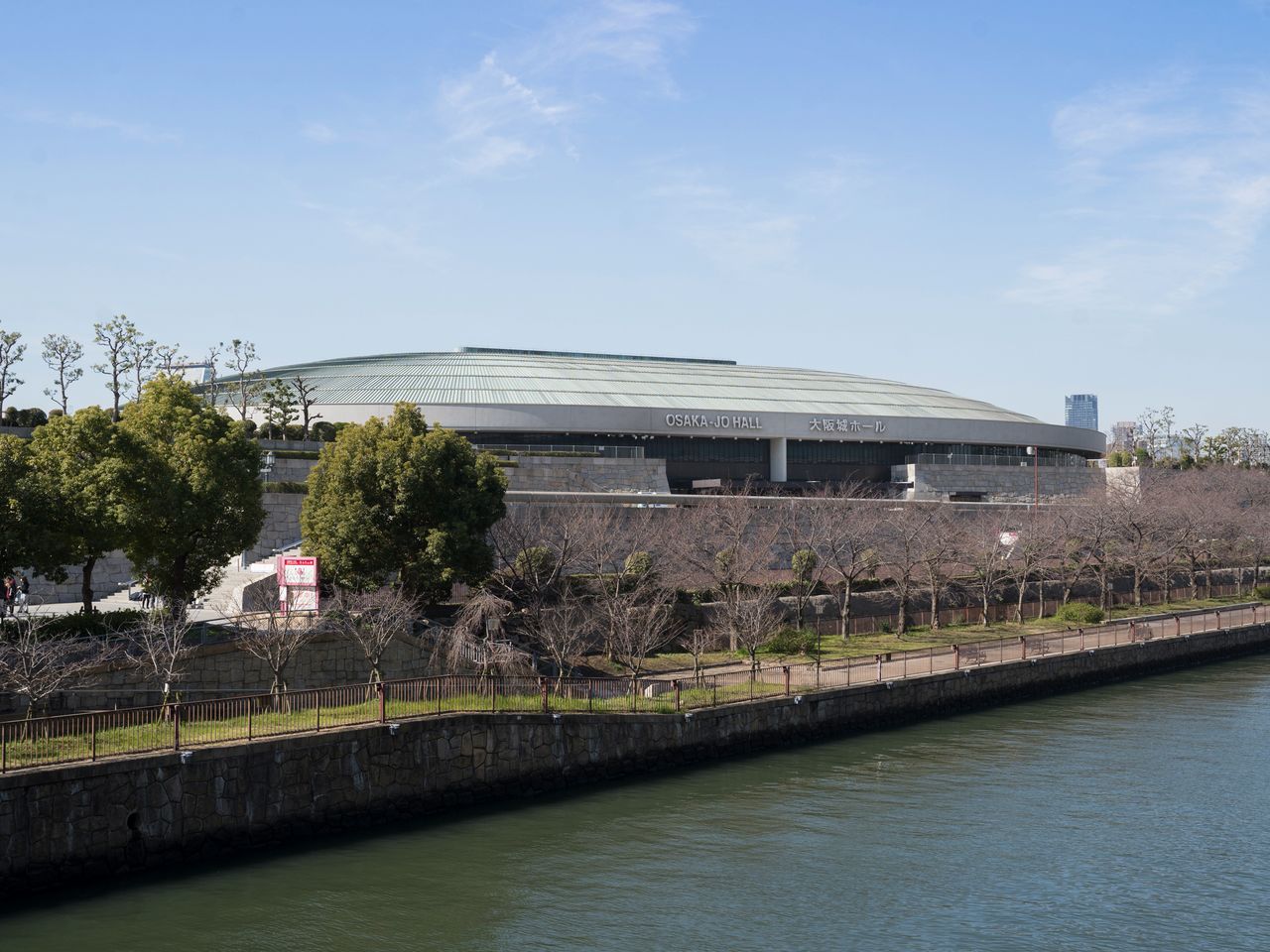 Osaka Castle Hall is used for many events, from sports to concerts and university entrance ceremonies.

Panoramic Views of the City

The castle’s most impressive structure is the keep. In 2017, it was visited by over 2.7 million people, which is more than any other Japanese castle in recent years.

Many people associate Osaka Castle with warlord Toyotomi Hideyoshi. However, the first castle built by Hideyoshi in 1581 lasted only 32 years before it was burned down in 1615 during the second Siege of Osaka in which his son was defeated. The Tokugawa government took control of the city, demolished the stone ramparts and moats built during Hideyoshi’s time, and mobilized daimyō across the country to provide workers to build a new castle. The stone ramparts and moats that we see today are the product of their labors. But this second castle also met with misfortune, burning down in 1665 after being struck by lightning only 36 years after its completion. The ruins lay untouched for nearly 200 years.

The Osaka Castle that stands today is a reproduction completed in 1931. The unorthodox hybrid construction consists of a keep with its exterior modeled on Hideyoshi’s original castle building— as depicted in a folding screen showing the second Siege of Osaka—placed atop the foundations built by the Tokugawa clan. 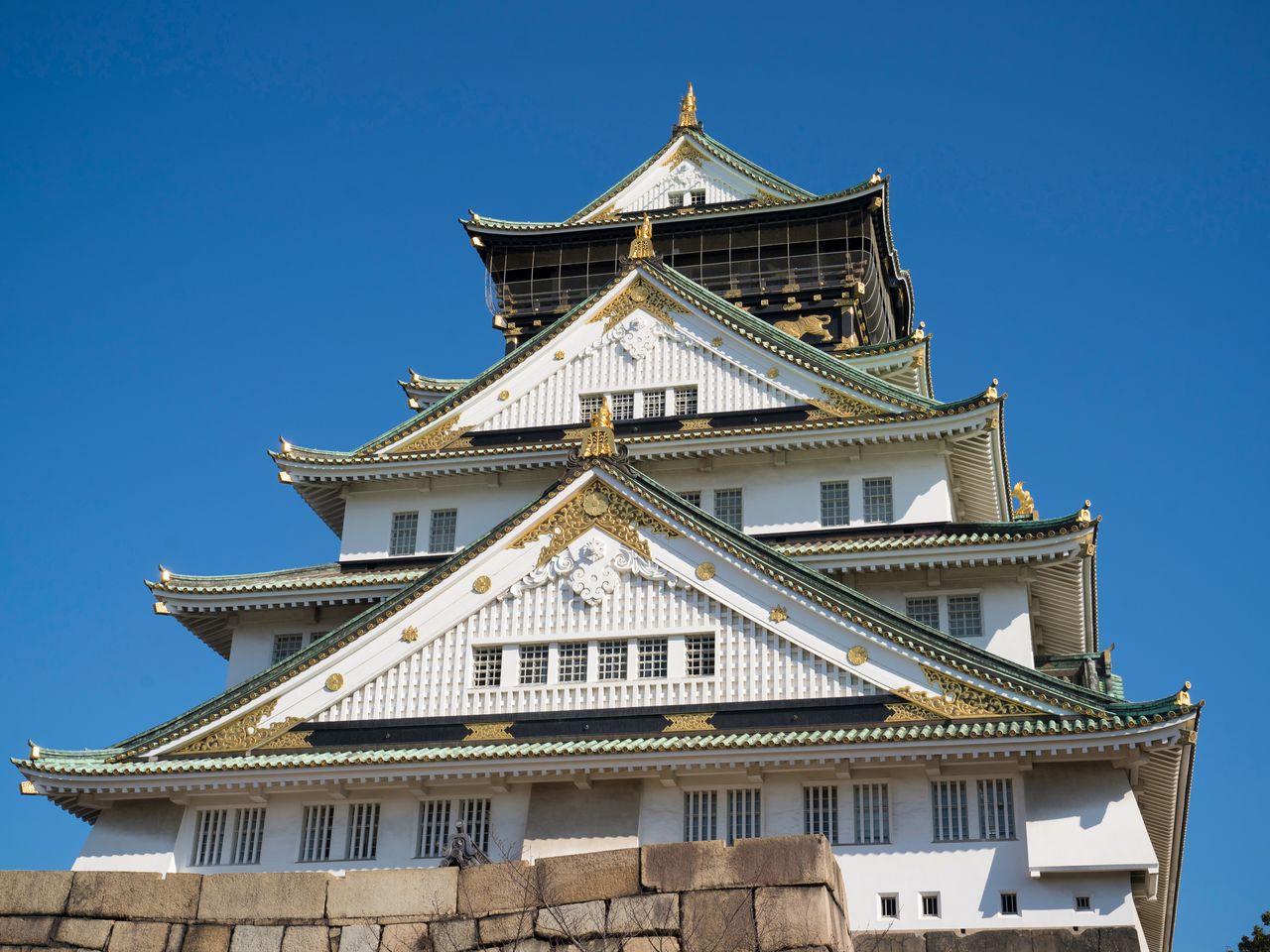 The design of today’s keep is based on the castle depicted on a folding screen of the second Siege of Osaka.

The keep appears to be a five-story structure on the outside but has eight stories inside. The building is like a giant repository of historical materials, with panels and dioramas describing the life of Hideyoshi and the social and cultural background of his times on the various floors. The second floor includes a display of a golden tiger like those that decorate the black walls of the keep’s uppermost story, and a life-size replica of the castle’s shachihoko carp-like roof ornaments. Visitors can try on reproductions of helmets and surcoats worn by warriors of the Warring States period (1467–1568) for a fee, an attraction popular with foreign visitors who want to post a fun picture on social media. 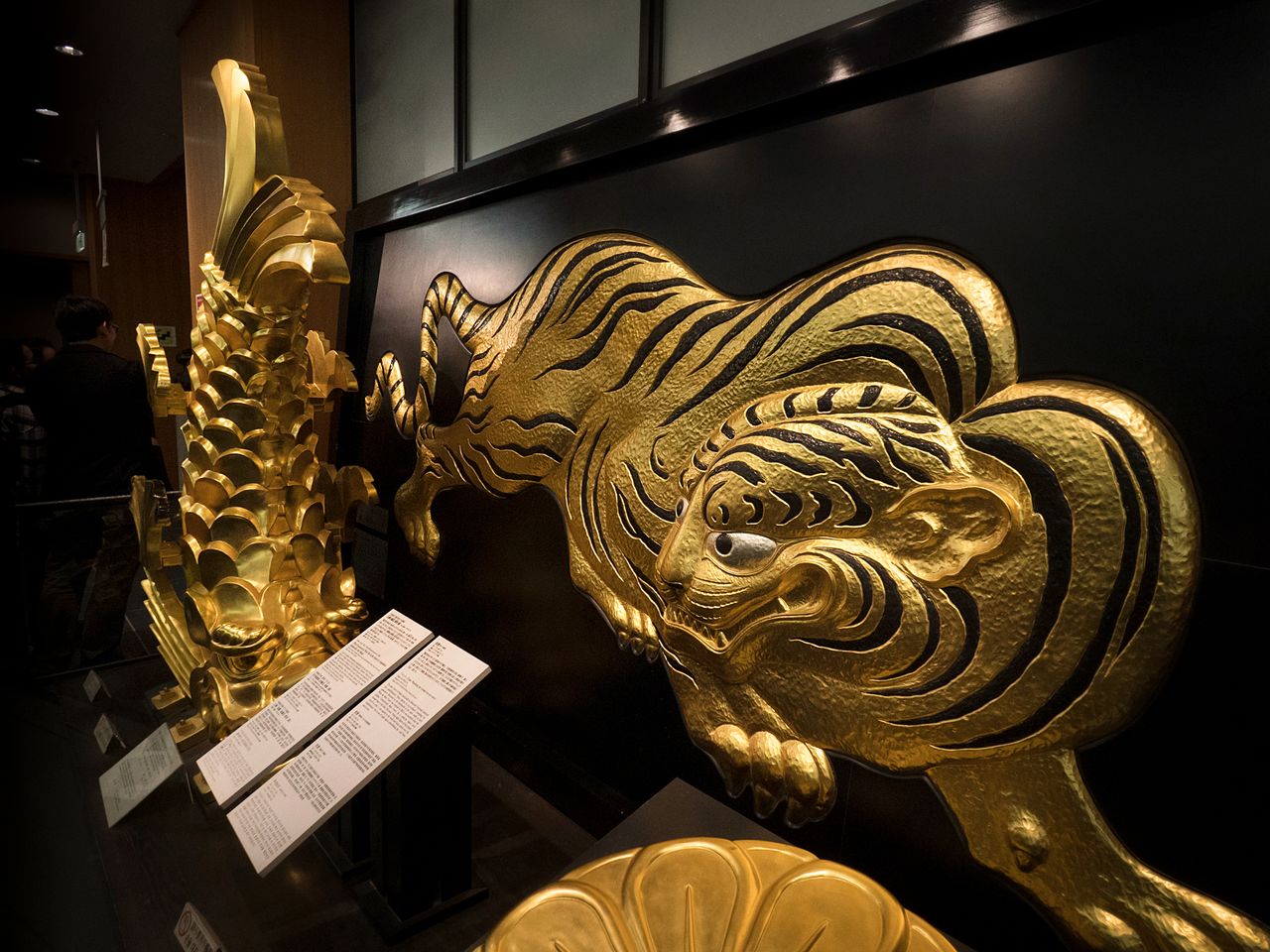 A golden shachihoko roof ornament and tiger are displayed on the second floor. 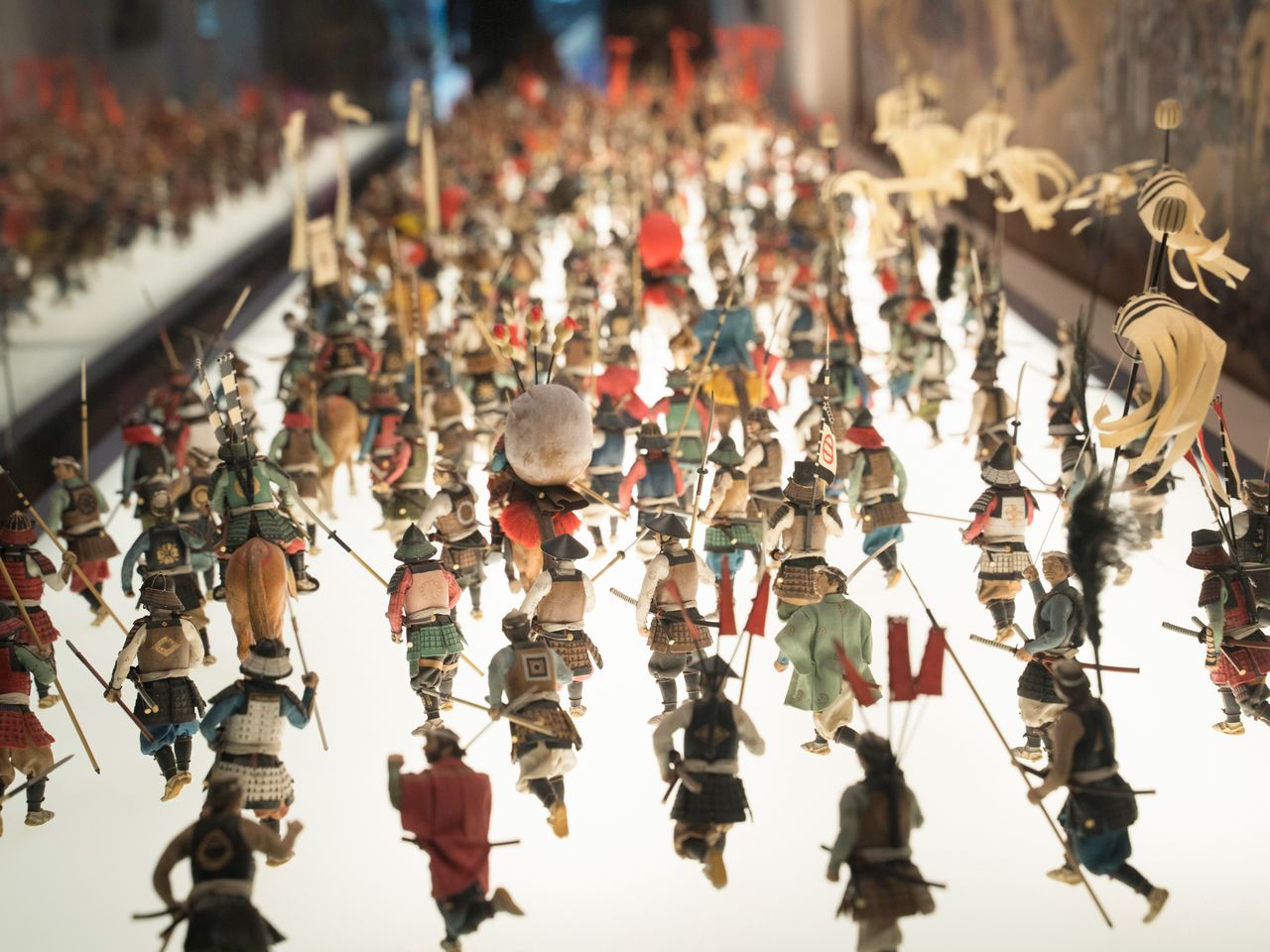 A diorama with miniature figures depicting a battle at the second Siege of Osaka. 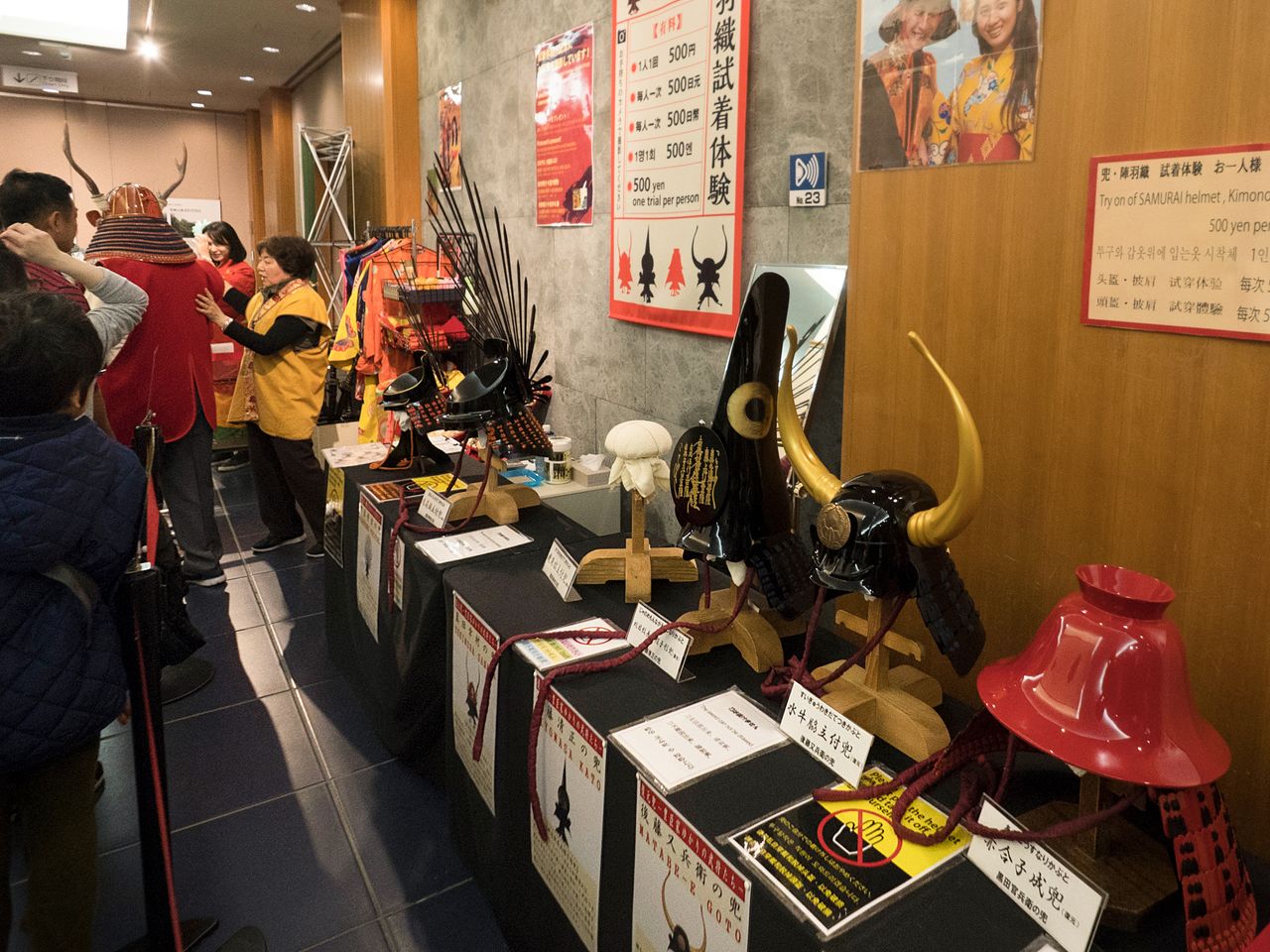 Several helmets are available for trying on, including that of Toyotomi Hideyoshi (second from right).

An observation deck encircles the eighth floor, from which visitors can enjoy a panoramic view of Osaka and the environs. Visitors usually go up to the observation deck first and use the stairs to descend to the keep’s lower levels. This can mean a long lineup for the elevator going up, so taking the reverse course can save time and ease the strain of waiting. It is best to start by viewing the exhibits on the first floor and go up the stairs to each successive level before reaching the top of the keep. After enjoying the wonderful view from the top, it is possible to descend in the elevator with only minimal waiting. 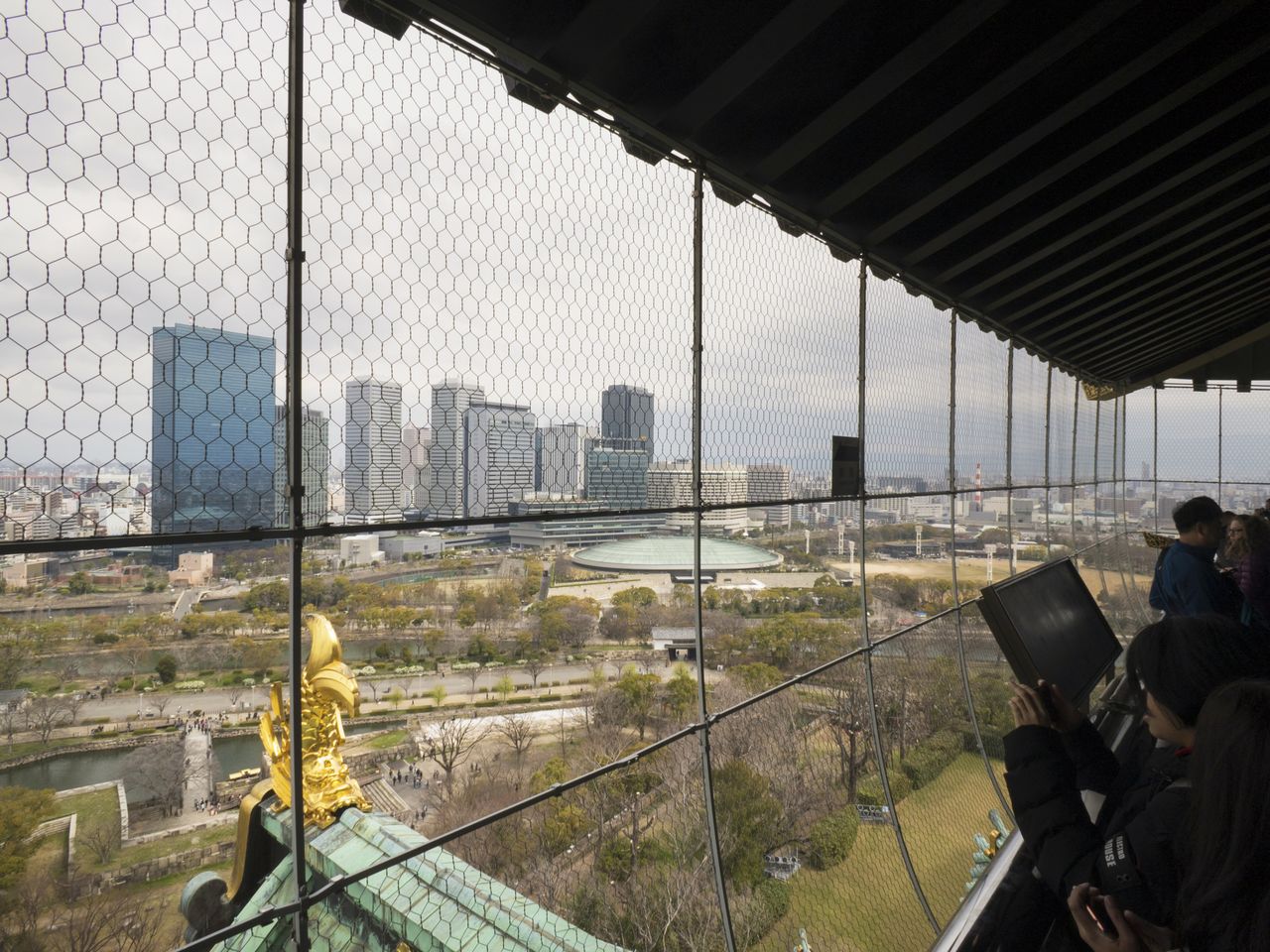 A walkway goes all around the eighth floor, offering panoramic views of Osaka. 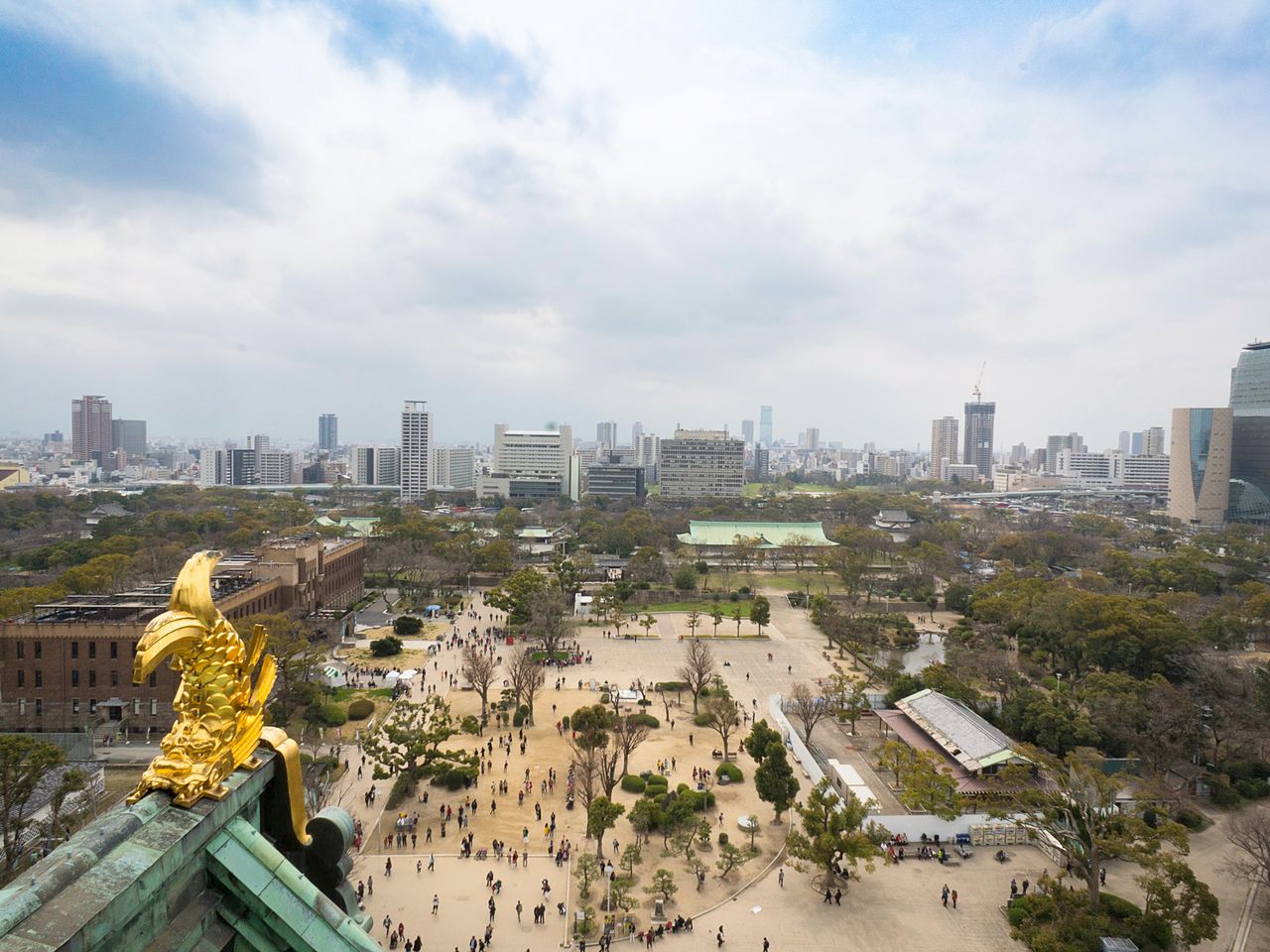 Take a photo of the Osaka skyline with a shachihoko roof ornament in the foreground.

Lots to See and Do in Osaka Castle Park

Many castle buildings other than the keep were also lost to fire during unrest at the time of the Meiji Restoration and World War II bombings. Even so, 10 important cultural properties remain within the castle’s main and outer ramparts. Among these are the Sakuramon Gate, the Ōtemon Gate, five turrets including the Tamon Turret, two storehouses, and the roof over the Kinmeisui well. All of these are original structures that escaped the various conflagrations that befell Osaka Castle.

Some of these structures are open to the public for limited periods. In 2019, visitors can view the inside of the Tamon Turret and the Sengan Turret, as well as the Enshōgura gunpowder storehouse on weekends and public holidays until November 24. 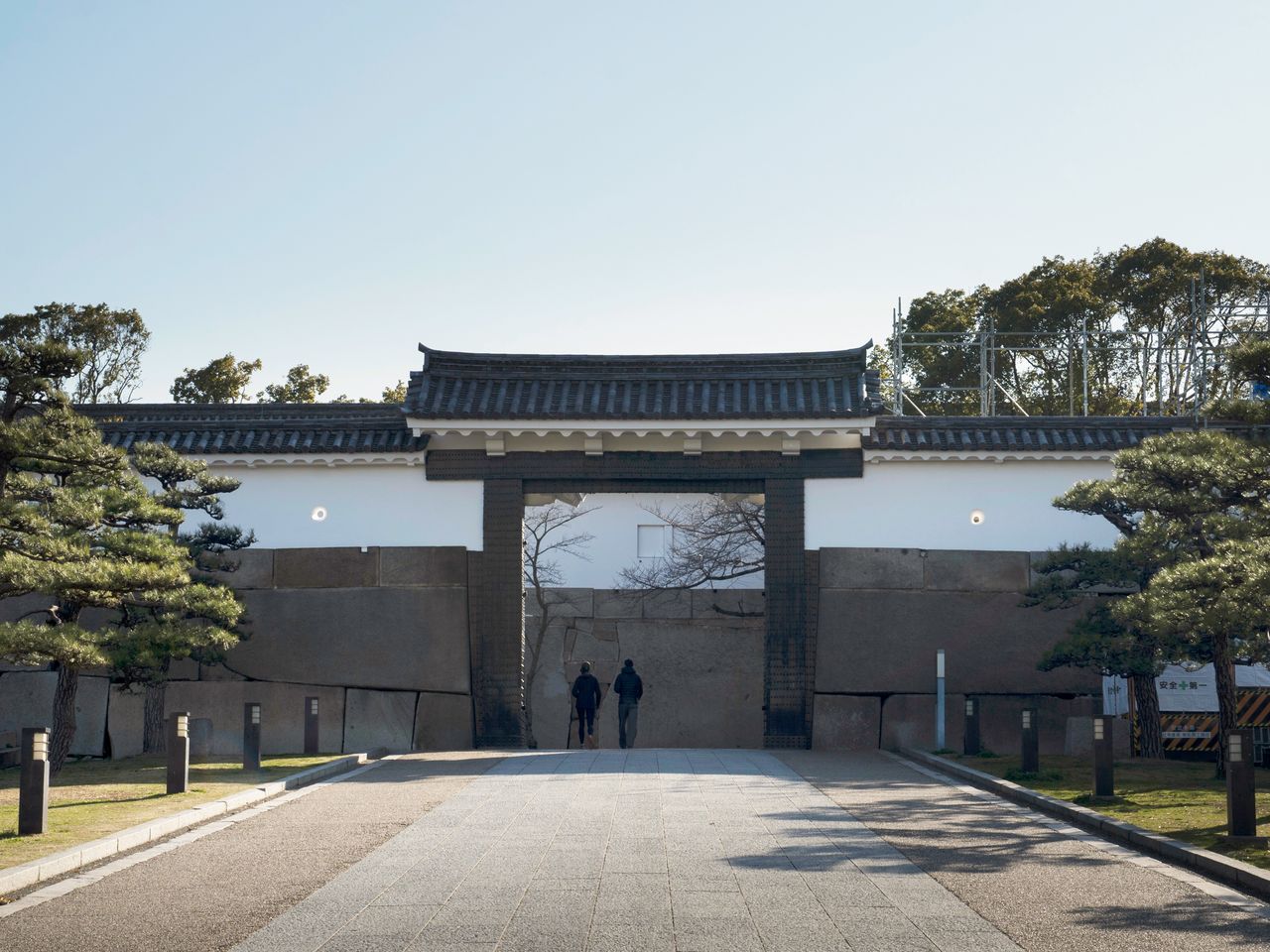 The Ōtemon Gate at the castle’s front entrance. 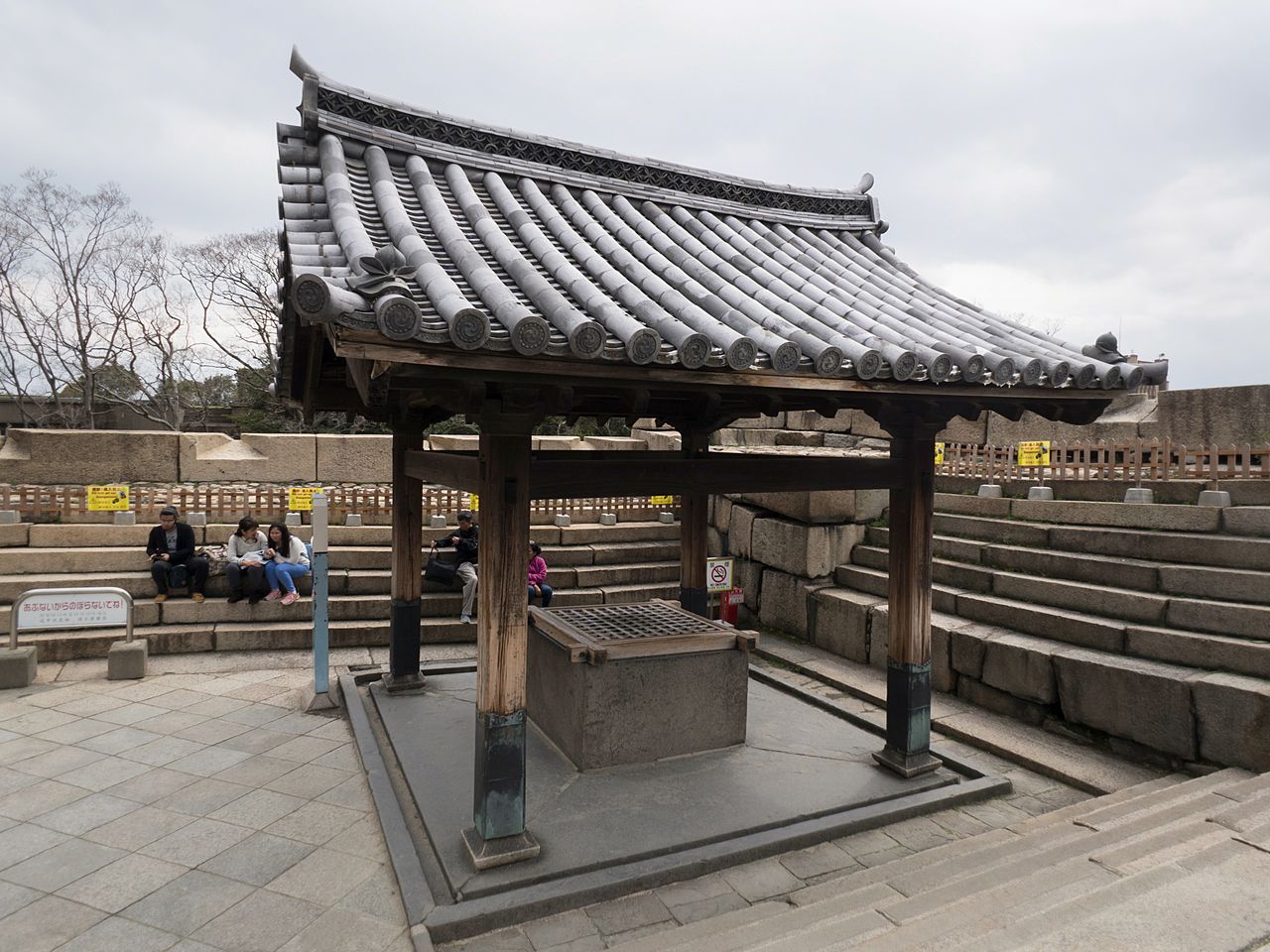 The roof over the Kinmeisui well, erected in 1626. 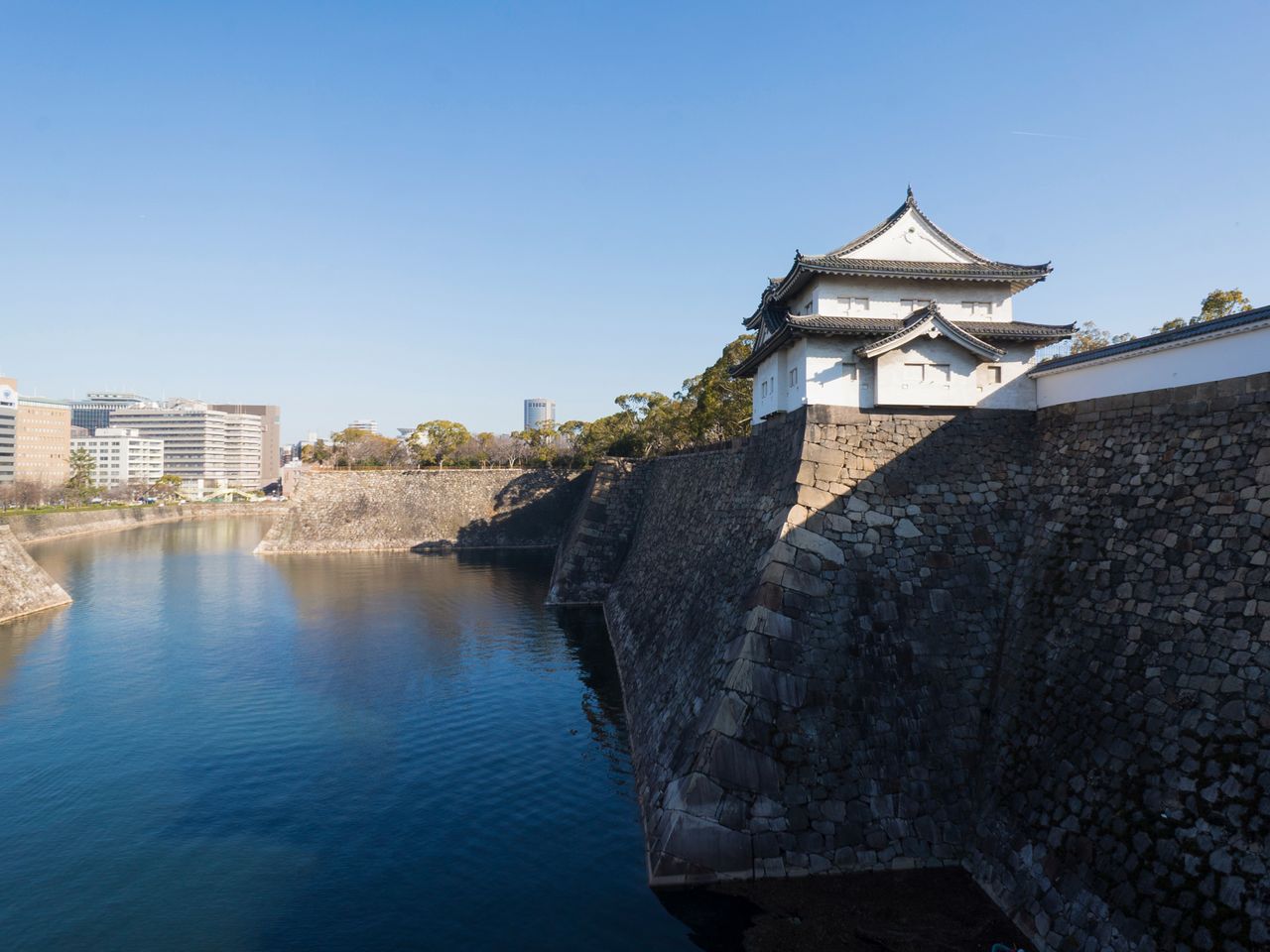 The Sengan Turret, one of the few original structures remaining after repeated calamities.

Osaka Castle is noted for gigantic stones used to create masugata, open spaces where troops gathered, surrounded by the stones’ sheer walls. To prevent direct entry into the castle keep, masugata have two gates set at right angles to each other. The masugata acted like a trap, forcing attacking warriors to pause before making a sharp turn, which allowed castle defenders to rain bullets or spears down on them. To prevent attackers from clambering up the walls to escape, huge smooth stones were used to surround the space.

The tako ishi inside the Sakuramon Gate is Osaka Castle’s largest, with a surface area of roughly 60 square meters and weighing an estimated 108 tons. Transporting and putting this stone into place at a time when there was no heavy construction equipment was truly an amazing feat. 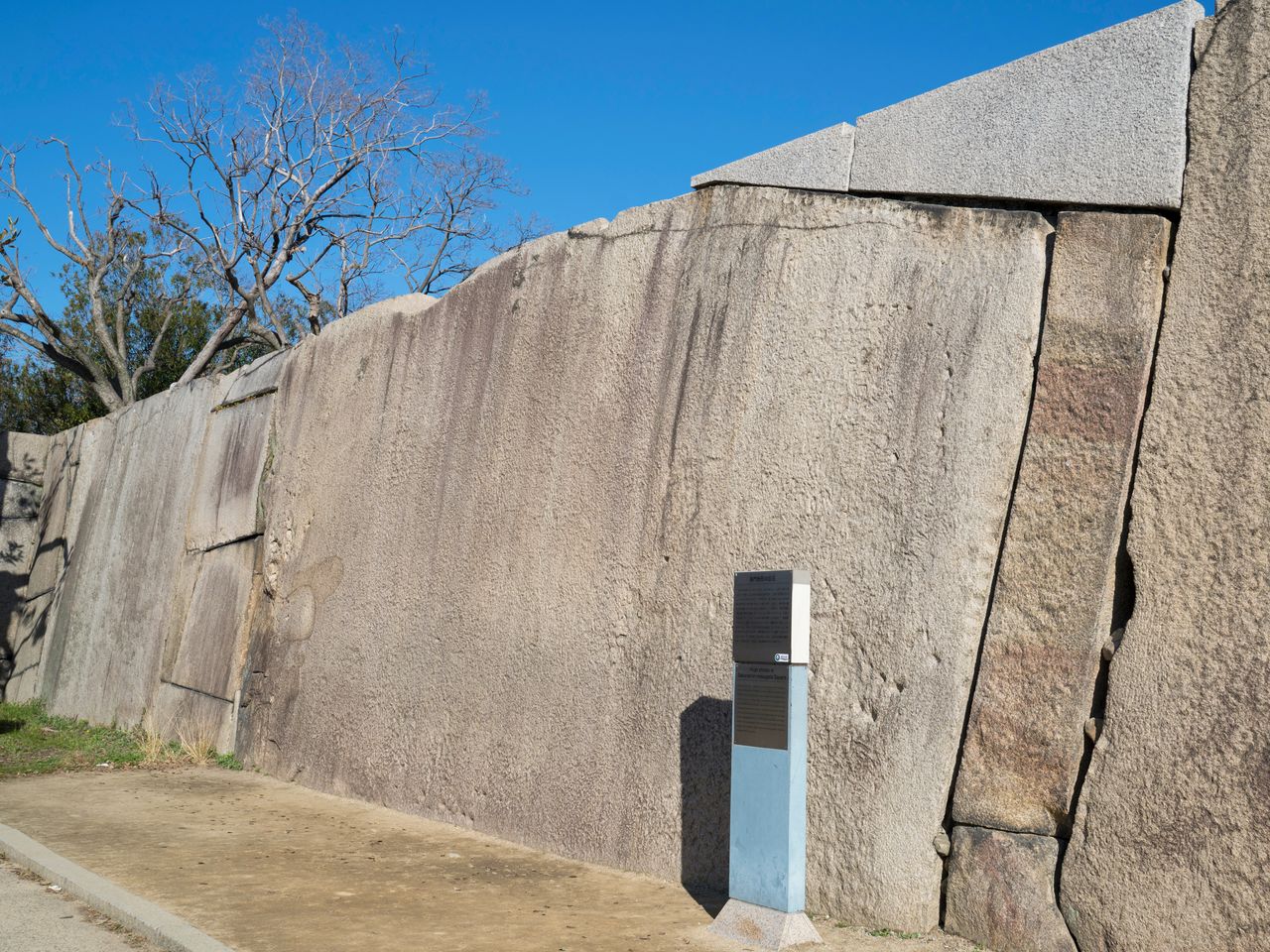 The tako ishi at Sakuramon Gate at the front entrance to the castle. 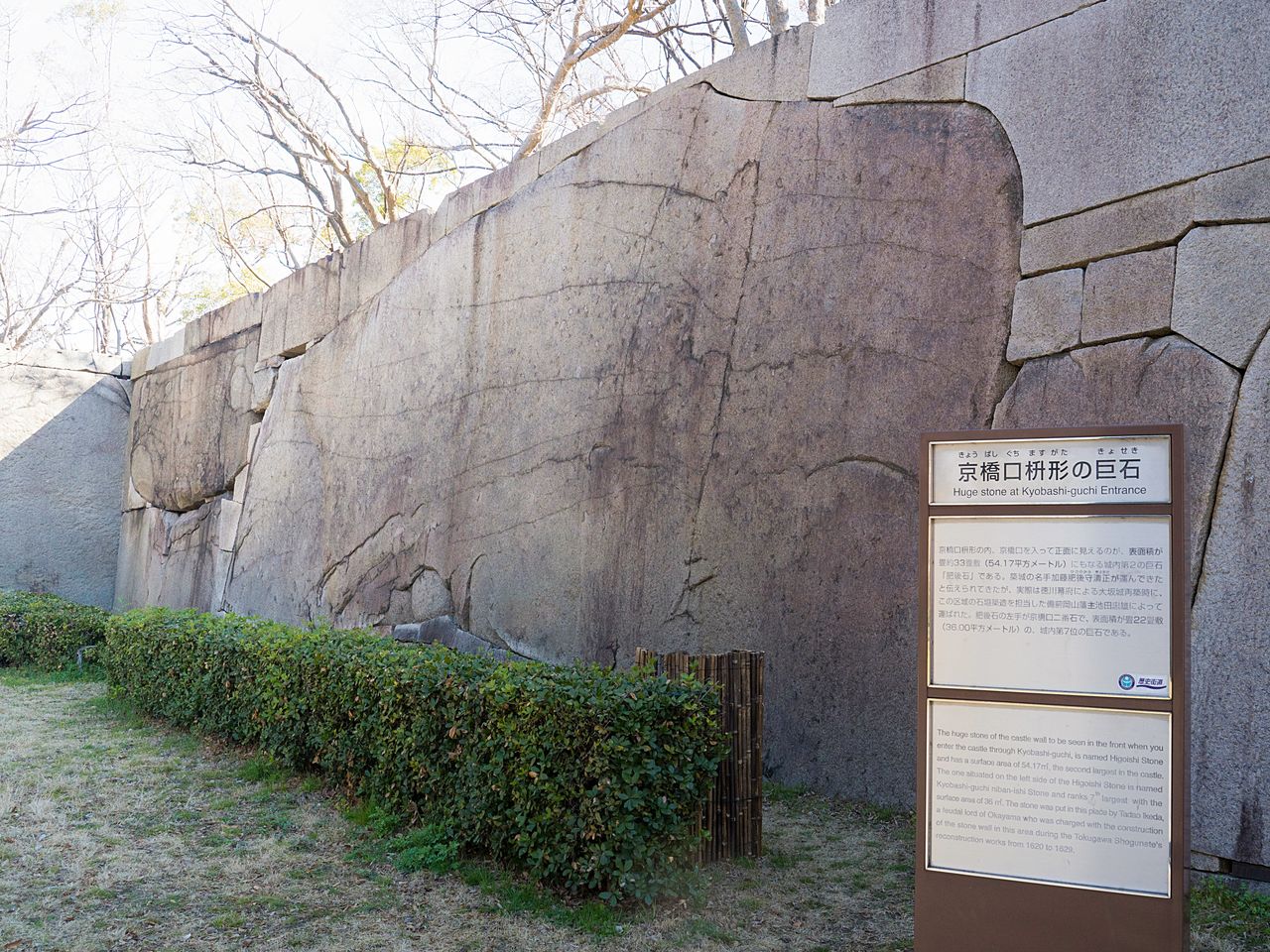 The Higo ishi that is part of the Kyōbashiguchi masugata was transported by laborers from the Bizen Okayama domain.

The gardens and open spaces of Osaka Castle Park also make it a popular spot for enjoying nature throughout the four seasons, but especially in spring, when cherry and apricot trees are in bloom. The apricot grove east of the Ninomaru ramparts is reputed to be the largest in western Japan, with 1,270 trees of more than 100 species. The park also ranks among Japan’s best 100 spots for cherry blossom viewing, with over 3,000 trees of the somei yoshino and yamazakura varieties bathing the park in pale pink blossoms during spring. 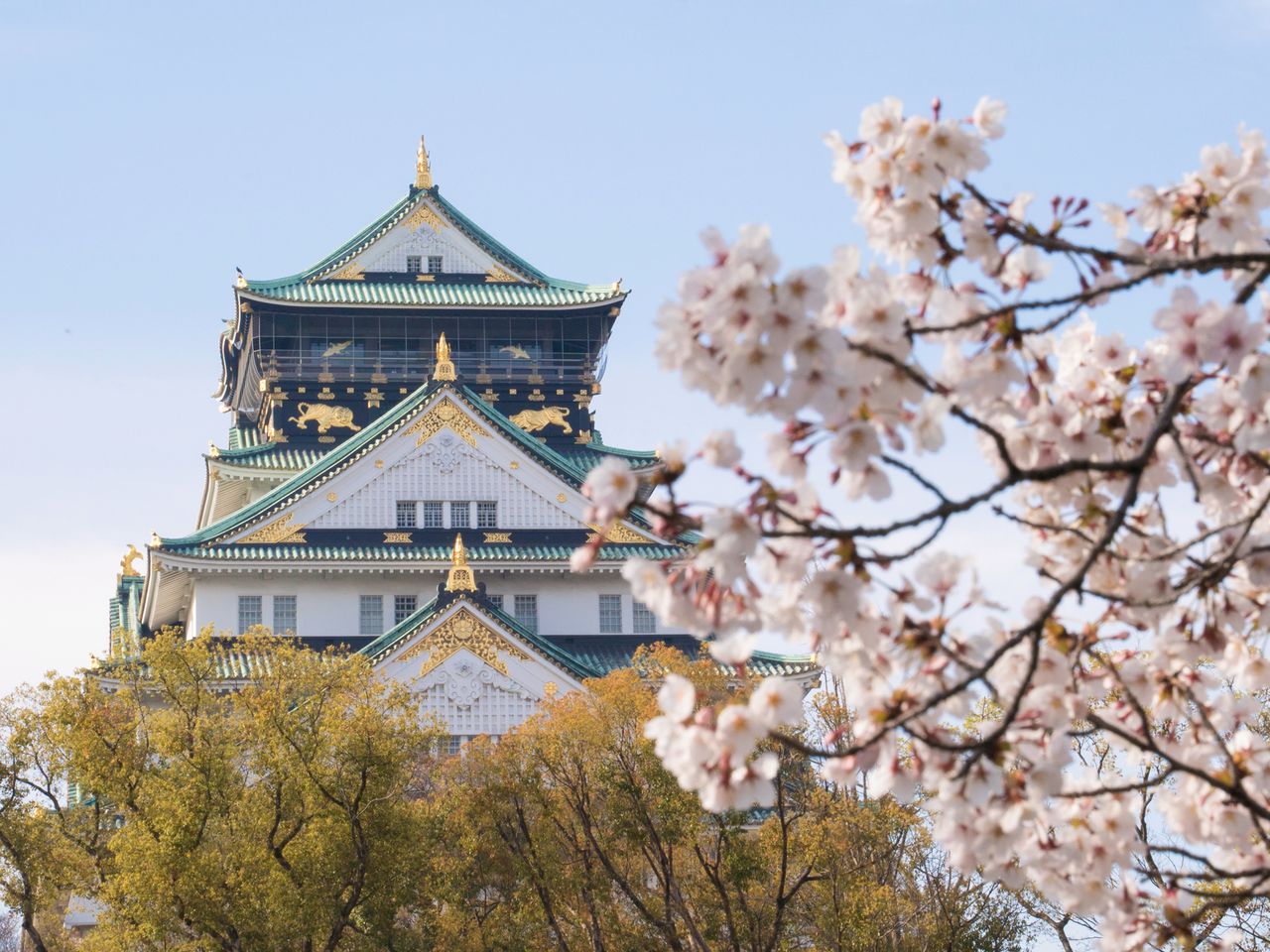 Cherry blossoms in the Nishinomaru Garden, with the castle in the background. 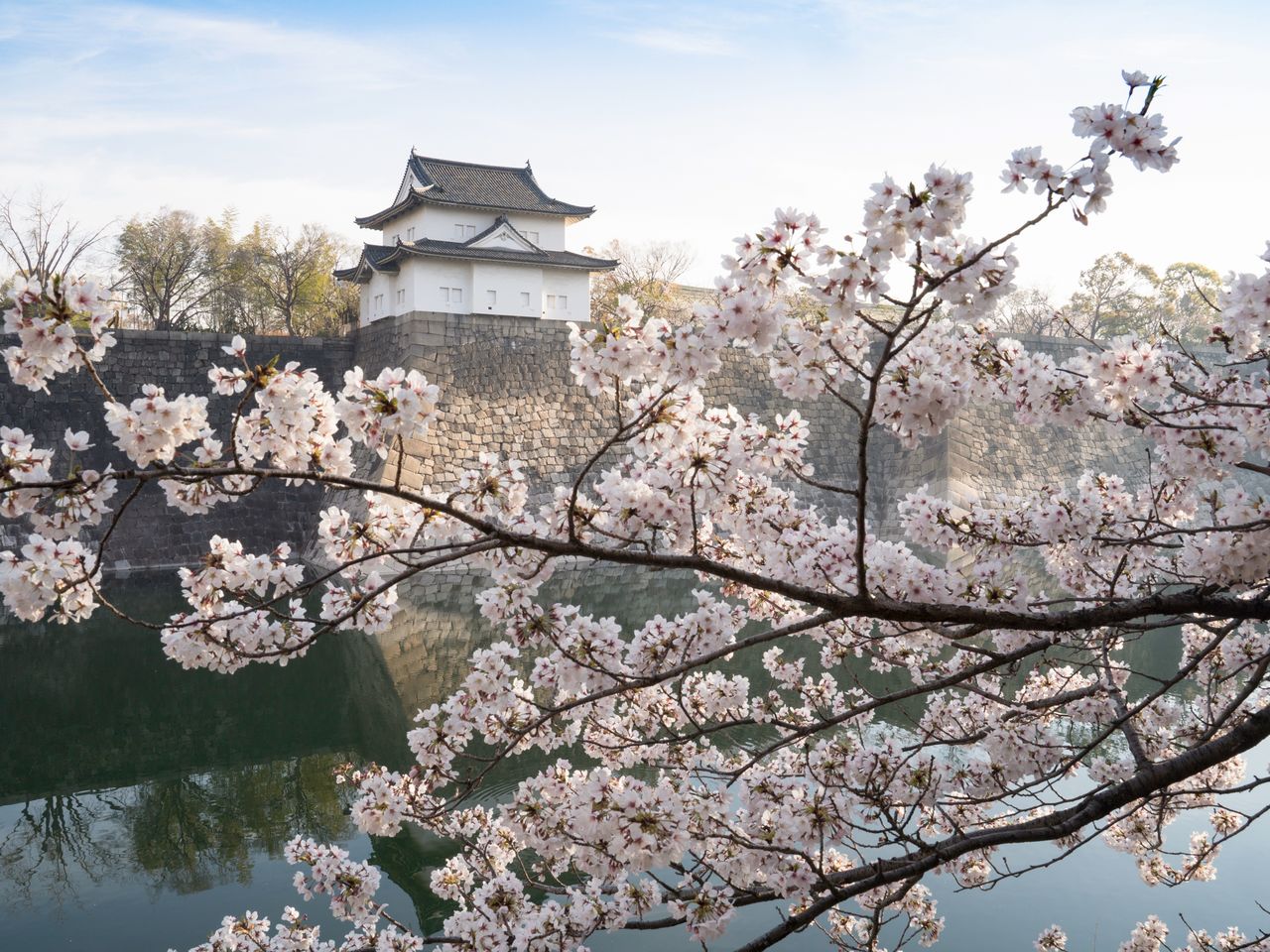 Somei yoshino cherry blossoms frame a view of the Rokuban Turret, an important cultural property, across the moat.

Several train lines and buses running nearby offer multiple options for accessing Osaka Castle Park; one of the most popular ways to the park nowadays is via Osakajō Kōen Station. Jō-Terrace Osaka, a commercial facility opened in 2017, connects with the station and offers a direct route to the park. The facility offers an extensive selection of eating places, so is ideal for having lunch or dinner after visiting Osaka Castle. There is also a rest spot with illustrations of lords, ladies, and warriors under bright red umbrellas used for outdoor tea ceremonies, where visitors can take souvenir photos. 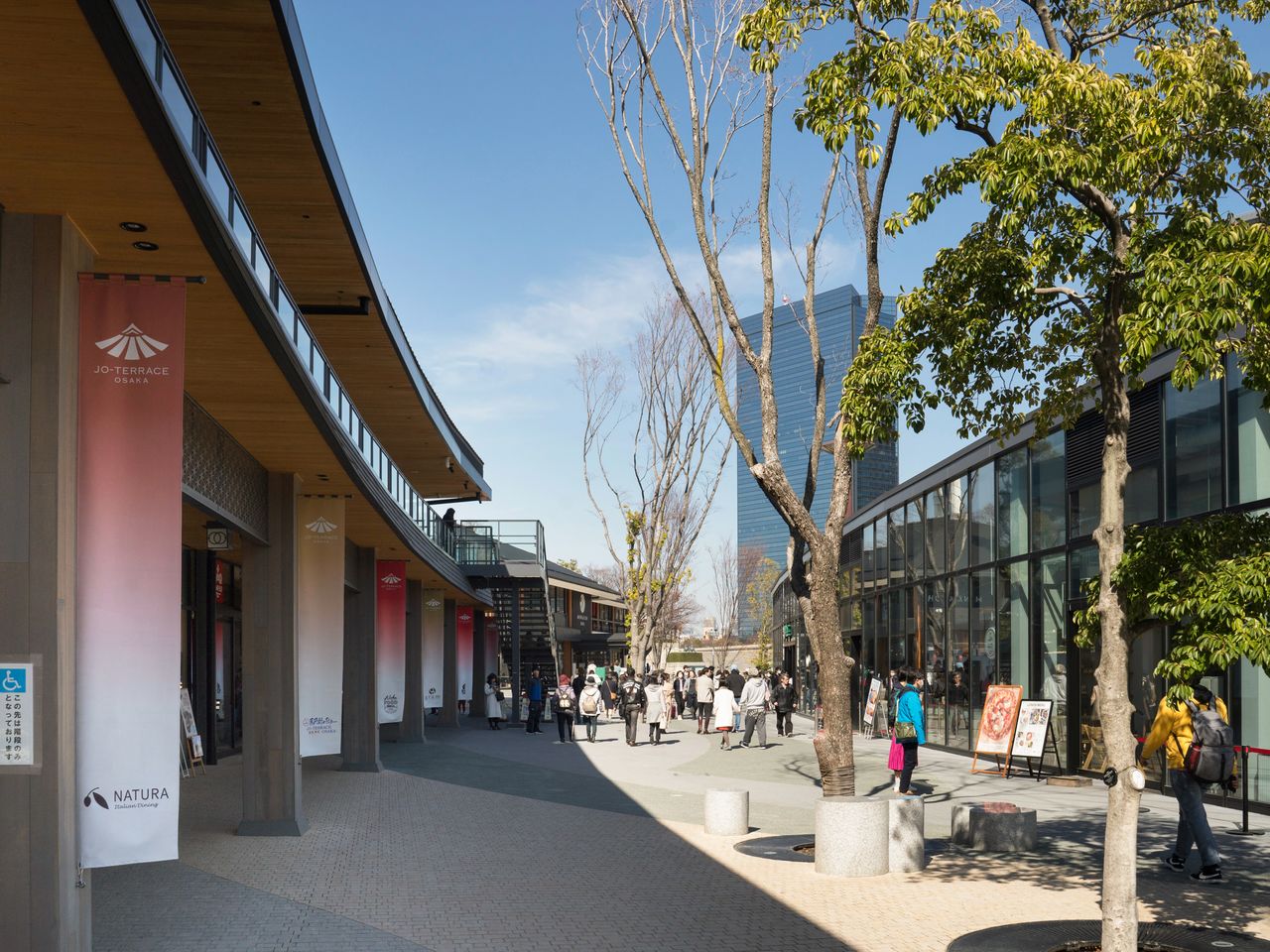 Many visitors stop at Jō-Terrace Osaka before or after visiting Osaka Castle. 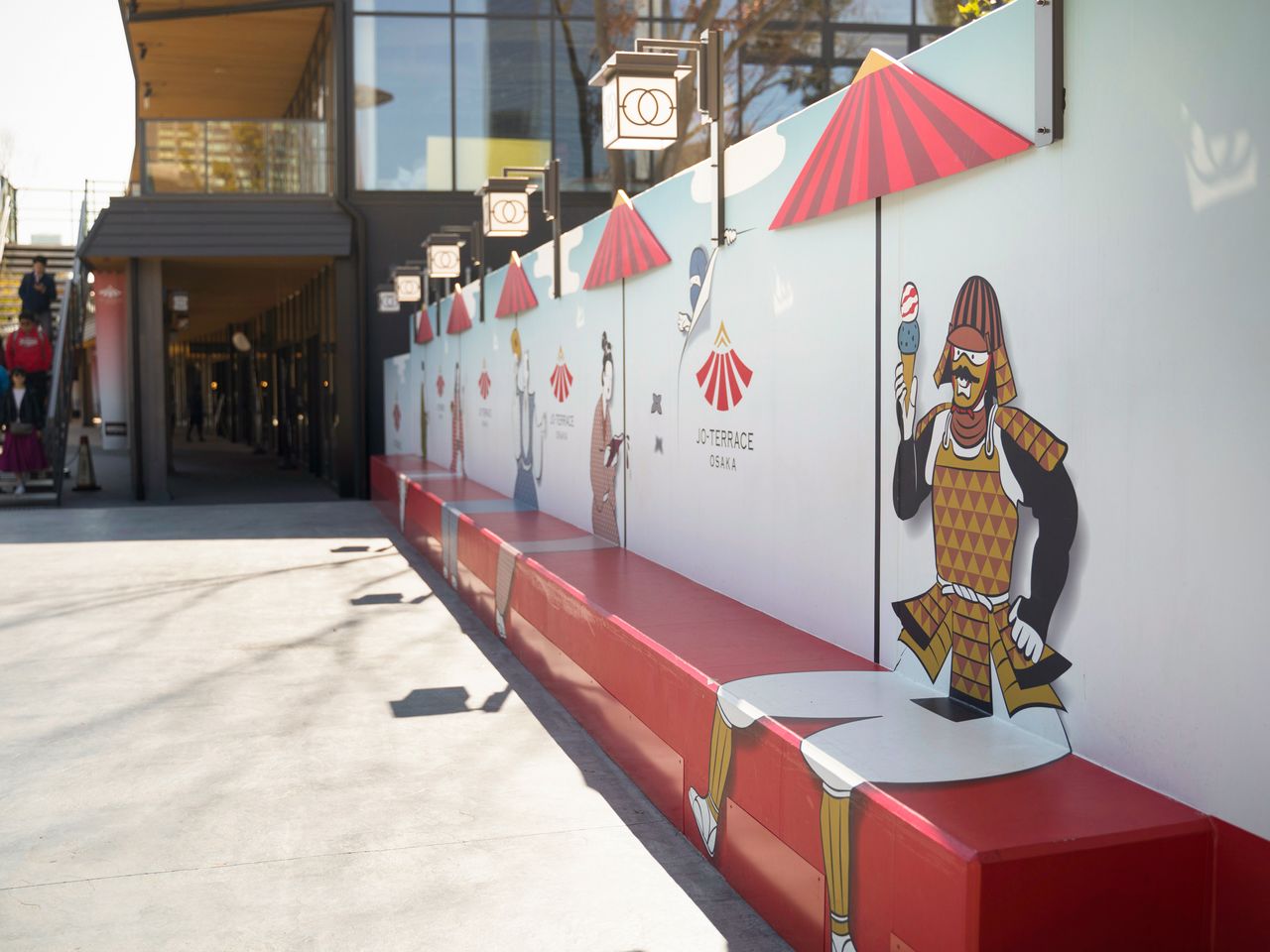 A rest spot provides a photogenic backdrop for an Instagram shot.

(Originally published in Japanese. Reporting and text by Fujii Kazuyuki; photos by Kuroiwa Masakazu and Fujii Kazuyuki, 96Box. Banner photo: Osaka Castle Park, with Osaka Castle at the center, is a favorite leisure spot for residents.)