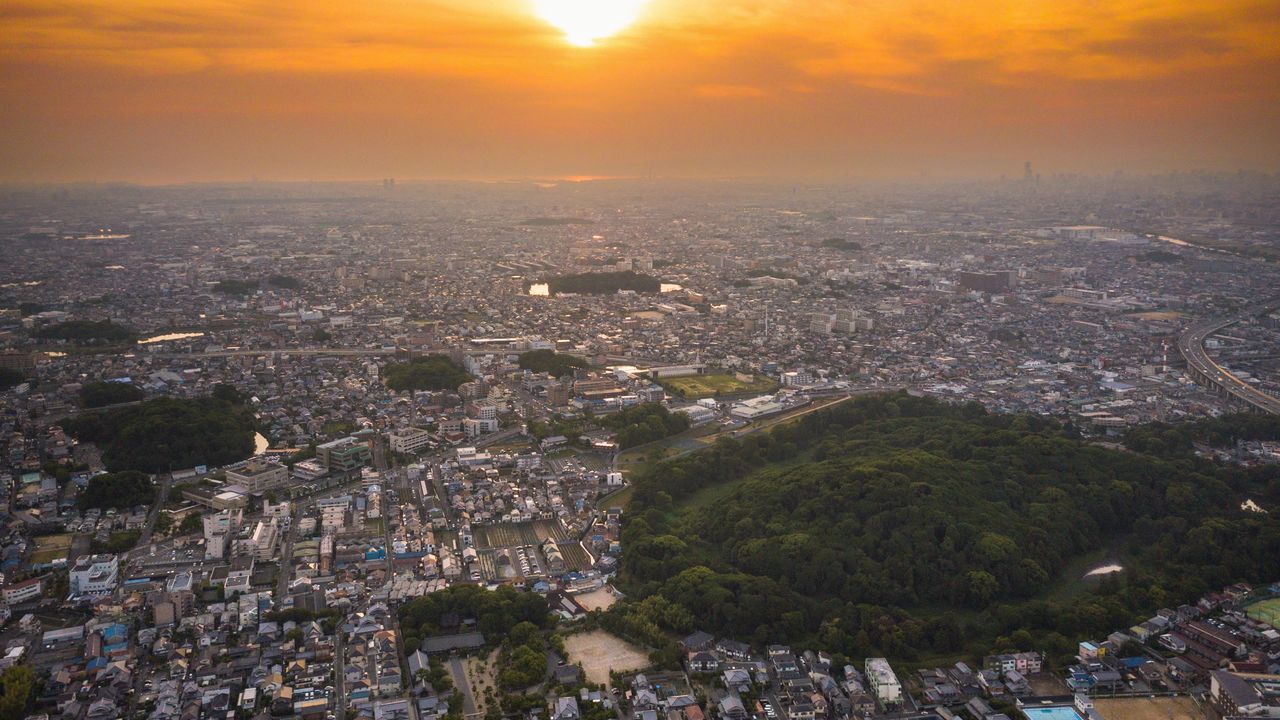 Travel Culture Aug 6, 2019
The Furuichi burial mounds, located in the southeast of Osaka, this month became the prefecture’s first site to receive UNESCO World Heritage designation as part of the Mozu-Furuichi Kofun Group, a cluster of ancient mounded tombs. We take a closer look at this fascinating site.

The Furuichi tumulus cluster comprises 45 tombs of varying sizes scattered over a 4-kilometer by 2.5-kilometer tract of land that straddles the cities of Fujiidera and Habikino. On May 14, the International Council on Monuments and Sites, a UNESCO advisory panel, recommended that the Furuichi and Mozu tumulus sites be inscribed on the World Heritage List. In July 2019 the recommendation was approved by the UNESCO World Heritage Committee at its meeting in Azerbaijan, making these ancient tombs Osaka’s first World Heritage site. 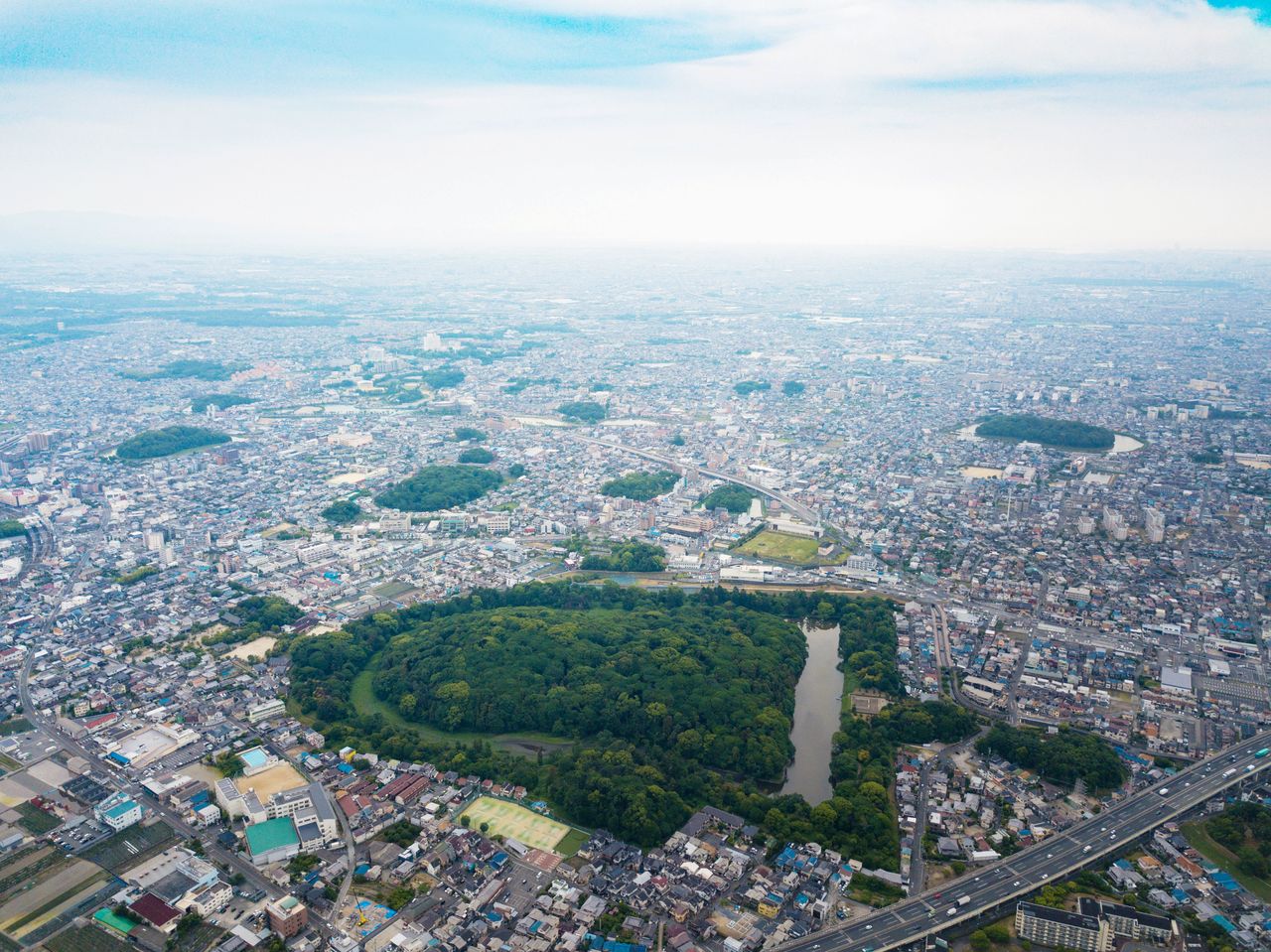 This aerial photo shows the highly built up area surrounding the Furuichi tumulus cluster. The tomb of of Emperor Ōjin can be seen at the bottom center of the frame.

The Daisen Kofun, the burial mound of Emperor Nintoku, is by far the best-known in the Mozu-Furuichi group. The mound is 500 meters in length and surrounded by a triple moat. A majestic sight, it is also the largest tumulus in Japan to have the distinctive keyhole shape.

By contrast, the burial mound of Emperor Ōjin, Japan’s second-largest at 425 meters in length, is relatively unknown, even among the Japanese. The mound is located in the Furuichi cluster, which boasts 45 tombs, one more than the Mozu cluster. It is also home to 26 of the 49 sites being claimed as World Heritage, making it easily the equal of the Mozu cluster in terms of its scale and archaeological value. As is the case with the Mozu cluster, the gigantic burial mounds of the Furuichi cluster are completely surrounded by office buildings and houses—a sight seen in few places on earth. 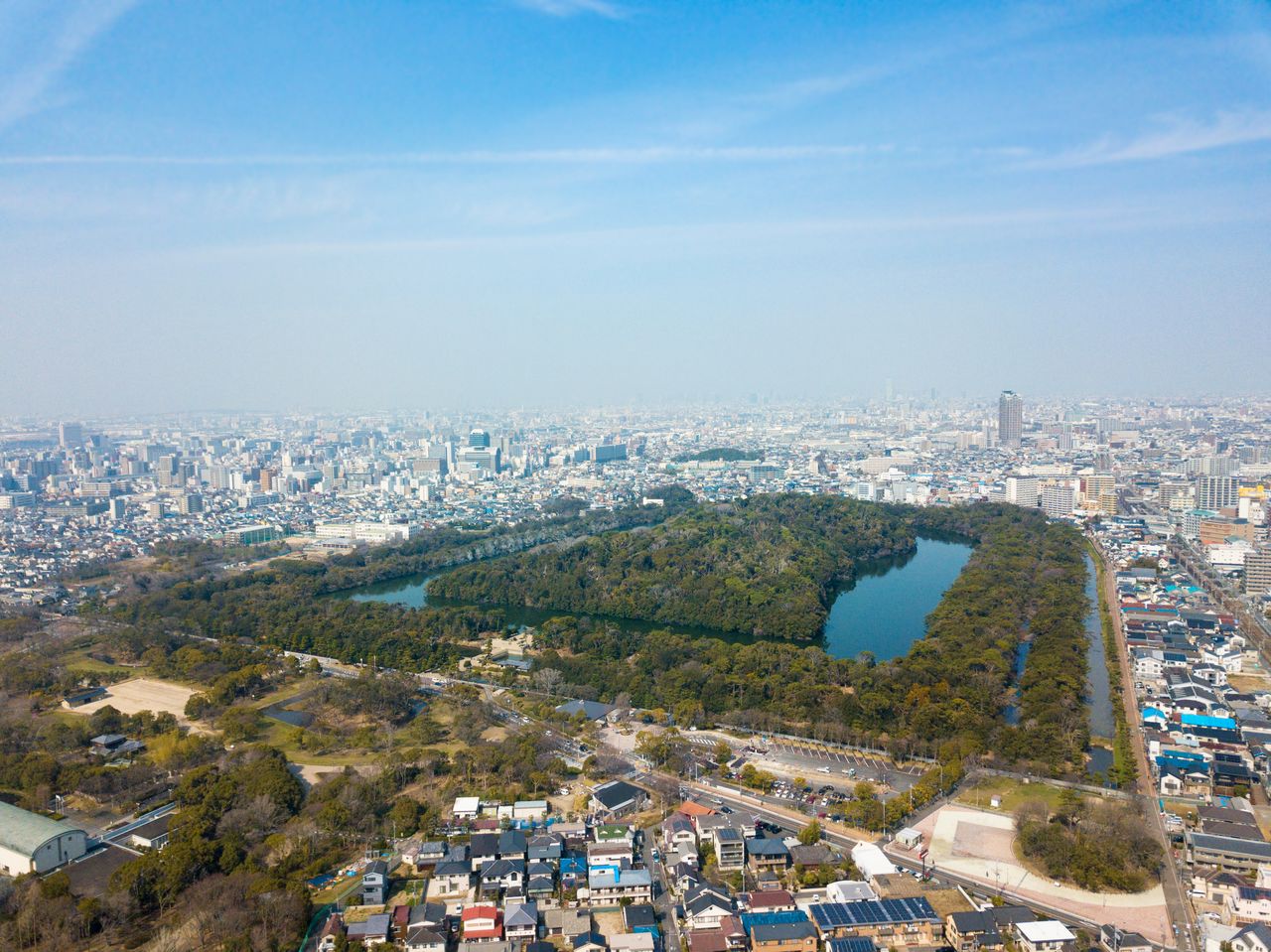 The burial mound of Emperor Nintoku.

Visitors to the site should check out the lists of walks published by the Conference Headquarters for the Promotion of Mozu-Furuichi Kofungun for World Cultural Heritage Inscription. The pamphlets are available at local railway stations and visitor centers, as well as on the official website.

The pamphlet for the Furuichi tumulus cluster details three walks: a long 3-hour, 7.4-kilometer route, a quicker 1.5-hour, 4.4-kilometer walk, and a “shutterbug course” also 4.4 kilometers long, offering 1.5 hours of particularly scenic views. The shorter two walks both depart from Hajinosato Station on the Kintetsu Minami Osaka line. Leading visitors past a series of burial mounds of varying sizes and culminating with the tomb of Emperor Ōjin, the largest of them all, the walks take visitors past a varied and fascinating selection of burial mounds. 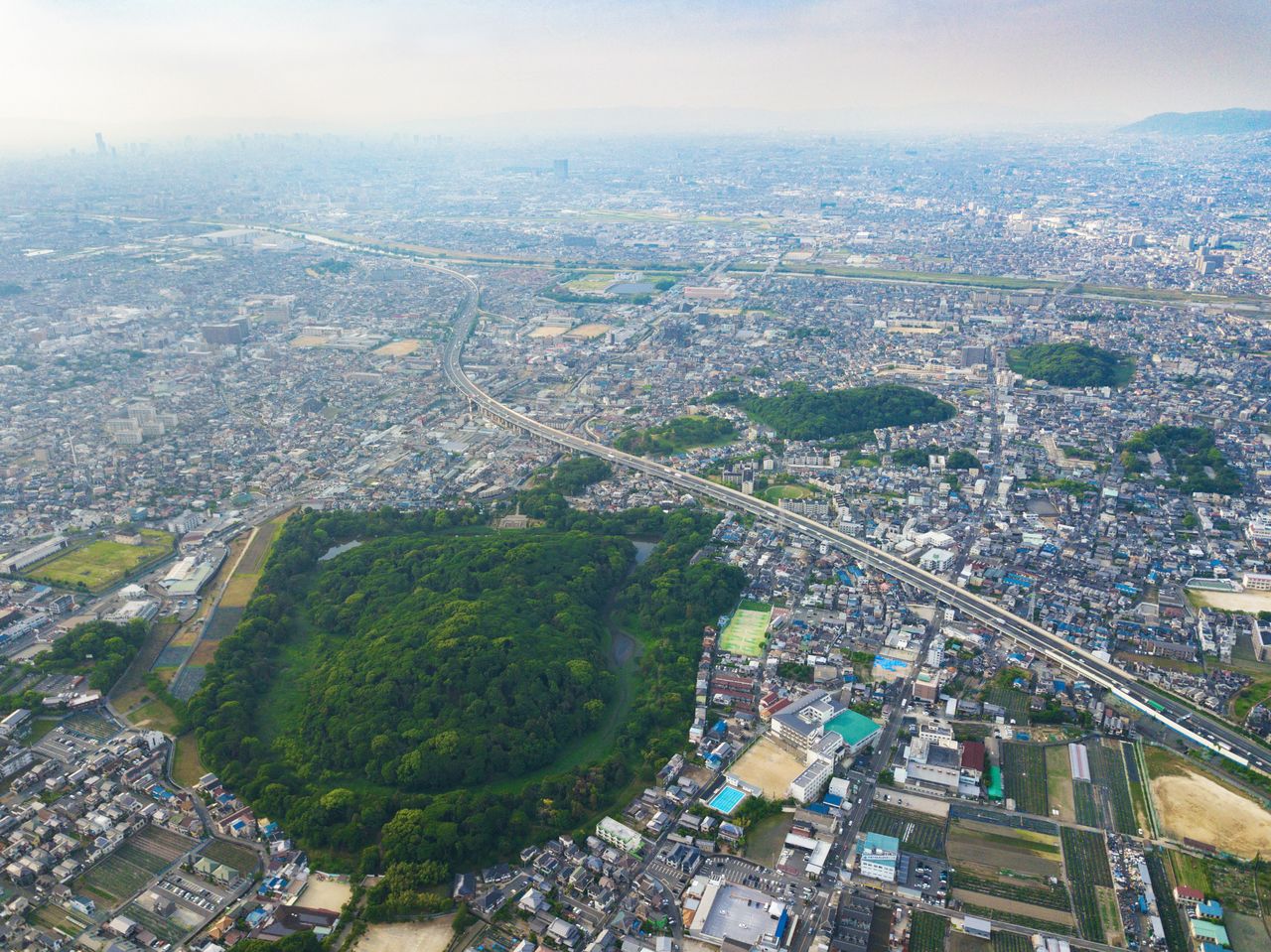 The burial mounds form a “tail” that stretches from the tomb of Emperor Ōjin, in the foreground, to the upper right of the photo.

After arriving at Hajinosato Station, visitors should head north to the tomb of Emperor Ingyō. The fourth largest keyhole-shaped tumulus in the Furuichi cluster, this keyhole shaped tomb is around five minutes’ walk from the station. The north side of the site gives a good view of the top of the keyhole. In December, the reeds in the moat turn brown, creating a striking contrast with the green of the tumulus. 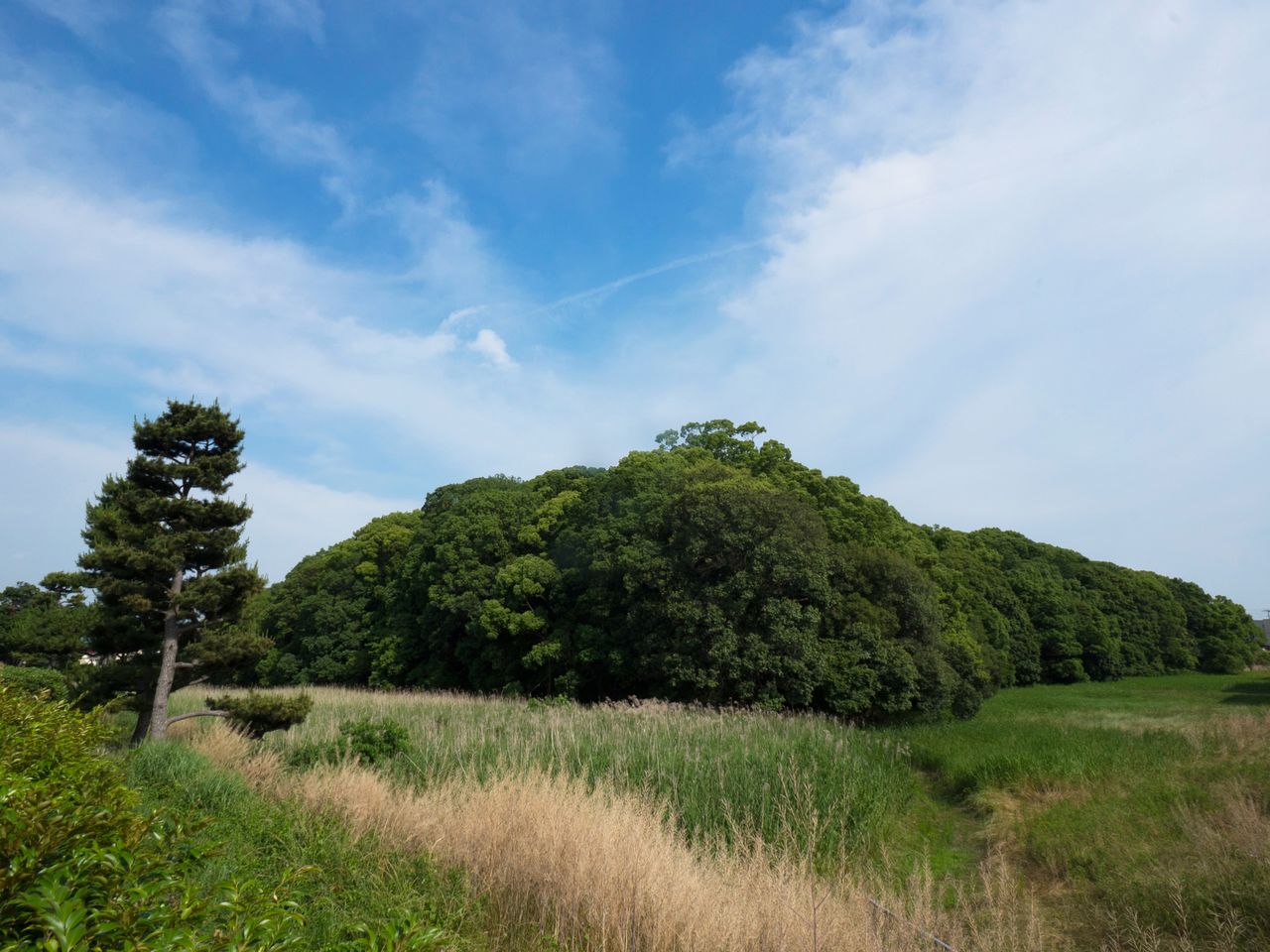 The Ingyō tumulus from the northwest. 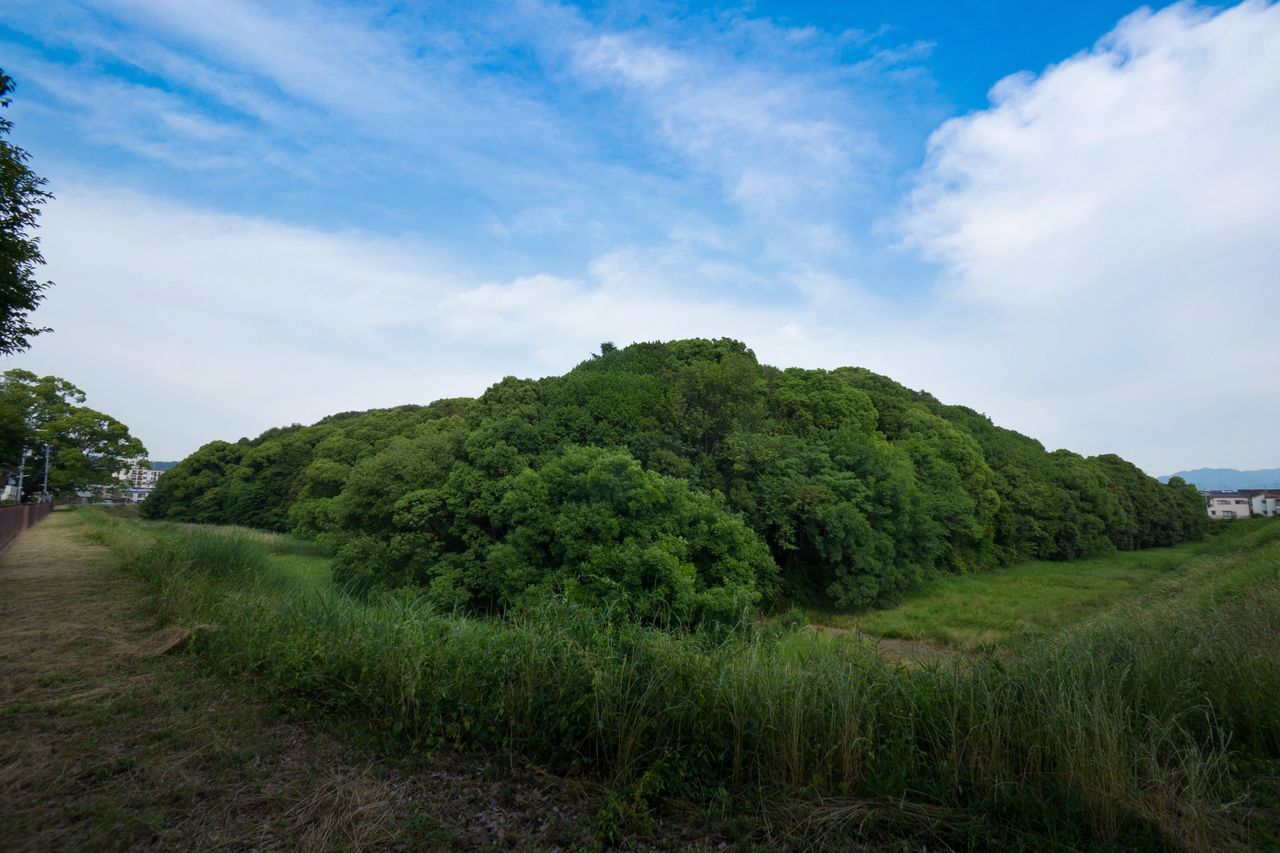 The Nakatsuhime-no-Mikoto burial mound is surrounded by a narrow moat. 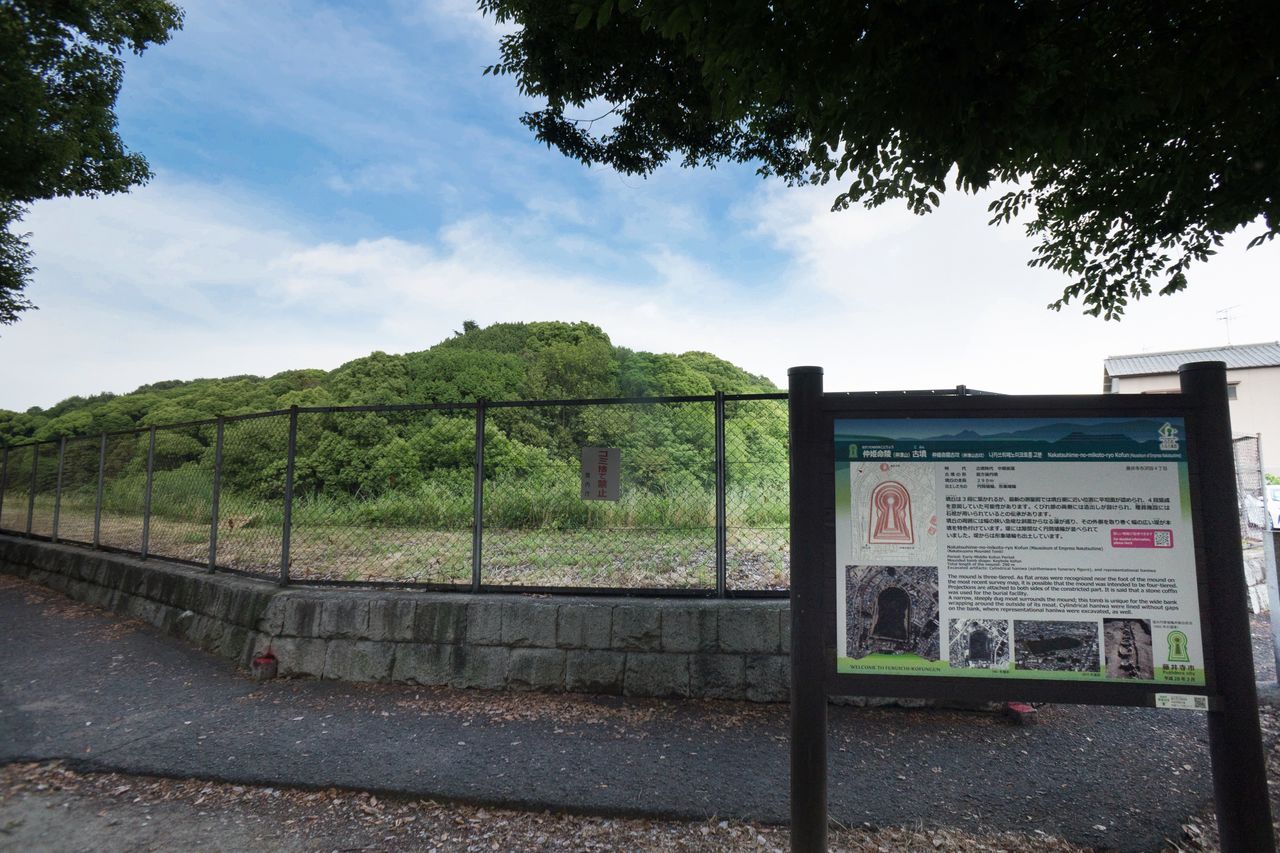 An information board to the southwest of the Nakatsuhime-no-Mikoto burial mound containing information on the size of the tomb and the history and folklore of the site. 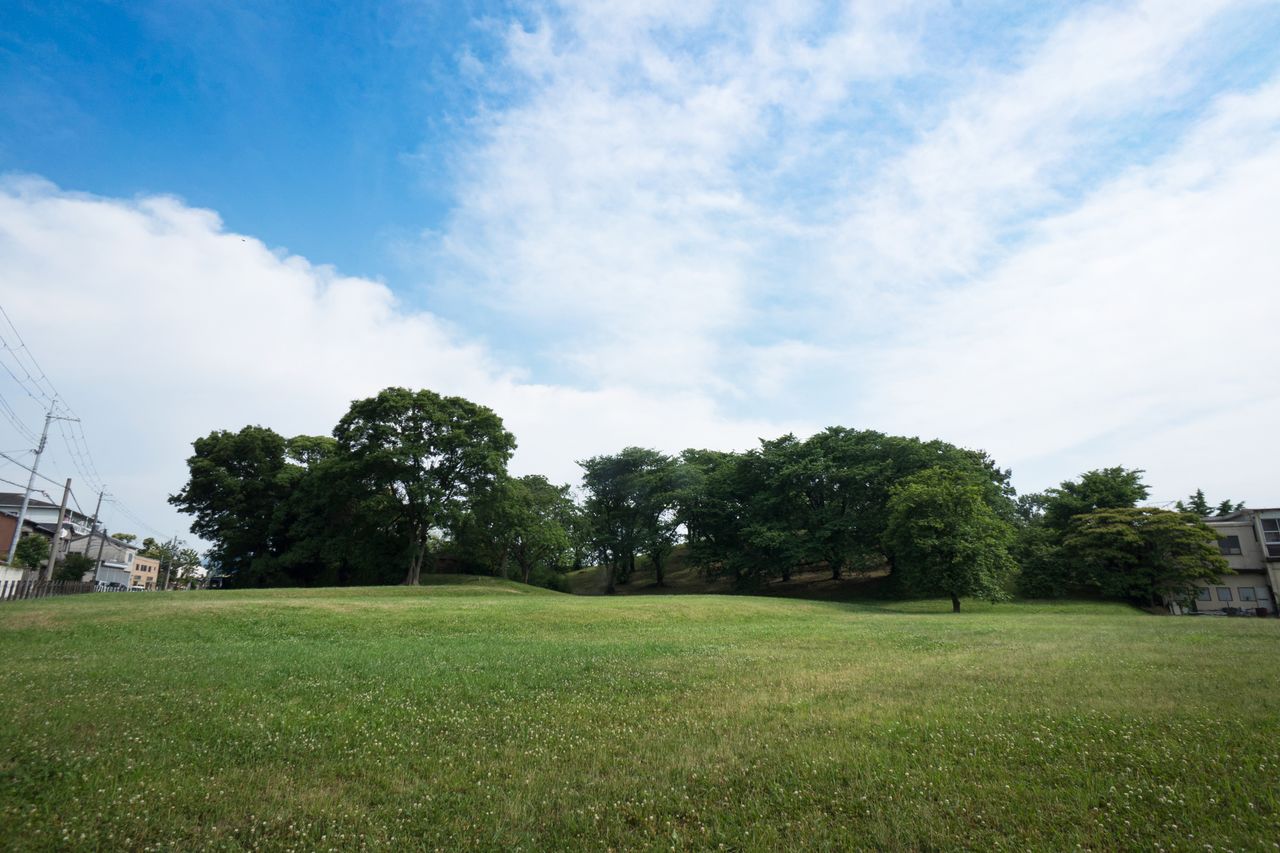 The Komuroyama tumulus is one of the few that can be climbed. Now a park, it is popular with local residents.

You then pass under the Nishimeihan Expressway and walk south to arrive at the 110-meter-long Ōtorizuka tomb. To the south is the forest-covered burial mound of Emperor Ōjin, which stretches breathtakingly into the distance beyond the prayer place on its north face. Surrounded by a moat and a ring of forest, the mound is so large that its scale cannot be fully appreciated on the ground. All the same, visitors will feel its mysterious power. 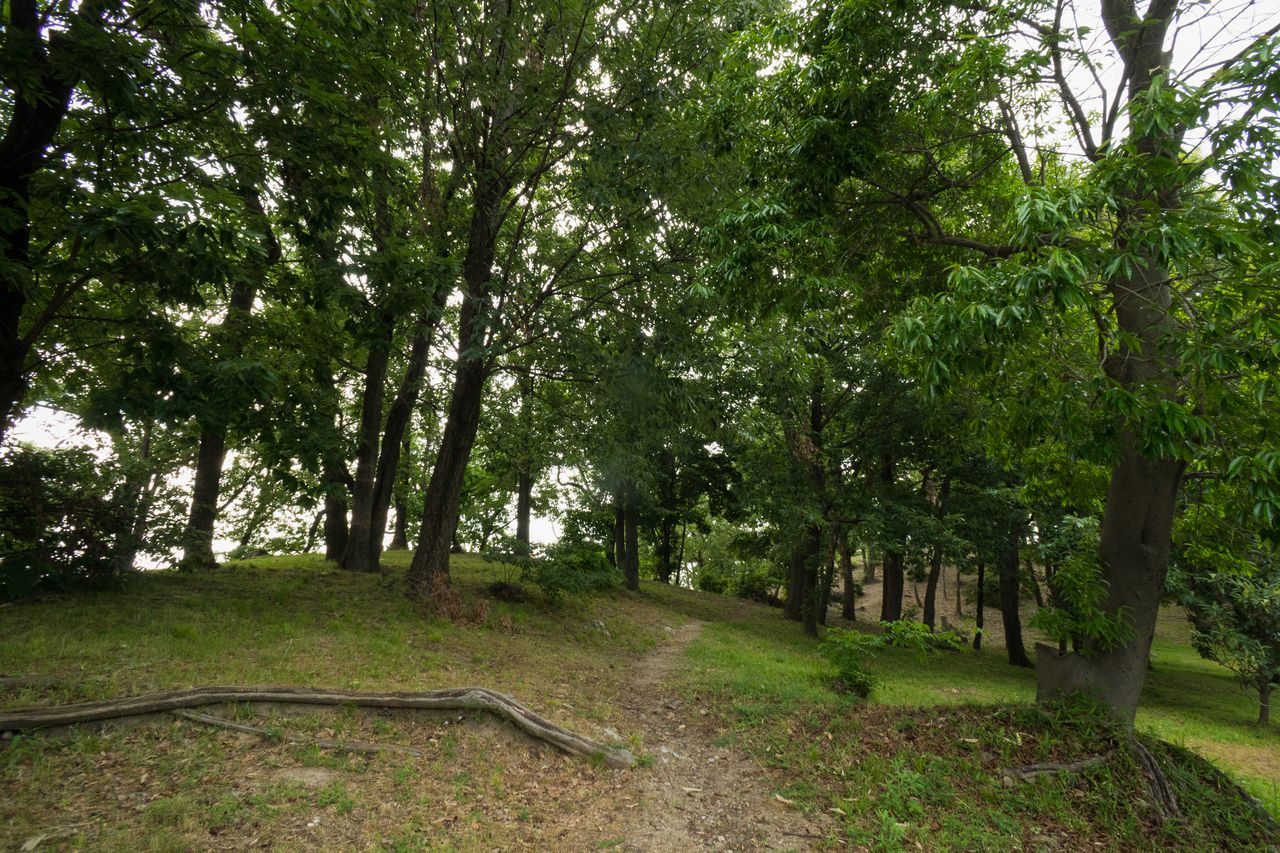 The Ōtorizuka burial mound is open to the public. 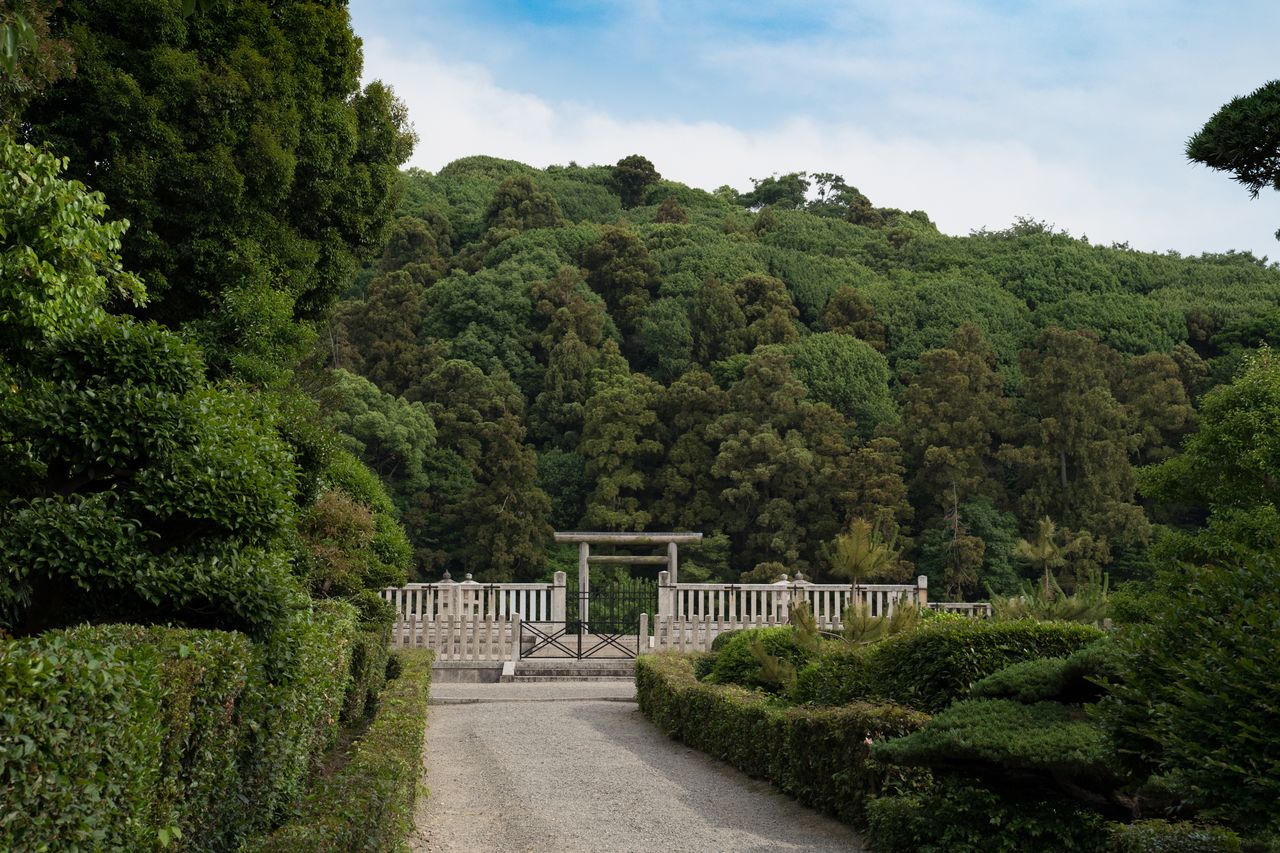 The place of worship on the south face of the burial mound of Emperor Ōjin. 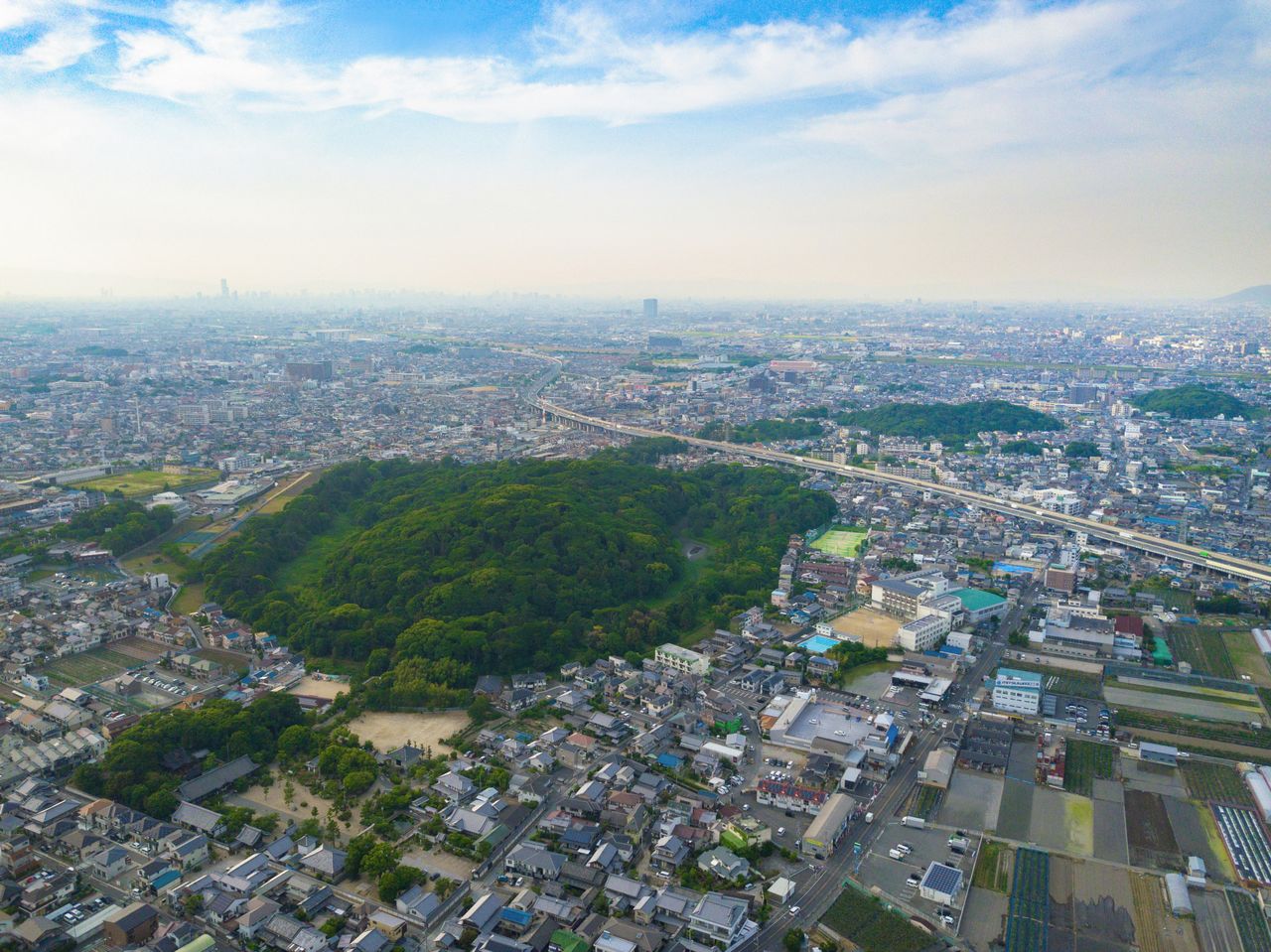 An aerial view of the burial mound of Emperor Ōjin from the south.

You next walk 30 minutes west to arrive at the burial mound of the Chūai Emperor, which, at 230 meters in length, is the third largest in the Furuichi cluster. The mound is surrounded by a wide moat and was the site of a castle in the Muromachi period (1333–1568). 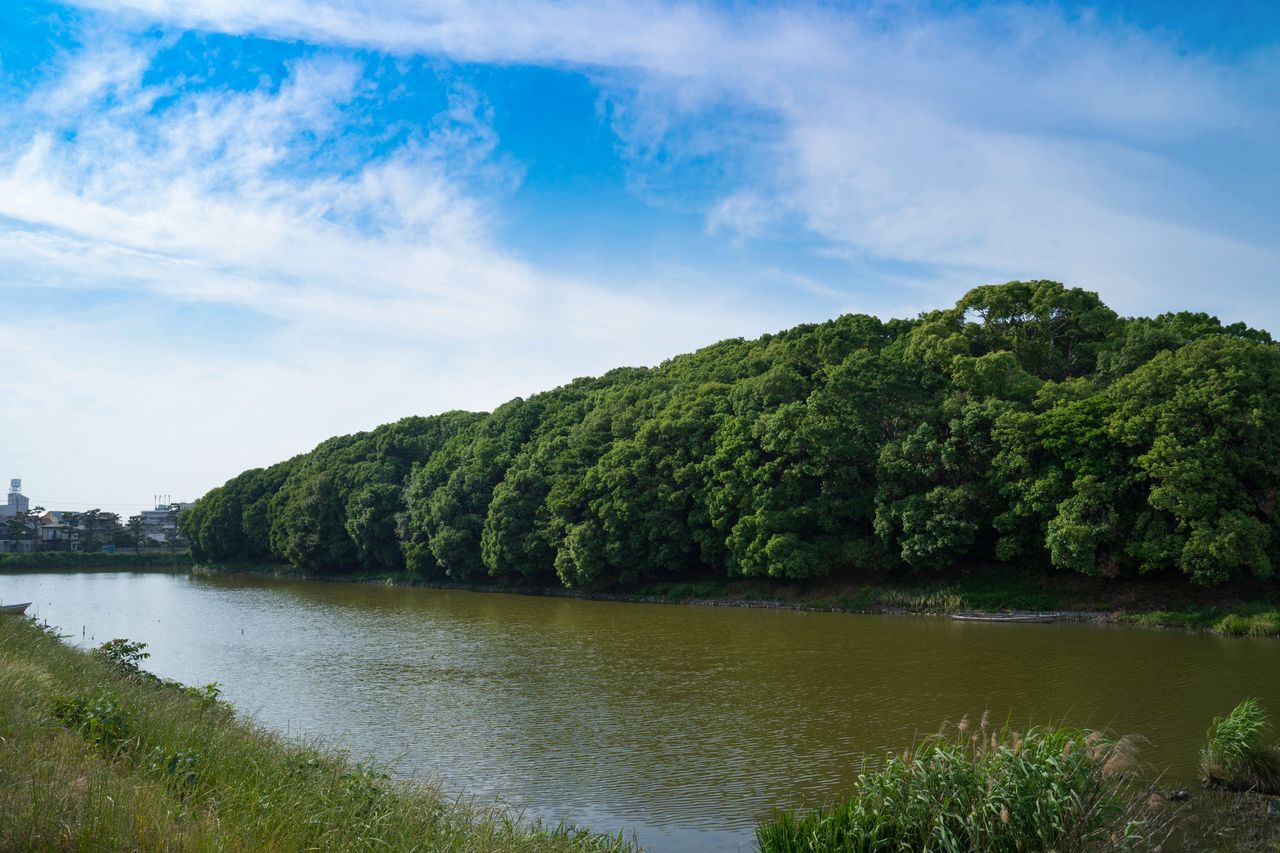 The burial mound of the Chūai Emperor is comprised of three strata.

While not included on the World Heritage list, the tomb of the Ninken Emperor (Hanyū no Sakamoto no Misasagi) is also a 20-minute stroll away. This tomb is best viewed from the other side of neighboring Shimoda Pond. From here, walk 300 meters south and you will arrive at the Minegazuka tomb. The tomb is situated in the middle of Minezuka Park, a favorite spot for cherry blossom viewing. 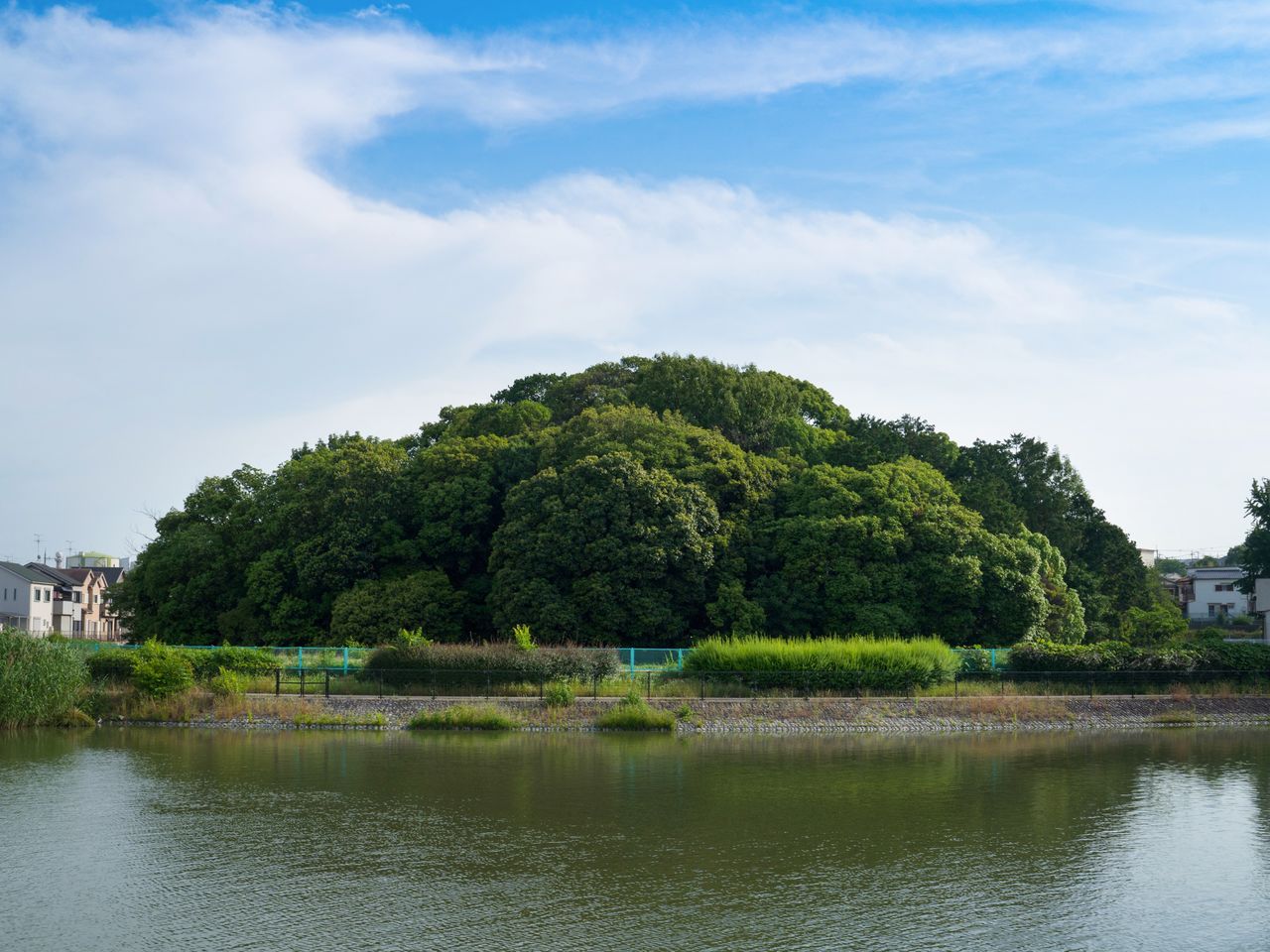 The tomb of the Ninken Emperor as seen from the other side of Shimoda Pond. 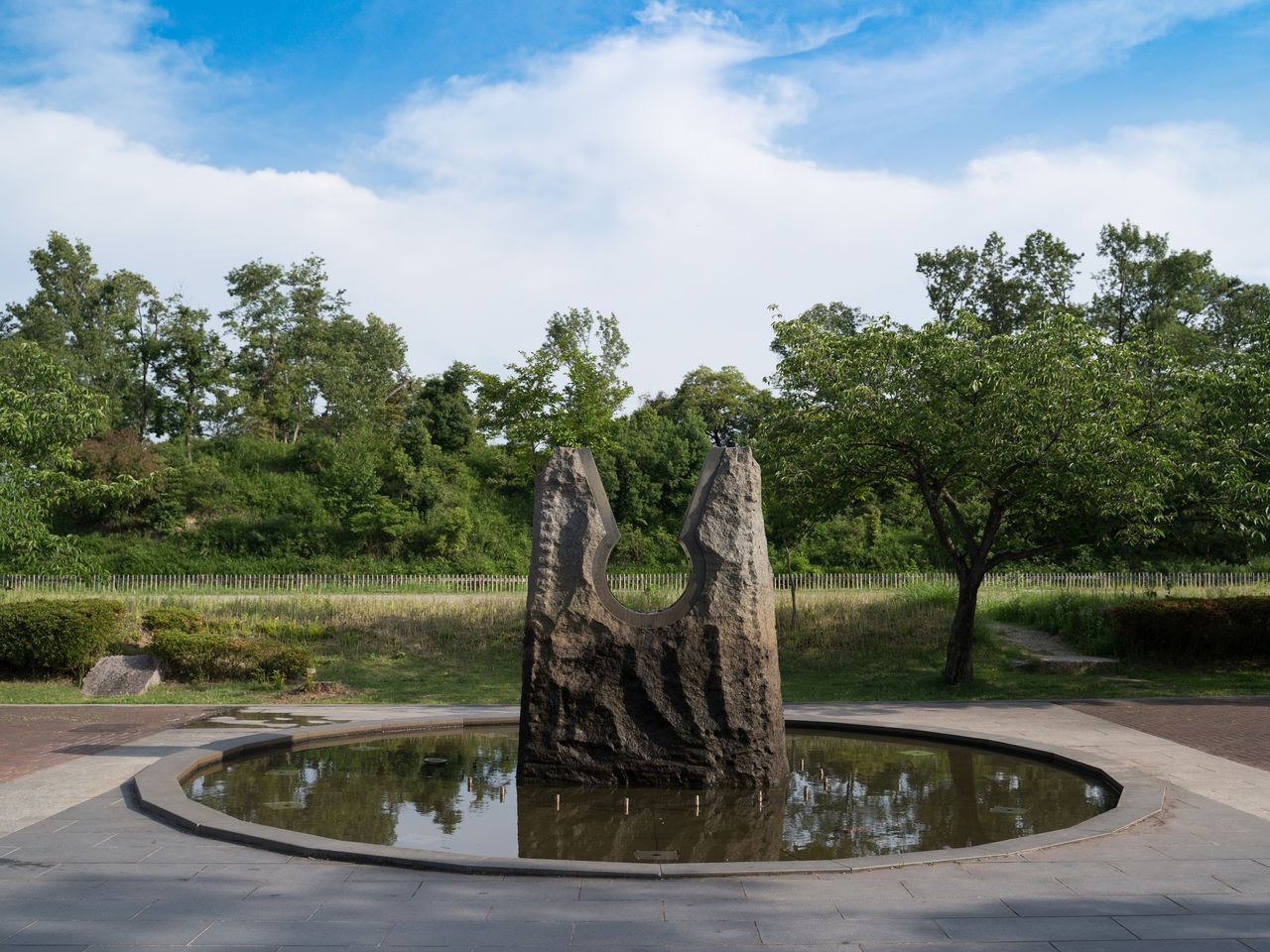 The fountain in Minezuka park with the Minegazuka tomb in the background.

To the east of the Minegazuka tumulus you will see the 200-meter keyhole-shaped Shiratori no Misasagi, which according to legend is the last place the soul of Yamato Takeru landed after turning into a giant white bird. Seven minutes’ walk to the East is Furuichi station on the Kintetsu Minami Osaka line. 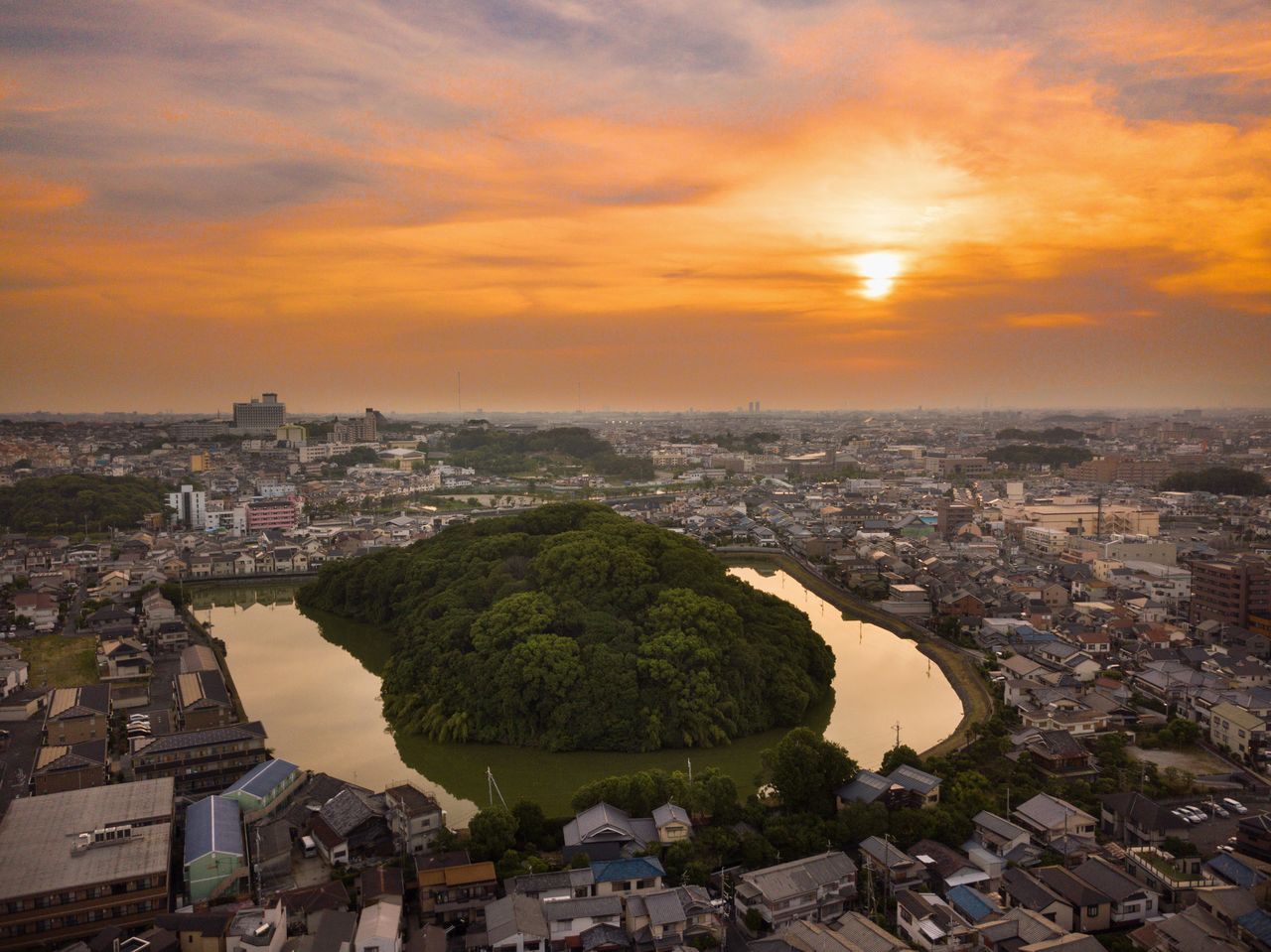 Shiratori Tumulus by dusk, with its moat taking on the hue of the evening sky.

Bicycles can be hired at Hajinosato and Furuichi stations and the Daisen Park visitor center from Mozufuru Rental Bicycles. Cycling is an efficient way to tour the Mozu and Furuichi clusters, with the electric bikes making light work of the 10 kilometers between clusters. As the Daisen park visitor center closes first, you are advised to rent your bike in Mozu and return in Furuichi to maximize sightseeing time. Cycles can be rented for ¥1,000 per day—or half price if returned to the same location where they were picked up. 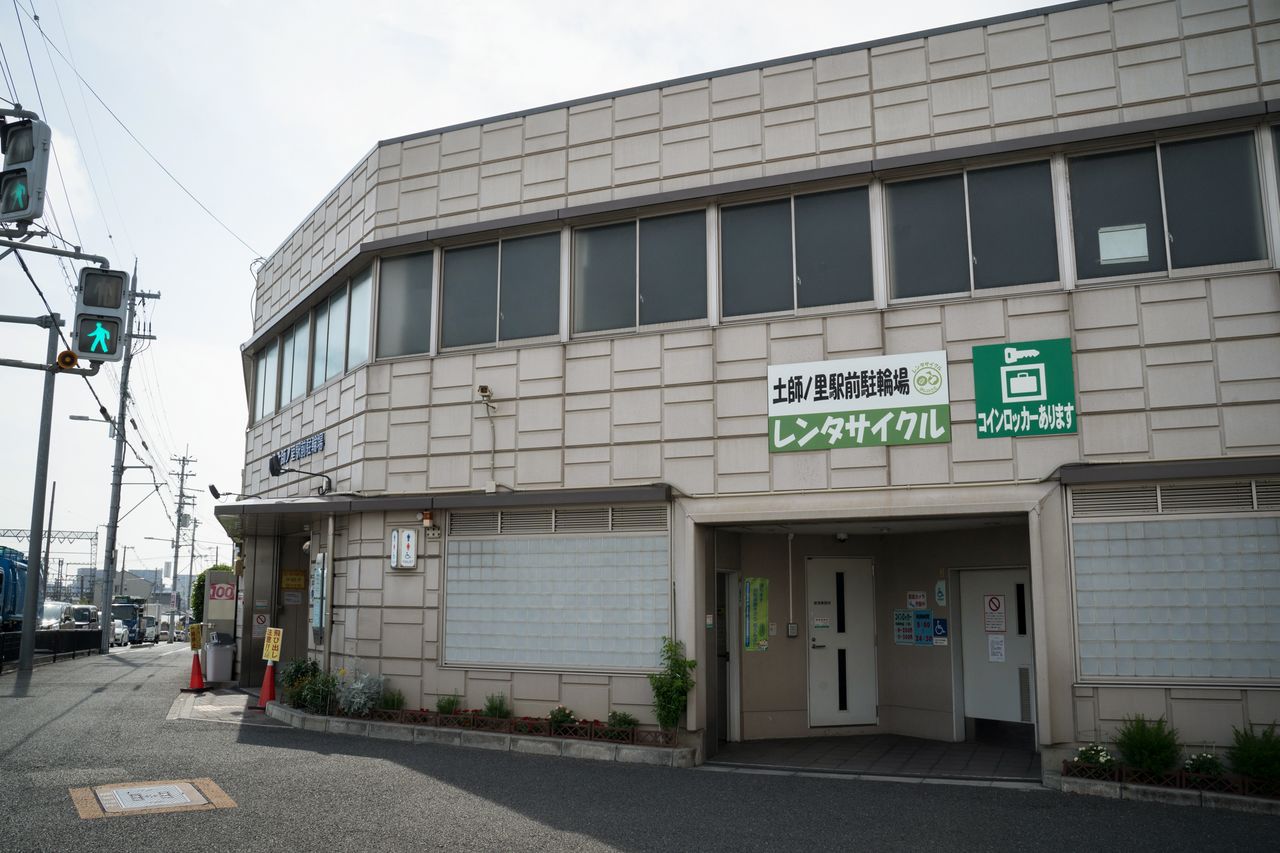 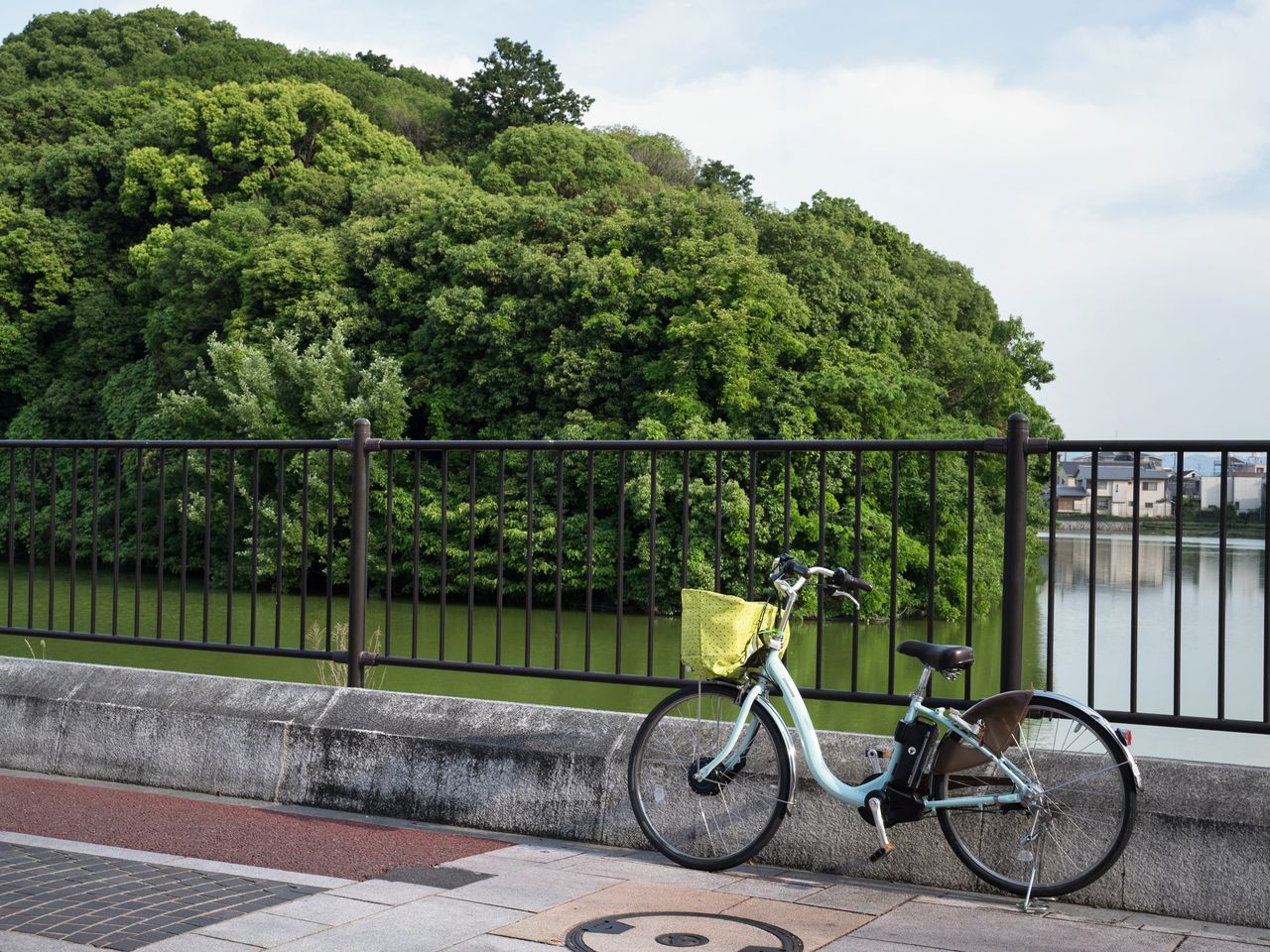