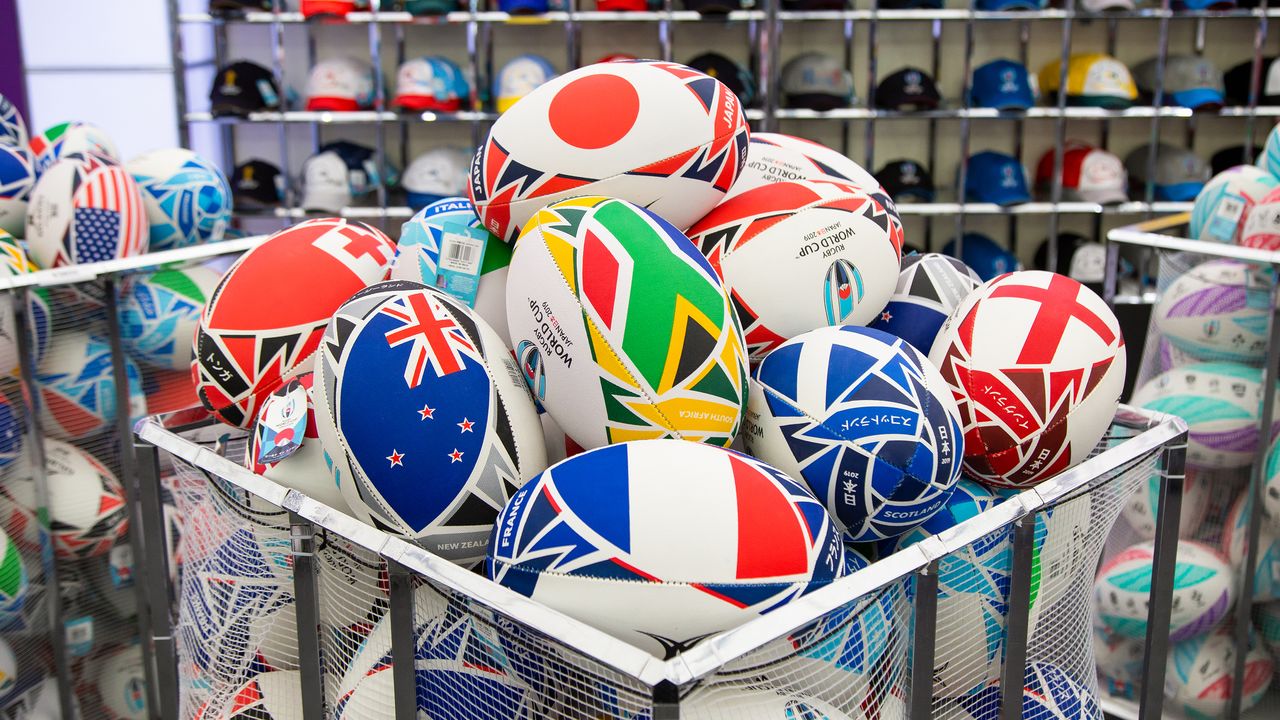 Sports Travel Oct 4, 2019
Even without match tickets, rugby fans can enjoy the energy of the Rugby World Cup at viewing venues called Fanzones located across Japan or by visiting the competition’s official store in Tokyo.

The Rugby World Cup in Japan is in full swing. People wanting to enjoy the spectacle but do not have tickets can visit one of 16 special venues called Fanzones in the 12 host cities. Open to the public, the sites are located in large parks or event halls. Along with watching matches live on giant screens, visitors can sample foods from the competing nations along with local fare, enjoy entertainment such as stage appearances by players and celebrities, and try their hand at the game. 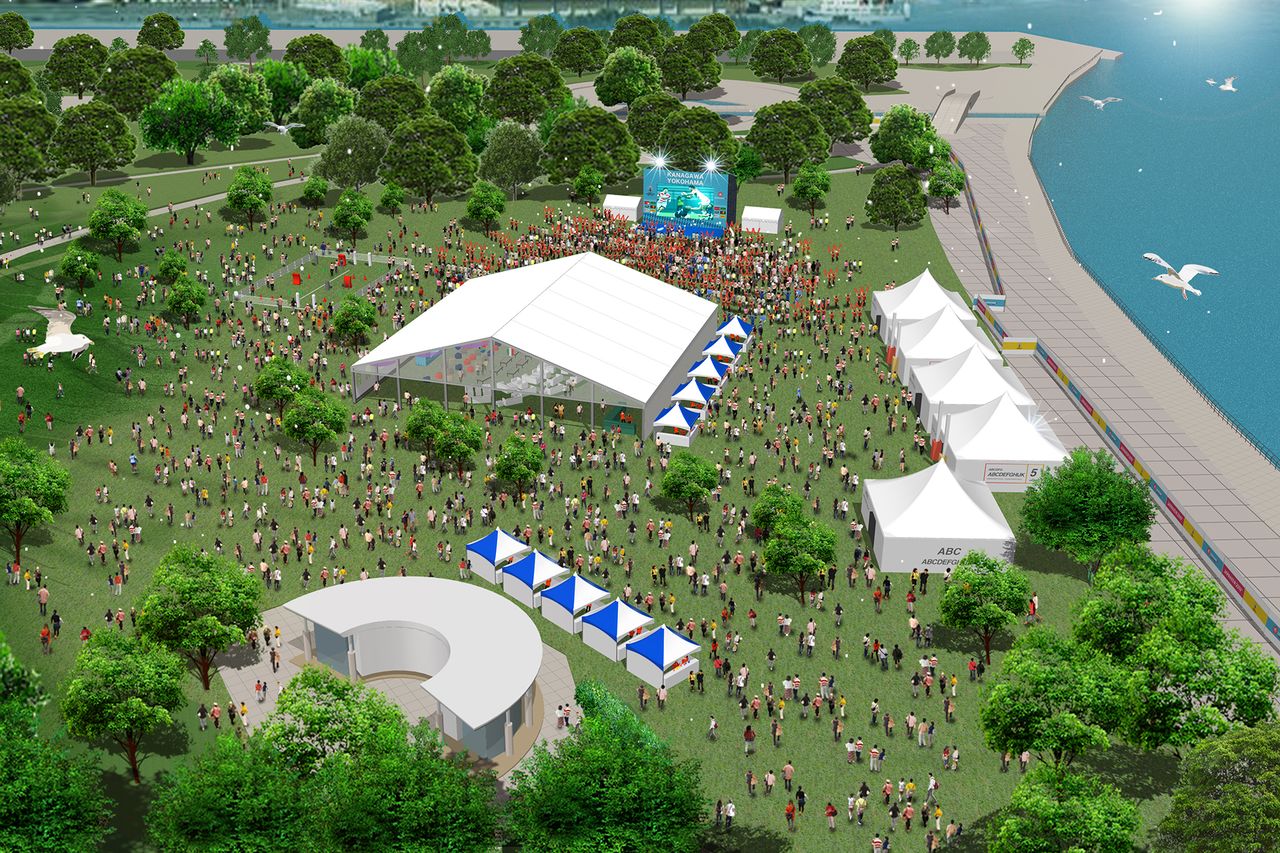 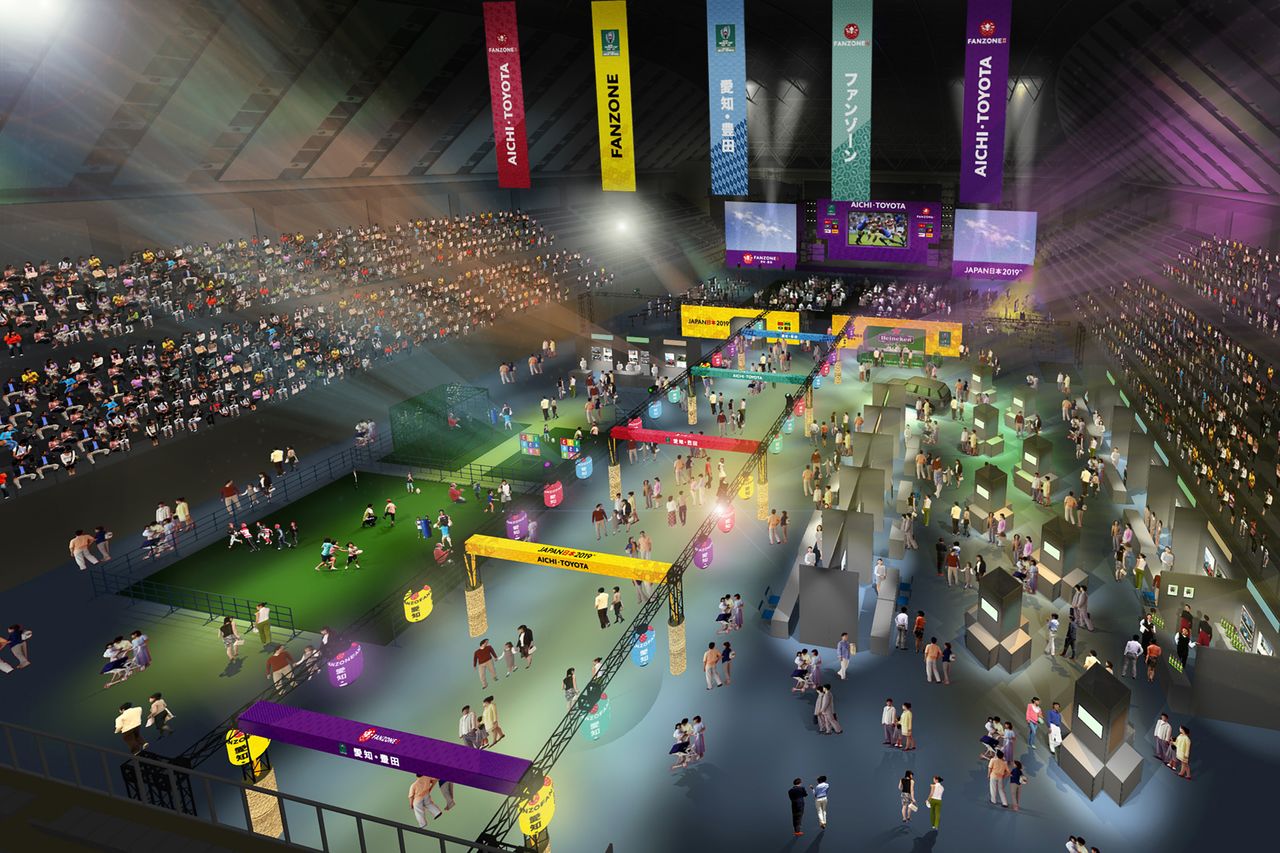 Fanzones were first rolled out for the 2011 World Cup in New Zealand and have become an established feature of the event. The public match screenings are big draws, providing a chance for locals and visiting fans to interact. For host cities, it is an opportunity to promote tourist landmarks and local products. Embassies and overseas sponsors are also represented. Schedules and facilities for the venues can be found on the Japan Rugby 2019 official website. 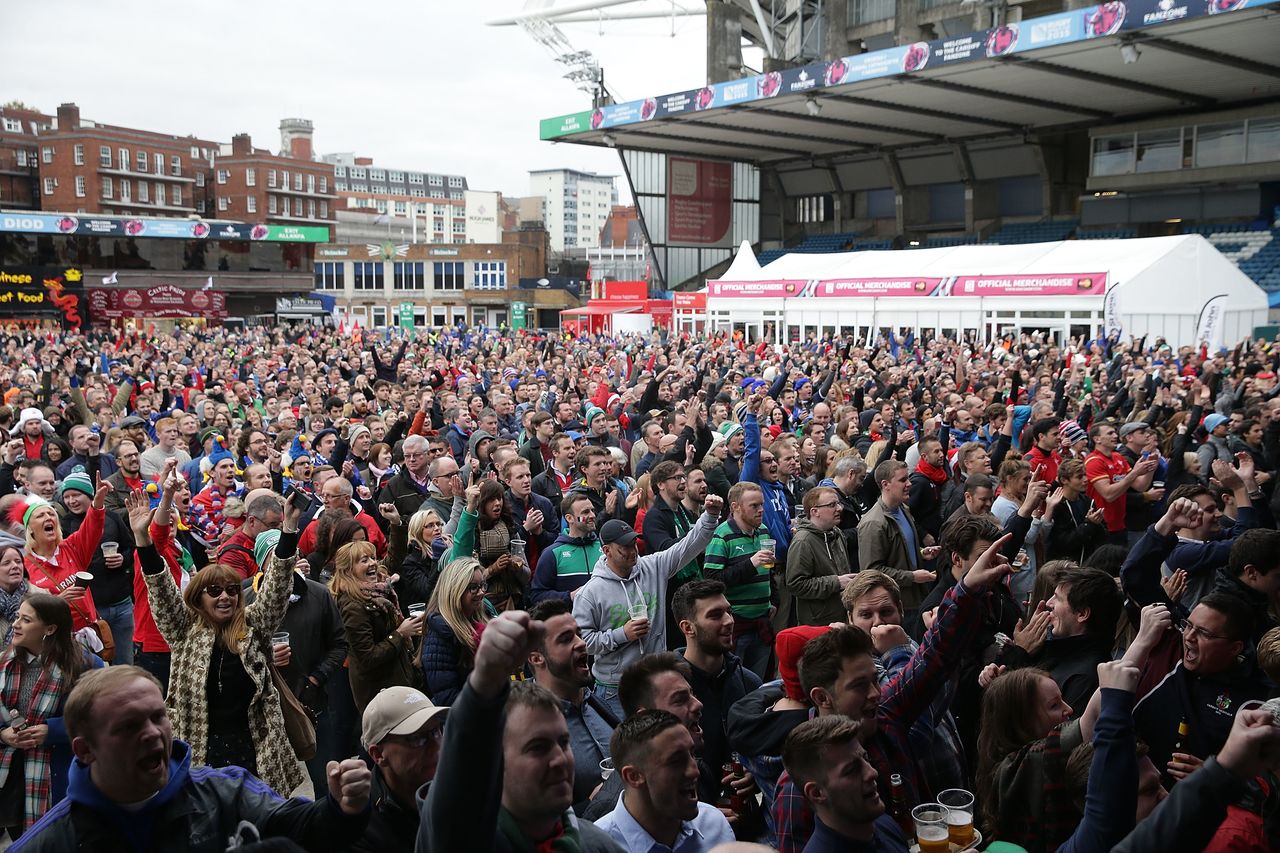 A Fanzone at the 2015 World cup in England. The 15 venues at the tournament welcomed around 1 million attendees. (Courtesy Rugby World Cup 2019 Organizing Committee) 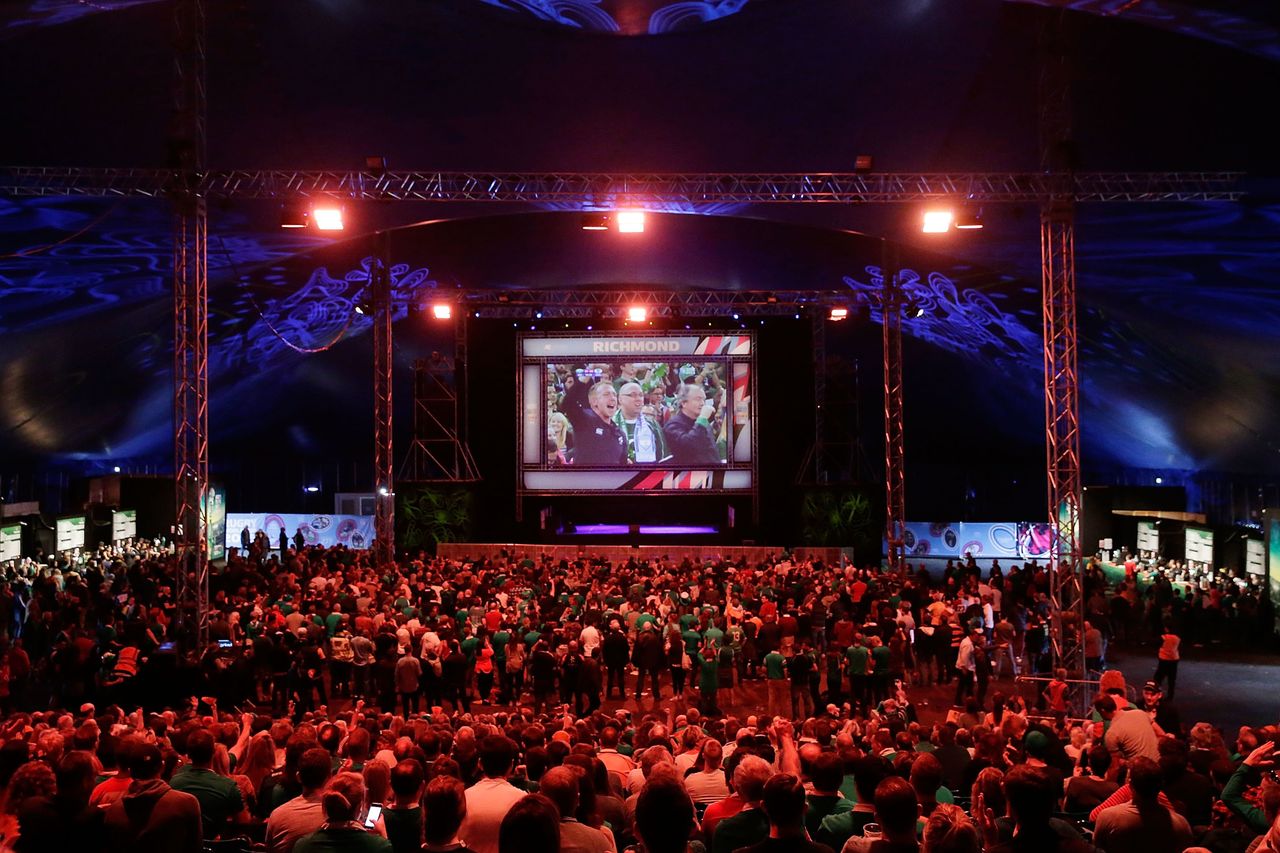 Spectators watch a light show at a Fanzone during the 2105 World Cup in England. (Courtesy Rugby World Cup 2019 Organizing Committee)

* Fanzone dates for September, including the Sapporo venues and Hanazono Chūō Park in Osaka, are not included.

Fans looking to get into the spirit of the tournament have a wide range of official merchandise to choose from, including team jerseys and scarves as well as goods decorated with visuals like Mount Fuji, the Japanese flag, and traditional motifs. Items can be purchased at stadiums, Fanzones, and via the online shop. 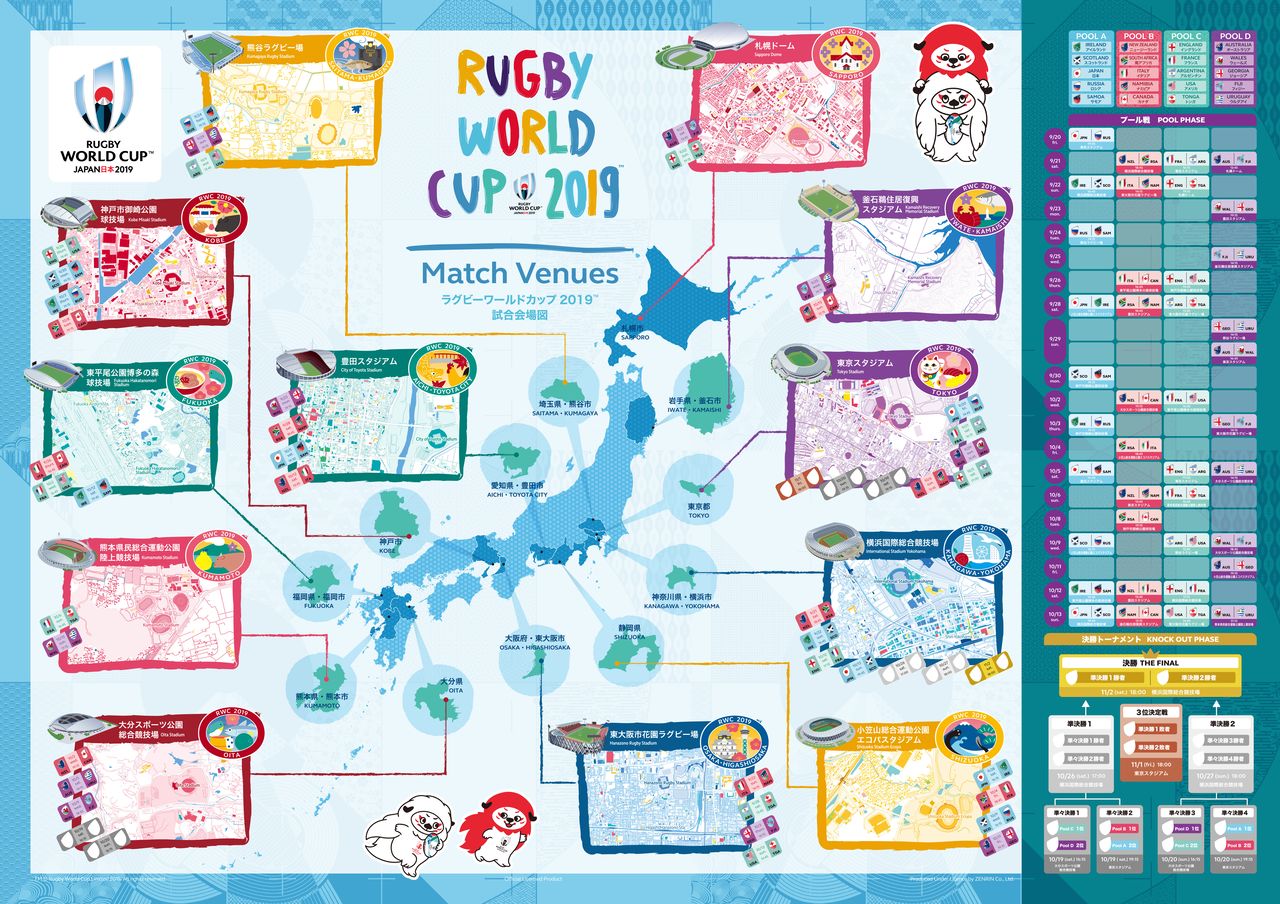 Many original products are available from the online shop, including bandanas and folders printed with a map showing the location of all 12 stadiums. (TM ©Rugby World Cup Limited 2015. All rights reserved.)

Goods are also available at the Rugby World Cup 2019 Megastore in Shinjuku, Tokyo. The store opened on August 22 near the west exit of Shinjuku Station. With over 1,000 square meters of floor space, it is the largest official merchandise vendor in Japan. 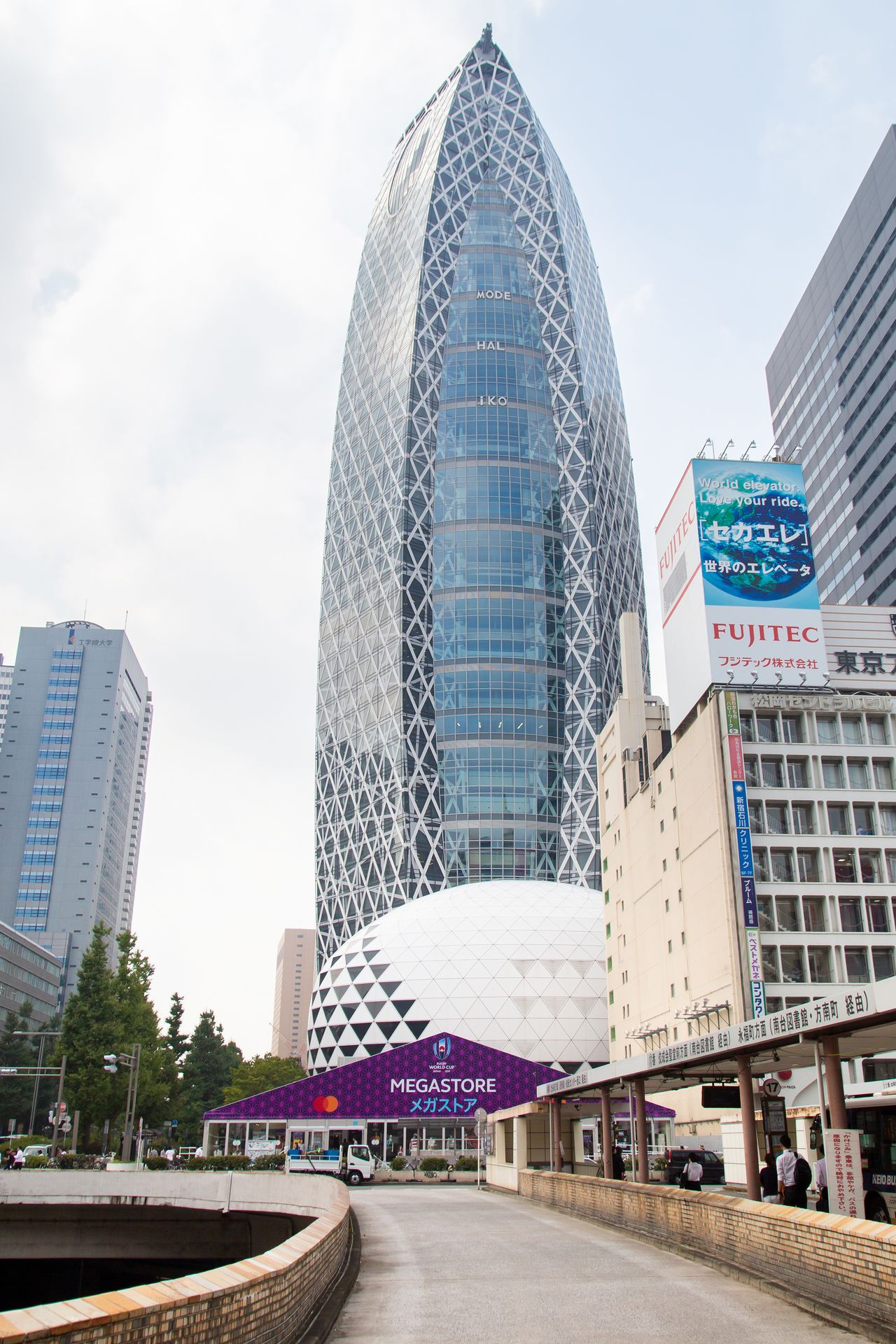 The Rugby World Cup Megastore is visible from the west exit of Shinjuku Station. The cocoon-like Mode Gakuen tower is a handy landmark. 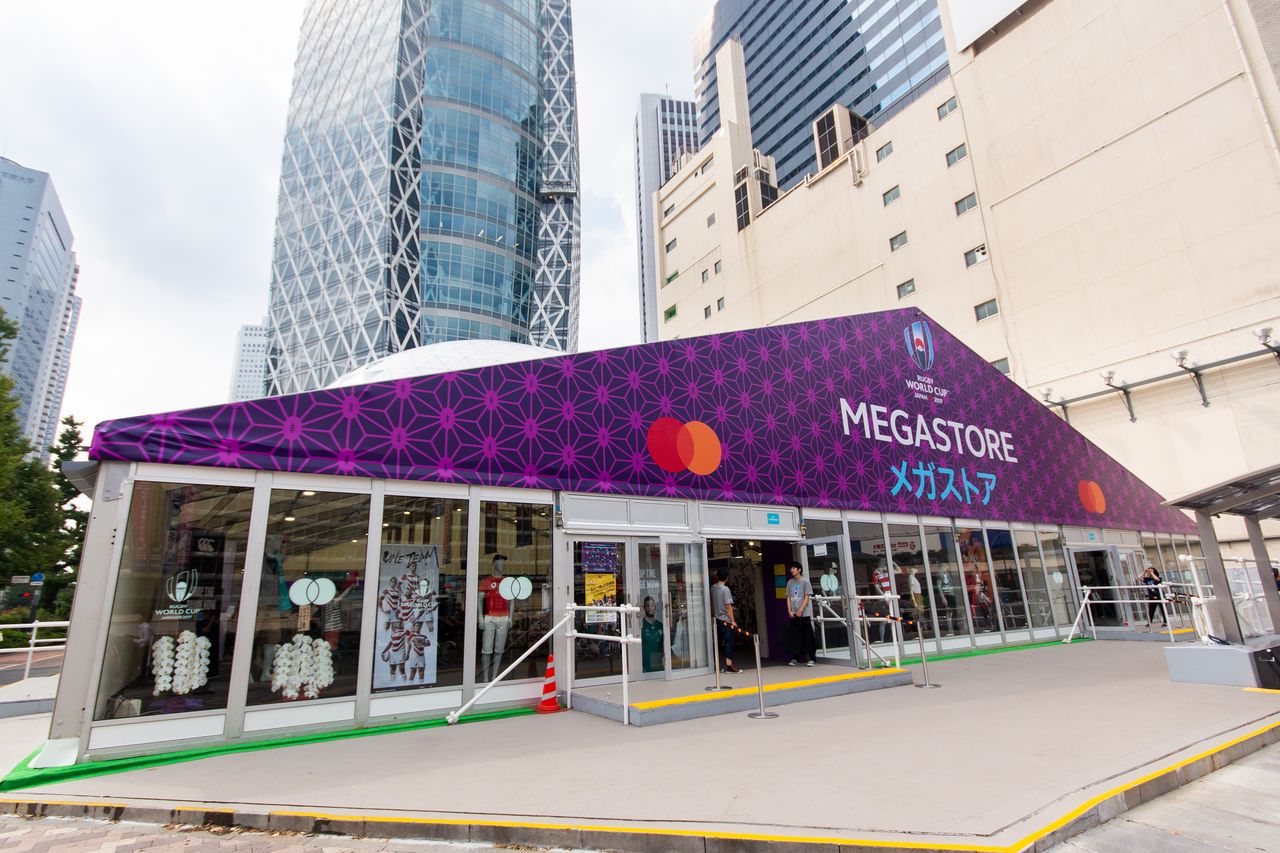 The front of the Megastore at Shinjuku Odakyū Park. 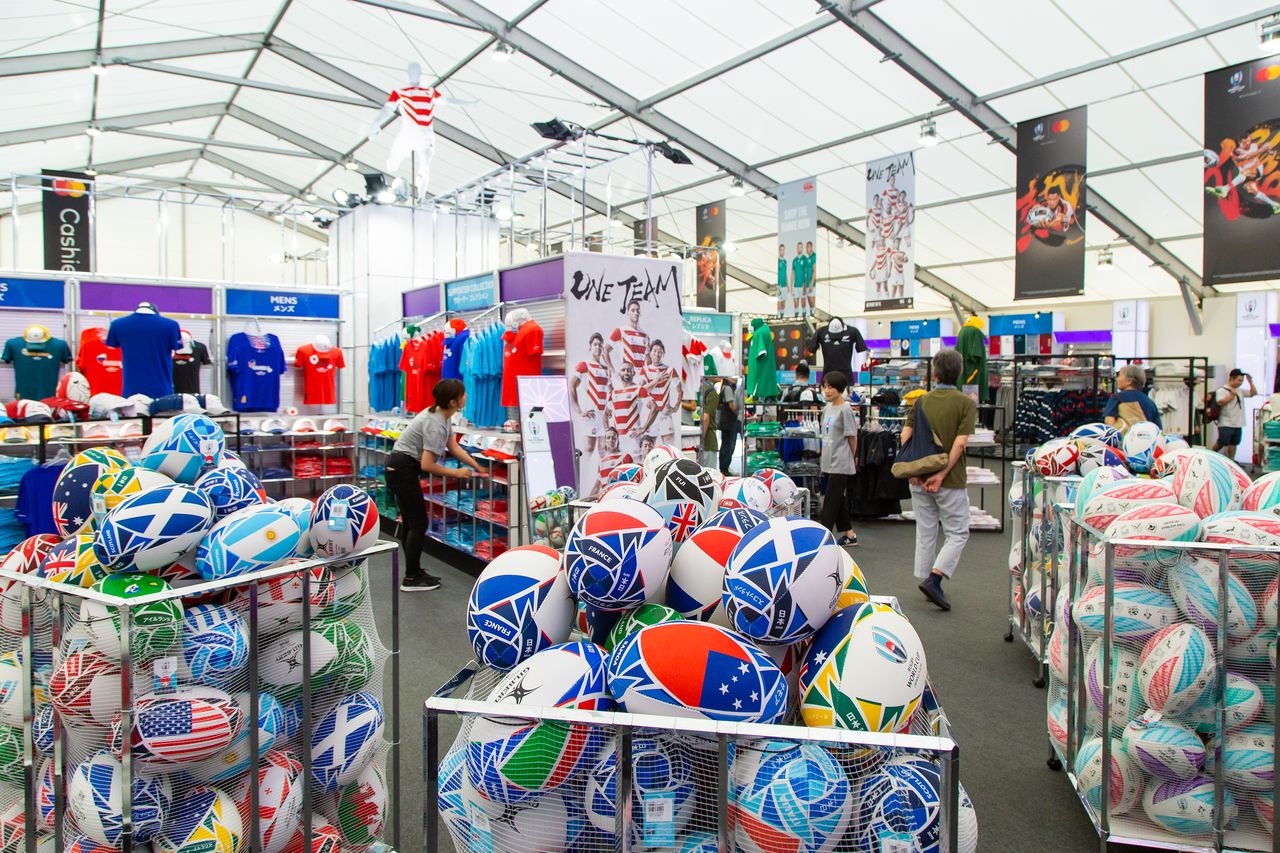 The Megastore has an array of merchandise, including balls featuring the flags of the competing nations.

The spacious Megastore stocks around 850 supporter goods, including jerseys, scarves, and caps for all 20 competing nations, together with World Cup 2019 commemorative rugby balls, and dolls of tournament mascot Ren-G. The store is open until November 20. 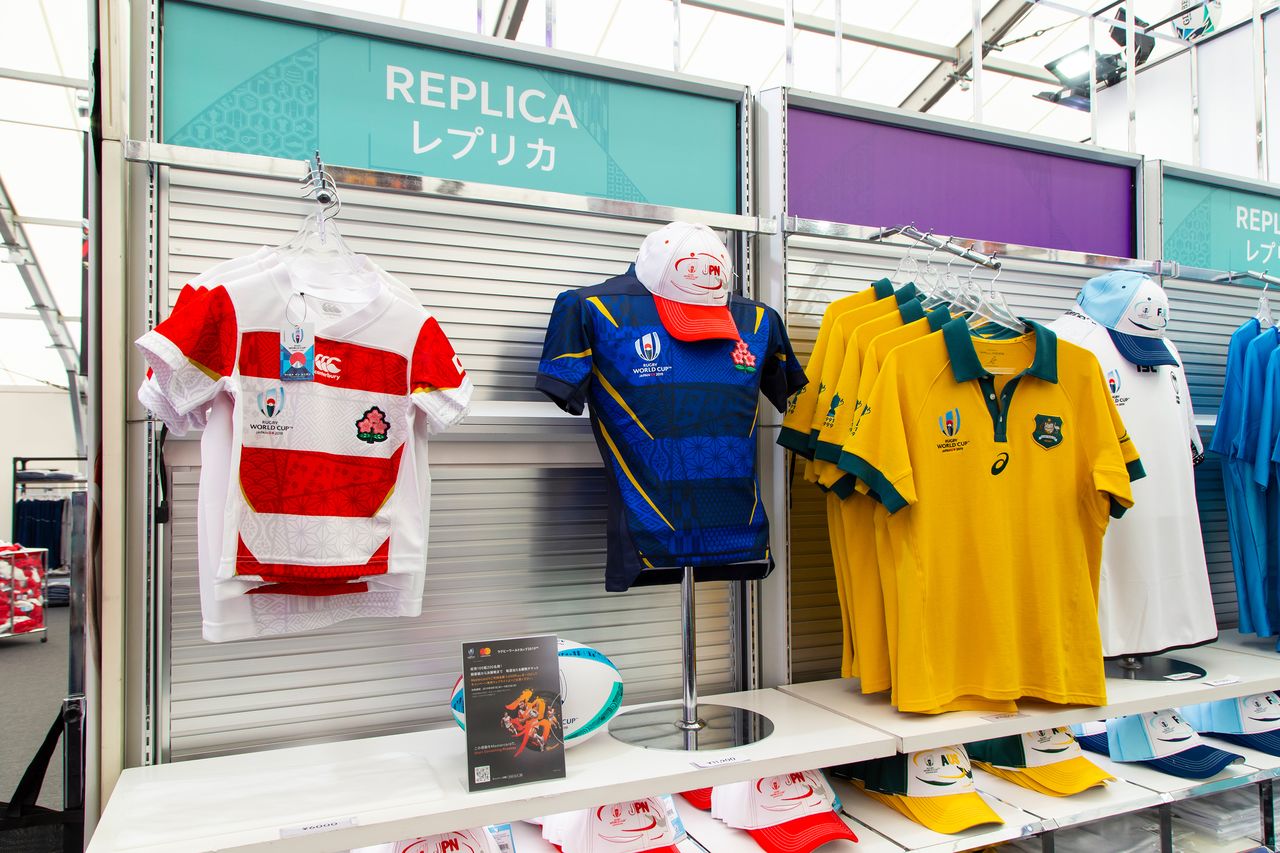 Jerseys are popular items and some sizes have already sold out. 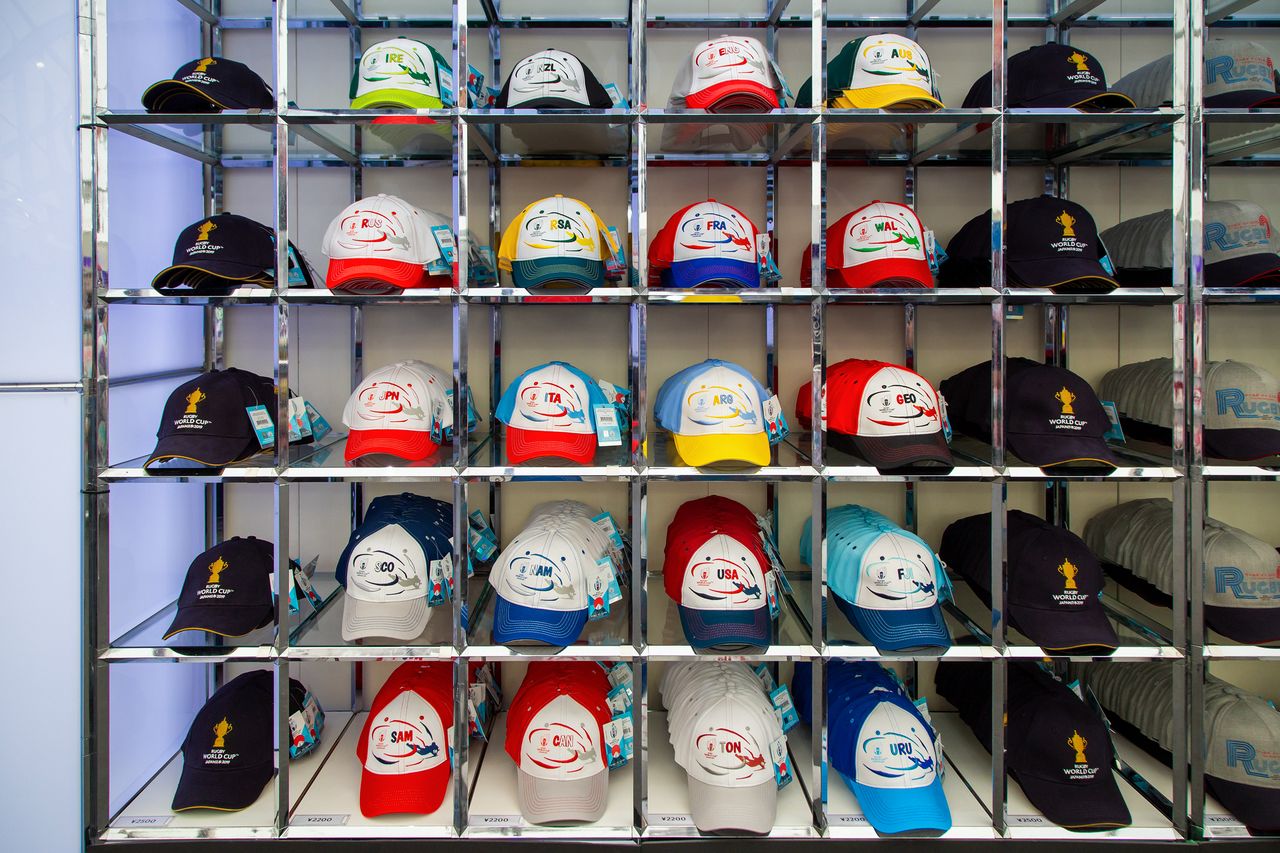 A selection of caps on sale at the Megastore. 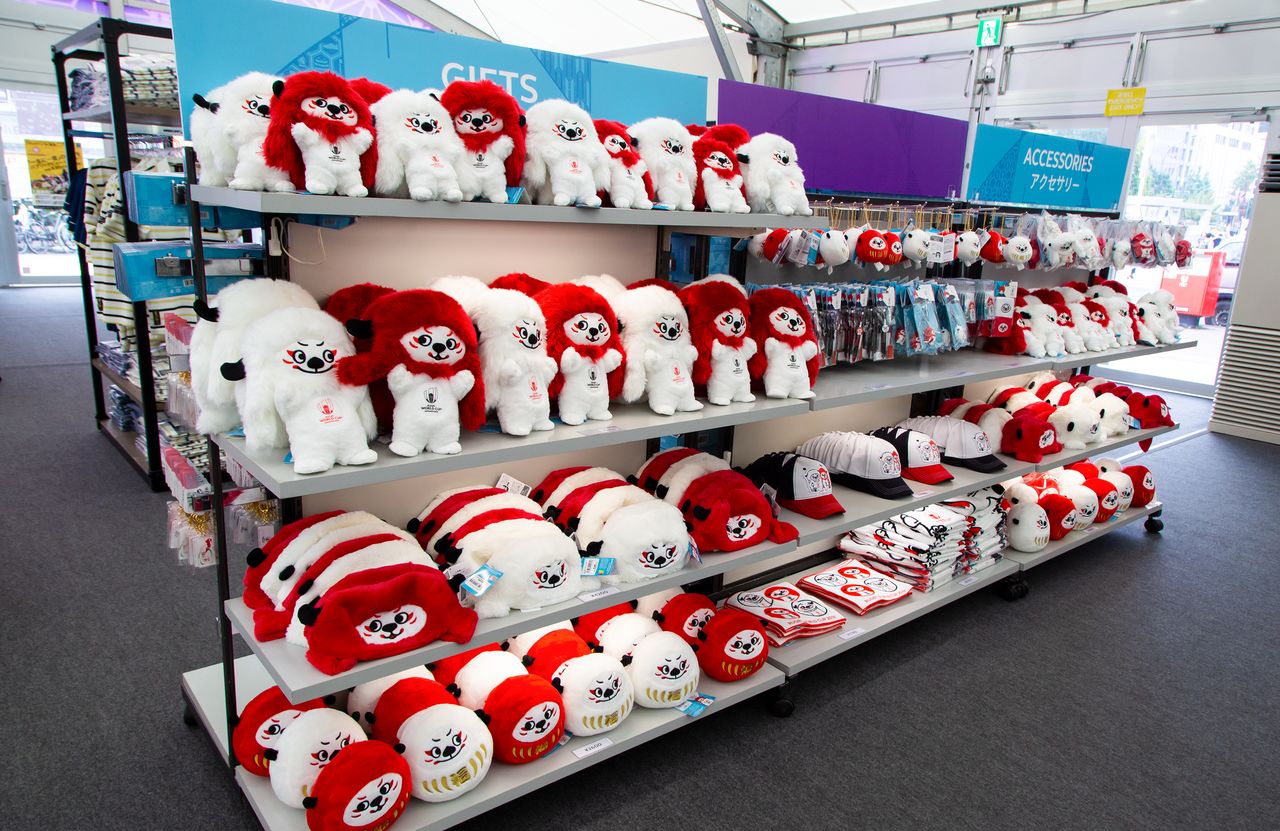 Red and white dolls of Ren-G, the Rugby World Cup 2019 mascot. The character is modeled on Japanese renjishi, a mythical lion-like creature. 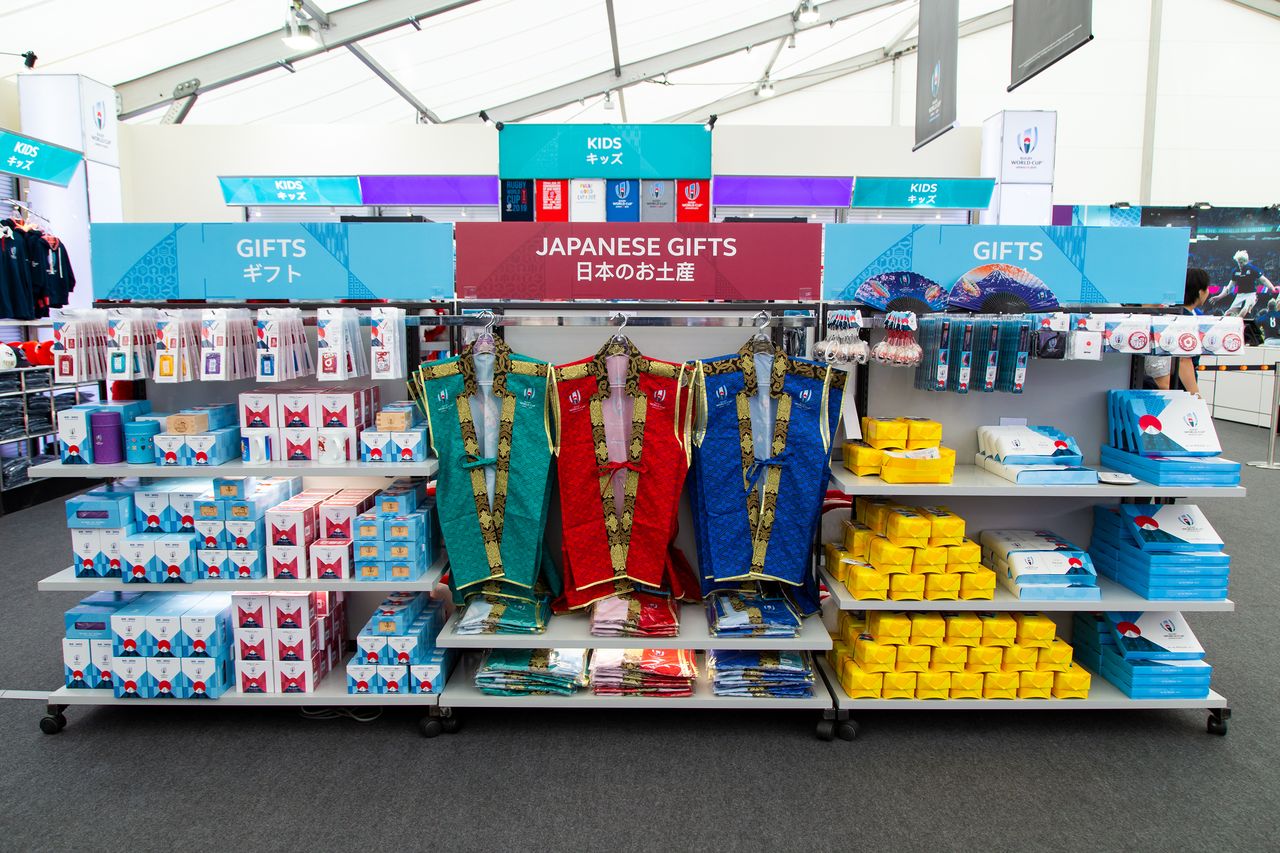 Traditional jinbaori battle surcoats available in team colors are some of the unique items on offer.

(Originally written in Japanese. Reporting and text by Nippon.com. Banner photo: A display of flag balls at the Rugby World Cup Megastore.)