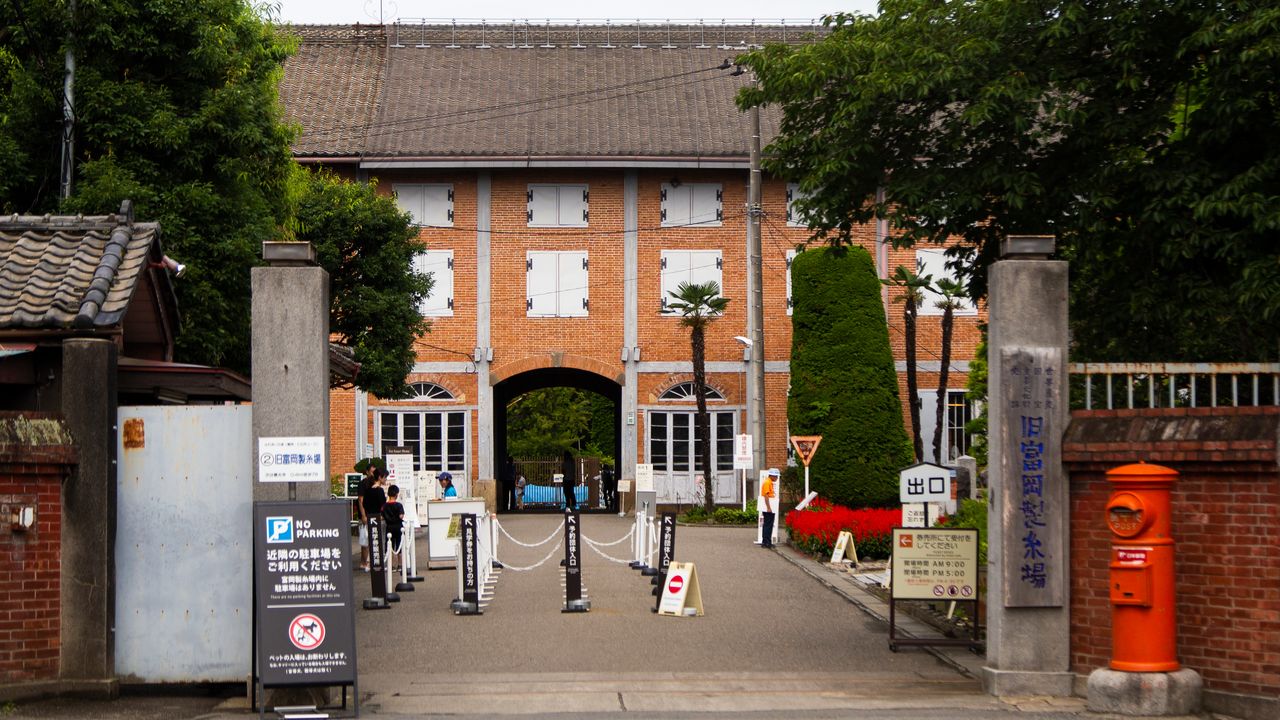 A Guide to the World Heritage Tomioka Silk Mill

Travel Nov 28, 2019
The Tomioka Silk Mill in Tomioka, Gunma Prefecture, is a history buff’s ideal destination for a day trip from Tokyo. Visitors to the mill can learn about its role in Japan’s modernization in the Meiji era (1868–1912), silk-reeling technology, and the lives of the mill’s women workers.

The Tomioka Silk Mill, in Tomioka in the southwestern corner of Gunma Prefecture, began operating as Japan’s first large-scale, Western-style silk-reeling factory in 1872. In the years after Japan opened to trade with the world in the late nineteenth century, its main export product was raw silk. Facing the urgent need to earn foreign currency, the Meiji government decided to build a government-owned factory to improve quality and introduce Western-style technology to its silk-reeling industry.

The mill, sold to private interests in 1893, continued to operate until 1987. The original buildings have been preserved intact, witness to over 100 years of Japan’s silk-reeling industry. The complex is now a popular tourist attraction that was inscribed as a UNESCO World Heritage site in 2014.

Sightseeing by Bus and Guided Tour

A popular way of getting from Jōshin Dentetsu railway’s Jōshū Tomioka station, the closest rail access point, to the mill is the Machinaka excursion sightseeing bus, which leaves from the parking lot northeast of the station. For those who prefer to walk, the site is about 15 minutes away on foot. Aboard the bus, volunteer guides describe the passing scenery and points of interest in the town, so visitors can plan the spots they’d like to visit on the way back. A ¥100 all-day ticket for the sightseeing bus bought upon boarding allows unlimited trips during the day. The bus will stop along its route to pick you up if you raise your hand, even when you aren’t at a bus stop. 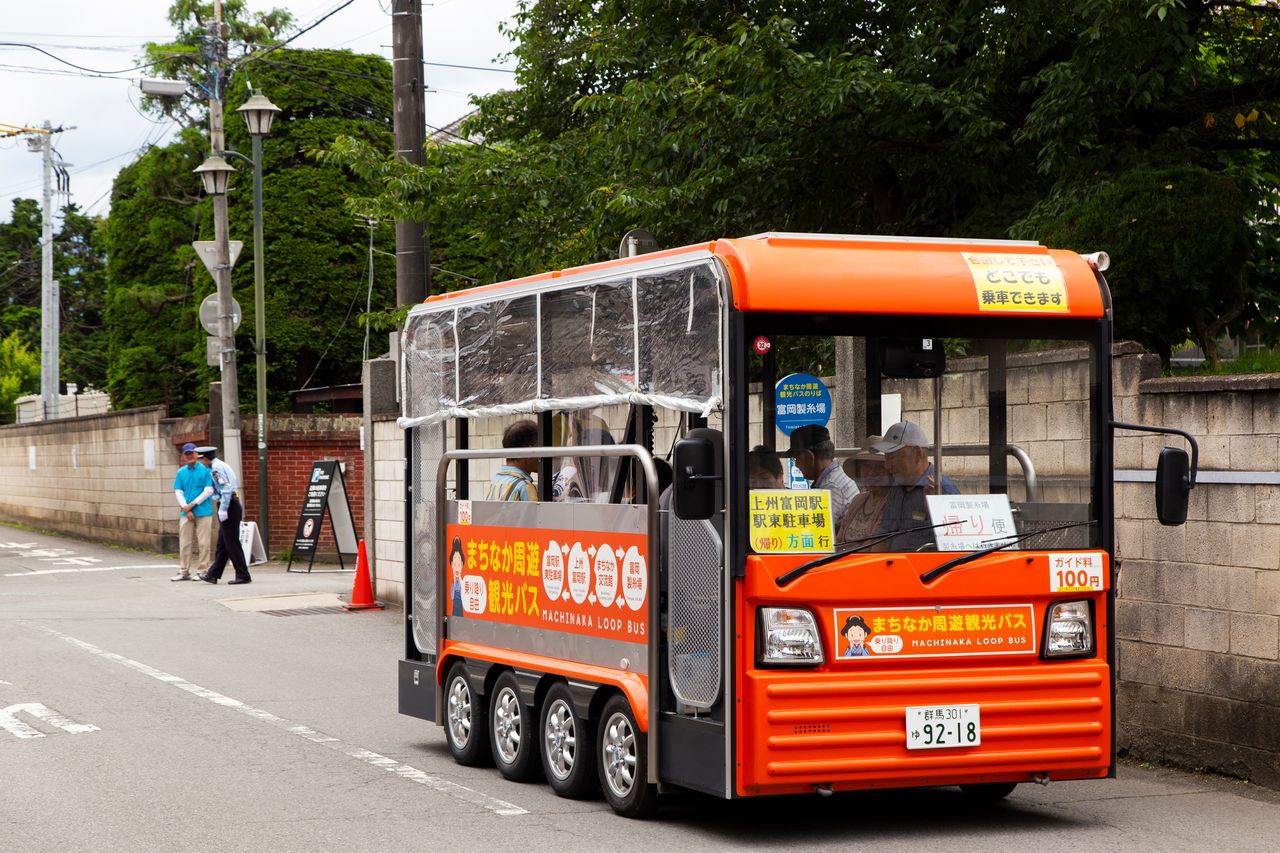 The Machinaka sightseeing excursion bus makes the leisurely 20-minute trip between the parking lot near Jōshū Tomioka station and the Tomioka Silk Mill.

Past the main entrance, the first building that comes into view is the East Cocoon Warehouse, which was used to store cocoons awaiting processing. This elegant building is an imposing structure with a frontage of 100 meters.

At the rear of the site, the West Cocoon Warehouse stands parallel to the East Cocoon Warehouse. To the left, the silk reeling mill, a 140-meter-long structure, stands between the two warehouses, joining the three buildings in a squared-off U shape. These original structures date from the mill’s founding and form the heart of this heritage site designated a national treasure. Surrounding them are various Western-style structures that housed the foreign experts recruited from France to supervise the project in the initial stages and dormitories for the mill’s female workers. 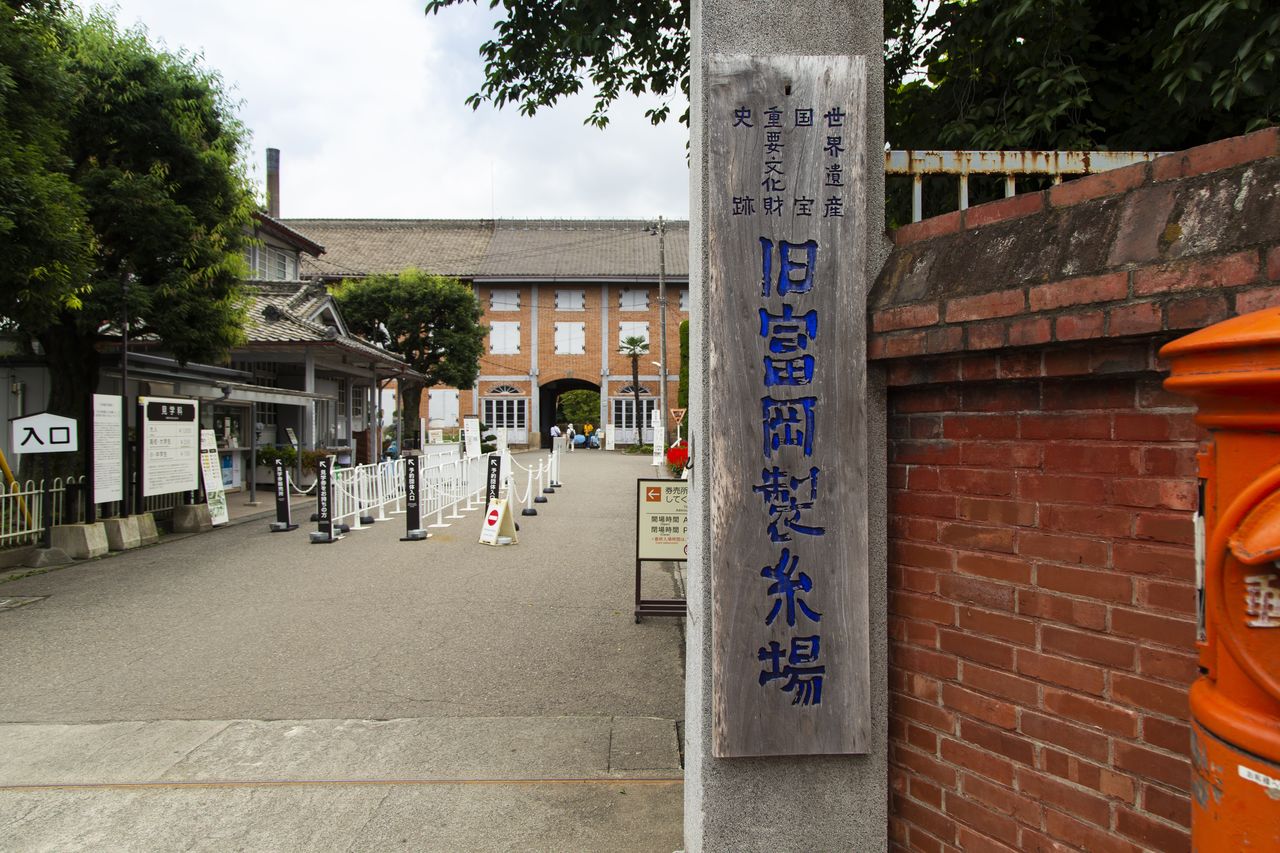 The East Cocoon Warehouse in the background is visible from the mill entrance. Audio guides for available for rent from the ticket booth on the left. 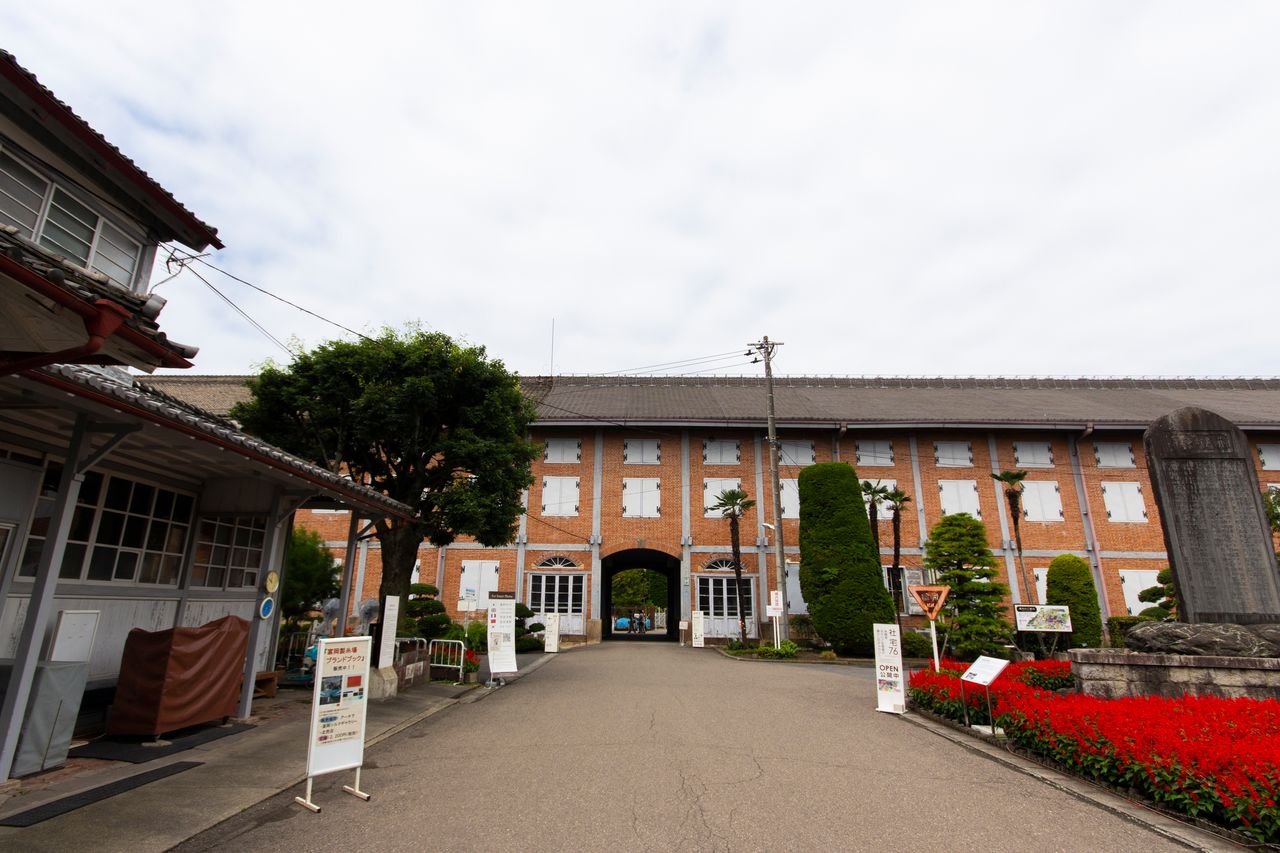 The buildings were constructed with bricks laid between wooden posts and beams in a style known as timber framing. The stone monument to the right commemorates a visit to the mill by Empress Shōken and Empress Dowager Eishō in 1873.

Many visitors take advantage of the guided tour of the site. This 40-minute tour, given in Japanese, describes the mill’s history, silk-reeling technology, and the purpose of the buildings on the site and their various features of interest. After the tour, visitors are free to look around at their leisure and take in the various exhibition halls and galleries on the grounds, which can help them learn more about this pioneering site. Tours start every 30 minutes, and the fee is ¥200. If you can’t join a tour, rental audio guides are available in several languages. 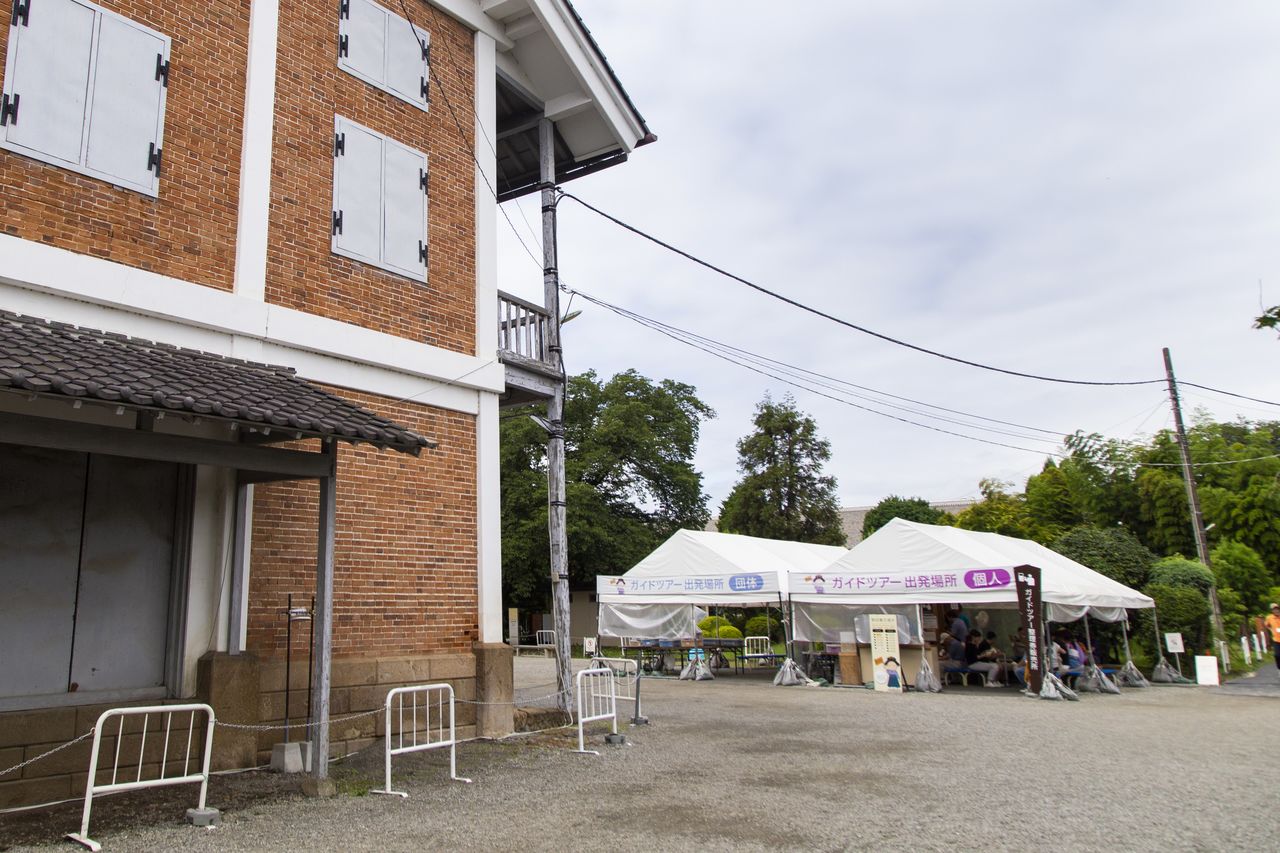 Guided tours start from the tent at the rear of the East Cocoon Warehouse. Tickets go on sale 30 minutes before the start of each tour. 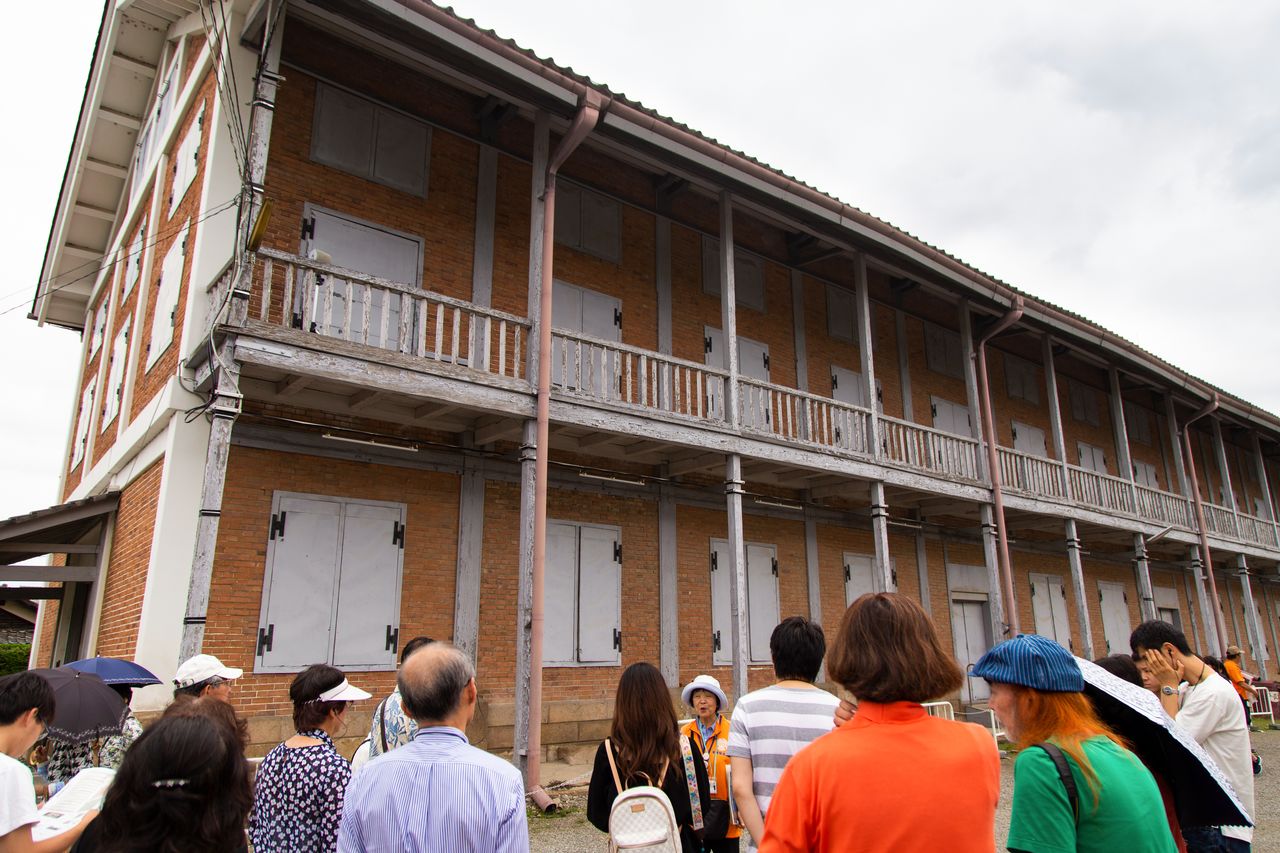 The guided tours, which give a brief rundown of the history and significance of the mill, are a popular attraction.

All About Silk Reeling

At the larval stage, silkworms produce silk thread for two days, which they form into cocoons. Boiling the cocoons loosens the substance holding the thread together, and an implement made from dried rice stalks is used to detach the thread and unravel the cocoon. The thread is reeled onto spools; after it is dried, the material recovers its initial resilience. Visitors to the mill can see the actual reeling process, with a cocoon about 3 centimeters long producing over 1,000 meters of thread. 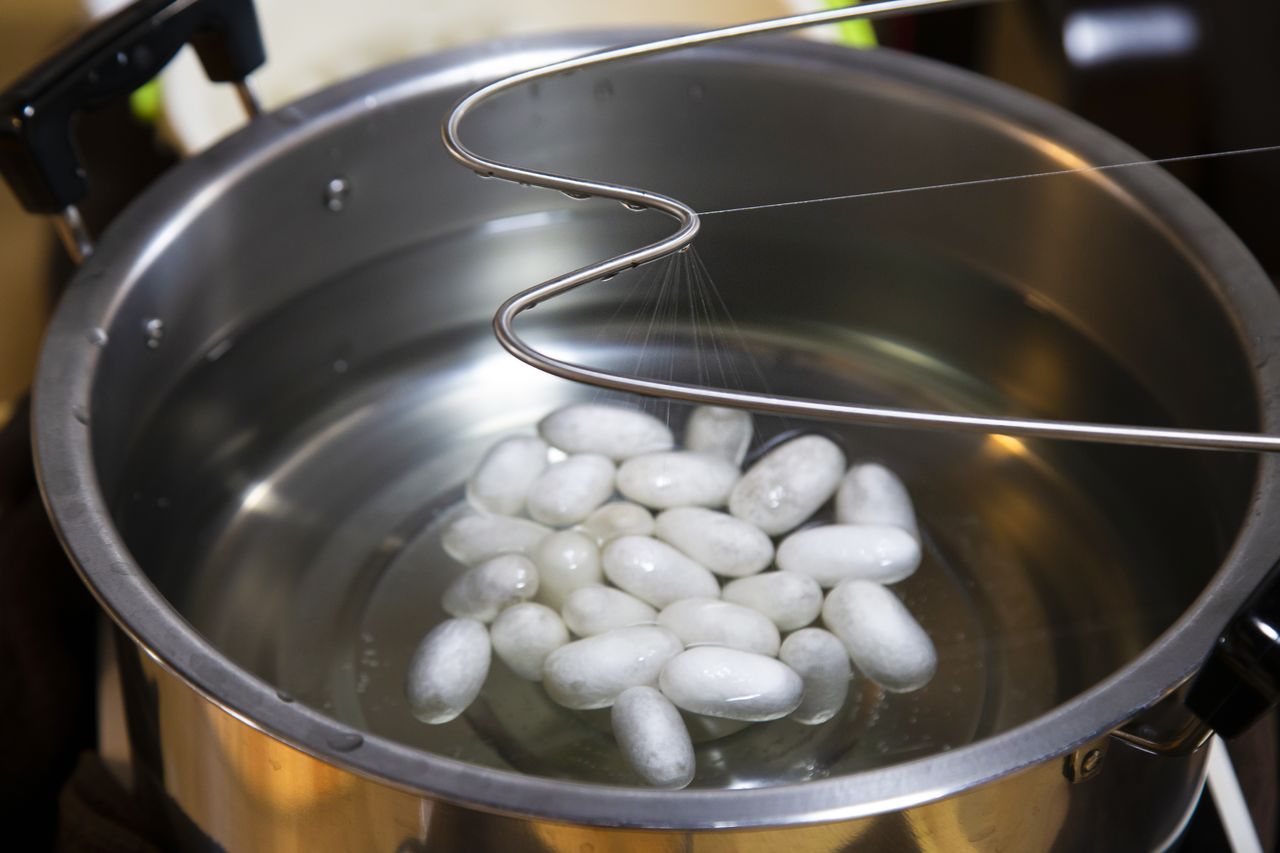 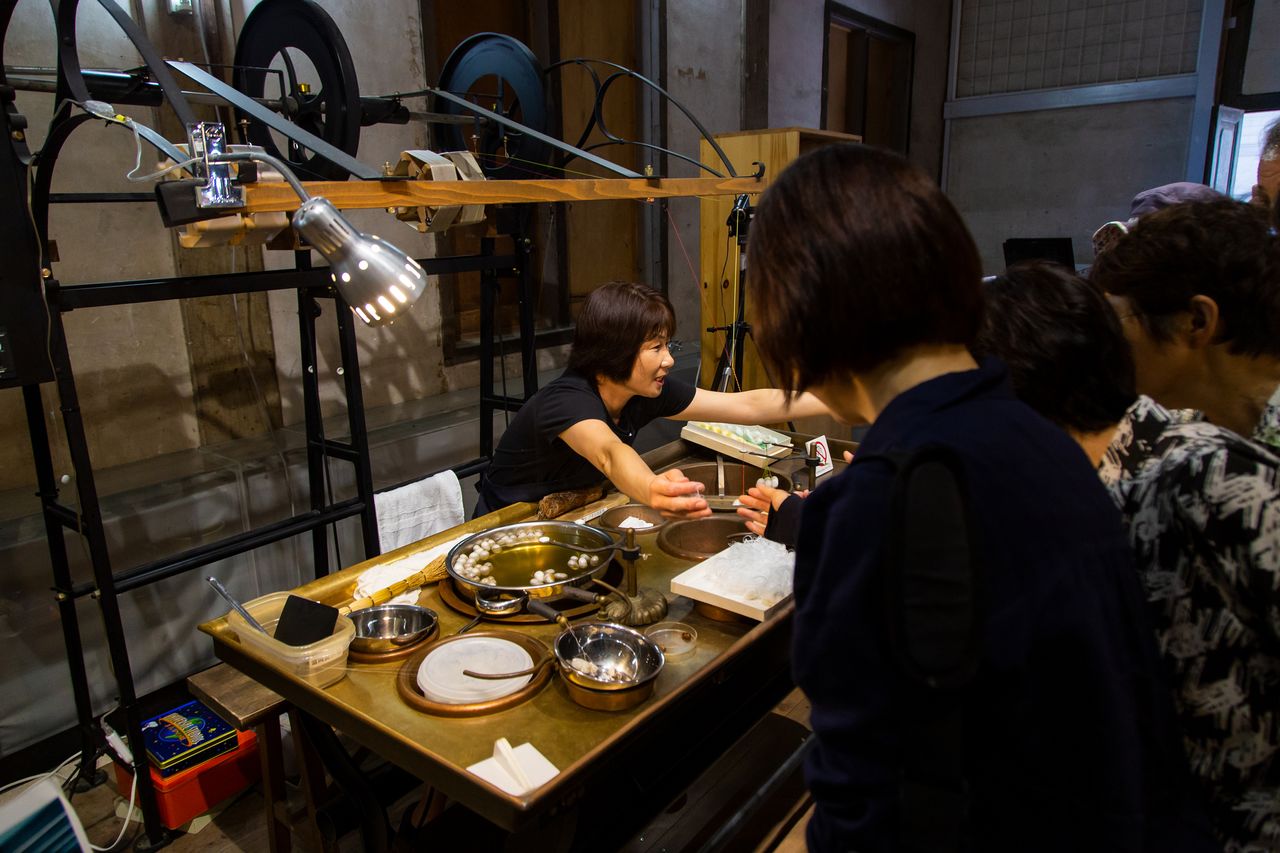 A demonstration using a French-style silk reeling machine is staged in front of the Silk Gallery at the East Cocoon Warehouse from 10:00 am to 11:30 am and 2:00 pm to 3:30 pm on weekdays. On weekends and holidays, visitors can view and take part in a reeling demonstration.

The cocoons are heated before the larvae inside hatch and are dried to be set aside for later use. Today, adjusting the temperature for raising the silkworms and controlling cocoon quality makes it possible to extend the harvest period, but in the past, cocoons were all harvested at the same time. Thus, to secure enough cocoons for a year’s production, large quantities were needed, which were stored in the huge warehouses on the mill site.

The East Cocoon Warehouse combines Japanese and Western architectural elements. The walls are constructed from bricks made by Japanese tile craftsmen, while the roof is topped with traditional tiles. To prevent mold from forming on the cocoons stored inside, the building features many large windows to ensure good ventilation. The first floor of the building includes a display area, a silk gallery, and a gift shop. 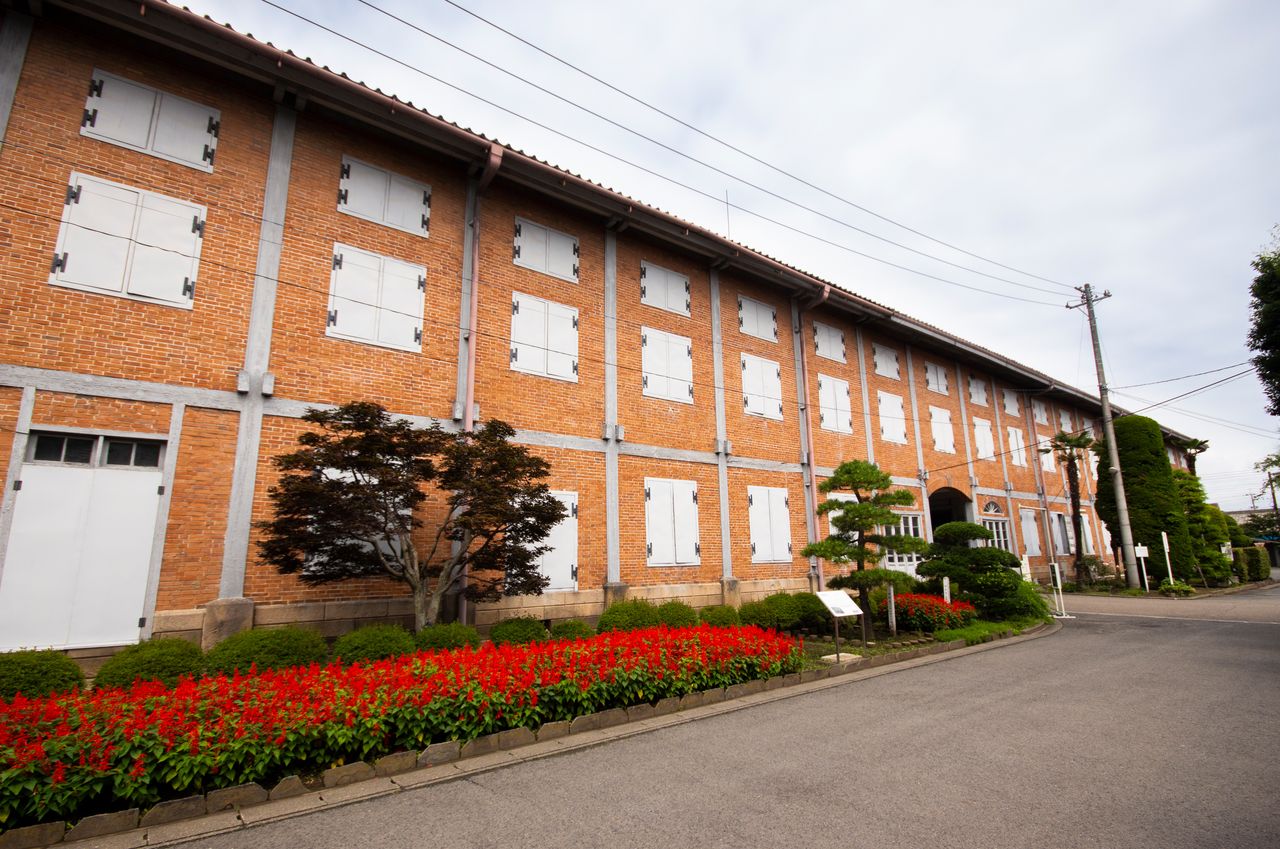 The East Cocoon Warehouse has many windows, ensuring good ventilation and protecting the cocoons from mold. 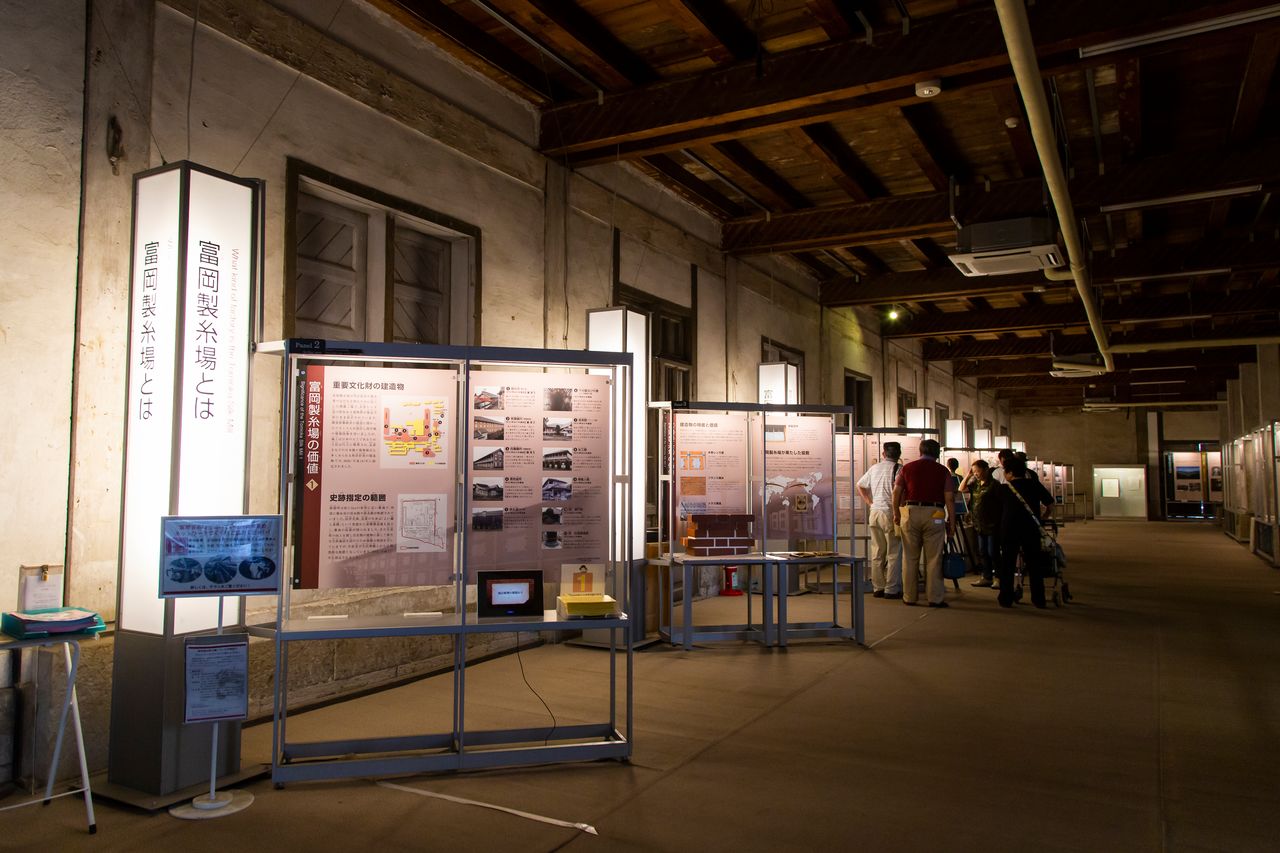 The first-floor display area includes display panels describing the history of the mill and explaining the features of the buildings on the site. There is also a video viewing area here. 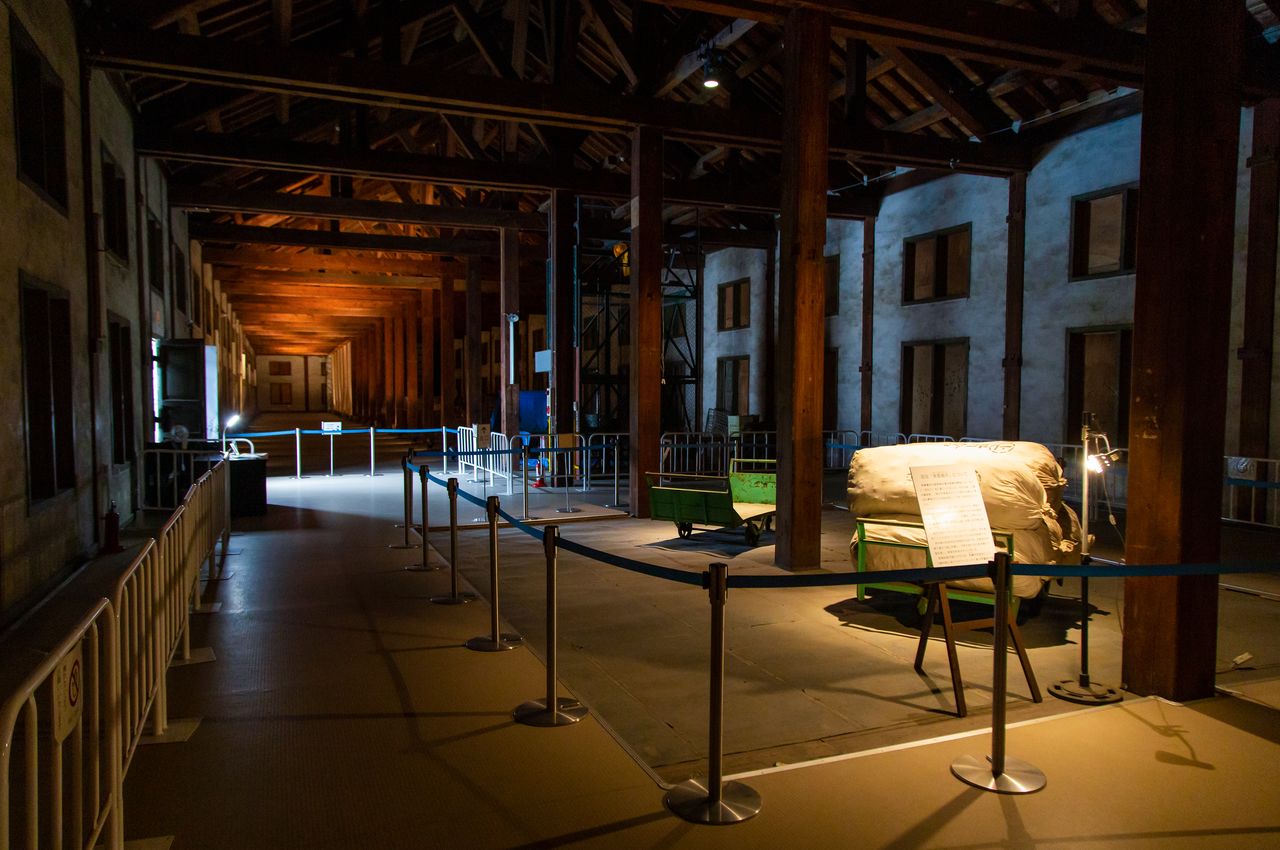 The second floor of the East Cocoon Warehouse is open to visitors for a limited period. This is where the cocoons used for silk reeling were stored. 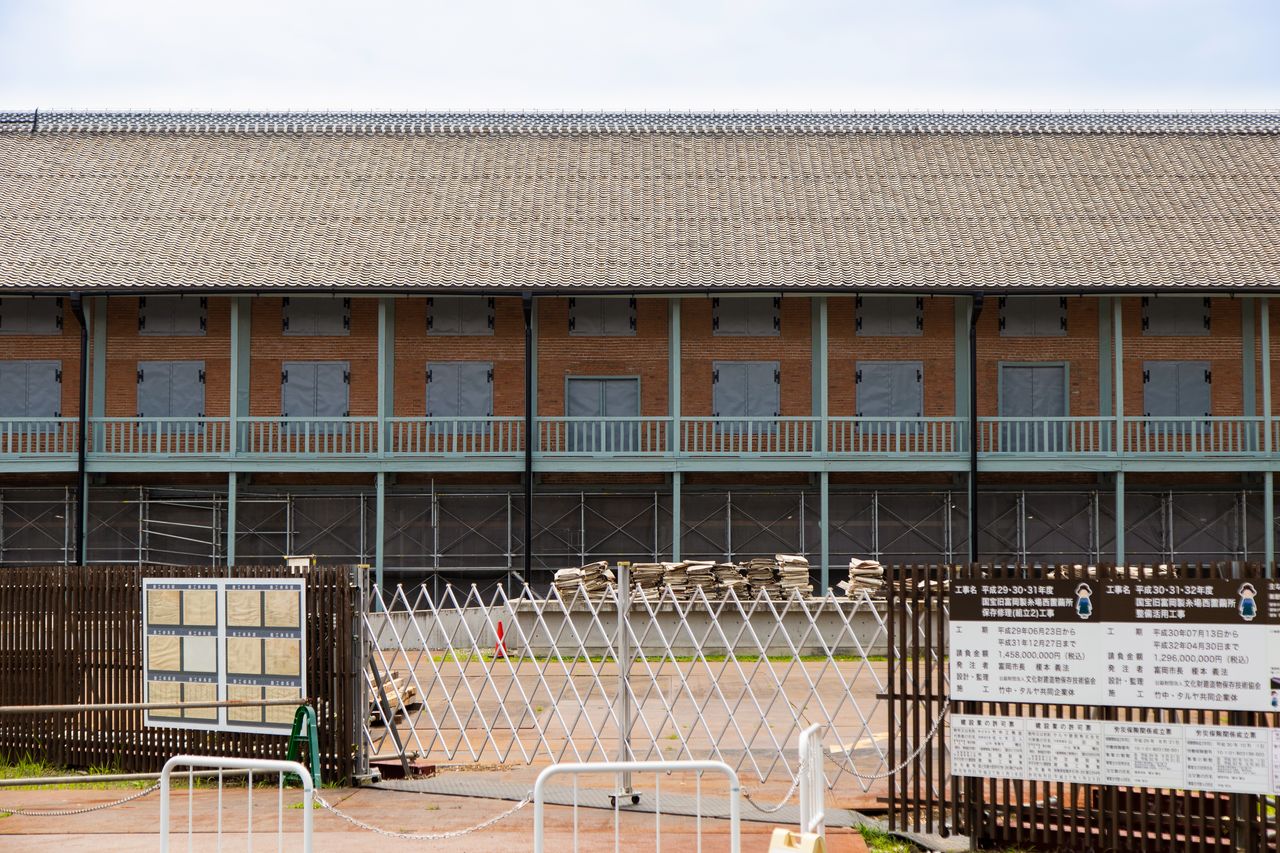 Restoration work at the West Cocoon Warehouse is underway. The building is scheduled to open to the public in autumn 2020.

The mill where female workers worked had large windows, which made it airy and bright. Since Japan did not have electric lights when the mill was built, plentiful natural light was needed for the workers to reel the thin silk fibers. The large glass windowpanes and steel window frames were imported from France.

Initially, the French reeling machines were steam-powered and the openings provided by the small windows in the monitor roof atop the building allowed the steam to escape. The automatic silk-reeling machines in the mill today were made by automobile manufacturer Nissan and were installed in the late 1960s. 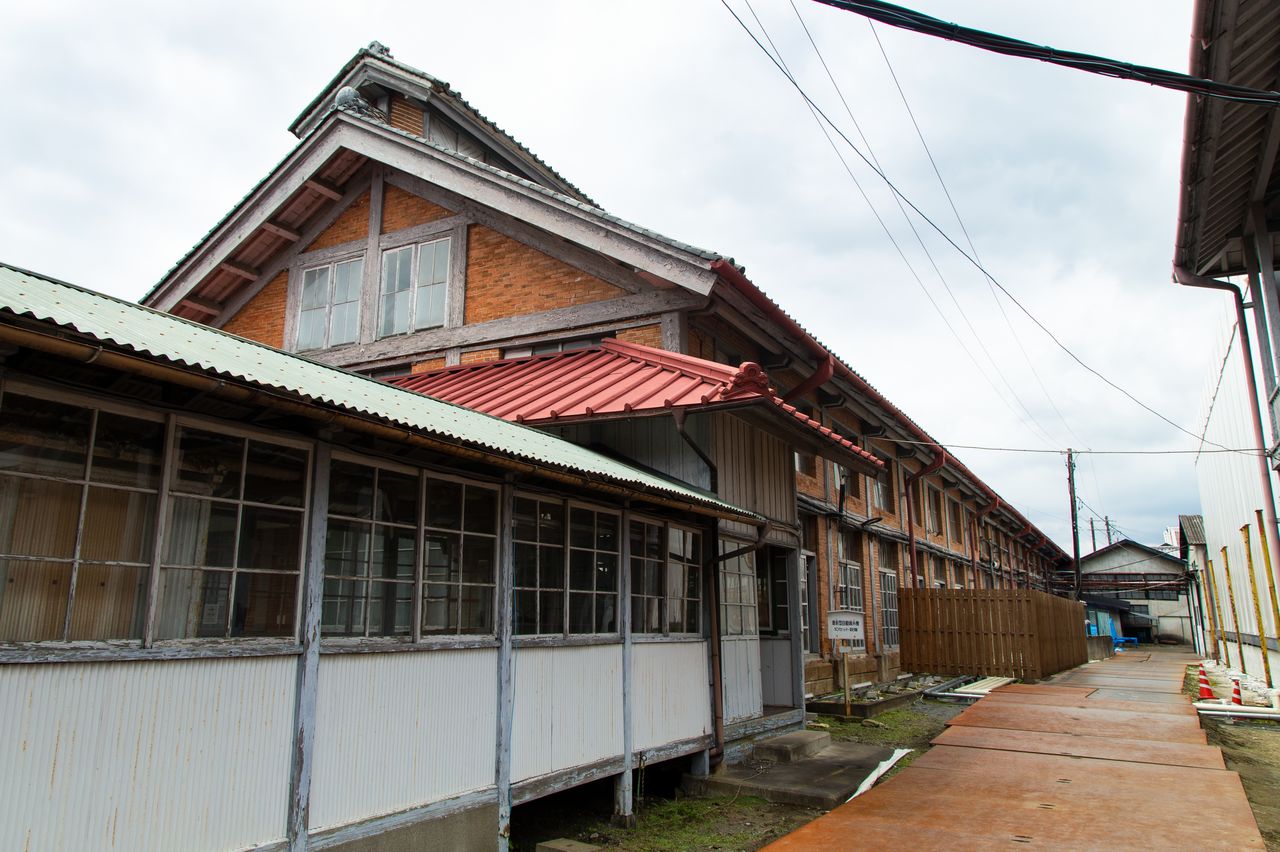 A small monitor roof sits atop the roof of the mill to provide ventilation. 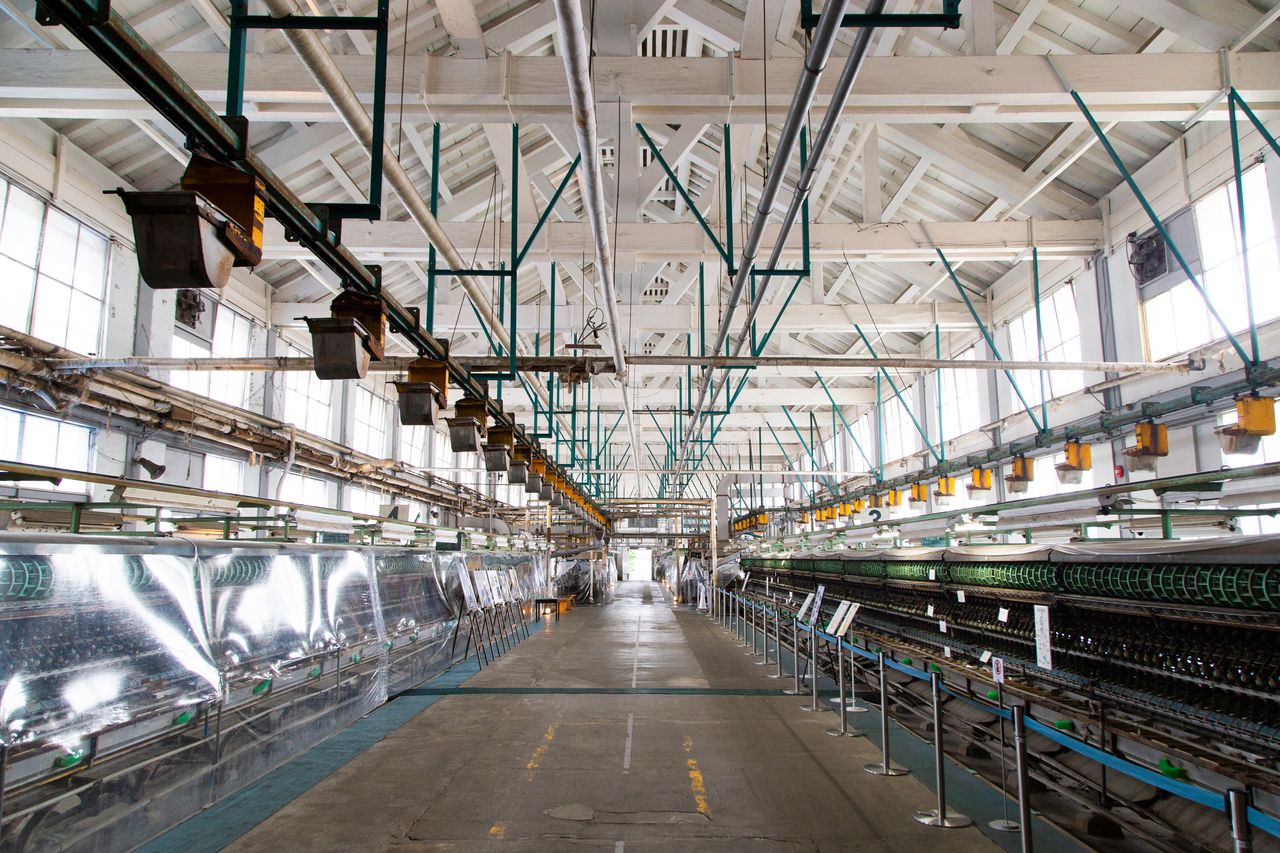 The mill’s ceiling is held up by steel roof trusses to create a spacious, pillar-free interior. 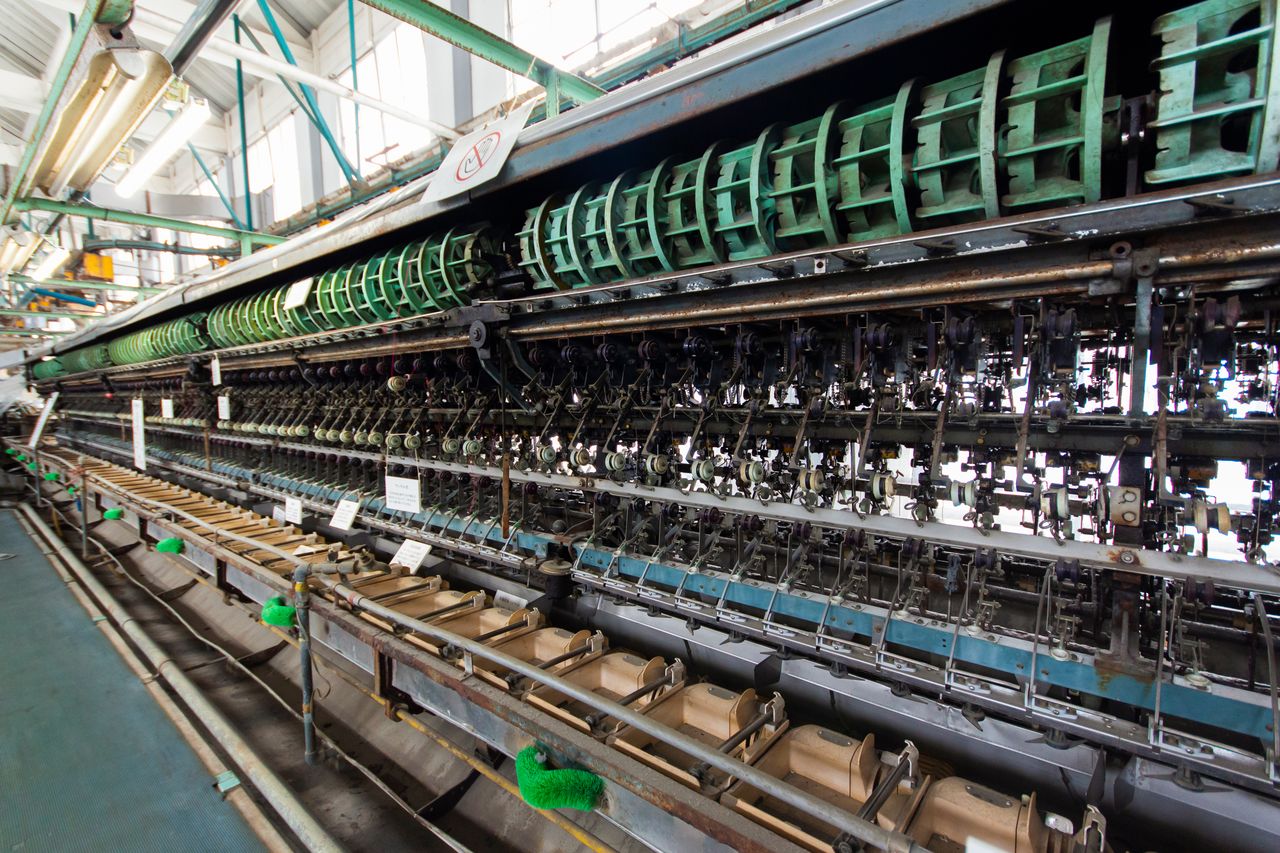 Automated reeling machines, which first appeared in the 1930s, greatly reduced the number of workers needed for operations.

Of the many Western-style buildings and dormitories on the mill grounds, the most impressive structure is the Brunat House, the home of Paul Brunat, a Frenchman hired by the Meiji government to serve as the mill’s technical director. Brunat lived there from 1872 to 1876, after which the large building, with a floor area of more than 900 square meters, was used as a residence for the mill’s women workers and as a training facility.

The Brunat House, along with the residences of the French female instructors and male technicians, have been designated important cultural properties. But the French experts only lived there for two years before returning home, so the buildings were only used for their original purpose for a short time. 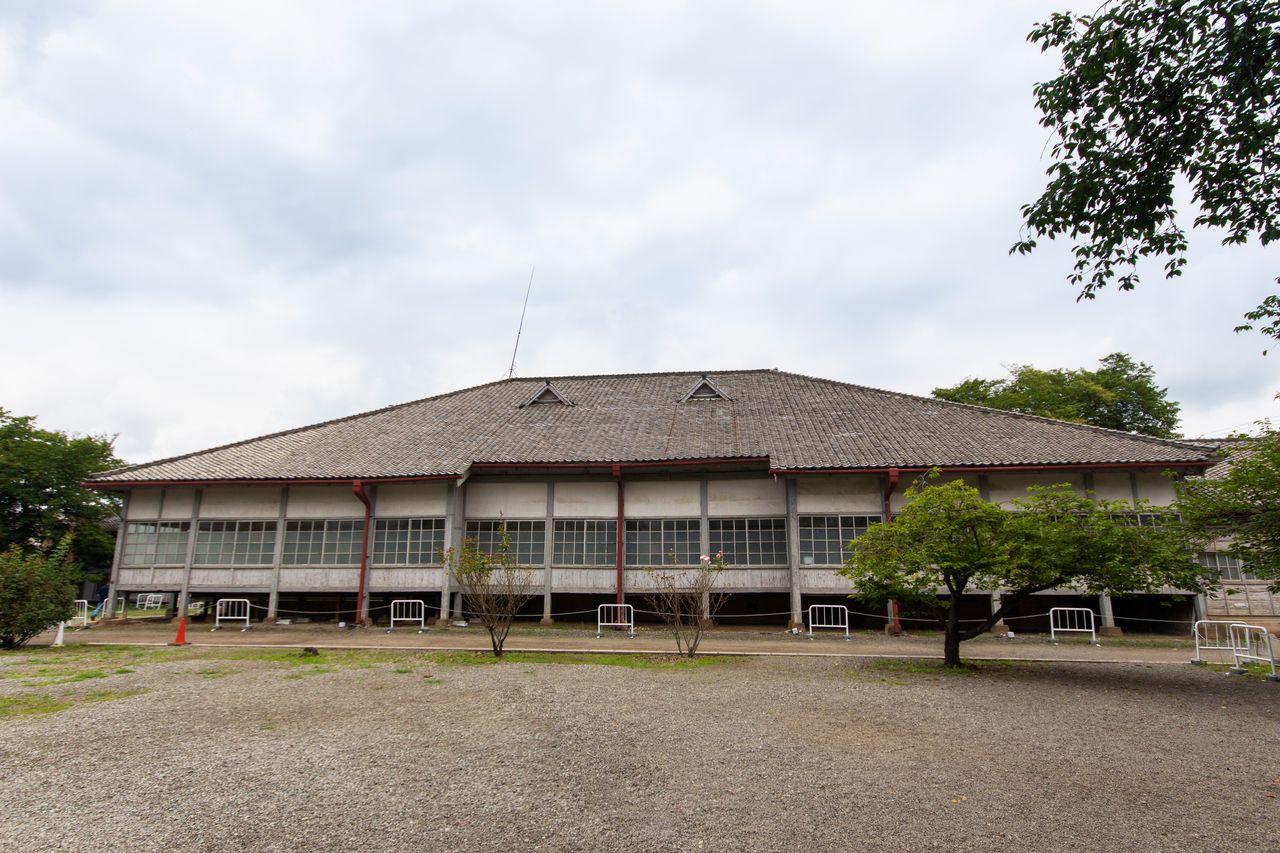 The size of mill director Brunat’s house is evident in this view of the building from the south. The lightning rod on the roof was unusual for the era. 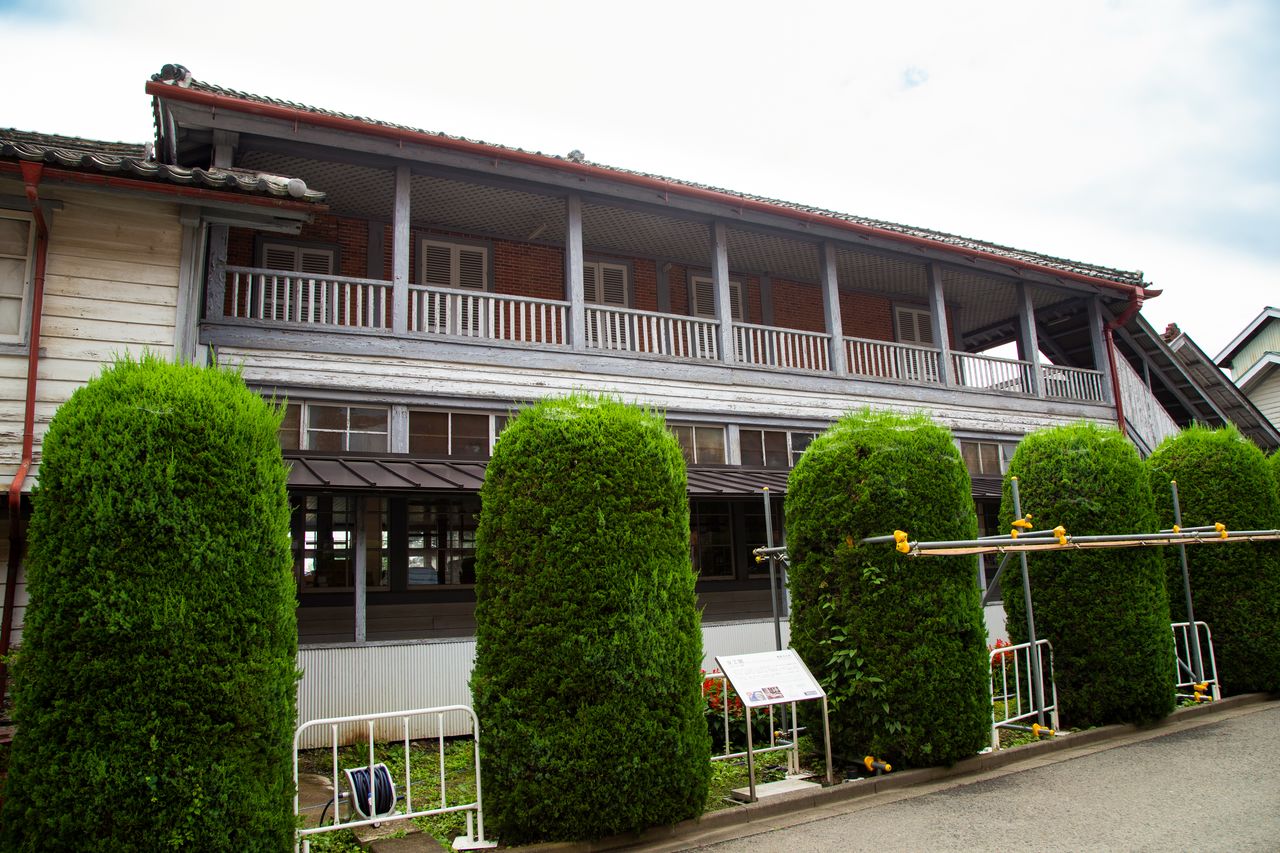 The residence for French female instructors is an elegant timber-framed structure. 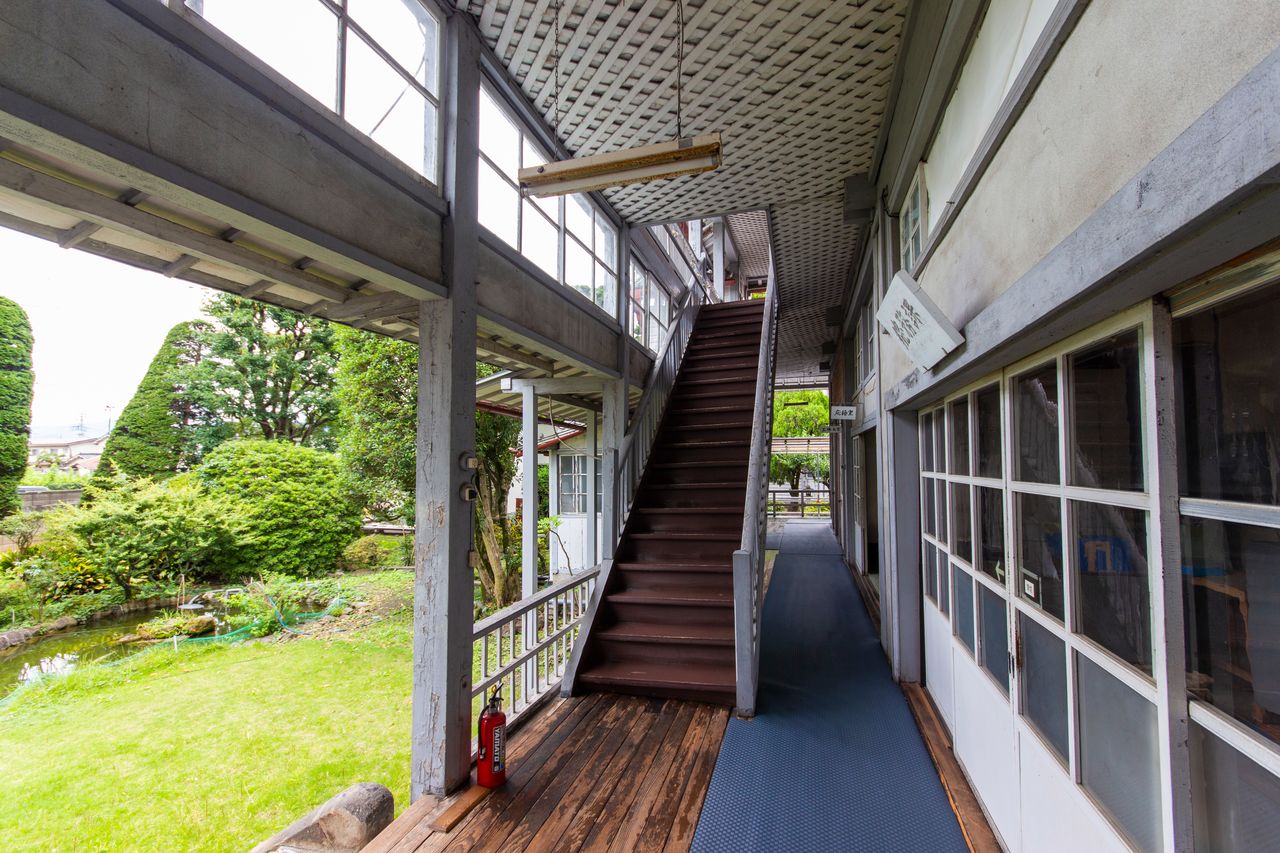 The Inspector’s House, closed to the public, is used as the office for the Tomioka Silk Mill site.

The mill also features many displays and buildings related to the lives of the women who worked there. During the years when it was government-owned, the mill served as a facility for training young Japanese women in the latest Western silk-reeling technology, after which they returned to their hometowns to help improve local silk-reeling businesses. The work environment was also very progressive for the era. Workers were provided with accommodation, bedding, and meals, and could receive free care from a medical clinic on the grounds.

Dormitories and company houses erected during the Taishō (1912–26) and early Shōwa (1926–89) eras still stand today, testimony to the lives of the people who lived and worked at the mill over the years. 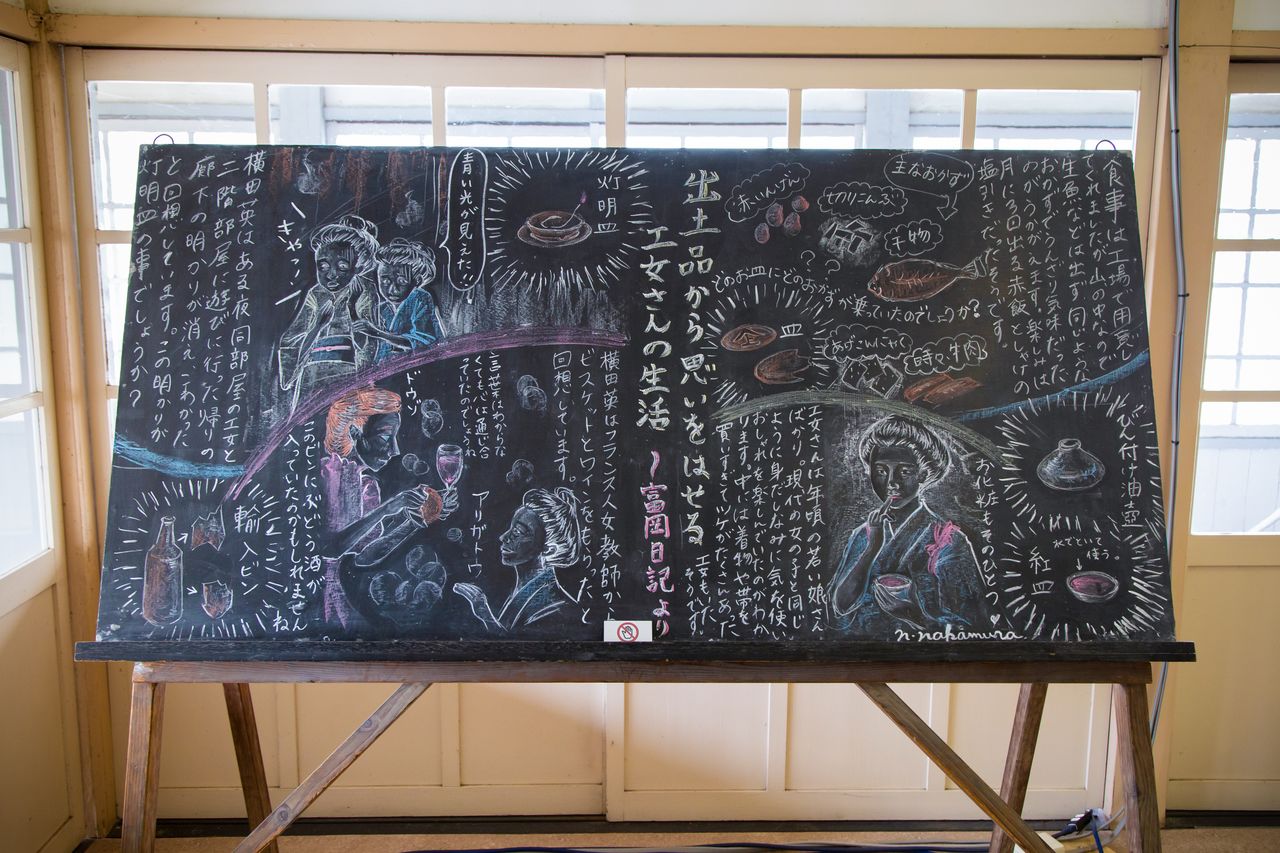 An excerpt from Tomioka Diary, a lively account of life at the mill written by one of the mill’s trainees, is copied onto this blackboard from the Haruna Dormitory, which was erected during the Taishō period. 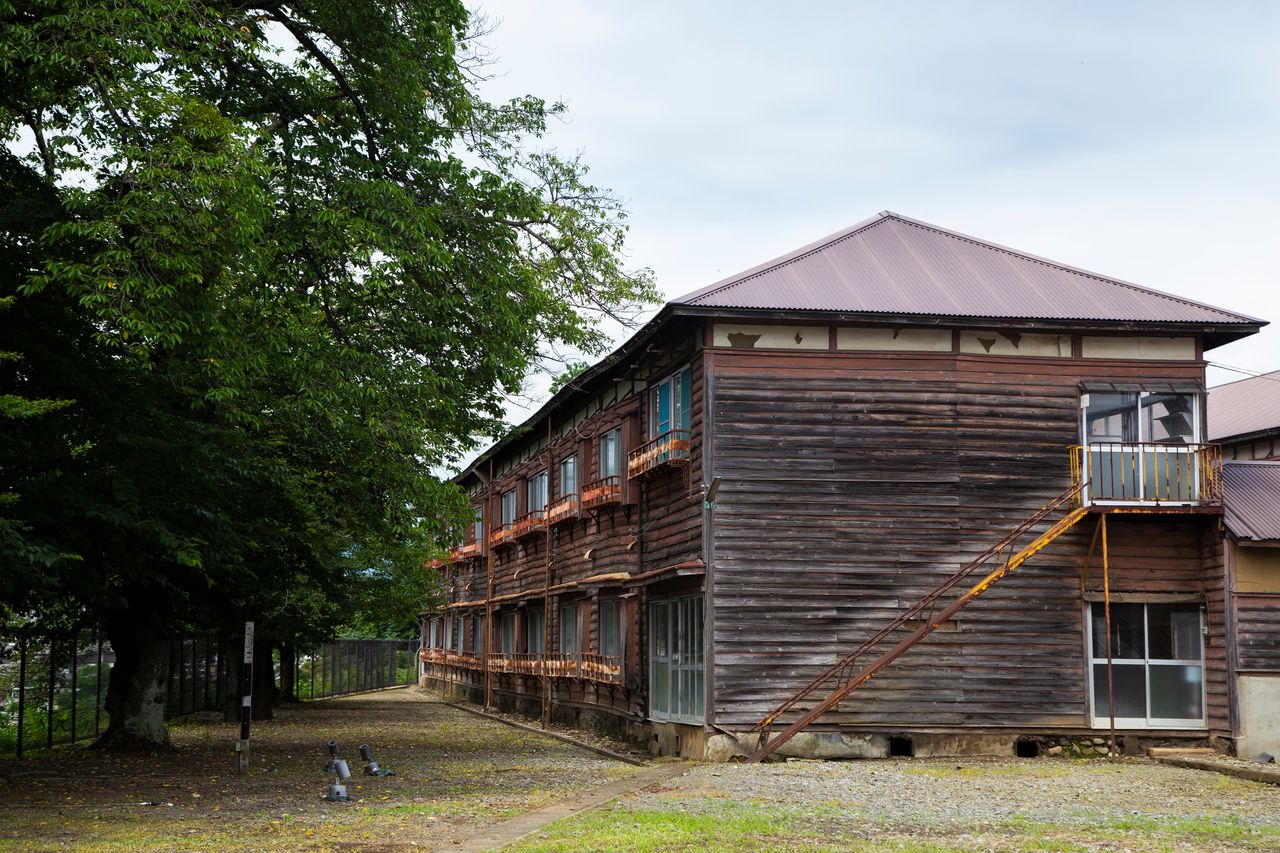 The Myōgi Dormitory, built in 1940 when the mill was under private ownership. 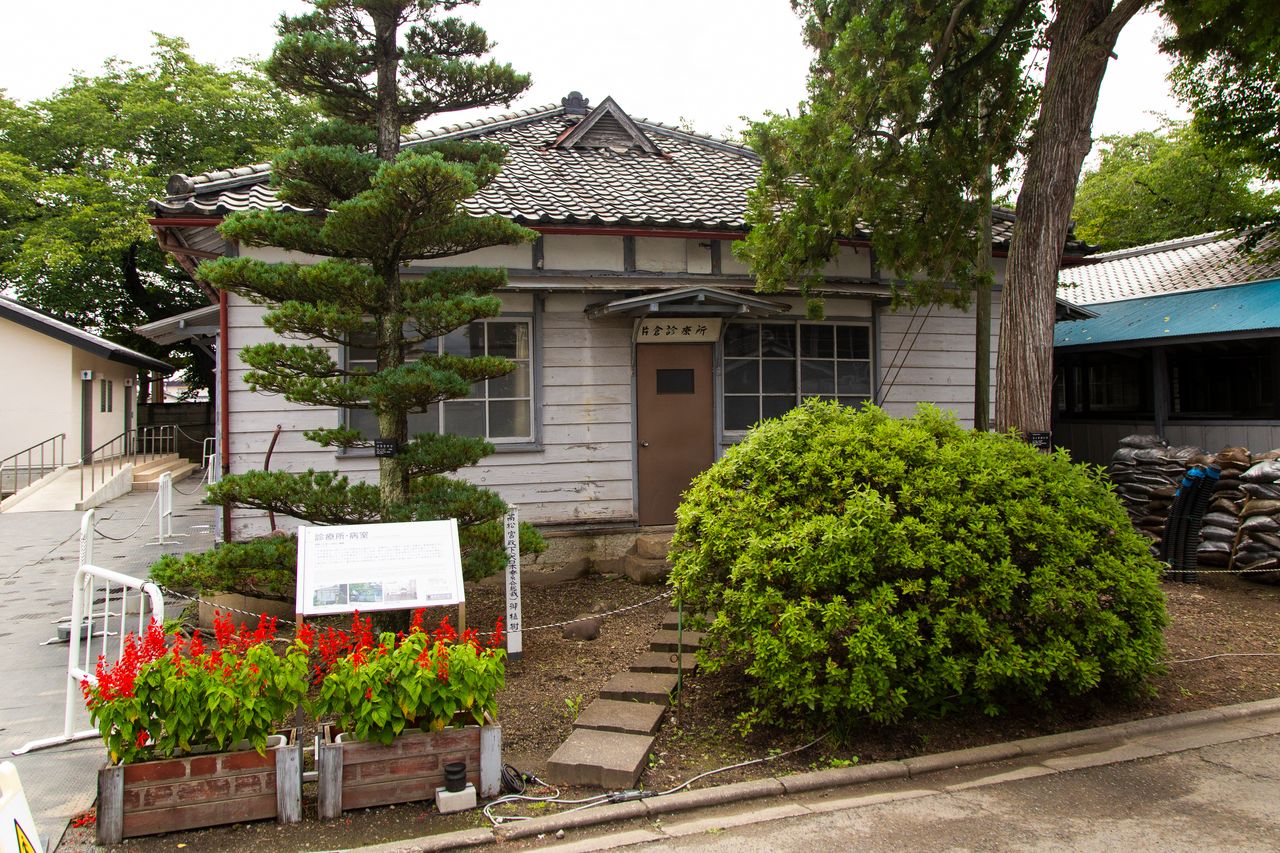 This clinic, also built in 1940, was the third such facility erected since the mill’s opening. 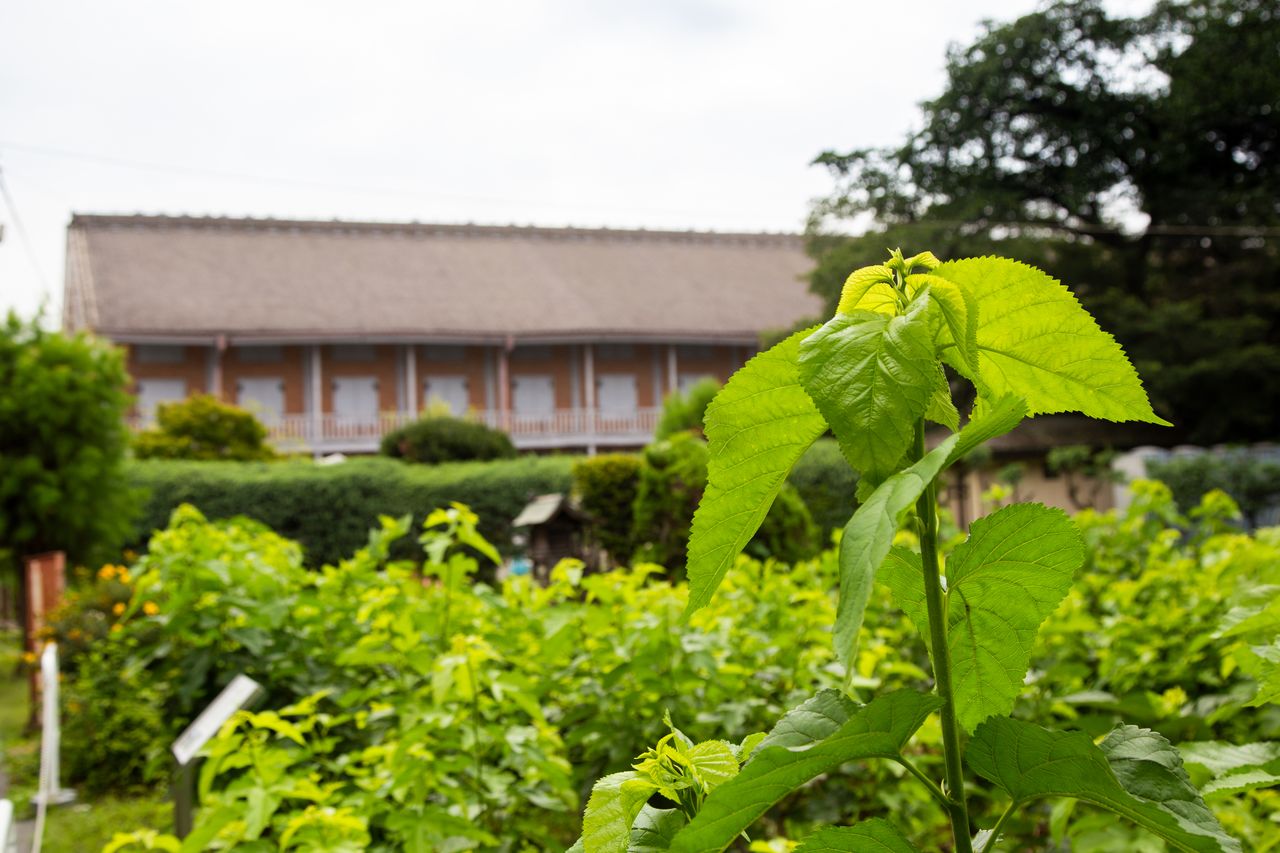 A field of mulberry leaves, on which silkworms feed. 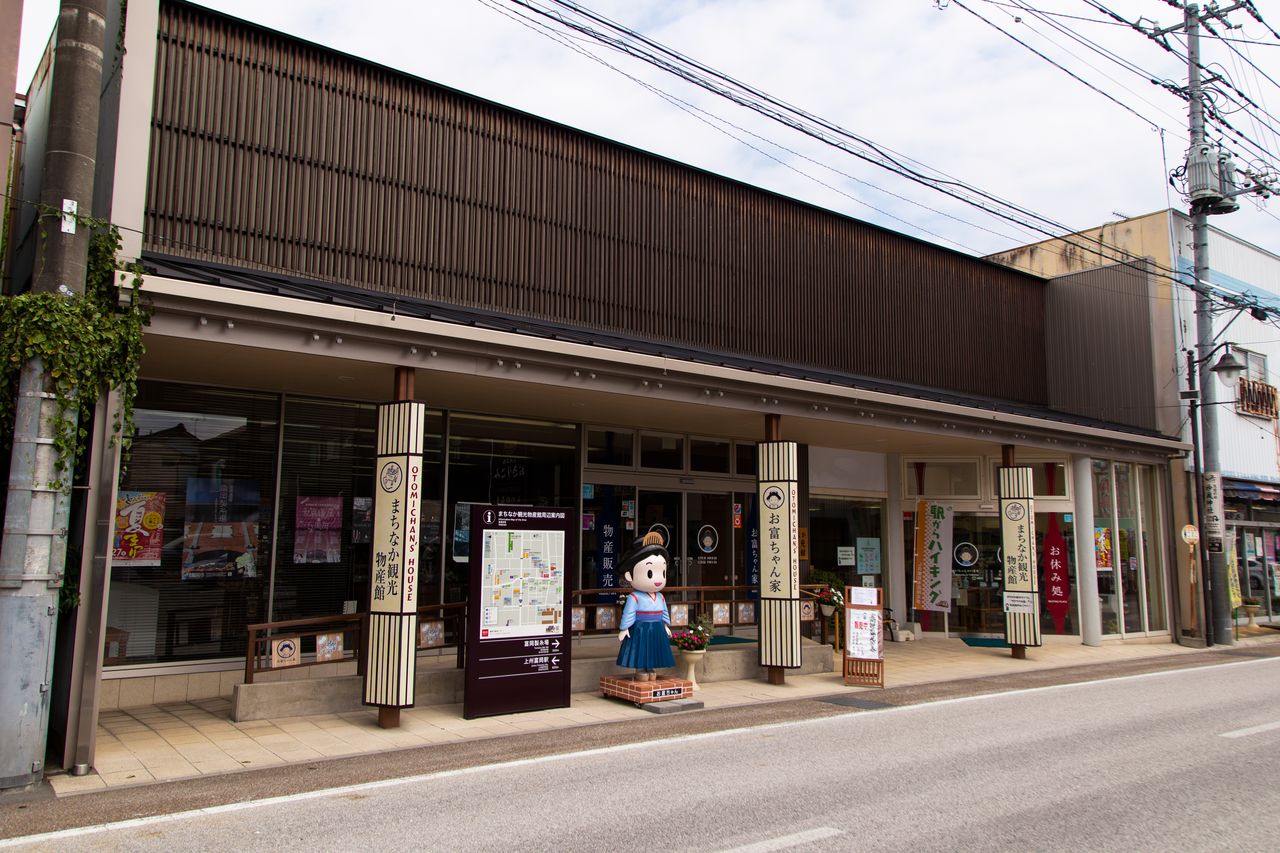