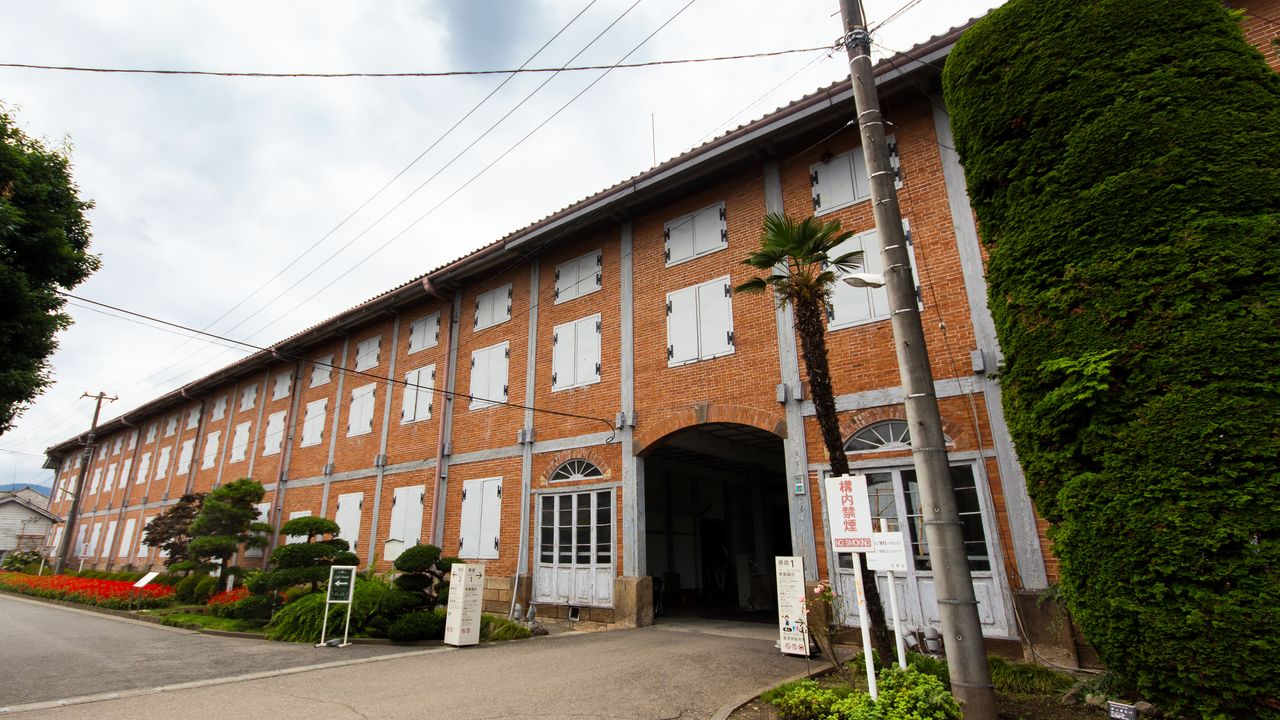 Travel Oct 31, 2019
Registered as a UNESCO World Heritage site in 2014, the Tomioka Silk Mill in Tomioka, Gunma Prefecture, was Japan’s first large-scale, Western-style silk-reeling factory. From its initial conceptualization in 1870 to its operation and conservation, the Tomioka Silk Mill offers a fascinating perspective on Japan’s history of modernization.

On first glance, the Tomioka Silk Mill appears to be a cluster of Western-style red-brick buildings. The roofs are covered with traditional Japanese tiles, though, and the bricks have been laid with Japanese shikkui lime plaster rather than mortar. The buildings were designed by a Frenchman but constructed by Japanese workers and carpenters using domestic materials and technology. 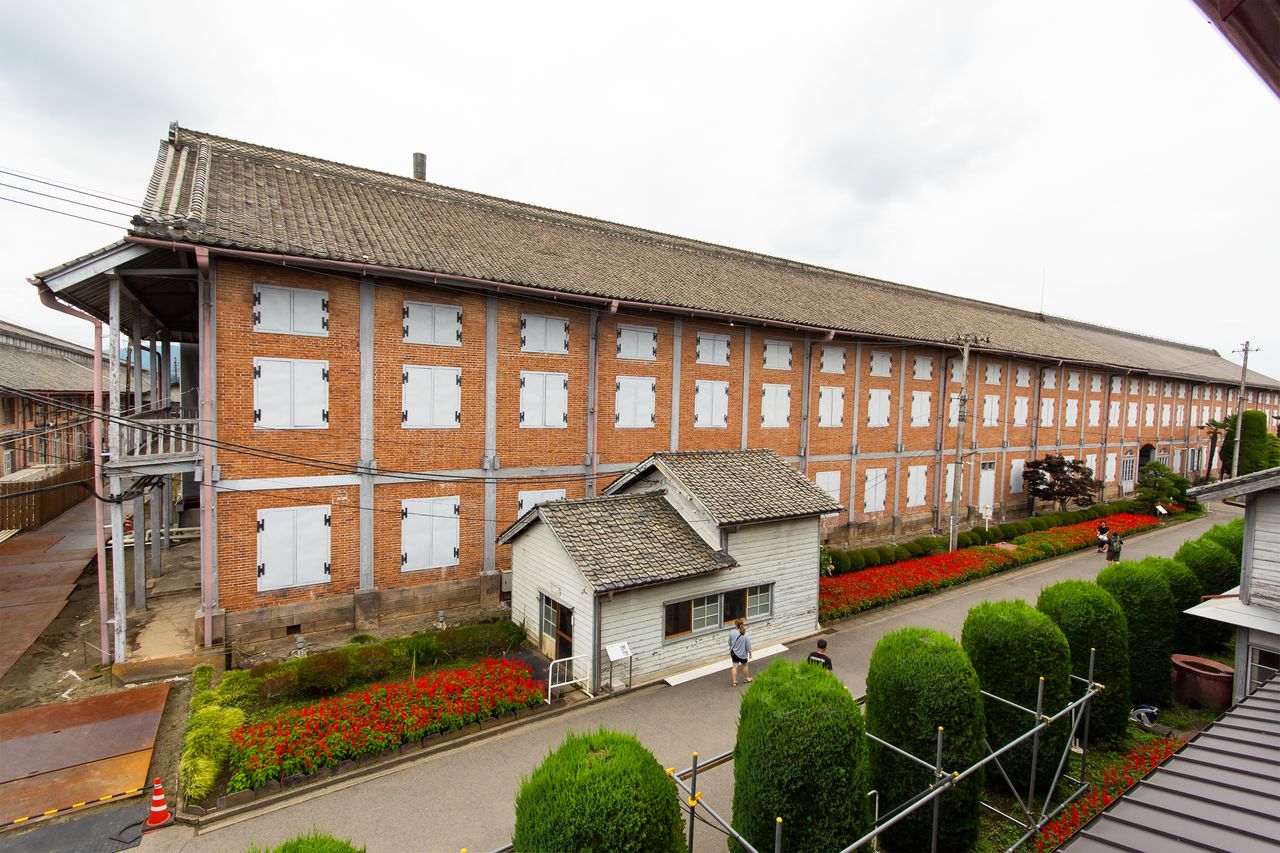 The tiled roof of the East Cocoon Warehouse viewed from the second floor of the dormitory for French silk-reeling instructors. 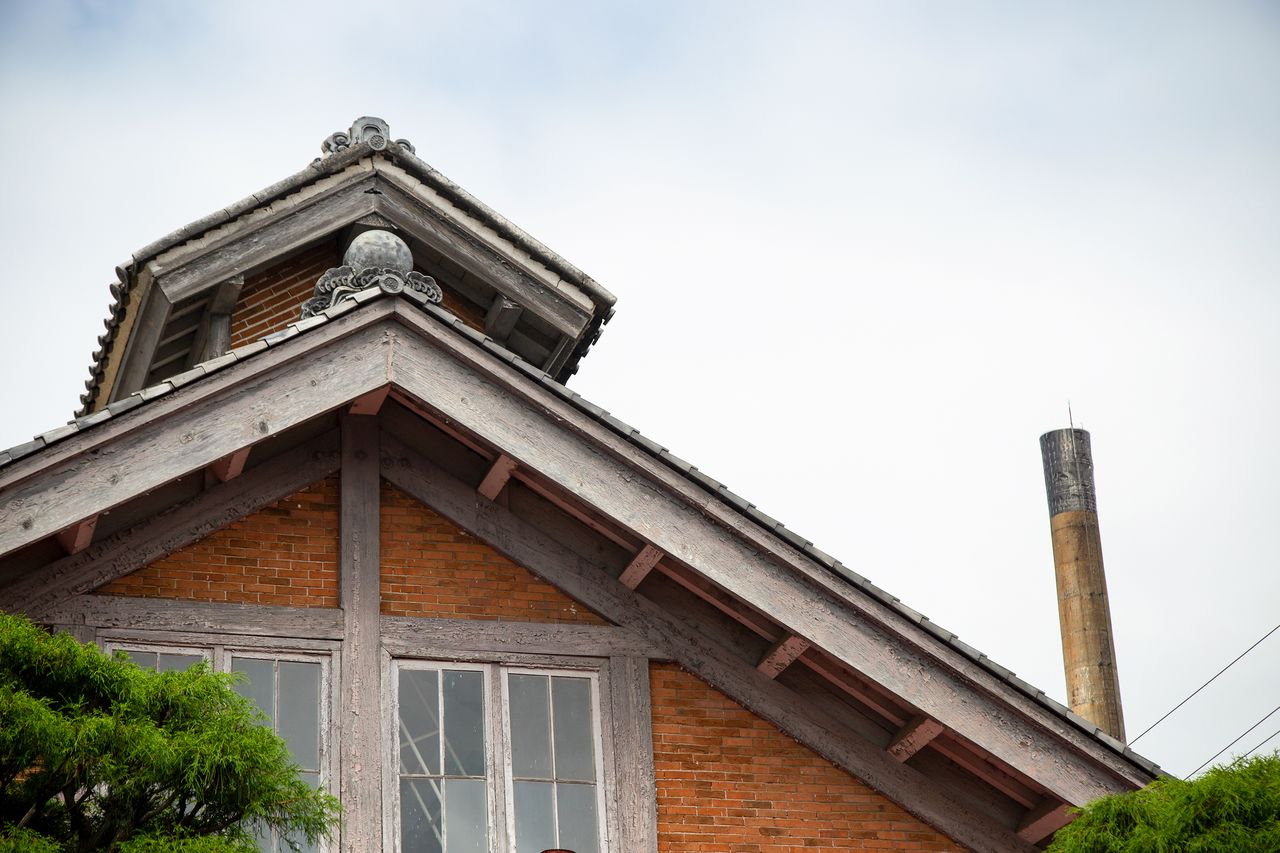 The roof peak on the silk-reeling plant is embellished with a decorative tile endpiece depicting the sun rising above waves.

When Japan opened its doors to the world at the end of the Edo period in the late nineteenth century, raw silk was its primary export product. Demand soared, but the poor quality of much of the silk also triggered numerous complaints from importing countries. Eager to build up its foreign currency reserves, the new Meiji government made improving the production processes and quality of Japan’s silk a priority national project, and in February 1870 decided to build a government-owned model factory installed with Western-style silk-reeling machinery.

The project was overseen by Shibusawa Eiichi, at the time a bureaucrat in the Ministry of Finance. Shibusawa was born into an affluent family in what is today the city of Fukaya in Saitama Prefecture. His family was engaged in sericulture, and Shibusawa’s knowledge of the industry and raw silk in general, as well as his experience travelling to Europe, made him the ideal choice to head the government project.

Paul Brunat, an inspector at a silk-trading company in Yokohama, was hired to give technical direction, and Odaka Junchū, Shibusawa’s cousin and a bureaucrat in the Ministry of Civil Affairs, joined Brunat in selecting a site for the proposed silk factory. Odaka would later become the first manager of the Tomioka Silk Mill. 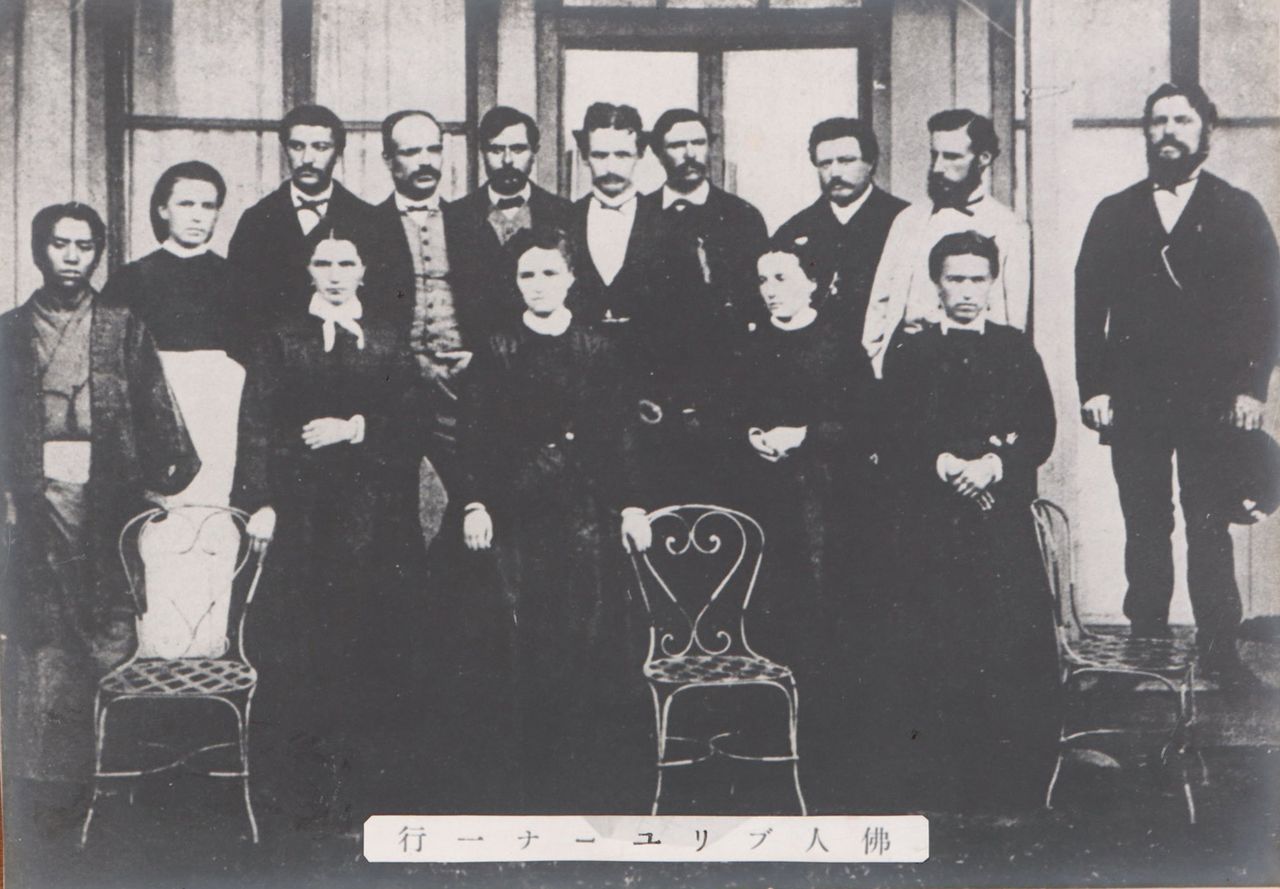 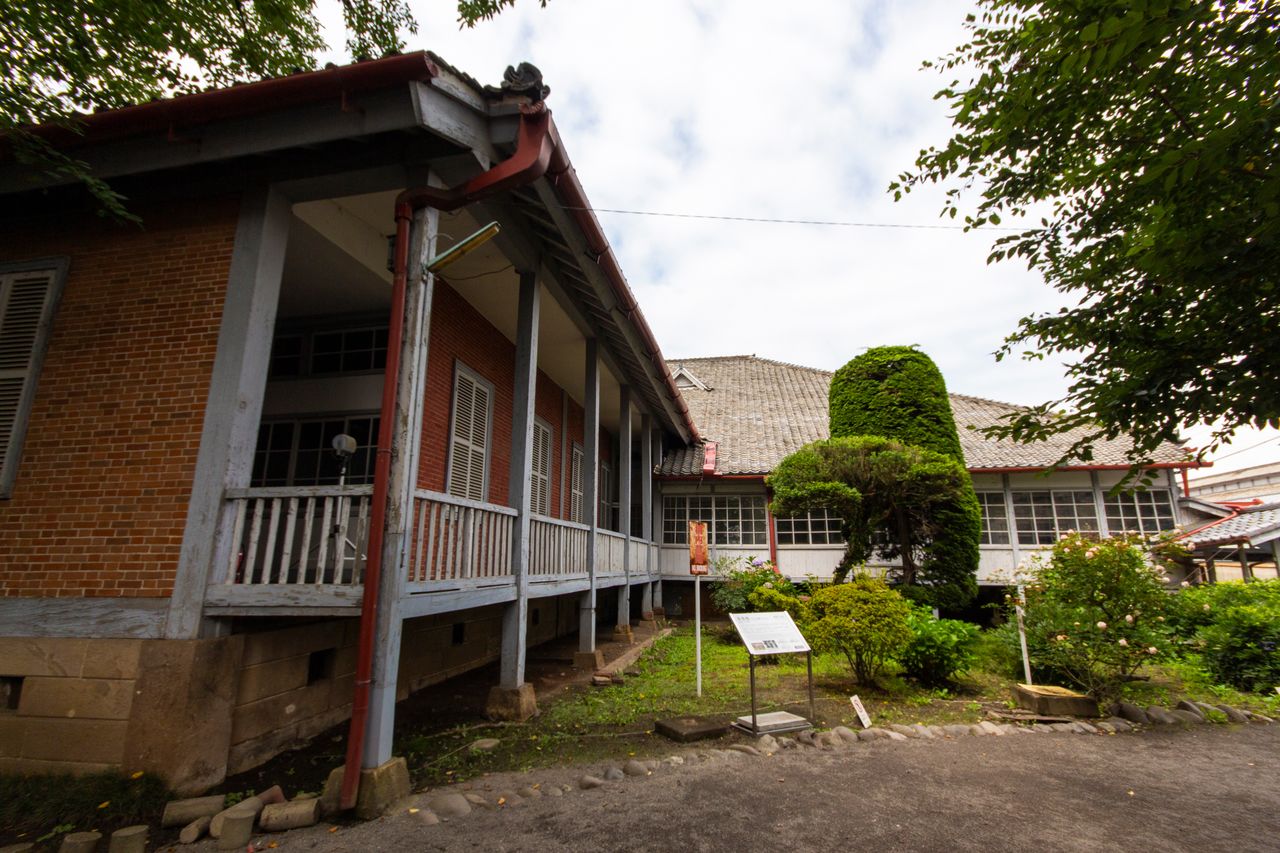 The director’s residence built for Brunat. Also known as the Brunat House.

Shibusawa participated in his family’s business from as early as his late teens, travelling from Saitama Prefecture to neighboring Gunma and even distant Nagano to purchase balls of indigo for dyeing. Odaka often accompanied Shibusawa on these trips, and his familiarity with the region proved useful later in selecting a site for the government’s silk mill. Sericulture was already a major industry in Tomioka, and the proximity of the Takasaki coal mines provided a convenient source of fuel for the proposed mill. 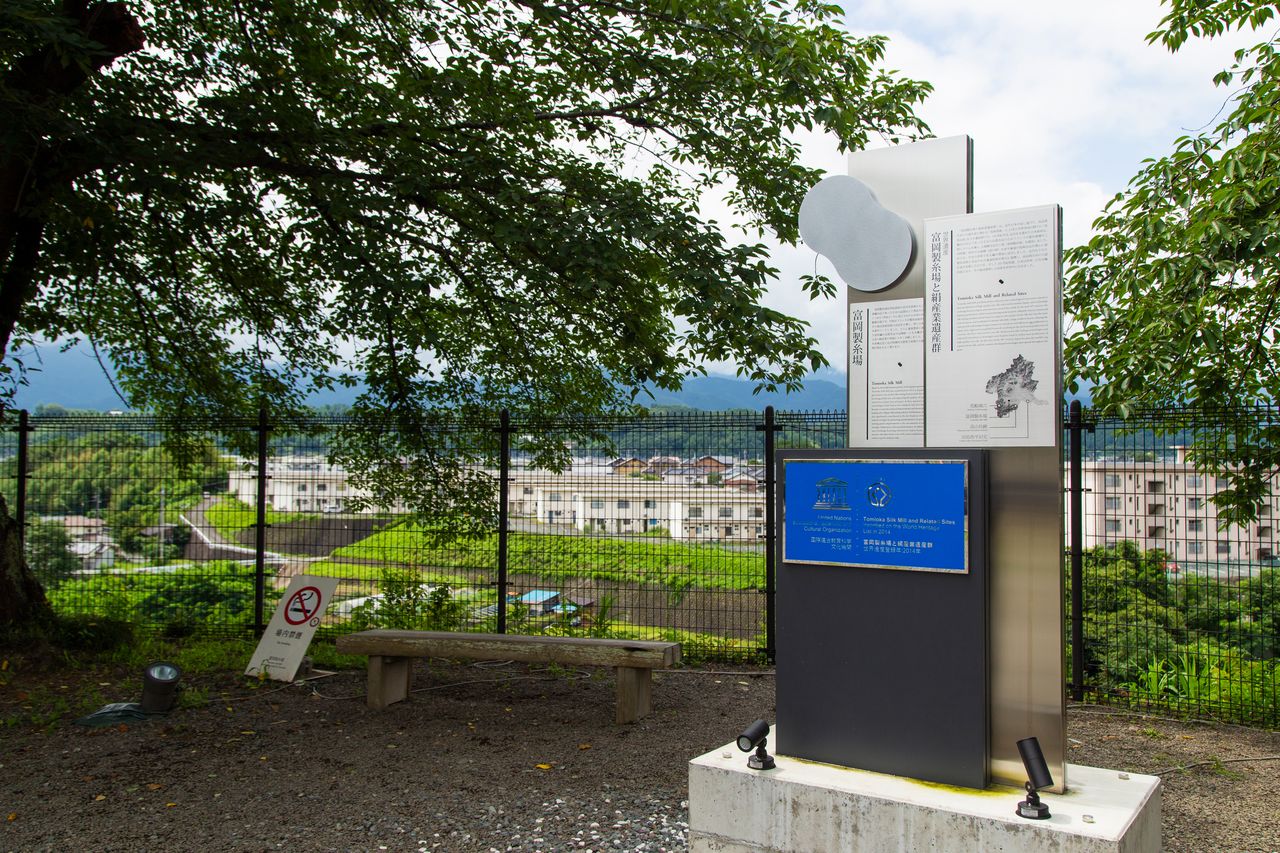 World Heritage monument in the back yard of the Brunat House. Beyond the fence is the Kabura River, the source of water needed to operate the mill.

The new silk mill was designed by Edmond Auguste Bastien, who had just recently been working on the construction of the Yokosuka Ironworks. He applied the same construction method, timber framing with brick infill, that had been used for the ironworks. This apparently allowed him to complete his blueprints for the silk mill in just 50 days.

There was some difficulty in securing the required building materials. Glass windowpanes and hinges were imported from France, but the bricks and mortar had to be procured locally.

Odaka assigned Nirazuka Naojirō, a local roof tile maker, the task of procuring building supplies. Nirazuka was the son of a man who had once worked for Odaka’s parents, and the two had known each other since childhood. Nirazuka brought in roof tile makers from Fukaya and the region around Tomioka to make the unfamiliar bricks in a process of trial-and-error under the guidance of Brunat and Bastien. 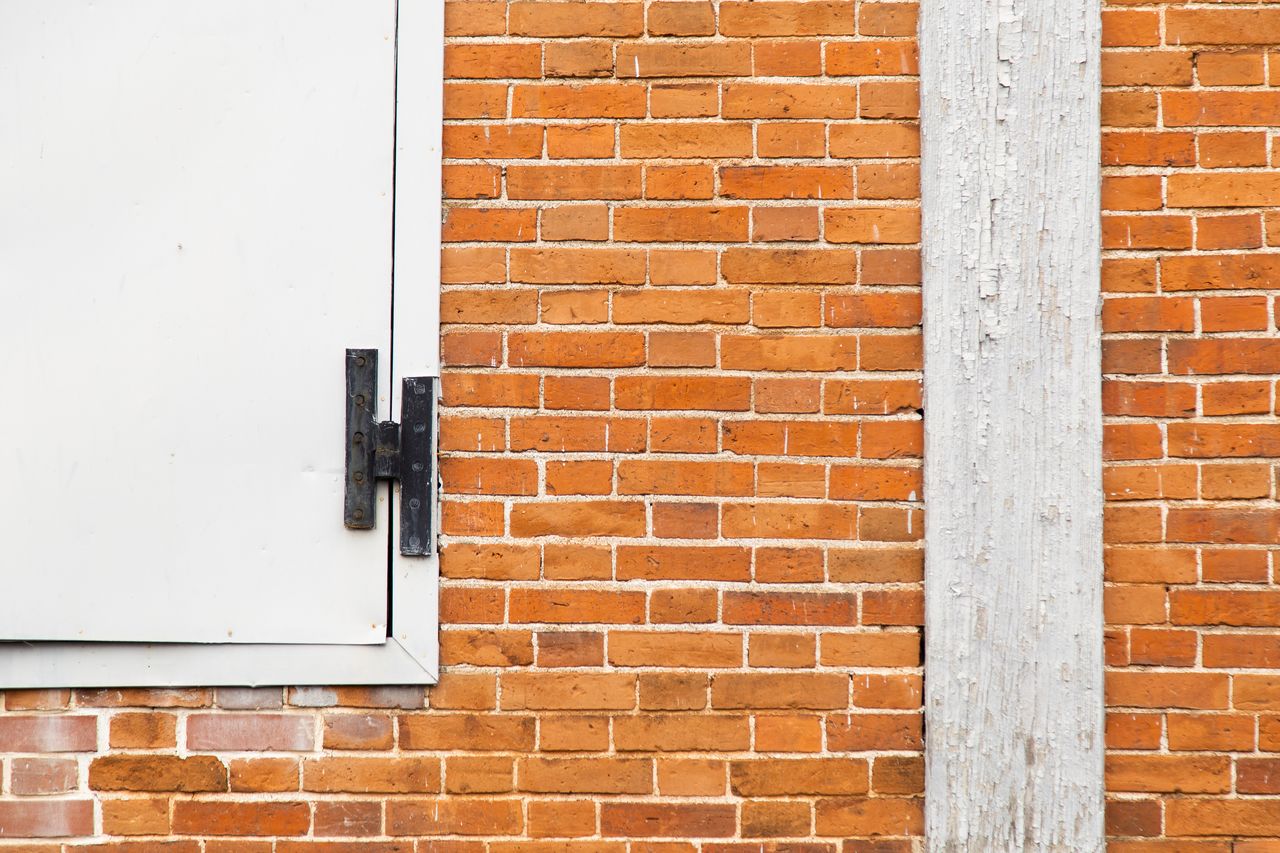 Bricks are laid between wooden posts and beams in a style known as timber framing. 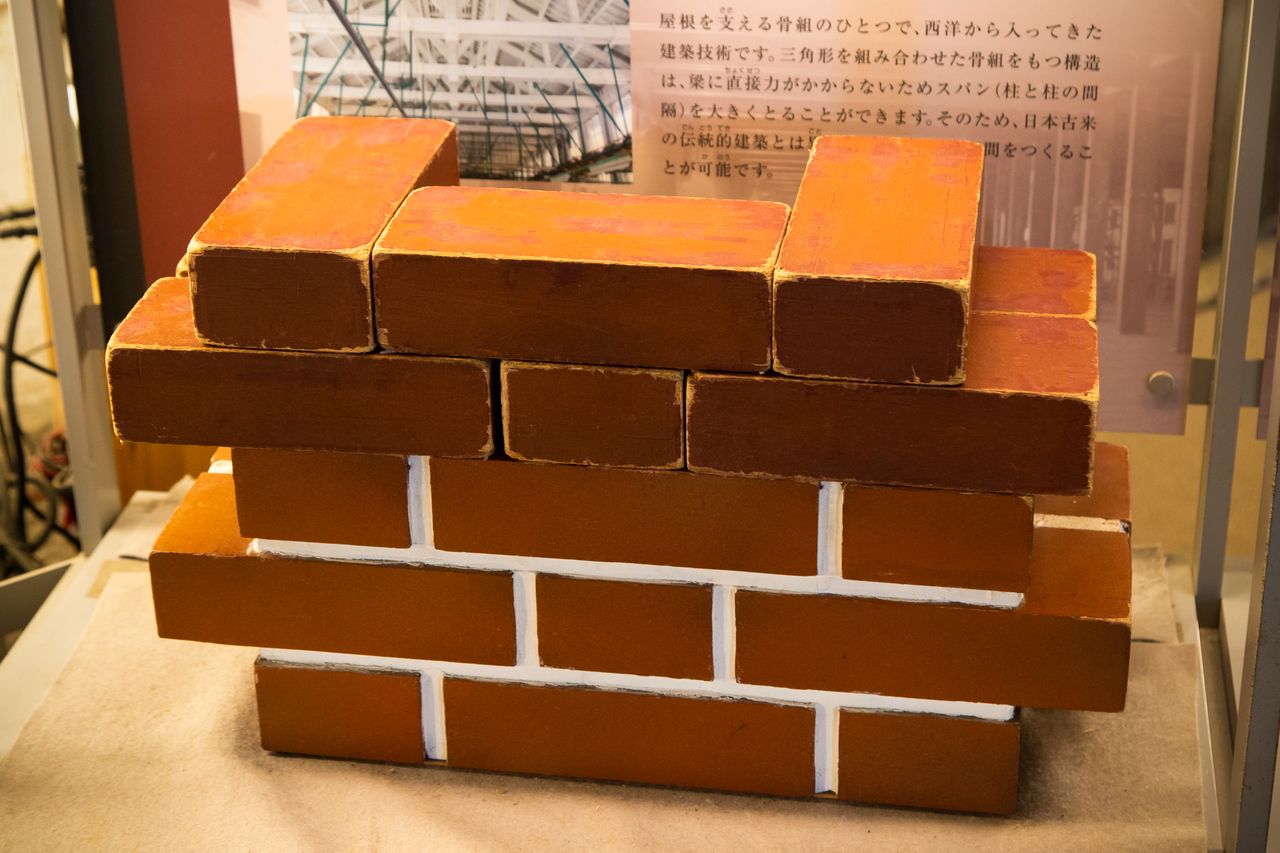 The bricks were staggered in a bricklaying style known as French bond, or Flemish bond.

Construction began in March 1871. By July of the following year the major buildings had been completed: two 100-meter long cocoon warehouses and a large silk-reeling plant equipped with 300 French reeling machines. The largest mill in the world at the time was thus completed in just two and a half years from the time the Japanese government decided to launch the project—and only 16 months after ground was broken for construction—thanks to the leadership of Shibusawa and his two Fukaya cohorts.

The Tomioka Silk Mill experiment would prove extremely useful. In the latter half of the 1880s, the Meiji government launched another project to create a district of government buildings in Hibiya, Tokyo. To meet the demand for building materials, Shibusawa established the Nippon Renga Seizō Kaisha (the Japan Brick Company) in Fukaya, while Nirazuka worked to secure the support of the local people for the new industry. Fukaya brick was used to build a number of modern Western-style government and public buildings, among them what is known today as the Old Ministry of Justice Building, Tokyo Station, and the Akasaka Palace (now the State Guest House). Shibusawa and Nirazuka made good use of their experience building the Tomioka Silk Mill to introduce a new industry to their hometown of Fukaya, which soon became known as the Brick Town. 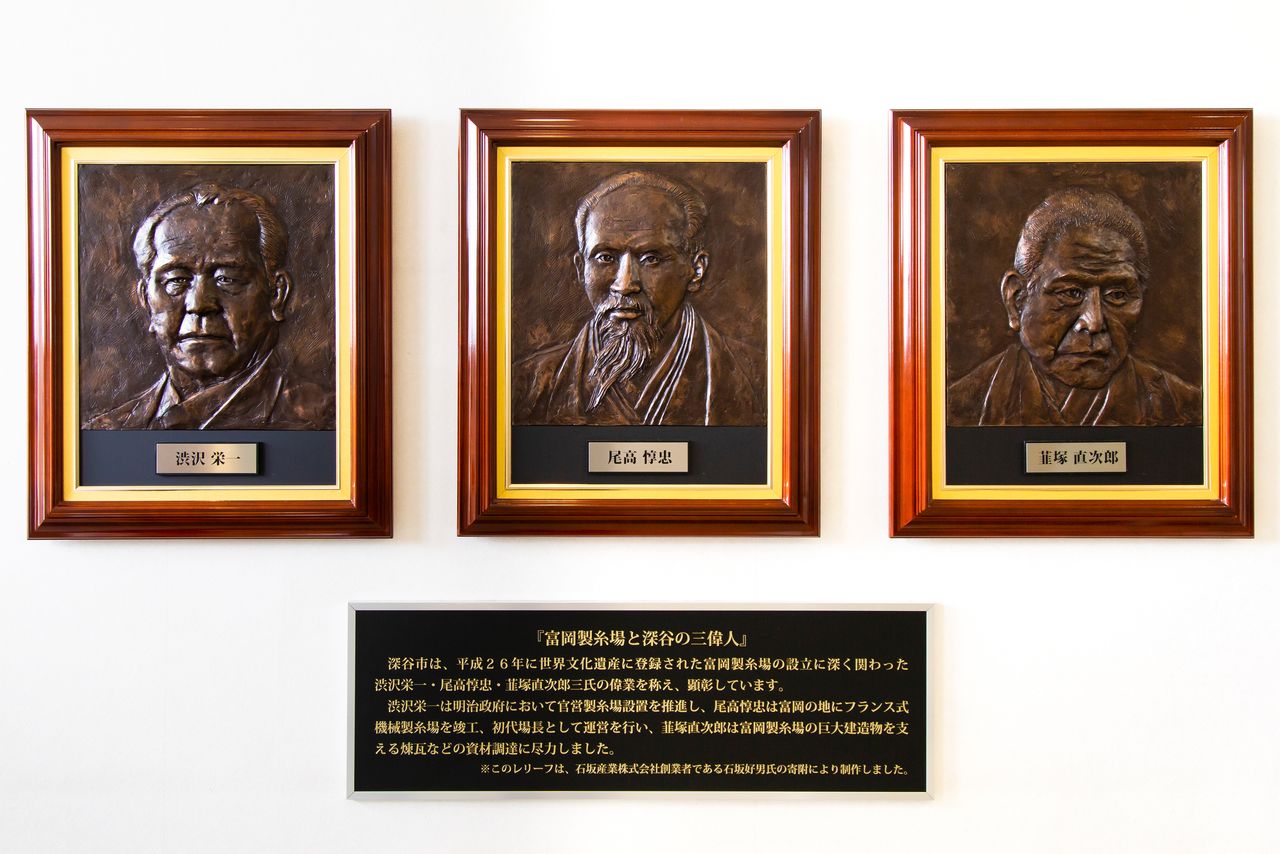 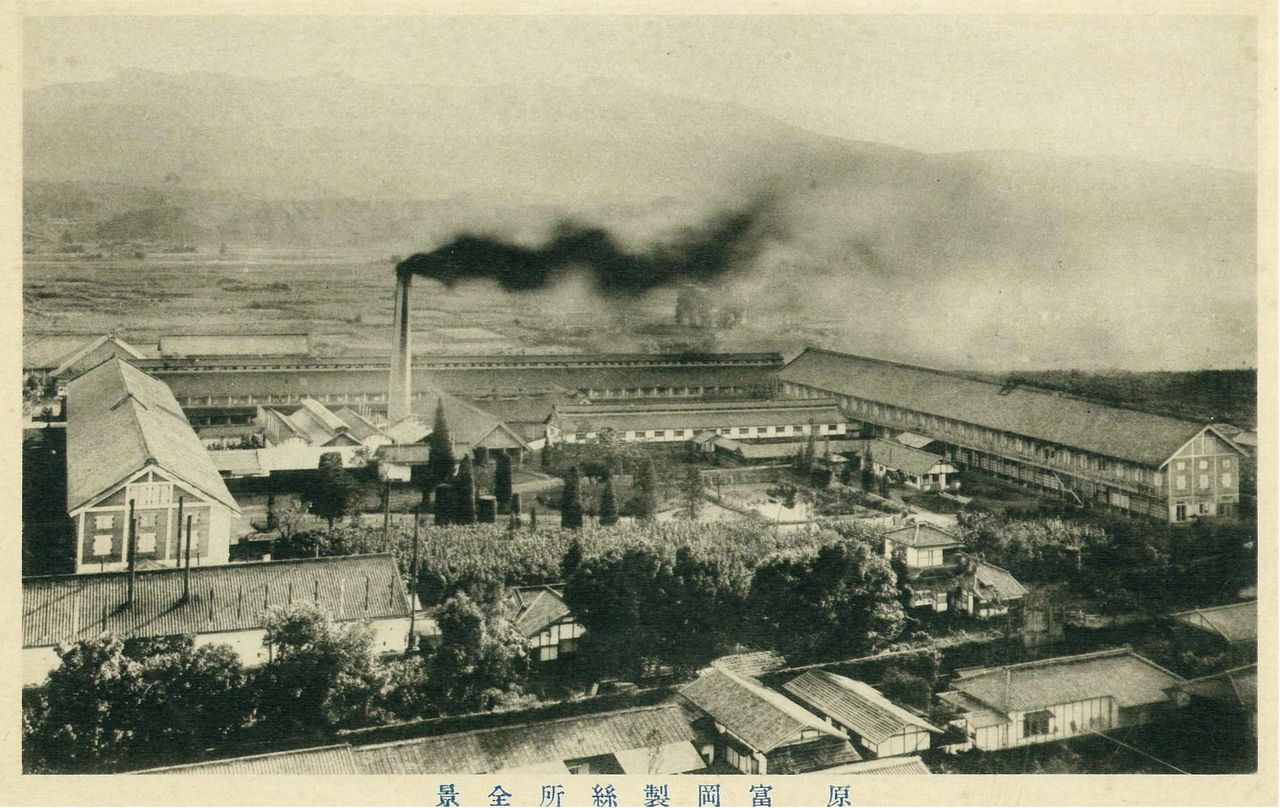 An Opportunity for Elite Women Workers

At last the buildings were completed, but there were no workers, and operation of the new mill did not start until October 1872.

After centuries of isolation, the Japanese people feared the foreigners and their imagination ran wild. Watching Brunat and his companions drink red wine, they whispered of the Westerners who drank fresh blood. It was Odaka Junchū’s daughter Yū who saved the day by volunteering to become the first worker at the new mill. This helped to dispel the rumors. If the factory manager’s daughter could work with the foreigners, so could others. The number of applicants suddenly soared.

Reports and novels of the later Taishō era (1912–26) would portray the life of a mill worker as something akin to forced labor. But the mission of the government-owned and -operated Tomioka Silk Mill was to introduce the latest Western technology and train workers who would later become teachers at other mills around the country. This educational aspect attracted female workers from samurai and other prestigious families around the country. Some, it is said, even came from the nobility. The local people referred to the mill workers as “silk princesses.”

The Tomioka Silk Mill was the first in Japan to introduce the concept of the work week, with Sundays off. Night work was prohibited, and the focus was on providing an environment for training. Employee welfare was another novel concept introduced at the mill, which had a free medical clinic on site. One of the trainees employed soon after the mill opened later wrote about her experience in the Tomioka Diary, a lively account of learning new Western technology and enjoyable interaction with the French instructors. Far from the tragic image of a place of conscripted labor, the Tomioka Silk Mill was in fact a very attractive workplace for the young Japanese women of the day. 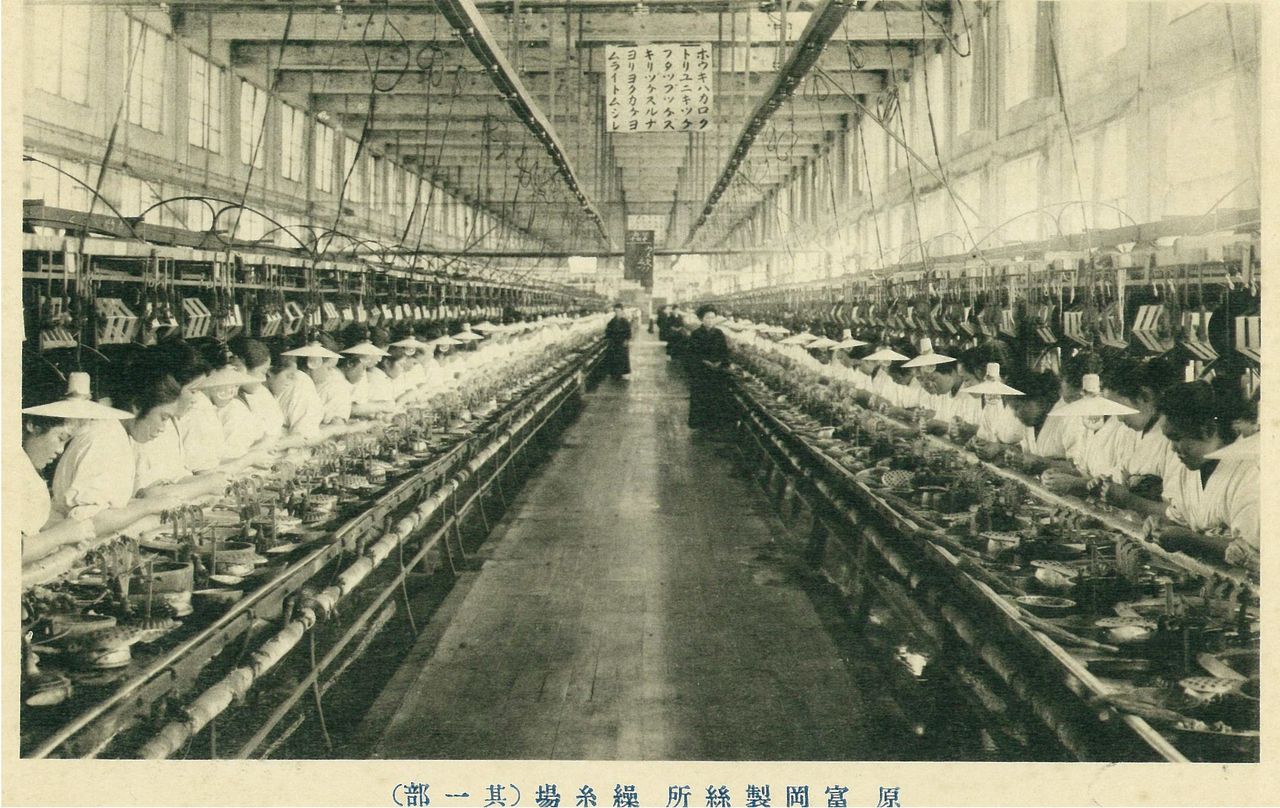 Brunat and the other foreigners who had been involved with the mill since its inception left in 1876, its fourth year of operation. Thereafter, the government mill was operated solely by Japanese personnel. Product quality was valued above all else, and some years there were no profits, but the Tomioka Silk Mill succeeded in its original purpose—to enhance the global reputation of Japanese raw silk. Similar machine-reel mills emerged in other parts of the country, where they were staffed by young women who returned to their hometowns after being trained at Tomioka.

Having achieved its original purpose, the Tomioka Silk Mill was sold by the government to the Mitsui family in 1893 after which it was passed on to the Hara Company in 1902. In 1939, it was merged with the Katakura Silk Spinning Co. (now Katakura Industries), at the time the largest manufacturer of raw silk in Japan. For more than a century, the Tomioka Silk Mill remained at the forefront of the industry, introducing new machinery as needed and continuing operations until 1987.

Until it donated the mill to the city of Tomioka in 2005, Katakura Industries spent large sums to preserve the Tomioka Silk Mill as a symbol of Japan’s modernization, vowing never to sell, lend, or destroy the historical buildings. In June 2014, the Tomioka Silk Mill and Related Sites were granted UNESCO World Heritage listing. 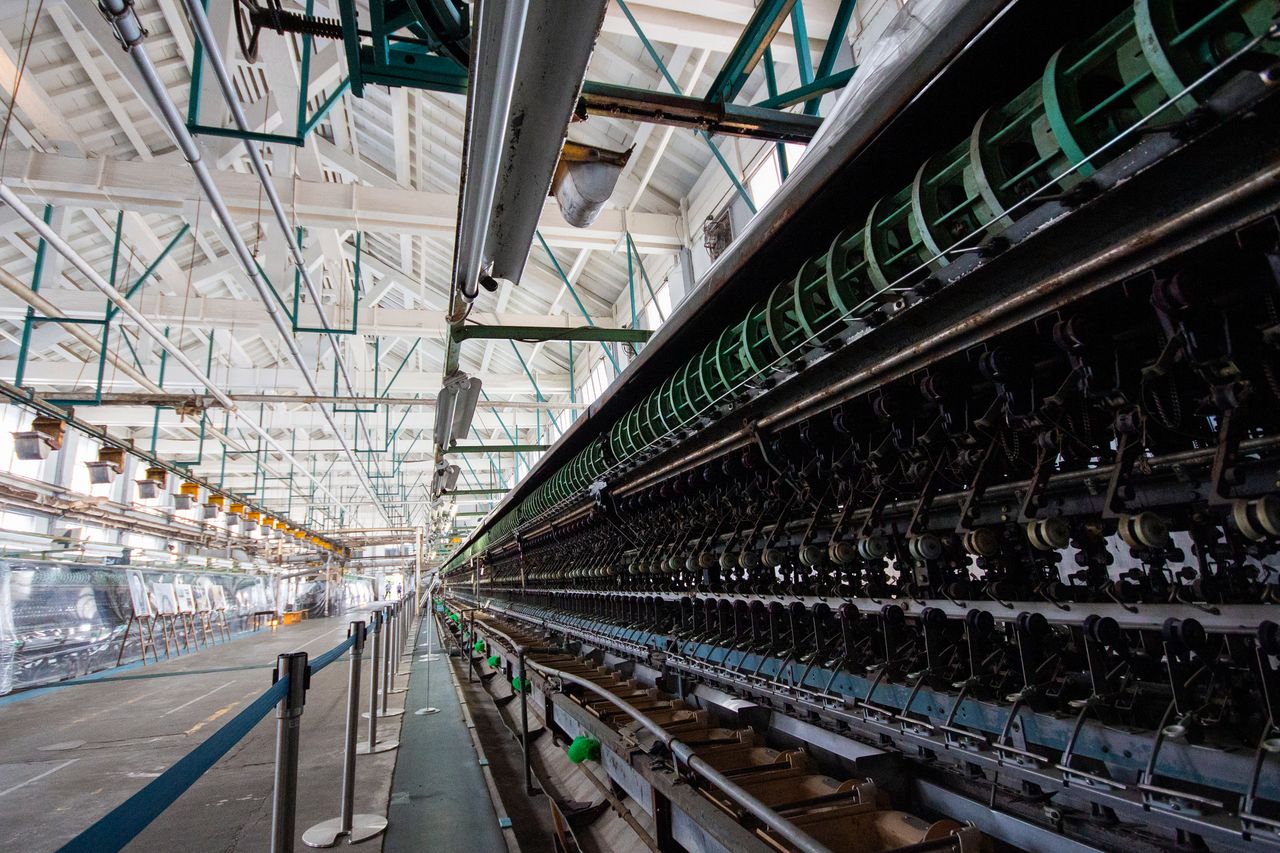 The automatic silk-reeling machines that can be seen in the silk reeling plant were made by Nissan Motor and installed around 1966, when the mill was operated by Katakura Industries. 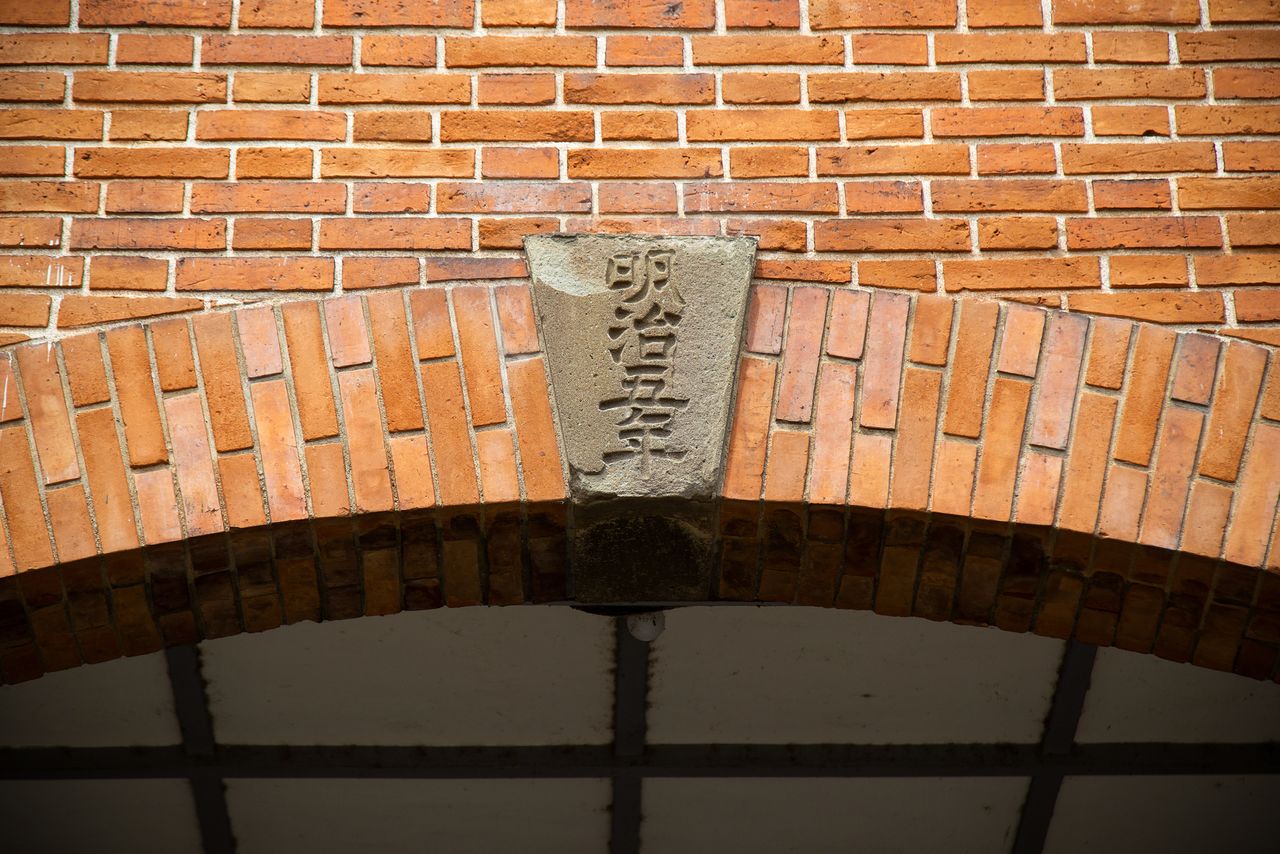 The keystone on the East Cocoon Warehouse is engraved with the characters for “Meiji 5” (1872), the year the building was completed.