Culture Oct 23, 2017
Meiji-era entrepreneur and business leader Shibusawa Eiichi established and helped run over 500 banks and commercial enterprises during his lifetime, earning the reputation as the “father of Japanese capitalism.” But he also believed that morality and economic activity were inseparable and that public interest should come before profits. Using this doctrine, he was involved with some 600 social welfare organizations. The Shibusawa Eiichi Memorial Museum in Tokyo tells the story of the influential industrialist and philanthropist.

Capitalism of the Heart

Prominent Meiji-era business leader Shibusawa Eiichi (1840–1931) helped lay the foundation of Japan’s modern corporate and financial might, coming to be known as the “father of Japanese capitalism.” Far from stressing profits, though, he espoused a doctrine of moral and economic harmony and encouraged commercial enterprises to put the public interest before monetary returns. 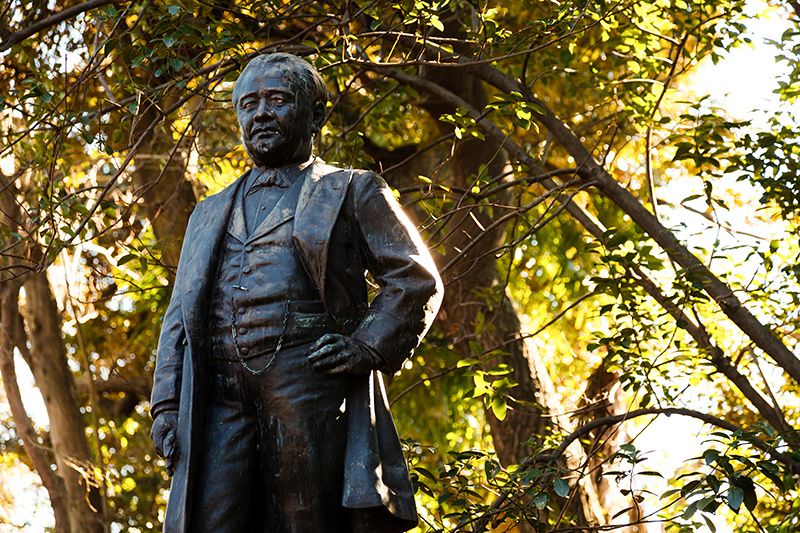 A bronze statue of Shibusawa Eiichi at the site of his former Tokyo residence.

The Shibusawa Eiichi Memorial Museum inside Asukayama Park in northern Tokyo tells the life story of the influential thinker and business leader. The current building, which opened in 1998, stands on the site of Shibusawa’s former elegant Western-style residence, a place where he spent his autumn years. Adjacent to the museum are the century-old Bankōro tea room and Seienbunko library, places where Shibusawa hosted business leaders and influential dignitaries. Both structures are designated important cultural properties. 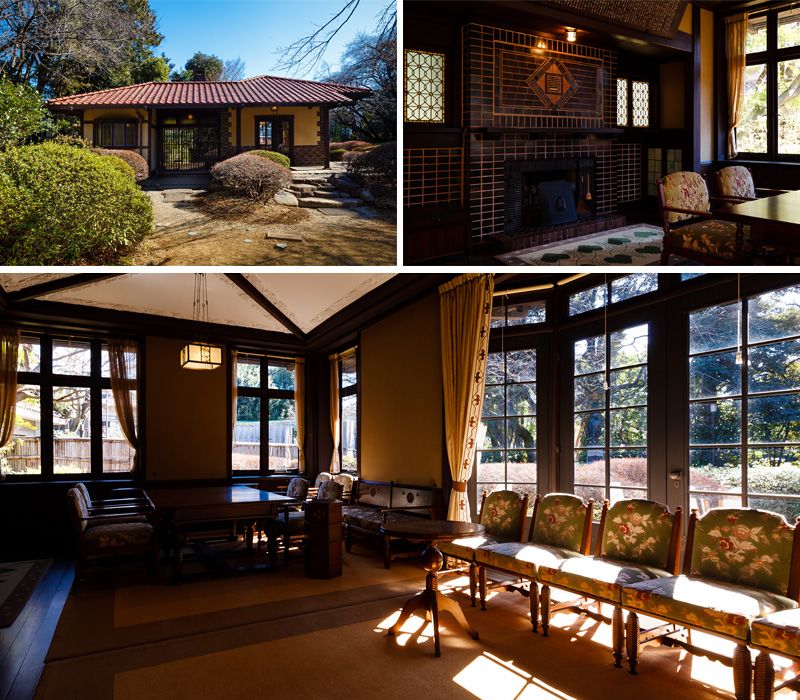 Recently, Shibusawa’s doctrine of prioritizing public interest has enjoyed a revival as many in the corporate world reevaluate the short-term, profit-driven goals that led to the 2008 global financial crisis.

The “Analects” and the Abacus: The Contemporary Relevance of Shibusawa Eiichi’s Business Philosophy 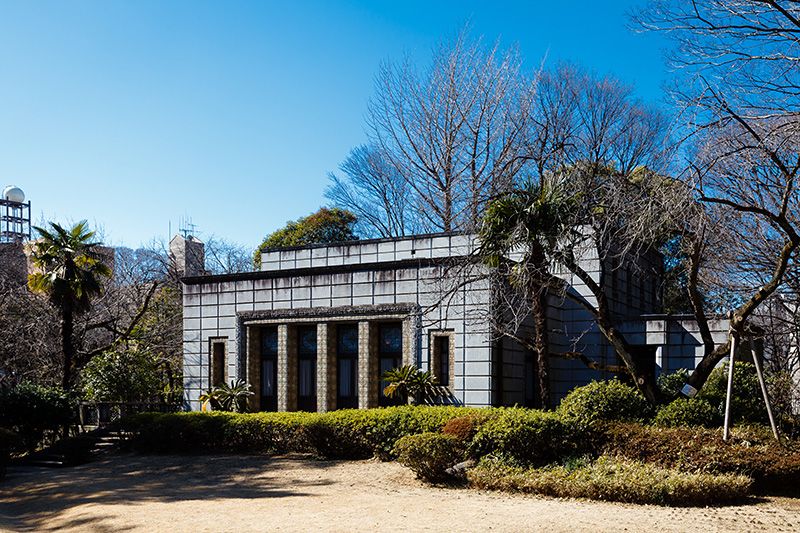 The Seienbunko library built in 1925 features a brick exterior and stained-glass windows.

According to museum director Inoue Jun, there has been a steady uptick in visitors over the last few years, including business executives from neighboring countries such as China, South Korea, and Taiwan. Inoue explains that Shibusawa’s Confucian-influenced ideas have come to garner broad attention across East Asia. “This is particularly true in China where economic growing pains have sparked renewed interest in the Analects of Confucius among the younger generation,” he says, pointing out that a recent Chinese translation of Shibusawa’s Rongo to soroban (The Analects and the Abacus) has been warmly received. He also explains that scholarly interest in Shibusawa is on the rise. “In 2006, Central China Normal University in Wuhan, China, named a research center after Shibusawa, and Missouri State University in the United States created a course covering his life and ideas.” 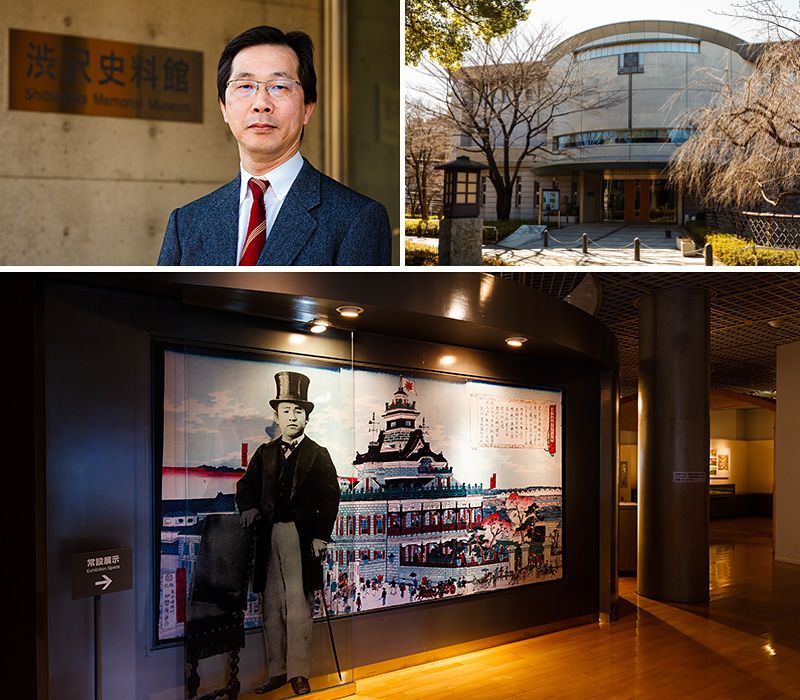 (Clockwise from upper left): Director of the Shibusawa Eiichi Memorial Museum Inoue Jun; the exterior of the museum; a display at the museum’s front entrance.

Shibusawa was born on February 13, 1840, the eldest son of an affluent family in the village of Chiaraijima, now part of Fukaya, Saitama Prefecture. He developed an eye for business early on helping with the family’s farm and indigo business. He began studying history and the Chinese classics at age seven under the tutelage of his cousin Odaka Junchū, who later headed the Tomioka Silk Mill, a pioneering modern factory that Shibusawa helped establish. In his early twenties he traveled to Edo, now Tokyo, between growing seasons, studying at various schools, including that of prominent Confucian scholar Kaiho Gyoson and Genbukan, an influential swordsmanship academy run by Chiba Michisaburō. 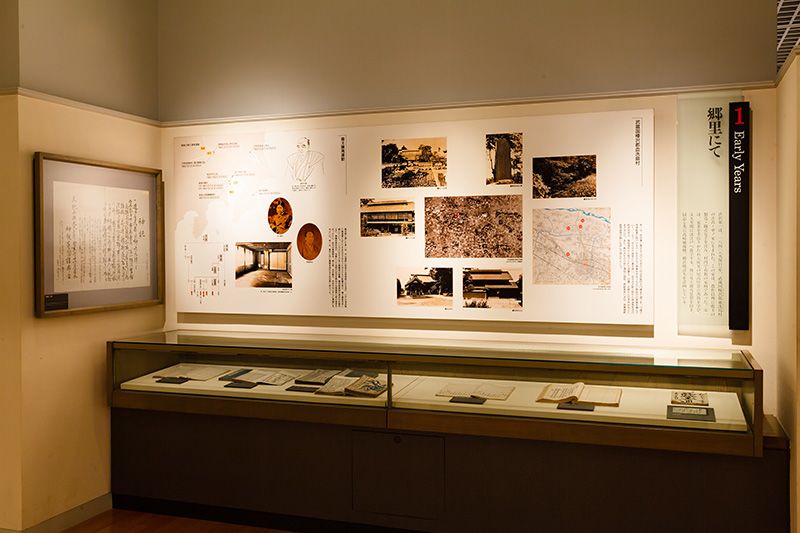 As a youth Shibusawa was heavily influenced by anti-foreign principles embodied in the slogan sonnō jōi (revere the emperor, expel the barbarians) and had ties through Odaka to extremist groups that plotted to capture Takasaki Castle and burn Yokohama. Although neither plan came to fruition, Shibusawa, fearing for his safety, fled to Kyoto. While in the ancient capital, through a family connection, he became a retainer of Hitotsubashi (Tokugawa) Yoshinobu (1837–1913), the eventual final head of the Tokugawa shogunate. It was in this position that Shibusawa began to forge his reputation as a skilled economic thinker. 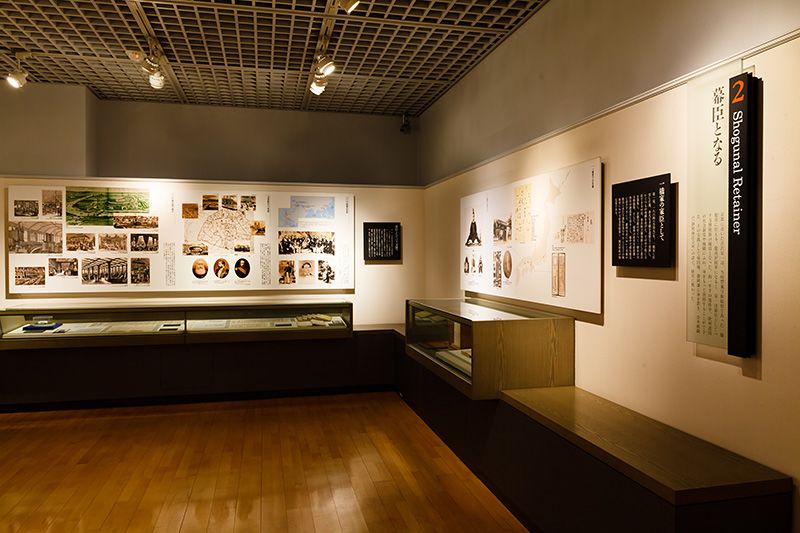 A corner of the museum dedicated to Shibusawa’s time as a shogunal retainer.

In 1867 Shibusawa journeyed to Europe as part of the shogunal delegation led by Yoshinobu’s younger brother Tokugawa Akitake to the Paris World Fair. He did not return to Japan immediately after the exhibition, but instead spent a year and a half traveling the continent, observing firsthand the social and economic systems of leading Western countries. 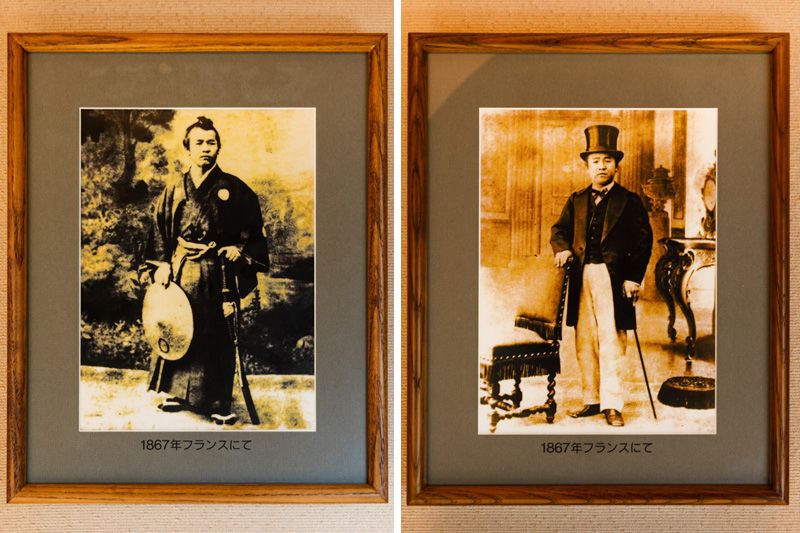 Photos of Shibusawa in France clad in traditional Japanese and Western attire.

Following his return, Shibusawa, still in the service of Yoshinobu, went with the Tokugawa clan when it was relocated to the Shizuoka domain at the start of the Meiji era (1868–1912). Using what he had learned in his overseas travels, he founded one of Japan’s first joint-stock companies, Shōhō Kaisho. His business acumen quickly caught the eye of the new government, who asked him to join the Ministry of Finance. He went on to hold a number of other high-ranking posts while a bureaucrat, helping lay the legal and administrative groundwork of Japan’s modern corporate and financial systems. 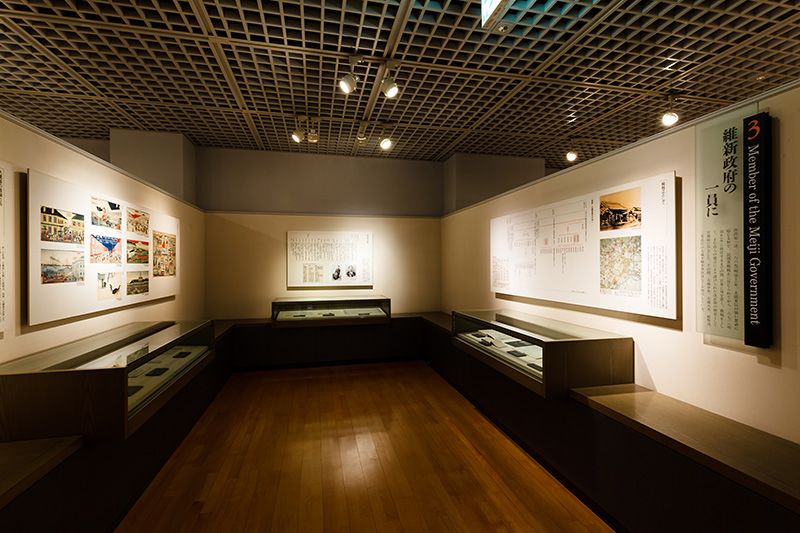 The museum offers a comprehensive look at Shibusawa’s wide-ranging contributions to building the modern Japanese state.

After leaving government in 1873, Shibusawa focused his energy and business know-how into private-sector enterprises. Over his lifetime he founded and helped run roughly 500 companies, largely in the financial sector. One of his most enduring legacies is the establishment of the First National Bank, the forerunner of financial giant Mizuho Bank. 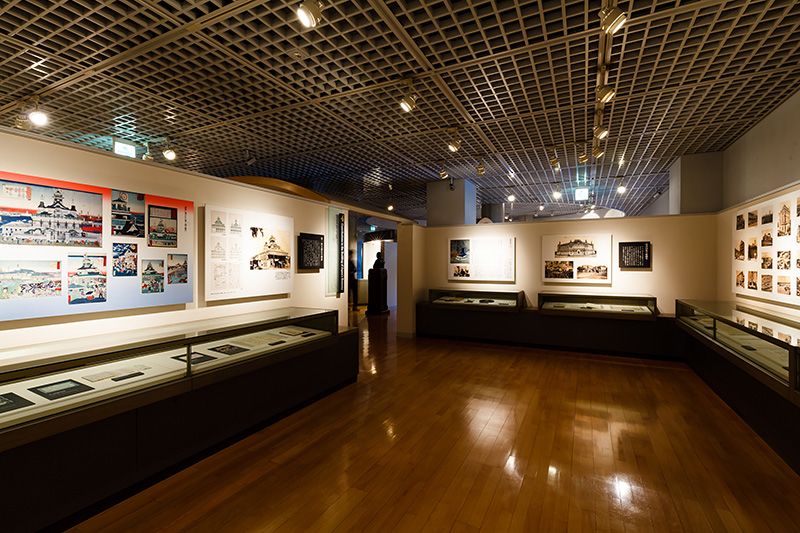 The section “Contributions to the Building of Japan's Economy” outlines Shibusawa’s achievements in the private sector.

While an accomplished entrepreneur, Shibusawa also strongly believed that morality and business were inseparable, and he made immense contributions to bolstering the well-being of society. He was involved in roughly 600 charitable organizations and activities, focusing on education and public welfare, and remained a steadfast philanthropist until his death in 1931 at the age of 91. 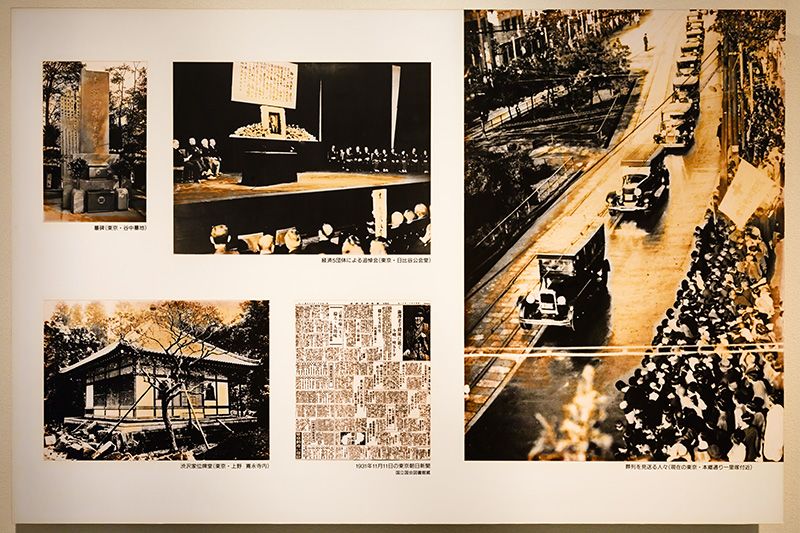 Newspaper accounts of Shibusawa’s death and funeral in 1931.

Shibusawa lived in a time of turbulent change. He began as an advocate of anti-foreign sentiment, but recognizing the momentum of history he came to embrace Western ideas. He joined the new government that overthrew the feudal regime he had once served. Although his switching of allegiance may seem to some as an unprincipled move, Shibusawa was in fact a man of firm convictions. Throughout his life he held an unwavering dedication to serve the public interest, bowing as needed to prevailing circumstances and putting the welfare of society firmly before personal gain. 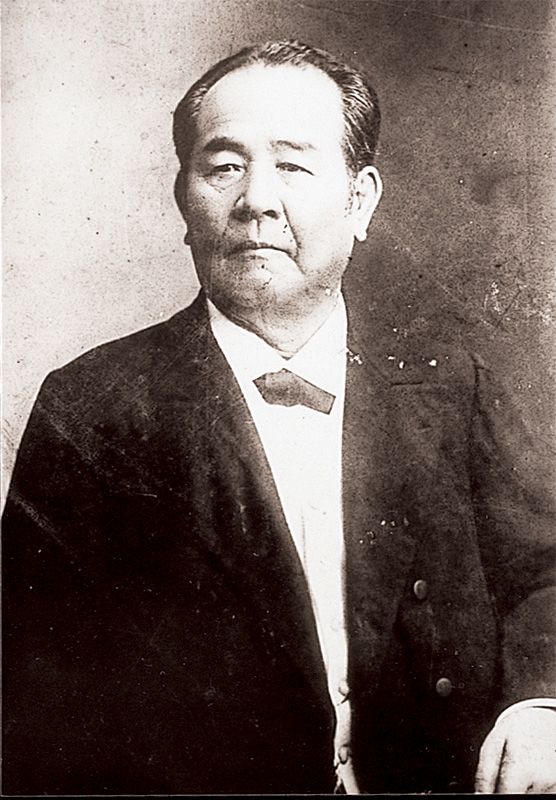 There are countless episodes that illustrate his resolve, but his dedication to his one-time master Yoshinobu in particular stands out. Shibusawa believed that even as the nation moved in a new direction, it was vital to keep a clear record of the past. At personal expense he compiled the biography of the former shōgun, publishing it in 1918 after a quarter century of work. In addition, he tirelessly fought to restore Yoshinobu’s prestige, and at Shibusawa’s urging the Meiji government in 1902 beckoned Yoshinobu from exile and made him a duke.

Inoue describes the significance of Shibusawa’s biography: “The work was not only a story of Yoshinobu, but of the tumultuous period leading up to and directly following the Meiji Restoration. Shibusawa was not immune to the changes that were taking place at the time, but he remained loyal at heart. I think the vast time and resources he spent collecting and sifting through mountains of documents is testament to the firmness of his thoughts and convictions.” 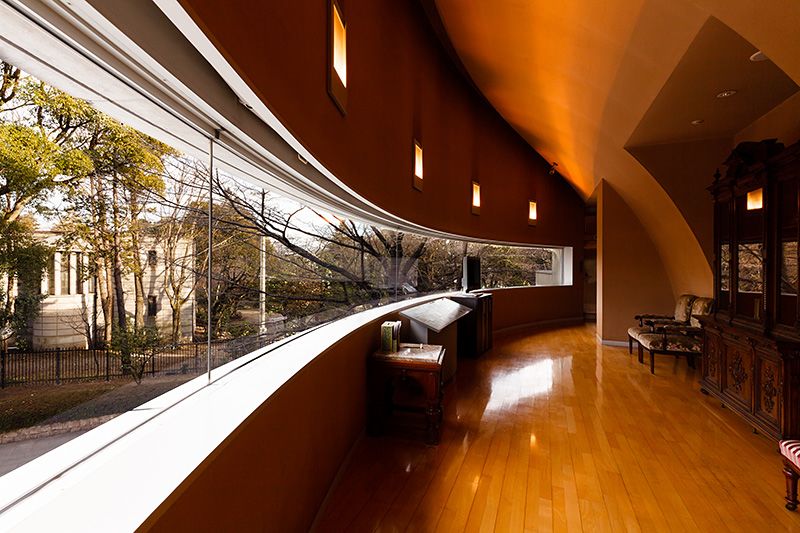 The museum’s rest area looks out onto the Seienbunko library on the grounds of Shibusawa’s former garden.

Shibusawa’s legacy of promoting public welfare is best showcased by his involvement at Tokyo Yōikuin, a facility that supported orphans, elderly, and the disabled. He first became involved with the institute in 1874, helping improve operations before taking over as director in 1876. He went on to hold the post for more than half a century until his death.

“His long tenure as director of Tokyo Yōikuin greatly influenced Shibusawa,” says Inoue. “Early in his career he believed that a strengthened Japanese economy would raise all boats. But in reality it had the opposite effect. Disparity increased, and as more people were left behind the need for social welfare projects grew. Shibusawa saw the darker side of private enterprise firsthand, and it stirred him to support social initiatives. While he is known for promoting capitalism, he didn’t call it that, preferring to use the term collectivism.” 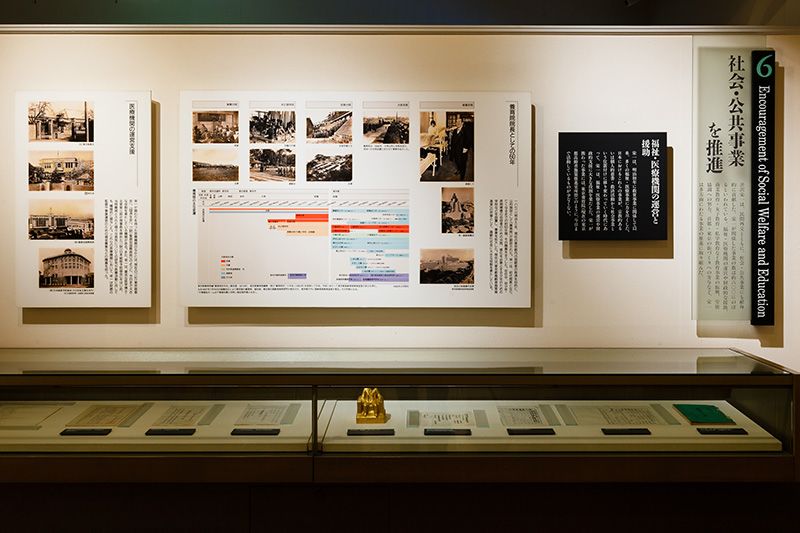 A display detailing Shibusawa’s broad health and social welfare activities, centering on his involvement with the Tokyo Yōikuin.

Along with Tokyo Yōikuin, Shibusawa was involved with a variety of other health and welfare institutions, including Hakuaisha, the forerunner of the Japanese Red Cross. In the wake of the Great Kantō Earthquake in 1923 he helped establish and run an organization to involve private citizens in relief and recovery efforts. Undaunted by age, he remained active in different projects late into his life.

Shibusawa had a great interest in promoting business and women’s education. He set up Japan’s first trade school, which later became the prestigious Hitotsubashi University. He also served in such positions as head the Tokyo Jogakkan School for Women and Japan Women’s University. 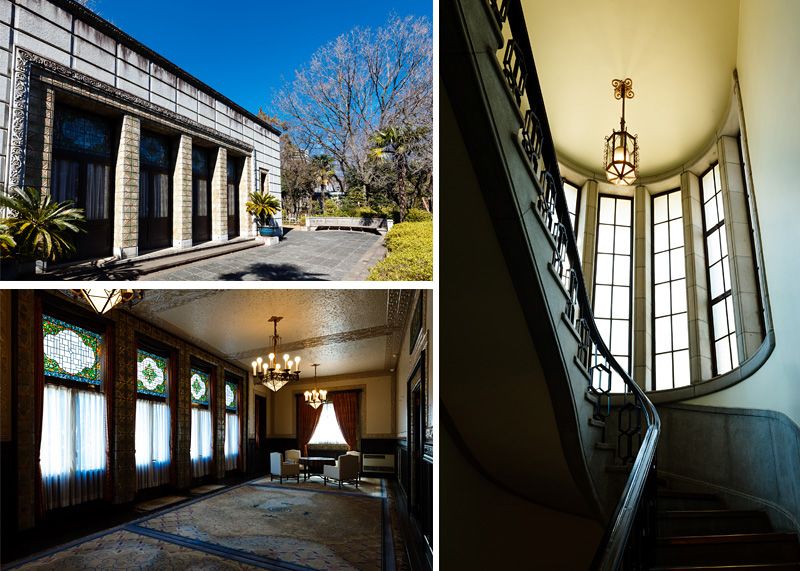 The interior of the Seienbunko library. Shibusawa used his position in the private sector for diplomacy, frequently hosting such dignitaries as Chiang Kai-shek at his Tokyo residence.

Private sector diplomacy is another aspect of Shibusawa’s legacy. Shibusawa was especially influential in mending relationships between Japan and the United States following a rift opened by the Russo-Japanese War of 1904–5. Alarmed by the growing discrimination directed at Japanese immigrants to the United States, the US Committee on World Friendship Among Children in 1927 sent some 12,000 “friendship dolls” collected from around the country to Japan. As chairman of the Japanese chapter of the organization, Shibusawa accepted the gifts and sent 58 Japanese dolls in return. 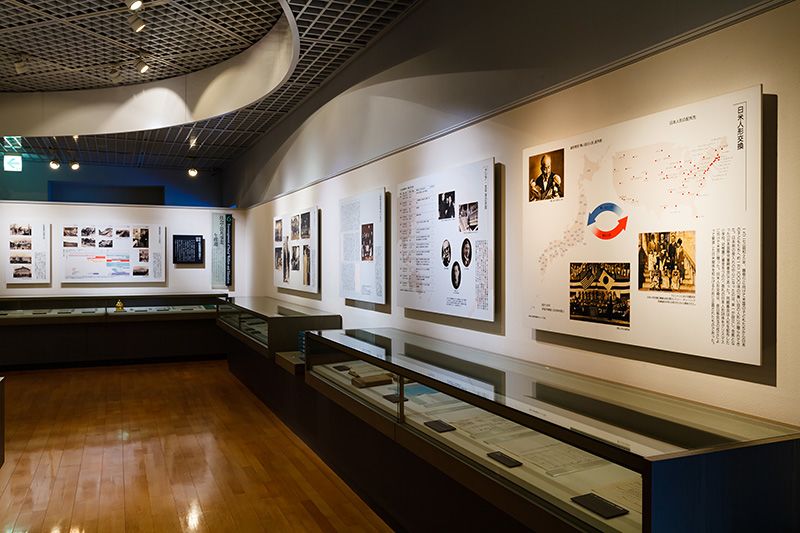 The museum’s section detailing Shibusawa’s private-sector diplomacy. Shibusawa continued to travel to the United States into his eighties.

Inoue explains that Shibusawa’s greatest appeal is not his business accomplishment, but his humanism: “He is known first and foremost as the father of Japanese capitalism, and naturally people admire his economic accomplishments most. But Shibusawa’s heart overflowed with kindness. I hope that visitors to the museum learn about other aspects of his life, like his childhood and social welfare activities. The goal of the museum is to help people understand that Shibusawa was a man who cared deeply about the welfare of those around him.” 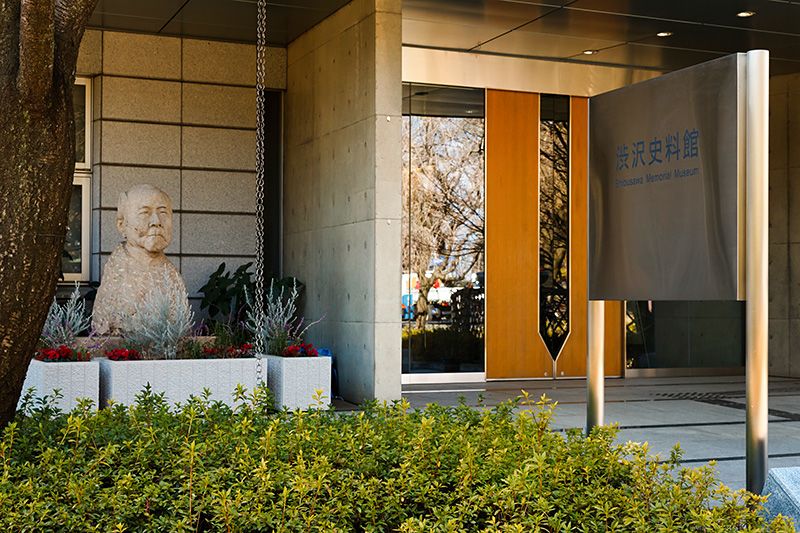 A bronze bust of Shibusawa greets visitors at the entrance of the museum.