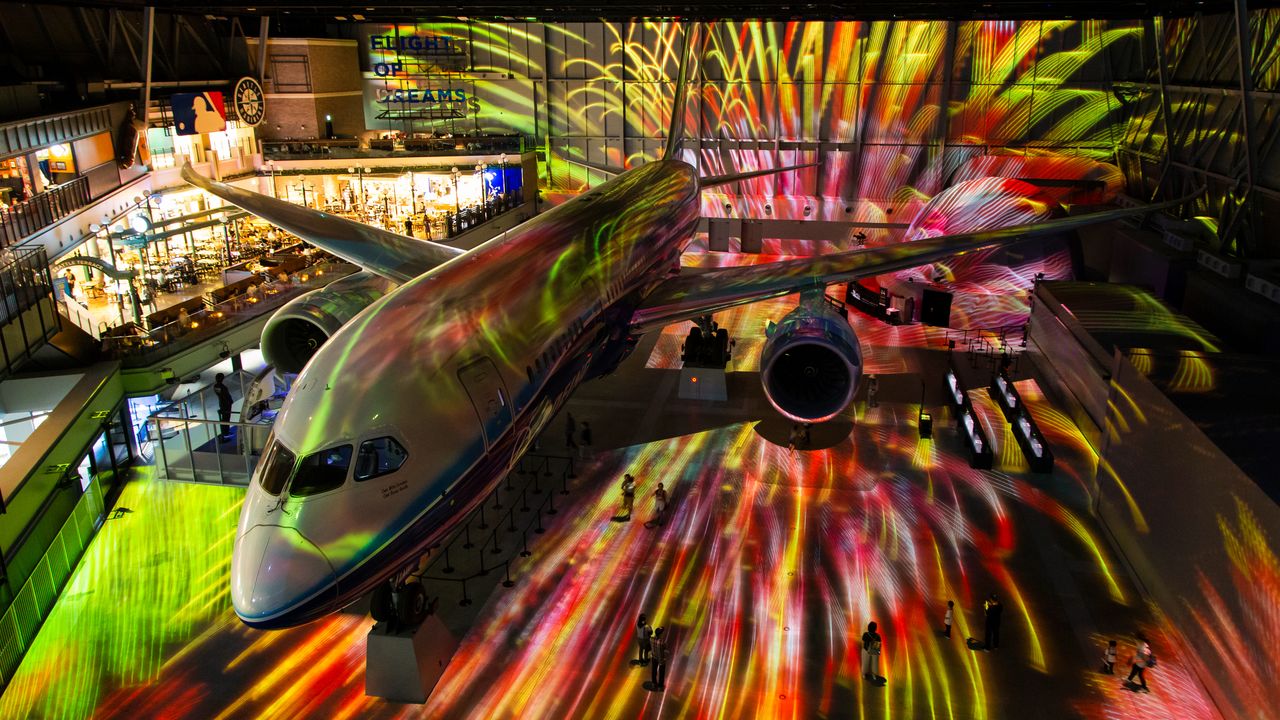 A New Terminal for a Central Japan Hub

On September 20, a new terminal was opened at Aichi Prefecture’s Chūbu Centrair International Airport, the gateway to the Tōkai region. Terminal 2 is exclusively for the use of low-cost carriers, and will initially be served by five airlines, including Jetstar Japan and Air Asia Japan. Centrair handled 12.4 million passengers in fiscal 2018 (April 2018–March 2019) amid burgeoning tourism from Asia, and aims to grow this number further and attract even more LLCs to the airport. 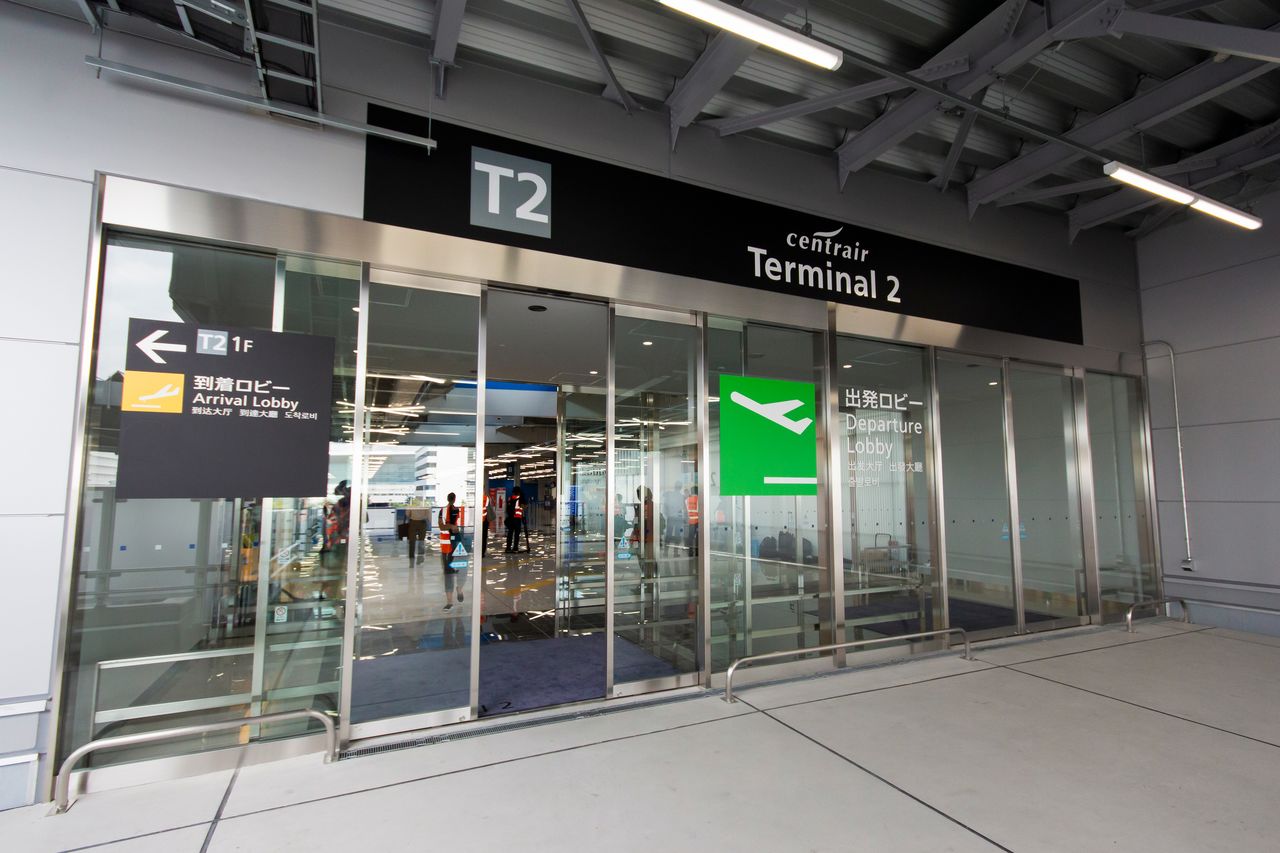 The entrance to the Terminal 2 departure lobby. 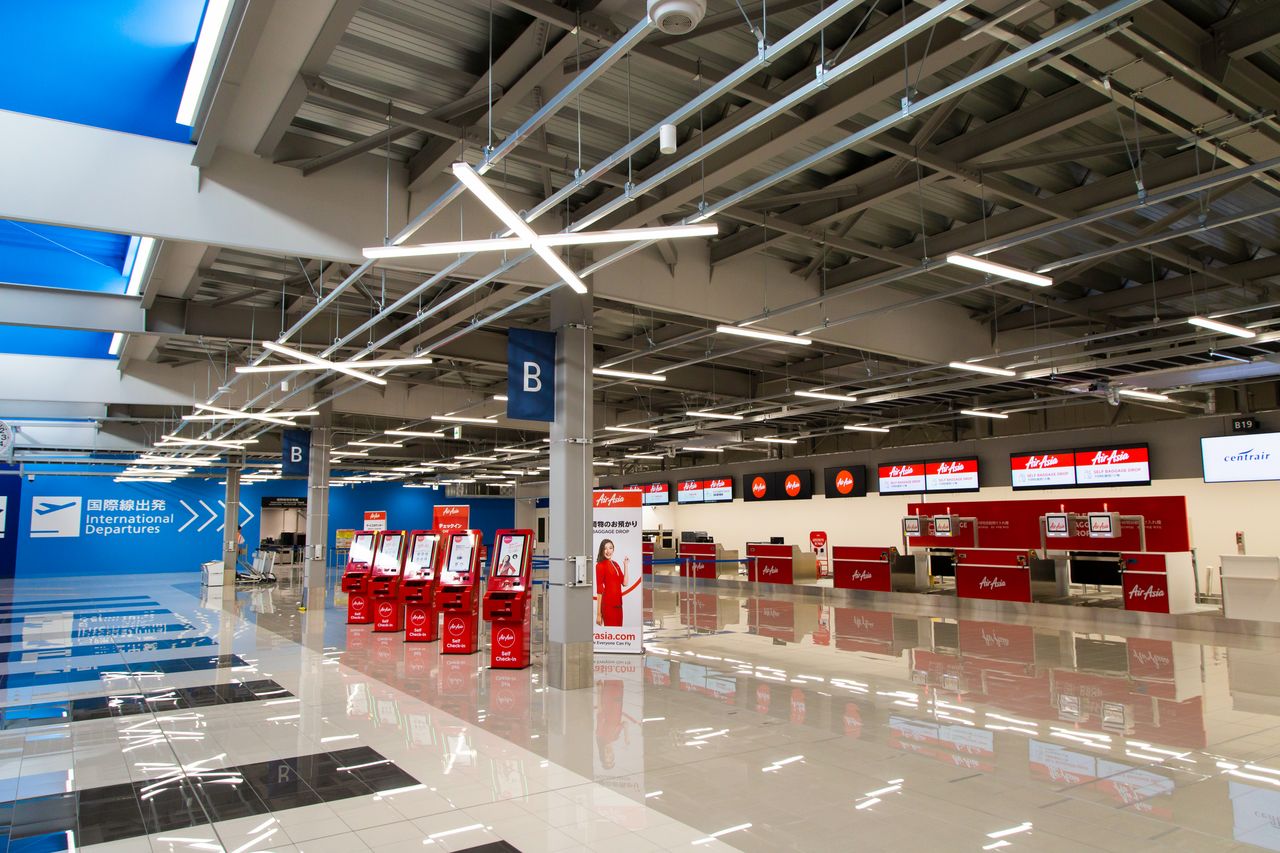 Check-in facilities have been reduced to the bare minimum. The exposed ceiling gives the terminal a sense of space. Passengers print out their own tickets and baggage labels using automated kiosks.

The management of Terminal 2 exercises strict control over operating costs and capital expenditure, and was able to achieve considerable efficiencies by installing automated check-in kiosks, as well as smart security lanes that allow multiple passengers to be processed at once. Lobbies, waiting areas, and other amenities are all very basic, and all duty-free and retail facilities are grouped together in one place. At the same time, the terminal caters to passengers’ needs with amenities like the cell phone charging points fitted to the seats in the waiting area. Rather than installing moving walkways, terminal management has taken a creative approach to making the long trek to the terminal fun by using projection mapping and putting up signage telling passengers how many calories they just burned.

Bold cost-saving initiatives have enabled the terminal to keep fees paid by airlines and passengers to a minimum, which is great from a user perspective. Centrair was the first airport in Japan to be predominantly constructed and operated by the private sector, and is known for its unique facilities and sound management practices. While it is common for the retail spaces in airports to be run by independent entities, at Centrair, the airport operator oversees all aspects of the airport’s operation, enabling it to take bold steps on an airportwide basis. 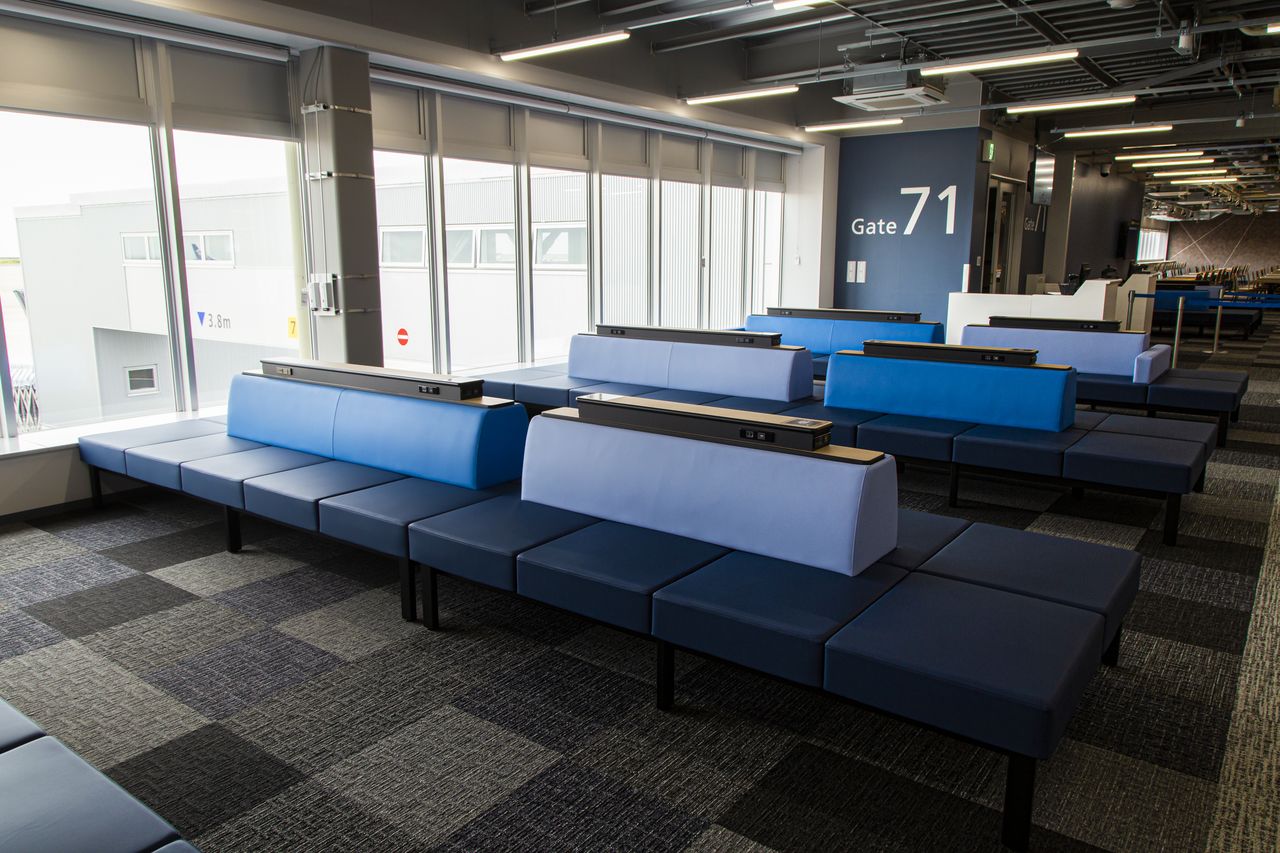 Gate lounge seating is basic, but includes device-charging sockets behind the seats. 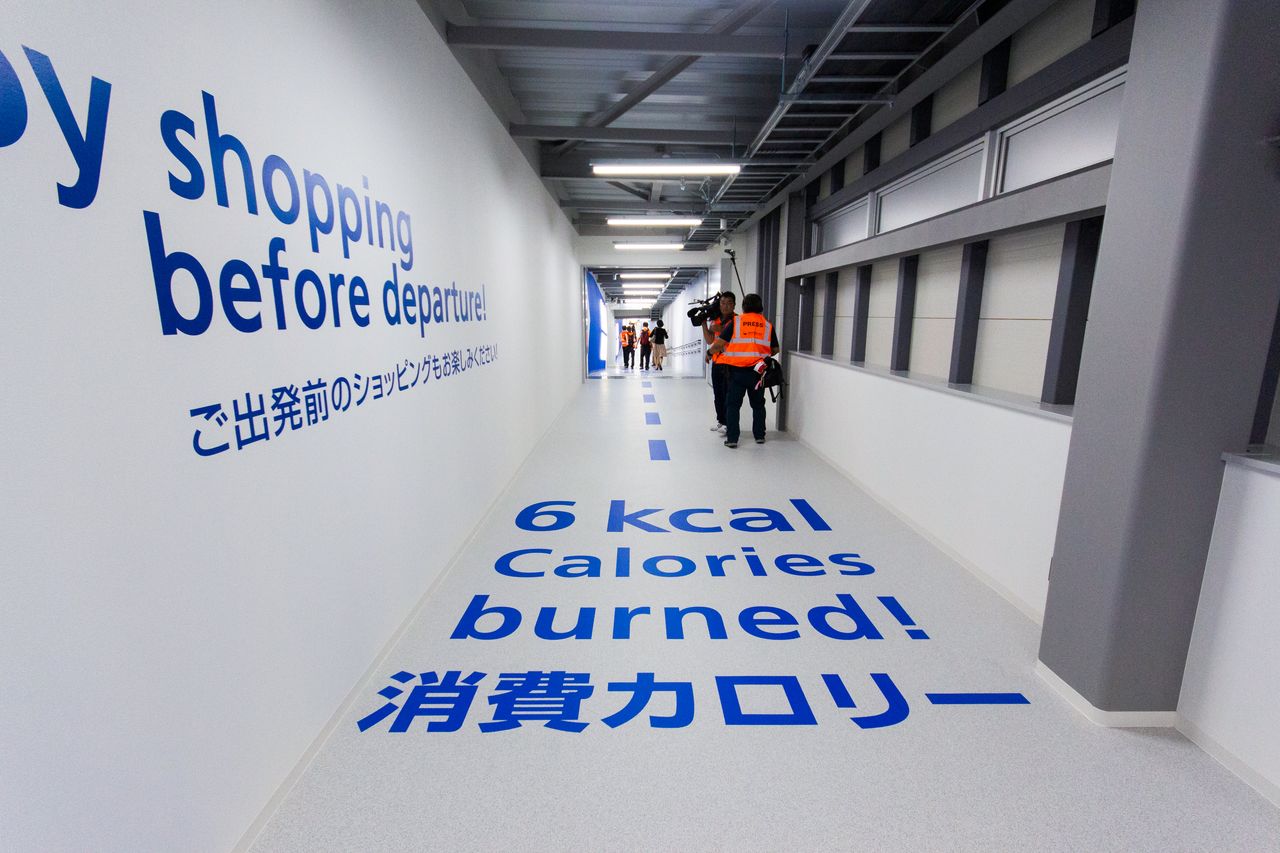 The airport has tried to make even this somewhat stark passageway a fun experience.

The range of sights and experiences offered also makes Centrair popular as a recreation facility. In addition to visiting the Sky Deck, an observation deck that juts out toward the runway, visitors can also take a dip in the waters of Fūno Yu, a spa that commands views of planes taking off—heaven for aviation enthusiasts. The airport’s Renga Dōri and Chōchin-Yokochō food courts—the former named after the European-style “brick-lined streets” that define its style, and the latter a more Japanese-looking “paper lantern alleyway”—are popular with families and couples.

But the piece de resistance of this unique facility has to be Flight of Dreams, an aviation “theme park” situated between the airport station and Terminal 2. Opened to the public somewhat ahead of the new terminal, on October 12, 2018, Flight of Dreams houses a real Boeing 787. The chance to see a modern airliner up close has created quite a buzz, attracting more than a million visitors in its first six months. 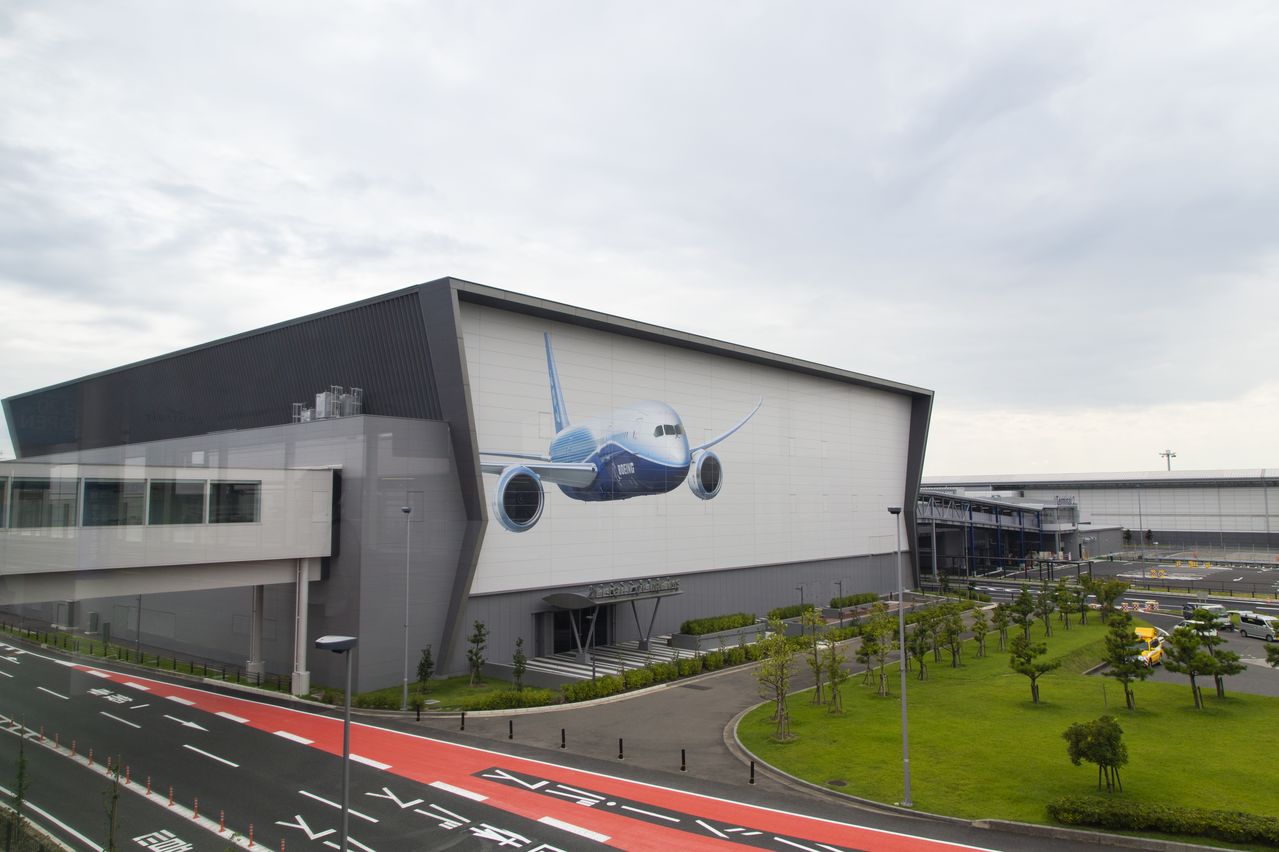 A mural of a Boeing 787 graces the Flight of Dreams building. The right wing of the Boeing 787 parked inside Flight of Dreams juts out over the food court. 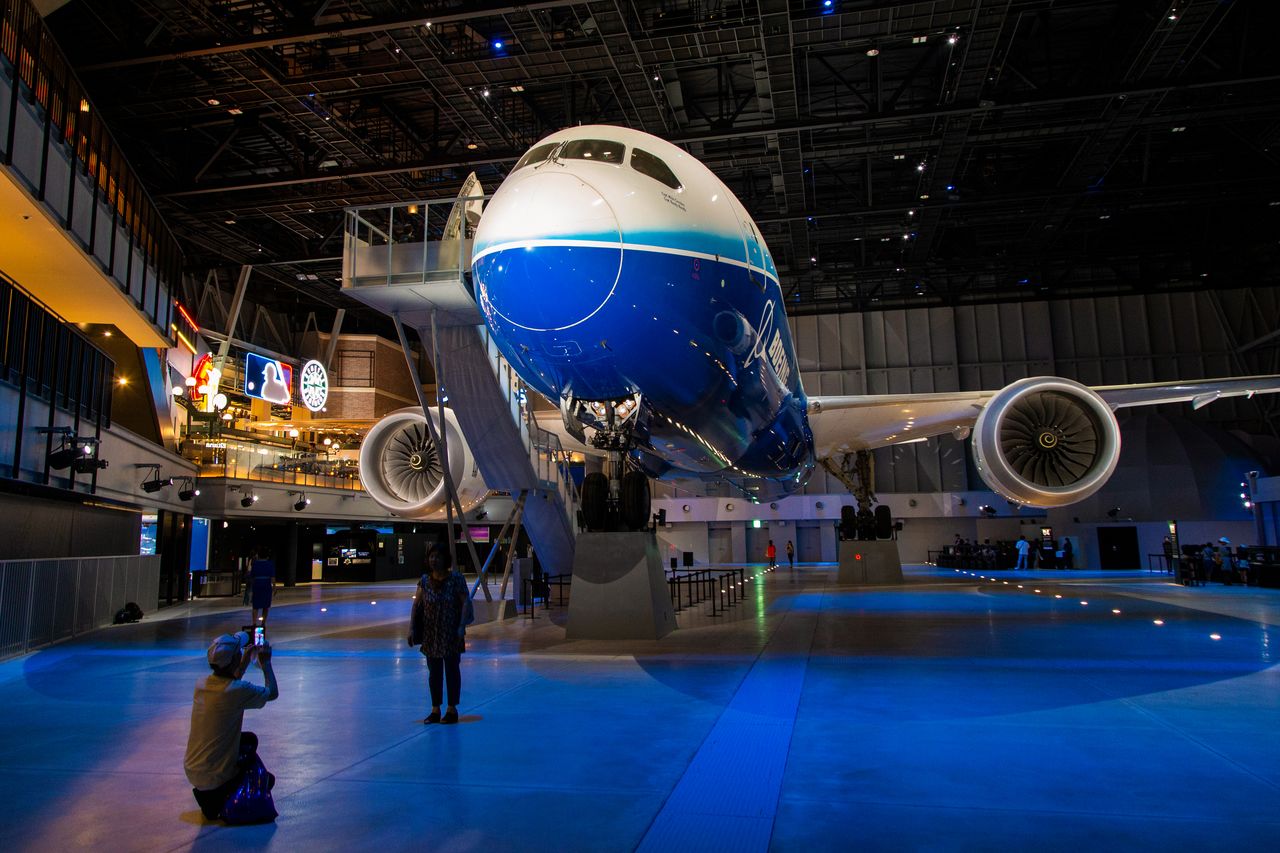 On the day we visited, the whale-like Boeing Dreamlifter, an aircraft that was key to the realization of Flight of Dreams, was parked near Terminal 2. With the Chūbu region surrounding Aichi being a major hub for aviation manufacturing, Centrair receives frequent visits from the Dreamlifter, Boeing’s dedicated aircraft component transporter, of which there are only four in existence. 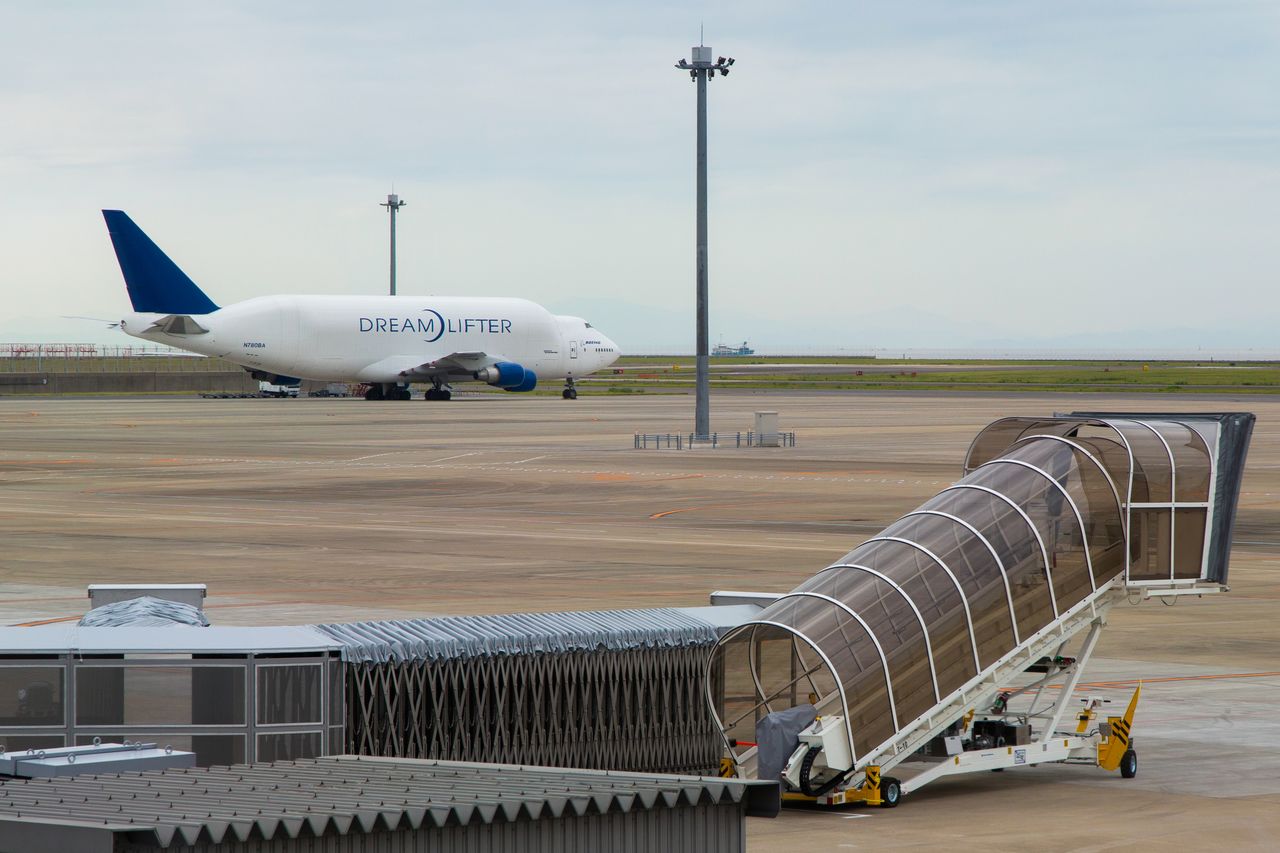 A Dreamlifter ready to transport aircraft components to the United States for final assembly, photographed from the Terminal 2 gate lounge.

Around 35% of the 787 airliner is manufactured in Aichi: the wings by Mitsubishi Heavy Industries, the wing to body fairing by Subaru, and the forward fuselage by Kawasaki Heavy Industries. Centrair is also home to the Dreamlifter Operations Center, a temporary component storage facility.

It was in recognition of the strong links with the area that Boeing gifted the first ever Boeing 787 produced, the ZA001 test aircraft, to the airport. The second and third levels of Flight of Dreams comprise Seattle Terrace, a restaurant area that recreates the atmosphere of Boeing’s Seattle home, and give visitors the chance to enjoy dining under the 787’s wing. The ground floor features the first ever Boeing store outside the United States. Here visitors can browse official merchandise formally unavailable outside America. You don’t have to be an aviation enthusiast to get excited by this shop! 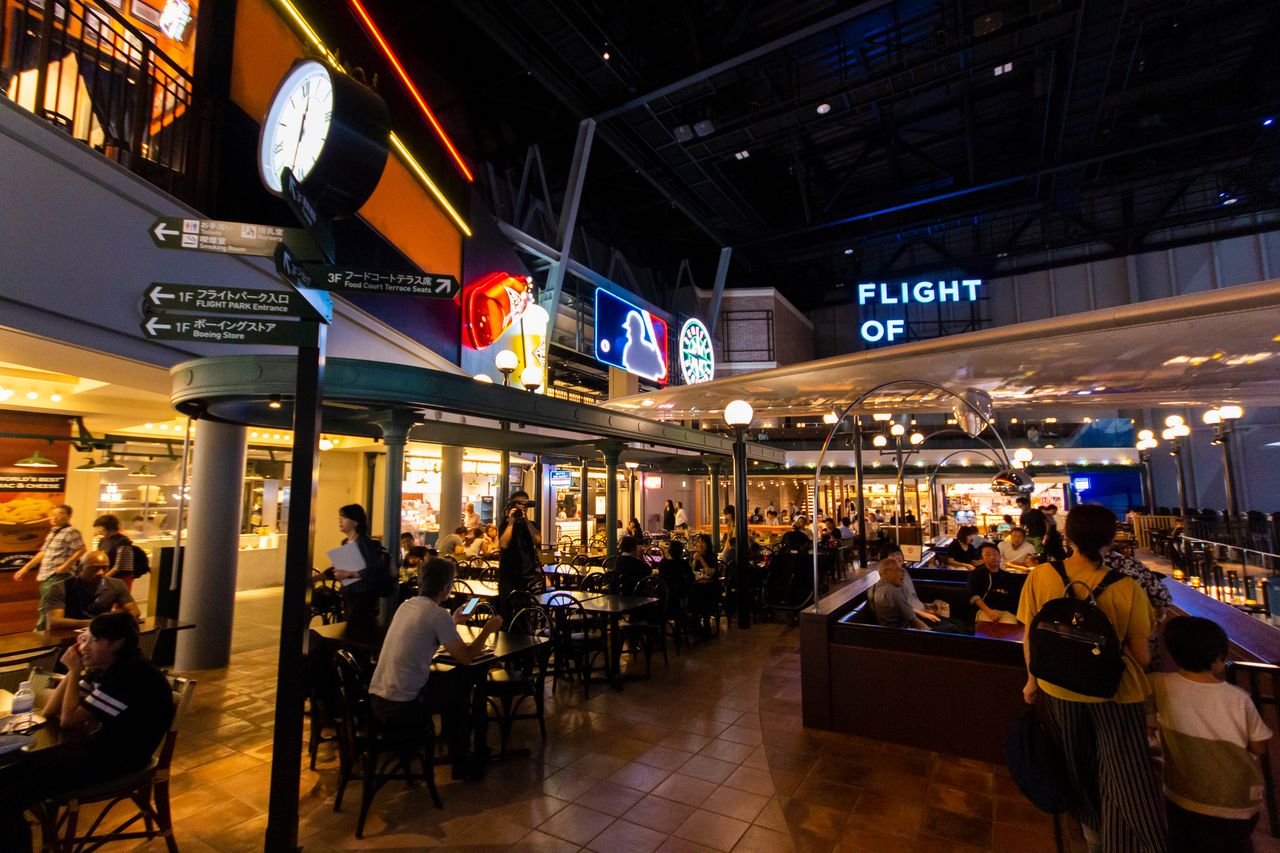 Admission to Seattle Terrace is free. The Boeing store boasts a range of 500 items, including official company merchandise.

Visitors who pay to enter the Flight Park area get access to the underside of the 787 and otherwise enjoy access to this beautiful machine that would be unthinkable at a regular airport. The interactive displays by world-renowned TeamLab will wow even adult visitors. 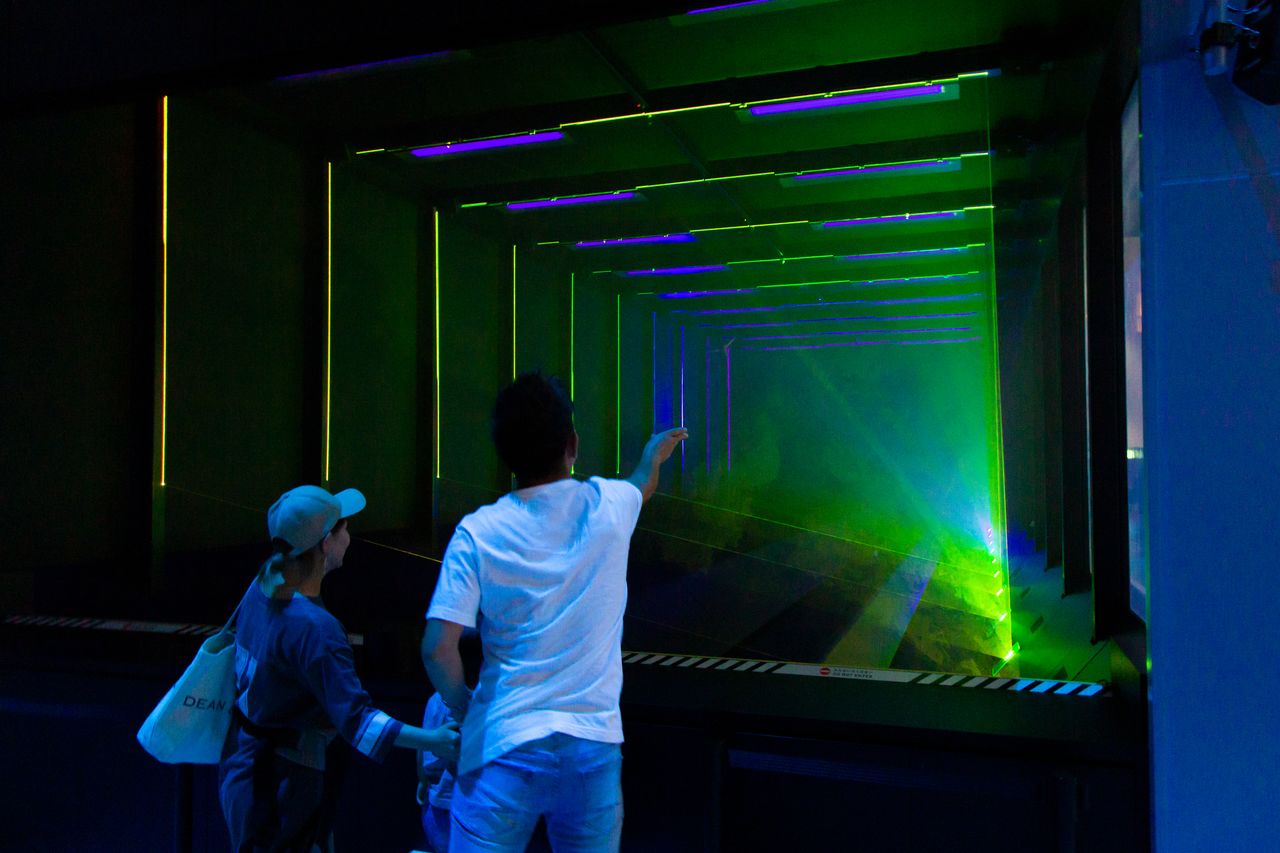 In this attraction, visitors throw paper planes through the arches to control the light and sound show. 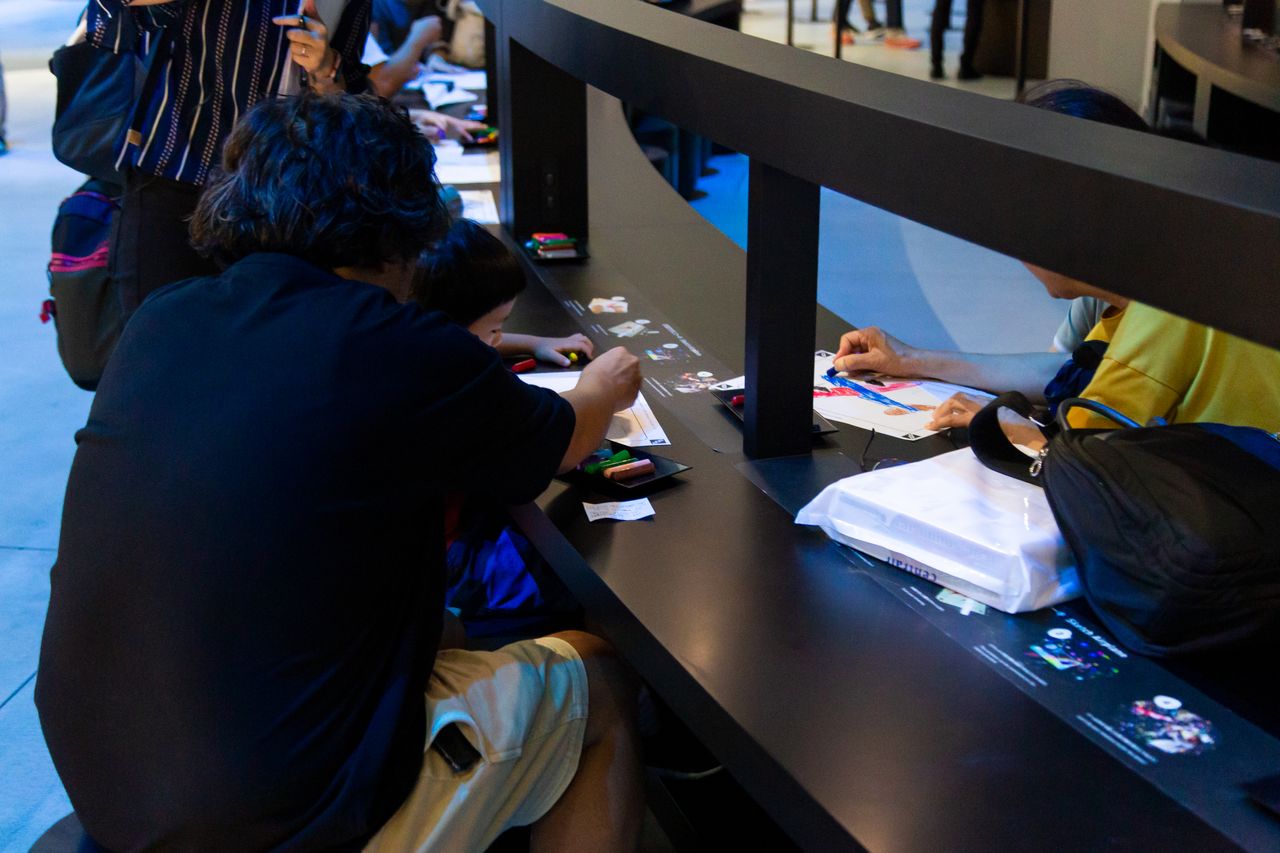 Visitors can also draw their own airplane and then fly a projected image of it around the dome.

A particular draw is the projection mapping attraction Fly with the 787 Dreamliner, which projects ethereal images on the interior of the facility. Visitors are treated to the sight of pods of whales swimming around the aircraft and planes drawn by children flying alongside it. The projections are visible from free-admission areas like the Seattle Terrace, but are most impressive when viewed from the viewing area on level four of the Flight Park. In short, Flight of Dreams is too high quality an attraction simply to be used to kill time before your flight: we recommend that airport users turn up early to give themselves time to enjoy this fantastic entertainment space unique to Centrair. 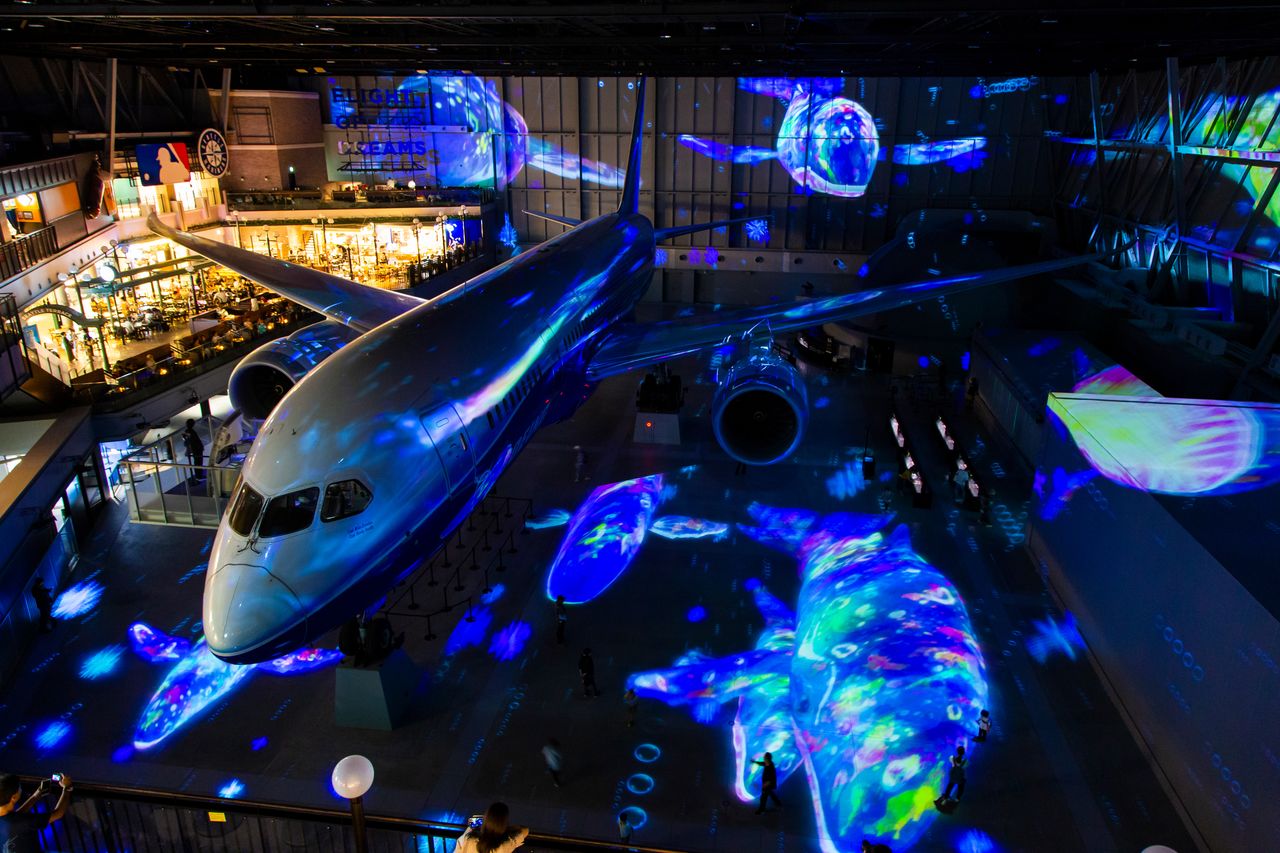 The Fly with the 787 Dreamliner attraction projects a pod of swimming whales around the airplane. 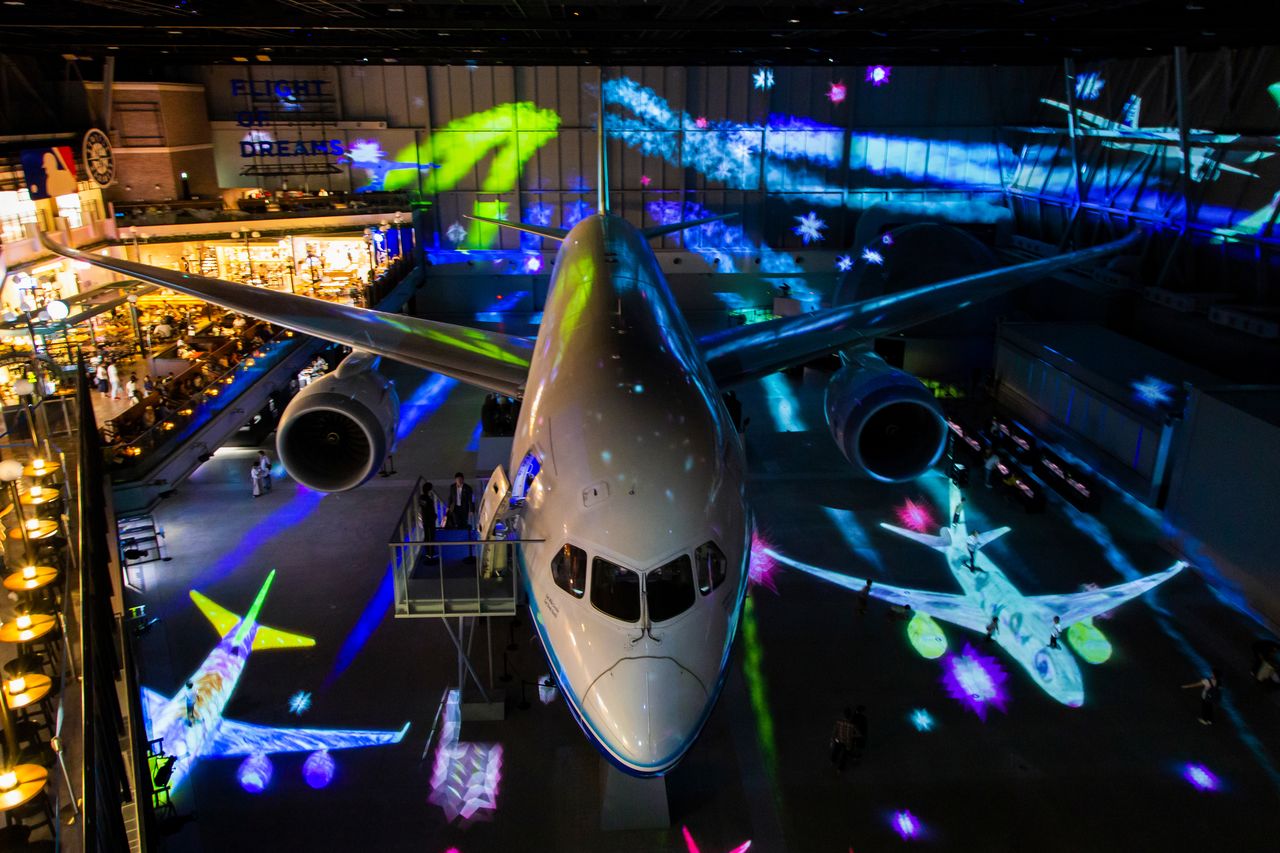 Planes drawn by visitors fly alongside the 787.

Flight of Dreams is also connected to another new facility located on the other side of Terminal 2: Aichi Sky Expo, which opened to the public in August. 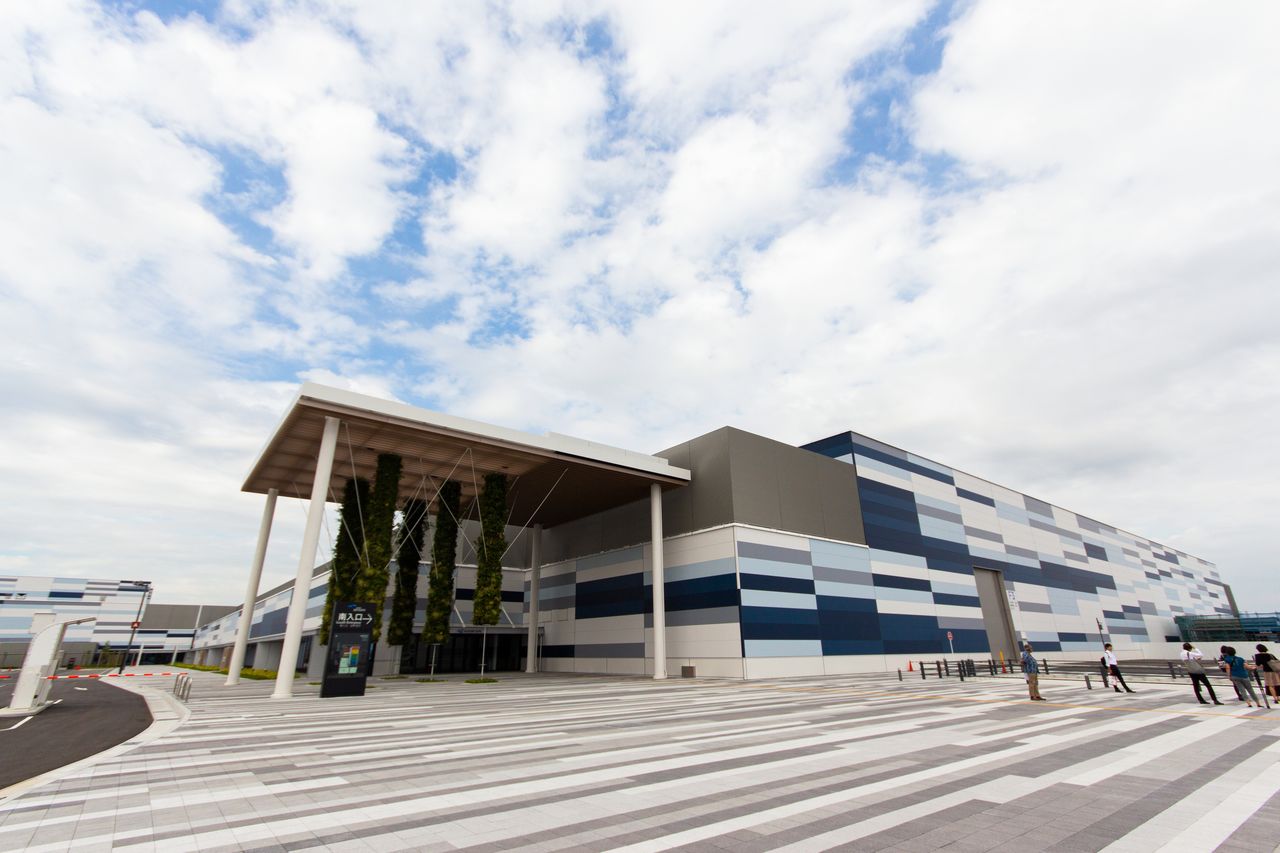 The first ever major event center in Japan to be directly connected to an international airport, Aichi Sky Expo is easily accessible both from Japan and overseas. Comprising six halls, each 10,000 square meters in size, as well as a 3,400-square-meter conference facility, Aichi Sky Expo is one of the largest event centers in Japan.

With no columns to get in the way, Hall A is perfect for entertainment events. Halls B through F can be merged into one to create a giant, 50,000-square-meter event space. As the only permanent facility in Japan where dutiable goods from overseas can be displayed in a bonded area, it should be highly prized by organizers of international events.

Flight of Dreams and Aichi Sky Expo have a uniqueness and international appeal unique to Centrair, and are being counted on to bring ever larger numbers of domestic and overseas tourists to the Chūbu region. The main entrance to Aichi Sky Expo. The lavish use of wood makes for a relaxed atmosphere. 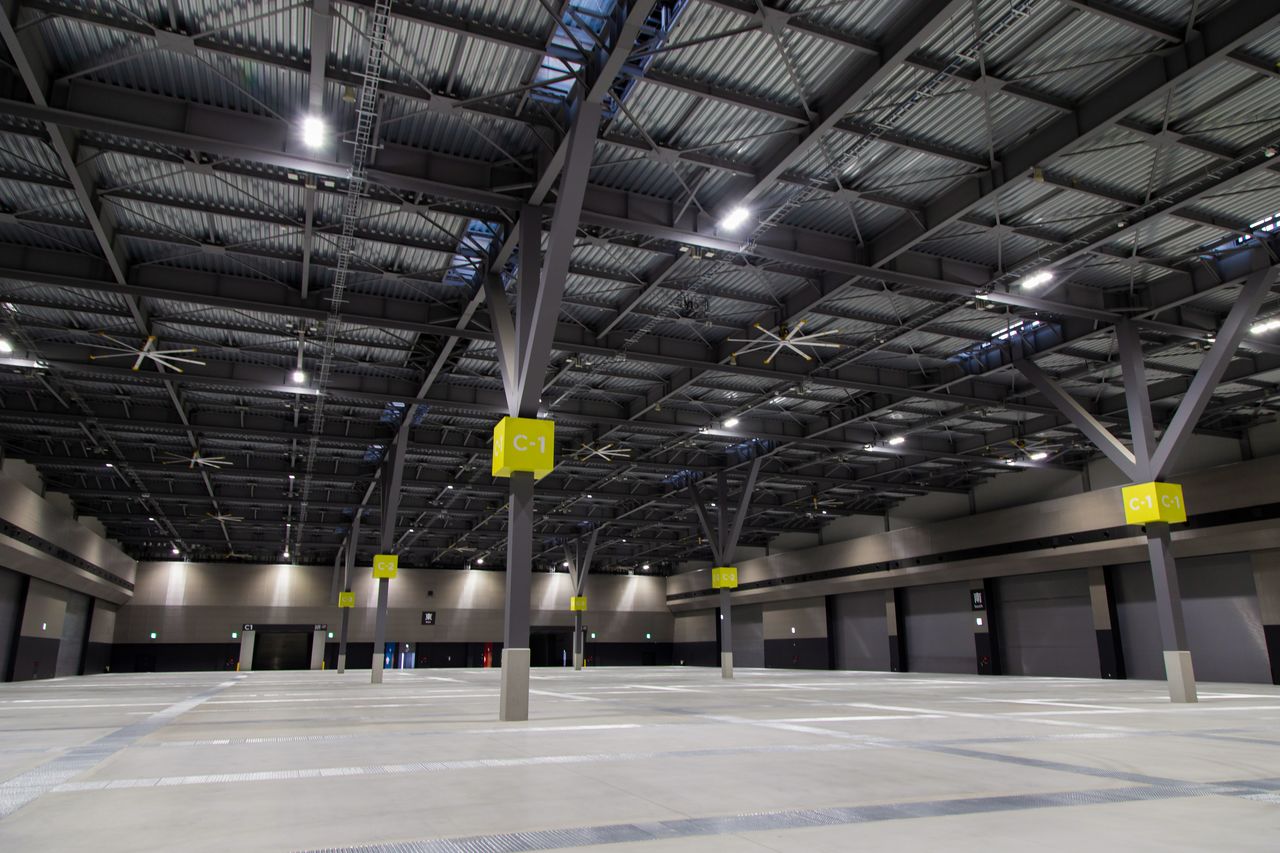 Hall C. The shutters on the right side of the space can be raised to connect the space to the adjacent hall.

(Originally published in Japanese. Reporting and text by Nippon.com. Banner photo: A lightshow starring the 787, photographed at Fly with the 787 Dreamliner.)