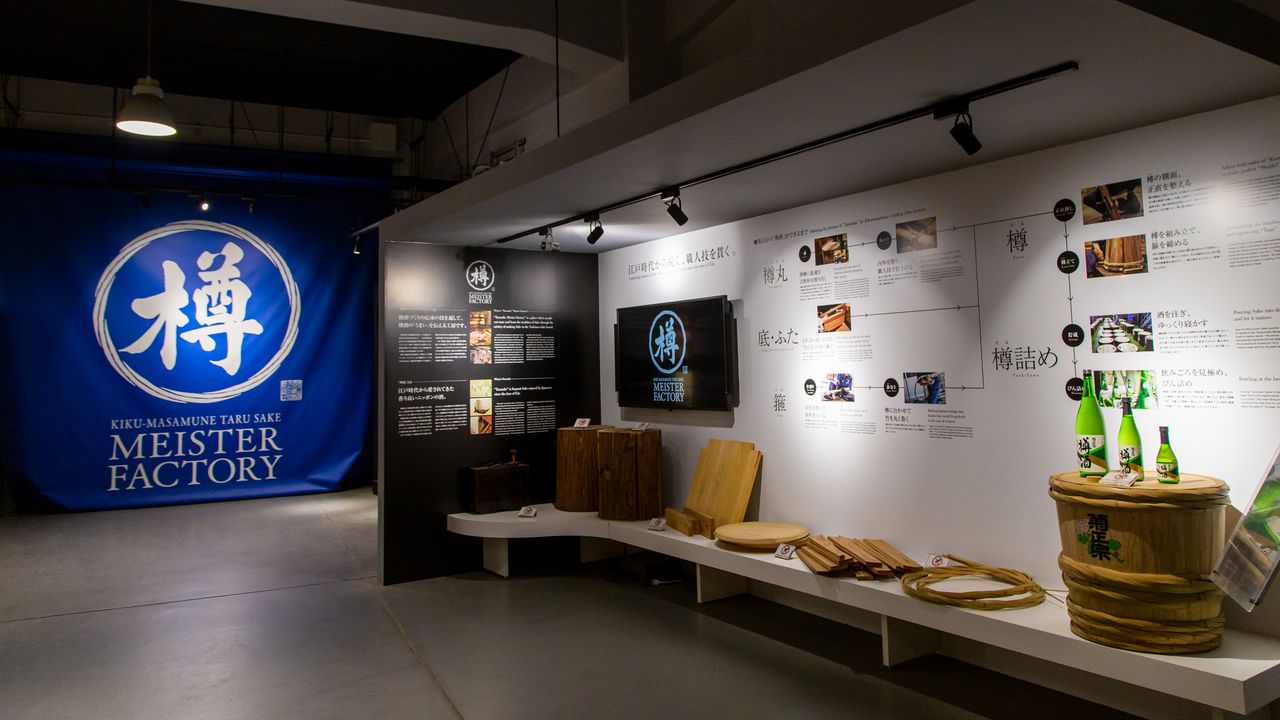 Barrels of Fun: Preserving the Nada Sake Taste and Tradition

Travel Food and Drink May 22, 2020
The kagami-biraki ceremonial opening of a sake barrel on a celebratory occasion, once a common sight, is today increasingly rare. Sake barrels are not simply utilitarian vessels; they also impart the light fragrance of wood to the drink within. A look at the history of these vessels in the five sake-producing areas of Hyōgo Prefecture, known collectively as the Nada gogō.

Kobe Port Tower, a landmark of the Kobe bay area, has a five-story observation deck offering a panoramic view of the city and beyond. The third level of the observation deck, with a rotating floor that takes a leisurely 20 minutes to revolve 360°, merits special attention. It’s the home of the Sake Taru (“sake barrel”) Lounge, a sake tasting bar opened in July 2019 that features the brands of the Nada gogō, the five celebrated sake-producing districts of the region. Echoing the barrel theme, wood is everywhere, from the chairs and tables arranged along the windows lining the edge of the deck to the wood paneling on the walls and the bar counter. 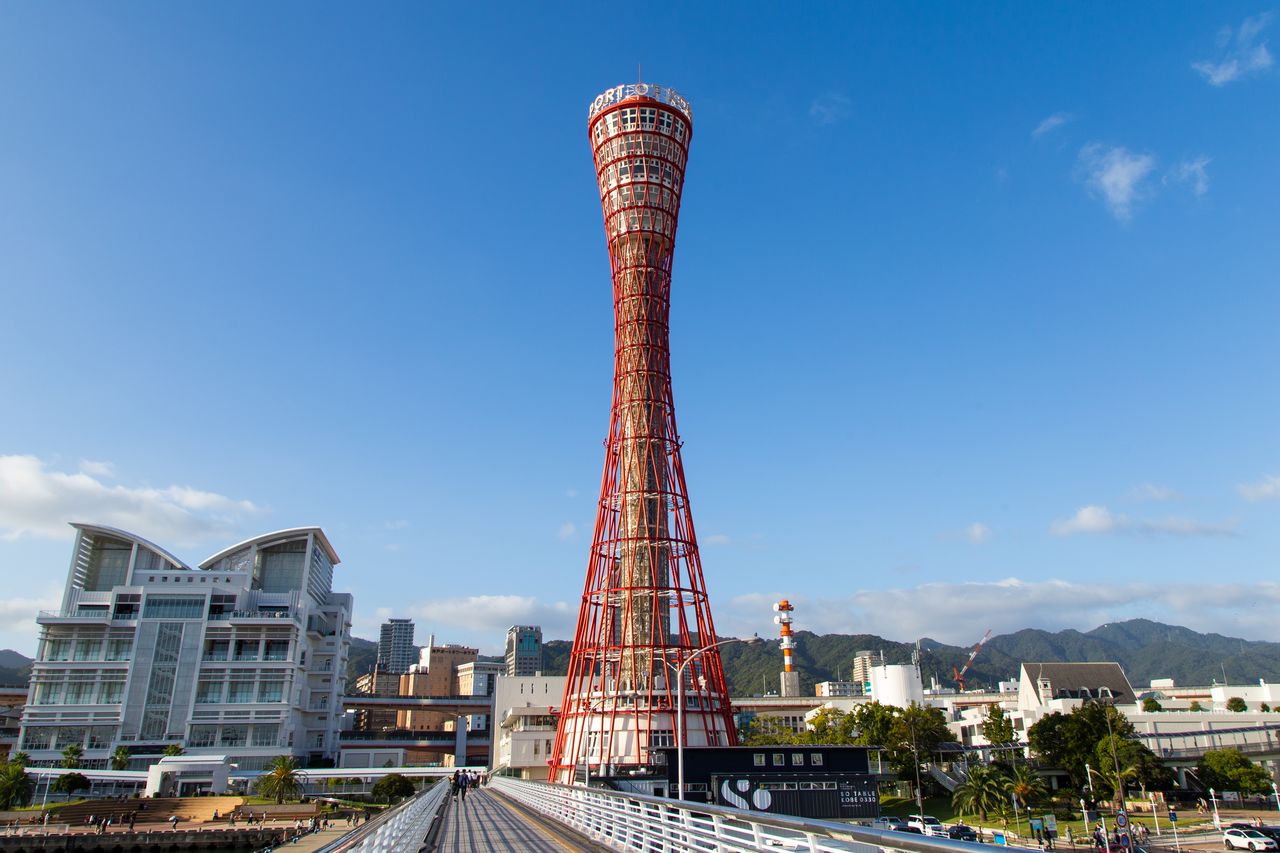 Kobe Port Tower, a local landmark. The structure, shaped like a traditional hand drum, has a five-story observation deck at the top. 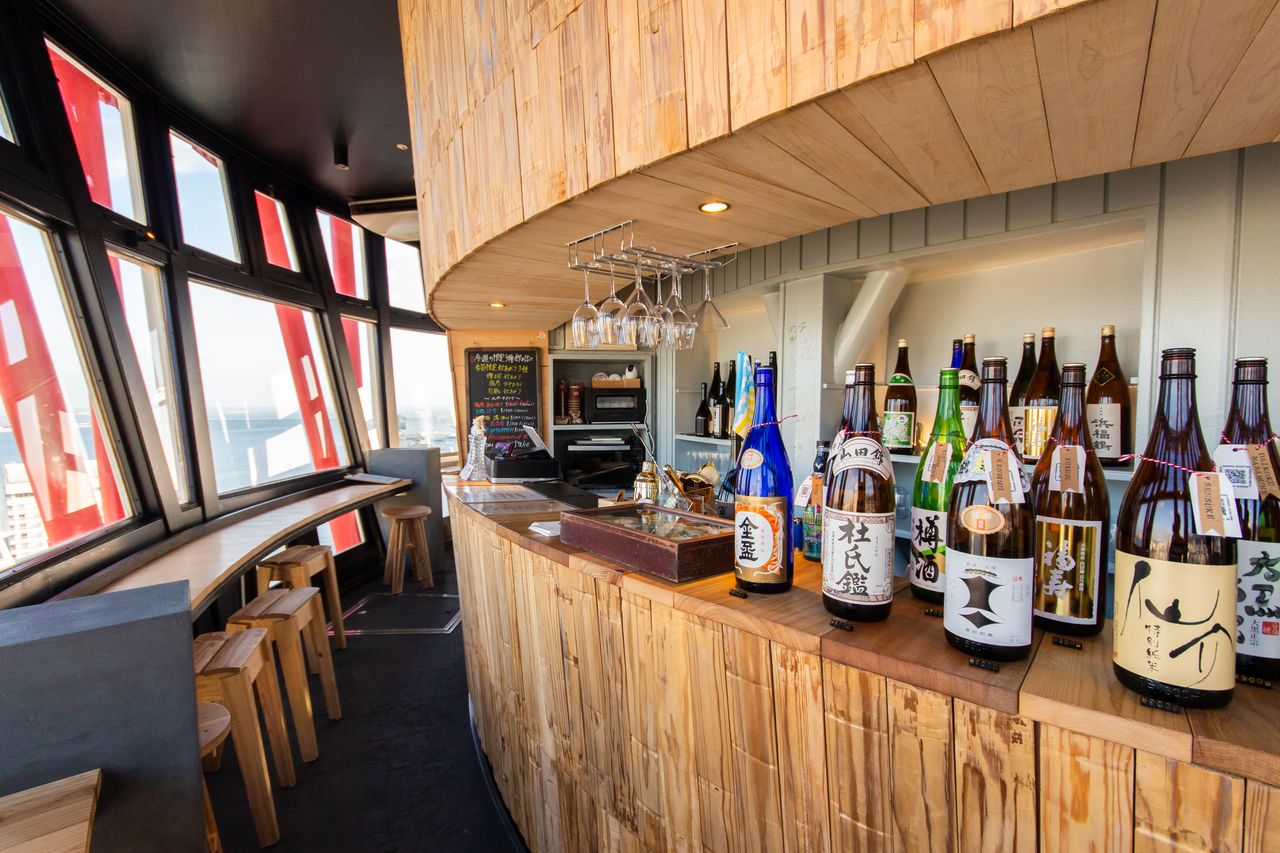 Hyōgo Prefecture ranks first in Japan for both production and sales volume of sake. The leading production areas in the prefecture, the Nada gogō, run along the shoreline from the eastern part of Kobe to the city of Nishinomiya to the east. In the Edo period (1603–1868) the area was a leading supplier of sake to Edo (present-day Tokyo), when ships laden with barrels of sake sailed north from Kamigata (the Kansai area) to the capital. It retains its title as Japan’s leading sake-producing area today.

True to its name, at the Sake Taru Lounge, old sake barrels were taken apart and repurposed to clad the walls and make the chairs. Those barrels, made of cedar, were not merely utilitarian containers for sake. Cedar has antiseptic properties and also imparted a refreshing aroma to the sake during the 10-day sea voyage to Edo.

At the Lounge, sake aficionados can find all the Nada gogō brands, including some only available locally. Amazake, a sweet, low-alcohol rice-based beverage, and tidbits featuring local produce are also on offer. Sitting at a windowside table and enjoying the scenic view, drinkers will no doubt be interested in learning more about the sake of Nada, its history, and the secrets to brewing here. 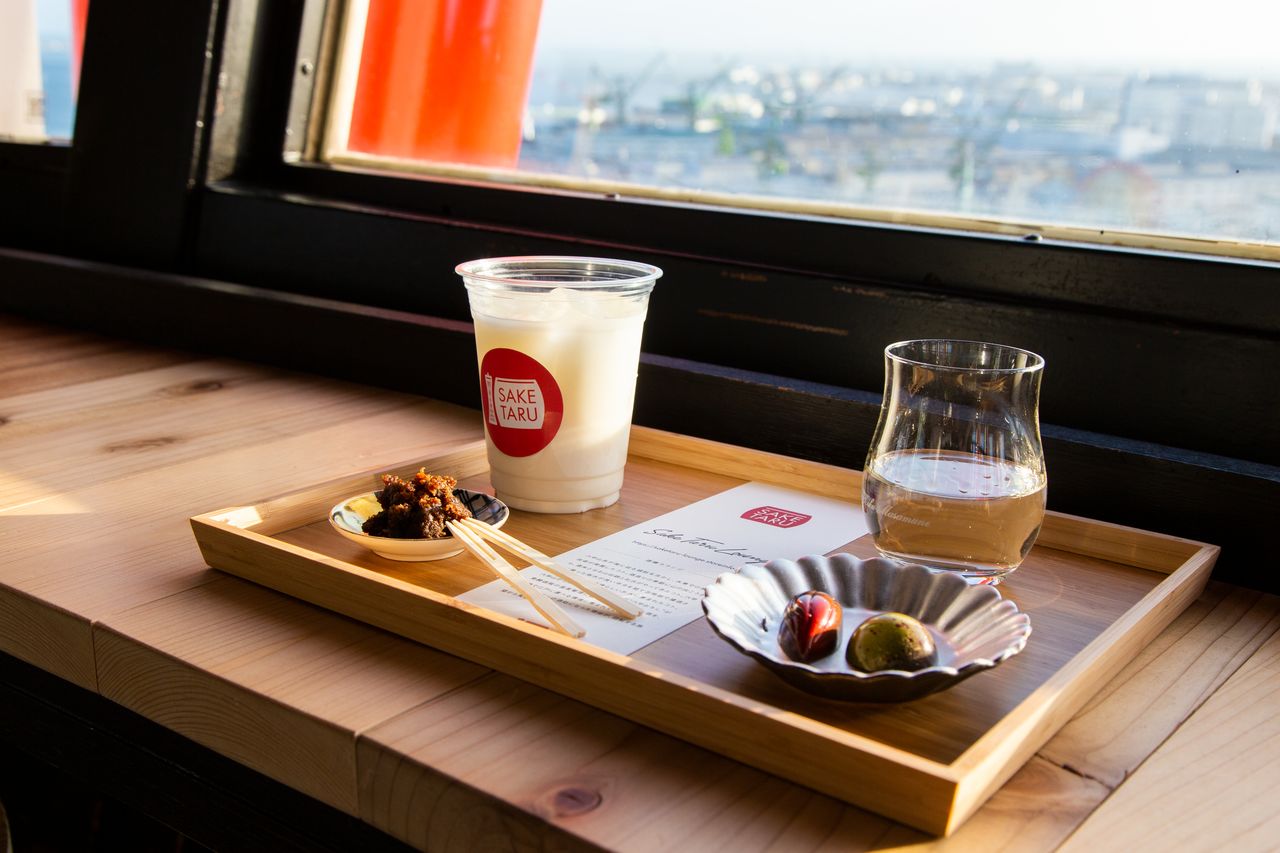 Amazake from the breweries of Nada is ¥500, and sake starts from ¥700. Hyakumoku (right) is the first new sake brand launched by Kiku Masamune in 130 years.

To the north of Kobe lie the Rokkō mountains, source of the mineral-rich water well suited to sake brewing, and the Rokkō oroshi, freezing winter winds that once helped to quickly cool the steamed rice. Beyond those mountains are the rice fields producing Yamadanishiki and its predecessors, the best strains of rice for sake brewing. This farming area was also the home of the tōji master brewers who came to Nada each autumn once the harvests were in to practice their craft over the winter months, the traditional period for brewing sake. On the south side is the port from which ships carrying cargos of sake departed for Edo. Natural features such as these contributed to the success of the Nada gogō. 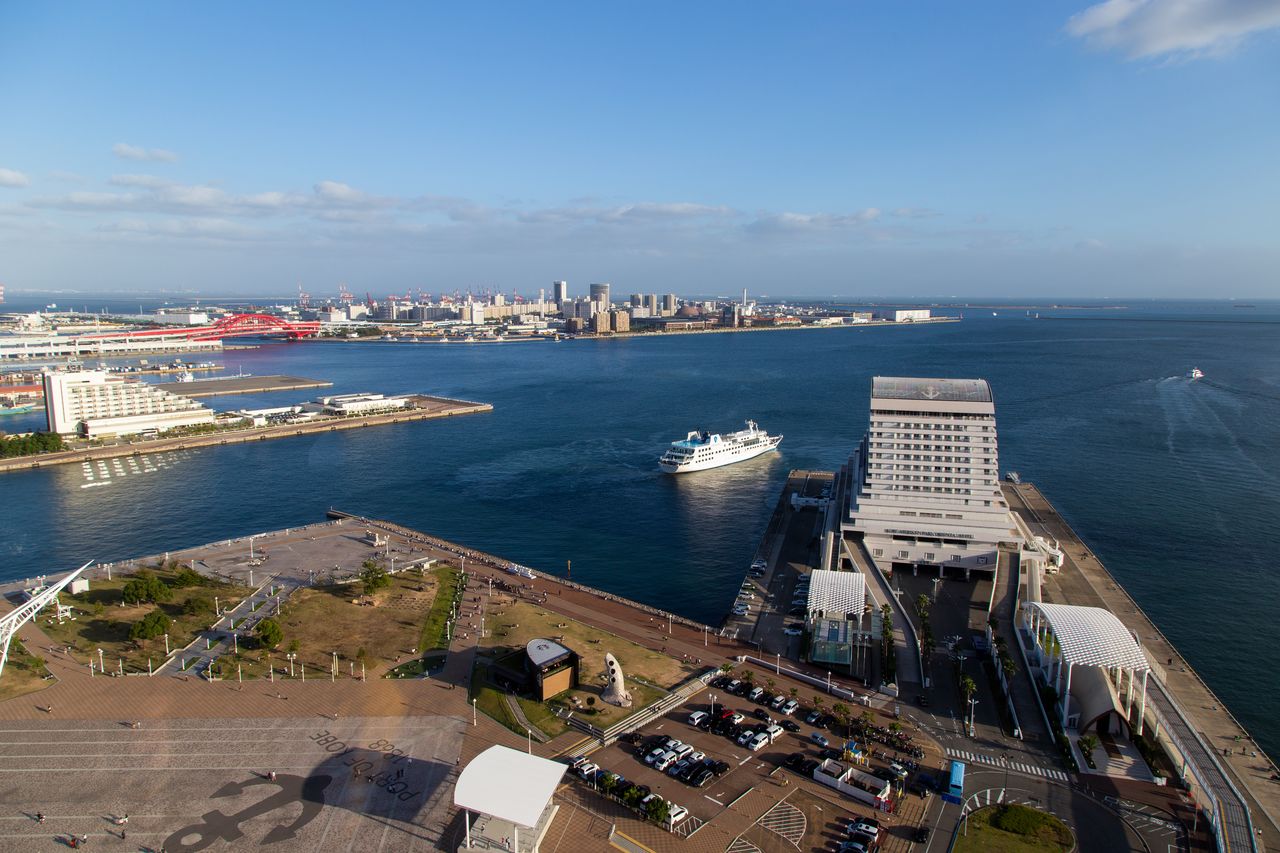 Panoramic view of the Kobe seaside from the Sake Taru Lounge. 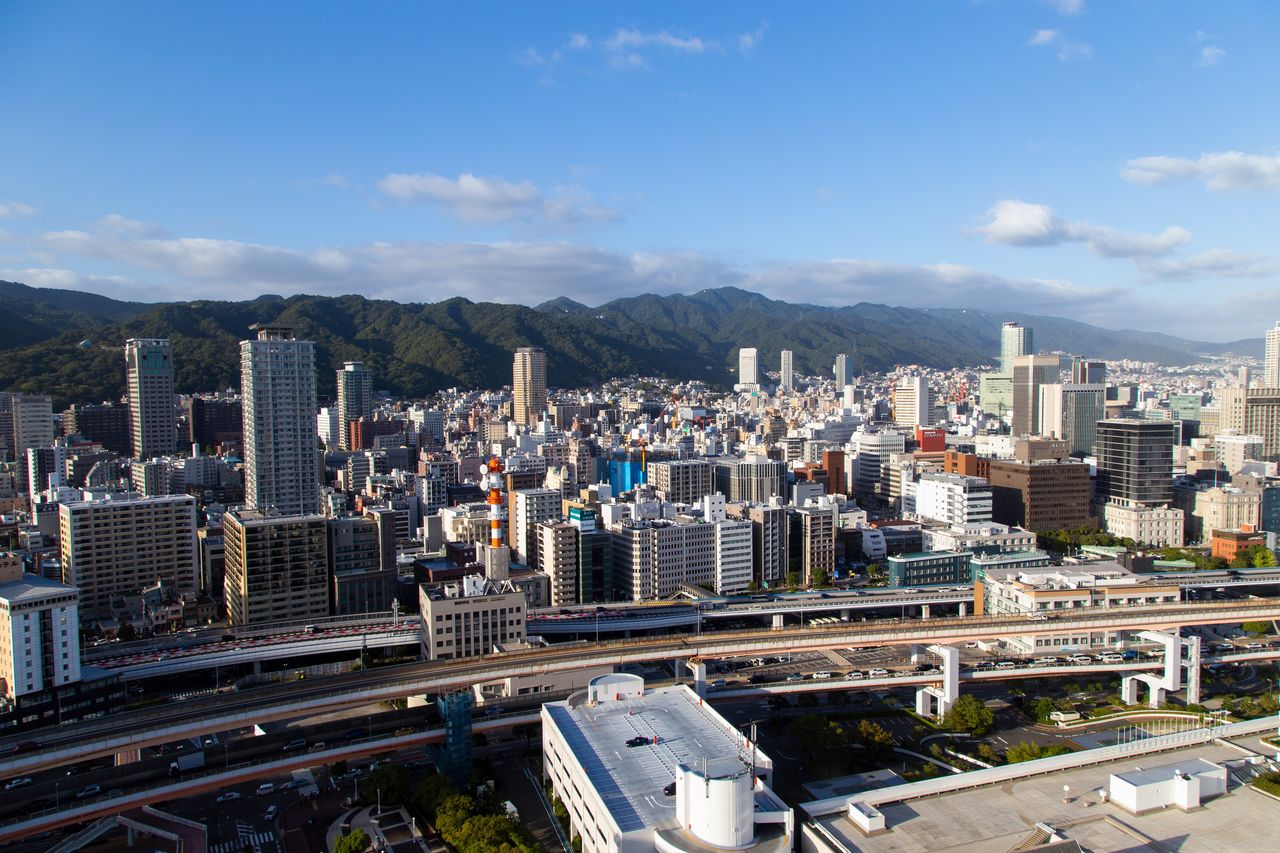 On the north side, a view of Kobe and the Rokkō mountains in the distance.

Barrel-Making and Sake Bound for Edo

The Kiku Masamune Tarusake Meister Factory at Mikagegō, one of the five producing areas of Nada, features an exhibit on sake barrels. 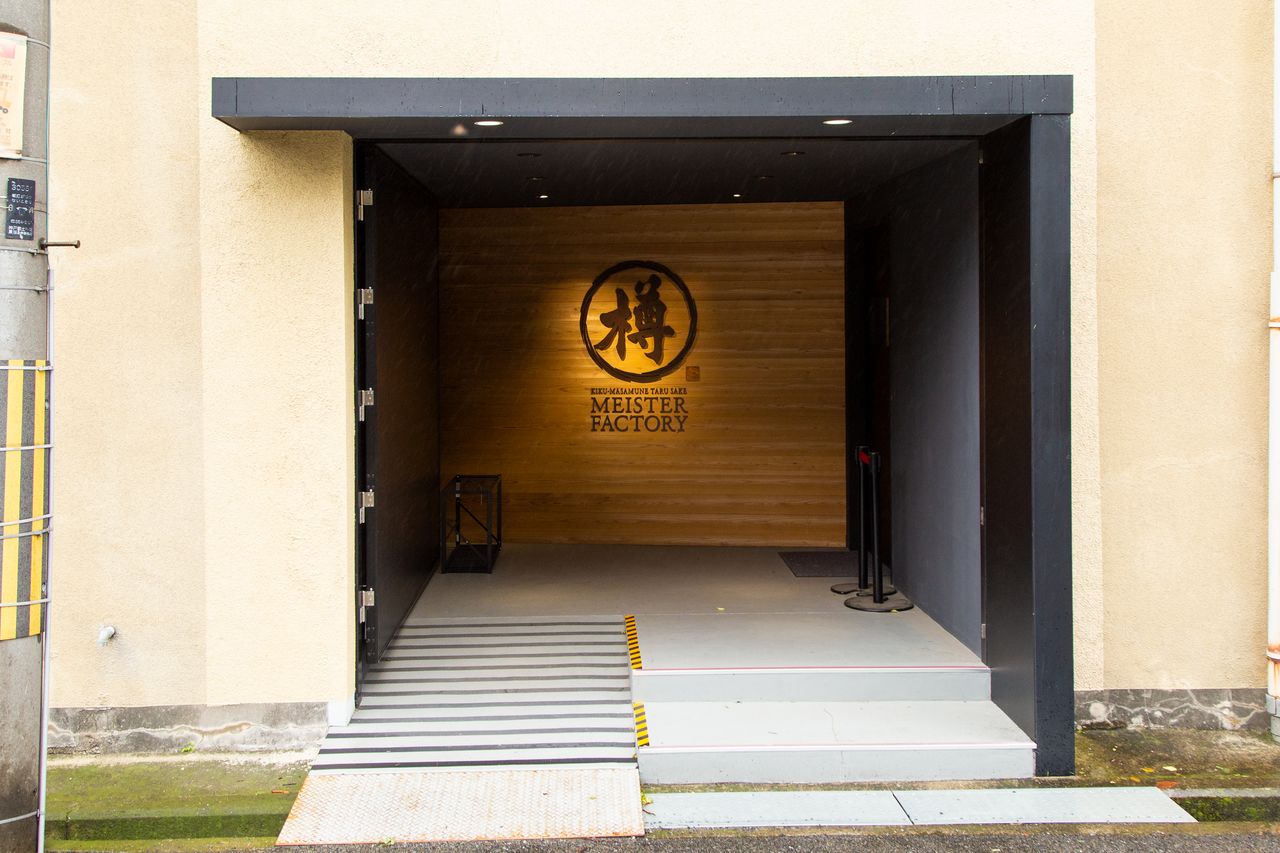 The entrance to the Tarusake Meister Factory. 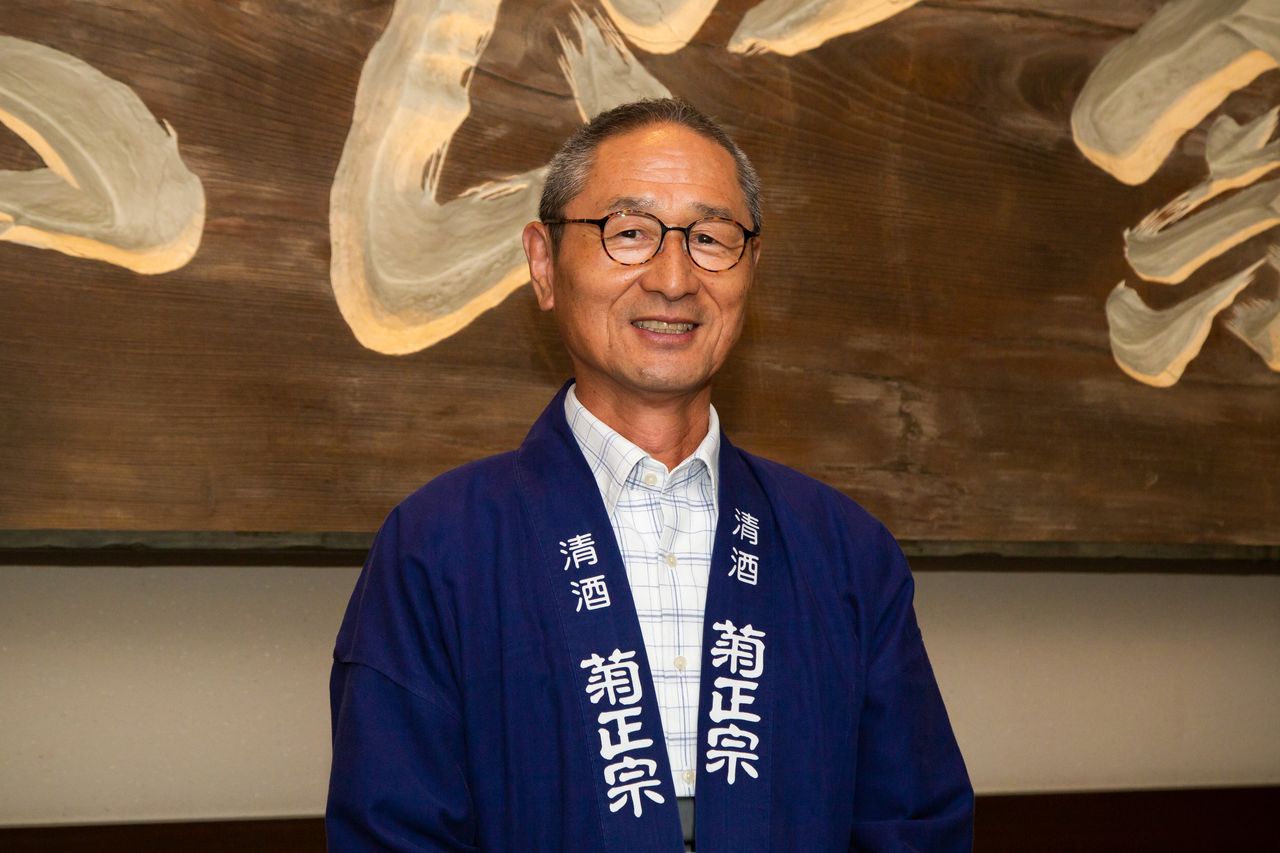 Kiku Masamune Sake Brewery Museum director Gotō Mamoru relates how the Nada gogō prospered thanks to kudarizake bound for Edo. Although geographically north of Kamigata, or Kansai, sake shipped from Nada was referred to as kudarizake, sake “coming down” from Kamigata, the leading commercial and cultural center of the day, to Edo, which was presumed to be a less sophisticated place. Shipped in cedar barrels, the sake took on the refreshing scent of the wood during the 10 days or so of the sea voyage, and Edo drinkers developed a taste for this kind of tipple.

“Kiku Masamune, founded in 1659, is one of the best-known of the Nada sake breweries, which flourished thanks to the kudarizake trade. Kiku Masamune is famous throughout Japan for the dry taste of its sake even today,” says Gotō. The Kiku Masamune Sake Brewery Museum traces the history of sake brewing and the care that Kiku Masamune devotes to making it. It has a sister operation, the Tarusake Meister Factory across the street, which opened in 2017. 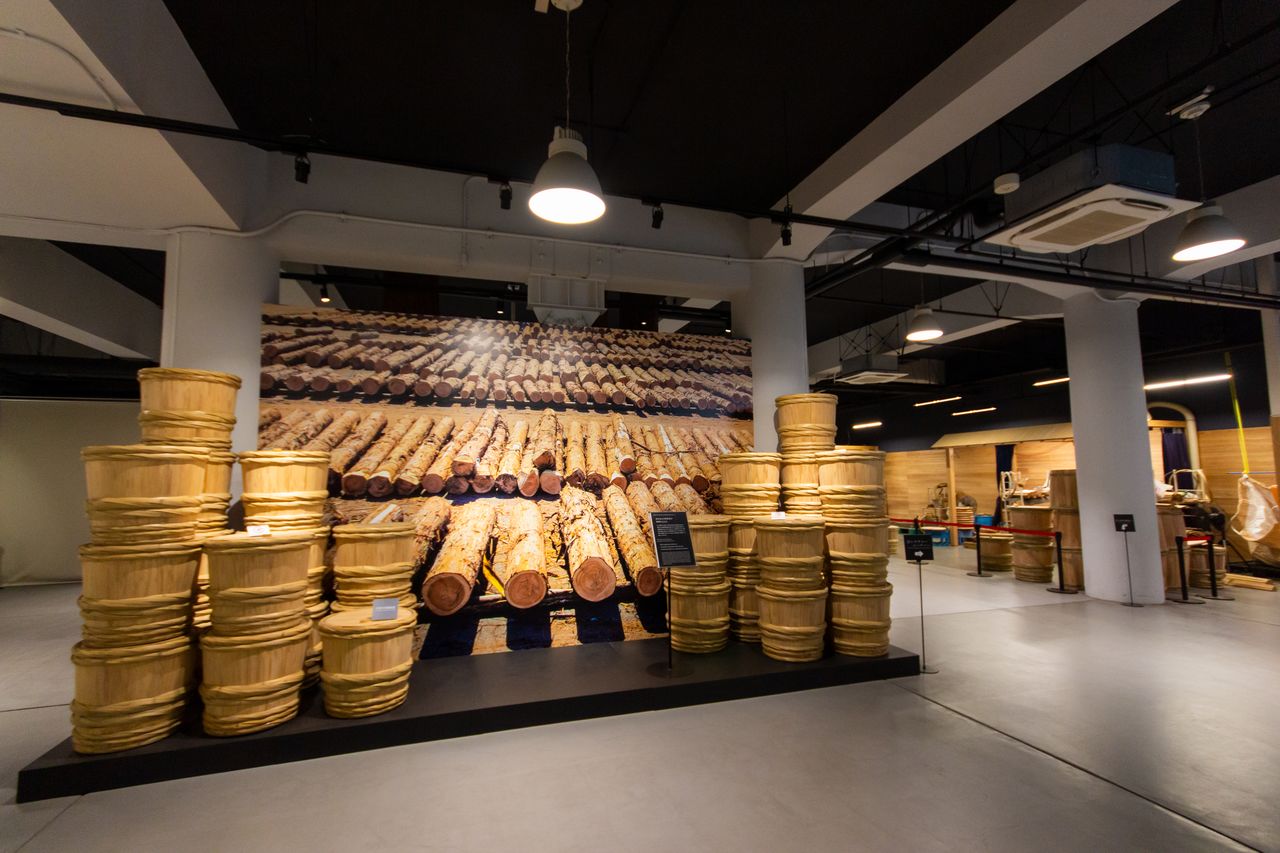 The spacious interior of the Tarusake Meister Factory. To the right is a workshop where workers can be seen making barrels. 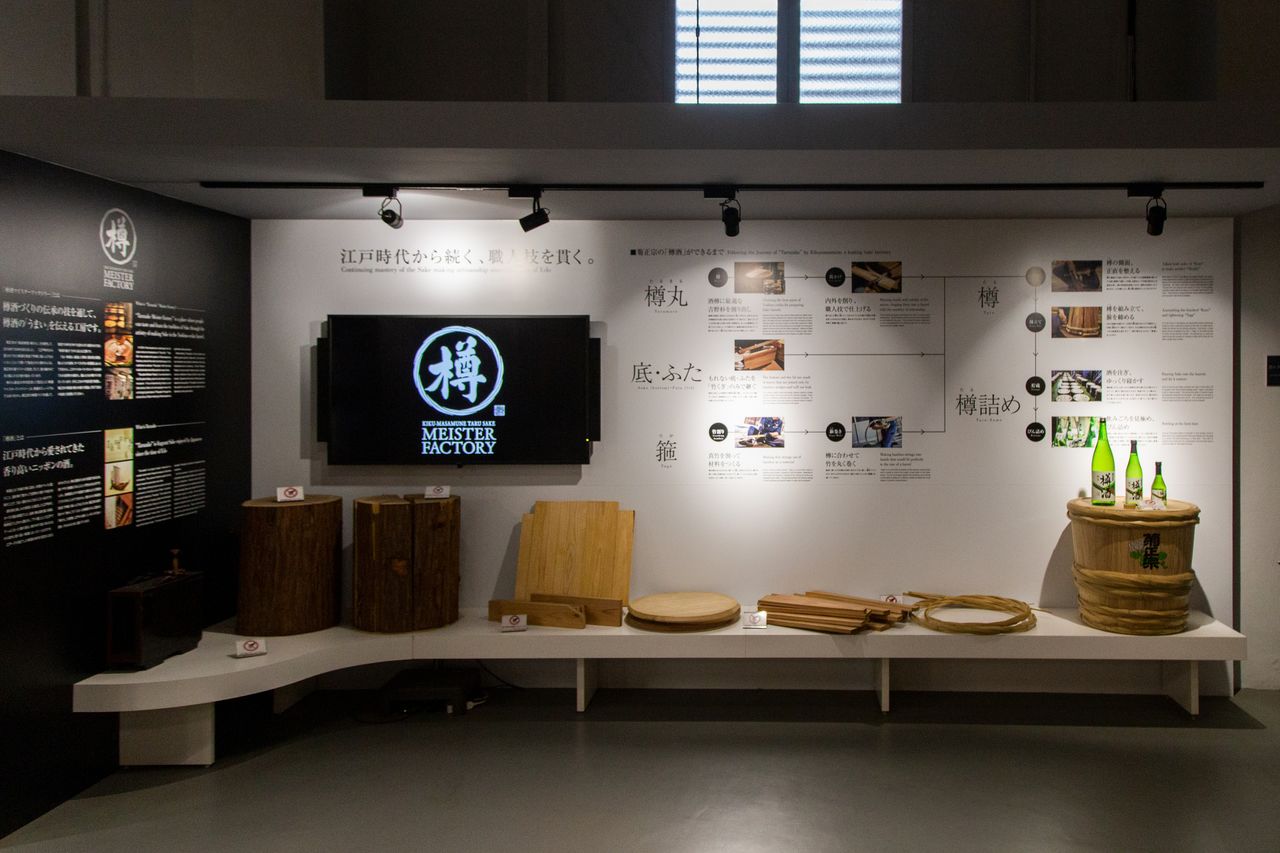 An exhibit describing the various steps of barrel-making.

Sake shops in the Edo period sold the drink from barrels, pouring the sake into containers their customers brought with them. After 1868, as Japan embarked on its modernization phase, sake came to be sold to consumers in glass bottles; nowadays, paper cartons and even single-serving jars are also common. These changes meant a rapid decline in the demand for the old wooen containers, which most people today only see at celebrations involving kagami-biraki, the ceremonial breaking open of a sake barrel, or stacked in rows at the entrance to shrines during festivals. Barrel craftsmen are also few and far between now and the cooper’s craft is in danger of dying out.

“The light scent of sake from a barrel is something quite special even today. Sake from Nada goes especially well with heavy foods, as it refreshes the palate. Kiku Masamune’s Taru Sake lineup is still very popular, so the Tarusake Meister Factory was set up to pass on barrel makers’ skills and acquaint the public with the wonderful qualities of taruzake, the drink as served from a barrel.” 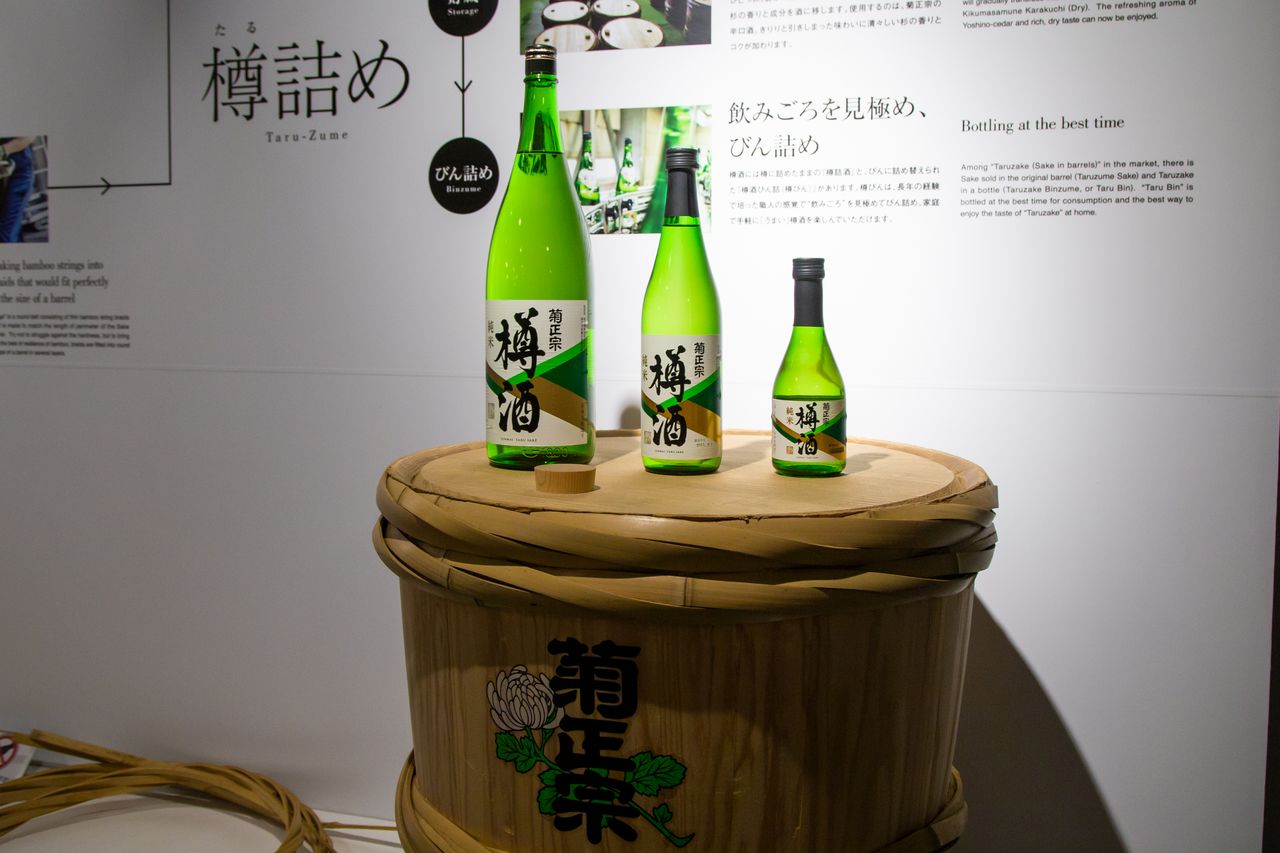 Kiku Masamune’s Junmai Taru Sake is actually stored in barrels so as to pick up the scent of cedar.

In the Meister Factory workshop, workers are busily occupied making the cedar barrels for the Taru Sake lineup, which will be stored in the barrels for 10 days before bottling. You might wonder why Kiku Masamune goes to the trouble of making barrels for its sake when the sake could be scented with cedar by adding pieces of the wood to the liquid. Owing to a peculiarity of Japan’s Liquor Tax Act, the sake would then have to be classified as a liqueur. This is obviously a nonstarter for a sake brewer, so the sake is stored in casks, where it can acquire the cedar scent naturally.

To prevent any untoward smells from transferring to the sake, the barrels use no nails or adhesives. Using a form to hold the pieces in place as they are being assembled, the cooper lines up staves and wedge-shaped bottom pieces to form a cylinder. Next, seven hoops made of woven bamboo are wound around the outside to hold the cylinder in place. Uneven edges are smoothed away, and the barrel is complete when the bottom and the lid are put in place. 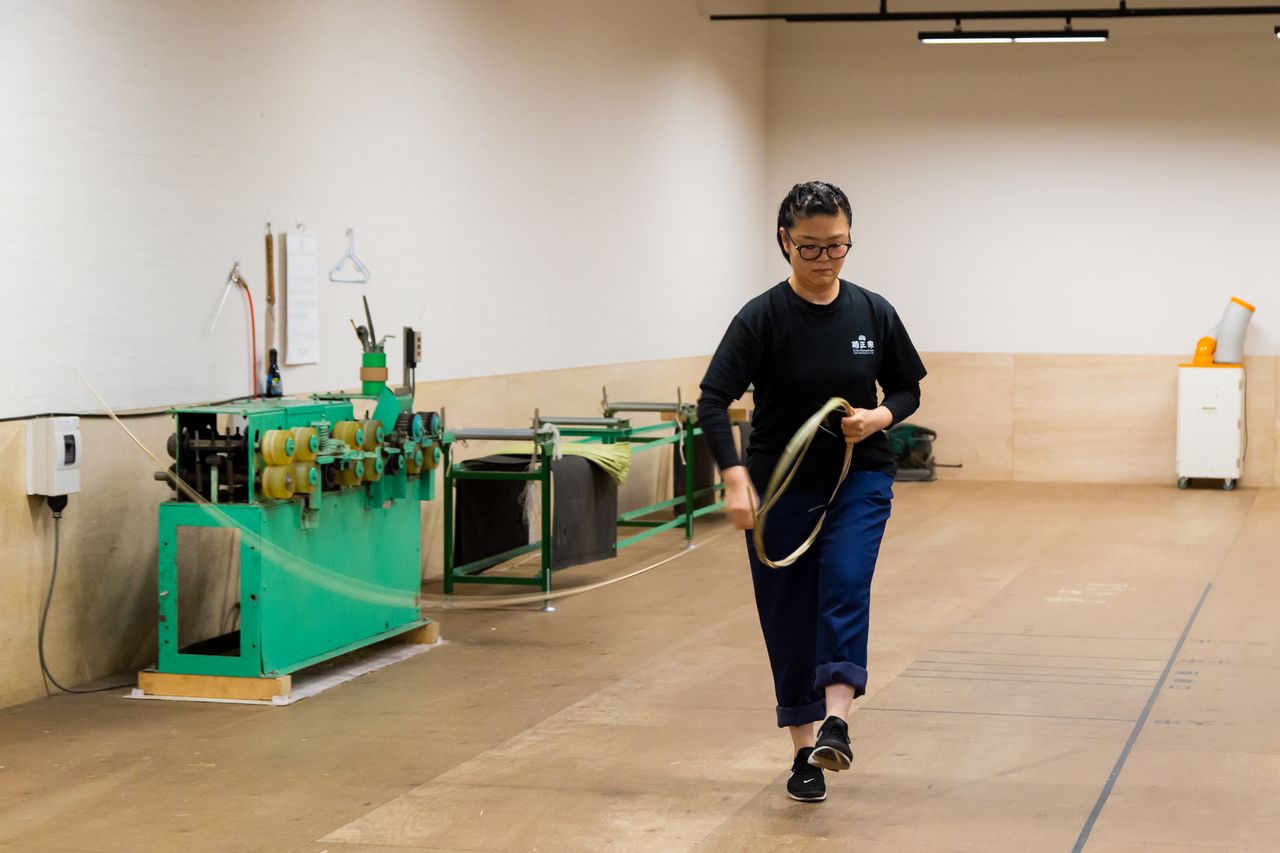 With dance-like movements, trainee Arai Chika demonstrates how to wind the bamboo for making a barrel hoop.

The barrels used for kagami-biraki contain 72 liters, equivalent to 40 1-shō bottles of sake. There are interesting Japanese expressions that supposedly have their roots in sake barrels, such as taga ga yurumu (the hoops are coming loose) or taga ga hazureta (the hoops have come off), with the figurative meanings, respectively, of a lack of discipline or loss of all restraint. One can readily picture sake barrels leaking or falling apart and causing huge losses to brewers. Incidentally, it’s said that it takes nearly 30 years for a worker to learn the craft and become a proficient cooper who can make barrels with hoops that stay tight. 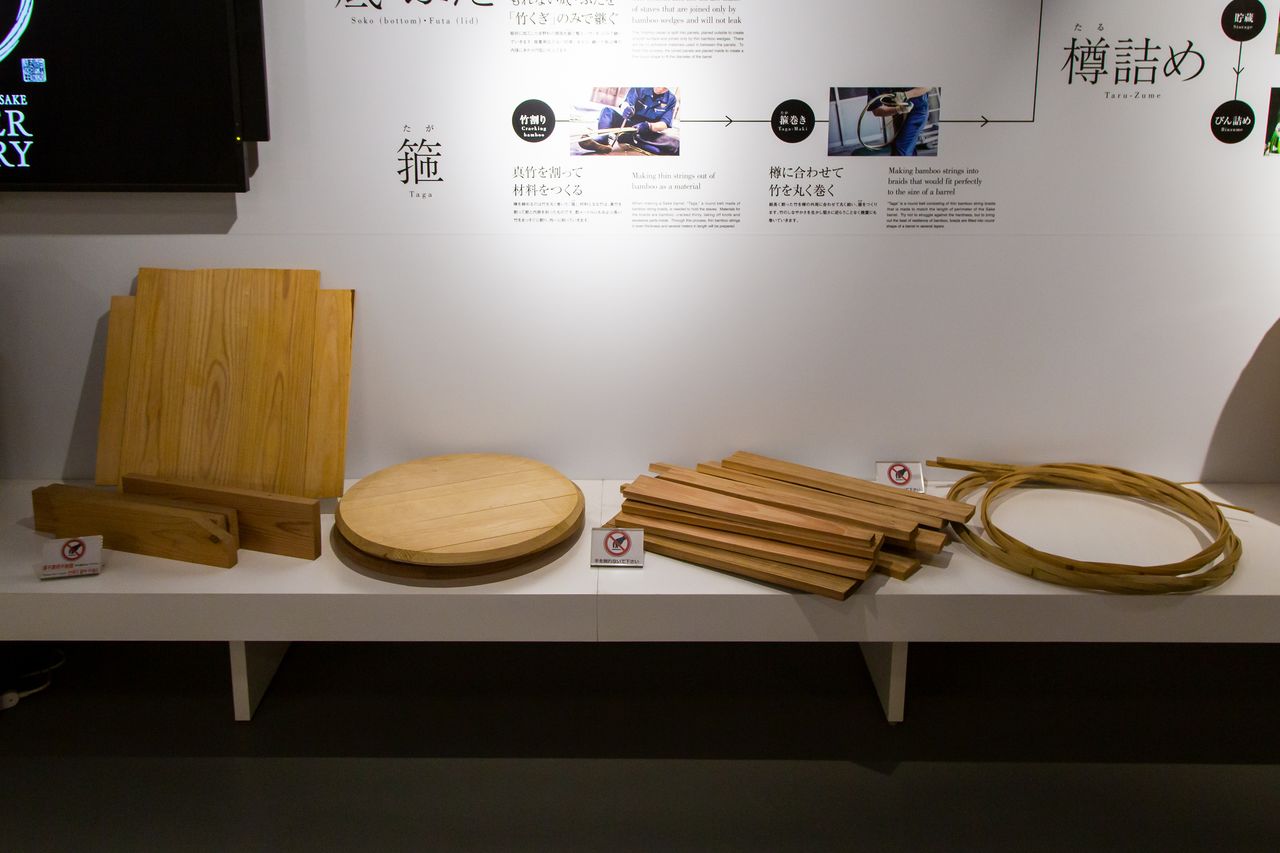 From left, pieces prior to assembly: barrel bottom, lid, staves, wedges, and hoops. 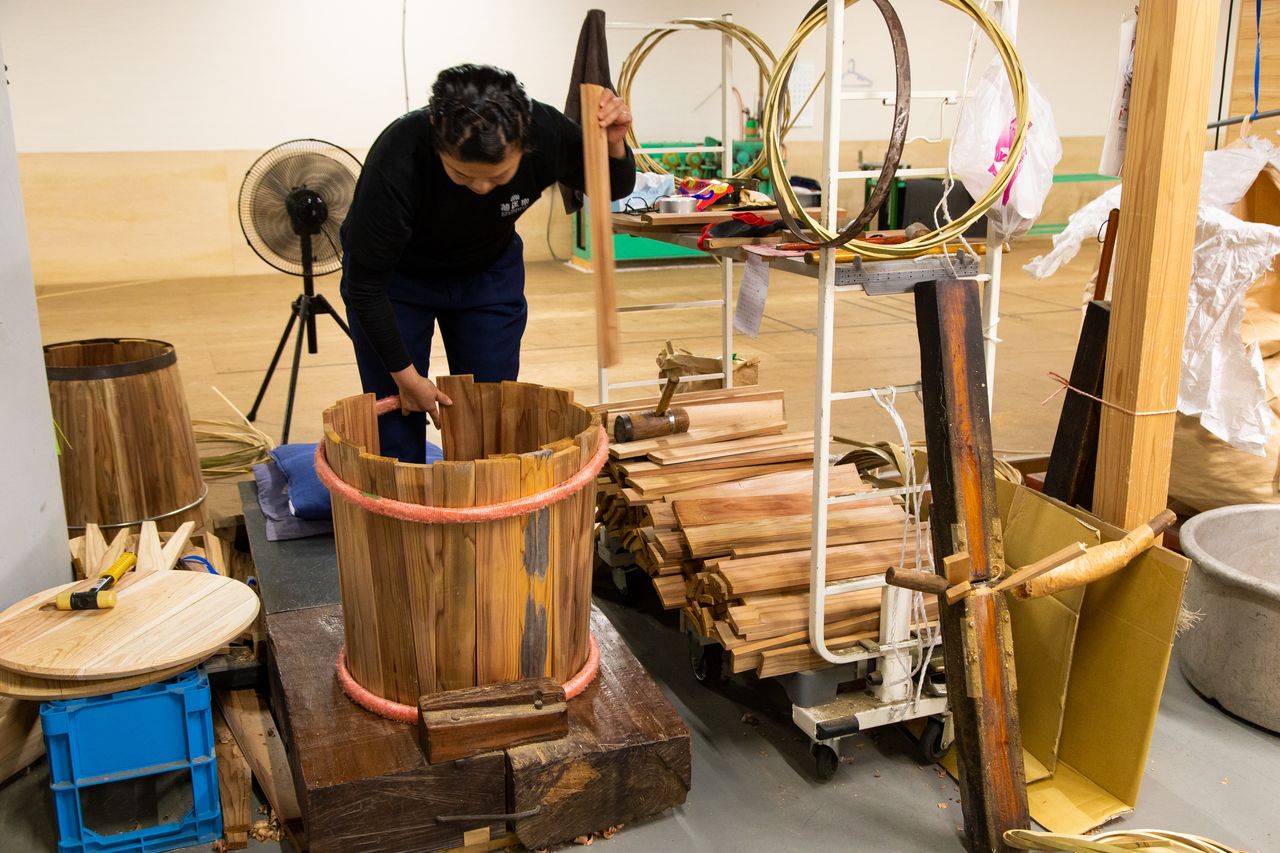 Selecting the staves and wedges and putting them together is like assembling a puzzle. The task can take up to an hour for someone with no previous experience.

The wood used to make barrels, light red cedar from Yoshino, was also painstakingly selected for its scent, which went well with the dry sake of Nada. This wood has low acridity, is fairly knot-free, and its closely spaced growth rings make it less prone to leaking. Today, the sake is stored in barrels for about 10 days, the length of time it took for the beverage to travel from Nada to Edo in centuries past. But in the case of sake, longer aging does not improve its taste. If left too long in the cask, the sake becomes less palatable due to a harsh taste leaching out from the cedar.

This means that sake barrels cannot be reused and must be disposed of after a single use. Some decry this waste of fine Yoshino cedar, but in a sense, the barrels make good use of the wood, since the inner, darker, part of the wood is used for barrel-making, whereas the outer, pale part is in demand as a building material and for furniture-making. 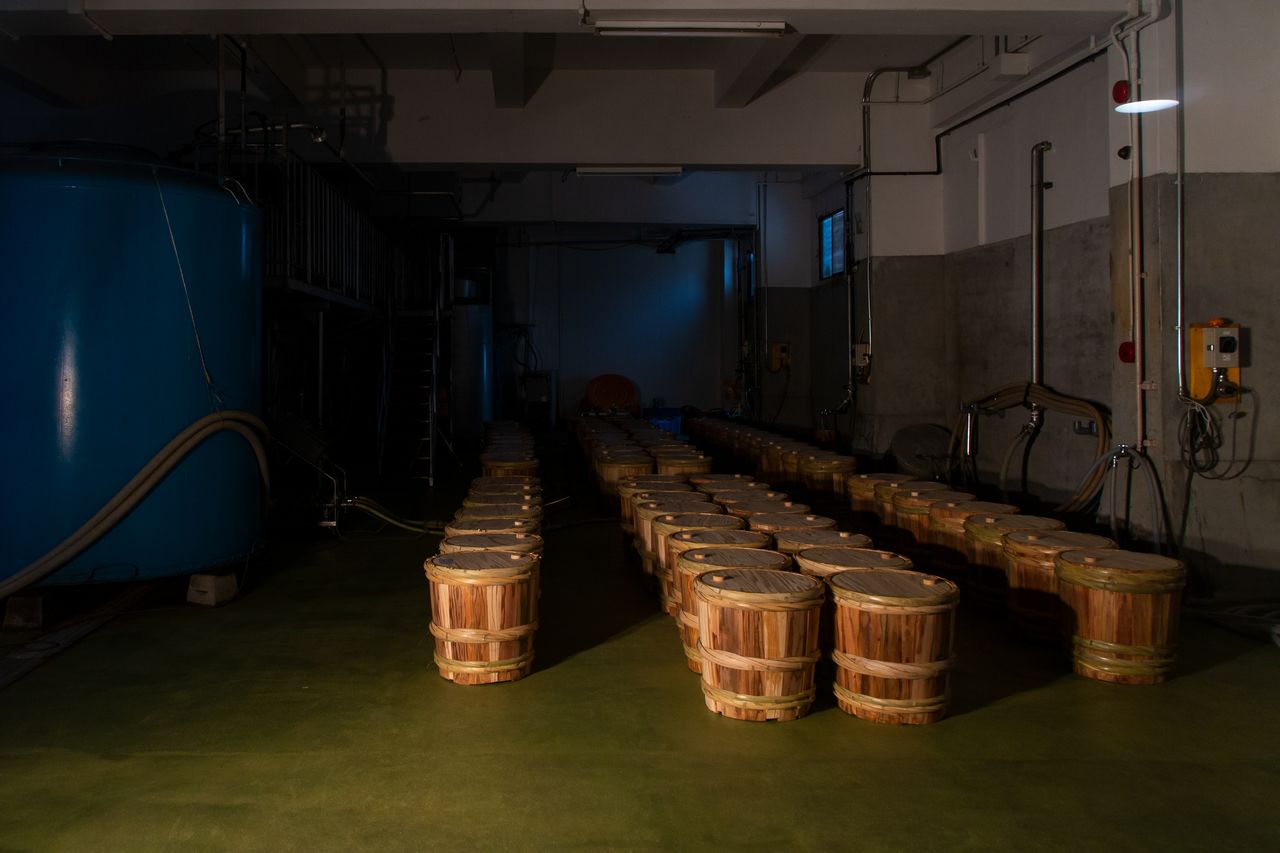 Factory visitors can view barrels imparting their cedar scent to the sake before bottling.

The sake barrels used for kagami-biraki have a covering, usually made of straw nowadays, bearing the maker’s brand name and bound with straw rope. This covering, which was originally woven from dried rice straw, protected the barrels from damage during the sea voyage to Edo. Today, it has a purely decorative function.

“Strange to say, but our Taru Sake lineup is much more popular in eastern Japan, and particularly in Tokyo, than here in Kansai,” adds Gotō. “I suppose that’s a vestige of the DNA of Edo people who loved kudarizake,” he laughs. 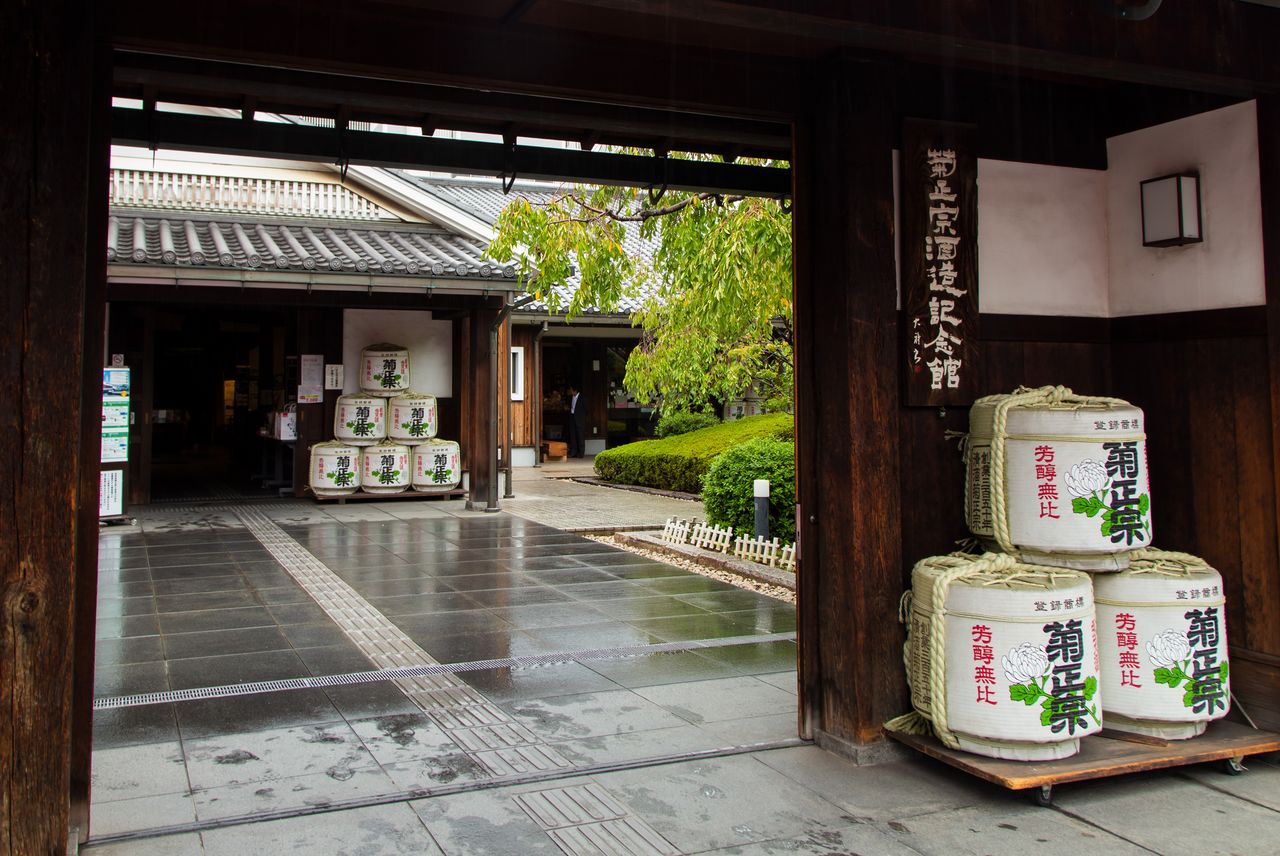 Barrels wrapped in decorative coverings at the entrance to the Kiku Masamune Sake Brewery Museum.