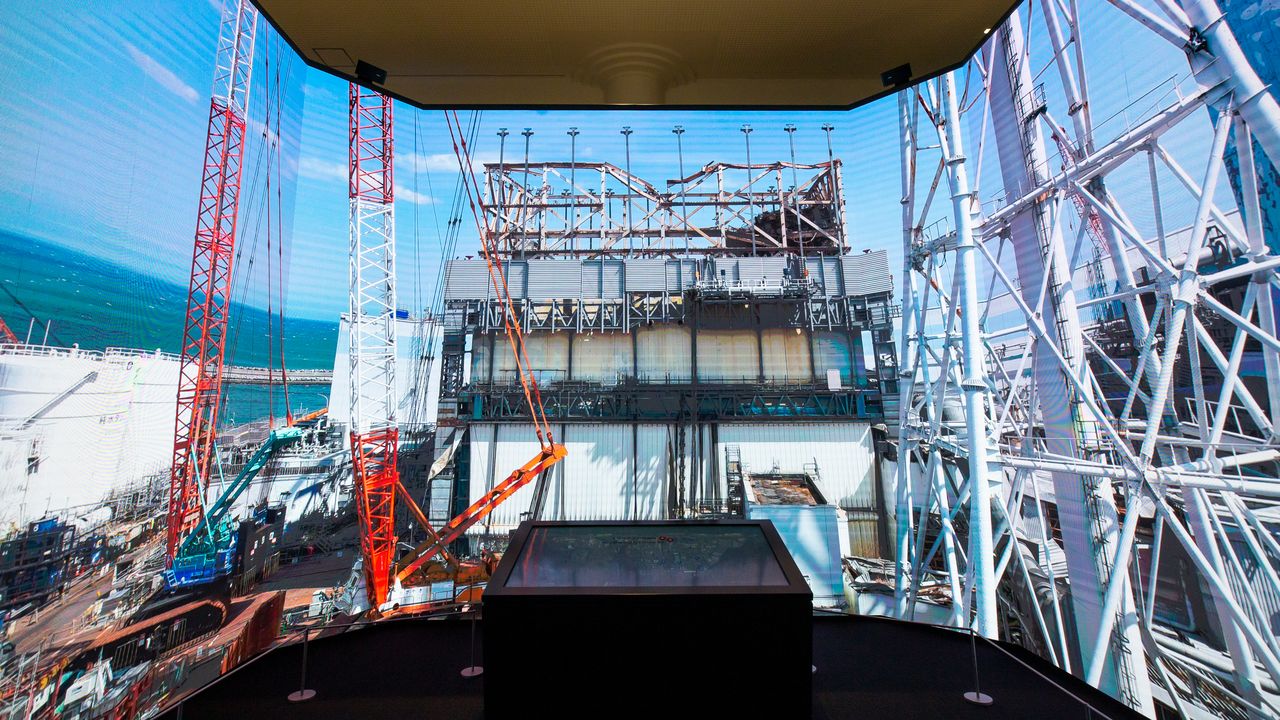 Recording the Past and Communicating the Present: Fukushima Daiichi’s Archive Center

Guide to Japan Disaster Society Economy Jun 5, 2020
The TEPCO Decommissioning Archive Center was established to preserve the memories and records of the nuclear accident at Fukushima Daiichi Nuclear Power Station, and to share the remorse and lessons learned, both within TEPCO and with society as a whole.

TEPCO has established a Decommissioning Archive Center in the town of Tomioka, located approximately 10 kilometers from the Fukushima Daiichi Nuclear Power Station on the northern Pacific coastline of Fukushima Prefecture. It was opened on November 30, 2018, to recount the unfolding of the nuclear accident caused by the tsunami brought by the 2011 Great East Japan Earthquake, as well as the official response. Furthermore, it presents the plans and progress of the power station’s decommissioning. The center aimed to attract 20,000 visitors a year, but after one year, the number had already exceeded 50,000. By February 2020, the number reached 58,000, including 1,400 visitors from overseas.

Many nuclear power stations have facilities designed to promote their benefits and safety to local residents and other visitors. The Decommissioning Archive Center was developed in a facility that formerly housed the Energy Museum promoting Fukushima Daini Nuclear Power Station, straddling the towns of Naraha and Tomioka, and was popular with locals. The Great East Japan Earthquake brought the myth of nuclear power station safety crashing down. The center has now been reborn as a forum to caution against arrogance and overconfidence. 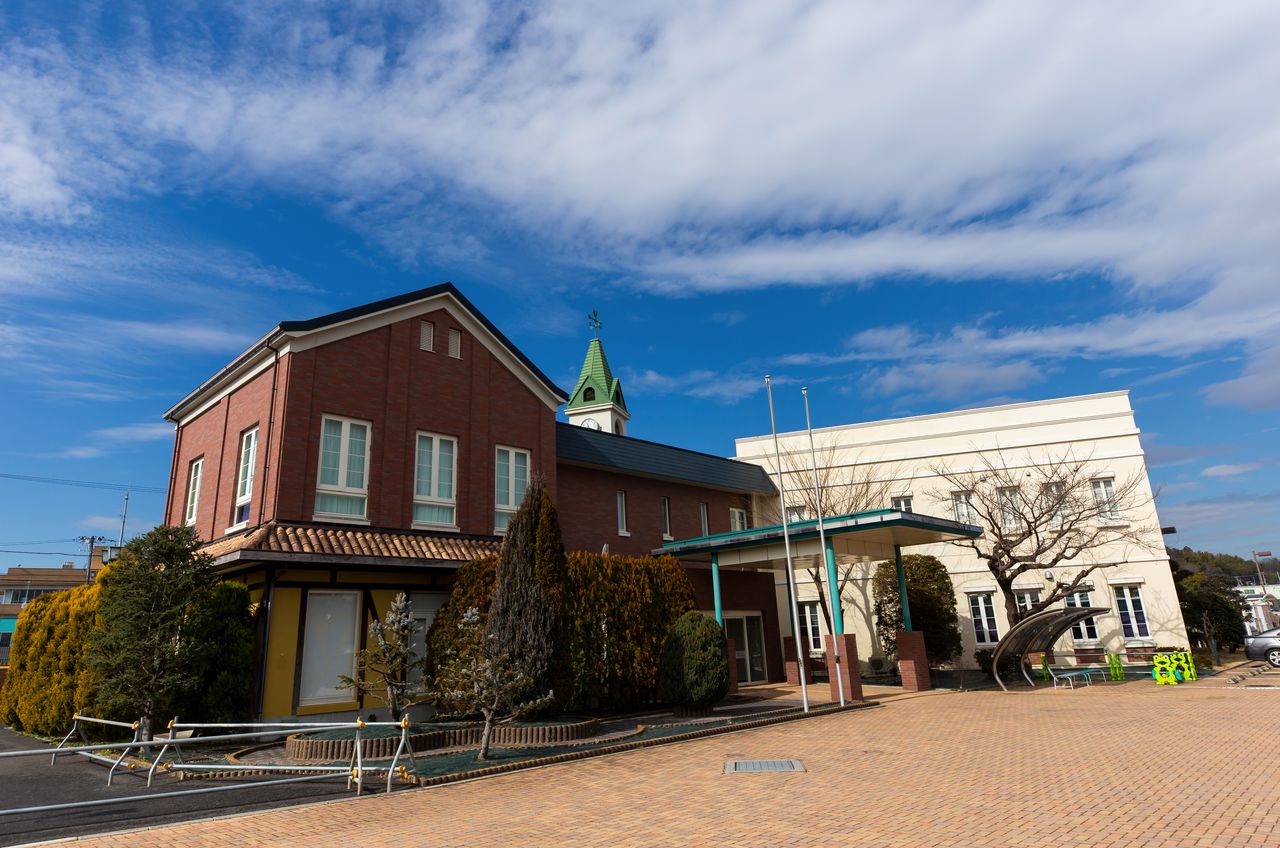 The Decommissioning Archive Center, housed in the former Energy Museum that used to promote the Fukushima Daini Nuclear Power Station. 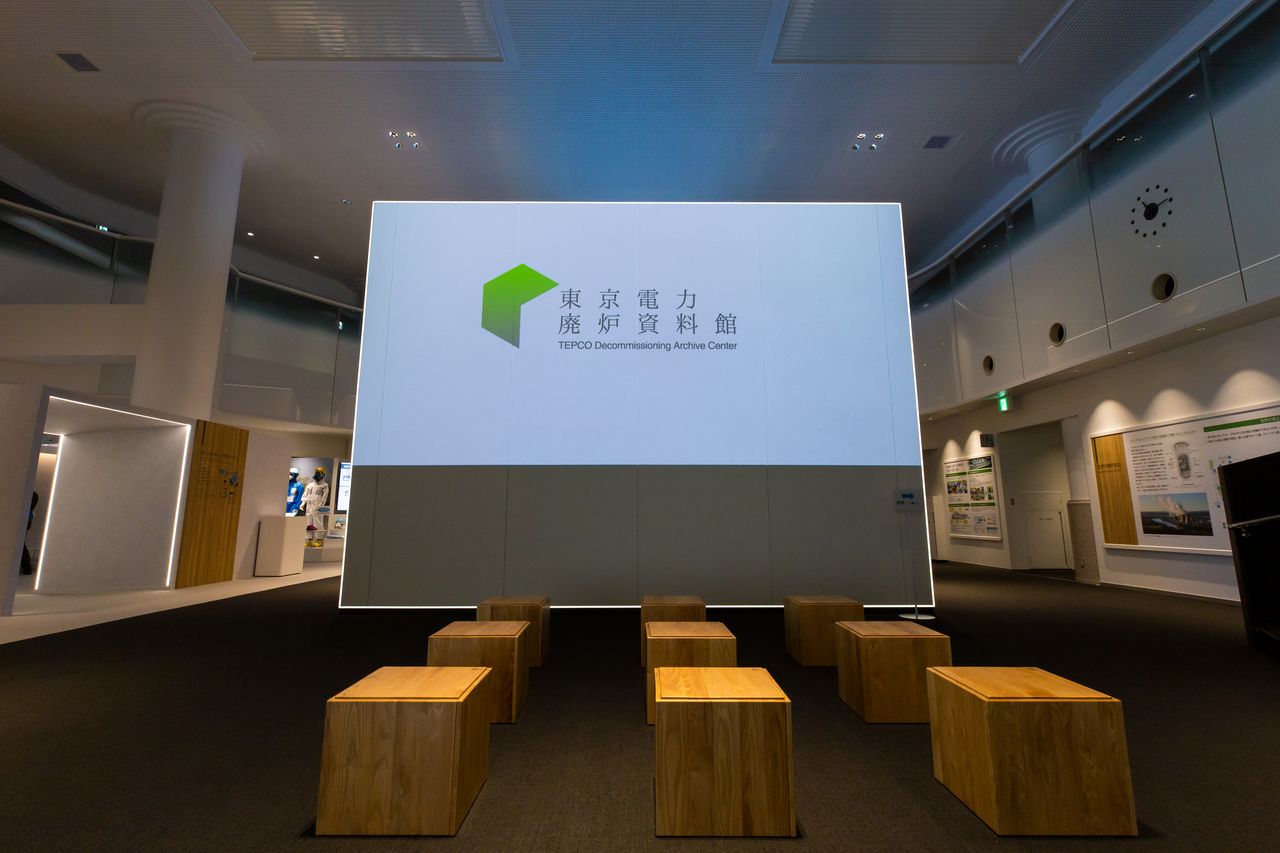 The center features a theater, large-screen monitors, and 3D videos to deliver a greater sense of realism.

The entrance features a message from Kobayakawa Tomoaki, the president of TEPCO, that ends: “We will remember the reflections and lessons from the accident and pass on our insights to the next generations. We are committed to completing the decommissioning and restoration process. It is for this determination that we are operating the TEPCO Decommissioning Archive Center.”

Visitors proceed to the second floor, entering a zone entitled “Memory and Record/Reassessment and Lessons,” including an installation recalling the exact moment when the 2011 earthquake struck. Next, the Theater Hall shows various media footage from the time, revisiting how the earthquake and tsunami led to the occurrence of the nuclear accident and showing the response taken at the nuclear power station. 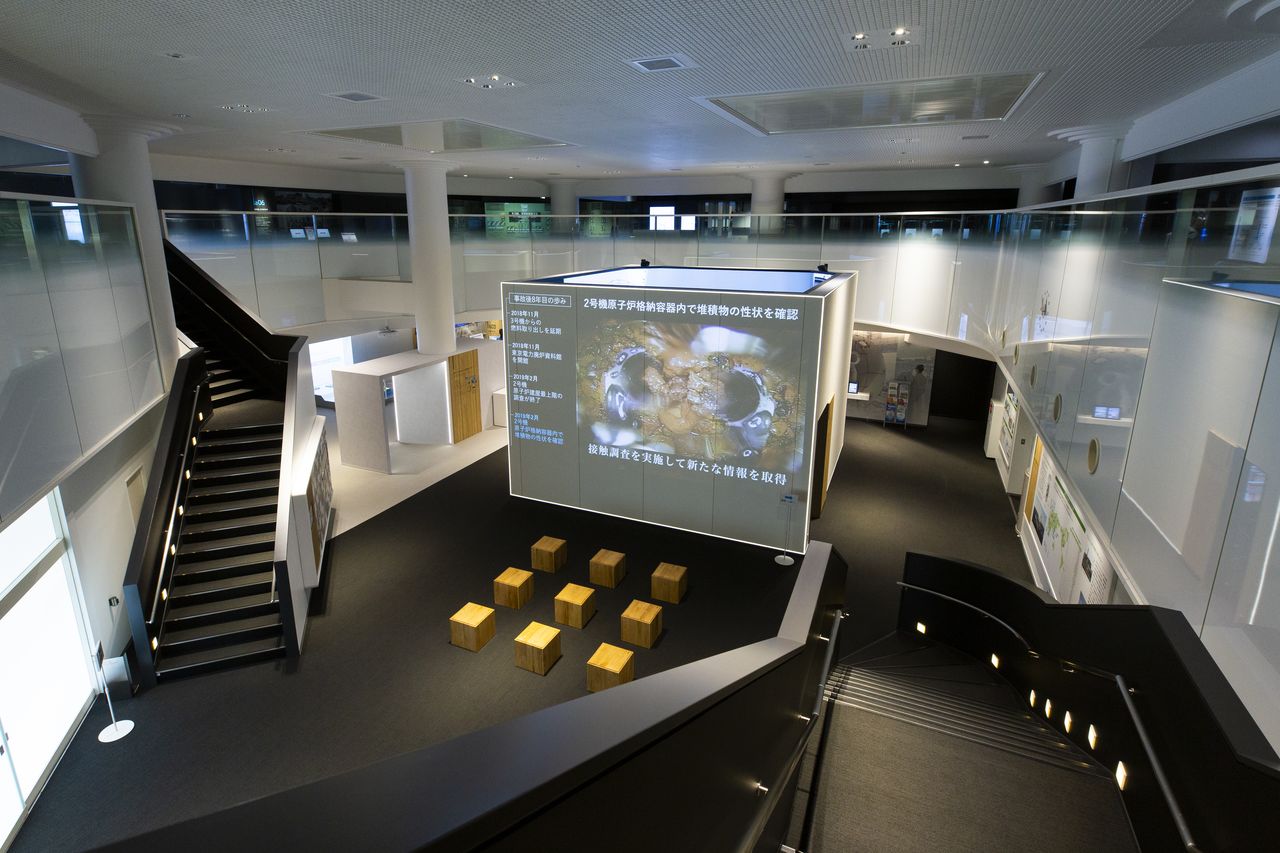 The “F-Cube” installation, in the center of the ground floor, shows the interior of Fukushima Daiichi Nuclear Power Station on giant monitors. 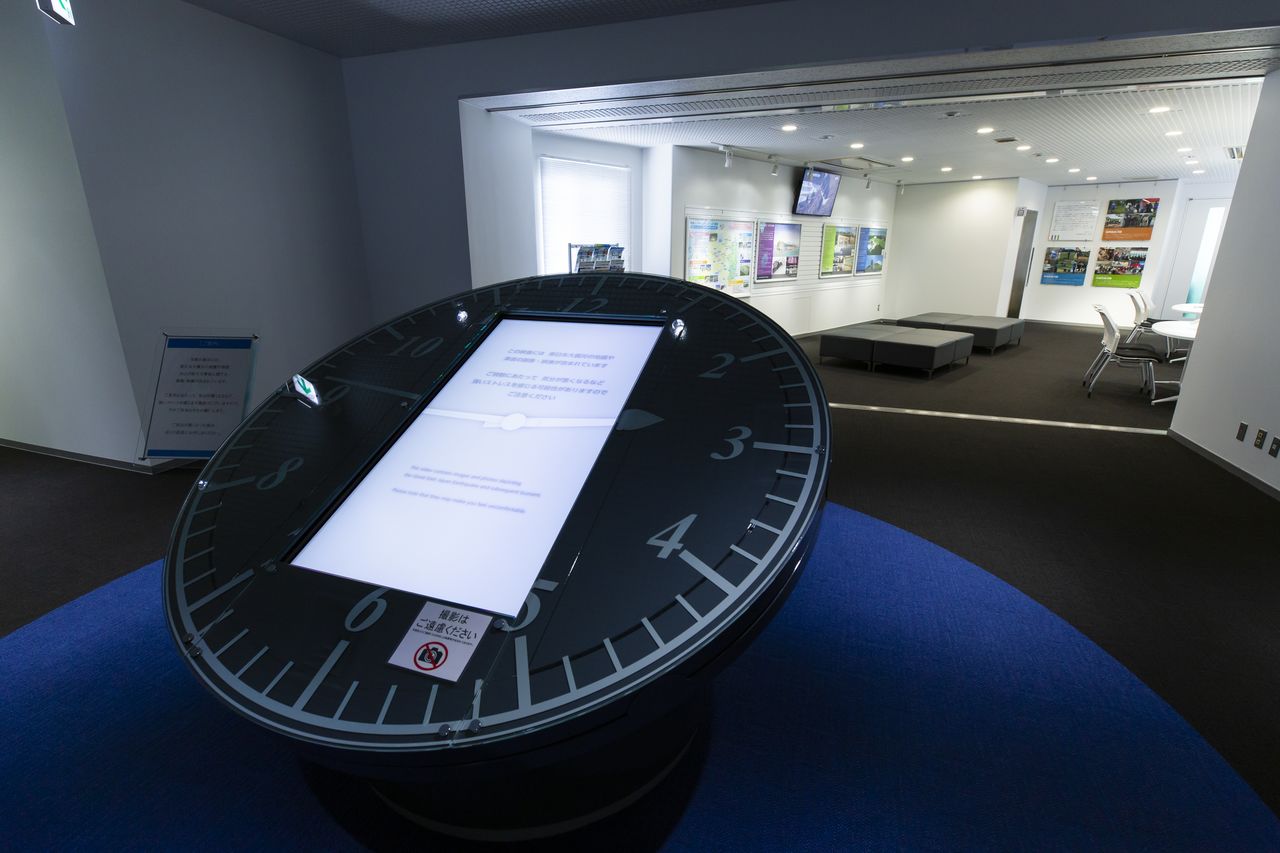 “Remembrance of 3.11” permanently displays the time 2:46 pm, when the Great East Japan Earthquake began. Monitors display damage caused by the earthquake and tsunami. To the rear is an information space, the Revitalization Gallery. 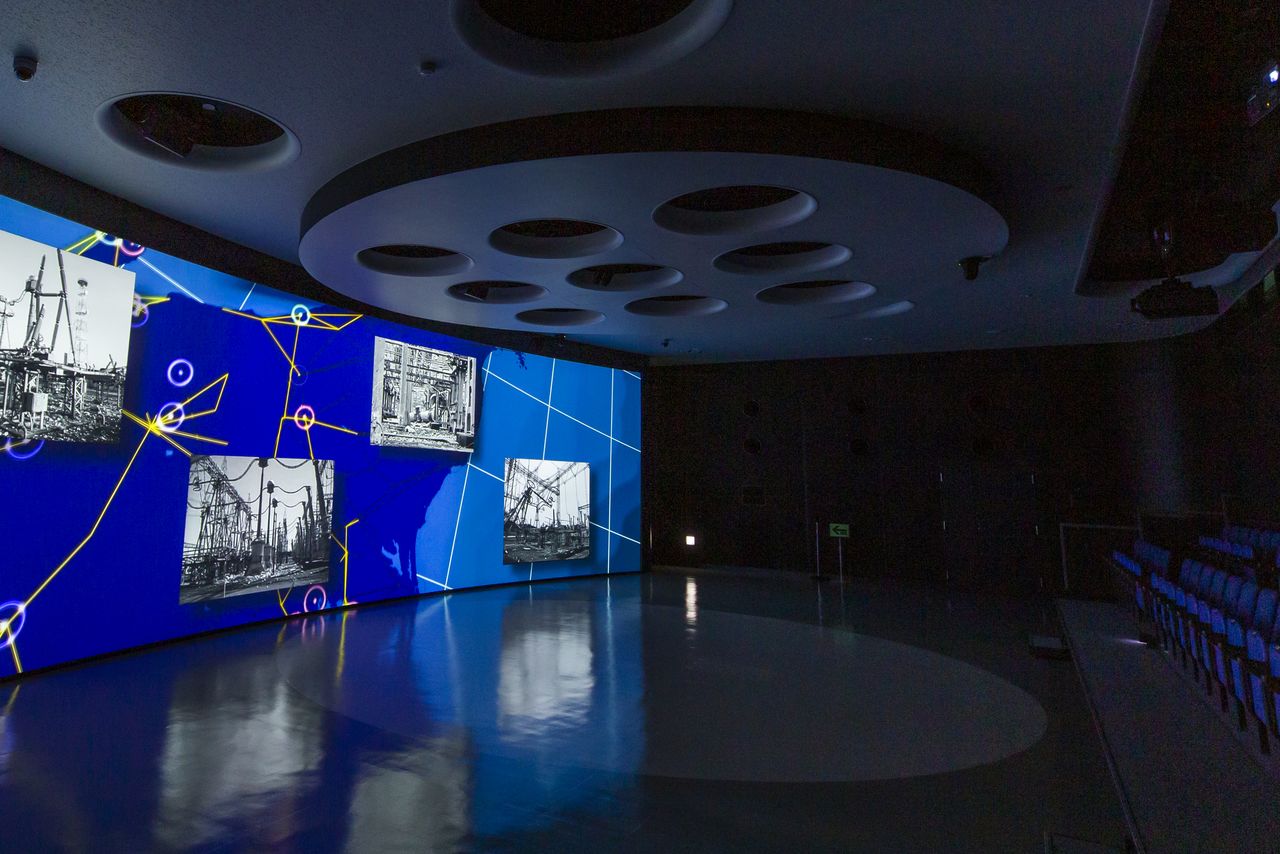 The interior of the Theater Hall features an elaborate set-up projecting video footage onto the floor.

After exiting the theater, visitors pass by a display of items and footage that together elaborate how the accident unfolded in Units 1 to 4 of the power plant, along with how Fukushima Daini Nuclear Power Station managed to avoid catastrophe, despite also losing power.

One installation, entitled “In the Main Control Room at That Time,” shows a realistic reconstruction of events on the front line. It was filmed at Fukushima Daini training facilities, with TEPCO employees performing the roles. In another display, “From That Day, March 11, to Now,” employees who were involved in the accident response recount the circumstances at the time and discuss their thoughts from the time of the accident until today. 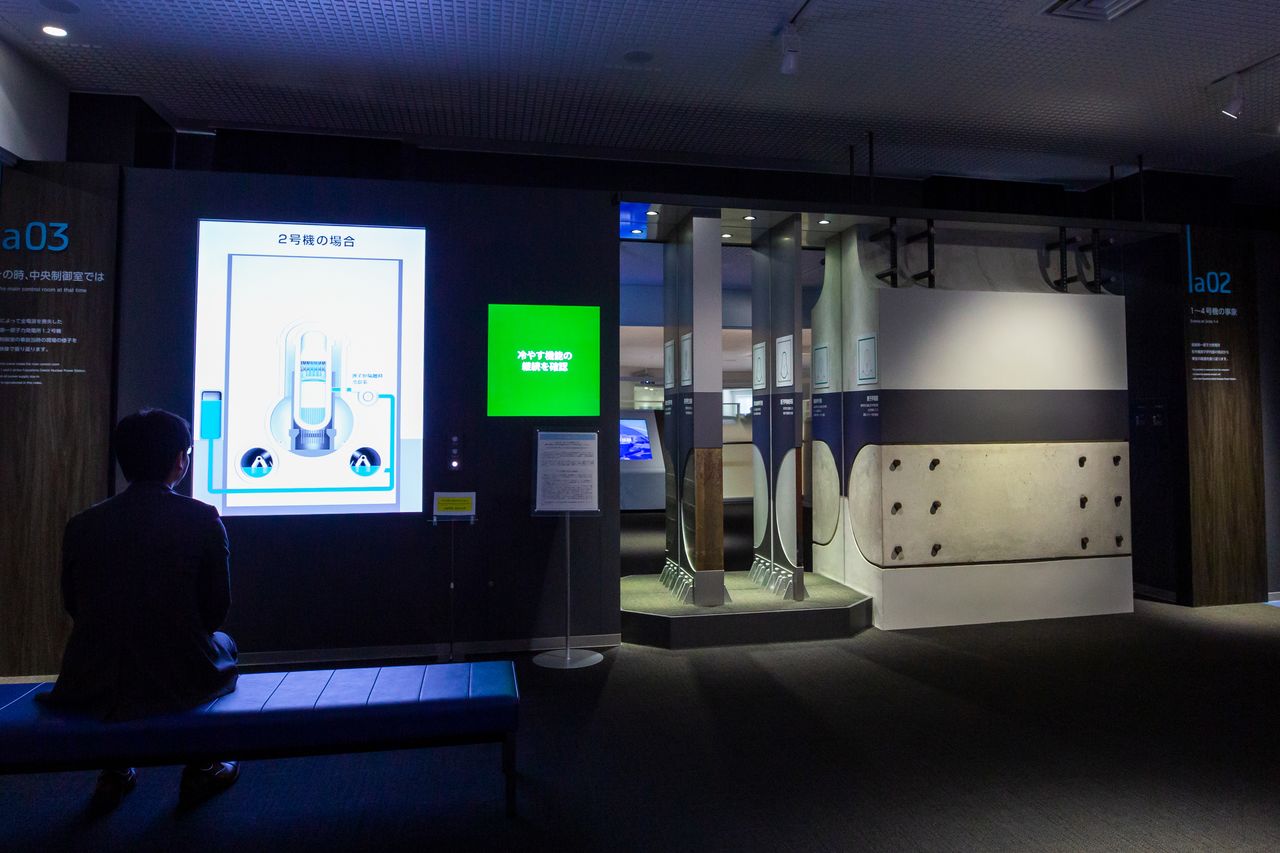 An exhibit of the development of the accident in Units 1–4. The reinforced concrete on the right-hand side is 1.6 meters thick—an accurate reproduction of the atomic reactor wall. 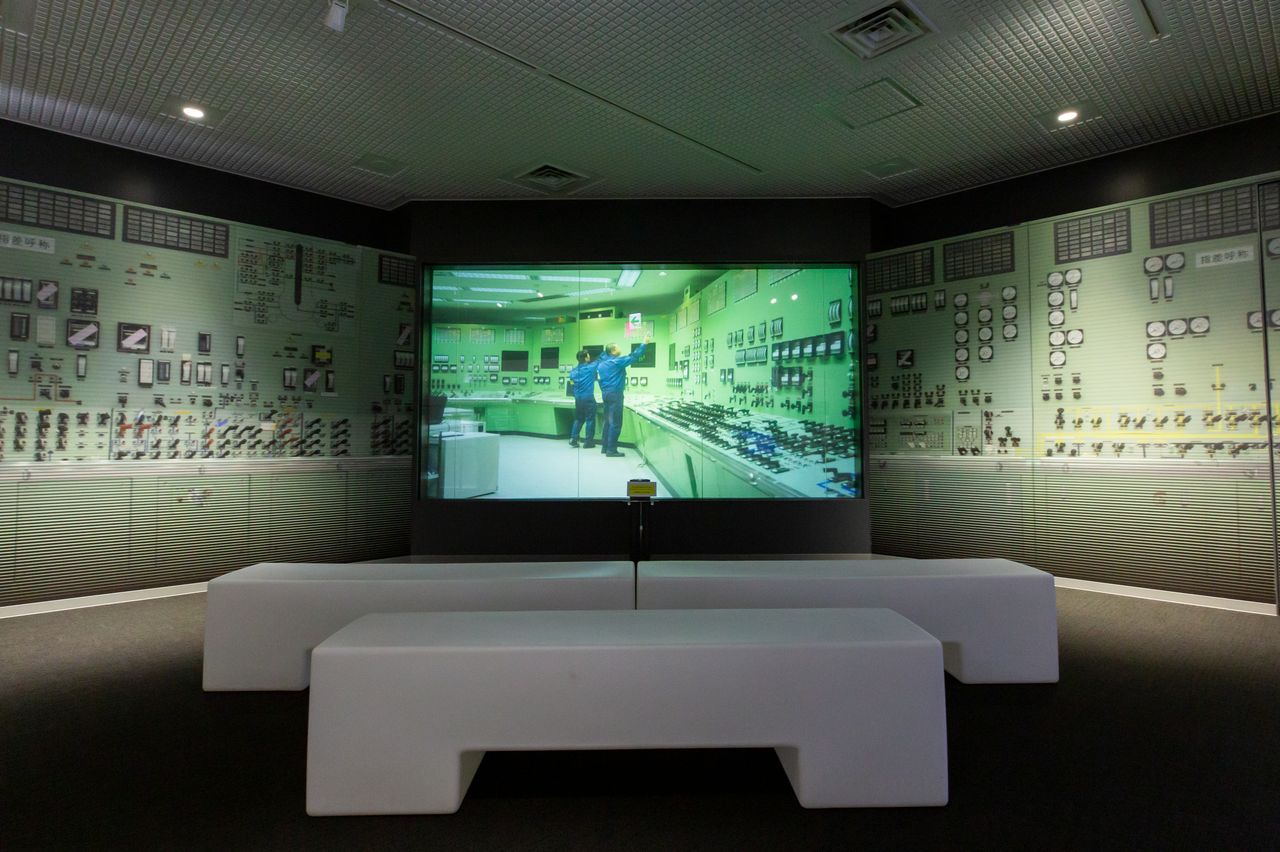 “In the Main Control Room at That Time” is a reconstruction of the station’s control room as it was when the accident took place. 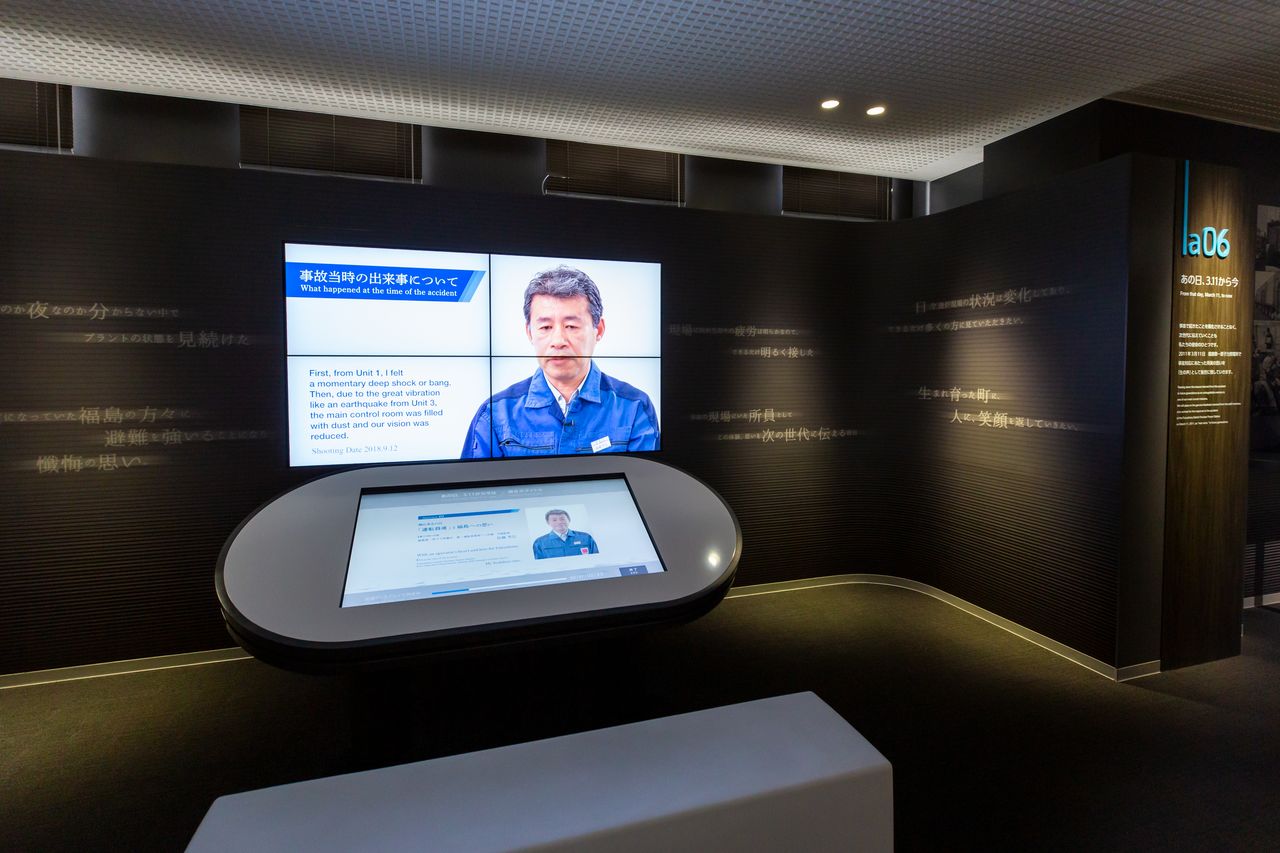 “From That Day, March 11, to Now” gives visitors the chance to hear employees recount their experiences at the accident site.

A Long and Challenging Path

“Situation at the Decommissioning Site” is a section that explains both the current state of Fukushima Daiichi and the progress of the reactor’s decommissioning. In the center of the floor stands the “F-Cube,” a 4.6-meter high, 6.5-meter wide installation, containing three large monitors in a U-shape that screen the work inside the station from the viewpoint of workers, who perform their tasks surrounded by rows of tanks containing water processed to remove radioactive contaminants.

The “Fuel Removal and Fuel Debris Removal” section has a PMORPH robot, used to survey the interior of the reactor’s primary containment vessel, on display, and projects CG footage of its work on the floor. The “Introduction to Technological Development and Research Institutes” display lets visitors experience a 3D simulation of the interior of a nuclear reactor and uses the latest technology to explain the operations inside. 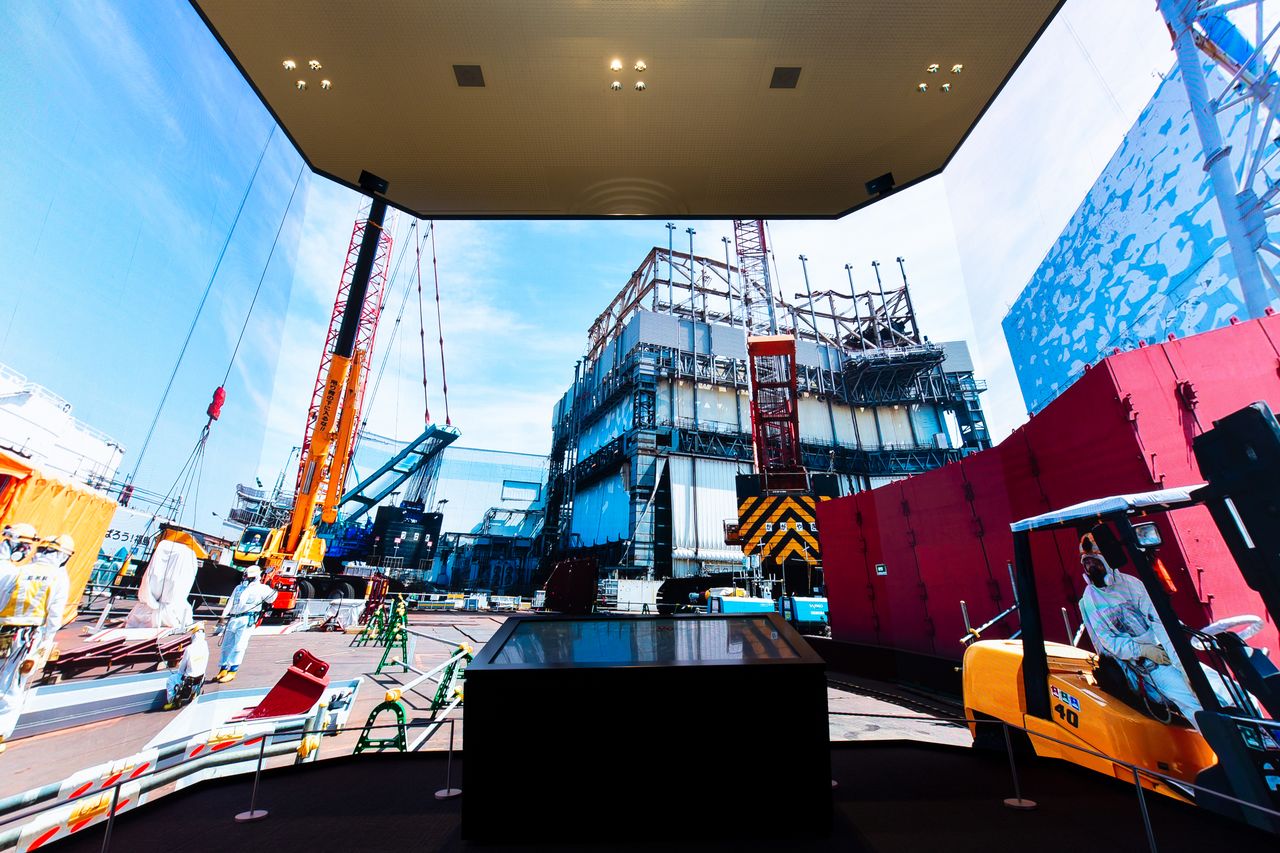 The three large monitors inside of the “F-Cube” installation give a vivid picture of the work around Unit 1 of the reactor, which suffered violent explosions. 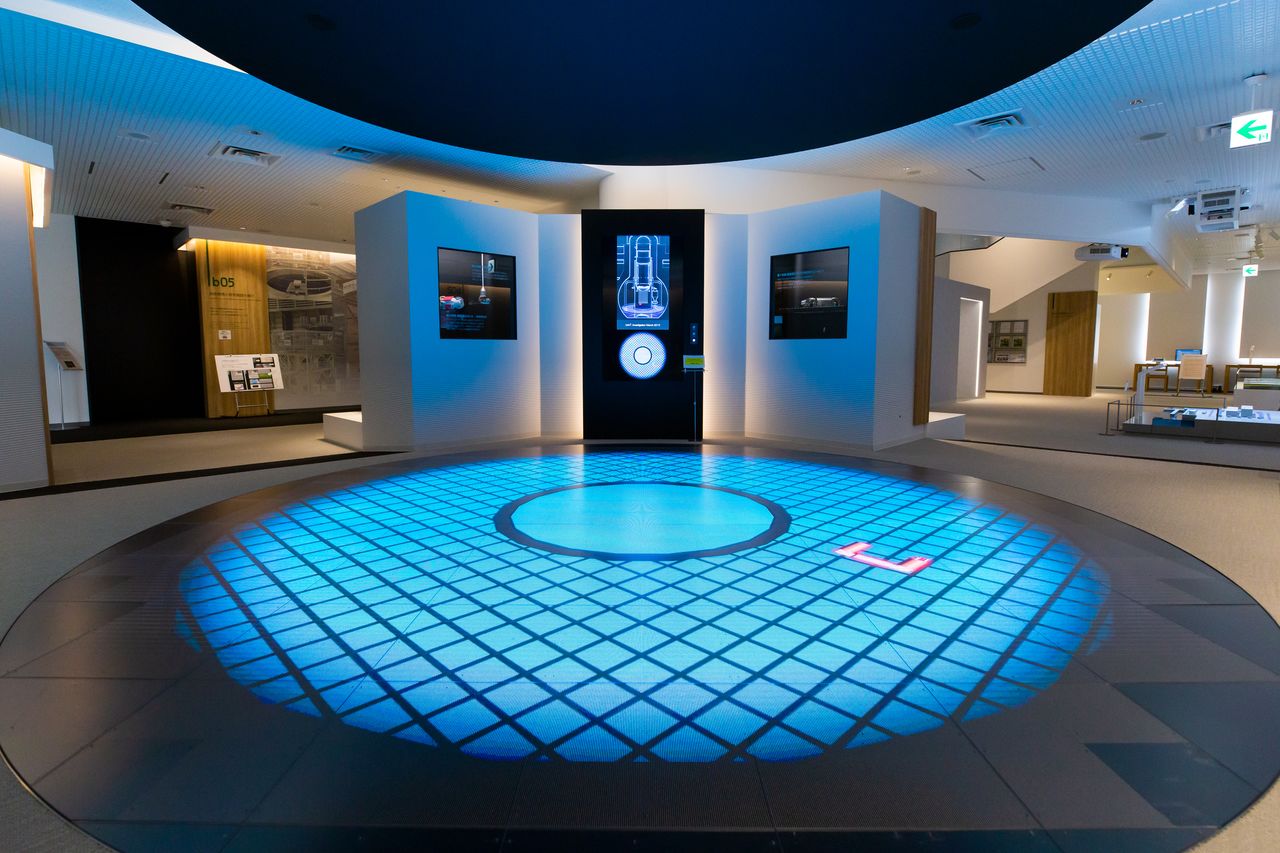 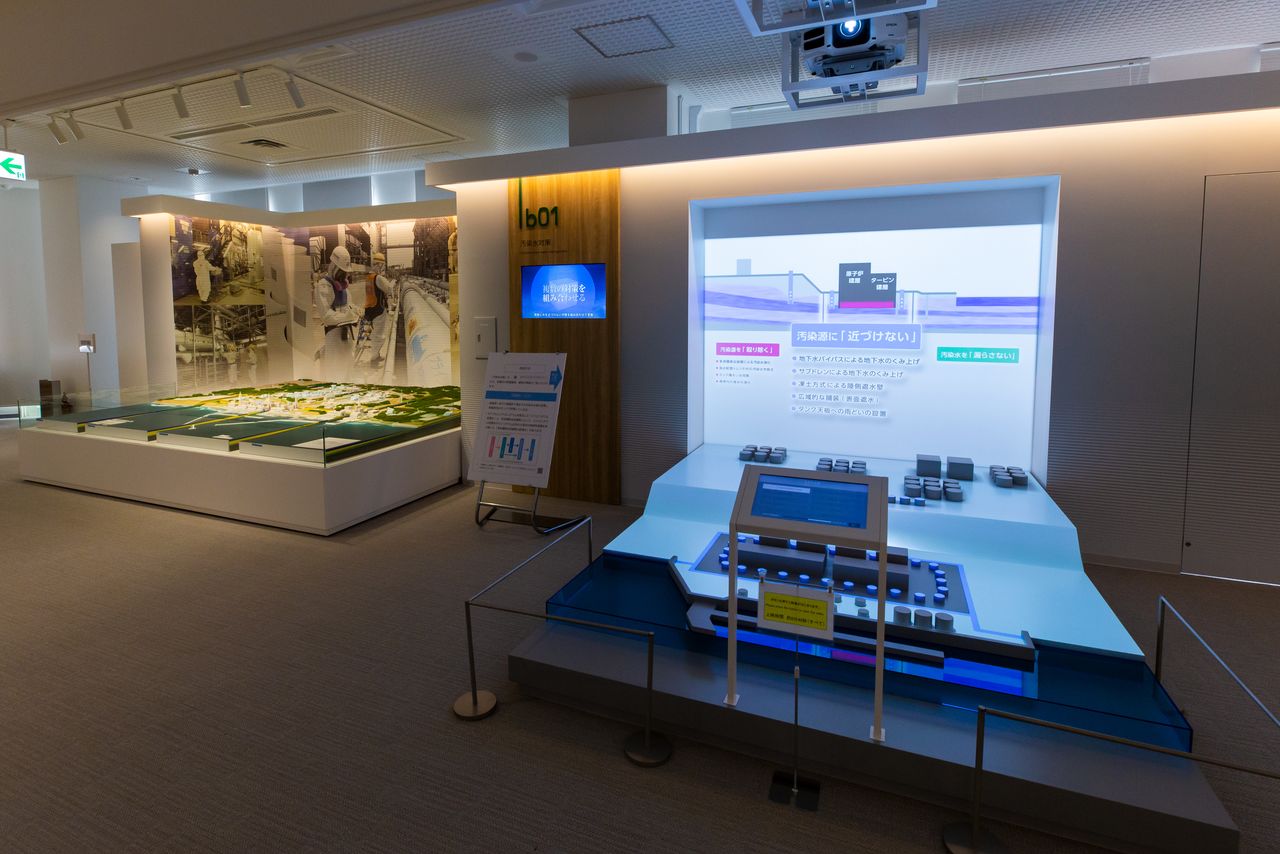 “Contaminated Water Management” is a detailed georama of the reactor precinct together with a model synchronized with video footage.

The “Improvement of the Labor Environment” section shows the significant improvement in work conditions at Fukushima Daiichi, where radiation levels have fallen to a level where work can be performed in regular wear on 96% of the grounds. Meanwhile, “Mid- and Long-Term Roadmap for the Fukushima Daiichi Nuclear Power Station” gives a strong impression of the long road ahead. The Japanese government and TEPCO have said it could take as long as 40 years for the reactor to be decommissioned, but there have already been significant delays in the removal of the atomic fuel, and processing the ever-increasing volume of contaminated water is a major challenge.

The Decommissioning Archive Center only shows the perspective of TEPCO, which was responsible for the lack of preparations that enabled the accident, and its decommissioning efforts. Many who suffered as a result of the nuclear accident and those still forced to live in evacuation accommodation likely have a very different view of the events.

But for the many people who live farther from the accident site and for whom the memory of the disaster, now nine years ago, may be fading, a visit to the center is worthwhile—reminding them of that terrible day, and of the impact it had on the nation. Those responsible for the decommissioning work in the future may be too young to remember the Great East Japan Earthquake and the nuclear power station accident, making it all the more important to share the story, together with the company’s reflections on its responsibility and the lessons learned. 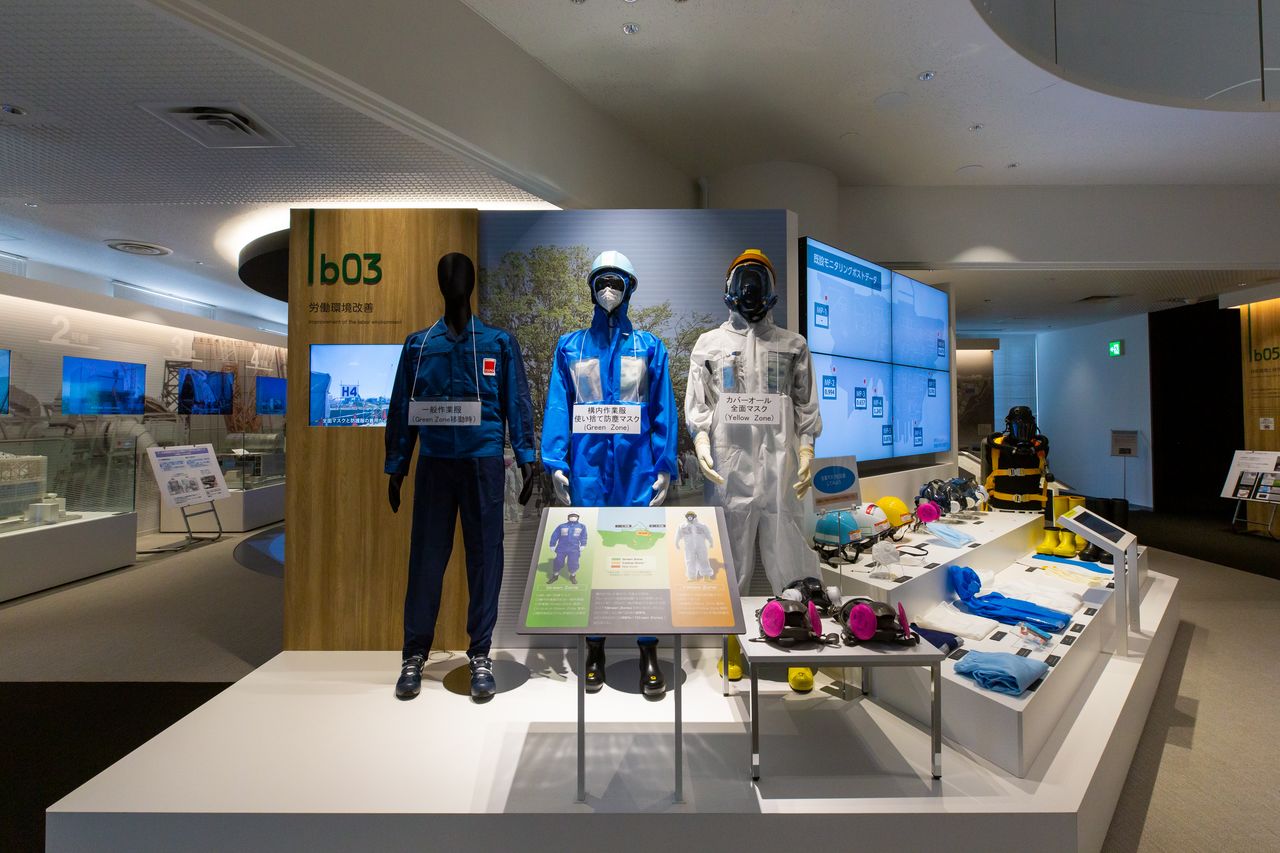 An exhibit of actual equipment used by the workers, with general, nonprotective work-wear at left. 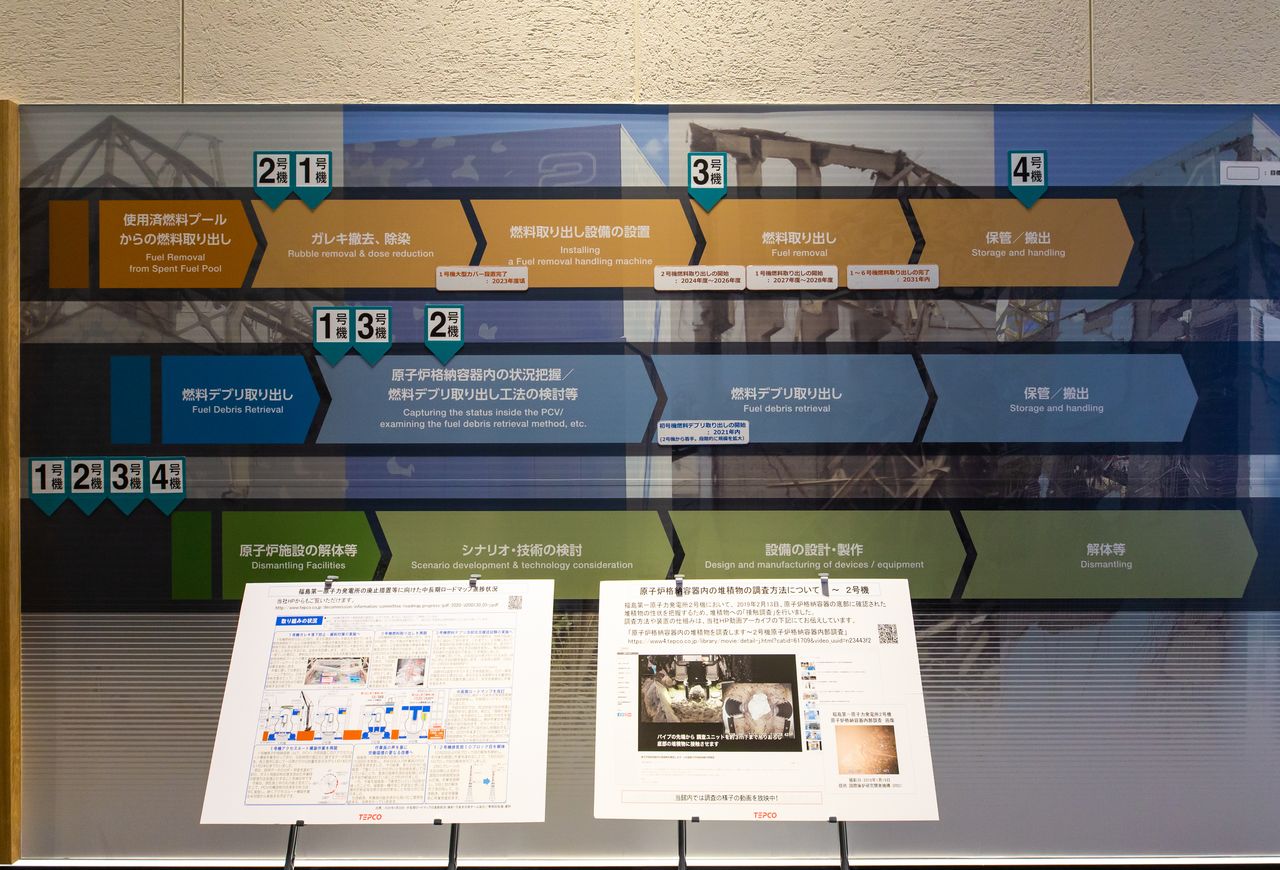 “Mid- and Long-Term Roadmap for the Fukushima Daiichi Nuclear Power Station” shows the progress of work in each reactor unit. Visitors will no doubt gain a sense of the long journey ahead for decommissioning.