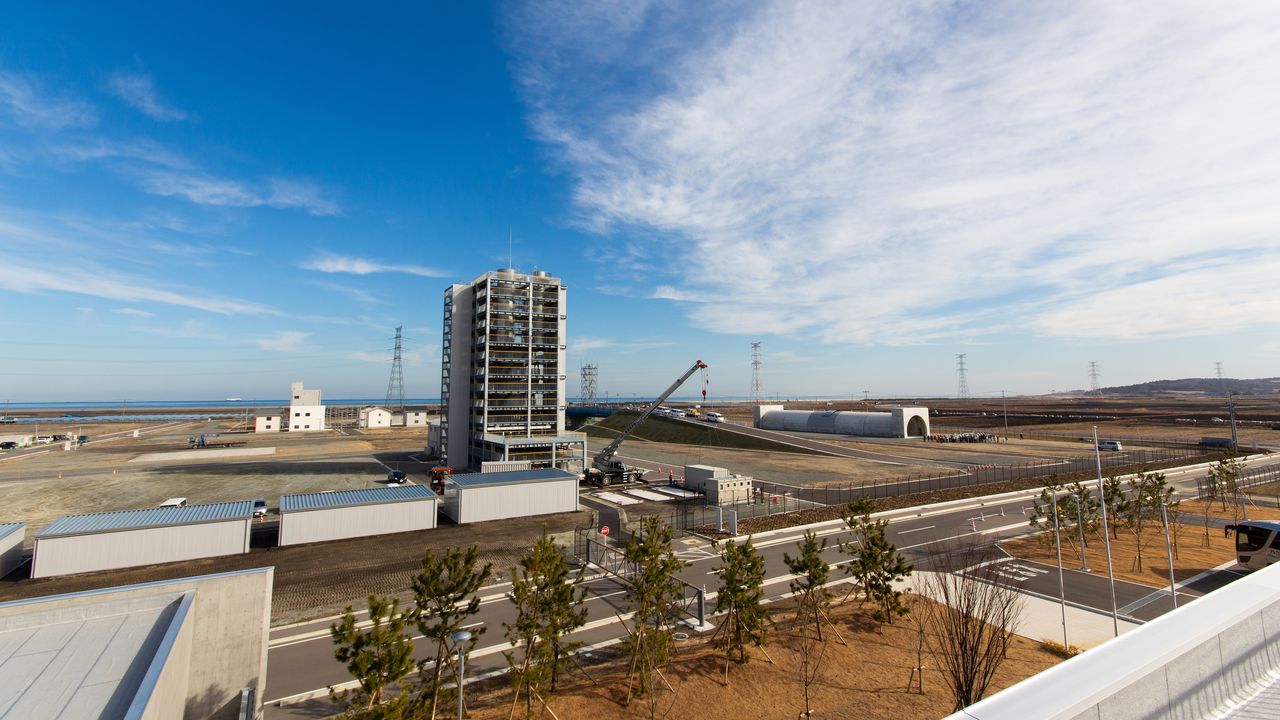 Travel Disaster Society Economy Apr 24, 2020
Fukushima Prefecture was devastated in the earthquake and tsunami of 2011. These days, the region is a burgeoning hub for robotics. We visited the vast Robot Test Field in Minami-Sōma, a facility that allows robots to be tested in real world conditions.

Visitors to Haramachi-ku, a district in the middle of the Fukushima city of Minami-Sōma, will notice a swathe of bare land stretching all the way to the giant sea wall over a kilometer away. The barren landscape is interrupted by what looks like a factory with exposed tanks and pipes, a concrete tunnel, and a runway. This is Fukushima’s Robot Test Field, the centerpiece of the Fukushima Innovation Coast Framework, an initiative being advanced by the national and prefectural governments. 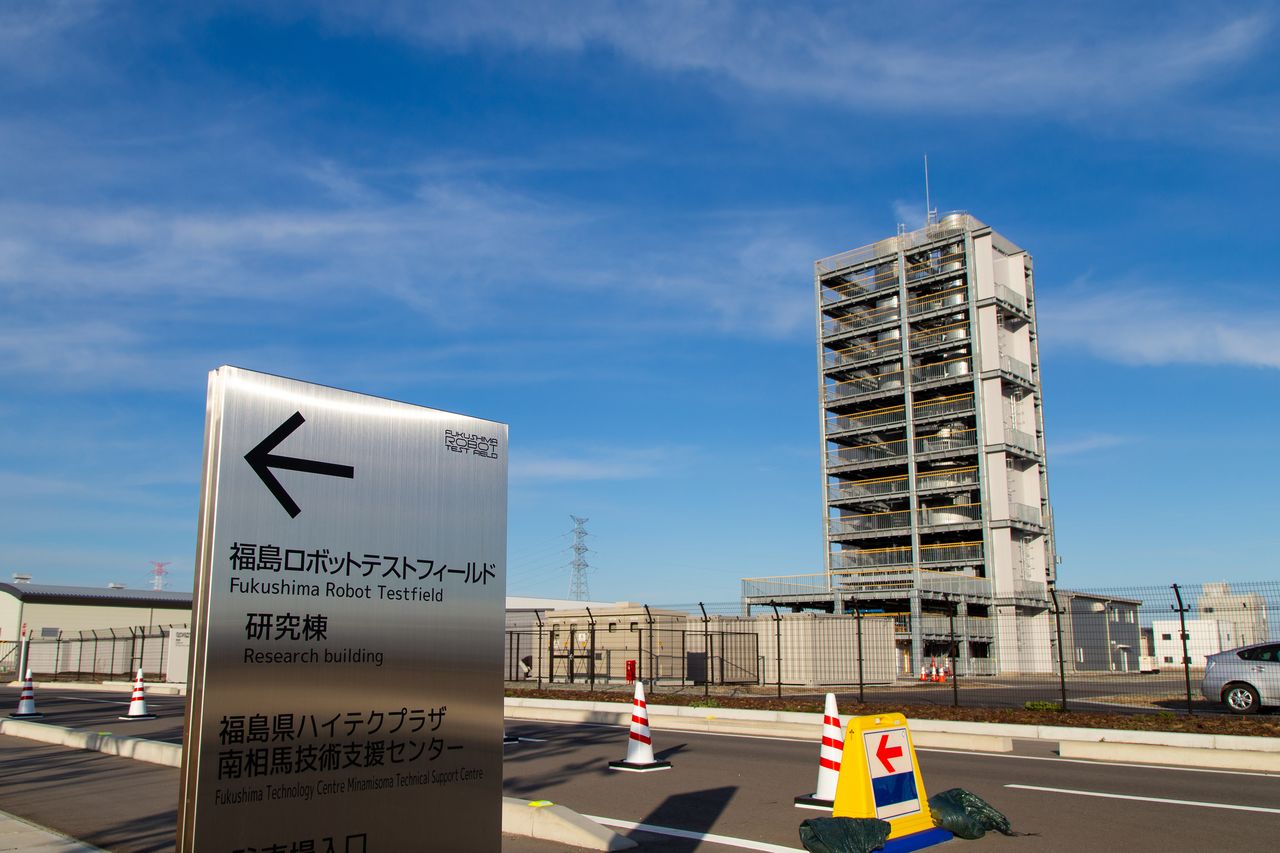 The Robot Test Field is located in an industrial park that was established in Minami-Sōma as part of the reconstruction of the city. The test factory is visible in the right of the photo.

“This area was devastated by the 2011 tsunami,” says Ishikawa Jin, head of the Fukushima Innovation Coast Framework’s operations planning section. “After the disaster, the ground was raised and a high sea wall constructed. However, the area remains uninhabited, and devoid of hotels or similar facilities. The Robot Test Field has put this land to good use as a testing range for drones and robots. I really hope that it will lead to the growth of the region.” 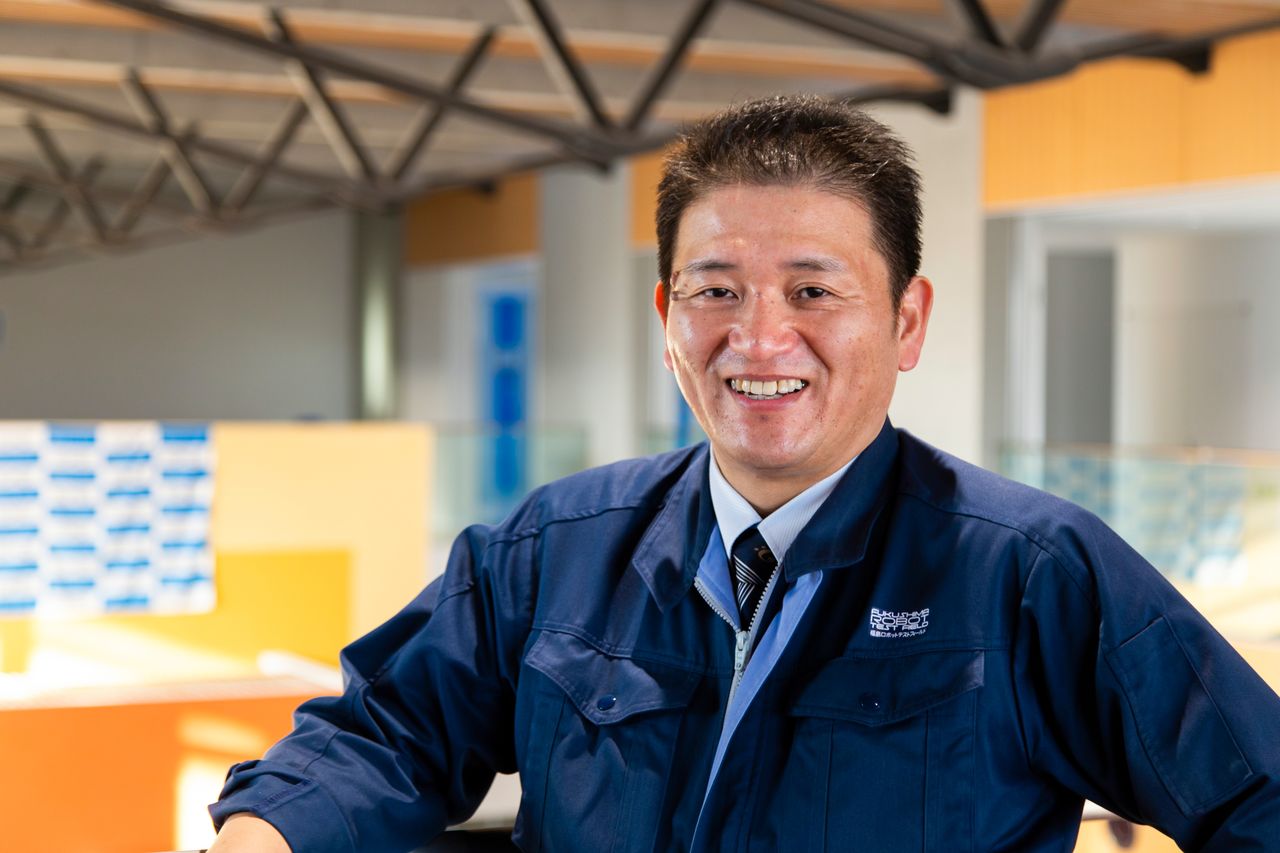 Ishikawa Jin is himself from Fukushima.

The double blow of the tsunami and the Fukushima Daiichi Nuclear Power Station disaster resulted in the loss of many industries from the Hamadōri region of coastal Fukushima. The Robot Test Field is situated around 23 kilometers north of the Fukushima Daiichi plant, just outside the 20-kilometer exclusion zone. Many residents moved away after the accident, fearing the effects of radiation.

“I want the RTF to set the standard for Japan’s robotics industry,” says Ishikawa.

Within the RTF, a series of facilities has been brought online progressively from July 2018, with the final component completed in April this year. The RTF has already been used for over 160 tests, some long-term, and hosted over 20,000 visitors. 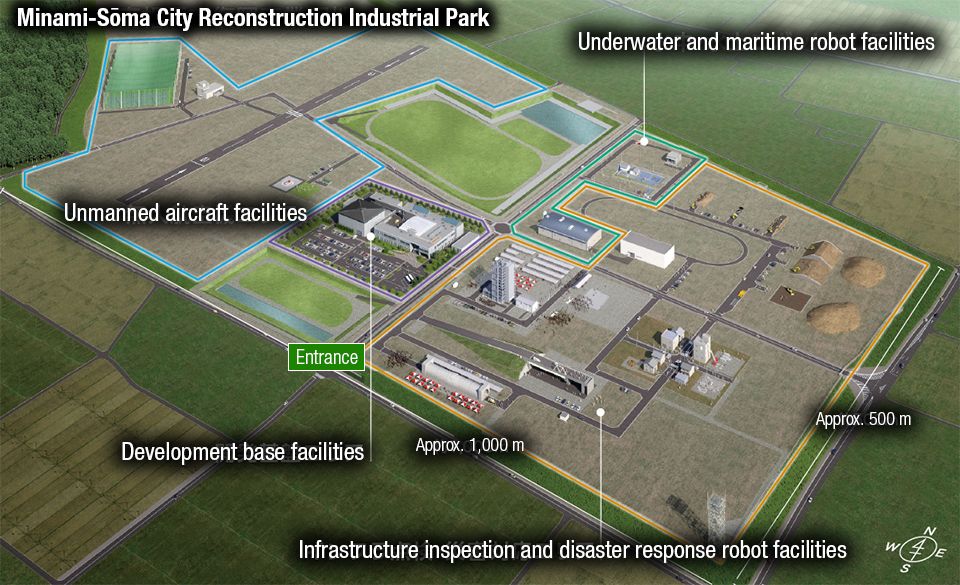 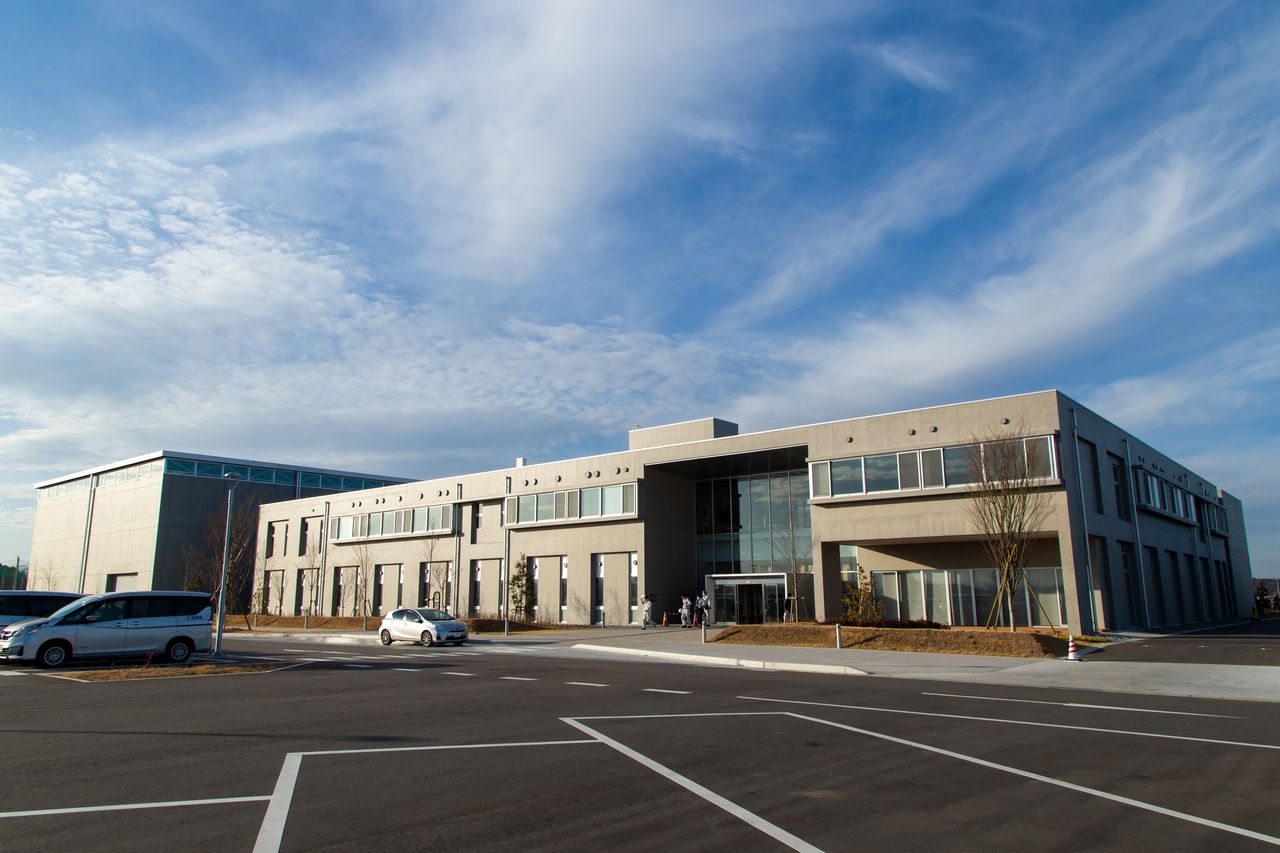 This research wing serves as the RTF’s headquarters, accommodating corporate and institutional tenants and featuring a conference hall and meeting rooms. 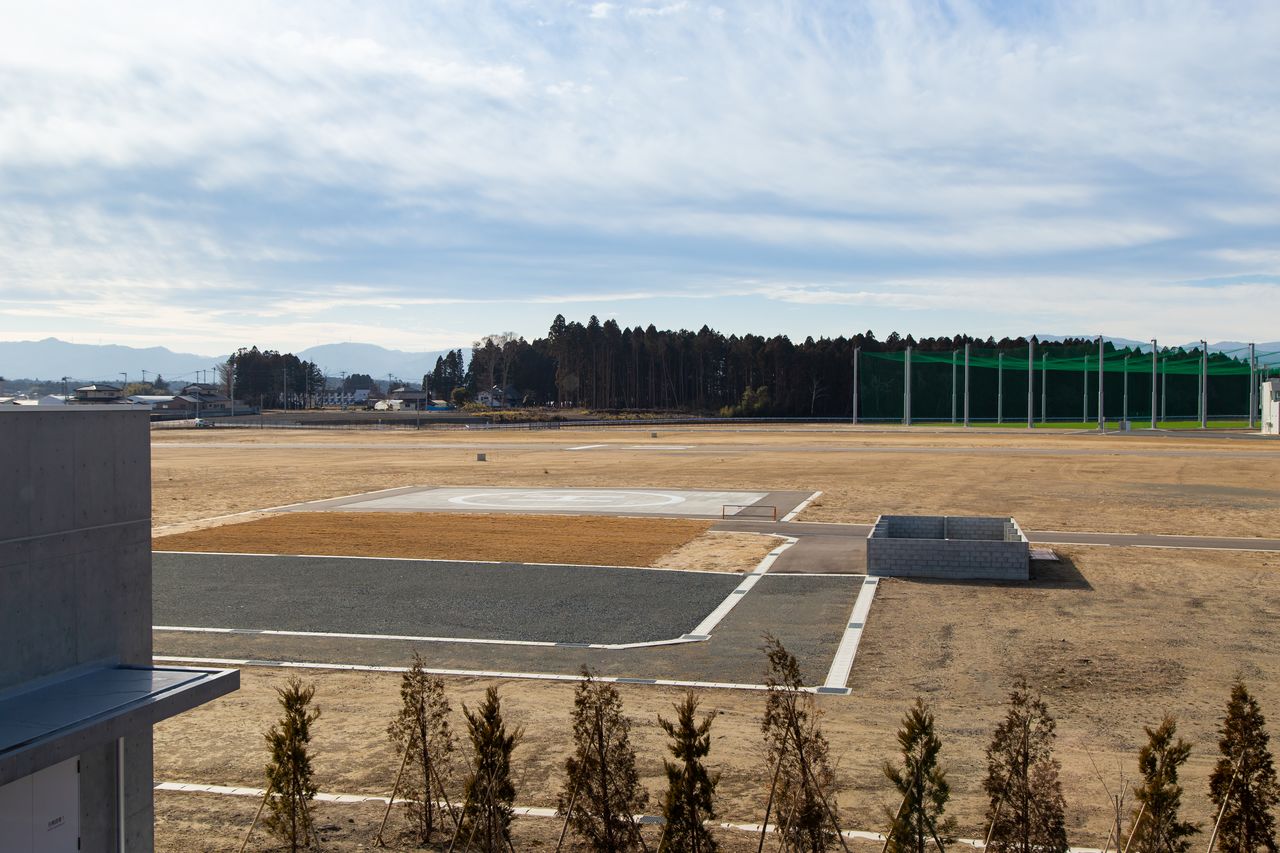 The 2011 tsunami reached the forest visible beyond the helipad, 1.4 kilometers inland.

The Race to Build a Flying Car

Robotics is predicted to be a growth industry in Japan, but a lack of suitable testing environments had been a major hurdle. For example, take air mobility, a nascent industry generating plenty of buzz at the moment. The Public-Private Conference for Future Air Mobility, a group established by Japan’s Ministry of Economy, Trade, and Industry in collaboration with the Ministry of Land, Infrastructure, Transport, and Tourism, aims to make commercial airborne delivery services a reality by 2023, followed by regional passenger drones, and finally urban passenger drones by 2030. While many Japanese corporations and organizations have joined the race to develop flying cars and delivery drones, they have all experienced difficulty finding suitable test environments. Japan is a mountainous, island nation, and the need for expensive testing ranges to properly test drones’ capabilities meant Japanese developers were being overtaken by drone heavyweights China and Canada, in addition to the rapidly rising United States.

The RTF’s drone testing range includes the 500-meter Minami-Sōma runway, which pairs with another, 400-meter runway 13 kilometers away in the town of Namie. Flight paths have been established over land and water, thus allowing long-distance flights to be conducted over a wide area. 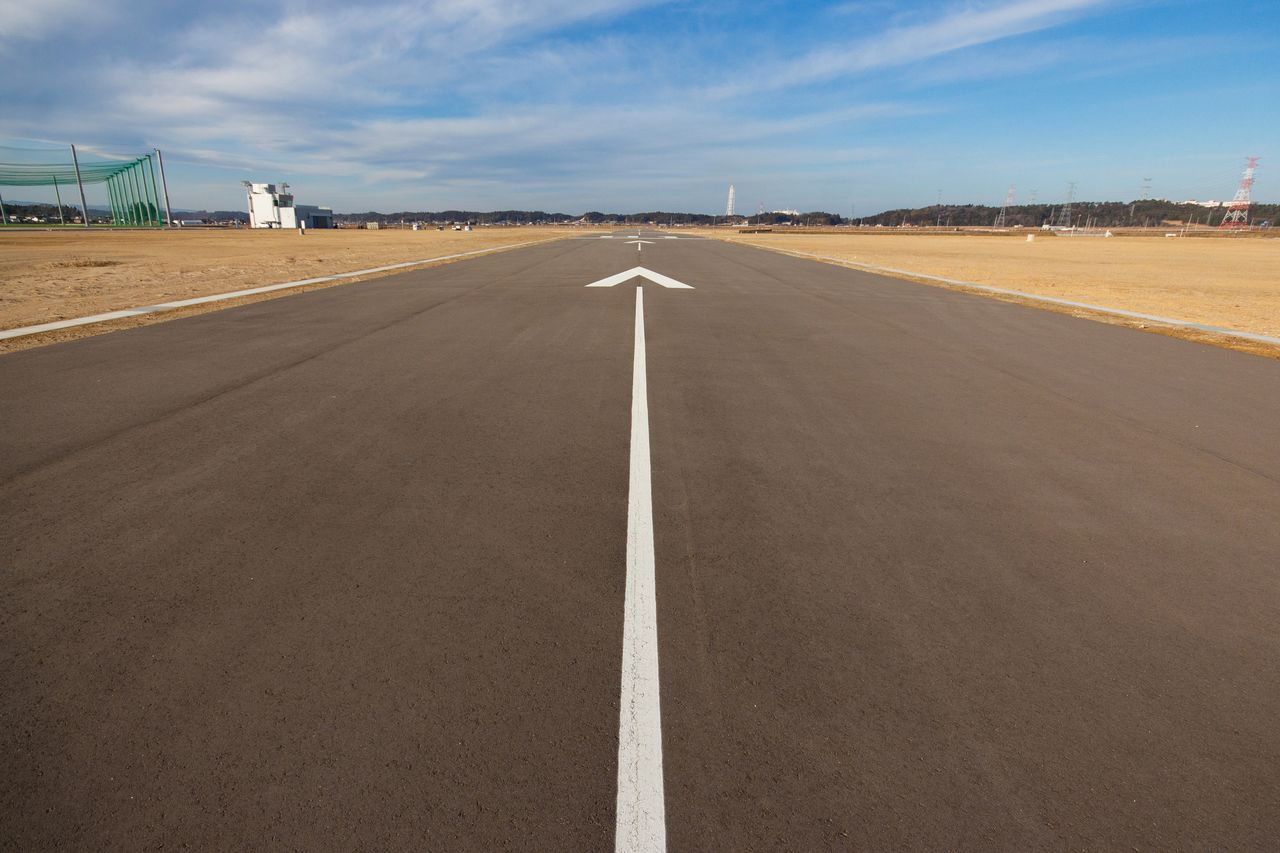 The Minami-Sōma runway is 500 meters long and 20 meters wide and features a hangar with basic servicing facilities. 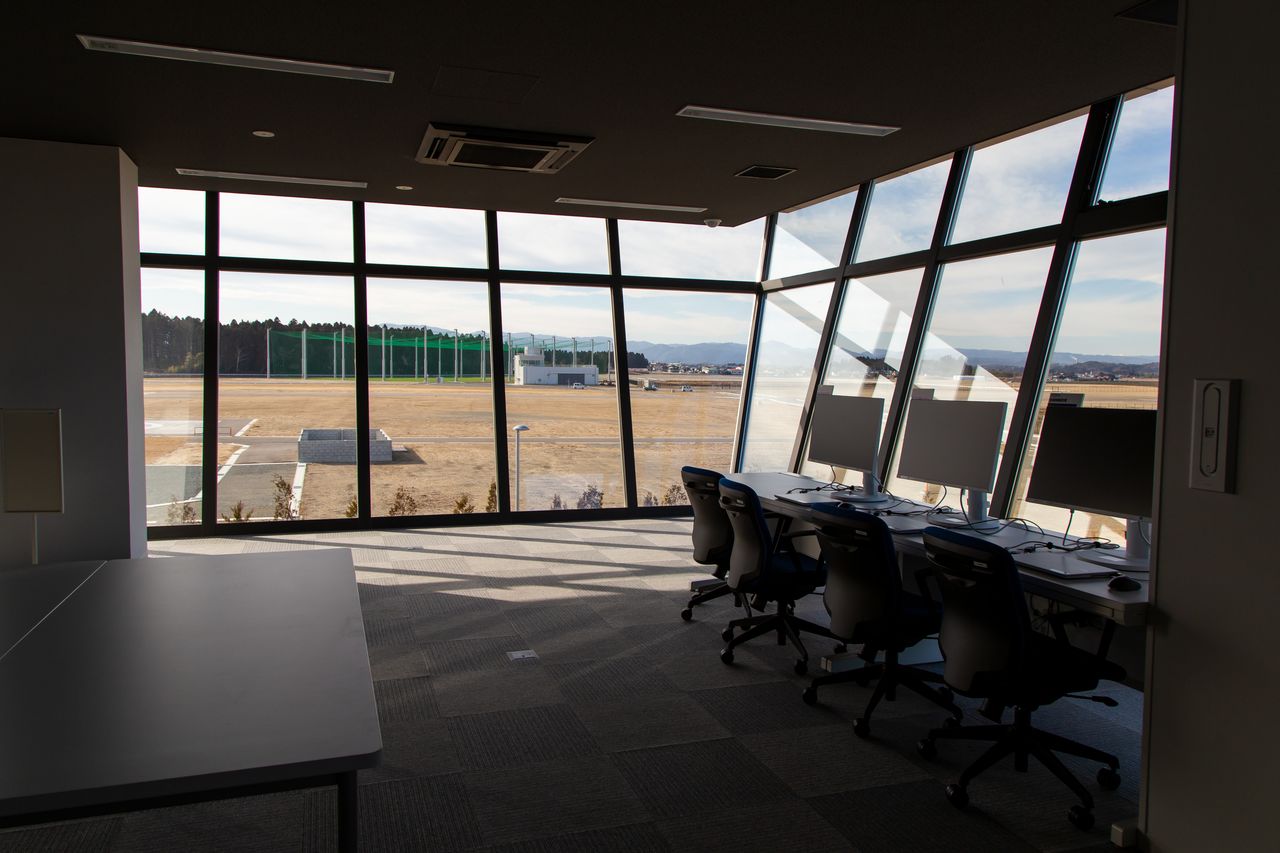 Tests conducted on the runway and heliport can be controlled from the central control tower in the research wing.

The drone range also boasts a heliport, an endurance testing facility, a wind tunnel, and an enclosed testing range. Unlike cars and motorbikes, airborne vehicles are subject to aviation regulations even when tested on private land. However, because the entirety of the RTF’s 150- by 80-meter testing range is enclosed by a 15-meter-high crash net, it is treated as an indoor space, and exempted from aviation law. This means that operators can make night flights or perform payload dropping tests that could otherwise only be performed with advance regulatory consent, in a real-world environment that, unlike an indoor testing range, is exposed to variations in wind, rain, and sunlight. 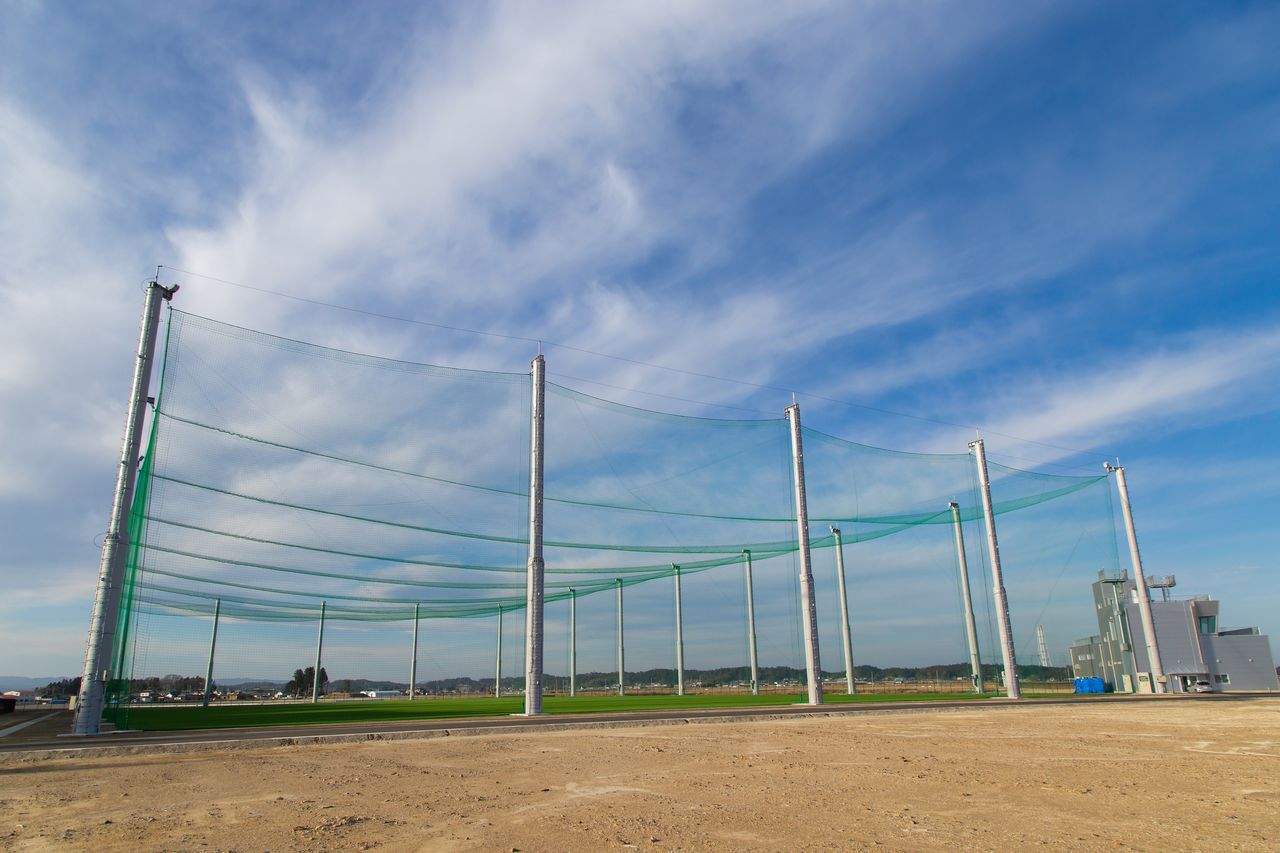 Flights performed in this netted-off testing range are exempt from aviation law. 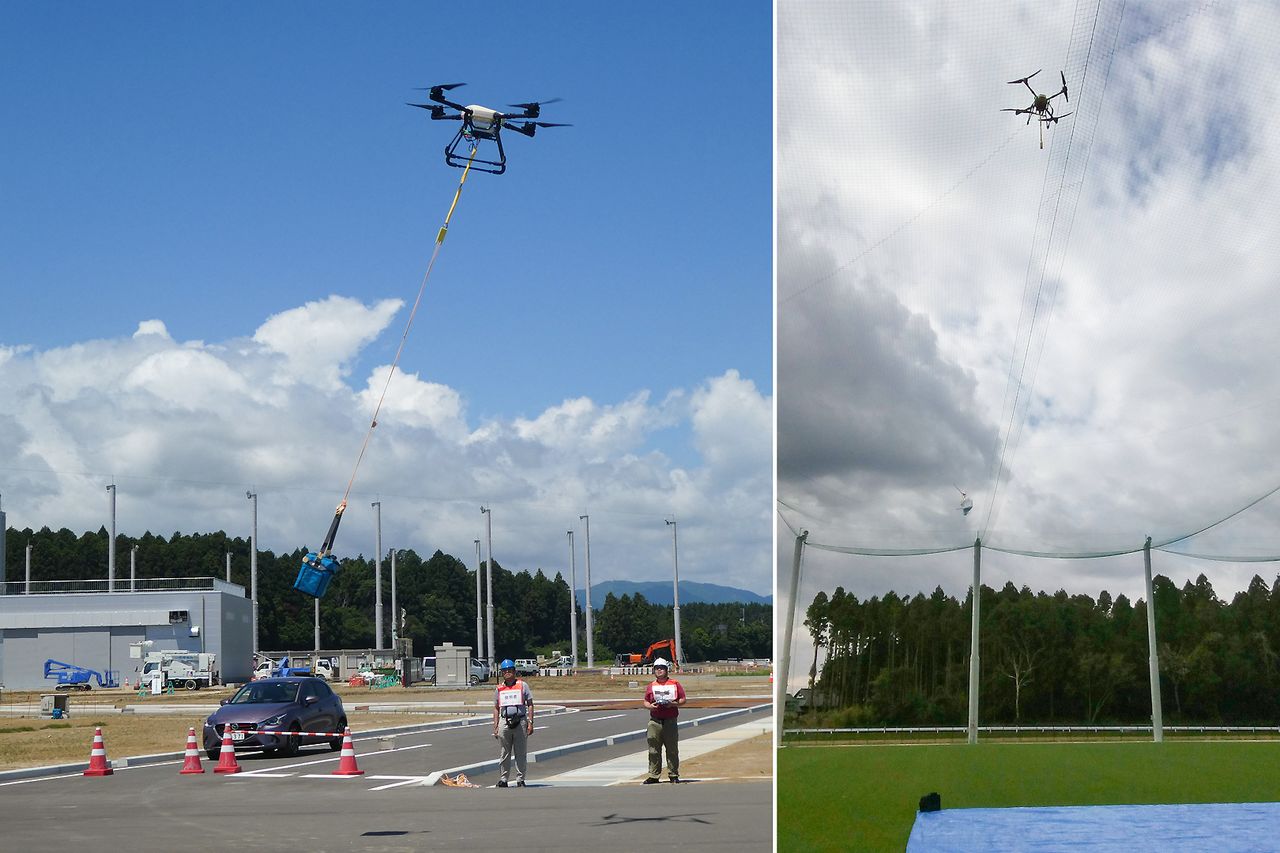 Staff from Tokyo Metropolitan Bokutoh Hospital use an unmanned aerial vehicle to simulate the transportation of blood for transfusion (left) and drop a blood pack in the enclosed testing range (right). (© Fukushima Robot Test Field)

Another major feature is the development center area in the center of the RTF, which features a research building, indoor testing range, and pretest preparation area. The facility allows servicing before and after tests and is outfitted with state-of-the-art machine tools to work on parts and precision measuring equipment for observation and analysis. While the facility contained 13 labs when it was first opened, these quickly filled up, and additional rooms were added. There are currently 16 corporate and institutional tenants, and with still more tenants on the waiting list, the facility continues to be extended.

“One of our clients used to cart their prototype drones all the way from Aichi to Hokkaidō. With no onsite facilities in Hokkaidō that would enable them to perform repairs or adjustments, though, whenever anything went wrong they had to pack up and go back to Aichi,” laughs Ishikawa. “They’re pleased that they can now do repeated tests while making improvements as necessary, here in the Fukushima Robot Test Field.” 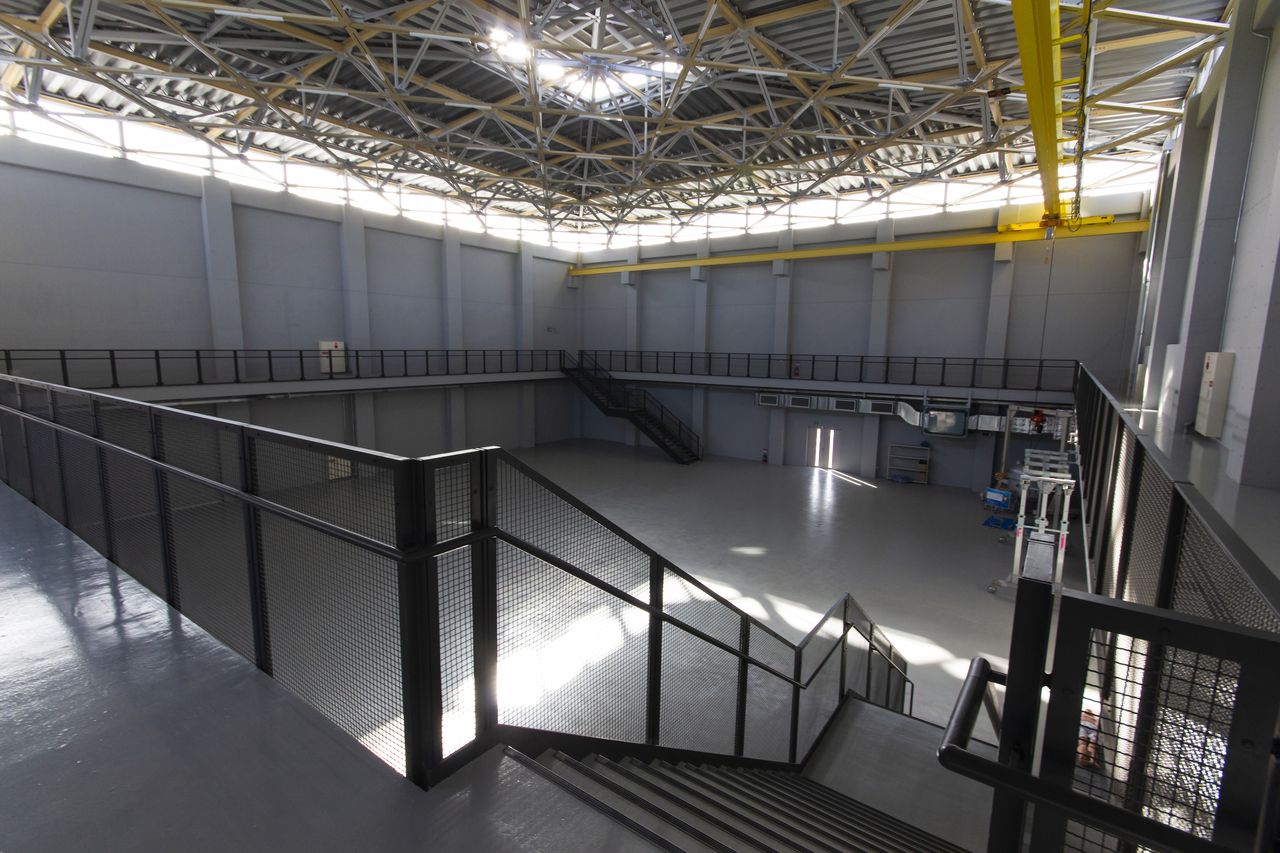 At 32 by 30 meters with an 11-meter-high ceiling, the indoor testing range is suitable for a wide range of tests. 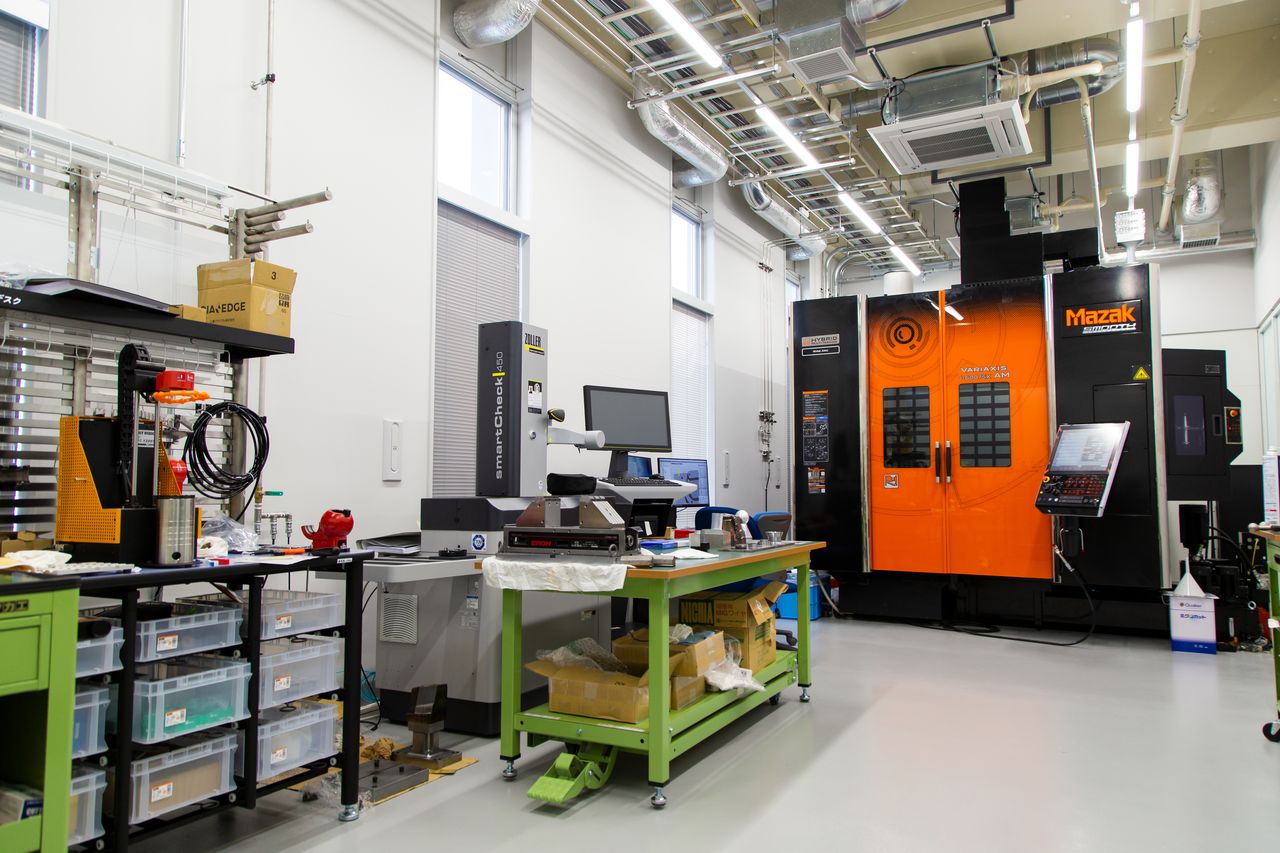 The sophisticated machining facilities are popular with university groups and small businesses that cannot afford to invest in tools of their own. 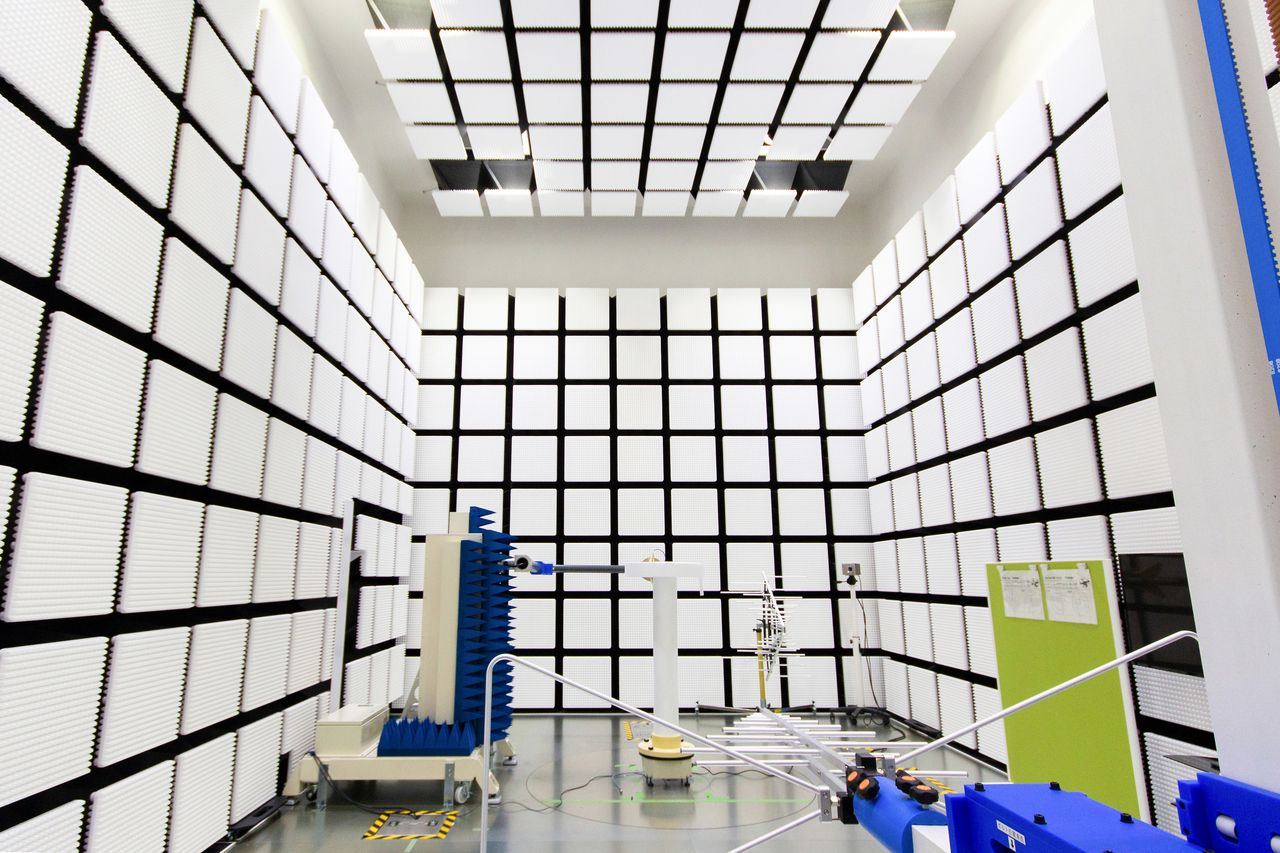 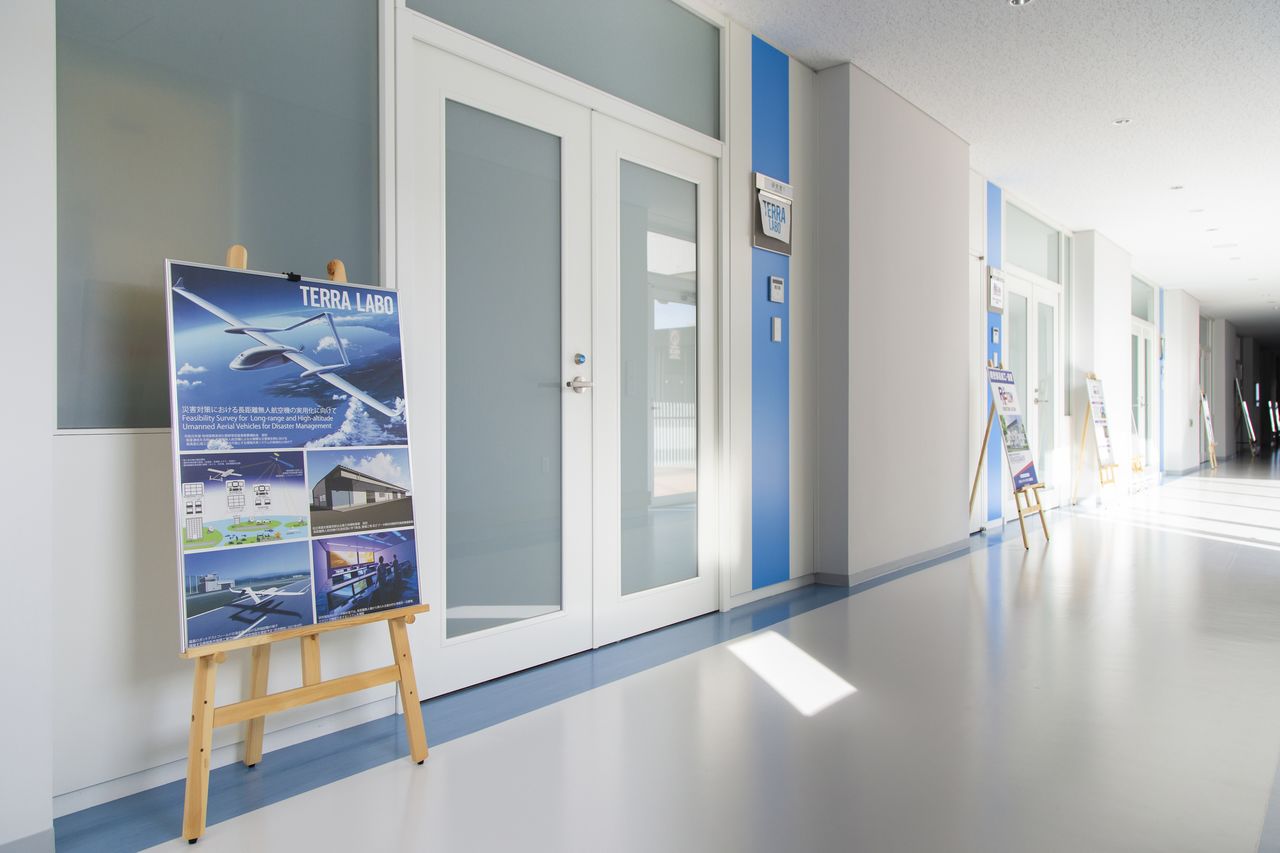 The Role of Robots at Fukushima Daiichi

Disaster-prone Japan has repeatedly been ravaged by earthquakes throughout history. In recent years, the country has been battered by an increasing number of typhoons and extreme weather events. As infrastructure built in Japan’s postwar period of rapid economic growth starts aging, along with the citizens who used it, hopes are growing that some of the more dangerous repair tasks will be performed by robots in the future. Further advances in robotics will also be indispensable in order to successfully decommission the stricken Fukushima Daiichi reactors.

The RTF’s infrastructure inspection/disaster response zone and underwater and aquatic zone allow robots to be tested in large structures and buildings. Both facilities are packed with features that have been included on the advice of academics and experts. The test plant, designed to simulate a chemical factory, contains a variety of differently shaped valves, tanks, and pipes in a small area. There are also spiral staircases, vertical ladders, and three chimneys of varying diameters. The area can be filled with smoke or gas, packed with rubble, or have a heat source placed inside to simulate various types of emergency. The test tunnel is fitted with shutters at either end that can be opened to allow testing at the tunnel entrance or closed to test in darkness. The tunnel is fitted out with LED lighting as well as sodium lamps, and the walls have been treated to simulate peeling and cracking. 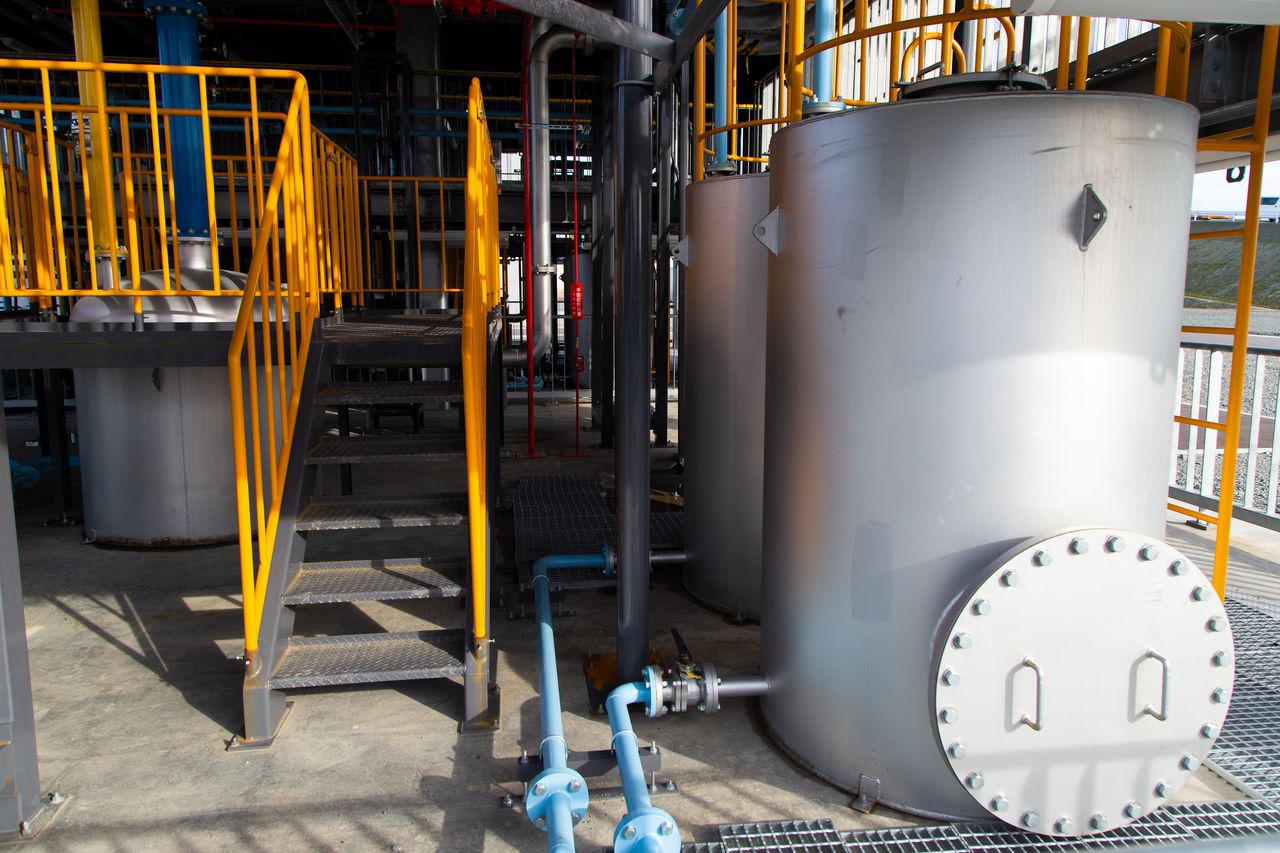 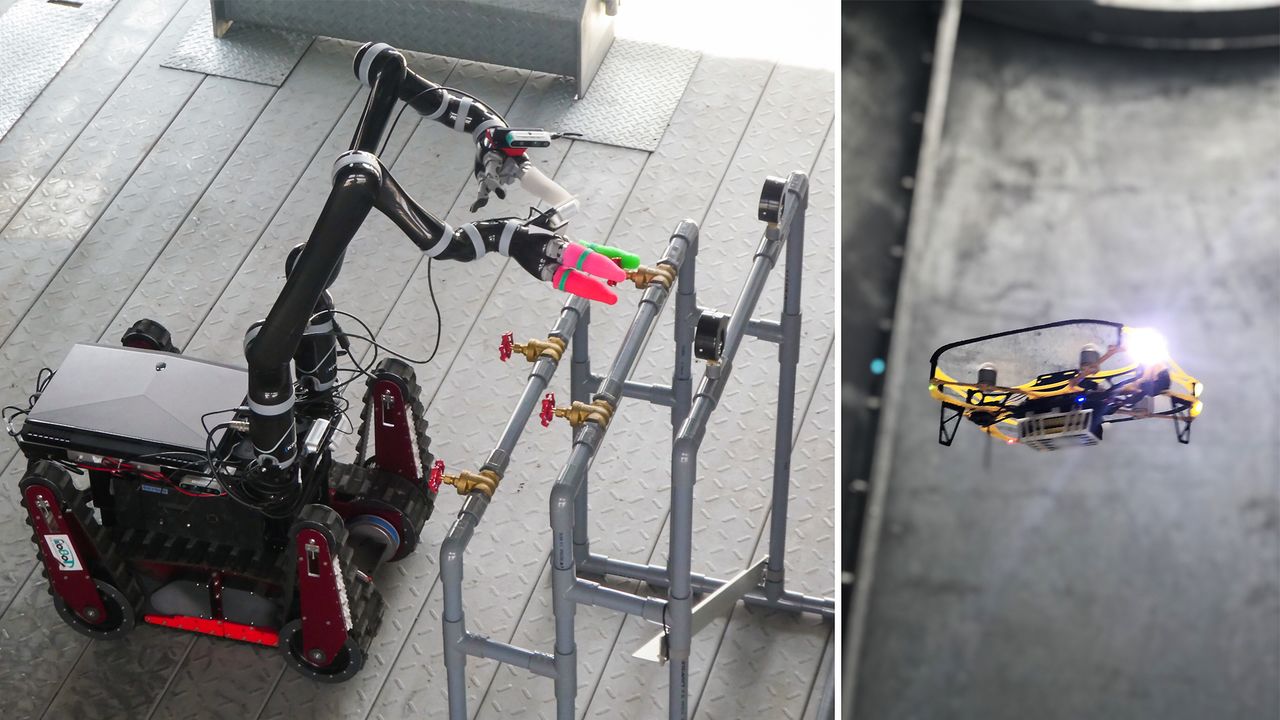 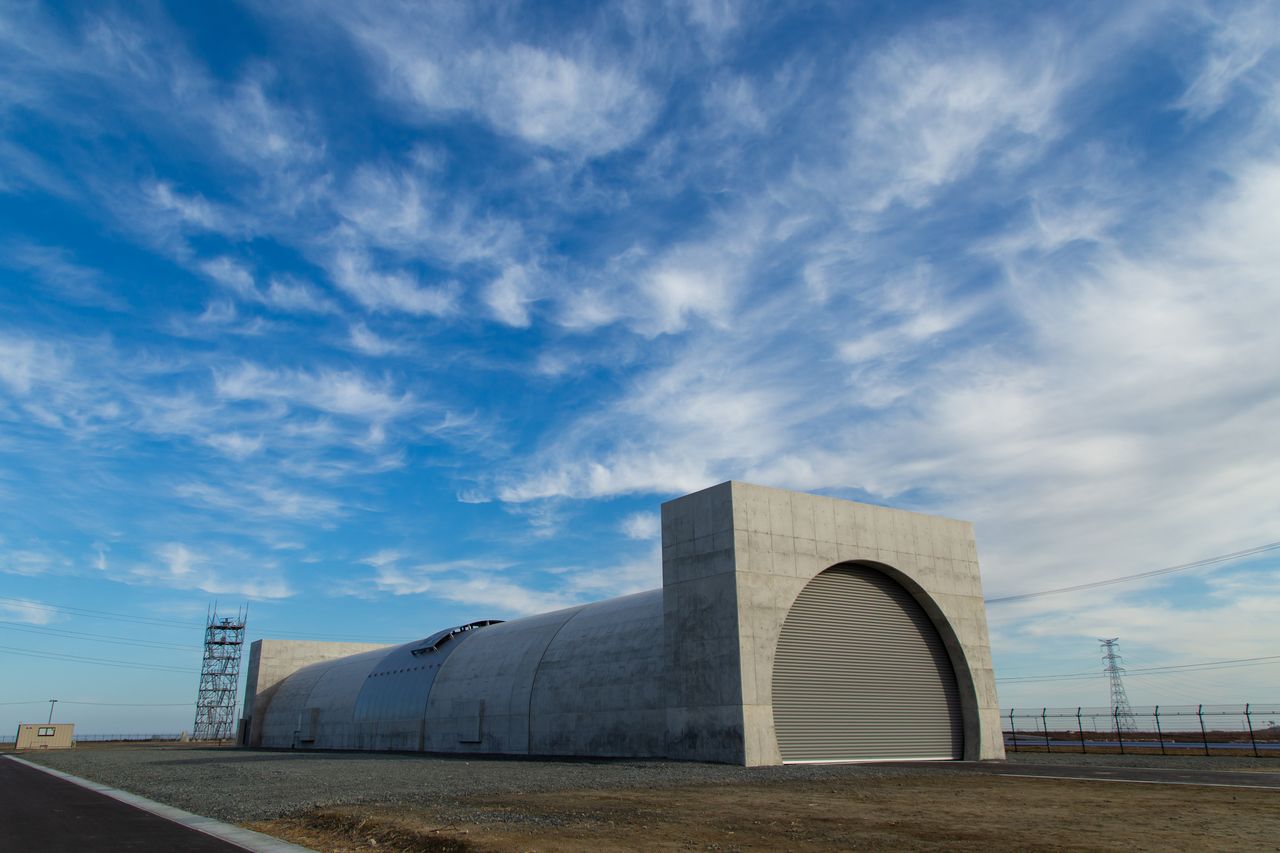 The test tunnel can be sealed with shutters on both ends. 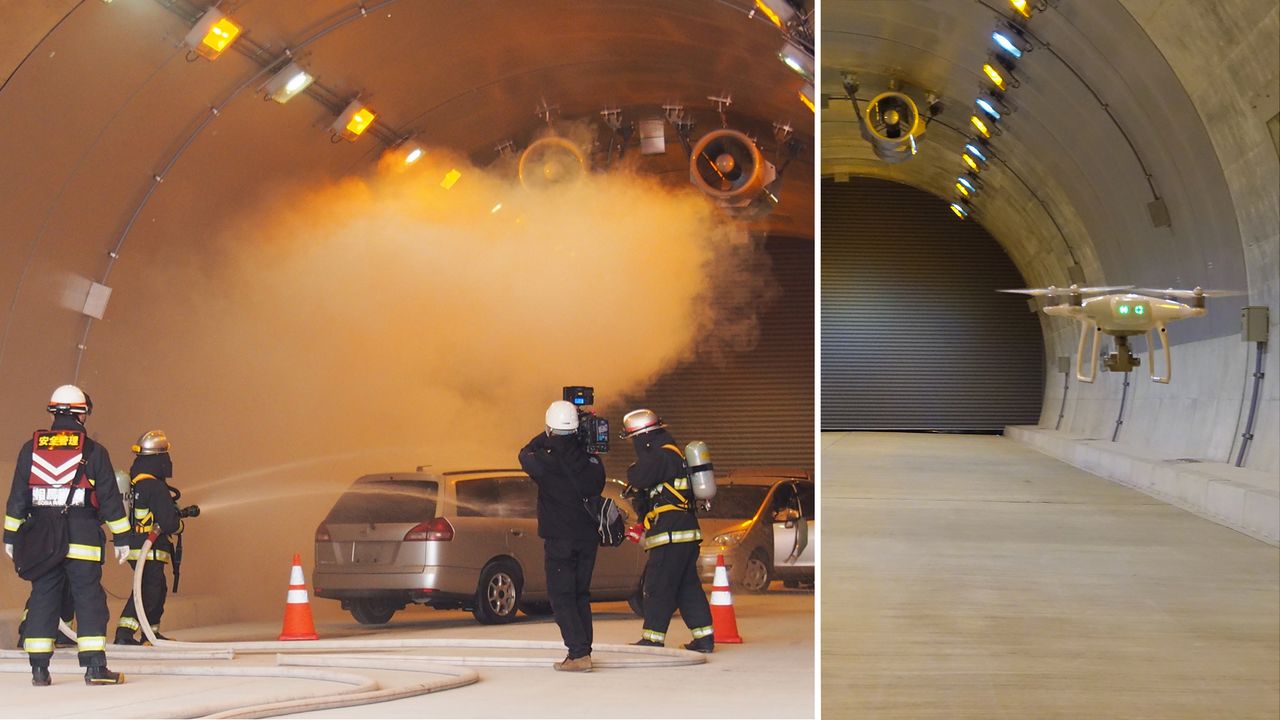 In February 2020, the RTF hosted a firefighting drill, shown at left. At right, a Wiz drone inspects the facility in December 2019. (© Fukushima Robot Test Field)

The “urban zone” is fitted with traffic lights, power poles, and even road signs, enabling search and rescue operations to be tested in residential and office buildings. The roads in this urban zone can also be used by driverless cars. The “flooded urban zone” simulates a flooded residential area and can be used not only to test underwater and aquatic robots and drones, but also for rescue drills using manned boats. While still under construction at the time of reporting, when the experimental bridge, indoor pool, and wind tunnel are completed in spring 2020, the test environment will be even more comprehensive. 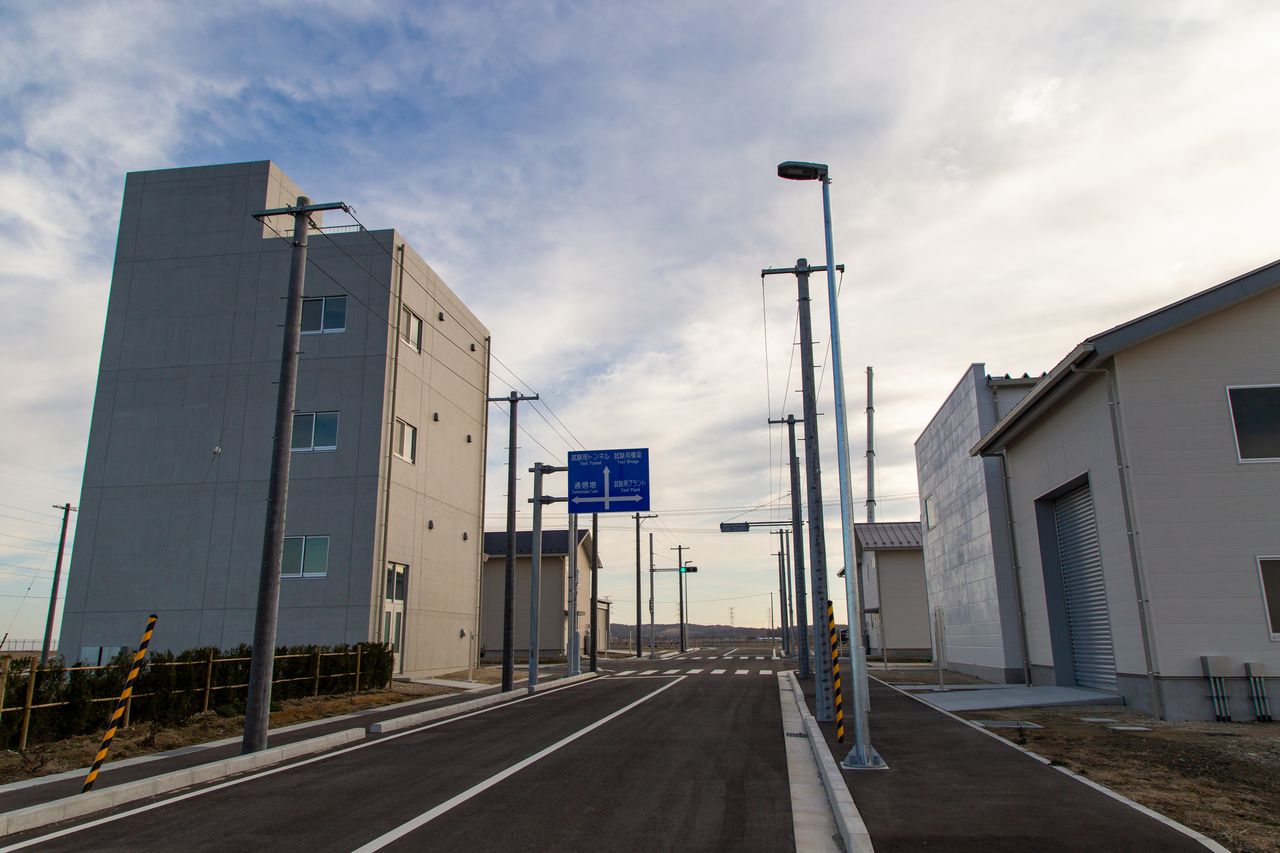 Three of the buildings in the urban zone can be used for testing. 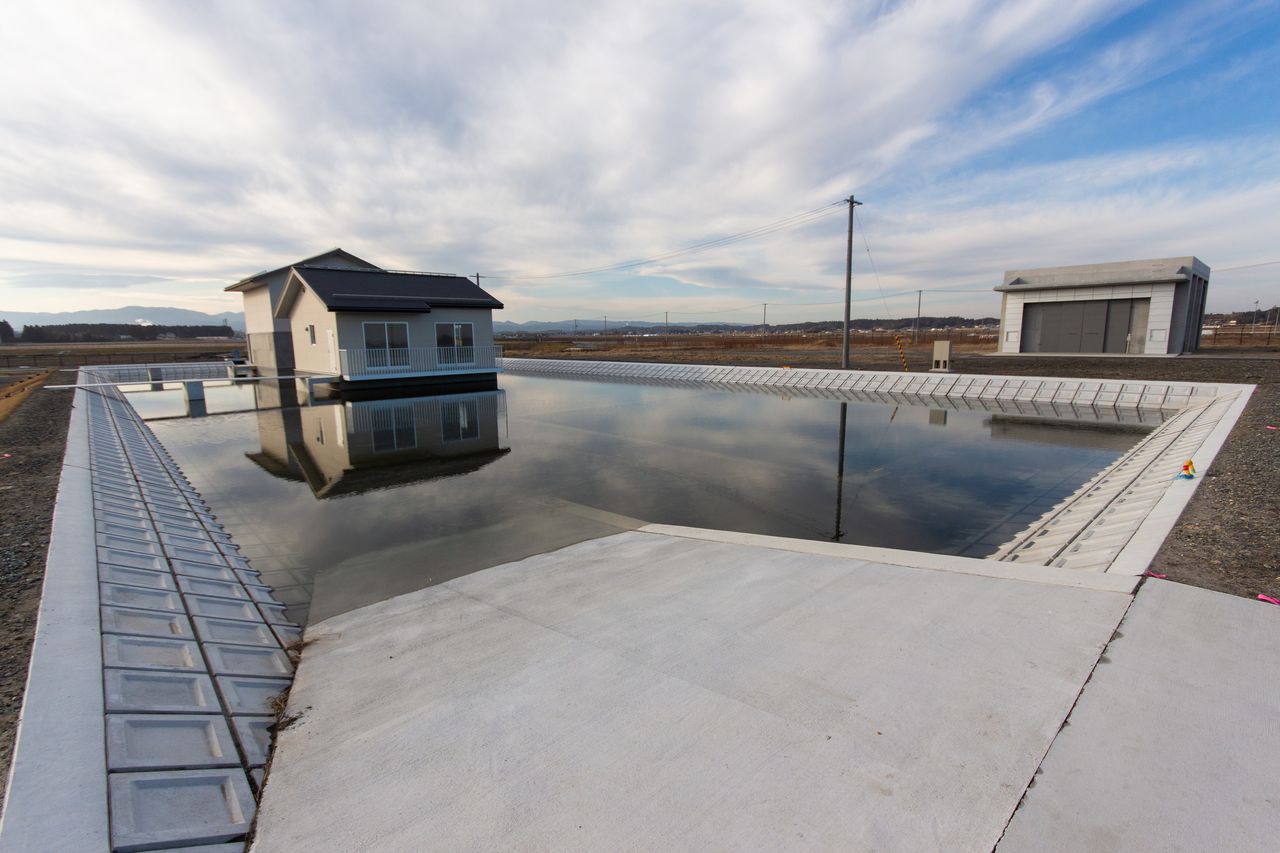 Measuring 50 by 19 meters, the outdoor pool is up to 5 meters deep in places. 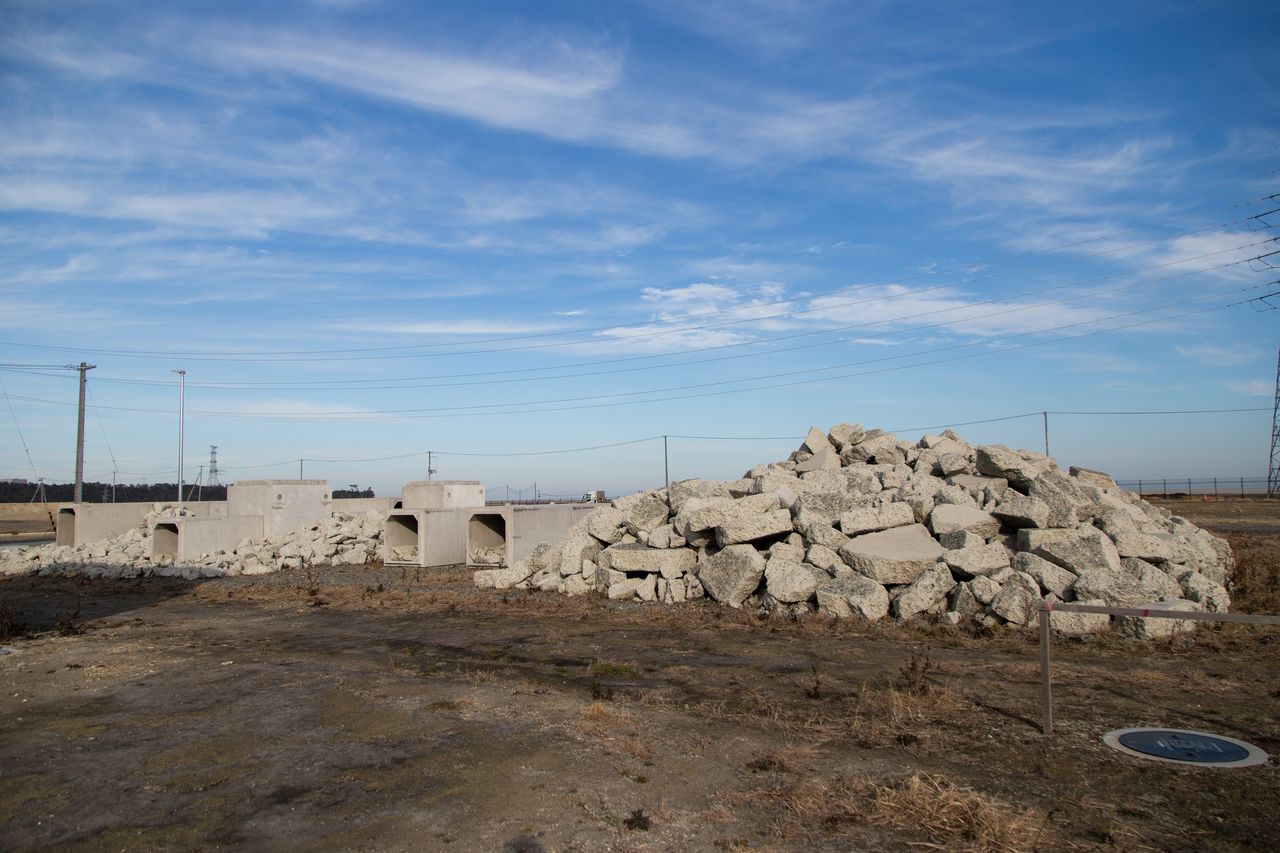 The rubble and landslide zones enable search and rescue drills, in addition to drills that simulate efforts to restore services. This area can also be used to train rescue dogs.

The Tokyo-based robotics firms Robotcom and Fa.com have recently been helping to breathe life back into the area with their construction of a factory and employee accommodations in the Minami-Sōma Reconstruction Industrial Park.

Ishikawa says, “In addition to the issue of how to attract corporations, institutions, and prospective visitors to come to Fukushima, we also need to think about how to link the RTF to local industry.” He says his team is also working to help local businesses, and has a coordinator distributing pamphlets containing information on Fukushima-based suppliers of related materials and technologies in an effort to encourage robotics businesses to procure materials and parts locally. 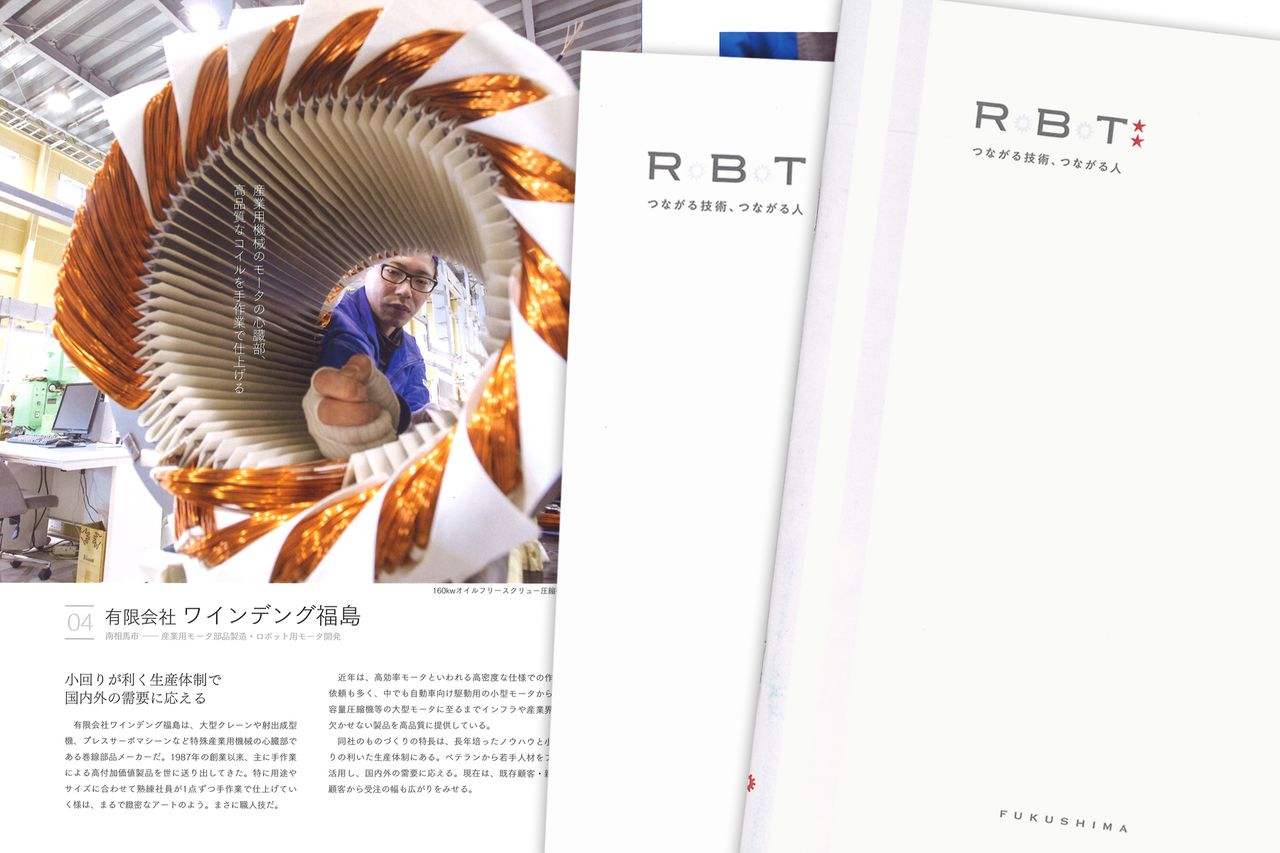 In January 2020, the Tōhoku Access intercity bus service (based in Minami-Sōma) was extended to the Fukushima Robot Test Field, thus improving access from JR Fukushima and Haranomachi stations.

Later this year, robot enthusiasts can look forward to the World Robot Summit 2020, which will be held in collaboration with international exhibition space Aichi Sky Expo. Ishikawa says that measures are being put in place to organize accommodation, transport, and meals, in order to cater to the needs of not only Summit attendees, but also engineers from RTF tenant organizations and site visitors. “I want this to be somewhere the robotics engineers of tomorrow can hold study camps. I am doing my best to make Fukushima a place that is associated internationally with robotics, not disaster,” he says. 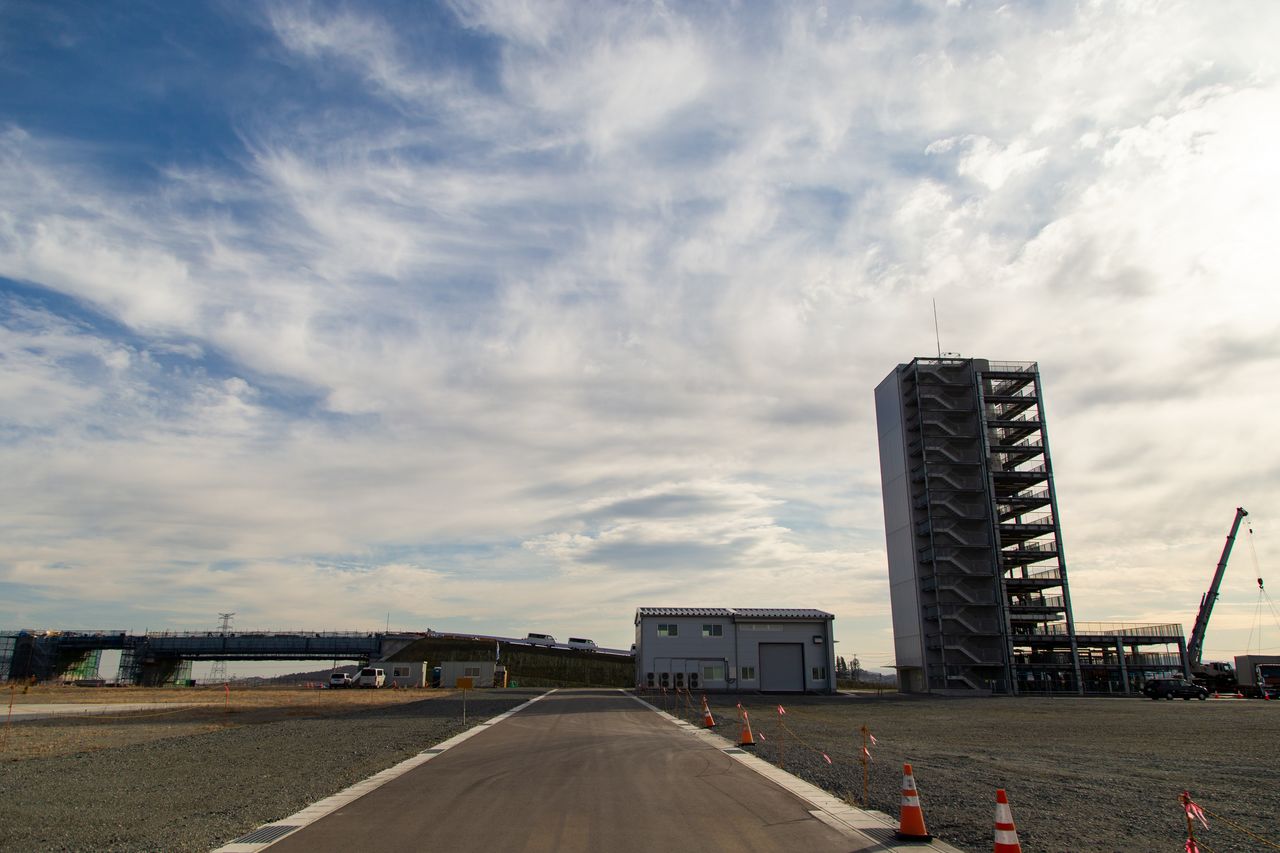 The test bridge (at left) will soon be completed.

(Originally published in Japanese. Reporting, text, and photos by Nippon.com. Banner photo: Looking out toward the Pacific Ocean from the RTF’s research wing.)