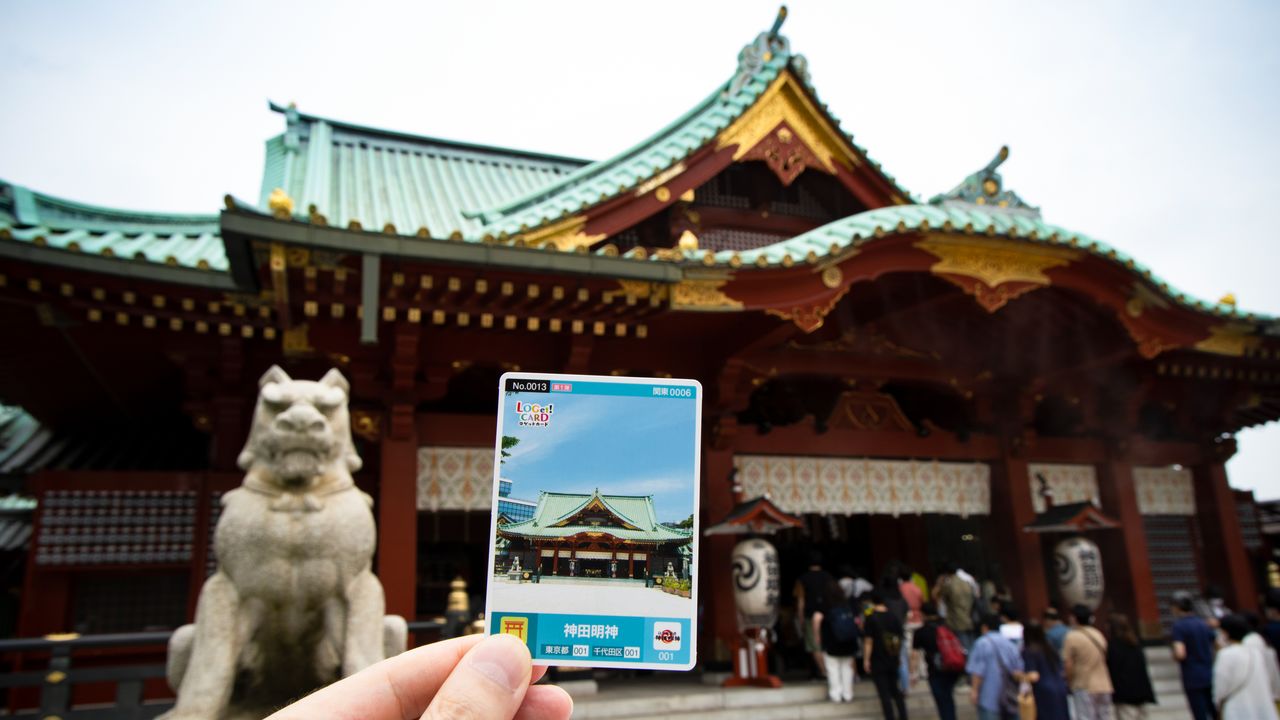 The LOGet Card: Collectible Souvenir of Travels in Japan

Travel Jul 17, 2020
LOGet Cards, a set of standard-format cards describing popular local sightseeing attractions, debuted on July 3. These promise to become a valuable sightseeing publicity tool and a travel souvenir; we talked to the originator of the idea to find out more about it.

LOGet Cards are colorful cards with photo of various tourism attractions around Japan and information about the sites’ history, highlights, and nearby points of interest on the back. The first series consists of 52 cards for spots from Hokkaidō’s Asahiyama Zoo in the north to the wild Kagoshima island of Yakushima in the south. Only available on site, the cards have rarity value and are sure to attract collectors’ interest.

The cards, which come in a standardized format, are color-coded by regional block—purple for Hokkaidō, light blue for Kantō, and so forth—and have pictograms that show the attraction category, such as towers, castles, mountains, or other features. This way fans can collect cards however they please, such as first collecting only cards in the Kantō block or getting all the cards featuring a certain type of attraction. 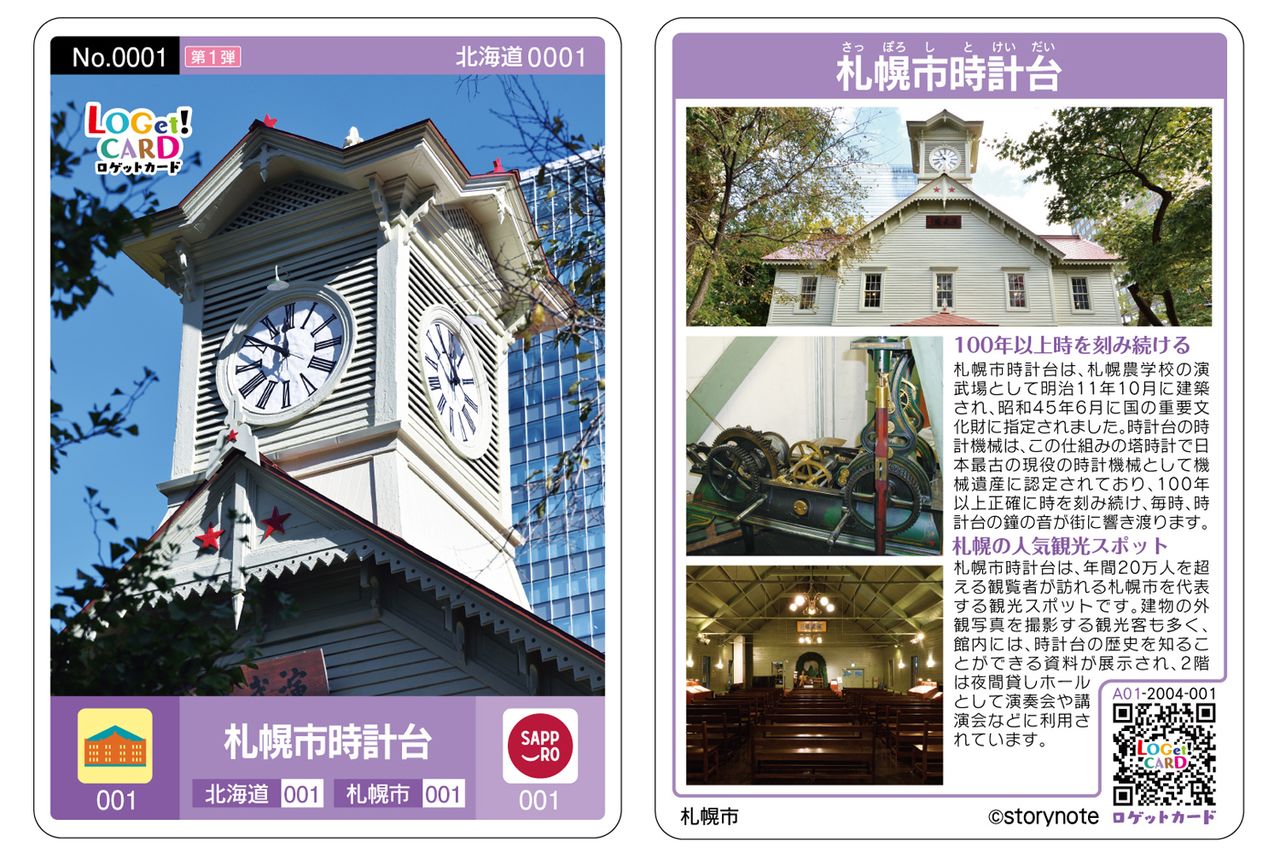 Card #001 features the Sapporo Clock Tower in Sapporo, Hokkaidō. Each card carries photos and information about the featured attraction. (Courtesy of Storynote) 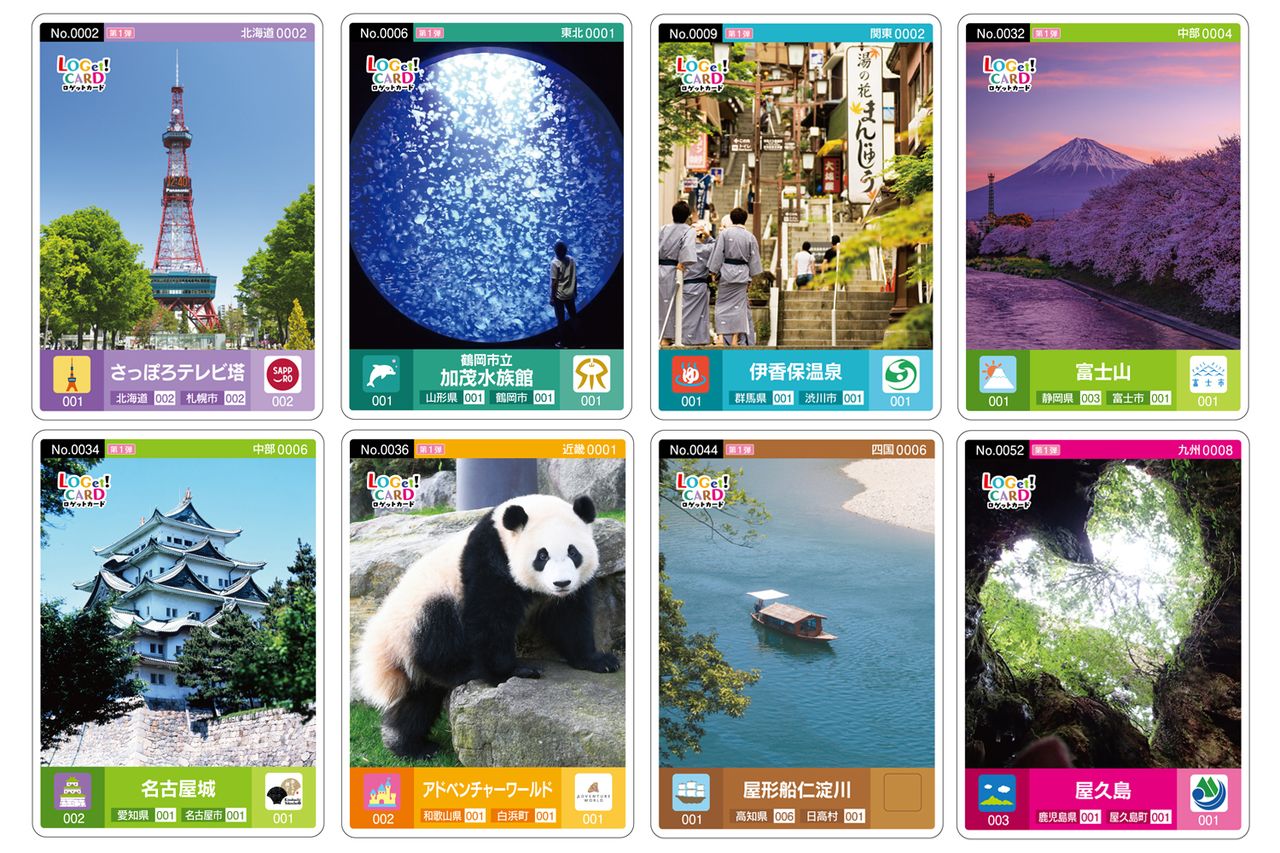 The cards are color-coded by region and carry category icons in the lower left-hand corner. Fans can collect cards by color, by category, or however they wish. (Courtesy of Storynote)

A Novel Idea for Attracting Visitors

Prior to the official launch on July 3, a limited number of cards were distributed on June 27 at Kanda Myōjin shrine, a publicity event that quickly attracted a long line of devoted collectors. 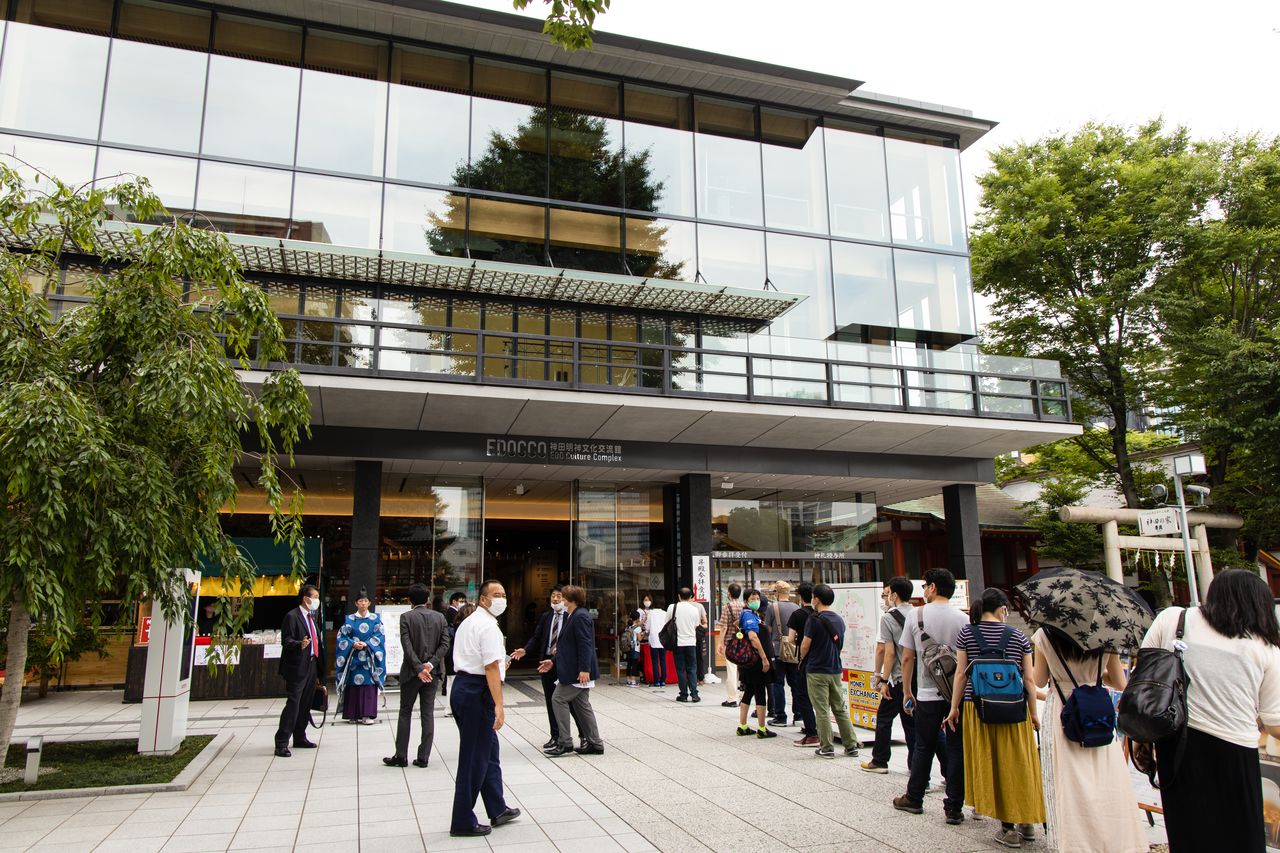 LOGet Cards being handed out at Kanda Myōjin’s Edocco Edo Culture Complex. Many standing in line were collectors of popular manhole cards, which describe colorful manhole cover designs depicting local characters or scenic and historical spots throughout the country. 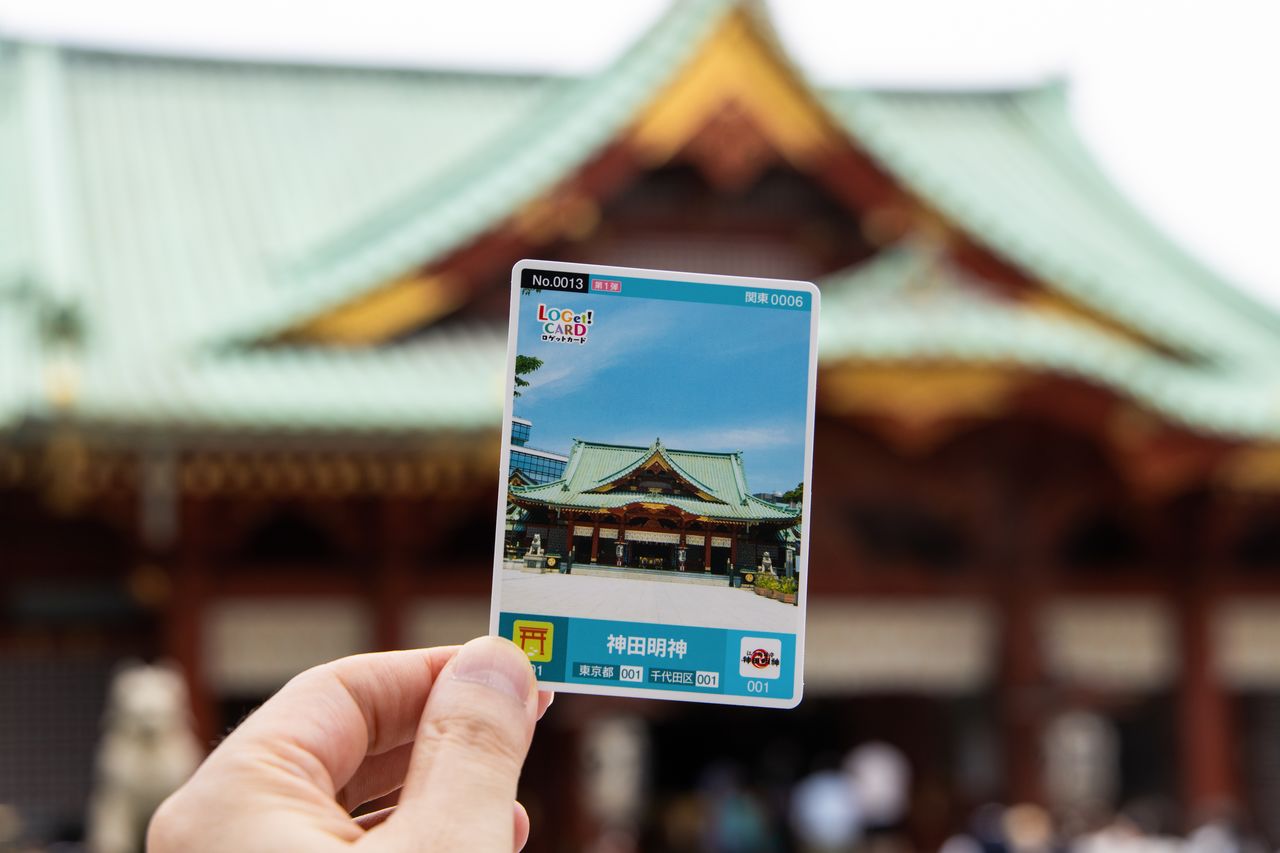 The Kanda Myōjin shrine LOGet Card carries information about the Kanda Matsuri, known as one of the “Three Great Festivals” of Japan.

Yamada Hideto, an employee of scenario production company Storynote, is the man behind the LOGet Cards. During a stint as an employee at a sewerage PR organization, Yamada hit on the idea of producing “manhole cards” to publicize colorful manhole covers found in different Japanese cities. His idea struck a chord: To date, 535 municipalities have produced 667 types of manhole cards, of which more than 5.5 million have been issued.

The manhole cards depict manhole covers in colorful designs featuring local sightseeing spots or specialty products. The cards are only available in locations near the manhole covers, so possessing a particular manhole card is evidence that you have visited that place. Manhole card collectors have fanned out across the country to obtain the cards and stimulated regional tourism as a side-effect.

Yamada relates: “When we hand out manhole cards, we distribute them together with maps of nearby attractions or eateries. As I traveled throughout the country to help promote tourism, it occurred to me that popular sightseeing spots could be featured on similar cards.” 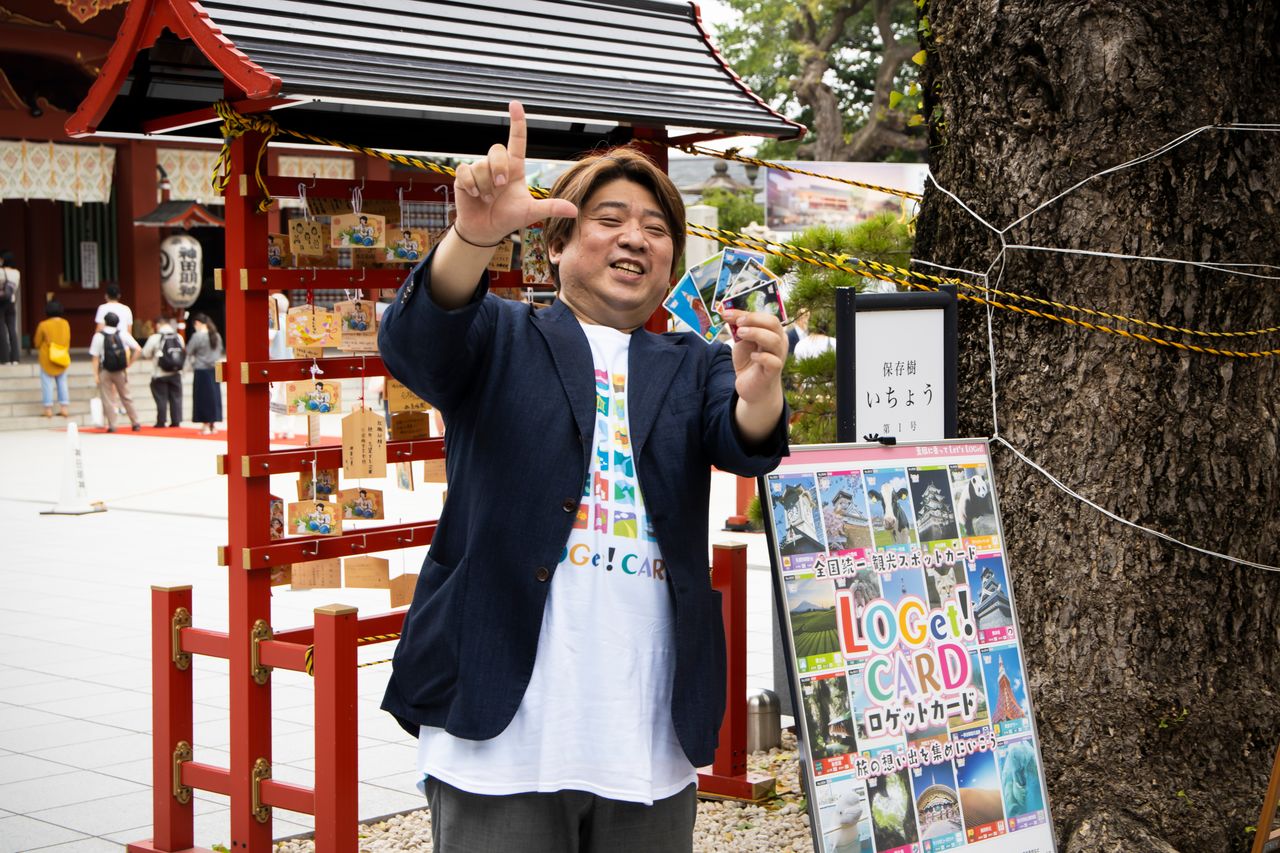 Yamada holds a LOGet Card in front of a featured attraction. His stint as a toy company employee also provided a hint for the collectibles.

Whereas manhole cards are distributed to anyone who goes where they are installed, people wanting to obtain a LOGet Card face an additional hurdle. For example, to get the Tokyo Tower card, visitors must take the top deck tour, which has to be reserved in advance. At Ikaho Onsen hot springs, they need to take a dip in the communal open-air bath in order to receive a card.

“I hope that people will take LOGet Cards home with them as a souvenir of their travels. Some may feel that the extra step they need to go through to obtain a card is a bother, but when they look at their Ikaho Onsen card, they’ll likely remember the blissful experience of soaking in the bath there. Since the featured facilities benefit directly, I believe the cards’ high quality can be maintained.” 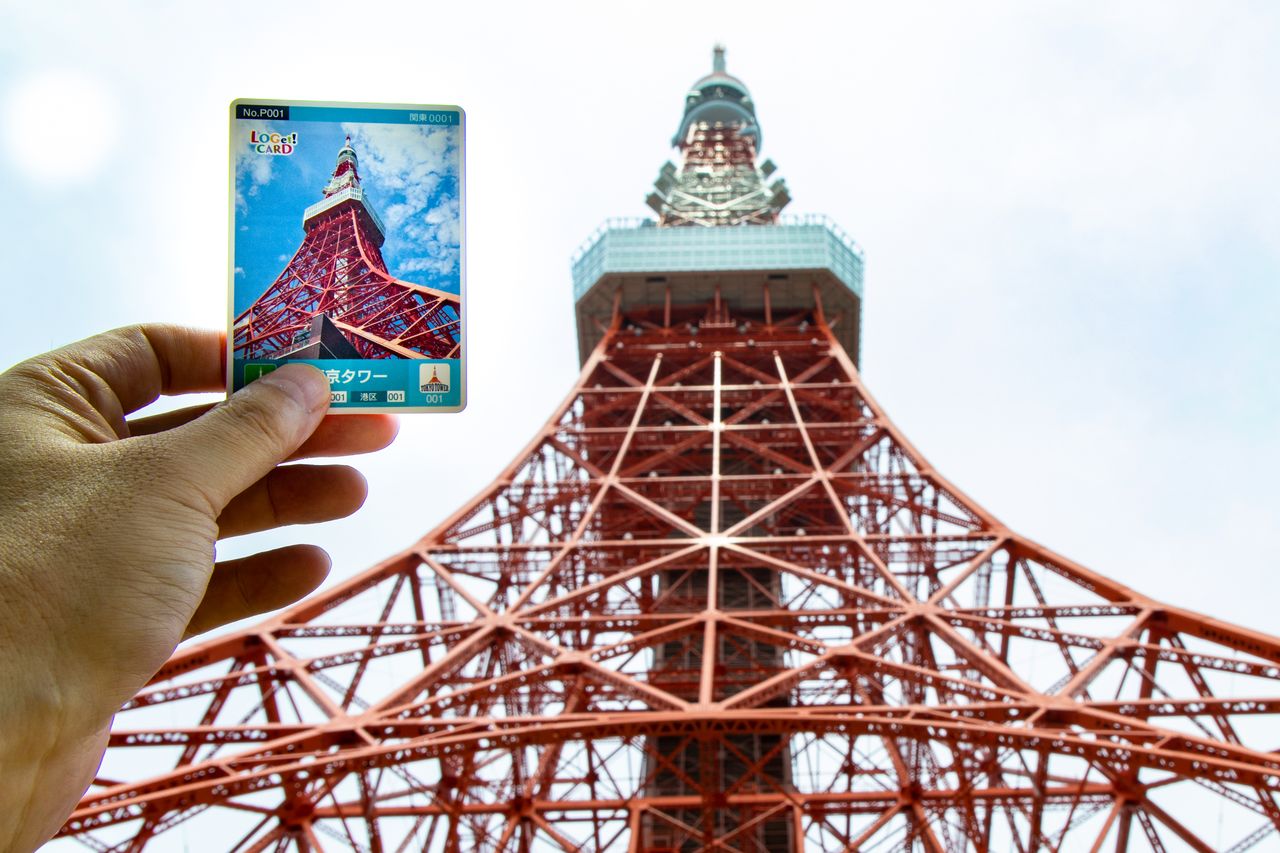 Yamada holds a LOGet Card in front of a featured attraction. His stint as a toy company employee also provided a hint for the collectibles.

Creating Stories and a Hub for Tourism

The Launch of the LOGet Card project had been planned for spring, but was delayed due to the coronavirus pandemic. Domestic tourism is beginning to stir again now that the nationwide state of emergency has been lifted, raising hopes that the cards will provide a welcome stimulus.

“Storynote produces scenarios, and we want to do our bit for society through entertainment,” says Yamada. “Our aim isn’t simply to distribute LOGet Cards. Up to now, sightseeing spots have all been promoted piecemeal. With this project, though, we have created a coherent storyline. Given how badly the pandemic has affected tourism, we hope that our project will contribute to restoring some vitality to the industry.”

Yamada envisions the LOGet Cards helping to connect various sightseeing spots. For example, visitors who have gotten one card by visiting a castle might decide to go on to a nearby zoo or tower because cards are being distributed there; or they might hear that another castle in a nearby prefecture has its own card and make a plan to visit. And avid card collectors may plan an entire itinerary around their quest to accumulate LOGet Cards.

While few foreign tourists are expected for the foreseeable future due to pandemic-related entry restrictions, cards have been produced for Takashima Castle in Suwa, Nagano Prefecture, in English and traditional Chinese and for the Gunkanjima Digital Museum in Nagasaki Prefecture in English, and more foreign-language versions are being planned. This novel offering from Japan, known for its toys and electronic games, is sure to attract a lot of attention both at home and abroad. 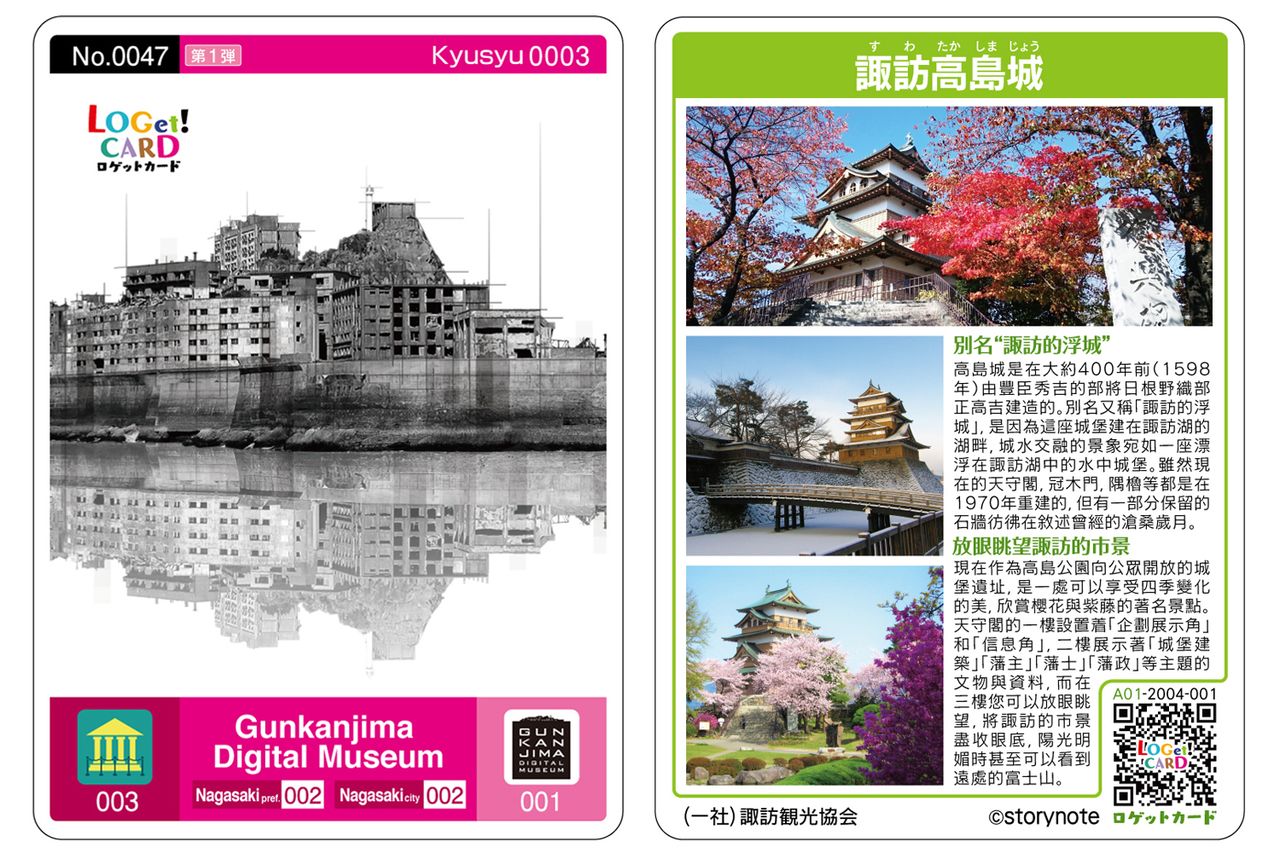 The front of the card for the Gunkanjima Digital Museum, in English, and the back of the card for Takashima Castle, in Suwa, Nagano Prefecture, in traditional Chinese. (Courtesy of Storynote) 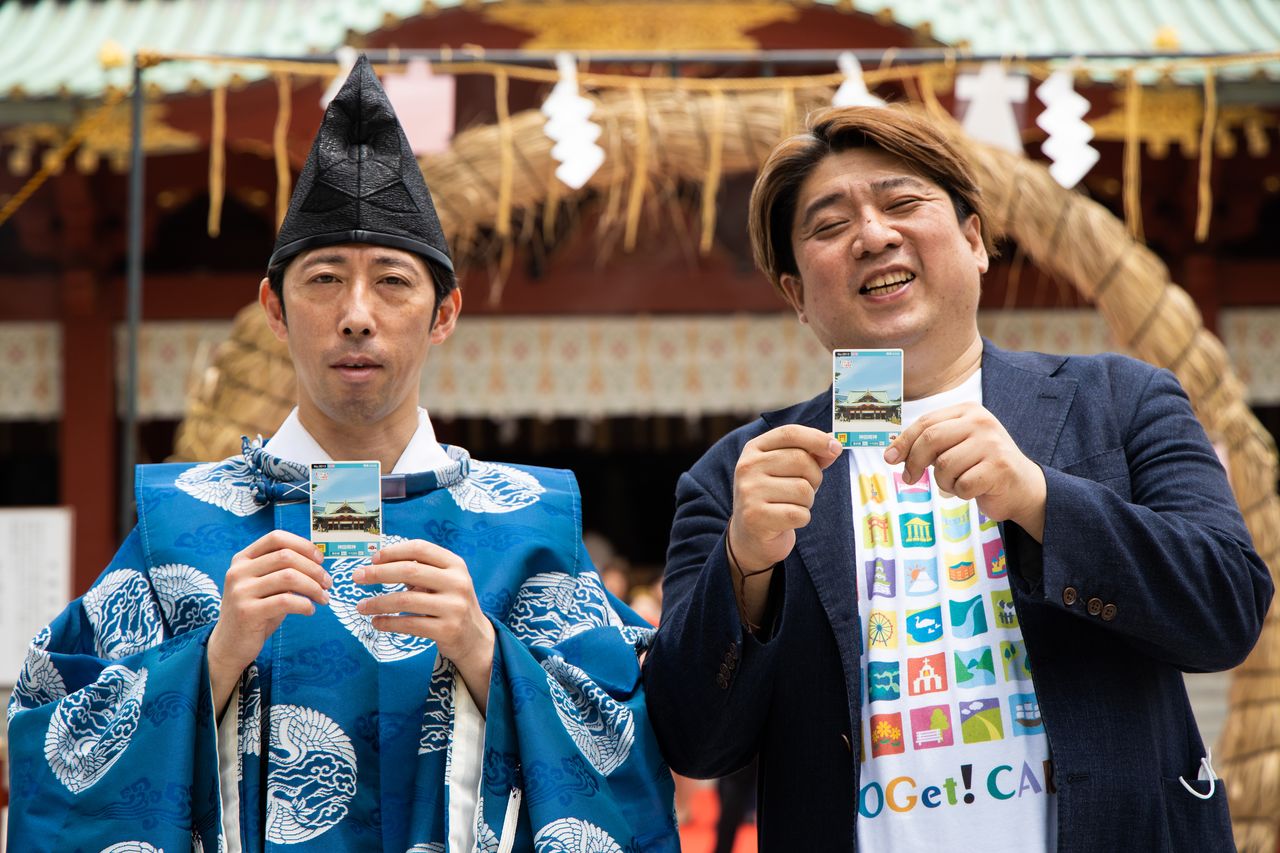 (Originally published in Japanese. Reporting, text, and photos by Nippon.com, except where otherwise noted.)