Culture Oct 25, 2017
Manhole covers with colorful designs depicting local characters or scenic and historical spots have become a popular attraction for both Japanese and international tourists. Spots of beauty can be found literally underfoot. Find 12 top designs here, and an introduction to collectible “manhole cards.”

Nippon.com has picked some of the best manhole cover designs from around Japan for your viewing pleasure. 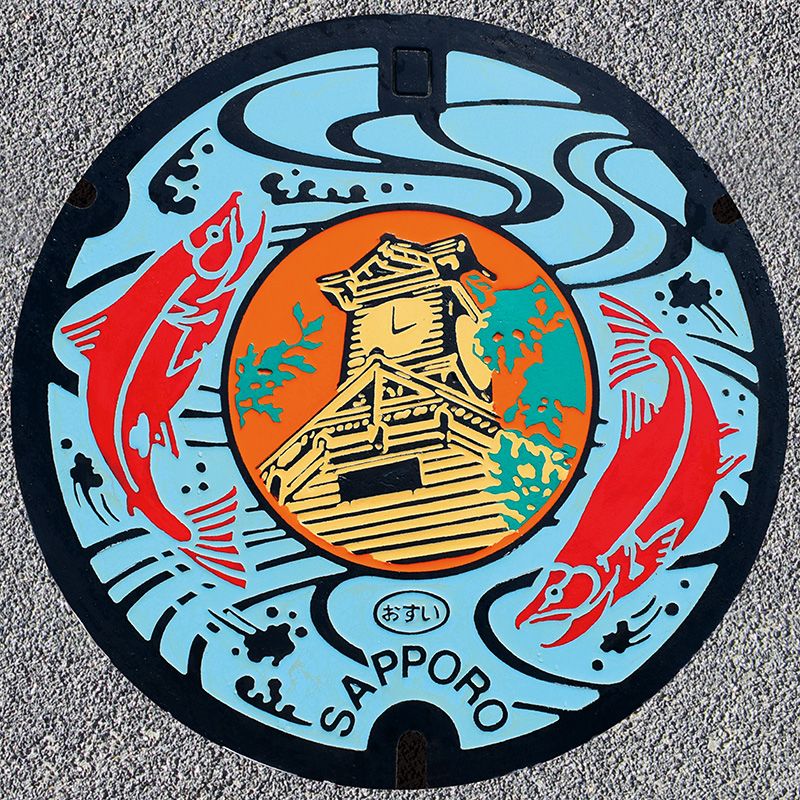 Salmon are known by Hokkaidō’s Ainu people as the “fish of the gods.” They have been returning to the Toyohiragawa river in Sapporo thanks to improved water quality, due in part to the sewer system. In this cover design, salmon swim around the Sapporo Clock Tower, a symbol of the city. 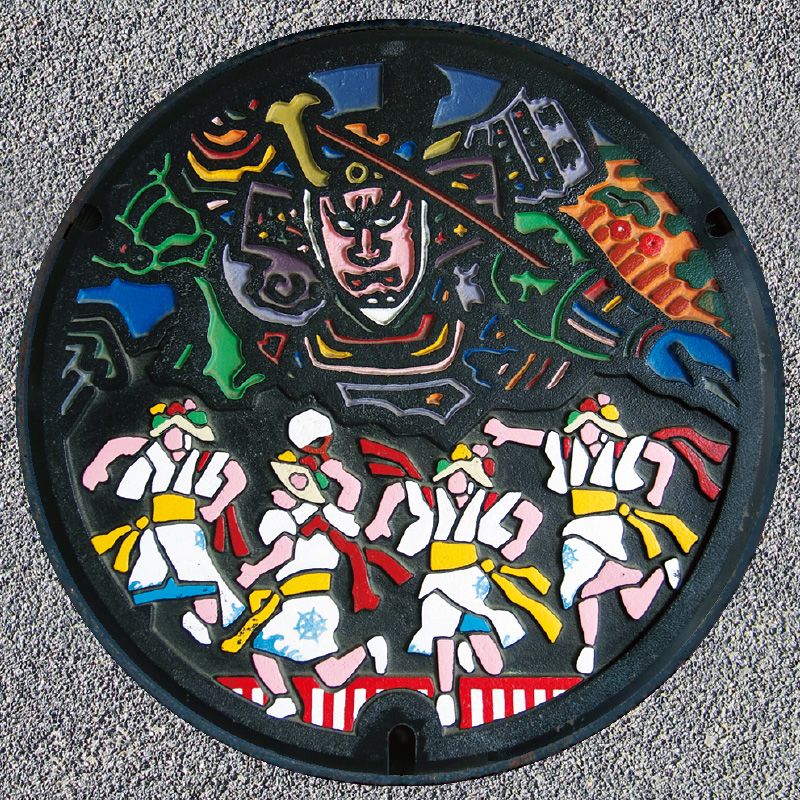 Aomori’s famous Nebuta Festival is held at the beginning of August each year. This cover depicts a large festival float modeled on a warrior, and dancers in costumes and flower hats. 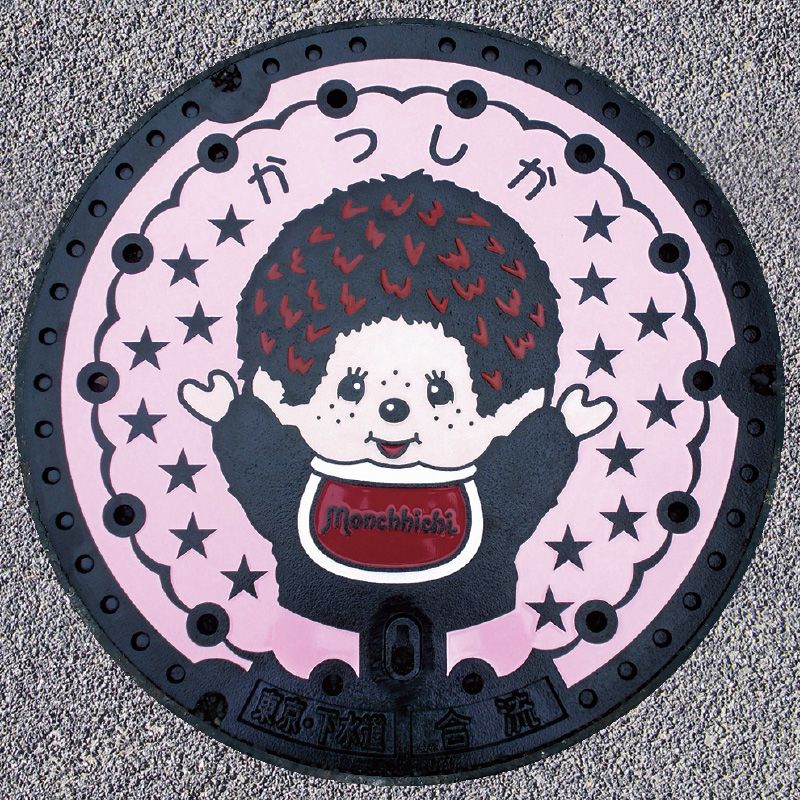 The popular Monchhichi monkey characters are from Katsushika in northern Tokyo. They have a park named after them and feature on local buses. Monchhichi manhole covers are being installed in 10 locations around Shinkoiwa Station from 2017. 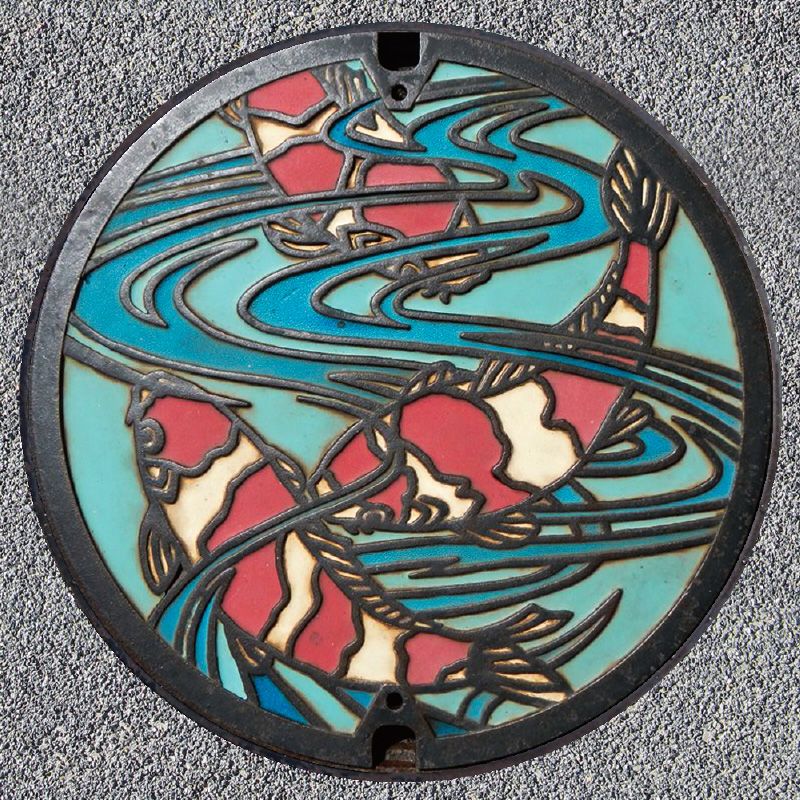 Nishikigoi brocaded carp were first bred in the city of Ojiya. They now come in some 100 varieties and have enthusiasts around the world. They are also the city’s official fish, appearing in this colorful cover design. 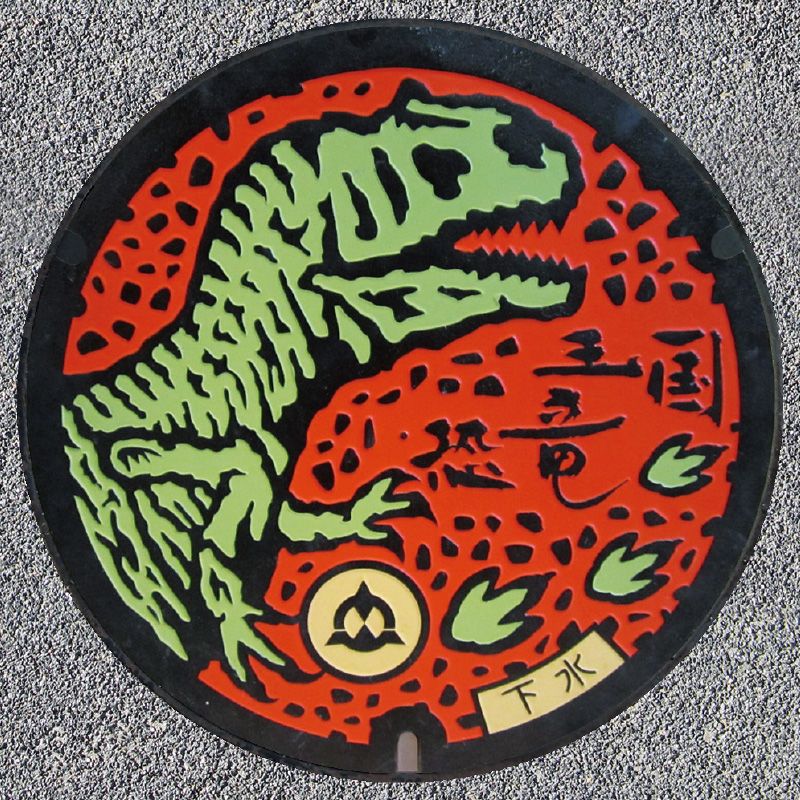 The city of Katsuyama is the first place in Japan where dinosaur fossils were discovered, and home to the Fukui Prefectural Dinosaur Museum. This manhole depicts the fearsome fukuiraptor. 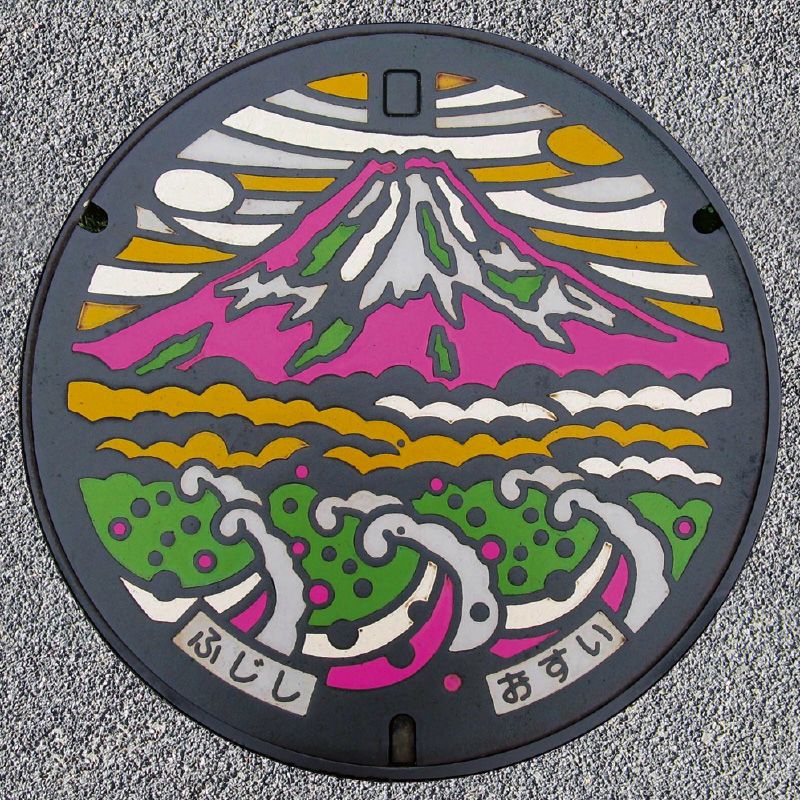 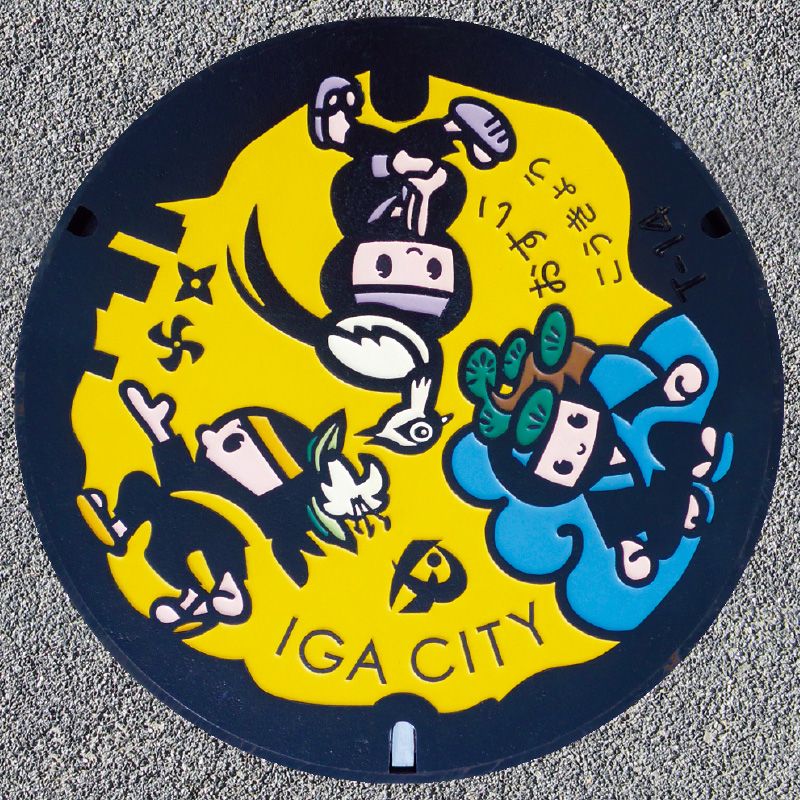 Ninja culture lives on in Iga, a castle town that retains the atmosphere of past days. This cute design features the ninja the area is famous for together with the city flower, tree, and bird: the bamboo lily, Japanese red pine, and pheasant. 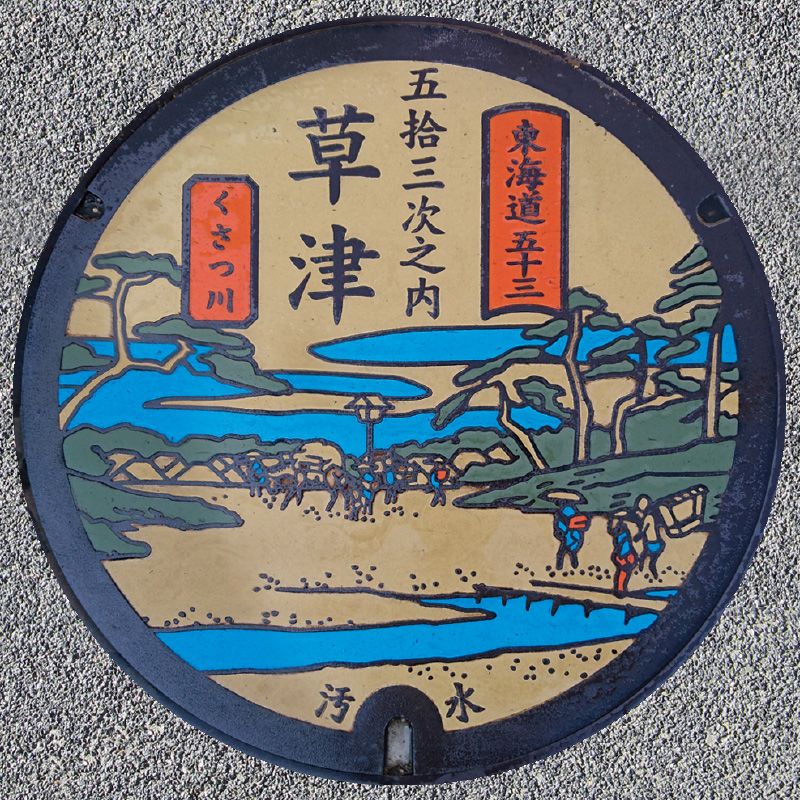 The motif here is the Kusatsu illustration from Fifty-Three Stations of the Tōkaidō by ukiyo-e artist Utagawa Hiroshige. The settlement flourished at the junction of two major national routes, the Tōkaidō and Nakasendō, during the Edo period (1603–1868). 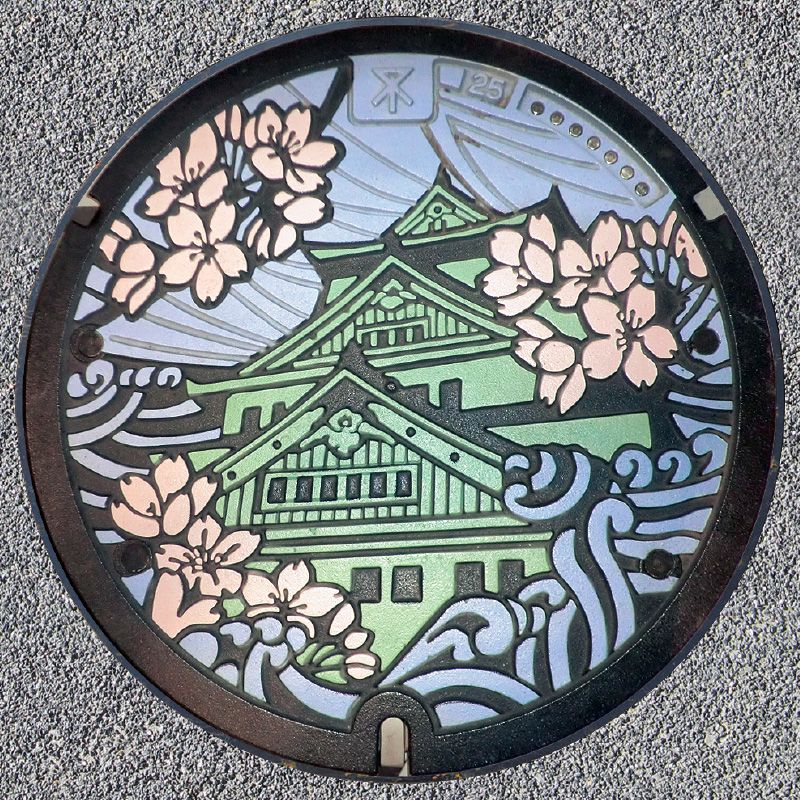 Osaka developed as an economic and cultural center, but also prospered as a water transport hub. This cover design displays Osaka Castle in cherry blossom season. 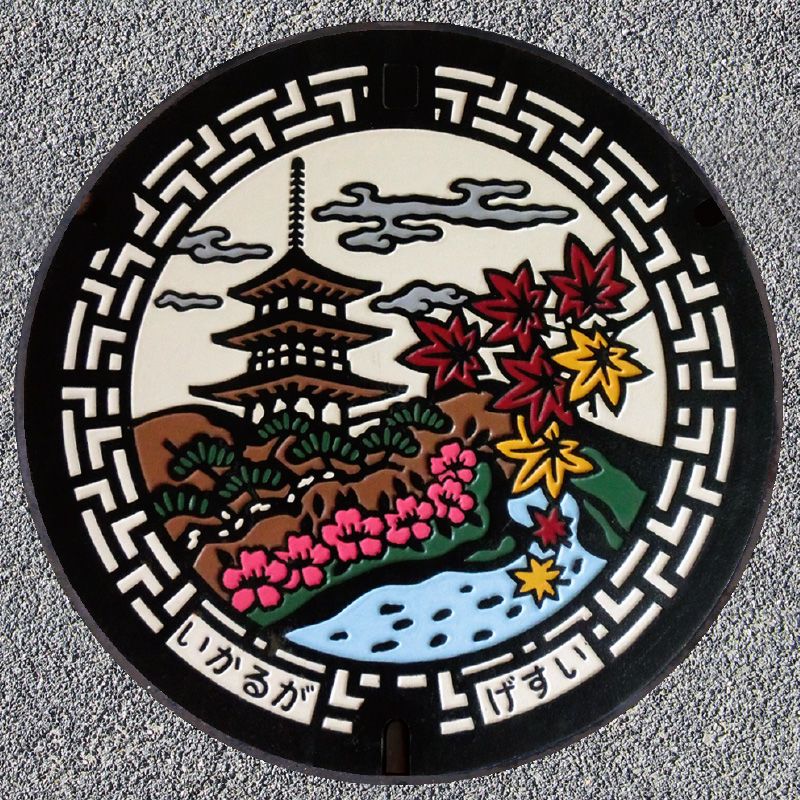 The temple Hōryūji was originally built some 1,400 years ago and includes one of the oldest wooden buildings in the world. This design also portrays the Tatsutagawa river, autumn leaves, black pines, and sasanqua camellias. 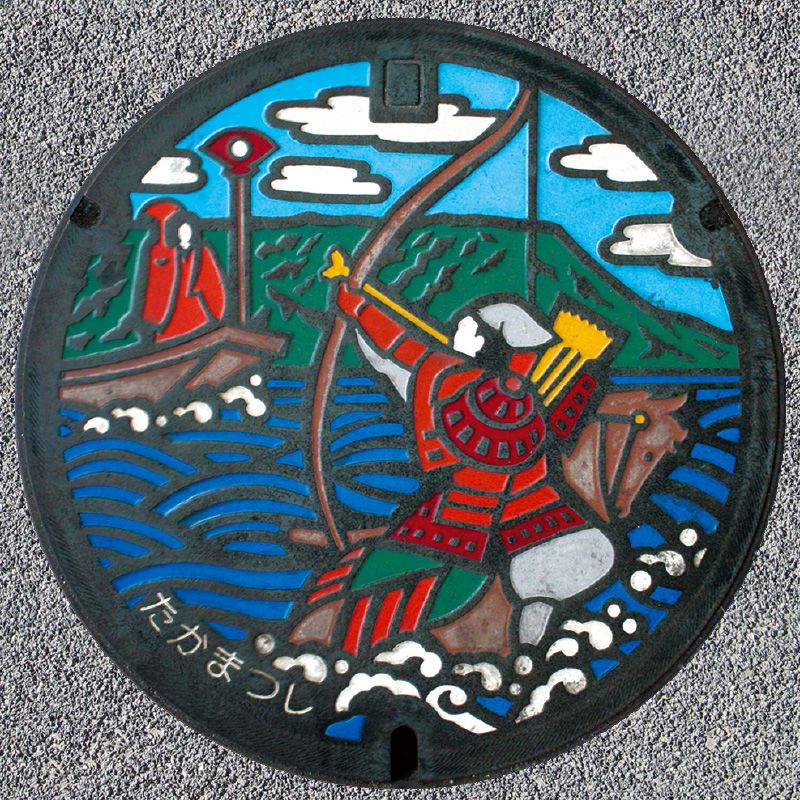 In the 1185 Battle of Yashima, samurai Nasu no Yoichi of the Minamoto clan is said to have performed a spectacular archery feat in shooting an arrow through a fan raised on a distant ship belonging to the enemy Taira. The legend is depicted on this cover in nearby Takamatsu. 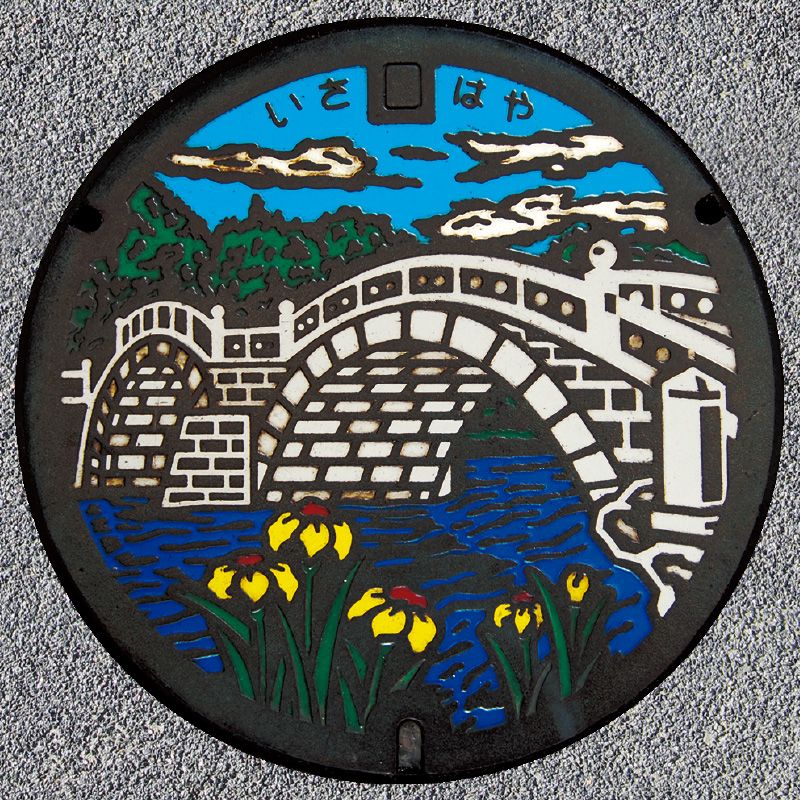 A larger version of its more famous namesake in the city of Nagasaki, Isahaya’s Spectacles Bridge was chosen as Japan’s first Important Cultural Property. Sweet flags bloom in the foreground of the design.

Japan’s first manhole covers with pictorial designs were made for Expo ’75 in Okinawa. They had a simple fish pattern. Today, sometimes elaborate designs can be seen across Japan, expressing local pride. 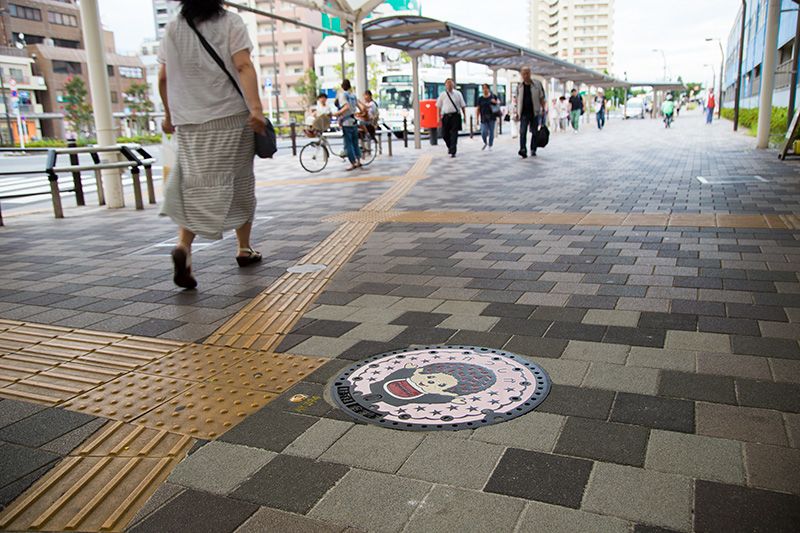 A design manhole in Katsushika, Tokyo, where the company that manufactures Monchhichi is located. Photo by Nippon.com editorial department.

The idea was based on his own experience as a child of being engrossed in collecting stickers and cards. Distribution began in April 2016. 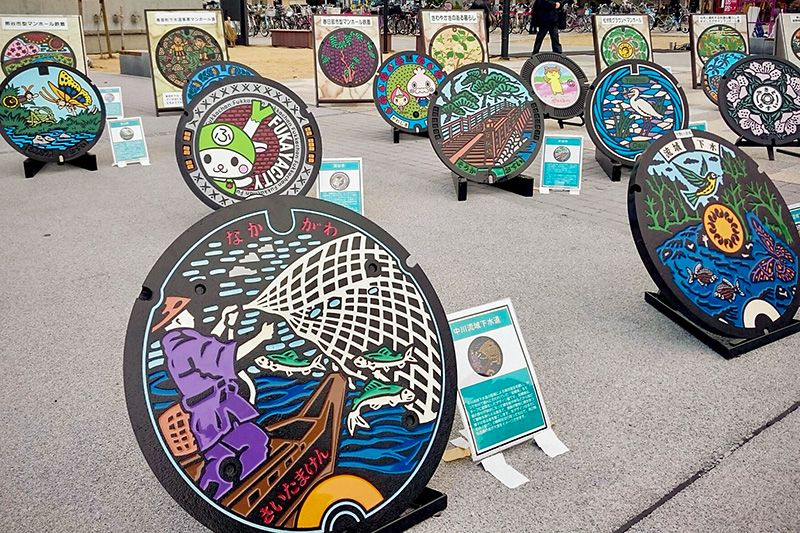 A manhole summit was held in January 2017 in the city of Kawagoe, Saitama Prefecture. Visitors were welcomed by 58 different design manholes from within the prefecture.

The front of the cards shows a photo of a manhole cover and information on its location, while the back gives an explanation of the design and its origin. The cards are free, but are only distributed at city offices, waterworks offices, or tourist information centers near the location of the manholes. In other words, possessing a manhole card is evidence that you have visited the place.

The cards also have pictograms that show the serial number, regional block number, and design category. This way fans can collect cards however they please, such as first collecting only cards in the Kantō block or getting all the cards with a local mascot character. 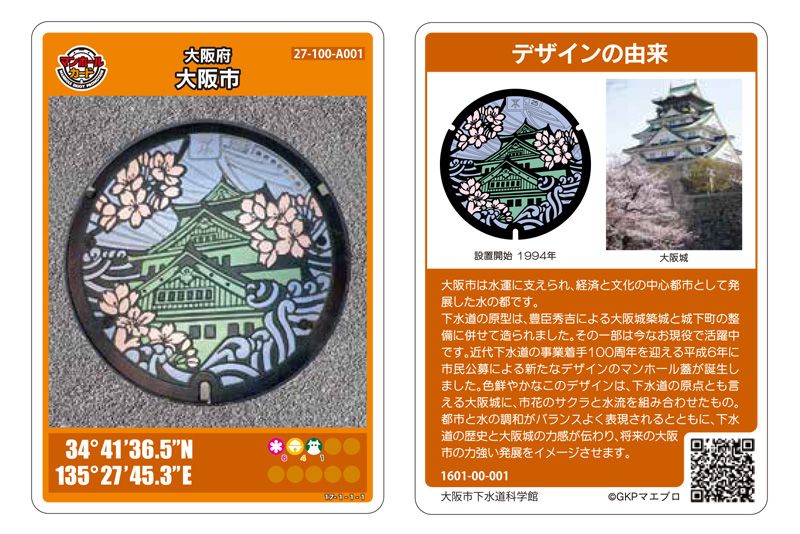 The front of a card is shown on the left, and the back on the right.

There are now 222 varieties of card from 191 local governments, and about 1 million have been issued to date. New cards are created each year. 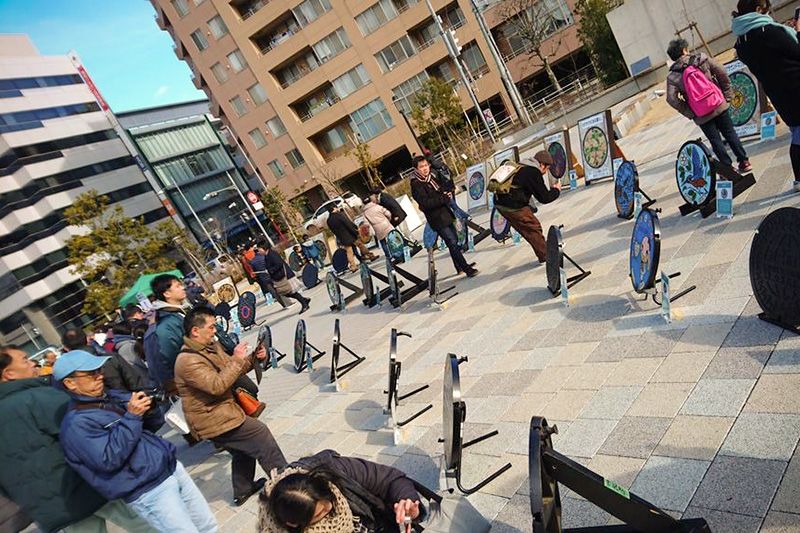 (Originally published in Japanese on September 8, 2017. Text by Suzuki Naoto. Photographs courtesy of Gesuidō Kōhō Platform except where otherwise stated.)