Culture Dec 8, 2016
A new museum dedicated to Japan’s artistic giant Katsushika Hokusai (1760–1849) has opened in the municipality of Sumida in Tokyo. Best known for his iconic print The Great Wave off Kanagawa, Hokusai was an important influence on Western artists like Monet and Van Gogh.

Katsushika Hokusai (1760–1849) is arguably Japan’s most famous artist. Works like The Great Wave off Kanagawa and Rainstorm Beneath the Summit from his Thirty-Six Views of Mount Fuji series are recognized the world around. Hokusai’s genius, however, runs deeper than just these prints. A new museum in the heart of Tokyo allows visitors to explore the rich life and creations of the artist. 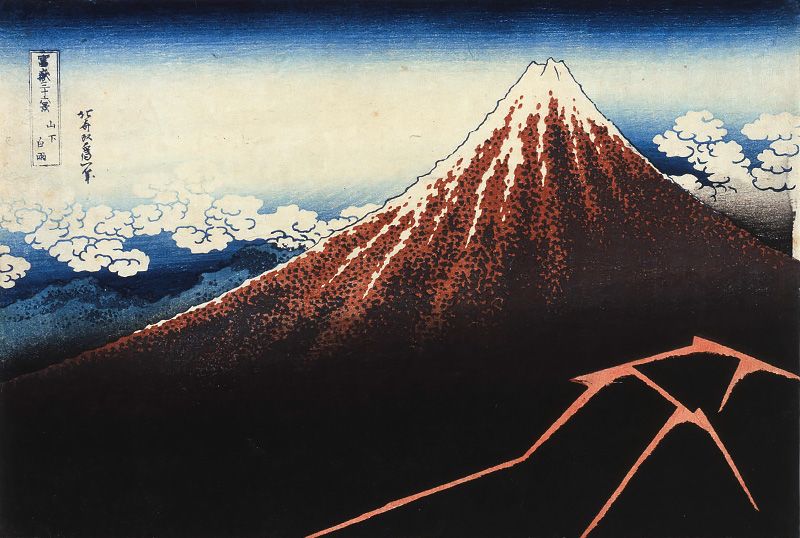 Fugaku sanjūrokkei: Sanka hakuu (Thirty-Six Views of Mount Fuji: Rainstorm Beneath the Summit) by Katsushika Hokusai. From the Sumida Hokusai Museum collection. The lightning in the bottom right inspired the museum’s logo.

The Sumida Hokusai Museum opened its doors on November 22, 2016. The new four-story building, constructed close to the great artist’s birthplace, is located a few minutes’ walk from Ryōgoku Station and the nearby Edo-Tokyo Museum and Ryōgoku Sumō Hall in the municipality of Sumida.

The museum’s ambitious design is the work of world-renowned architect Sejima Kazuyo. Her previous projects in collaboration with Nishizawa Ryūe at the firm SANAA include the 21st Century Museum of Contemporary Art, Kanazawa (2004); the New Museum of Contemporary Art, New York (2007); and the Louvre-Lens (2012). These have been praised for their originality and refined form, and no doubt the Hokusai Museum will join them in receiving similar acclaim.

The outside of the building is composed of several geometric blocks covered with aluminum panels that shine like mirrors in the sunlight. The interior is also surprisingly bright. The first floor has a glass-walled conference room, a library, and the museum shop. There are meeting and storage rooms in the basement. 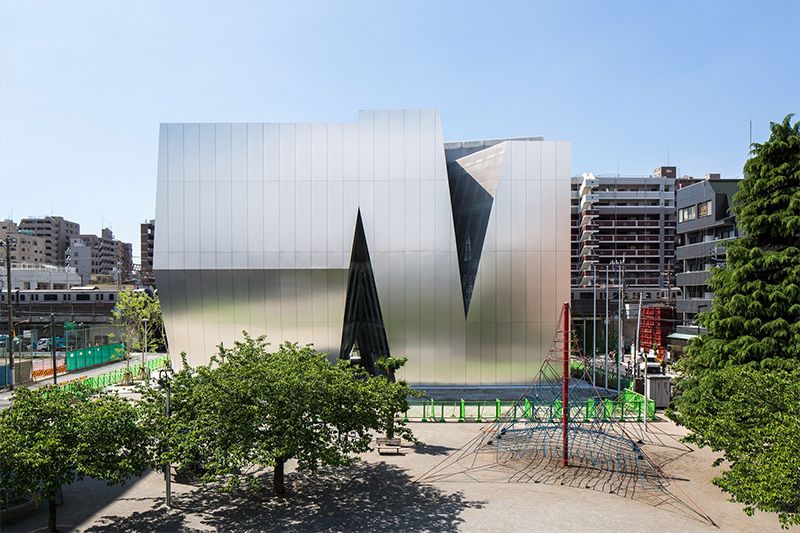 The tour begins on the fourth floor with the permanent exhibition, where the artist and his daughter await visitors in their humble studio. The two animated wax models, working on a painting together, are based on known portraits of Hokusai and his daughter Oei, who also produced artworks under the name Ōi.

Amid streams of light that evoke the flow of the nearby Sumida River visitors journey through Hokusai’s life, gazing at episodes from his past and replicas of his paintings and prints. The exhibit combines education and entertainment with touch screens introducing the artist’s works. These include one based on the famous manga Hokusai created for his students and others wishing to improve their drawing skill.

On leaving this room, visitors can enjoy a view of the 634-meter high Tokyo Skytree before proceeding to the rotating exhibition on the third floor. 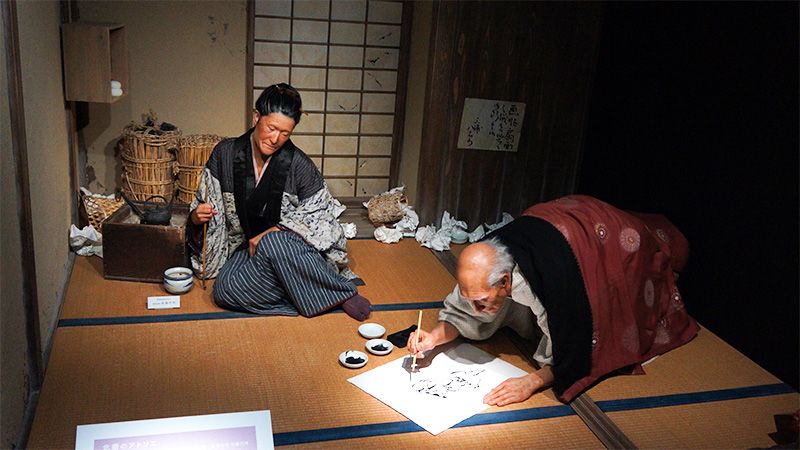 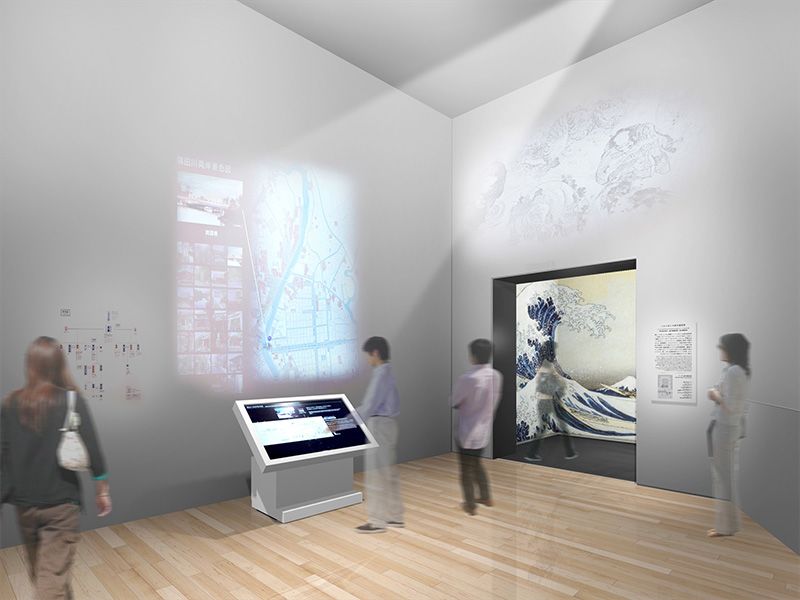 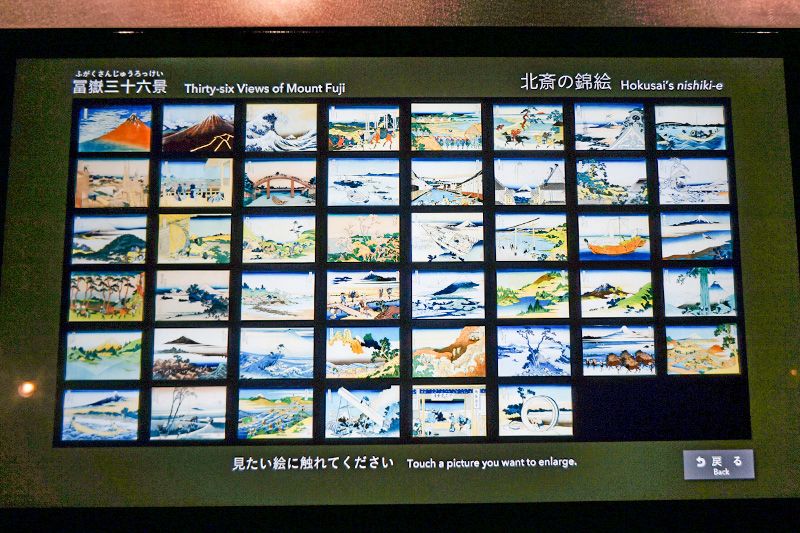 Visitors can explore Thirty-Six Views of Mount Fuji and other series using the touch panels.

The museum currently has more than 1,500 works in its collection that consists of a legacy from leading art history specialist Narasaki Muneshige (1904–2001), artworks formerly owned by collector Peter Morse (1935–93), and numerous paintings and prints acquired by the municipality before the museum was built. The facility also plans to hold exhibitions of works from museums in Japan and around the world.

The first temporary exhibition Hokusai no kikan (Hokusai’s Return) features 120 works, including some of the artist’s most famous creations. The jewel in the crown is a seven-meter long emaki picture scroll displaying a panoramic view of the Sumida River. This belonged to the art dealer Hayashi Tadamasa (1853–1906), a friend and advisor to foreign Japanophiles and who supported Edmond de Goncourt (1822–96) in the French writer’s 1896 study on Hokusai. The scroll went missing after appearing in a 1902 sales catalogue of Hayashi’s collection of Japanese and Chinese art, and its whereabouts were unknown for many years. When it resurfaced at a London auction in 2008 the museum purchased it, returning it to Sumida after more than a century away. 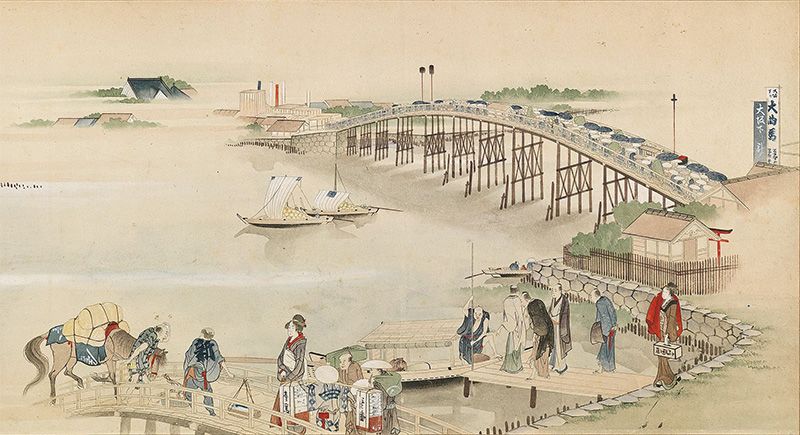 Detail showing the area near Ryōgoku Bridge from Sumidagawa ryōgan keshiki zukan (Scroll Painting of Scenery on Both Banks of the Sumida River) by Katsushika Hokusai. From the Sumida Hokusai Museum collection.

Detail showing a room in the courtesan district of Yoshiwara from Sumidagawa ryōgan keshiki zukan (Scroll Painting of Scenery on Both Banks of the Sumida River) by Katsushika Hokusai. From the Sumida Hokusai Museum collection.

Other exhibits at the museum include portraits of Hokusai and works depicting everyday activities in Sumida during the artist’s lifetime.

There are several surimono—woodblock prints privately commissioned for special occasions—carefully embossed or embellished with gold and silver. There are also many of the Hokusai’s most famous prints, including some from the Thirty-Six Views of Mount Fuji series that inspired nineteenth-century Western artists such as Monet, Degas, Manet, and Van Gogh. 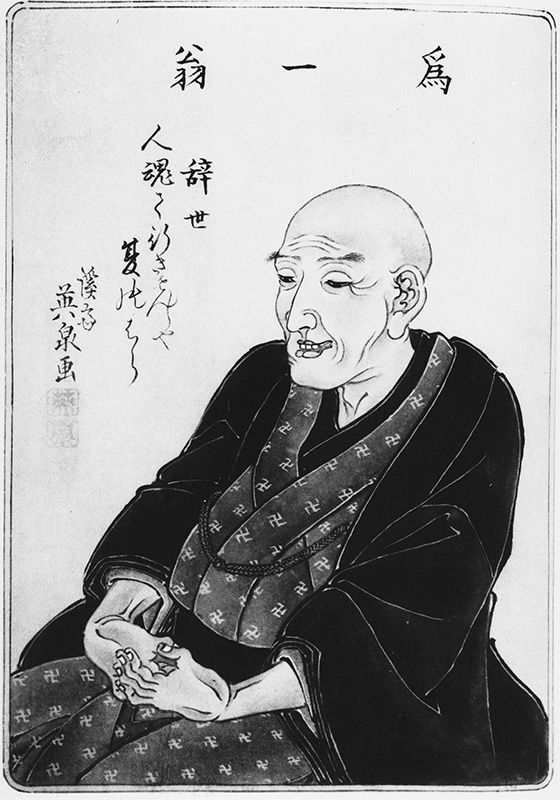 Portrait of Hokusai by Keisai Eisen. From the Sumida Hokusai Museum collection.

As an artist who sought perfection, Hokusai was always dissatisfied with his creations and would surely be astonished at the acclamation his work have received. In a famous postscript to his 1834 collection One Hundred Views of Mount Fuji, he wrote:

“At the age of 90, I will come closer to the essence of art, at 100 I will reach the level of the divine, and at 110 each point and line will have a life of its own. I hope the gods of longevity will grant me the time to confirm the truth of my words.

Hokusai did not achieve his desire, dying in his eighty-ninth year in 1849. He did, however, succeed in influencing artists throughout the world. The Sumida Hokusai Museum is part of this legacy and will undoubtedly delight visitors of all ages from both Japan and overseas.

(Originally published in French on November 22, 2016. Banner image: Detail showing a room in the courtesan district of Yoshiwara from Sumidagawa ryōgan keshiki zukan (Scroll Painting of Scenery on Both Banks of the Sumida River) by Katsushika Hokusai. From the Sumida Hokusai Museum collection.)