Culture Sep 24, 2012
A young American returns to Aomori to take part in the 2012 Nebuta Matsuri. A report on the spirit and history behind Tōhoku’s most thrilling summer party. 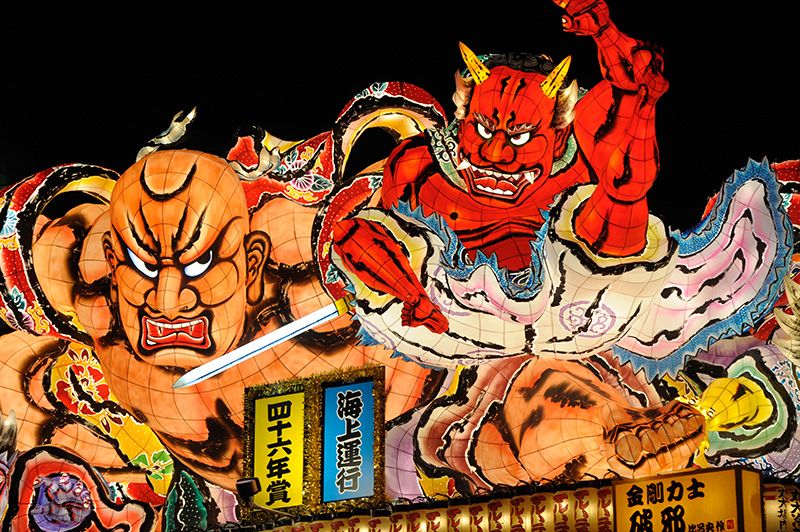 When I lived in Aomori City from 2003 to 2006, I got a taste of just how fleeting the northern Tōhoku summers can be. In early August 2012, I returned to Aomori for the first time in three years to take part in the unquestioned highlight of the season, the Aomori Nebuta Matsuri.

Aomori Prefecture abounds in the sort of beauty typical of rural Japan: orderly pastoral landscapes and rolling mountains. Big and bold, the Nebuta Matsuri forms a dramatic contrast with this tranquil setting. It is a festival of bright lights and exuberant celebration, when the rhythms of taiko drums, screeching flutes, and hand cymbals stir the blood and dozens of festival floats (nebuta) set the main streets of the city colorfully ablaze. For a few days, energy and excitement run riot through the normally quiet city.

When I arrive at Aomori Station after the 3.5-hour journey by shinkansen from Tokyo, I’m surprised to see how many new buildings have gone up since I left. But the speakers in the station are already broadcasting the familiar rhythms of the festival, and I feel as full of Nebuta spirit as if I’d never left.

My first stop is the Nebuta Koya, the large sheds where the famous floats are built and repaired and where they rest between parades. This is the first time I’ve seen the floats standing stationary—and during daylight hours. The humble setting seems to deprive the floats of some of their usual grandeur.

A short walk around the bay, I arrive at my next stop. Named after the words of the famous festival chant, “Wa Rasse” is a city-run information center where visitors can get a taste of the festival all year round. The visually impressive building, located just a stone’s throw from Aomori Station, is new since my last visit. Several floats from previous years’ festivals are on display here, shining like lanterns in a cavernous black room. Even standing still, the floats regain much of their majesty in their natural environment—in the dark, and lit from within.

I’ve come to Wa Rasse to take part in a quick primer on two of the key roles in the Nebuta parade: the hayashi, who drive the parade with the rhythm of their taiko drums, hand cymbals, and flutes; and the leaping, dancing, shouting haneto, the role I’ll be playing this year.

Haneto are the costumed dancers who accompany the floats. Tens of thousands of people take part each year. The dance is as simple as it comes: hop twice on one foot, then twice on the other, though there’s plenty of room for flourish. Part of what makes the Aomori Nebuta Matsuri special is how easy it is to join the parade as a haneto. Any visitor is just a costume rental away from being a part of the parade.

Like many aspects of Nebuta, the origins of the haneto and their dance lie in folk traditions. One member of the Wa Rasse team suggests that the dance is intended to release cleansing energy in an effort to expel psychological burdens. 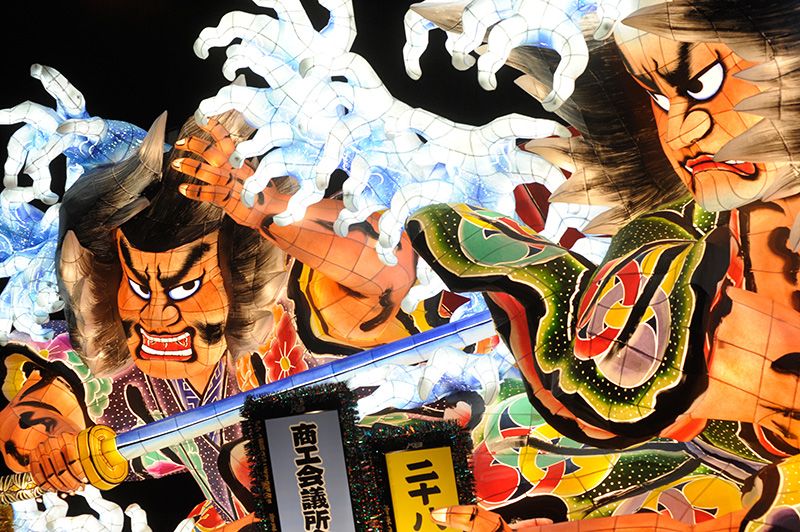 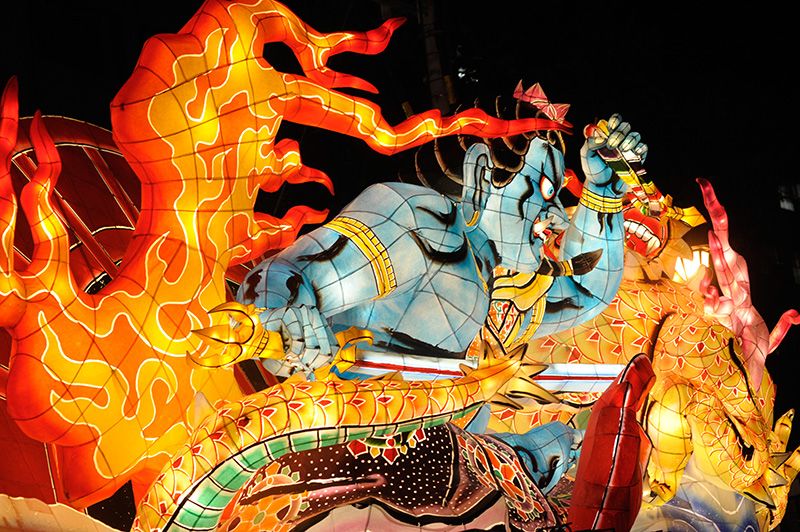 A little after seven in the evening, it’s time for the parade. My friends and I walk for nearly a kilometer along the parade route looking for a promising vantage spot. There is a rattle of pops and bangs overhead as a burst of fireworks marks the start of the parade.

For close to two hours, the parade rolls by. At last, here are the floats in their full shining glory, spinning and dipping and gliding over the roads, drawn by more than a dozen men. The experience is truly spectacular: the warm summer night, the crowd, the music and the chants and the overwhelming mass of the floats all at once. 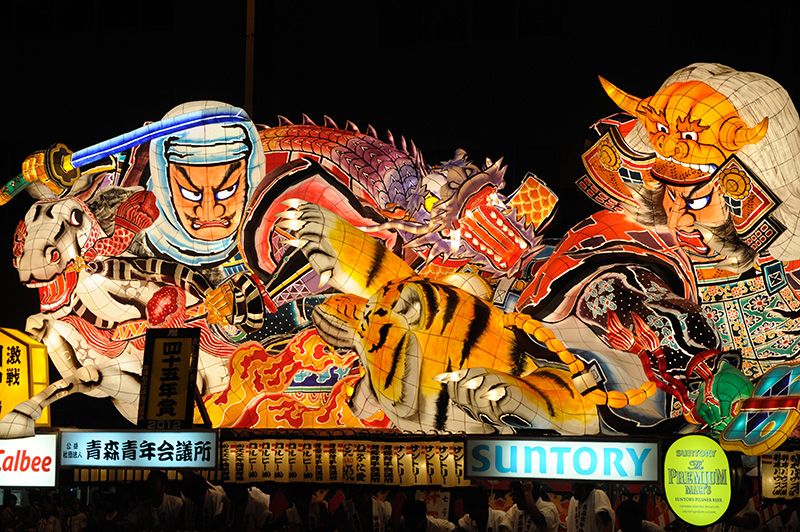 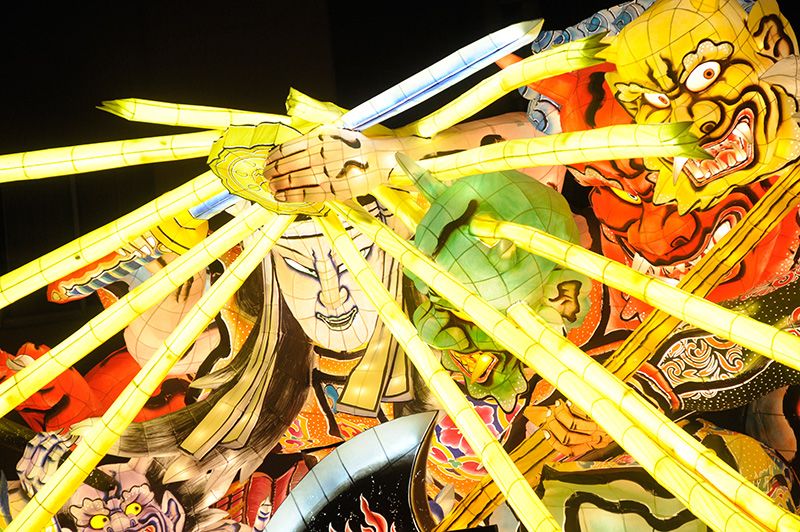 Almost twenty of the big floats and even more groups of hayashi and haneto pass. In no time at all, it’s over. The parade disperses and the floats head back to the Nebuta Koya to sleep until tomorrow.

The Story Behind the Floats 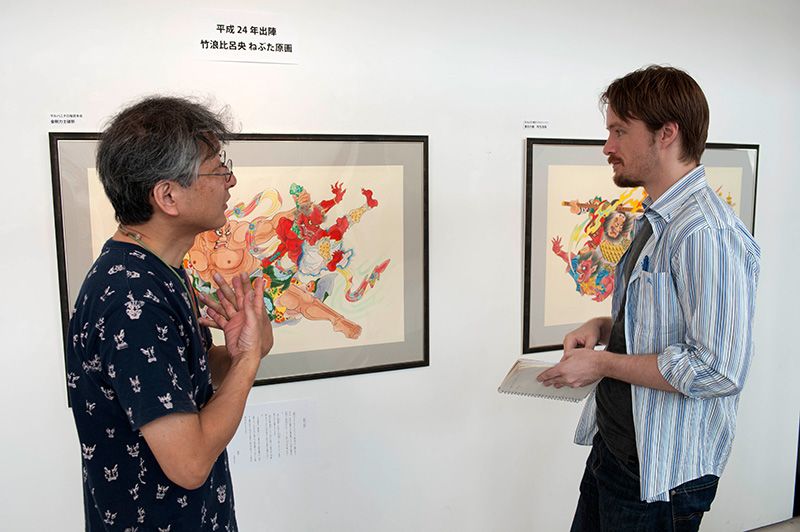 The next day, it’s my turn to join the parade. First, I have a chance to talk with Takenami Hirō, a prolific float designer and builder and the proud winner of this year’s Best Nebuta Creator Award. We meet at the Takenami Hirō Nebuta Research Center, a facility he founded to explore new possibilities for the nebuta as an art form and to share the cultural heritage of the festival with people around the world.

“I want people to enjoy the colors and shapes of the nebuta,” he says. Although Takenami himself has a wealth of information about the rich cultural background and history of the lanterns, he says that the uninitiated shouldn’t feel intimidated. “People should feel free to enjoy whatever aspects of the floats appeal to them,” he says. “The shapes, colors, whatever . . .” 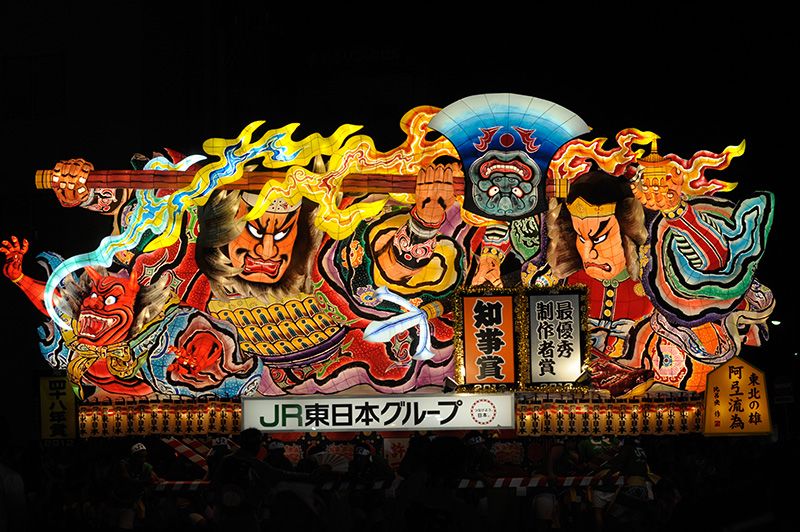 Takenami’s award-winning nebuta. The JR Nebuta Project also won second prize in the overall competition. The students and volunteers who helped to make and drive the nebuta are thrilled by the news. 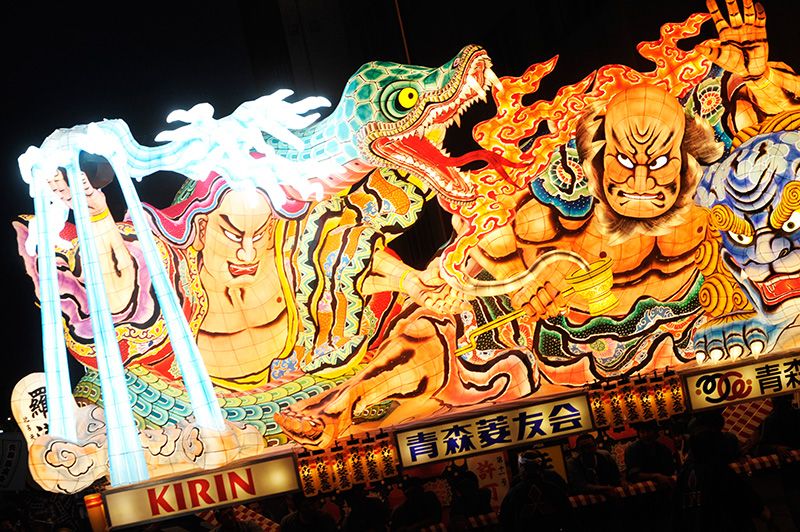 “Making the nebuta isn’t easy. But when I see them in action, I notice all kinds of things about them I hadn’t noticed before,” Takenaka says. There is a tendency in recent years to add more and more details to the backgrounds as well as to the main characters’ facial expressions. Teams discuss in advance how to maneuver the nebuta so as to bring out its colors and expressions and create an impression that will stay with people for a long time.

The designs of the floats owe a clear debt to East Asian mythology and history, but Takenami is no purist. He cites some surprising inspirations for his ideas: the Arabian Nights, fashion shows, even the recent Pirates of the Caribbean films.

A Day in the Life of a Haneto 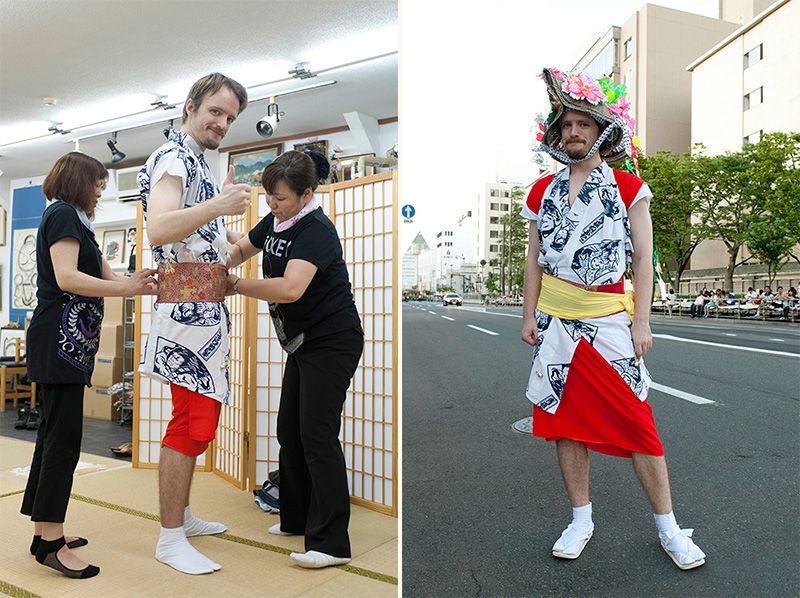 Nebuta is the busiest time of the year in Aomori, and today is a busy day for me as well. The day starts with a trip to Kōbeya, local kimono shop, to get kitted out.

The haneto costume is more or less standardized: it starts with an okoshi, which acts something like a slip, followed by the iconic white printed yukata. This is adorned with bells and a sash around the waist. Then the tasuki gake, a hand-tied harness of sorts that ties over the shoulders and around the back, hitching up the sleeves of the kimono. Add the traditional socks and sandals and all that remains is the crowning glory of the haneto costume: the hanagasa (flower hat).

The hanagasa is a traditional straw hat, pinched at the ends and decorated with brightly colored plastic flowers, with a bird perched improbably on top of the ensemble. I find the hanagasa a little cumbersome for dancing, so in the end I wind up tying a hachimaki cloth around my head instead.

Downtown, the parade is still some time off. But white yukata and multicolored sashes are already beginning to outnumber regular street clothes.

I manage to locate Kushibiki Junji, the leader of Sunroad Aomori Group. I thank him for letting me join in the celebrations, and offer my congratulations; Kushibiki’s group won the Nebuta Grand Prize and the Haneto Spirit Award this year. 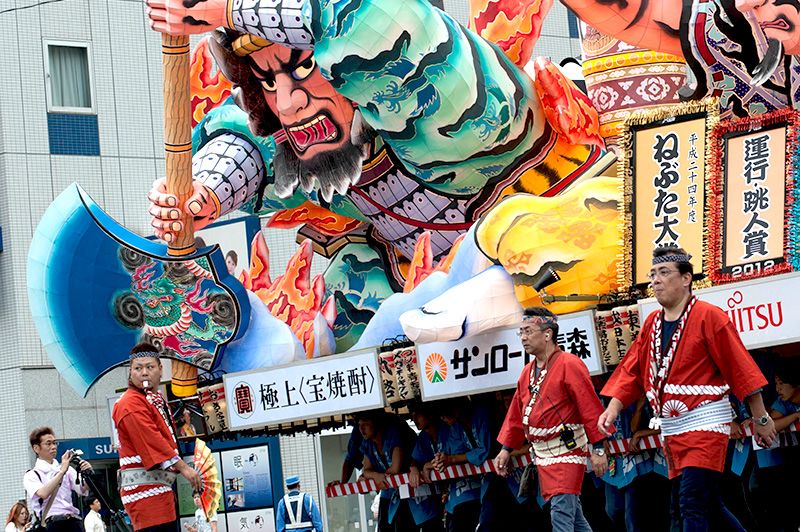 The Sunroad Aomori Group won the Nebuta Grand Prize. This was a second consecutive victory for Kushibiki. 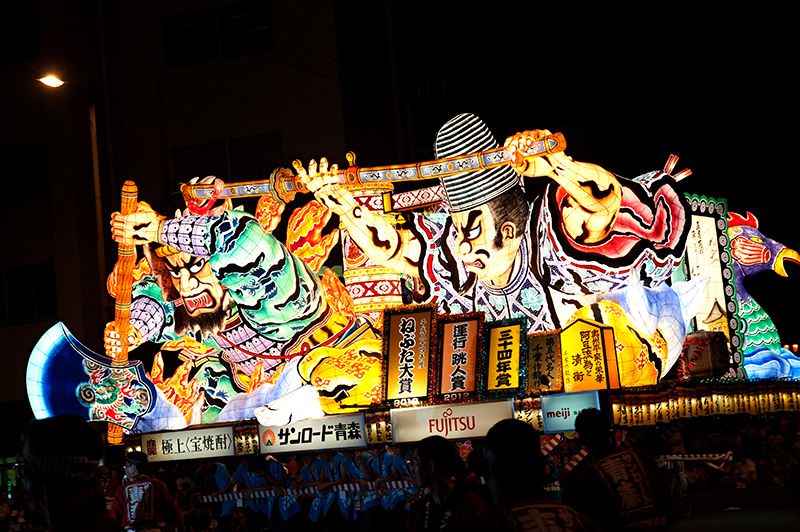 Soon, the city’s main east-west thoroughfare is closed to traffic and the floats move into place. A fellow haneto remarks on how strange it feels to be strolling casually down National Route 4. As we reach our starting point, the sky behind the parade lights up as the popping sounds of fireworks marks the start of the procession.

Our group’s hayashi go to work to provide the musical accompaniment, while the lead haneto at the head of the pack shout out the familiar call: “Rasse ra, rasse ra!” The hundred or so haneto around me spring into dance and respond in unison: “Rasse, rasse, rasse ra!” 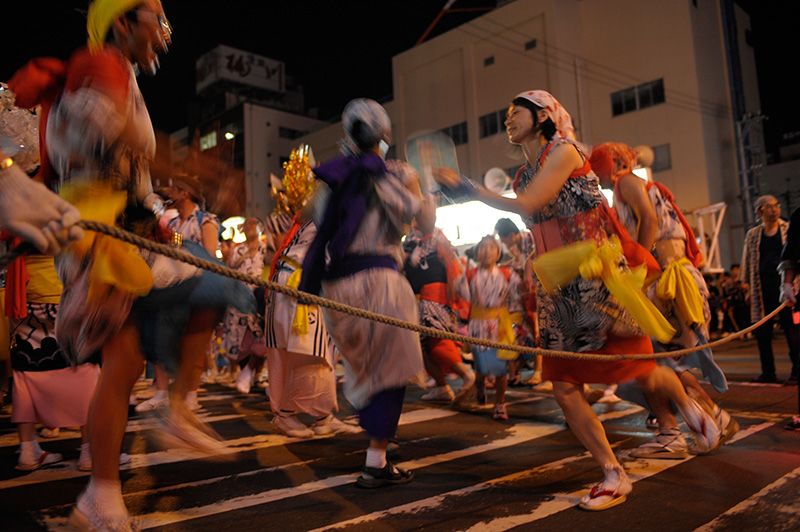 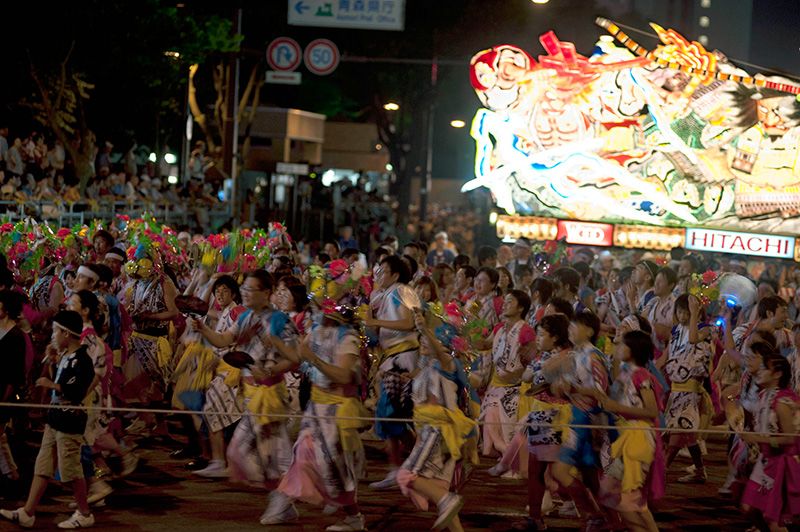 Spirits are high and it’s hard to resist the energy of the crowd. Countless times over the course of the parade I feel sure I have reached my limits. But each time a fresh round of “Rasse ra” rises up to restore my energy. Toward the end of the parade route, I even manage to lead the chant myself for a few rounds.

Two hours and nearly two kilometers later, we return to the corner where we started, exhausted but victorious, still keeping up a hoarse chorus: “Rasse, Rasse, Rasse Ra!” For several days to come, my ragged voice and sore calves will serve as a reminder of the whirlwind of excitement that sweeps up the city of Aomori and its surroundings every summer.

The next day is the last of the festival. The five top-rated floats are loaded by crane onto flat-topped boats to take part in a maritime procession in Mutsu Bay. As the winning floats make their victory parade, a fireworks display brings the festival to a fittingly rambunctious climax. Over the next few days, most of the floats will be dismantled and the city will resume the quieter rhythms of its daily life. It feels a little sad to see the excitement of Nebuta wind down for another year. 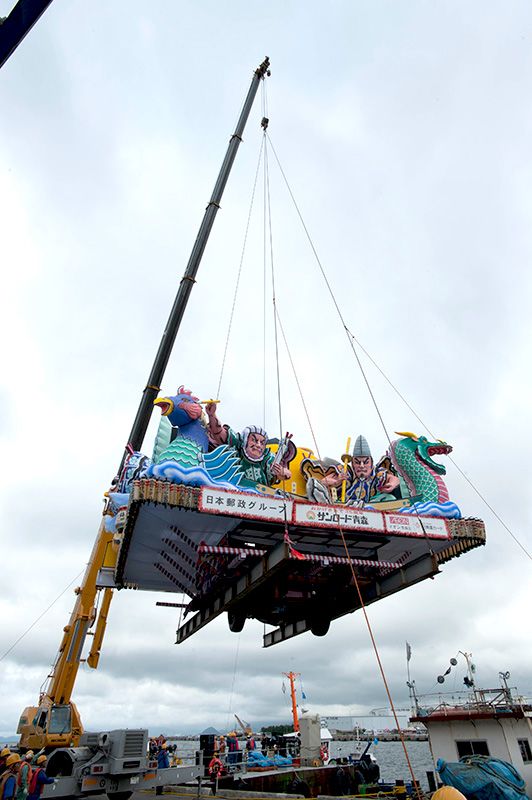 “Nebuta” are loaded onto boats. 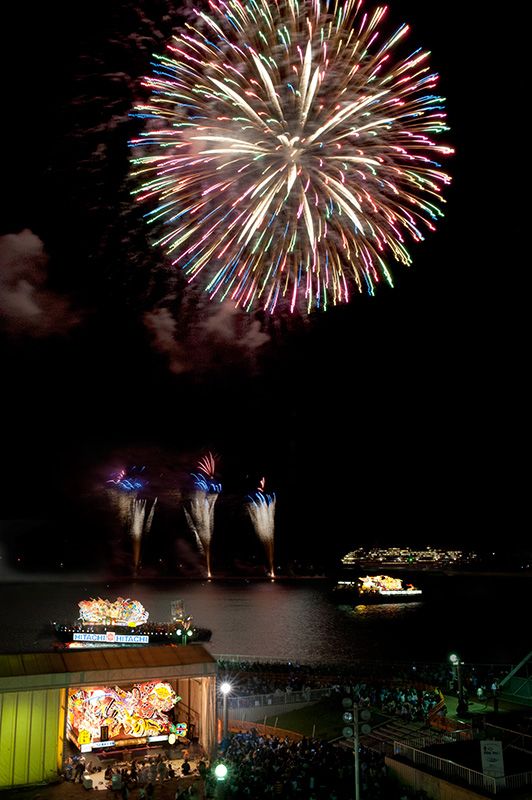 Past, Present, and Future

The precise origins of Aomori Nebuta are lost in the mists of time, but the festival’s history dates back at least several centuries. Now one of the best known and most distinctive festivals in Japan, Aomori Nebuta is constantly evolving.

Takenami Hirō recalls a much less structured parade in days gone by, when participants used to swig freely from buckets of sake lined up in front of major shops and department stores along the parade route. Takenami says many haneto used to get so raucous that their yukata were torn apart. A taxi driver told me a similar tale, saying he used to dance every year with a sake bottle in hand.

Although my own experience is much more limited, I have seen a number of changes since my first Nebuta in 2003. On the whole, this year’s festival felt more orderly and more family-friendly. Alcohol seems to have faded into the background, and the bawdy fools of the parade, the baketo, are much more subdued and less racy than I remember.

Float designs have changed too. The faces are more detailed, and many nebuta incorporate long thin forms stretching several meters across the float. I was told that some floats were lit with eco-friendly LED lamps this year. In what may be a hint of things to come, one float was equipped with an embedded Intel digital projector that allowed the face on the float to animate. No doubt competition will continue to push the creativity and craftsmanship to new levels in the years to come.

Takenami is working hard to bring the delights of the festival across new horizons. He has made a significant contribution himself to spreading Nebuta overseas, having built a float from scratch for a festival in Hungary and coordinated the complex logistical undertaking of dismantling a dozen or so of the paper-and-wire masterpieces and transporting them across the Pacific for display at a cultural festival in Los Angeles. With Aomori newly connected to Tokyo by high-speed shinkansen train, and well-appointed tourist facilities like Wa Rasse to lead the way, Aomori Nebuta is closer to the outside world than ever before.

I hope I can take part for many years to come. Maybe I’ll see you there. 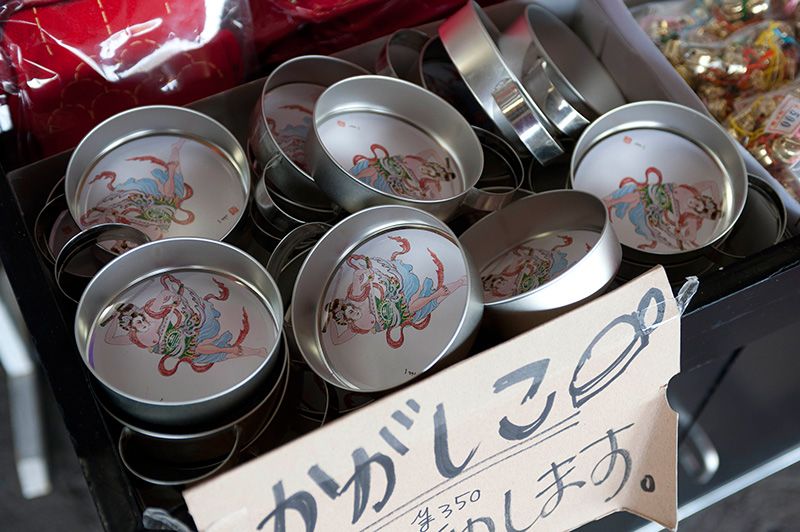 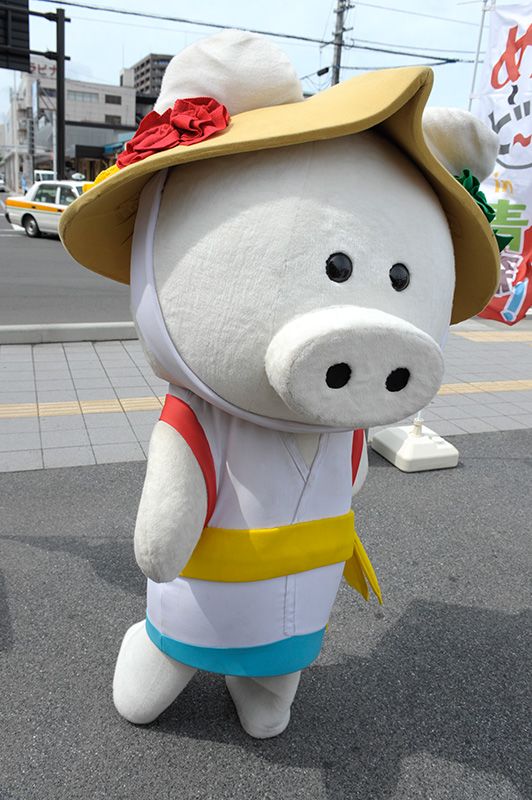 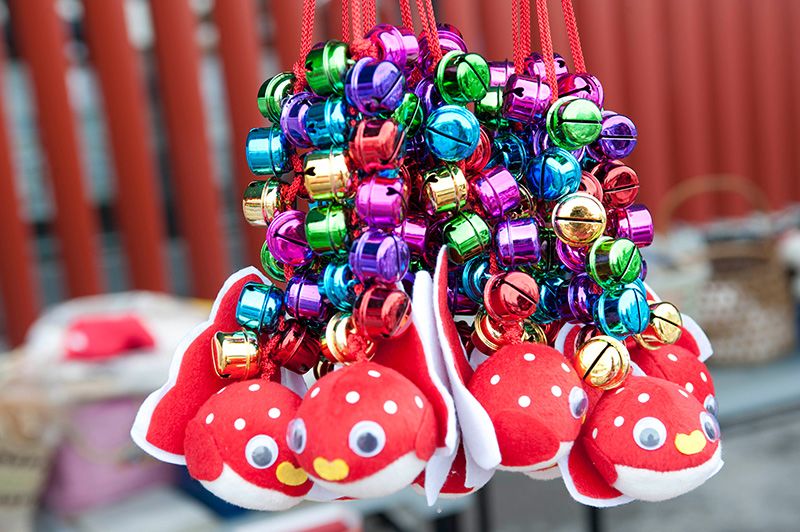 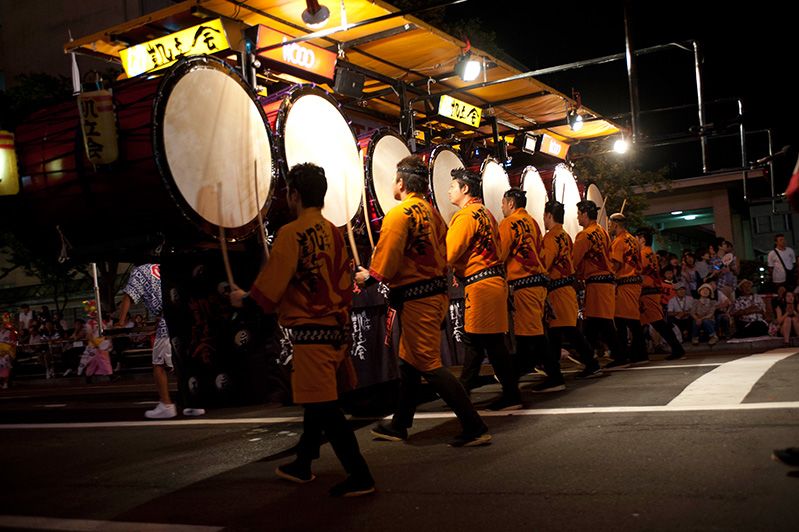 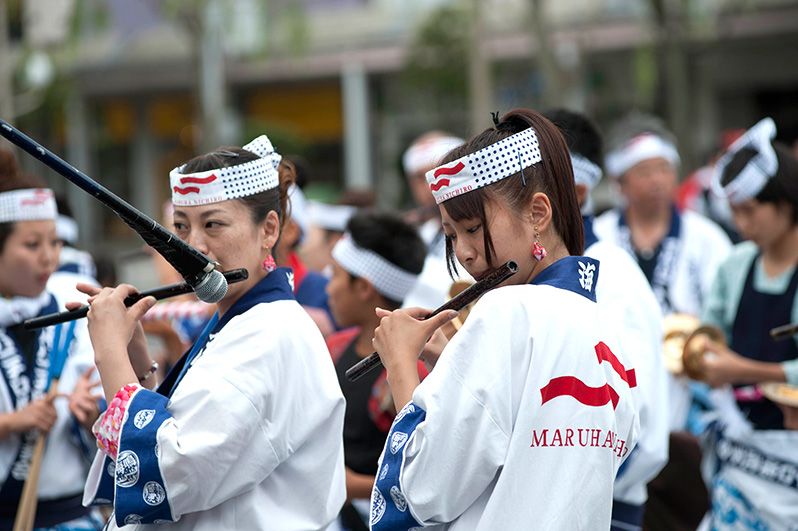 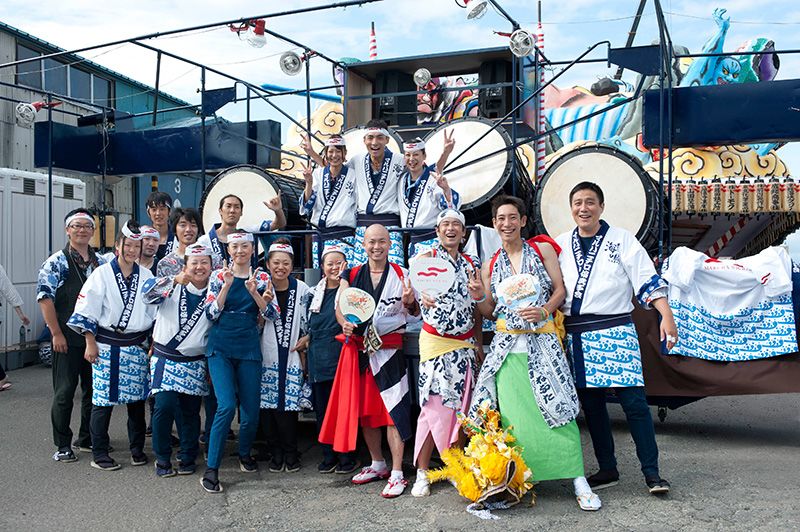 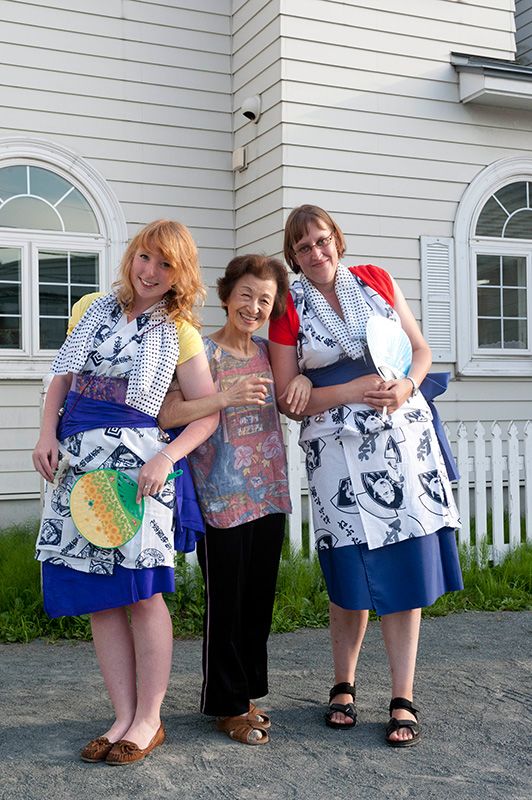 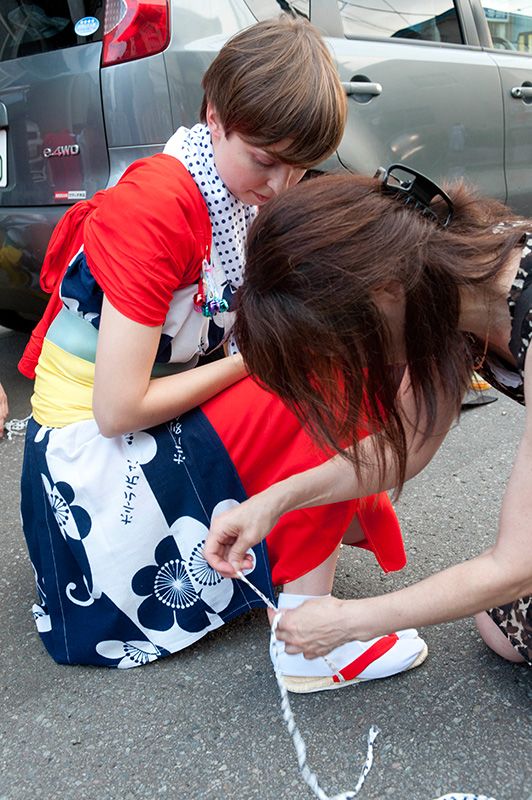 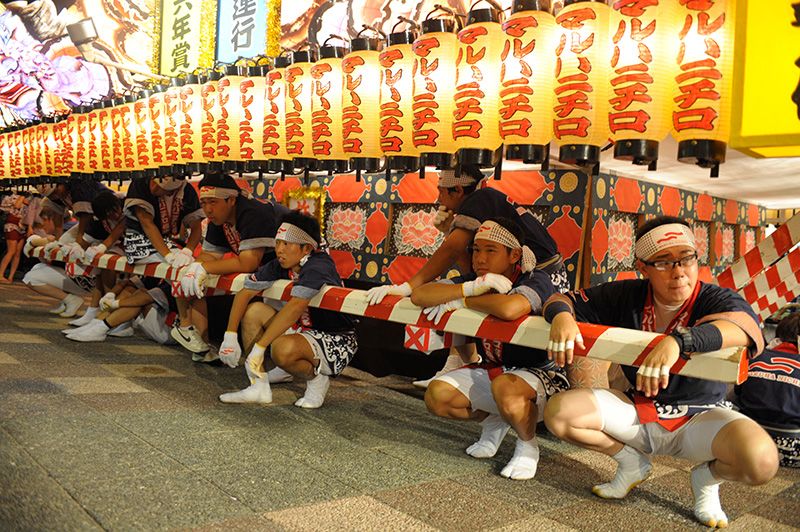 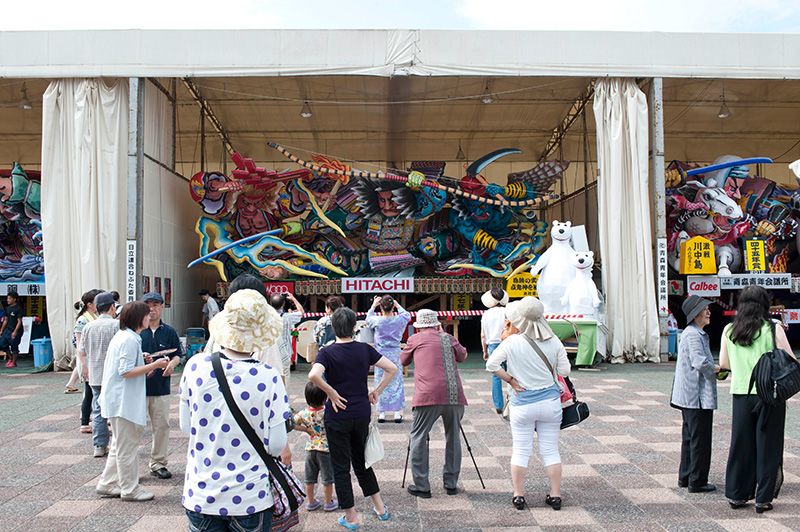 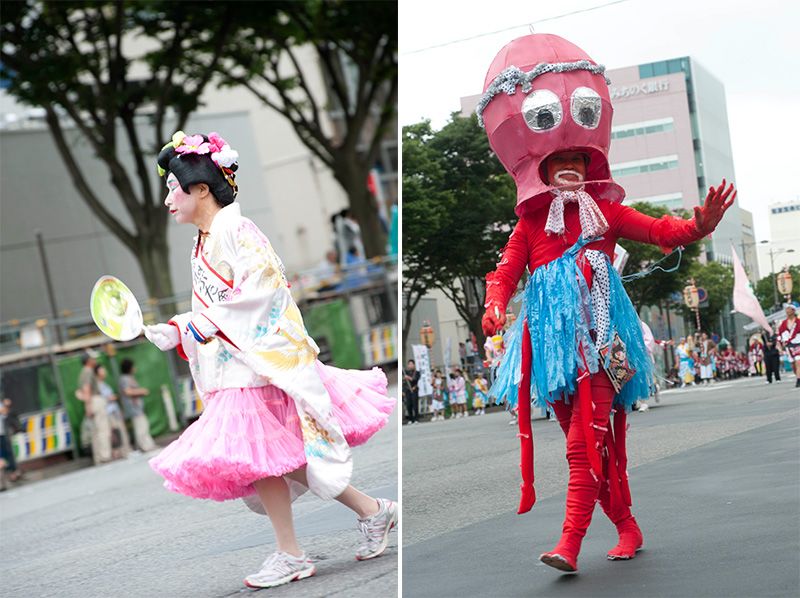