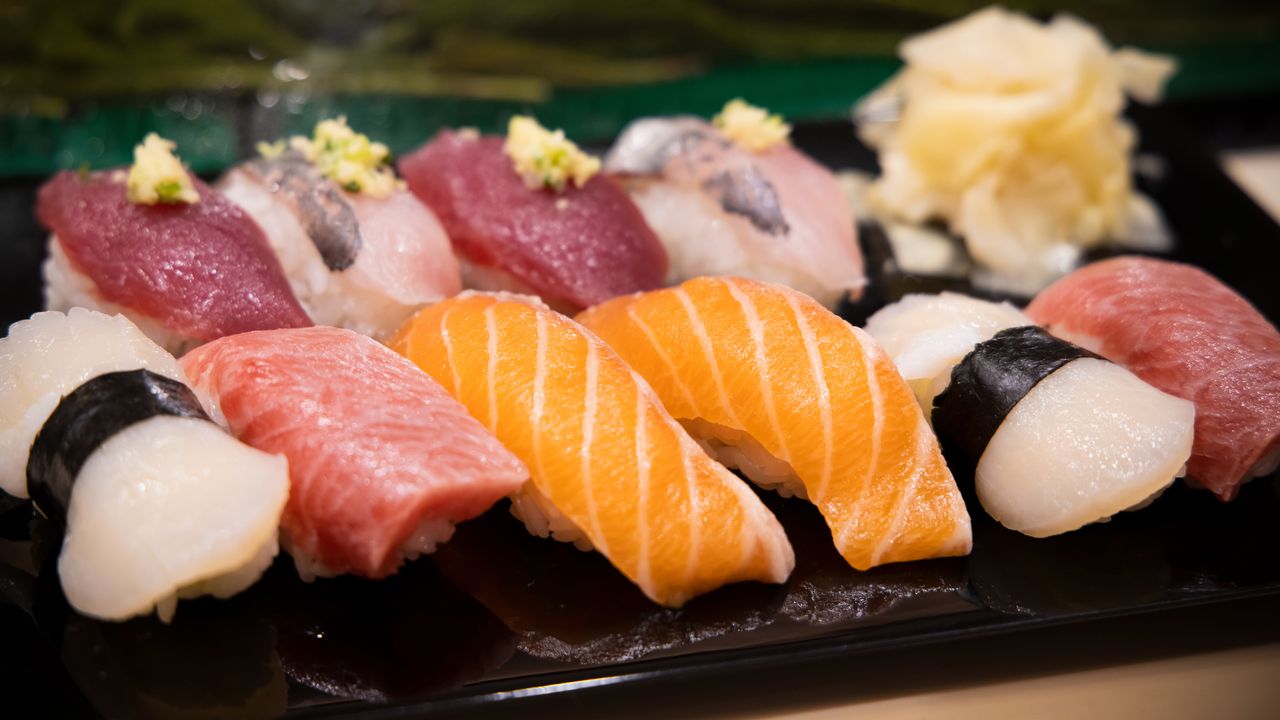 Food and Drink Travel Lifestyle Sep 11, 2020
Serving imported, farmed salmon as traditional Edomae sushi was practically heretical just a decade ago. Today, the fish is a customer favorite at leading sushi shops in Ginza and the Toyosu Market.

Salmon, once considered an inferior sushi topping, is now in high demand, its popularity as an ingredient outstripping even tuna. The discovery in mid-June this year of coronavirus on a cutting board used to slice imported salmon at a food market in Beijing sparked panic and prompted China to temporarily halt salmon distribution in the country. However, the fears behind this move are generally considered to overblown as fish is not widely believed to spread coronavirus.

The incident has caused some people to avoid salmon during the pandemic, but the popularity of the fish in Japan has not waned. In contrast to the shops at the former Tsukiji fish market, which prided themselves on offering the best of the domestic catch, sushi restaurants at the new Toyosu market in Kōtō, Tokyo, eagerly serve up salmon as a main menu item. It has likewise become a staple topping at high-end sushi shops in Ginza, with the popularity of salmon set to grow even more in the years to come. 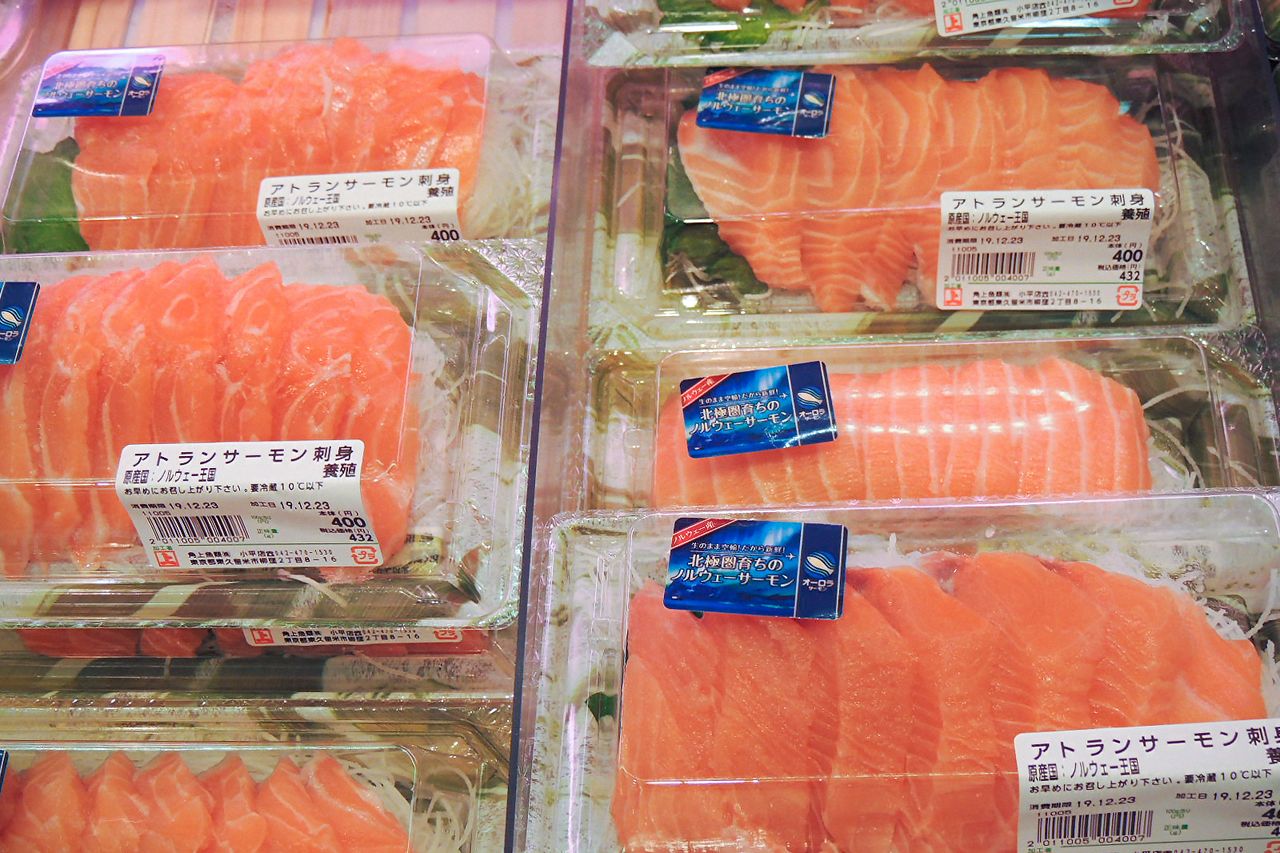 The chefs at the sushi shops at Toyosu Market serve carefully selected seafood from different areas around Japan, including tuna from Ōma in Aomori Prefecture, sea urchins from Hokkaidō, blackthroat seaperch from the Hokuriku region on the Sea of Japan coast, and prawns from Kyūshū. Prices are on the high side, averaging around ¥4,000 for a one-person plate of choice, domestically caught fish. The shops need to maintain this kind of high quality as many of their customers work at the market, including tuna auctioneers, wholesalers, and suppliers from outlying regions.

A decade ago, market wholesalers would not have considered including salmon in their selection of high-grade fish. Ocean Trading Company, an importer headquartered in Kyoto’s Nakagyō Ward, says that it was rebuffed by most of the wholesalers at the old Tsukiji market when they tried to find buyers of their imported salmon. The deeply ingrained assumption was that imported and farmed fish would not sell at Tsukiji.

Now, however, the lion’s share of fish wholesalers at Toyosu handle salmon. A representative of Ocean Trading Company says the firm can barely keep up with the yearend orders. According to one market professional, the shift is due to declining tuna catches and other fisheries resources worldwide and improving aquaculture, feed, and preservation technologies that have led to an increase in the quality of salmon entering Japan.

Chefs at top-grade sushi restaurants inside the Toyosu wholesale market note that salmon has become an essential menu item. Shops that did not offer salmon in their Tsukiji days have added it to their lineup while those that were already serving salmon have been stepping up their promotion of the fish. A sushi chef at Iwasa-zushi says that at Tsukiji, the shop never considered offering salmon sushi and would simply turn down customers who asked for it. Since then, however, the quality of the salmon has improved and with more customers asking for the fish, Iwasa-zushi has broken with tradition and added salmon sushi and a salmon sushi bowl to its menu.

Salmon is a popular menu item at non-sushi eateries as well. Tonkatsu Yachiyo, which specializes in deep-fried pork cutlets, offers not only a fried salmon plate, but since moving to the Toyosu market from Tsukiji has added a dish of raw salmon slices to its list of options. Imported, farmed salmon is fast encroaching on the traditional realm of domestic, wild-caught seafood. 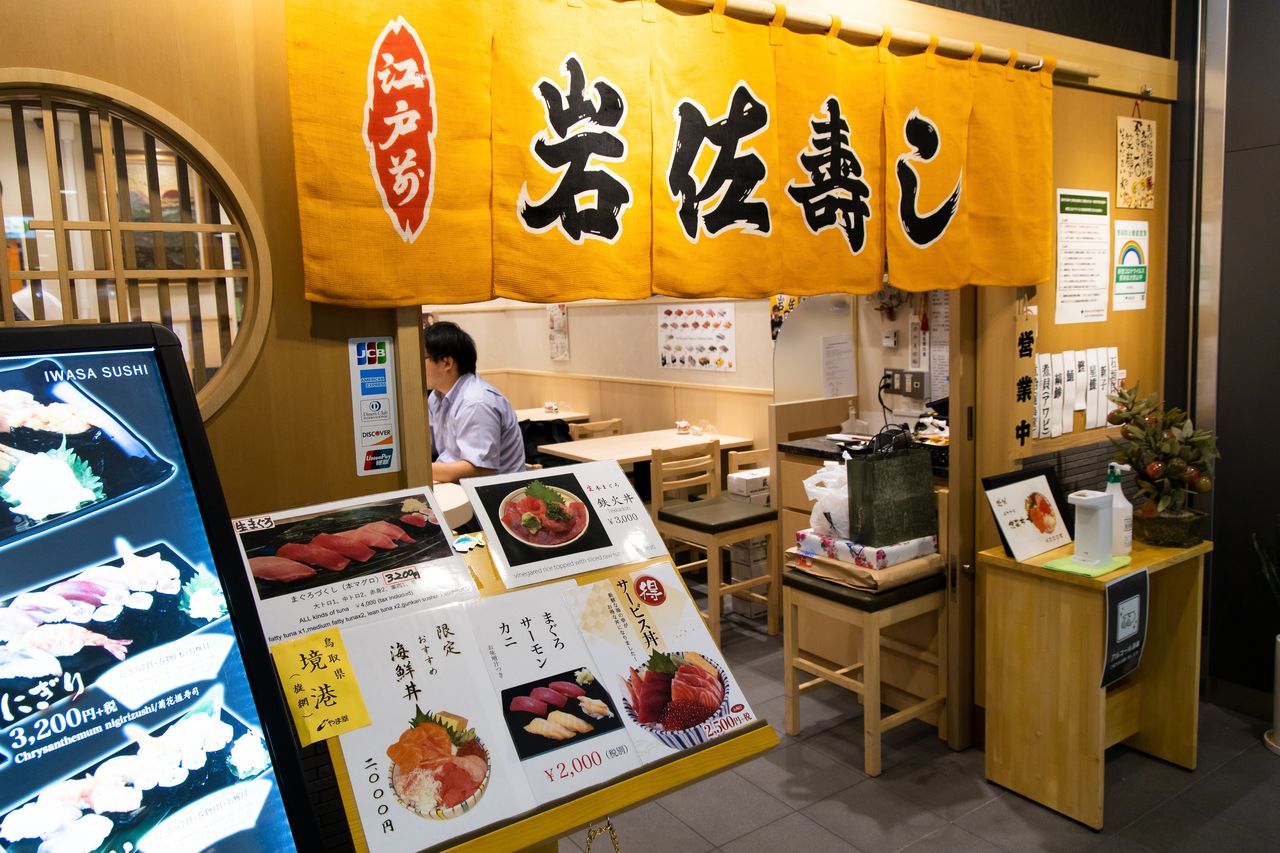 Iwasa-zushi prominently displays its menu of salmon dishes at the shop’s entrance. (Photo by the author) 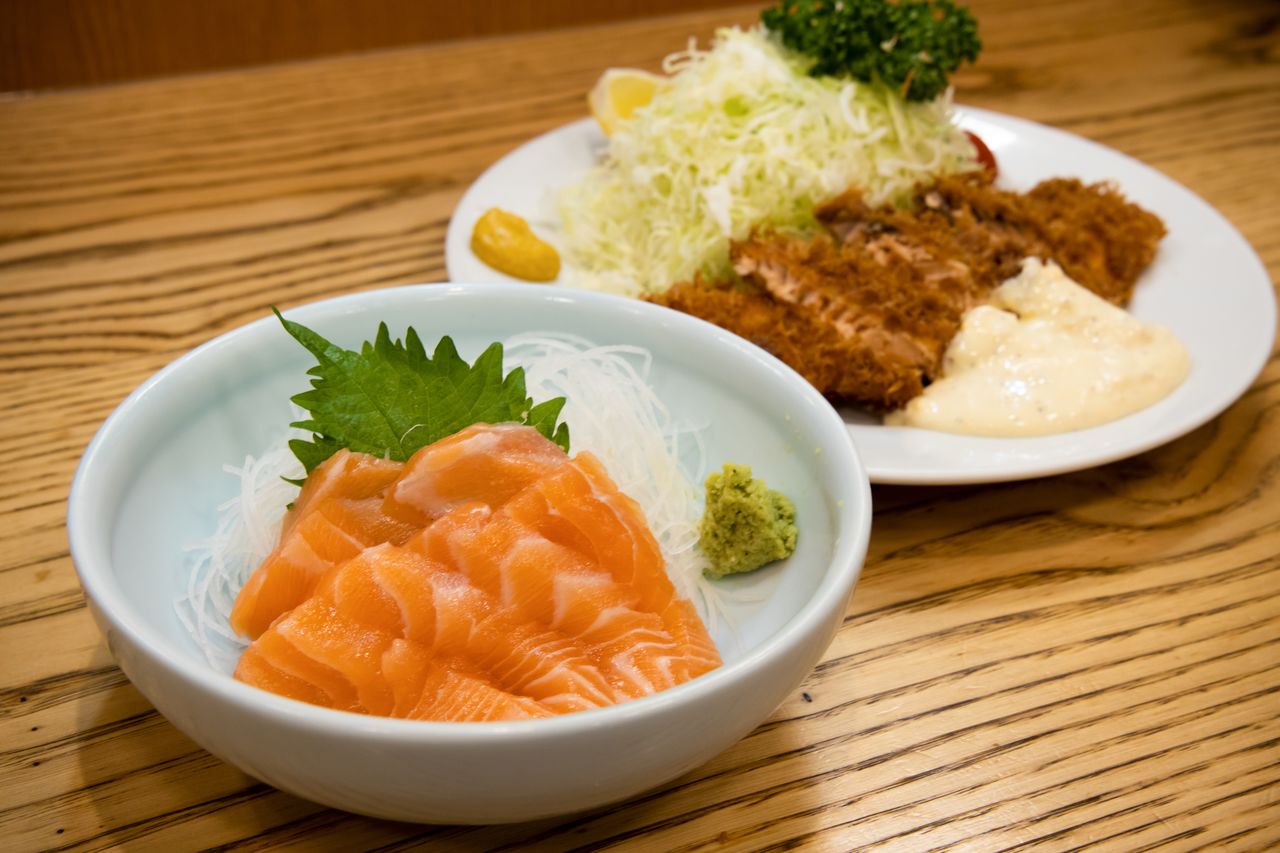 Salmon flakes for rice balls and grilled salmon are staples of Japanese home cooking. However, Japanese restaurants and fish vendors have typically made a clear distinction between this kind of cooked fare and imported salmon that can be eaten raw.

The most prevalent domestic variety is chum salmon. There is also farmed coho salmon, a popular lunch box food, from Miyagi Prefecture. Wild salmon, such as sockeye and king salmon imported from Russia and North America, are also available. Not so long ago, though, Japanese shunned eating uncooked salmon as it was thought to contain parasites. The introduction of farmed Norwegian salmon has changed this perception, bolstering the popularity of the fish as a sushi topping. 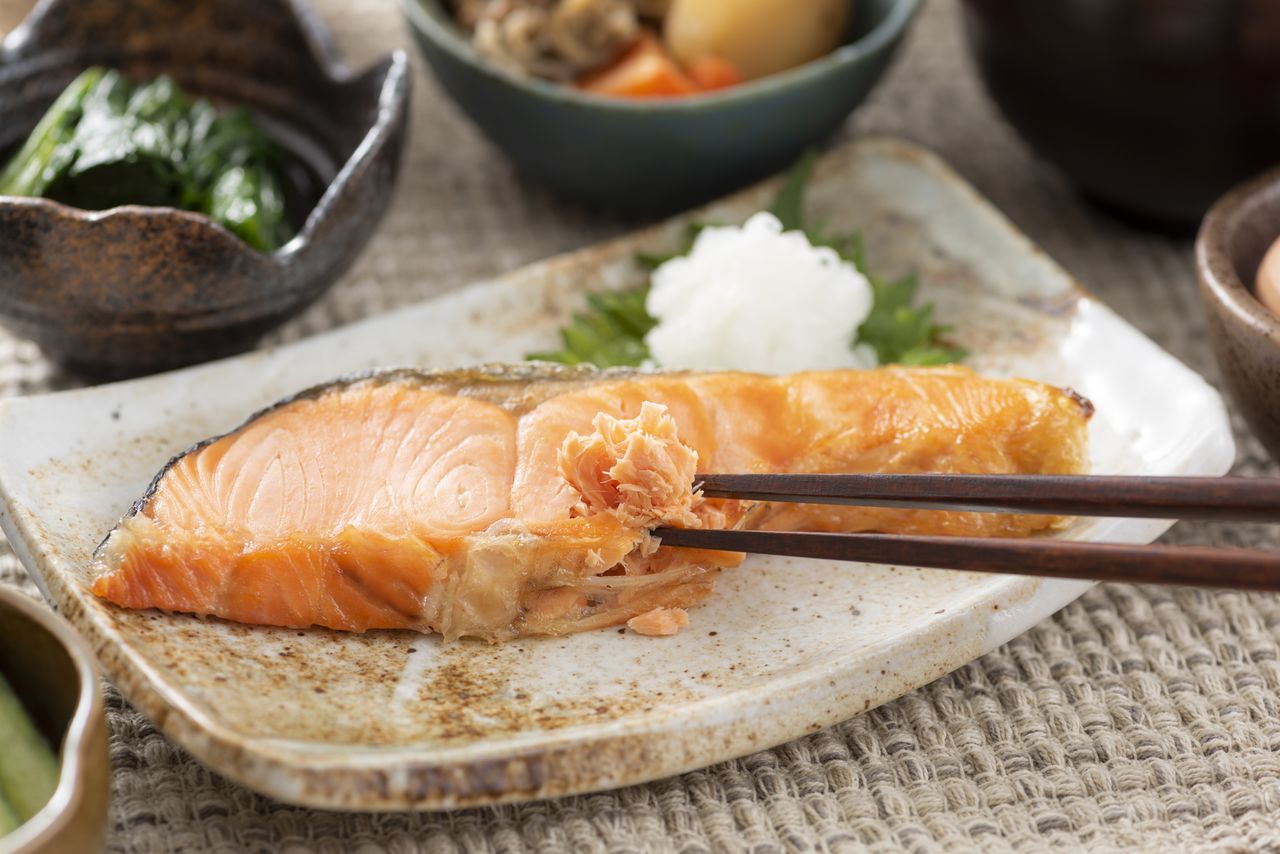 Inexpensive fatty salmon has also become a staple at reasonably priced kaiten-zushi (conveyor-belt sushi) restaurants catering to families. Once a favorite of women and children, today salmon is the top choice of customers across the board. In the annual kaiten-zushi consumer survey conducted by Maruha Nichiro, one of Japan’s largest fishing and food companies, salmon has ranked as the most favored sushi topping for the past nine years. Data published in March 2020 shows salmon as the most often eaten sushi topping of 53.2% of women and 41.3% of men, far ahead of lean tuna in second place.

The popularity of salmon in Western countries as well as in China has helped to propel this trend. With the uptick in foreign tourists to Japan, many of whom are unaccustomed to eating raw fish, even upscale sushi restaurants were compelled to add salmon to their menus. Now at sushi shops at Toyosu Market, a la carte orders for salmon toppings by Japanese customer are fast outpacing those for long-time favorites like tuna and sea urchin. 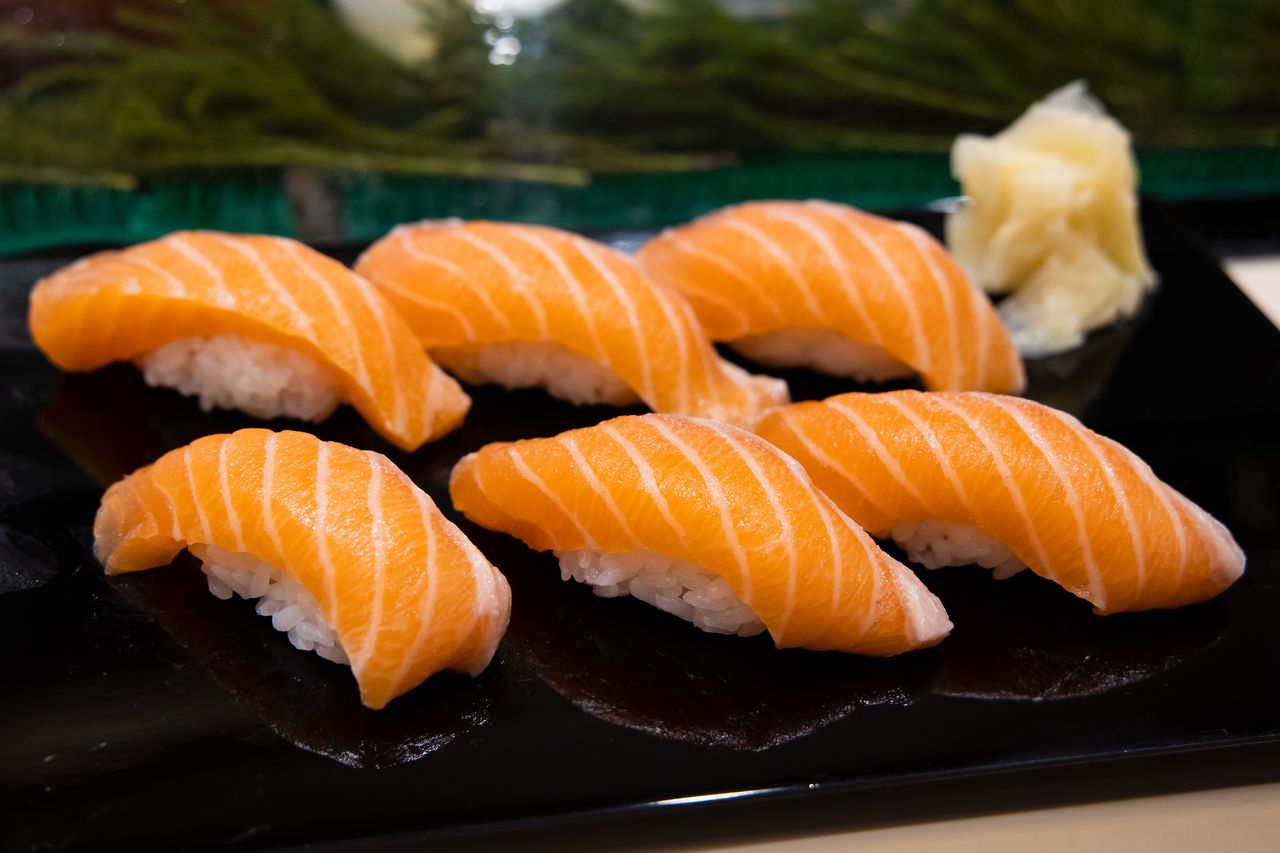 Salmon sushi has become one of Iwasa-zushi’s most popular offerings. (Photo by Nippon.com)

While Chile and Canada account for a substantial portion of farmed salmon consumed in Japan, by far the most coveted imported variety is Norwegian Atlantic salmon. The fish are farmed along the coast of Norway where cold Arctic currents blend with the warm waters of natural bays in aquaculture facilities that oversee each step in the cycle from the harvesting and hatching of eggs to feeding and shipment. According to the Norwegian Seafood Council, the fast-flowing Artic currents keeps Norway’s coastal waters cool, creating a perfect environment for fostering salmon growth.

The top brands of Norwegian salmon are cultivated in tightly-managed farms located in Arctic waters. Known as Aurora Salmon, these fish are processed and air-freighted to Japan within 36 hours of harvesting. Sold in Japanese wholesale markets for raw consumption, such as sashimi, they share top ranking with other types of luxury fish. 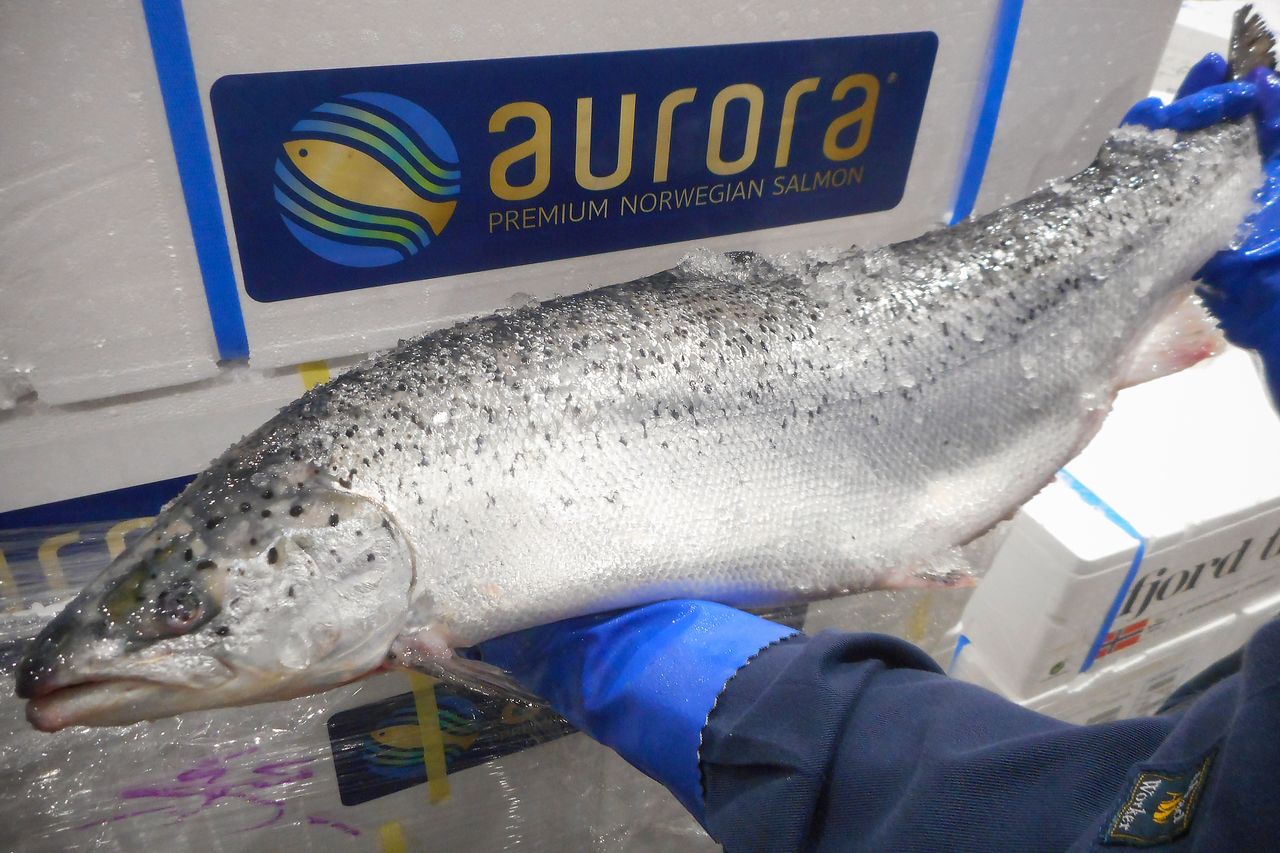 Norwegian Aurora salmon on sale at the Toyosu fish market in Tokyo. (Photo by the author)

According to a NSC survey, salmon exports to Japan totaled around 34,000 tons in 2019, roughly 40% more than a decade ago. The popularity of the imported fish has spread from the Tokyo metropolitan area to restaurants and fish shops throughout the country.

Japanese, however, are not the only people who have taken a shine to Norwegian salmon. Consumption has soared in European countries as well as in China. In most cases, the salmon is processed to remove the head, bones, and skin and then sold as packaged slices. However, efforts are underway to cut back on waste by making use of portions of the fish that are generally discarded. Ocean Trading Company came out this spring with deep-fried chips made from the skin of imported salmon. This novel product has attracted attention recently as a pioneering endeavor to help meet the sustainable development goals set by the United Nation. 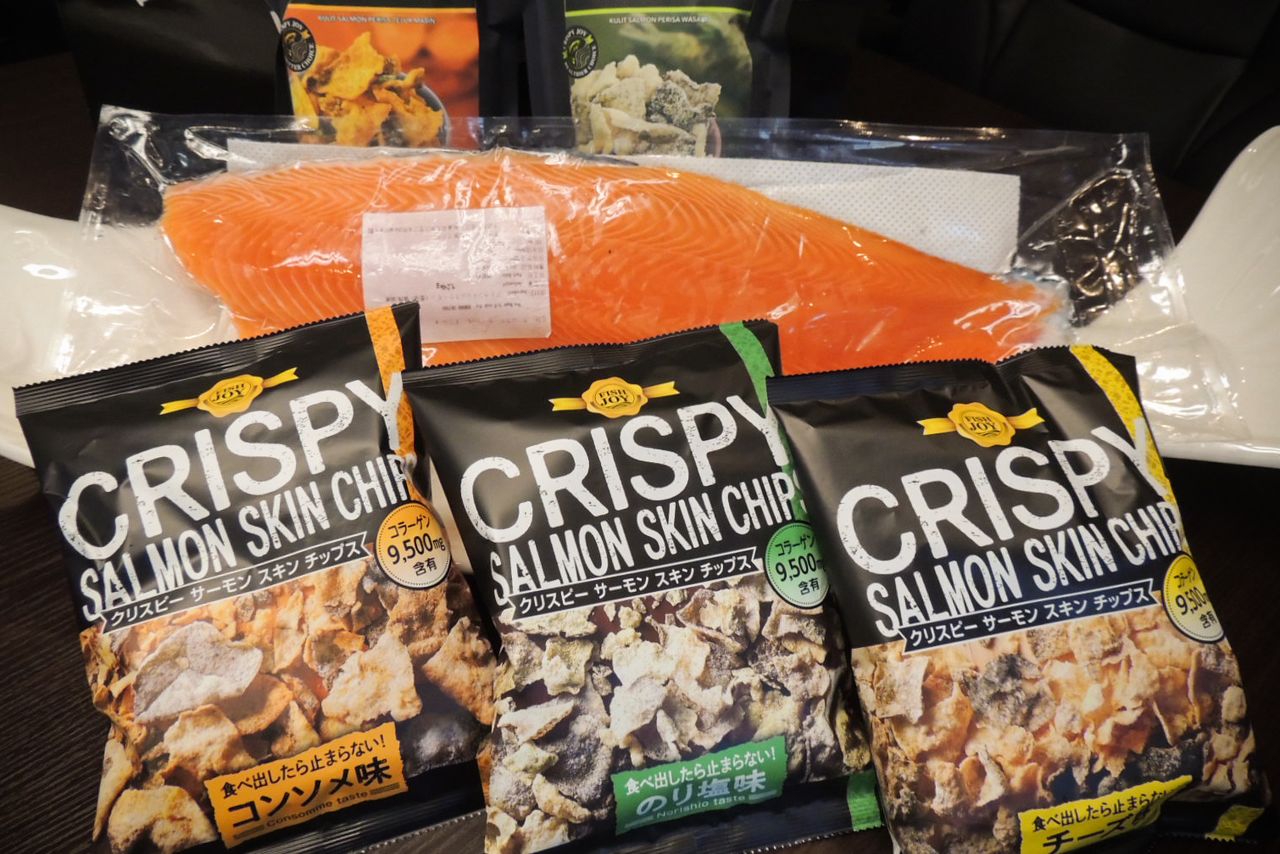 Ocean Trading Company launched its line of salmon-skin chips in June 2020. (Photo by the author)

Tsukiji Suzutomi, a group of luxury sushi restaurants on the top floor of  Tokyo’s Ginza Six shopping complex operated by a Toyosu tuna wholesaler, offers Norwegian farmed salmon among its menu items. “We just can’t ignore all the orders we are getting for salmon,” says company president Yamagata Tadashi.

Yamagata is the fourth-generation owner of Miyako-zushi, a sushi restaurant in Tokyo’s Nihonbashi district that has been in operation since 1887. He is also the chair of the Japan Sushi Environmental Health Federation. Yamagata says that Edomae sushi has long emphasized domestic and wild-caught products, but now with so many people around the world eating sushi, a more sustainable approach is needed. “If we insist on only wild fish, we are going to completely deplete our fishery resources,” he warns. With Norwegian salmon, though, shops are assured a stable, sustainable supply. He says that even though it is farmed, the fish is firm and just fatty enough to be a tasteful sushi topping. “I expect salmon to become a staple of Edomae sushi.”

Norway currently grows its salmon at farms located near river mouths along the country’s western coast. The NSC says the new technology in development will soon make it possible to place farms several kilometer further out into the ocean, which would provide a more natural environment and allow for the cultivation of even higher quality salmon. This is good news for Japan, where the popularity of salmon continues to rise and more people are enjoying it, whether raw as sashimi or sautéed and grilled. 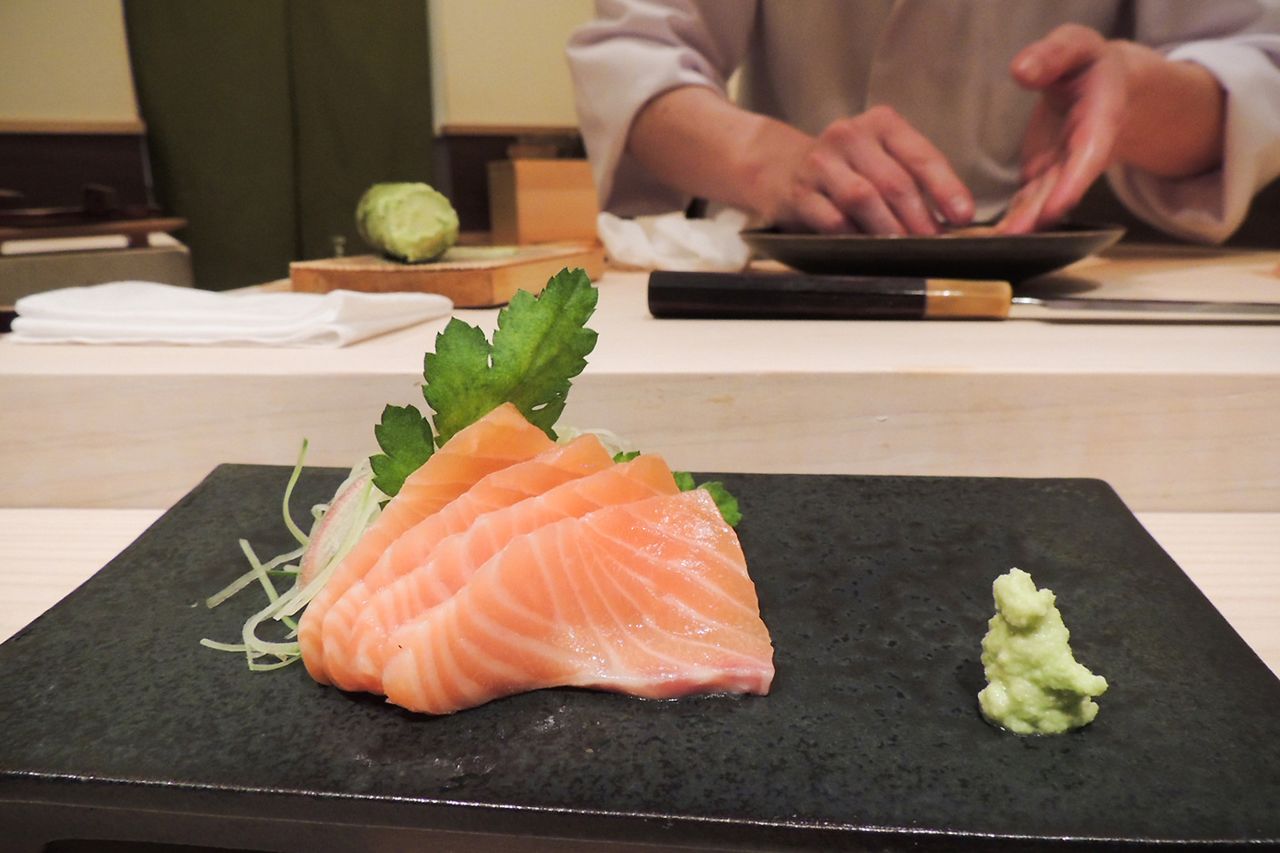 The high-end Tsukiji Suzutomi in Ginza has had salmon on its sashimi and sushi menu since last autumn. (Photo by the author)

(Originally published in Japanese. Banner photo: Salmon is a favorite sushi topping along with tuna. At Iwasa-zushi in the Toyosu Market. Photo by Nippon.com.)