Society Culture Jan 23, 2016
Kaiten-zushi (conveyor-belt sushi) restaurants are a cheap and casual way to enjoy Japan’s most famous food, as customers simply pick up dishes as they pass by on the belt or make orders from touchscreens.

Sushi is undoubtedly the best-known Japanese food around the world. It first grew in popularity during the Edo period (1603–1868) as street food bought from yatai stalls. Following World War II, the sale of raw items at these kinds of stall was prohibited, making sushi a luxury food only available in specialized restaurants. With the emergence of kaiten-zushi (conveyor-belt sushi) restaurants, however, the dish became affordable once more.

Kaiten-zushi customers sit around a revolving conveyor belt carrying plates of sushi, choosing items they want to eat as they glide past or ordering directly—either by speaking to a chef or, in the modern era, from a touchscreen. With differently colored plates representing various prices, it is easy to keep track of the cost of the meal, and the self-service system can be cheaper and less intimidating than ordering each item directly. 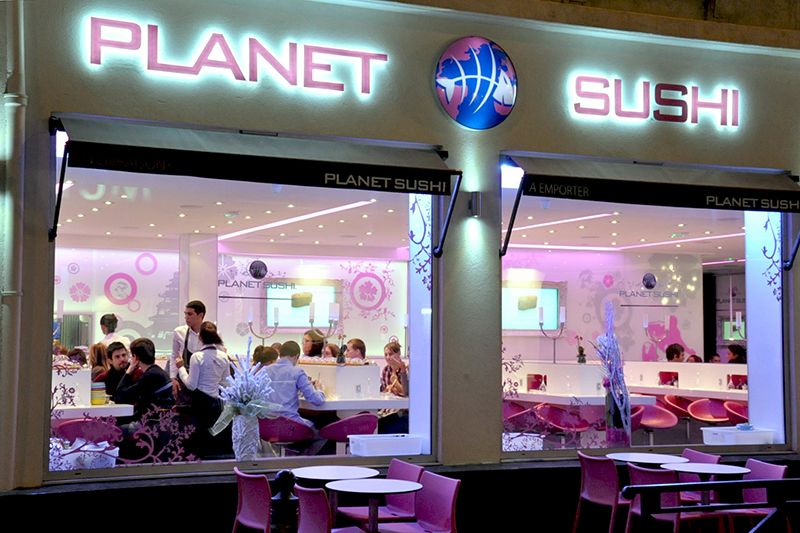 The first kaiten-zushi restaurant, Mawaru Genroku Sushi, opened in Japan in 1958. Shiraishi Yoshiaki, the owner of a standing sushi restaurant in Osaka, installed a conveyor belt to make his employees’ work easier and reduce costs. Since then, the number of restaurants has proliferated. Domestic chains like Sushirō and Kura-Zushi have numerous outlets across the country, while foreign firms like Yo! Sushi! and Planet Sushi have also found success outside of Japan.

While Japan’s sushi sales continue to grow, restaurants have to offer more than just low prices to stay competitive. 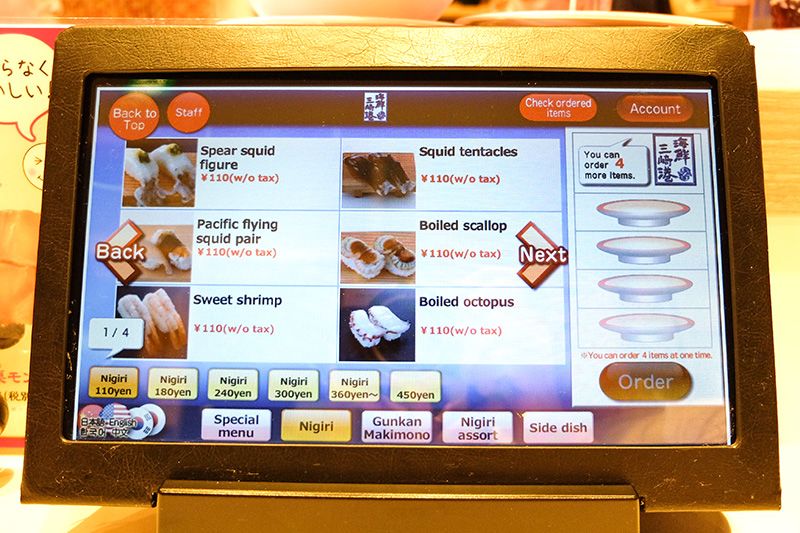 Ordering in English by touchscreen.

An increasing number of establishments provide tablet-based touchscreens, allowing customers to order in Japanese or foreign languages including English, Chinese, and Korean. At some restaurants, there is a “fast lane” belt for delivering orders, which may have a specially designed tray to carry the plates to customers' seats. At Uobei in Shibuya, Tokyo, in a variation on the kaiten-zushi theme, the conveyor belt only moves to speedily transport customer orders. 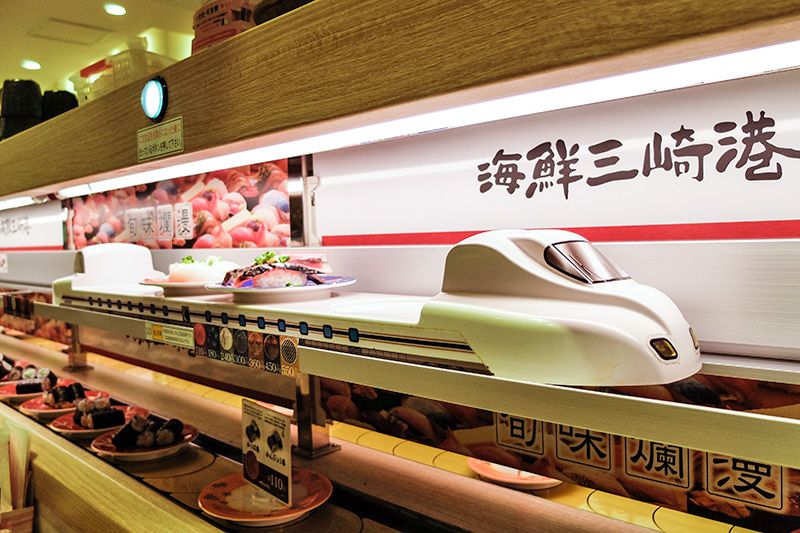 Sushi being delivered on a shinkansen tray. 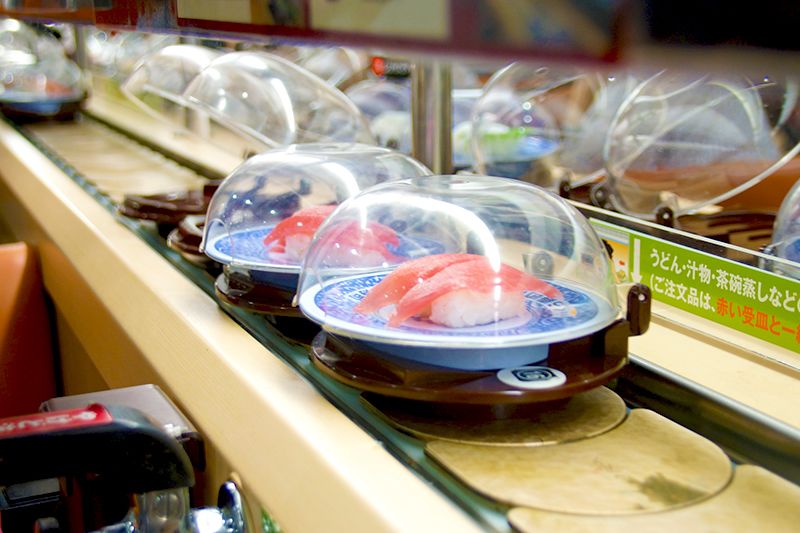 Major Japanese chain Kura-Zushi, which also has outlets in California operating under the name Kula, has a system for automatically returning used plates to the kitchen. By inserting five empty plates into the return chute installed at their table, diners can launch a game on the screen, giving them a chance to win a sushi-themed toy. The restaurants have more than just counter seating: Kura-Zushi and other outlets offer tables big enough for families, with the same access to the delivery conveyors. At many restaurants, including Sushirō, the plates carry electronic chips to track the time when they were placed on the belt, letting the machinery automatically dispose of the sushi pieces on board after a set amount of time to maintain freshness. 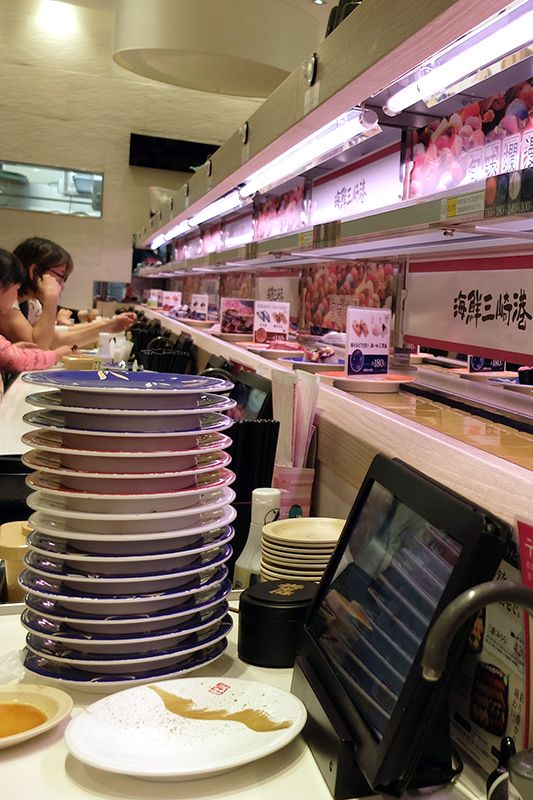 Count the different colored plates to find how much you owe.

Some kaiten-zushi restaurants offer each dish for ¥100 (plus tax). In general, though, prices vary by item, with the high end being around ¥500. Different plate colors indicate the prices, making it easy for customers to quickly calculate their bill. Plates embedded with IC chips make it even easier for the wait staff, who can calculate the bill instantly with the swipe of an electronic reader.

In general, sushi at these restaurants comes with wasabi already included. Those who do not like the eye-watering condiment can ask the chef to make their dish sabi-nuki (without wasabi), though. Some chains, though, including Kura-Zushi, make all their sushi wasabi-free, asking diners to add it according to their preference.

All restaurants provide cups and hot water, along with powdered green tea or teabags. Push the cup against the button on the tap installed in the counter or table to fill it with hot water. While customers in other countries may have to pay for green tea at sushi restaurants, in Japan it is free of charge. The gari (pickled ginger) used for cleansing the palate is also freely available.

Some kaiten-zushi restaurants do not limit themselves to sushi. Depending on where you go, you may see ramen, fried chicken, fried potatoes, sweets, and even cups of gourmet coffee cruising around the conveyor belt. And regional restaurants will often offer local specialties. The kaiten-zushi experience is one of the least expensive ways to get your fill of Japan's traditional seafood cuisine, but it is an essential part of life in the country today and something not to miss.