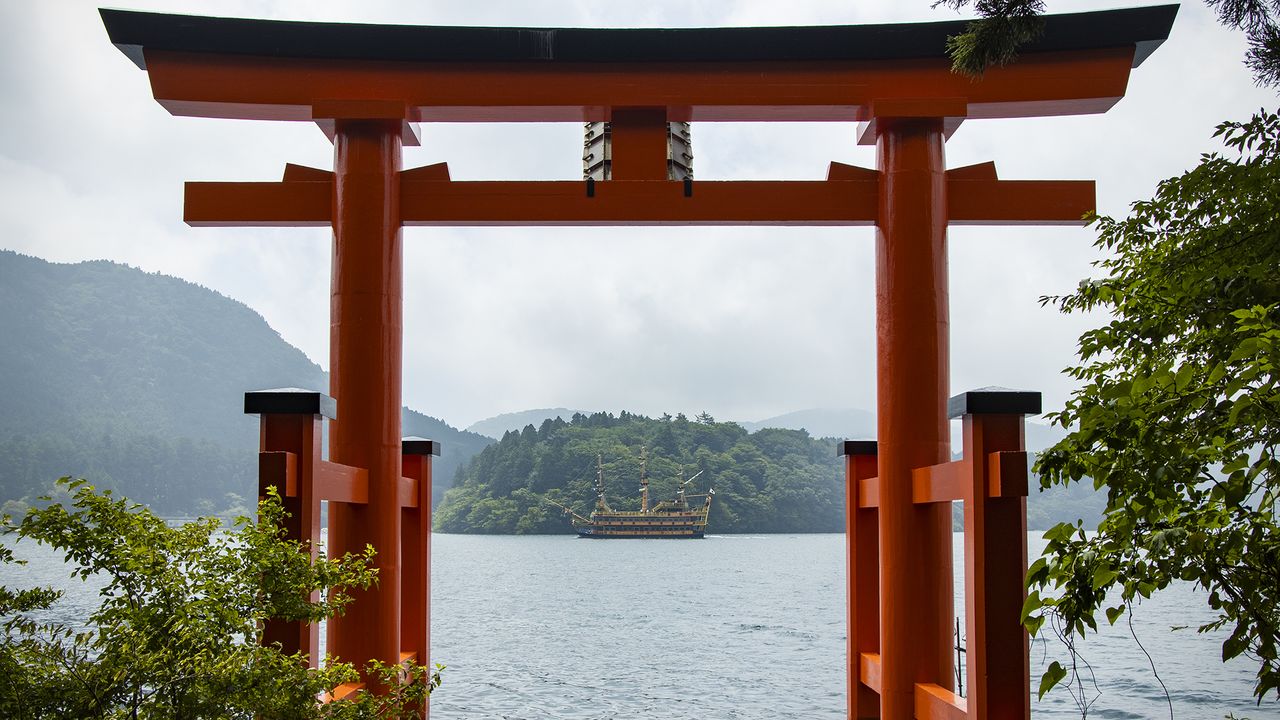 On a clear day at Hakone’s Lake Ashi, the largest lake in Kanagawa Prefecture, you can see Mount Fuji. The surrounding mountains, including Komagatake and Kamiyama, provide similarly breath-taking views of the iconic peak. Visitors will also be met by the more curious sight of garish “pirate ships” gliding across the lake’s surface, miles from the nearest ocean. Now a well-established symbol of the lake, these vessels offer children the fantasy of sailing on the high seas and adults stylish, comfortable interiors in which to savor Hakone’s natural scenery. 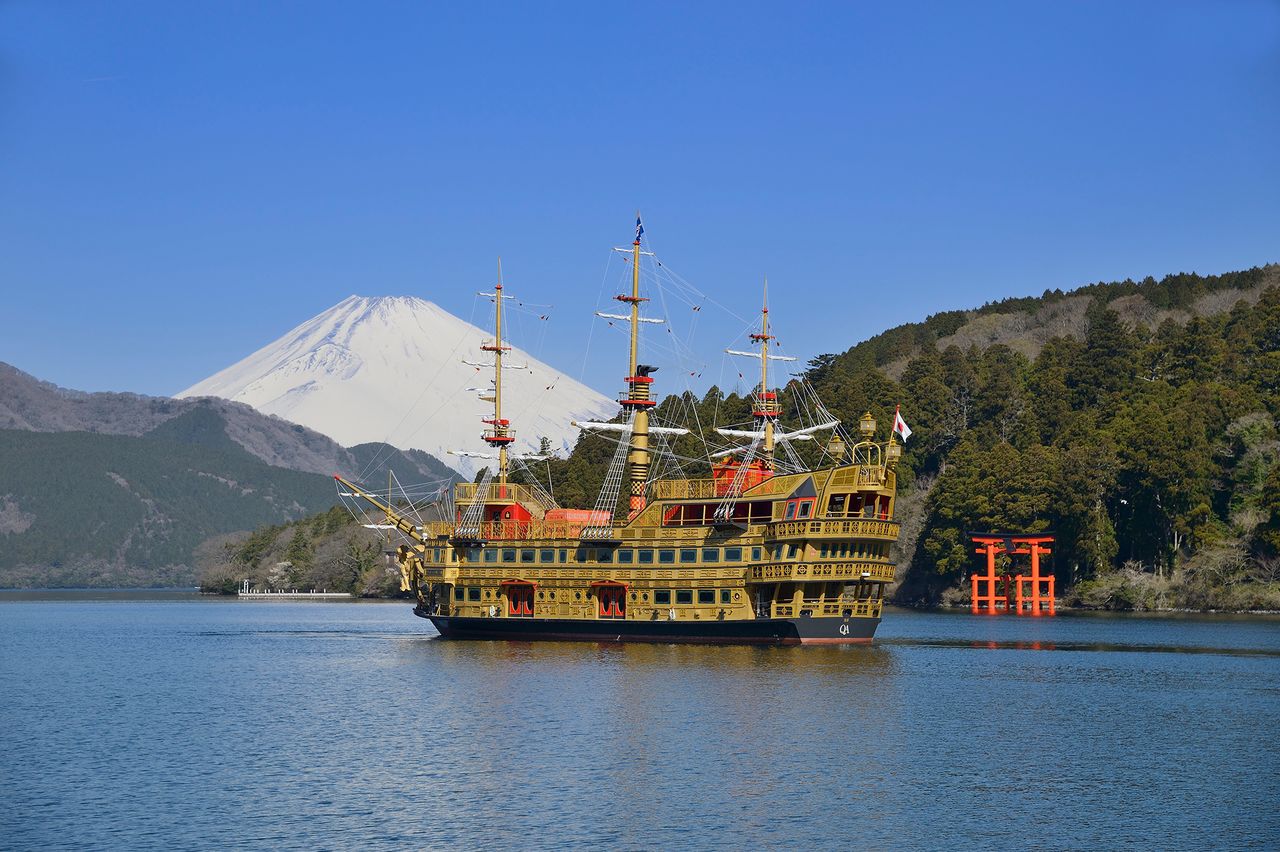 The Queen Ashinoko, the latest addition to the pirate ship fleet, with Mount Fuji in the background. (Photo courtesy of Odakyū Agency)

Historically, Lake Ashi’s location on the ancient Tōkaidō highway stretching from Edo (now Tokyo) to Kyoto made it an important commercial center. Reminders along the shore of the days when the area was a bustling post town include Hakone Shrine, a Shintō sanctuary dating back to the Nara period (710–94) that was worshipped by notable military commanders like Minamoto no Yoritomo (1147–99), and the Hakone sekisho, a critical checkpoint where authorities strictly controlled the movement of travelers to and from the feudal capital.

Since the Meiji era (1868–1912), Hakone has been a popular destination for people wanting to escape the heat of Tokyo or take a dip in the thermal springs. The area boasts a multitude of tourist attractions, restaurants, and souvenir shops.

The Hakone “pirate ships” ferry passengers between three lakeside piers, with the Hakone-machi dock being the closest to the old highway and checkpoint. Just a stone’s throw away the finish line of the outbound leg of the Hakone Ekiden, a long-distance relay race held every New Year (the event has become a national sporting tradition with its own dedicated museum that tourists can visit). Morning cruises depart from the Hakone-machi dock for the Motohakone docks, where it is just a short walking to Hakone Shrine and Onshi-Hakone Park. Both piers are located at the southern tip of the long, narrow Lake Ashi and the trip takes only 10 minutes. 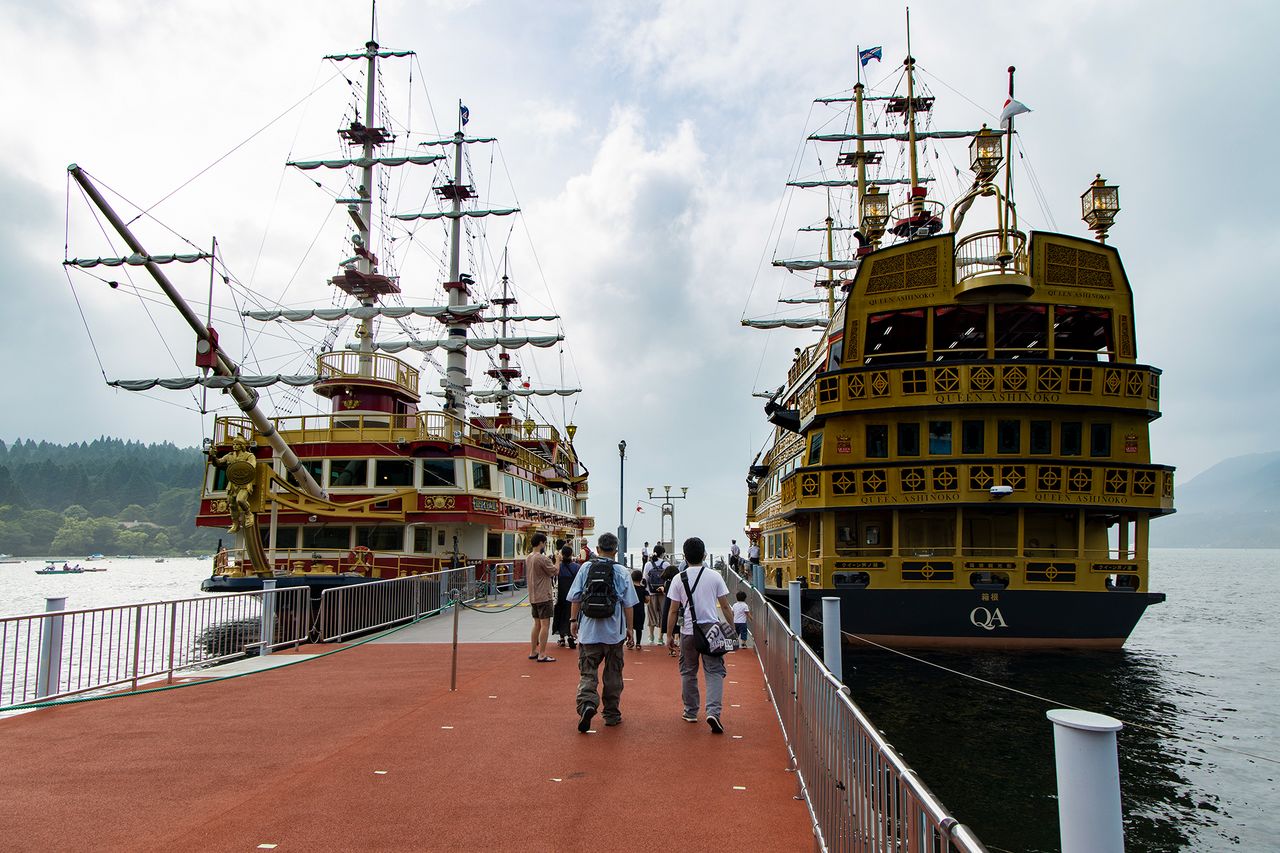 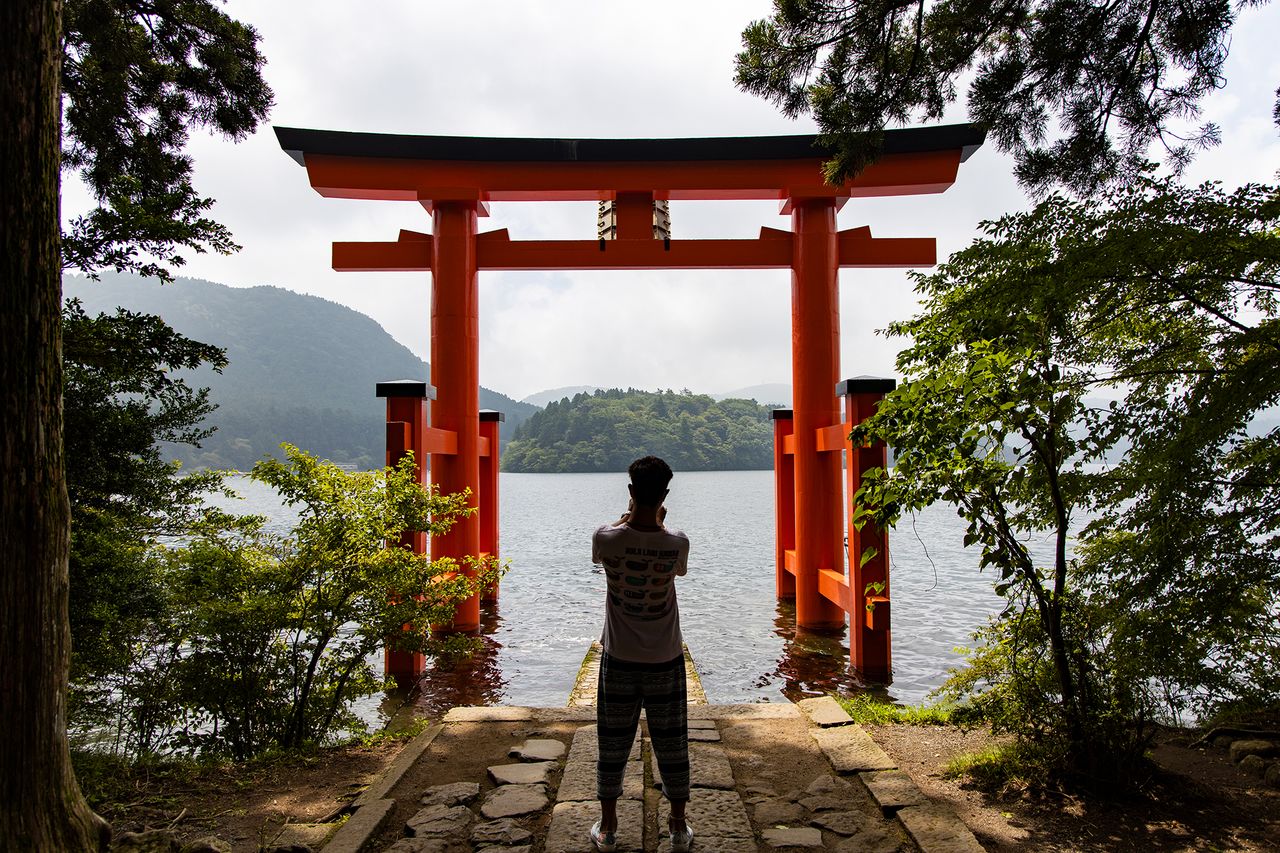 The partially submerged Gate of Peace at Hakone Shrine is a popular photo spot.

The trip from the Motohakone dock at the south end of the lake to the Tōgendai dock on the northern shore takes around 25 minutes. From there, it is a 16-minute ride from the adjacent Tōgendai gondola station to the famous Ōwakudani geothermal valley and its billowing plumes of smoke. Riding the ropeway to the last stop, Sōunzan, provides visitors some of the best views Hakone has to offer. From there, the cable car takes passenger to Gōra Station, where they can change to the Hakone Tozan Railway. 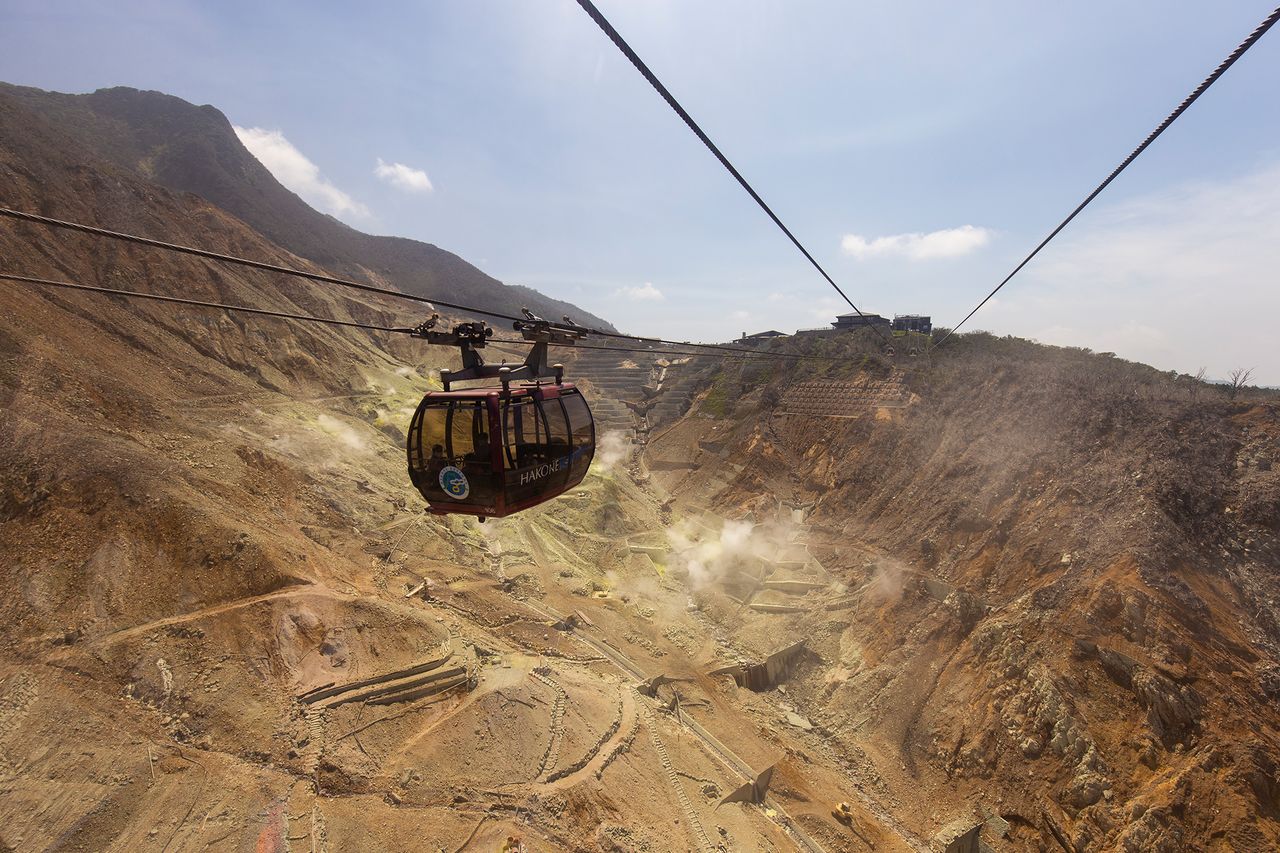 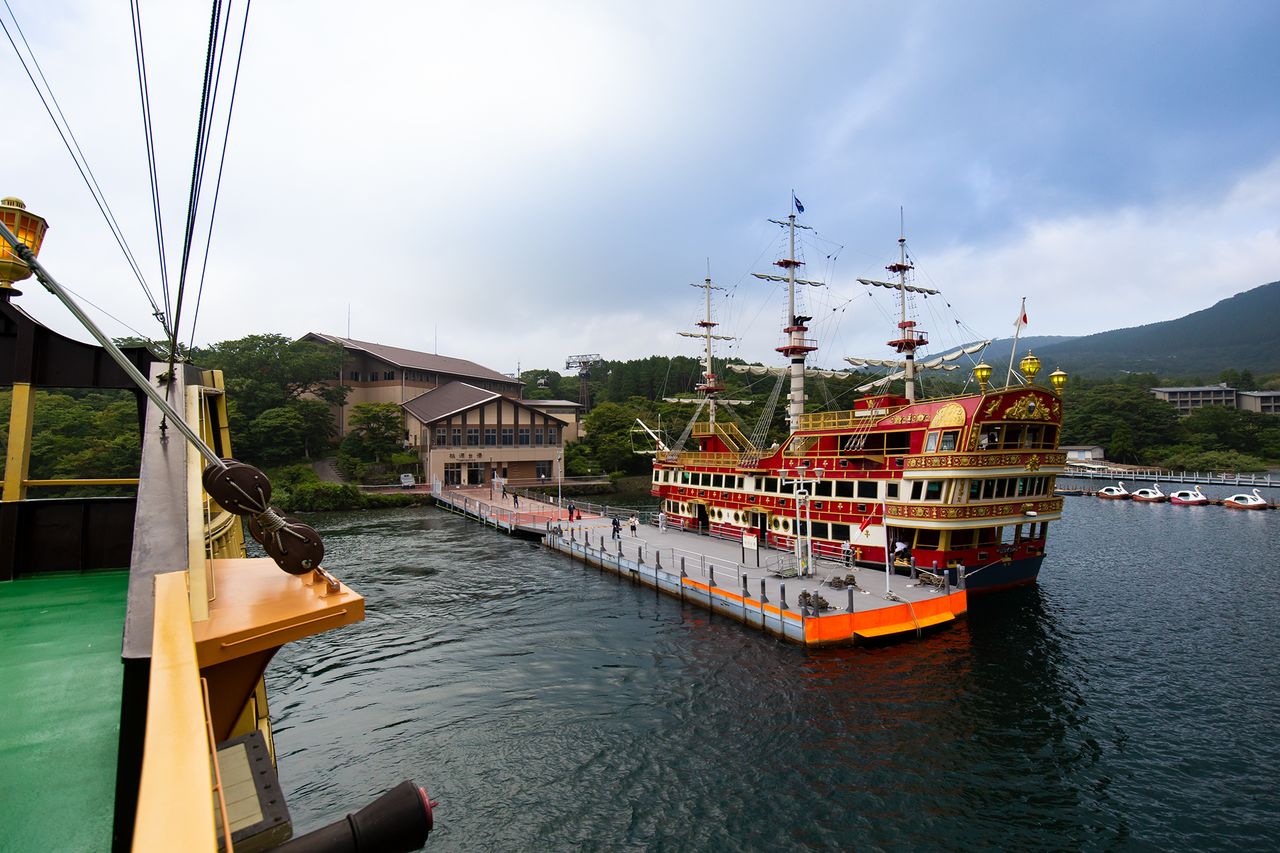 The Tōgendai dock and the Royal II seen from the deck of the Victory.

The trip from Tōgendai back to Hakone-machi takes around 25 minutes. The standard route travels counterclockwise around the lake from Hakone-machi to Motohakone before returning to Tōgendai, a total of 70 minutes including stops. Holders of roundtrip tickets are able to reboard from any stop making it possible to explore the tourist attractions along the way and enjoy the amenities of different ships. There is plenty of free parking at the docks, making visiting by car a convenient option. 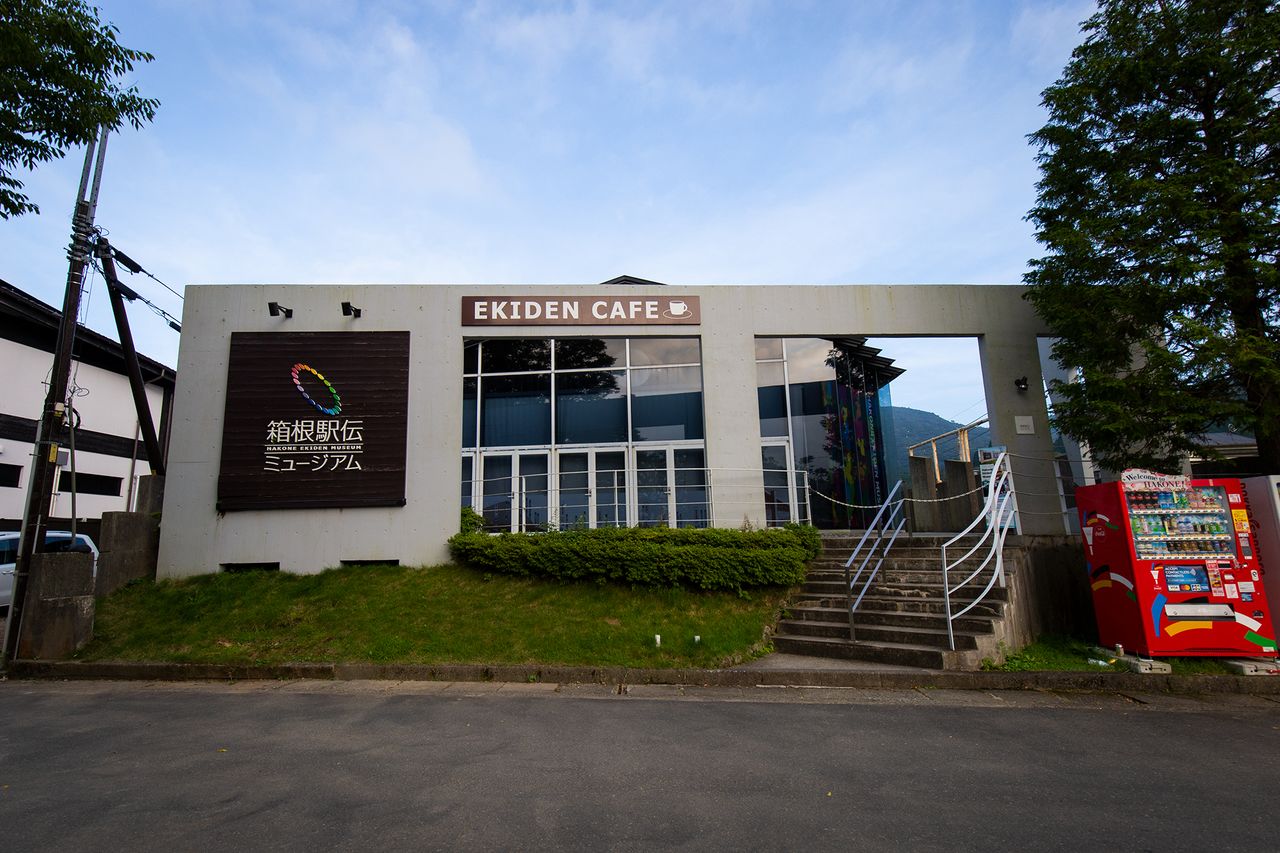 Attractions for the Whole Family

A total of three pirate ships currently traverse the lake. The oldest, the Victory, went into service in 2007 and is modelled on the famed British Royal Navy vessel HMS Victory. To add to the fantasy, the ship has been fitted out with cannons, treasure chests, and other curiosities.

The Royal II, which entered service in 2013, is modelled on the Royal Louis, which was part of the Royal French Navy in the eighteenth century. The ship features pirate figurines on the deck and optical illusions in the hallways where passengers can snap photos. 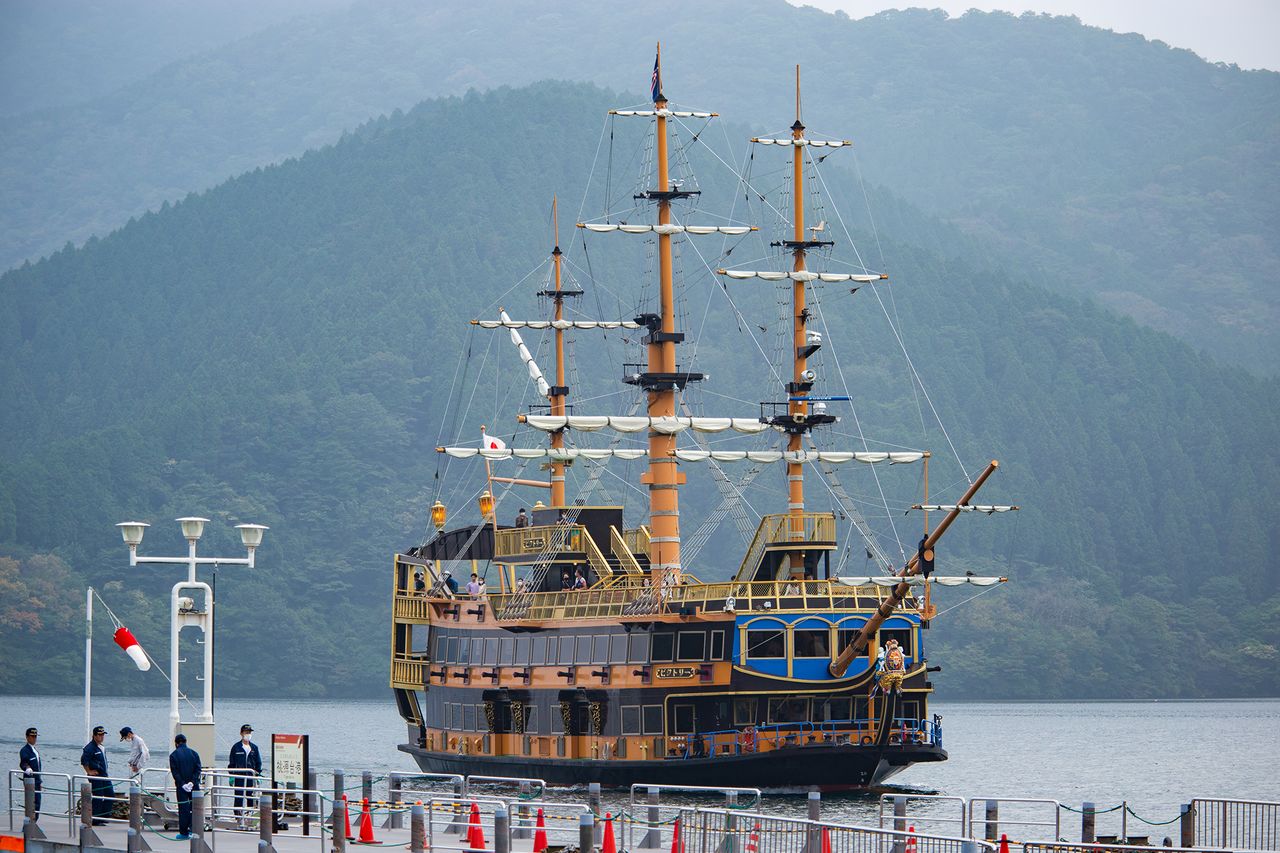 The Victory is recognizable by its predominately black color scheme. 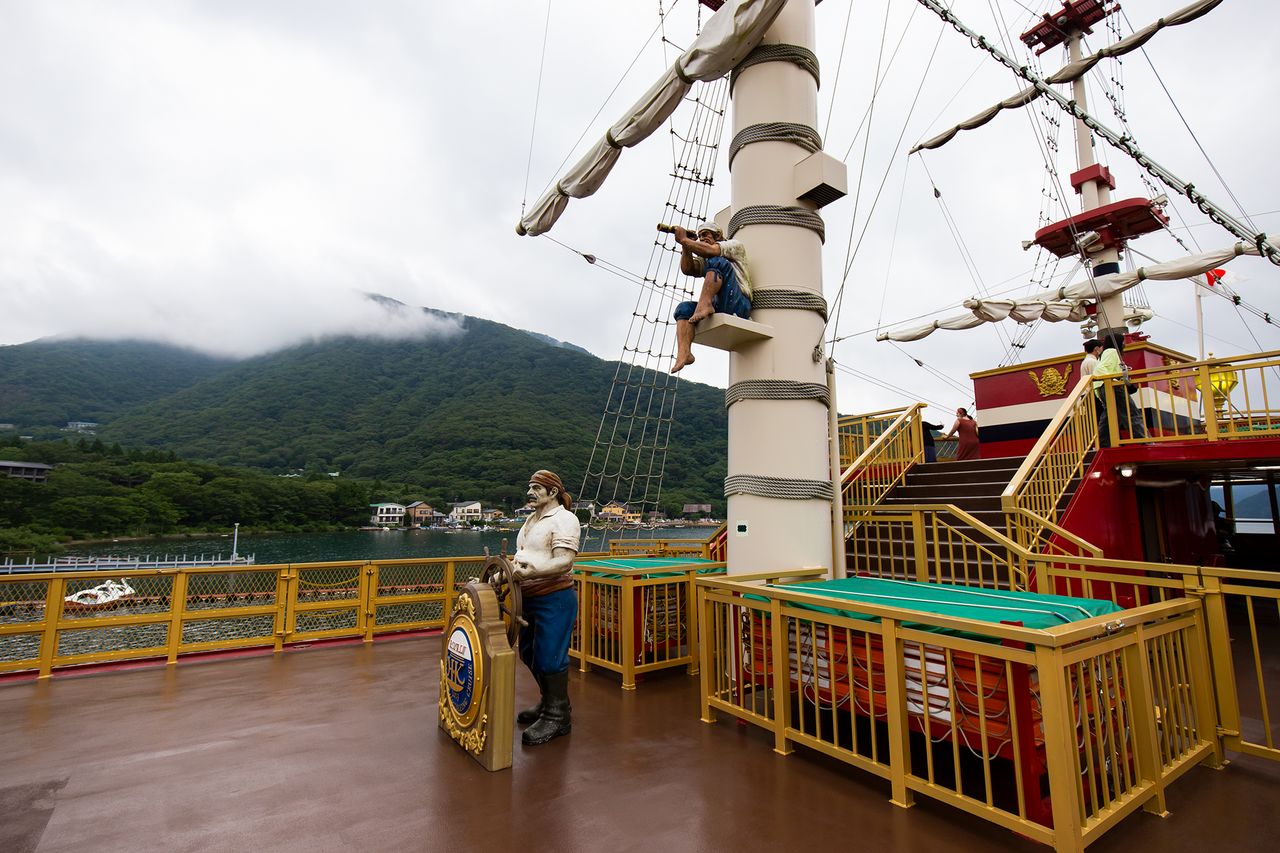 Statues of a helmsmen and guard add to the décor on the deck of the Royal II. 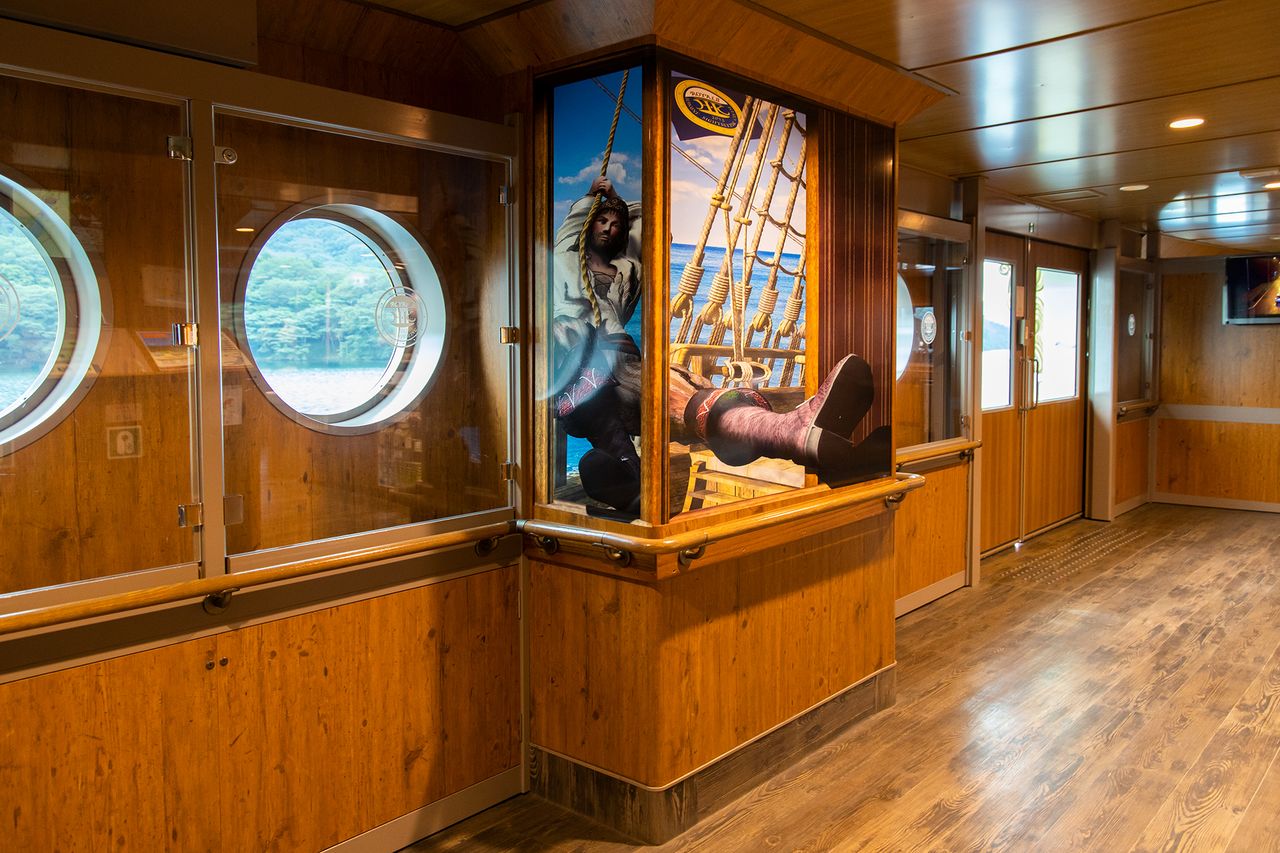 An optical illusion corner on the Royal II makes it appear as if pirates are on the attack.

The ship currently creating the biggest buzz is the latest addition to the fleet, the Queen Ashinoko, which entered service in the summer of 2019. The ship’s interior is the work of industrial designer Mitooka Eiji, who also applied his innovative style to the Kyūshū Shinkansen and the luxury cruise train Nanatsuboshi.

Sporting a figurehead of the Greek goddess Nike and a gold color scheme, the Queen Ashinoko is a sight to behold. On the deck, crimson shades and crown emblems have been used to great effect.

Shibayama Nanako, who oversees marketing for the Hakone Sightseeing Cruise line, explains that the Queen Ashinoko is designed on the concept of excitement. “We’ve built on the existing pirate ship theme, which was already a favorite with children, by adding a level of sophistication that will appeal to adult passengers as well.” 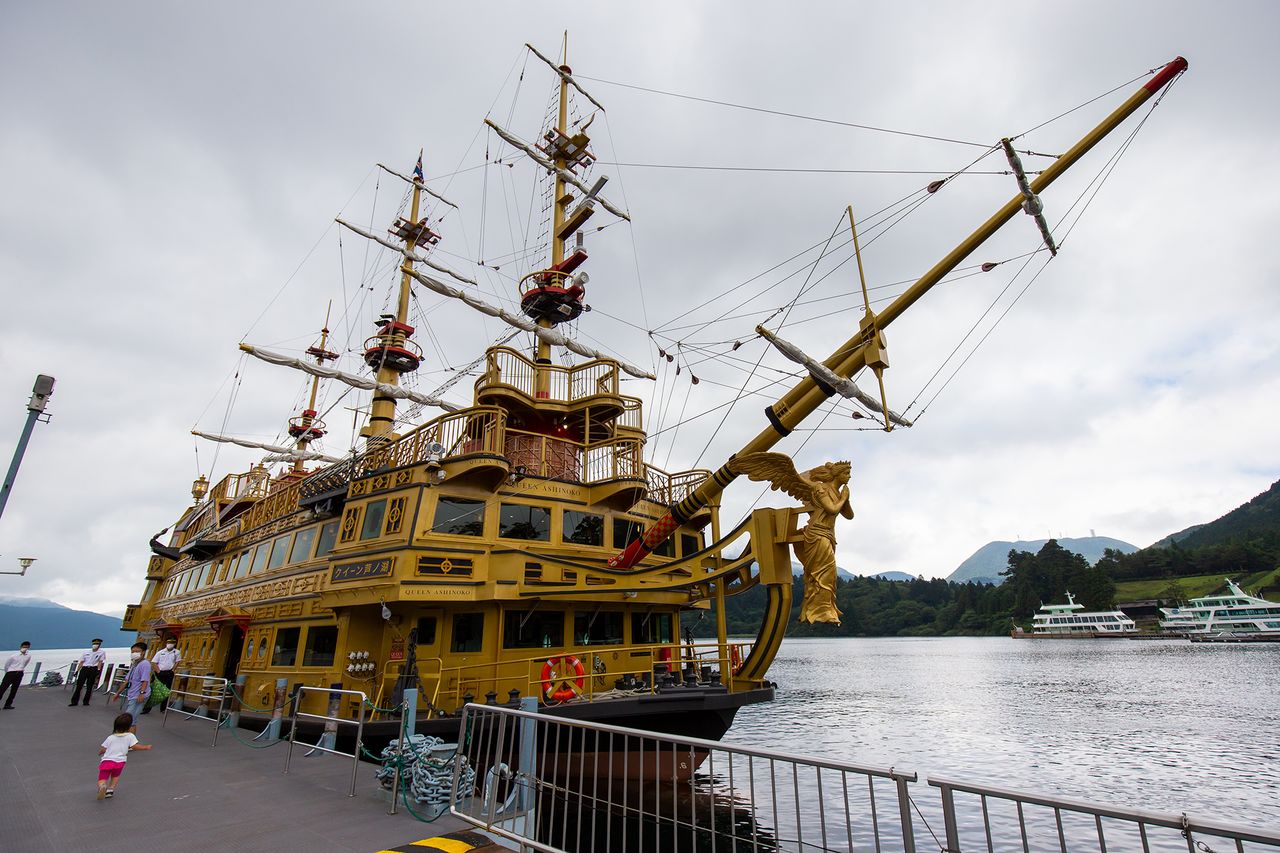 Nike, the Greek goddess of victory, adorns the bow of the Queen Ashinoko. 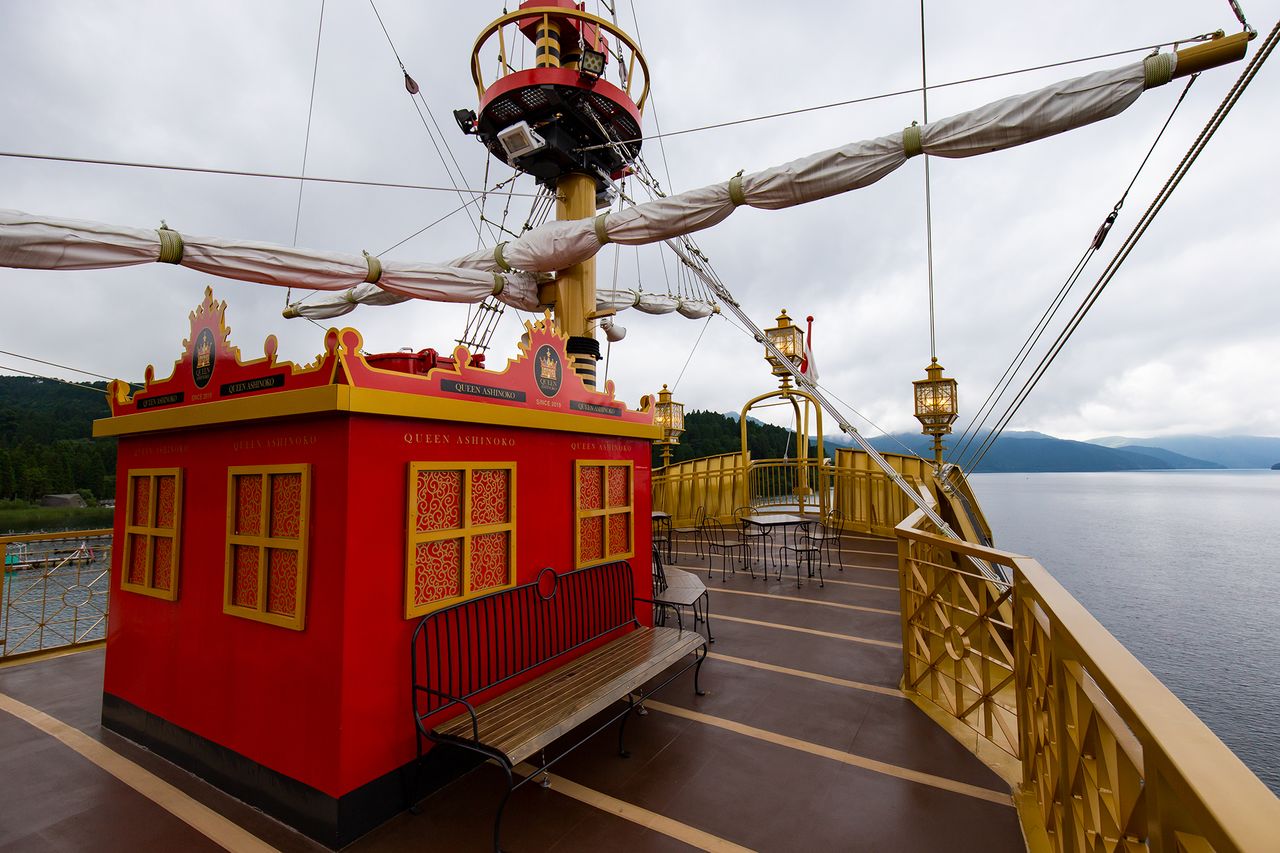 Mitooka Eiji’s design style is evident on the observation deck.

Mitooka’s flair for design is apparent on the inside of the ship as well, right down to the finest detail. The interior combines lavish Western-style decoration and native esthetic, including doors and panels with ōkawakumiko latticework from Fukuoka and floor patterns that evoke local Hakone yosegi zaiku marquetry. 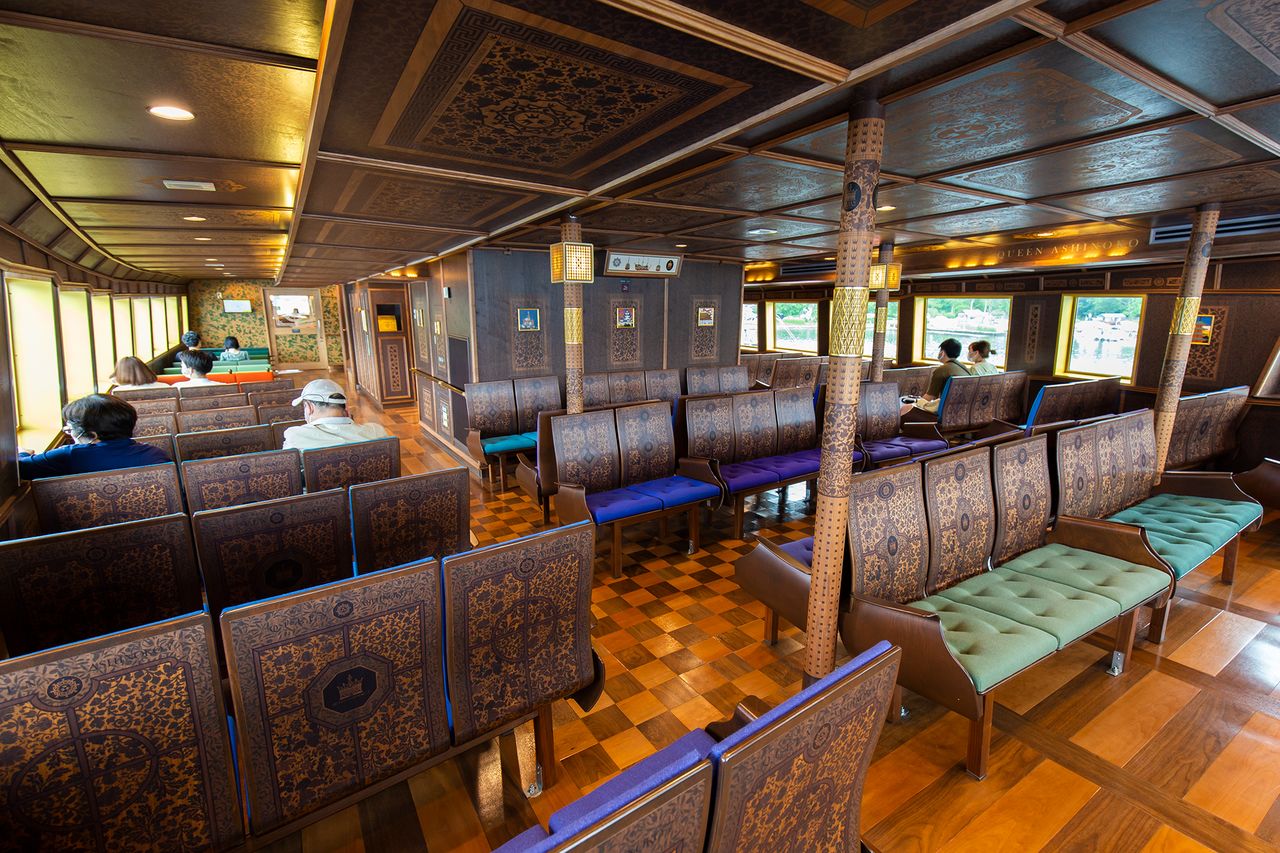 Luxury and comfort awaits passengers even in economy class. 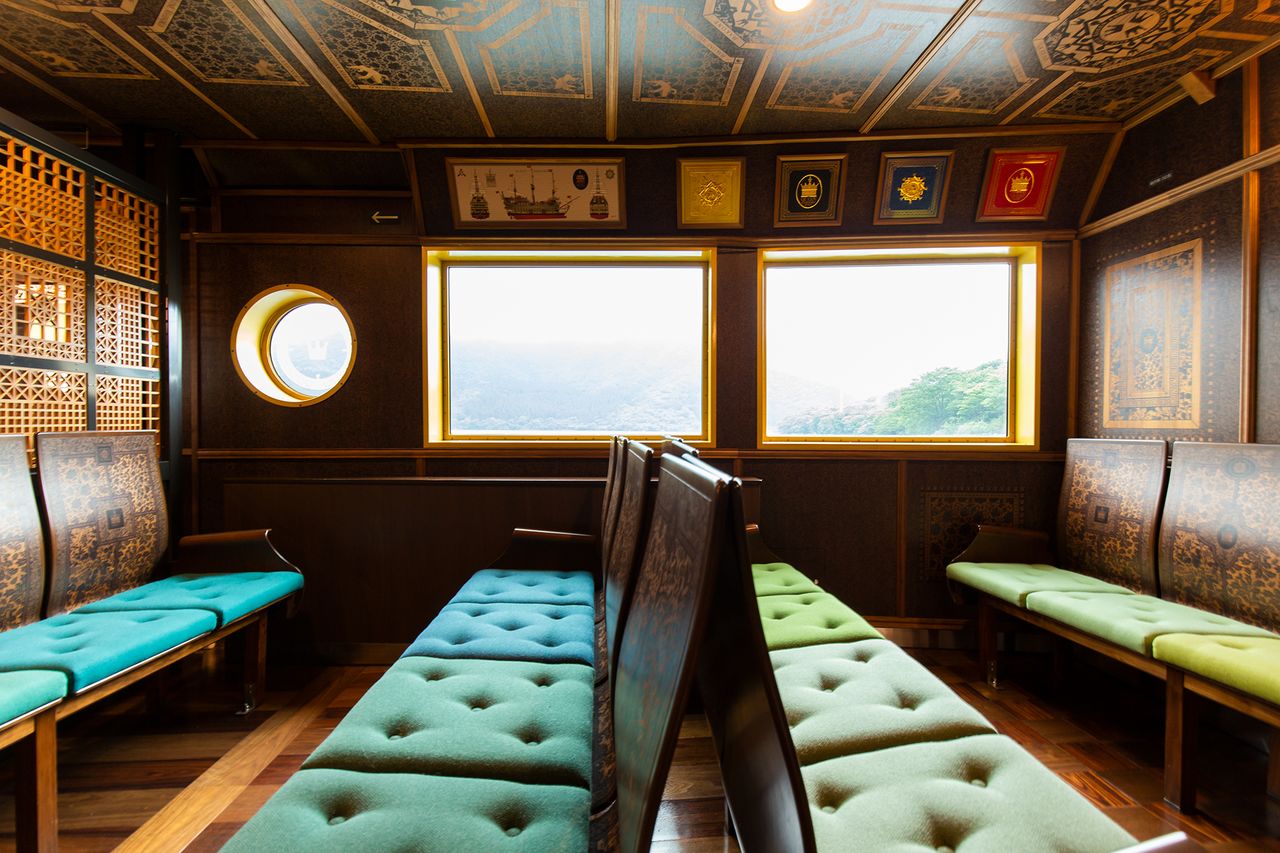 Latticework and other decorative elements adorns the walls and ceilings. 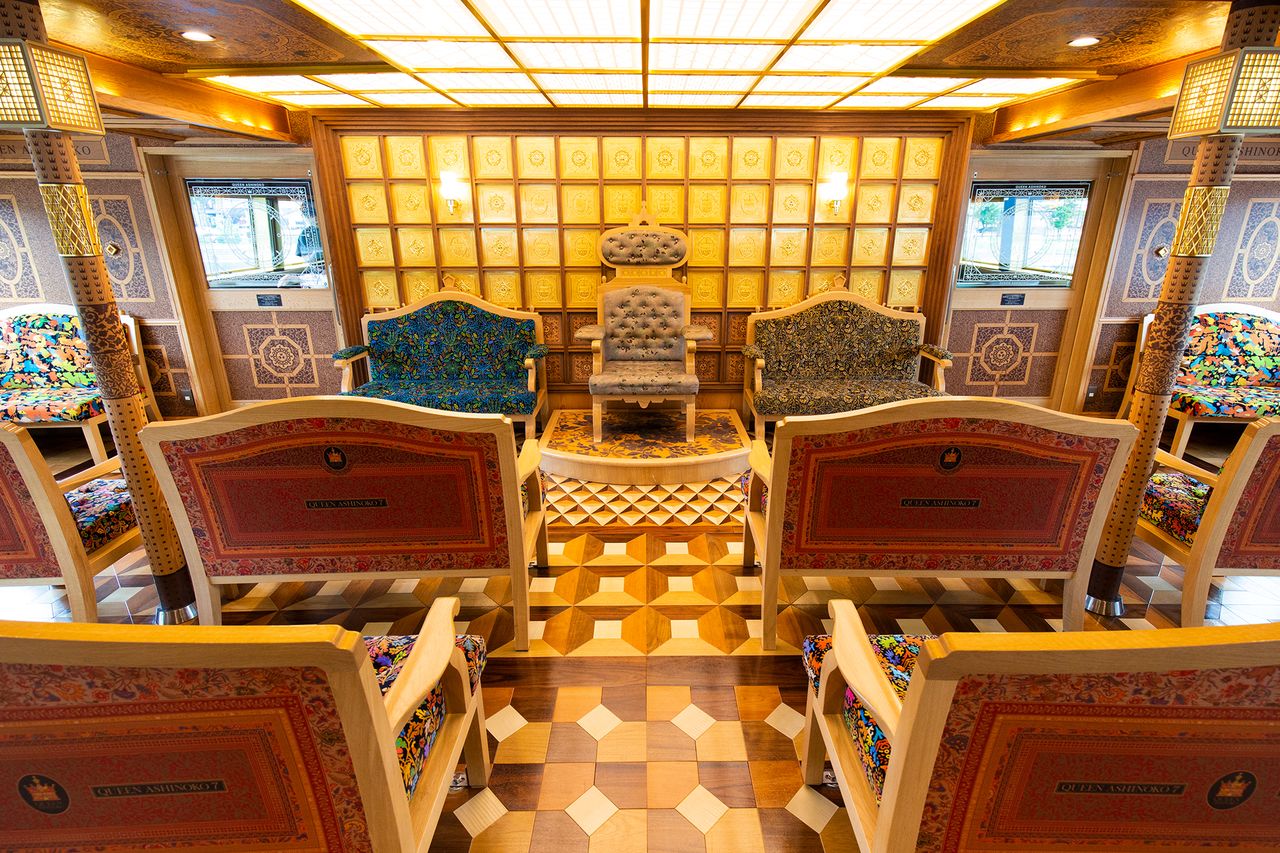 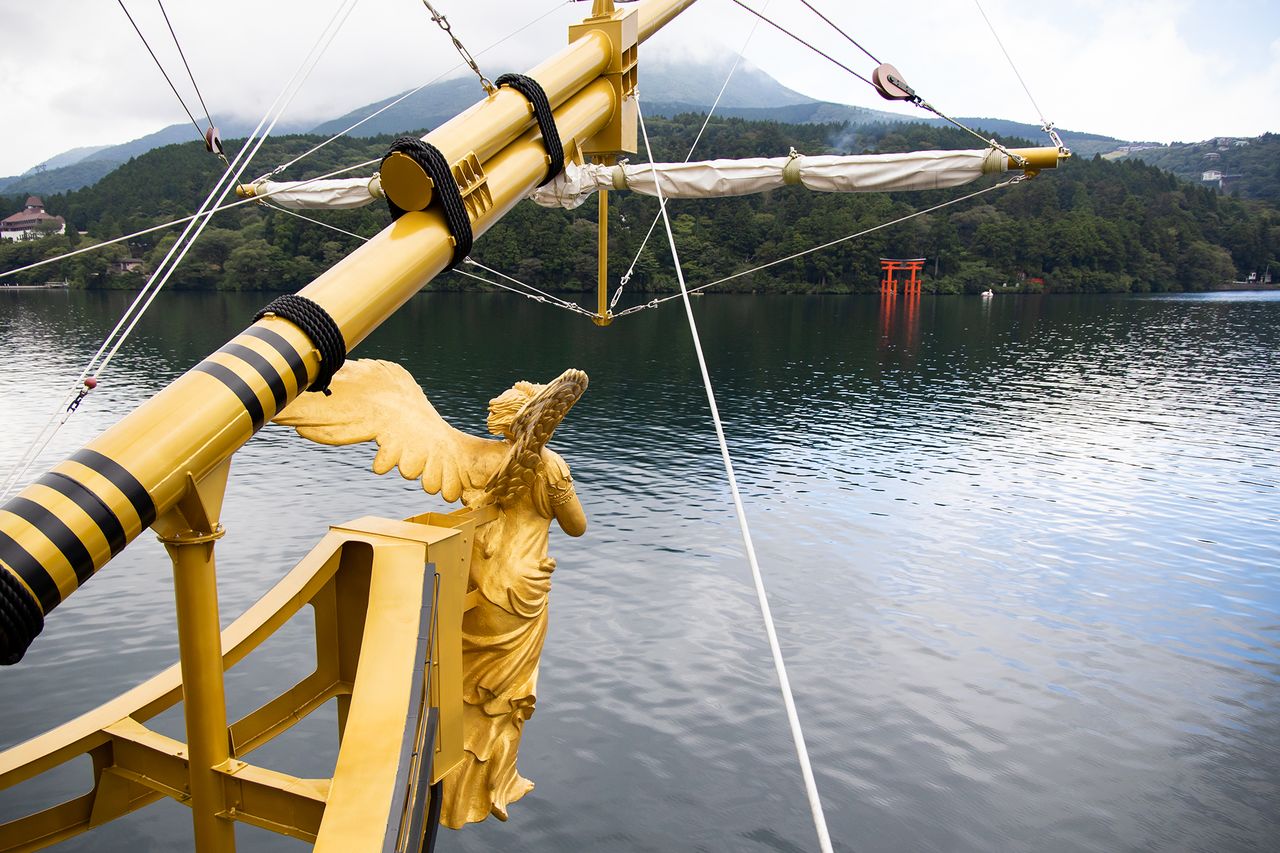 The view of the goddess Nike juxtaposed with the shrine gate can only be had from the first-class deck.

Shibayama says the Queen Ashinoko remains something of a hidden gem due to the drop in tourism along Hakone’s “golden course,” a sightseeing circuit that loops the area by bus, train, boat, and cable car. Just weeks after the ship entered service in April 2019, the Hakone Ropeway was shut down due to an increase in volcanic activity in Ōwakudani. Then, in October, just when the alert level had finally been lowered, a devastating typhoon put the Hakone Tozan Railway out of action. The situation has been further compounded by the coronavirus pandemic.

Shibayama notes that area has started to regain its previous vitality since service on the Hakone Tozan Railway resumed in late July. She notes that the golden course celebrates its sixtieth anniversary this autumn and that there are a range of events planned to mark the occasion. 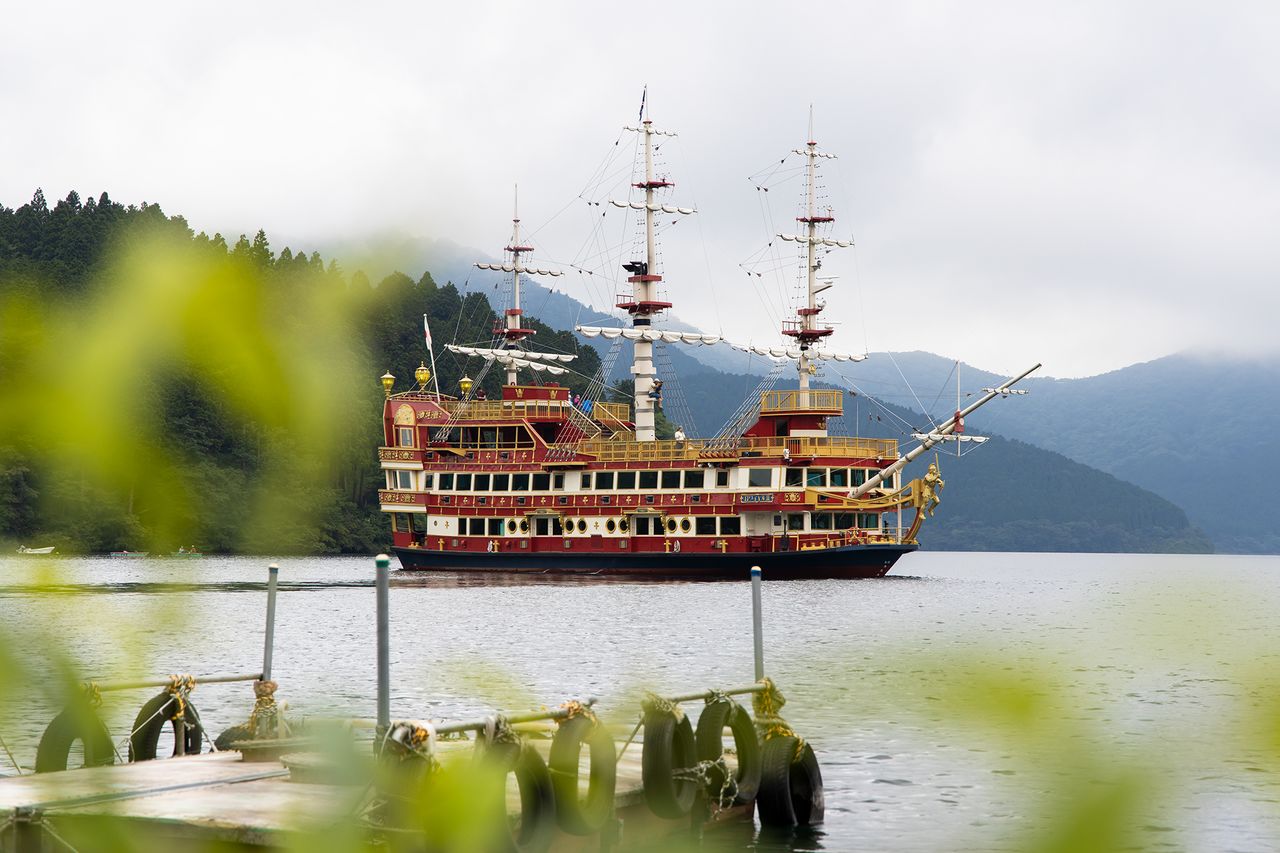 (Originally published in Japanese. Reporting, text, and photos by Nippon.com. Banner photo: The Queen Ashinoko cruises past the Gate of Peace.)