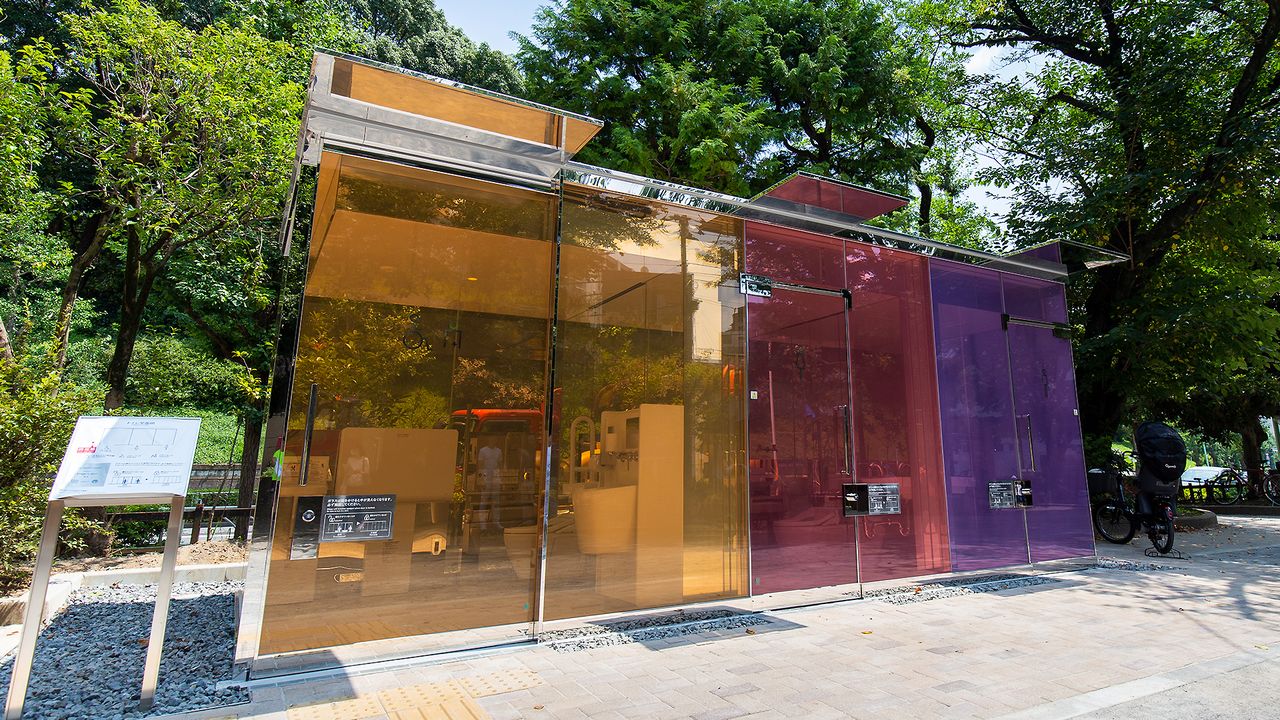 Lifestyle Design Architecture Oct 16, 2020
The unveiling of a transparent public toilet in a Shibuya park captured headlines around the globe. The innovative lavatory designed by architect Ban Shigeru is part of a broader project involving 16 creators that looks to shake up how people view public restrooms.

Now You See Me, Now You Don’t

Public toilets are not typically hot topics of conversation. However, the August unveiling of all-glass restrooms at two Tokyo parks set social media abuzz. The facilities, constructed at Yoyogi Fukamachi Minipark and Haru no Ogawa Community Park in Shibuya, are the antithesis of the drab, concrete structures that typically occupy recreational areas. Boasting colorfully lit, transparent walls that allow anyone to peer into the normally concealed space, these seemingly exhibitionistic lavatories hold a secret—locking the door turns the specially made glass opaque, giving users all the privacy and security of a normal restroom while still allowing light to flood in. The brainchild of award-winning architect Ban Shigeru, the unconventional washrooms are part of a project to change how people view public toilets.

Japanese views of public restrooms are overwhelmingly negative. In a 2016 Ministry of Land, Infrastructure, Transport, and Tourism survey, slightly more than 1% of respondents said they frequently use toilets at parks and other public areas, compared to some 90% who insisted that they rarely or never utilize these communal lavatories. Over half of respondents said that they avoid them altogether. A major reason people gave for shunning public commodes was their uncleanliness. A total of 68% of respondents said they considered facilities unsanitary, while 54% pointed to poor or infrequent cleaning as a deterrent. Safety was another concern, with 51% of people surveyed saying they felt uncomfortable or unsafe using restrooms at parks.

Ban designed the restrooms with glass walls to dispel the perception that public toilets are dark, dirty, and dangerous. Users can easily see how clean stalls are and whether they are occupied, putting minds at ease before stepping inside to answer nature’s call. 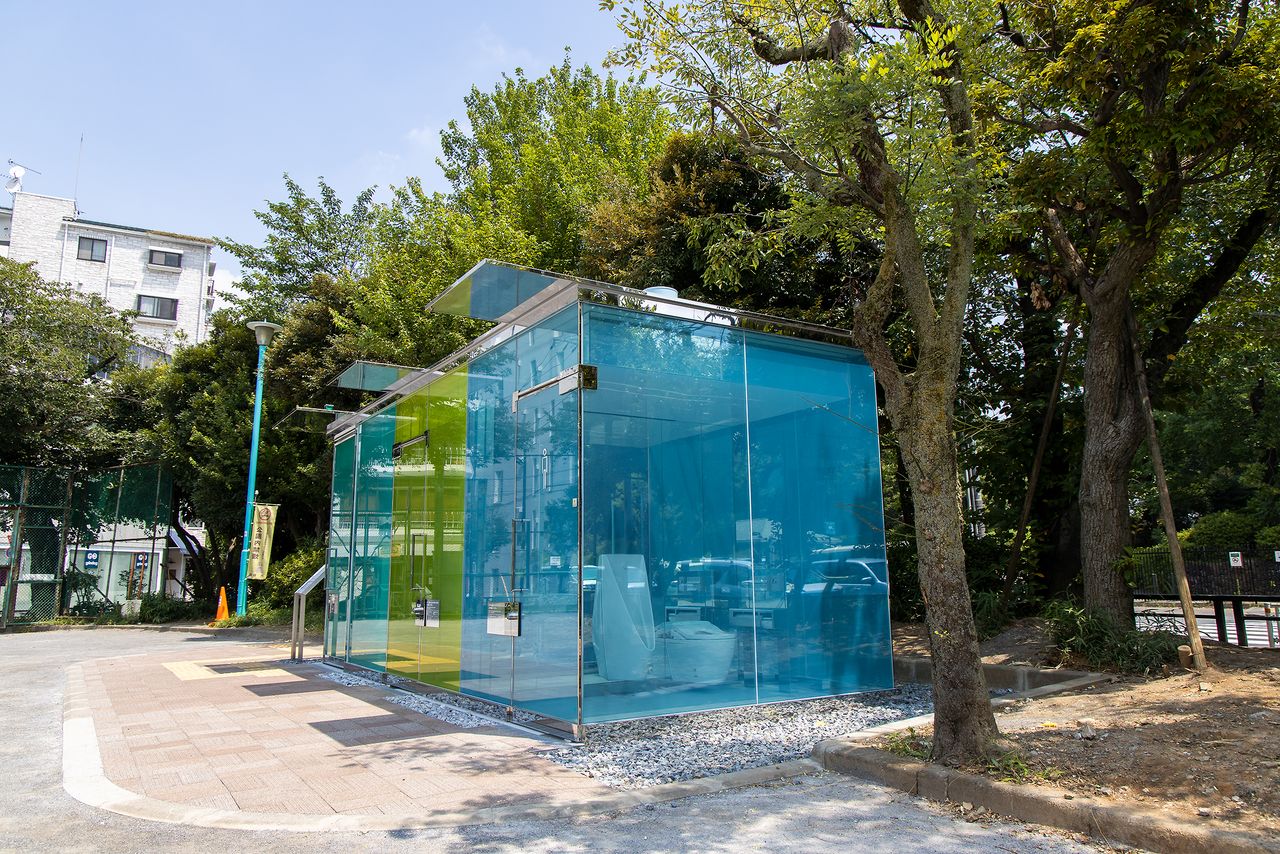 The see-through toilets at Haru no Ogawa Community Park.

A New Approach to Public Loos

The transparent washrooms are part of the Tokyo Toilet project, an initiative by the Nippon Foundation in cooperation with the Shibuya City Government and the Shibuya Tourism Association. The project aims to create unique restroom facilities at 17 locations across the municipality that provide a comfortable user experience and are accessible to all members of the public.

Founded with the aim of contributing to a diverse and inclusive society, the project enlists 16 world-renowned architects and designers, including Ban, Andō Tadao, and Itō Toyoo, all winners of the prestigious Pritzker Prize, as well as other notable creators like Kuma Kengo. The project planner’s choice of Shibuya to showcase the creative designs of the participants reflects the area’s role as a cultural center and crossroads for people from different backgrounds.

Seven facilities are operational as of the time of writing, with the remaining 10 slated to be finished at different times in 2021. 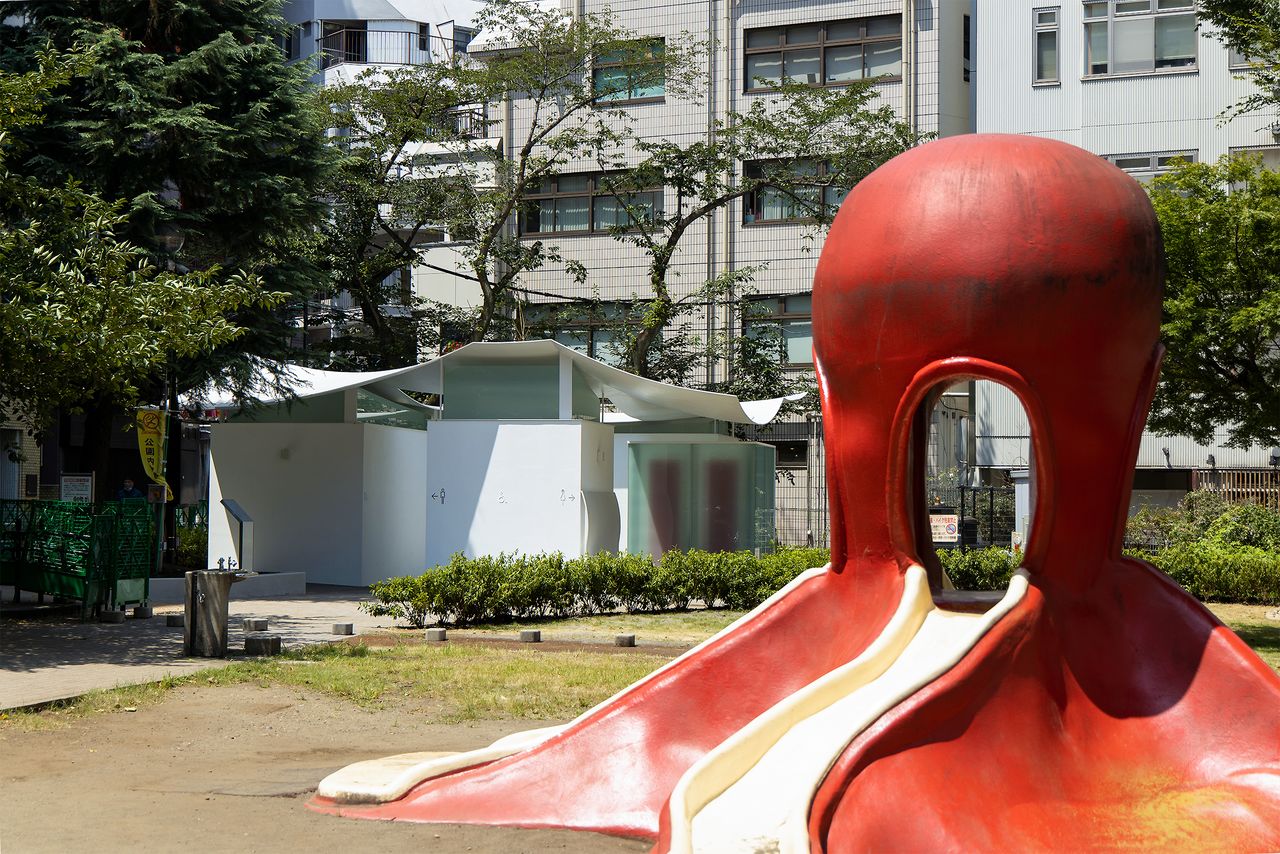 The public restrooms at Ebisu East Park were designed by 1993 Pritzker Prize winner Maki Fumihiko. The squid-like appearance was inspired by the ground’s nickname, “octopus park.”

The Tokyo Toilet project also involves a number of leading corporate partners. Homebuilder Daiwa House Industry is involved in the layout and the construction of facilities, and toilet maker Toto is providing equipment and aiding in design. Art director Satō Kashiwa is overseeing the signage and pictograms displayed at the restrooms.

Nippon Foundation Executive Director Sasakawa Junpei says that building the restrooms is only one aspect of the project and emphasizes that maintaining the facilities in a pristine state will be key. Dedicated cleaning staff clad in uniforms by Japanese fashion designer Nigo will look after upkeep of the restrooms, with maintenance status posted online. Sasakawa hopes that these efforts will draw visitors to the areas where the toilets are located and encourage people to use the facilities in a responsible and considerate manner. 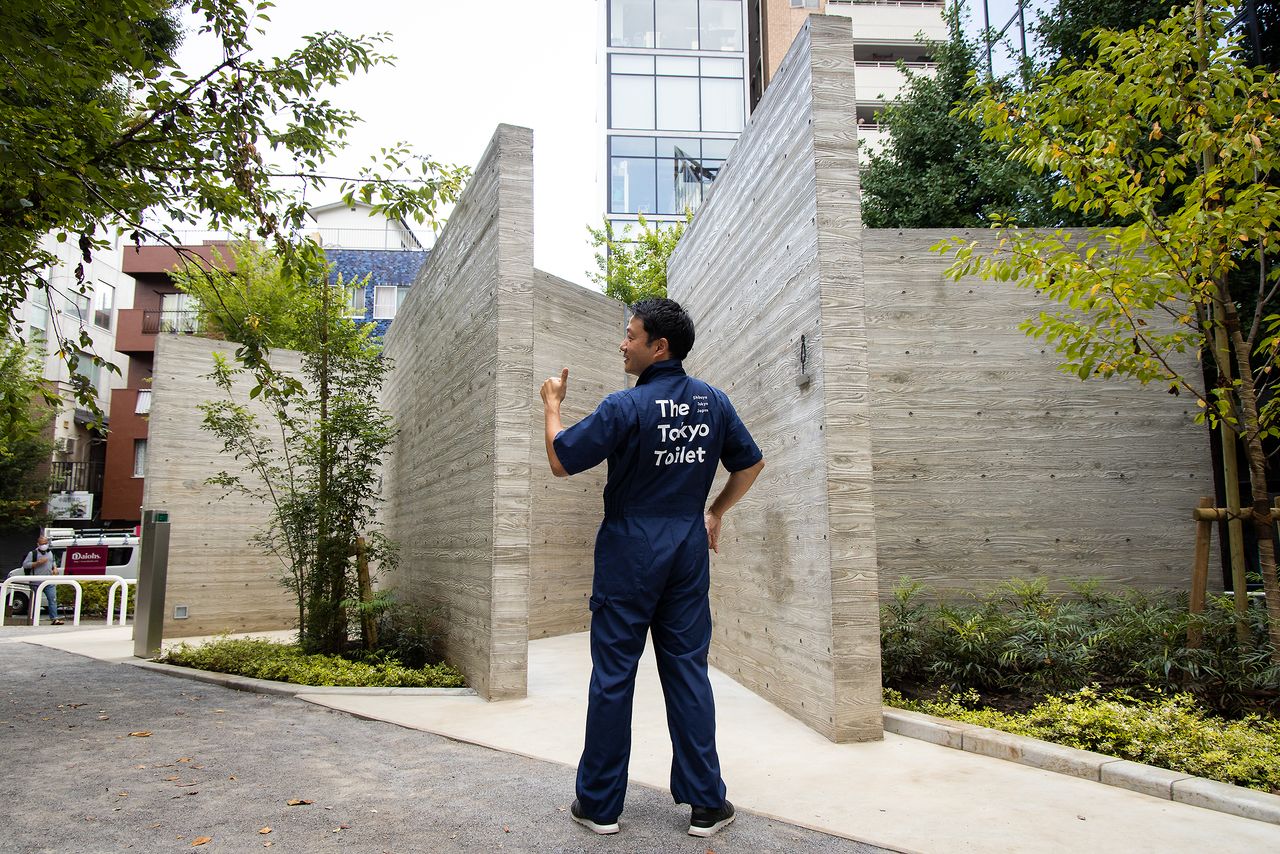 Ban has put his unique stamp on a wide variety of projects ranging from structures like the Mount Fuji World Heritage Center in Shizuoka Prefecture to simply designed cardboard and cloth partitions for use at evacuation centers. His radical, see-through design for the restrooms caught the attention of people in Japan and around the world. During the day the facilities provide a colorful touch to the parks, while at night their illuminated walls brighten the surroundings and invite users to step inside. 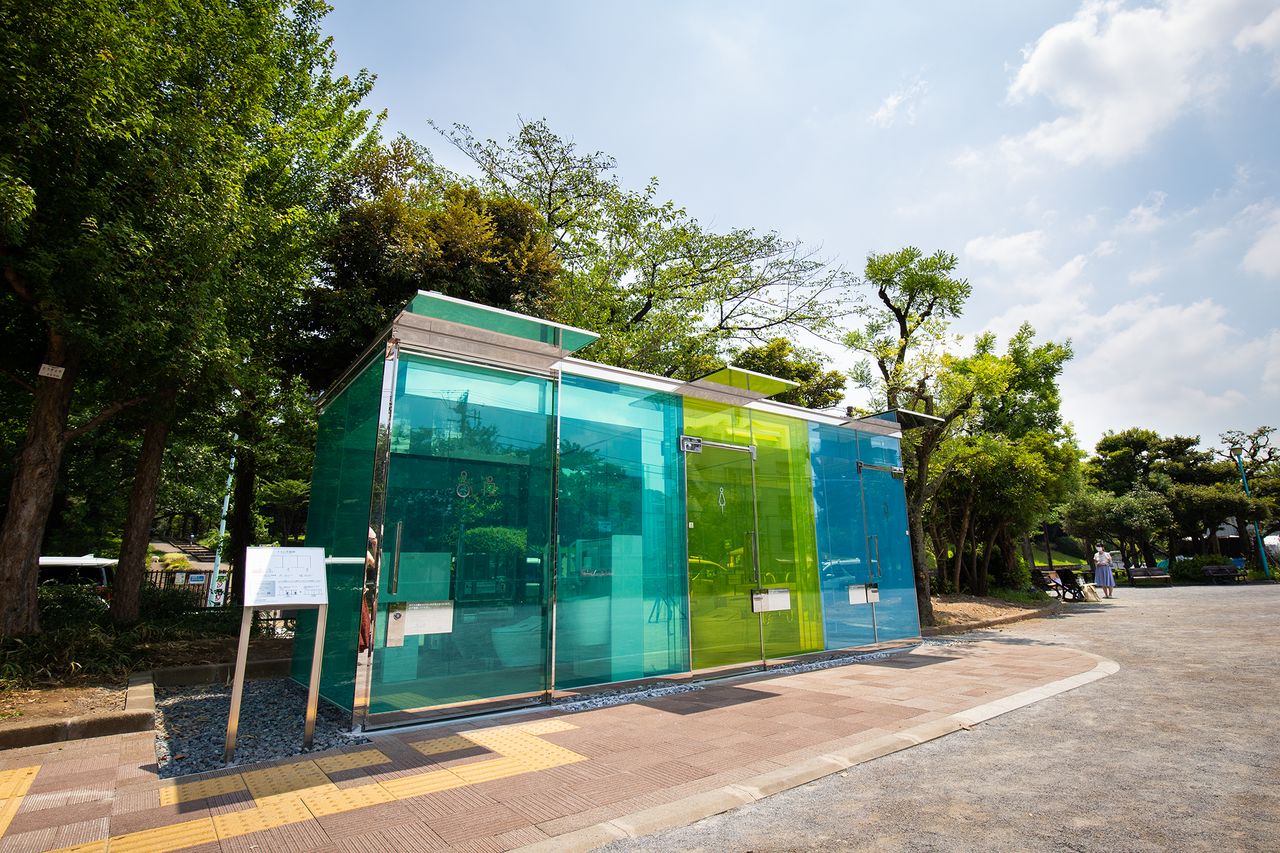 Ban chose a “cool” color scheme for the restroom at Haru no Ogawa Community Park, while the facility at Yoyogi Fukamachi Minipark boasts a “warm” motif. 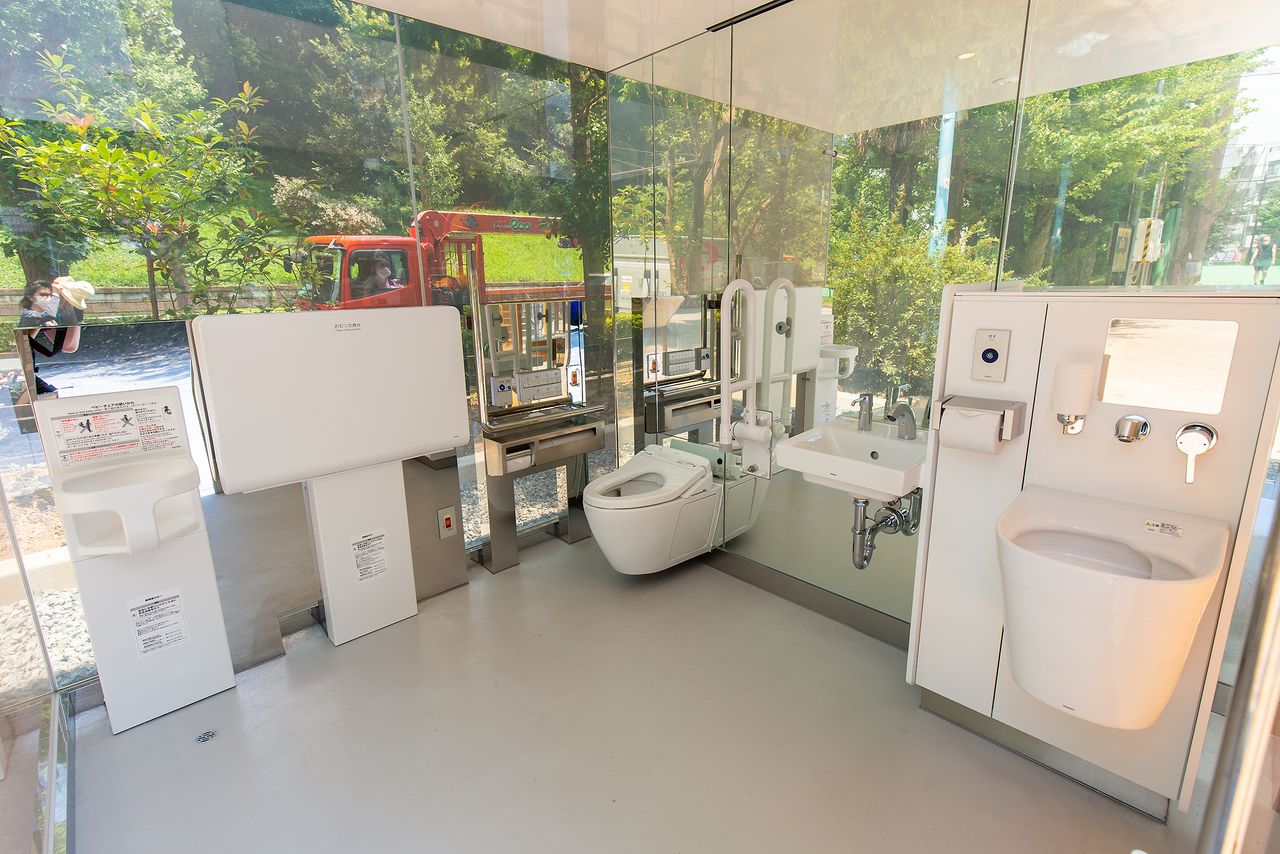 The restrooms are equipped with a changing table and an ostomate toilet. 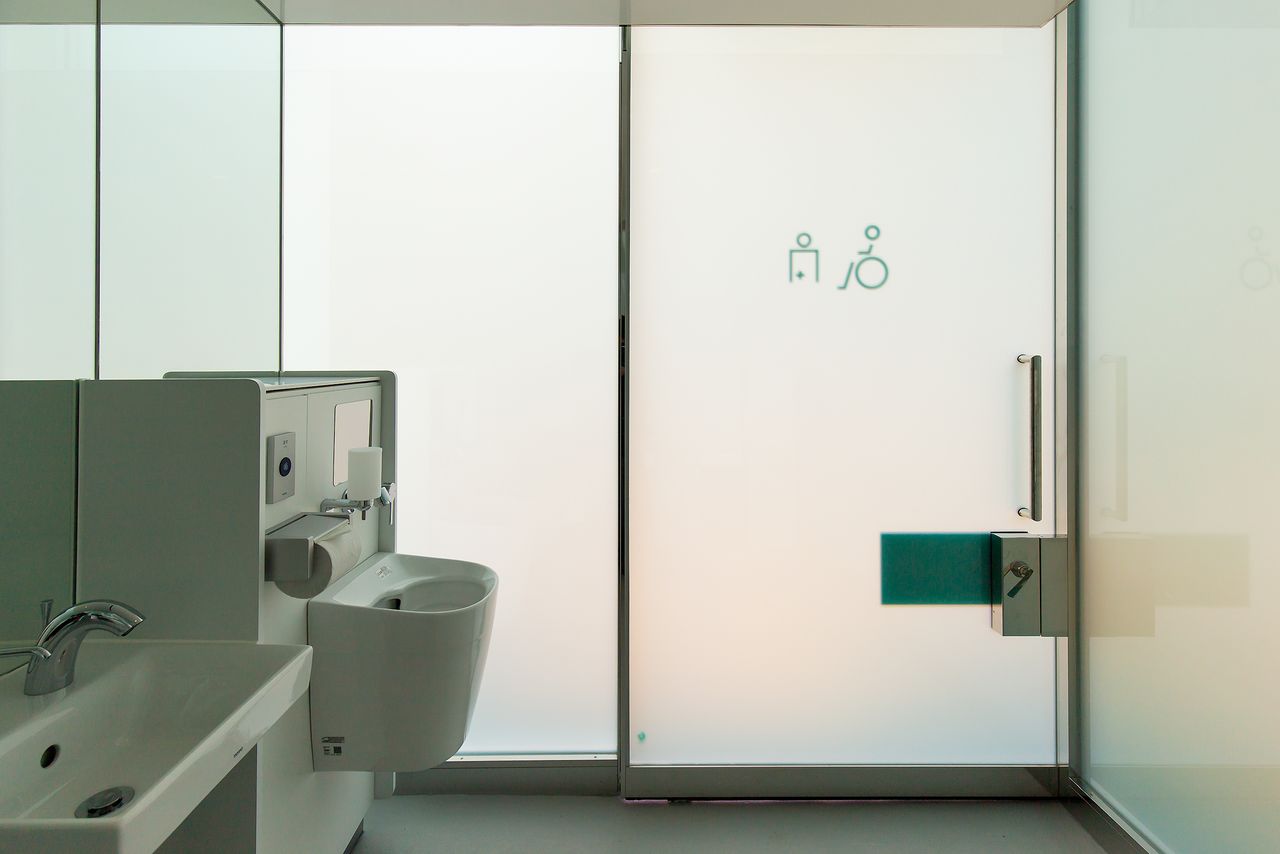 The clear walls turn opaque when the door is locked. 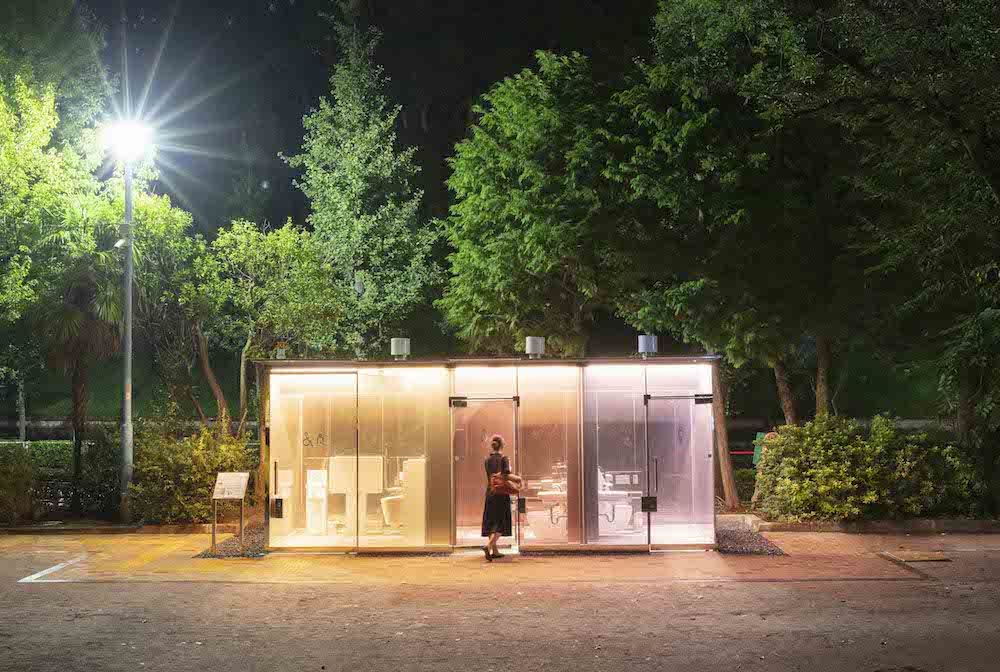 The facilities brighten the park at night, increasing the sense of safety and making them easier to use. (Photo courtesy of the Nippon Foundation)

Katayama, an interior designer and founder of the firm Wonderwall, has lent his distinct style to commercial complexes in such global fashion hubs as New York, Paris, and Tokyo’s Ginza. His design for the public restroom at Ebisu Park melds with the relaxed, playful character of the space. Consisting of 15 carefully arranged concrete walls, the facility appears maze-like. 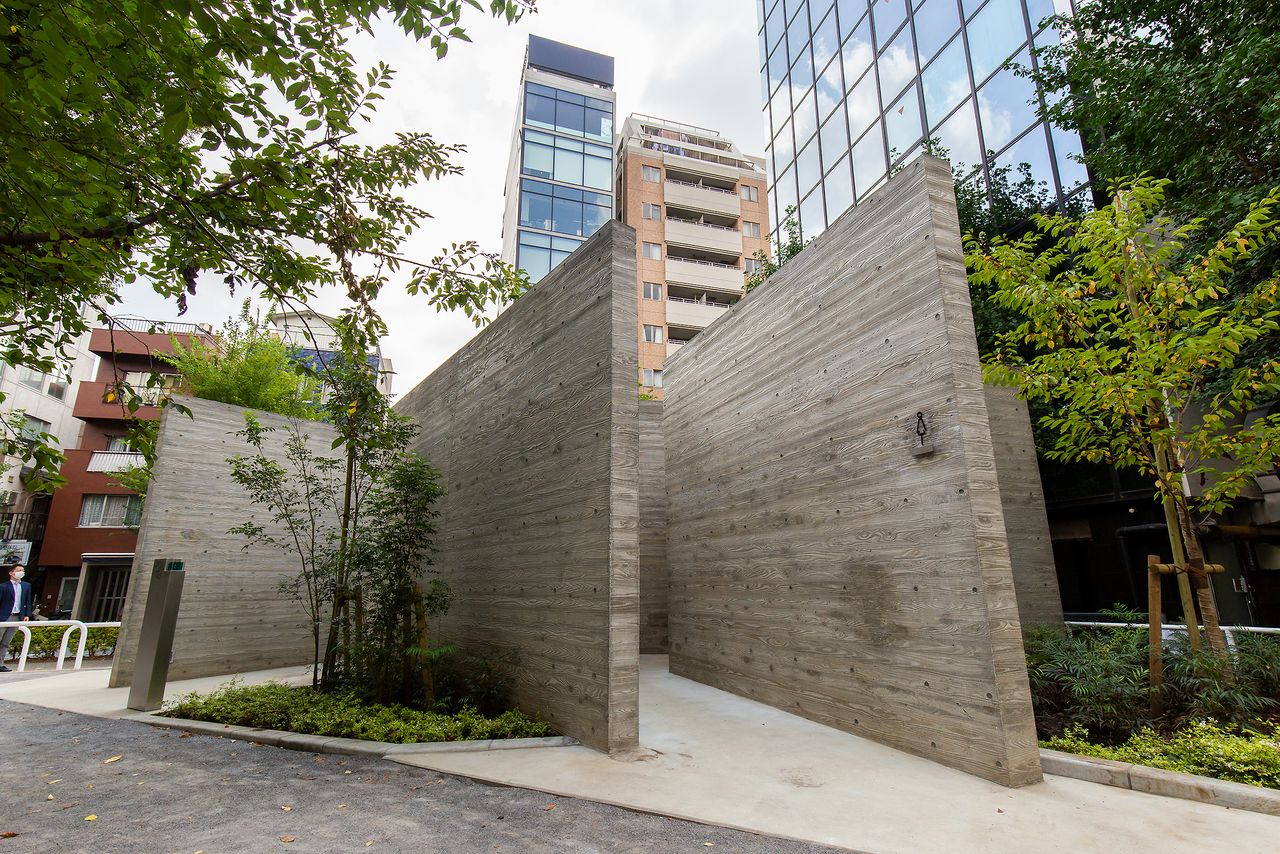 The plain concrete walls give the facility an unrefined beauty. 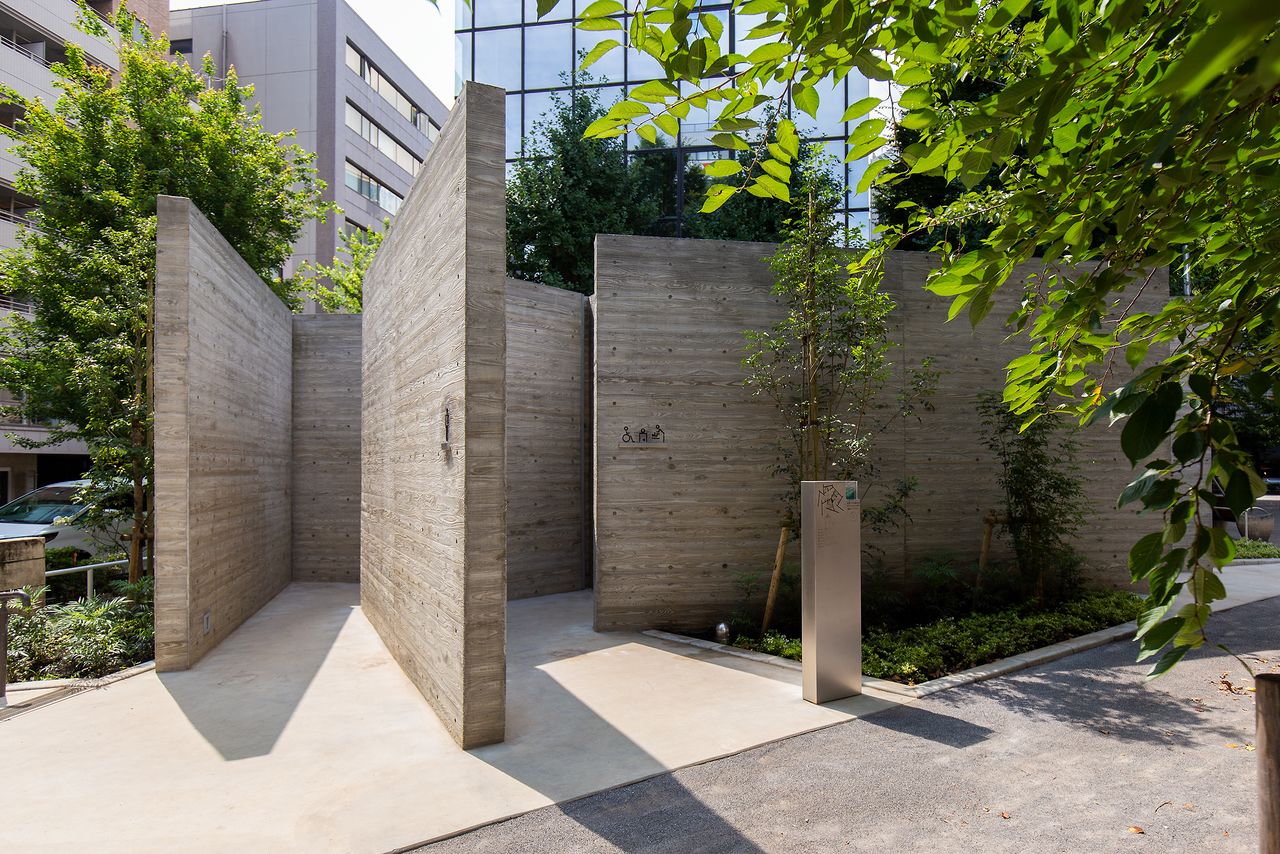 The entrance to the men’s restroom has a labyrinth-like appearance, but is designed to be easily accessible to any user. 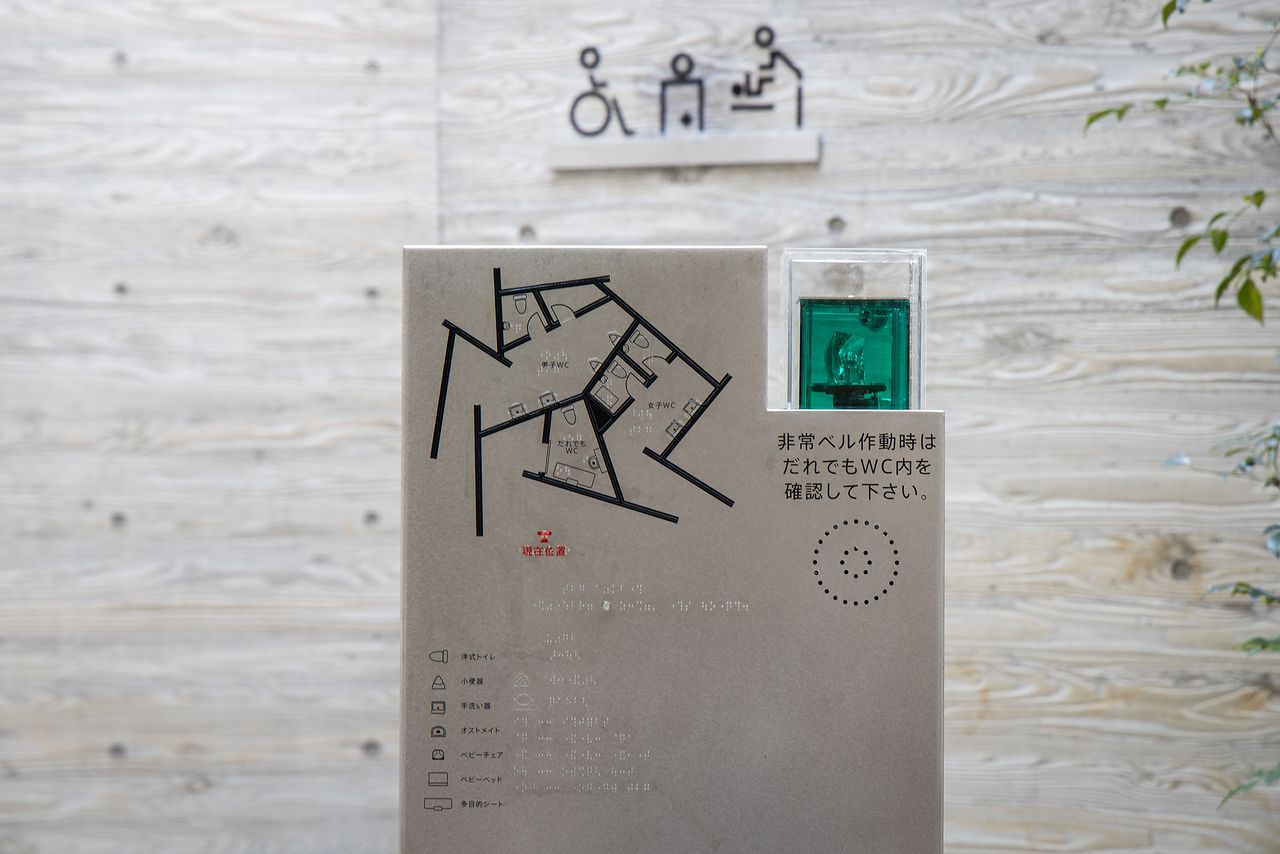 The sign showing the layout of the facility is easy to notice and is equipped with an emergency light. 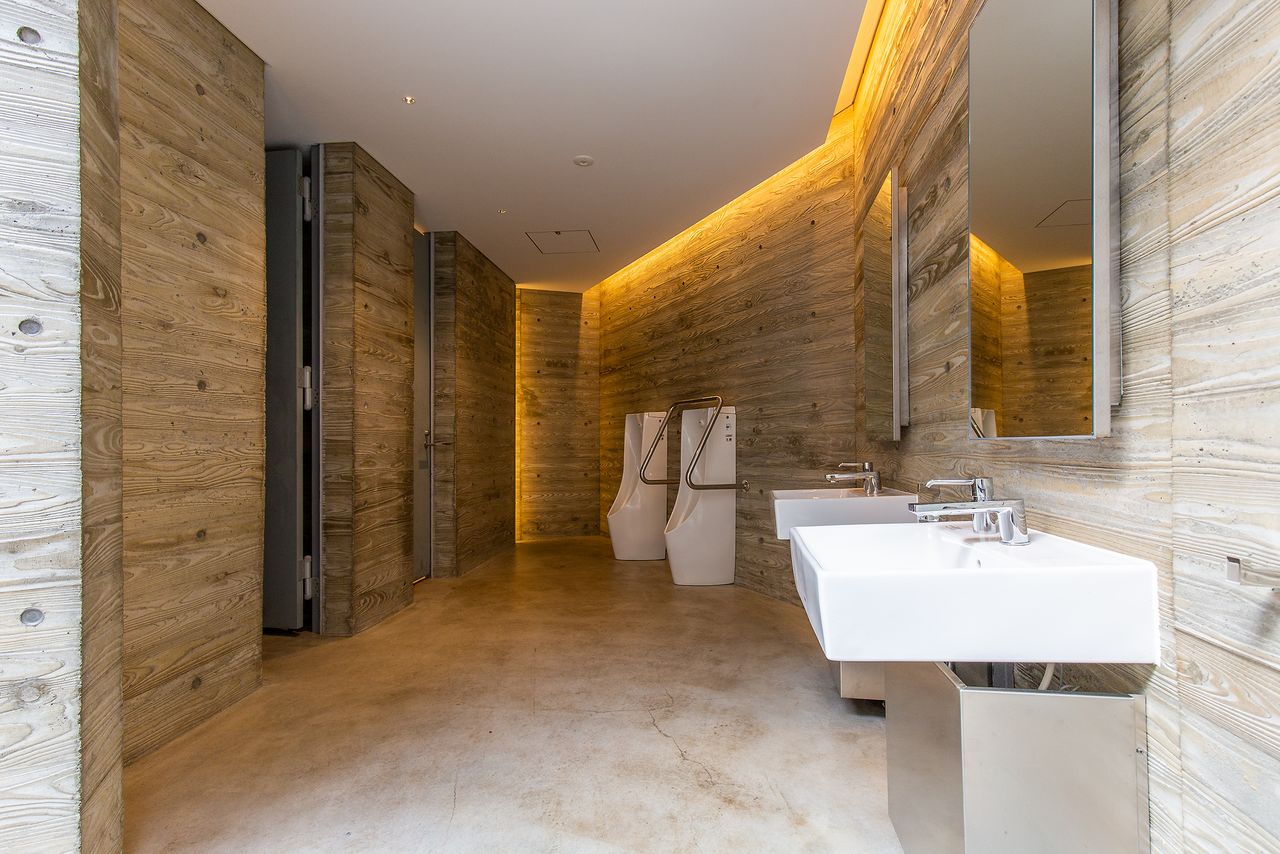 The interior of the restroom is spacious and refined.

Tamura is a product designer based in New York. Her design for the public restroom, which sits on a sliver of land sandwiched between a road and a concrete railway embankment, is intended to give users a sense of privacy and safety. The red walls of the building are like sheets of origami paper, giving the structure a spirited feel. The layout takes full advantage of the limited space and the three stalls are surprisingly roomy and comfortable. 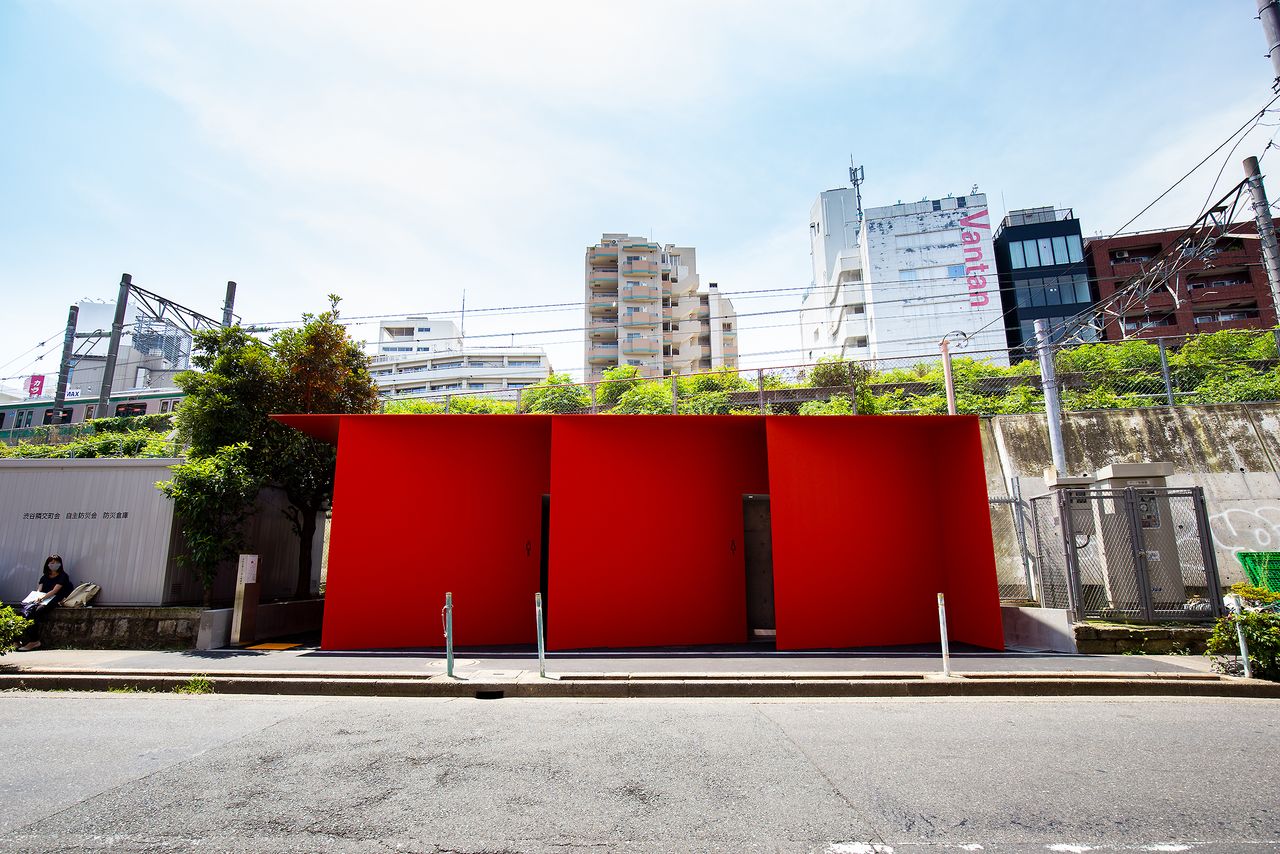 The red walls of the facility contrast the drab, jumbled surroundings. 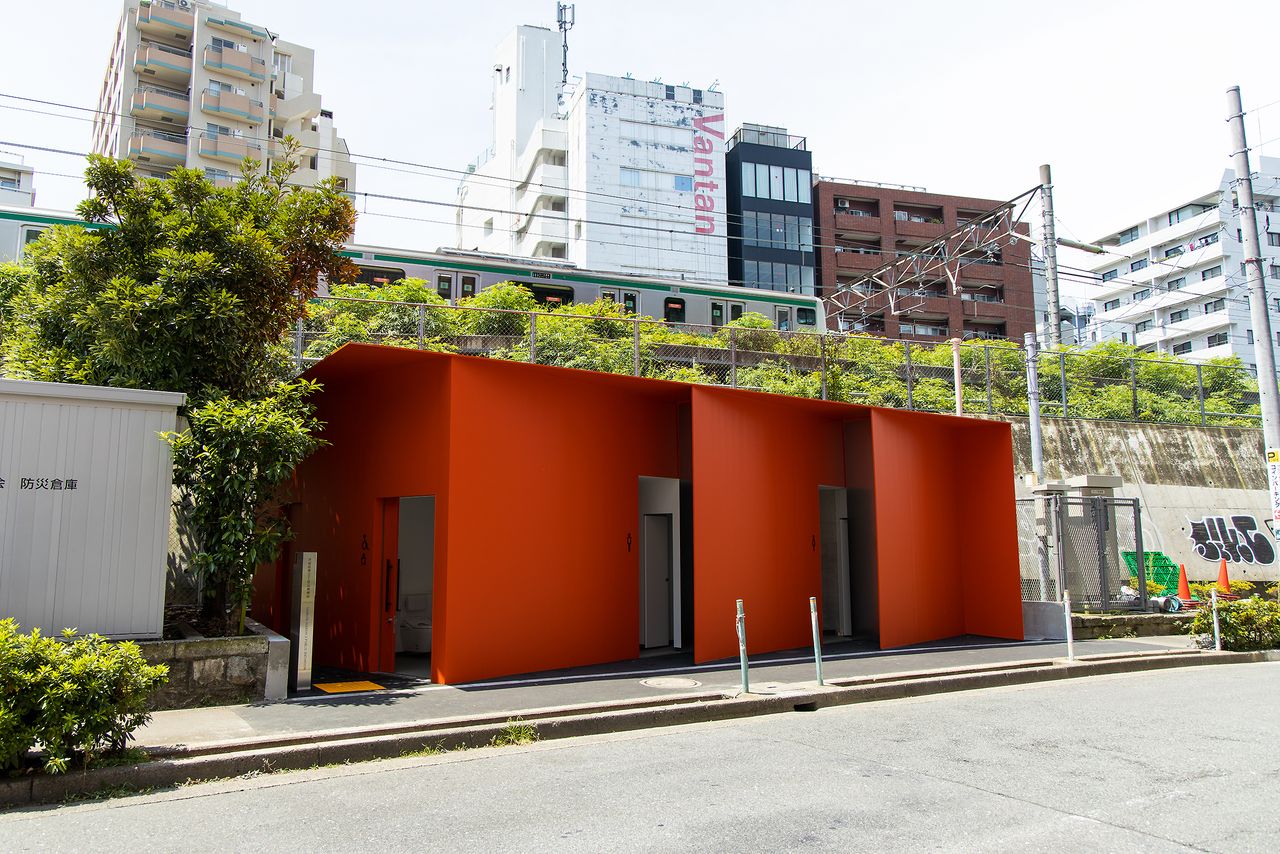 The public restroom is a short walk from Ebisu Station. 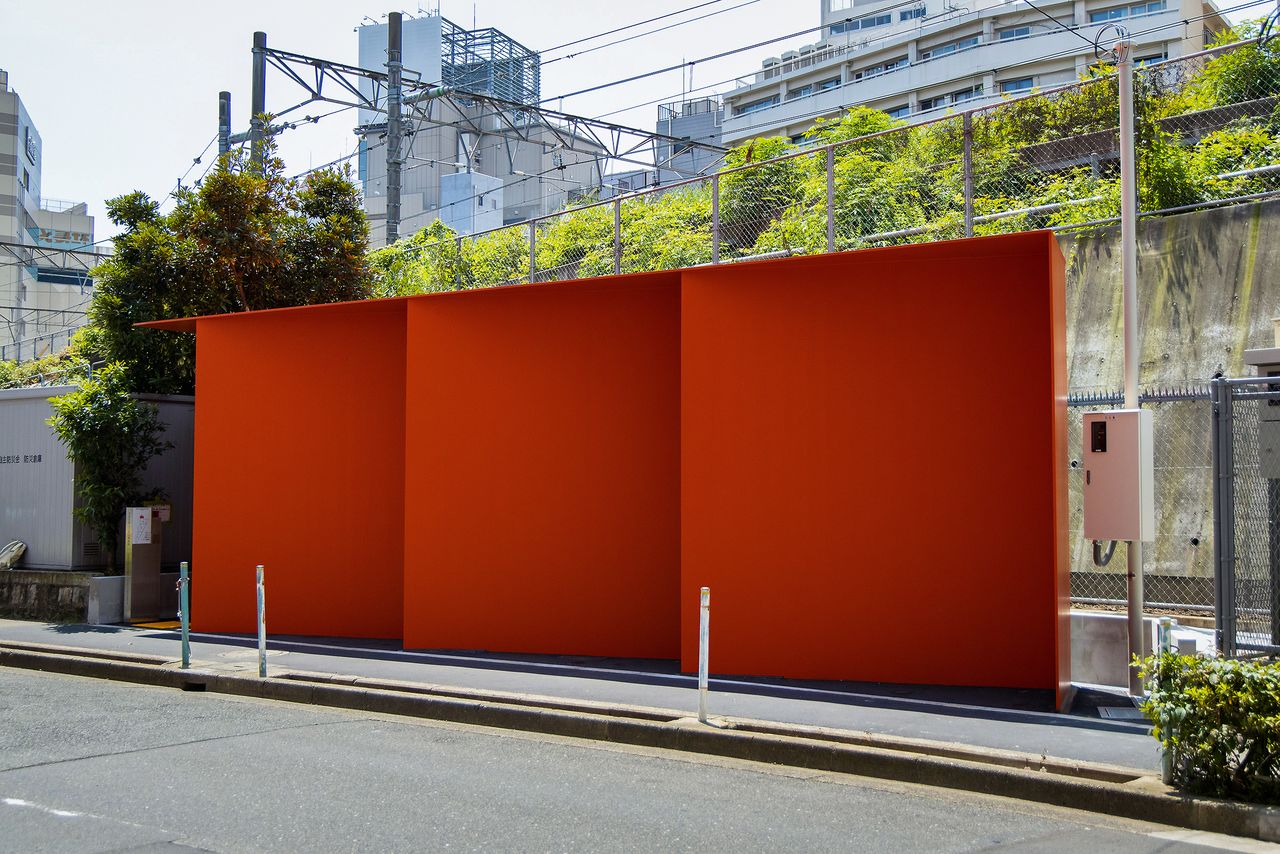 Viewed from a distance, the facility appears to be an art installment. 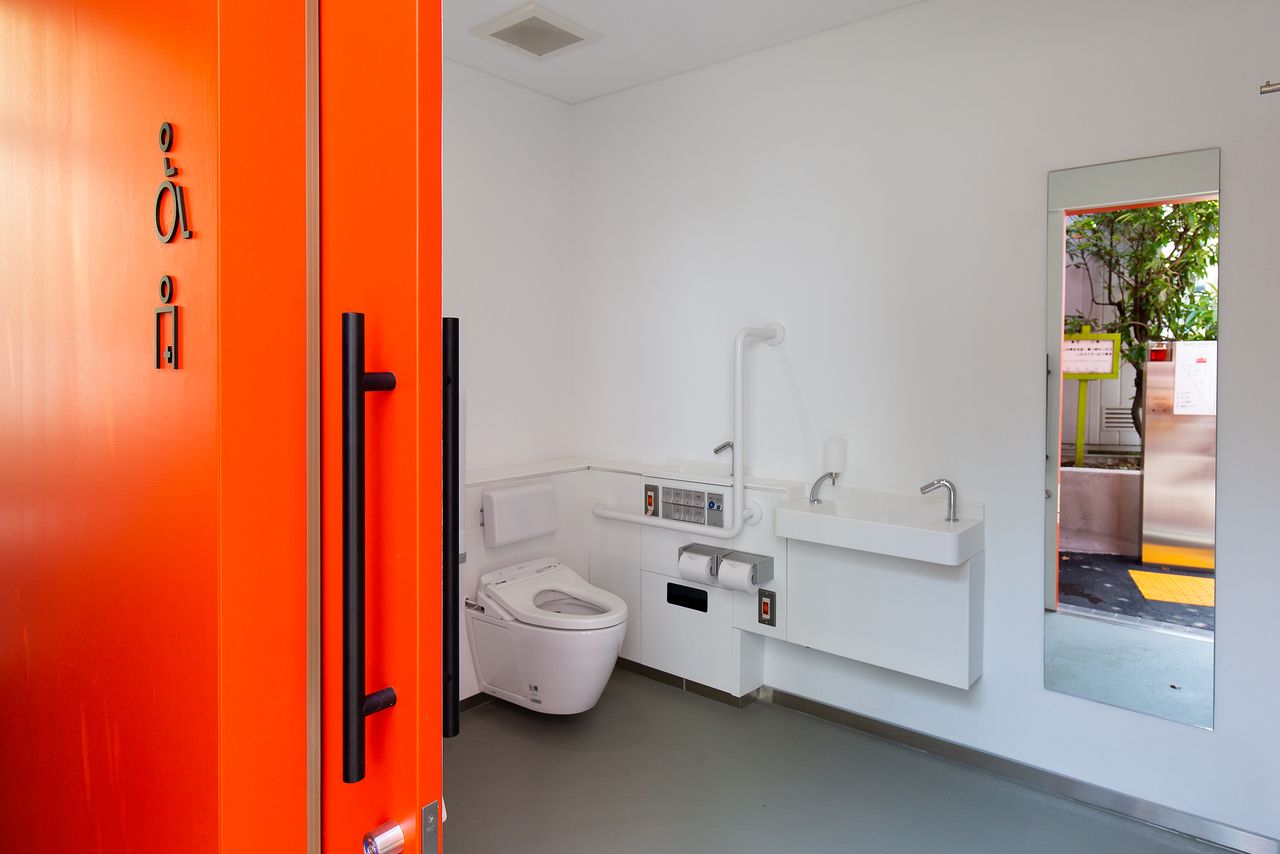 The stall interiors are smartly designed and spacious.

Maki’s long list of creative works include the Tokyo Metropolitan Gymnasium, Makuhari Messe convention center, and multipurpose building Daikan’yama Hillside Terrace. He designed the restroom at Ebisu East Park as a pavilion, with the men’s and women’s sections separated by a small, central patio containing a young tree. The grounds are known locally as “octopus park” and the elegantly curved roof adds to the undersea theme with its squid-like appearance. 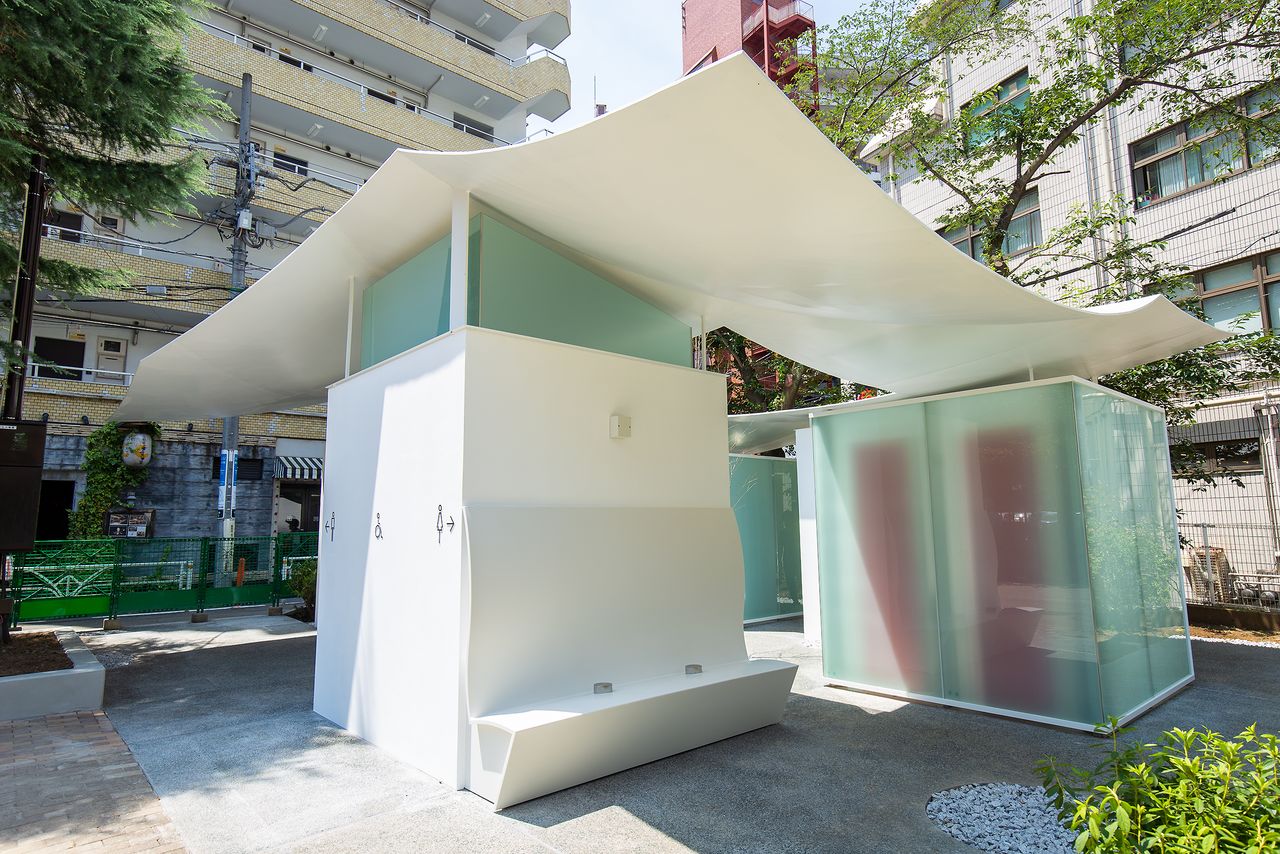 The men’s, women’s, and multipurpose cubicles are connected by a curved roof. Visitors can rest on a bench built into the outer wall. 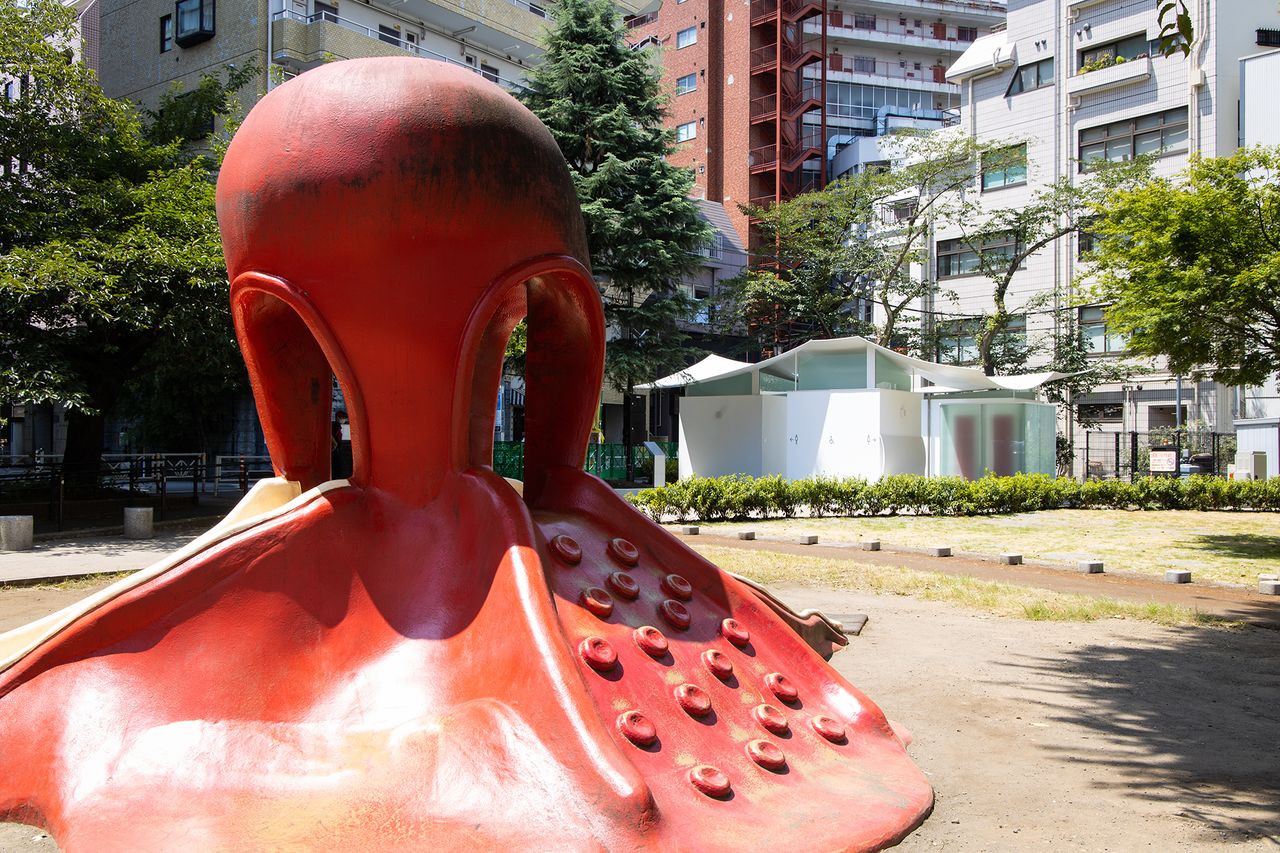 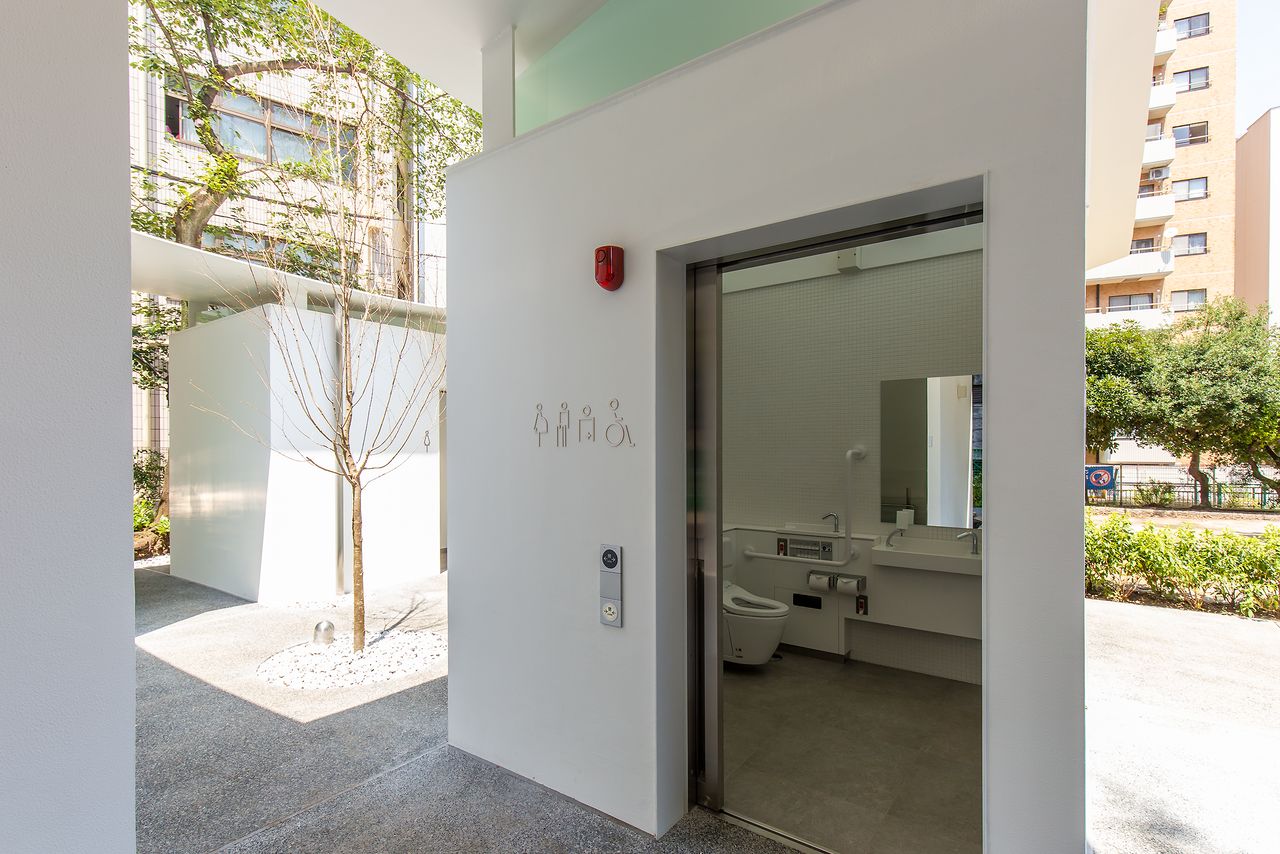 The stalls surround an inner patio. 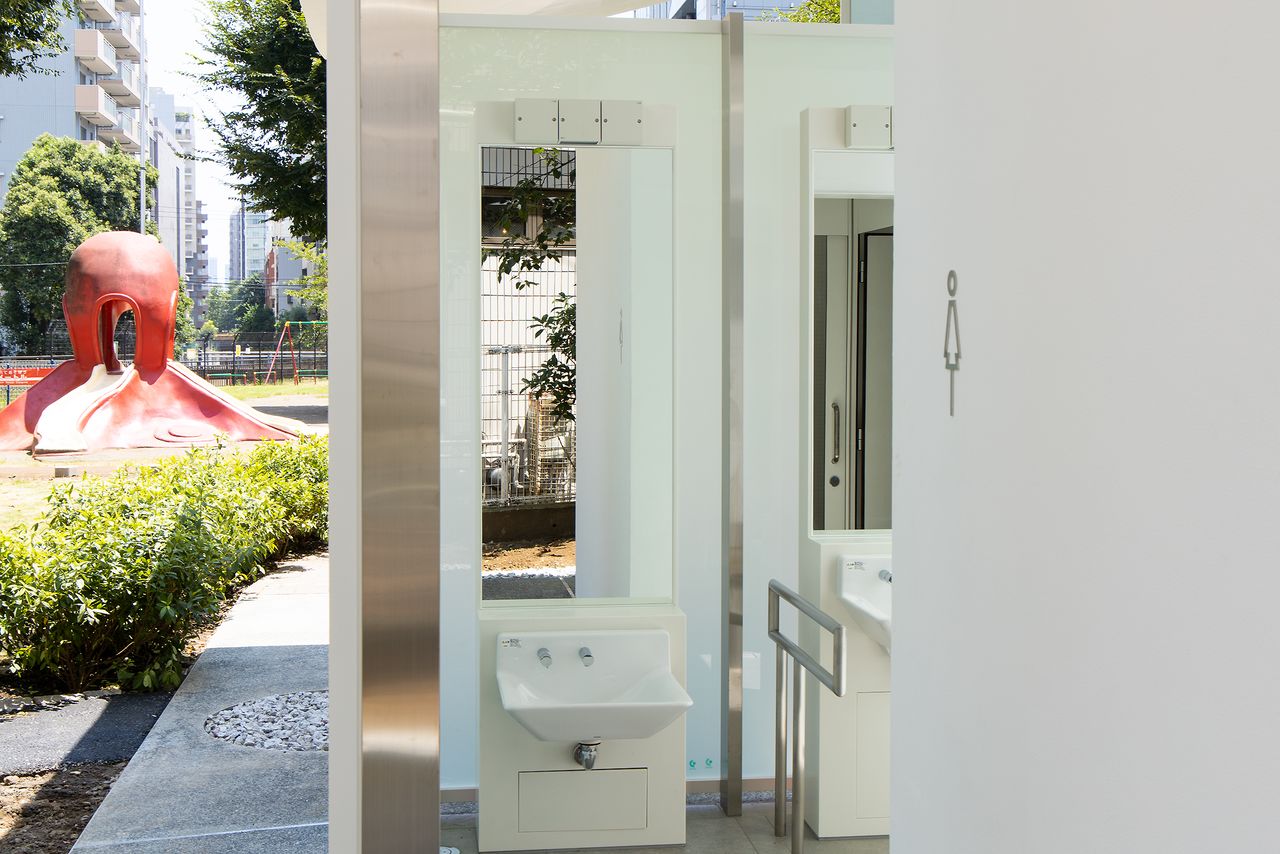 The restrooms have high- and low-set sinks to accommodate all users.

Sakakura is the architect behind buildings like the apartment towers at the Tokyo Midtown complex. He has turned a dilapidated, seldom-used public restroom near Hatagaya Station into an inviting space for the droves of students and office workers who pass by in the mornings and evening. The illuminated exterior also lights the park at night. 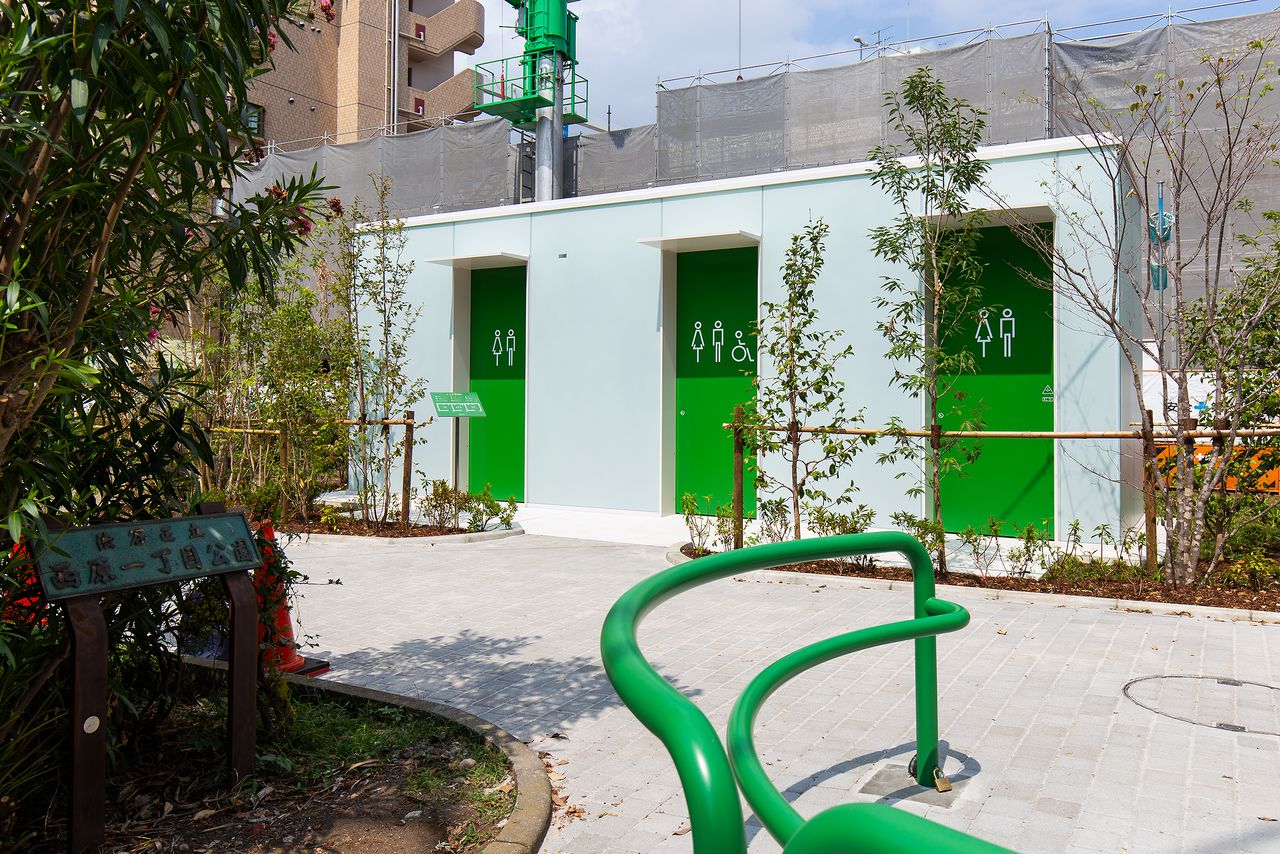 The simple design of the restroom blends in with the surroundings while remaining approachable to passersby. 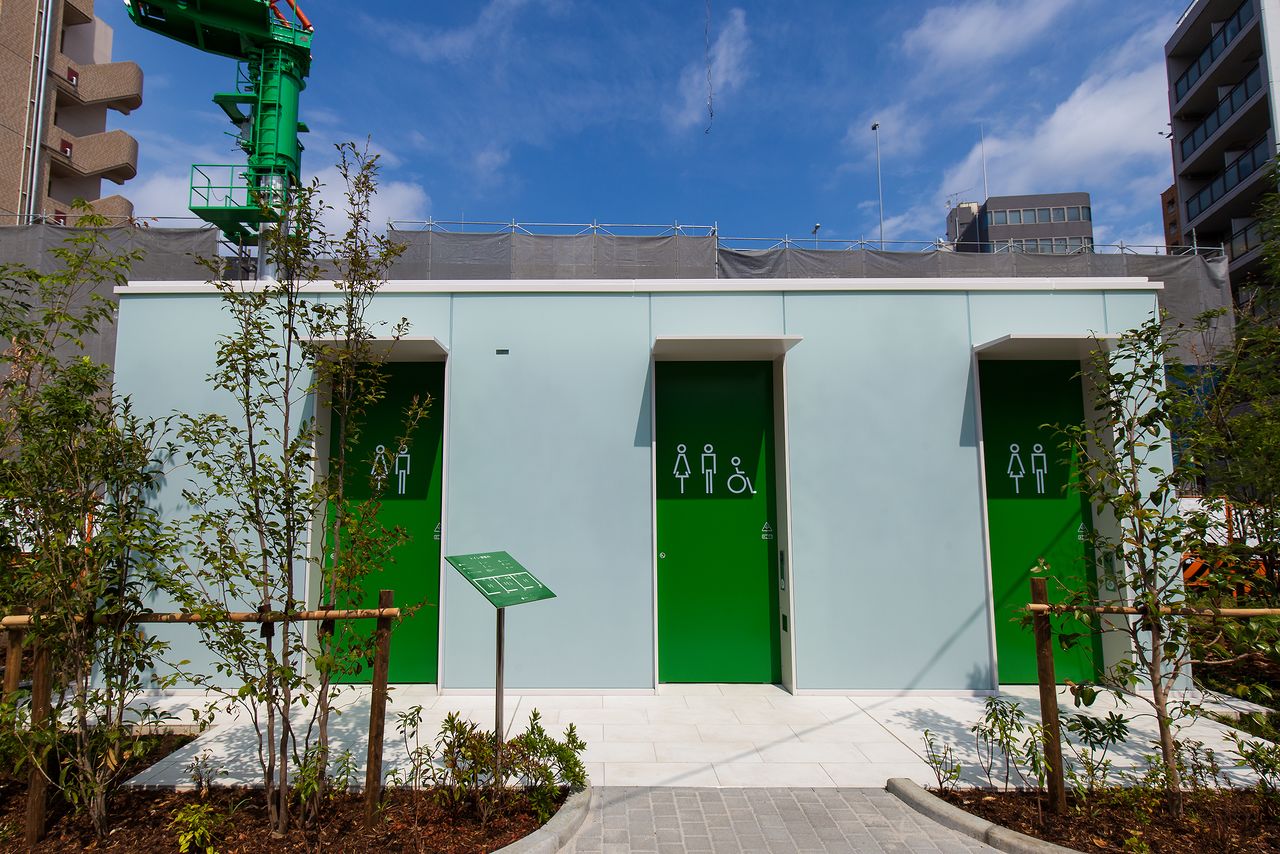 The exterior walls are made of frosted glass, ensuring privacy while allowing in sunlight. Illuminated at night, the facility shines like a lantern. 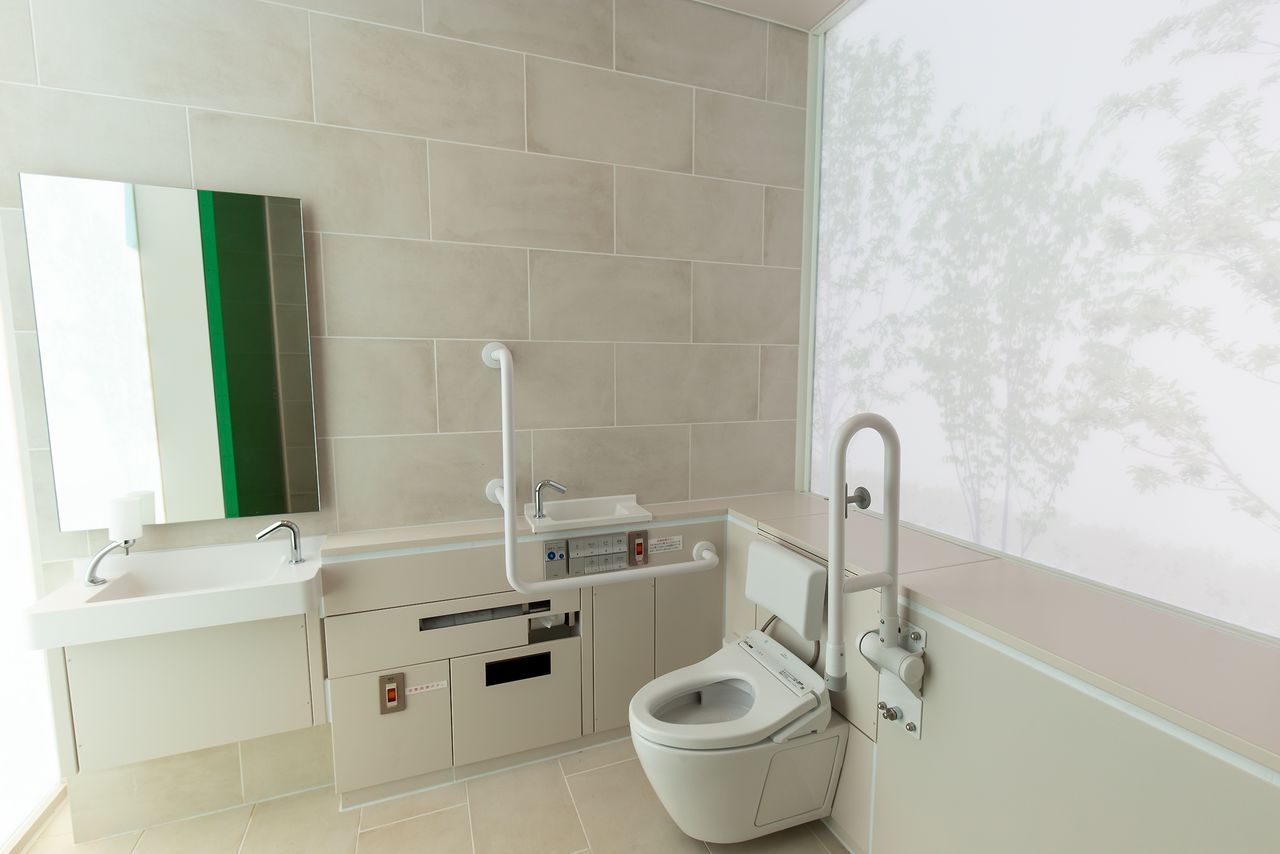 Andō, one of Japan’s most renowned architects, named the public restroom he designed at Jingū-dōri Park Amayadori, meaning “rain shelter” in Japanese. Facing Meiji-dōri, a road stretching between the bustling centers of Shibuya and Shinjuku, the toilet features a broad roof jutting out like the visor of a hat, offering pedestrians refuge from sudden, inclement weather. Inside, a circular passageway provides privacy while allowing air to circulate through the structure. 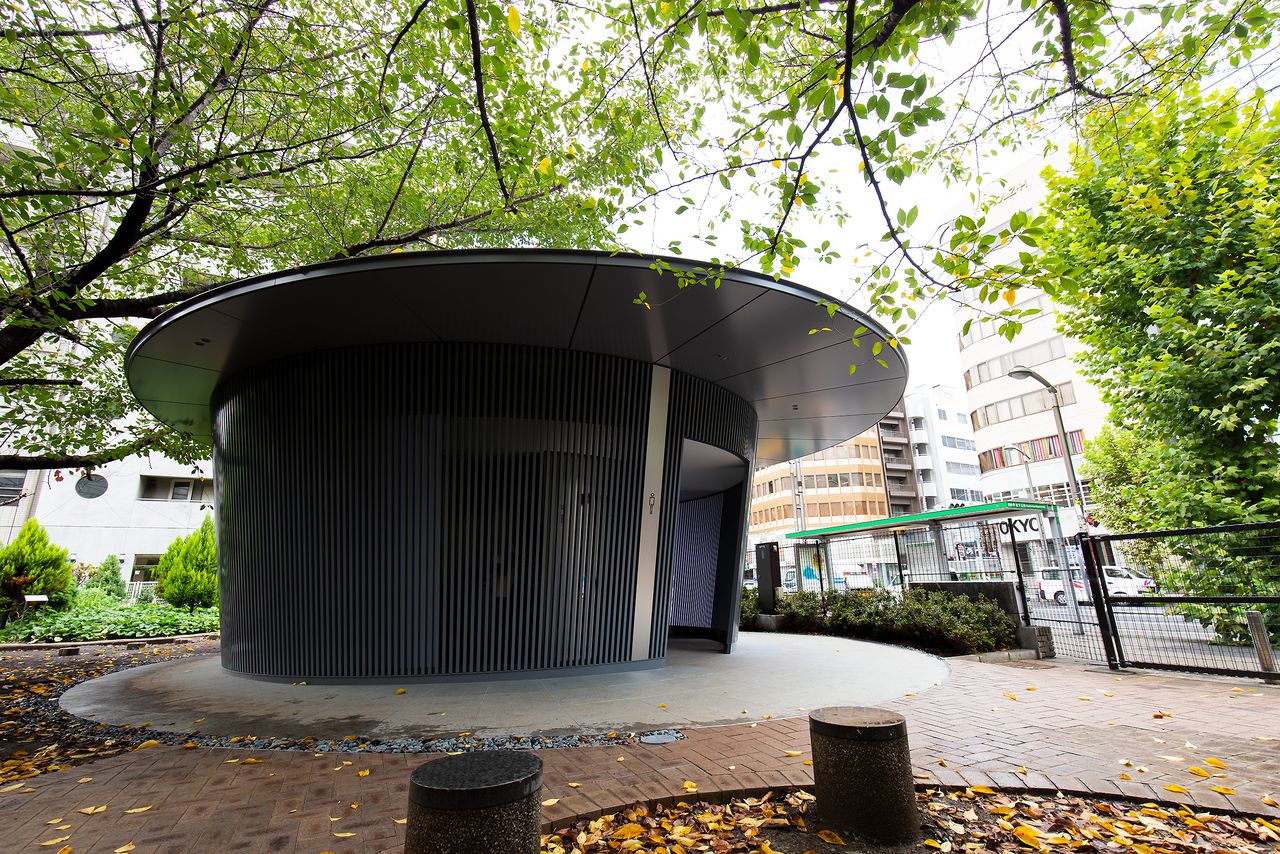 The surrounding green space adds to the inviting atmosphere. 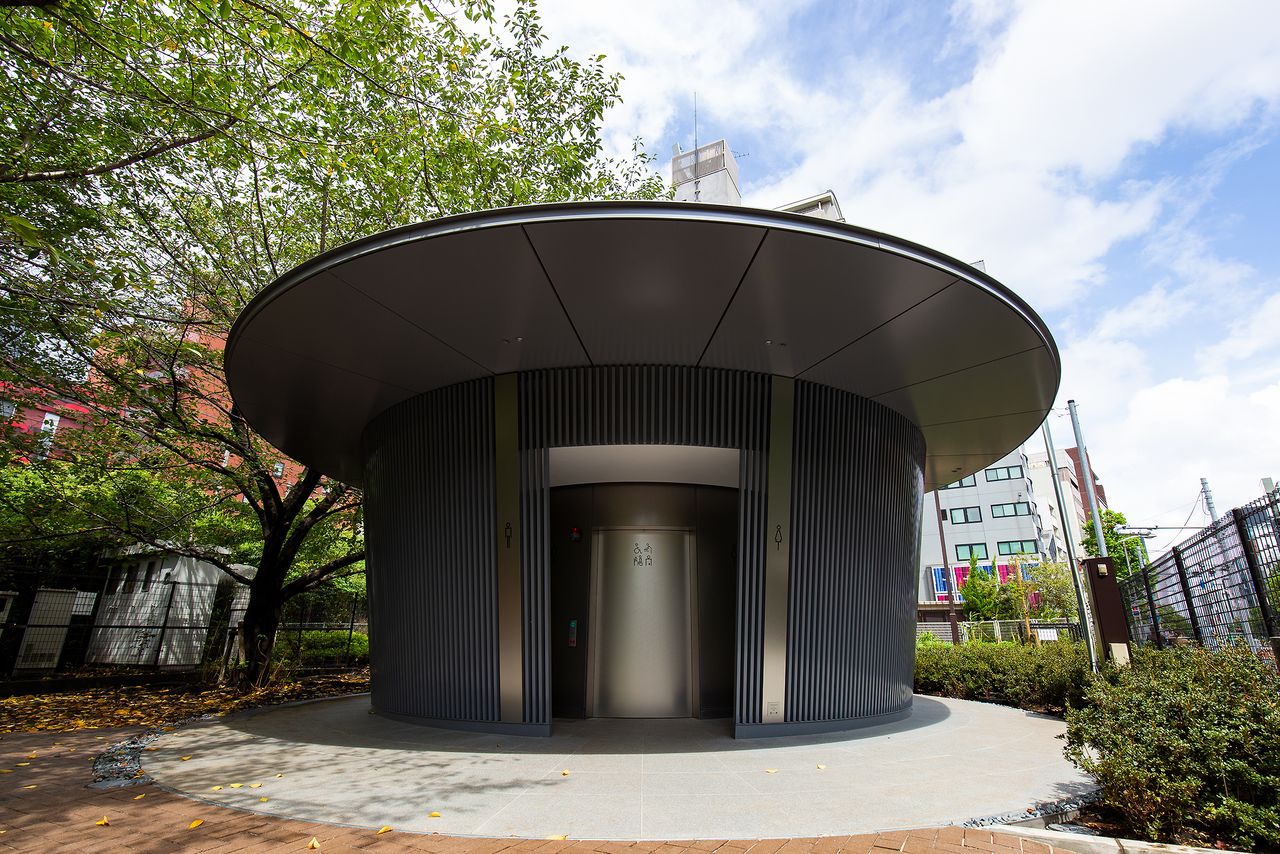 The broad disk of the roof protects the front entrance facing Shibuya Station from the elements. 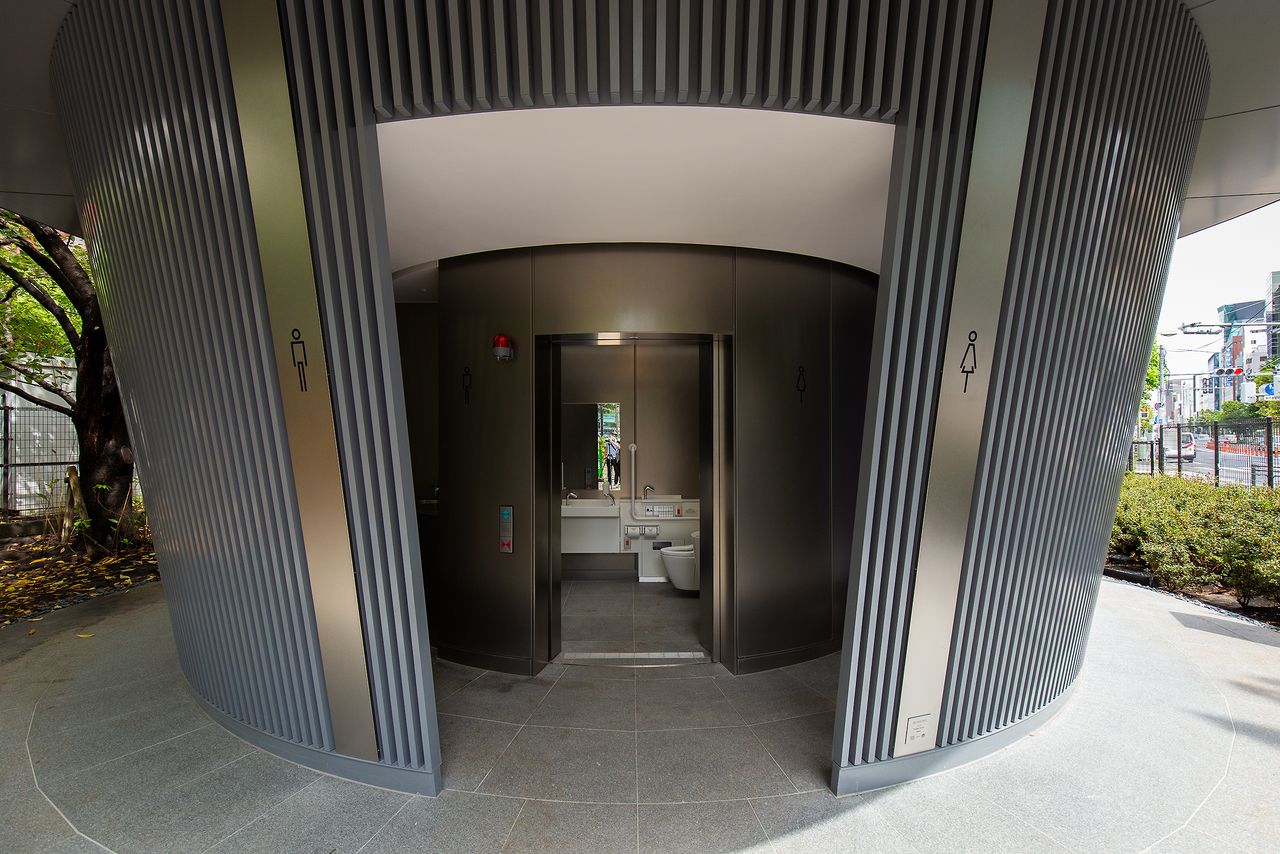 A fully accessible toilet is located in the middle of the structure, with the men’s and women’s areas on either side. 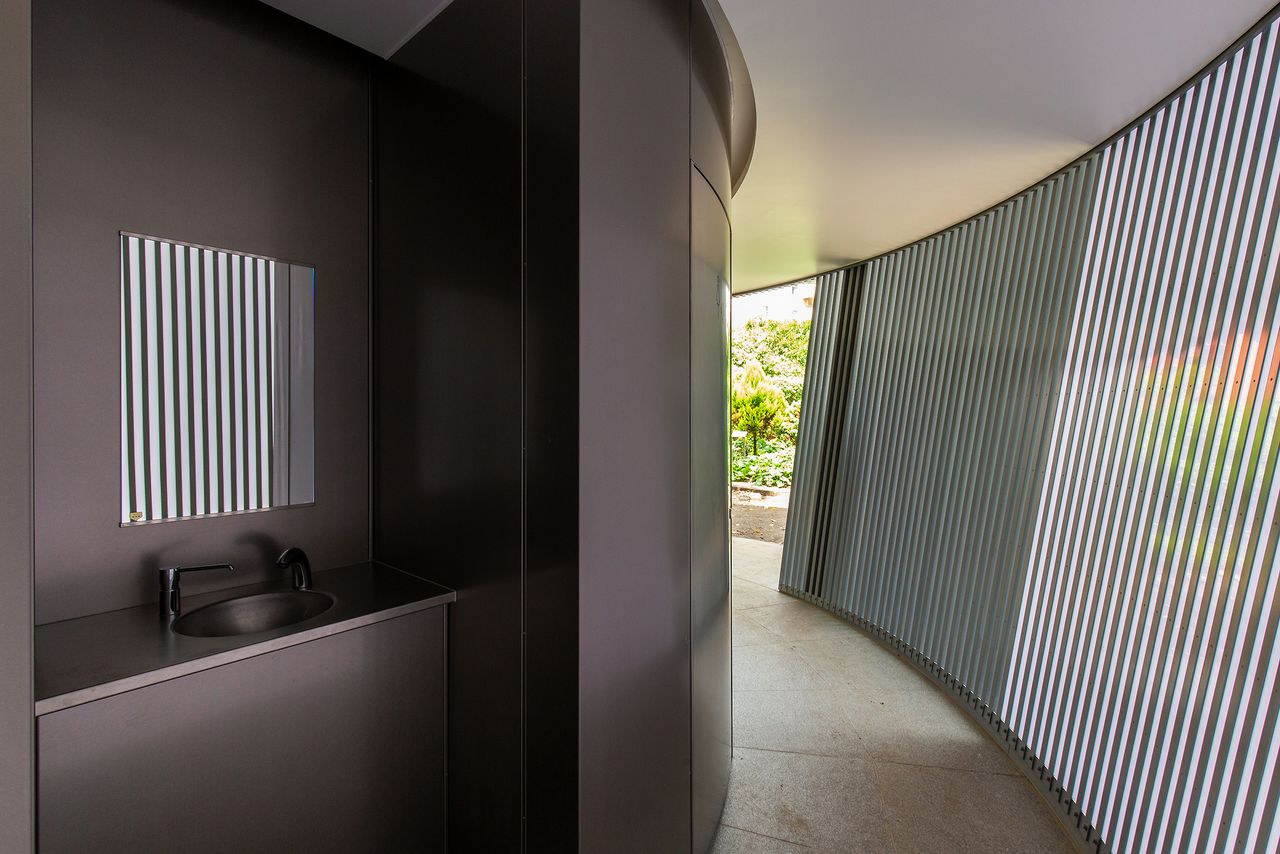 Slits in the outer wall allow in natural light. A sink is conveniently located along the passageway. 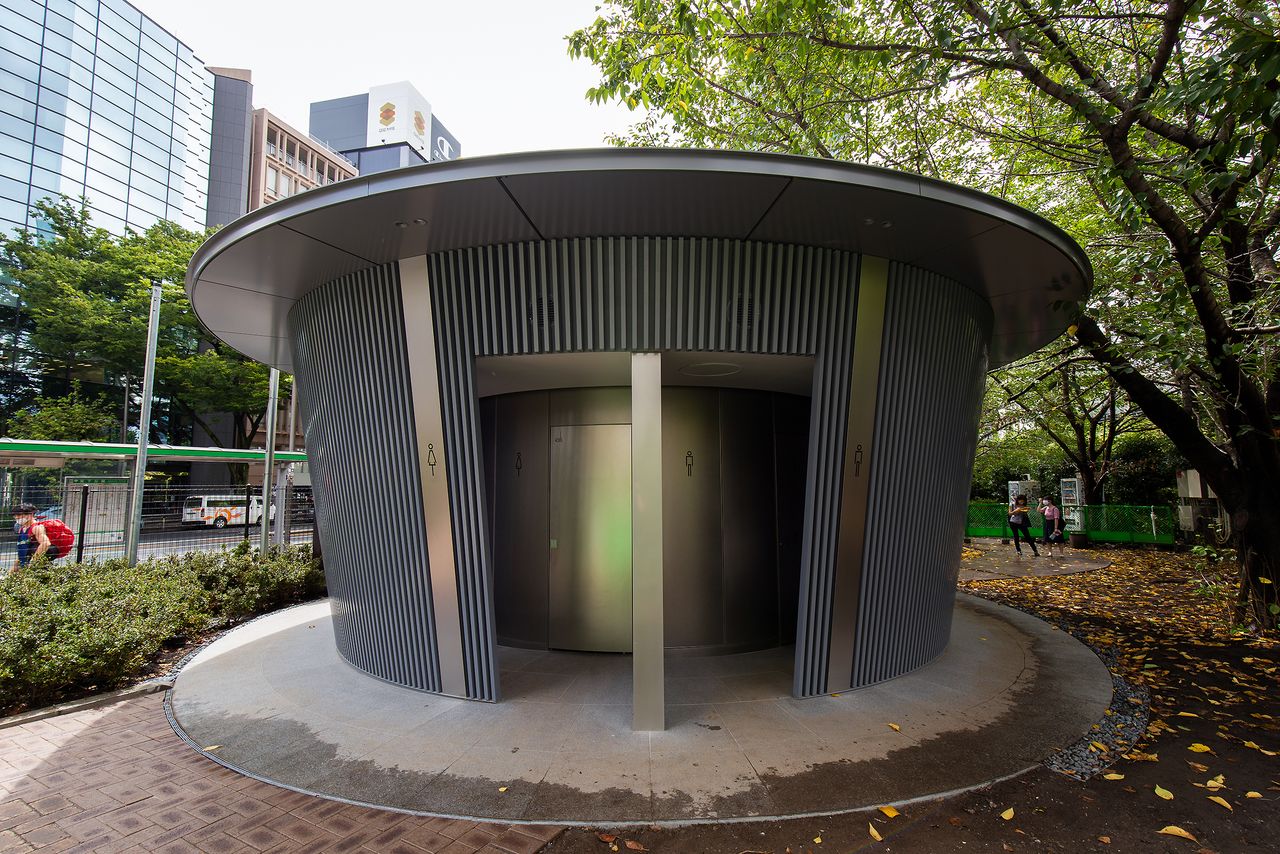 The structure has a second entrance facing Harajuku Station.