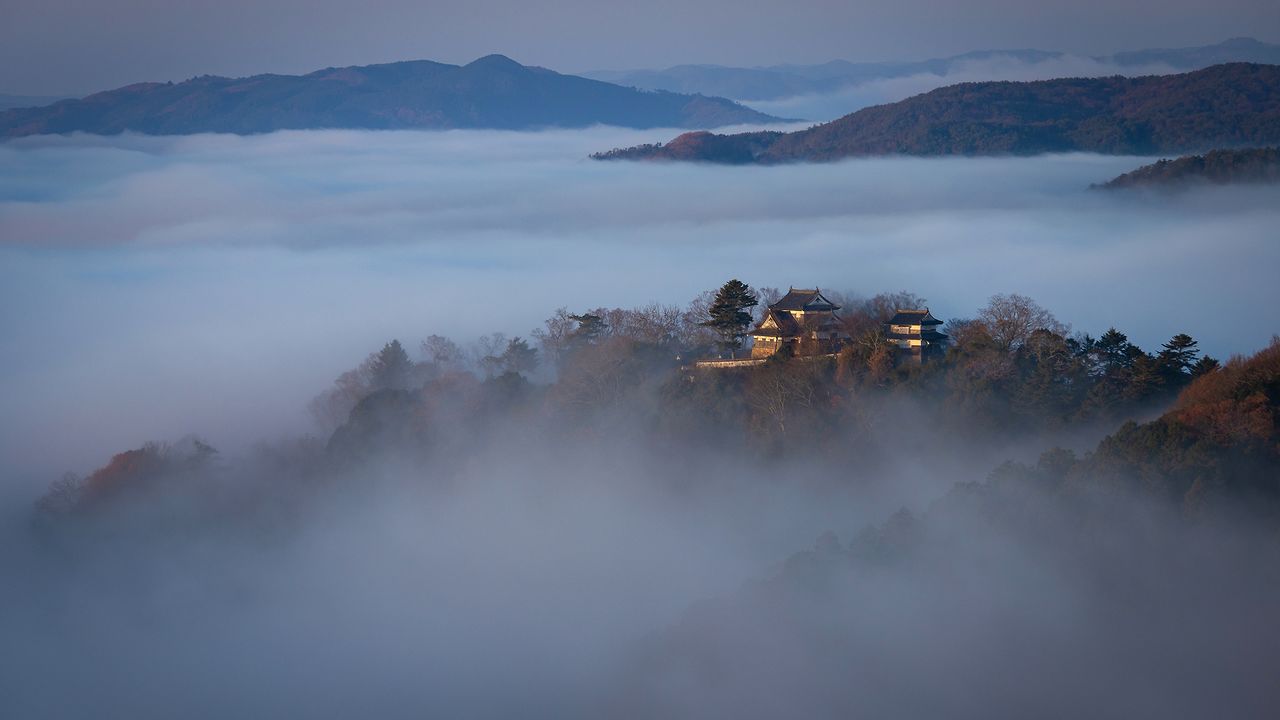 Bitchū Matsuyama Castle: A Once-Forgotten Mountain Keep Made Popular Again by a Cat

History Travel Apr 28, 2021
Enveloped in a sea of clouds, Bitchū Matsuyama Castle, located in Takahashi, Okayama Prefecture, still retains its original castle keep and its pre-Edo appearance. Its “Cat Castle Lord” Sanjūrō has become popular in recent years, but it was once a ruin, almost totally forgotten even by locals.

Bitchū Matsuyama Castle stands on top of a 430-meter high mountain in Takahashi, Okayama Prefecture. It is one of only 12 castles nationwide to retain its original keep, and the only one of these on a hilltop. The promontory’s valley location, with the Takahashi River, flowing at its base, to the west, means that early in the mornings from autumn through spring the fog rises, creating a landscape with the castle seemingly floating on a sea of clouds. 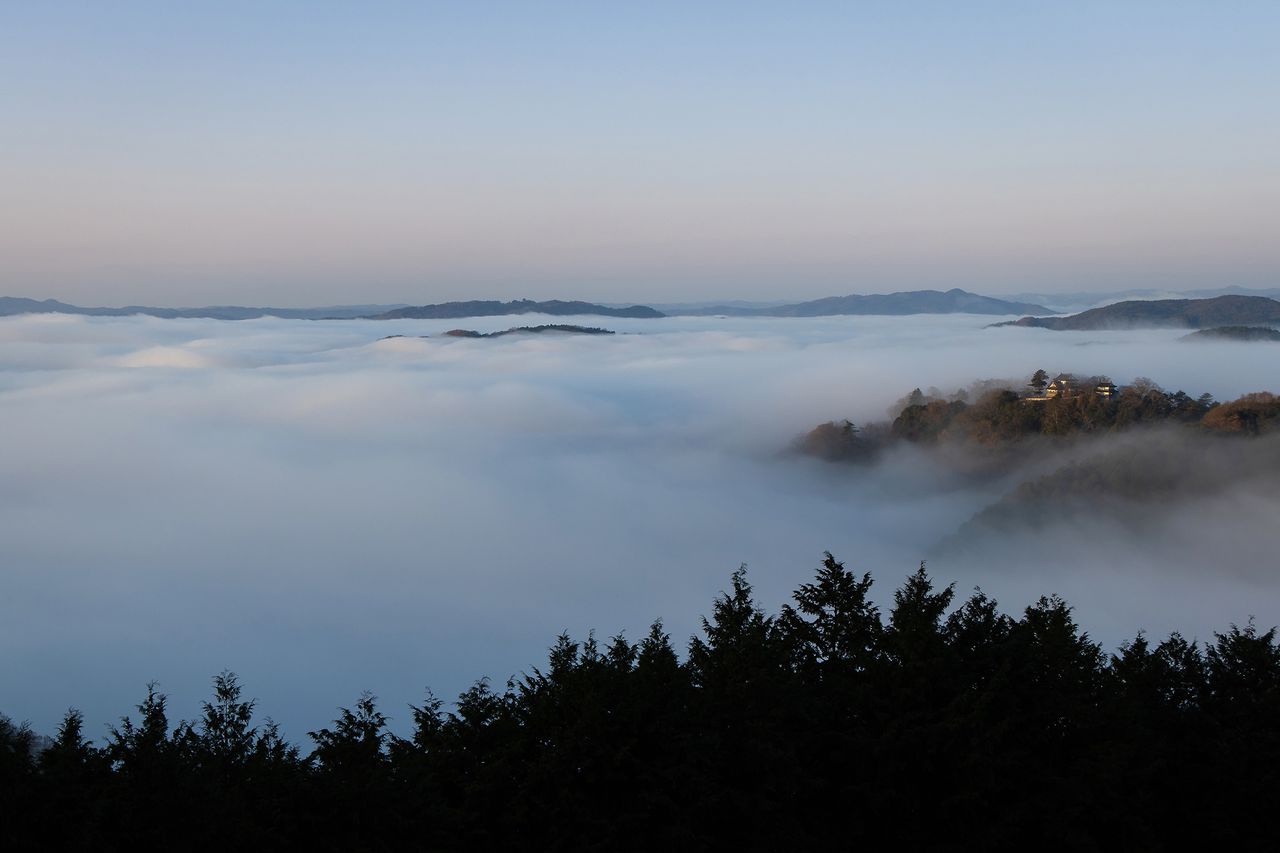 The town of Takahashi enveloped in clouds and Bitchū Matsuyama Castle floating above, photographed from the nearby observation point. 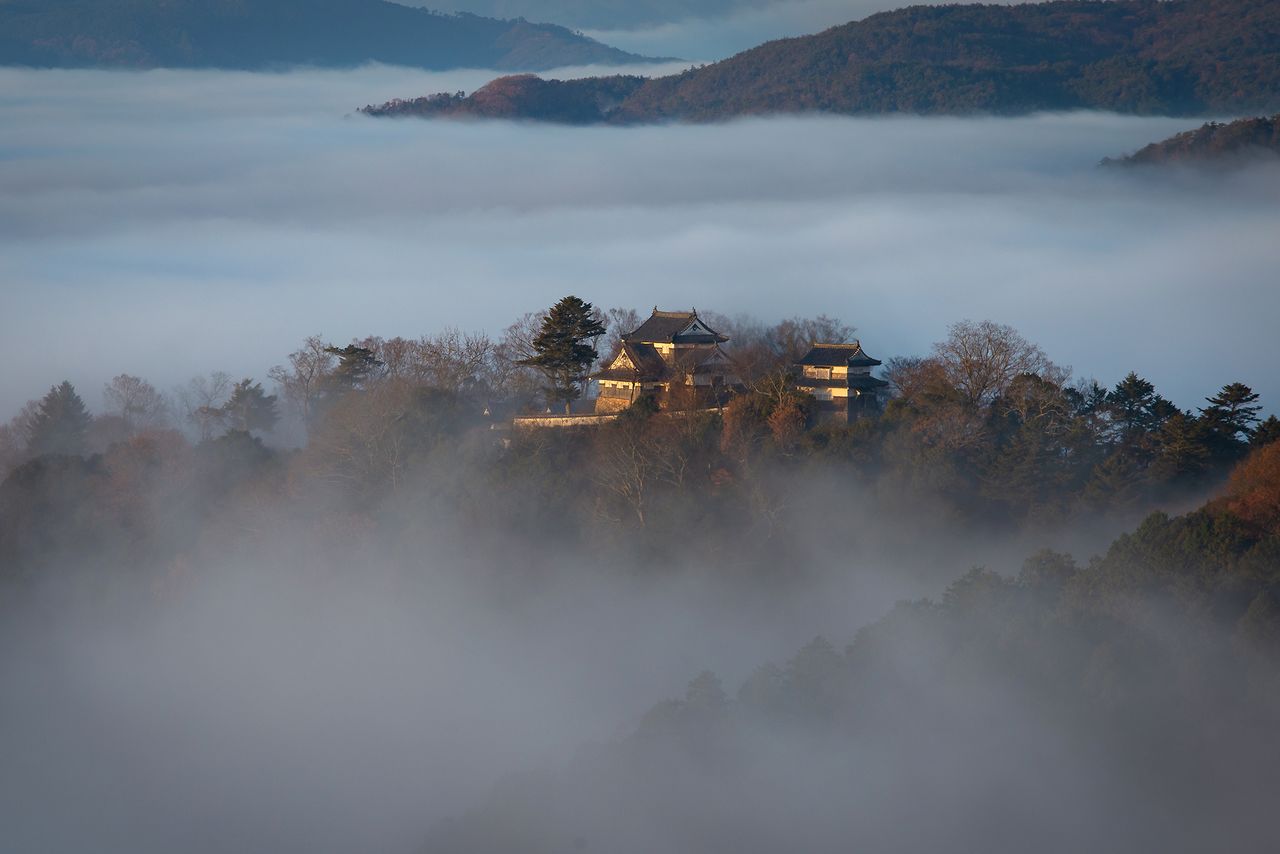 It is an inspiration to think that this magical view has not changed since the Edo period.

Starting with Takeda Castle in Hyōgo, known as the “Machu Picchu of Japan,” along with Echizen Ōno Castle in Fukui Prefecture, and Tsuwano Castle in Shimane Prefecture, there has been something of an infatuation in recent years around the notion of “castles in the sky.” Many castles, like Takeda, lie in ruins, making Bitchū Matsuyama an exception, with its intact keep. It was featured in the opening credits of Sanada-maru, a major Japanese historical drama aired in 2016, making the unique mountain castles into a hot topic. 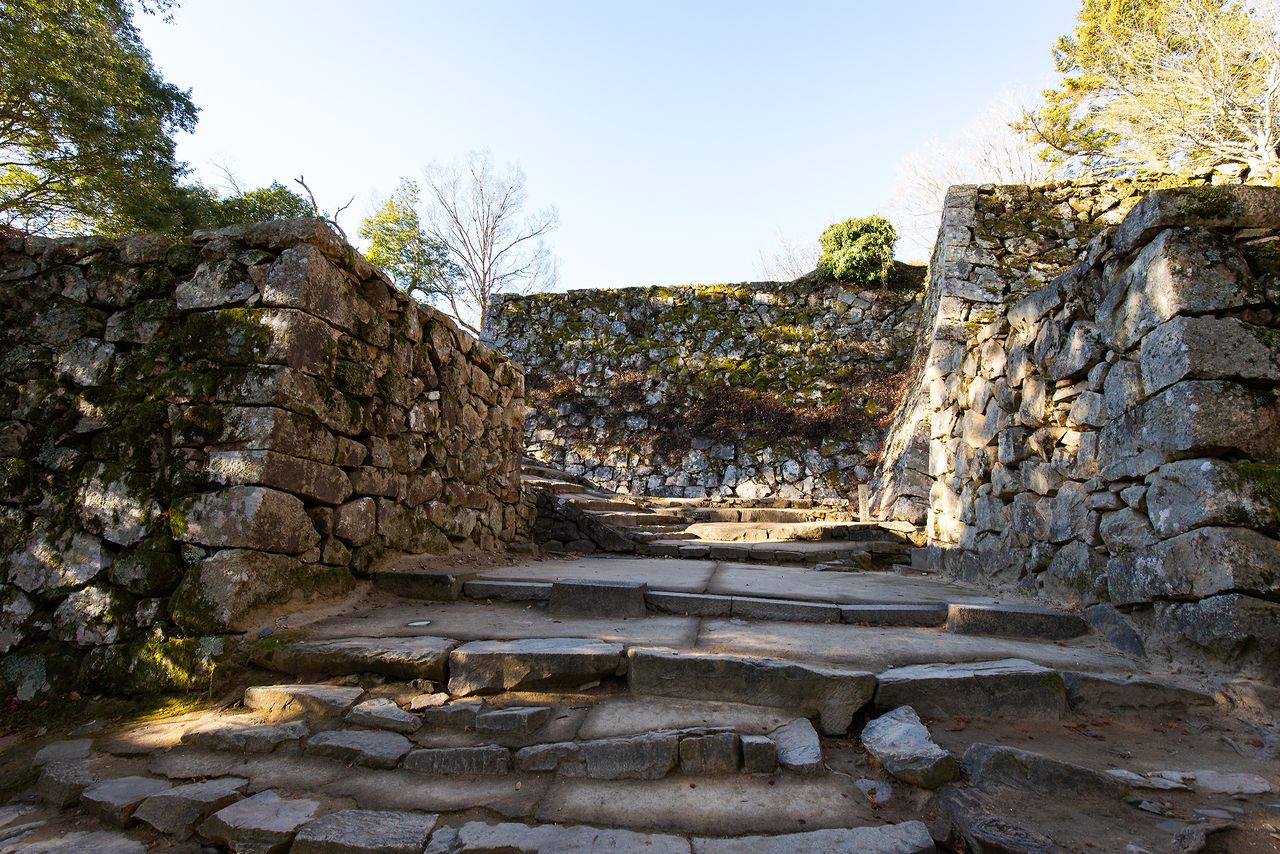 The ruins of the main gate, enhanced by computer graphics, were used in the opening of Sanada-maru. The stone steps wind around, to prevent the enemy from attacking the castle head on.

Bitchū Matsuyama Castle sits atop Mount Komatsu, one of the four peaks in the Gagyū range. Its origins lie in the Akiba Clan having built a fort during the Kamakura period (1185–1333) on the northernmost peak, Mount Ōmatsu (470 meters). Mimura Motochika, a warlord during the feudal wars, made it into a fortress straddling three of the peaks. The current castle keep was completed in 1683, when the head of the Bitchū Matsuyama domain, Mizunoya Katsutaka, restored it over a three-year period. 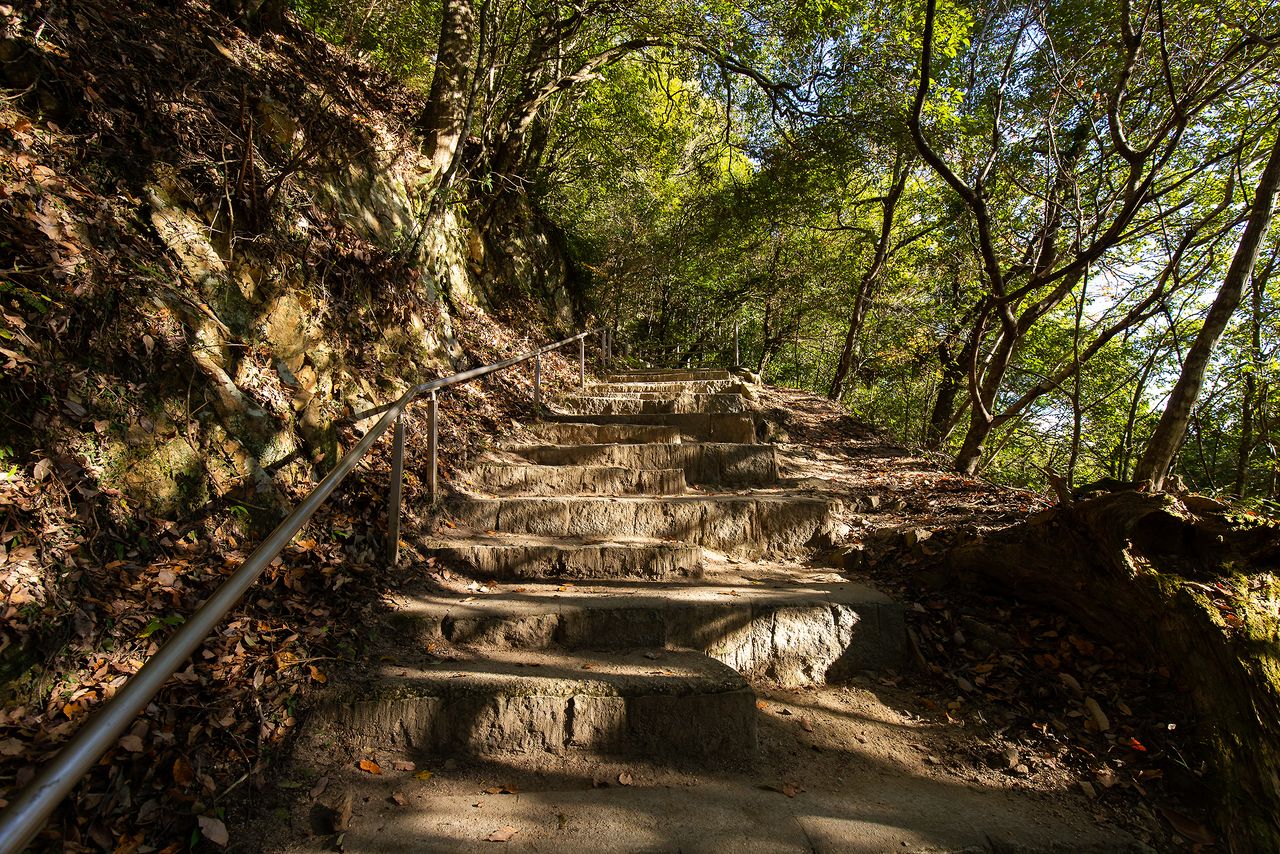 Climbing even the modern hiking trail is hard work. It takes about 20 minutes to hike the 700 meters from the Fuigo Pass car park, located partway up the Gagyū range slopes. 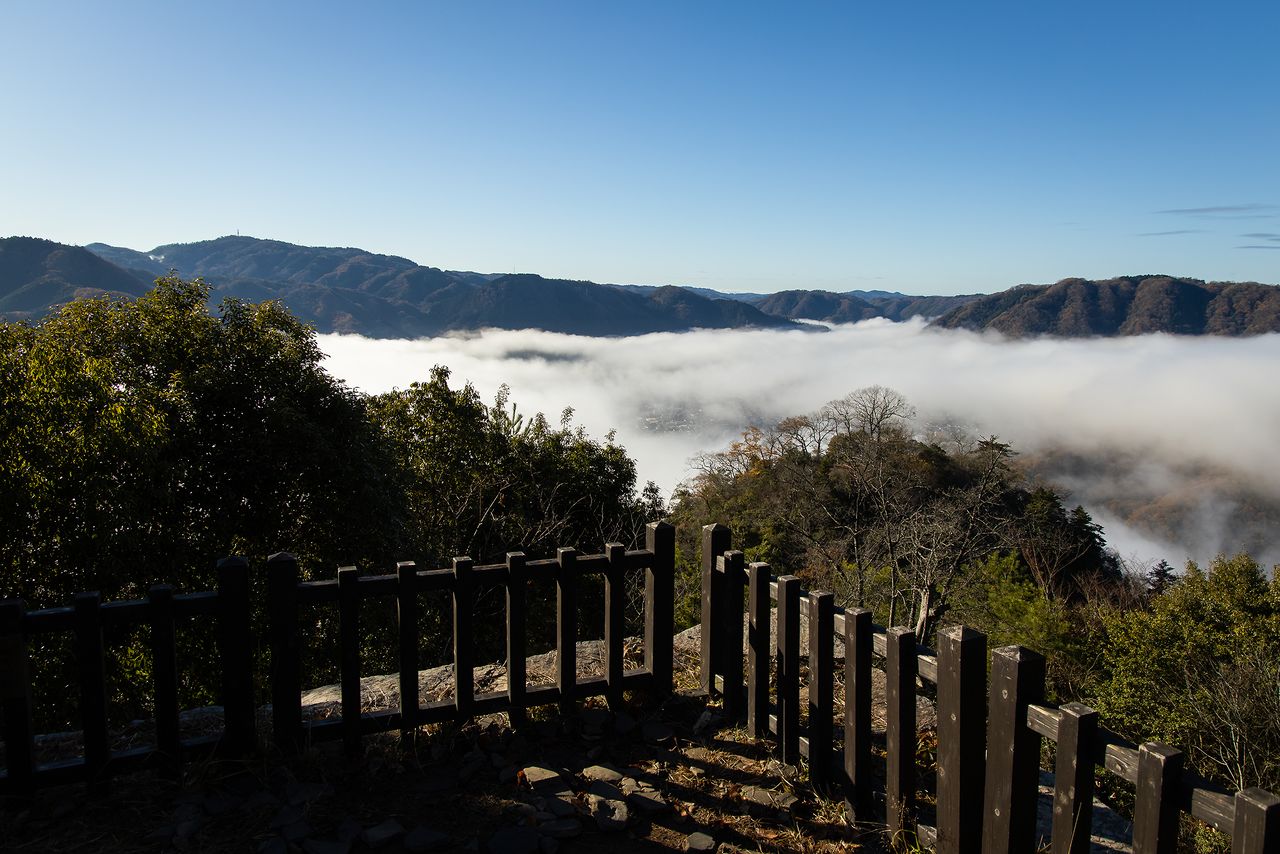 It takes about an hour to walk up the steep, 1.5-kilometer mountain path from the castle town at the foot of the mountain to the main gate. The ruins of two turrets lie along the way, and it is thought that drums (taiko) were used to pass information between the town and the mountain castle. Around the main gate, stone walls over 10 meters high rise up from the rock face. Narrow loopholes were set in the mud walls for shooting arrows or firing guns. The stone steps leading to the ruins of the third and second enclosures (ninomaru and sannomaru) wind around several times in order to slow down the advance of an enemy. The main keep, protected by the turrets and enclosures, gives the illusion at first sight of being on three levels, but is in fact a two-floor structure with two structural levels. The word “impregnable” seems absolutely fitting for this famous castle. 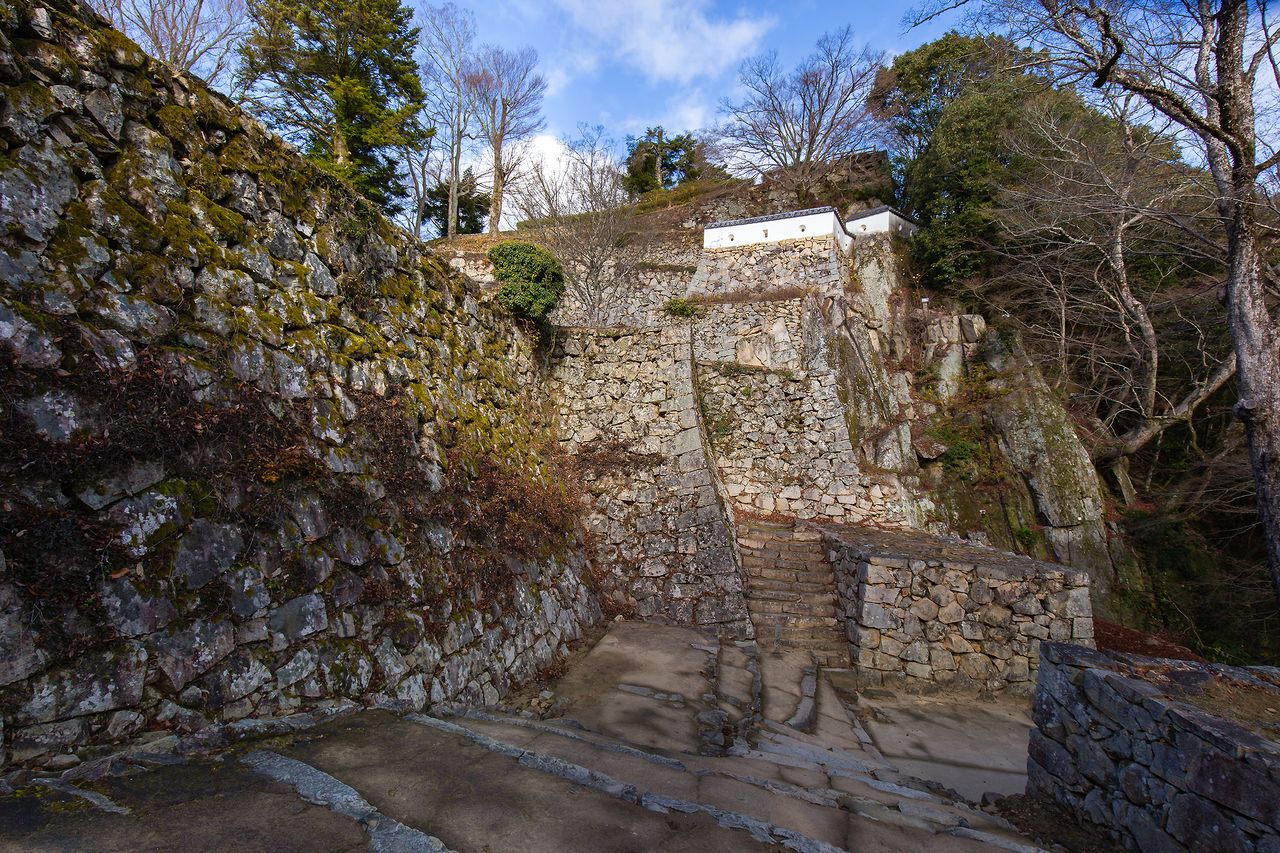 The secure stone wall around the remains of the main gate incorporates the natural rock face. 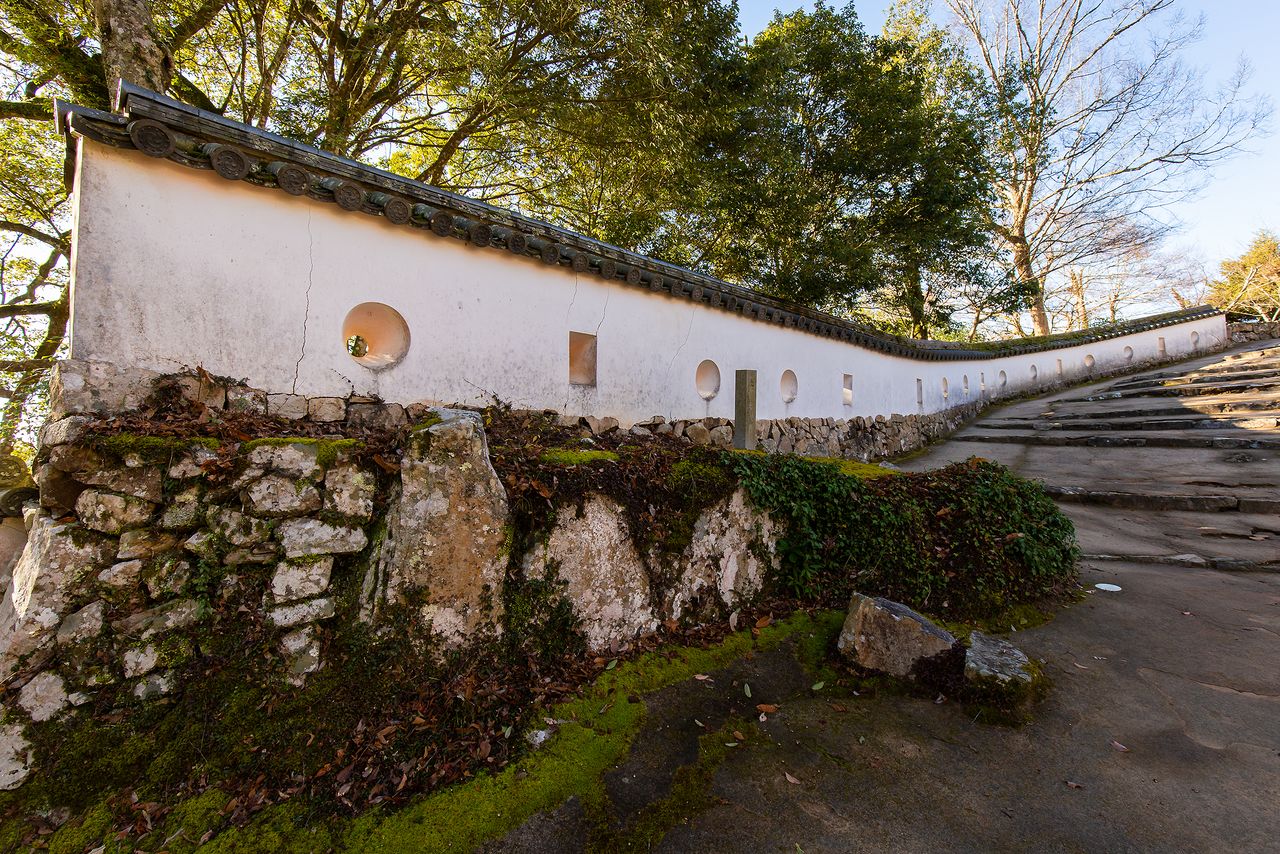 The San no Hira Yagura, the eastern mud wall of the third single turret, is designated a national important cultural property. The horizontal portion at the front dates from the Edo period, and was extended along the stone steps during the restoration.

With the extinction of the Mizunoya clan in 1693, the castle was for a time in the hands of Asano Naganori, the lord of the Akō domain of Harima Province, famed in the story Chūshingura (The Treasury of Loyal Retainers). His chamberlain, Ōishi Kuranosuke, oversaw the castle for a year. Following this, ownership of the castle passed to the Andō Clan and the Ishikawa Clan. From 1744, to the end of the shogunate, it was held for eight generations by the Itakura clan. 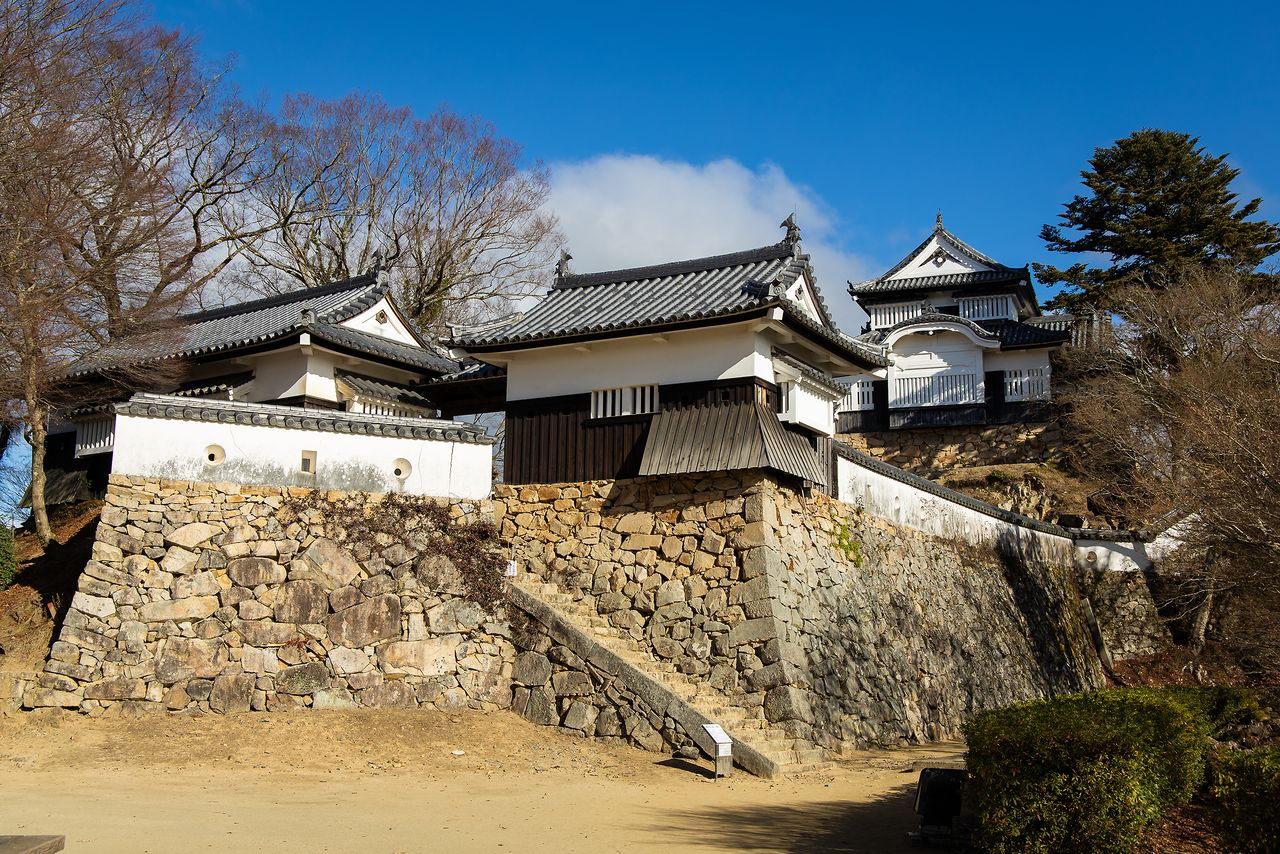 The main keep, seen from the ninomaru second enclosure. The fifth turret (middle) and sixth turret (left) in front of the keep were restored in 1997.

Students Carrying Roof Tiles and Helping with the Restoration Work

With the Meiji Restoration of 1868, all castles were placed under the jurisdiction of the Department of the Army, and an ordinance for the disposal of castles was passed in 1873. With the exception of castles in major cities that could be used as military facilities, they were to be sold off for use by municipalities or schools. Bitchū Matsuyama Castle was abandoned but, as an impregnable mountain keep, it differed from other castles accompanied by considerable land holdings in the center of their towns. It would even be too costly to dismantle it and bring down the materials to be used for construction. It was therefore left as was, gradually going to ruin.

The revival of Bitchū Matsuyama Castle, after it had been forgotten for about 60 years, was due to the enthusiasm of a middle school teacher. In the early years of the Showa era (1926–89), Shinano Tomoharu was transferred as a history teacher to Okayama Prefectural Takahashi Junior High School, and was horrified when he visited what had once been a famed mountain castle. Many of the turrets lay in ruins, and monkeys were living inside the keep, which appeared on the brink of collapse. 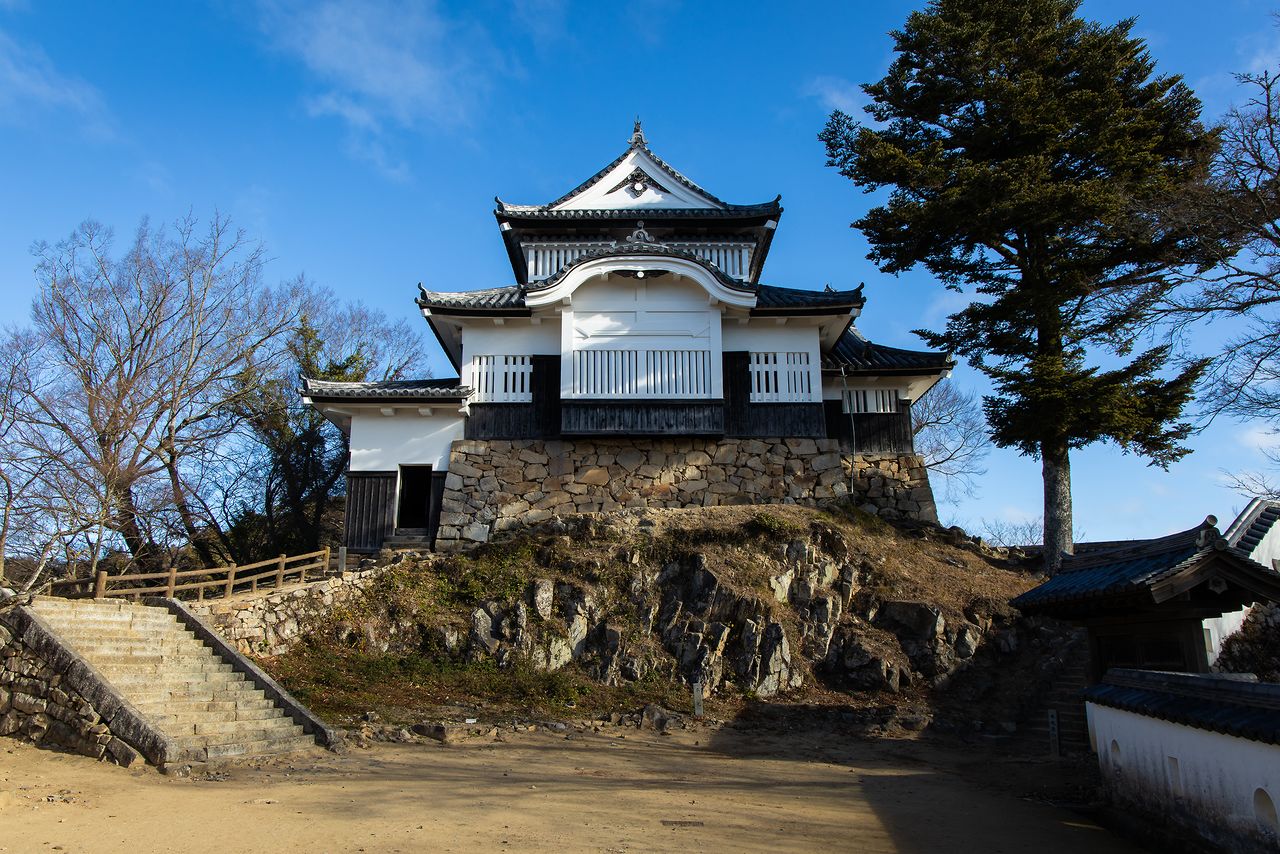 The proud keep (a national important cultural property) built atop a rocky peak. It is unbelievable that it came close to collapsing. 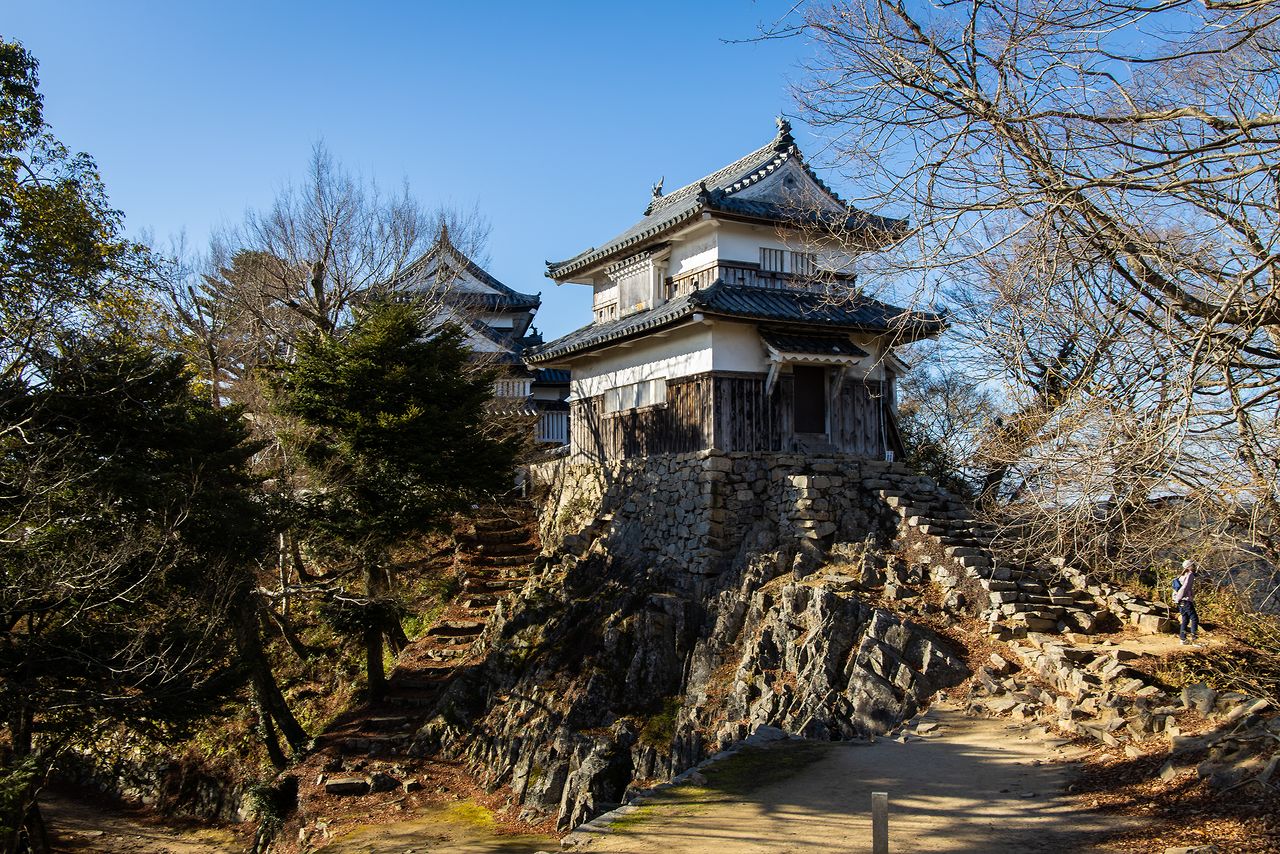 The two-level turret, standing behind the main keep, is also a national important cultural property. Walking north along the path, one can go as far as the observation point at the ruins of Tenjin no Maru atop the highest peak in the Gagyū range (culminating at 480 meters), via the ruins of Ōmatsuyama Castle.

Appreciating its historical importance, Shinano threw himself into the Bitchū Matsuyama project, starting with keeping records. He climbed the mountain countless times with his son and friends, getting them to help with taking measurements, and creating his own plan, with detailed records of the structure of the keep and measurements. In 1930, he published Bitchū Matsuyamajō oyobi sono jōka (Bitchū Matsuyama Castle and its Castle Town). Thanks to the book, the product of Shinano’s enthusiasm and efforts, the people there came to realize that they had a “local treasure” sleeping on top of the mountain. This led to the foundation of the Takahashi Preservation Society for the restoration of the castle. A budget was set aside by the town of Takahashi in 1939, and the decision was made to start the disassembly and repair of the keep and restoration of the mud walls.

However, plagued by insufficient funds and the difficulty in getting materials up to the mountain castle, progress was slow. The biggest sticking point was carrying up 20,000 roof tiles. It was the local children who took this on. During their summer holiday, students from elementary to senior high school would trek up the steep mountain path, carrying roof tiles on their backs. One man’s enthusiasm fired up an entire town, and in 1940, the magnificent restoration of Bitchū Matsuyama Castle was complete. Following that, it also underwent two bouts of major repairs, ending in 1960 and 2002. 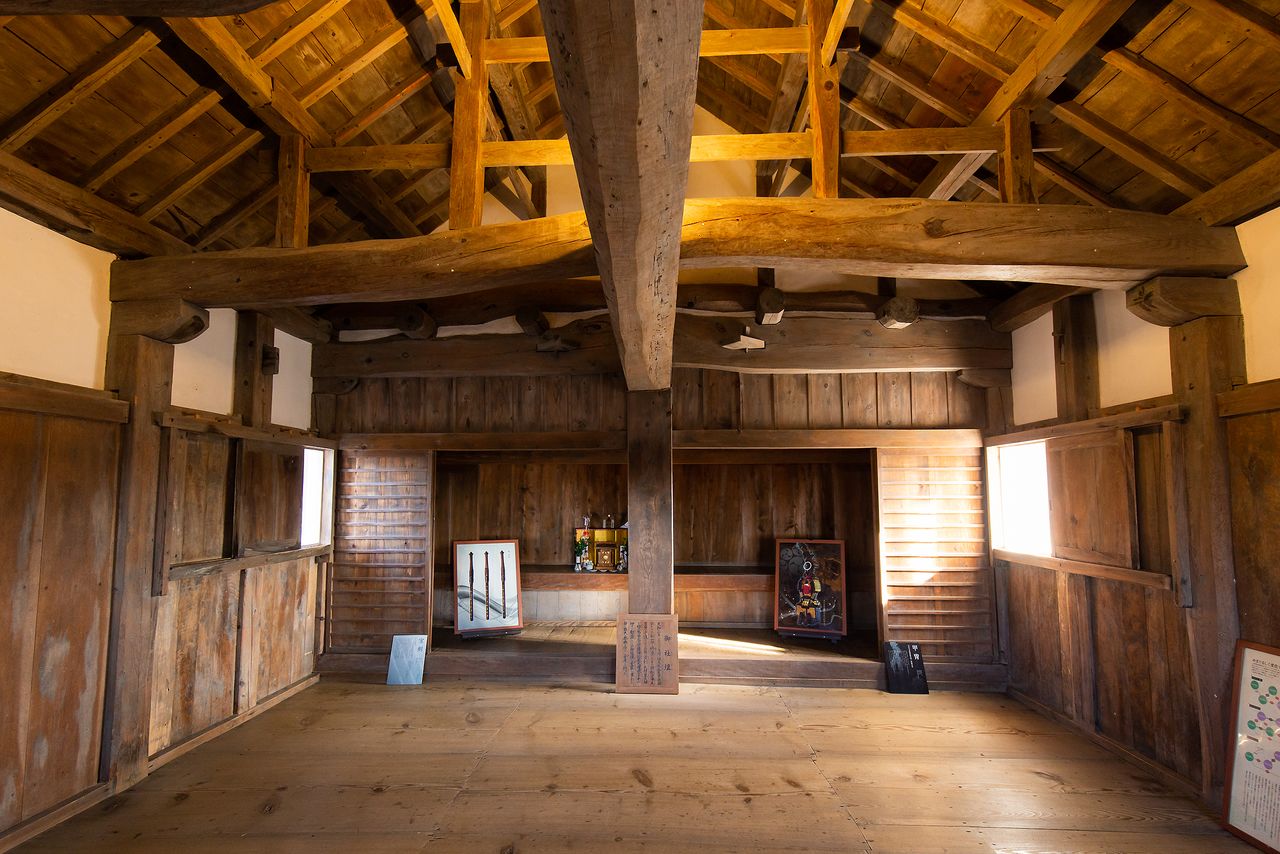 The inside of the keep is an exhibition space. The goshadan household Shintō altar is at the back of the second floor, and the location of the hearth on the first floor is unusual. 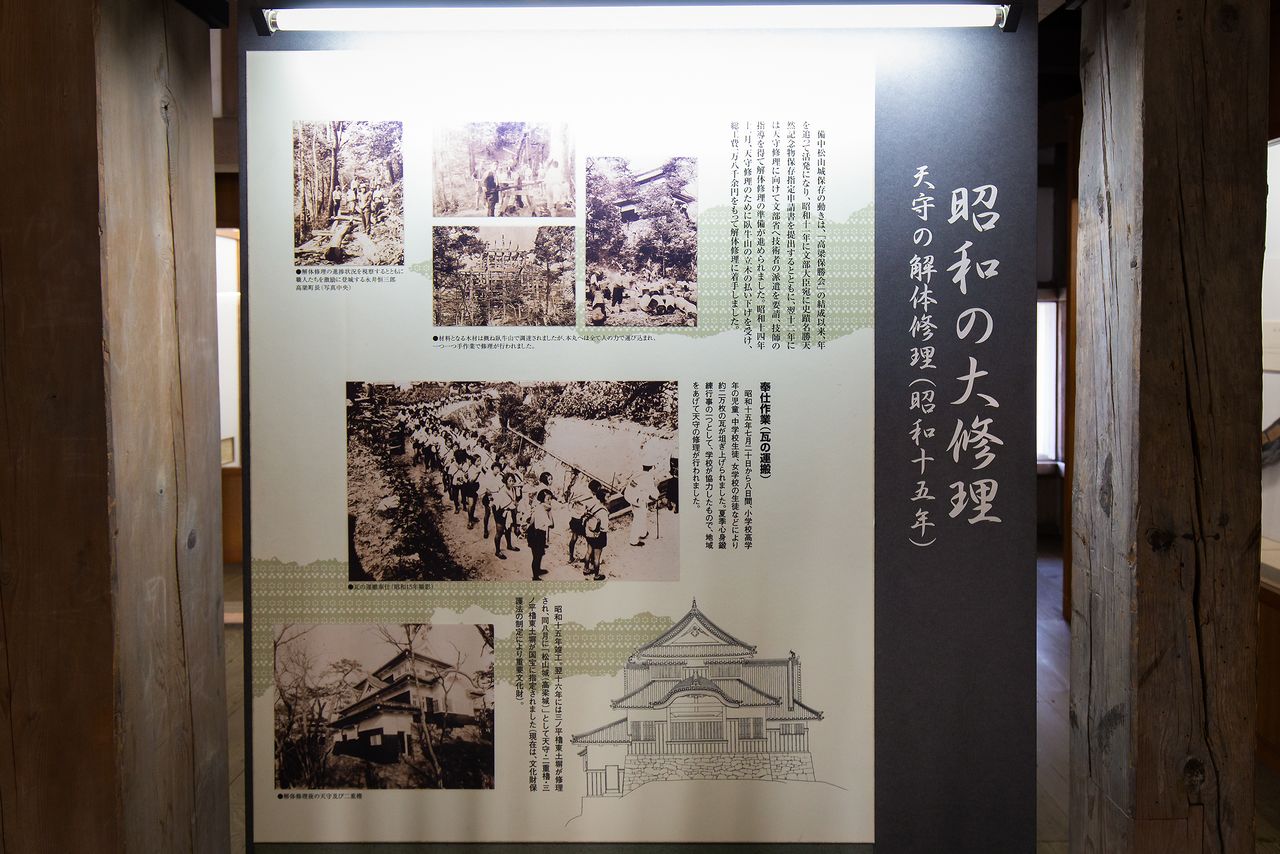 Rare photos from the time of the restoration show scenes including girl students carrying roof tiles on their backs.

The Appearance of the Cat Lord of the Castle

Bitchū Matsuyama Castle has become Takahashi’s prime tourist destination, a true local treasure. Recent years in particular have seen a boom in “Castles in the Air,” and its appearance in a TV series also helped enhance its profile. Even so, the number of visitors had been stagnating for a while. The severe rainstorms that caused terrible damage in western Japan in July 2018 also hit Takahashi severely, with landslides as well as flood damage caused by the river overflowing its banks.

Help in these hard times arrived in the shape of a ginger and white stray cat. He started out by scrounging for his share of the custodian’s lunch box, and decided to make the castle his home after the terrible rainstorms. In December, the Takahashi City Tourism Association designated him “Lord of the Castle.” He was first discovered in the vicinity of the third enclosure (San no Maru), and in honor of Tani Sanjūrō, the famed head of the seventh unit of the Shinsengumi shogunate police, who was from the Matsuyama clan in Bitchū, he was named Sanjūrō, Cat Lord of the Castle. Far from disliking it when visitors pet him, he purrs loudly, and is totally unfazed by film crews and paparazzi, nonchalantly walking around the castle like a true lord. Thanks to Sanjūrō’s popularity with cat lovers, the number of visitors is now greater than before the storm damage. 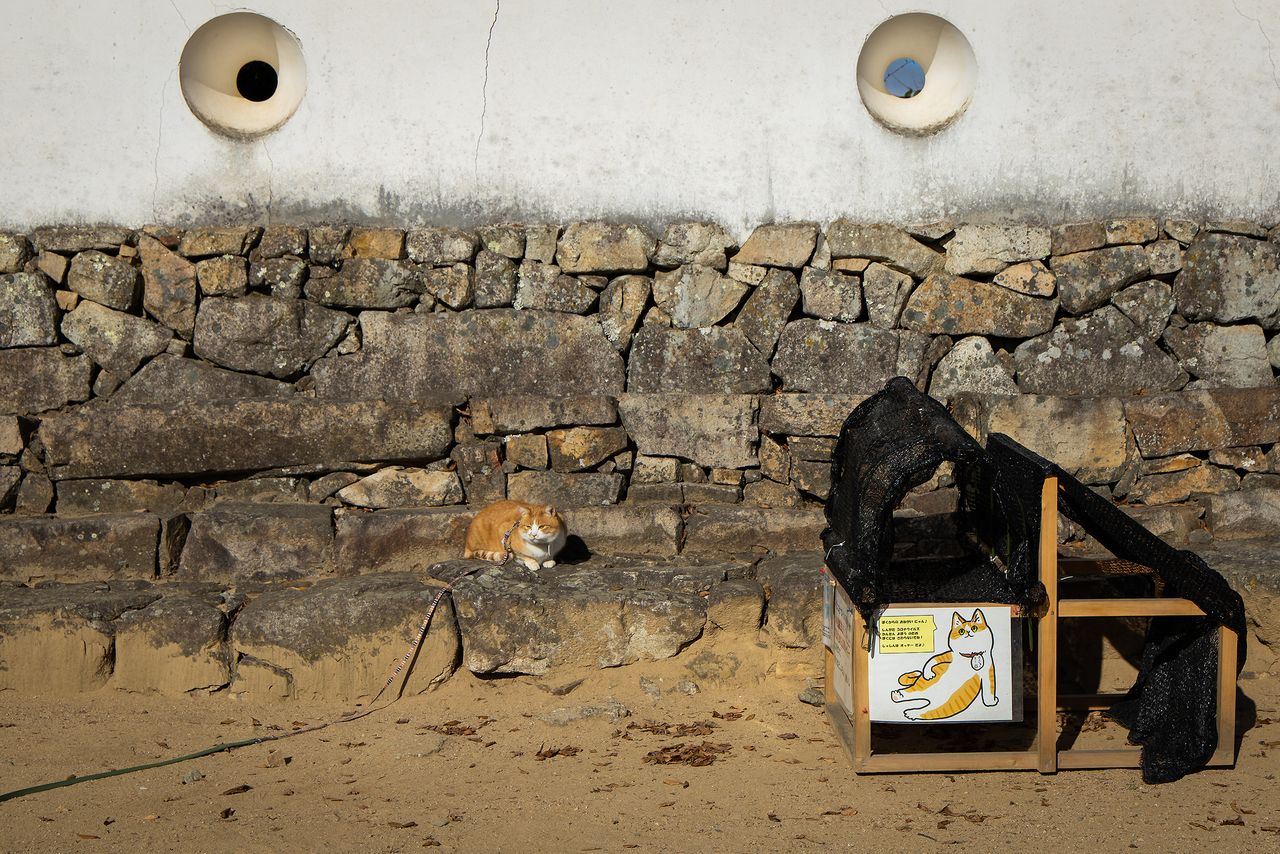 Sanjūrō relaxing along the stone wall. Due to the current COVID-19 situation, it is forbidden to pet him for the moment. 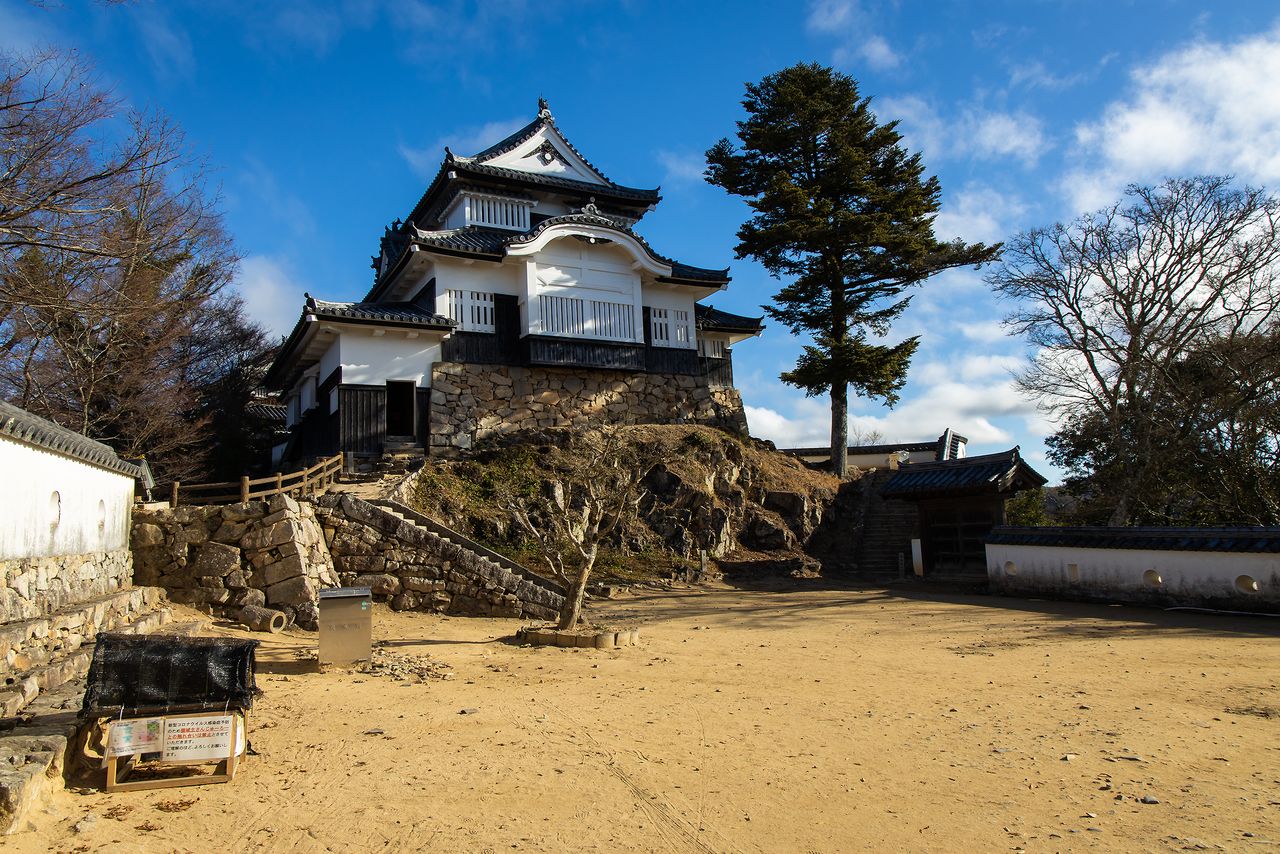 Sanjūrō has his own quarters just in front of the castle keep.

The mountain castle once called impregnable, but allowed to fall into disrepair for many years, came back to life thanks to the enthusiasm of a teacher, and has become a friendly place thanks to the appearance of the Cat Lord. Perhaps because he is saddened by the reduction of visitors due to the COVID-19 pandemic, it seems that Sanjūrō has become more demanding of cuddles from his vassal (the custodian). We hope that once the COVID-19 has abated, you will visit Bitchū Matsuyama Castle to admire its period keep, and to pay your respects to its feline lord. 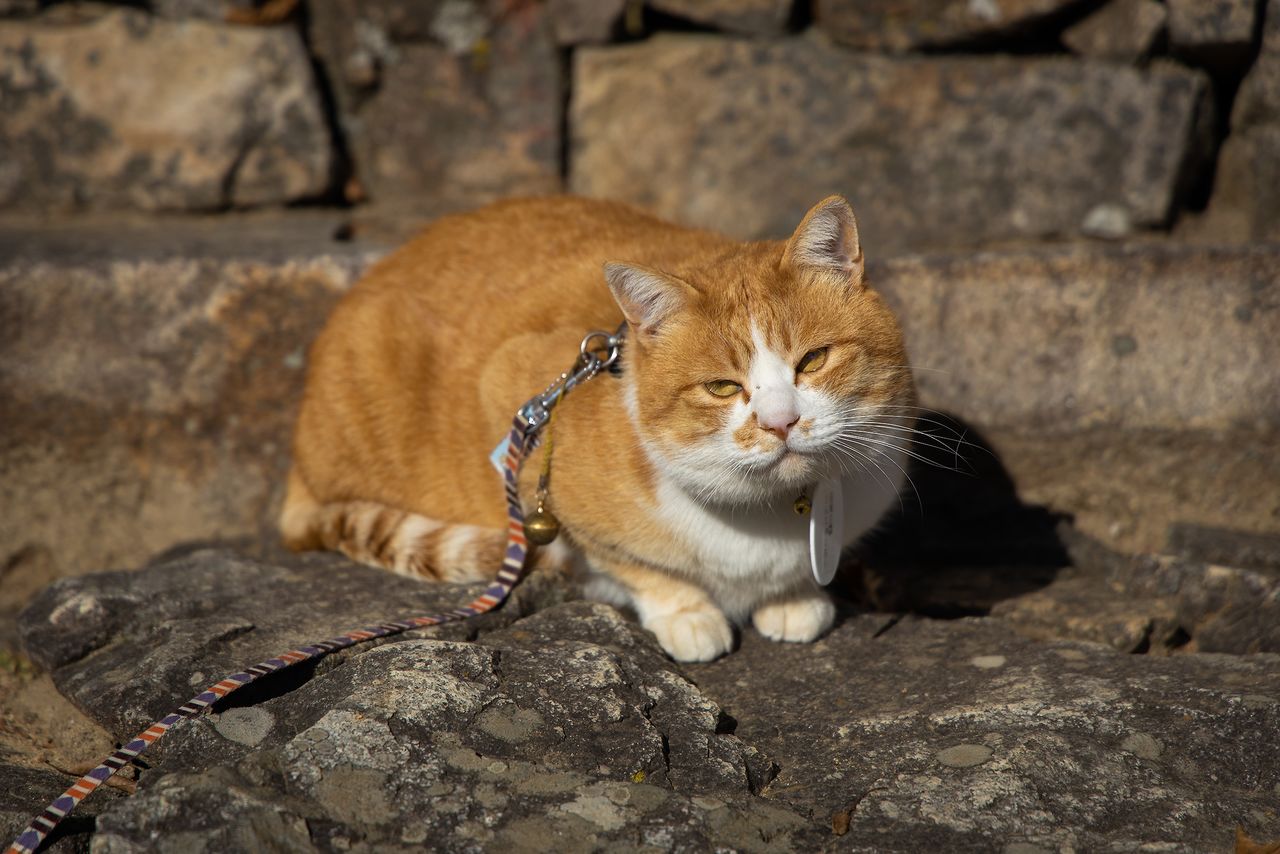 With a plethora of goods based on him, and even books published about him, Sanjūrō has become the driving force of all of the PR for the city of Takahashi. The municipal authorities even offer 50-cc motorbike number plates bearing his image!