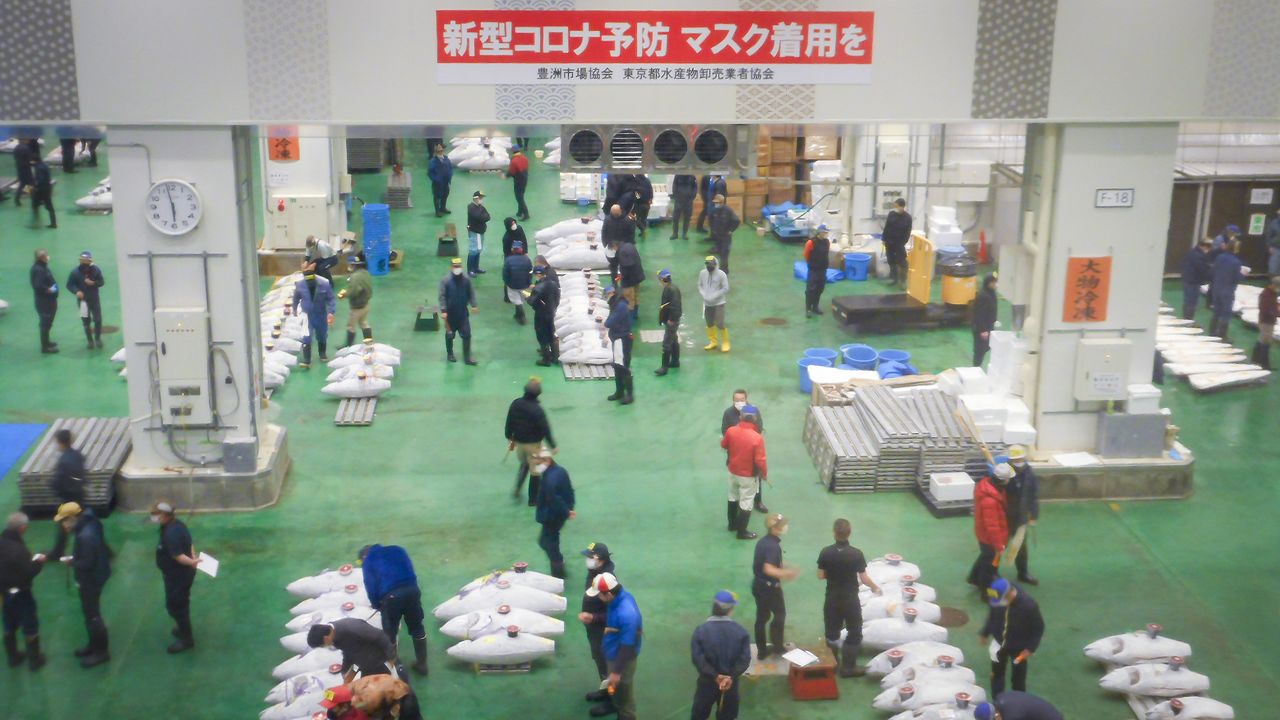 Economy Lifestyle Food and Drink Apr 2, 2021
The Toyosu fish market, nicknamed the “kitchen of Japan,” is struggling after a second government-imposed state of emergency caused many restaurants to close temporarily, giving the seafood arriving at the market nowhere to go. Meanwhile, Toyosu’s fish traders battle on, hoping for an end to the pandemic.

The relocation of the former Tsukiji market to the brand-new Toyosu facility was a mammoth undertaking for the Tokyo Metropolitan Government, and while brisk business was envisaged, the volume of produce handled by the market has continued to decline. 30 years ago, nearly 800,000 metric tons of seafood passed through Tsukiji each year, but by 2019 that figure had more than halved to around 350,000. In 2020, the volume fell still more, to just 330,000 tons. One cannot begin to imagine what a blow the COVID-19 pandemic has been to traders at a time when the market was already in decline.

The autumn 2020 spike in coronavirus infections hit market workers as well, giving rise to talk of a Toyosu cluster. While subsequent mass testing of market personnel has helped suppress the spread of the virus, Toyosu is a shell of its former self, with the popular tuna auction tours discontinued again in mid-December and many of the sushi restaurants in the market suspending operations in early 2021. Thanks to the determination and pride of those who work, however, as Tokyo officials declare that Japan’s biggest fish market must continue to operate no matter what, Toyosu has maintained its position as a cornerstone of commerce.

No Record Bids This Year

As 2021 kicked off under the cloud of COVID-19, the mood at the New Year tuna auction was subdued.

In 2019, the first tuna to be auctioned in the new year achieved a record price of ¥336 million. The nearly ¥200 million price achieved by the first tuna auctioned in 2020 also set the tone for a bullish New Year market. In both cases, it was Kimura Kiyoshi, head of the Sushi Zanmai restaurant chain, whose bid took the first tuna of the year. This year, however, Kimura did not participate in the auction due to coronavirus fears, and the first tuna of the year went to the wholesale fish distributor Yamayuki, which paid a mere ¥21 million for a Bluefin tuna caught at Ōma, Aomori. This equates to just ¥100,000 per kilogram, a far cry from the ¥1.2 million paid by Kimura in 2019. After the auction, Kimura said sadly, “We can’t spend big this year. We’ll be back next year.” 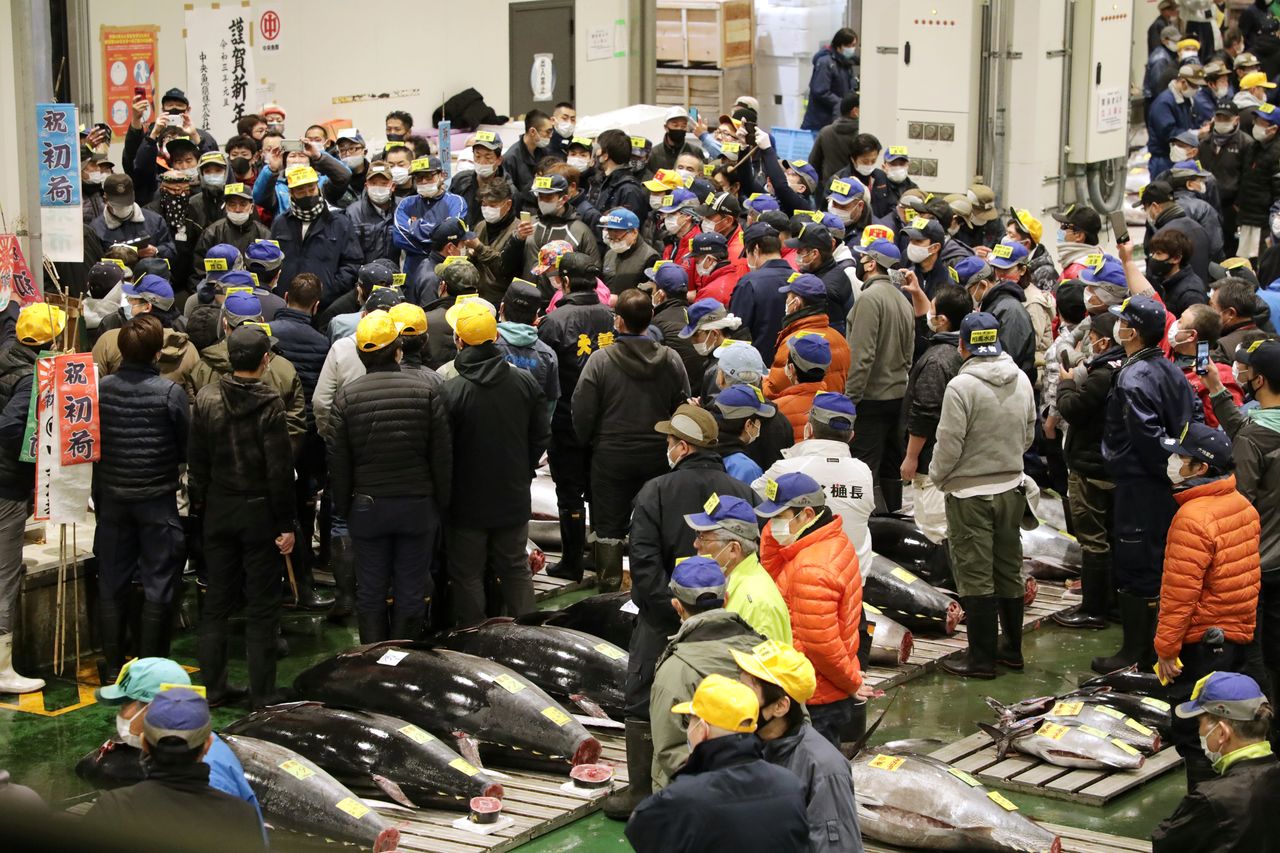 This year’s, the New Year auction did not deliver the high prices it is famed for.

As the third wave of the pandemic swept through Japan, hitting Tokyo especially hard, the government declared a state of emergency for Tokyo and surrounding prefectures on January 7, which caused the Toyosu market to experience its worst slump since the spring of 2020. Many complain that business has been very quiet since last spring, and say that if things continue this way, many traders will go out of business.

With the public staying home and therefore eating in more, sales to supermarkets and fishmongers continue to be brisk. Consumption of cheaper fish, like mackerel and sardines, and processed fish goods is strong, and buyers from supermarkets scrambling to close deals are a common sight in the wholesale section of the market.

However, these cheaper varieties popular with supermarkets are not the only fish that arrive at the market. Toyosu also sees more than its fair share of the choicest Ōma bluefin tuna, sea urchin, snow crab, and lobster, because of projected demand from the greater Tokyo area, which has a high concentration of high-end restaurants. The traders who work at the market act as buyers for high-end sushi restaurants and hotel restaurants in upscale areas like Ginza and Marunouchi.

“The situation is hopeless. It’s no good having the produce delivered from the ports if traders aren’t going to buy it,” said a trader in high-end fish in mid-January. The trader said business had fallen by two thirds, and with demand from restaurants right down, traders were in no position to bid on wholesale auctions. 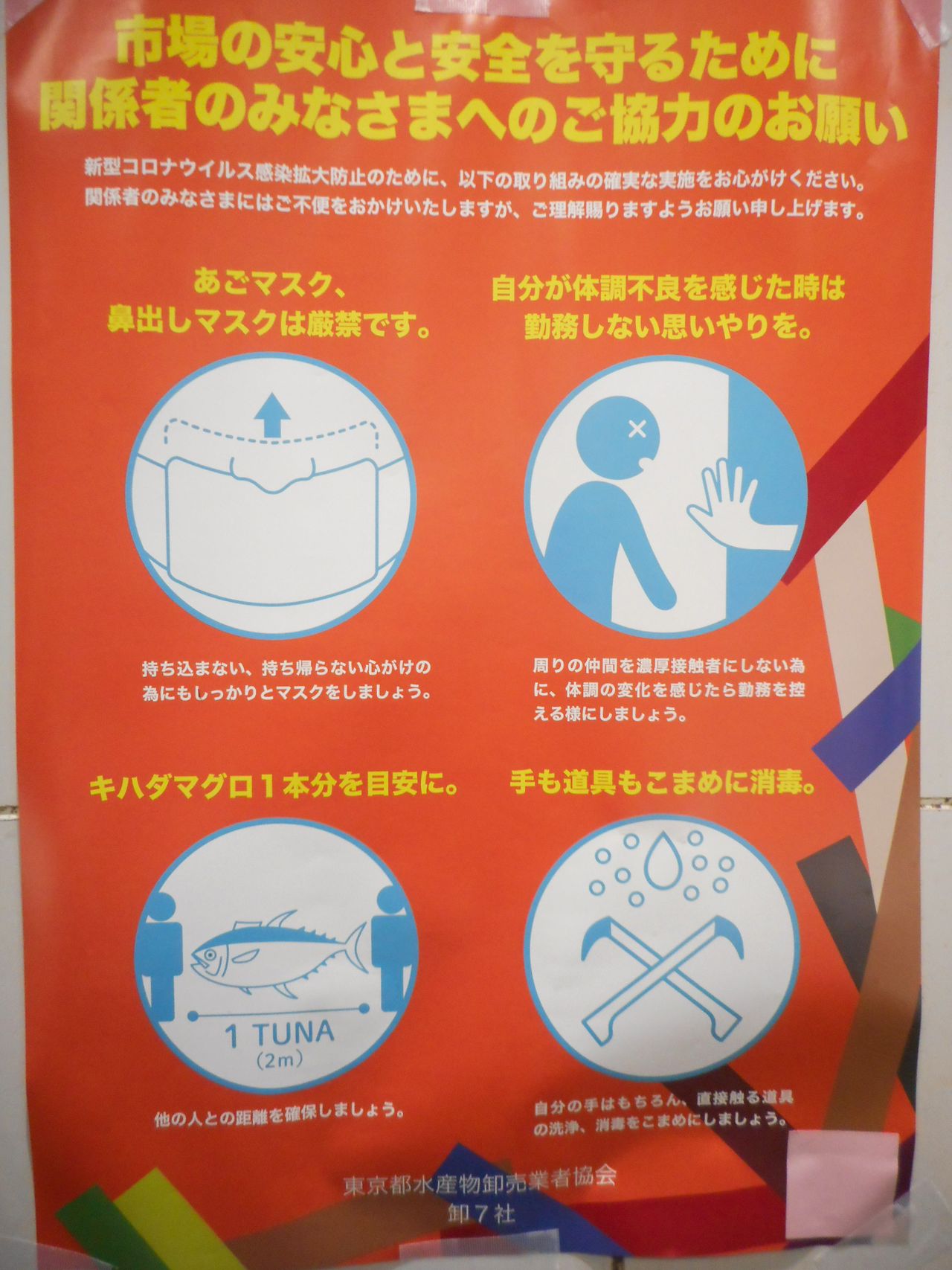 This poster on social distancing advises people to stand “one tuna-length” apart. (Provided by a Toyosu Market worker)

Suzuki Tsutomu, the proprietor of the tuna wholesaler Suzutomi, also operates a chain of sushi restaurants in Tsukiji and Ginza. In an interview in March, he noted that in the state of emergency he buys far fewer tuna at the auction, as his restaurants are forced to operate on reduced hours.

“This is no time to be dispirited. If anything, I take my job even more seriously.” says Suzuki.

According to TV news reports, Ginza and Shibuya are seeing more foot traffic now than they did in spring 2020.

“Perhaps because people are working from home more, far fewer customers frequent sushi restaurants in places like Ginza,” says Suzuki. “I have to make sure that I am more discerning than ever about quality and freshness for the sake of those customers who do come.” 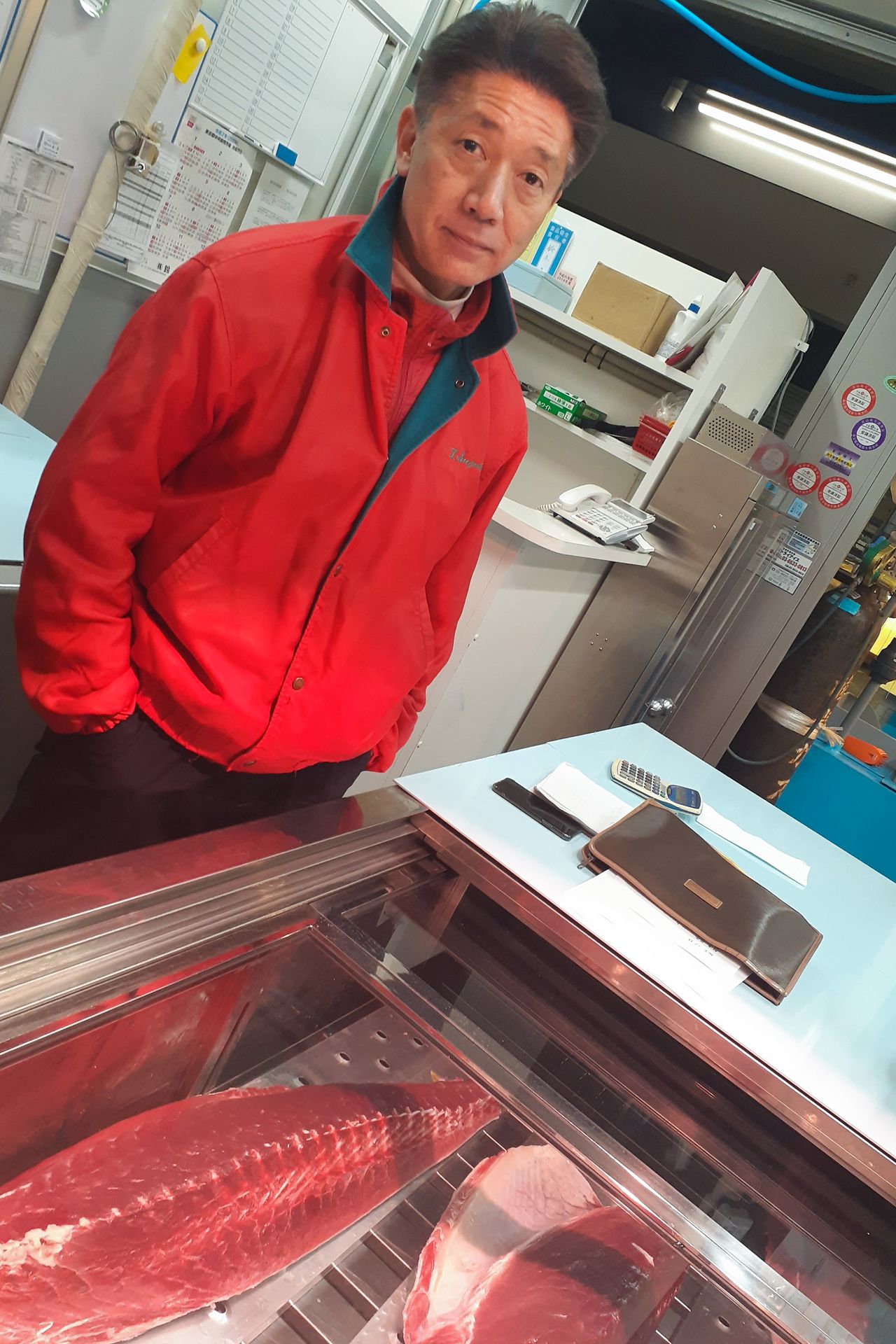 Tanaka Yoshinao, the owner of Daihana, which chiefly trades in frozen fish, says: “There are fewer bids at auction, so some days you can get bluefin tuna for 30 to 40 percent less than usual. I try and think of this as a good opportunity to give my customers high-quality tuna at low prices.”

Regarding the fact that orders from Tokyo sushi restaurants have fallen significantly, Tanaka says declaratively, “At times like these it is our duty to use the discernment of Toyosu and the traders to buy high quality fish.” 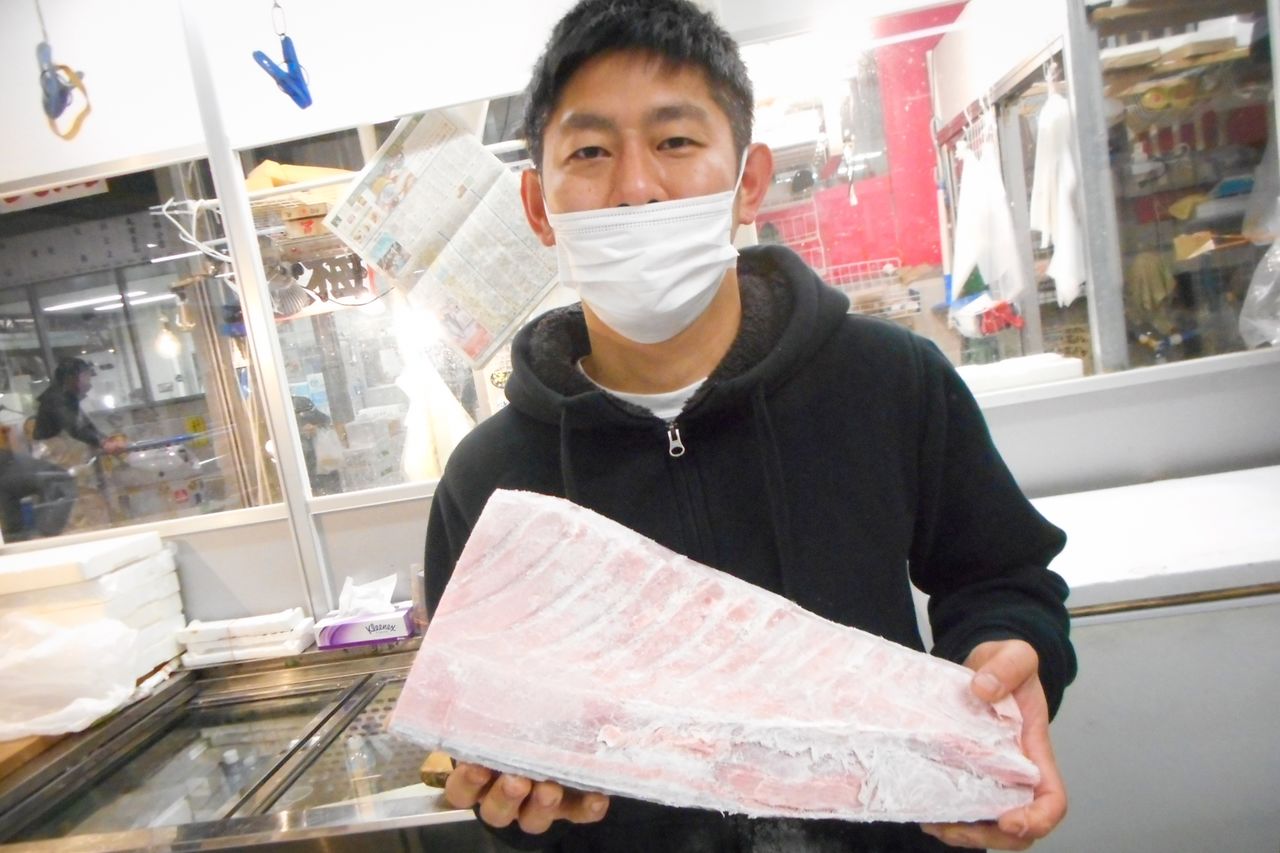 Demand for produce that is transported live, such as bream, flatfish, conger eel, and octopus, has also plummeted due to the fact that these varieties tend to be aimed at restaurants. Toyosu wholesalers say they are looking for new sales channels. One merchant comments: “At the moment, live fish and seafood are sometimes actually cheaper than fish slaughtered on site. Because these varieties are transported live, we want to work with wholesalers to find buyers.”

Restaurants complying with orders to close early under the state of emergency are eligible for up to ¥60,000 per day in compensation. While this may be little more than a pittance for high-end restaurants, the Toyosu traders that supply those restaurants and the wholesalers supplying them in turn are not eligible for the grants at all. Both the traders and the wholesalers are dedicated to their work as fish professionals in order to meet satisfy demand from restaurants and other customers that come to buy fish at the “kitchen of Japan.” As the firefly squid and bonito seasons approach, one cannot but hope that an end to the pandemic arrives as soon as possible. 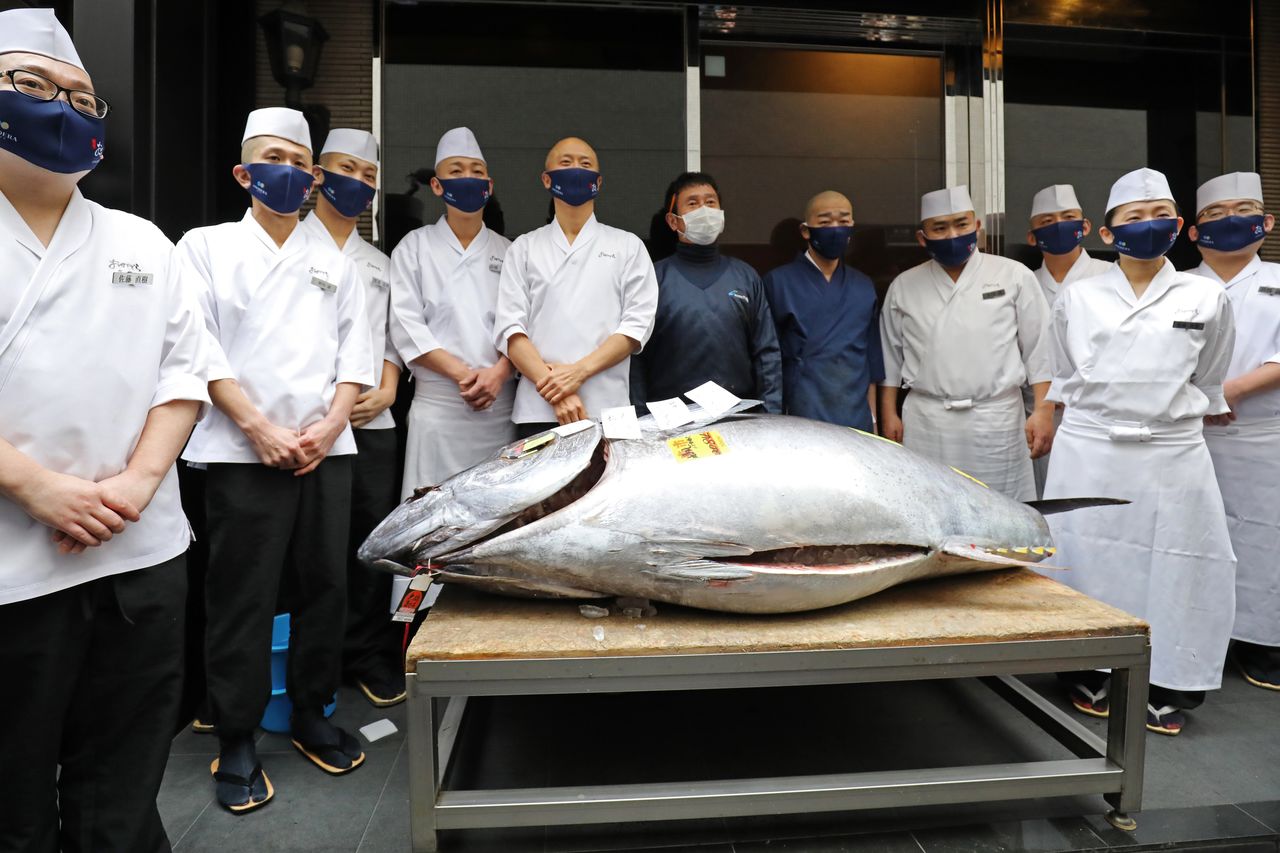 Yamayuki owner Yamaguchi Yukitaka (in blue at center-right) in front of the sushi restaurant Ginza Onodera with the first tuna of the new year. (© Jiji)

(Originally published in Japanese. Banner photo: A sign at the market instructs visitors to wear masks. Provided by a Toyosu Market worker.)