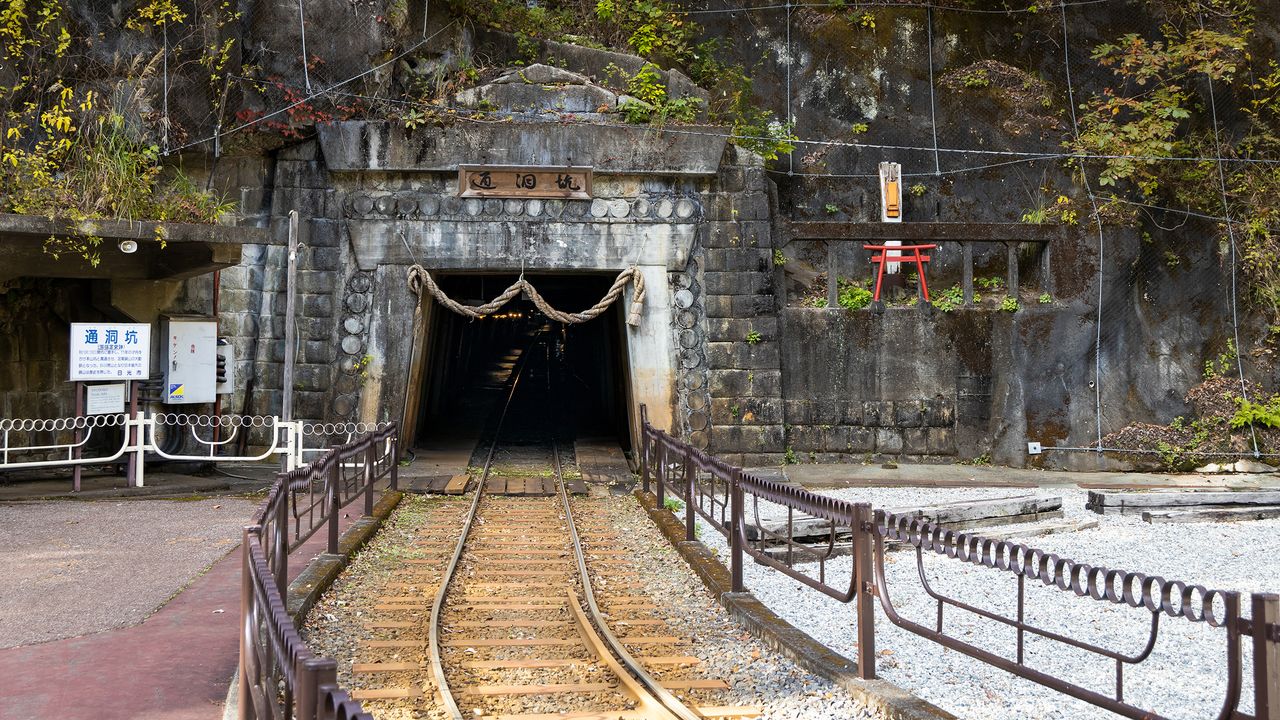 Travel History Guide to Japan Dec 10, 2021
Nikkō in Tochigi Prefecture is a popular daytrip destination from Tokyo. While it is best-known as a World Heritage site, it is also home to the Ashio copper mine, an important industrial legacy site that flourished for more than 400 years. Now a sightseeing attraction, the mine features a ride on a trolley train that takes visitors along a 700-meter-long mining shaft.

The Ashio copper mine in Nikkō, Tochigi Prefecture, boasts a history dating back centuries. During the Edo period (1603–1868), the shogunate directly administered the site, which was Japan’s top copper producer from the latter decades of the nineteenth century through to the 1920s. The mine ceased operation in 1973, and debuted as a sightseeing attraction seven years later.

Visitors can explore the inside of the mine by riding a trolley train down the Tsūdō mine shaft, which is a national historic site. Inside the shaft, displays show how copper was extracted over the centuries and exhibits describe in detail the important role the Ashio mine played in Japan’s modernization. 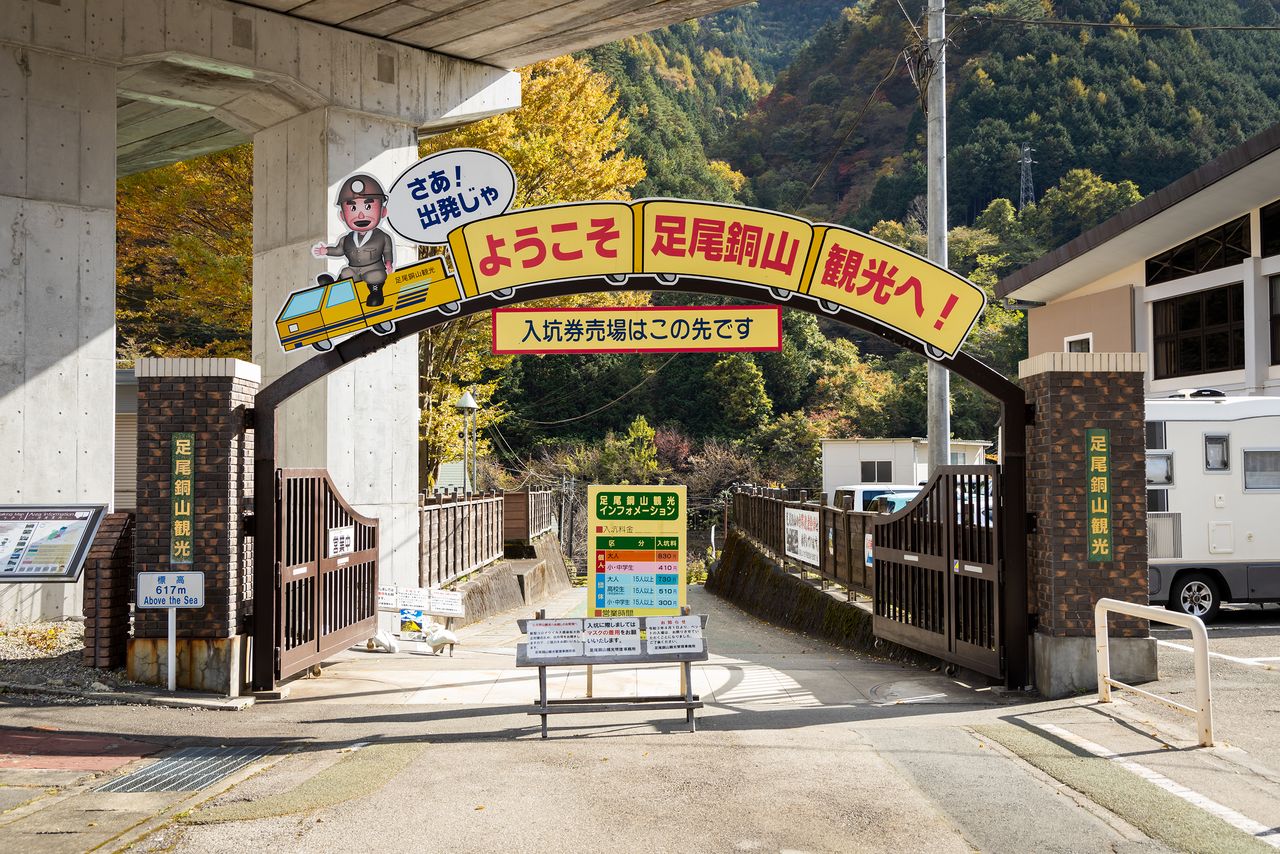 The entrance to the Ashio copper mine. 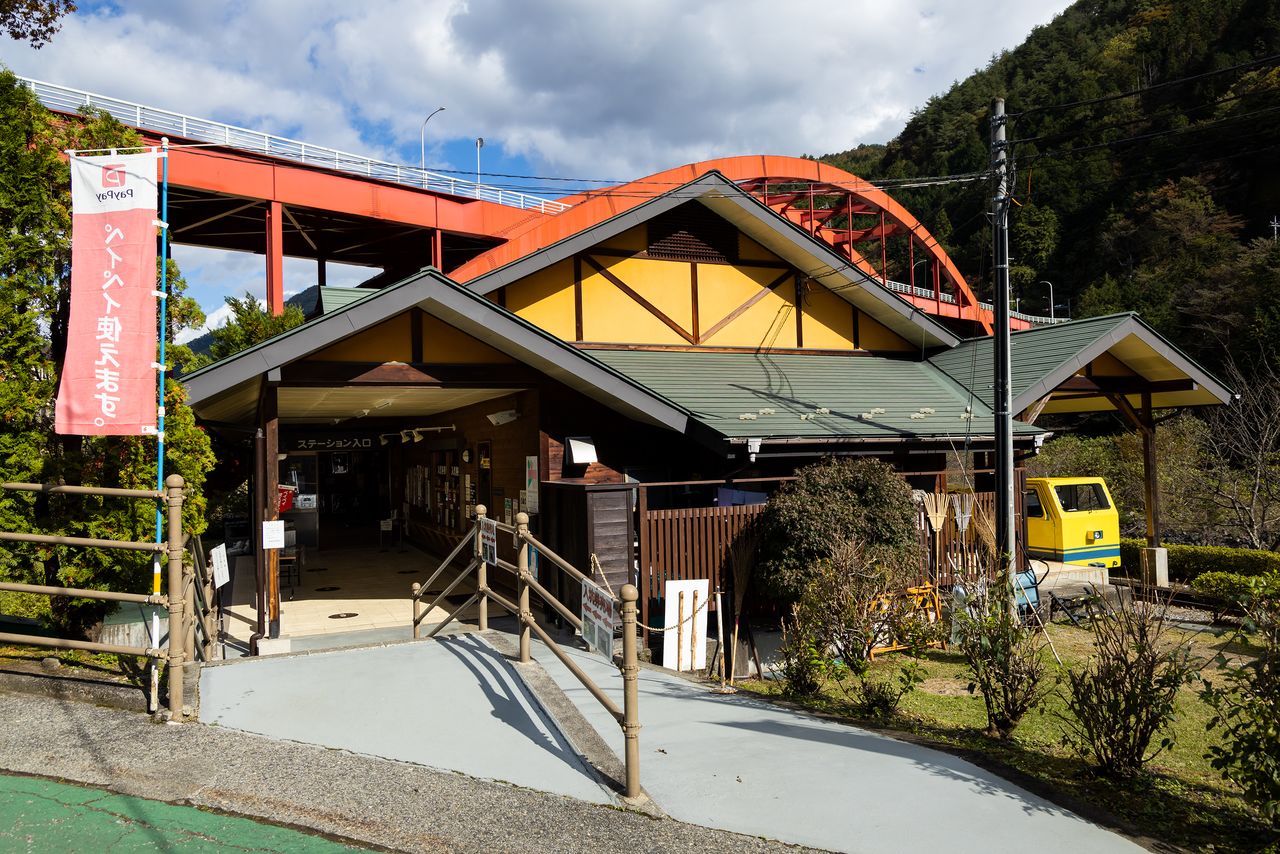 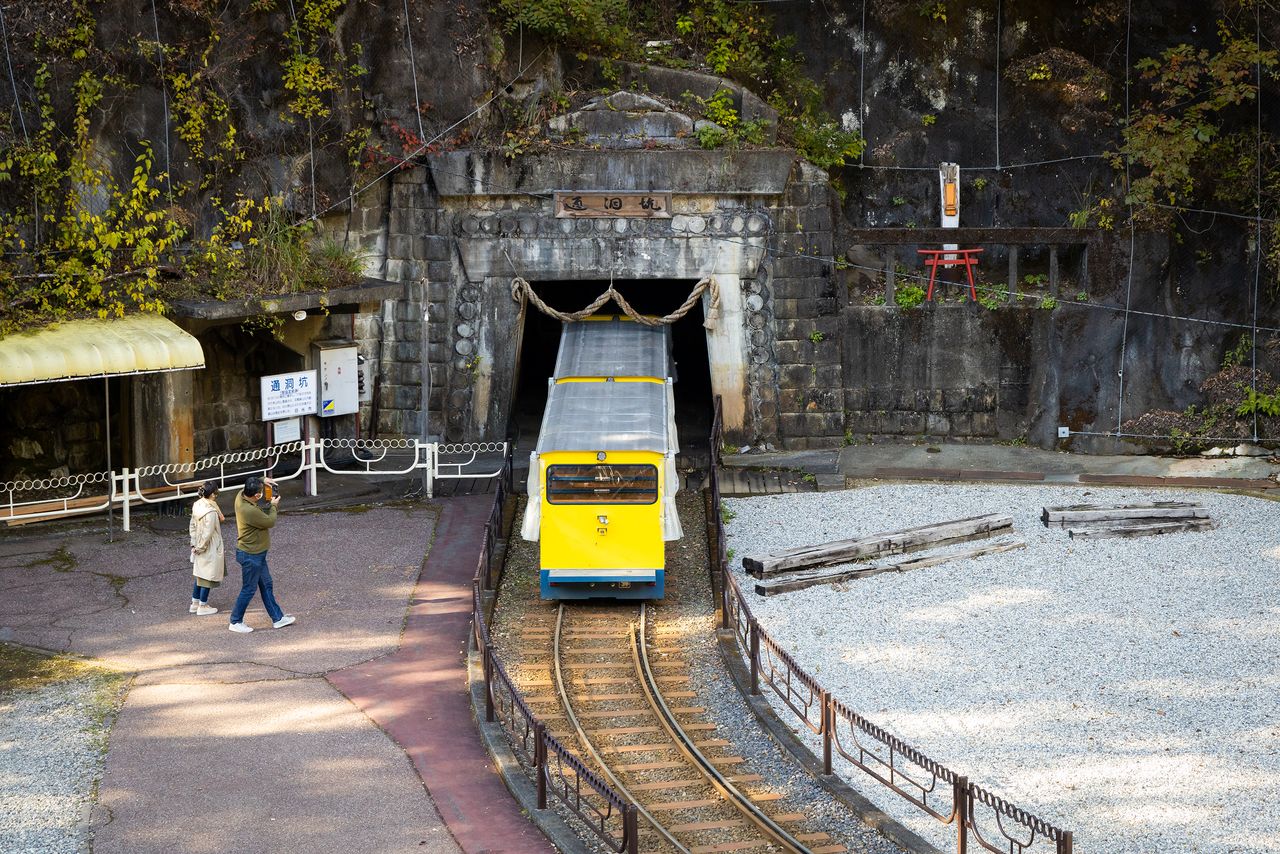 A trolley train enters the Tsūdō mine shaft, where mining operations began in 1885.

Copper mining at Ashio is thought to have started in the latter half of the sixteenth century, with the mine coming under the administration of the Tokugawa shogunate in 1610. Copper extracted here was used for roofing at Nikkō’s Tōshōgū Shrine and the shogun’s castle in the capital of Edo (today’s Tokyo). Copper was also a precious source of revenue, and the government exported the metal to the Netherlands and China via the port of Nagasaki. Yearly production using traditional methods peaked in the late seventeenth century at 1,500 tons, but steadily declined thereafter. To create employment for the miners, the shogunate established a mint adjacent to the mine where it produced copper coins known as Kan’ei Tsūhō. 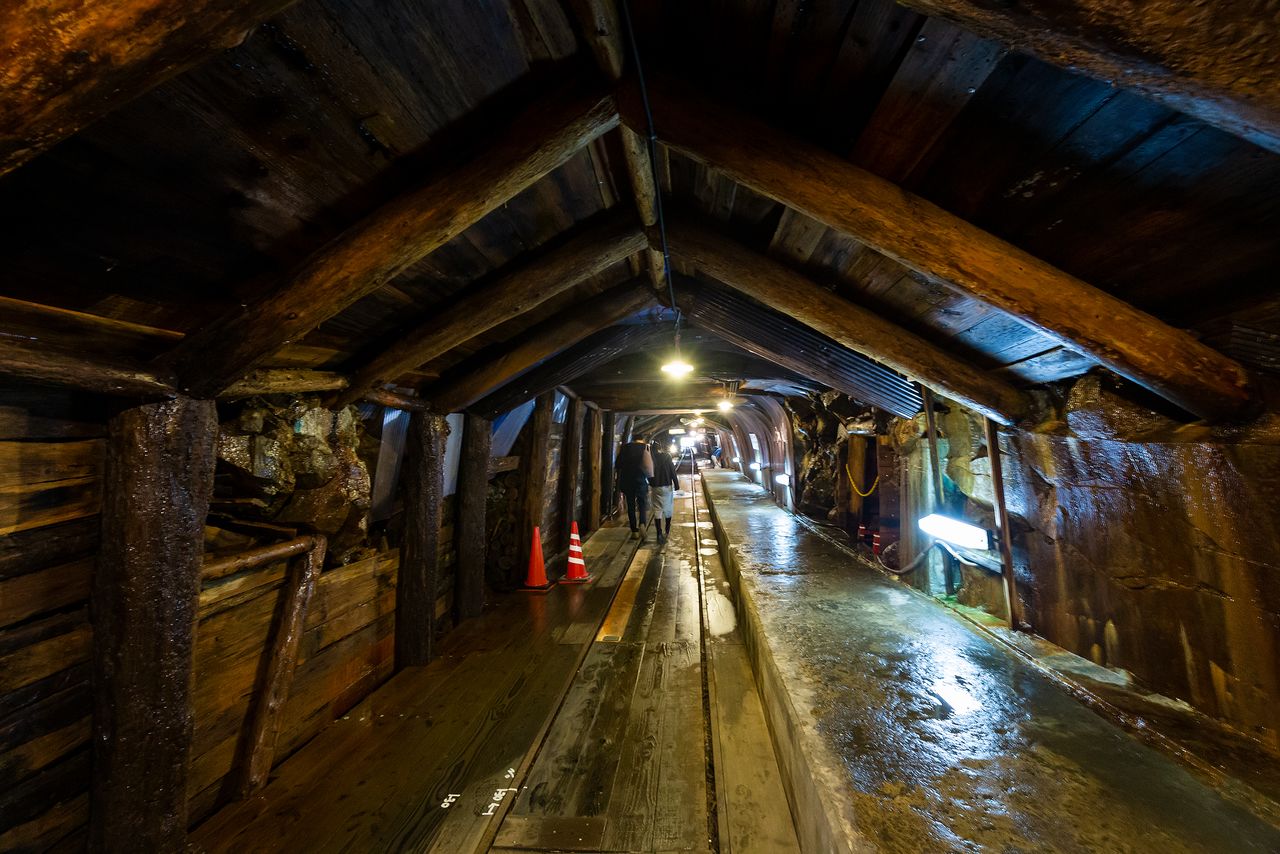 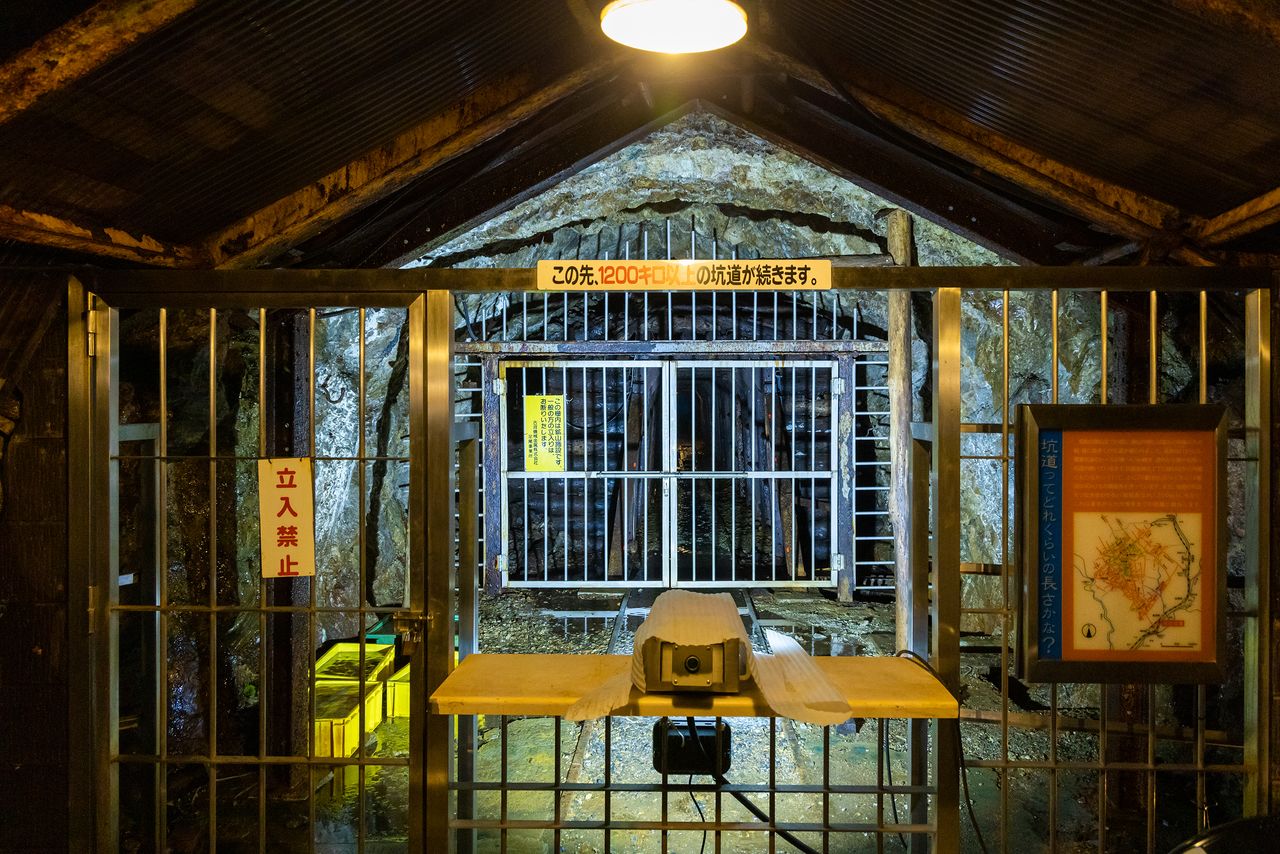 The mine’s many underground shafts snake through the surrounding rock, stretching a total of 1,200 kilometers. 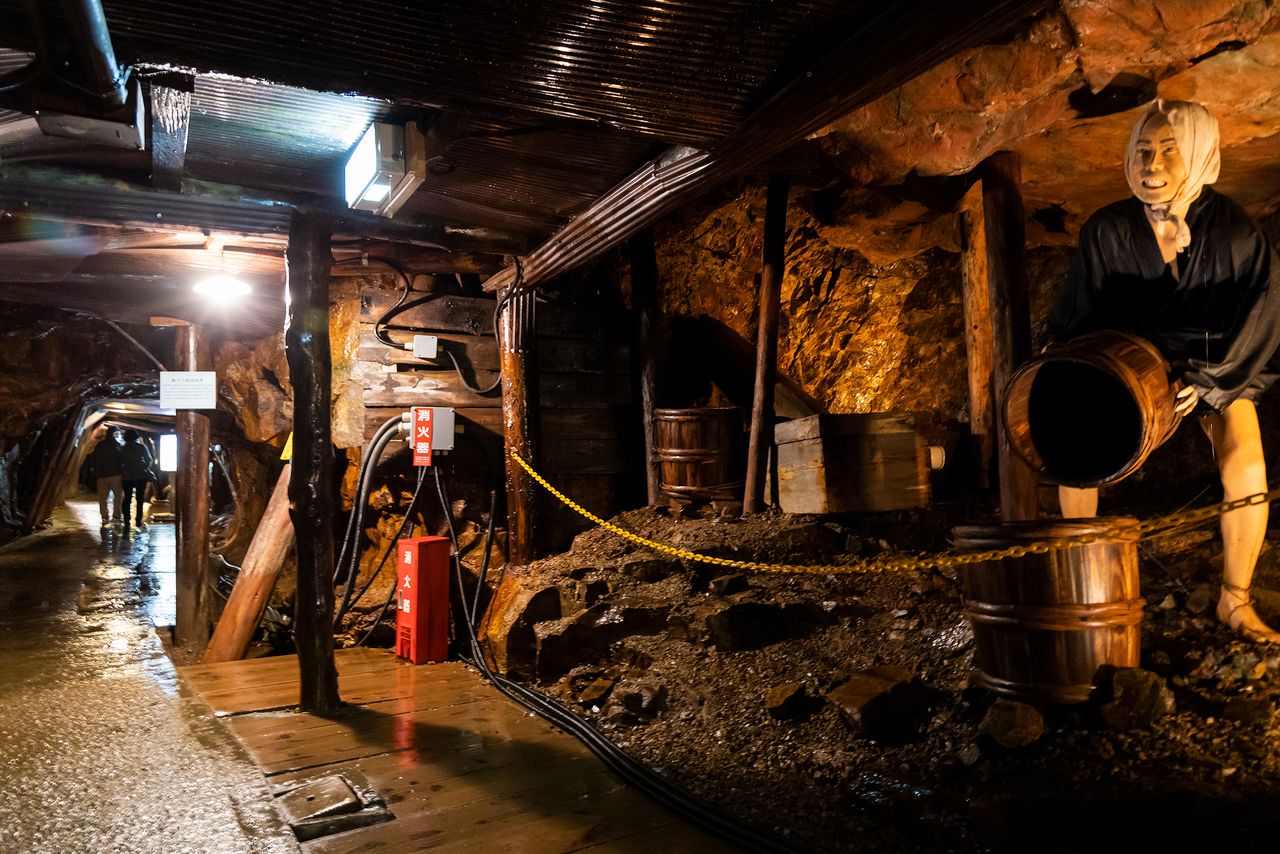 Realistic figures recreate the backbreaking labor of Edo-period mine workers. 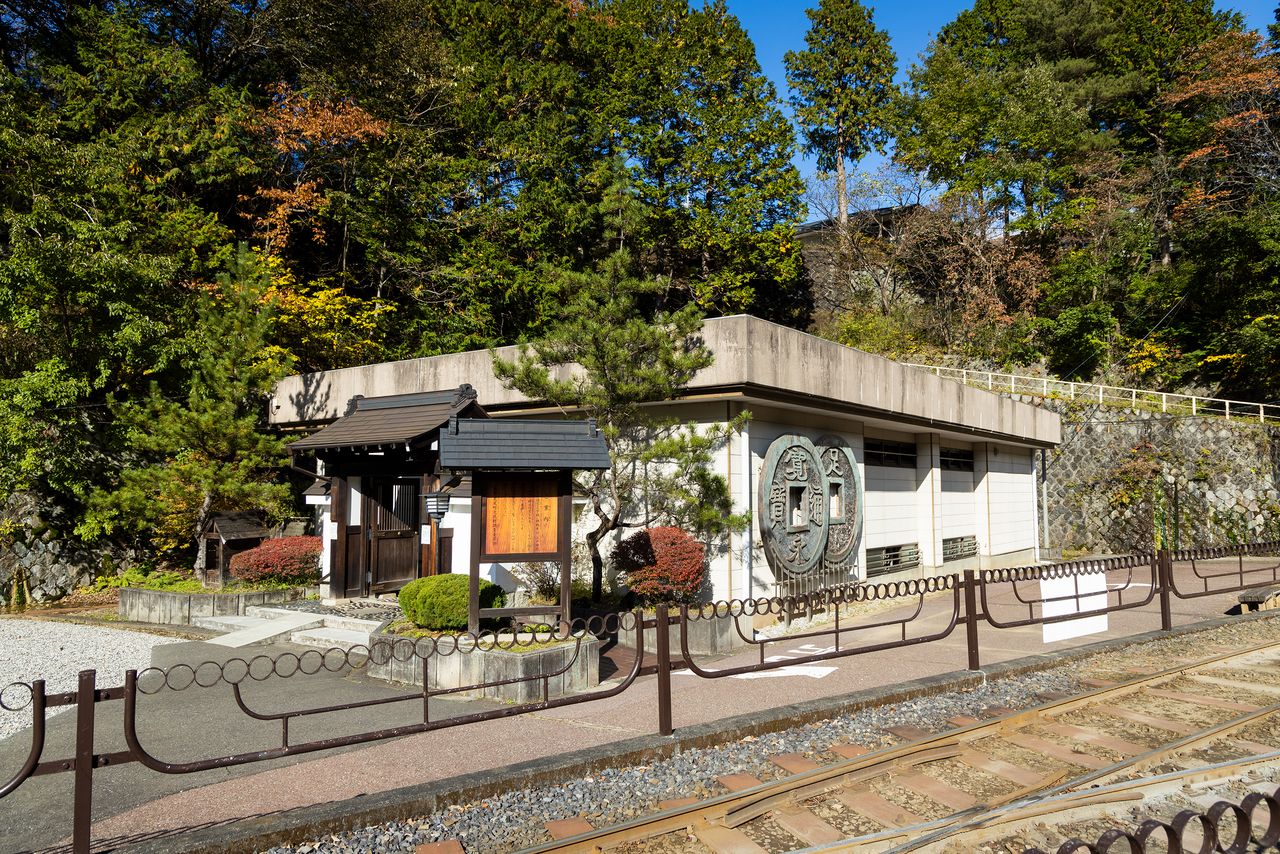 Along the tracks, an exhibit at the site of the old mint shows how Kan’ei Tsūhō copper coins were produced.

The Dark Side of Industrialization

Copper output continued to dwindle, and in 1877 the mine was sold to private interests that included famed entrepreneur Shibusawa Eiichi. The new owner, Furukawa Ichibei, introduced Western mining technology and tapped extensive new copper veins. Seven years later, Ashio had become the most productive copper mine in the country. It was the first mine to introduce electric trolleys, in 1891, and production continued to increase, eventually reaching 40% of Japan’s copper production.

In the peak year of 1916, miners extracted more than 14,000 tons of copper from the mine. Workers flocked to the site, swelling the population of Ashio to 38,000 people, making it the second largest city in Tochigi after Utsunomiya, the prefectural capital. Known as the copper capital of Japan, Ashio became the backbone of the Furukawa zaibatsu, a powerful prewar industrial conglomerate. Production continued into the postwar years, although output steadily dwindled until the operating firm finally decided to close the mine for good. Smelter operations continued for a time, but were discontinued in 1988. 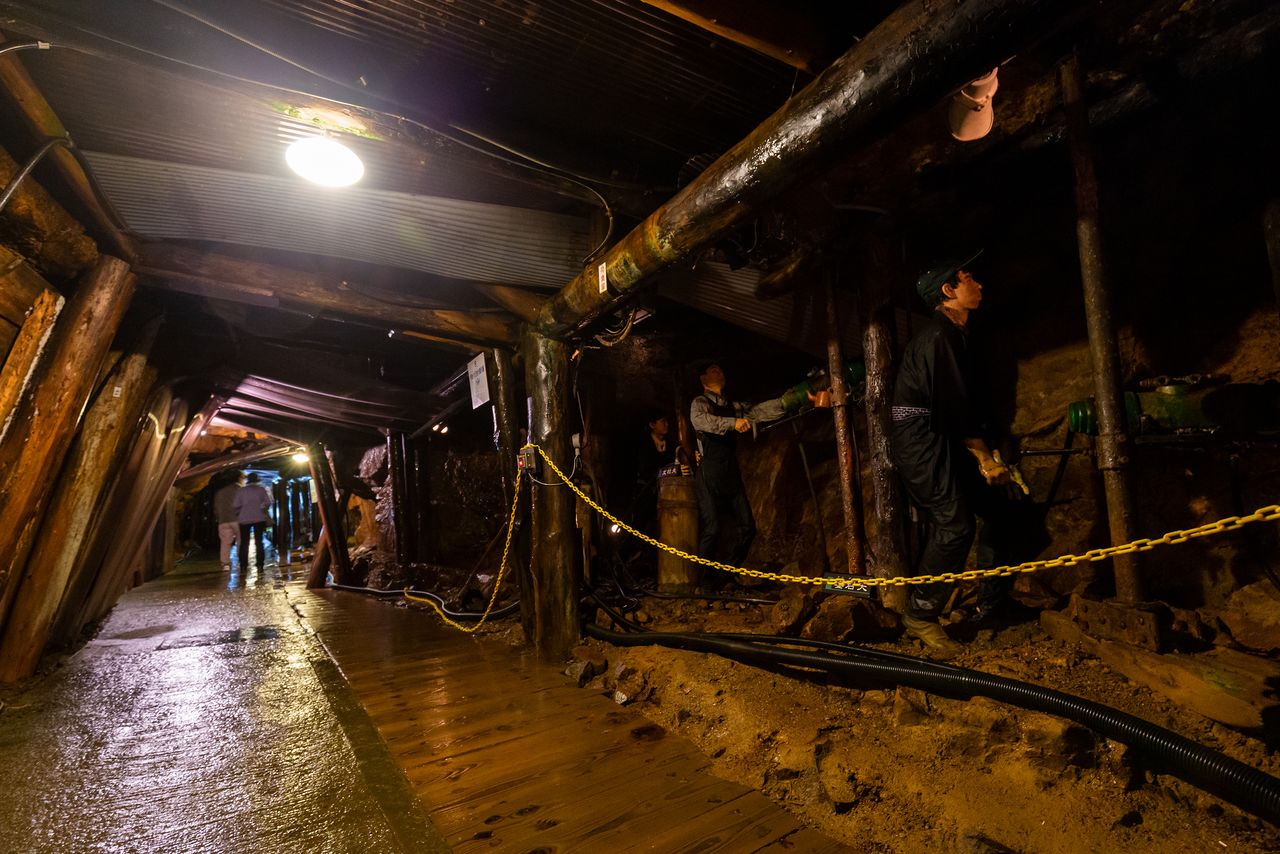 Mining operations were gradually modernized with the adoption of compressors and other machinery. 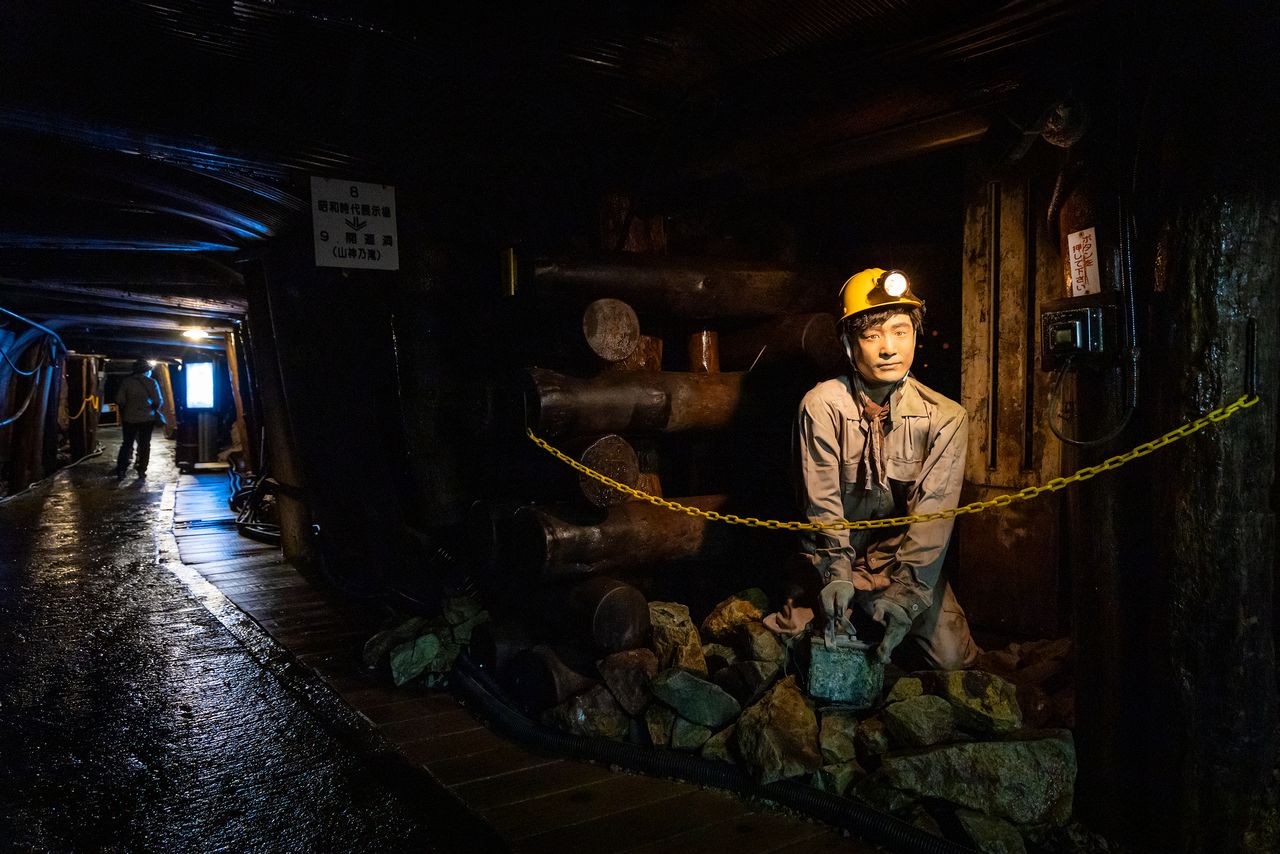 Pushing the plunger to set off dynamite. Visitors can push a button to hear the workman’s warning shout and the sound of the explosion.

An exhibit inside the mine displays a model of the mine’s copper smelter and the first electric trolley.

While the Ashio copper mine contributed greatly to Japan’s modernization, its name is also associated with the country’s first major pollution disasters. Mining operations contaminated the nearby Watarase River and surrounding agricultural land, seriously affecting crops and the health of the local population. Toxins from the smokestacks of the mine’s copper smelters also killed the surrounding trees. A protest movement arose in the 1890s, and leader Tanaka Shōzō even appealed directly to Emperor Meiji (r. 1867–1912) to intervene.

The Ashio copper mine is about 30 minutes by car from Nikkō Tōshōgū’s historic complex of shrines and temples. After touring the Tsūdō mine shaft, a visit to the Furukawa Ashio History Museum brings the lights and shadows of the mine and its operations into sharper focus. A tree planting project was started in 1957 to restore the natural surroundings and today, the Watarase River runs clear and the mountains are green again. 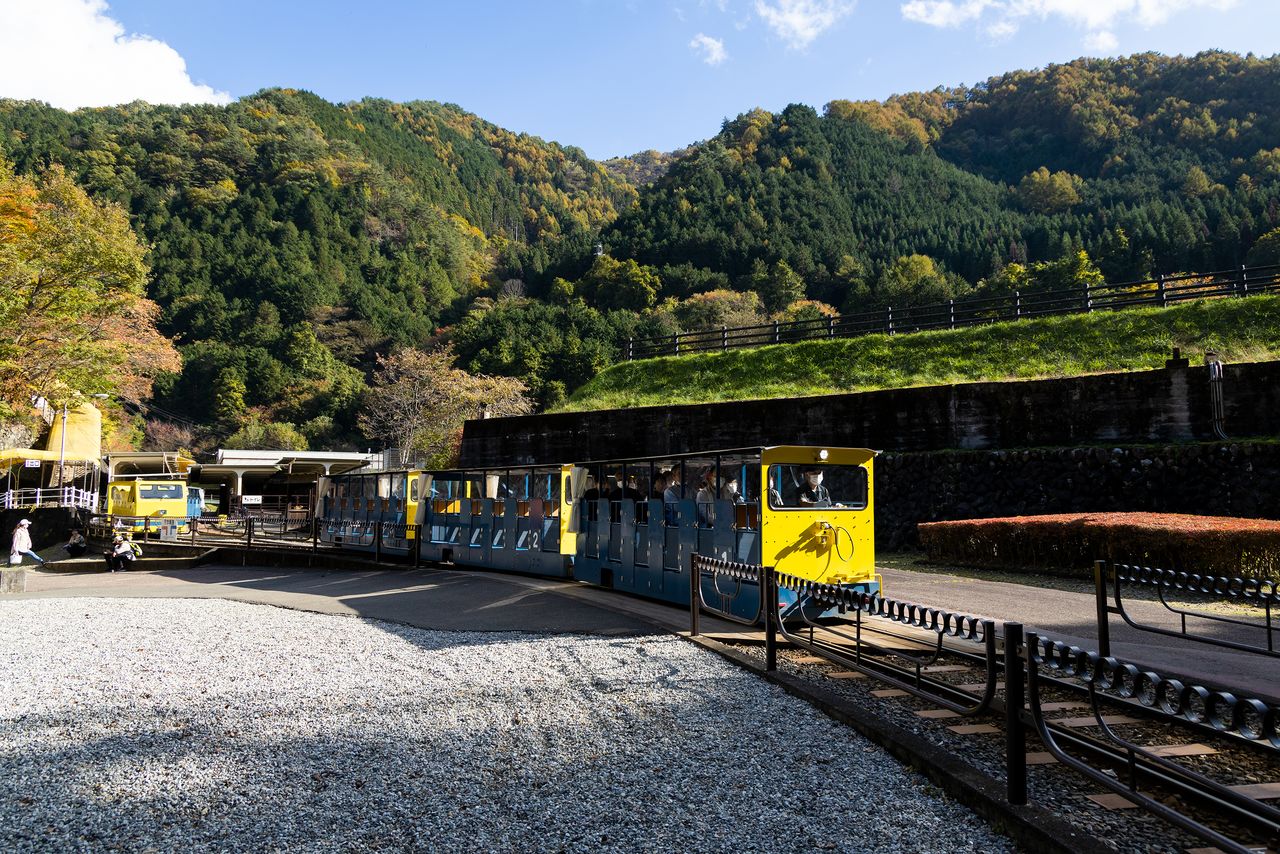 The Watarase River runs near the plaza where the trolley trains operate. 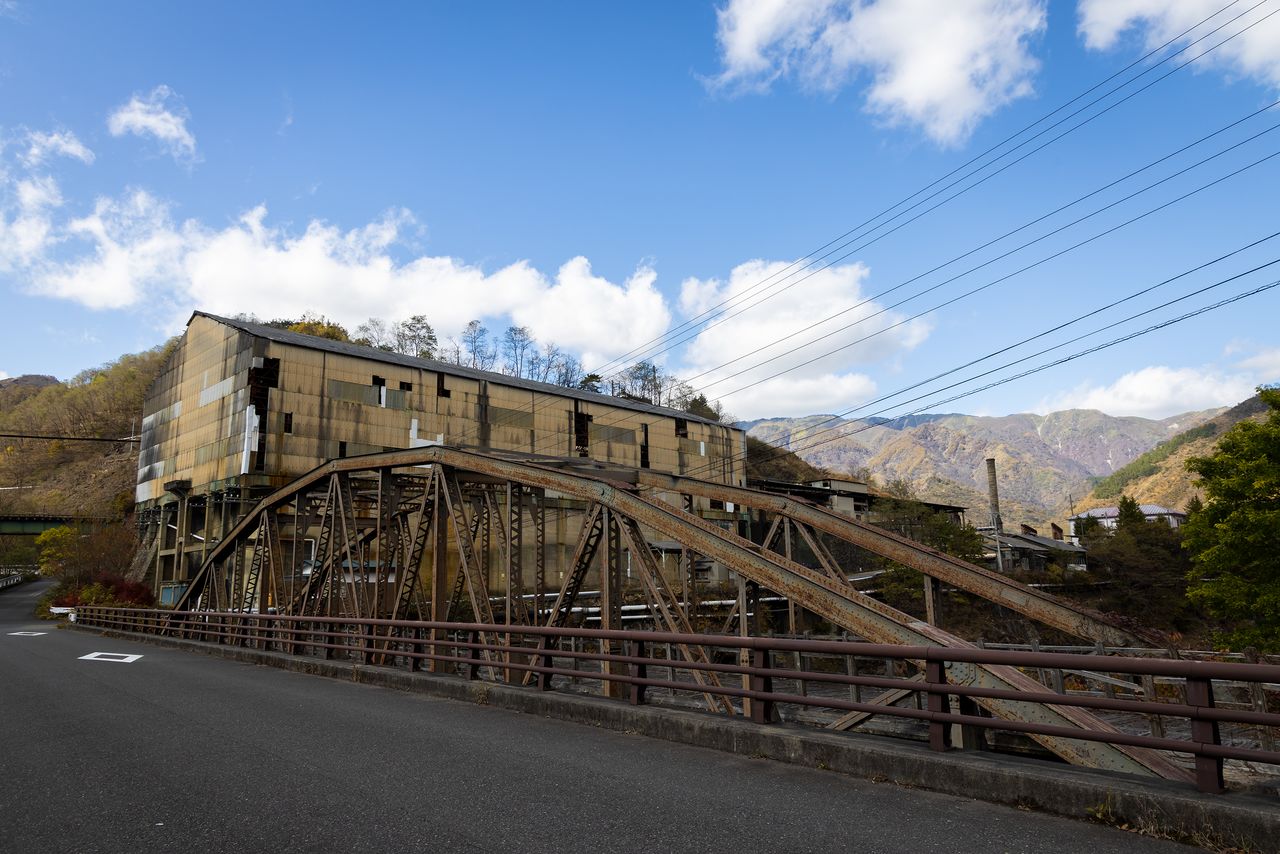 The iron truss Furukawa Bridge (foreground), an important cultural property, spans the Matsuki River, a tributary of the Watarase River. The old Honzan smelter stands idle in the background. 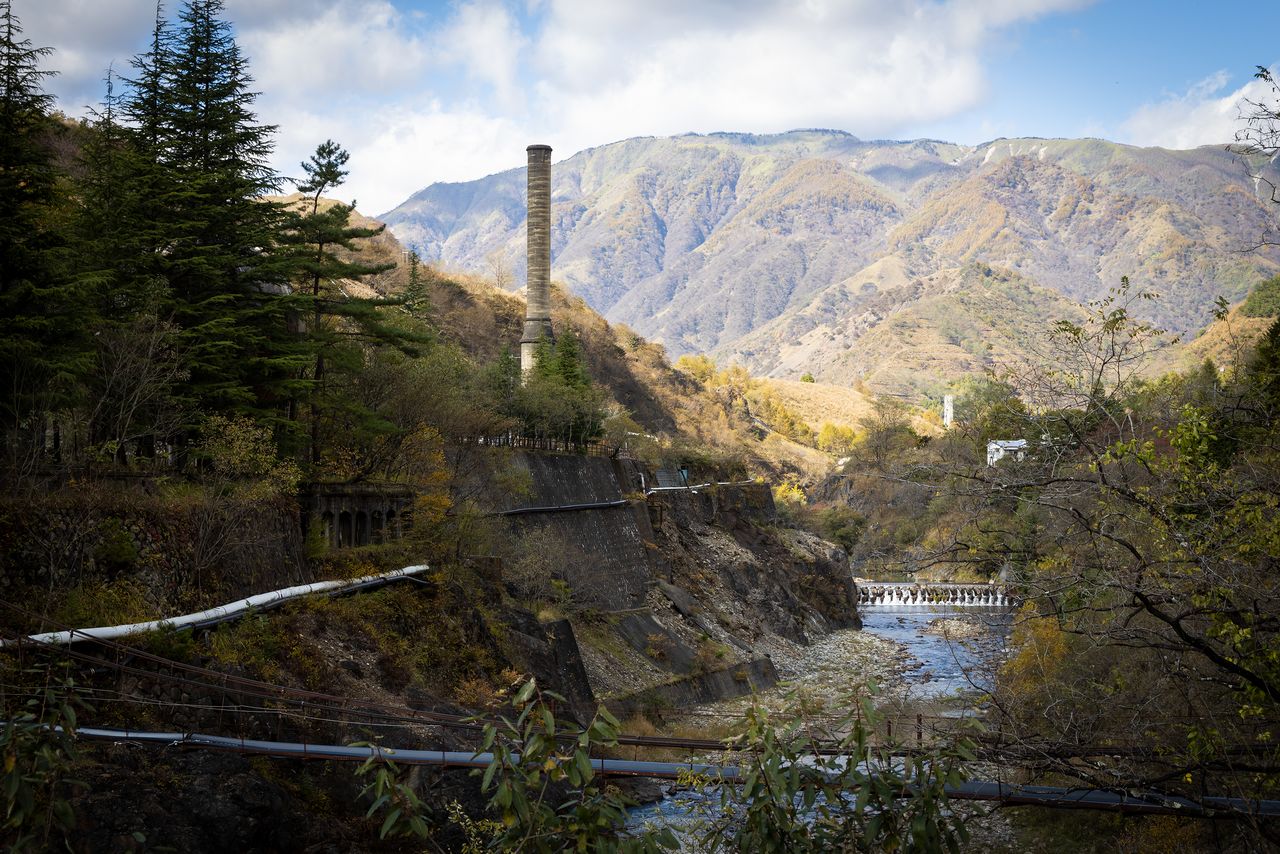 A lone smokestack stands on the forested riverbank.