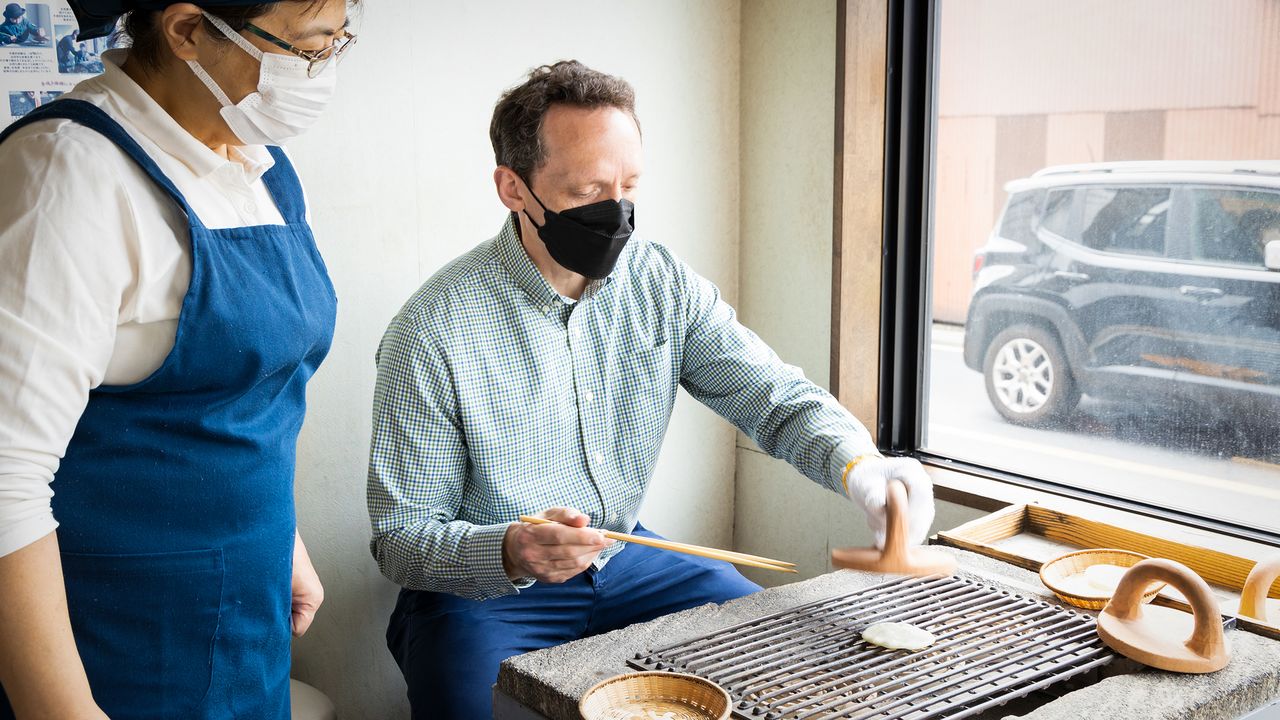 Travel Food and Drink History May 20, 2022
The city of Sōka in Saitama Prefecture is known for its savory rice crackers, a reputation that dates back to its history as a bustling post town on the ancient Nikkō Kaidō. Today, visitors can experience the culinary roots of Sōka senbei by making rice crackers the old-fashioned way, or nibble on the crisp snacks while wandering the lanes and pine-lined trails once traversed by the famed poet Matsuo Bashō.

Sōka in Saitama Prefecture is known for its senbei. The city’s connection to the crunchy, savory rice cracker dates from the Edo period (1603–1868) when Sōka was a lively post town on the busy Nikkō Kaidō, an important highway that linked the capital of Edo (now Tokyo) with provinces in the north. Sold at shops along the old highway, the snacks became a favorite refreshment of road-weary travelers, turning senbei into a cottage industry.

Rice crackers are still big business in Sōka today. The city’s many manufacturers ship their wares to eager customers across Japan and further afield. Close to Tokyo, Sōka is also an attractive day-trip destination for visitors who want to experience the town’s rich past and culinary tradition firsthand. 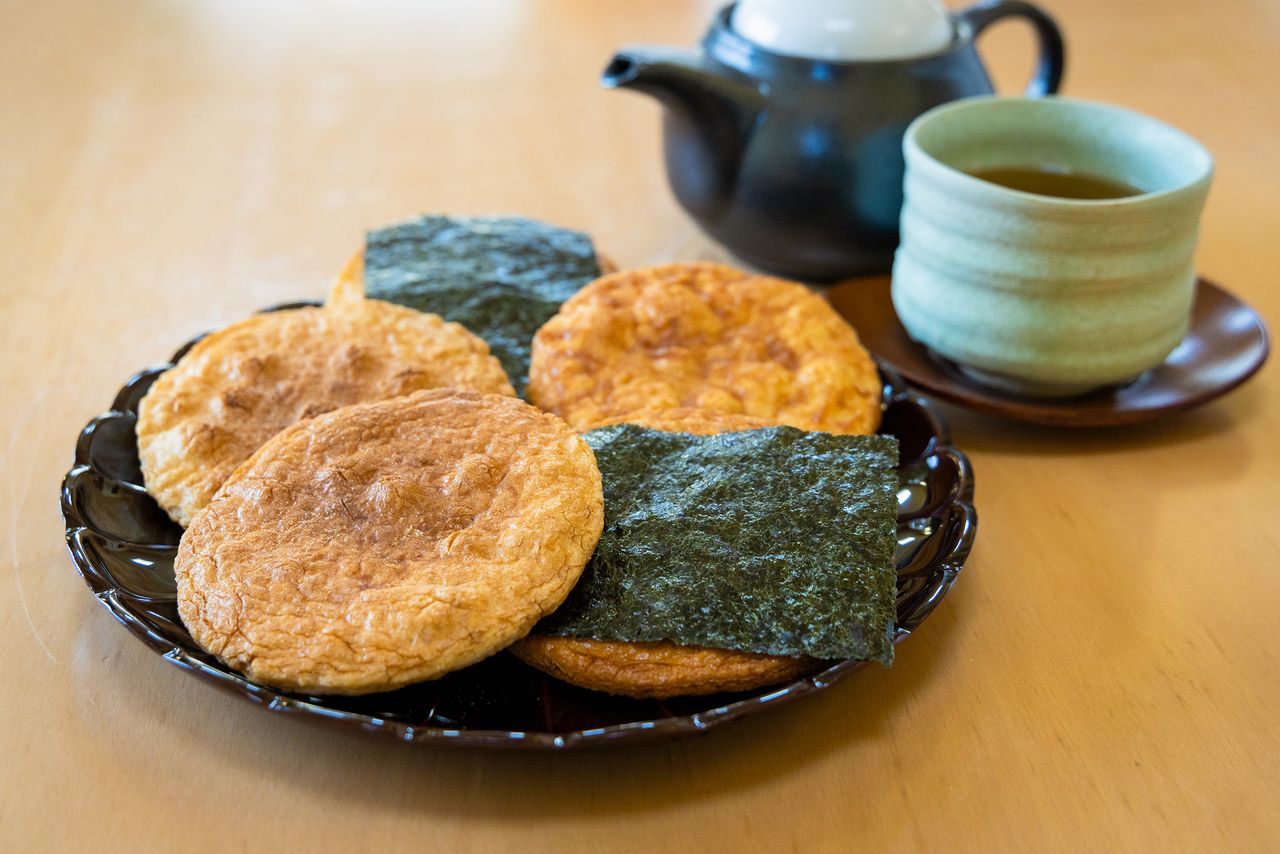 A selection of Sōka senbei. 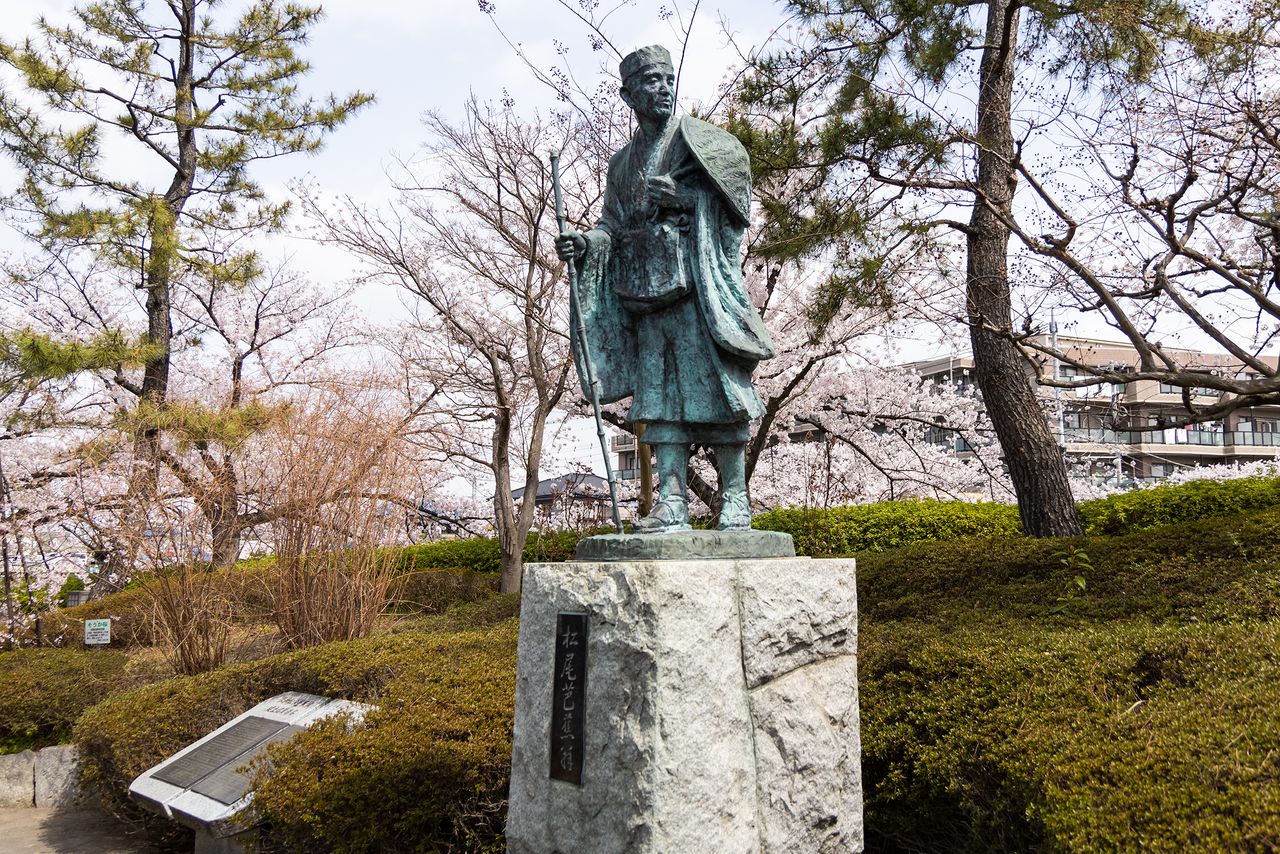 A statue of Matsuo Bashō, who stopped at Sōka during his famous journey through the Japanese countryside.

Another of Sōka’s claims to fame is a visit by celebrated poet Matsuo Bashō, who mentioned the town in his acclaimed work Oku no hosomichi (The Narrow Road Through the Hinterlands). A pine-lined path along the banks of the Ayase River near the old Nikkō Kaidō recreates the atmosphere of the ancient highway that Bashō and others trod. 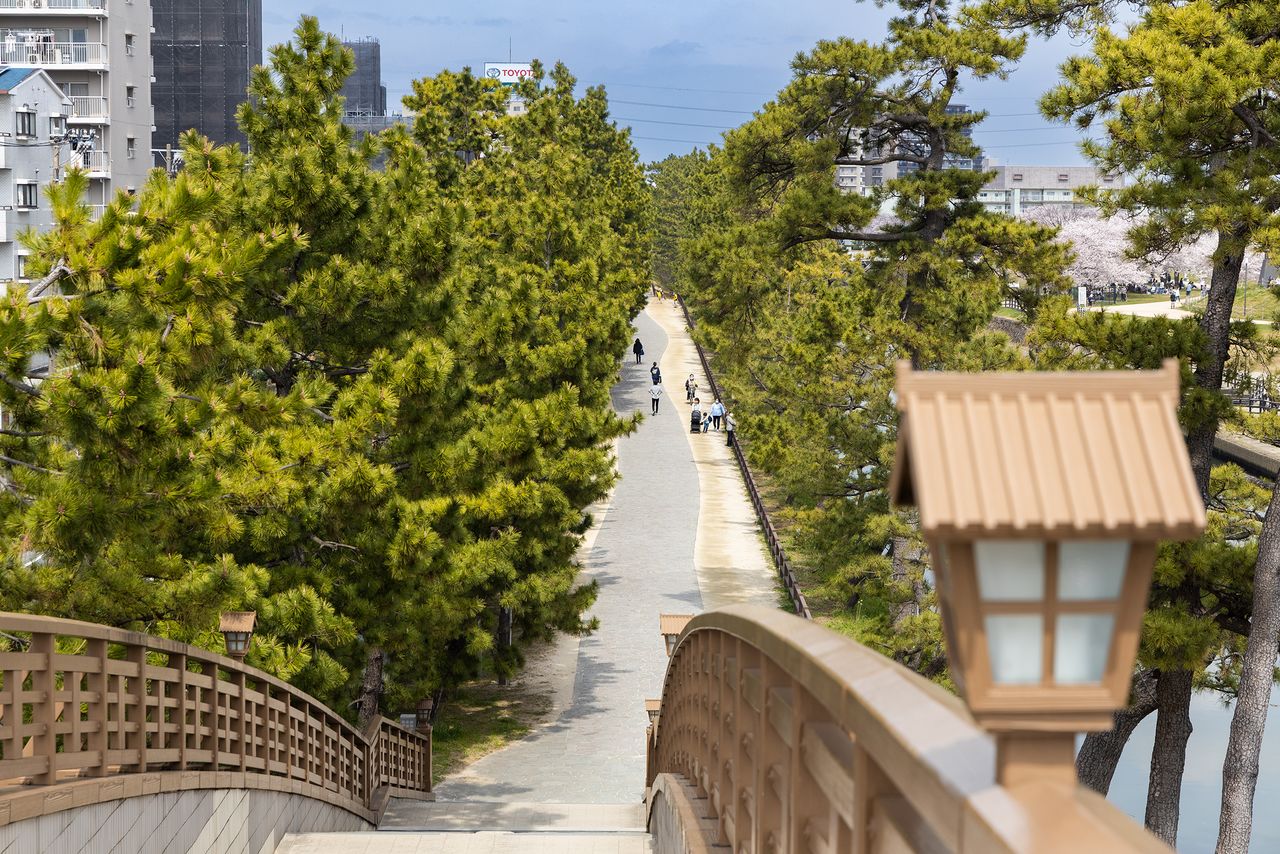 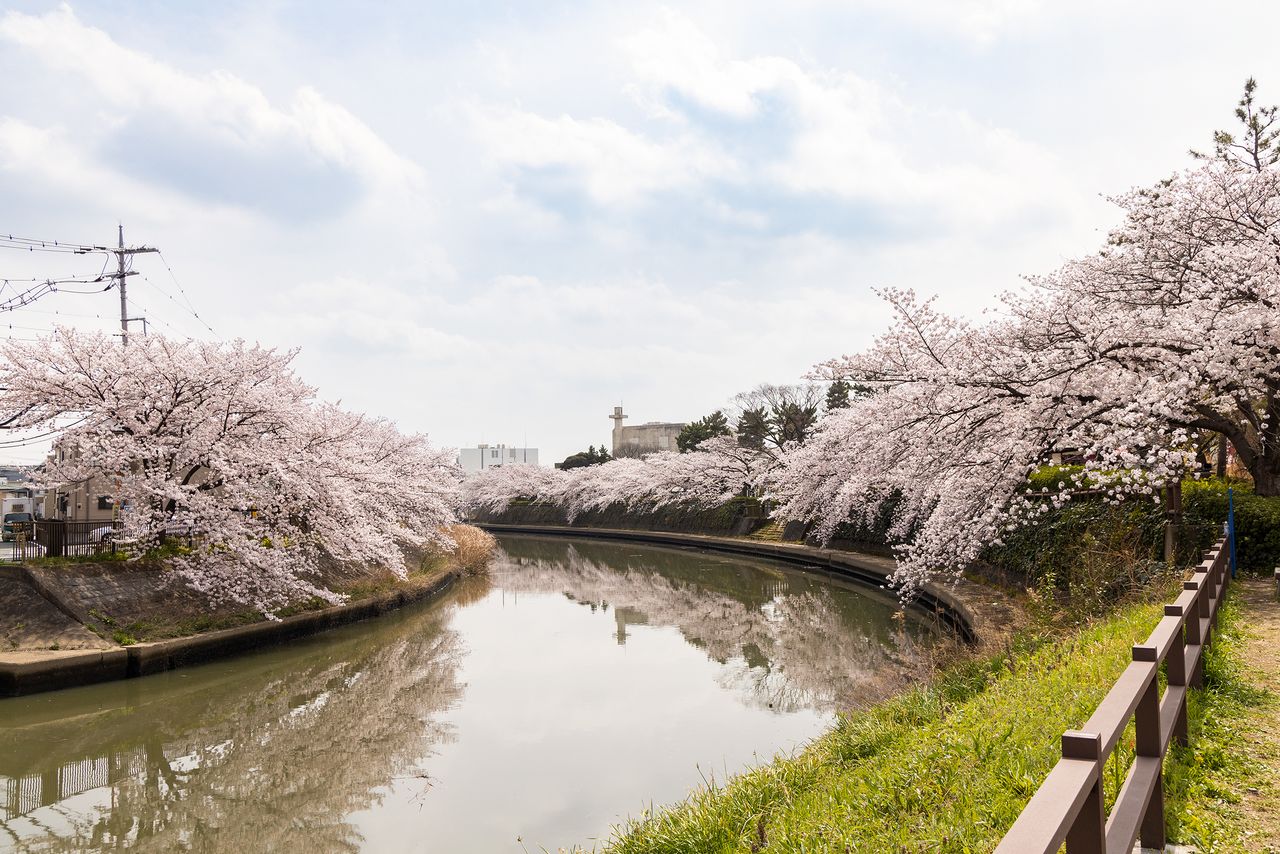 Cherry trees bloom on the banks of the Ayase River. 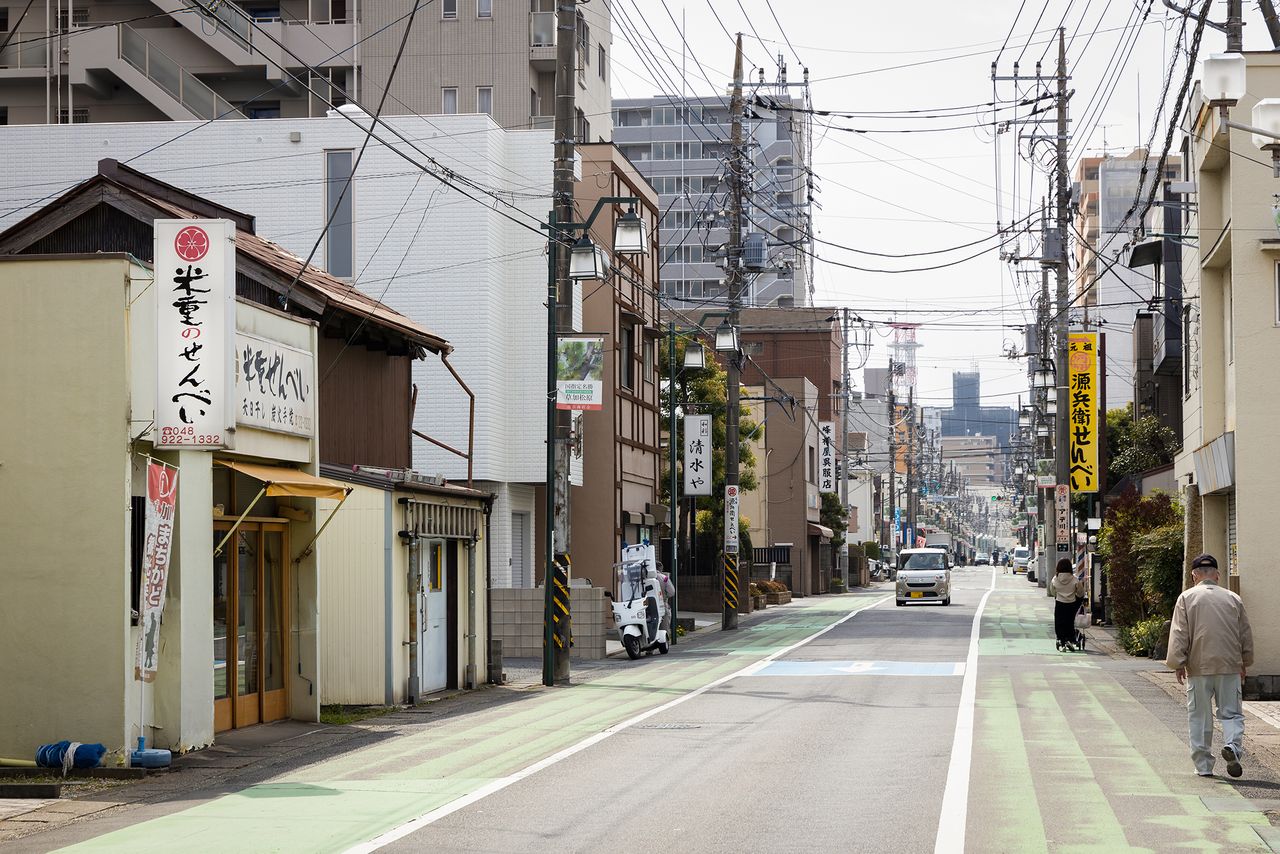 Sōka senbei belongs to a regional style of rice cracker called katayaki that is notable for being extra hard and crunchy. The crackers are made with uruchimai—standard white rice that people eat at meals—instead of the more glutenous mochigome commonly used for other types of rice crackers. Cooked rice is first pounded into a sticky dough, allowed to cool, and then further kneaded. The mixture is then pressed into a sheet—for specialty crackers, ingredients like roasted sesame seeds, powdered nori (seaweed), or red chili pepper flakes are added— and round molds cut the dough into individual discs, which are dried.

To make senbei, the discs are grilled over a gas or charcoal flame until they are slightly brown. The crackers are turned regularly to ensure they cook evenly, and a ceramic press called an oshigawara is applied to keep the senbei from curling. A soy sauce-based tare is brushed on while the crackers are still piping hot. After being allowed to cool, the crackers are ready to be crunched.

There are several senbei shops in Sōka where visitors can try rice-cracker making themselves. One in the historic part of the city near the old highway and Ayase River is Shimeya, which first opened its doors in 1901. The award-winning senbei maker has a dedicated space in the corner of its shop for grilling rice crackers and helpful staff who guide novices through the process. 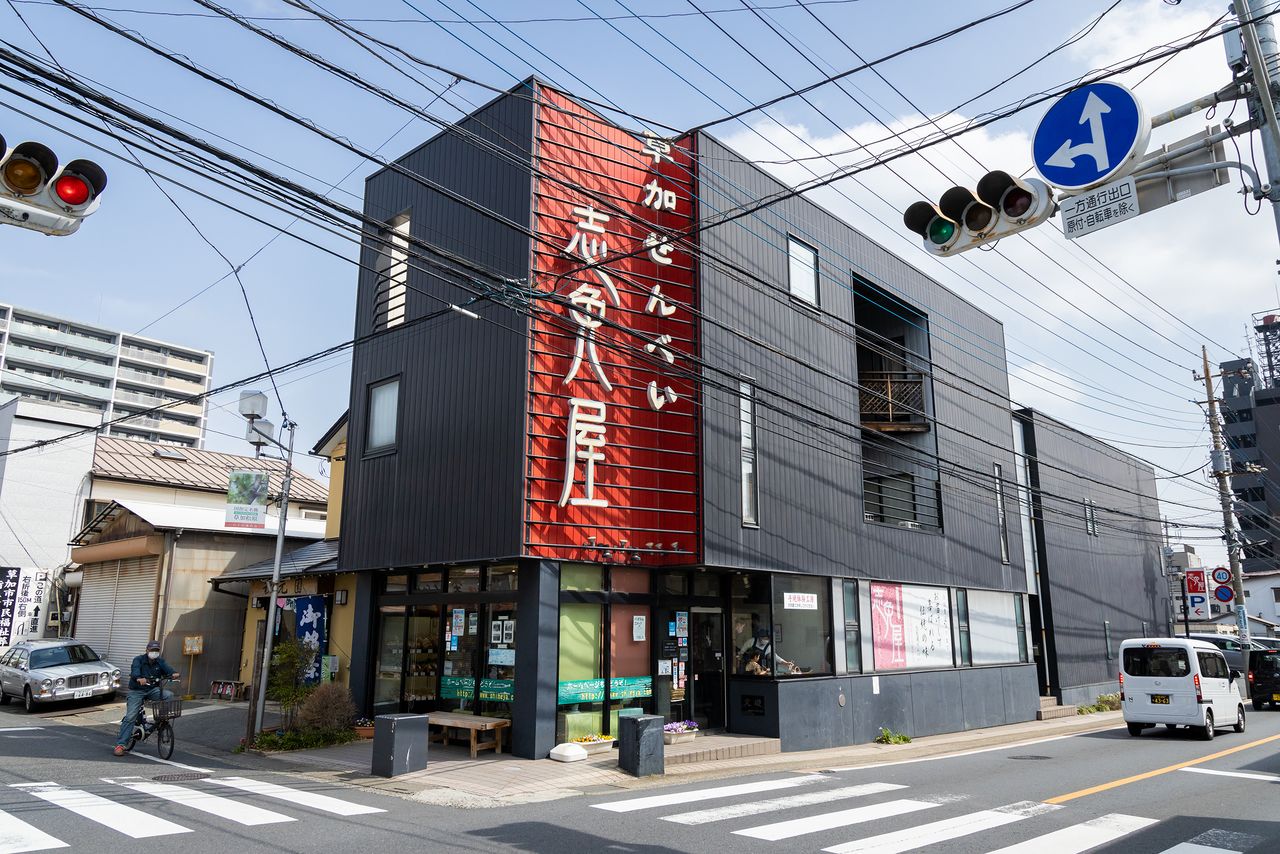 Shimeya stands on a corner of the old Nikkō Kaidō, about a nine-minute walk from Sōka Station on the Tōbu Isezaki Line. 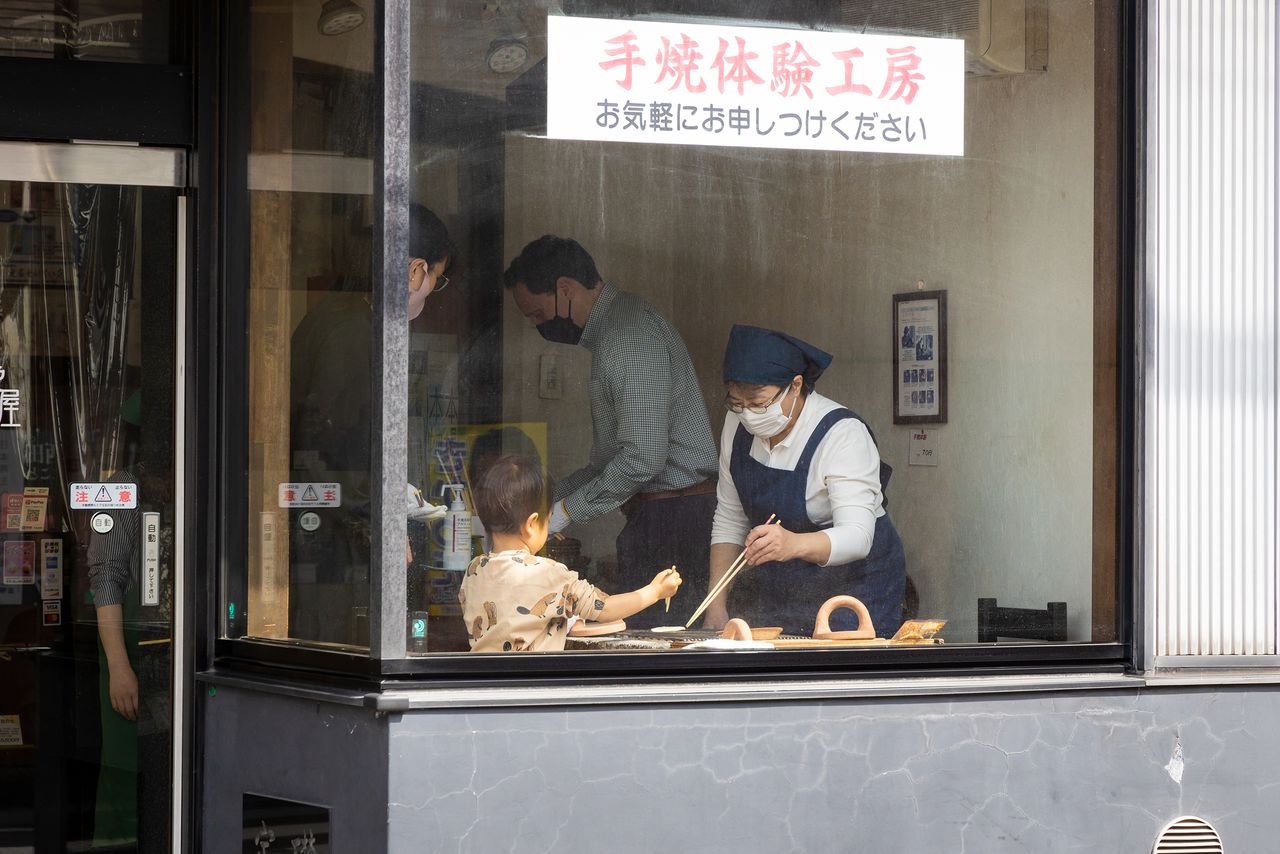 A large window invites curious passersby of all ages to watch the senbei-making action—or to step in and give it a try. 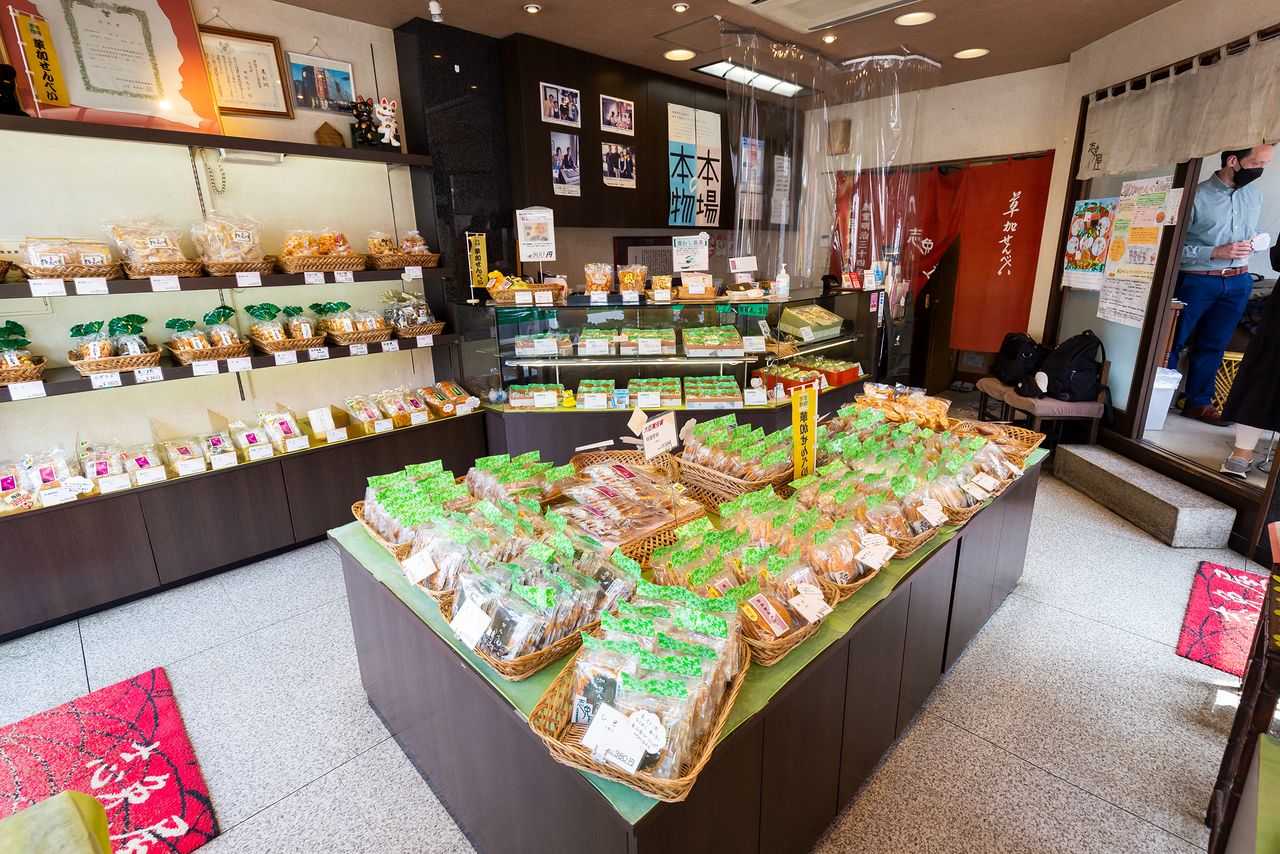 Shimeya offers standard soy-sauce flavored senbei along with other tastes, including roasted sesame seed and shrimp.

Ambitious visitors can grill their own senbei for ¥70 per cracker. Timing is important to successful grilling: turn the cracker too slowly and it cooks unevenly, or use the oshigawara sparingly and the cracker will buckle. The experience offers a window into the skill and hard work required of artisans who have kept the Sōka senbei tradition alive over generations. 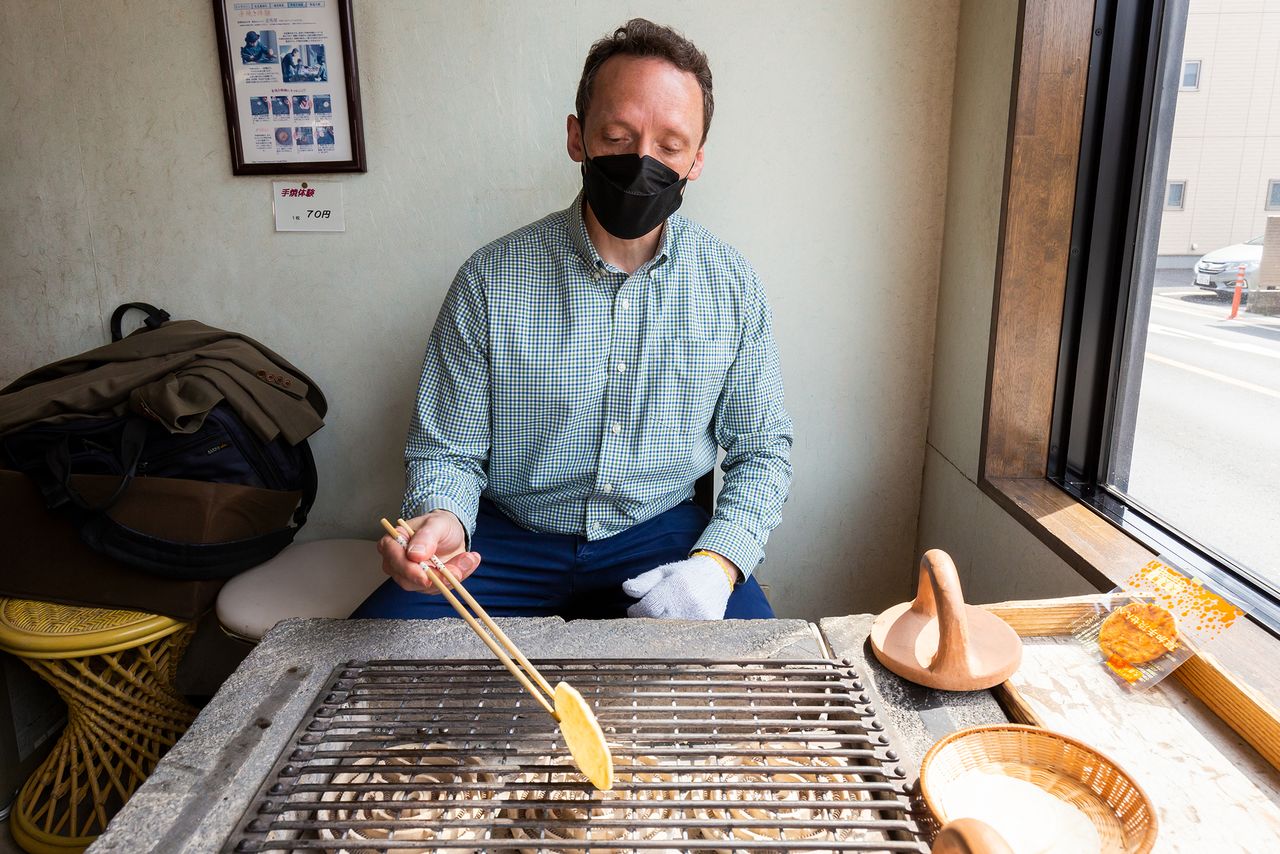 Count to three and turn the cracker to ensure even grilling. 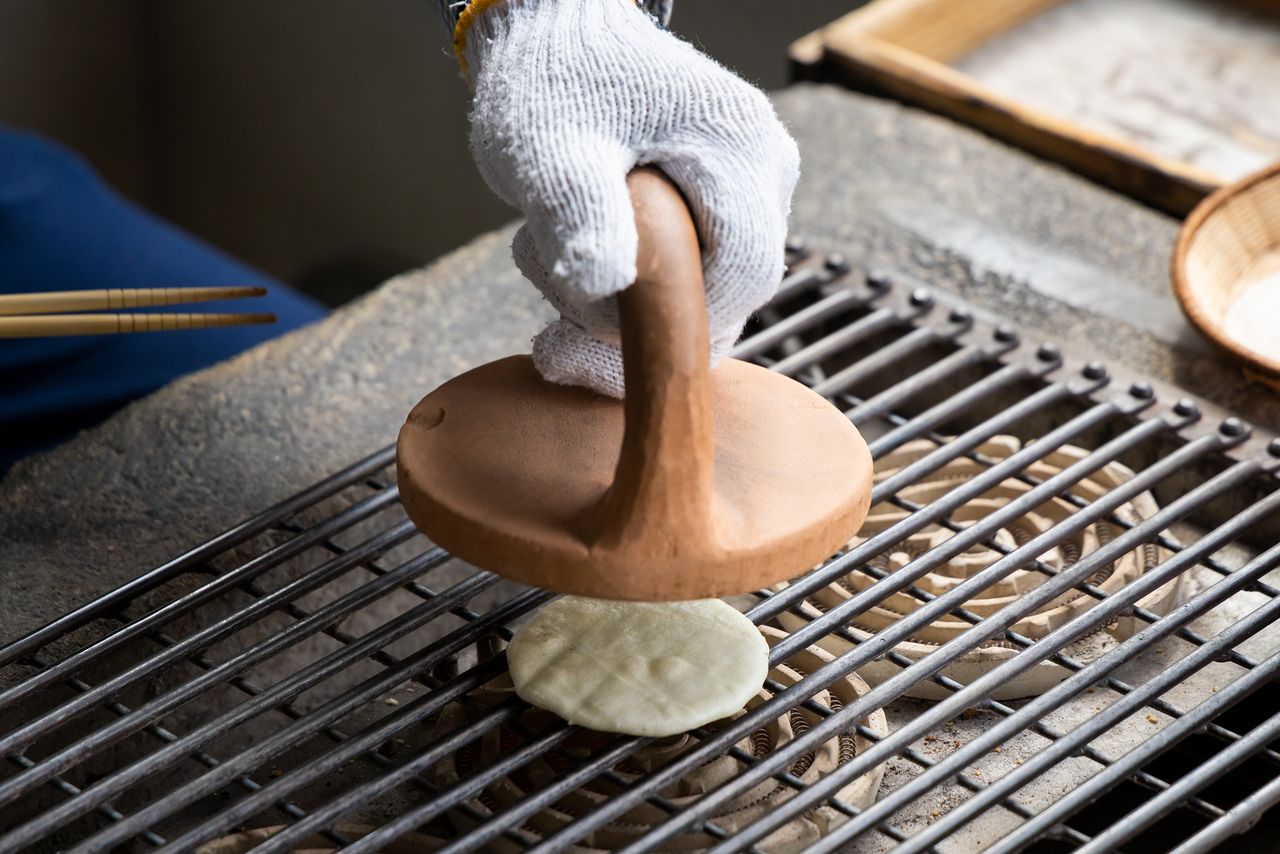 Applying the weighty ceramic oshigawara while the senbei is still soft keeps the cracker flat. 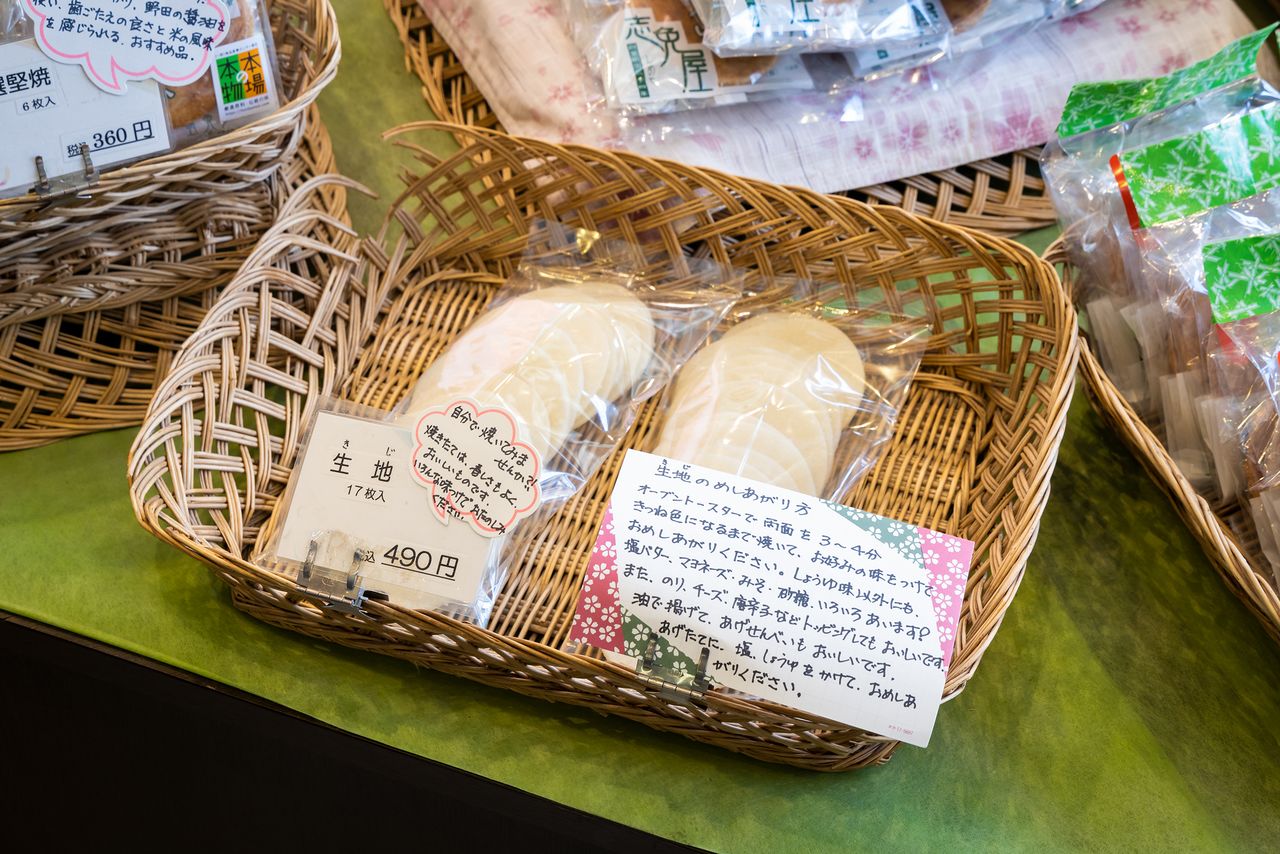 Uncooked senbei are available to customers wanting to make their own original crackers at home.

The final step is to thoroughly coat the still-hot cracker in a soy-sauce tare enrichened with konbu and bonito stock. The soy sauce comes from just up the road in Noda in Chiba Prefecture, a center of production of the seasoning. The trick to a tasty finished product is not to overdo it with the sauce, as too much will result in an overly salty senbei. When finished, customers can eat their cracker while it is still warm and sticky, or leave it to dry for an hour before biting in. 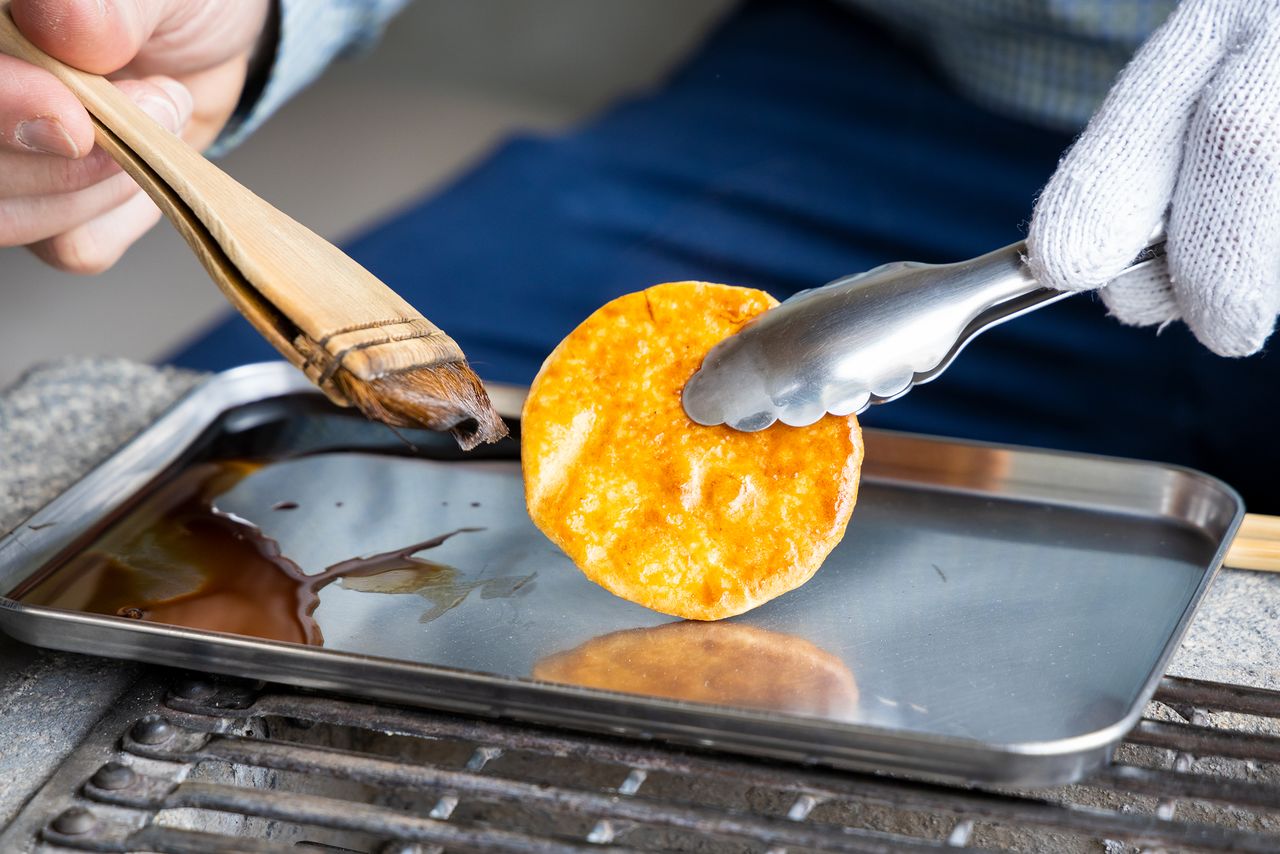 Carefully apply sauce with a brush, making sure to not miss any spots. 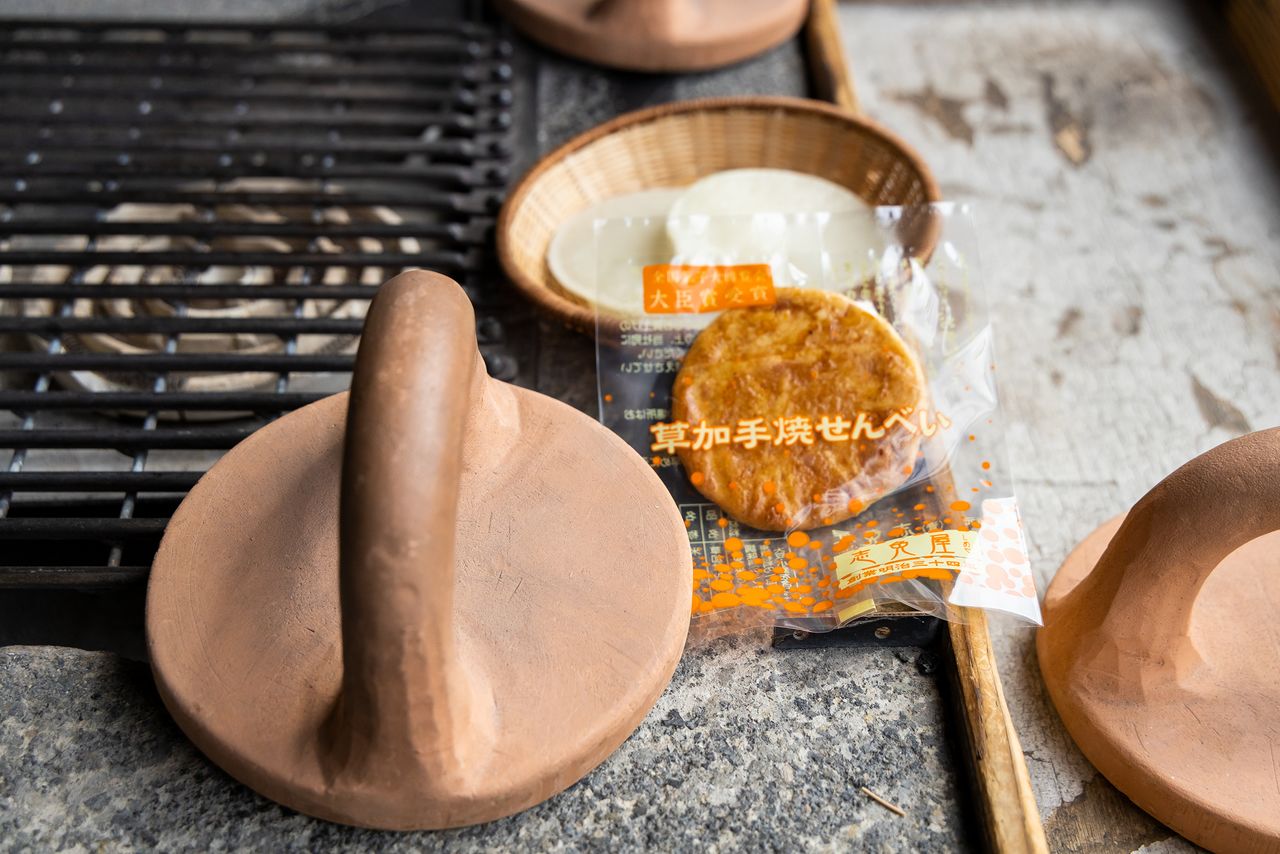 Finished senbei can be eaten in a dedicated spot outside the store or taken home to enjoy later.

Legend attributes the beginnings of Sōka senbei to a woman named Osen who ran a tea shop along the old highway. The shop was famous for its rice dumplings, but Osen was vexed by what to do with her leftover stock, which had a short shelf life. One day, she met a passing samurai who suggested she pound the dumplings flat, dry them in the sun, and sell them as grilled rice cakes. Osen took the stranger’s advice, and much to her pleasure the crunchy treats proved a hit with customers. And the rest is history. 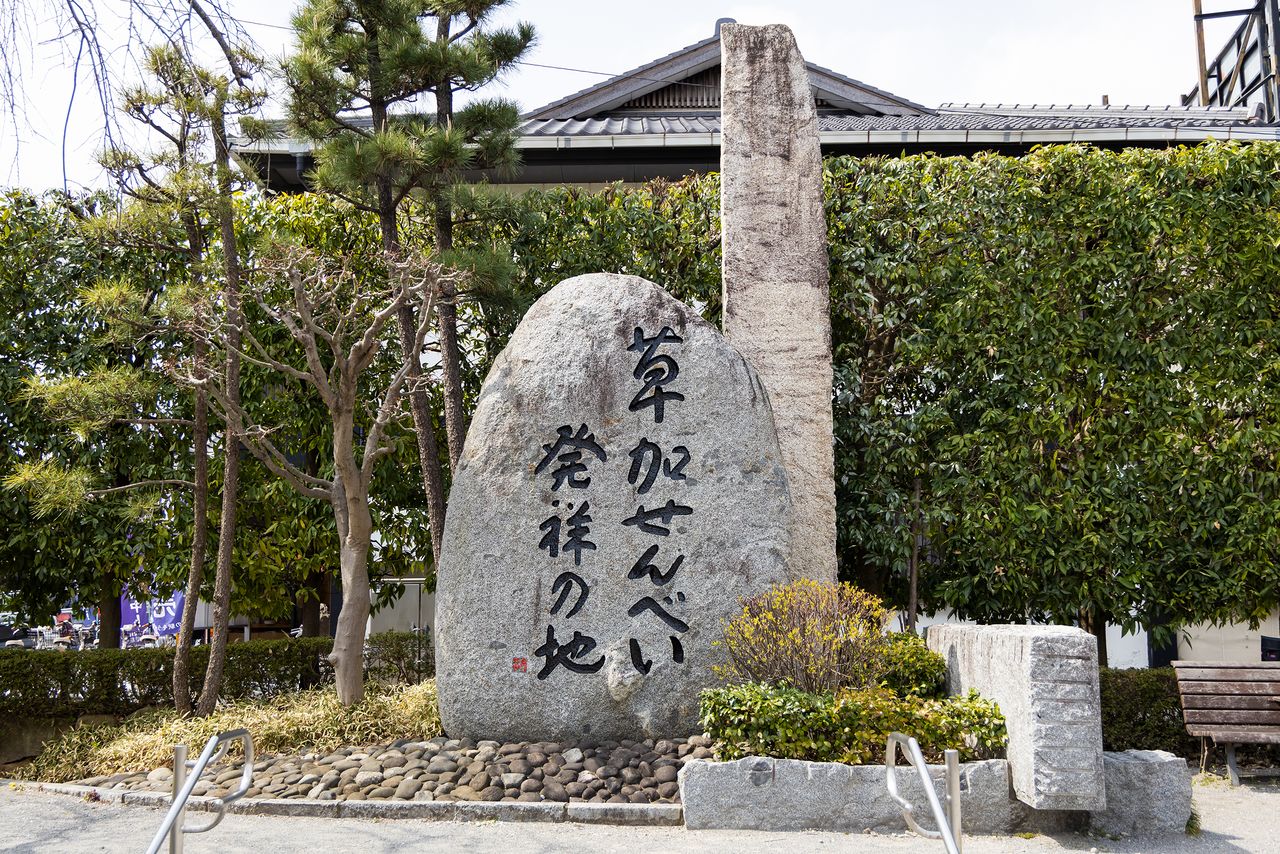 A monument at Osen Park marks the birthplace of Sōka senbei. 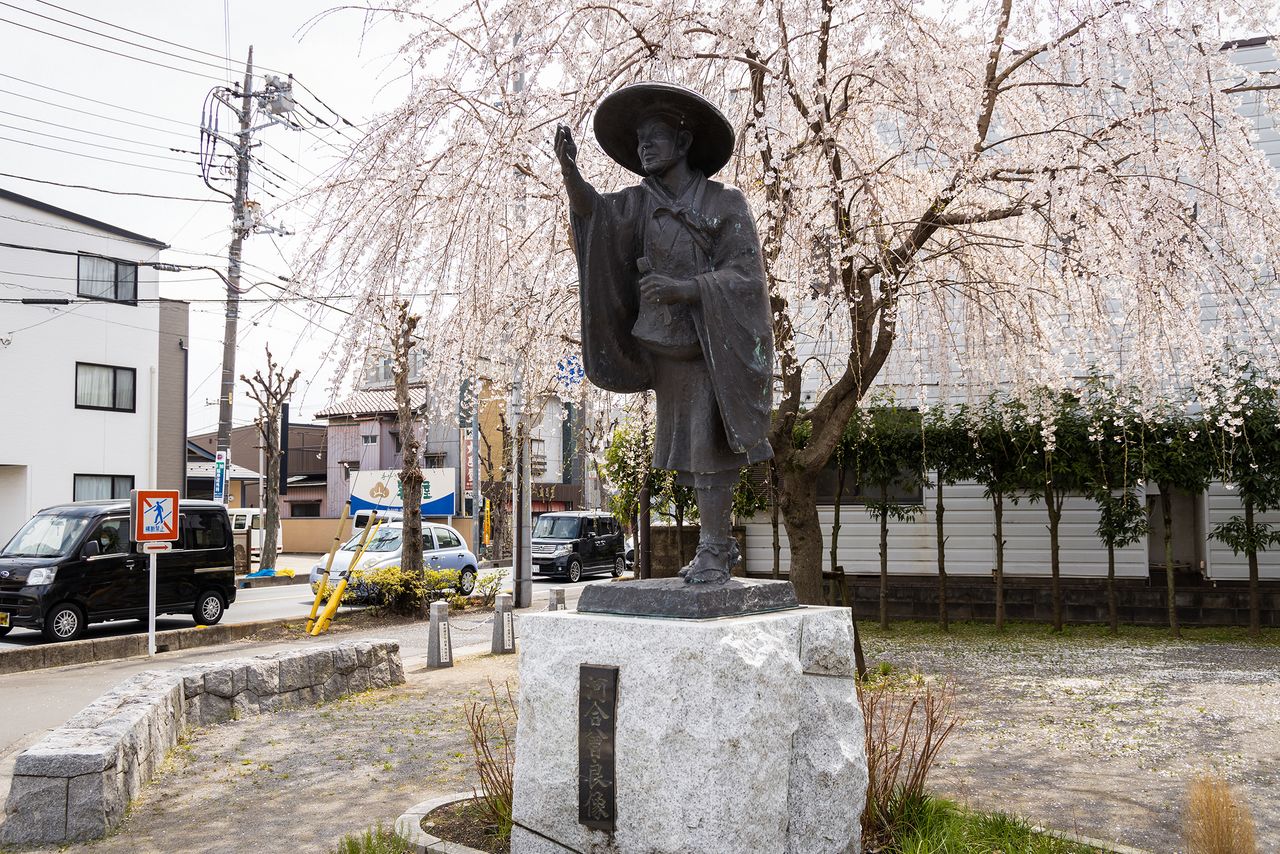 A statue of Kawai Sora, a pupil of Matsuo Bashō who accompanied the poet on his famous journey. 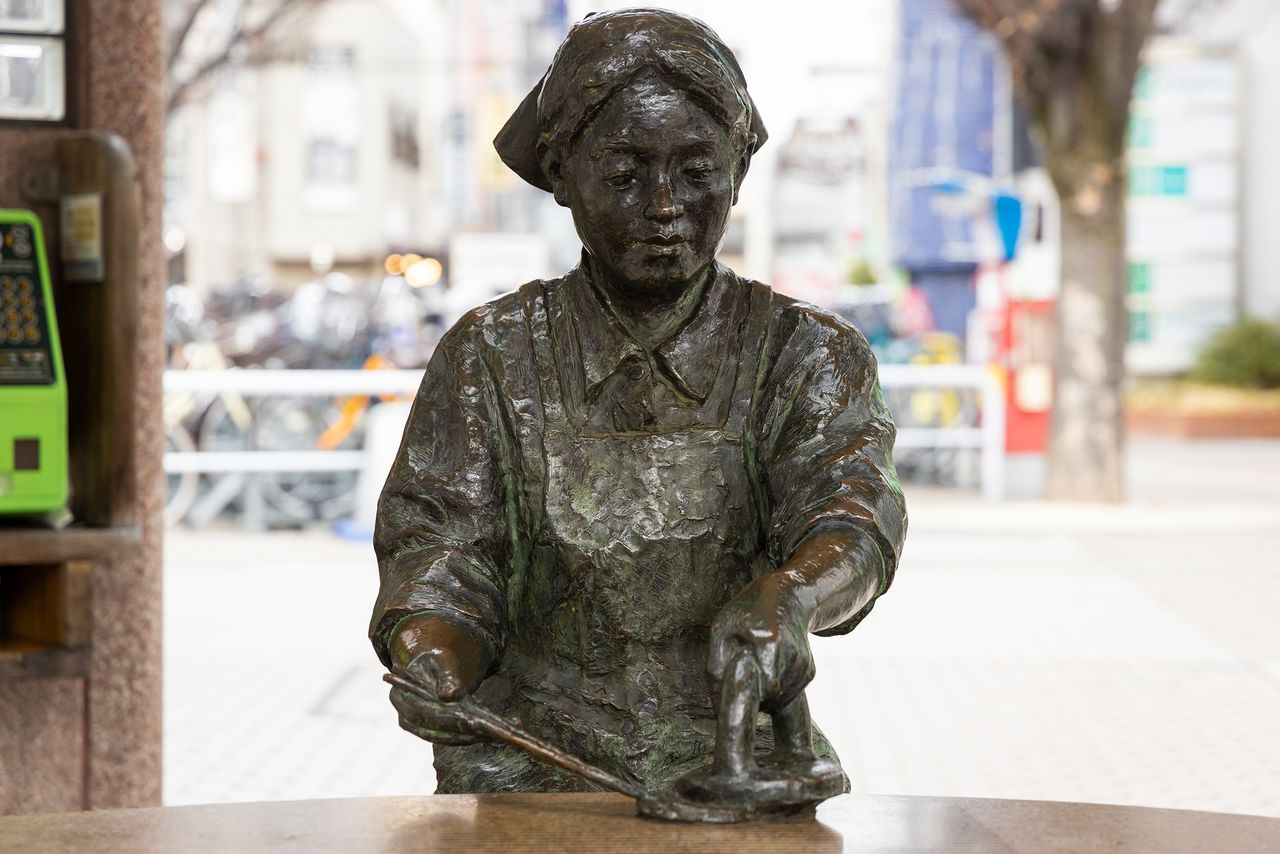 A statue of the legendary Osen stands outside Sōka Station.

While the legend of Osen makes a good tale, Sōka senbei was most probably an outgrowth of local farming customs. In the past, Sōka’s abundant supply of water from its many rivers made it a rich rice-growing area. When cooking rice, locals would pound any that was left over into dumplings, which were then dried and stored for later use. With the construction of the Nikkō Kaidō during the Edo period, Sōka became a post town, and locals began turning the flattened rice cakes into senbei to sell as refreshments to travelers on the road. At first, the crackers were seasoned with salt. But as soy sauce consumption grew from around the middle of the Edo period, it came to be used as the main flavoring senbei. 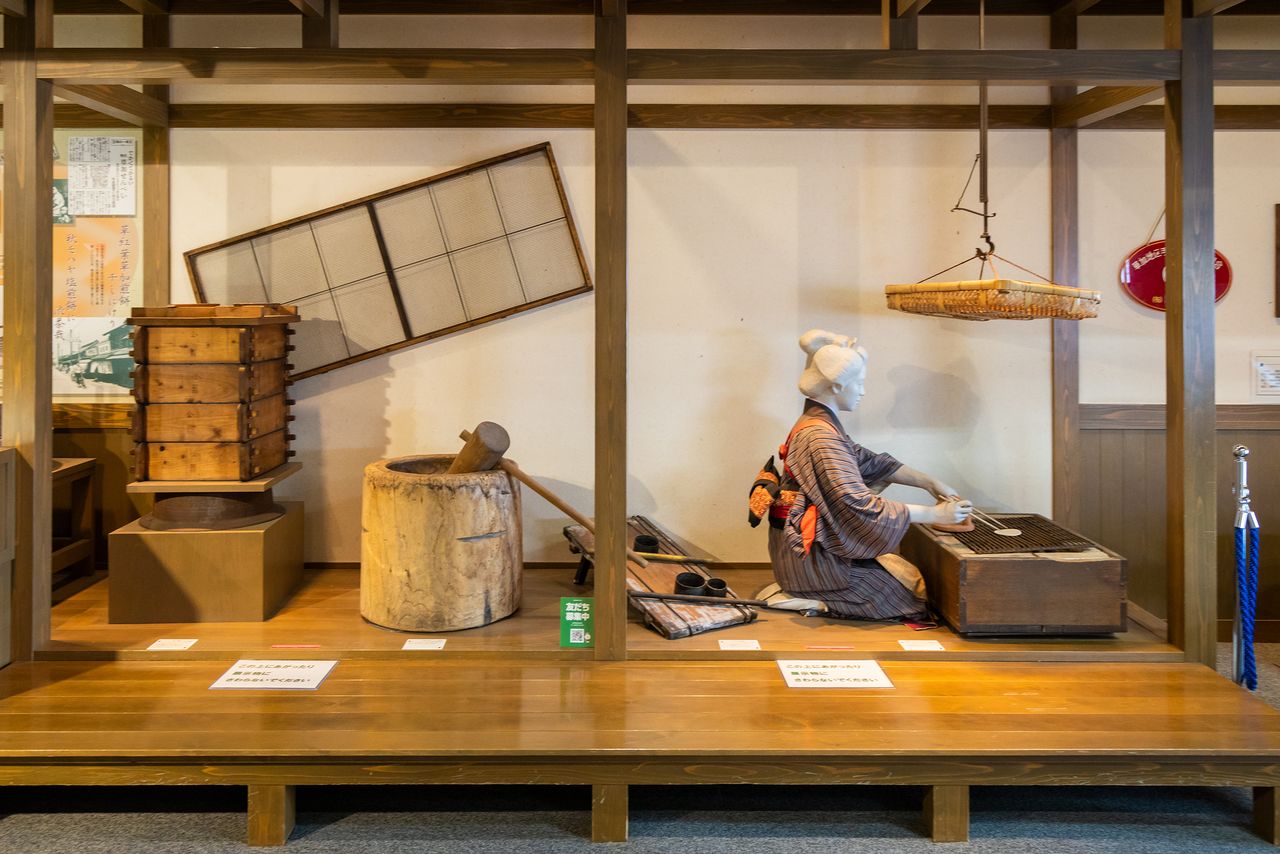 A display at the tourist facility Parisse shows how rice crackers were made during the Edo period. 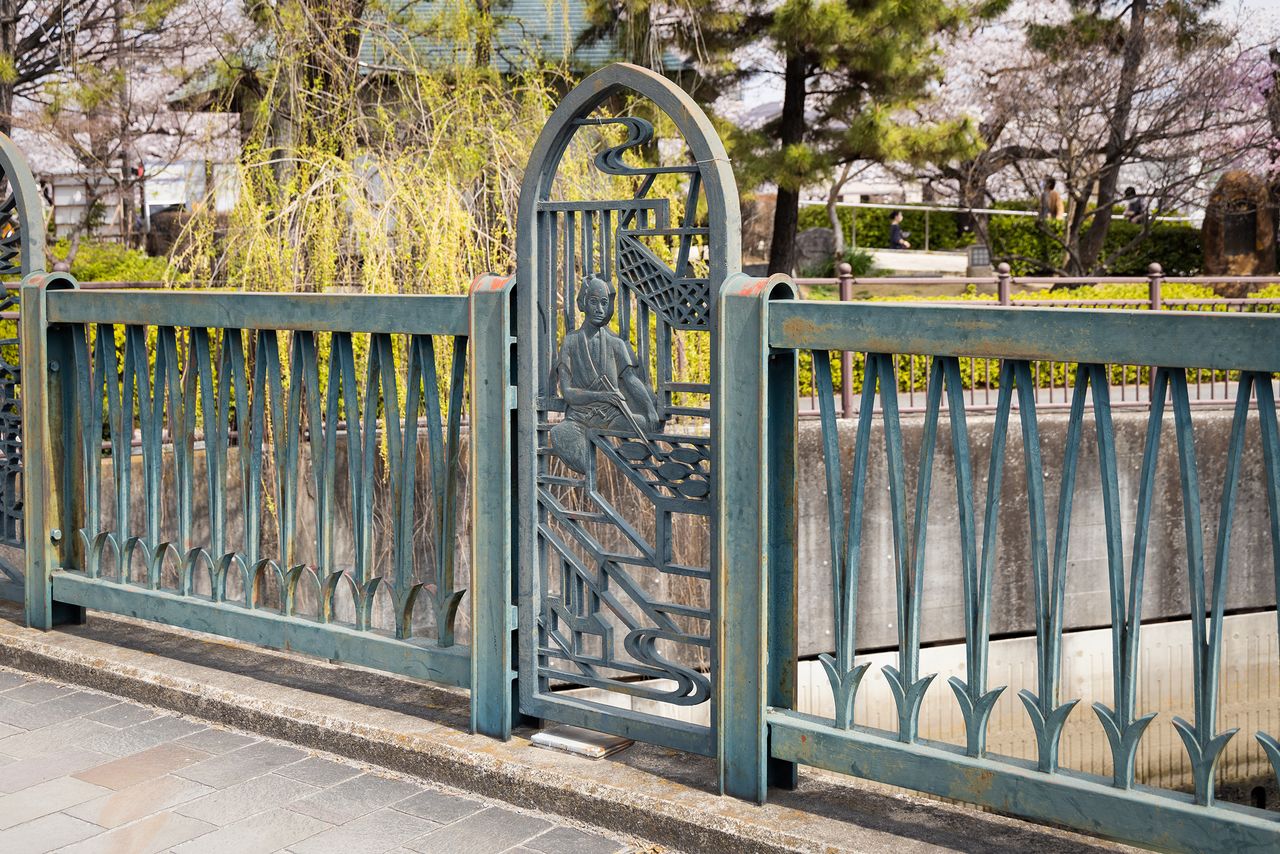 The railing of a bridge spanning the Den’u River, near where Osen is said to have had her shop, features a senbei motif.

Sōka senbei’s big break came during the Taishō era (1912–26), when the crackers were presented to the emperor as a gift, establishing the brand in the public’s mind. It grew in popularity during the postwar years as Japan’s economy boomed and came to be recognized across the country. However, success attracted low-quality knockoffs that damaged the reputation of Sōka rice crackers. Makers have since banded together to bolster the Sōka brand and restore it to its previous luster.

Today, crackers must meet three requirements to be certified as authentic. Sōka senbei must be made entirely from high quality, locally grown uruchi rice. Second, an artisan with over 10 years of senbei-making experience must oversee the manufacturing process. Finally, crackers must be pressed during grilling. 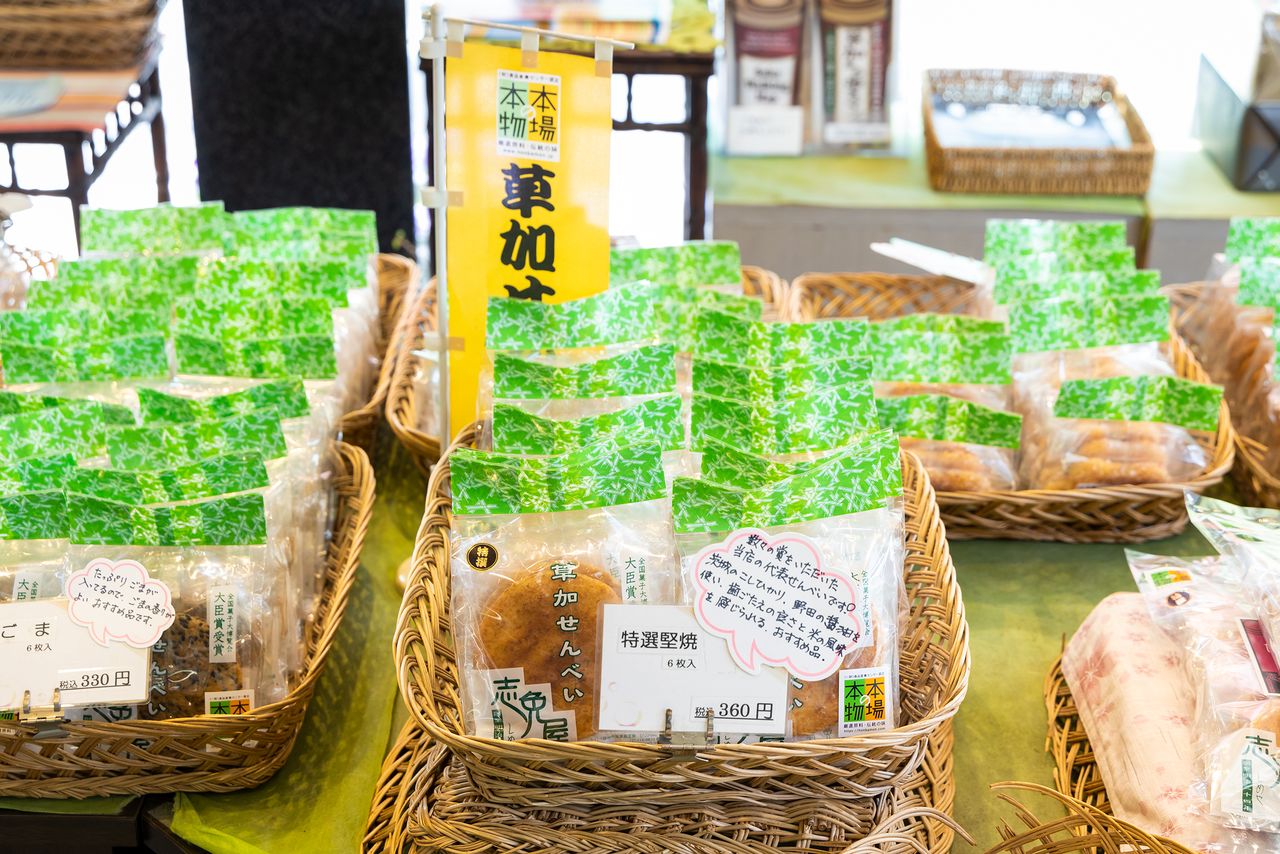 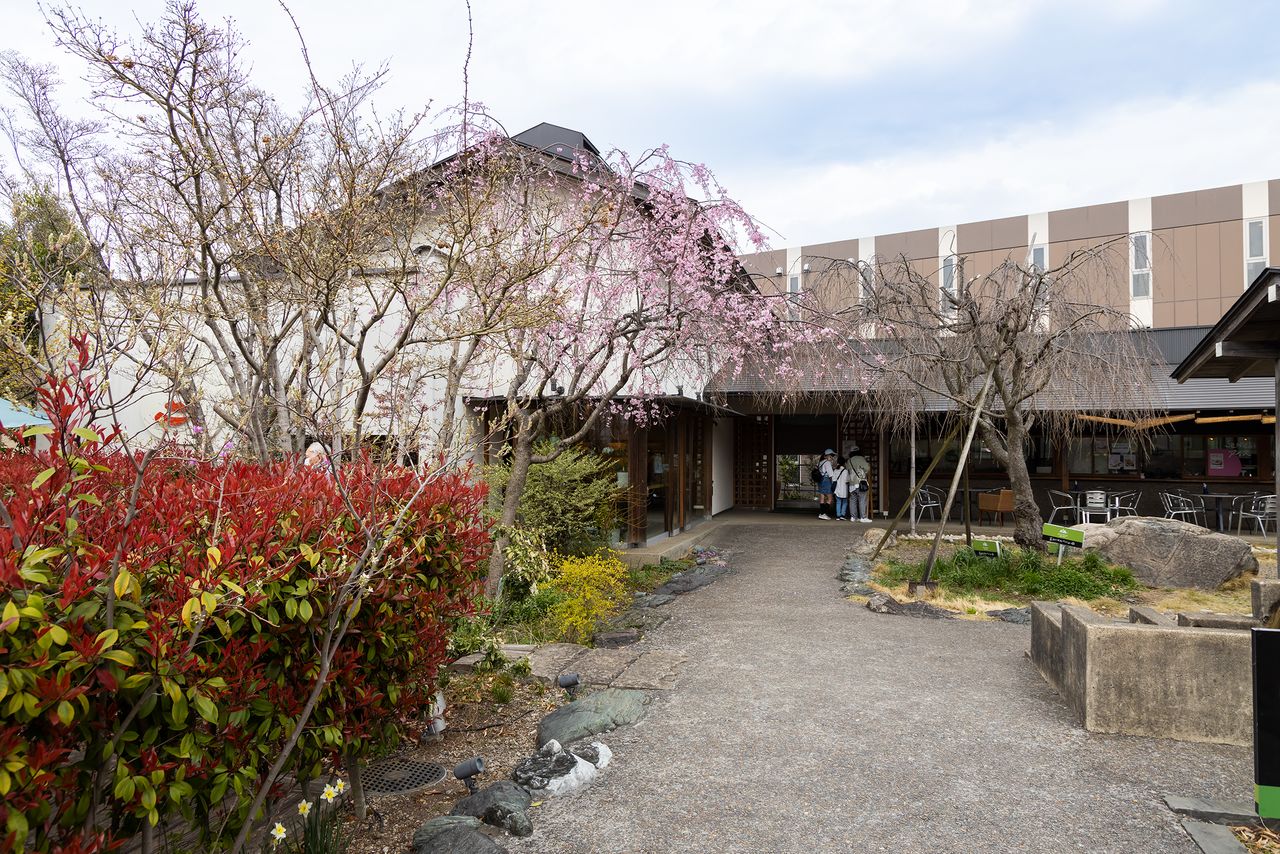 The entrance to the Sōka Senbei Garden. The facility is around a nine-minute walk from Shinden Station on the Tōbu Isezaki Line. 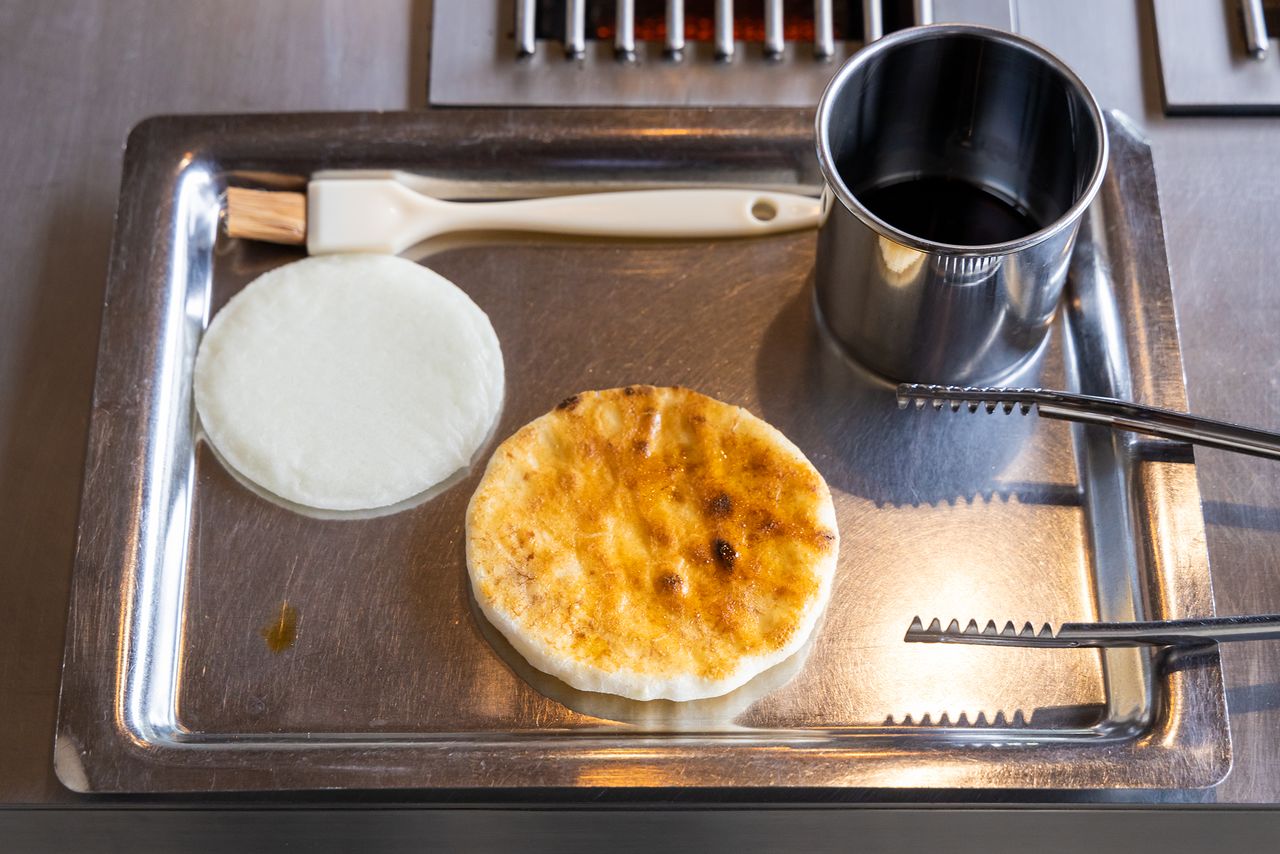 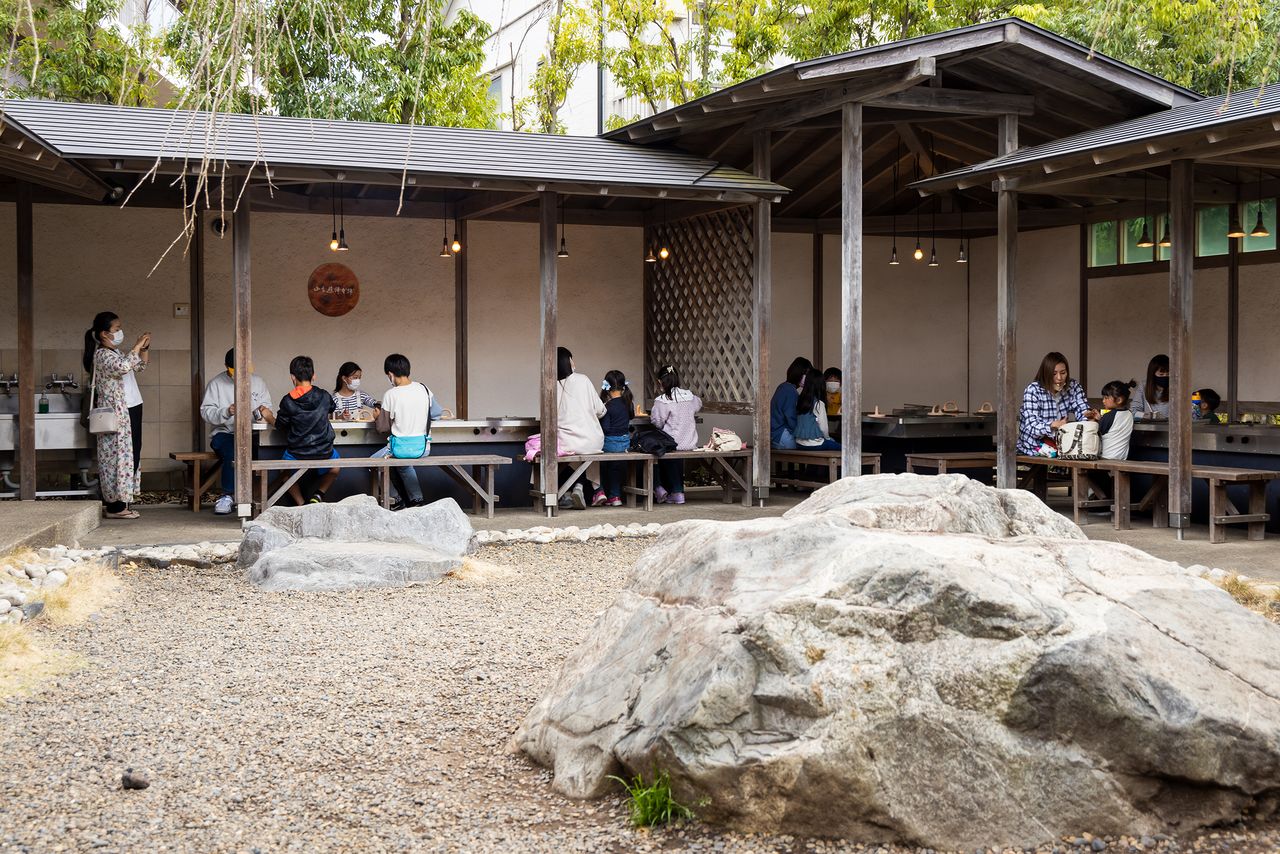 The large outdoor grilling space can accommodate up to 36 people at a time.

After grilling their own senbei, customers can enjoy the crackers with refreshments from the garden’s café, including noodles flavored with the same tare sauce brushed on senbei along with treats like donuts and soft-serve ice cream sprinkles with crushed rice crackers. Yamakō’s shop also has a wide array of offerings, from traditional soy-sauce flavored crackers to chocolate and senbei fusions. 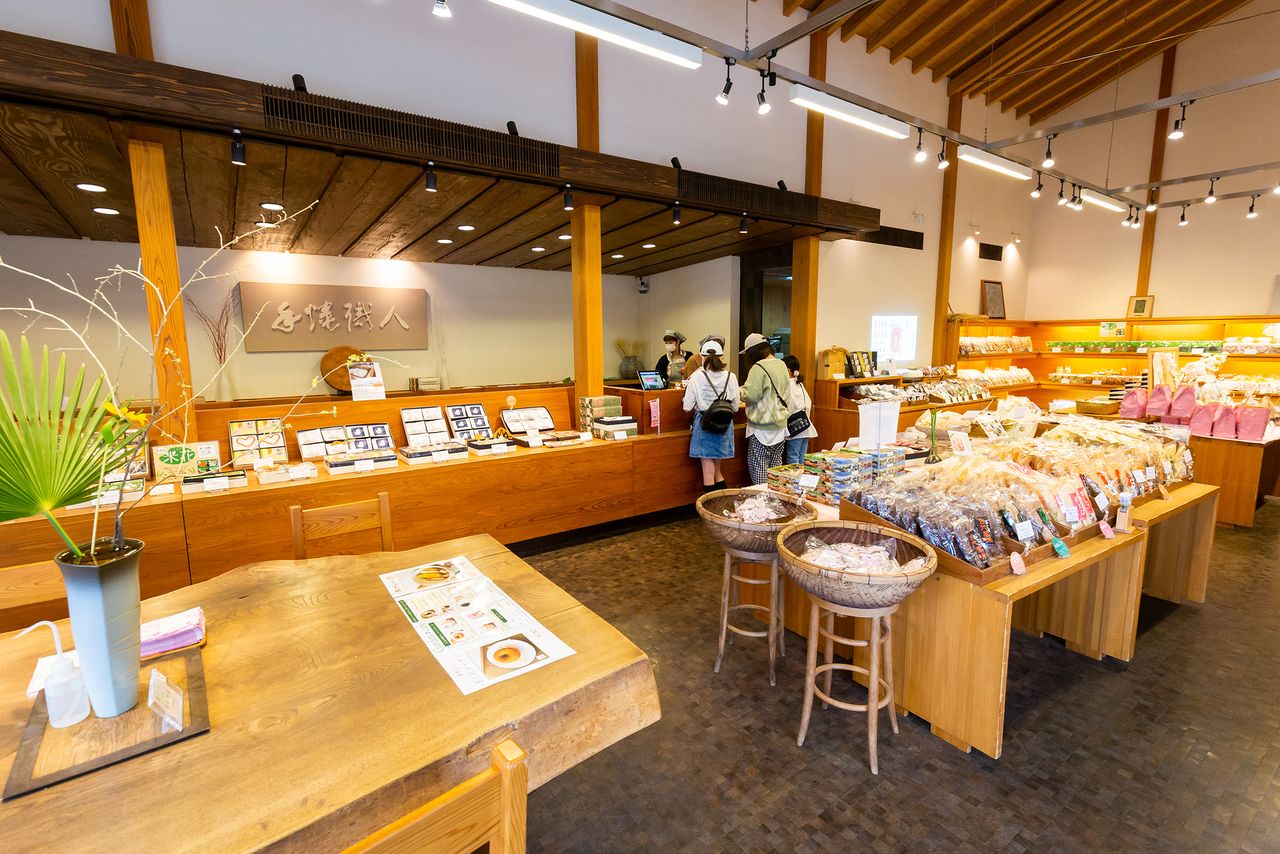 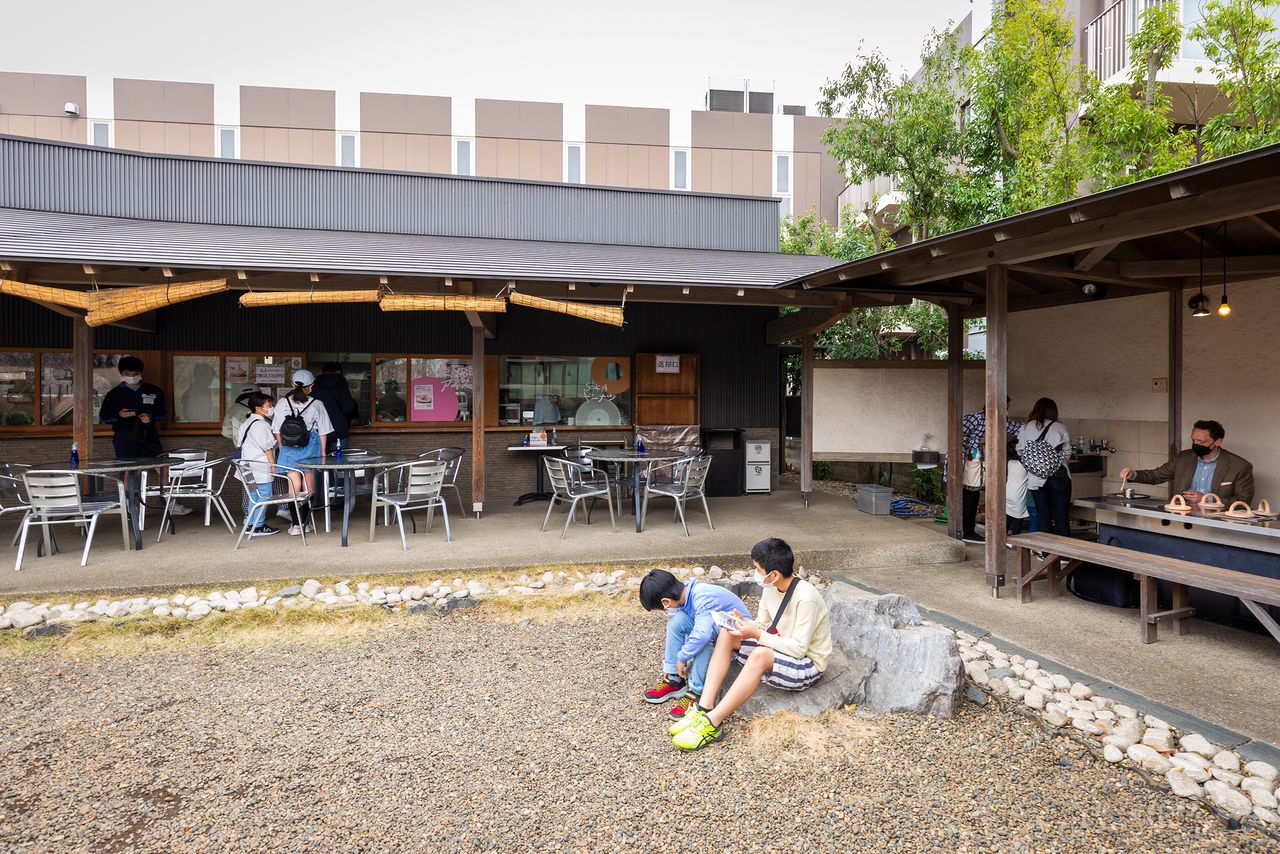 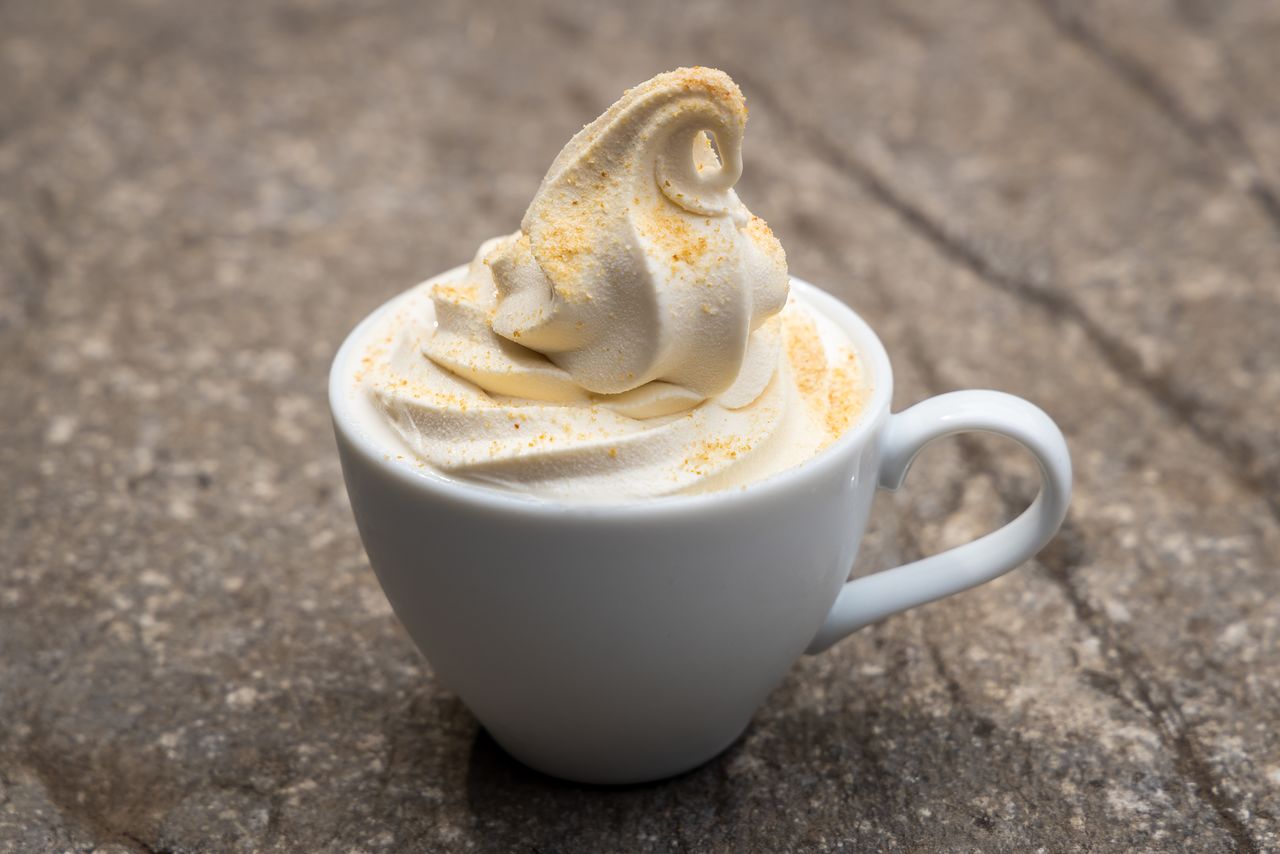 (Originally published in Japanese. Reporting, text, and photos by Nippon.com. Banner photo: A member of the Nippon.com English staff makes senbei at Shimeya.)