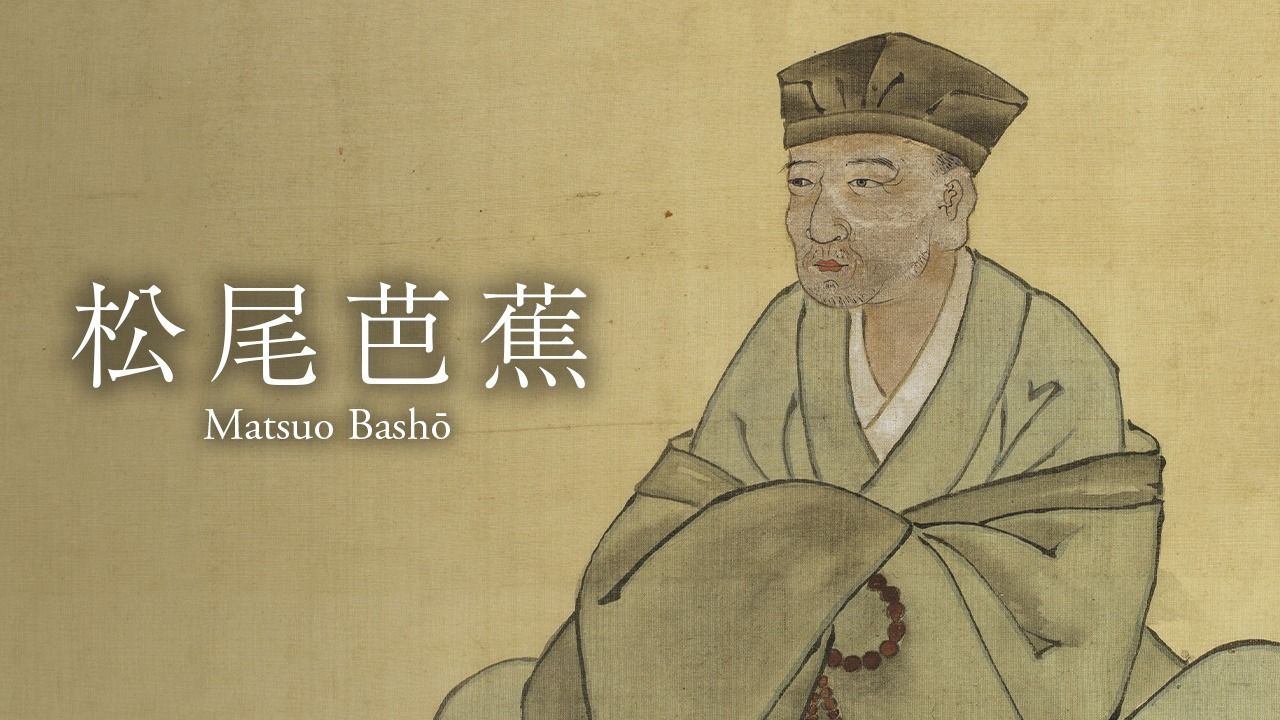 Culture History Travel Mar 18, 2022
Through his poetry and travel writing, born from the desire to seclude himself from society, Matsuo Bashō established himself as one of Japan’s most important literary figures, known for refining what later became known as the haiku.

There was a time when I envied those who had government offices or impressive domains, and on another occasion I considered entering the precincts of the Buddha and the teaching rooms of the patriarchs. Instead, I’ve worn out my body in journeys that are as aimless as the winds and clouds, and expended my feelings on flowers and birds. But somehow I’ve been able to make a living this way, and so in the end, unskilled and talentless as I am, I give myself wholly to this one concern, poetry.

Matsuo Bashō (1644–94) wrote this self-description when he was in his late forties, in the work “Genjūan no ki” (the excerpt above is from Burton Watson’s translation, “The Hut of the Phantom Dwelling”). One might rephrase it, in short, as his assertion that he could only live through literature—namely haikai.

Haikai is an abbreviation of haikai no renga, a lighter, more humorous version of the renga linked verse that emerged from Japan’s elevated waka poetry tradition. The term haikai came to be used more widely to describe individual poems—now commonly known as haiku—and prose with the same spirit. As literacy rates increased in the early Edo period (1603–1868), haikai works became popular among samurai and townspeople.

Bashō was born in 1644 as the second son of the Matsuo family in Ueno, Iga Province (now Iga, Mie Prefecture). The Matsuos had been samurai—although without a stipend—but his father lost that status and moved the family to the castle town of Ueno, where he lived as a farmer. Bashō was originally called Kinsaku, taking the name Munefusa as an adult. In his late teens, he went to work for the Tōdō house, and was chosen as a literary companion for the lord’s son Toshitada (also known by his haikai name of Sengin), developing his own poetic ability through this association. However, Toshitada died young, and in his late twenties, Bashō moved to Edo (now Tokyo).

In Bashō’s youth, the Teimon school of haikai poetry, centered on Matsunaga Teitoku, was in vogue. This style adapted ideas from waka and other classical literature while putting its focus on wordplay. In Edo, however, Bashō encountered the Danrin school, founded by Nishiyama Sōin, which drew on the Taoist text Zhuangzi and often parodied songs from nō drama. It employed word association and fanciful turns of phrase, as well as enthusiastically incorporating customs of the day in poems.

Once in Edo, Bashō took the pen name Tōsei. After jobs including working for the city water department, in his thirties he was able to establish a living as a haikai teacher, which was a popular occupation in the city. He held kukai gatherings in Nihonbashi, polished up clients’ works, and edited anthologies. At this time, he took on disciples like Kikaku, Ransetsu, and Sanpū, who would support him until the end.

Here is an example of one of Bashō’s poems during this period.

It makes a humorous allusion to a well-known verse by Chinese poet Su Shi, which states that a moment on a spring night is worth one thousand pieces of gold. Tōrichō was the main shopping street in Nihonbashi, central Edo, with correspondingly high land prices. In the Danrin style, Bashō’s poem is a jubilant song to the rising city.

Bashō was building a reputation as a haikai teacher when, in 1680, he suddenly retired to the village of Fukagawa on the east bank of the Sumida River. The bashō, or banana tree, planted outside his hermitage by a disciple gave its name first to the dwelling itself (Bashōan) before being adopted by the poet as the pen name by which he would become known to posterity. 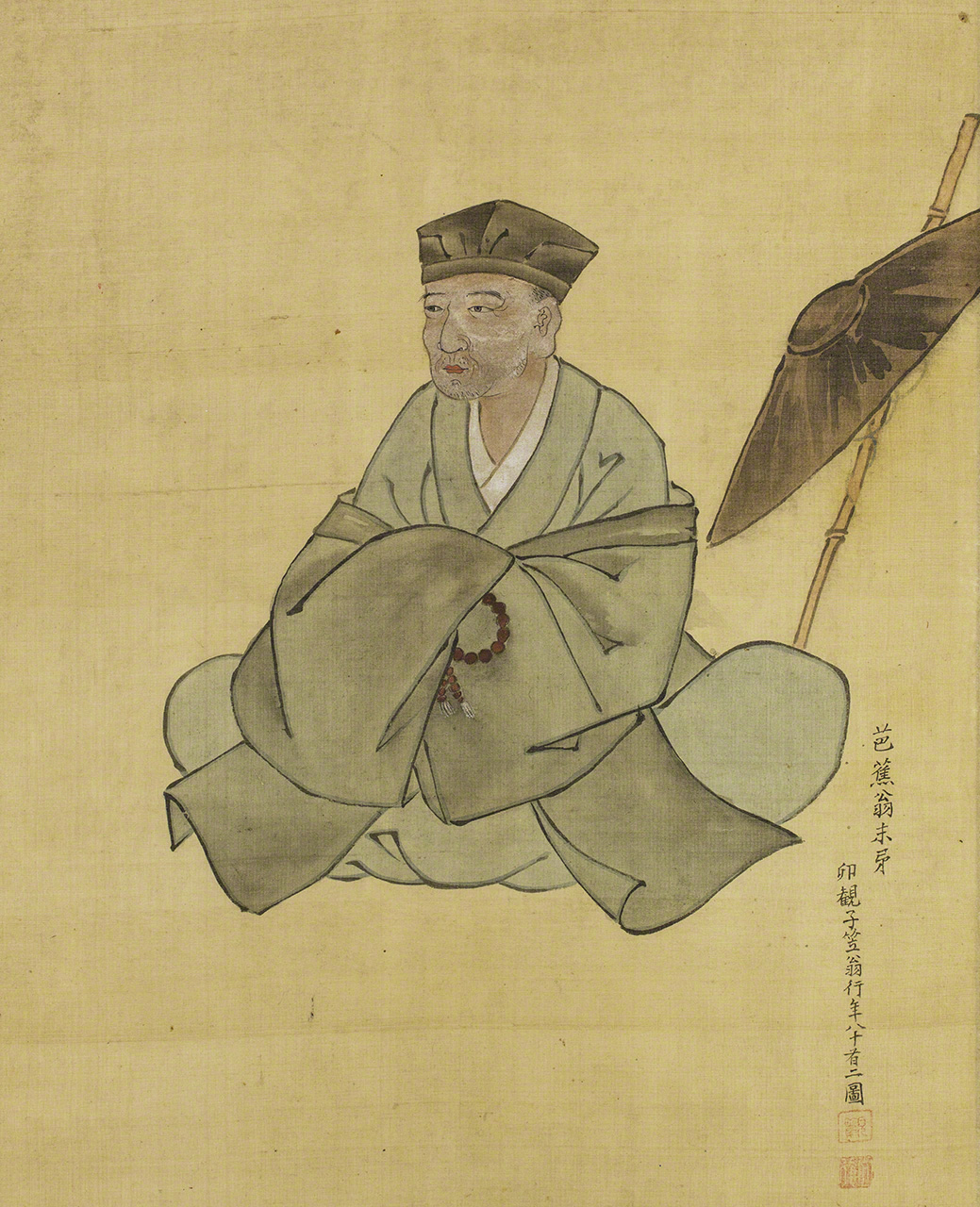 A portrait of Bashō by Ogawa Haritsu, an artist and lacquer craftsman as well as one of Bashō’s pupils. (Courtesy Bashō-ō Memorial Museum)

As the Danrin school declined, haikai entered a period of change and confusion. By leading a reclusive lifestyle, Bashō sought to forge a new path, and he studied Zen under the priest Butchō. Around the time he entered his forties in 1684, he began a series of journeys, which he documented in journals, as listed below. (All English titles are taken from the translations published in 2020 by Steven D. Carter in Matsuo Bashō: Travel Writings.)

From the autumn of 1684 to the following spring, Bashō traveled along the Tōkaidō highway from Edo to his hometown of Iga, also visiting Kyoto, Ōtsu, and Atsuta Shrine along the way.

Kashima mōde (A Pilgrimage to Kashima)

In 1687, Bashō went to Edo and Kashima and back to enjoy tsukimi (moon viewing).

From winter 1687 to the summer of the following year, Bashō first went to Iga, before walking around the Kansai area with Tsuboi Tokoku, including going to see the famous cherry blossoms at Yoshino.

Sarashina kikō (A Journey to Sarashina)

Bashō set off from Nagoya with Ochi Etsujin in 1688 to see the autumn moon at Sarashina before returning to Edo.

Oku no hosomichi (The Narrow Road Through the Hinterlands)

From the spring to the autumn of 1689, Bashō traveled from Edo with Kawai Sora through the northern provinces of Ōshū and Dewa and then west through Hokuriku before arriving at Ōgaki in what is now Gifu Prefecture. 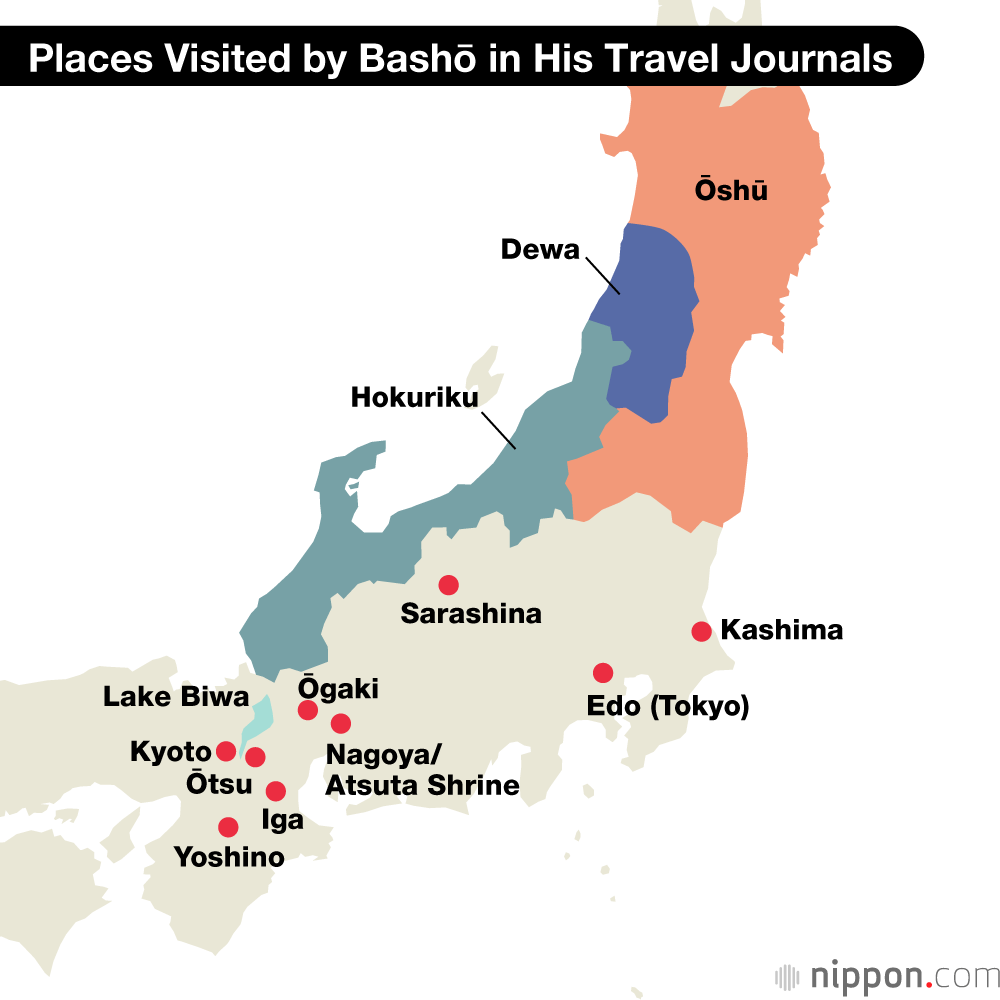 Bashō’s many journeys in later life were partly inspired by a wish for ascetic training through pilgrimages, far from society. He also wanted to see for himself the many locations made famous through classical literature and follow in the footsteps of poet monks like Nōin, Sōgi, and especially Saigyō. Spreading his haikai style through the country must have been another of his motivations.

The following poem was composed when he started the journey to be documented in Bones Bleaching in the Fields.

Unpacking the poem within its context, one might paraphrase it as, “As I set off on a journey, I imagine my bones bleaching in the open, and the autumn wind chills me.” Yet, despite the possibility of death on the road, his urge to roam is such that he cannot hold himself back.

After the journey around northern Japan and west through Hokuriku that was the basis for The Narrow Road Through the Hinterlands, Bashō spent around two years in the Kansai region. This was where he wrote “The Hut of the Phantom Dwelling.” Then he returned to Edo, where he remained for two and a half years before traveling again to Iga in 1694. That summer he passed through Kyoto and Ōtsu, while in the autumn he headed through Nara to Osaka. He died in a rented room on Osaka’s Midōsuji street on November 28, 1694. The cause of death seems to have been a stomach ailment.

Bashō did not marry and had no children. There is no firm evidence for the suggestion that a woman called Jutei was his lover. In the last five years of his life, one can sense that Bashō’s style was influenced not only by classical literature in the form of waka, nō songs, and kanshi (Chinese poetry) but also by an understanding of Zen Buddhism and Zhuangzi. He advocated and instructed his followers in the aesthetic concepts of wabi, which sees virtue in renouncing material satisfactions for an honorable poverty; sabi, which appreciates a faded or withered form of beauty; and karumi, which finds classical elegance in the everyday or vulgar.

In linked-verse forms of haiku, Bashō turned away from creating links through kotobazuke (word association) and kokorozuke (extension of the scene or narrative) to develop the technique of nioizuke, literally “scent link,” whereby connections are made based on mood, rather than reason. He espoused using this technique in combination with karumi. In Bashō’s later years, he took on disciples such as Kyorai, Jōsō, Kyoriku, and Shikō. From the middle of the Edo period, his style of haikai became mainstream, and he grew to be revered for his pivotal role in the genre.

Bashō wrote this poem shortly before his death in Osaka. (Many readings take the final word as kakemeguru, but it is likely to be kakemawaru based on the writings of his disciples at the time.) It alludes to a poem from centuries earlier by Saigyō, which contrasts a past spring in Naniwa with the present in which the wind blows through the dead leaves of reeds. At the time of Bashō’s poem, it was winter, and Naniwa was the former name for Osaka, so he apparently wanted to see the same landscape of parched reeds as in Saigyō’s poem. His sickness, however, prevented him, and only his dreaming spirit left his body to wander the withered fields. The poem demonstrates symbolically how Bashō was forever following after Saigyō, even until death.