Culture Sep 19, 2018
Tsukimi means nothing more than “looking at the moon.” But the Japanese custom of holding special moon-viewing parties, in autumn in particular, dates back over a thousand years.

Autumn moon viewing, or tsukimi, has long been a popular pastime in Japan. Traditionally it was a way of expressing gratitude for a good harvest and hopes for similar bounty in the future. On the old lunar calendar, the full moon appeared on the fifteenth night (jūgoya) of each month. The best night in the year for observing the celestial body is said to be the fifteenth night of the eighth month of the lunar calendar, known as jūgoya no tsukimi. (In 2019, this is September 13.)

According to traditional reckoning, autumn was from the seventh through the ninth months. The exact midpoint of the season, the fifteenth night of the eighth month, was called chūshū (mid-autumn), so another name for the full moon that night is chūshū no meigetsu (the mid-autumn moon).

The custom of jūgoya moon viewing began in China during the Tang Dynasty (618–907) and spread to Japan thereafter. The aristocrats of the Nara (710–794) and Heian (794–1185) periods enjoyed moon-viewing parties at which they played music and composed poetry. By the Edo period (1603–1868), tsukimi had come to be a popular practice even among commoners, and was closely associated with autumn festival traditions involving thankful offerings of freshly harvested rice to the gods.

The place where people gather to view the moon, such as a veranda or window, is known as the tsukimidai. It is traditionally decorated with such offerings as rice dumplings called tsukimi-dango and produce like taro as well as susuki, or pampas grass. There may also be special displays associated with the tea ceremony or ikebana.

These round rice dumplings represent the full moon. The shape is also considered to be auspicious and eating tsukimi-dango is said to bring health and happiness. One tradition is to display 15 dumplings to match the fifteenth night, while another calls for 12 dango, one for each of the months. 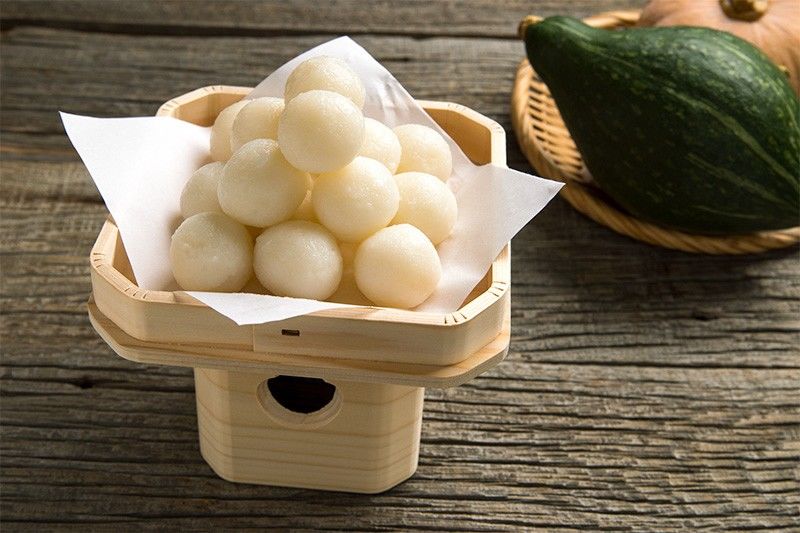 Five or ten plumes of pampas grass on display represent the bounty of rice plants, which they resemble. 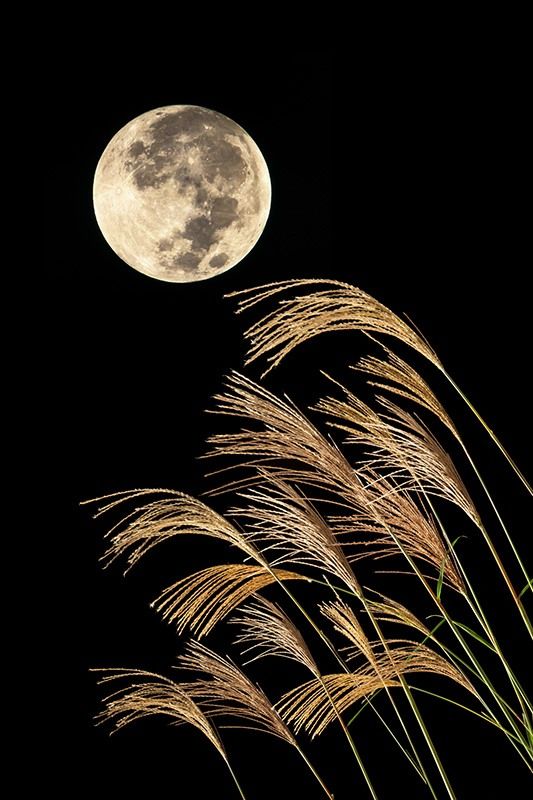 Pampas grass and the full moon.

As taro bulbs produce many shoots, they are associated with a large and prosperous family.

Seasonal produce like edamame soybeans, chestnuts, and pumpkins are also offered during the moon-viewing festival.

The Rabbit in the Moon

In Japan, instead of the Man in the Moon, the moon is said to present the image of a rabbit pounding mochi rice cakes with a mallet. According to one theory, this is based on a Buddhist tale that later became well known in Japan. Another theory is that it is a play on the word mochizuki, meaning “full moon,” which also sounds like the word for pounding mochi. 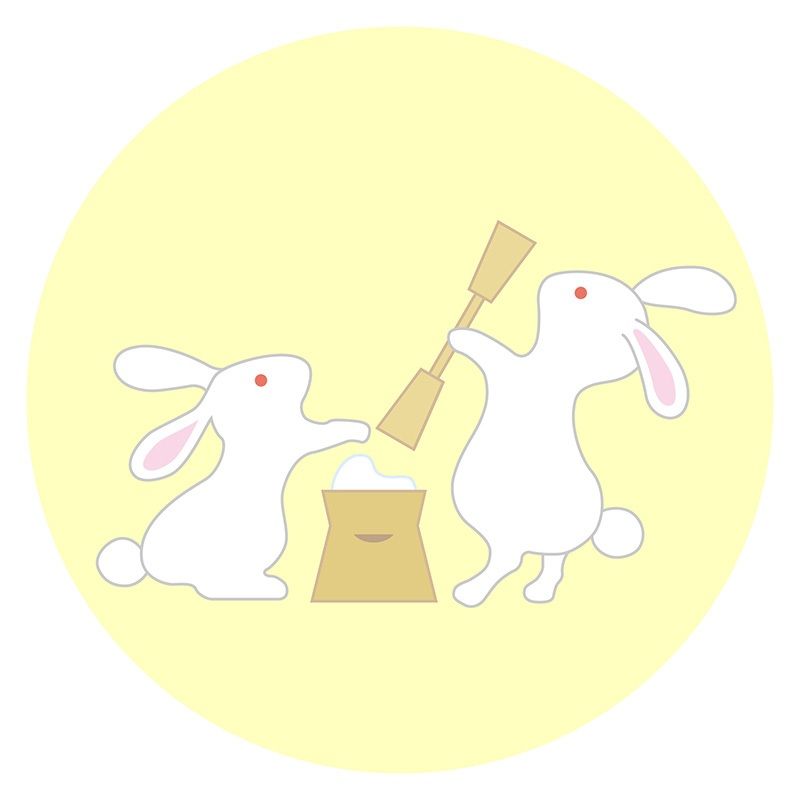 Pounding mochi on the moon.

The word tsukimi has also taken on another meaning. The visual similarity between the round moon and an egg yolk has led to it being used to describe dishes topped with egg, raw or fried, and includes such fare as tsukimi hamburgers, soba, curry, and ramen. 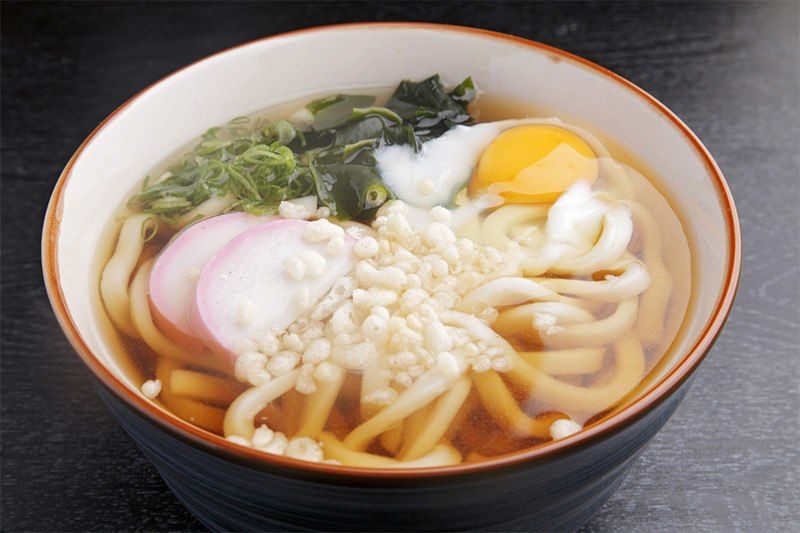 A number of moon-viewing events will be held from late September through the following month at temples, shrines, gardens, and commercial facilities across Japan. Below are a few venues.

The tower will be specially lit up, and the 600-step outer staircase that leads to the main deck will be open until 10:00 at night. 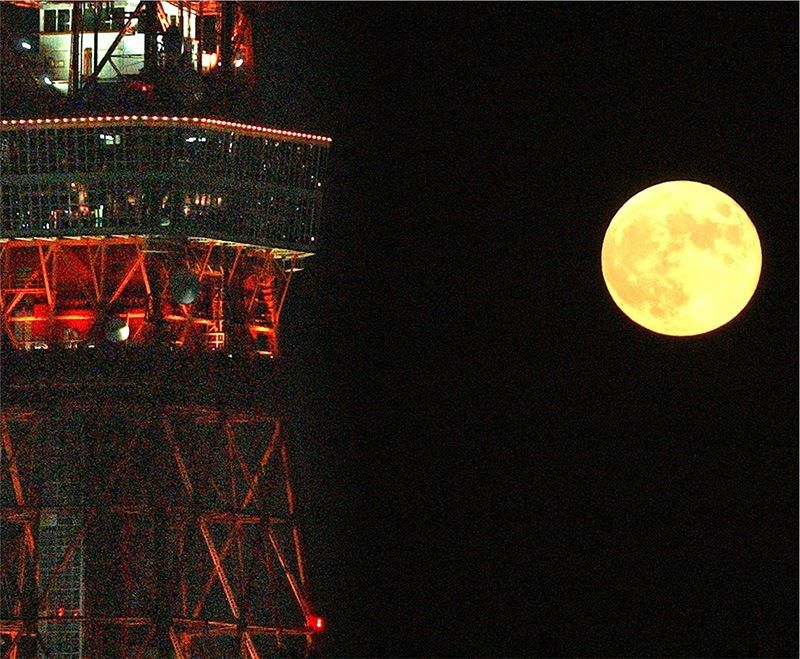 The mid-autumn moon lights up Tokyo Tower. During the moon-viewing festival, visitors to the tower’s observation deck can enjoy traditional tsukimi decorations like pampas grass and rice dumplings. (© Jiji)

The famous castle in Hyōgo Prefecture will hold a moon-viewing event featuring taiko drumming and other artistic performances. There will also be tsukimi-dango, local oden, and sake available to buy, along with places to drink tea and take in astronomical views via telescope.

A number of moon-viewing events will be held at Tokyo Skytree, including live jazz performances.

This garden in Yokohama will extend its opening time for events in late September and light up its historic buildings. There will also be different music and dance performances each day at the Rinshunkaku villa.

Ise Shrine in Mie Prefecture will hold a moon-viewing event with poetry readings and performances of traditional music.

(Banner photo: Tsukimi-dango and susuki pampas grass on display in front of the full moon. © YsPhoto/Pixta.)