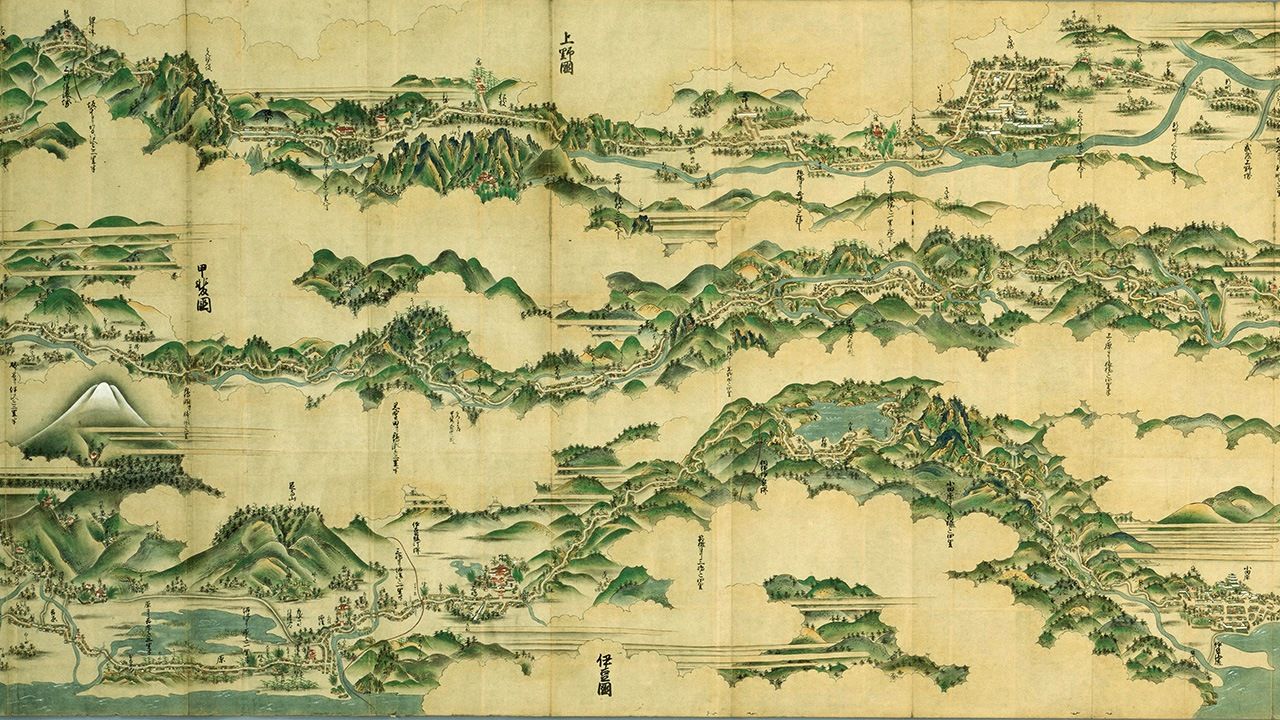 The Five Highways and Other Routes Across Edo-Period Japan

History Guide to Japan Apr 21, 2021
When Tokugawa Ieyasu took control of Japan, he embarked on a project of road improvement intended to highlight Edo’s position as the new center of the country, and to provide the means for rapid military deployment to defend that position if necessary.

Japan’s most famous highway, the Tōkaidō, was an essential transportation route between Edo (now Tokyo) and Kyoto during the Edo period (1603–1868). While there was previously a road linking west and east from over 1,000 years ago, the highway became associated with Tokugawa Ieyasu, who ordered considerable expansions and improvements two years before he received the title of shōgun in 1603.

His initial aim was to put in place a system of high-quality roads centered on Edo that would allow for the rapid deployment of military forces to subjugate any daimyō that fomented rebellion. The work on the Tōkaidō was the first stage of this plan. Its name means “Eastern Sea Road,” as it ran along the Pacific coast for much of its length.

The Nakasendō, or “Central Mountain Route,” joined Edo and Kyoto on a route farther inland. Ieyasu’s 1602 licensing of Mitake-juku, in what is now Gifu Prefecture, as a Nakasendō post station shows that this highway was being improved at the same time. The year also saw the start of upgrades to the Kōshū Kaidō between Edo and where it joined the Nakasendō in modern Yamanashi Prefecture.

The main picture for this article above shows the three highways of the Nakasendō, Kōshū Kaidō, and Tōkaidō lined up in a row. At Katsunuma on the Kōshū Kaidō (to the upper right of the peak of Mount Fuji in the picture), there was an important battle in 1868, around the time of the Meiji Restoration. A unit led by Kondō Isami, loyal to the shōgun, made a desperate but ultimately unsuccessful struggle to prevent forces of the new Meiji government headed by Itagaki Taisuke from entering Edo.

The post station Utsunomiya-shuku on what became the Nikkō Kaidō was licensed in 1602, and highway improvements were extended to Nikkō (in today’s Tochigi Prefecture) for a pilgrimage route after the Tōshōgū shrine was built there and dedicated to Ieyasu following his death in 1616. The Ōshū Kaidō followed the same route as the Nikkō Kaidō from Edo until Utsunomiya, where it branched off to continue as far as Shirakawa, in what is now Fukushima Prefecture.

The Five Highways ranged from around five to nine meters in width, with the considerable breadth fitted to their military purpose.

In 1659, inspectors were appointed to manage the highways, at the same time keeping the daimyō under observation. They reported directly to shogunate officials, who kept a close eye on the roads.

When daimyō were required to make regular visits to Edo under the sankin kōtai system, their processions were like military parades, so they needed the breadth of the Five Highways. This suited the shogunate, which wanted to monitor and manage regional leaders. Movement was basically forbidden from around eight in the evening until four in the morning. Even if the party was late, it could not travel at night. The forced expense of frequent lodging stops was one of the ways in which the daimyō were gradually stripped of power.

Other Roads Around the Country

The Five Highways stretched as far as Kyoto in the west and Shirakawa in the north, but this was not enough to reach all of the domains. Secondary roads further connected the country.

There is not always clear agreement on the number of post stations for these roads. Distances are approximations.

For example, until 1700, samurai from the Kishū domain (now Wakayama Prefecture) used the Ise Kaidō to travel through Ise (now Mie Prefecture) before joining the Tōkaidō on their way to Edo.

The Ise sangū meisho zue (Illustrated Guide to the Ise Pilgrimage) depicts a daimyō’s entourage passing the Seki-juku station (now in Mie Prefecture) on the Tōkaidō. The station was a connection from the major highway to the Ise Kaidō. While it is not clear whether the group was from Kishū, the picture vividly shows a domain’s retainers traveling to the Ise Kaidō. The Tōkaidō saikenzu (Detailed Map of the Tōkaidō) included the castle towns and post stations towns from Edo to Kyoto, and it also showed Seki-juku next to the castle town of Kameyama, as well as a road leading south to Ise. 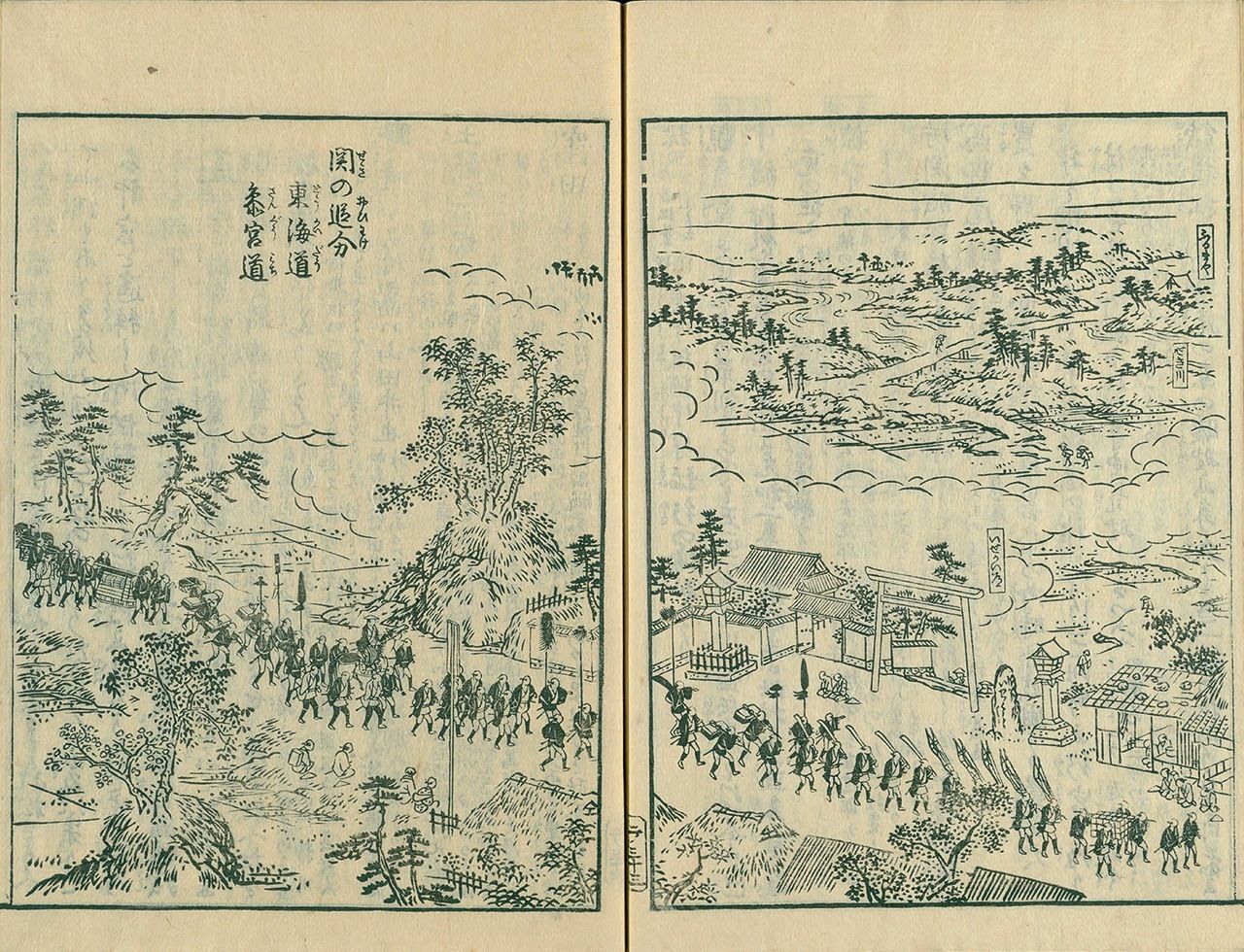 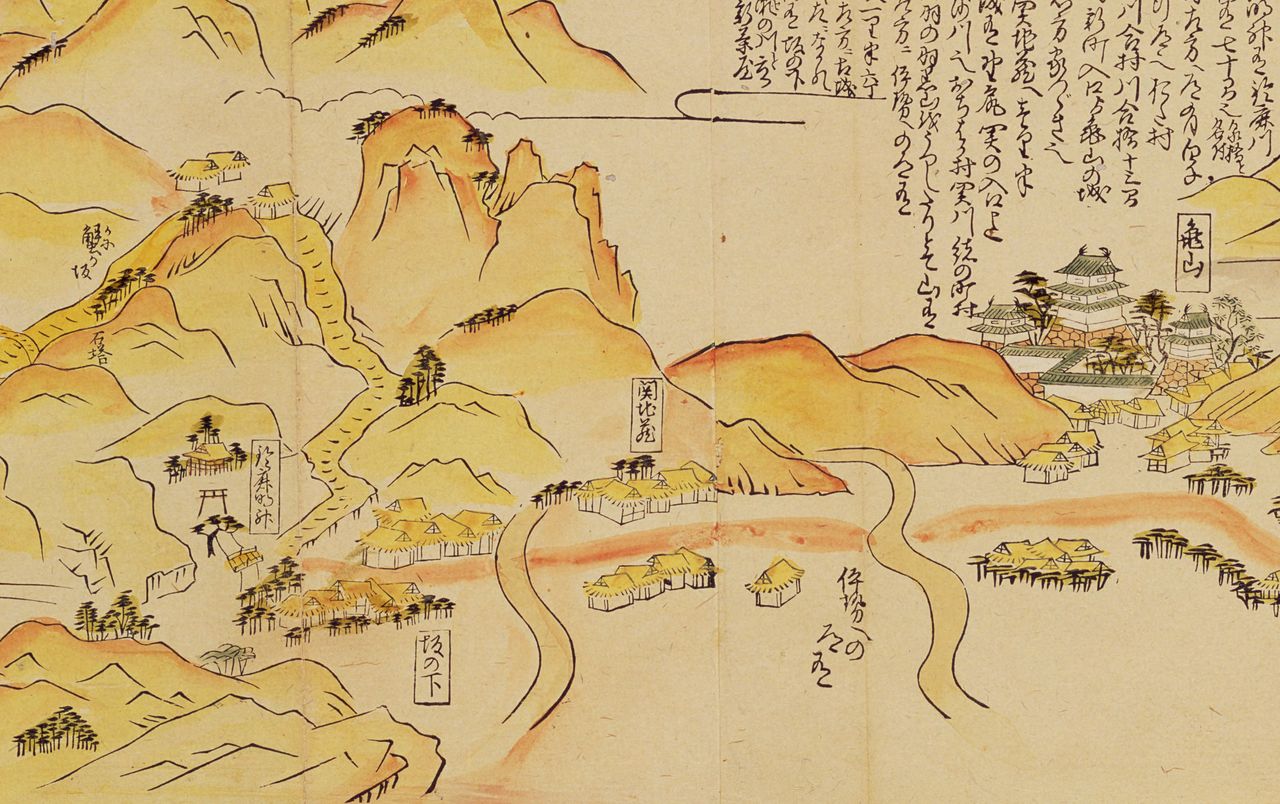 The Tōkaidō saikenzu (Detailed Map of the Tōkaidō) gave details on roads and post stations as well as the local topography. This page shows the area around the Seki-juku post station. Kameyama Castle is to the right, Seki-juku in the center, and the road to Ise in the lower right. (Courtesy National Archives of Japan)

Roads like the Hokurikudō and San’yōdō had enough traffic to rival the Five Highways, and performed a vital role if Kyoto was considered as Japan’s center. The Hokurikudō linked the city to Kanazawa and Echigo (now Niigata Prefecture), while the San’yōdō connected it to the west. They were defined as secondary roads, however, as the shogunate placed greater importance on routes to Edo.

The mass movements under the sankin kōtai system required corresponding transport of goods, which gave a boost to commerce, so that not only samurai but also commoners made more frequent journeys. Thus, although the highway system was constructed for military purposes, its roads came to support trade, industry, and tourism.

(Originally published in Japanese. Banner image: Edo yori Fushimi made Kisoji Nakasendō Tōkaidō ezu [The Kisoji Nakasendō and Tōkaidō from Edo to Fushimi]. The picture shows the Nakasendō, Kōshū Kaidō [not mentioned in the title], and Tōkaidō lined up from top to bottom. Created by an unknown artist in 1668. Courtesy National Diet Library.)