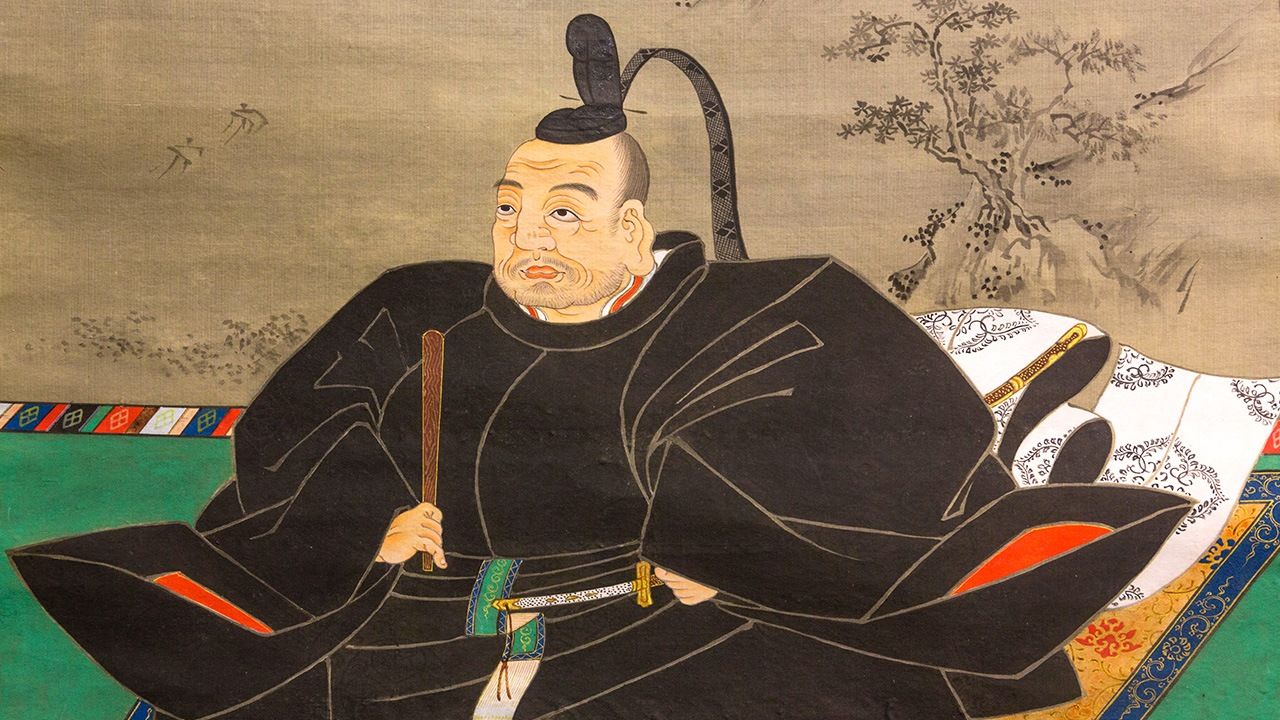 Tokugawa Ieyasu and the Founding of the Edo Shogunate

History Jul 7, 2020
Tokugawa Ieyasu founded a dynasty that ruled Japan for more than 200 years, but he had to wait to take his chance to become shōgun and reshape the country in his image.

From Hostage to Leader of Japan

Tokugawa Ieyasu was born in Mikawa Province (now Aichi Prefecture) in 1543. While still a young boy, the future founder of the Tokugawa shogunate was sent as a hostage first to the Oda family in neighboring Owari Province, and then to the daimyō Imagawa Yoshimoto of Suruga and Tōtōmi Provinces. During this time, his father was killed by one of his vassals, and the family’s land effectively became Imagawa territory. 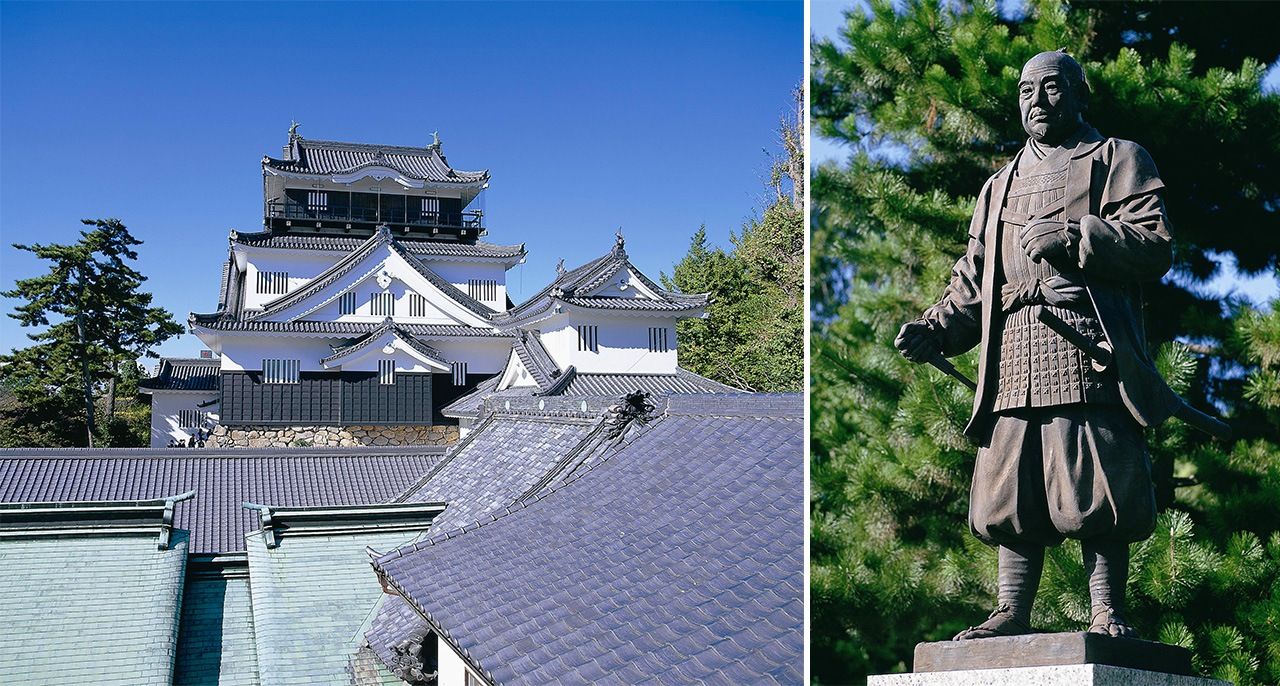 However, Oda Nobunaga won a devastating victory over Yoshimoto at the Battle of Okehazama in 1560. By allying with Nobunaga, Ieyasu was able to escape Imagawa influence and subjugate Mikawa Province, becoming a daimyo himself. He then gradually increased his territory, first destroying the Imagawa through a pact with Takeda Shingen, and later conquering Takeda land. When Toyotomi Hideyoshi acted quickly to become Nobunaga’s successor after the warlord’s sudden death in 1582, he and Ieyasu initially clashed, but in the end Ieyasu agreed to become his vassal. After the 1590 destruction of the Hōjō clan in Odawara, Ieyasu was ordered to move to the Kantō region and he based himself in Edo (now Tokyo).

Hideyoshi died in 1598, and Ieyasu was the most powerful of the Five Great Elders, who were meant to govern until Hideyoshi’s young son came of age. Ieyasu, however, soon began forging alliances and acting as if he ruled the country. Ishida Mitsunari, one of Hideyoshi’s top administrators, joined with Mōri Terumoto, another of the Five Great Elders, to raise an army to topple Ieyasu.

When forces led by Ieyasu and Mitsunari clashed at the Battle of Sekigahara in 1600, Ieyasu sealed victory in just a few hours. The defeated Mitsunari was executed in Kyoto. After the battle was over, Ieyasu confiscated land from 93 daimyō on the losing side, with a total farming income of more than 5 million koku (a unit equivalent to around 180 liters of rice), and redistributed it. While many new vassals who submitted after the battle enjoyed increases in territory, most were relocated to distant parts. Strategic areas including major cities like Edo and Osaka, their environs, and transportation routes were either directly under Tokugawa control or that of the clan’s longstanding allies. This meant that if daimyō whose loyalty was more uncertain started to revolt, they could not quickly reach Edo or Osaka. 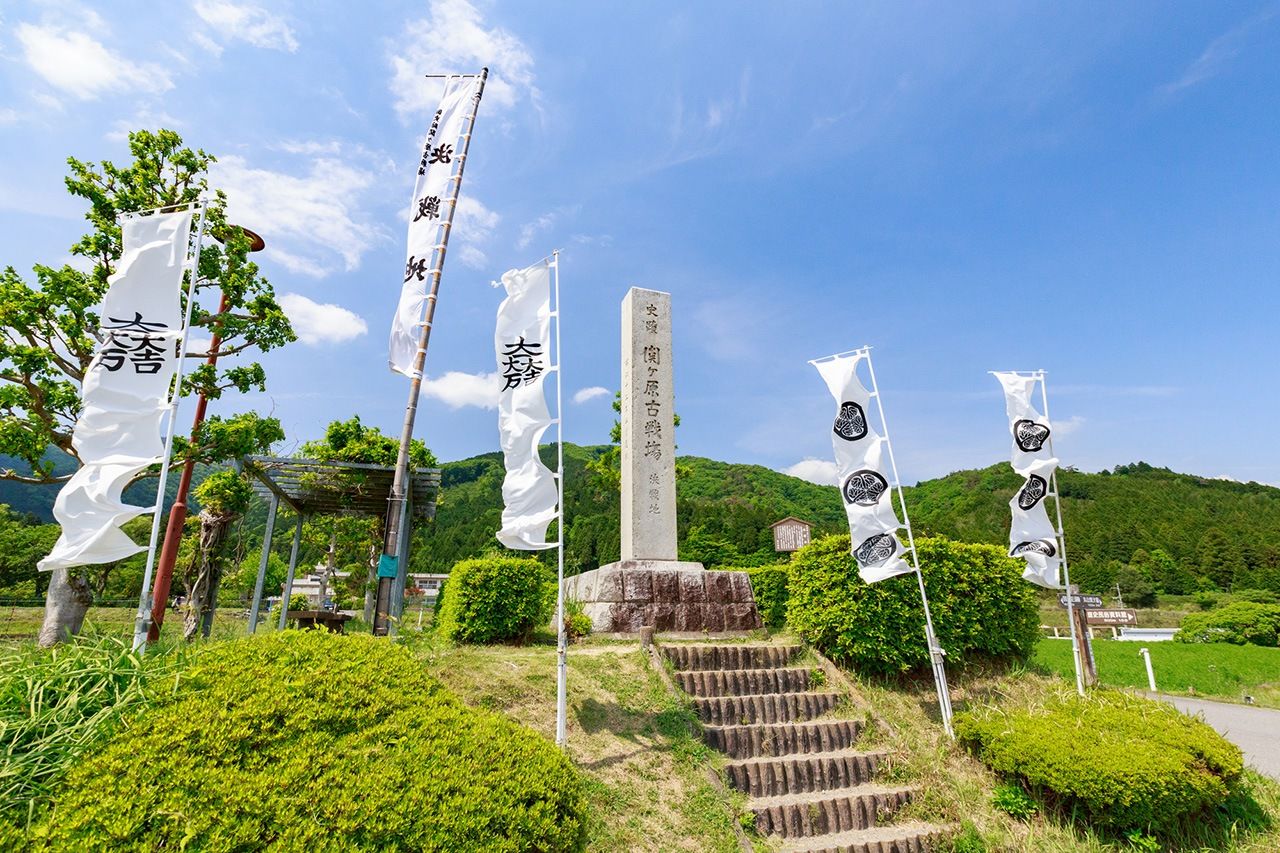 A monument marking the location of the Battle of Sekigahara in Gifu Prefecture. (© Pixta)

Having won mastery of the country, in 1603 Ieyasu received the title of shōgun and formally established samurai rule in Edo. Including his various allies and vassals, he could command hundreds of thousands of soldiers, giving him total military control over the country.

Politically Ieyasu was advised by men like the daimyō Honda Masanobu, the Zen priest Konchiin Sūden, and the Neo-Confucian philosopher Hayashi Razan. A full-fledged political system was not established until the time of Ieyasu’s grandson Iemitsu.

In 1603, Ieyasu ordered major civil engineering work in and around Edo Castle. This included the construction of canals and reclamation of a great deal of land around the Hibiya inlet. Road transportation was improved, and the bridge Nihonbashi was designated as the starting point for five major highways connecting Edo to Kyoto and other parts of the country. These efforts helped Edo to flourish and grow from a small settlement to a city with a population in the tens of thousands by Ieyasu’s later years.

After just two years as shōgun, Ieyasu stepped down in 1605 and was succeeded by his son Hidetada. This was a public demonstration that the position of shōgun would be passed down among the Tokugawa family. However, Ieyasu continued to wield power from bases at Fushimi Castle and Sunpu Castle.

After the Battle of Sekigahara, Toyotomi Hideyoshi’s son Hideyori was reduced to the rank of daimyo, with territory yielding 600,000 koku. Yet he remained a potential threat who might win support from other daimyō for his claims. When Ieyasu met him in 1611 for the first time in several years, he found Hideyori had grown into an astute youth. To ensure the Tokugawa dynasty would last, Ieyasu looked for a way of removing his rival at Osaka Castle.

The Toyotomi family rebuilt Kyoto’s Hōkōji temple, which was closely associated with Hideyoshi. However, Ieyasu took objection to the newly cast bell that would be used in dedication ceremonies. A carving on it included the two characters for Ieyasu (家康), but they were separated by another character, which he interpreted as representing a curse against the Tokugawa clan. This was a pretext for the first Siege of Osaka Castle in 1614, in which shogunate forces of 200,000 soldiers encircled the stronghold. A settlement offered brief respite before the second siege the following year resulted in clear victory for Ieyasu and the suicide of Hideyori.

The same year, Ieyasu issued an edict that each domain could only have one castle. This greatly reduced the military power of the daimyō in the west of Japan. Through his son Hidetada, the shōgun, he also introduced the buke shohatto (Laws for the Military Houses), a series of edicts formulating strict codes of conduct for daimyō. These regulated such matters as marriage and construction of castles.

Thus, Ieyasu asserted both military and legal control over daimyō movements. But this was not enough, as he aimed to contain any authorities that might jeopardize the stability of his regime. This included the imperial court.

Officially, the Edo shogunate derived its power through the emperor’s appointment of Ieyasu as shōgun. As such, he showed a surface level of respect to the imperial court. The court had faced a loss of territory during the Warring States period (1467–1568), and in 1601 Ieyasu presented it with holdings of 10,000 koku. Yet it was the shogunate that actually managed the imperial family’s land. Ieyasu also established the position of shoshidai (shogunal deputy) in Kyoto to keep an eye on the western daimyō and imperial court, observing the daily business of the court and nobles. Two new liaison officers conveyed the deputy’s directions to the court. They were selected from among the nobles, receiving a salary from the shogunate.

Laws in 1613 encouraged nobles to concentrate on study and prescribed palace duties. Further regulations in 1615 dealt with the running of the court with rules going so far as to legally define aspects of the lives of the emperor and nobles, as well as precedence and promotion among the latter. In this way, Ieyasu ensured the court and emperor had no political power.

Buddhist warrior monks had also been a major force during the Warring States period. As with the daimyō and imperial court, Ieyasu introduced legislation in 1615 to regulate the activities of temples and control them.

The shogunate’s main financial support was tax income from its territory of 4 million koku. Farmers who owned fields and residences with names in the land register were responsible for paying taxes and performing other duties. Ieyasu apparently kept the farmers in line by restricting their income so that while they did not starve, they were unable to increase their wealth. The shogunate also held direct control over cities like Edo, Osaka, Kyoto, Nagasaki, and Sakai. Its monopoly on Nagasaki trade brought particularly rich profits, although this was after Ieyasu’s death.

Like the government of Toyotomi Hideyoshi, the shogunate earned profits from mines that it managed directly. Ieyasu brought in his own coinage, producing a large amount of currency at newly established gold and silver mints across the country. Japan had used Chinese bronze coins for its currency up to this point, so this was a landmark in the country’s financial policy.

Ieyasu pursued an active foreign policy. When the Dutch ship De Liefde ran aground in Kyūshū in 1600, he met with the Dutch second mate Jan Joosten van Lodensteijn and the English navigator William Adams. He invited them to Edo, where they advised him on foreign affairs, and he encouraged trade with the Netherlands and England. Unlike the Catholic countries of Portugal and Spain, the two Protestant countries separated trade from missionary activities. A Dutch trading house opened for business in Hirado in 1609, and an English one in 1613. 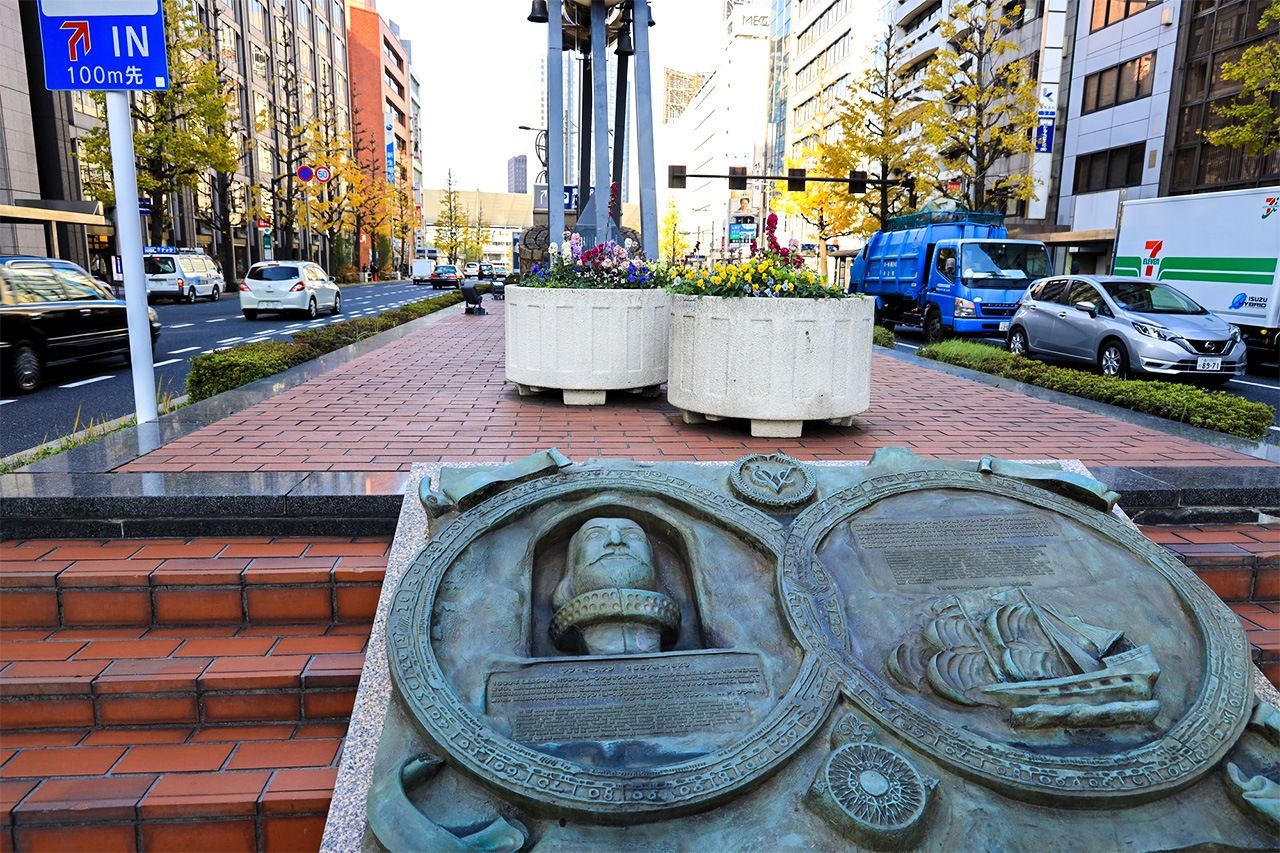 Portuguese traders carried Chinese raw silk from Macao to Nagasaki, where they sold it for huge profits. In 1604, Ieyasu countered this by having designated silk merchants from Kyoto, Sakai, and Nagasaki form an association to set import prices every spring. They made a bulk purchase of raw silk from the Portuguese at the price they had decided and then divided it among themselves.

In 1610, Ieyasu sent the Kyoto merchant Tanaka Shōsuke to Spanish territory in what is now Mexico, where he requested the restart of trade with the Spanish Empire in Luzon (now the Philippines). Trade was previously broken off after Hideyoshi’s 1597 execution of 26 missionaries and believers in Nagasaki.

Ieyasu also restarted diplomatic relations with Korea following Hideyoshi’s failed invasion attempts. With the assistance of the Sō clan on the island of Tsushima, official ties were reestablished in 1607, and Korea eventually came to send diplomatic missions to Japan to mark shogunal succession. While official relations were not repaired with Ming China, Korea’s ally against Hideyoshi, Chinese merchants traded extensively in Hirado and Nagasaki.

Toward the end of his life, however, Ieyasu became less enthusiastic about foreign connections. Having tacitly allowed Christianity for many years, he first banned it in territory directly controlled by the shogunate in 1612 before expanding the prohibition nationwide the following year. At the same time, he ordered the destruction of churches and expulsion of missionaries, and pressured believers to thoroughly renounce their faith. He is thought to have feared Spanish or Portuguese invaders joining forces with Japanese Christian groups. In 1614, he made a show of exiling more than 300 Christians to Manila and Macao. It is likely that his policy shift came about as he saw the ties he had forged with the Netherlands and England as a substitute for those with Portugal and Spain. After his death, Hidetada tightened restrictions further, and by Iemitsu’s reign Japan entered what later became known as the sakoku or “closed country” system.

Ieyasu also displayed his cultural understanding. Hon’ami Kōetsu was a Kyoto craftsman known for his lacquer work Funabashi makie suzuribako (Writing Box with Pontoon Bridge), who was also skilled in calligraphy and ceramics. In 1615, Ieyasu gave him land at Takagamine, north of Kyoto, where Kōetsu established a village of artisans. Kōetsu was close to the painters Tawaraya Sōtatsu and Ogata Kōrin and the potter Ogata Kenzan, and the cultural flowering of the Kan’ei era (1624–44) had its beginnings in Takagamine.

In 1616, Ieyasu fell sick after going out hunting with his hawks. Some attributed it to eating sea bream tempura, but it seems likely now that he had stomach cancer. Ieyasu made medicine as a hobby, so he ignored his doctor’s orders and treated himself. His condition steadily deteriorated, however, and he died on June 1 at the age of 73. He was initially buried at the Kunōzan shrine in what is now Shizuoka Prefecture, but the following year he was posthumously deified and enshrined at the Nikkō Tōshōgū Shrine in today’s Tochigi Prefecture. 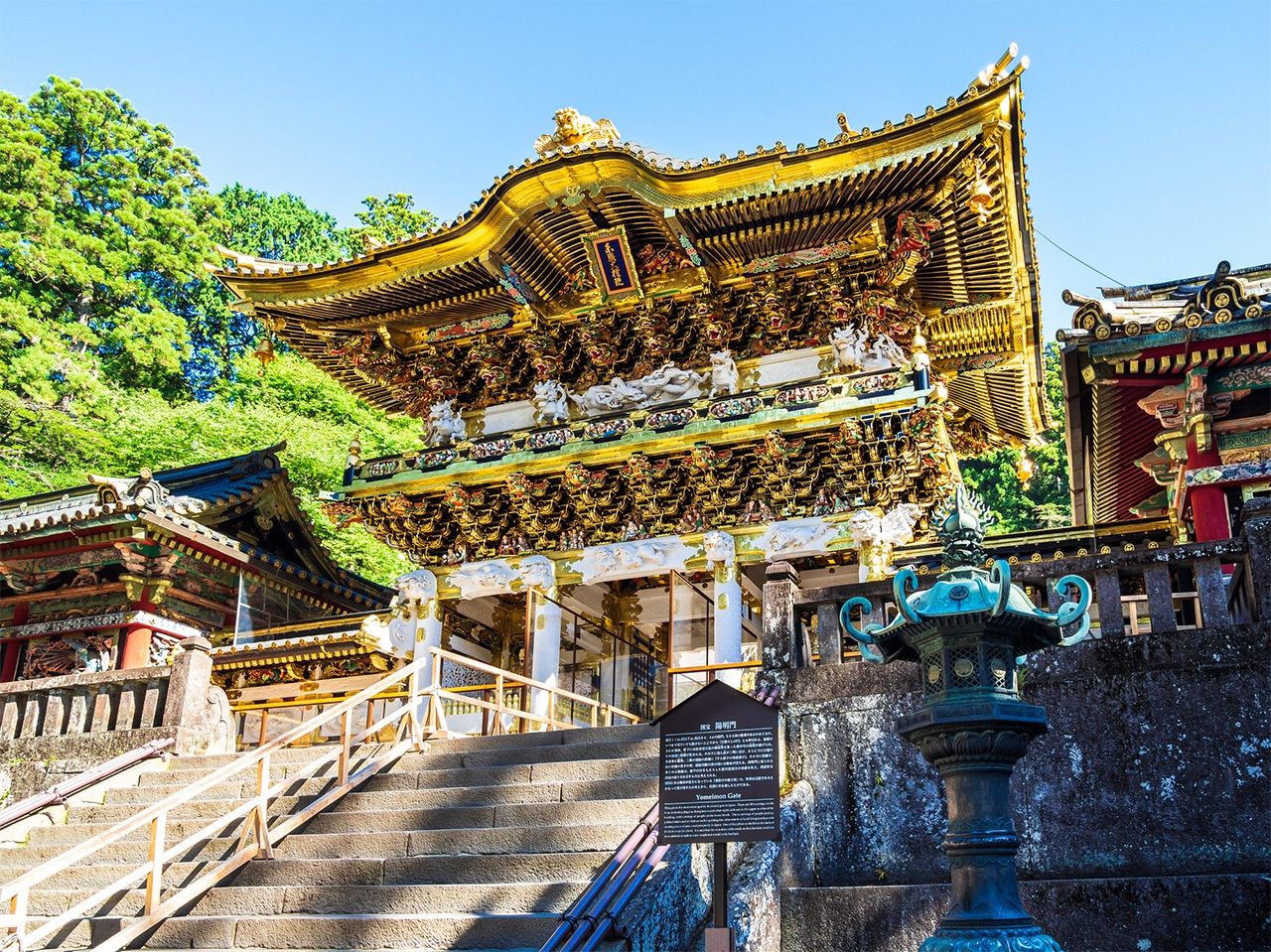 Ieyasu was born in the Warring States period and spent much of his youth as a hostage. After winning independence as a daimyō, he patiently built up his territory, and then grew in power as a leading figure of Hideyoshi’s time. At 60, he finally achieved total power and established the Tokugawa shogunate. In just over a decade, he laid the foundations for more than two centuries of peace during the Edo period (1603–1868).