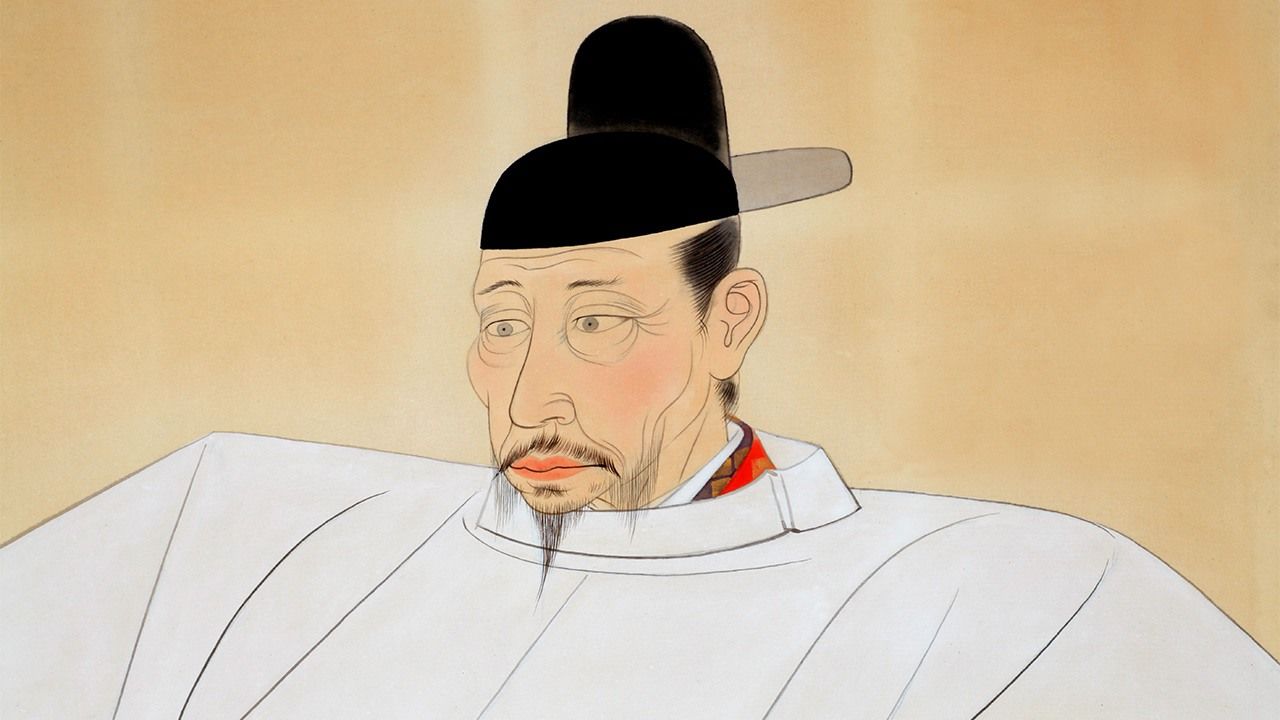 In June 1582, Oda Nobunaga appeared to be on the brink of unifying Japan when he was betrayed by his deputy Akechi Mitsuhide and forced to commit suicide at the temple of Honnōji near Kyoto. Another of his followers, who would go down in history as Toyotomi Hideyoshi, in turn defeated Mitsuhide in battle, and ultimately completed Nobunaga’s task.

Hashiba Hideyoshi, as he was first known, is said to have been the son of an ashigaru, or foot soldier. He was born in Nobunaga’s province of Owari (now Aichi Prefecture) in 1537. Distinguishing himself by serving the warlord, he rose to become one of his deputies. At the time of Nobunaga’s death, Hideyoshi had won a victory against the forces of Mōri Motonari in western Japan, in which he had diverted a river to flood Takamatsu Castle. Hastily signing an armistice before Mōri’s side learned of Nobunaga’s death, he rushed east to overcome Mitsuhide at the Battle of Yamazaki outside Kyoto, just 11 days after the Honnōji betrayal. In 1583, he defeated Shibata Katsuie, another Oda deputy, and built Osaka Castle as part of a bid to be seen as Nobunaga’s successor. 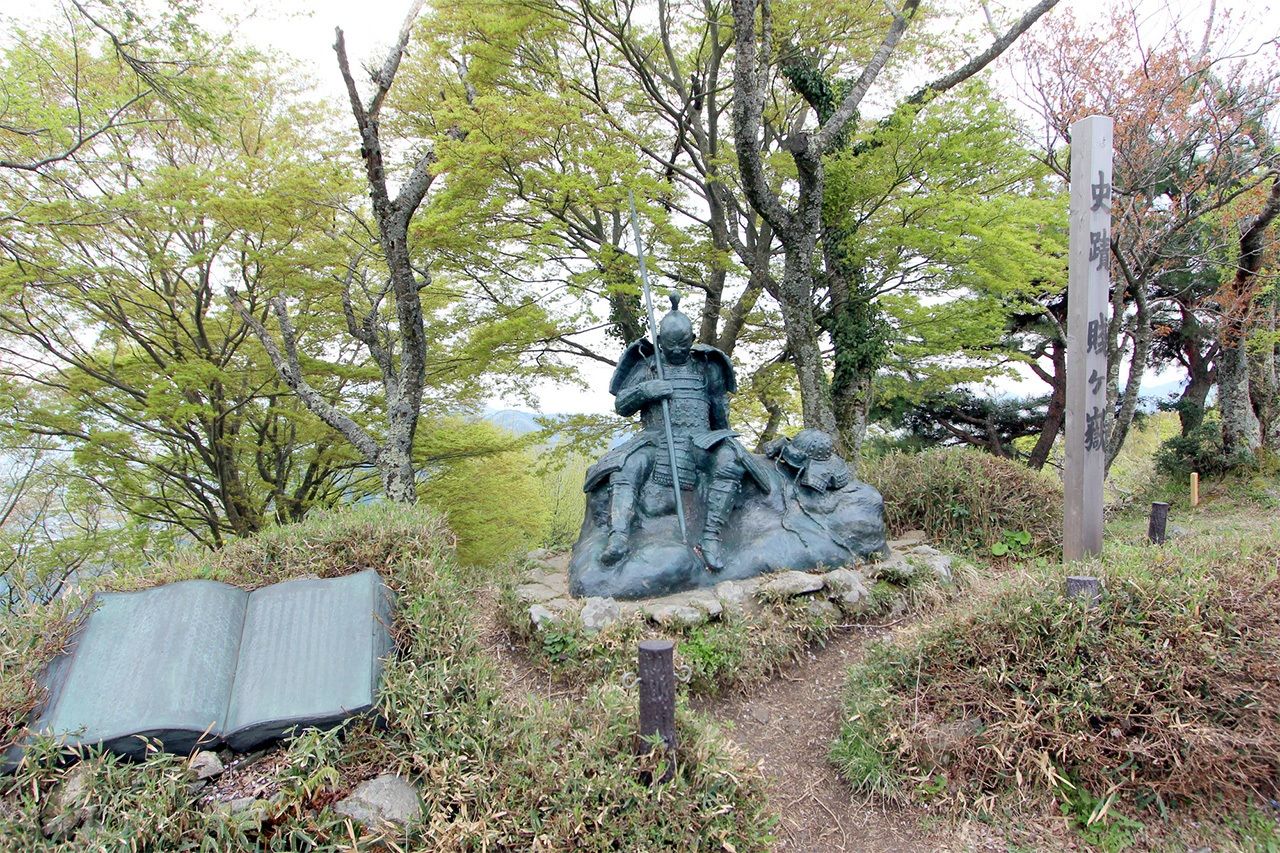 A statue of a warrior in Nagahama, Shiga Prefecture, commemorating the Battle of Shizugatake, where Hideyoshi defeated Shibata Katsuie. (© Photo Library)

In 1585, Hideyoshi overpowered Chōsokabe Motochika to win control over Shikoku, and was appointed kanpaku (regent) in the same year. In the following year Emperor Go-Yōzei granted him the clan name Toyotomi. Having established himself with the backing of the imperial court, he issued an edict banning battle between daimyō. When the Shimazu clan of Satsuma refused to follow this in 1587, he defeated it and brought Kyūshū under his rule. In 1590, he overthrew the Hōjō clan in Odawara, Kantō, and further gained control over Tōhoku. Just eight years after Nobunaga’s fall, Toyotomi Hideyoshi had succeeded in unifying the realm.

Income of 2 million koku (a unit equivalent to around 180 liters of rice) from directly administered territory provided the economic basis for the Hideyoshi administration. The acquisition of important mines, such as at the silver production center Iwami Ginzan, also contributed, and rich merchants in newly controlled cities like Kyoto and Osaka supplied additional money and necessary support.

Politically, Hideyoshi’s government was a dictatorship, although he took advice from his younger brother Hidenaga and the tea master Sen no Rikyū. When he appointed his nephew Hidetsugu as kanpaku, Hideyoshi took on the new title of taikō, or retired regent, still wielding effective power. It was only toward the end of his life that he formed a council of Five Great Elders, consisting of powerful daimyō, to make decisions on matters of state.

From 1582, Hideyoshi had surveys conducted for taxation purposes in land he had captured and controlled directly, or that held by daimyō who were his vassals. Previously these cadastral surveys, or kenchi, were based on farmers and vassals themselves reporting on their lands and harvests to daimyō. Hideyoshi would not accept this, and in many places dispatched his own commissioners to make detailed reports on the area, including the grade of fields and the land surrounding residences. Calculations based on four grades of fields gave the overall expected yield in koku.

Prior to this, it had been typical for several people to share rights to a plot, but Hideyoshi recorded the names of those farmers who directly cultivated the plot into a land register. While guaranteeing their rights to cultivate the land, it also required them to pay tax in the form of grain and to provide military porters in times of war. Land registers were created for each village, and grain tax was also imposed on villages as units. In this heavy system of taxation, two-thirds of the harvest went to the authorities, with only a third retained by the owner.

Having brought the whole country under his control, in 1591 Hideyoshi required daimyō to submit land registers and maps for their domains. These were used as a basis for officially setting their tax rate in koku, as well as a proportional level of military service. The Edo shogunate later carried on this system.

Hideyoshi’s famous katanagari, or “sword hunt,” took place in 1588, when farmers were required to give up weapons like swords, bows, spears, and basic firearms. It was quite usual for them to have their own weapons at the time, which they used to defend their settlements or when called up as soldiers by their daimyō. Hideyoshi sought to prevent armed insurrections by defining them solely as farmers.

An edict in 1591 forbade low-ranking samurai from becoming townsmen or farmers, and farmers from engaging in mercantile activity or craftwork. The following year, another edict ordered a national census of the number of people and households in different classes. The cumulative effect of the land surveys, sword hunt, and these edicts was to firmly establish a class system of different occupations and make it impossible to move between them. While samurai, merchants, and craftsmen came to live in castle towns and other large settlements, the villages consisted only of farmers. (The system whereby samurai were separated from farmers is known as heinō bunri.)

At first Hideyoshi took the same foreign policy approach as Nobunaga, continuing to provide protection to Christianity. After he took control of Kyūshū in 1587, however, he learned that the Christian daimyō Ōmura Sumitada had ceded Nagasaki to the Society of Jesus, Japanese people had been sold as slaves overseas, and Christians had destroyed shrines and temples. Hideyoshi ordered that missionaries should leave the country. Yet his encouragement of continued trade with the Europeans meant the law was not thoroughly enforced, and before long missionary activities started up again. Then in 1596, he heard testimony from Spanish sailors on the San Felipe—shipwrecked on the coast of Tosa (now Kōchi Prefecture)—that Spain used its missionaries to win new territory. He ordered the capture of 26 Christian missionaries and believers, who were executed in Nagasaki the next year. 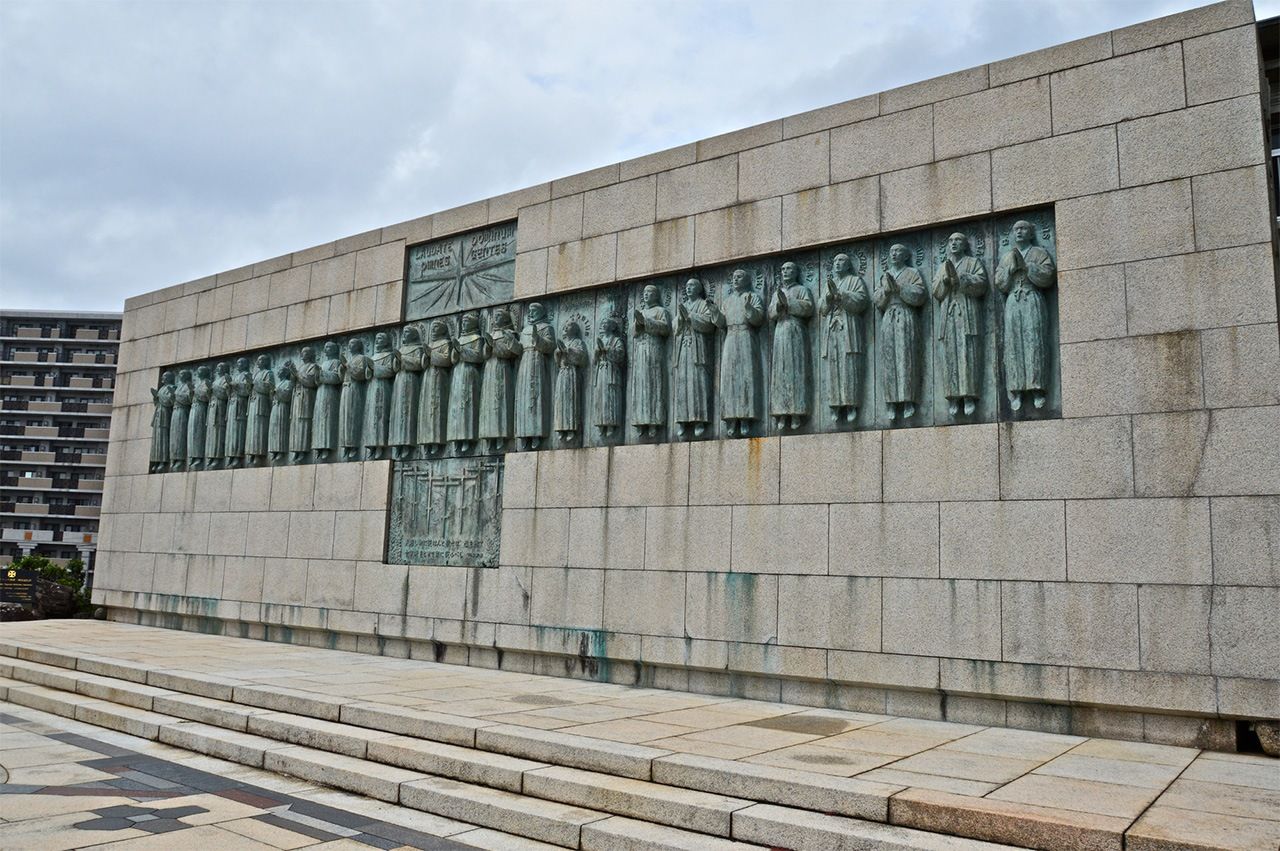 The Twenty-Six Martyrs Monument in Nagasaki, commemorating those executed in 1597. (© Pixta)

Many Japanese daimyō and merchants had established ties with Southeast Asia. Hideyoshi’s 1588 antipiracy edict showed he aimed to secure safe routes for maritime trade. But he also had grander designs of conquering a declining Ming China and setting Japan at the center of the international order in Asia. He demanded the Portuguese possession of Goa in India, the Spanish dependency in the Philippines, and the island the Japanese knew as Kōzankoku (now Taiwan). He also demanded tribute from Korea, using the Sō clan on the island of Tsushima as go-betweens in conveying a message to the Koreans that they should act as guides to his troops as they passed through for an assault on Ming China.

When Korea rejected these demands, in 1592 Hideyoshi launched an invasion of the peninsula, starting by sending a huge army of 150,000 to Busan. While the Japanese troops made rapid progress, the Korean navy, led by Admiral Yi Sun-sin, cut off their supply lines with “turtle ships,” known for their shell-like protective covering. Volunteer soldiers also put up fierce resistance. Ming troops arrived as reinforcements, turning the tide further against the Japanese and bringing the war into a deadlock. A truce and a long series of negotiations followed.

In 1597, however, Hideyoshi began a new campaign, sending 140,000 soldiers to Korea with the aim of occupying the south. But they were again bogged down. The following year, delivering a decisive end to these continental campaigns, Hideyoshi died after an illness. The Japanese troops withdrew, having caused great devastation and loss of life in Korea in military actions as well as dealing an expensive blow to Japan in terms of both men and money, weakening Toyotomi rule at home. As Hideyoshi had fallen out with his nephew Hidetsugu, ordering his suicide in 1595, at his death he left only a five-year-old heir, Hideyori, with the Five Great Elders effectively running the country. 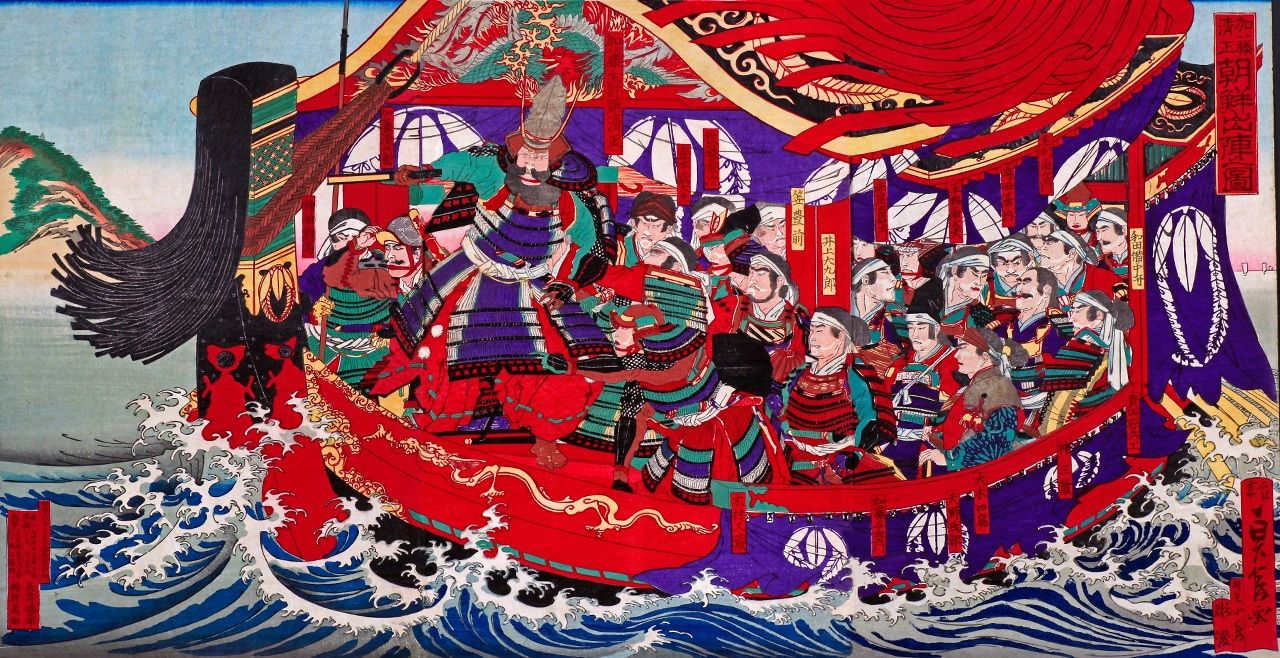 The daimyō Katō Kiyomasa depicted traveling to Korea as part of the military campaigns. (© Aflo)

Hideyoshi’s reign was known for the flourishing of Momoyama culture. The name was applied retrospectively in the Edo period (1603–1868), deriving from the peach (momo) trees on the hill (yama) where Fushimi Castle, his base toward the end of his reign, once stood in Kyoto. Artistically, the culture was characterized by a new emphasis on realism after Nobunaga weakened the power of Buddhist institutions. The greater part played by merchants in society following Hideyoshi’s successful national unification also combined with European influences in a spirit of novelty and grandeur. In modern practice, “Momoyama culture” is commonly extended to include aspects from the early Edo period.

The advances in fort construction during the Warring States period (1467–1568) were applied to magnificent new or remodeled castles built by daimyō, such as those at Himeji, Matsumoto, Inuyama, and Hikone. The tea ceremony became highly fashionable, and daimyō competed to assemble impressive tea sets, studied with tea masters, and held numerous gatherings. More than 1,000 people attended a ceremony hosted by Hideyoshi in 1587 at Kitano Shrine in Kyoto. Sen no Rikyū was the most famous of the tea masters, and the Taian tea house he is said to have designed still stands at the temple of Myōkian in the former capital. 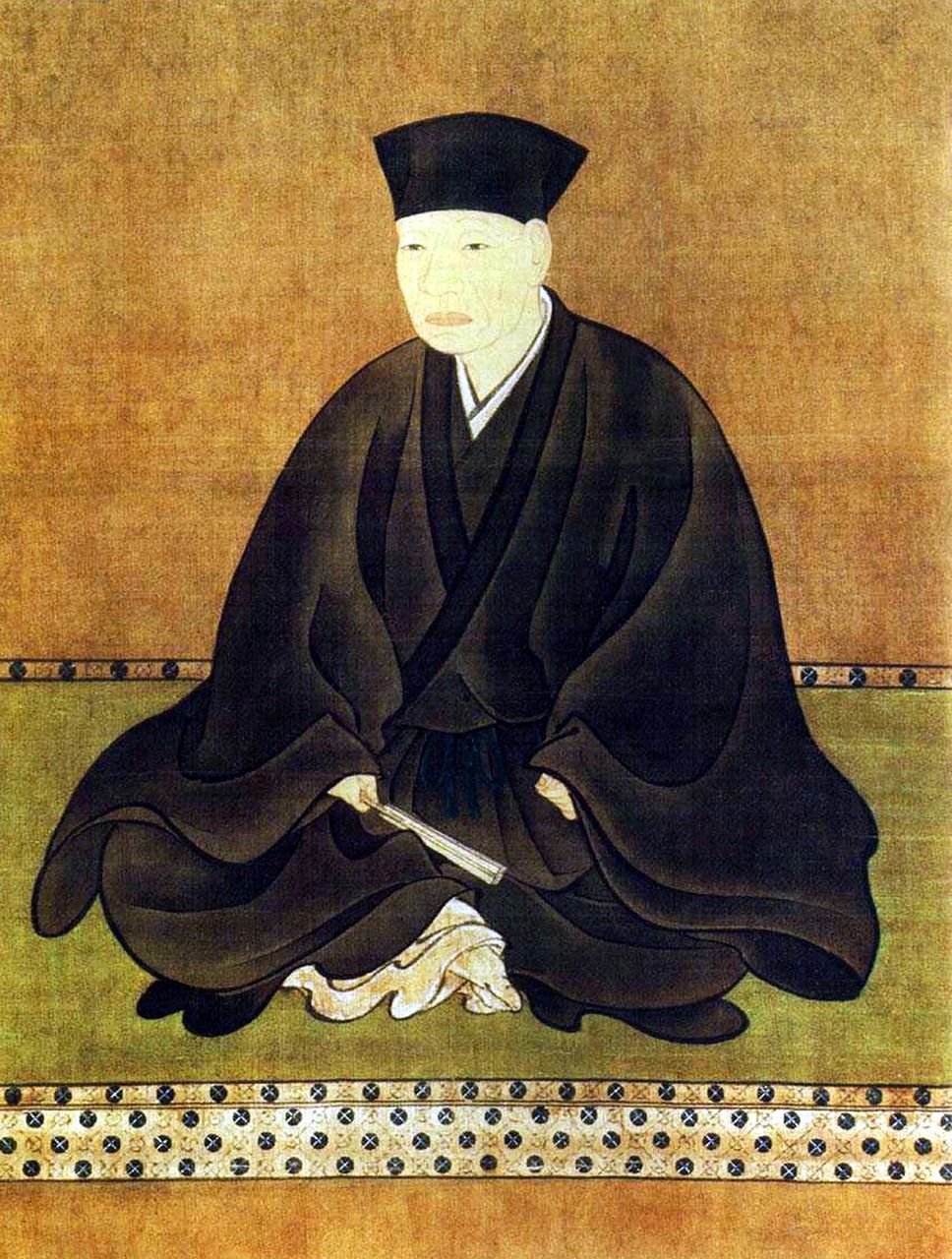 Hideyoshi’s tastes helped to encourage a sense of splendor in painting. Art on sliding doors and walls in castles and temples often incorporated gold lacquer with green or other bright colors. Kanō Eitoku was a leading painter, creating large artworks with bold strokes and integrating ink wash and yamato-e (Japanese painting) styles. His major works include the folding screen paintings Karajishizu byōbu (Chinese Lions) and Rakuchū rakugaizu byōbu (Scenes in and Around the Capital). His disciple Kanō Sanraku, Hasegawa Tōhaku, and Kaihō Yūshō were other notable painters of the day. In crafts, Hideyoshi’s principal wife Yoshiko greatly appreciated the Kōdaiji makie style of lacquer work and collected many fine examples.

The forerunner to kabuki emerged in performances by a troupe led by an Izumo Shrine miko (shrine maiden) called Okuni. This popular entertainment was seen by some as shocking and degenerate, and unlike the all-male kabuki that developed later, most of the performers were women. An early form of bunraku puppet theater also developed, as accompaniment on the samisen—an adapted version of the sanshin from Ryūkyū (now Okinawa)—was incorporated into the puppet drama of the time.

In fashion, the kosode evolved from underwear to become an outer garment—it would later transform into the kimono—while women stopped wearing hakama (divided skirts). Both men and women began to tie up their hair as the custom of carrying items on the head faded away. There was a shift toward eating three meals a day rather than two, but while nobles and samurai were able to make rice a staple, commoners still subsisted mainly on a range of cereals.

In all, this was an era of dramatic change in Japan’s society and culture, driven in large part by the drama of Toyotomi Hideyoshi’s life and leadership that shaped the age.