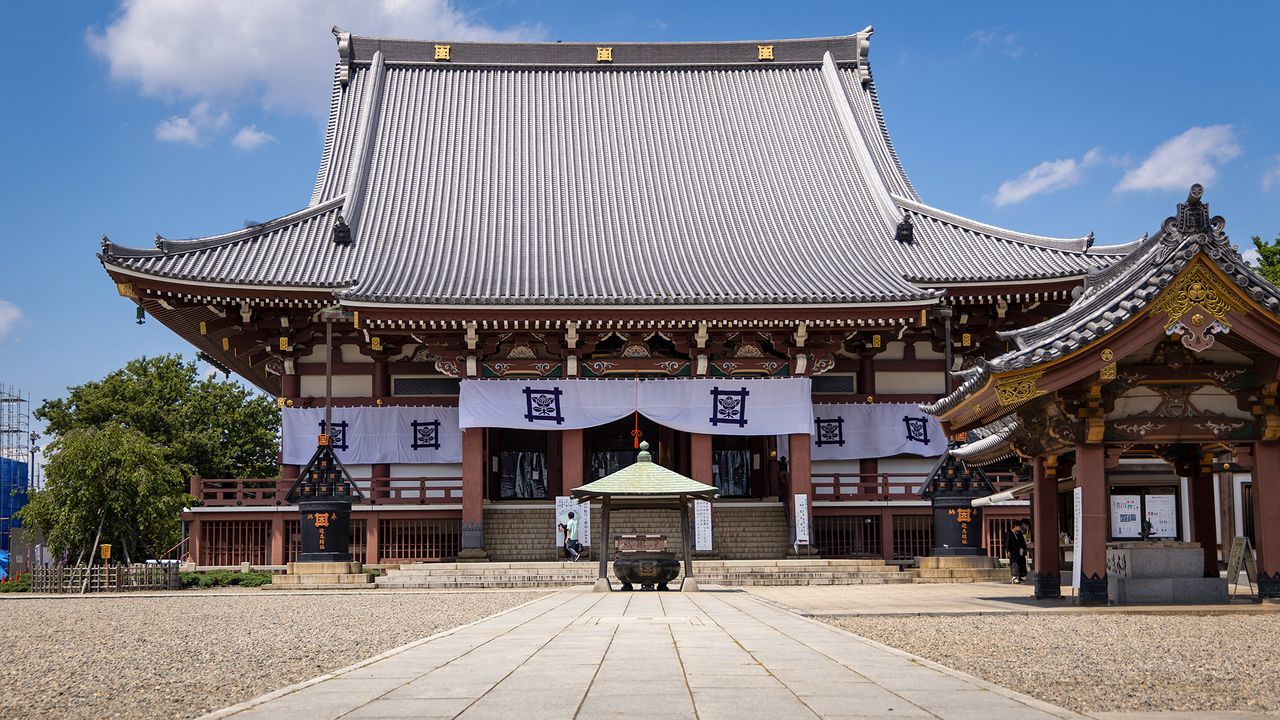 History Travel Jul 1, 2022
The 750-year-old temple Ikegami Honmonji in Tokyo’s Ōta is associated with eminent Buddhist priest Nichiren, founder of the school of Buddhism that bears his name. The historic temple is the site of the oldest five-story pagoda in the Kantō region, and once played a role in developments that led to the birth of modern-day Japan.

Ikegami Honmonji, the head temple of the Nichiren school of Buddhism, in Ōta, Tokyo, is one of the capital’s most famous Buddhist sites. Its vast grounds, measuring nearly 100,000 square meters, include the magnificent Daidō (great hall), the Niōmon gate, and the oldest five-story pagoda in the Kantō region. It was also here that the famous priest Nichiren drew his last breath. Together with neighboring Honmonji Park and numerous sub-temples that were once part of the main compound, the complex covers an extensive area. It attracts worshipers and visitors to the graves of artist Kanō Tan’yū (1602–1674) and legendary professional wrestler Rikidōzan (1924–1963), and is also a favored recreation spot for Tokyo residents.

Andō Masanari, curator at the temple’s Reihōden (treasure hall), explains that the temple is a rare oasis of tranquility amid the hustle and bustle of Tokyo. He hopes that visitors will intone Namu Myōhō Renge Kyō, the Japanese title of the Lotus Sutra, in a mindful moment to foster empathy toward others and pray for world peace. 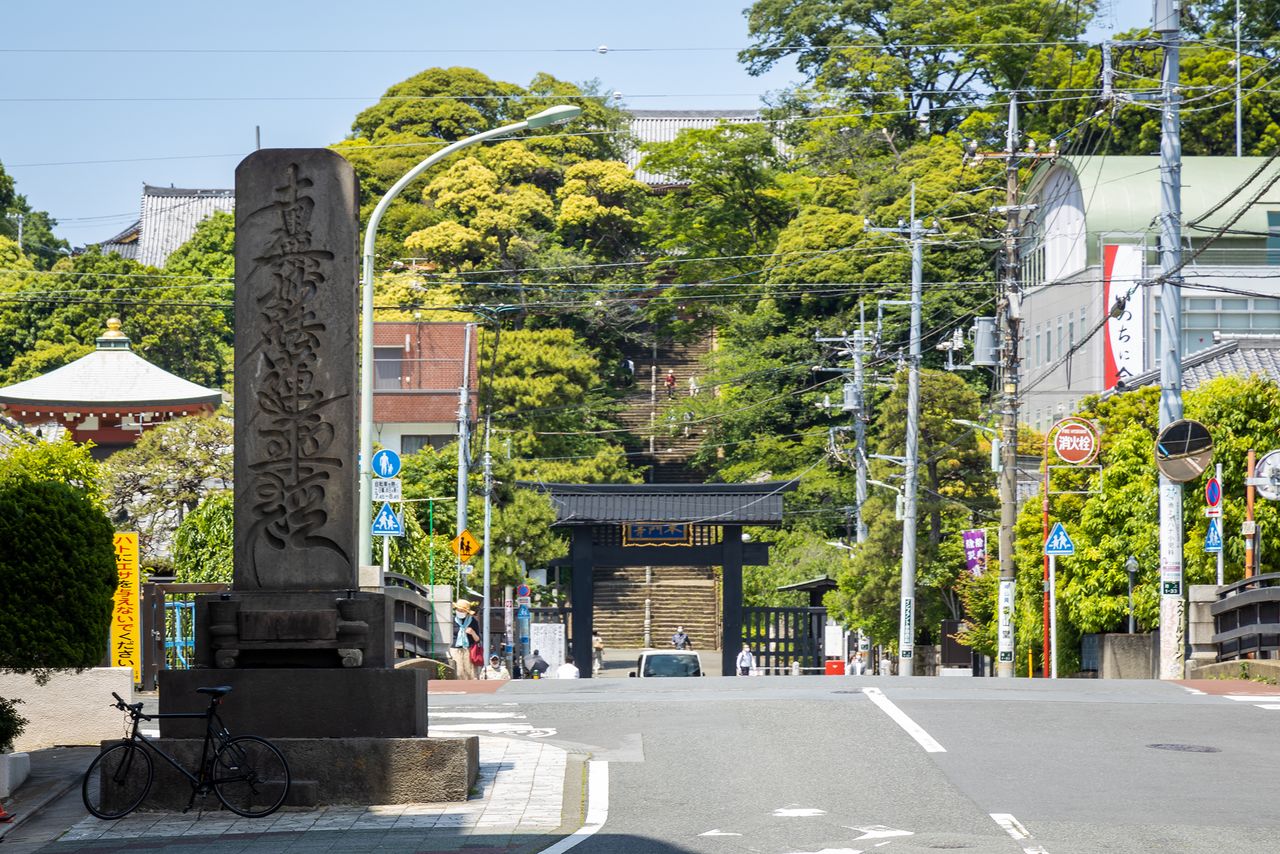 The temple buildings are visible from Ryōzen Bridge, which spans the Nomi River. A stone pillar engraved with the words Namu Myōhō Renge Kyō stands at the site. 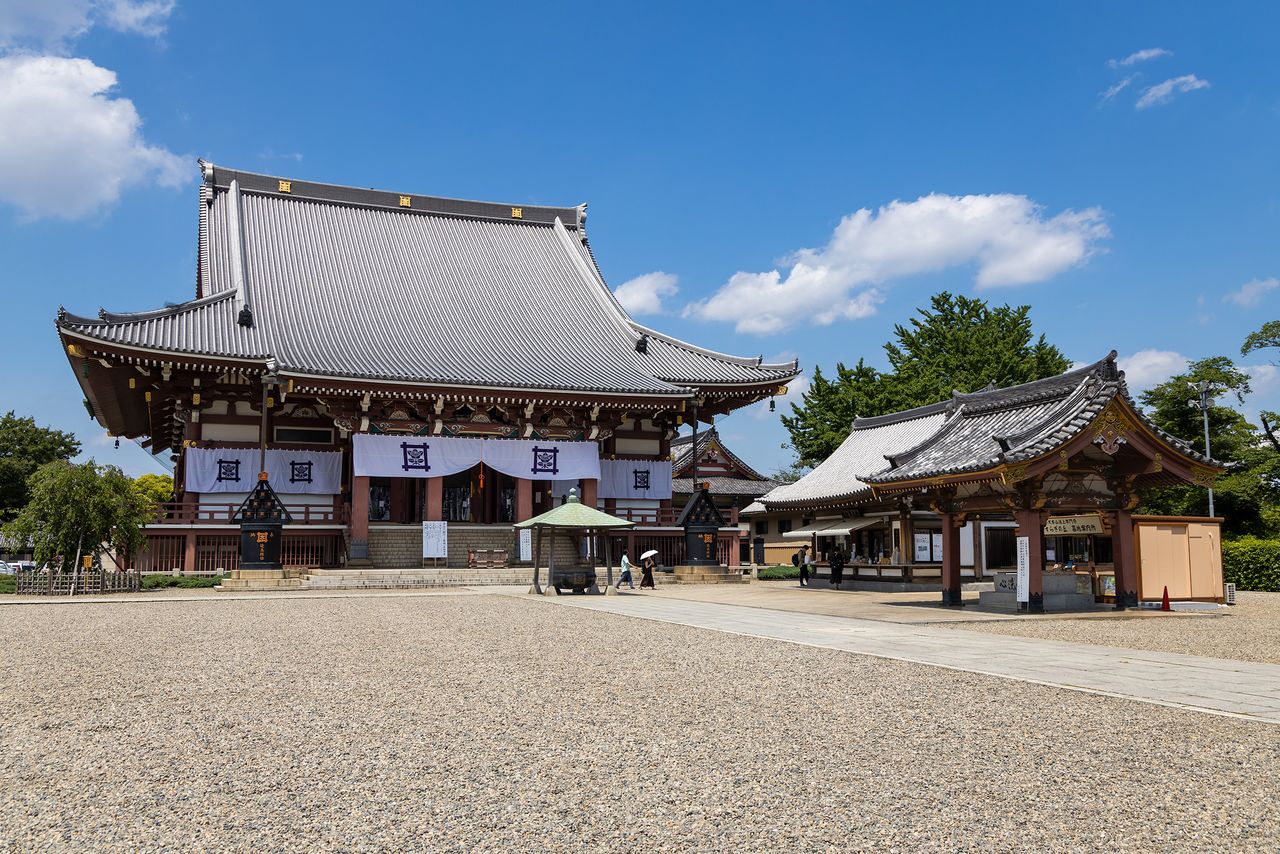 The Daidō, reconstructed in 1964, houses a seated figure of Nichiren that is designated an important cultural asset.

Nichiren, who was active during the Kamakura period (1185–1333), based his teachings on the Lotus Sutra. He advocated that people chant Namu Myōhō Renge Kyō as a way to bring peace to the world. His simple message resonated with common folk, but drew the ire of other schools of Buddhism. Viewed as something of a religious rebel, Nichiren was censured and even exiled by the authorities.

Curator Andō continues: “A person needs to be of strong conviction to found a new school in the Buddhist tradition, especially when it comes into conflict with the powers that be. But Nichiren’s numerous writings show his concern for ordinary people and provid logical explanations for the teachings of the Lotus Sutra.” 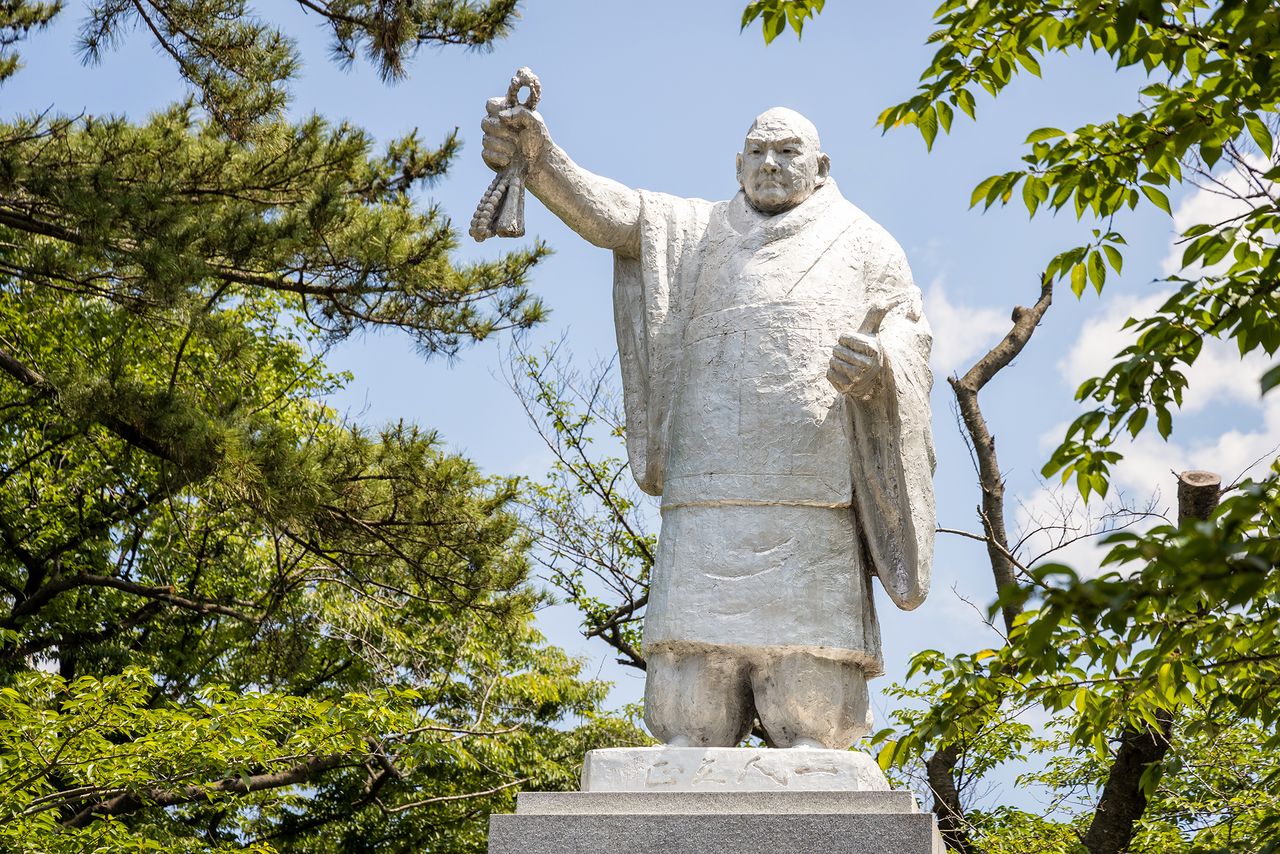 A statue of Nichiren stands in front of the Niōmon. 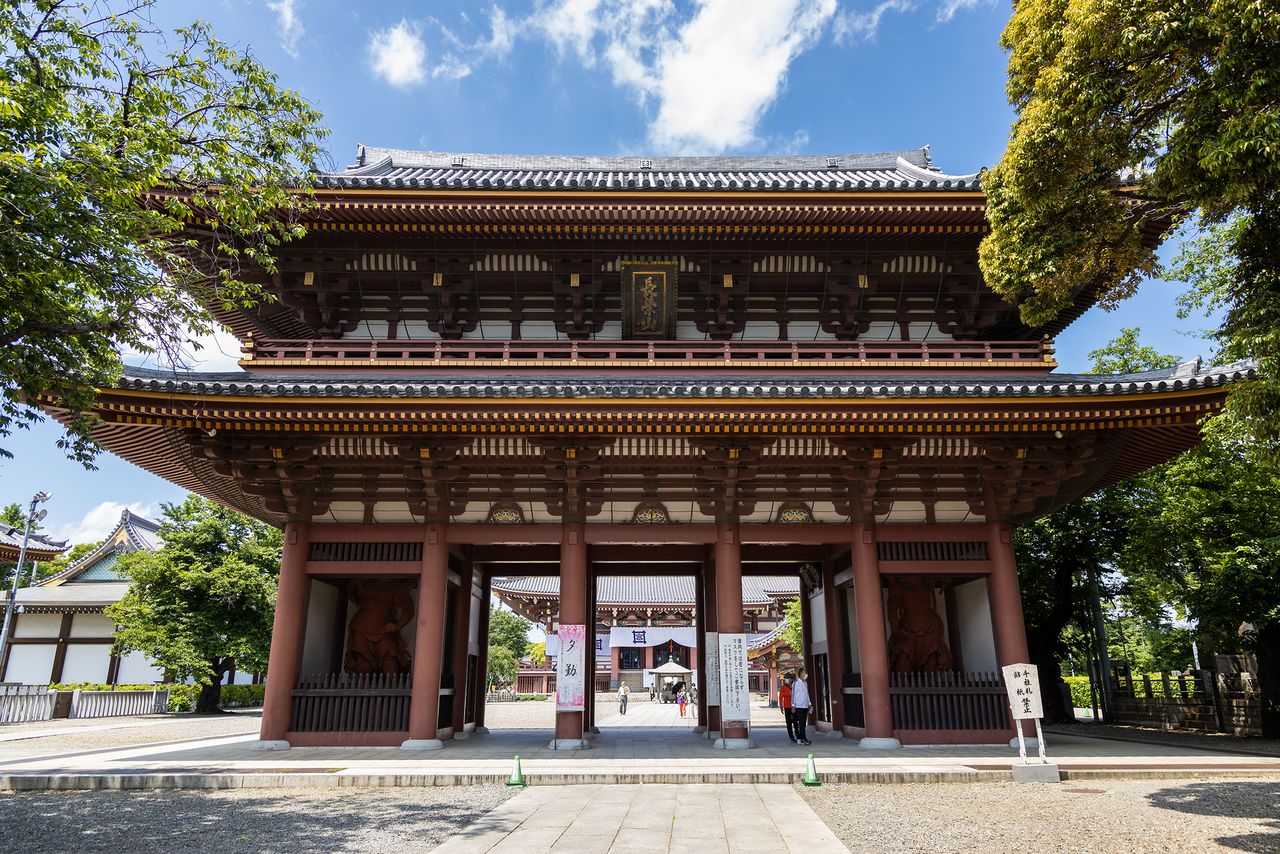 Ikegami Honmonji began as a private temple, the Hokkedō, that stood on the estate of Kamakura shogunate vassal Ikegami Munenaka. Ikegami was a supporter of Nichiren. When the priest returned to Kamakura from the remote island of Sado, where he had been exiled, in 1274, he paid a visit to the property, renaming the tiny hall Chōeizan, “a place where the Lotus Sutra may long flourish.”

That same year, Nichiren, having given up trying to win the authorities over to his teachings, withdrew to Mount Minobe in present-day Yamanashi Prefecture. He continued to preach, but the frigid winters there took their toll, and in September 1282, he set out for a hot spring in the province of Hitachi (now Ibaraki Prefecture) to restore his health. On the way there, his condition took a turn for the worse and the priest expired on October 13 at Ikegami’s estate.

After Nichiren’s death, Ikegami donated a substantial part of his property, including the land on which the Hokkedō stood, to Nichiren’s desciples. The hall eventually grew into a temple complex and was renamed Ikegami Honmonji. Ikegami’s residence, where Nichiren died, became Honmonji’s main subsidiary temple Hongyōji, which remains an independent Nichiren head temple today. 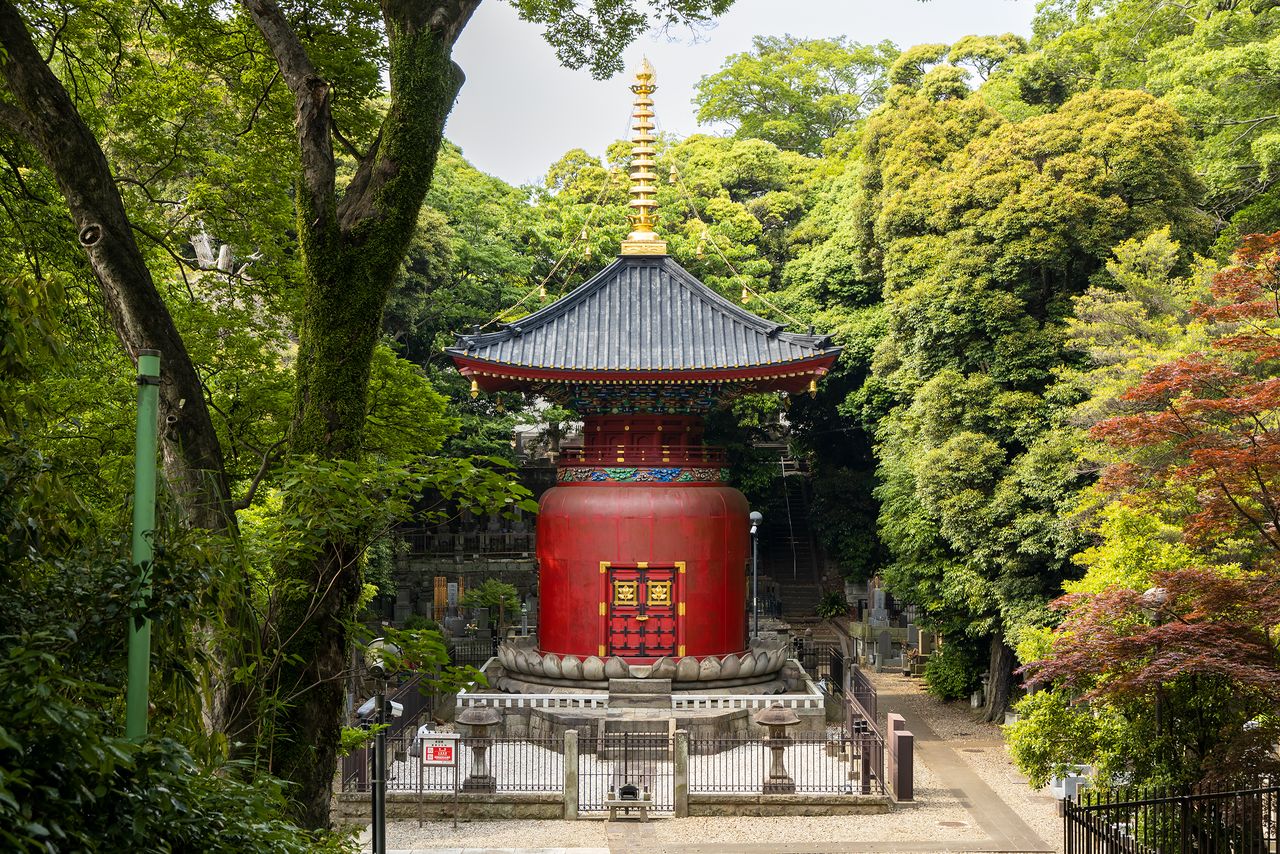 The two-story pagoda, an important cultural property, was erected in 1828 on the site of Nichiren’s cremation. 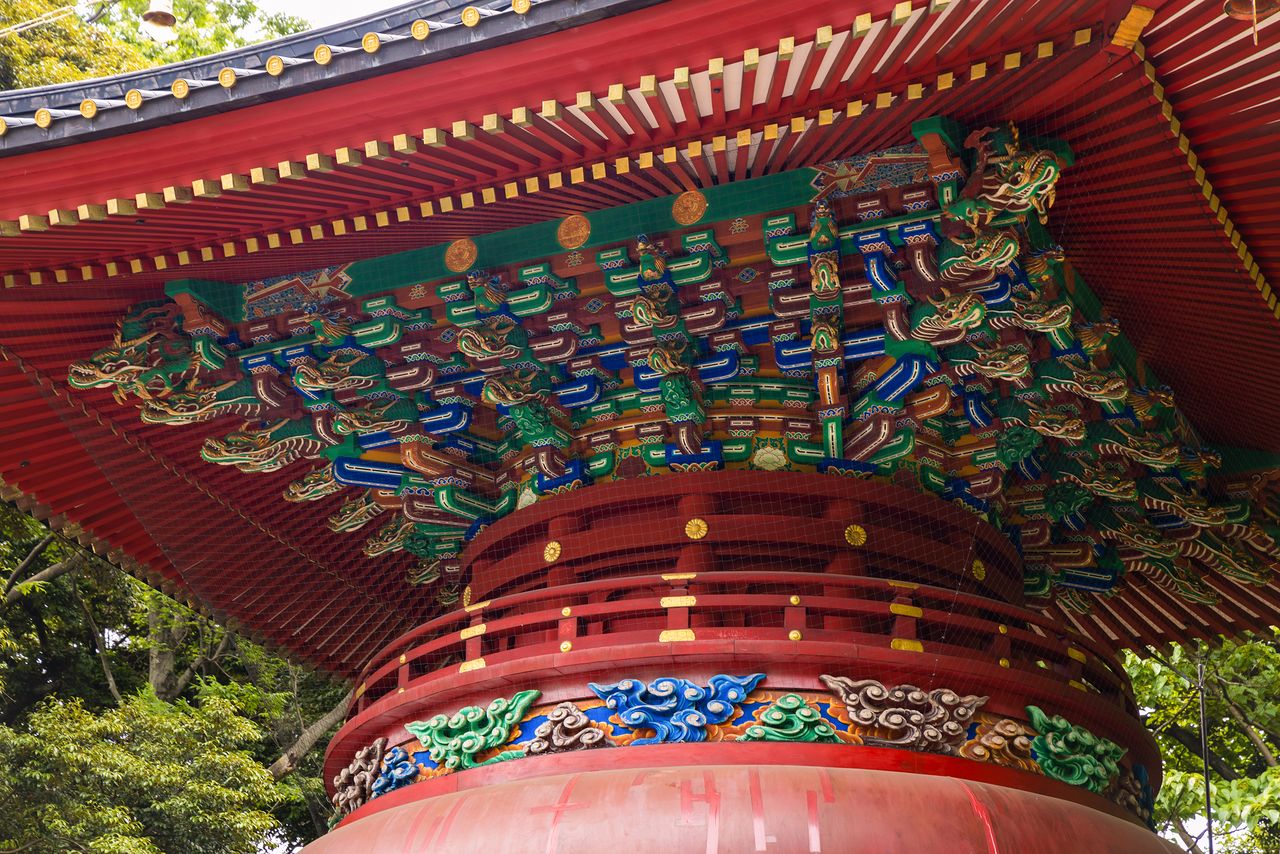 The two-story pagoda’s brilliantly colored ornamentation brings to mind the architectural style of the Nikkō Tōshōgū in Tochigi Prefecture. 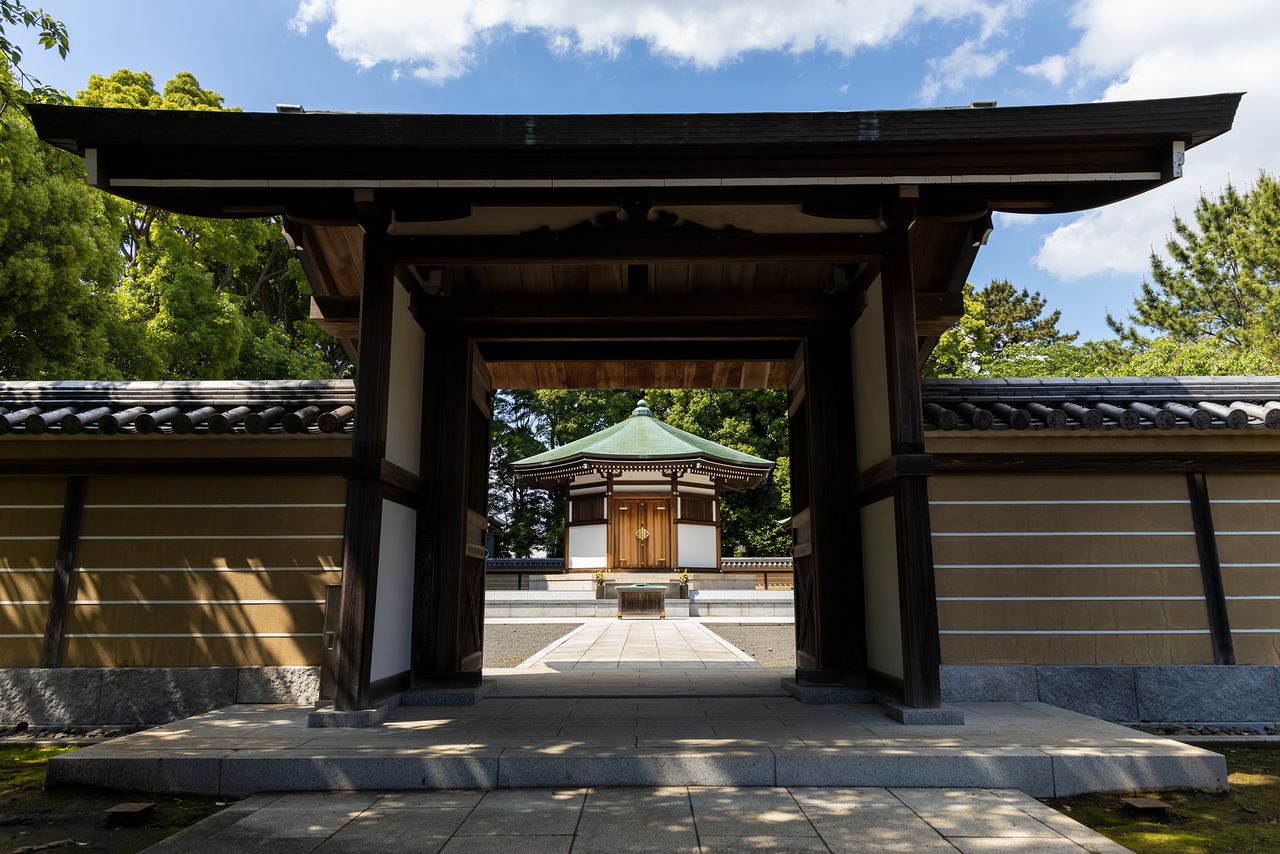 Prosperity Thanks to Powerful Patrons

In accordance with his wishes, Nichiren was cremated at Honmonji and his remains interred at the temple Kuonji on Mount Minobe. Care of Honmonji was entrusted to the chief abbot of Kamakura’s Myōhonji, the oldest Nichiren temple, founded in the thirteenth century by a disciple of Nichiren.

Honmonji’s grand temple buildings were erected during the Edo period (1603–1868). Tokugawa Ieyasu moved from the lands he controlled in and around today’s Shizuoka Prefecture to establish his base at Edo (now Tokyo) in 1590. Honmonji’s head priest, realizing that this signaled Ieyasu’s rising influence, moved the temple’s functions from Kamakura to Honmonji. This action gained the trust of the authorities, and over the next centuries, Honmonji enjoyed the protection of the Tokugawa shōguns and many influential daimyōs.

The original Daidō no longer exists, but its grand stone staircase remains. Built by Katō Kiyomasa (1562–1611), master castle builder and head of the Higo domain (today Kumamoto Prefecture), it takes visitors up the hill to the temple complex. The five-story pagoda, completed in 1608, was donated by second Tokugawa shōgun Hidetada in gratitude after recovering from an illness. Devout followers of the temple included the Kishū branch of the Tokugawa family, the Maeda clan, who ruled the Kaga domain (today Ishikawa Prefecture), and other powerful figures. 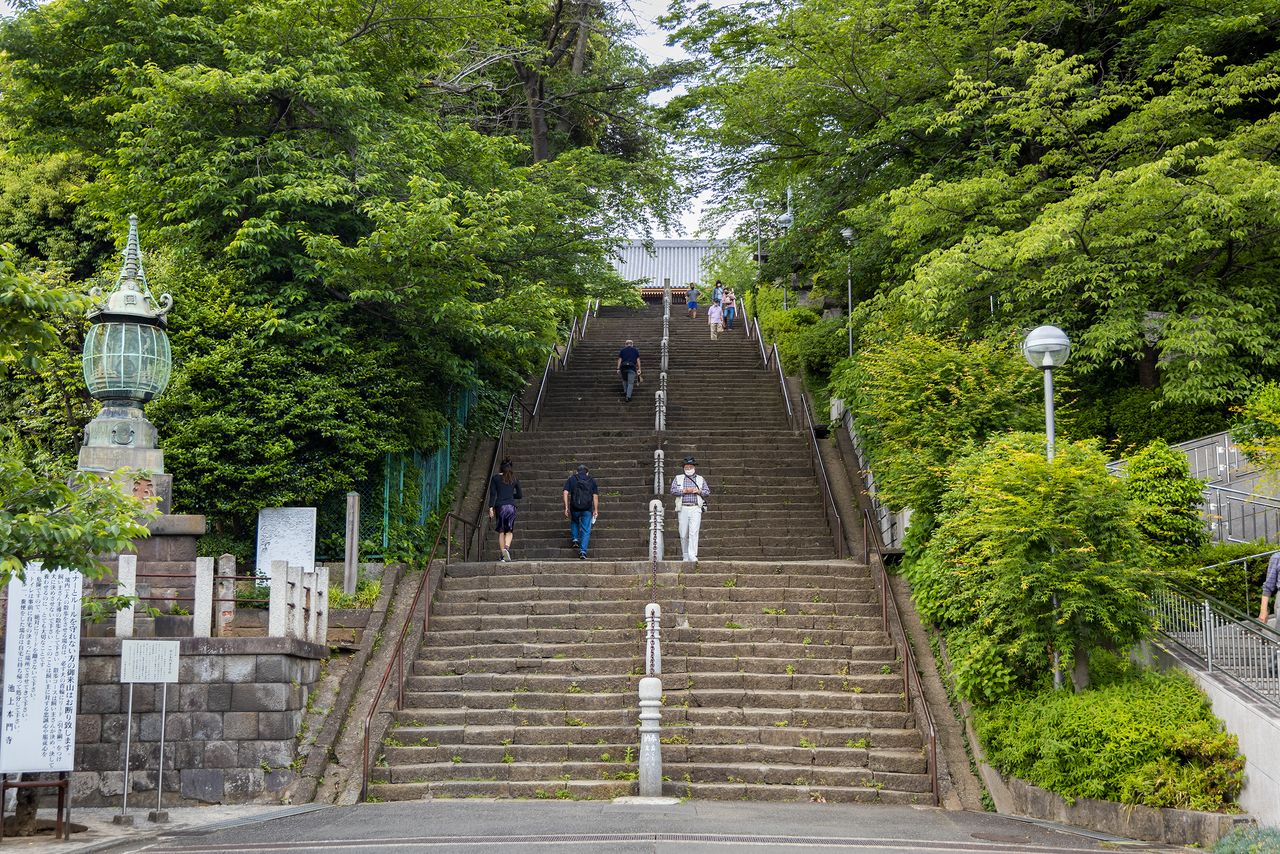 The 96-step stone stairway was built by Katō Kiyomasa. 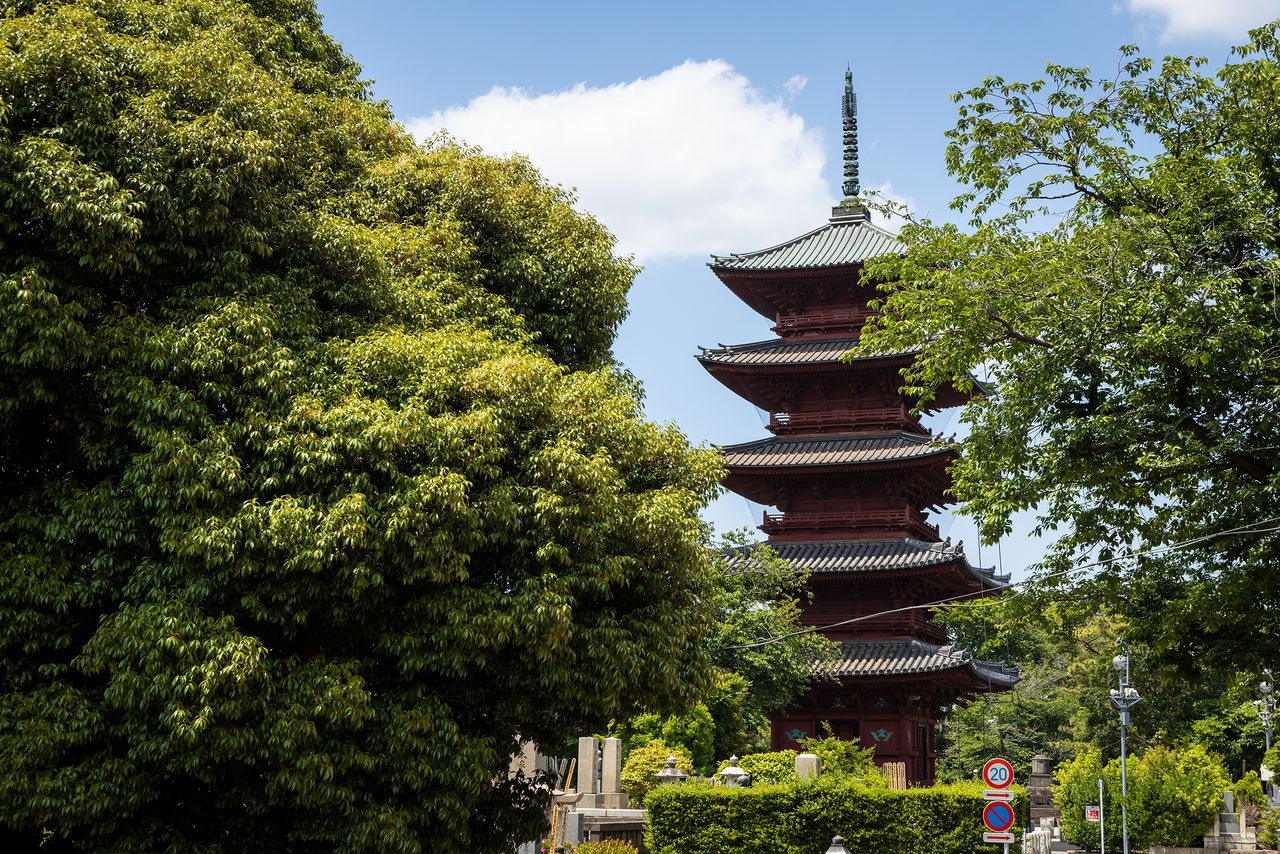 The pagoda was erected at the wish of shōgun Tokugawa Hidetada’s wet nurse Okabe no Tsubone. 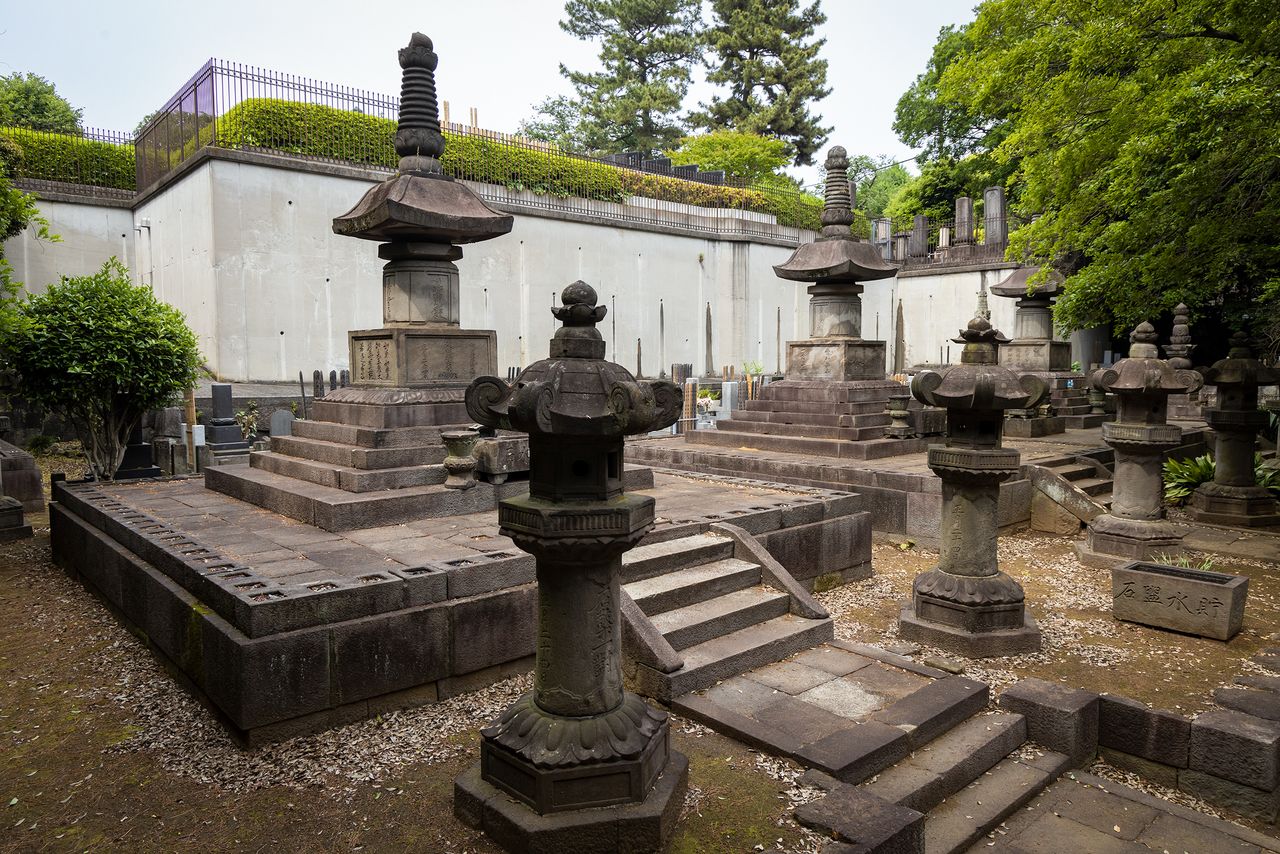 The site is the final resting place for many women of the Kishū branch of the Tokugawa family, including Oman no Kata, the concubine of first shōgun Tokugawa Ieyasu.

Nichiren’s teachings based on the Lotus Sutra also resonated with artists, entertainers, and literary figures of the day. The most notable of these were the members of the Kanō school of Japanese painting, whose members had been supporters of Myōkakuji, the head Nichiren temple in Kyoto, since the Muromachi period (1333–1568). Moving to Edo to become the official painters to the Tokugawa government, they became parishioners of Myōhonji. Kanō Tan’yū, founder of the Edo Kanō school, and his disciples are interred at Myōhonji, and the temple’s Reihōden owns many Kanō school works.

Another Kyoto-based artist, renowned calligrapher Hon’ami Kōetsu (1558–1637), moved to Tokyo around the same time. He was also a fervent follower of Nichiren and contributed the framed motto that hangs above the temple’s main gate. 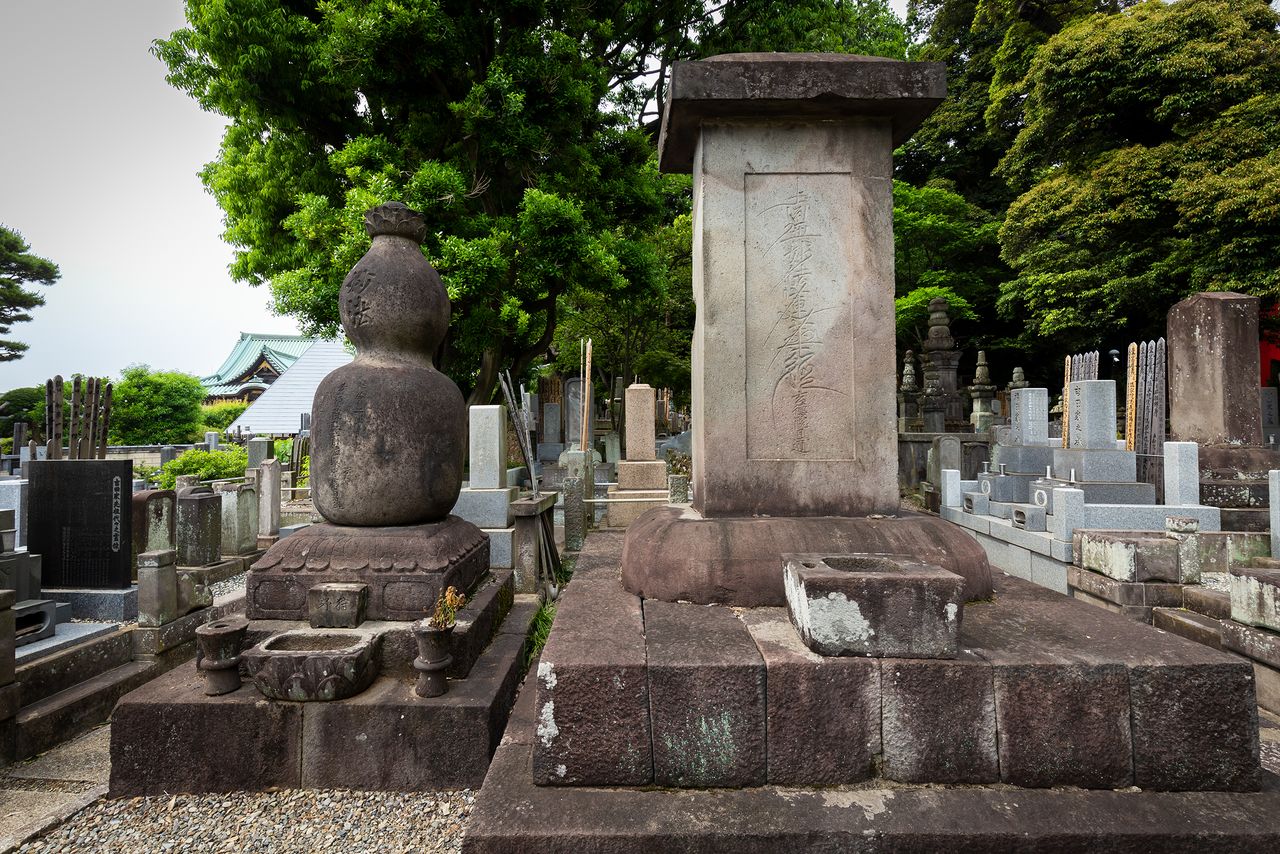 The grave of Kanō Tan’yū, who moved from Kyoto to Tokyo and was the official painter to the shogunate. 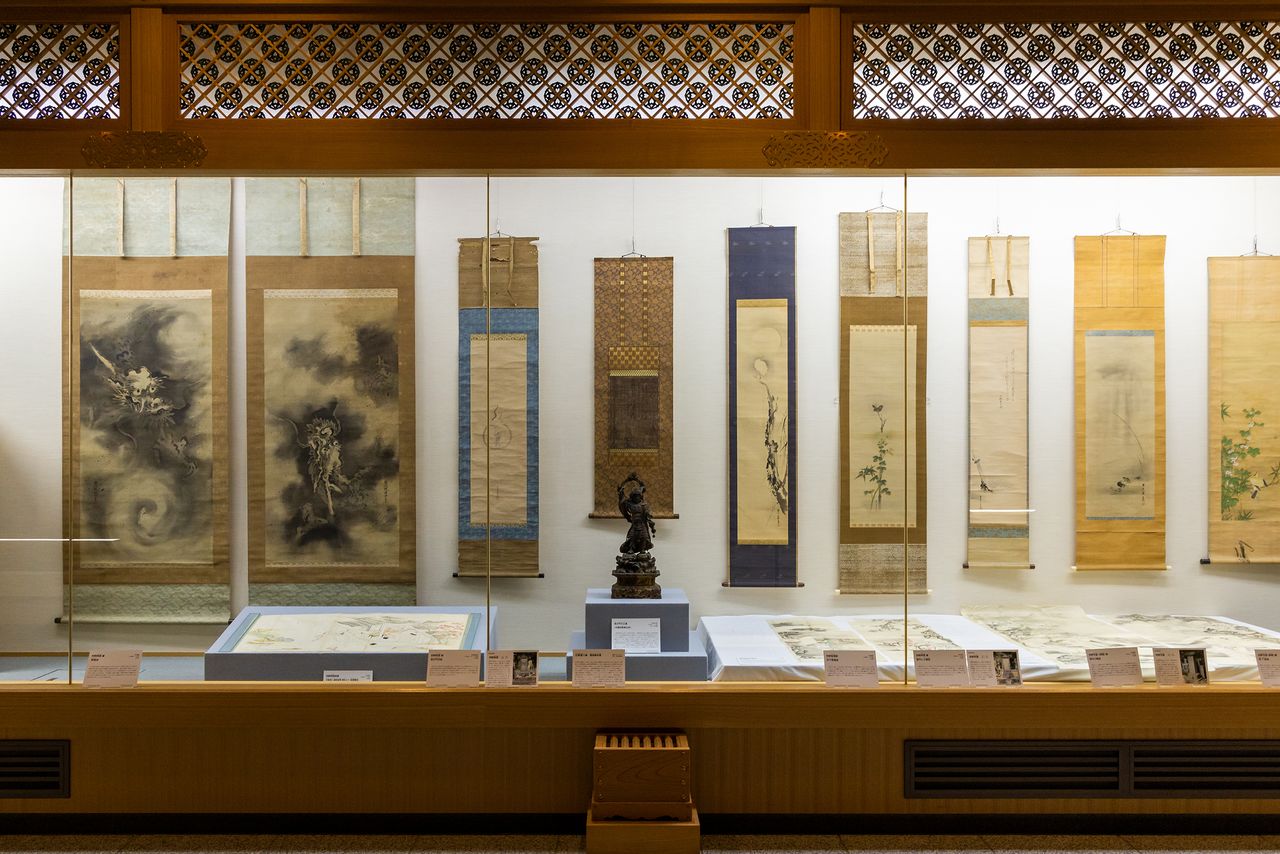 Works by Kanō school painters on display at the Reihōden. 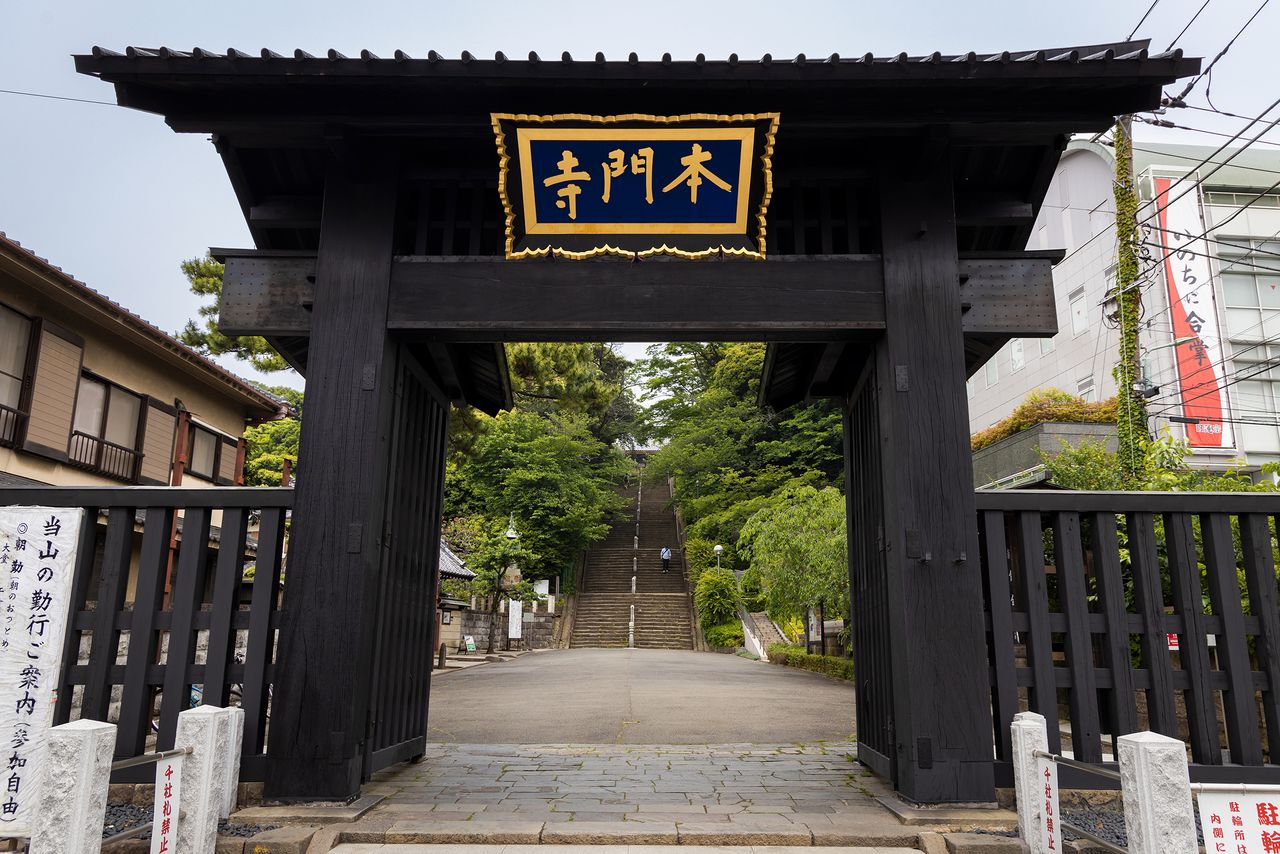 The main gate to the temple was erected during the Genroku period (1688–1709). The 1627 calligraphy by Kōetsu predates it.

A Temple for the People

Nichiren Buddhism drew many adherents among the commonfolk of Edo. In the latter half of the Edo period, when townspeople culture flourished, the late autumn o-eshiki festival, held on the anniversary of Nichiren’s death, became synonymous with Honmonji. October 12, the evening before o-eshiki proper, was especially boisterous, with drums beating and a procession of the faithful bearing decorated lanterns and standards through the streets, as famously depicted in One Hundred Famous Views of Edo and numerous other woodblock prints by Utagawa Hiroshige (1797–1858).

Japanese history buffs are also familiar with the role that Honmonji played at a decisive moment in the nation’s history. The temple served as the headquarters for imperial forces advancing on Edo Castle during the Boshin Civil War between pro-emperor and pro-shōgun factions. It was in the temple’s garden, the Shōtōen, that Katsu Kaishū, negotiator for the shogunate, and Saigō Takamori, head of the imperial forces, arranged for the peaceful surrender of Edo Castle in April 1868. 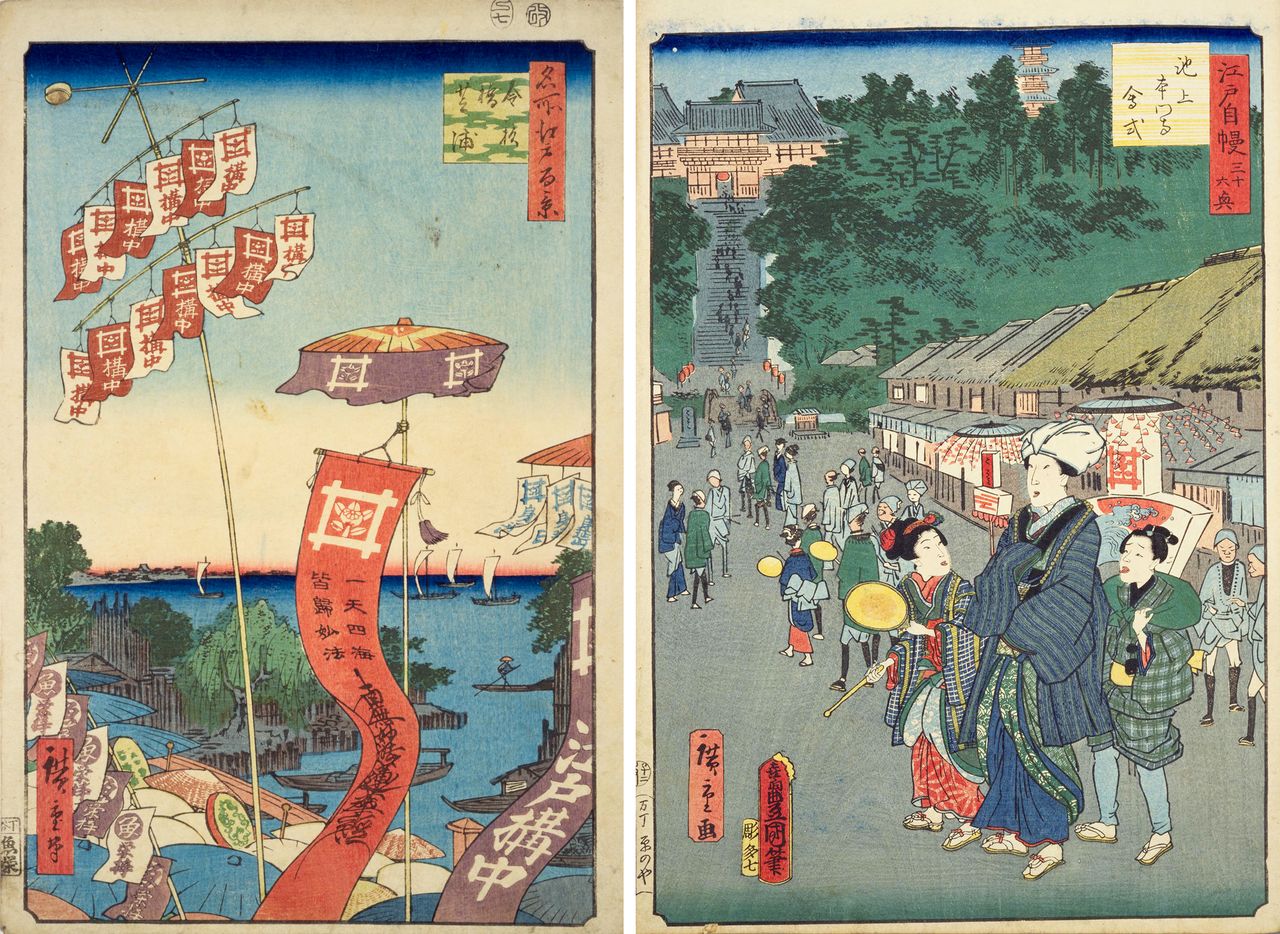 On the left, “Kanasugibashi Shibaura,” a woodblock print dating from 1857 in the One Hundred Famous Views of Edo series by Hiroshige, depicts a crowd heading for o-eshiki. On the right, “O-eshiki at Honmonji,” part of the Thirty-six Scenes of Edo, printed in 1864. Hiroshige II (1826–1869) drew the background and Utagawa Kunisada (1786–1864) provided the human figures. (Property of the National Diet Library) 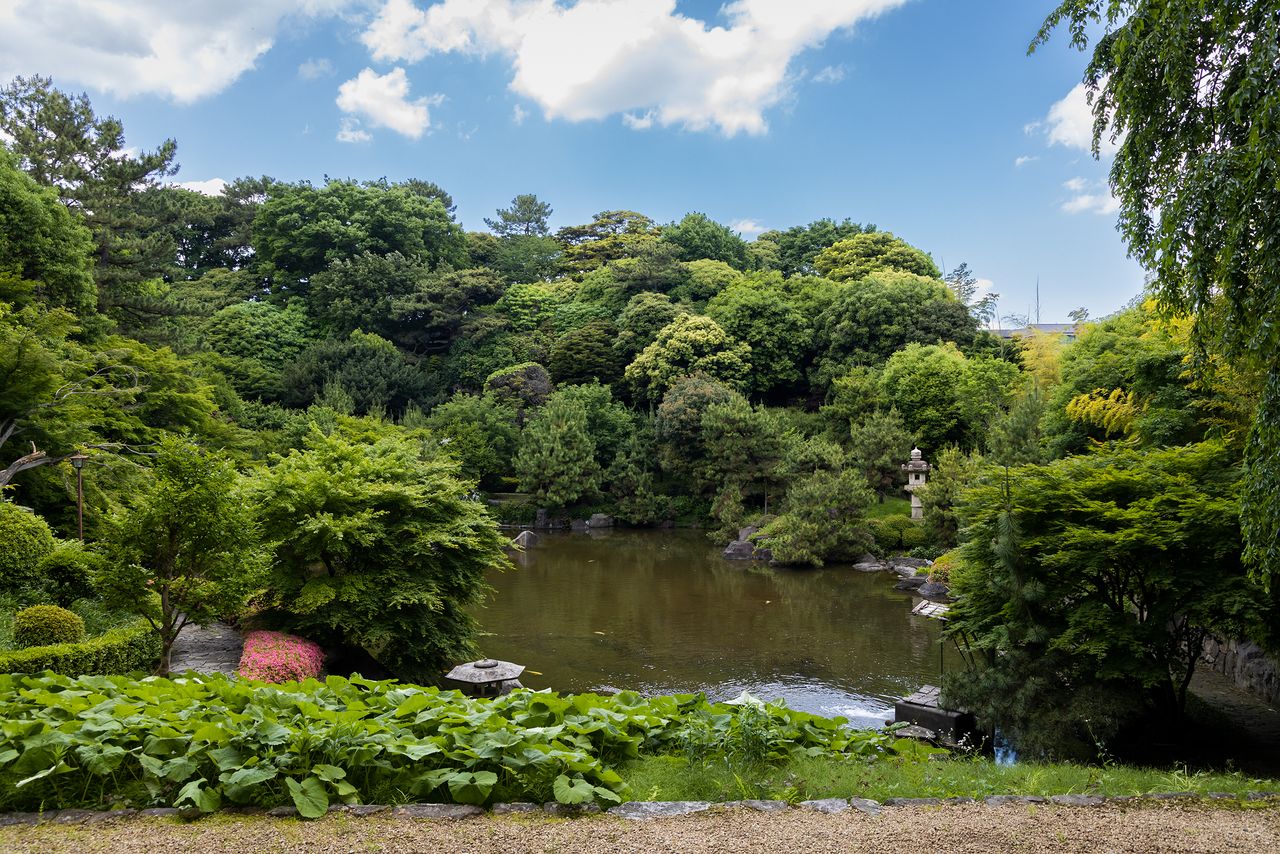 The Shōtōen is open to the public only at certain times of the year. Saigō and Katsu conferred under the pergola visible across the water.

Edo was thus spared major damage in that conflict, but the April 15, 1945, firebombing of Tokyo during World War II destroyed 56 structures in the temple complex. The two pagodas, the main gate, and the sutra repository came through unscathed, however, and temple priests worked valiantly to save the seated figure of Nichiren and writings in his own hand from destruction. The Daidō and the Niōmon were later rebuilt, and a Shakaden main hall and the Reihōden were newly constructed, returning the temple to its former glory.

Eight centuries have passed since Nichiren’s birth. Although elaborate eight-hundredth anniversary ceremonies had been planned for the occasion, prayer services were scaled back due to the COVID-19 pandemic. The o-eshiki procession, cancelled for three years running, is scheduled to go ahead this year, and hopes are that the event will draw many visitors to Honmonji, where they can learn more about Nichiren’s teachings.

Reihōden curator Andō explains that “simply put, the Lotus Sutra teaches that peace will come if we are mindful of others’ happiness and live righteous lives. Times may be bleak today, but I hope that people will harbor these feelings in their hearts as they recite Namu Myōhō Renge Kyō.” 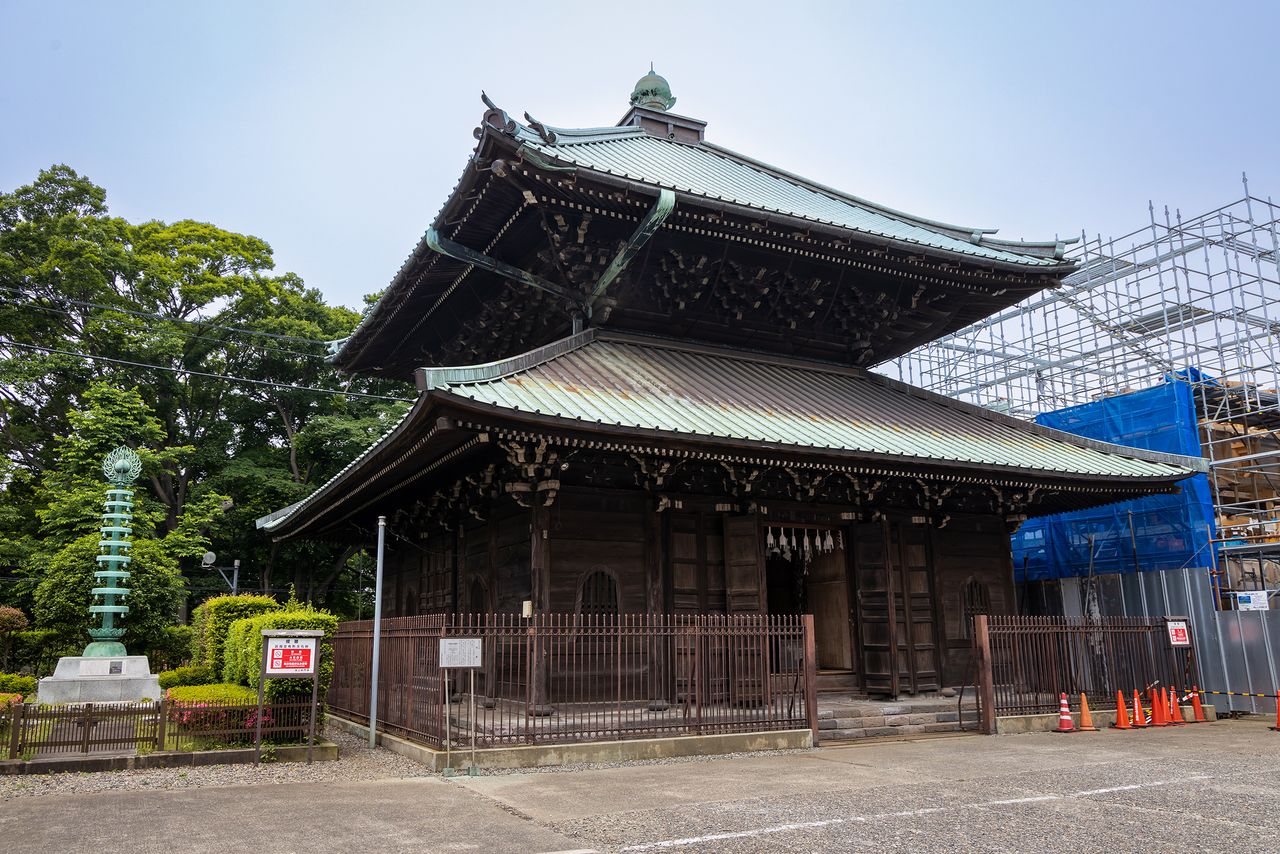 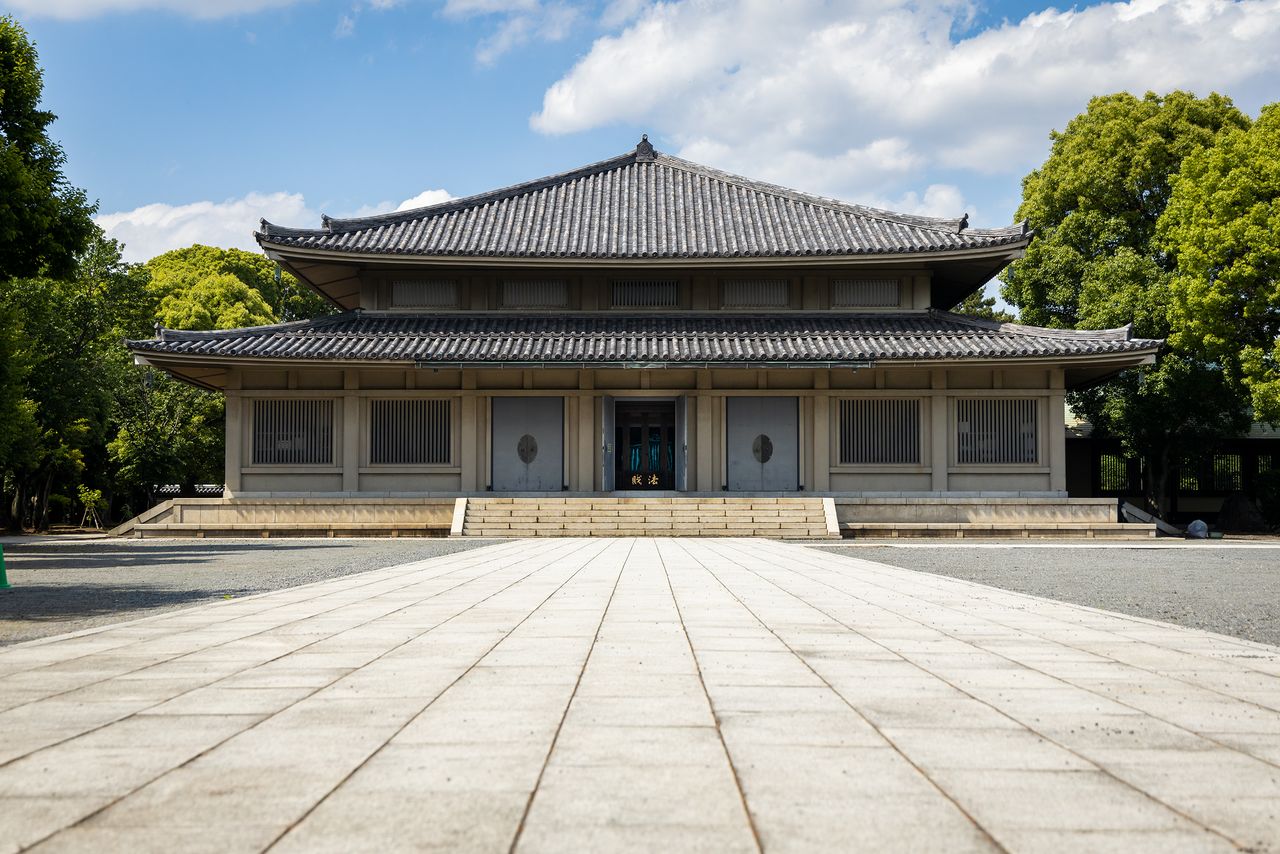 The Shakaden main hall was built in 1969. 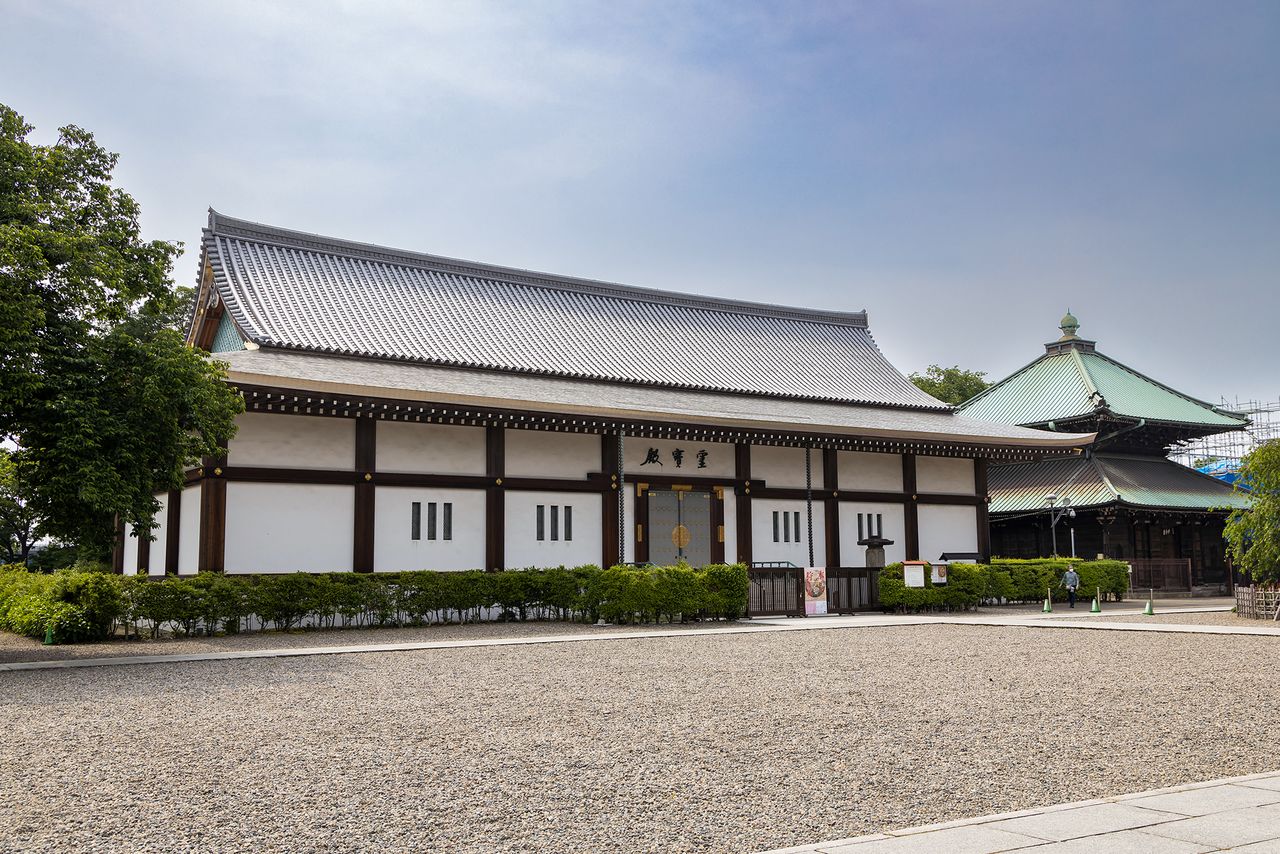 The Reihōden, which opened in 2003, exhibits valuable artifacts belonging to the temple.

(Originally published in Japanese. Reporting, text, and photos, unless otherwise noted, by Nippon.com. Banner photo: The Daidō at Ikegami Honmonji.)