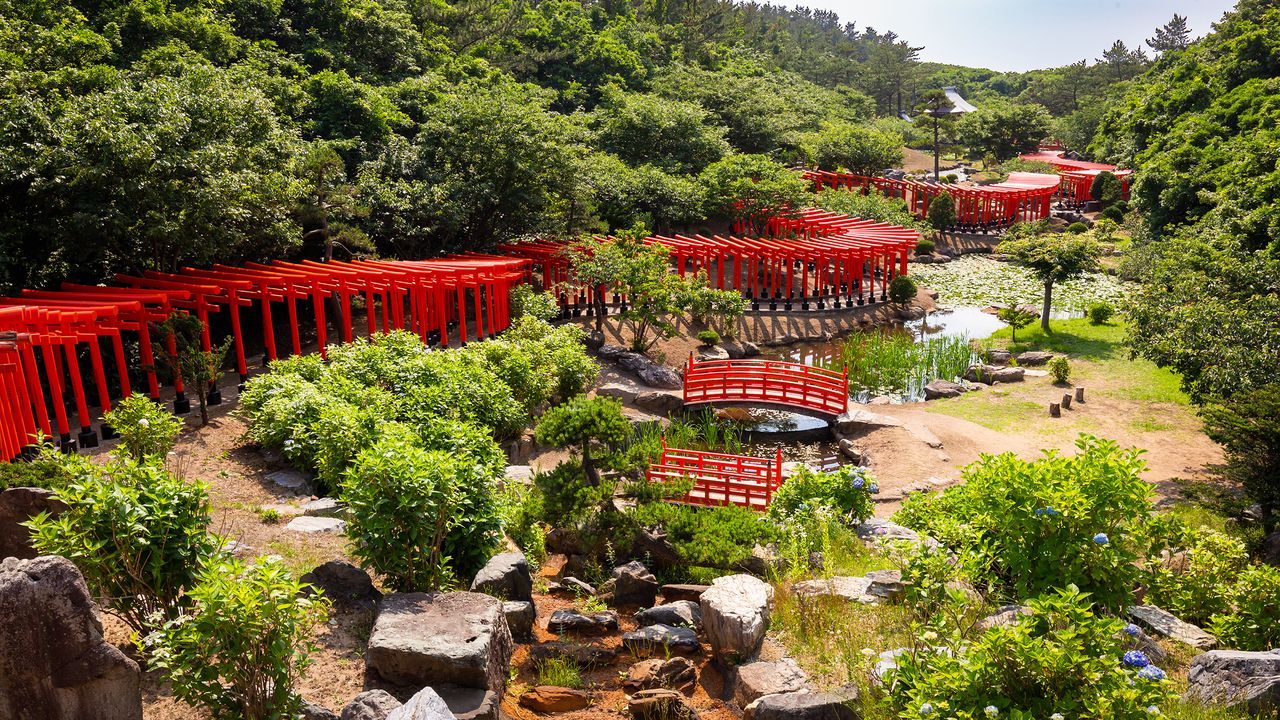 Travel Aug 10, 2022
Takayama Inari Shrine in Aomori Prefecture has gained social media fame with its enchanting beauty. Contrasting the Shintō shrine’s carefully tended Japanese garden are hundreds of vermilion torii snaking along the edge of the forest. Below we share photos highlighting these and other attractions of the remote shrine.

The captivating scene of row upon row of vermillion torii skirting the lush forest and manicured Japanese garden of Takayama Inari Shrine in the city of Tsugaru, Aomori Prefecture, is a sight to behold. Viewed from afar, the sinuous “one-thousand gates” give the impression of a dragon resting on the grounds. 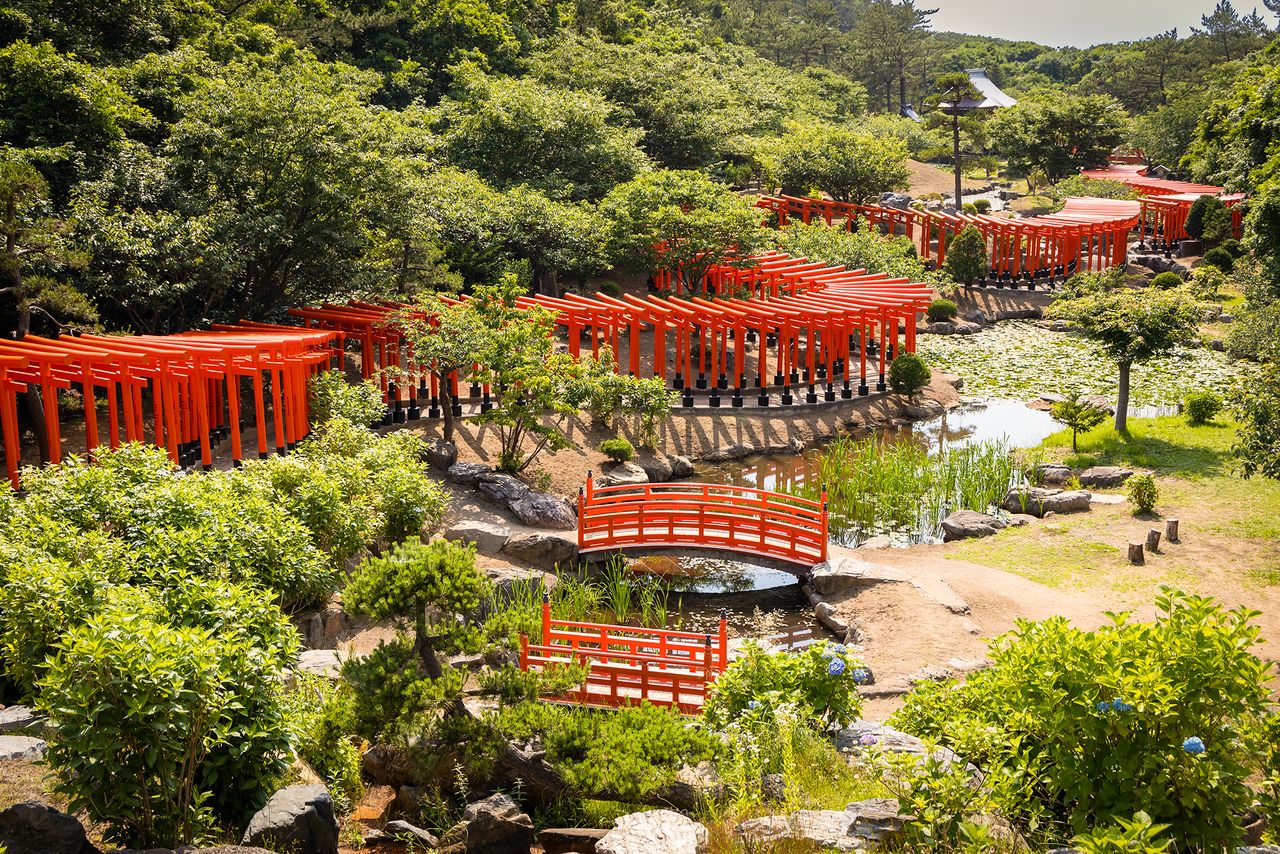 The vermillion senbon torii (one-thousand gates) stands out against the green of the Japanese garden and surrounding forest.

Takayama Inari is said to have been established by the powerful Andō clan that subdued the Tsugaru region during the Kamakura (1185–1333) and Muromachi (1333–1568) periods. It has long drawn the patronage of local residents, who come to pray for a plentiful harvests, maritime safety, and success in business. However, its remote location—the nearest train stop is JR Goshogawara Station, some 30 minutes away by car—kept it off the itinerary of all but the most curious tourists.

This changed in 2016 with the opening of the Hokkaidō Shinkansen between Aomori and Hakodate. Takayama Inari was featured on tourist posters for Aomori Prefecture, attracting droves of visitors who were intrigued by the shrine’s multitude of vermillion torii. Snapshots shared on social media brought even more sightseers, transforming Takayama Inari into a full-fledged tourist attraction. 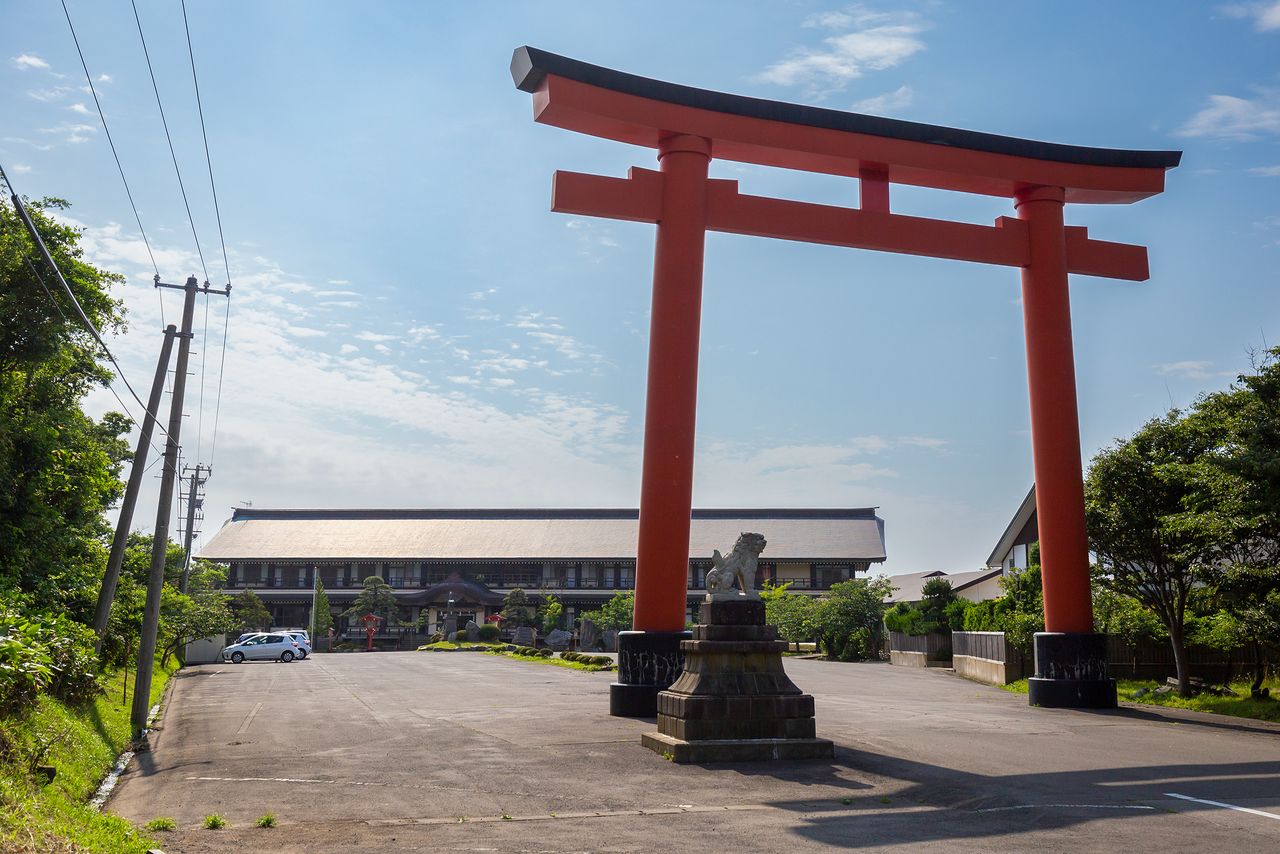 A large torii towers near the entrance of Takayama Inari Shrine. 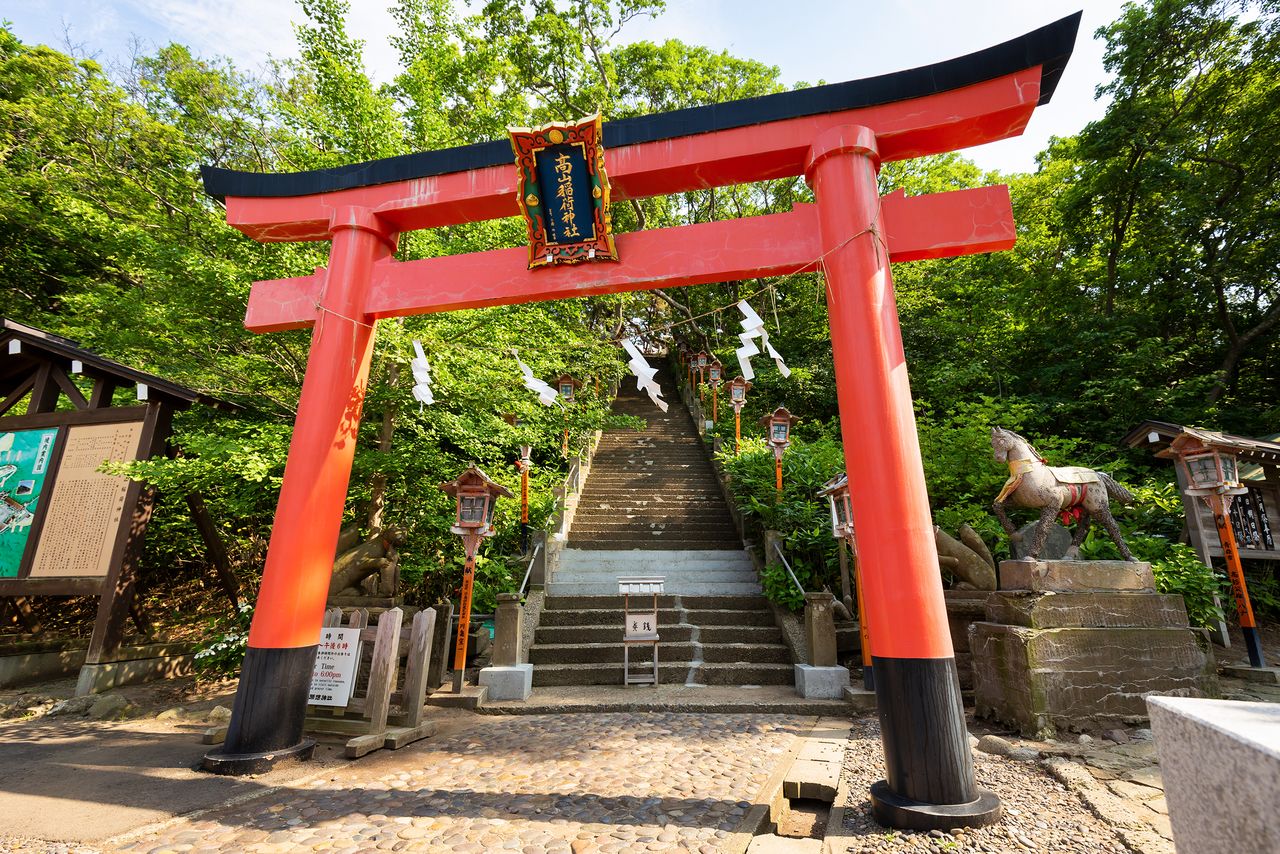 Another large gate stands at the bottom of the steps leading to the haiden, the hall where worshippers pray, and the senbon torii beyond.

The shrine’s famed gates are actually a relatively new addition. Around 40 years ago, local farmers began putting up torii as offerings. The custom quickly caught on, and soon there were more vermillion gates than could be accommodated in a straight line. This, along with the planned construction of a pond in the shrine’s garden, necessitated that the torii be moved. As Takamatsu Inari counts Ryūjin, the dragon god of the sea, among its enshrined deities, it was decided that the gates should be arranged in an undulating fashion reminiscent of the mythical creature. 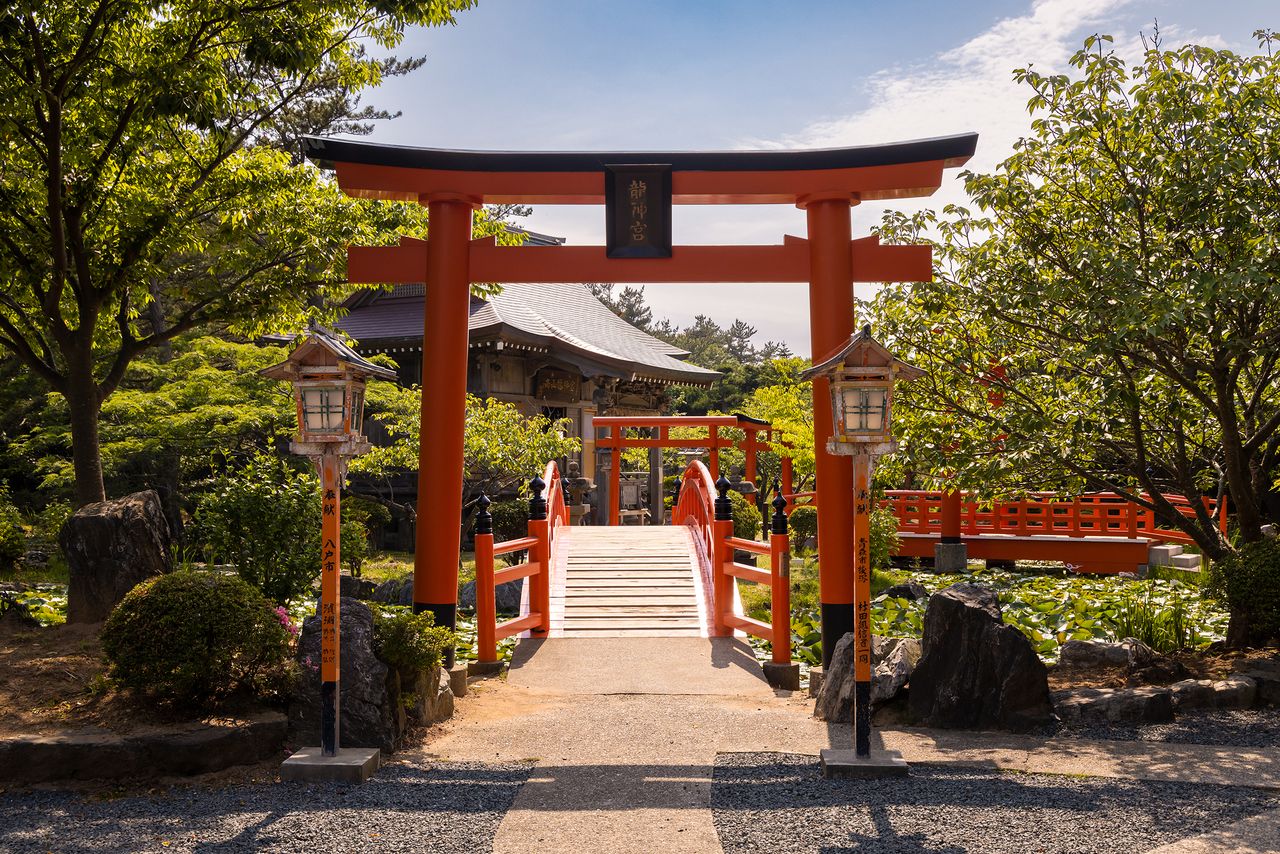 The senbon torii starts at the Ryūjingū, the shrine to the dragon god. 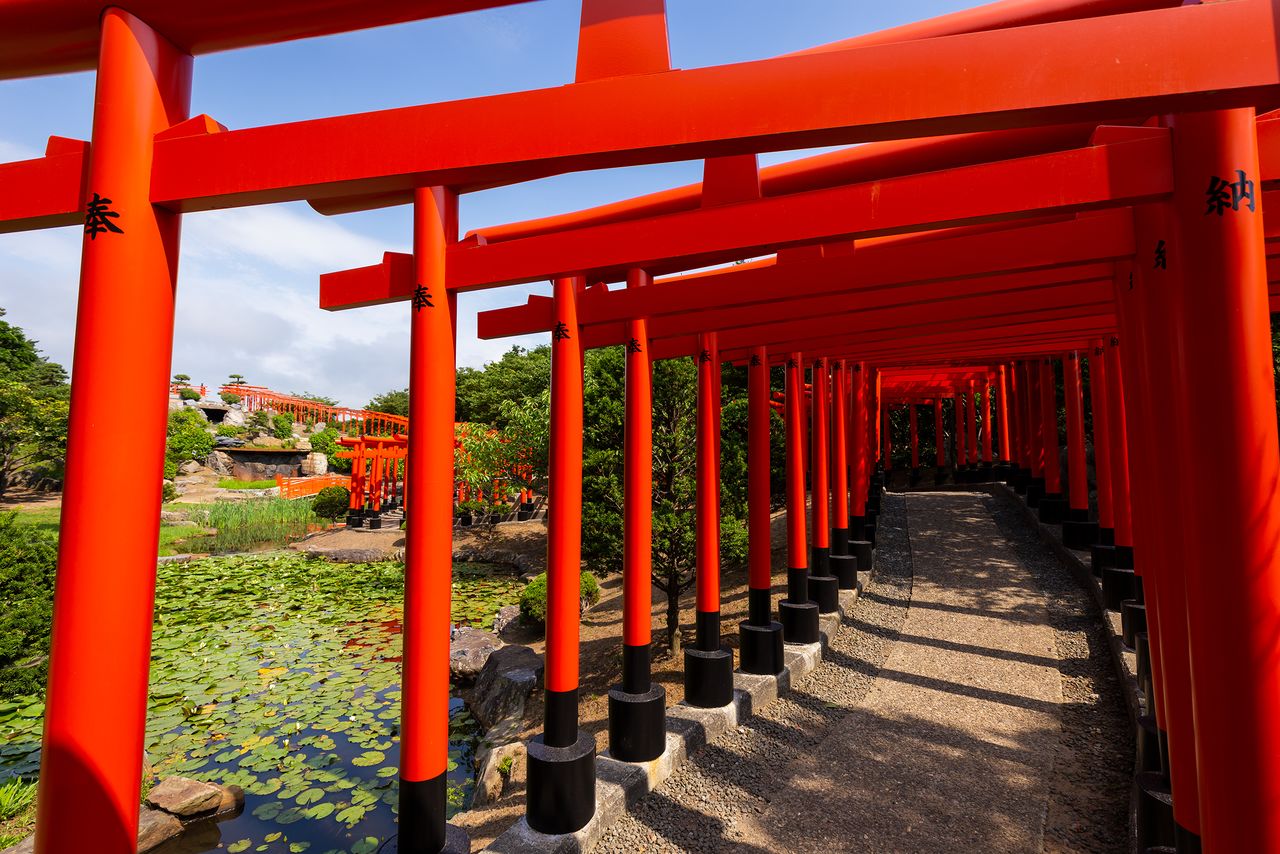 The line of torii passes next to a pond on the grounds, creating a beautiful scene. 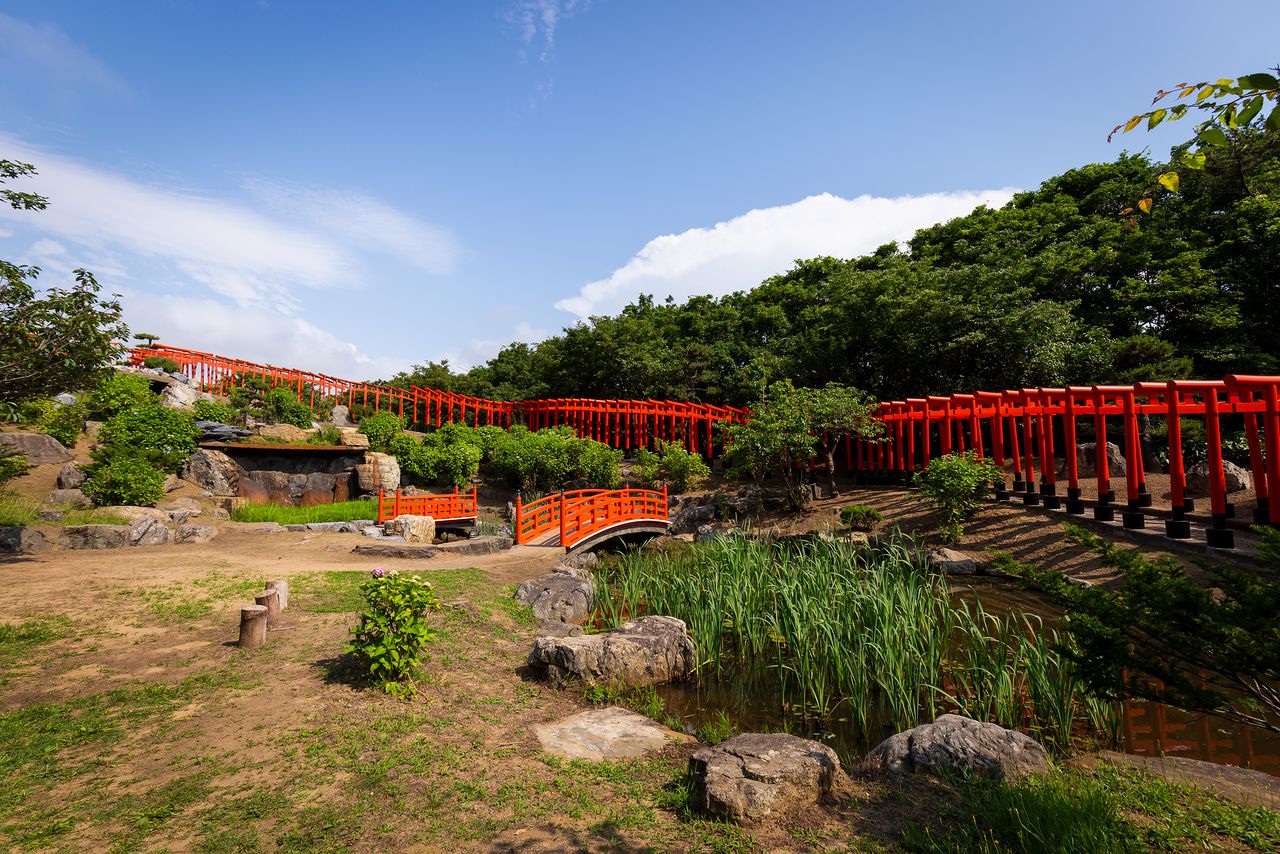 The red gates snake past the pond and climb skyward.

The name “one-thousand gates” is a bit of an exaggeration and is meant to suggest a large amount rather than a set number. In actuality, there are just over 202 torii on display at Takayama Inari Shrine. The harsh winters of Tsugaru and the salt air from the nearby Sea of Japan take a toll on the wooden structures. Repair work is slated to finish in fall 2022, which will boost the shrine’s tally of torii to around 230.

The senbon torii culminates at an observation point, from where visitors can gaze back over the slithering line of gates and view other areas of the shrine grounds. From here, people can offer a prayer on the Shinmei Shrine and pay their respects to a group of stone foxes, animals that are considered to be the messengers of the Inari deity. 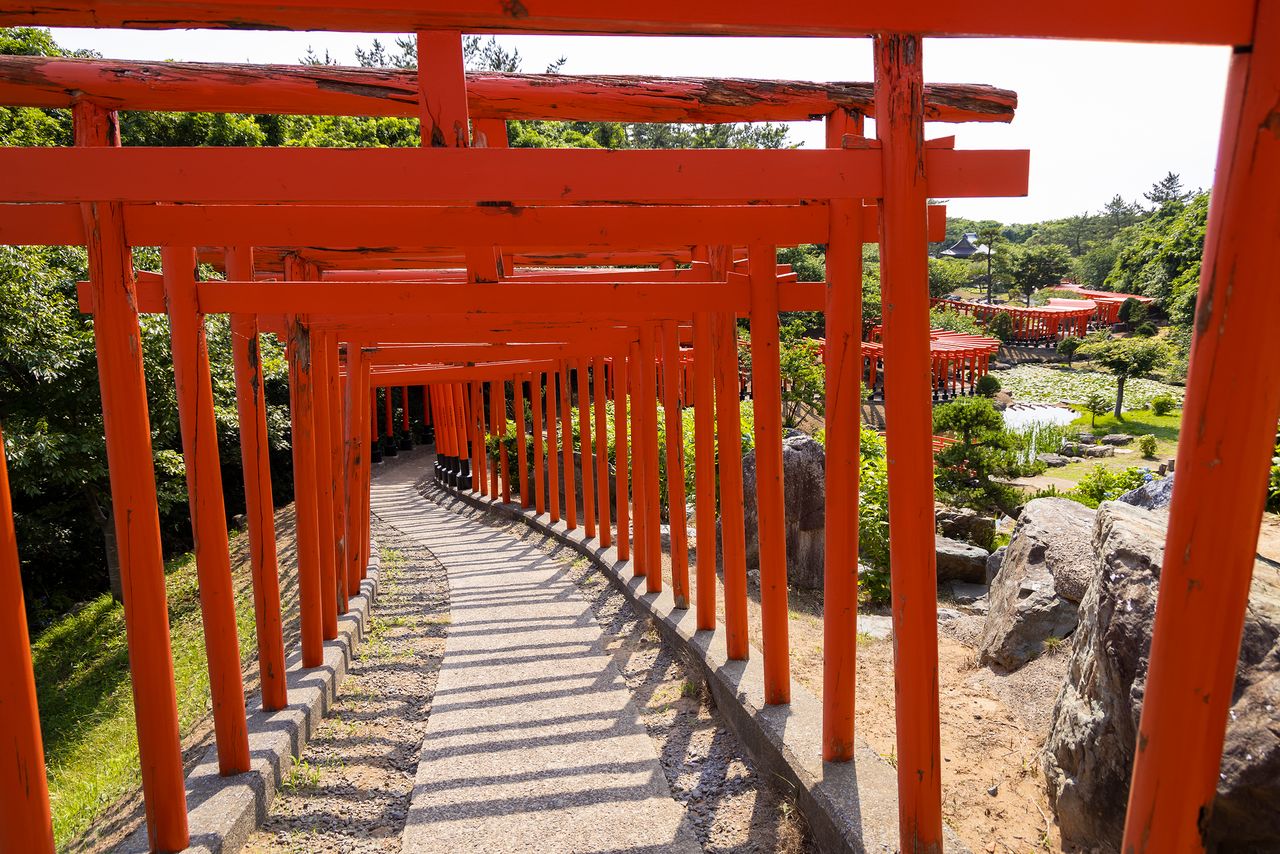 A tunnel of vermillion torii. The gates are protected from the elements by a coat of weatherproof paint. 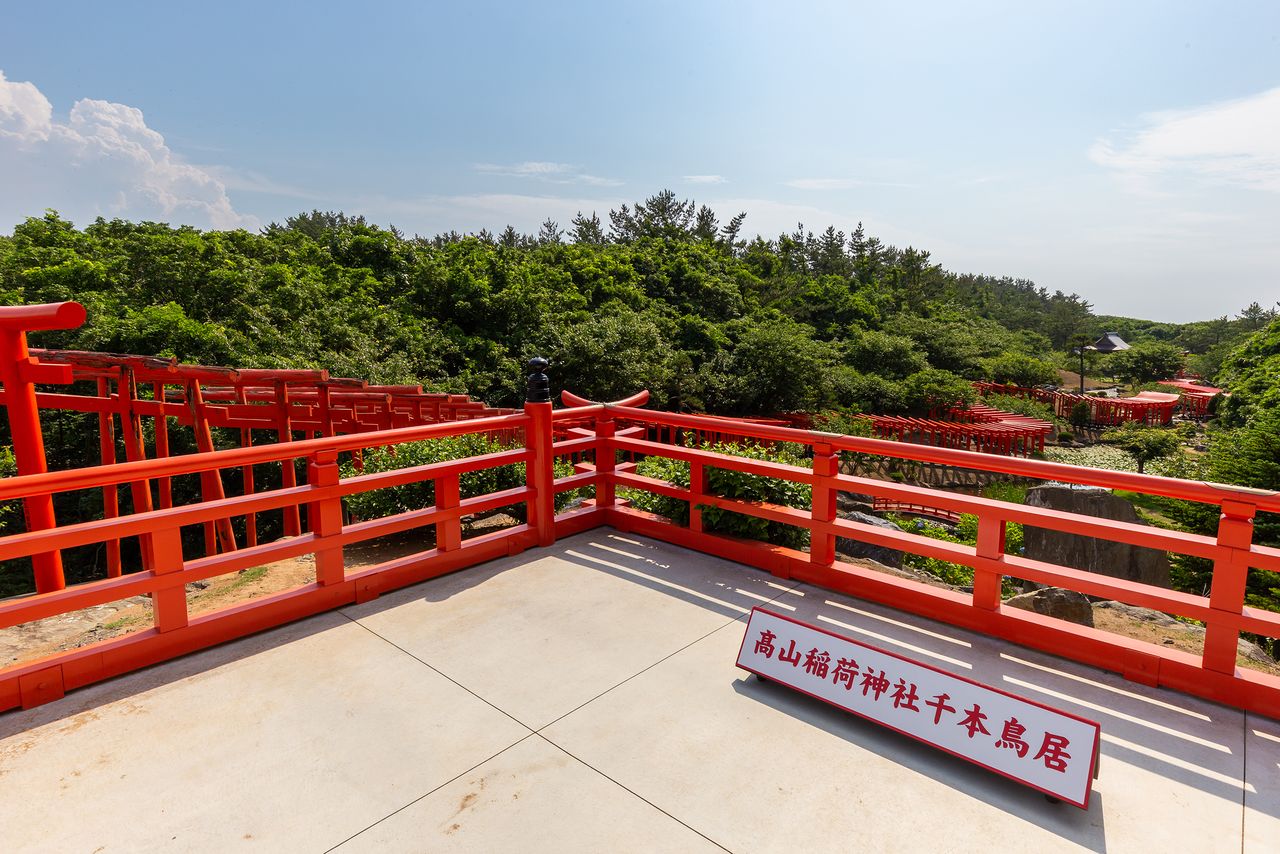 The observation deck is an ideal photo spot. 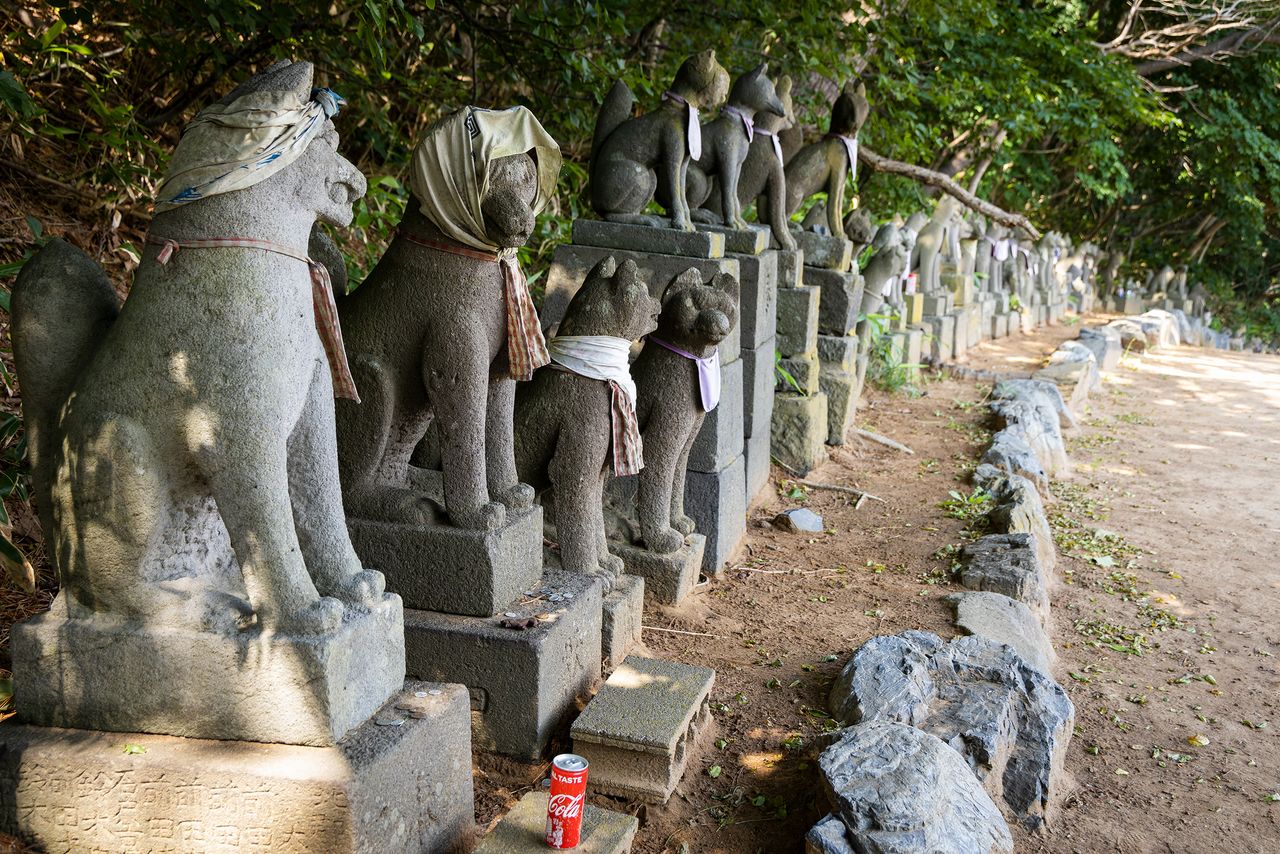 Careful observation reveals the different features of the shrine’s many stone foxes.

The area around Takayama Inari’s haiden at the end of the senbon torii is home to a number of sub-shrines and other structures. The Sannō Shrine boast the unusually designed Sannō torii, and prayers can be offered at Myōbu Shrine for a successful marriage and prosperity. 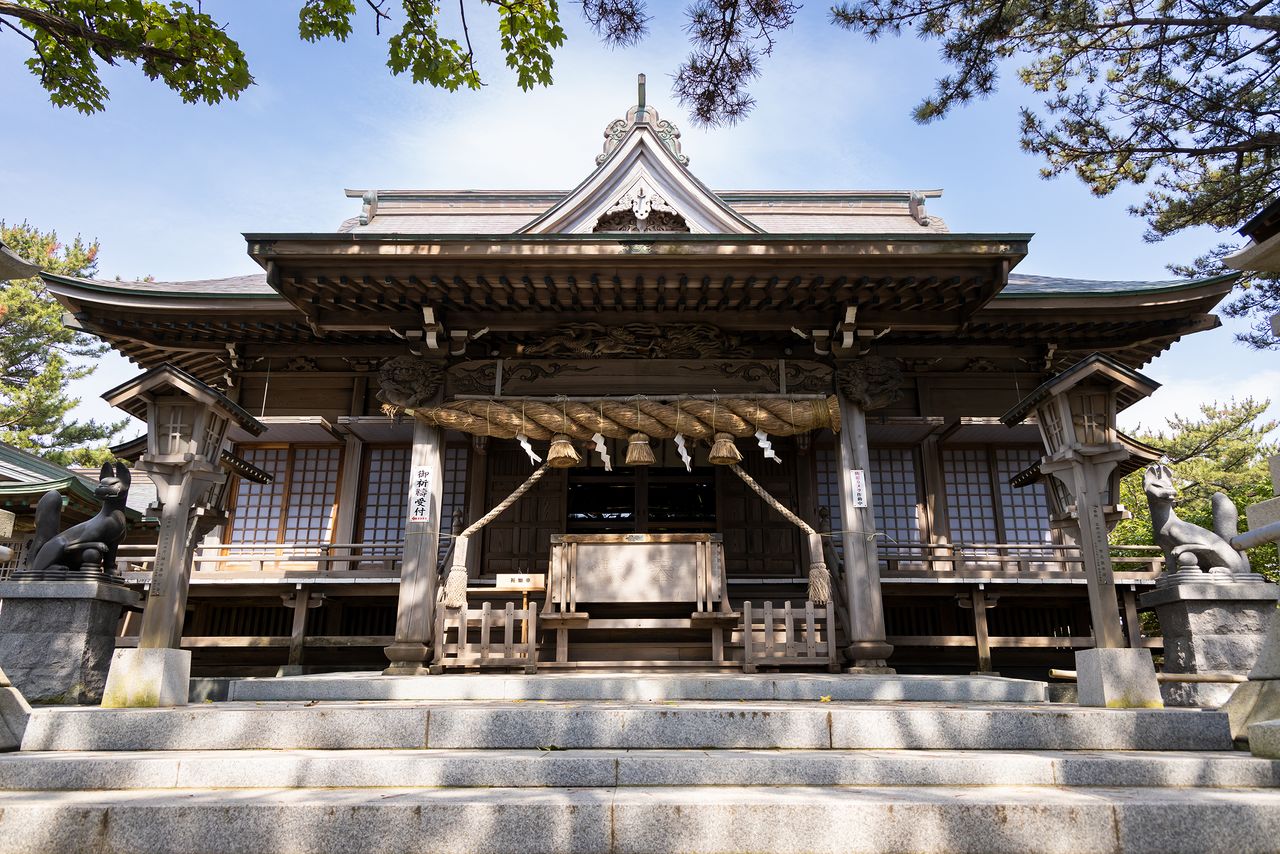 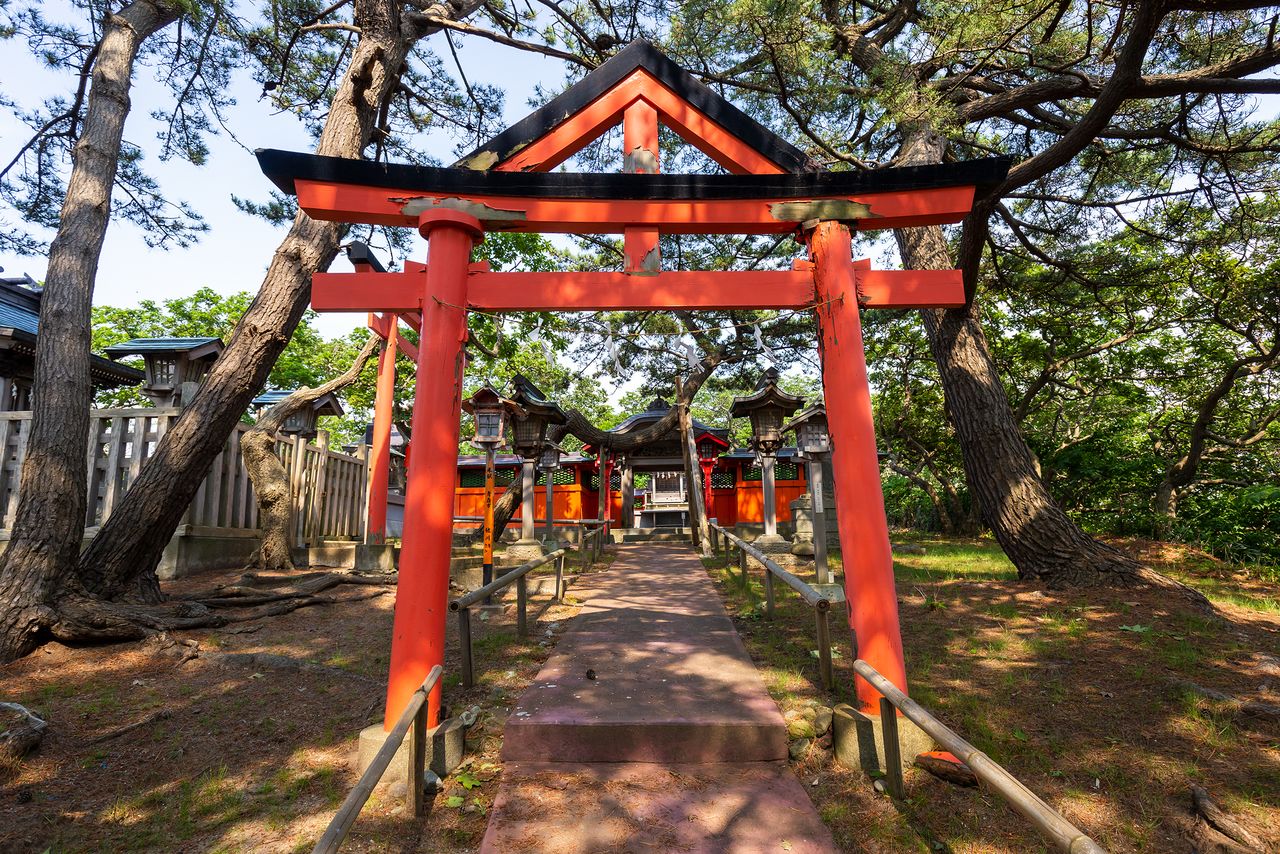 The top of the Sannō gate features a design representing the wind and waves. The Sannō Shrine can be seen in the distance. 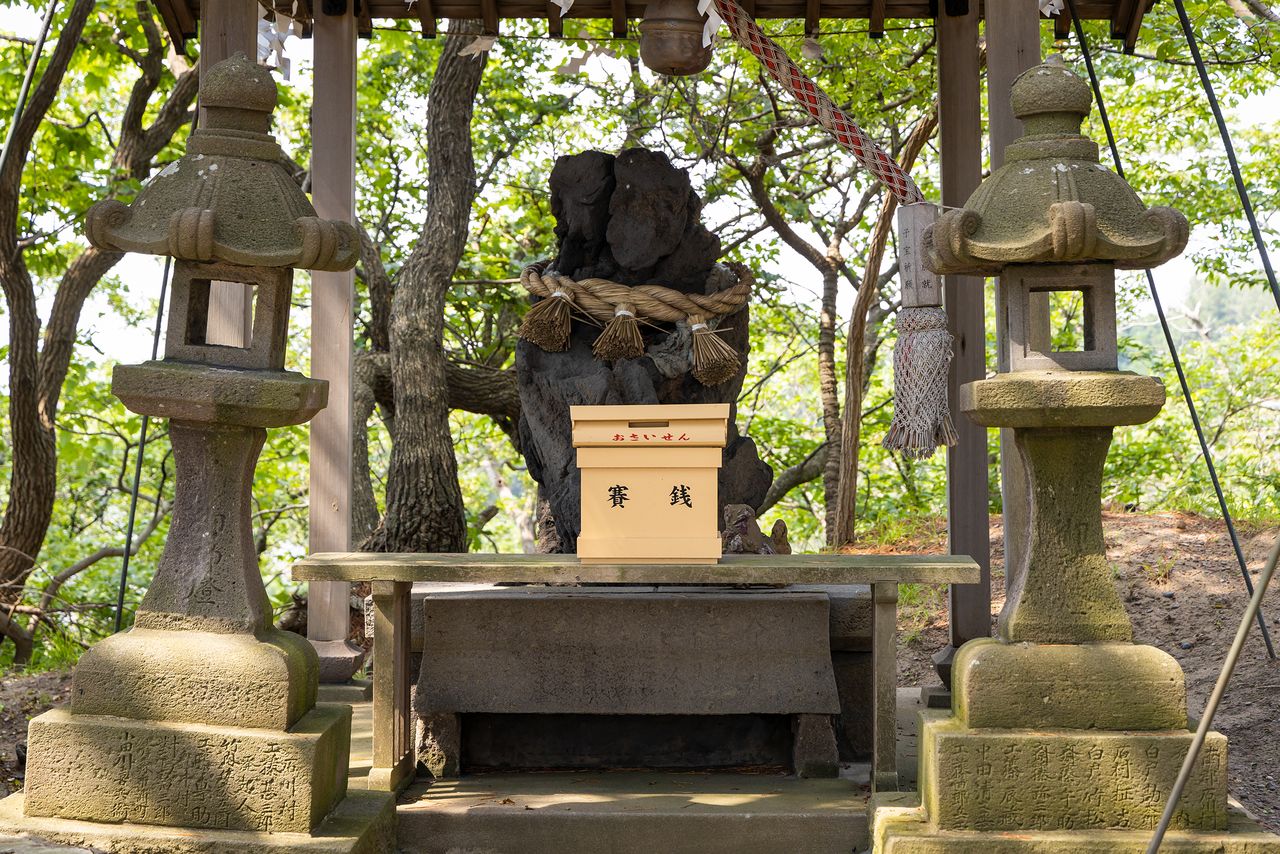 The simple Myōbu Shrine is popular with individuals looking for love.