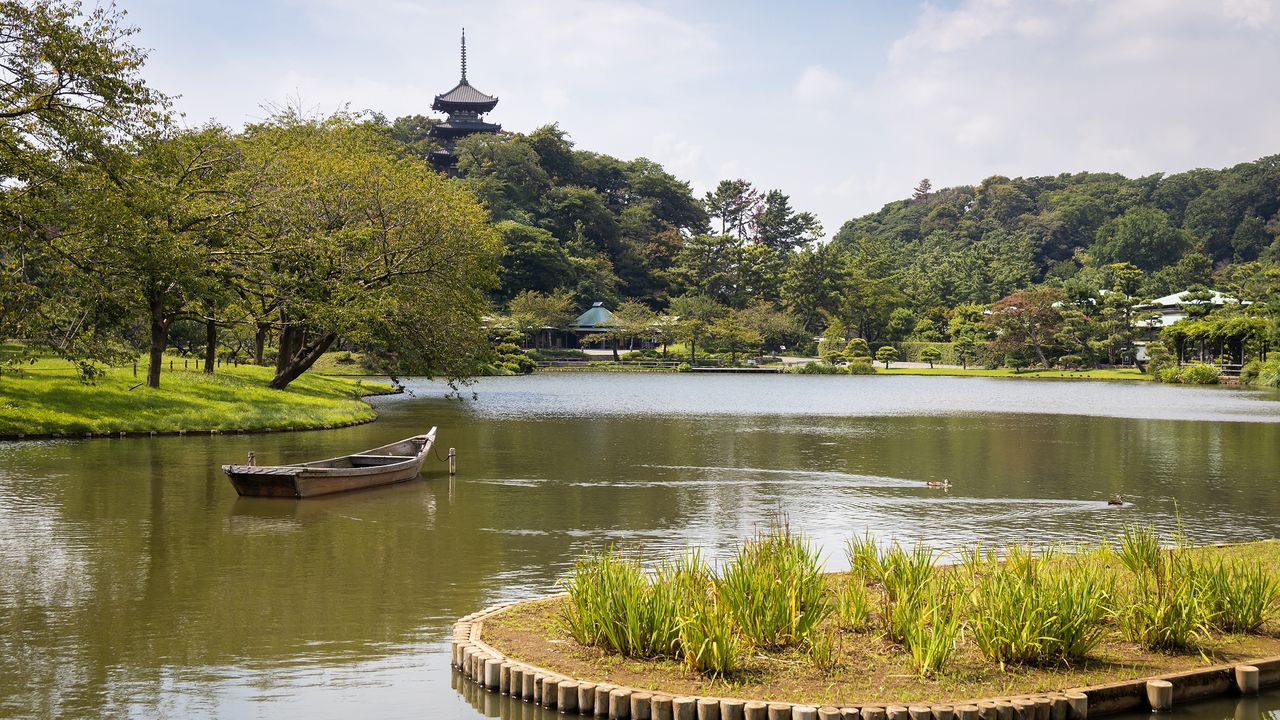 Travel History Oct 21, 2022
The garden Sankeien in Yokohama is designated a site of scenic beauty by the national government. A popular recreation site for residents of the city, its ponds and hillocks offer a beautiful setting for the several historic structures moved to the site from Kyoto and Kamakura. We guide readers through the garden, with its iconic three-story pagoda, newly refurbished Rinshunkaku villa, and other attractions.

Sankeien is a large traditional Japanese garden in Yokohama in Kanagawa Prefecture. Utilizing the natural contours of the site to advantage, the garden, which spreads across 175,000 square meters of land, is filled with seasonal flowers and other foliage and boasts numerous ponds and streams. Set among the natural beauty are 17 historic buildings, including 10 that are designated important national cultural properties. While Yokohama is more generally known as a port that opened Japan to the world in the late nineteenth century and for its strong influence of Western culture, Sankeien is a bastion of traditional Japanese beauty.

The garden marked its centenary in 2022, and on this special occasion Rinshunkaku, the summer villa of the Kii House of the Tokugawa family, was opened to the public for a short period to mark the completion of lengthy renovation work on the structure, which is an important national cultural property. Visitors flocked to enjoy the beauty of Sankeien’s garden, often likened to that of Kyoto’s Katsura Detached Palace. 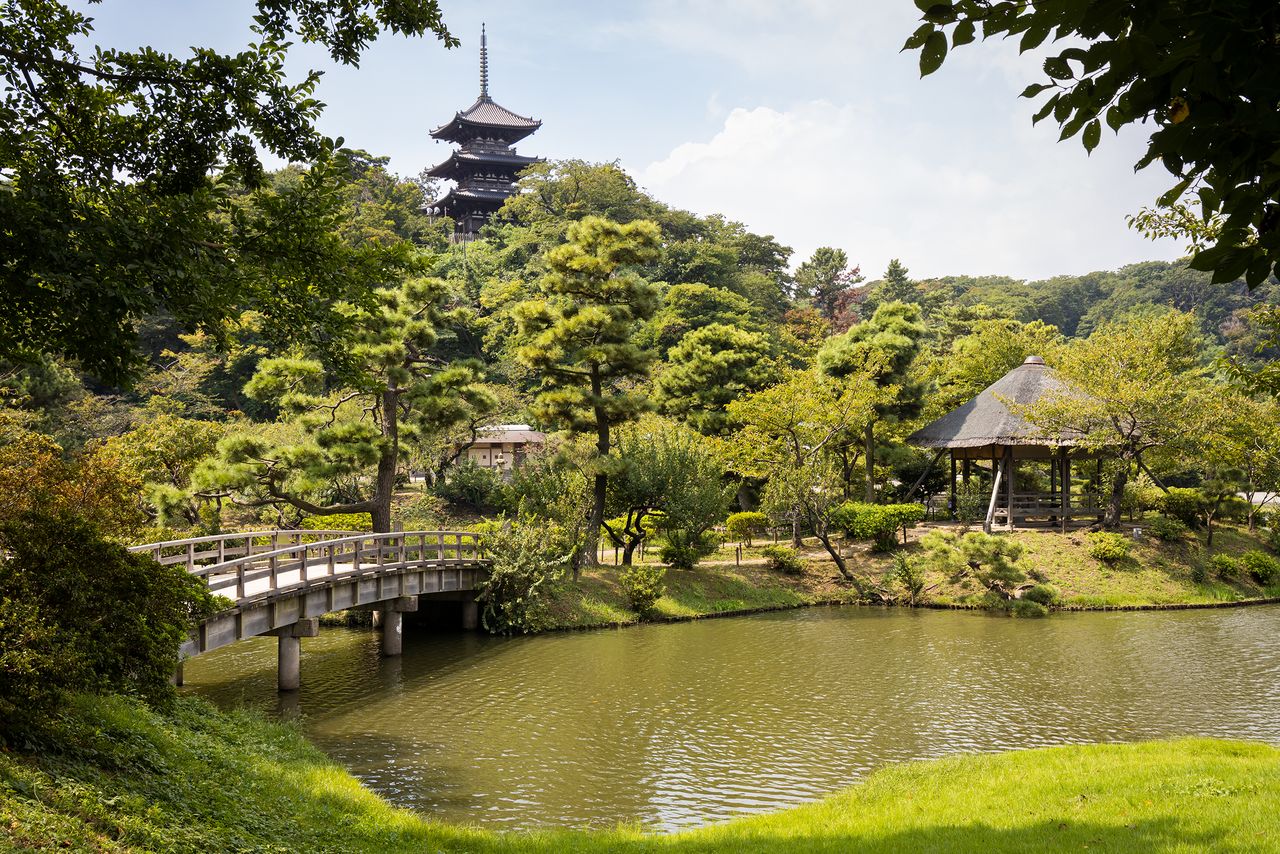 A view across the main pond of the three-story pagoda of now defunct temple Tōmyōji, an important national cultural property, standing atop a hill. Symbol of Sankeien, it is the oldest structure in the garden. 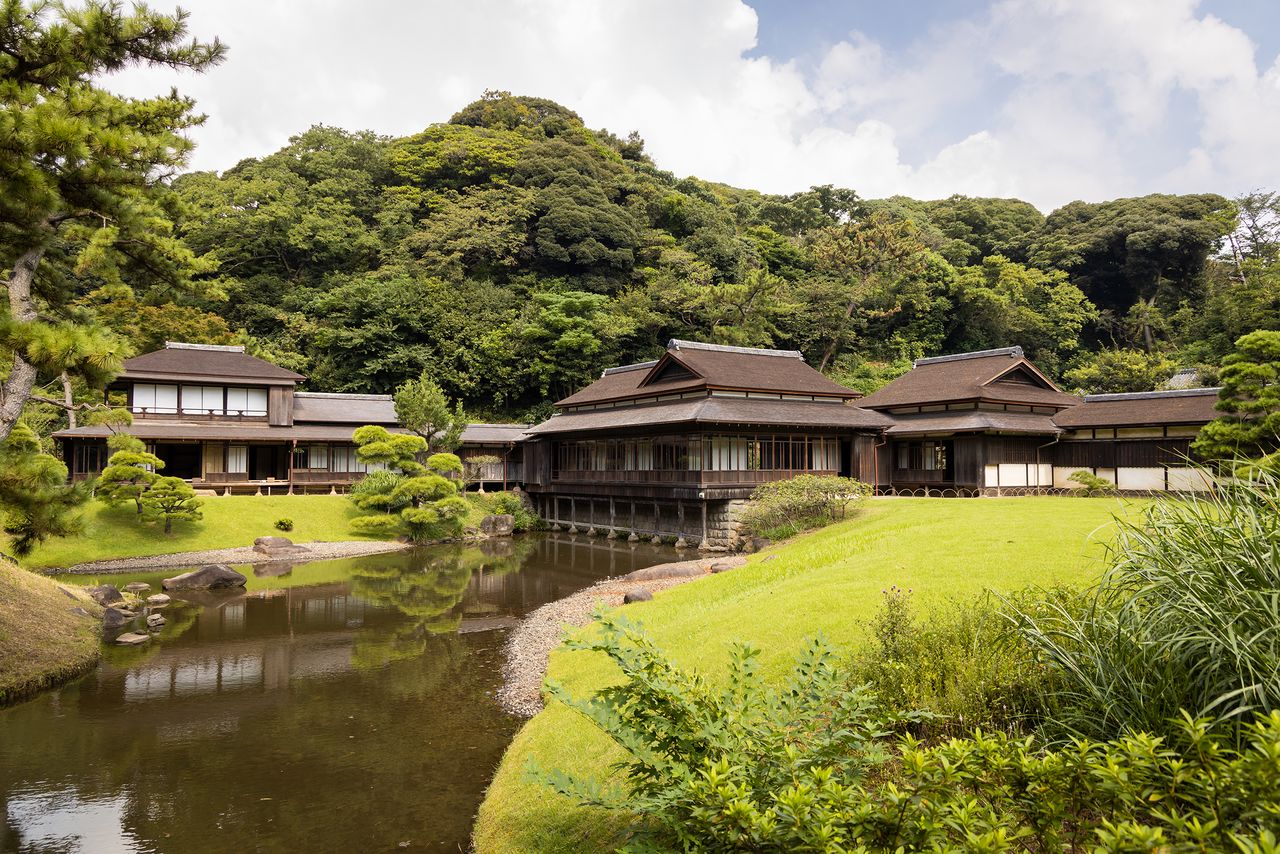 The inner garden, once the private preserve of Sankeien founder Hara Sankei. The portion opened to the public in his lifetime is called the outer garden. Rinshunkaku is the central attraction of the Inner Garden. 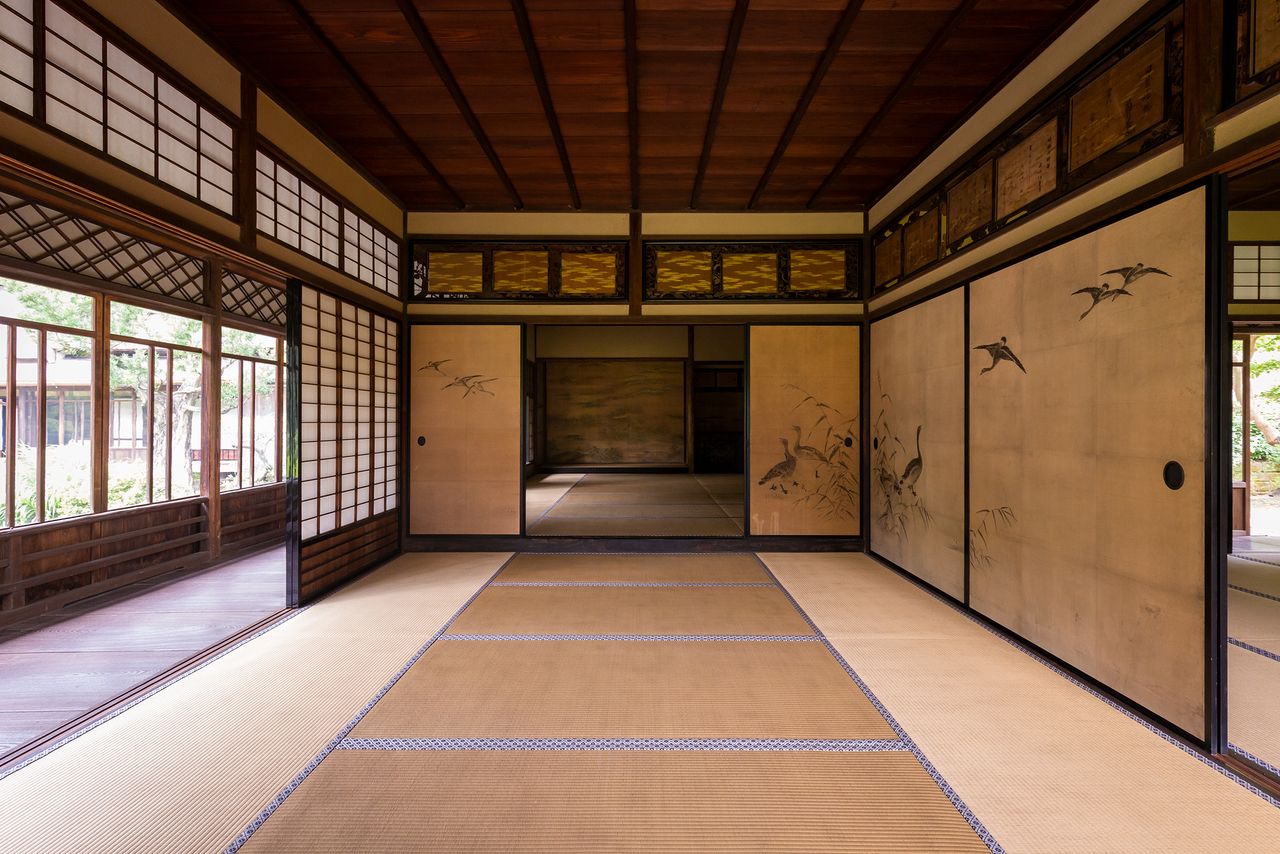 A view of Suminoe no Ma, Rinshunkaku’s principal chamber, seen from the Naniwa no Ma antechamber. The rooms are filled with valuable art, from the paintings on the fusuma to the transom carvings, executed by famed Kanō school artists.

Opened to the Public

Sankei is the sobriquet by which Sankeien founder Hara Tomitarō (1868–1939), a wealthy industrialist and silk trader, is known. Born in Gifu in 1868 as Aoki Tomitarō, he showed great intelligence from a young age and immersed himself in the Chinese classics and other literature and also studied painting. Leaving Gifu for Tokyo, he completed his education at what is now Waseda University and later taught at the Atomi School. There he met his future wife, Hara Yasu, and was adopted into her prosperous merchant family upon their marriage, taking her family name. 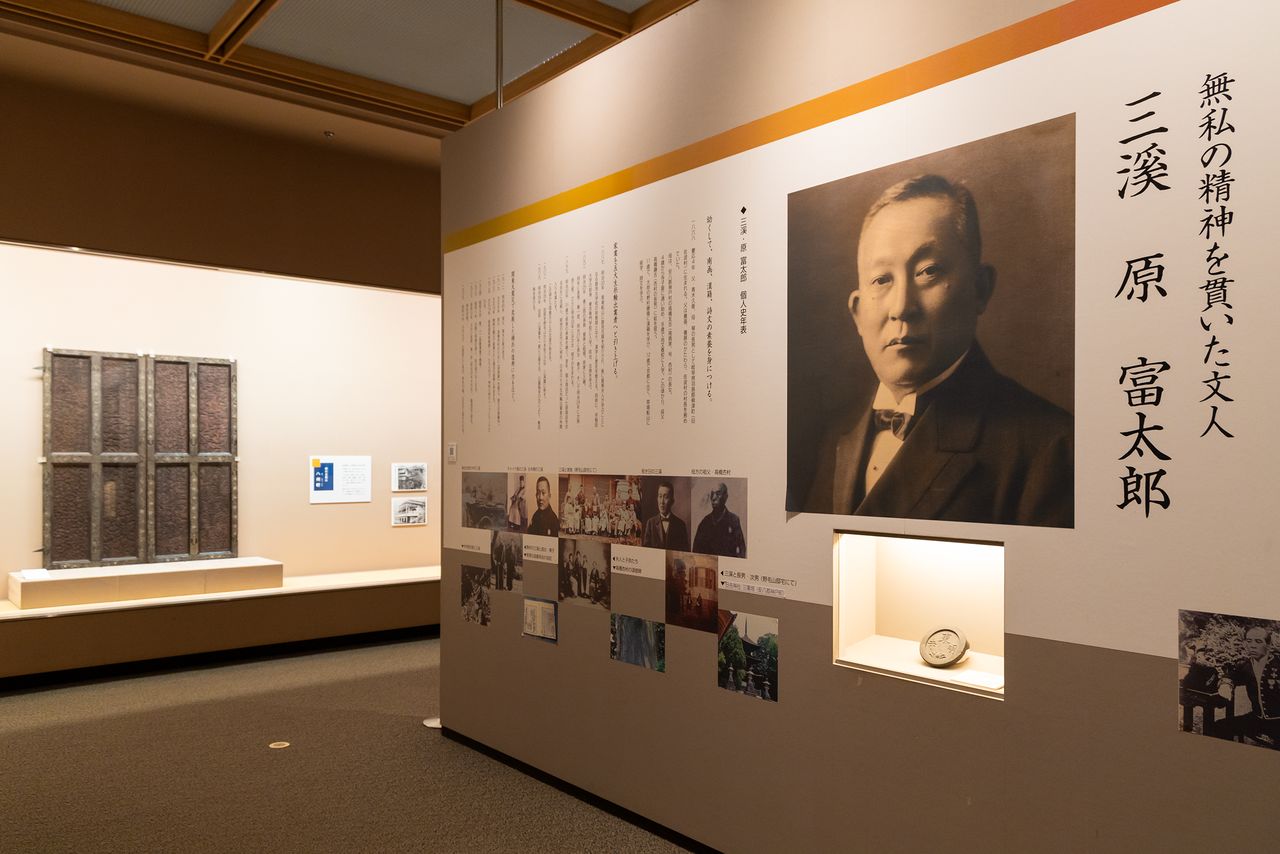 On display at the Sankei Memorial are artworks owned by Hara, documentation about his life, and Kanō school fusuma paintings originally from Rinshunkaku.

Taking over the family enterprise, Hara incorporated the concern, modernized the silk reeling business, and began exporting raw silk, which brought him great riches. He is well known for having at one time owned the Tomioka Silk Mill, a government facility in Gunma Prefecture that began operating as Japan’s first large-scale, Western-style silk-reeling factory in 1872. The Sankeien property had been bought by Hara’s adoptive grandfather, Hara Zenzaburō, in 1868. Hara built his residence there in 1902 and began acquiring and relocating historic buildings from various parts of the country to Sankeien and creating the garden, naming the estate after a local place name.

A remarkable aspect of Sankeien is that Hara always intended for the garden to be open to the public during his lifetime. It was usually the case that prominent businessmen’s residential estates became parks or gardens after their deaths, but by 1906, just a few years after starting to create Sankeien, Hara opened most of what is today’s outer garden to the public free of charge. Planted with plum and cherry trees and offering seasonal flowers in bloom, it became a popular leisure spot for locals. Hara continued to expand the garden and acquire more structures for the site until it was finally completed in 1922. 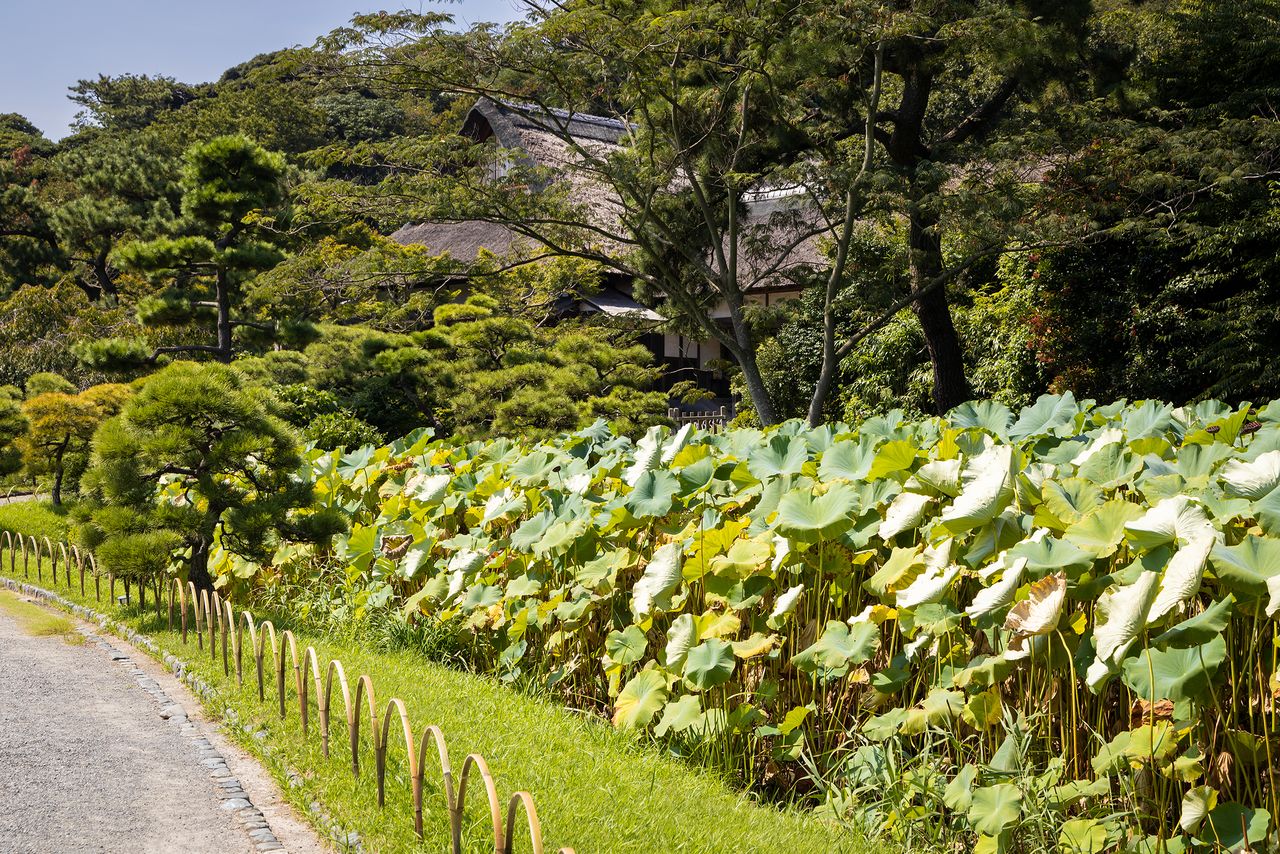 Beyond the outer garden’s lotus pond stands Kakushōkaku, formerly the Hara family’s private residence. The current building, designated a cultural asset of Yokohama, is a reconstruction of the original structure. 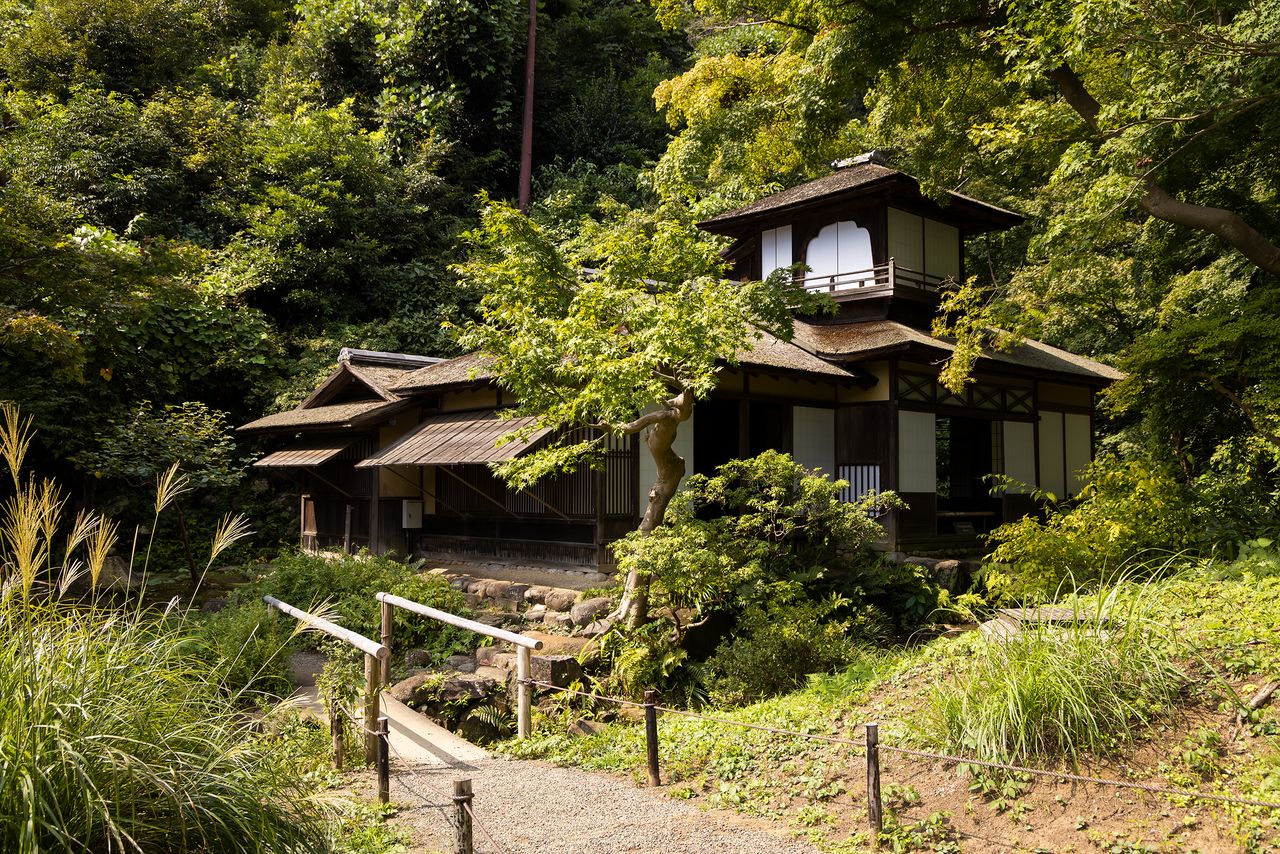 The last structure to be relocated to Sankeien, in 1922, was the Chōshūkaku. This was the residence of Kasuga no Tsubone, wet nurse to third Tokugawa shōgun Iemitsu, and originally stood on the grounds of Kyoto’s Nijō Castle. Constructed in the rōkaku architectural style originating in China, it features two-story, square construction and is designated an important national cultural property.

On a hill that is part of the Outer Garden stands a three-story pagoda that is said to have been erected in 1457 at Tōmyōji, a now-defunct temple in Kyoto. The oldest structure in the garden and an iconic presence, it was relocated to Sankeien in 1914 to enhance the view from Hara’s private garden.

Rinshunkaku, formerly the Iwade Goten villa of the Kii branch of the Tokugawa family, was modified to harmonize with the Sankeien garden. The roof shapes and placement of its pavilions were altered and the rooms laid out to take maximum advantage of the exquisite views of the pagoda and a covered bridge. 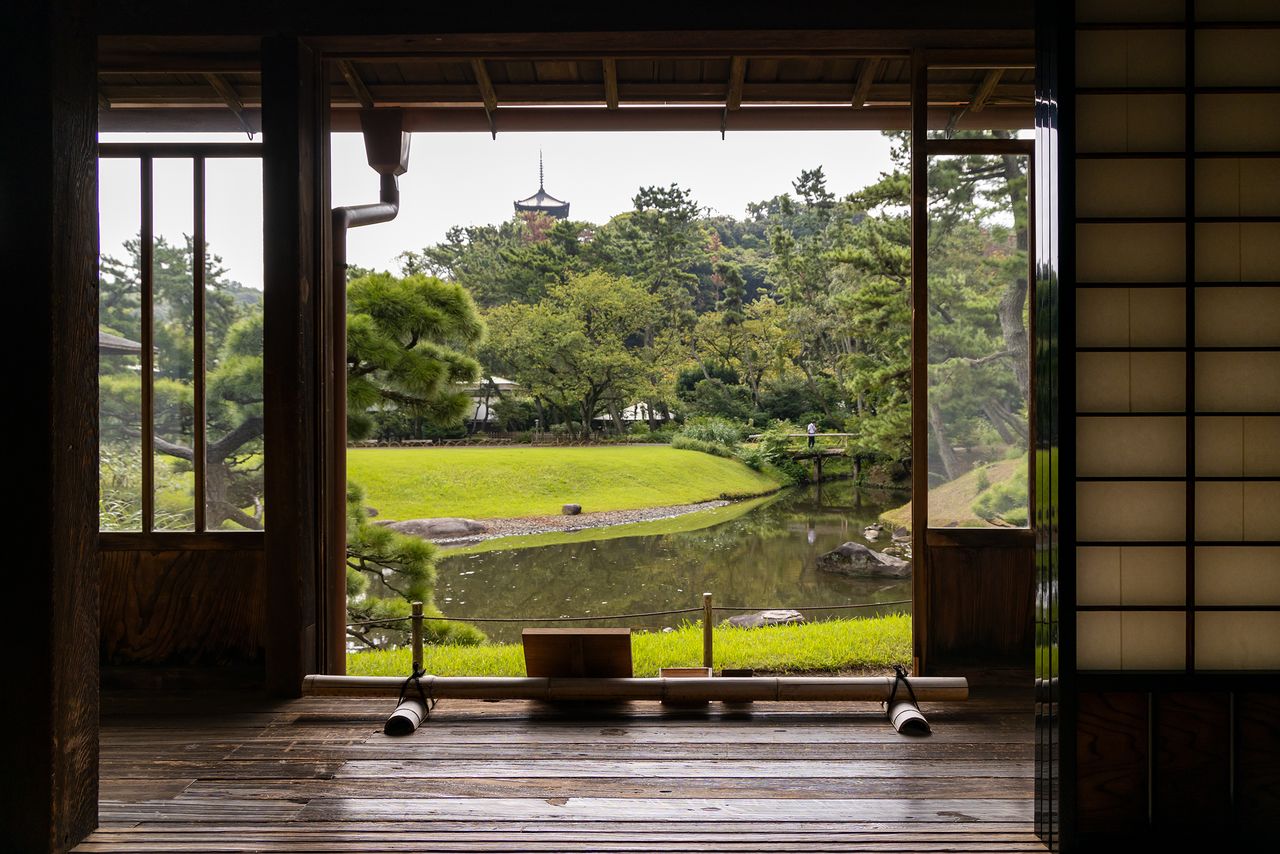 The view from a room in Rinshunkaku’s third pavilion. The pagoda in the distance blends harmoniously with the pond and the greenery. 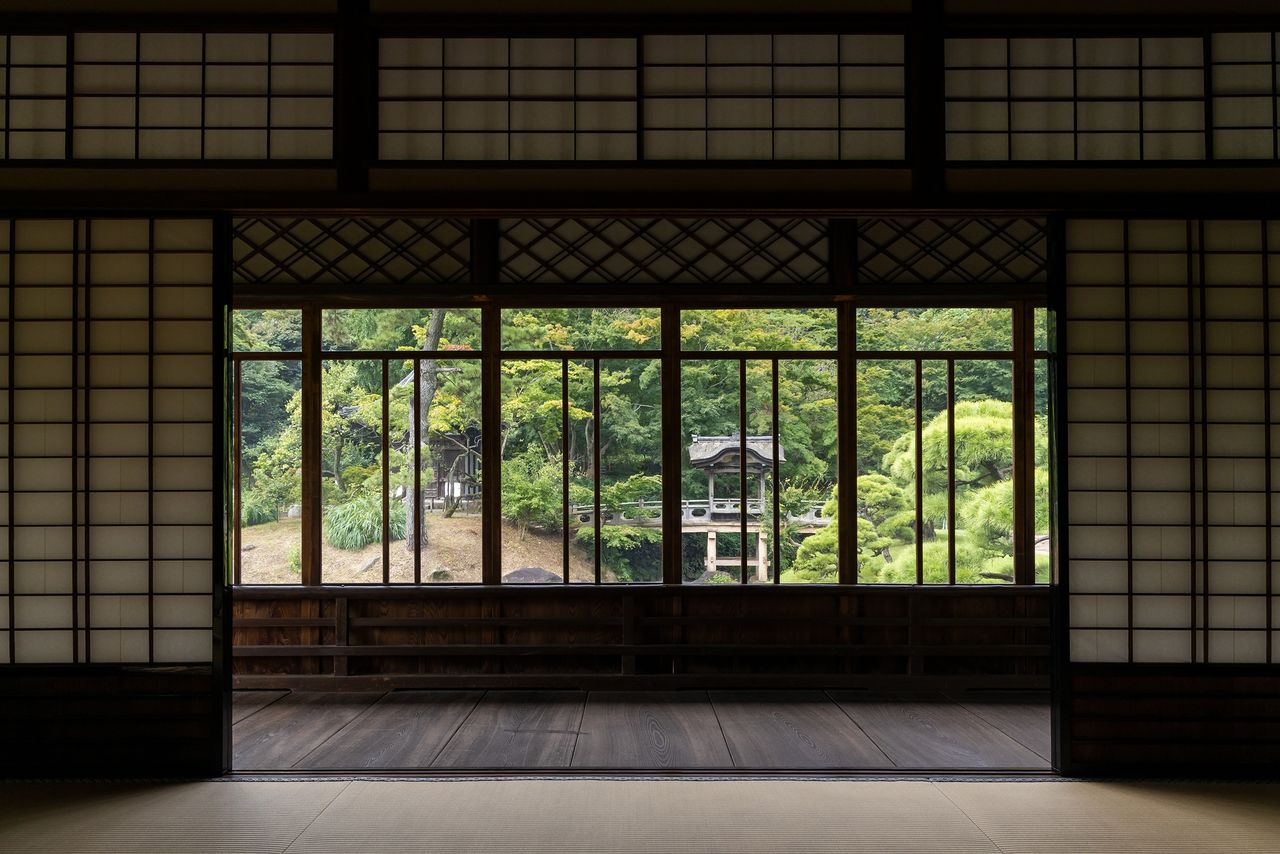 A covered span modeled after the Kangetsudai bridge at Kyoto temple Kōdaiji. The Jutō Ōidō Hall can be seen from the Naniwa no Ma. 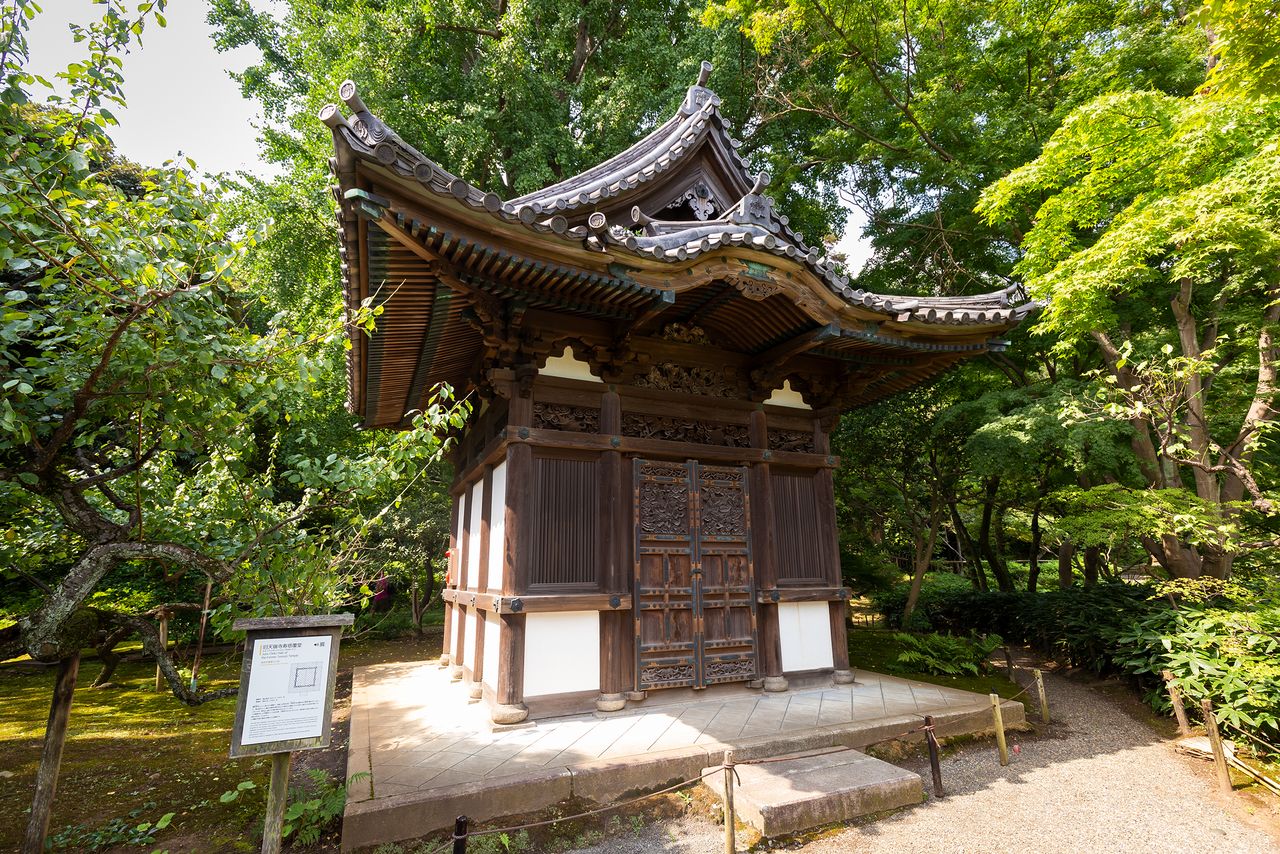 The Jutō Ōidō Hall of defunct temple Tenzuiji is an important national cultural property standing southeast of the covered bridge. Toyotomi Hideyoshi had it erected at Kyoto’s Daitokuji temple in 1597.

Kakushōkaku, Hara’s private residence and the first building erected at Sankeien, was not only the family home but also a venue where Hara displayed his numerous artworks and held a salon for the avant-garde artists of the time. Famed nihonga artists Yokoyama Taikan (1868–1958) and Maeda Seison (1885–1977) created sensational works—Ryūin (In the Shade of Willows) by Yokoyama and Mikoshiburi (Mikoshi Procession) by Maeda—while in residence there. It was also from Sankeien that moral philosopher Watsuji Tetsurō (1889–1960) set forth on the journey that produced his memoir Koji Junrei (Pilgrimages to the Ancient Temples).

Shōfūkaku, a building above the garden near the pagoda, is where Rabindranath Tagore (1861–1941), the Indian poet, writer, and social reformer and the first Asian recipient of the Nobel Prize in Literature, spent two and a half months in 1916 and where he composed his book of poems Stray Birds. Thanks to the garden he created and his keen insights, Hara provided a site for the public’s relaxation and also stimulated the creative appetite of the many artists he associated with. 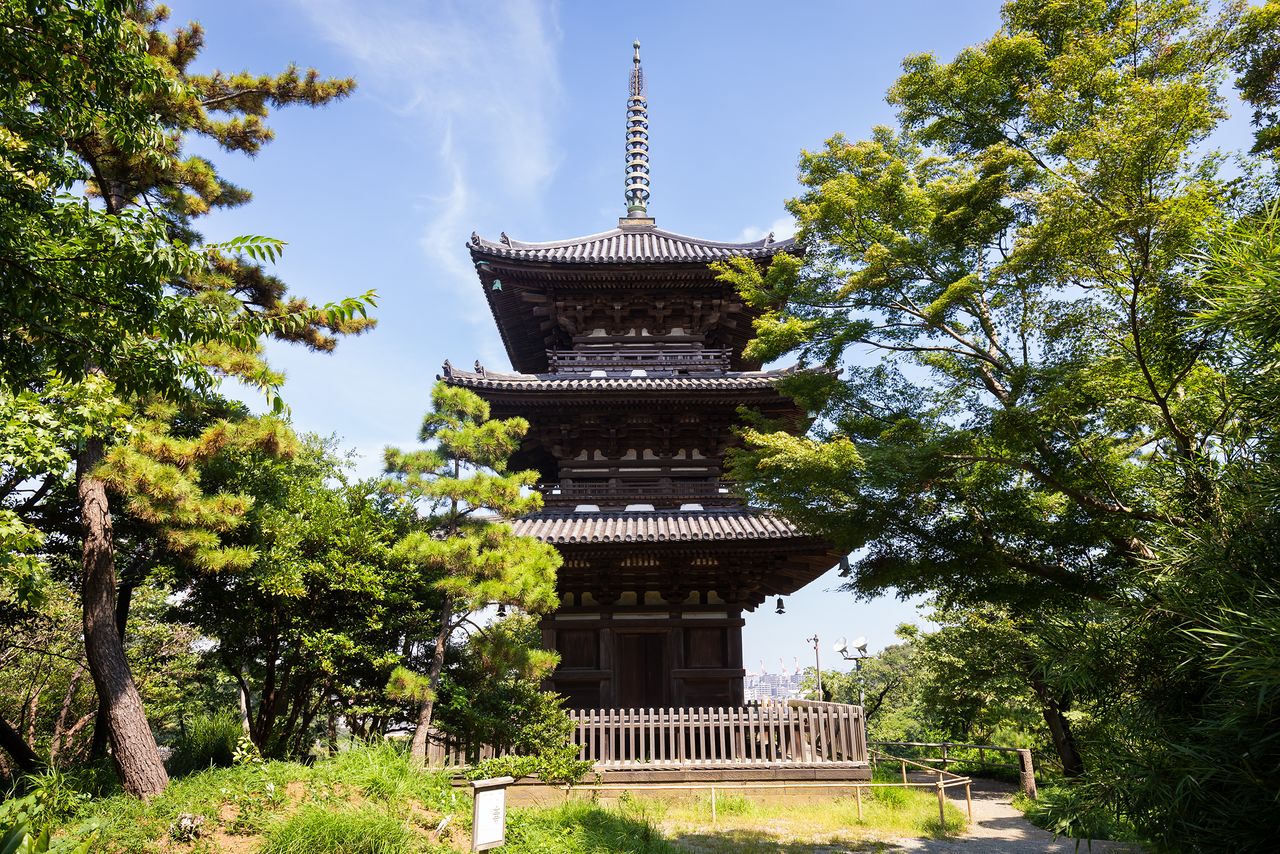 A climb up the hill offers a good view of the Tōmyōji pagoda. 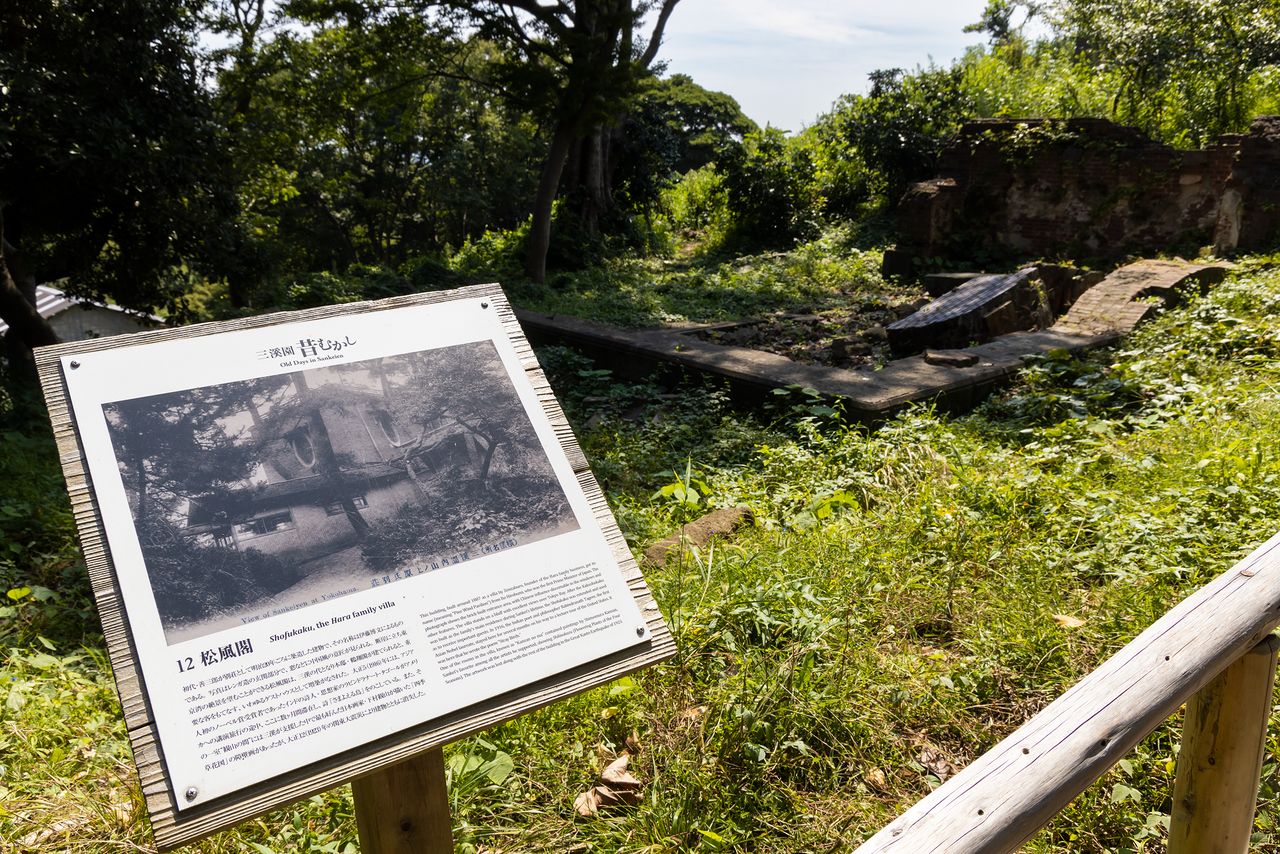 Near the pagoda, a plaque is all that remains of Shōfūkaku, destroyed in the 1923 Great Kantō Earthquake.

One year after Sankeien’s completion, the Great Kantō Earthquake struck, nearly destroying Yokohama. Many of the buildings in the garden collapsed. Hara used his wealth to help reconstruct the city. He passed away at Sankeien’s Hakuuntei in 1939.

The garden was also badly damaged during World War II. It was eventually donated to Yokohama in 1953 and its outer garden opened to the public the following year. After five years of restoration work, the inner garden reopened in 1958. Various amenities, including the Sankeien Kinenkan memorial hall and walking paths, were added over the years, and the garden was designated a place of scenic beauty by the national government in 2007. 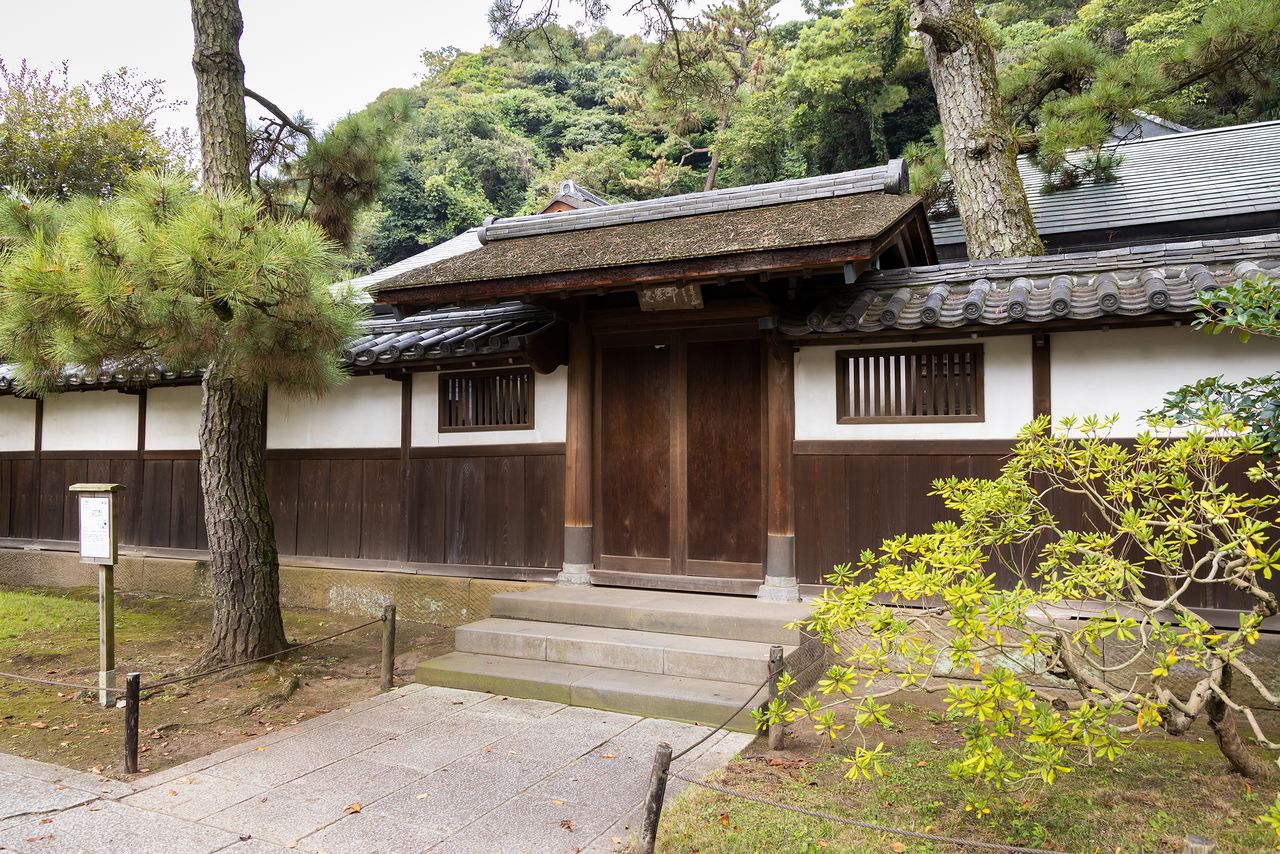 Hakuuntei, the residence where Hara passed away. The structure is a tangible cultural property of the city of Yokohama. 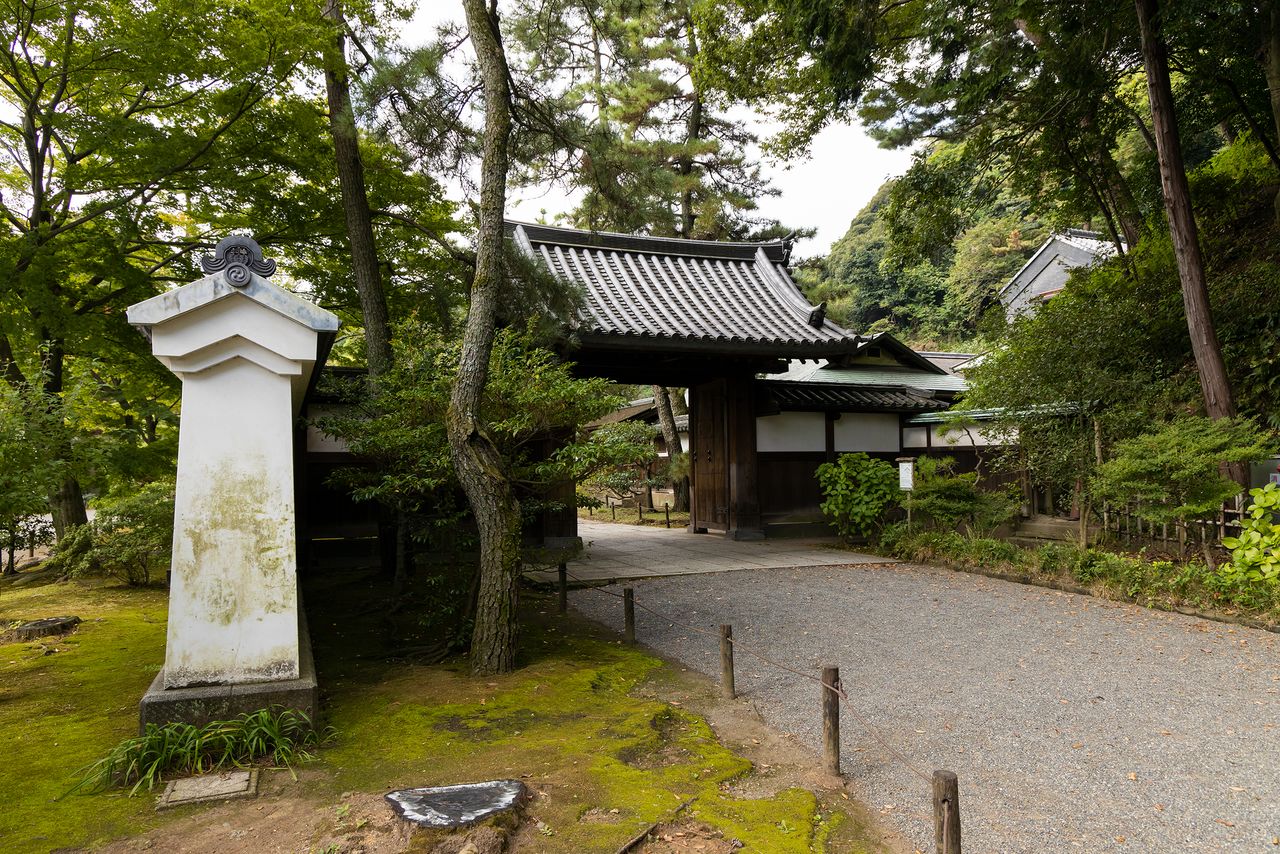 The Gomon Gate to the Inner Garden, a tangible cultural property of the city of Yokohama, was moved here from Kyoto’s Saihōji in the eighteenth century.

Sankeien’s vast expanse is dotted with tea houses where visitors can relax and enjoy a light meal. Sankeien Saryō serves a popular tempura and soba set, and Taishunken is known for its Sankei noodles. Volunteer tour guides well versed in the garden’s history and notable sights offer tours for those who wish to know more about the garden.

According to the guides, many visitors say that Sankeien’s plain yet refined beauty is restful and refreshing, and some are pleasantly surprised at the lack of ostentatiousness that might be expected from the garden of a fabulously rich man. Today, the surroundings continue to reflect Hara’s deep affinity for art and his desire to widely share its appeal with the public. 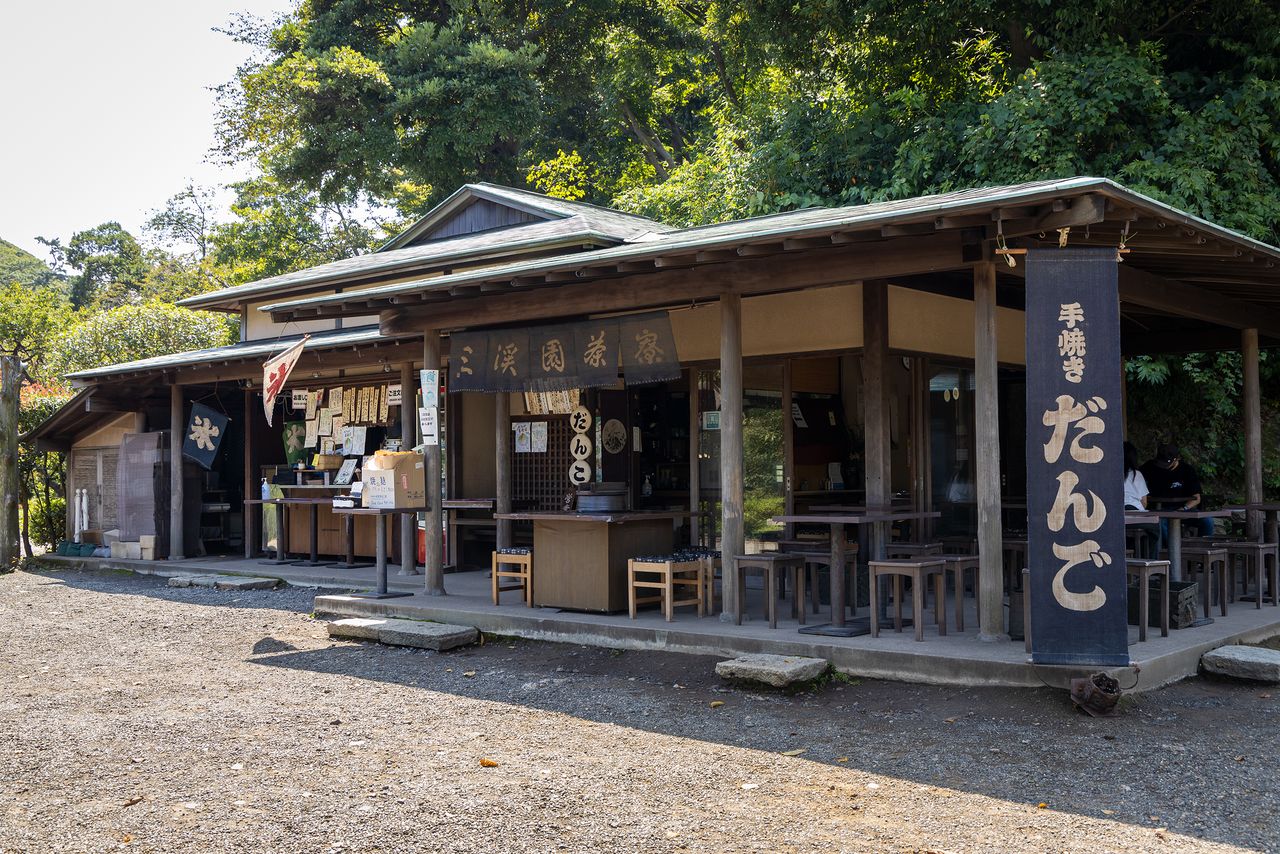 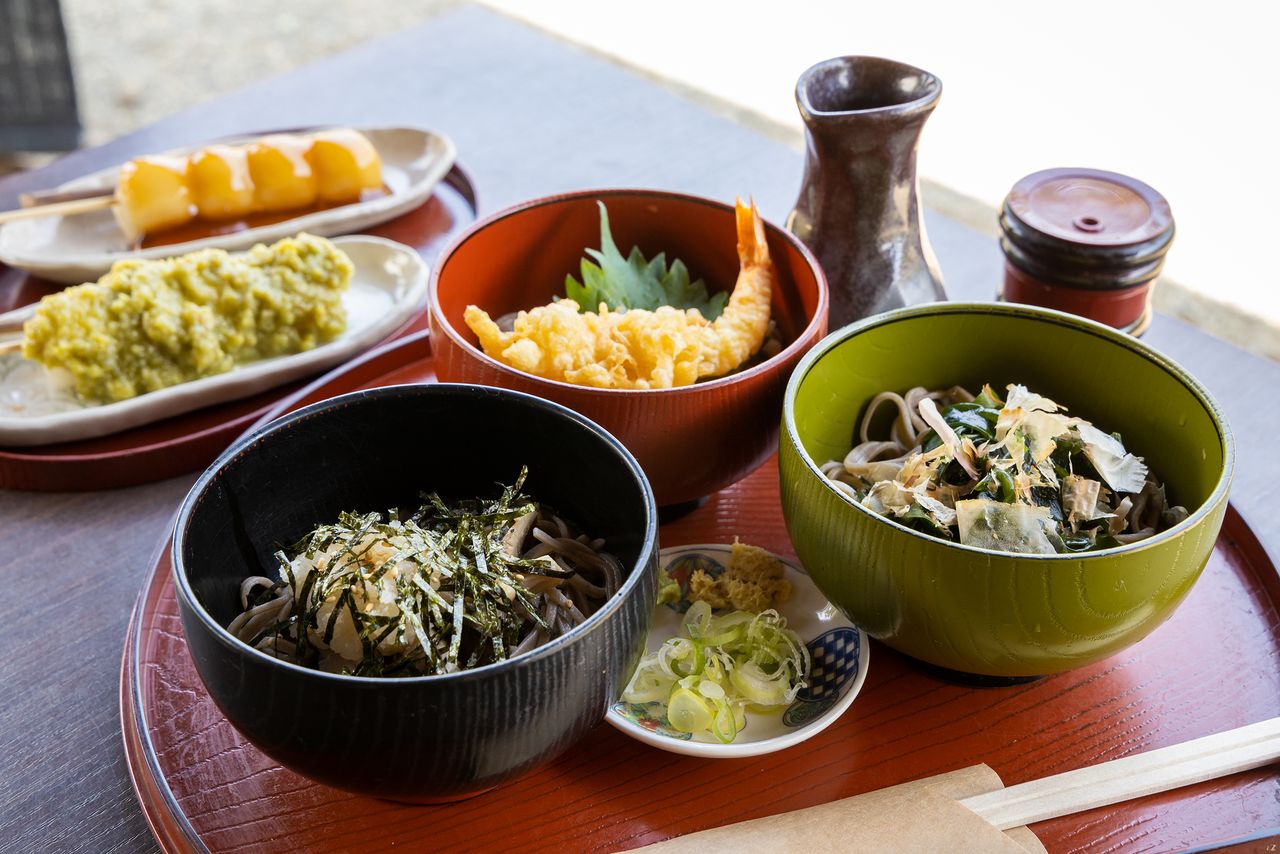 The “Sankeiwan” set, a bowl of soba, prawn tempura, and grated daikon topped with wakame, will set a diner back ¥1,200, while the hand-grilled dango start from ¥150. 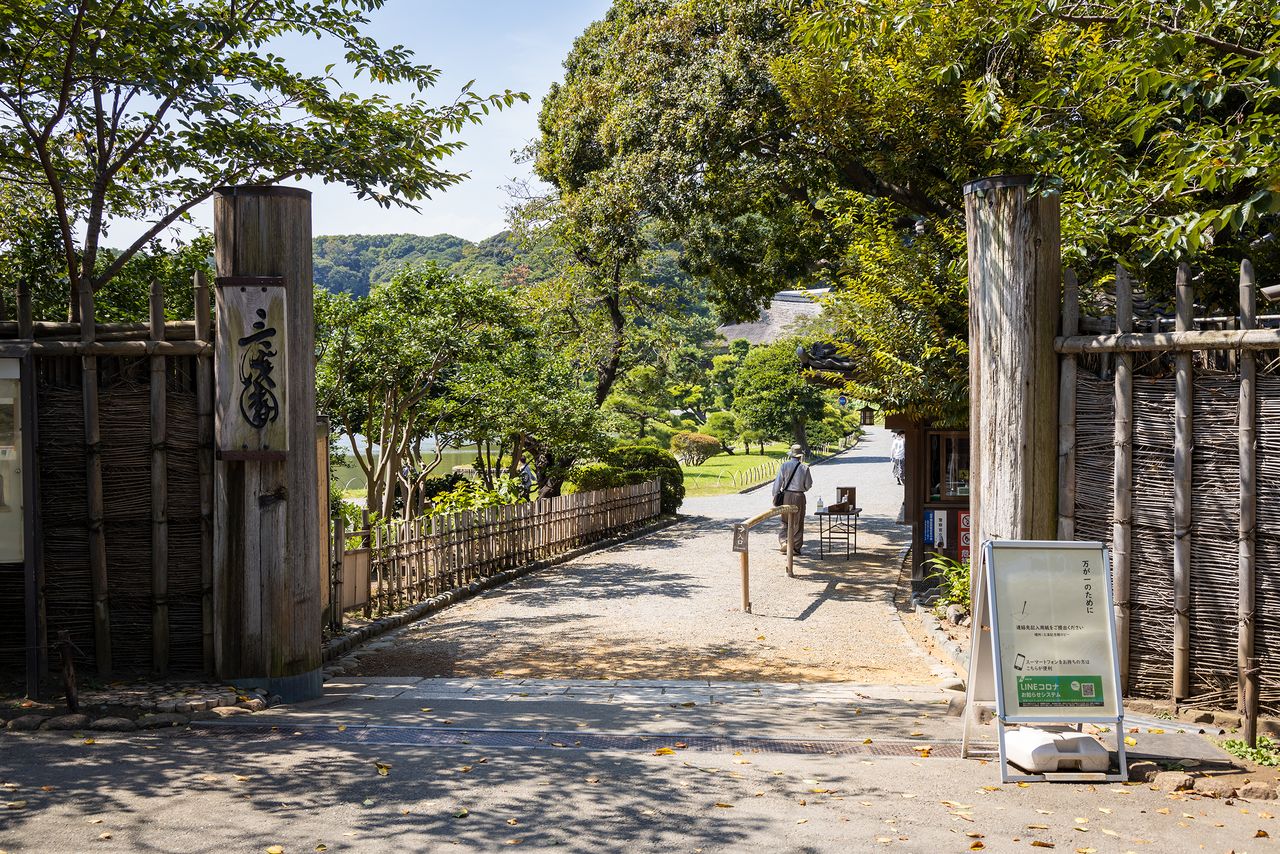