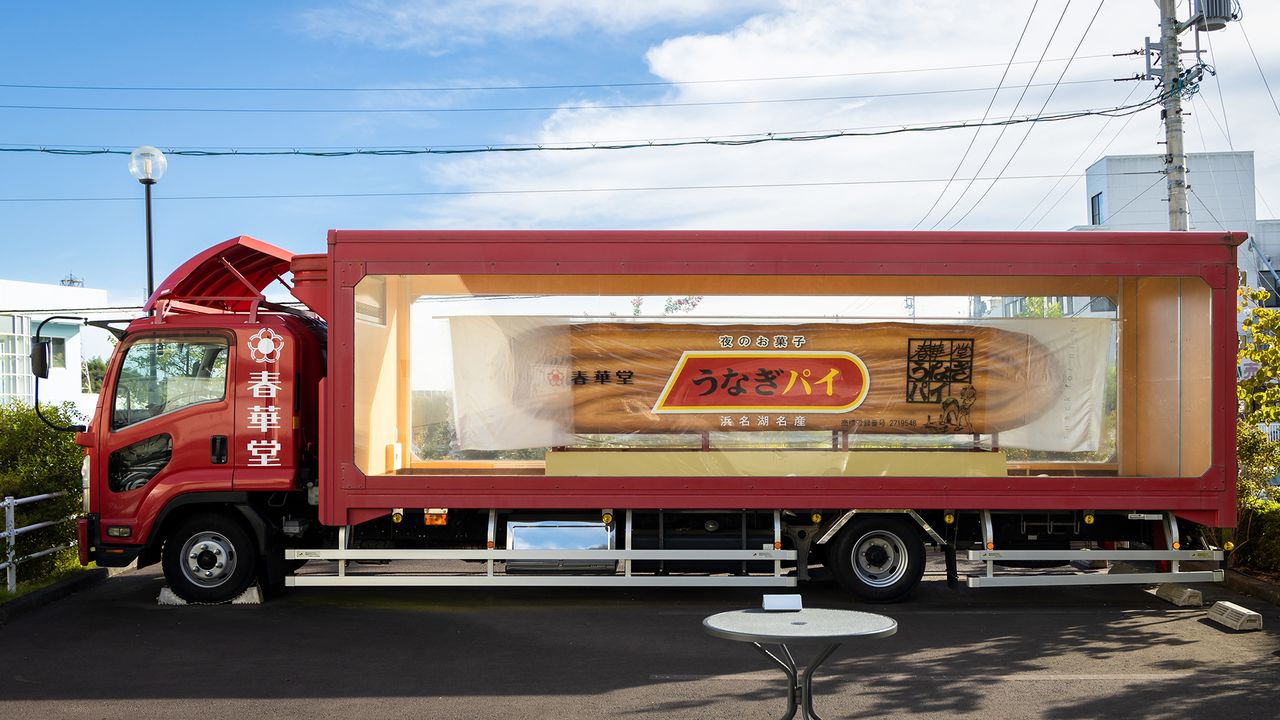 Travel Food and Drink Nov 4, 2022
Unagipie is the signature sweet of Hamamatsu in Shizuoka Prefecture and takes its name from the area’s association with eels, which are farmed in the waters of nearby Lake Hamana. The flaky pastry is as much famous for containing eel extract as for its suggestive catch phrase. We visited the Unagipie factory to learn more about the popular snack.

Every region in Japan seems to boast its own confectionery specialty, from Hokkaidō’s Shiroi Koibito to Kamakura’s Hato Sablé to Kyoto’s nama-yatsuhashi. Hamamatsu in Shizuoka Prefecture is no exception. Although the city lacks any notable tourist attractions, it has come to be known far and wide for its sweet, crispy Unagipie. 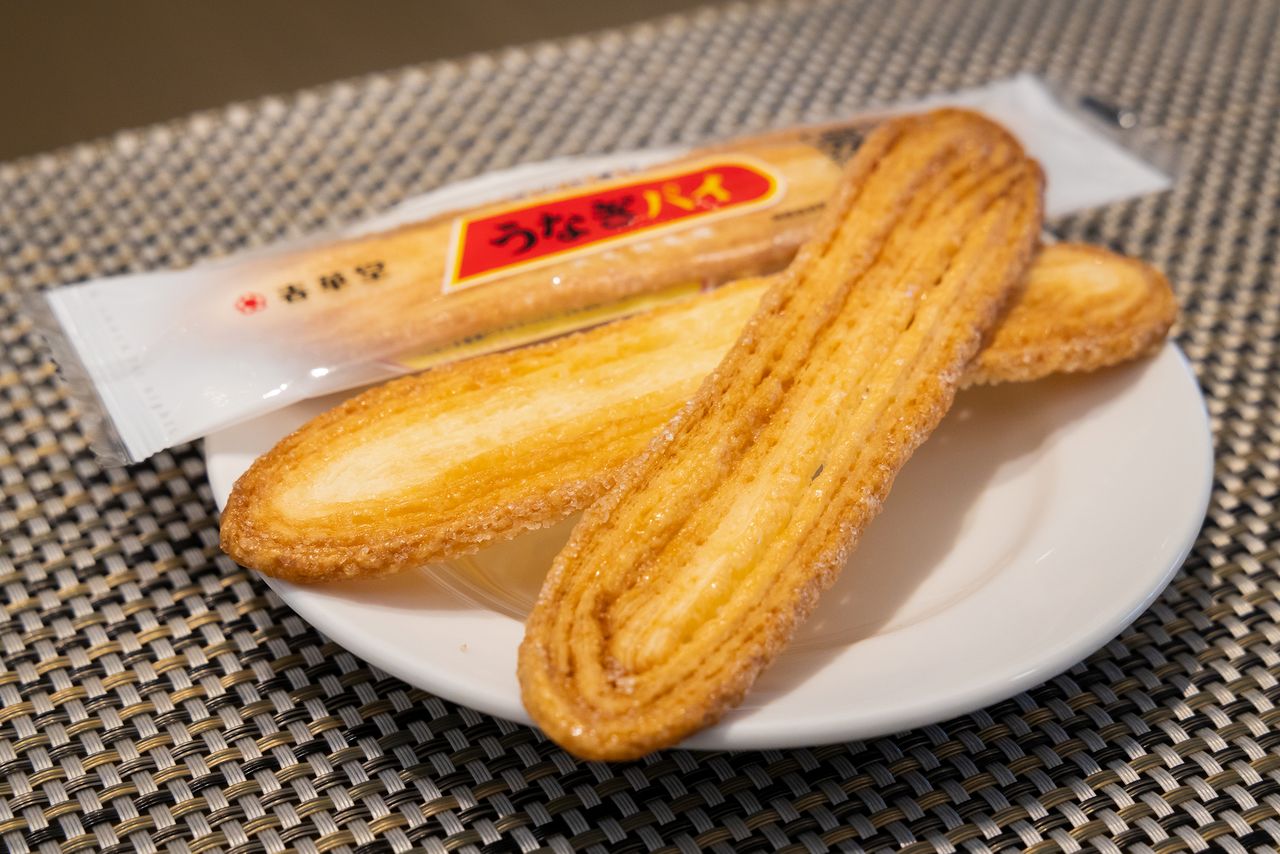 Unagipie is famous in Shizuoka and throughout the Tōkai region.

Unagipie (literally “eel pie”) is unique in that it is the only Japanese confectionery containing actual eel extract. It is also known for its suggestive catch phrase “the ideal evening snack,” which plays on the fish’s reputation for boosting stamina. The sweet’s flaky pastry and flavor have remained the same since hitting the market some six decades ago, during which time it has won fans nationwide from children to adults.

Shunkadō, the company that makes and sells the confectionery, opened its dedicated Unagipie factory in 2005. The facility offers visitors free guided tours where they can view the production process and learn about the snack’s history. There is also a café on the grounds offering a selection of sweets featuring Unagipie. 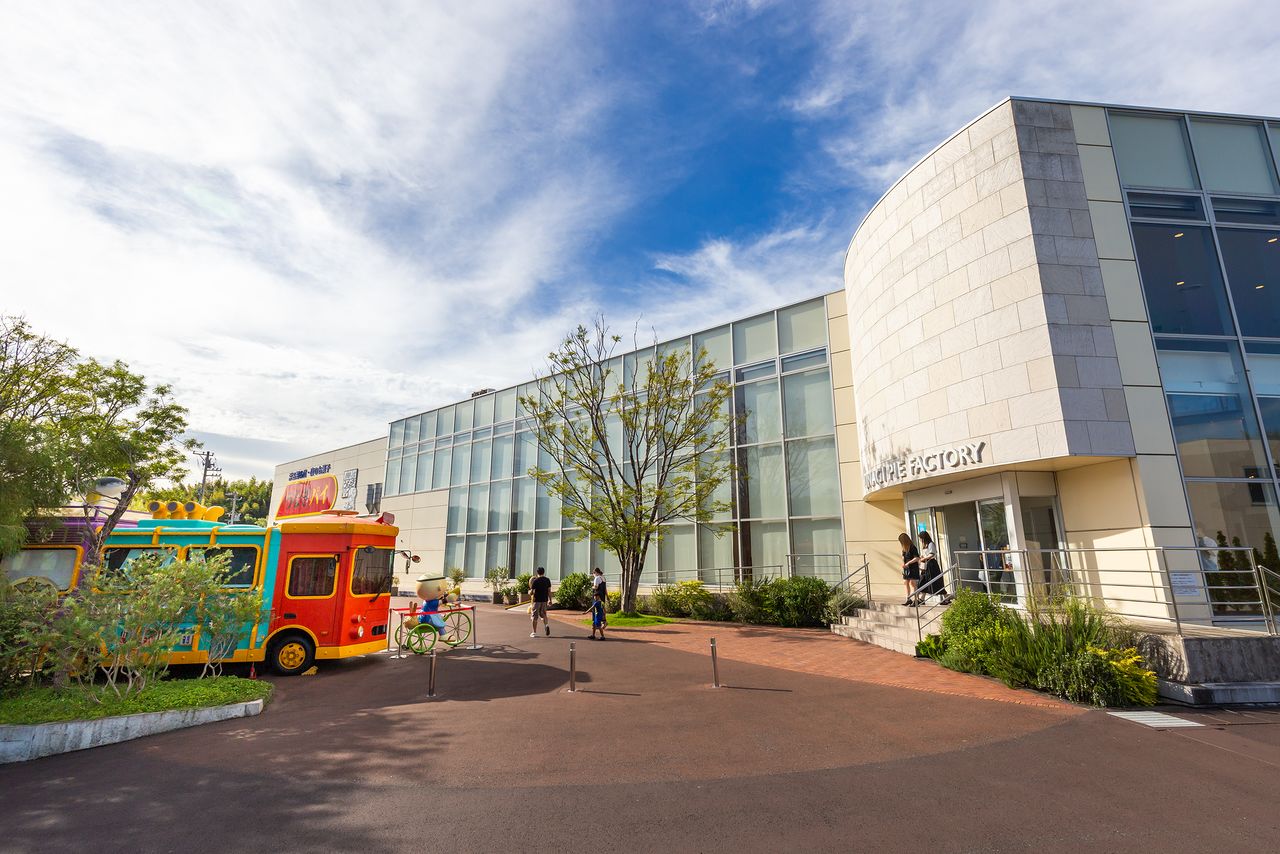 The Unagipie factory attracts visitors on weekdays and weekends alike. 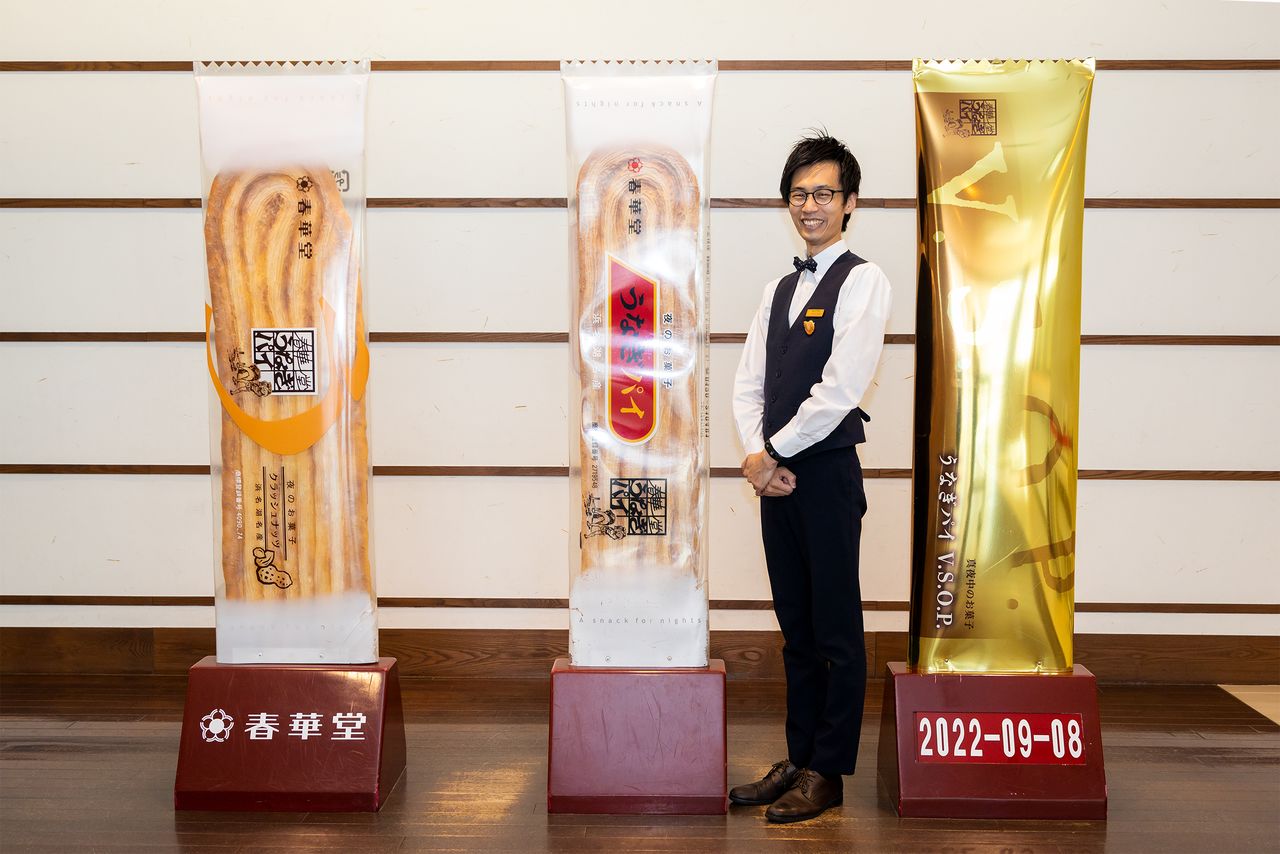 Giving a Boost to Hamamatsu

Shunkadō started out in the late 1880s as a teahouse selling amanattō, a simmered, sweet bean confectionery, in what is today Fujieda. It set up its first shop in Hamamatsu with the opening of the Tōkaidō railroad in 1889. Unagipie is the brainchild of second-generation head Yamazaki Kōichi, who created the pastry in 1961 out of a desire to give Hamamatsu its own distinctive souvenir.

Hamamatsu today is a manufacturing center, home to musical instrument makers like Yamaha, Kawai, and Roland, and the headquarters of Suzuki Motor Corporation. It is also the birthplace of automotive giant Honda Motor. However, it remained something of a backwater, and Hamamatsu residents traveling to other parts of the country were often met with puzzled looks when they gave their hometown. It was only at the mention of nearby Lake Hamana that any glimmer of recognition would arise, prompting the listener to exclaim, “Oh, the place where eels are raised.” Given the town’s poor name recognition, Yamazaki hit on the idea of creating some kind of sweet with a connection to the better-known eels. 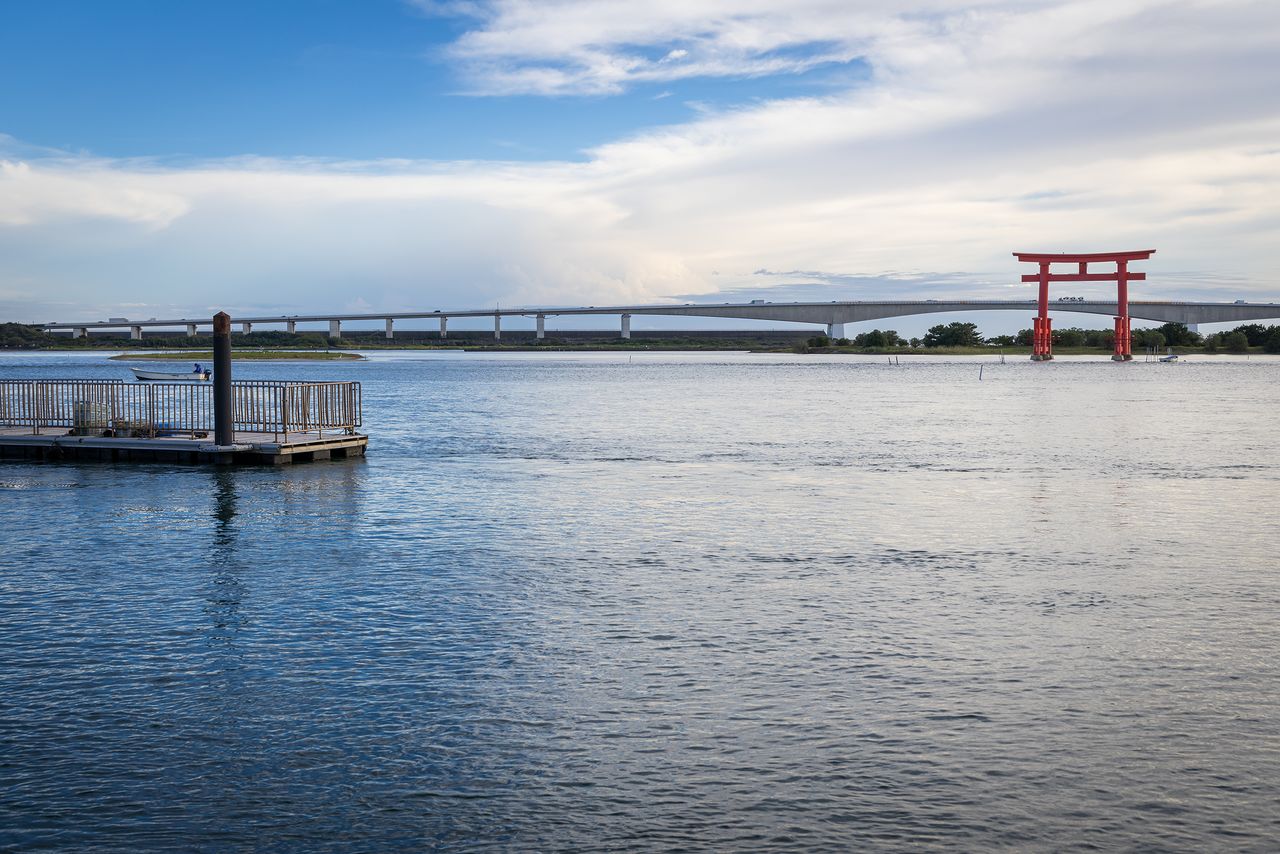 Lake Hamana is a brackish lagoon famous for farmed eel. 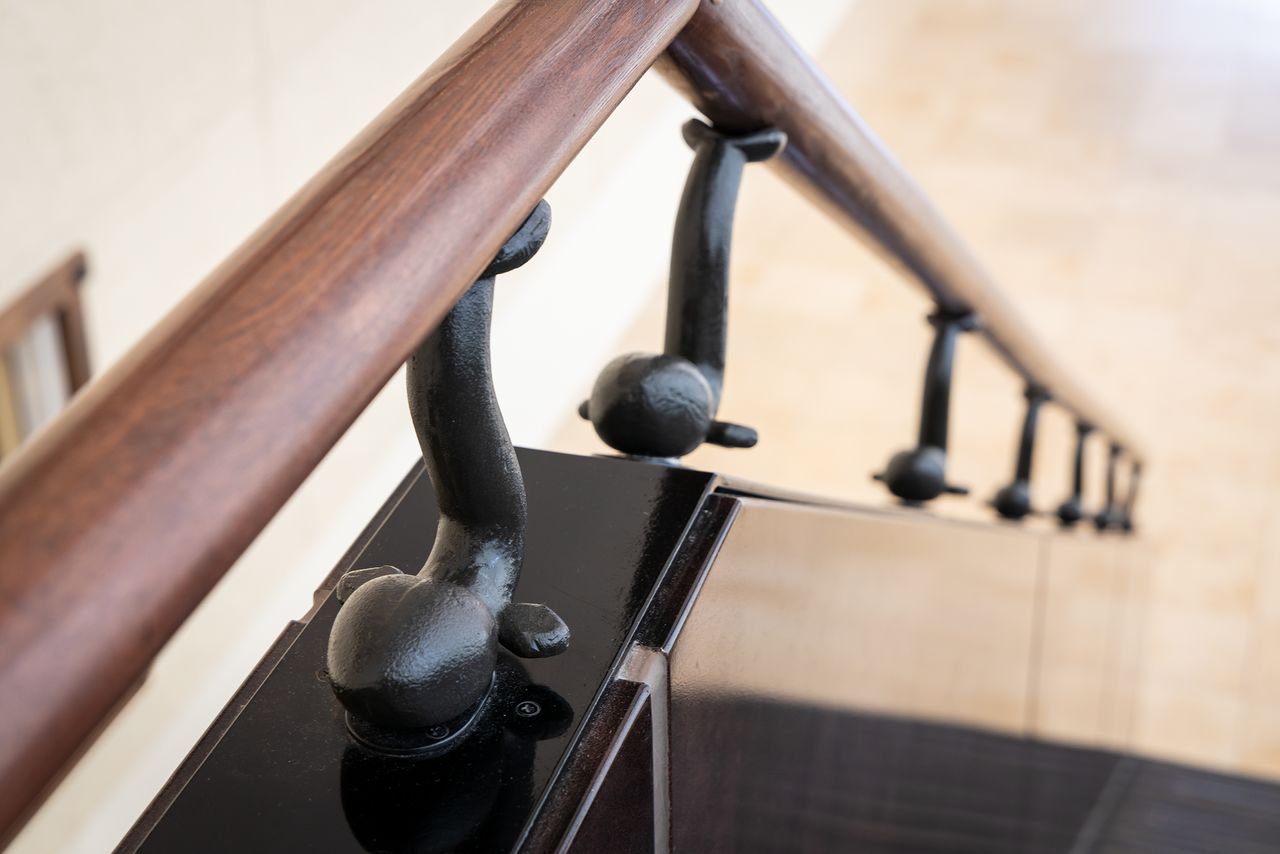 In a playful take on the Japanese phrase unagi nobori, meaning a rapid growth or rise, eels support the banister on the stairs at the Unagipie factory, but only those that are ascending.

Yamazaki took his inspiration for Unagipie from the shape and texture of the French palmier, a flaky pastry resembling a raffia palm frond. After trial and error, Shunkadō succeeded in producing a crispy biscuit with a shape reminiscent of the supple form of an eel, which is what the pastry looks like today. For true authenticity, extract from the heads and bones of eels is kneaded into the batter. 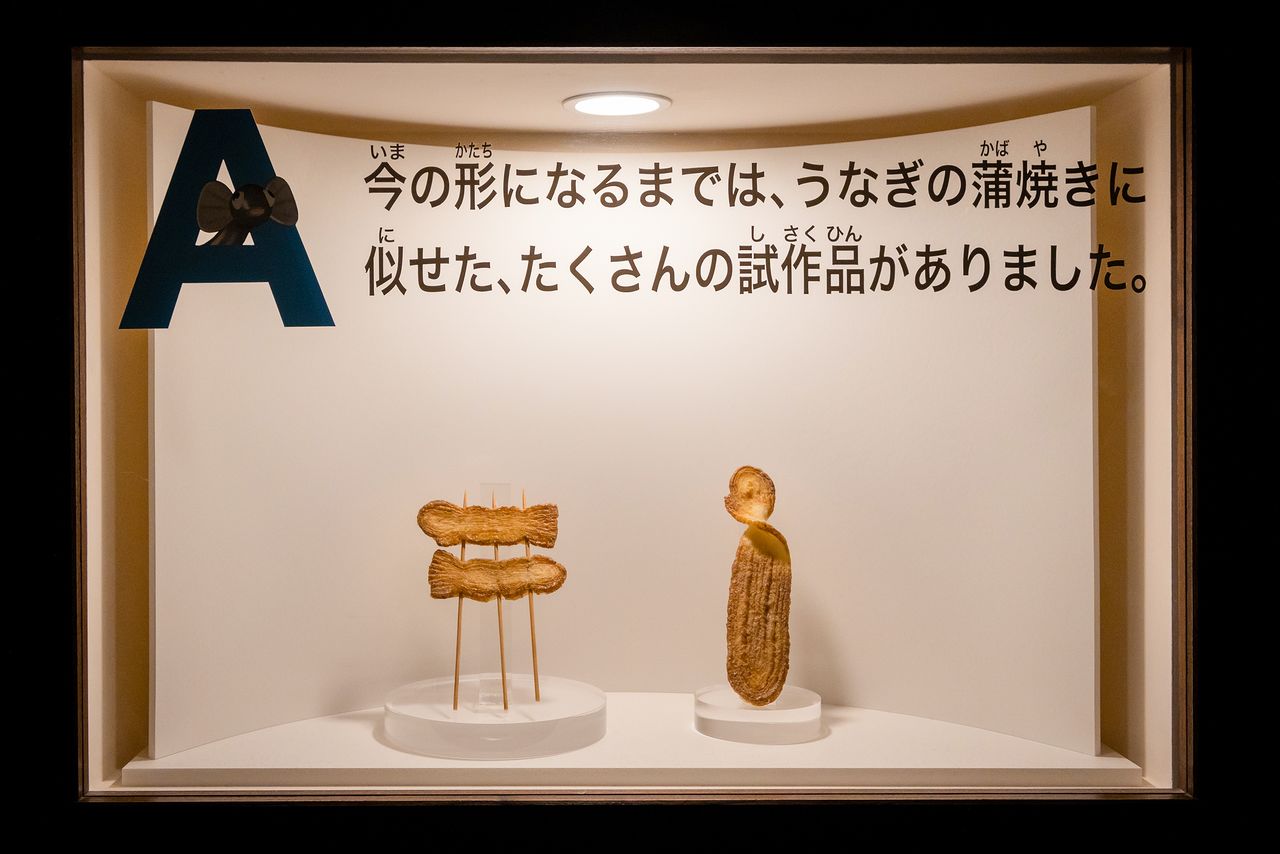 Early Unagipie prototypes include a skewered version, left, and a pastry with a segment mimicking an eel’s head. However, these broke easily and were abandoned as impractical.

Unagipie was launched in 1961 and sold through rail station shops. Propelled by the product’s novelty, sales went well. The opening of Hamamatsu Station on the new Tōkaidō Shinkansen in 1964 and completion of the entire route of the Tōmei Expressway, which passes through Hamamatsu, in 1969, brought travelers and business firms to the city. The influx of new companies drew business travelers, and Unagipie grew in popularity as an omiyage, a customary souvenir for colleagues back at the office.

The snack’s catch phrase “the ideal snack” also contributed to its popularity. With more women working outside the home and fewer opportunities for afternoon snacking with the family, the company hoped that this slogan would encourage consumers to choose Unagipie as an after-dinner treat. 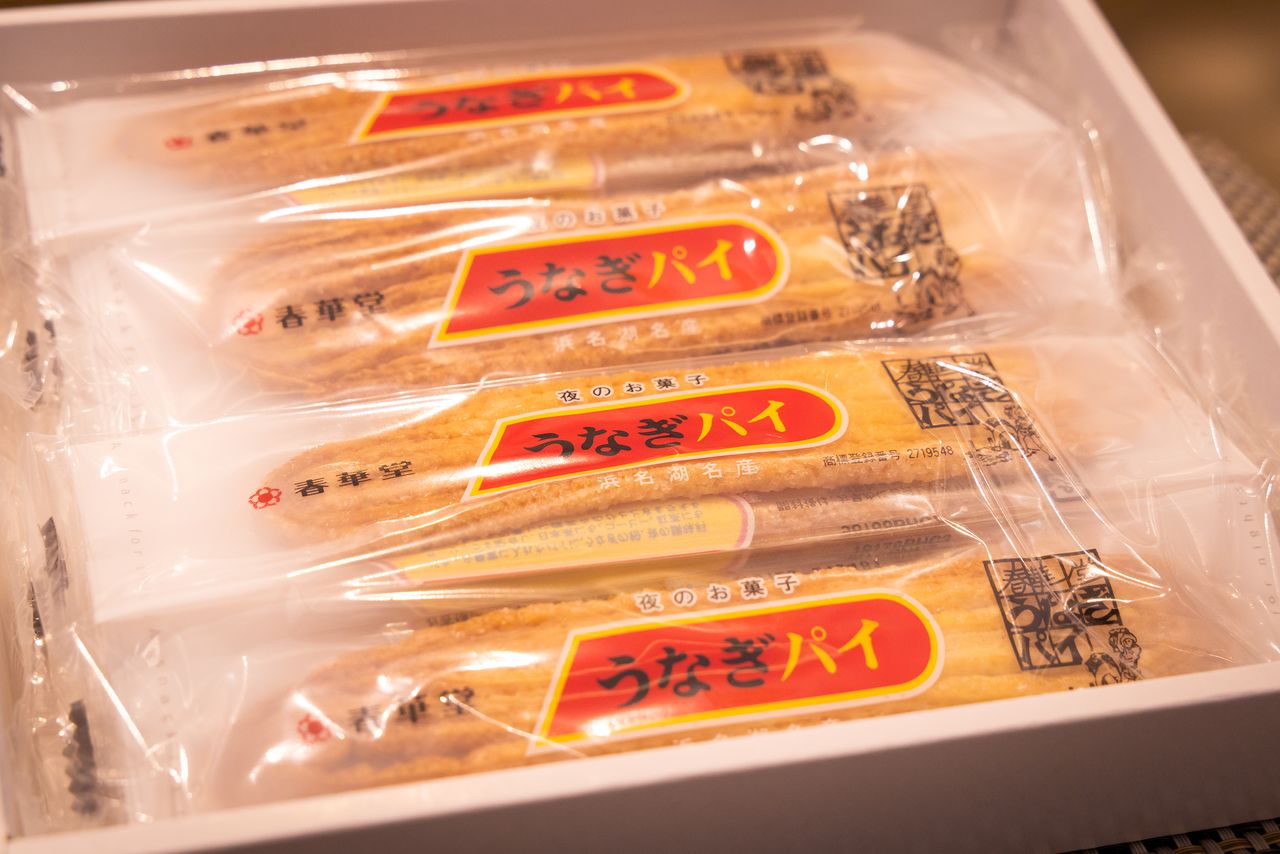 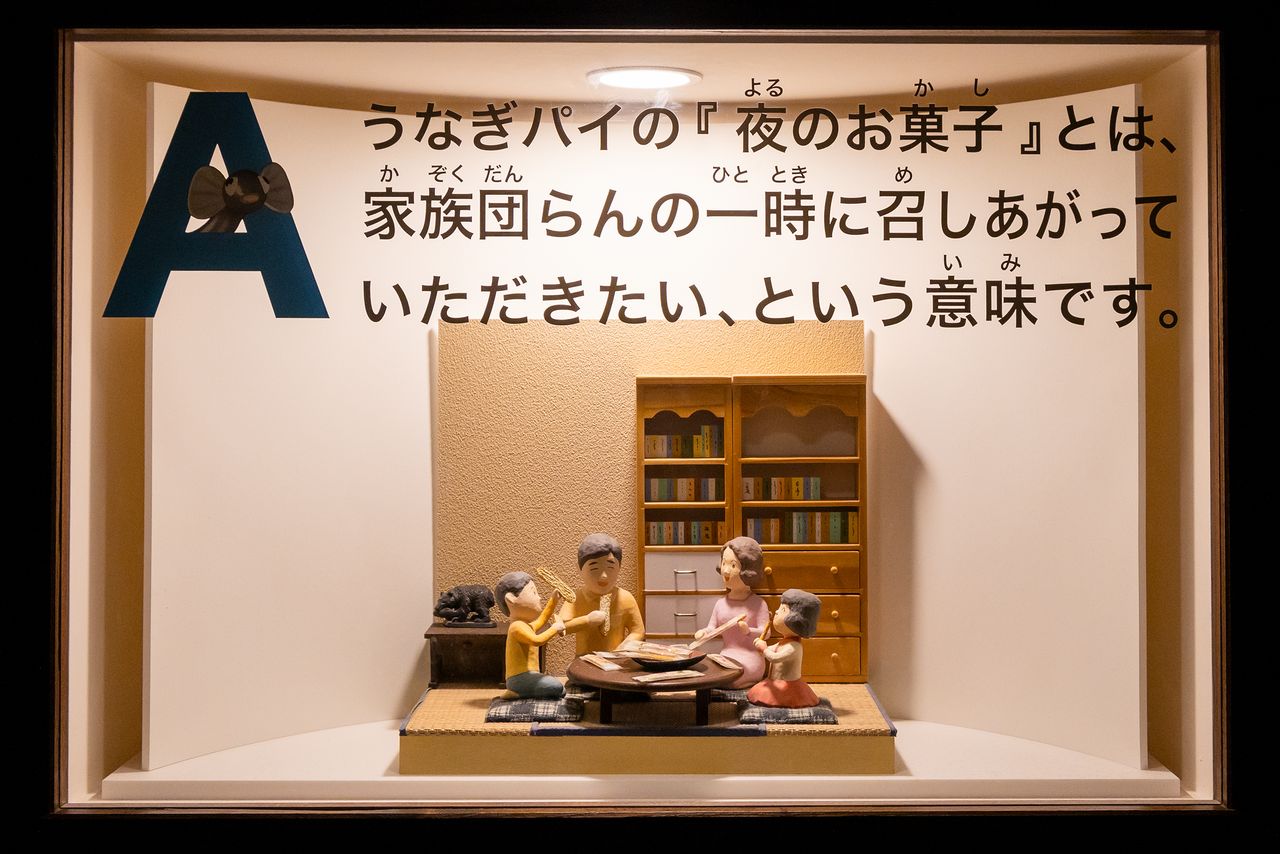 The product’s creator envisioned a family enjoying snacking on Unagipie in the evening.

But to some people, the “evening snack” line had a different connotation. In Japan, eel is reputed to boost the male libido, and as the city grew in stature as a manufacturing center and a lively bar and entertainment district developed, some visitors bought the product as a joke, reading more into the “evening snack” phrase than its original intended meaning.

Shunkadō, quick to take advantage of this unexpected marketing opportunity, revamped its packaging to mimic that of a popular “vitality” drink for men and changed the original blue packaging meant to evoke the waters of Lake Hamana to a showier red, black, and yellow color scheme. This was not false advertising, per se, as the eel extract in Unagipie contains vitamin A, which has restorative properties and helps combat fatigue. Yamazaki, for his part, recognized that his creation needed added value on top of tasty flavor and simply took advantage of consumers’ imaginings. Sales subsequently took off, zooming up in true unagi nobori fashion. 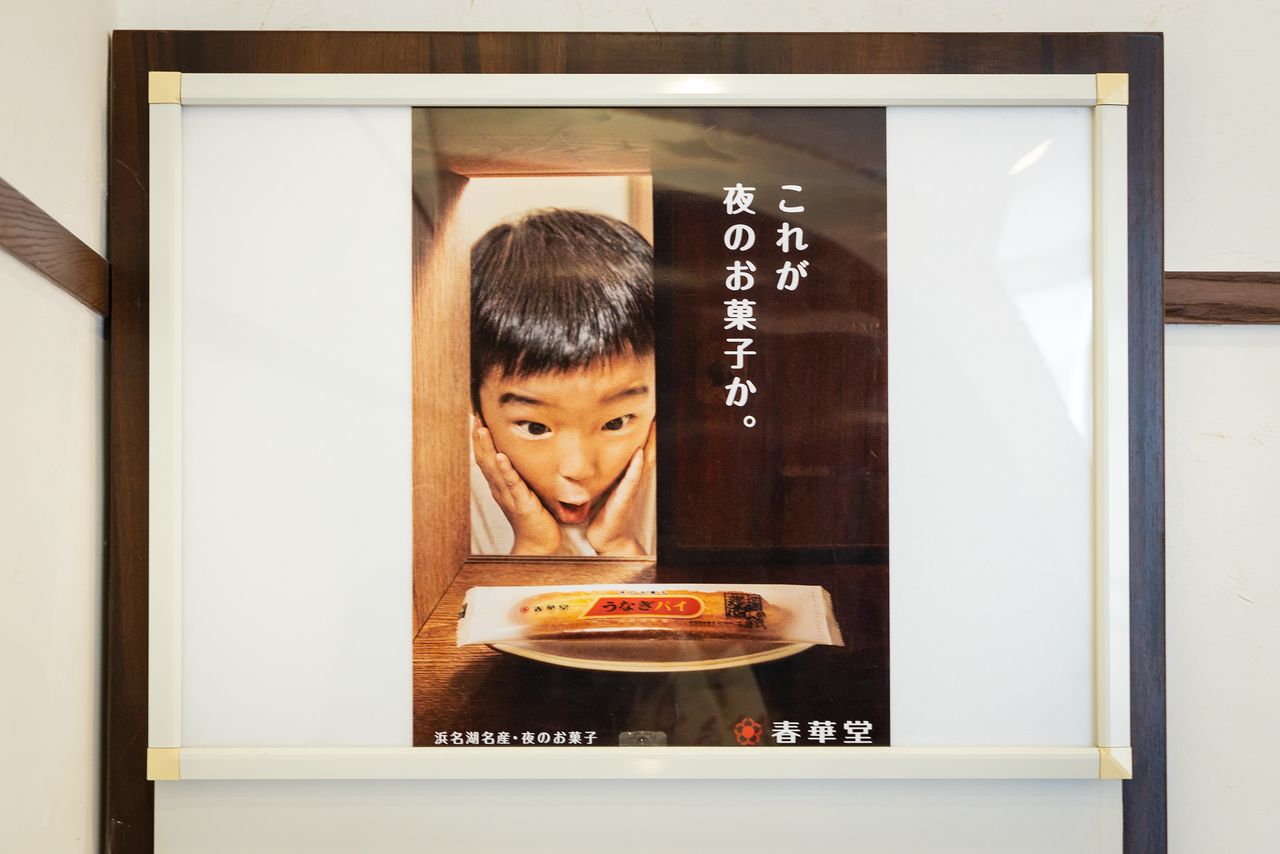 An early poster humorously takes advantage of the racy meaning attributed to the product’s catch copy.

At the Unagipie factory, the production process has remained virtually unchanged from the time the snack was first created. The recipe consists of just flour, butter, water, and eel extract powder, with minute adjustments made for consistency depending on ambient temperature and humidity. Highly-experienced workers are in charge of this process, overseeing production of close to 4 tons of dough per worker per day. The dough is spread thin, sprinkled with sugar, and folded over multiple times to produce a crisp, airy pastry made up of several thousand gossamer-thin layers.

Although baking is automated, the method follows the original process. The pastries are baked at 300℃ for 10 minutes, after which they are brushed with a special sauce, mimicking the method for preparing grilled eel. The sauce recipe is a corporate secret and only five people out of the more than 150 workers at the plant know how to make it. 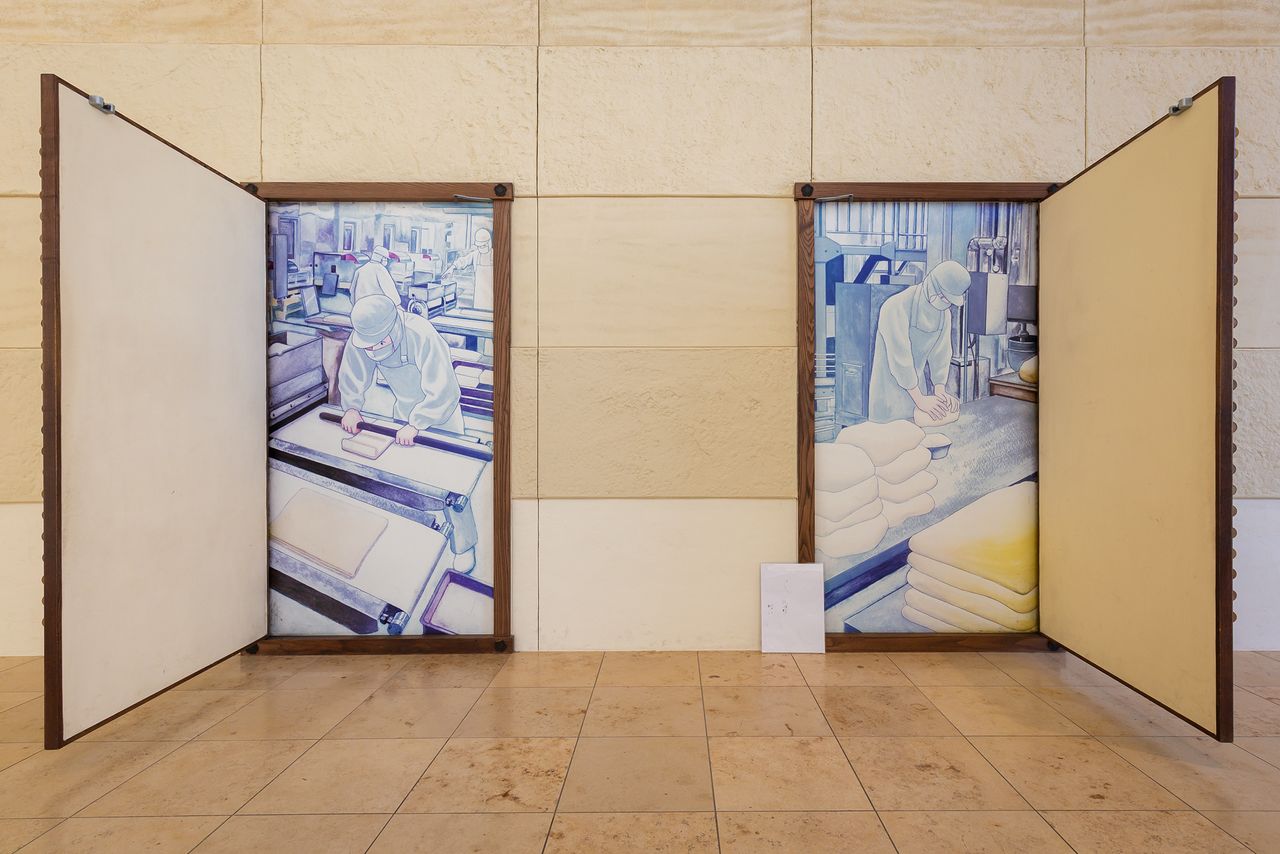 Illustrations cover the windows overlooking the factory floor where the dough is made to keep the process a secret. 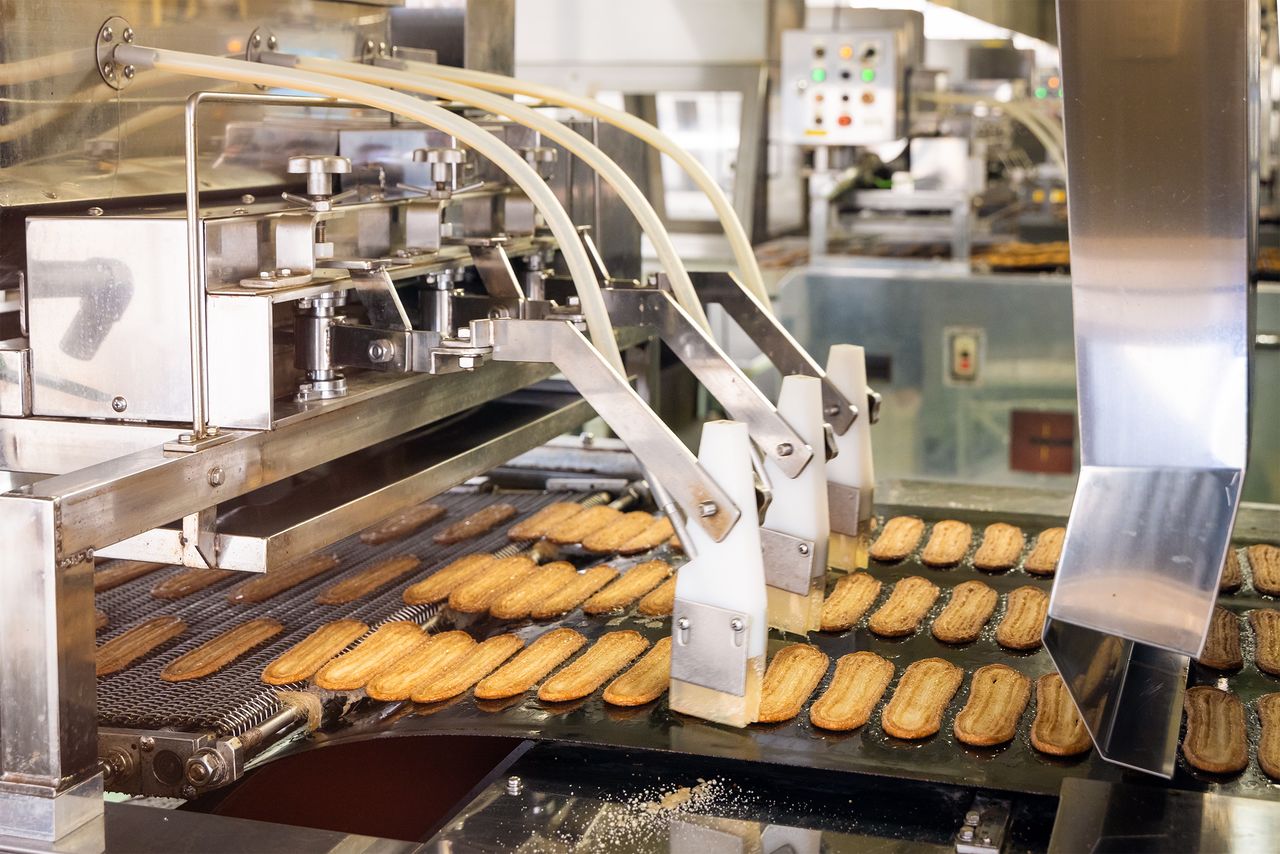 The only secret sauce ingredient ever publicly revealed is a small quantity of garlic, which helps mask the slight fishy odor of the eel extract and deepens the flavor of the snack. The idea of using garlic apparently came from gyōza (pot stickers), a favorite food in Hamamatsu, making Unagipie a distinctive product that combines the tastes of two of the city’s best-known culinary outputs.

Once the flaky treats have been baked, they are visually inspected for defects, then wrapped, packaged, and loaded onto trucks. Daily production runs to about 200,000 units. 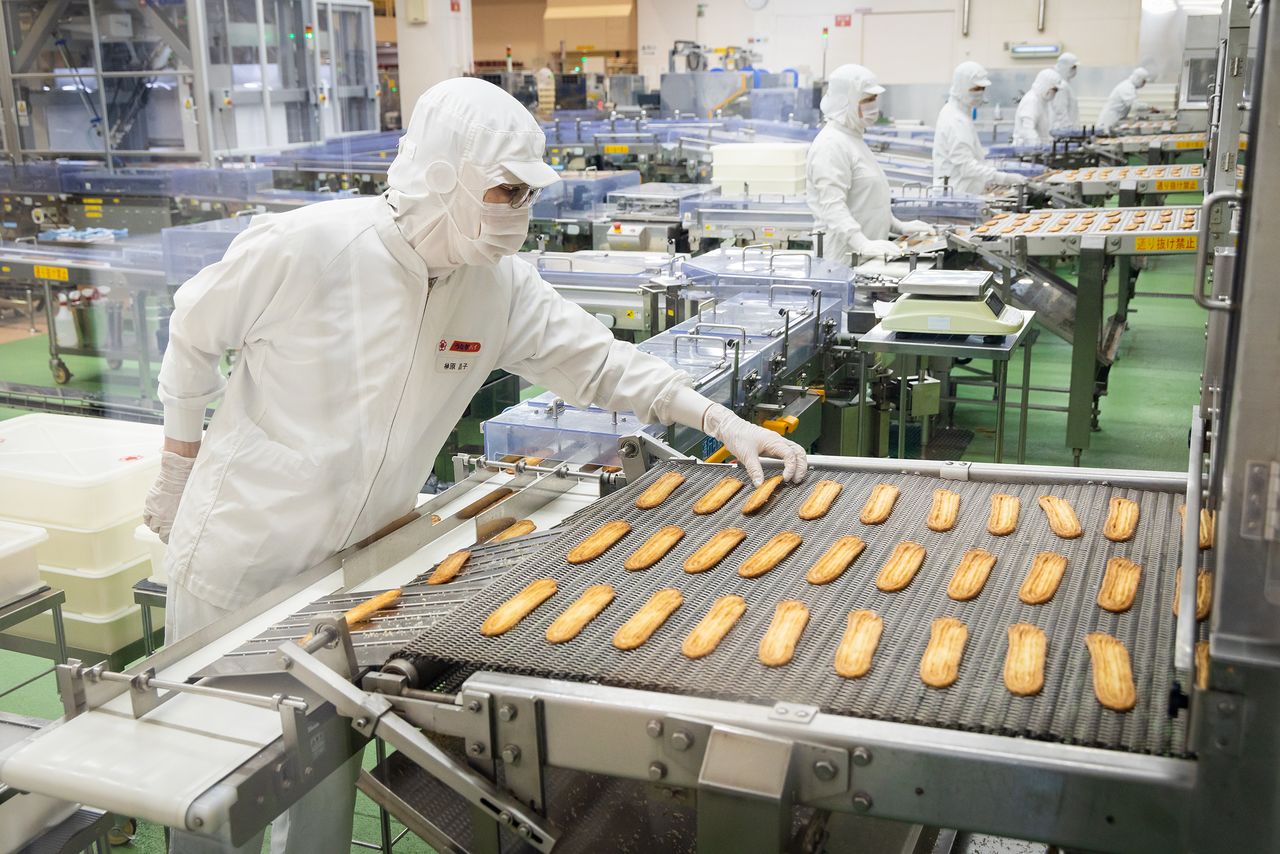 At the final stage, products are visually inspected. Broken or misshapen pastries are bagged and sold at discount prices. 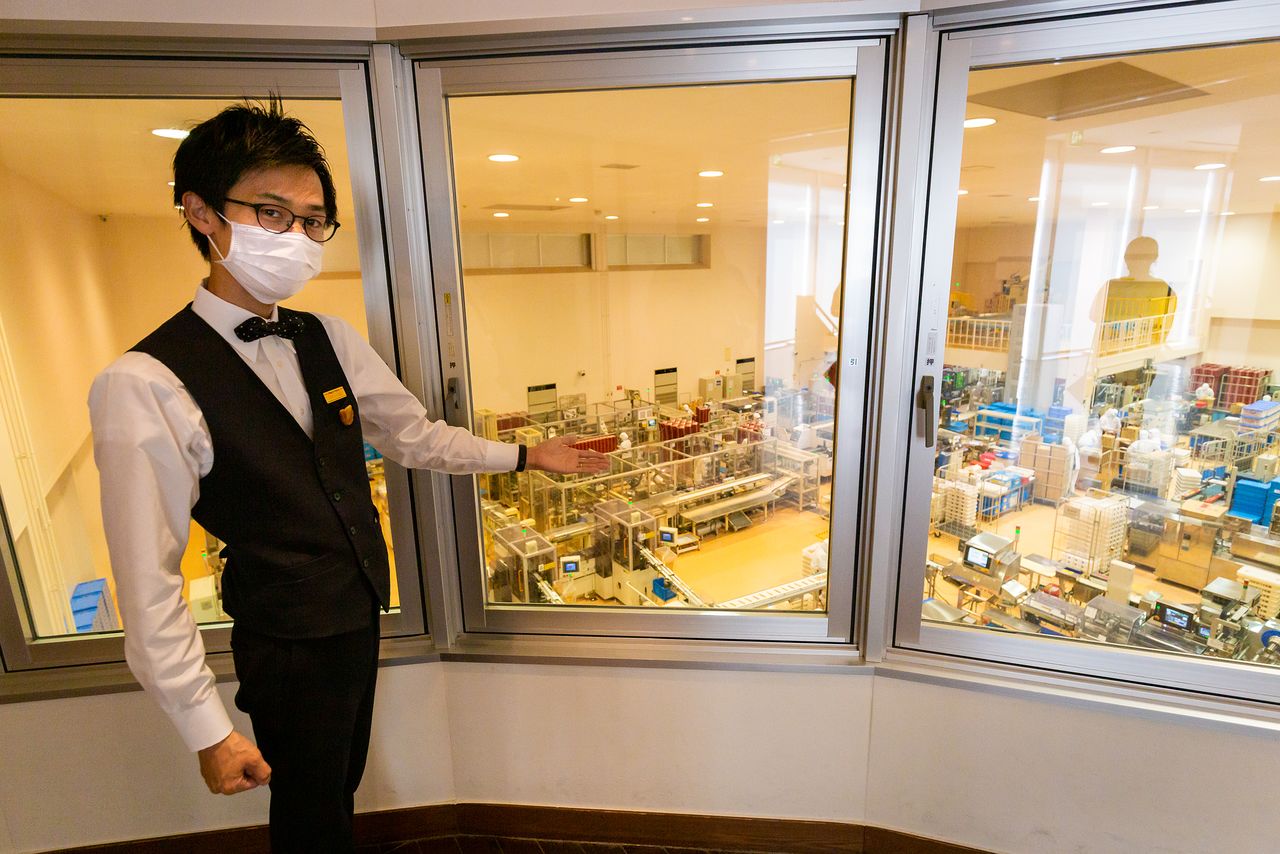 Windows on the second floor give a view of the product wrapping line in action.

While the standard Unagipie has remained unchanged for 60 years, the product line now includes variations featuring ingredients like almonds and a smaller versions sweetened with a honey-nut topping. There is even a top-end Unagipie with VSOP brandy and macadamia nuts intended to be the perfect “evening snack” to accompany alcoholic drinks.

After a tour of the factory, visitors can take a break to enjoy sweet treats at the onsite Unagipie Café. Fans of the snack are likely to appreciate it even more after an in-depth look at Unagipie’s history and production process. 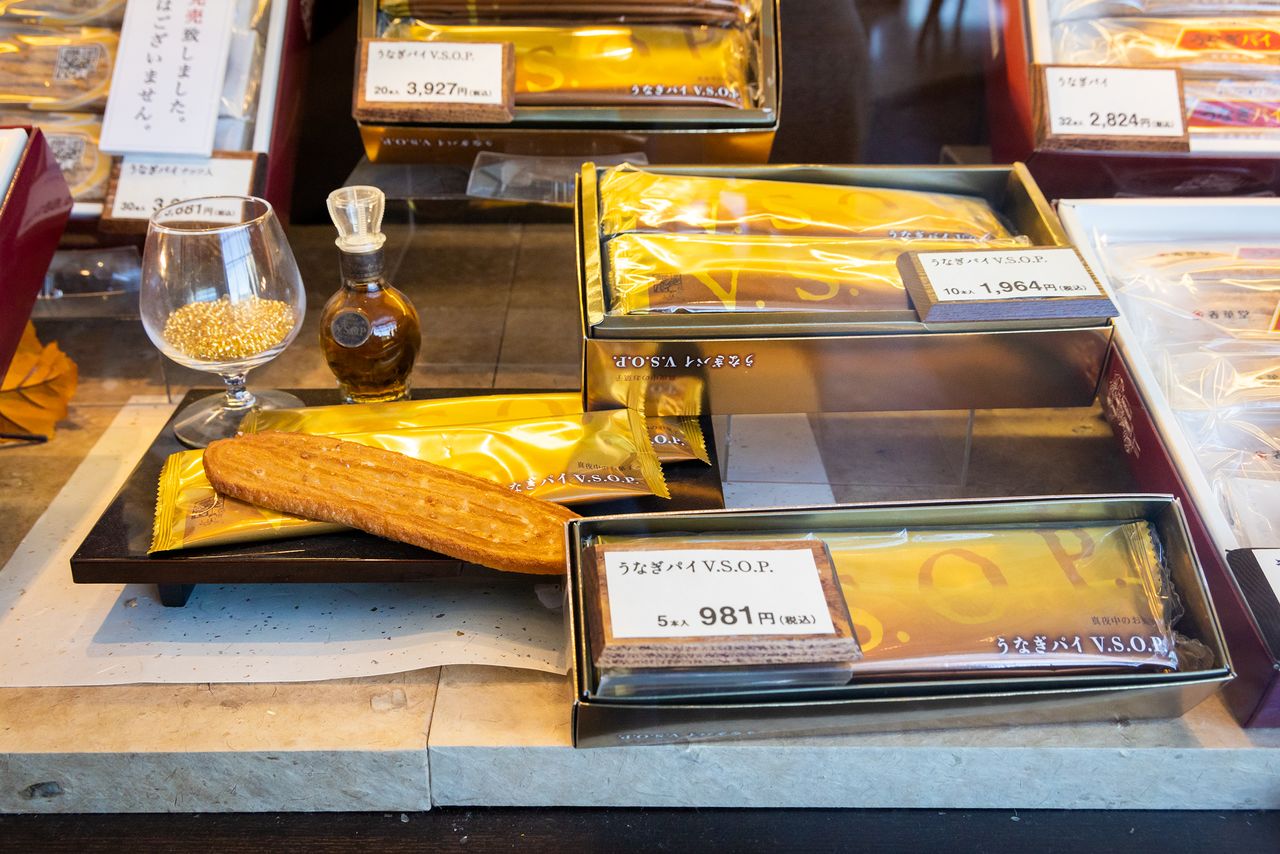 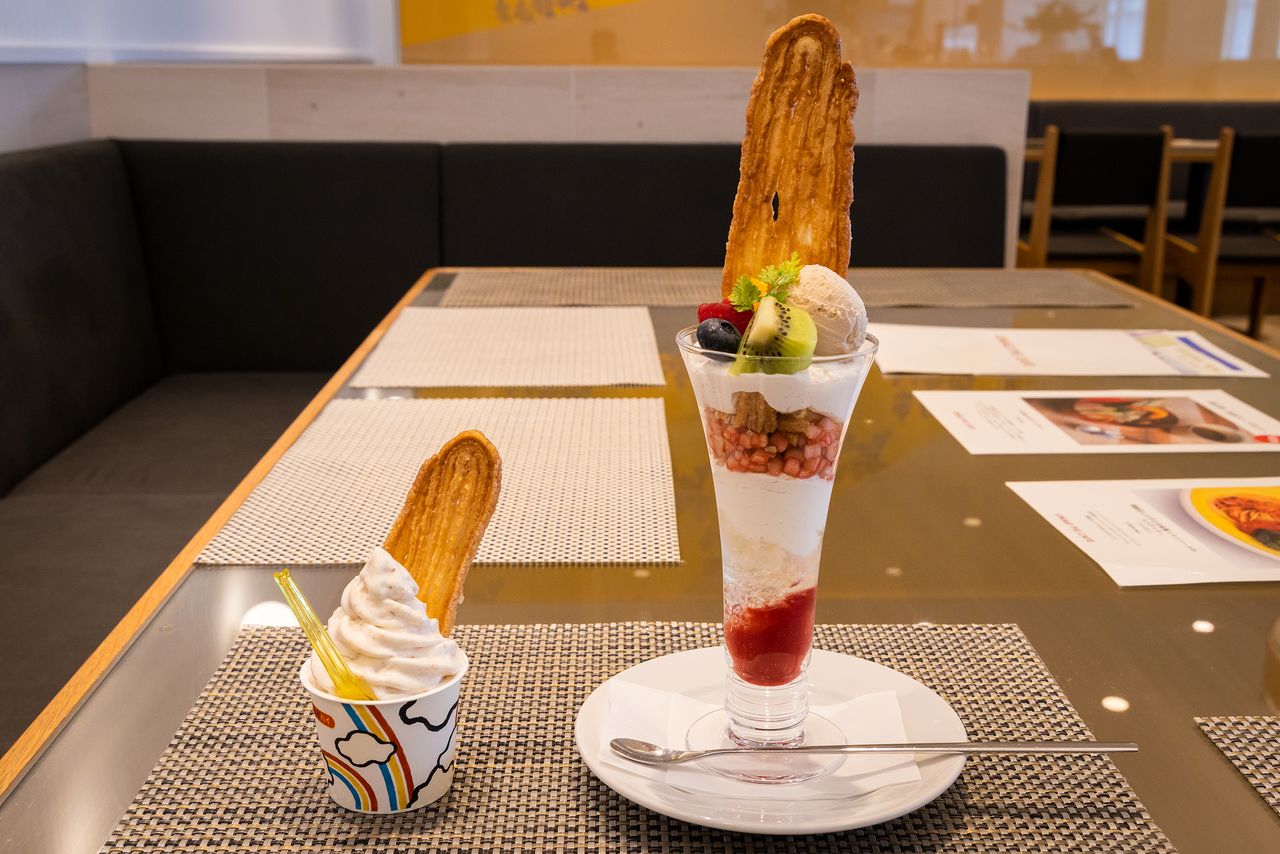 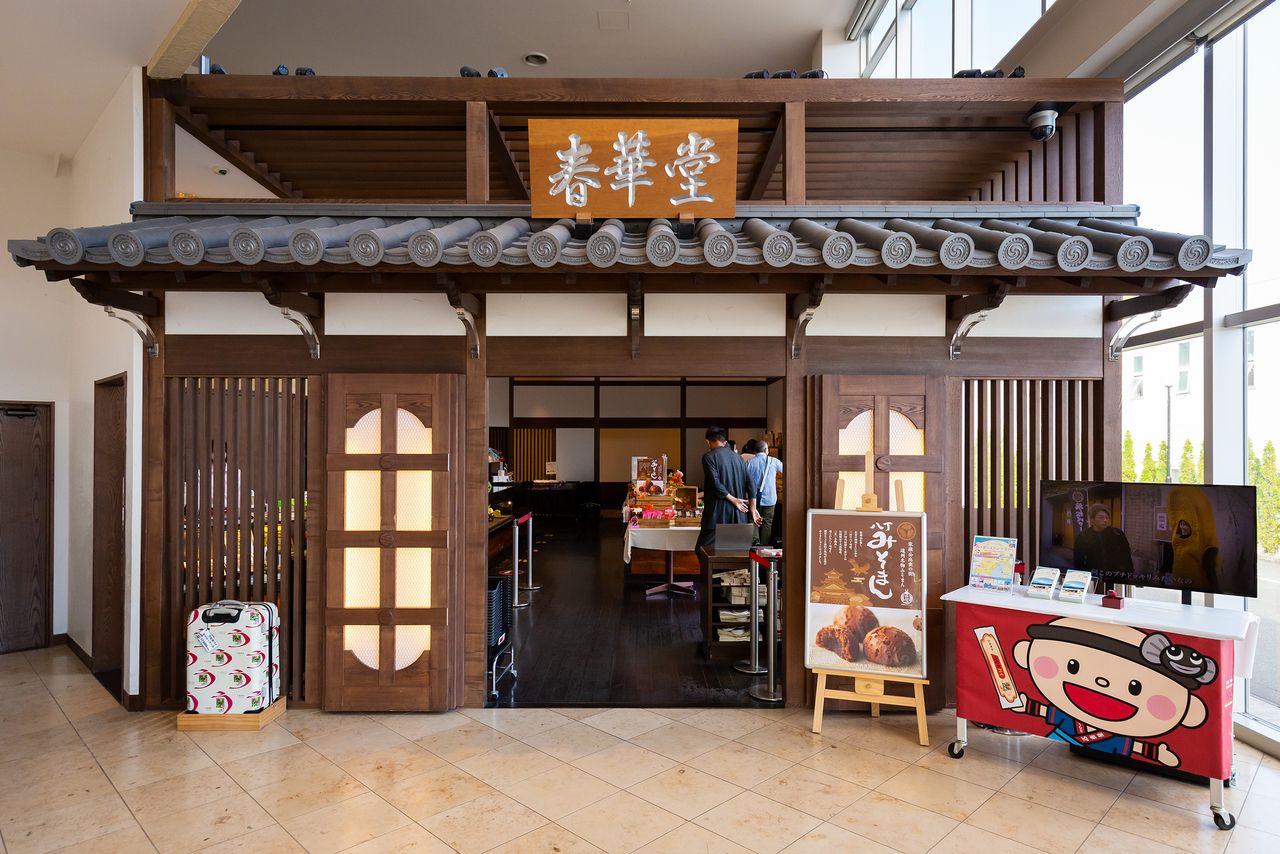 The factory’s store carries a variety of sister products.

(Originally published in Japanese. Reporting, text, and photos by Nippon.com. Banner photo: An Unagipie truck parked near the factory.)