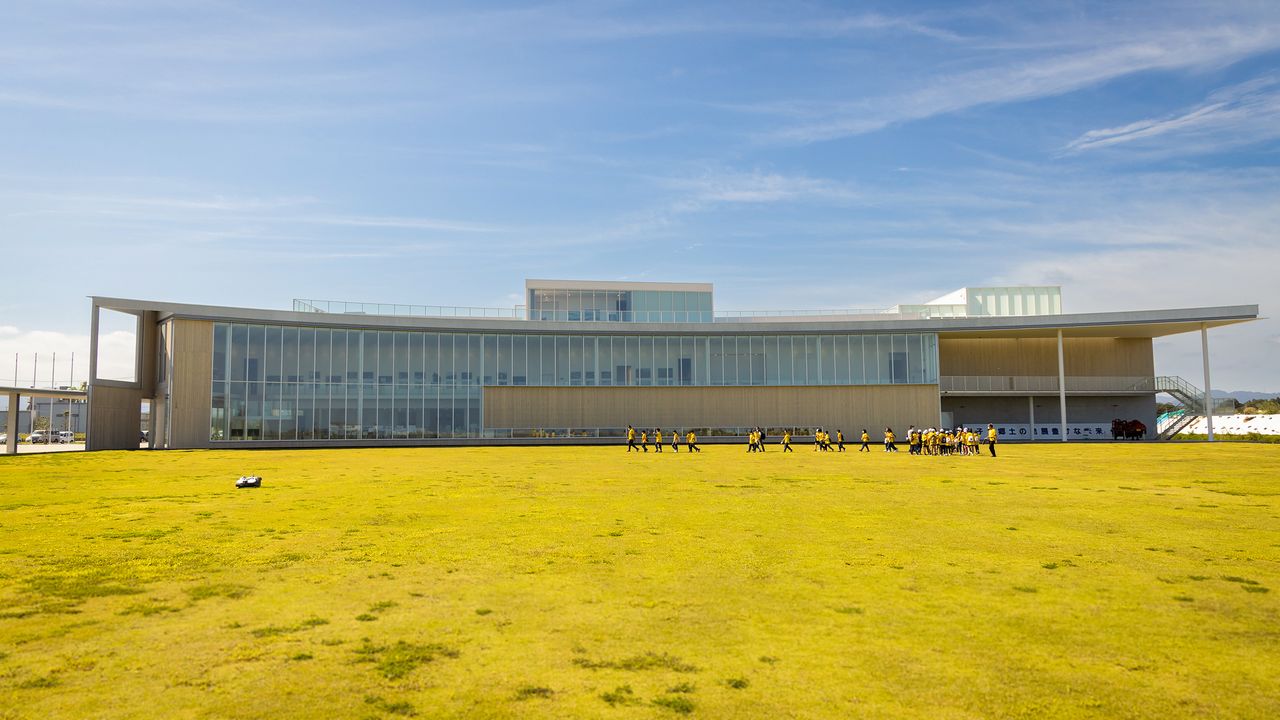 Memories and Rebuilding in the Fukushima Town of Futaba

Disaster Travel Nov 8, 2022
The town of Futaba in Fukushima Prefecture is home to the Great East Japan Earthquake and Nuclear Disaster Memorial Museum and the Futaba Business Incubation and Community Center, and offers easy access to a memorial museum in the ruins of the tsunami-damaged Ukedo Elementary School in the neighboring town of Namie.

Alighting at JR Futaba Station in late September, I found that reconstruction of the area had made considerable headway, including a public housing project to the west of the station and the newly built Futaba town office to the east.

The town of Futaba in Fukushima Prefecture was the last remaining community near the crippled Fukushima Daiichi Nuclear Power Plant completely under mandatory evacuation orders following the meltdowns at the facility in 2011. The government lifted its evacuation orders on August 30, 2022, for the designated reconstruction district around Futaba Station. The town office, which had been located in the nearby city of Iwaki, reopened in a new building on September 5. Construction of a 25-unit public housing facility along the west side of the station is complete, and residents began moving back in on October 1, after 11 years. 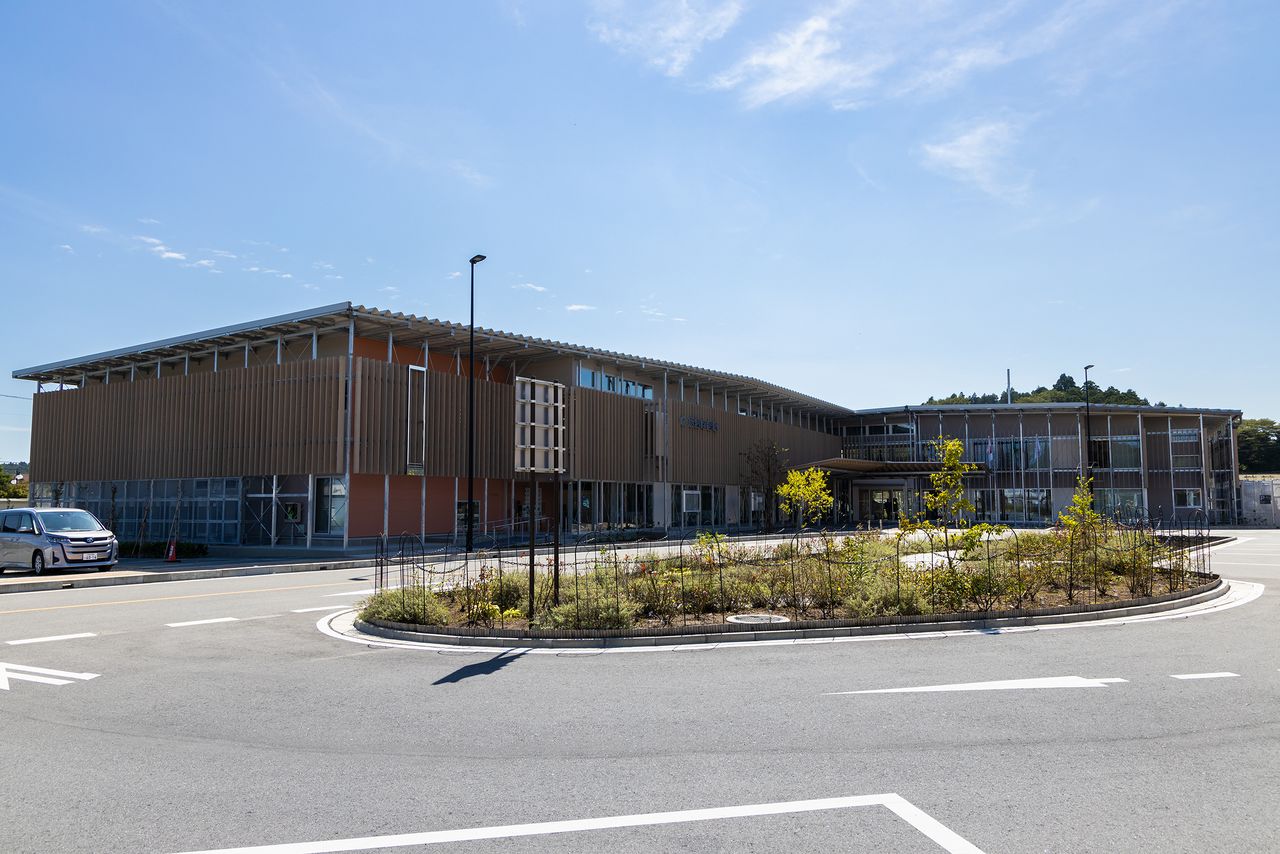 The natural wood construction makes the new municipal building stand out. Futaba had been without a town office since the March 2011 disaster. 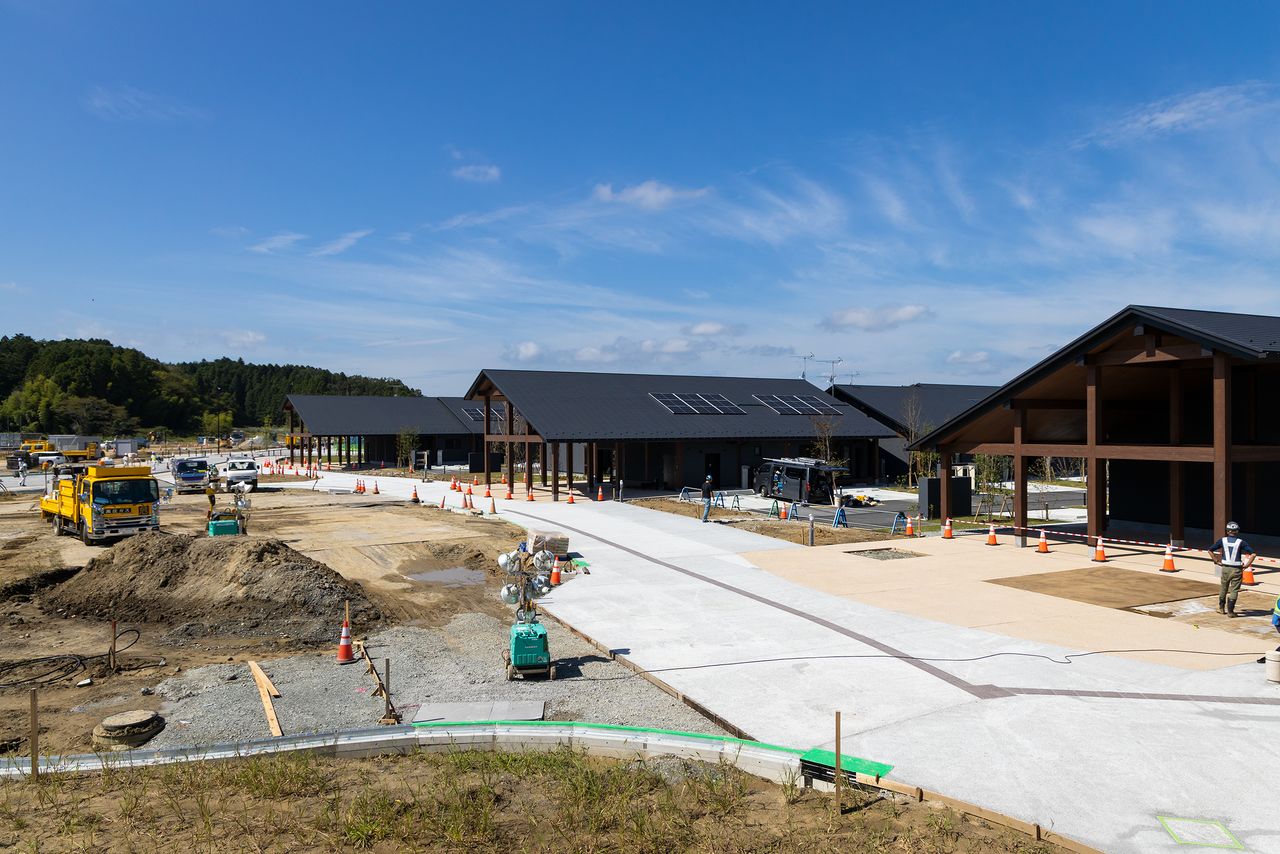 A public housing project for disaster evacuees west of Futaba Station is becoming a hub for community revitalization.

Nearer to the sea, in the industrial reconstruction area of Nakano, stand the Great East Japan Earthquake and Nuclear Disaster Memorial Museum and the Futaba Business Incubation and Community Center (F-BICC), which have been open since autumn of 2020 to serve visitors and student groups touring areas of the Tōhoku region impacted by the disaster. Most visitors come by car or tour bus, but the facilities are also accessible by shuttle bus from Futuba Station or by bicycle, available through a locally run free public bike-sharing system.

Catching the shuttle bus from the Futaba Ekimae stop outside the station’s east exit, it takes only six minutes to reach the stop for the facility, Denshōkan Sangyō Kōryūsentā Mae. The short trip offers a chance to see how the town is rebuilding along the highway and provides occasional glimpses of vivid murals in the Futaba Art District. 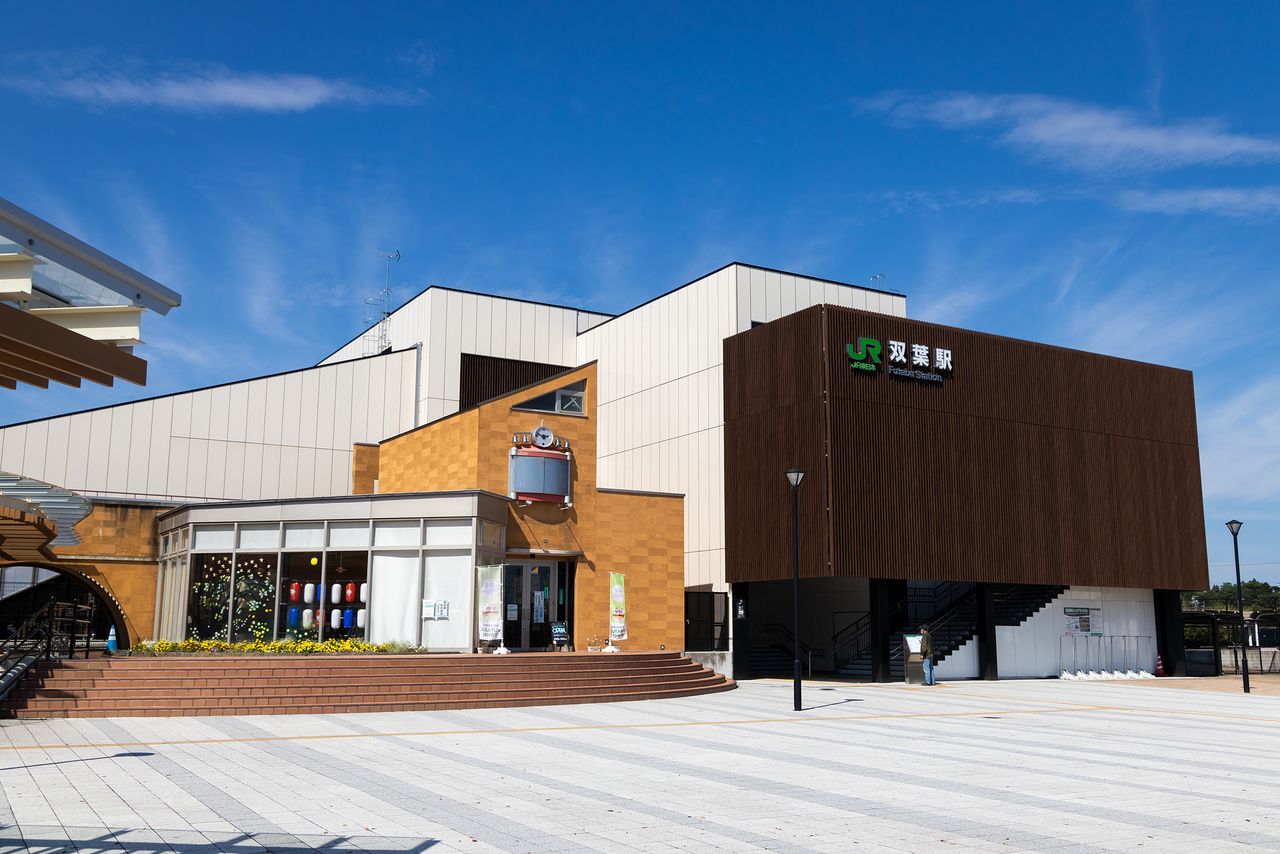 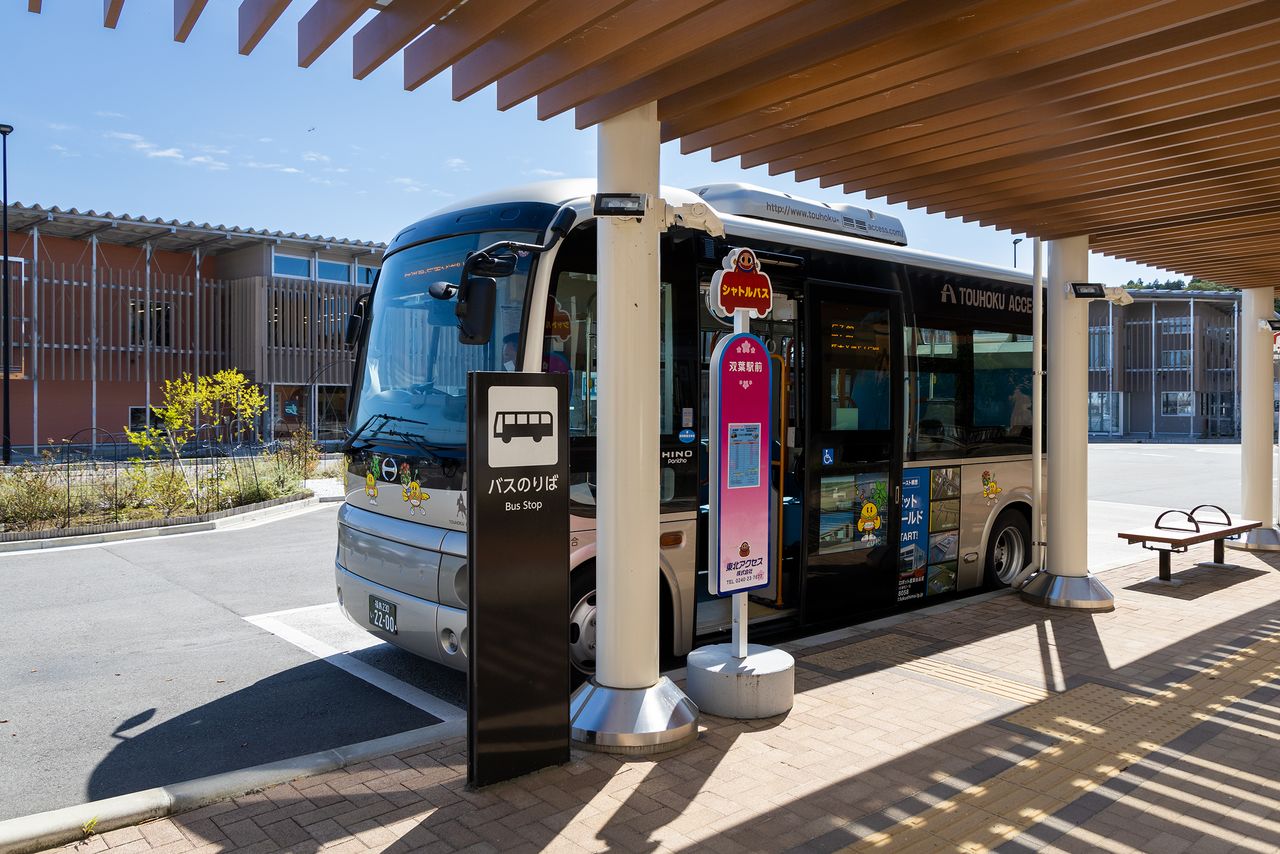 Shuttle buses between the station and the museum are timed to match the train schedule. One-way fare for adult is ¥200 and ¥100 for children. Discount round-trip tickets are also available. 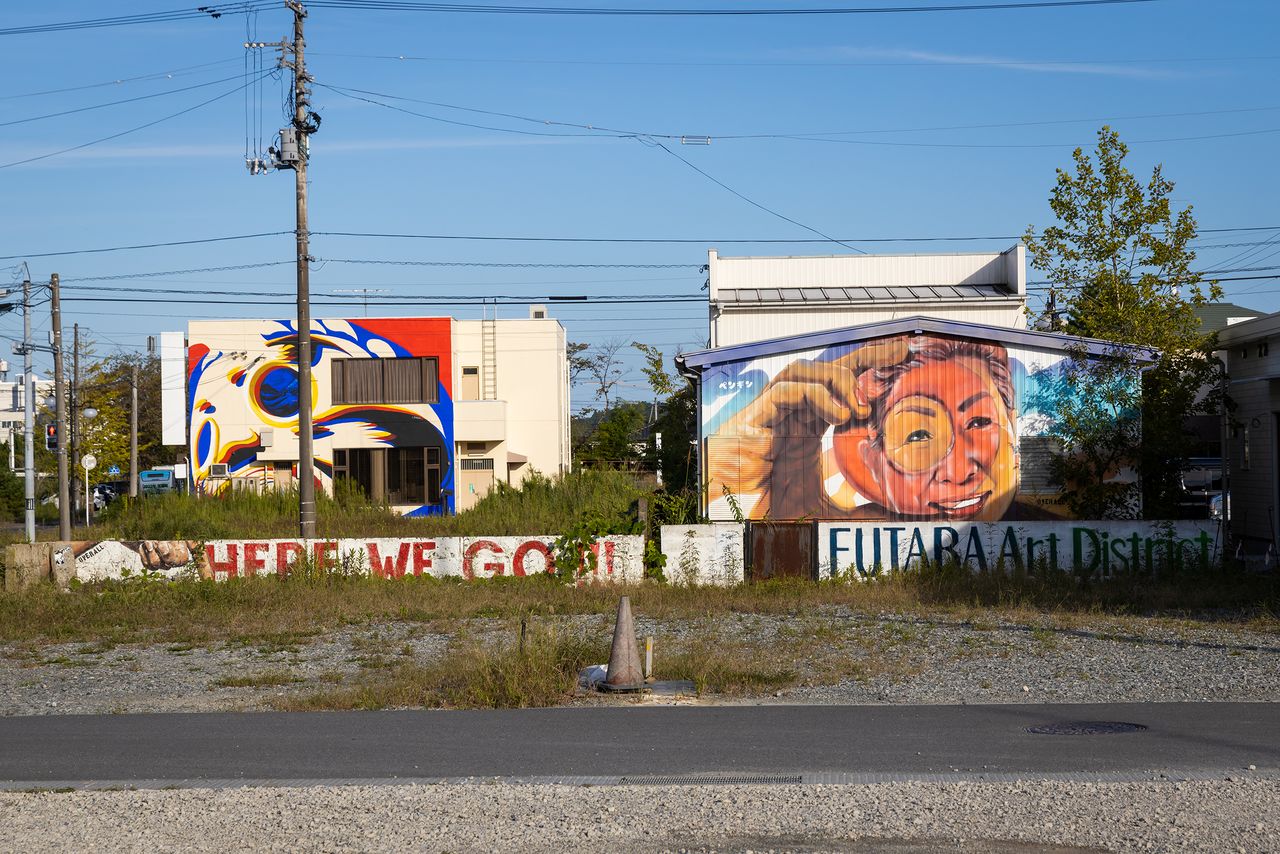 The town is dotted with giant murals, providing a touch of color to the long-abandoned area.

While riding the shuttle bus, the driver recommended I visit the viewing deck on the roof of the F-BICC building. The memorial museum’s seaside terrace has a lovely view, but the F-BICC rooftop deck is higher up and offers a glimpse of Fukushima Daiichi’s exhaust stacks and temporary waste storage facilities to the south.

The power plant, where decommissioning work continues, straddles the towns of Futaba and Ōkuma. Units 5 and 6 on the Futaba side were spared the hydrogen explosions that devastated Units 1–4 on the Ōkuma side. The F-BICC is some 4 kilometers away from the power plant itself, and looking across that distance with the naked eye offers a sense of the scale of the facility. 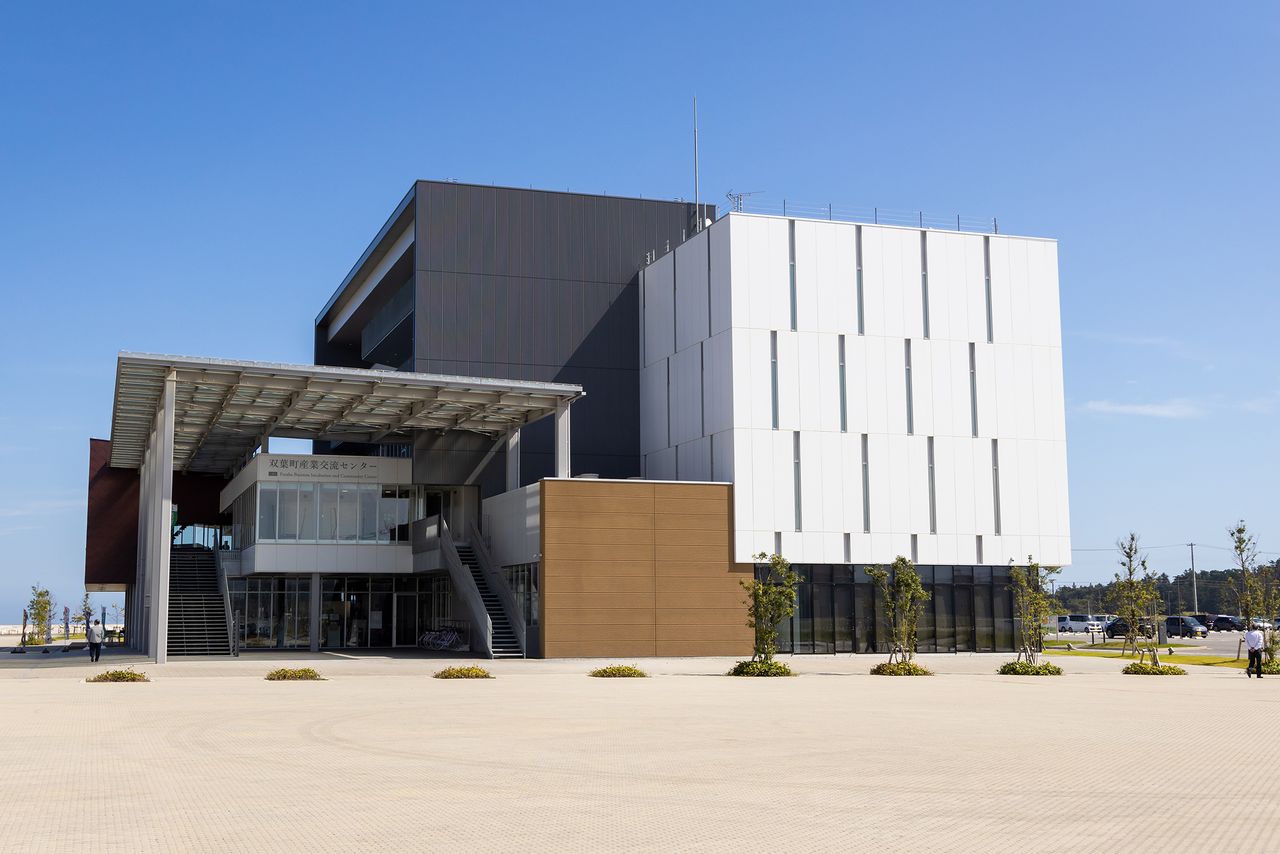 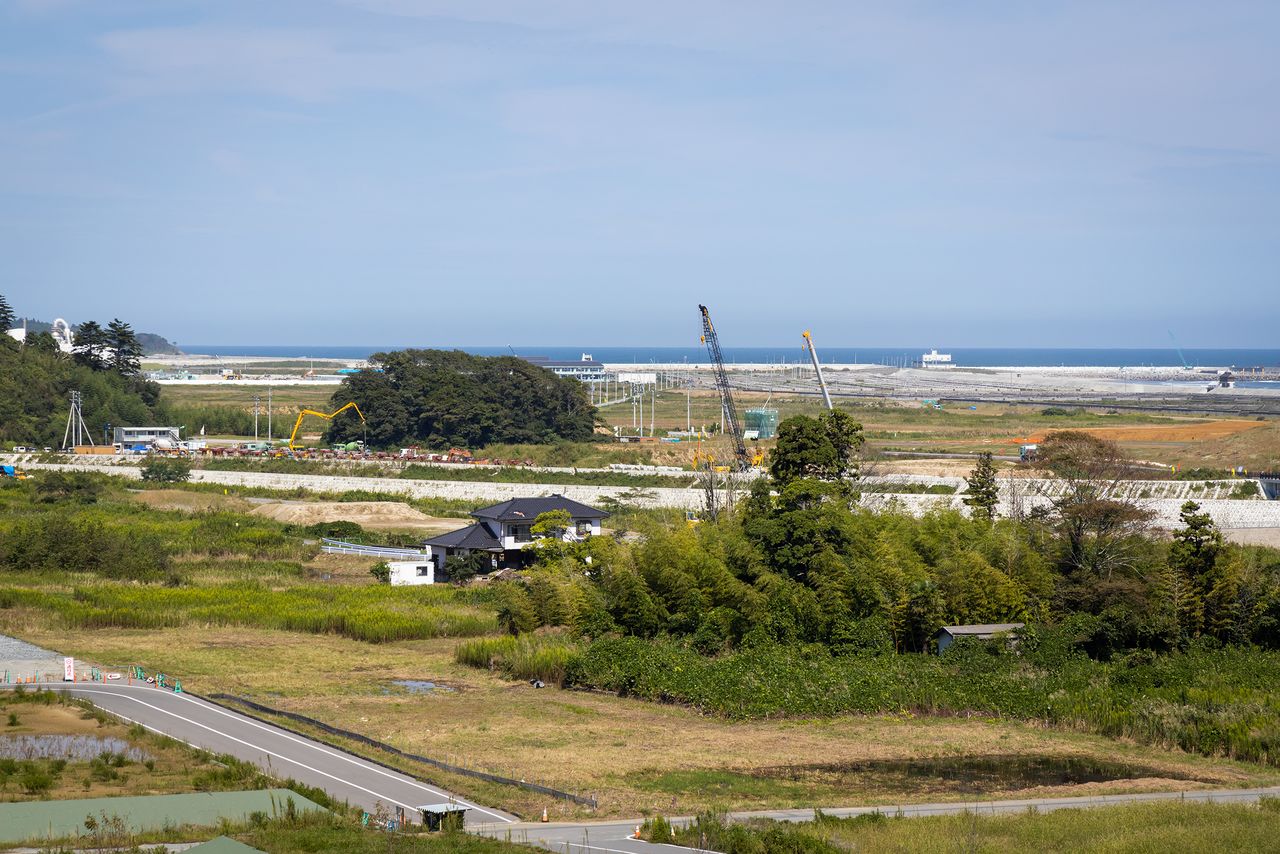 Construction on the Fukushima Prefecture Reconstruction Memorial Park is progressing along the seaside to the northeast. In the foreground, the ruins of houses in the Nakano residential district are visible. 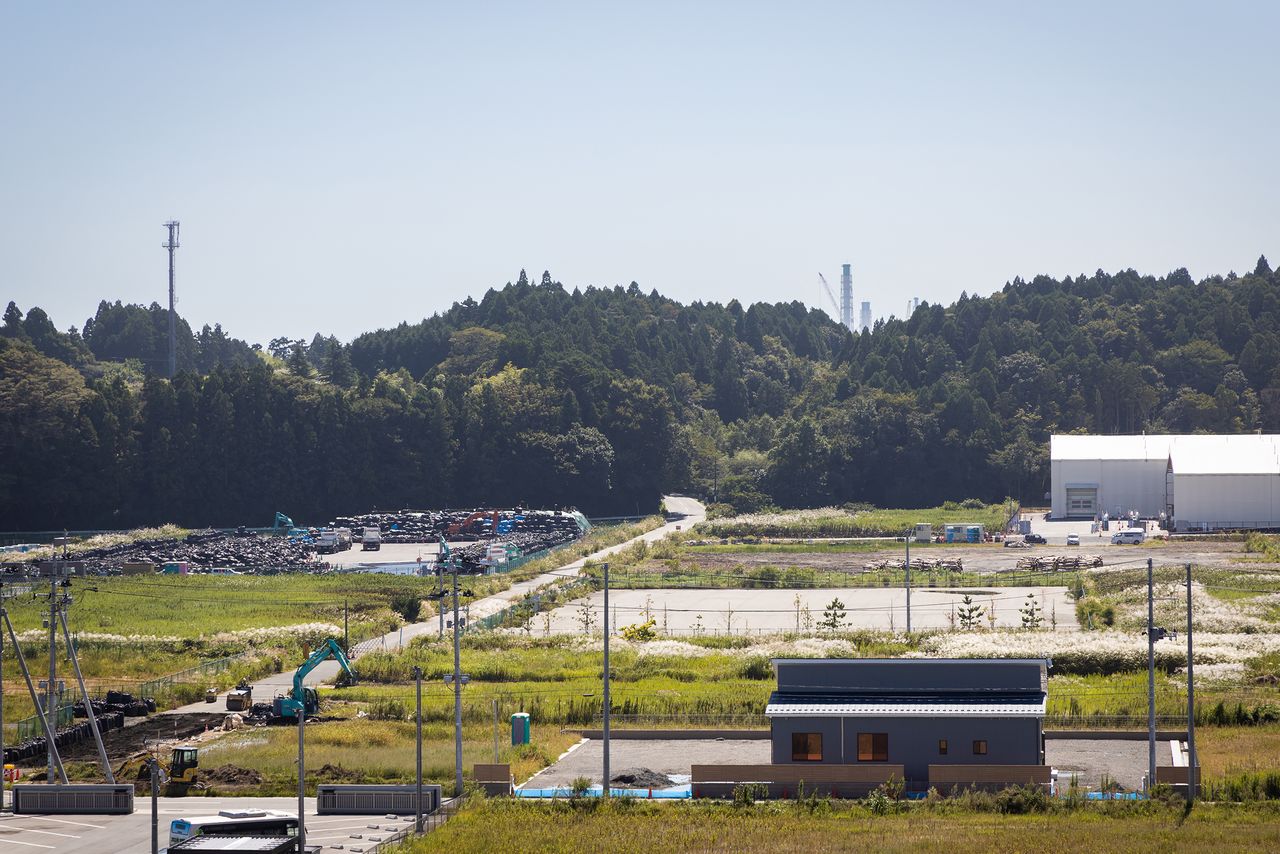 In the years since 3/11, communities across the Tōhoku region have built museums to preserve and share the lessons of the disaster. While most offer exhibits related to the tsunami, the Great East Japan Earthquake and Nuclear Disaster Memorial focuses on the Fukushima Daiichi accident and subsequent decontamination and decommissioning work, emphasizing the complexity of the compound disaster that Futaba experienced.

F-BICC holds sessions four times a day where people who experienced the disaster first hand share their stories in their own words. These presentations touch on both the immediate and long-term aftermath of the disaster, including the regret of survivors over being unable to properly care for aging parents while living in evacuation housing, the fear of losing one’s home and job, and conflicts with family and friends caused by the unrelenting emotional stress. Hearing such stories puts a human face on the disaster, making it feel all the more real and creating a closer bond of empathy between victims and visitors. The museum exhibits are also regularly rotated and updated, making repeated visits worthwhile. 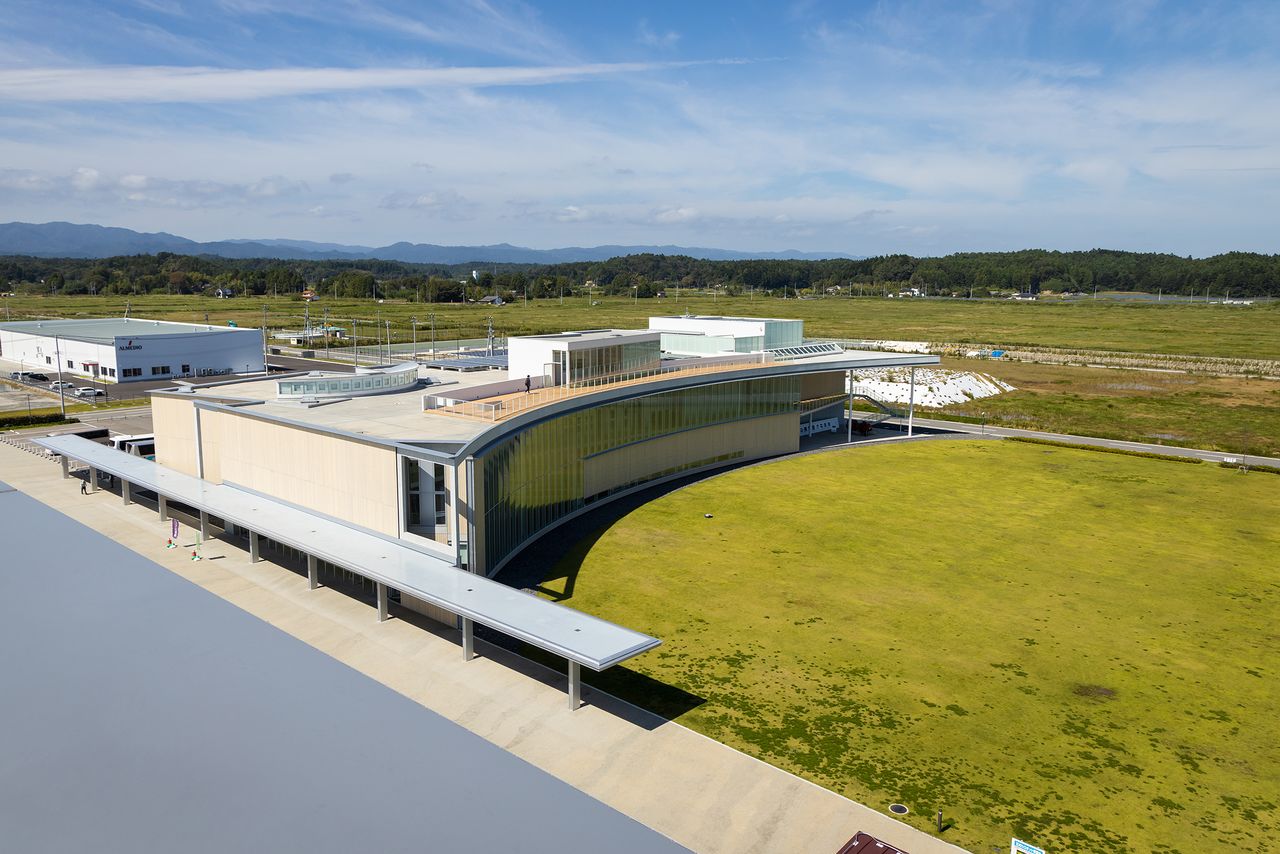 A view of the Great East Japan Earthquake and Nuclear Disaster Memorial Museum from the F-BICC rooftop. The museum also boasts an observation terrace on its roof. 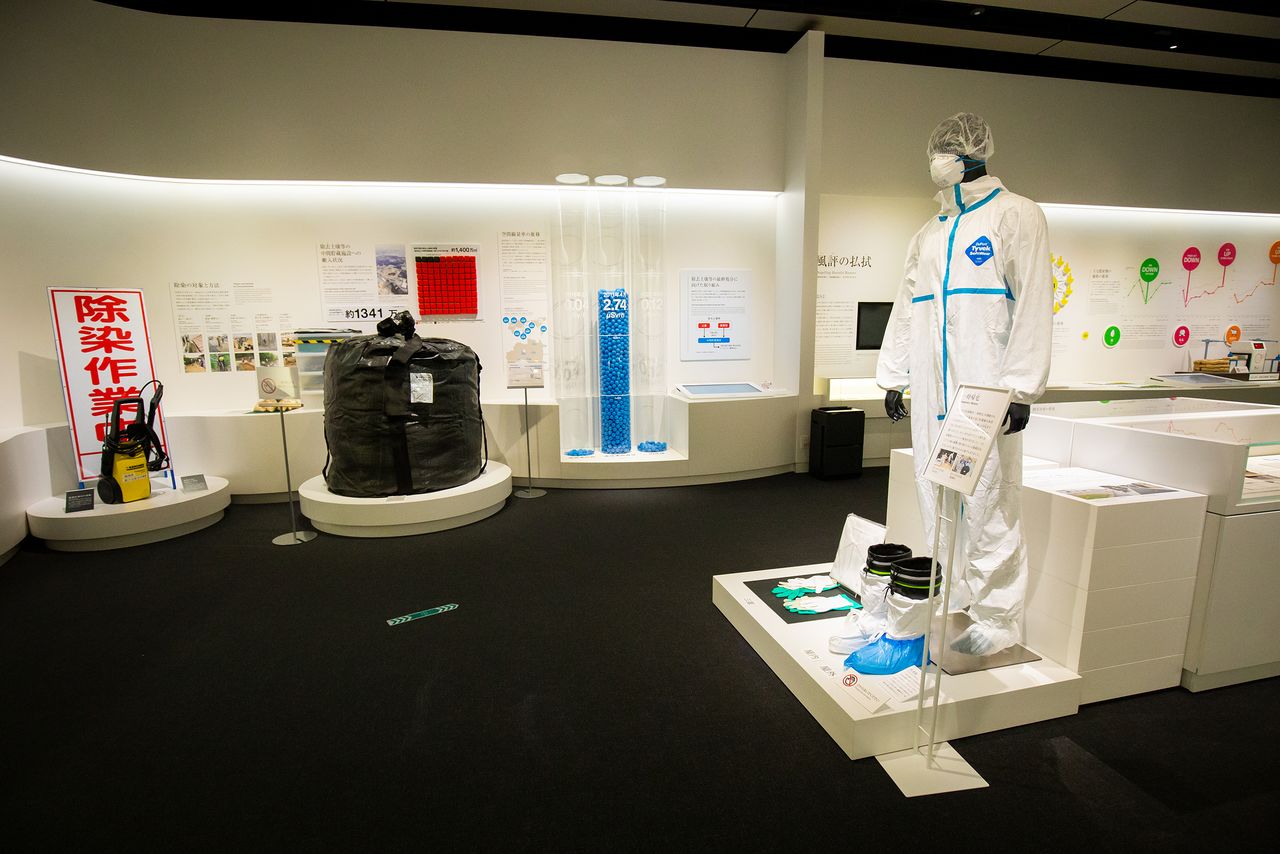 Exhibits at the museum show different aspects of the disaster. 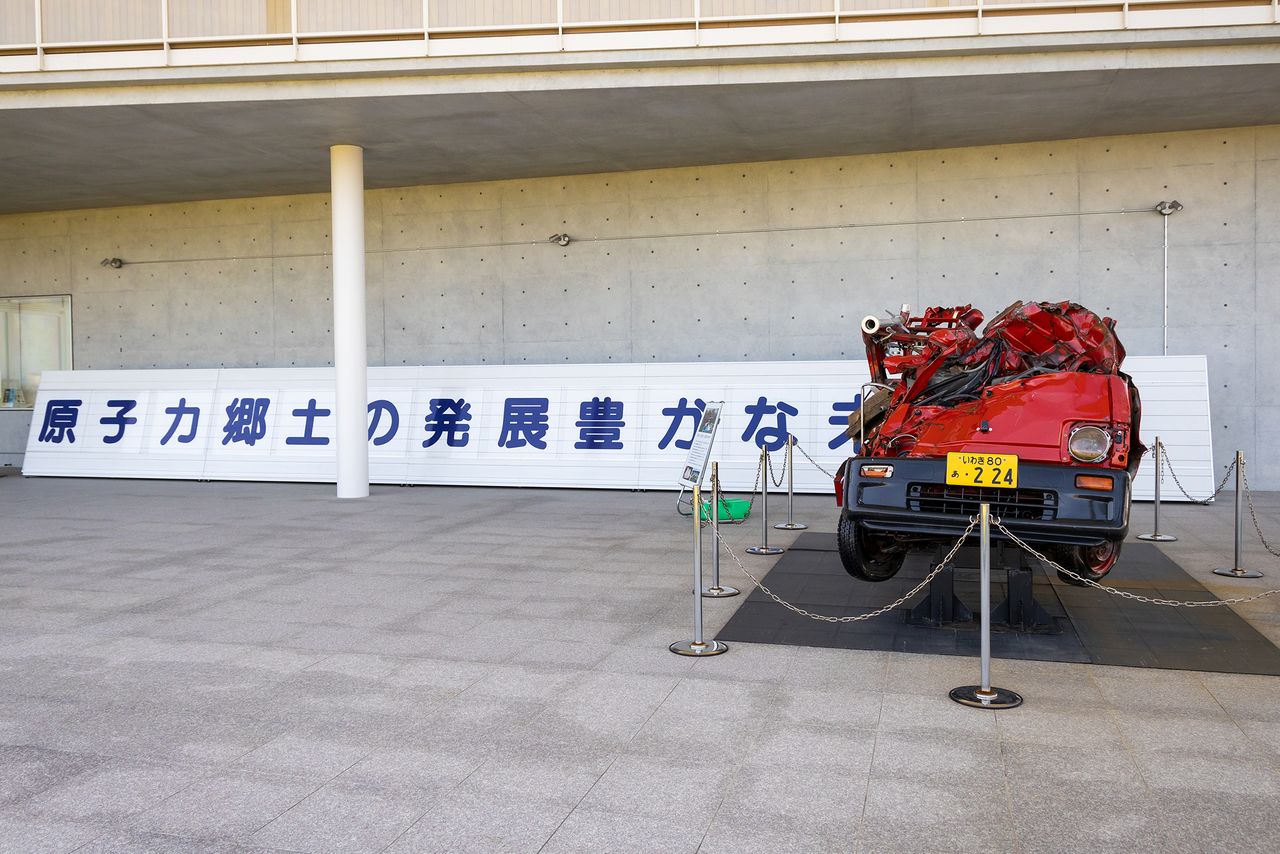 An outdoor exhibit of a fire truck crushed in the tsunami and a replica of a pro-nuclear-power slogan once displayed in the town.

The bike-share system offers a great way to branch out and visit the tsunami-ravished Nakano district, the construction site for the Fukushima Prefecture Revitalization Memorial Park, and the memorial museum housed in the old Ukedo Elementary School. A bicycle-sharing dock is located outside the F-BICC building. 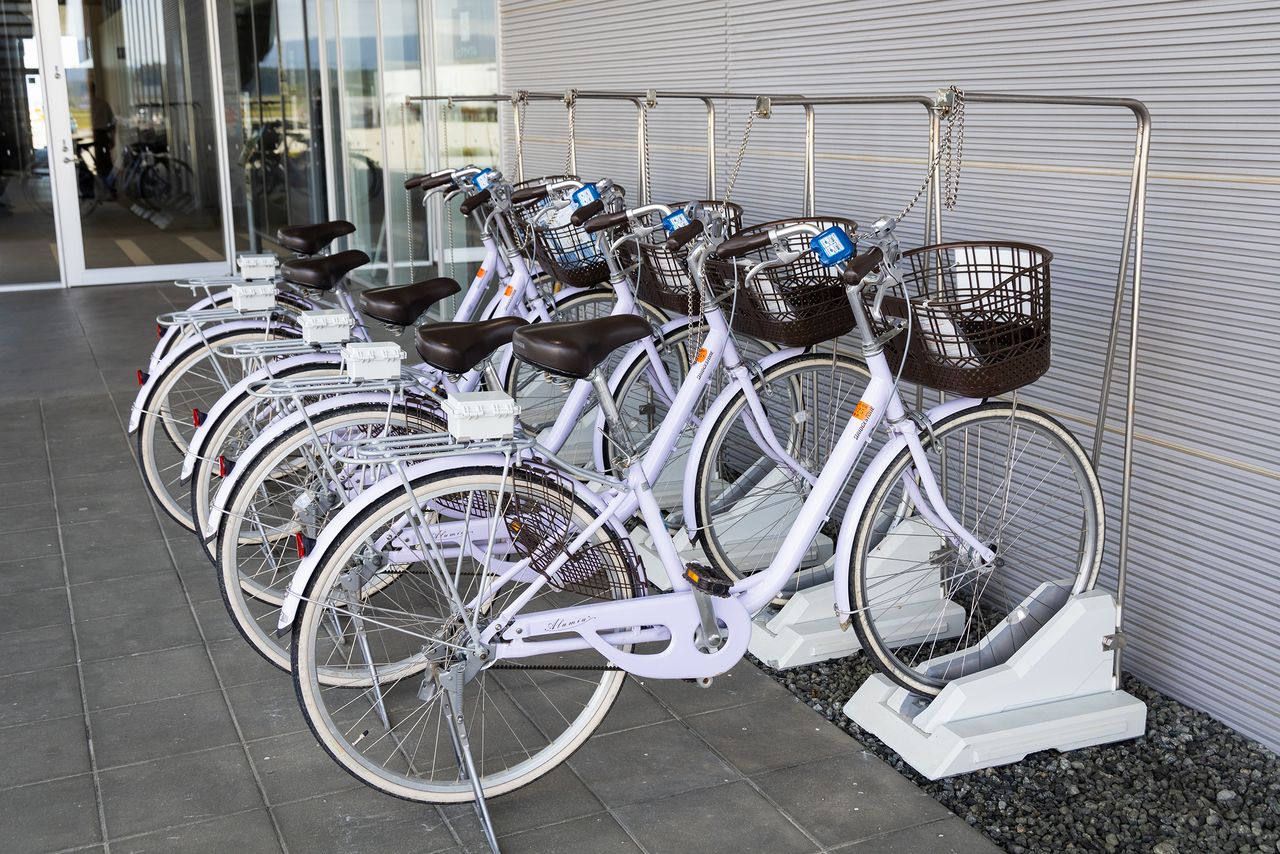 The bicycle-sharing dock outside F-BICC. 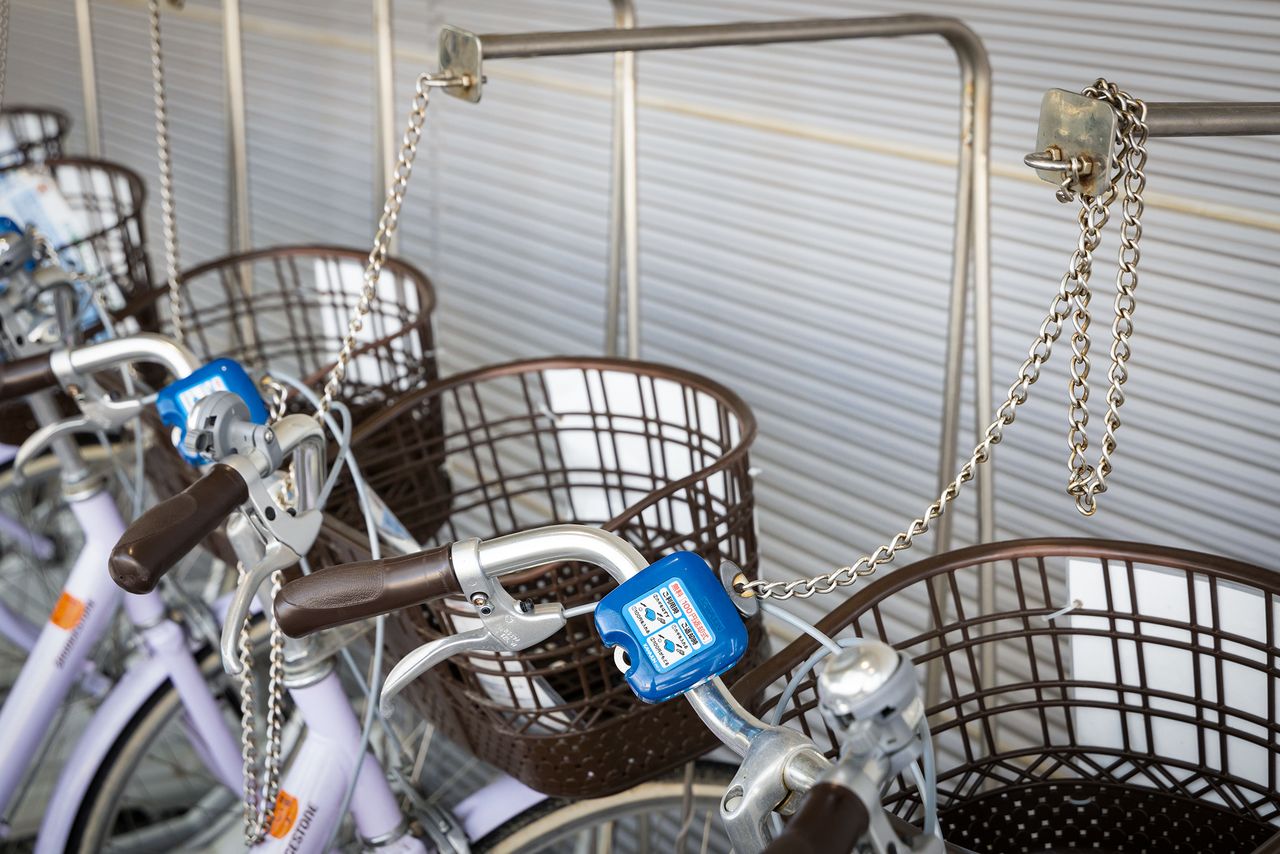 Bicycles are offered for a returnable ¥100 deposit. 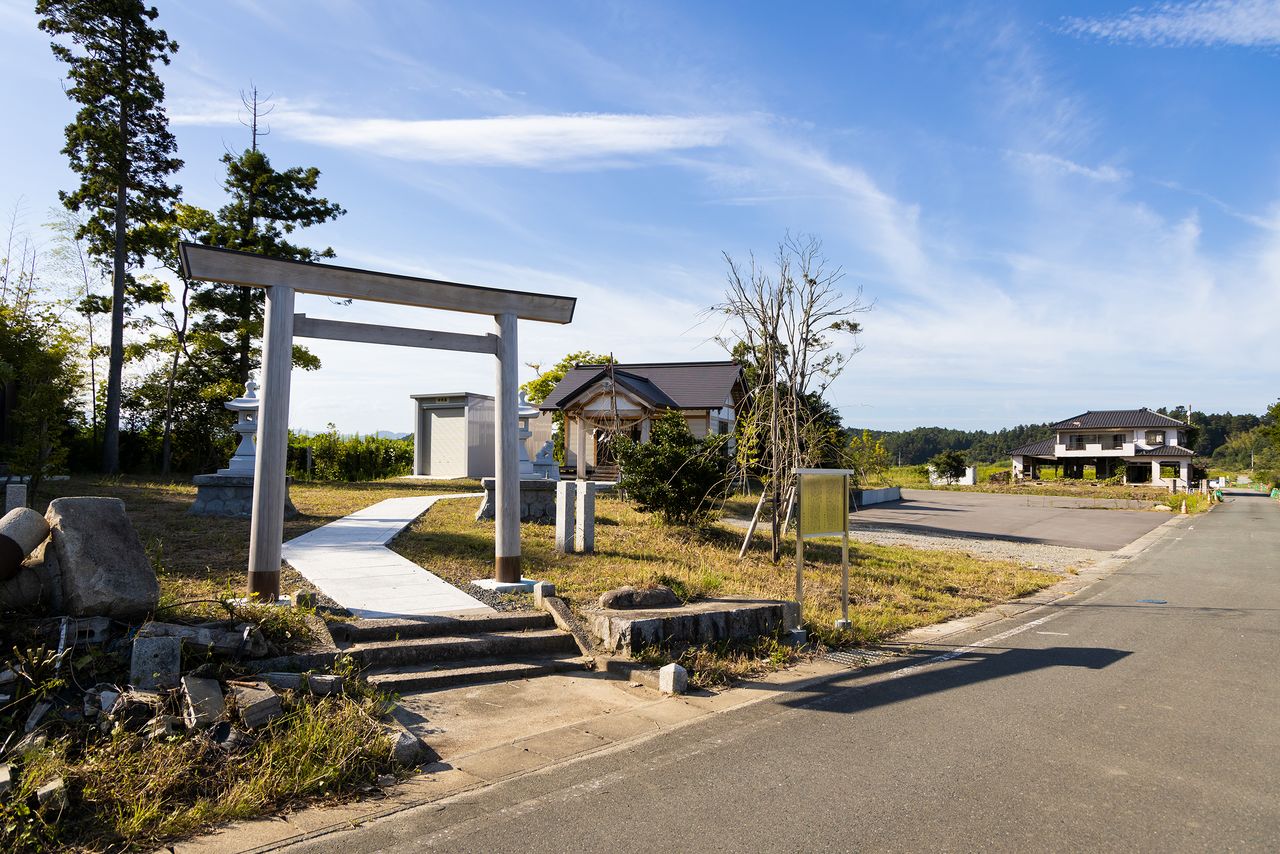 The ruins of the Nakano residential district stand testament to the scale of the tsunami. At center is the only reconstructed building, the Nakano Hachiman shrine.

The Reconstruction Memorial Park is scheduled for completion in 2025 and will include a “Hill of Remembrance” memorial and a plaza for flower offerings for victims. The only section currently open to the public is a viewing platform, which stands about a five-minute bicycle ride from F-BICC. The top floor stands 11 meters above sea level; the Hill of Remembrance will be the same height when completed. A marker post there reaches 16.5 meters, recording the height of the tsunami that devastated the area.

Five minutes further on, in the neighboring town of Namie, is Ukedo Elementary School. When the disaster struck, the teachers quickly decided to evacuate to nearby Mount Ōhira, and all 82 students in attendance were spared harm. The same cannot be said of the school building, though. The ceilings and walls in the first-floor classrooms were torn away, revealing sections of the underlying steel. The shattered building has been preserved as a testament to the importance of tsunami preparedness. The flooded second floor and newly constructed administration building display videos and other exhibits showing the state of Namie at the time and sharing the experiences of victims. 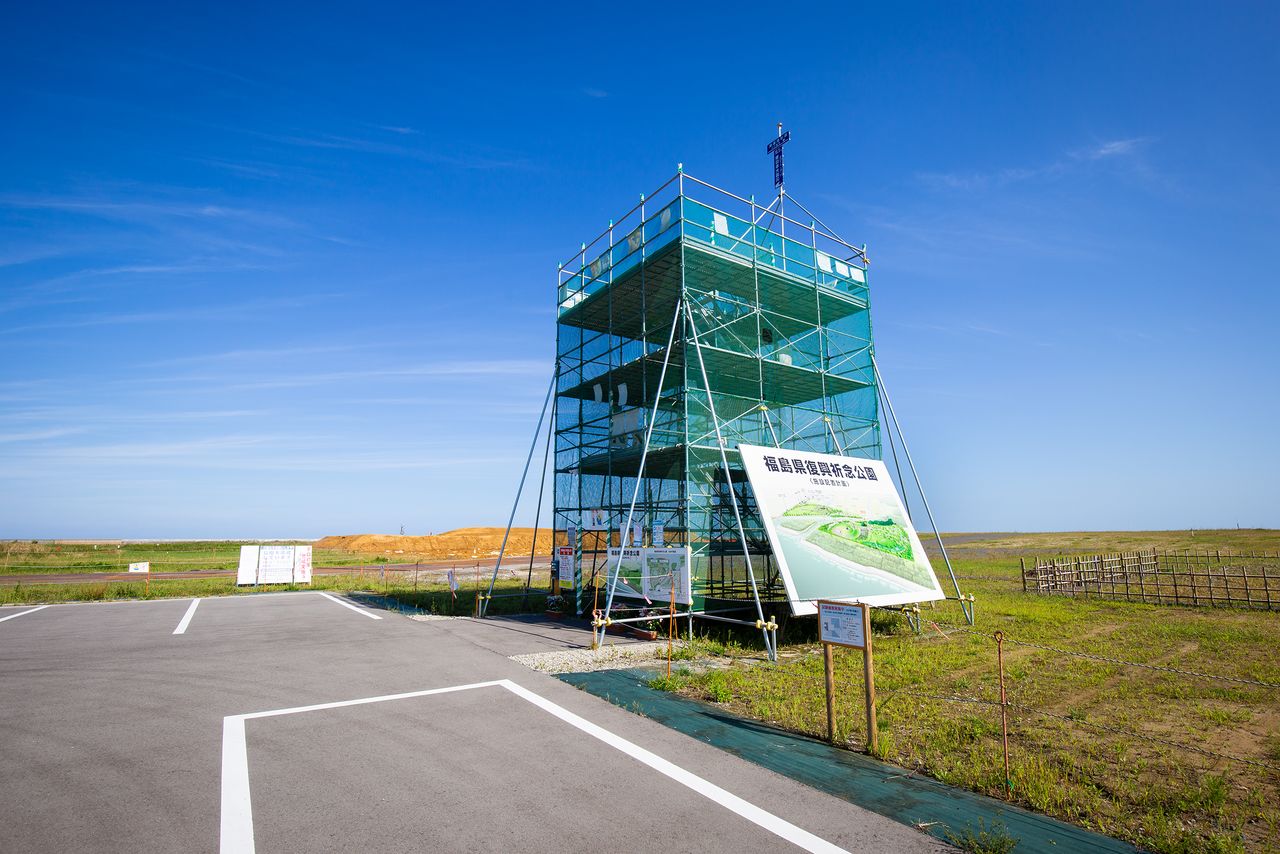 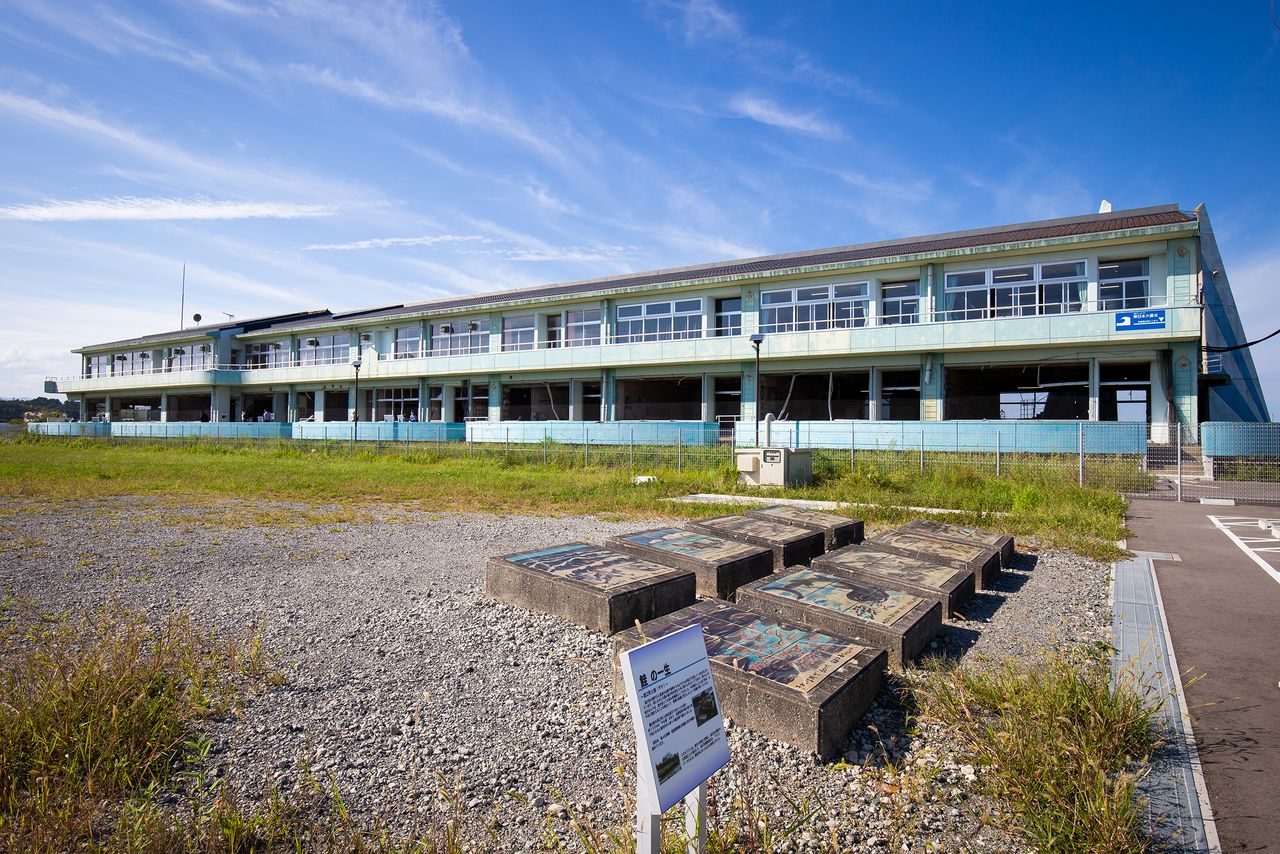 The first floor of Ukedo Elementary School was completely swamped by the tsunami. The second floor has panels and other exhibits about disaster-struck Namie. 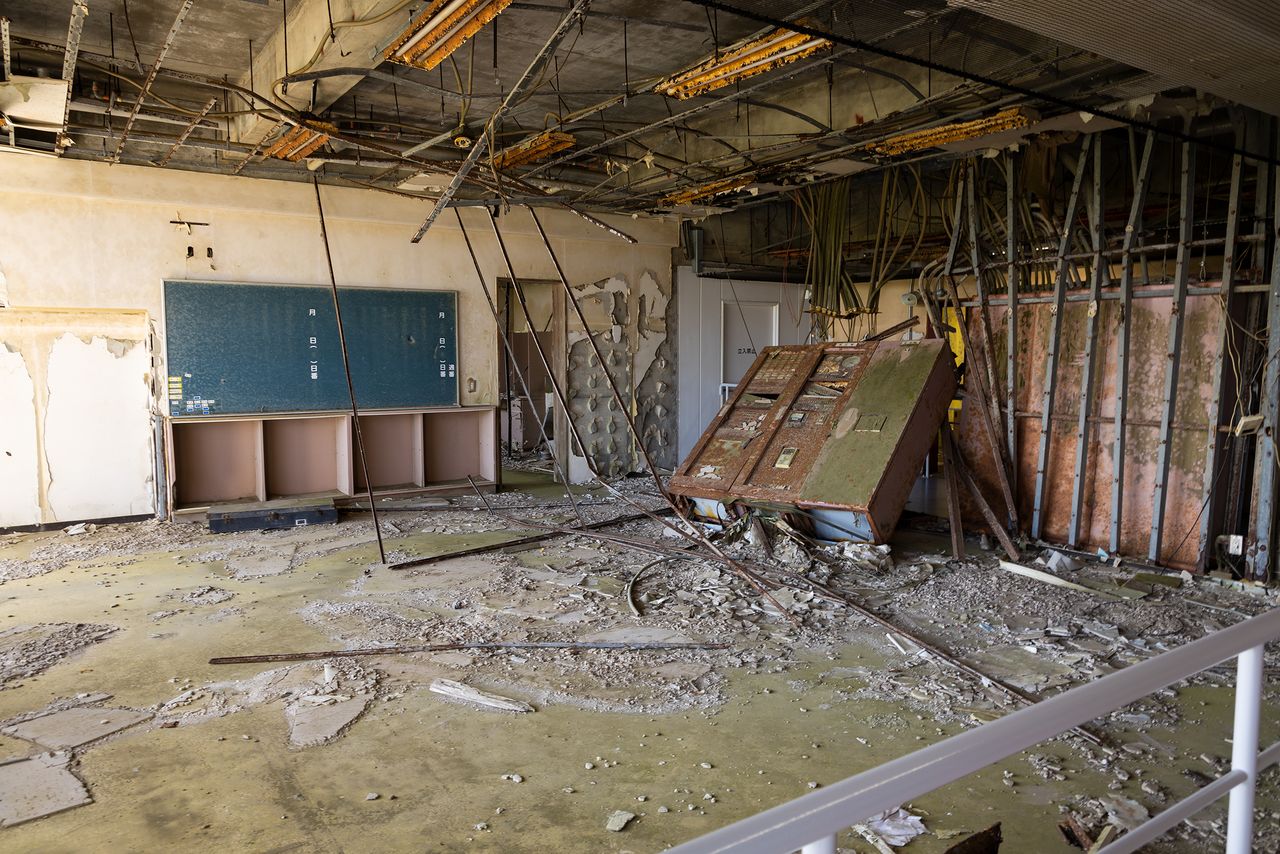 A devastated classroom demonstrates the destructive power of the tsunami.

F-BICC also has areas for visitors to dine or rest. The restaurant Penguin inside the food court was located at Futaba Station until 2007 and was popular with high-school students returning home after classes. Operators of the facility decided to bring back such businesses in hopes it would entice former residents to return to Futaba in search of familiar flavors. Penguin has improved on its trademark “special sandwich,” but the soft-serve ice cream and other treats are the same as always.

Sendantei, a shop specializing in Namie-style yakisoba, is another popular local shop. The dish of stir-fried noodles is made with extra thick ramen-style noodles, pork belly, and bean sprouts, and has won awards as an example of regional “B-class gourmet” food loved by ordinary diners. Sunplaza Futaba, next to the food court, offers an array of local specialty items and is a great place to browse for souvenirs while waiting for the shuttle bus. 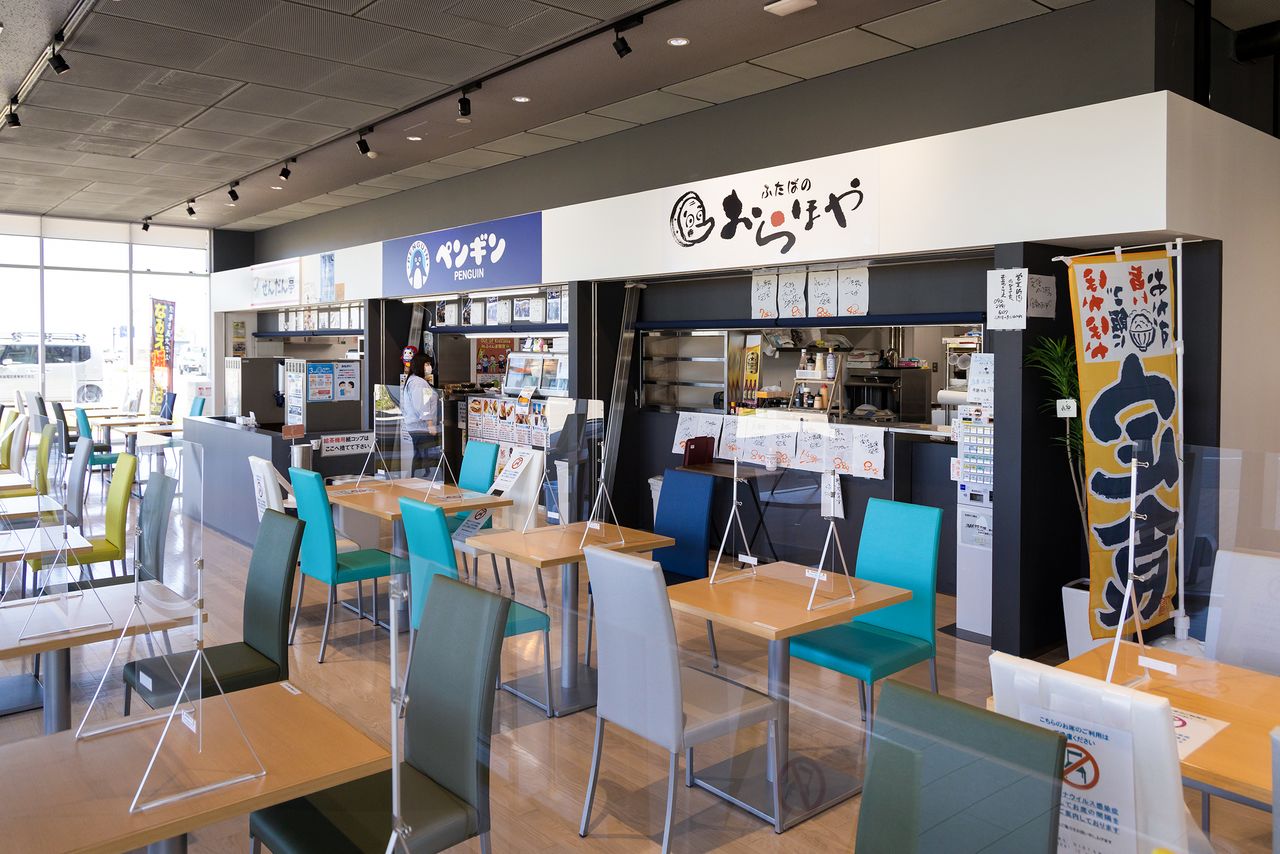 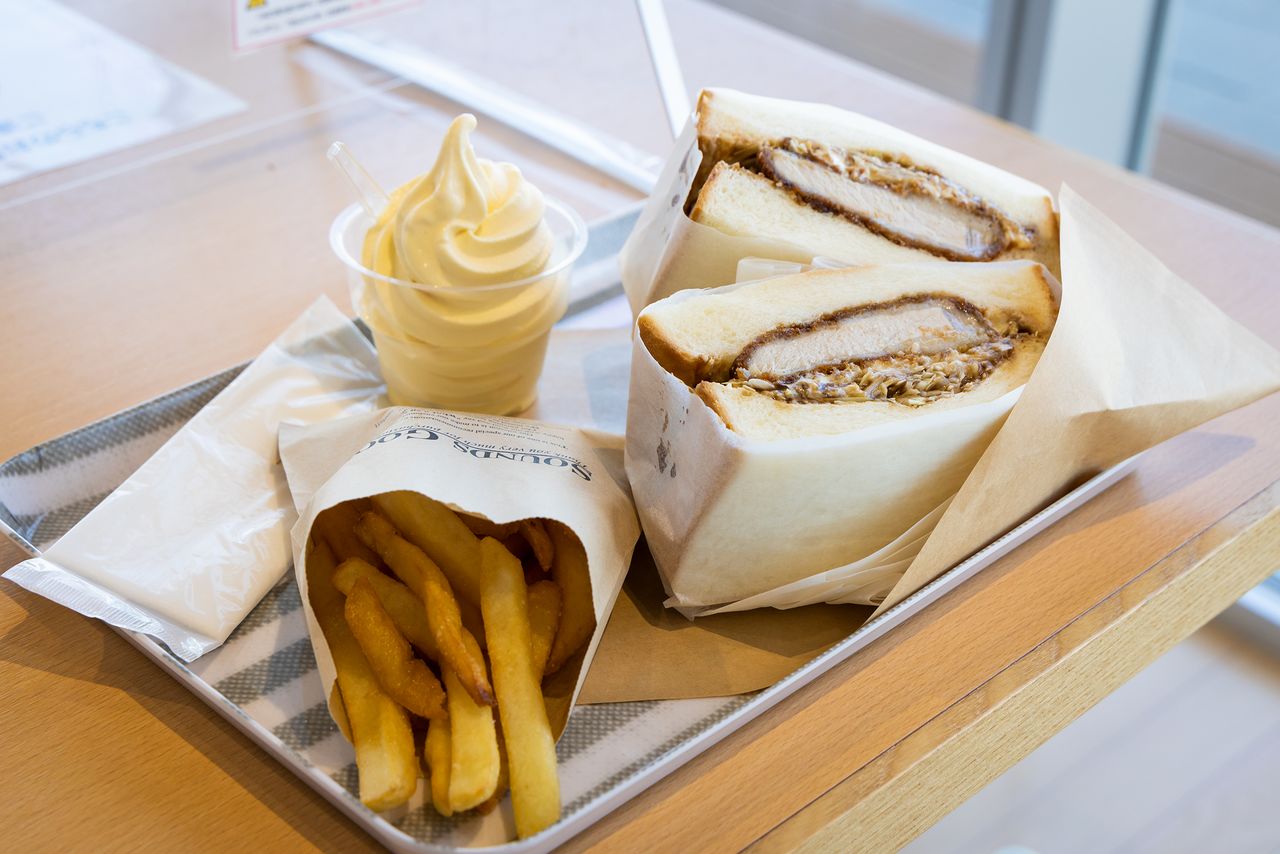 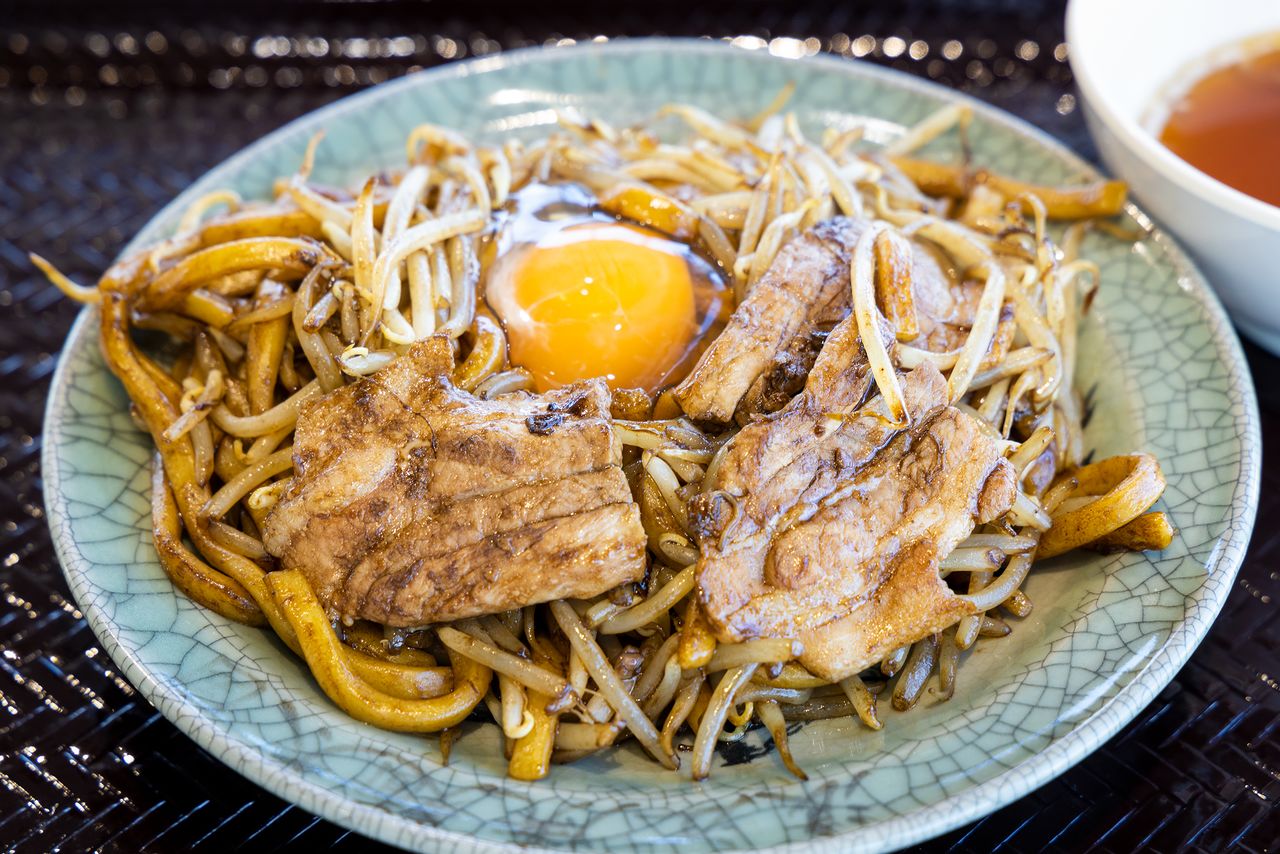 Namie-style yakisoba (¥650) is typically topped with a raw egg. 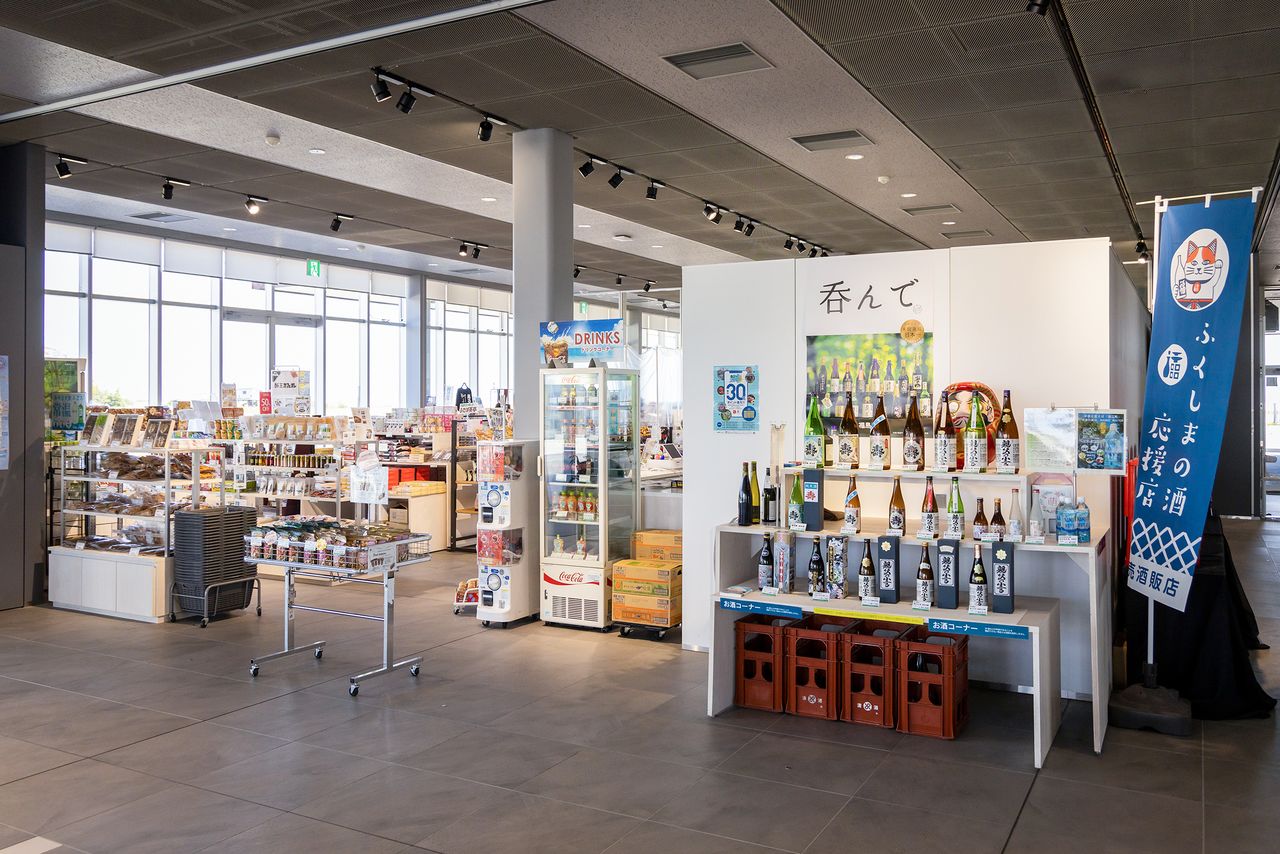