Culture Lifestyle Feb 10, 2012
Ōnishi Isao has been designated a living national treasure for his work in lacquer ware. The painstaking process of applying lacquer and polishing the surface over and over again results in objects of profound, quiet beauty. 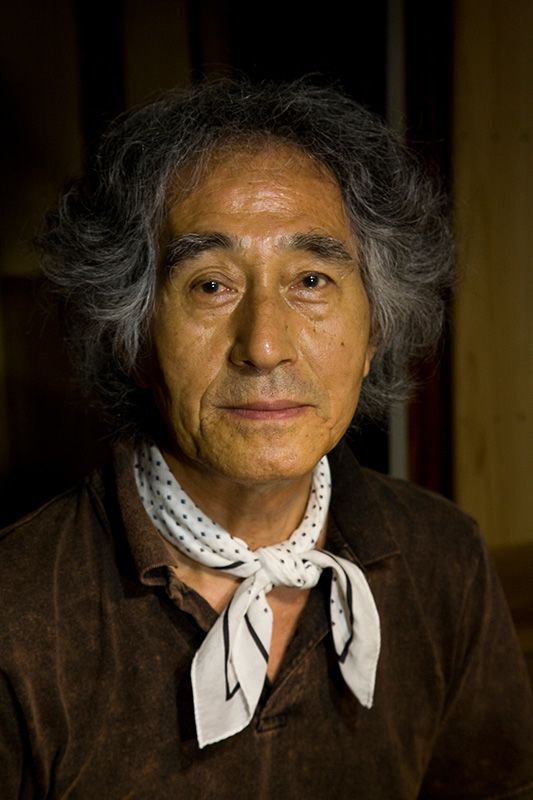 Ōnishi Isao
Born in Fukuoka Prefecture in 1944. Graduated from junior high school and went on to work as a carpenter, automobile mechanic, and electrician, among other jobs. In 1974 he joined the workshop of Akaji Yūsai, designated a living national treasure for his lacquer work; Ōnishi received the same honor in 2002.

Lacquer ware produced in Japan has long been prized around the world. Just as porcelain dishes came to be known as “china,” lacquered dishes and other objects were once referred to simply as “japan,” gaining recognition as one of the key creative forms to come from East Asia.

In 2002 Ōnishi Isao was designated a living national treasure for his work in lacquer ware. This title is awarded by the Agency for Cultural Affairs to individuals who maintain one of Japan’s officially defined “important intangible cultural heritages”—masters of craftsmanship or the performing arts who possess vital techniques and skills in some of the country’s most historically and artistically precious cultural pursuits. Ōnishi won the title for his work in kyūshitsu, a type of lacquer work involving, quite simply, the repeated application of lacquer to the object being crafted.

In most cases, lacquer artisans work with objects and ingredients made by others. But Ōnishi does it all himself. He crafts the wooden utensils, using numerous pieces called magewa, or “bent rings,” to create the basic form of the object that he will use as his canvas. He then mixes his own lacquer and applies the base, intermediate coats, and finish. It can take as long as eight months to produce a single piece.

“I take care at every stage of lacquering and polishing,” says Ōnishi. “It’s the repetition of careful effort that brings out the beauty of a piece of lacquer.”

He remains humble despite his status: “I’m pretty clumsy, so I have to constantly remind myself to take extra care over things. My approach is to avoid excessive ornamentation. I like to create my pieces using nothing more than lacquer and plain, steady craft. It’s the only way to get the job done. Lots of people seem to regard me as some sort of artist since I was named a living national treasure. But nothing could be farther from the truth. I’m a simple lacquer worker. Really, I’m just a down-to-earth craftsman. I don’t give much thought to making my work more efficient or profitable.”

(Continue to the next page for more detailed explanations of each photograph.)

1. The specialist Japanese term kyūshitsu simply means “to apply lacquer.” The top half of the first character, kyū (髹), is made up of two parts. “Hair”—specifically, the women’s hair used in the brushes–is on the top. The character’s bottom half means “to rest,” which is what you let the piece do while it dries. At least, that’s my interpretation of the character.

2. Here I’m using a plane to shape the magewa pieces. I do this by candlelight, which casts the best shadows to show unevenness in the wood. I also find that candlelight is easier on the eyes—this is exacting work, but I can keep at it for hours this way.

3–4. I made this piece in 2010. My aim was to express the deepening color of forest greenery in Japan’s mountains as spring turns into summer. I used black and red to make the green stand out more prominently.

5. Here are a hundred magewa pieces before assembly. It’s the first time for them all to come together—from the little pieces 3 centimeters across to the big 50-centimeter pieces. Temperature and humidity can cause the pieces to expand and contract, so getting them all lined up according to the design is tough work. I always have to make a lot of tiny adjustments to get them to fit together.

6. Once I fit the pieces together, I see the shape of the complete piece for the first time. It’s painstaking work, but I do it this way so the wood has a chance to breathe. That’s what makes it durable enough to last for centuries. It would be possible to create a similar shape on a lathe, but wood expands laterally across the grain over time. A single piece is likely to warp or crack. But a magewa piece with a lacquer finish will remain strong even if you take it to a country with a different climate from Japan. Lathe work might be fine if you want to make a lot of pieces, but for pieces that last it’s got to be magewa.

7–8. The image I had in mind as I crafted this piece was of a charcoal fire glowing red in a black stove. I grew up in an area of the country that produces high-quality anthracite coal. Anthracite isn’t jet black; it has more of a smoky color to it. That’s what I was aiming for here.

9. Here I’m applying strips of cloth to lacquered magewa. It’s important to affix the cloth with its weave at an angle to the grain of the wood. This allows the wood to expand and contract ever so slightly. If the weave of the cloth is aligned with the grain, the wood just keeps expanding, and then you’ve got trouble when it contracts again. The diagonal alignment allows for a bit of room to flex but keeps the overall structure strong. This technique has a long history: it was used in some of the treasures in the Shōsōin imperial storehouse in Nara.

10. After I put the cloth on the piece, it’s time for more coats of lacquer. When I lacquer magewa pieces I mount them on a cross-shaped frame that doubles as a handle. This lets me spin the pieces as I apply the coats and, more importantly, avoids any contact with the freshly lacquered spots.

11. I polish my pieces with charcoal. I understand most people nowadays use sandpaper for this, but I insist on charcoal made from tung oil trees grown in Shizuoka Prefecture. I apply the lacquer, let the coat dry, and then polish the surface with charcoal. Doing this over and over creates the beautiful lacquered finish.

12–13. I did this piece in 2003. It’s meant to evoke the starry night sky. While I was making it, I kept asking myself just what color the black is that you see in the dead of night. The piece is raised on a base, which I also made from multiple layers of magewa. It’s a kurodame piece, which means it has a black (kuro) base and tame coats of clear, refined lacquer above. The black shade that appears when the piece is new fades gradually over time, creating an indescribably beautiful sheen.

14. Lacquer is the sap of the lacquer tree. Specialists cut the bark of the trees and collect the fluid that seeps out. It’s precious stuff: you can only get around 150 grams from one adult tree. Nowadays 99% of the lacquer used in Japan comes from China, but I use lacquer harvested in the town of Daigo in Ibaraki Prefecture. A friend of mine there collects the raw lacquer sap and sends it straight to me. I do my own refining and I add pigments to create the colors I want. The lacquer in this photo was harvested at the height of the summer heat; it’s ideal for use in top coats.

15. This is a deep green lacquer that I’m in the process of filtering. I filter it through washi, traditional Japanese paper, to remove impurities before I use it.

16–17. This is a piece I did in 2010 as an expression of Orion, the winter constellation. As I worked on it I thought about the times when I used to stare up at the night sky as a young man. The outer rim features a new crescent moon, which I created by raising the magewa pieces along the moon’s curve slightly higher than the surrounding pieces.

18. The final stage in creating a piece is to apply the top coats. Here the key is to apply the lacquer quickly, all in one go. The last thing you want is for dust to have time to fall on the piece and mar it at this stage. Actually, the city of Chikusei, Ibaraki, where I do my work, isn’t particularly suited to lacquer work. The best places are those with high humidity all year round, like Wajima in Ishikawa Prefecture, Tsugaru in Aomori Prefecture, and Aizu in Fukushima Prefecture. There you’ve got good humidity and less dust to deal with.

19. My brushes are made of women’s hair held between pieces of wood. Long ago the best hair was said to come from ama, the woman divers who harvest pearls and shellfish; their hair was supposedly stronger at the core.

20–21. I chose an elliptical shape for this 2008 piece in an attempt to express terraced rice paddies. It’s difficult to create oval magewa, and I had to make fine adjustments any number of times before I achieved this. I envision this as representing autumn, when the crops are ready for harvest.

22. Here I’m applying a top coat to a new piece. I got a late start in this field at the age of 30, so I’m not particularly skillful when it comes to lacquer application. There are many craftsmen out there who are better than me. Since I can’t rely on dexterity, I make repeated effort—the lacquering and polishing—the core of my craft. That’s all there is to my method: take plenty of time and coax out the natural beauty of the lacquer.

23. This is my tool bench. Here you can see the miniature planes and small blades I use to adjust and shape the magewa in my pieces. Making the magewa fit together perfectly requires a lot of fine tuning, so I need to have a range of these tools in all different sizes.

24. Here’s my work room. On the right you can see the white doors of the urushiburo, or “lacquer bath.” This is an enclosed space designed to keep dust out and maintain a proper temperature and level of humidity. Lacquer will only dry if the air is somewhat humid. The ideal conditions are around 75% humidity and a temperature of 20–25ºC. Seven or eight hours in this bath will bring out the fine sheen of a coat of lacquer.

25. I made this piece in 1990. The eight holes around the edge signify the seven stars of the Big Dipper constellation and the person looking up at them. This is another tame piece, with clear coats of raw lacquer applied above the colored base. More than 20 years have passed since I made it, and the red hue has only gotten more captivating during that time. It’s fair to say that I’m just the co-creator of this color, along with time itself.

26. After I spend half a year or longer creating a piece, I sign my name to it to mark its completion. It’s a mark that shows I am taking responsibility for the vessel you see. 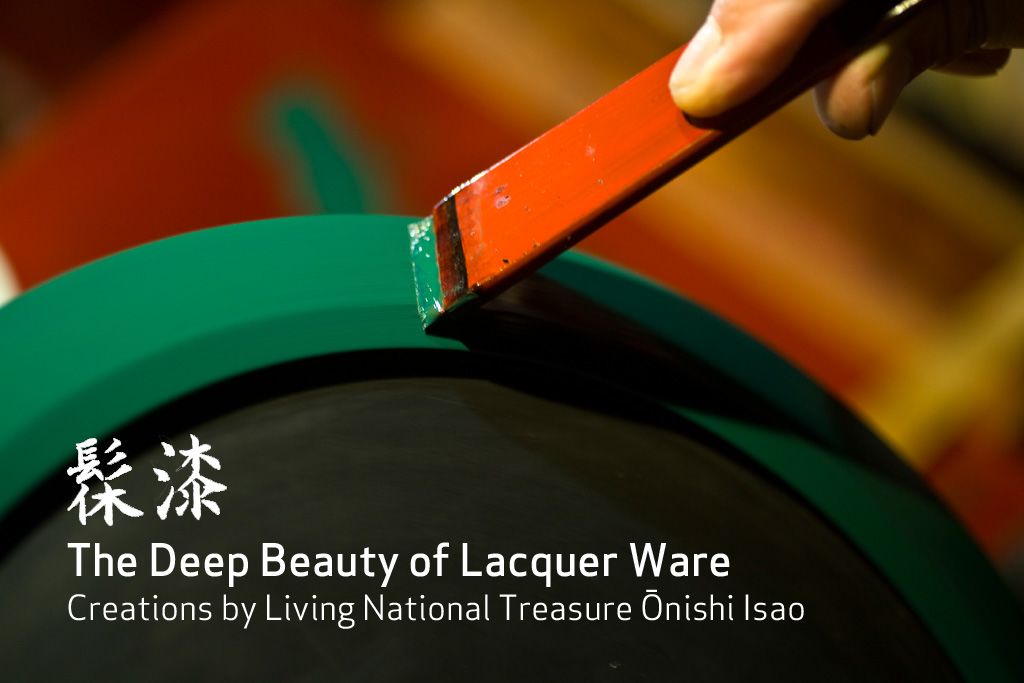 1. One of the many brushes used to apply lacquer. 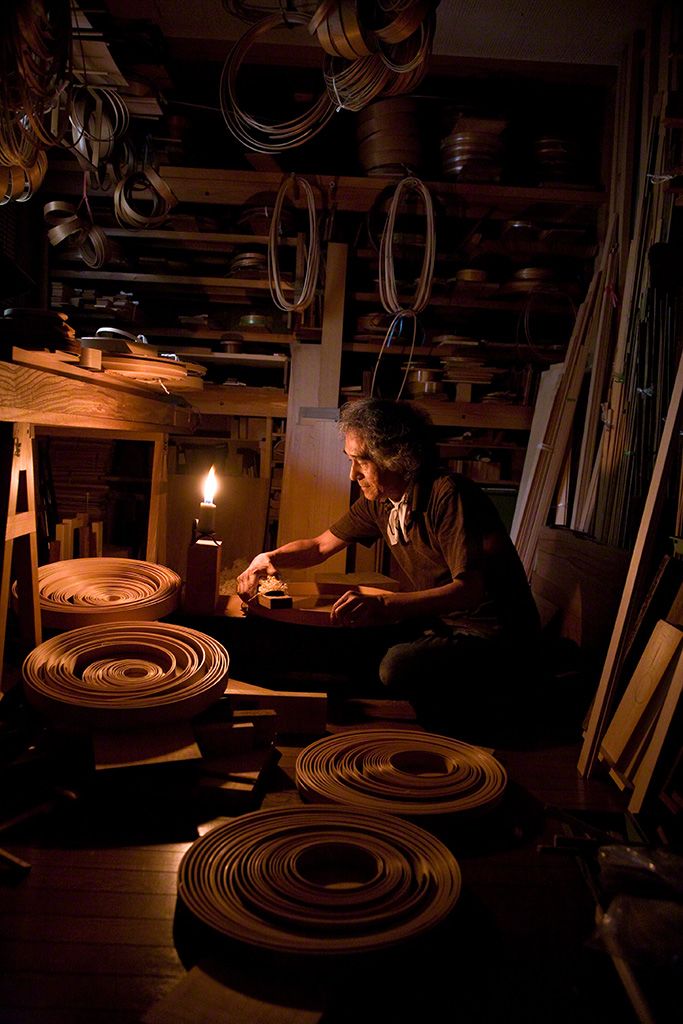 2. Ōnishi Isao in his workshop. 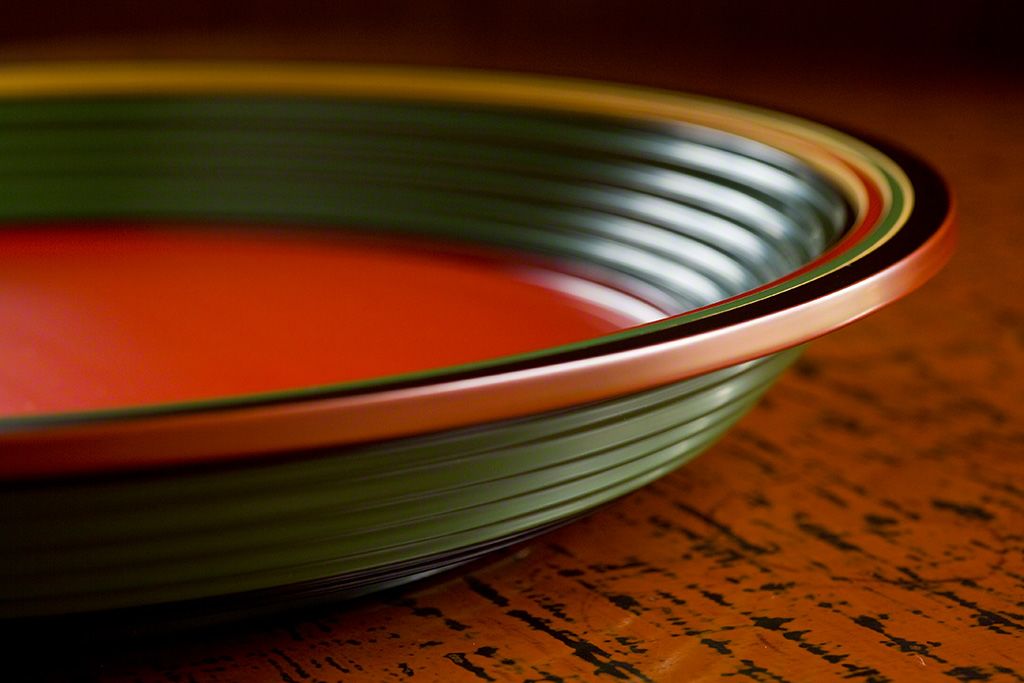 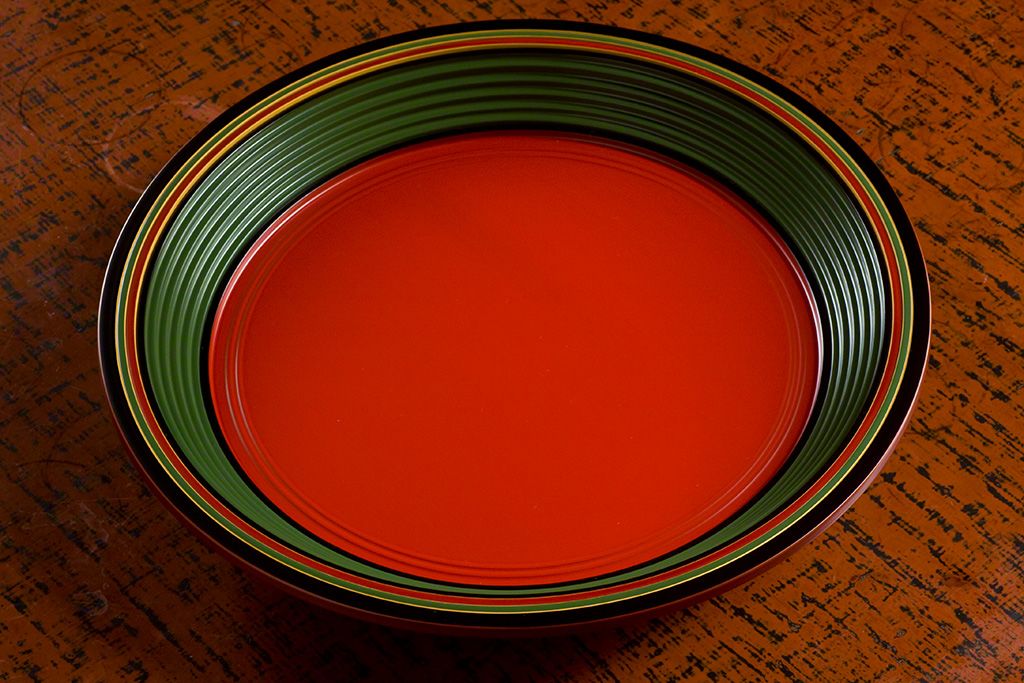 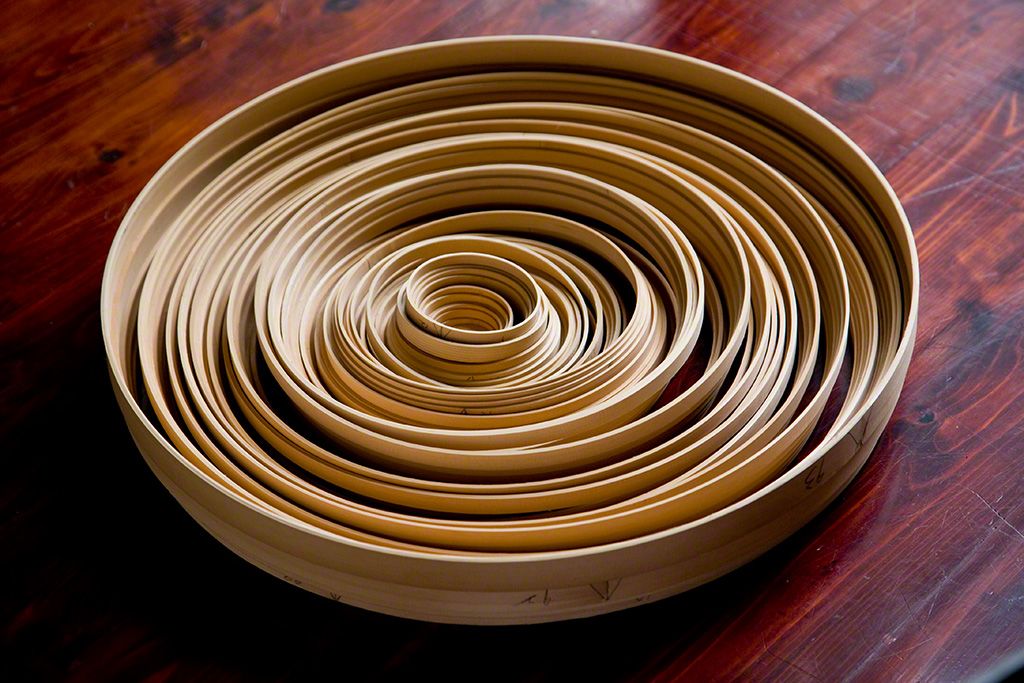 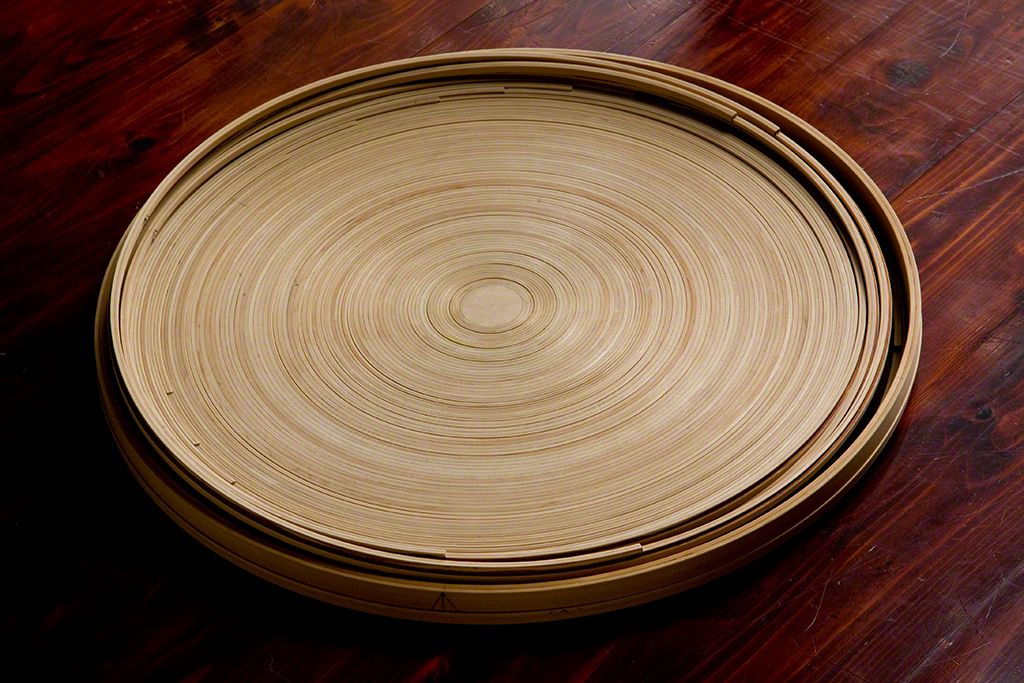 6. Ōnishi assembles the rings into the shape of the dish. 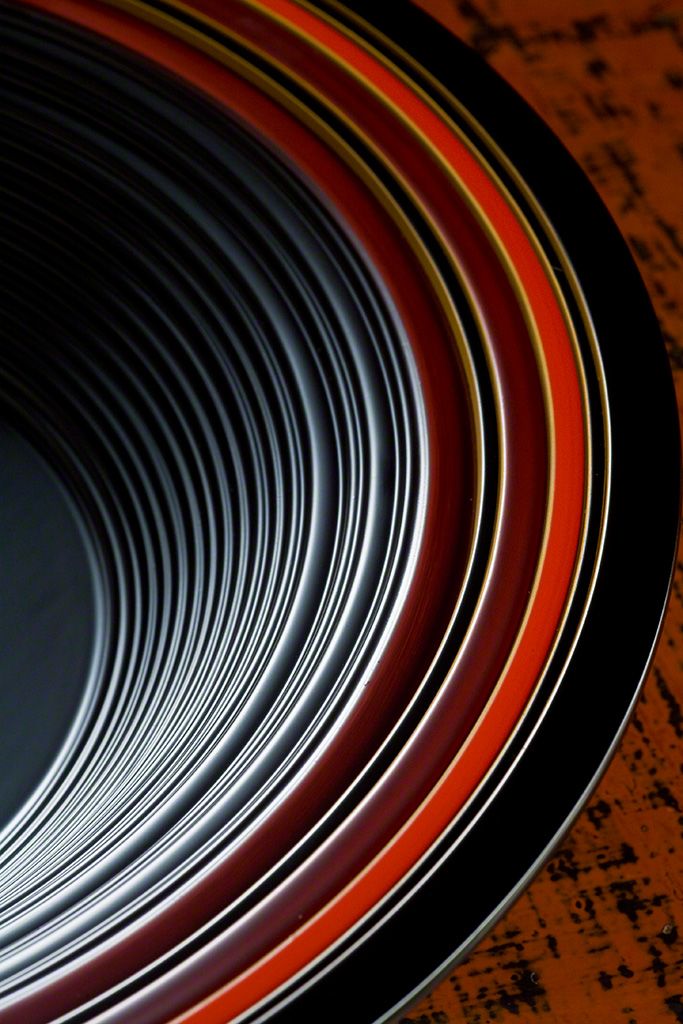 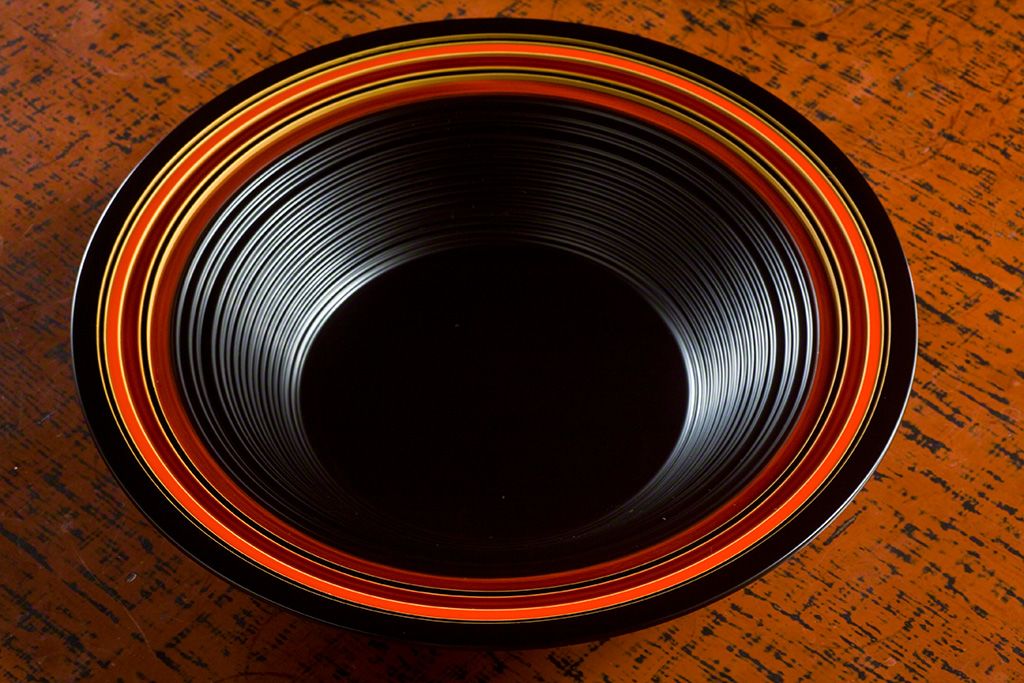 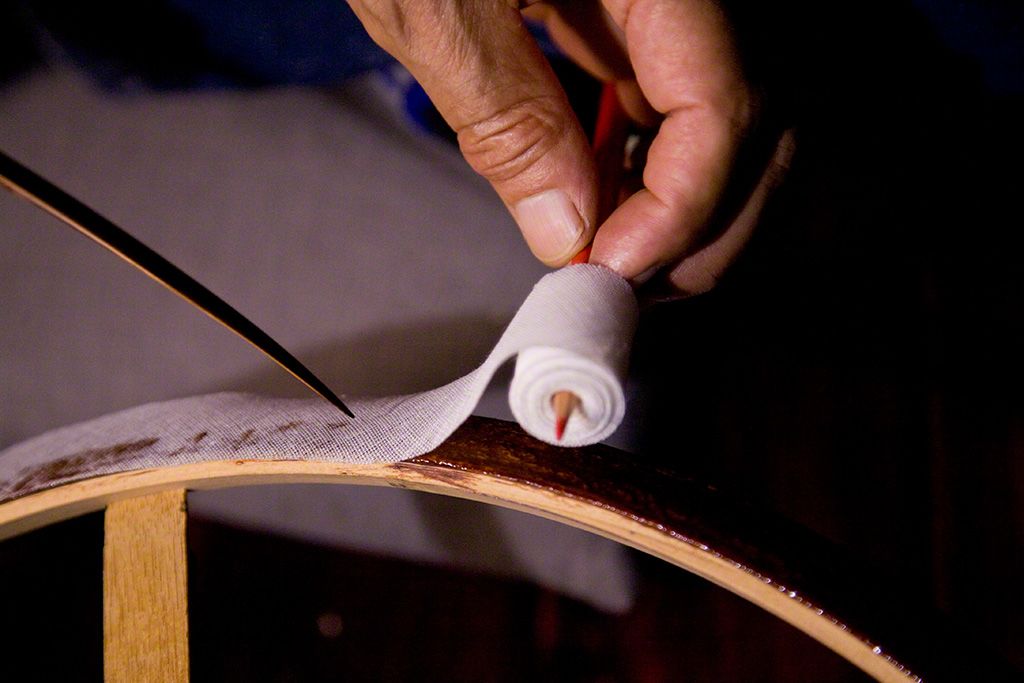 9. Applying cloth to prevent flaws when the wood expands or shrinks. 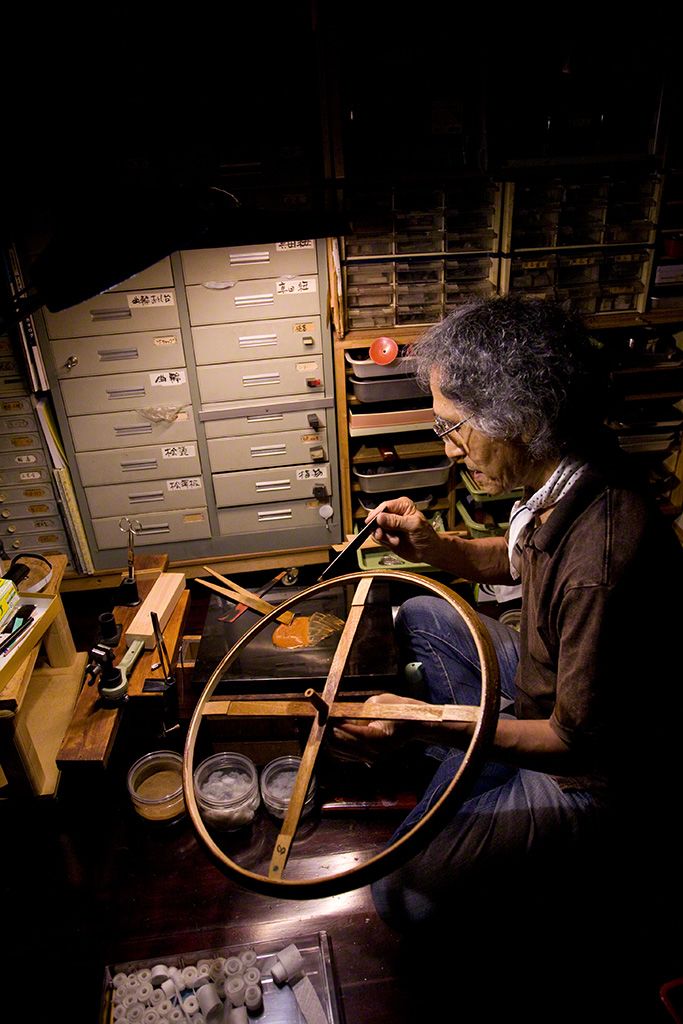 10. Ōnishi applies a coat of lacquer after affixing cloth to the work. 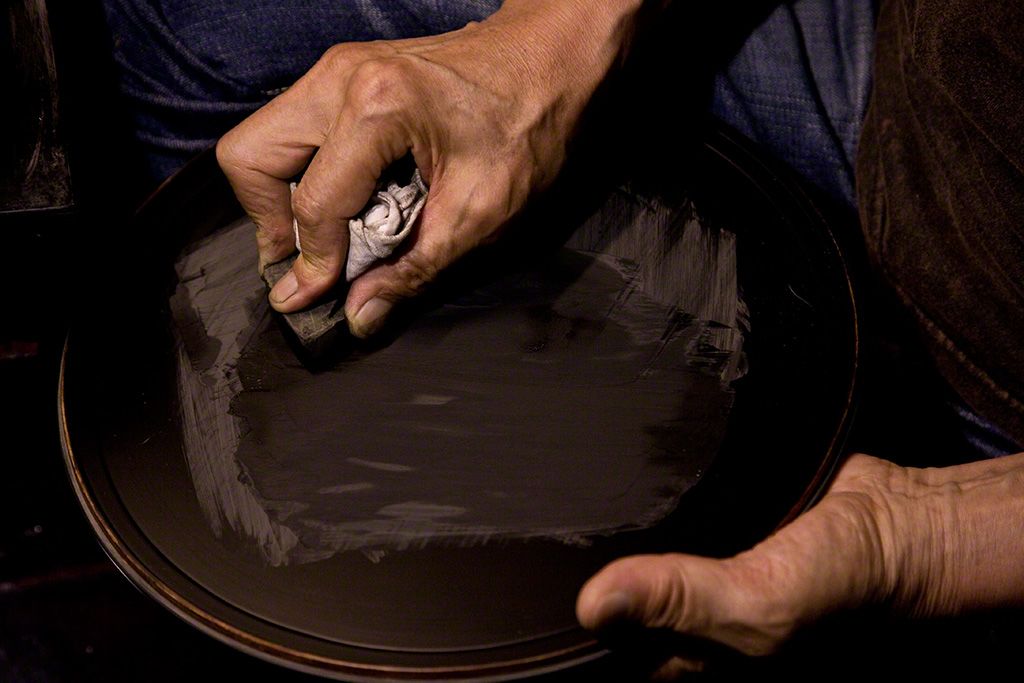 11. Polishing the piece with charcoal. 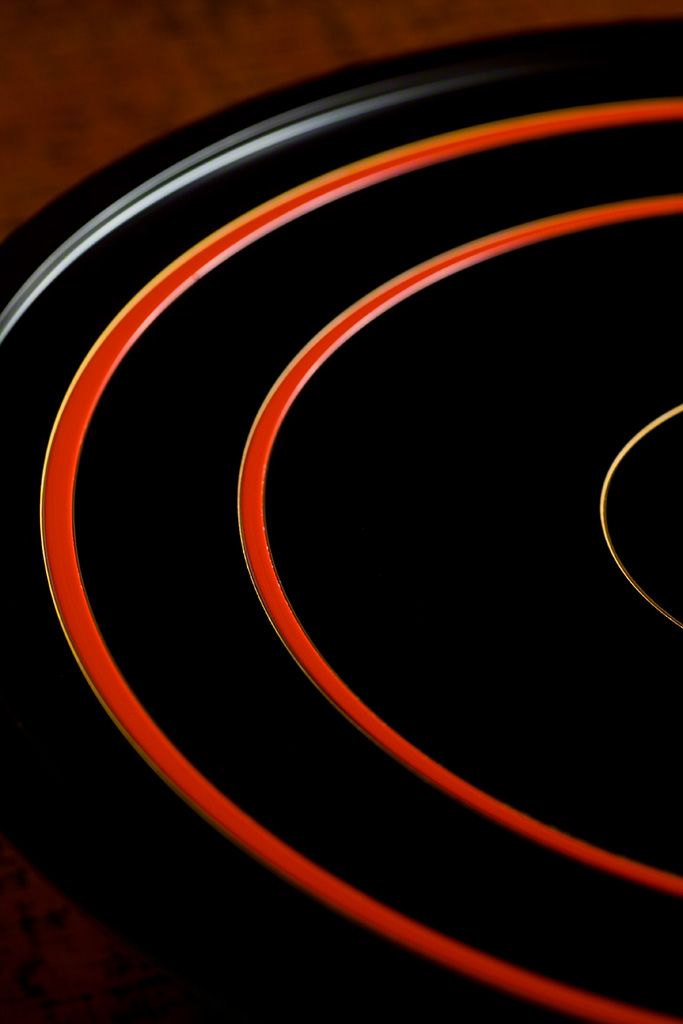 12. A 2003 Ōnishi “kurodame” creation, with clear coats applied over a colored base. 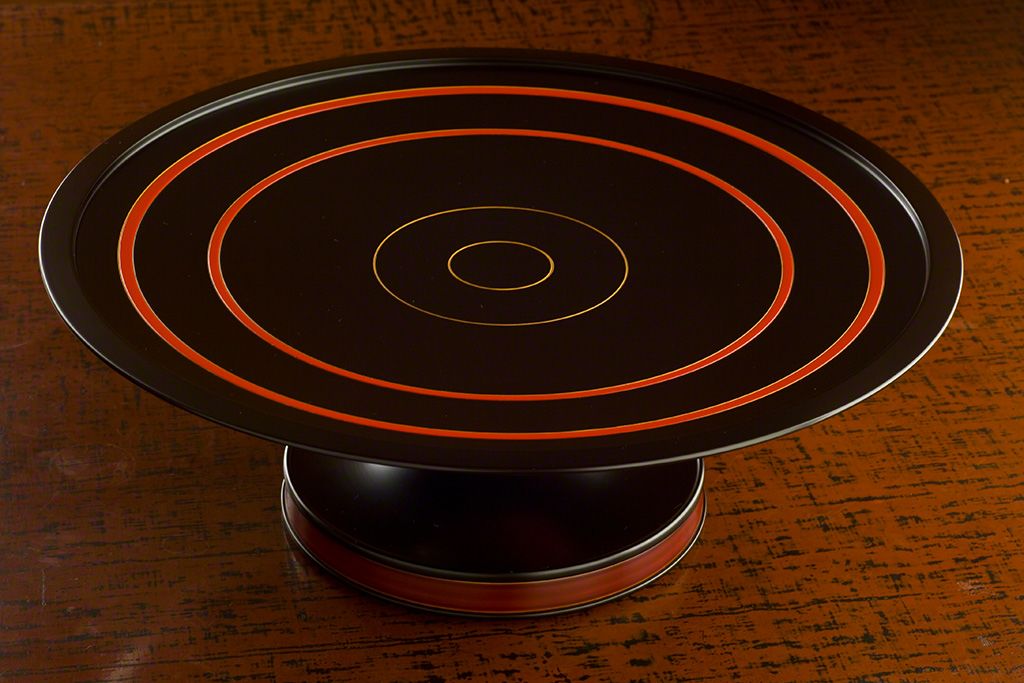 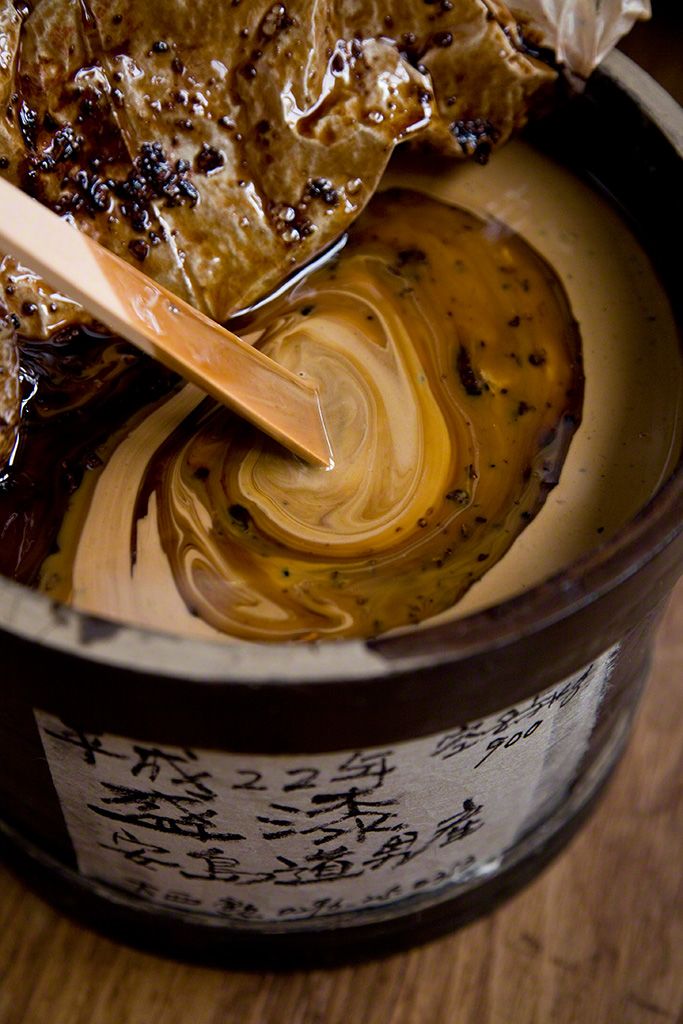 14. Raw lacquer, obtained from the sap of the lacquer tree. 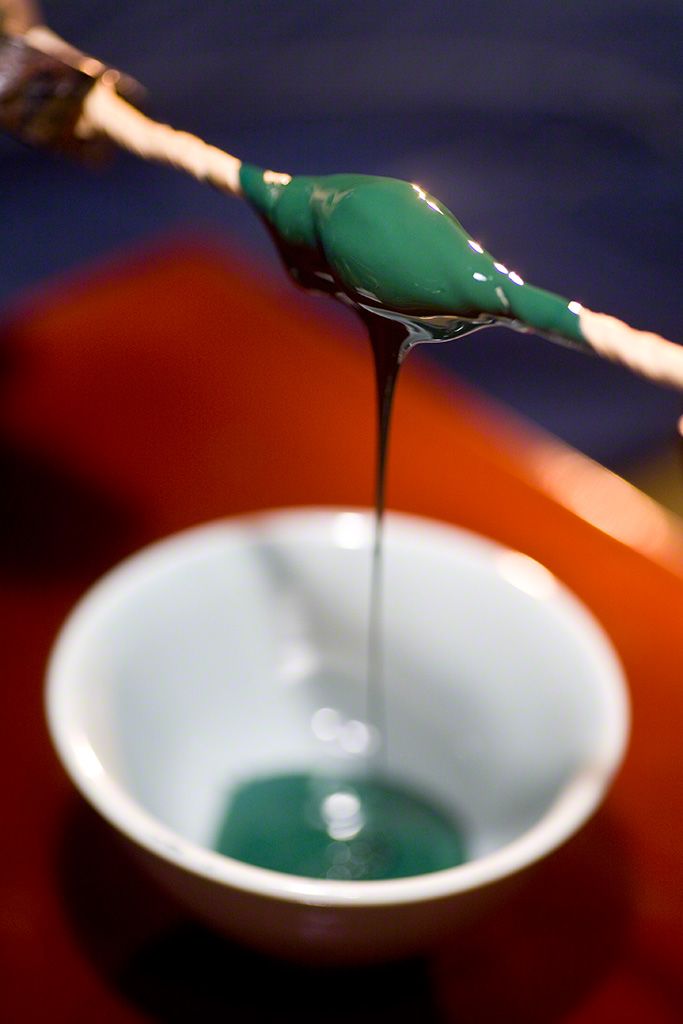 15. Ōnishi filters and colors his own lacquer. 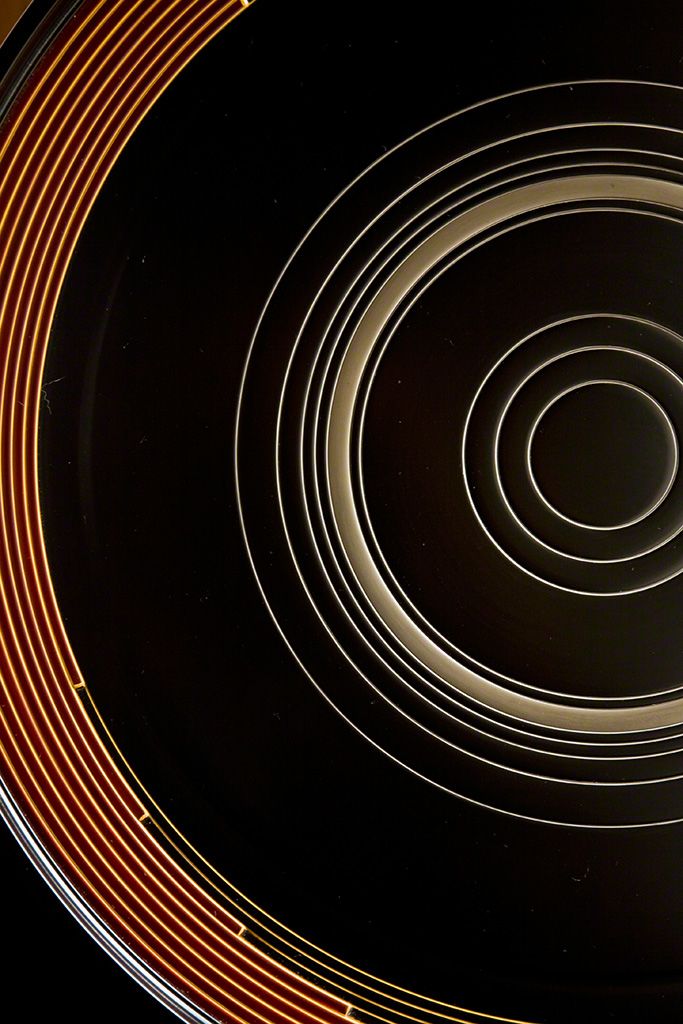 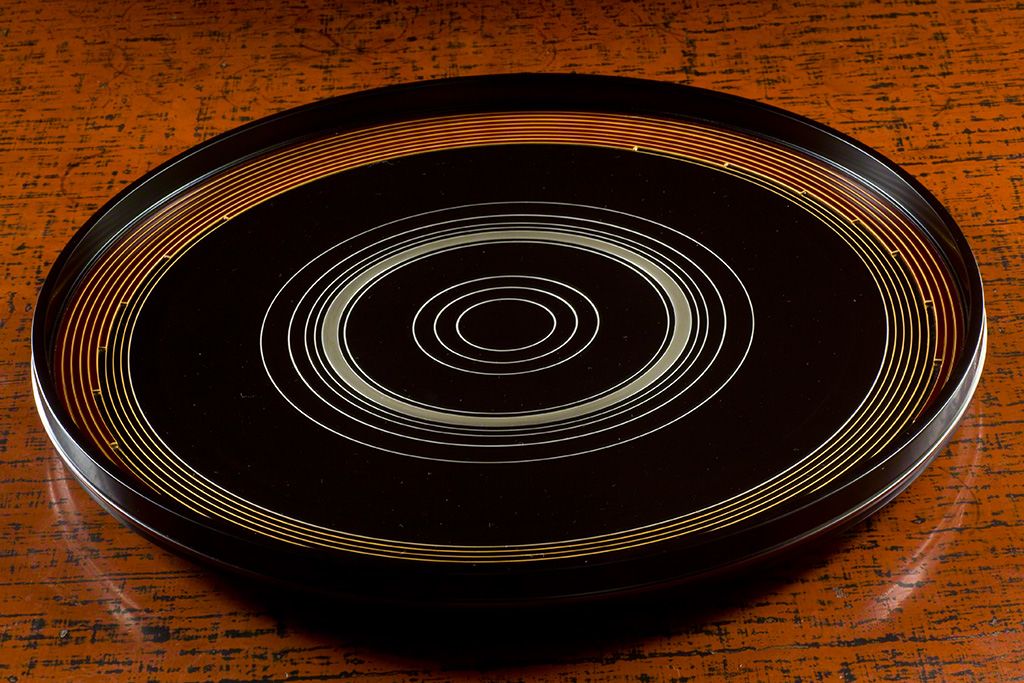 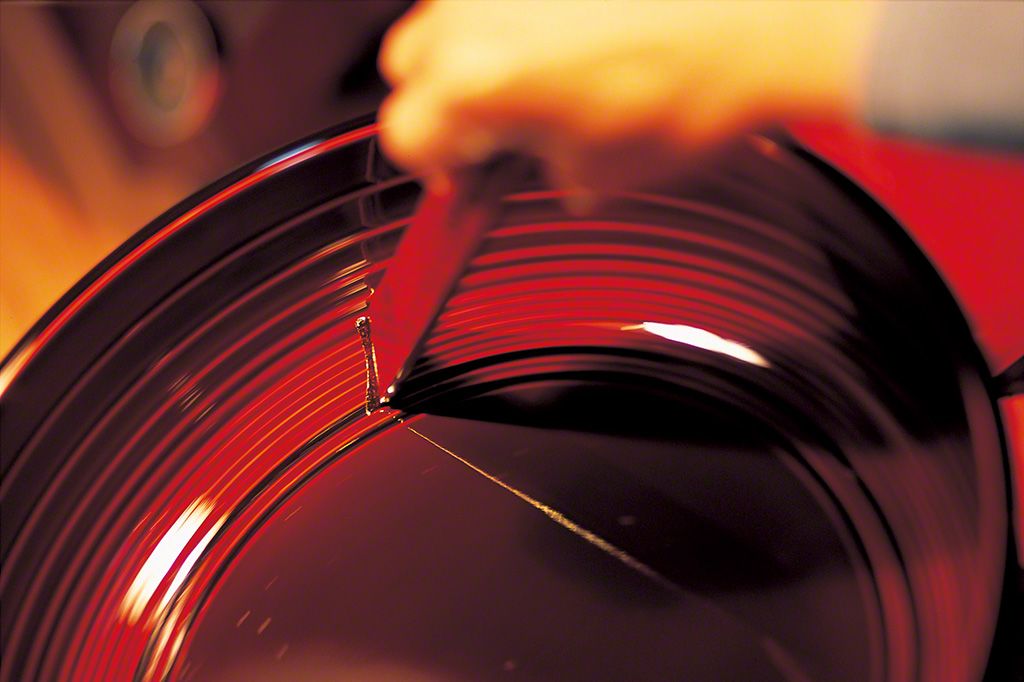 18. The top coats are the final stage of creation. 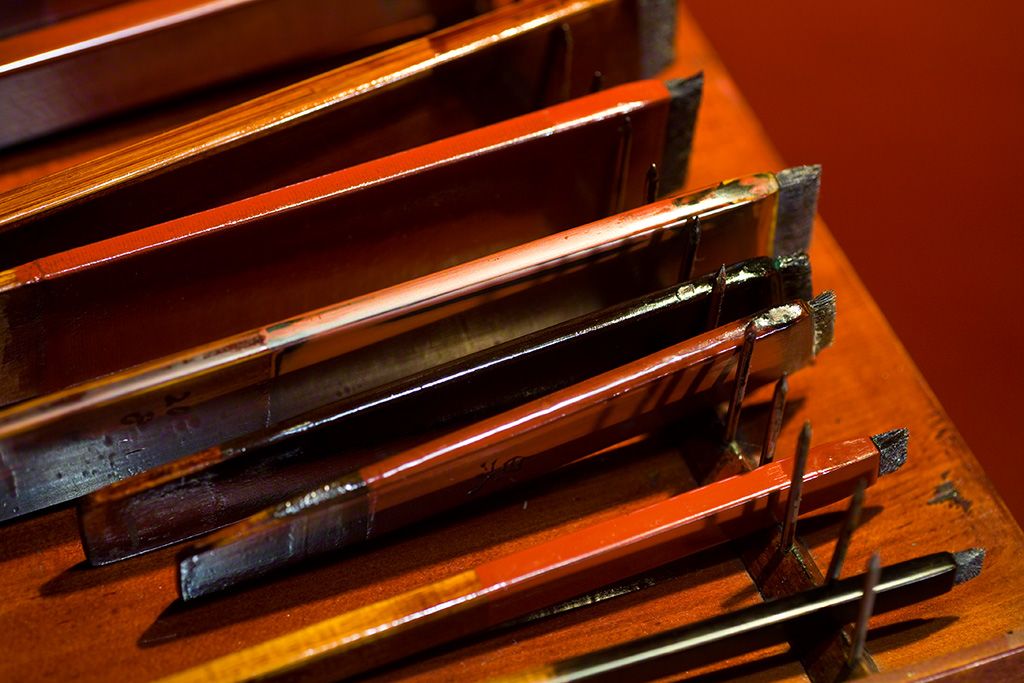 19. A selection of the brushes he uses. 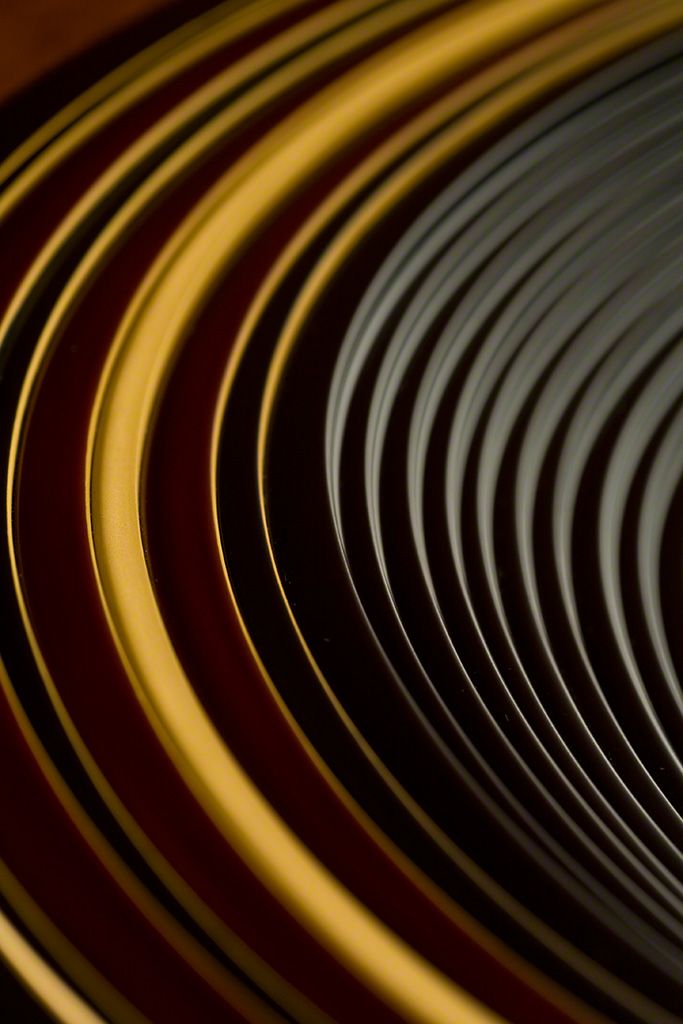 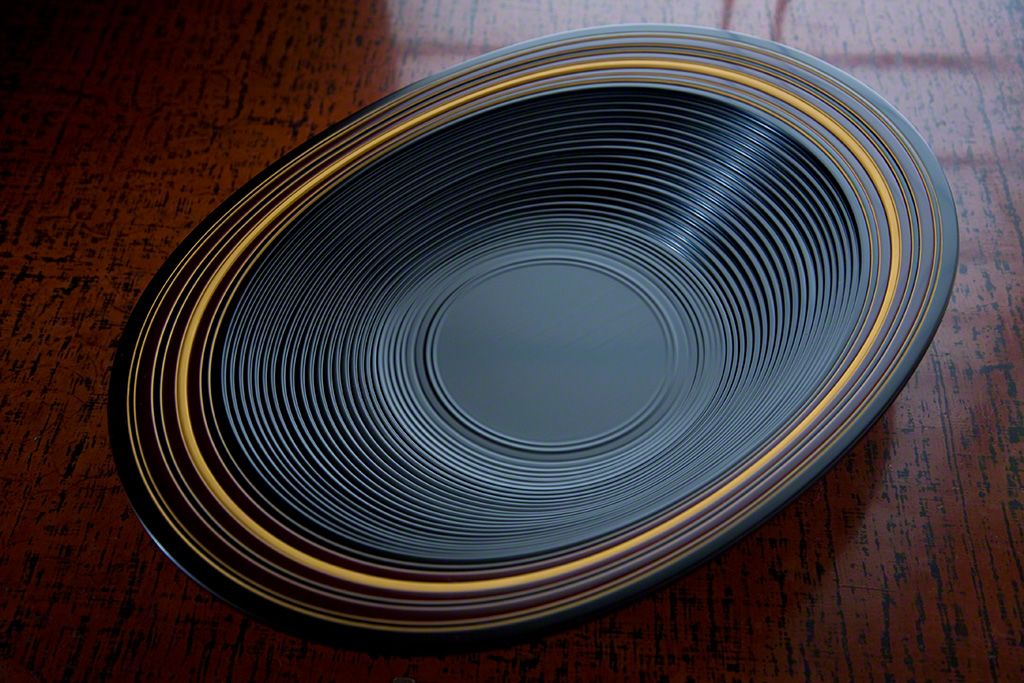 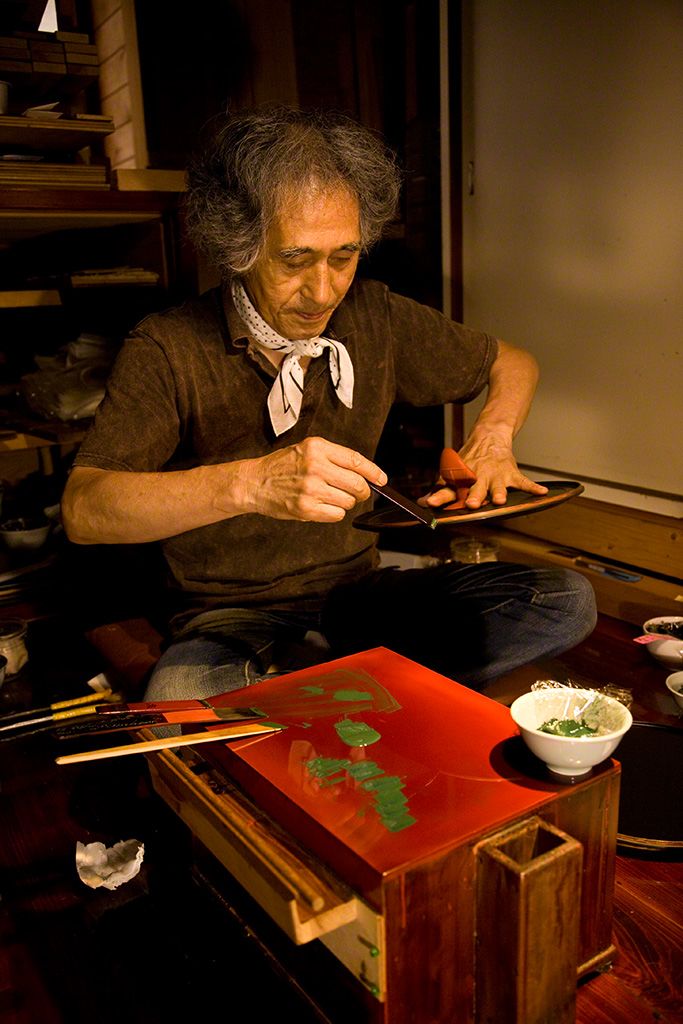 22. Ōnishi applies a top coat as a piece nears completion. 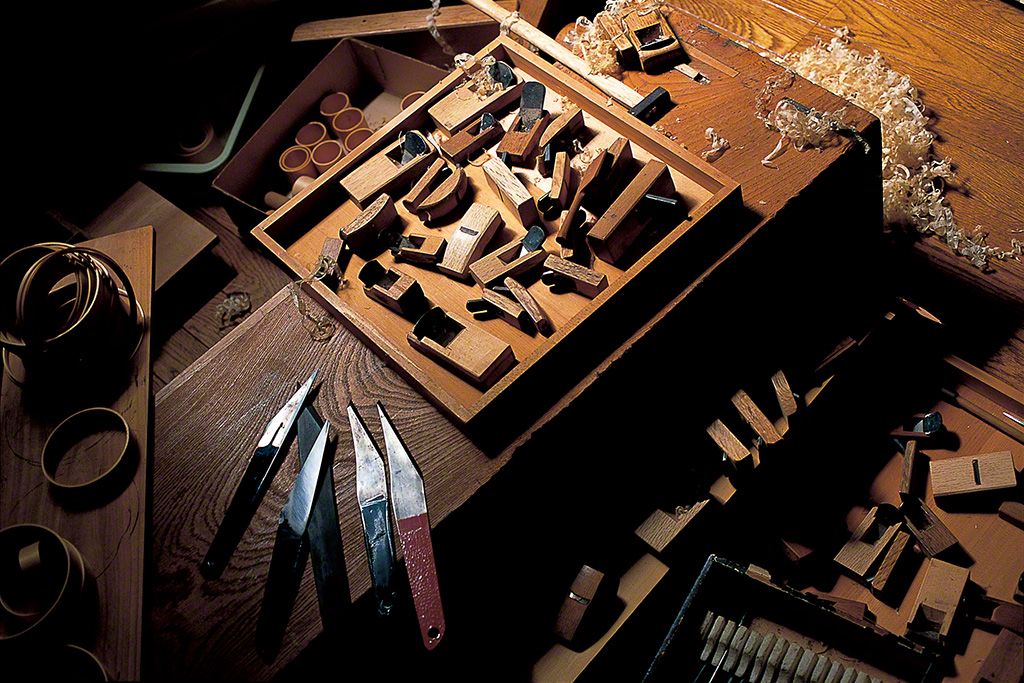 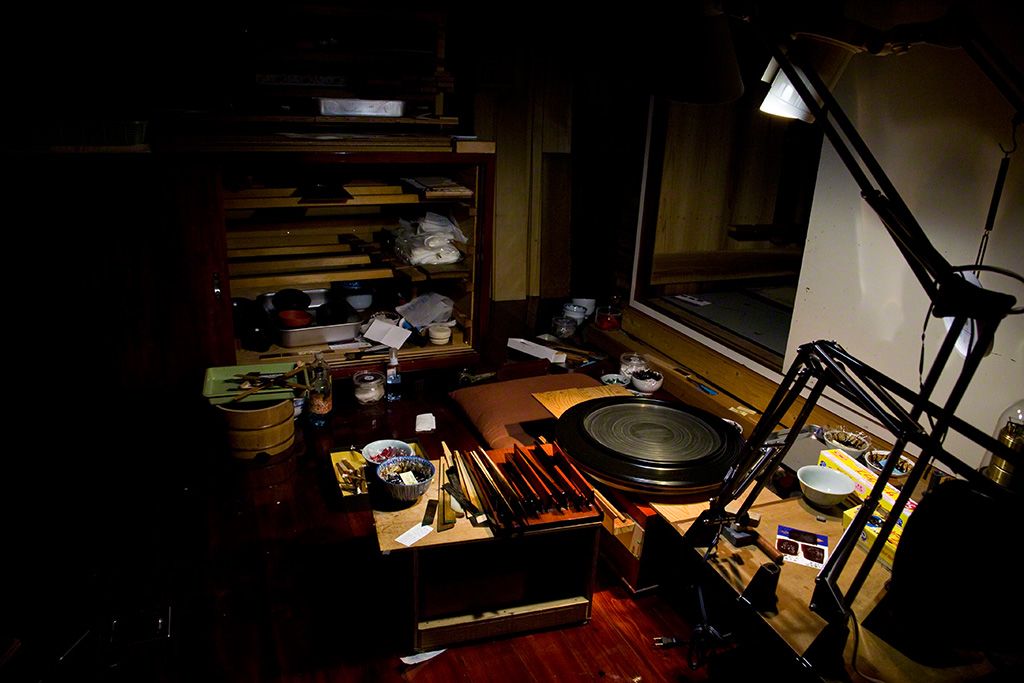 24. A view of the lacquering space. 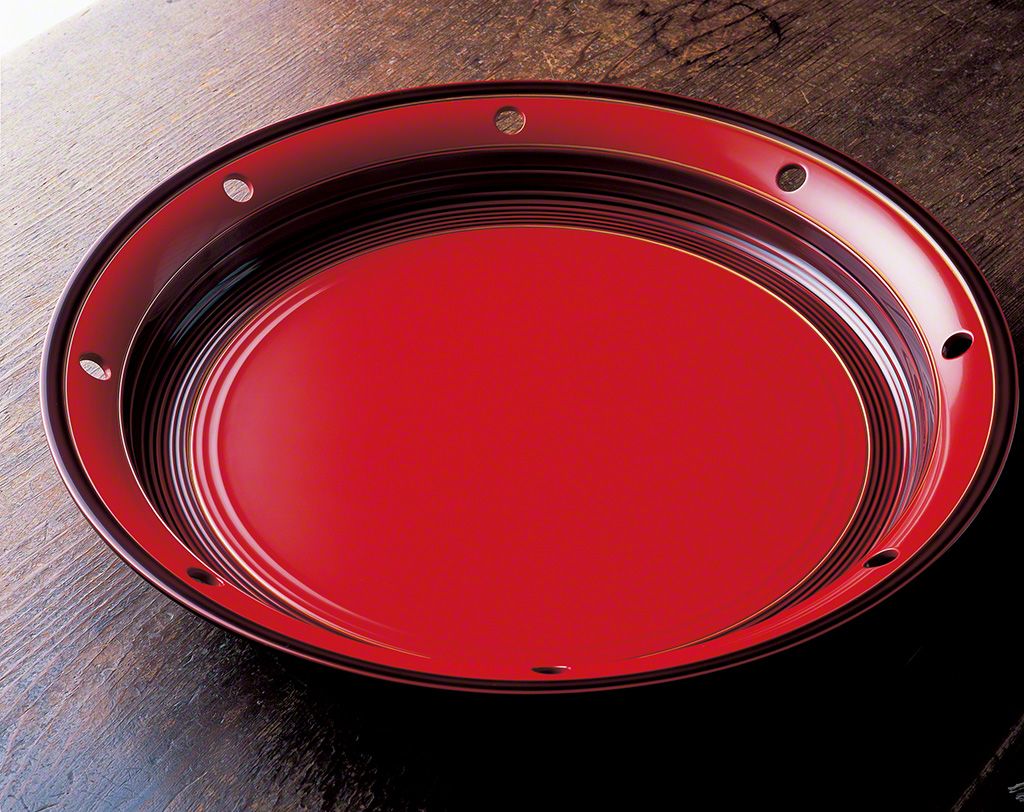 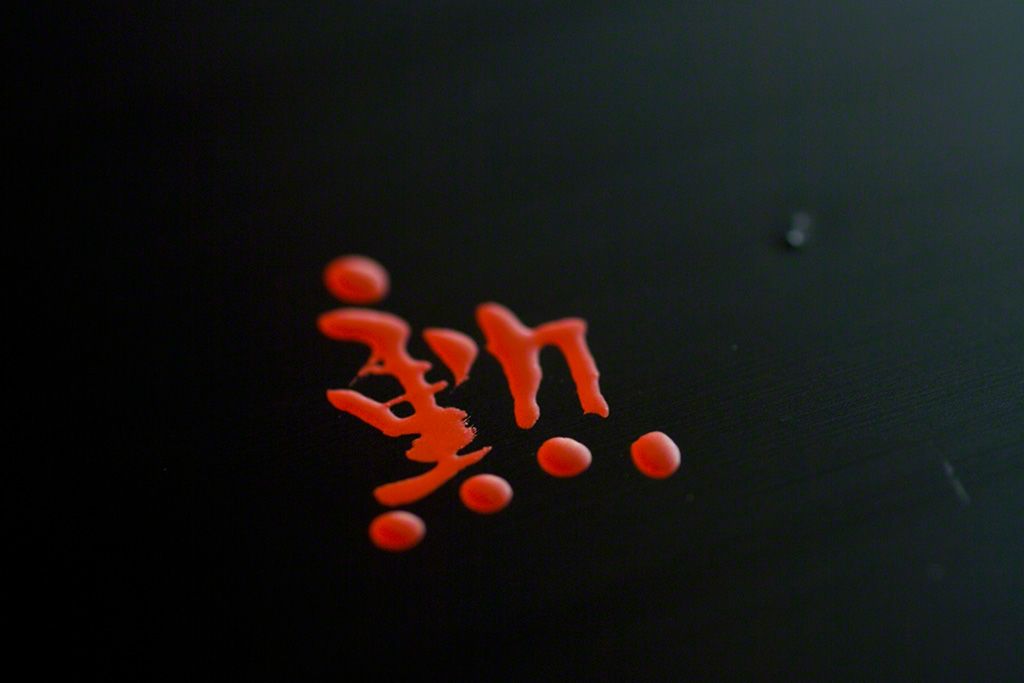 26. Last, each piece is signed with the character “Isao.”