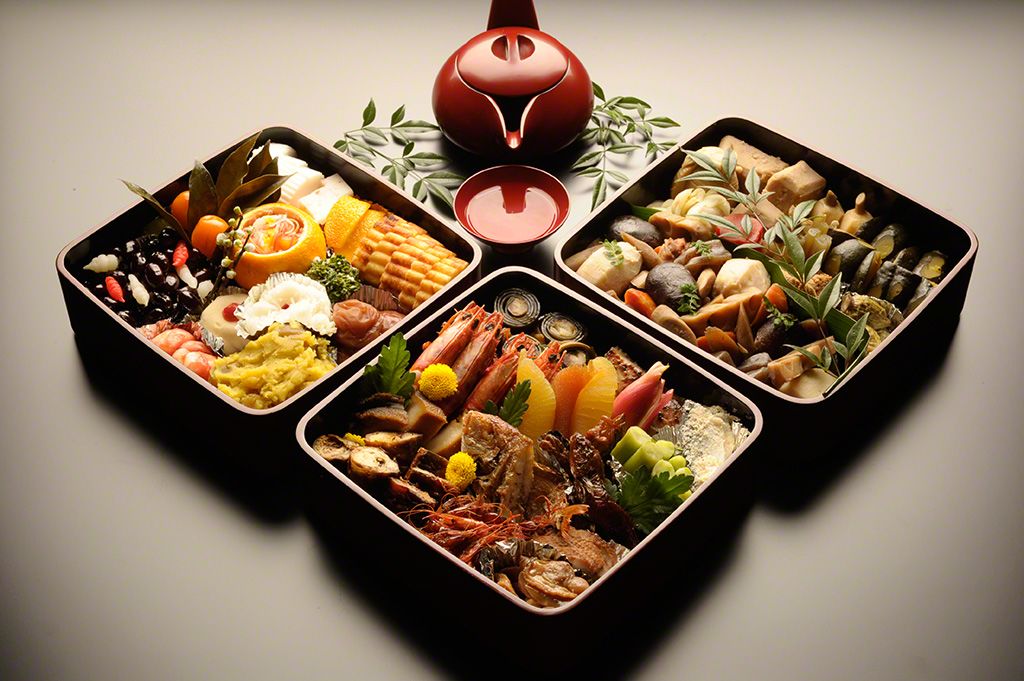 Culture Lifestyle Jan 3, 2012
Osechi ryōri cuisine is one of the highlights of traditional Japanese New Year celebrations. Every December, Kondō Fumio, proprietor of a Michelin-starred restaurant in Tokyo, spends 20 days preparing an elaborate osechi banquet. On New Year’s Eve, he brings it to the home of his late mentor, the novelist and gourmet Ikenami Shōtarō.

A Year’s Worth of Good Wishes

The New Year holidays are one of the most important festivals in the Japanese calendar. An essential part of the celebration is osechi ryōri, the traditional New Year’s cuisine. Osechi ryōri consists of several dozen elaborate dishes prepared in advance and served cold in layered lacquer boxes called jūbako. Many of these foods are imbued with a special seasonal significance and are supposed to bring good health and fortune in the year to come. Many of Japan’s finest traditional restaurants prepare elaborate osechi ryōri feasts that people order in advance and enjoy with their families over the holiday period.

The Ginza Chef and the Novelist: Three Decades of Osechi Ryōri 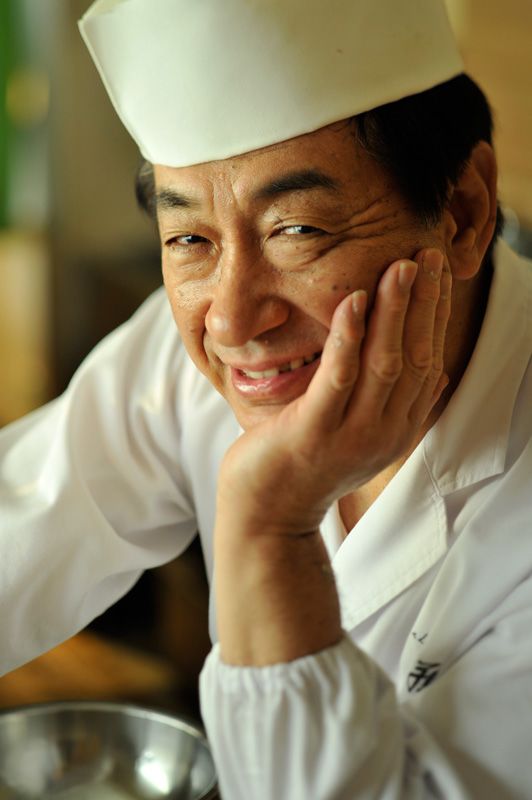 Kondō Fumio
Head chef and proprietor of the Tempura Kondō restaurant in Ginza, Tokyo. Born in Tokyo in 1947. After graduating from high school, started work at the Hilltop Hotel in Tokyo, where he served his apprenticeship at the Yamanoue Tempura and Japanese Cuisine restaurant. In 1970 he became head chef at the young age of 23. He left to open Tempura Kondō in 1991. He published several books on food and culinary culture co-written with Ikenami Shōtarō, one of Japan’s best-loved authors of historical fiction.

Combining dozens of dishes representing all the main ways of preparing food, osechi ryōri encapsulates the essence of Japanese cuisine. Many chefs prepare special osechi ryōri courses as a way of expressing their gratitude to the customers and others who have supported them during the year. A lovingly prepared osechi feast is a delight for all the senses.

Kondō Fumio, who worked at the Yamanoue Tempura and Japanese Cuisine restaurant before opening his own establishment in Ginza, continues to prepare osechi ryōri for one person in particular every year: Ikenami Shōtarō, one of Japan’s best-known writers of historical fiction as well as a famous gourmet and film critic. Although Ikenami passed away in 1990, Kondō continues to prepare the special food every year, delivering it to Ikenami’s residence in person every New Year’s Eve.

Kondō says: “I owe everything to Ikenami-sensei. If not for him, I wouldn’t be where I am as a chef today. I can’t tell you how much advice and support he gave me. As long as I’m a chef, I will do my best to make him proud. As an expression of gratitude, I deliver osechi ryōri to his house every year on New Year’s Eve. I regard it as a duty.”

Kondō starts preparing the osechi ryōri around December 10 every year. By the time Kondō packs the last of almost 40 dishes into the layered lacquered boxes for delivery, it is dawn on New Year’s Eve. He takes the food directly to Ikenami’s home, where he offers incense and talks with the late author’s wife before returning home for New Year. For Kondō, this final assignment of the year is a labor of love and part of the ritual bringing the year to its end.

In front of Ikenami’s house, with osechi ryōri in hand.

“The uniform I wear in the restaurant every day carries the Kondō name over the breast, written in Ikenami-sensei’s calligraphy—it gives me the inspiration to keep working from morning till night every day.”

On January 3, Kondō visits Ikenami’s grave to report on the previous year’s events.

Kondō continues to hone his skills. The aim is always the same: to offer a level of service and food that would make Ikenami proud. For Kondō, the annual ritual of preparing a special course of osechi ryōri for his mentor is a valuable way of keeping a check on his own skills as a chef. 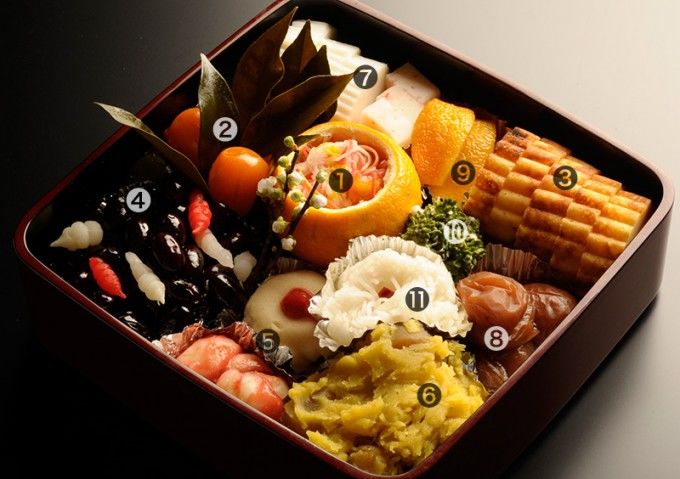 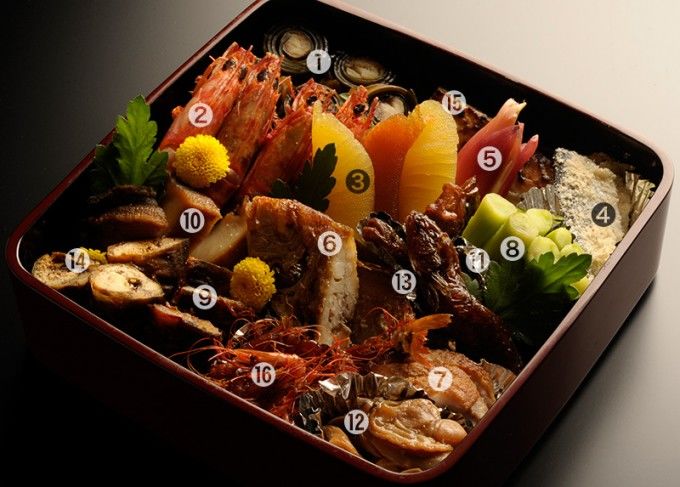 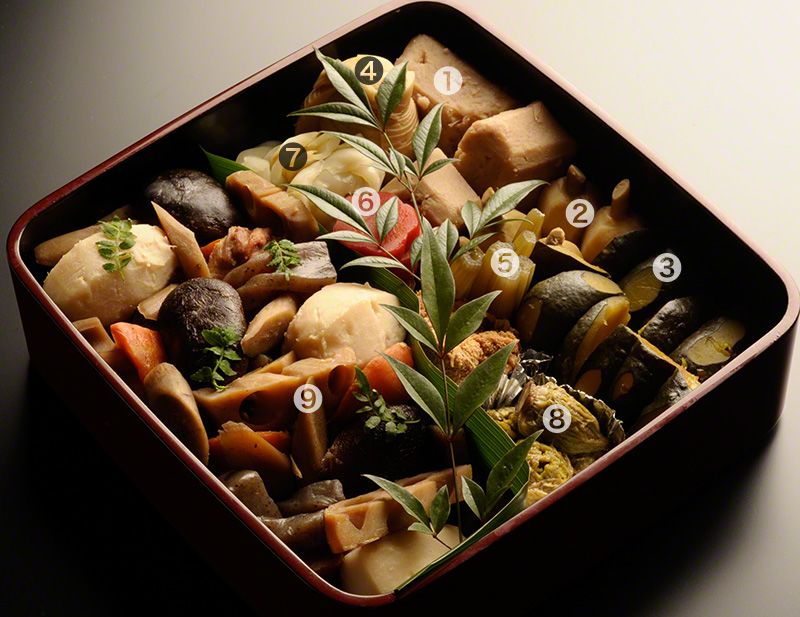 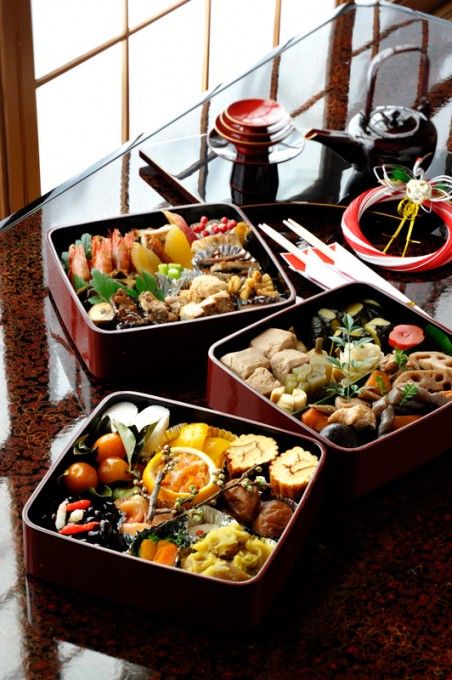 The mouth-watering colors of osechi ryōri brighten Japanese tables over the New Year holidays. “An osechi dinner contains several dozen courses,” says Kondō Fumio. “If someone singles one of them out for praise, the person who prepared the meal might take that to mean that the other dishes weren’t so great. Ikenami-sensei never made that mistake. He would always just say, ‘Thank you. That was delicious,’ and leave it at that.” 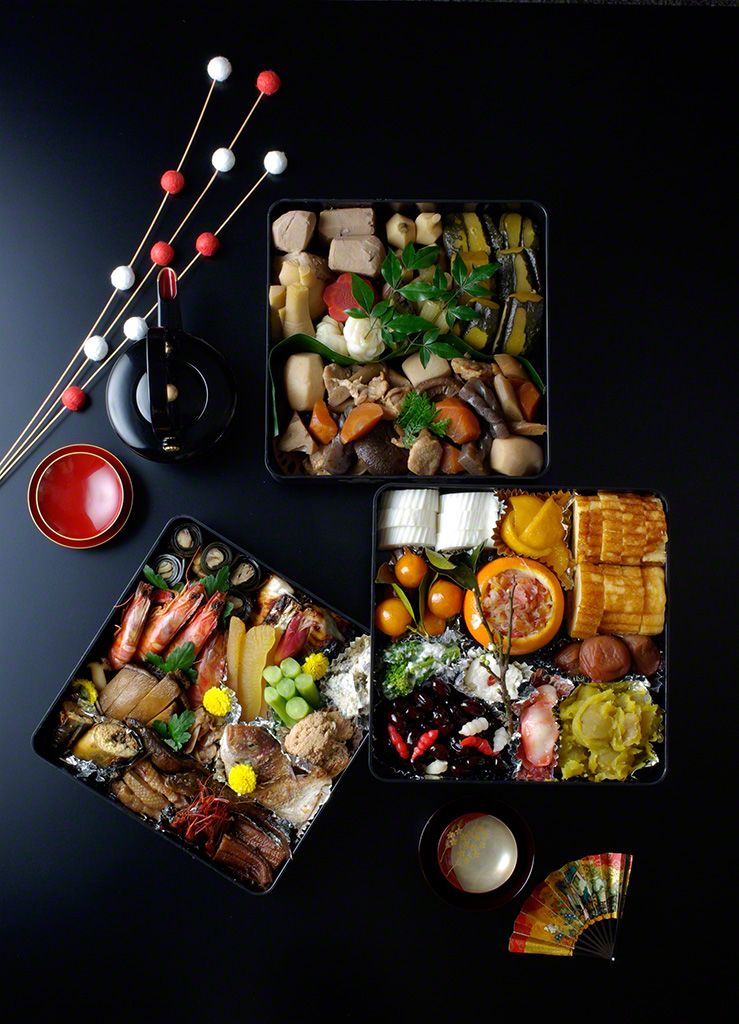 “Osechi ryōri” as prepared at the Tempura Kondō restaurant. 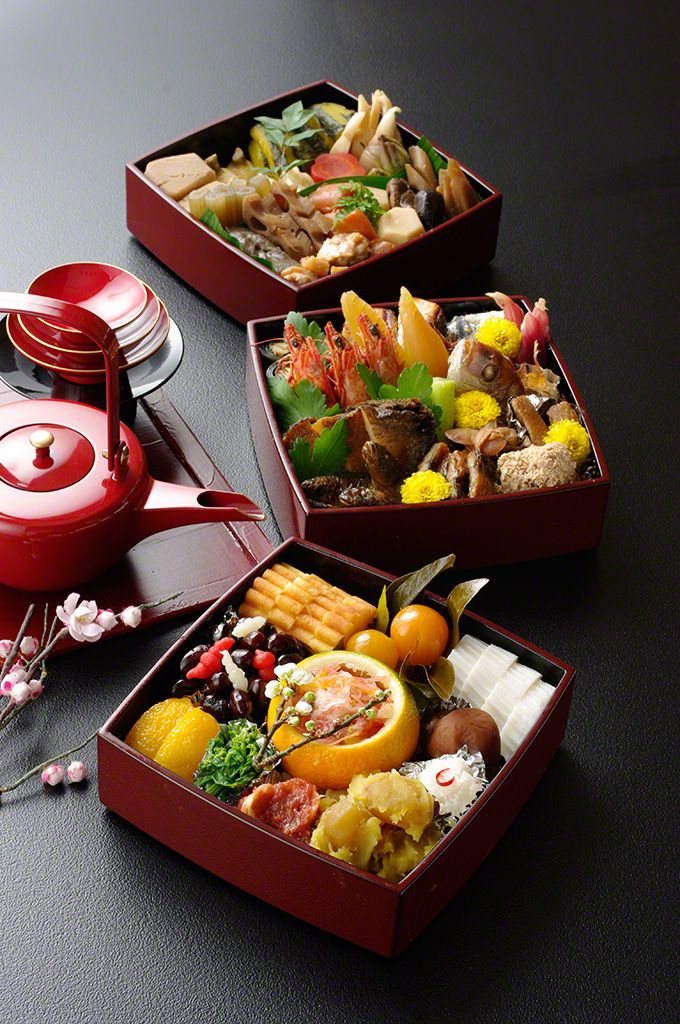 The same delicious flavors are delivered to the Ikenami household every New Year’s Eve. 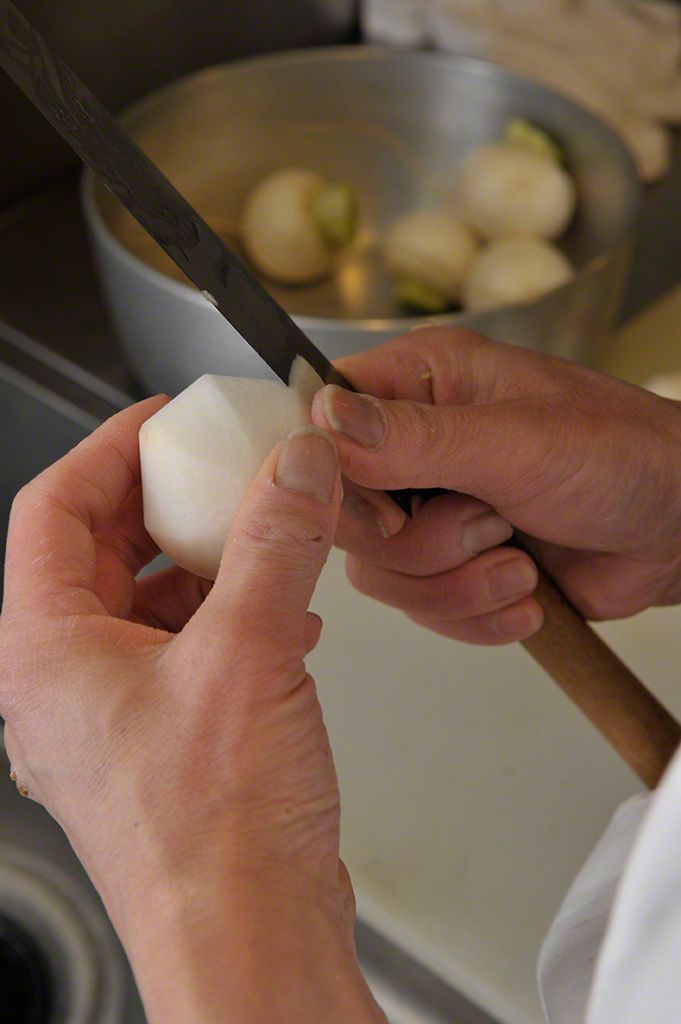 Japanese cuisine calls for all the ingredients to be trimmed to the same size. 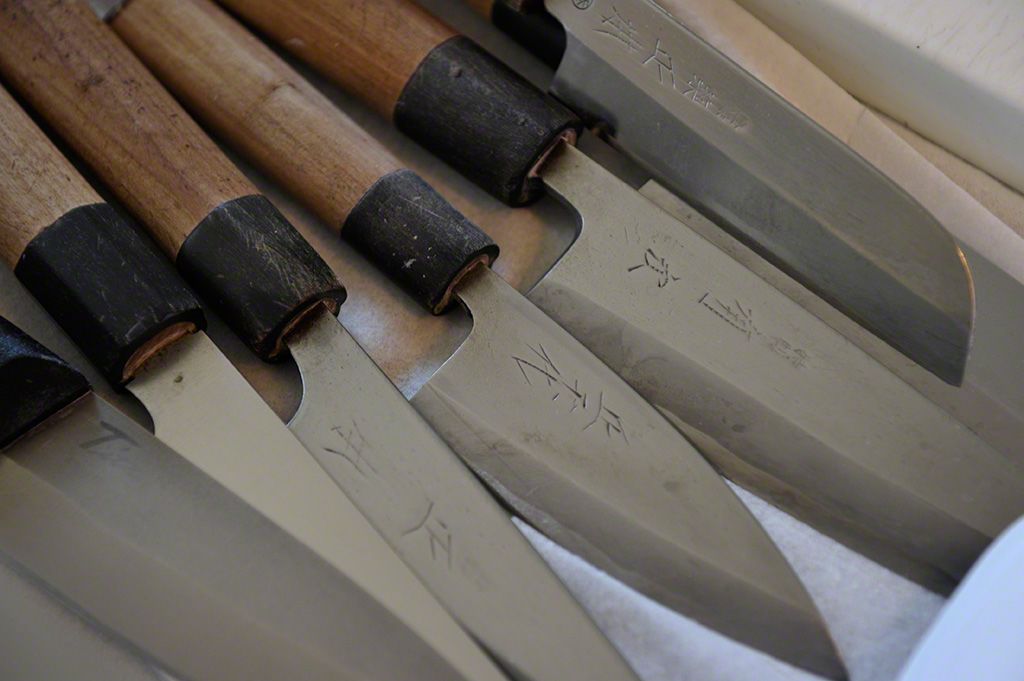 These knives are Kondō Fumio’s most prized possessions. 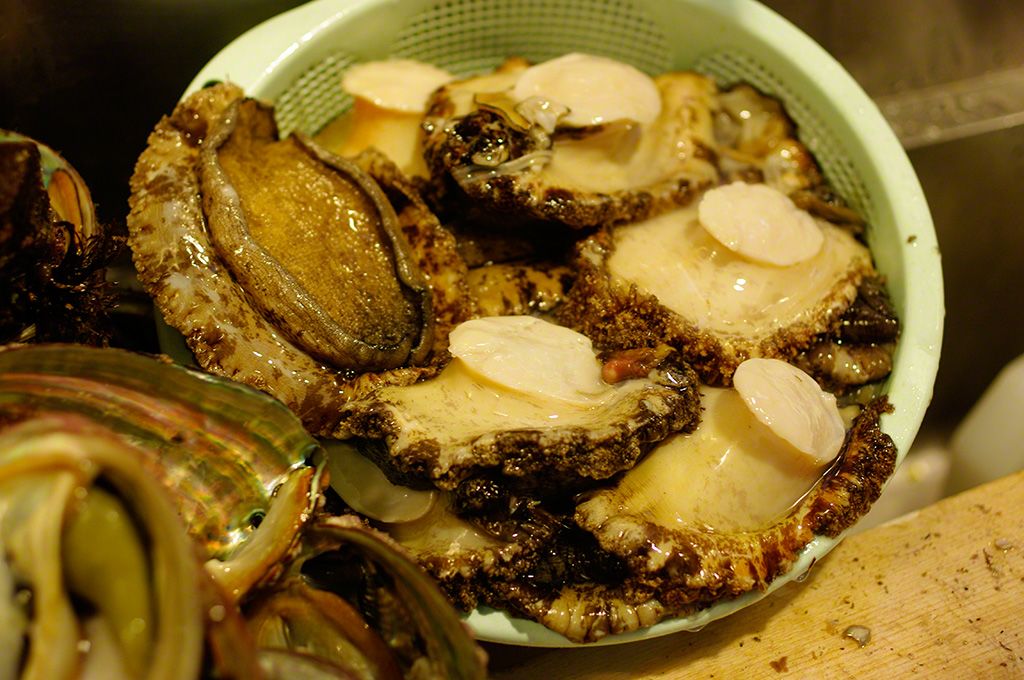 The finest-quality abalone are selected from the Tsukiji fish market and cleaned by hand. 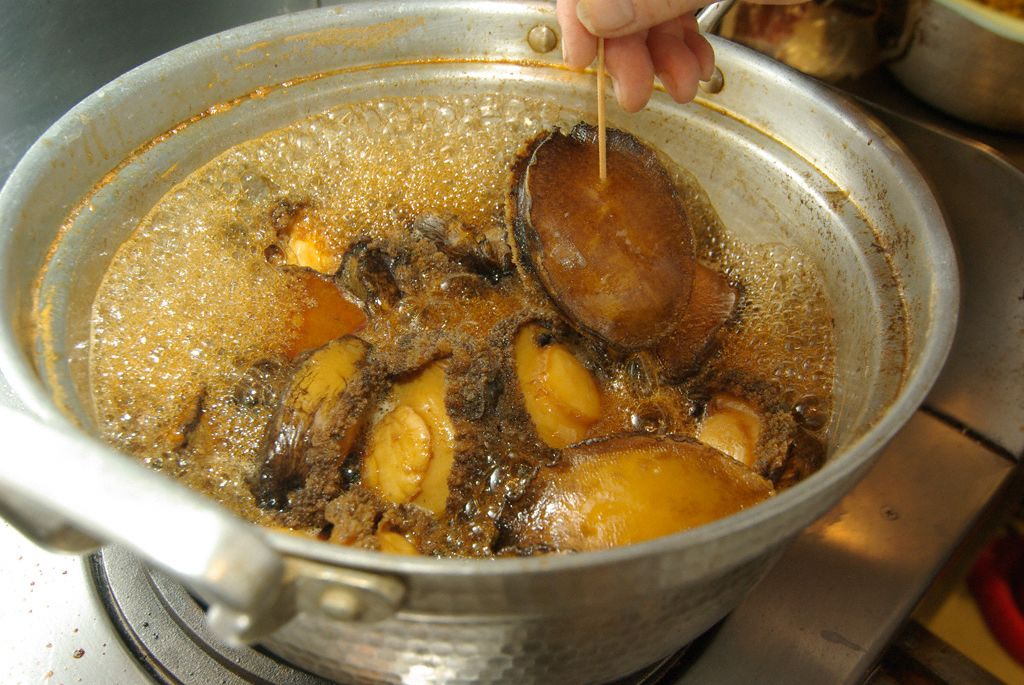 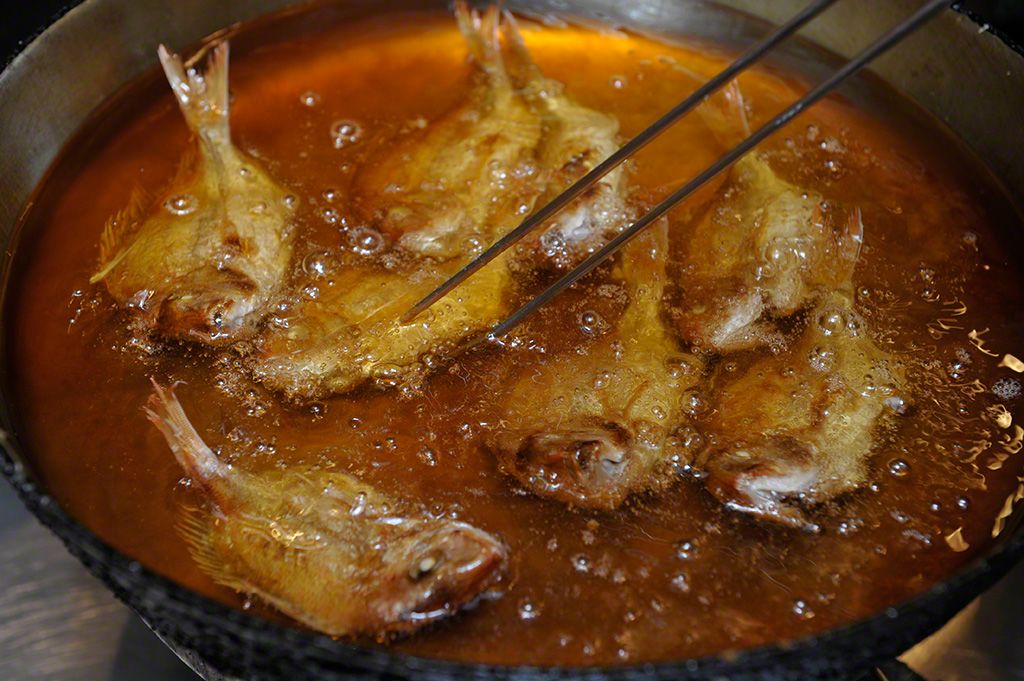 Frying sea bream. In frying, speed is essential to avoid overcooking the fish. 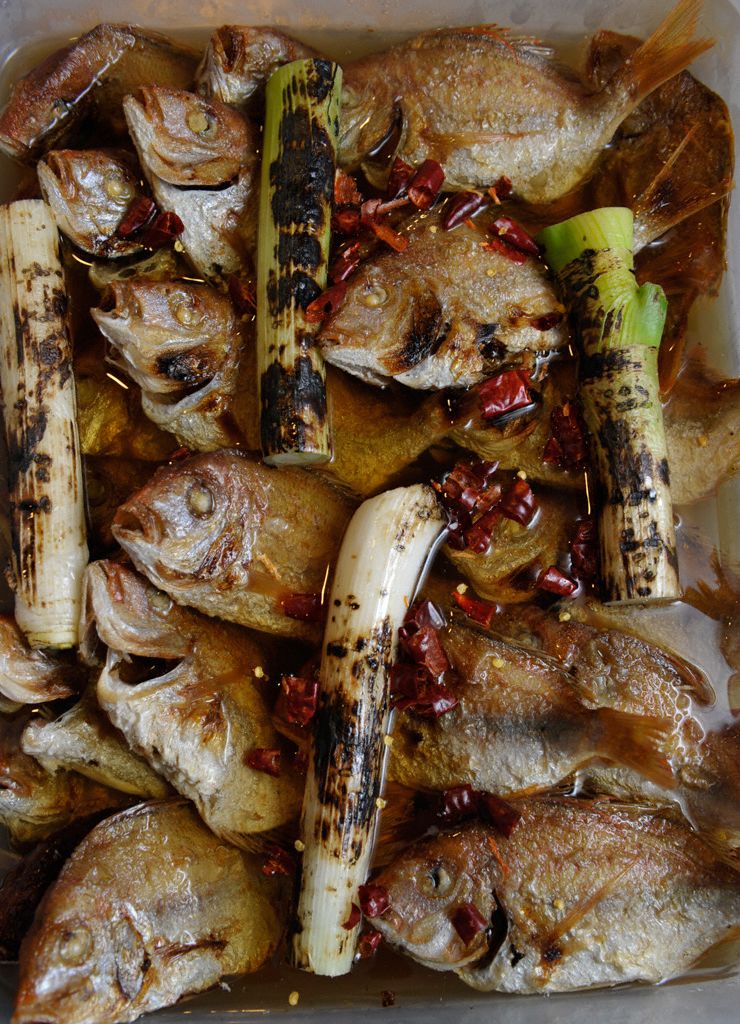 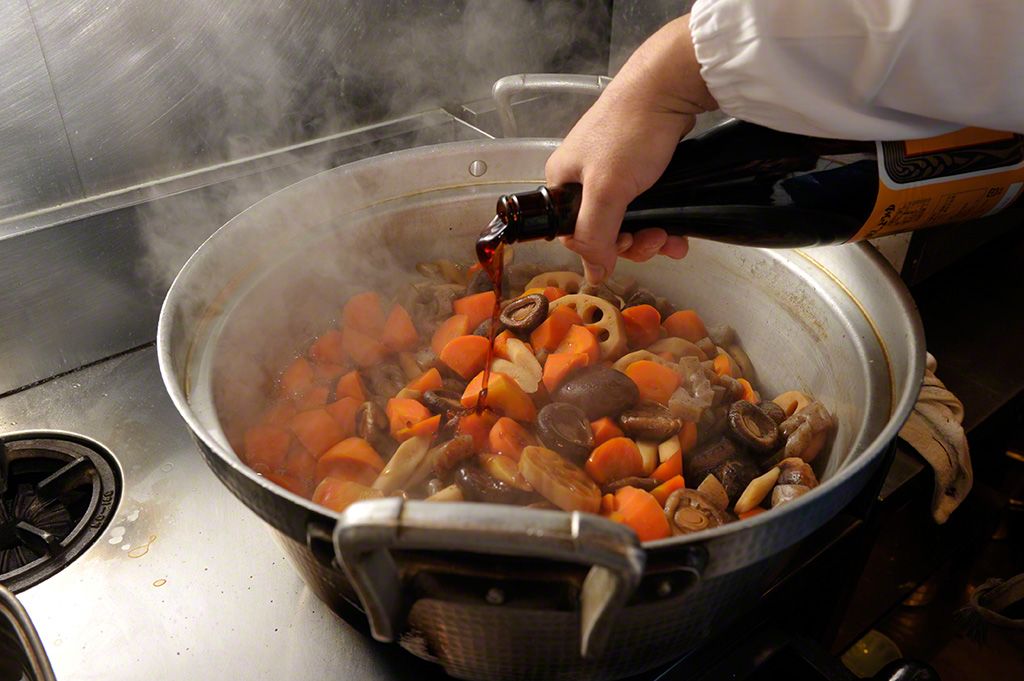 Adding dark soy sauce to the stock for the “nishime” vegetable stew. 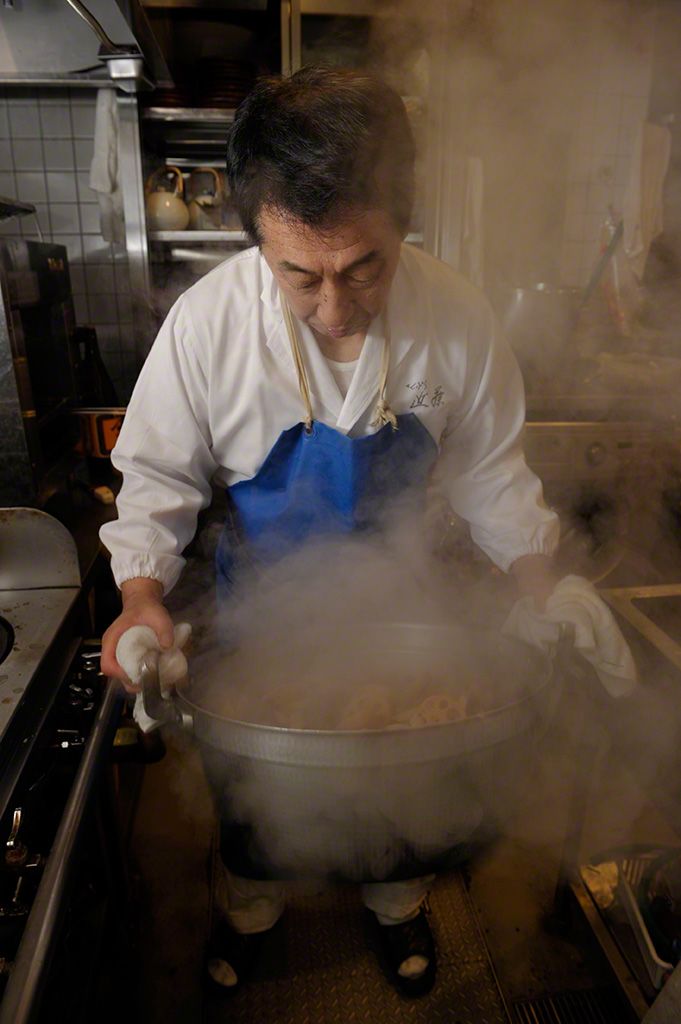 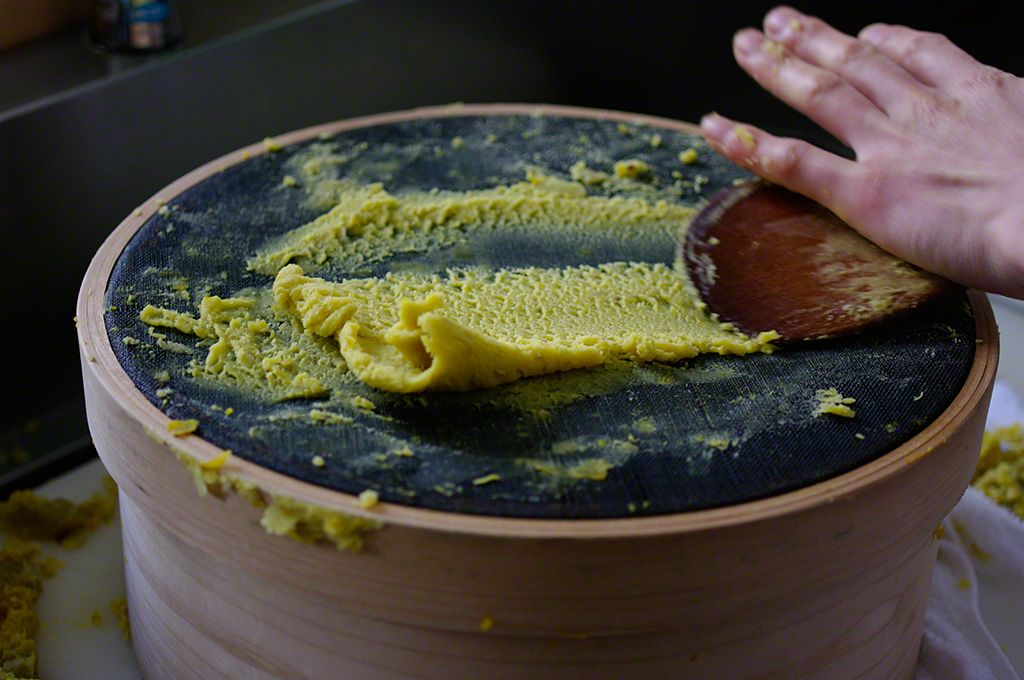 Preparing the sweet potato puree for the “kuri kinton” is time-consuming work, the hand patiently following the lines of the fine netting. 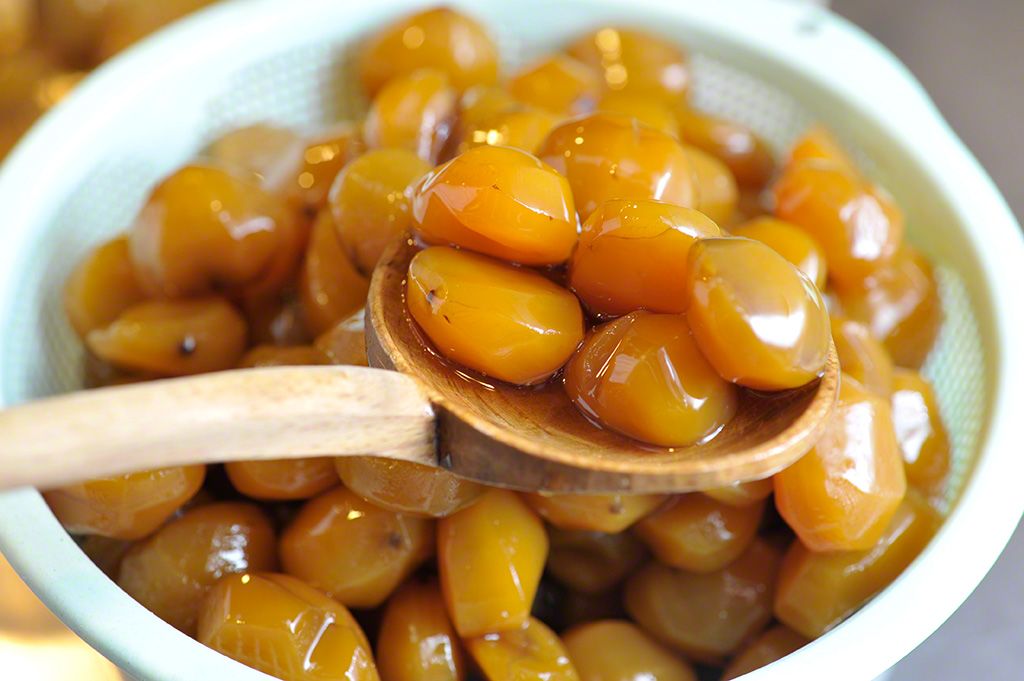 Chestnuts are simmered in honey and left for a whole day. 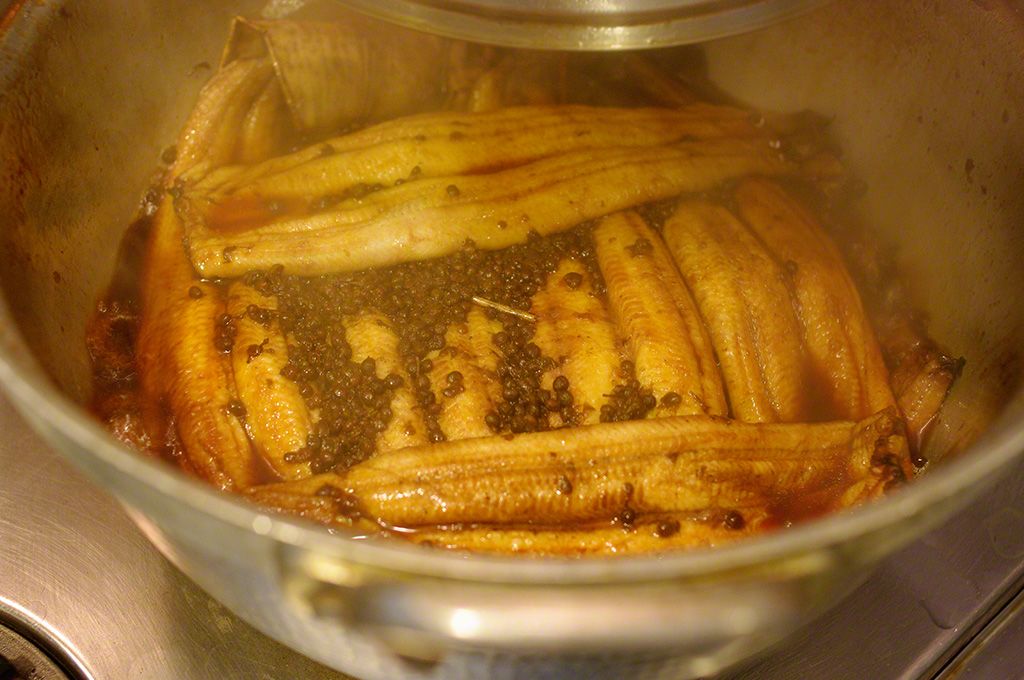 Eel cooked in “sanshō” (Japanese pepper). Because the meat is so soft, the cook needs to take special care to make sure that it does not fall apart as it is cooked. 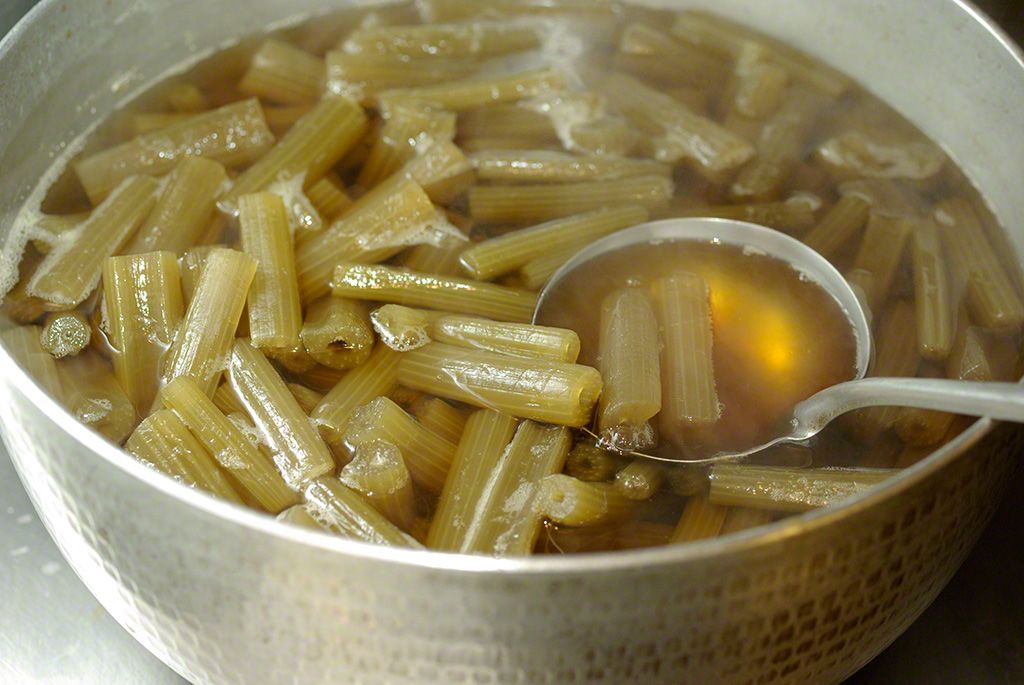 The butterbur is simmered in a light green stock to prevent it from losing its color during the cooking process. 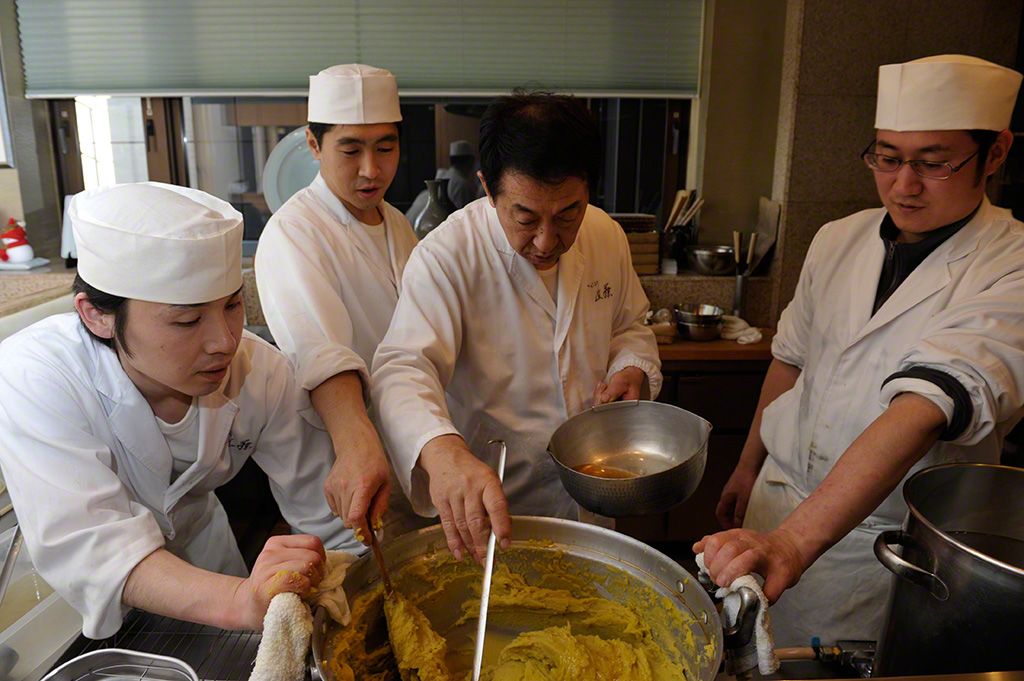 Preparing the chestnuts and sweet potato “kinton” takes many hours of work, and requires the help of several chefs. 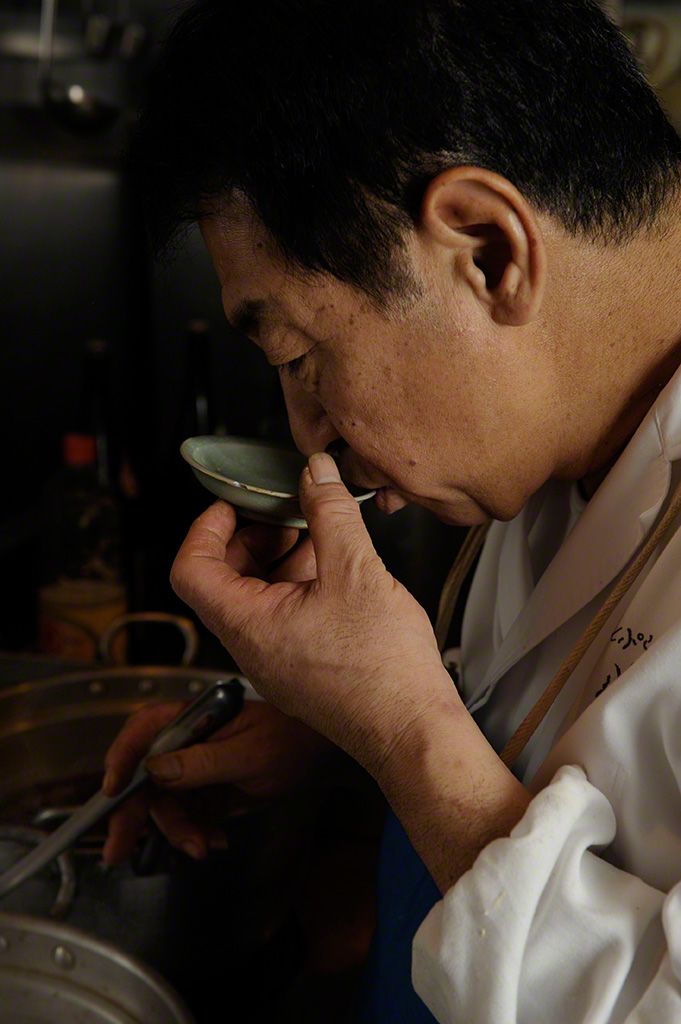 Kondō tastes the simmered dishes frequently to keep a close check on the constantly evolving flavors. 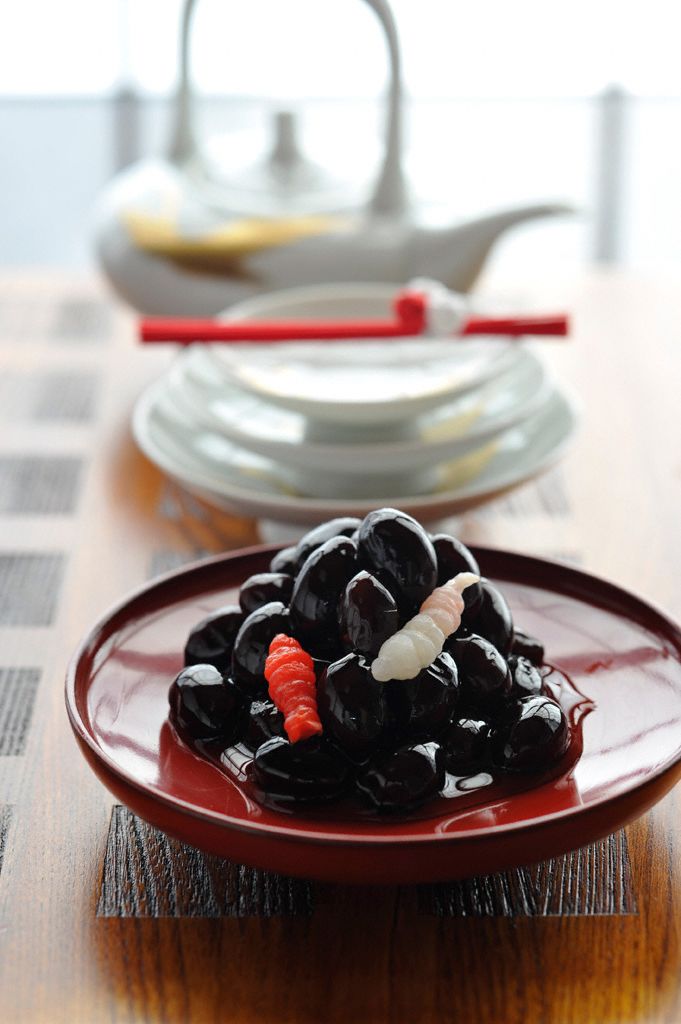 Four different types of sugar are used in the preparation of these sweet black soybeans. 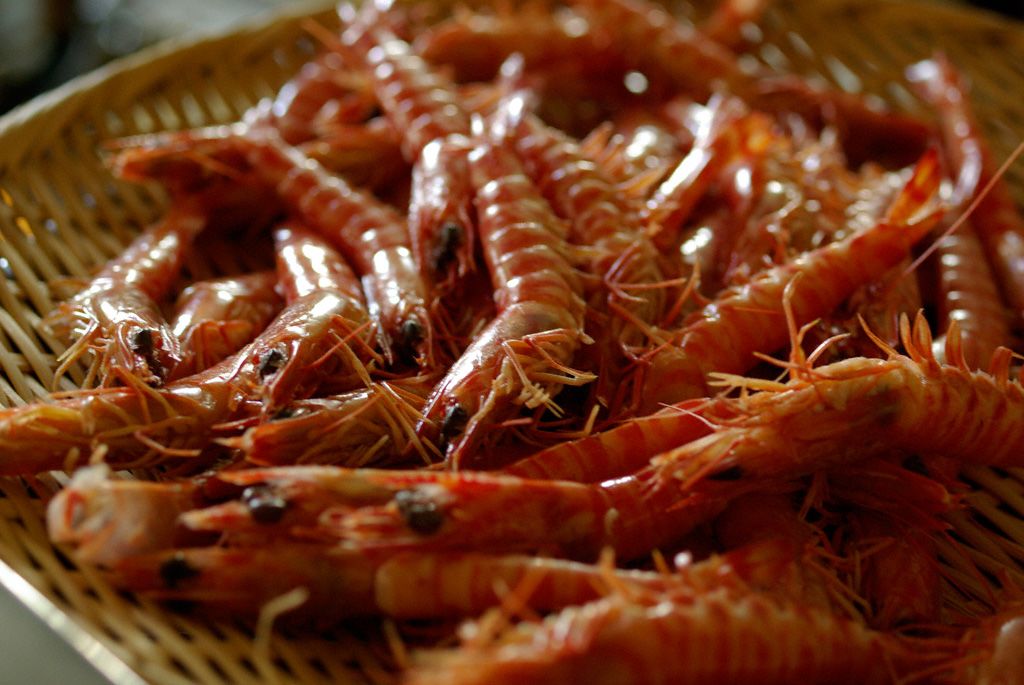 The shrimp are briefly boiled while still alive and then simmered to avoid shrinkage. 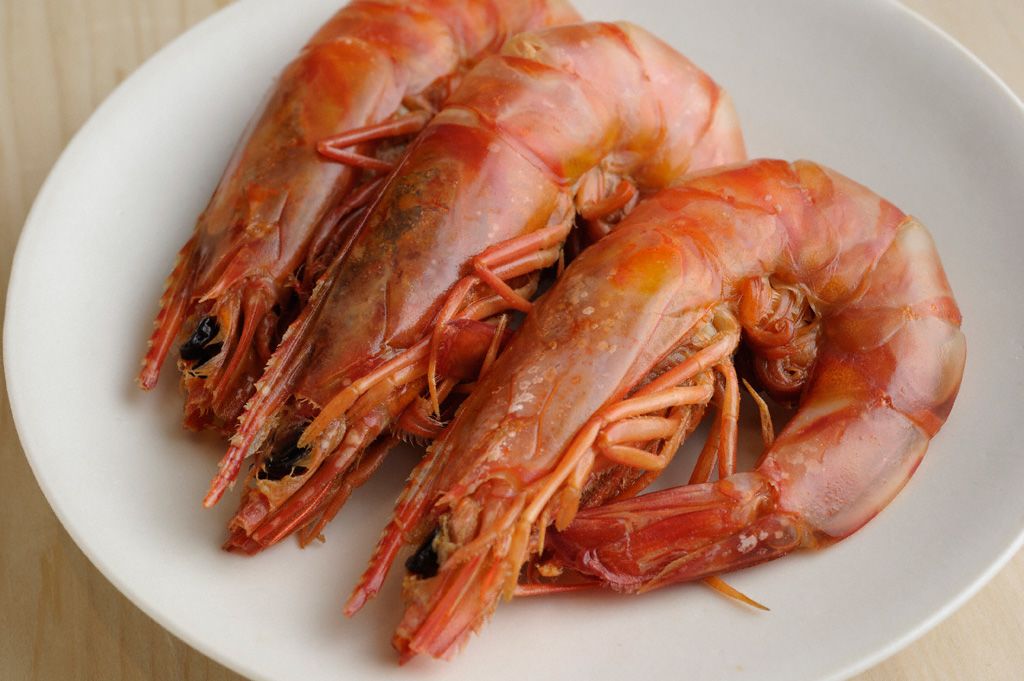 Shrimp cooked in their shells. 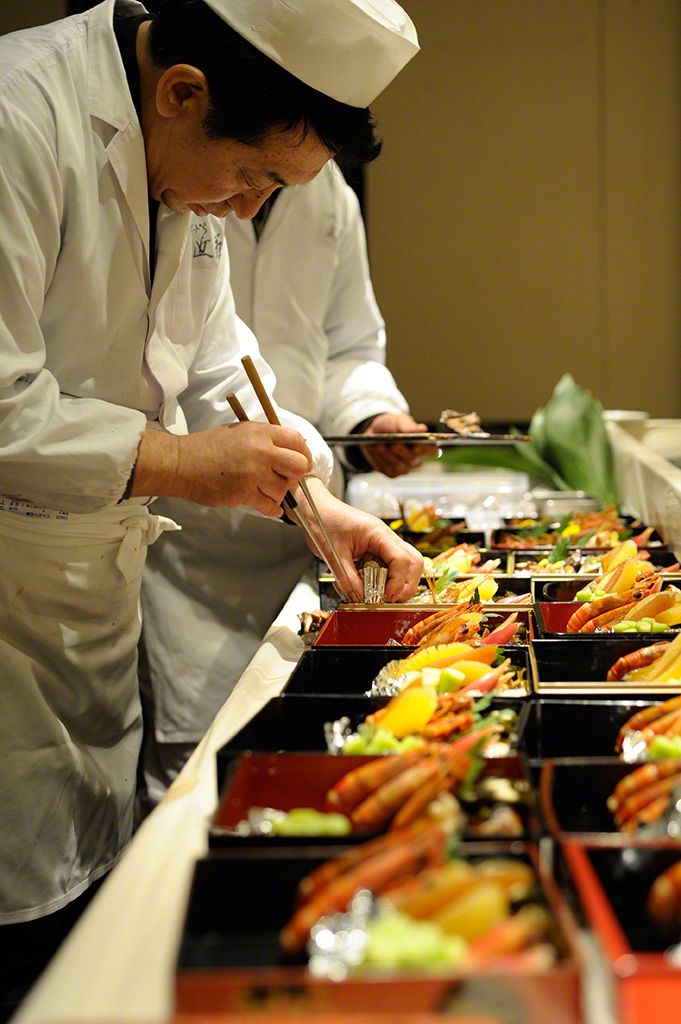 Packing the boxes carefully so that the contents do not shift. 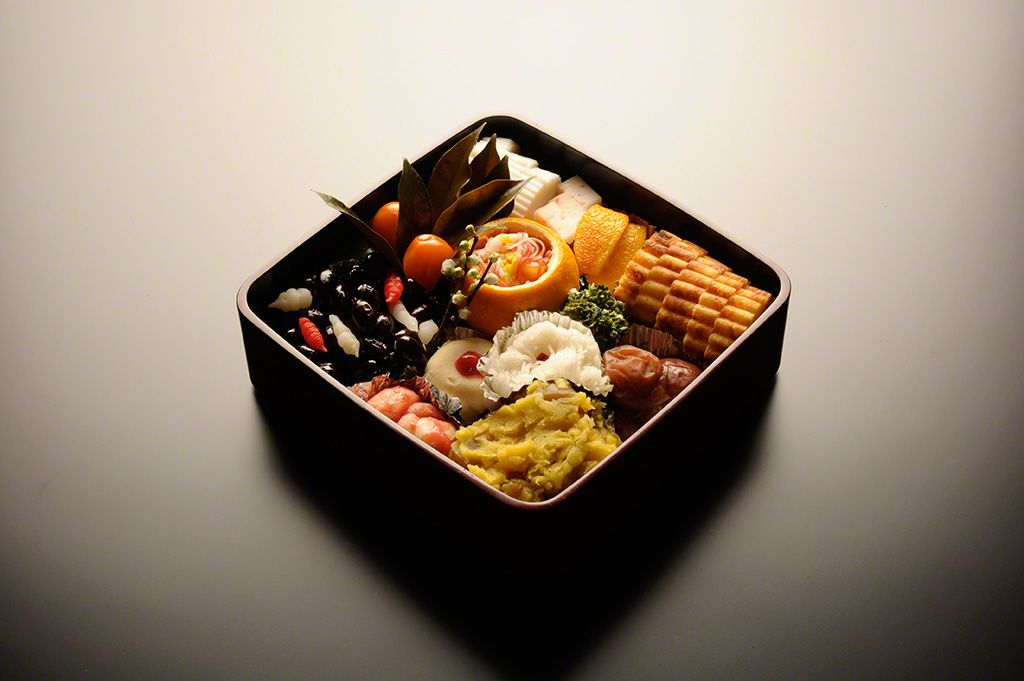 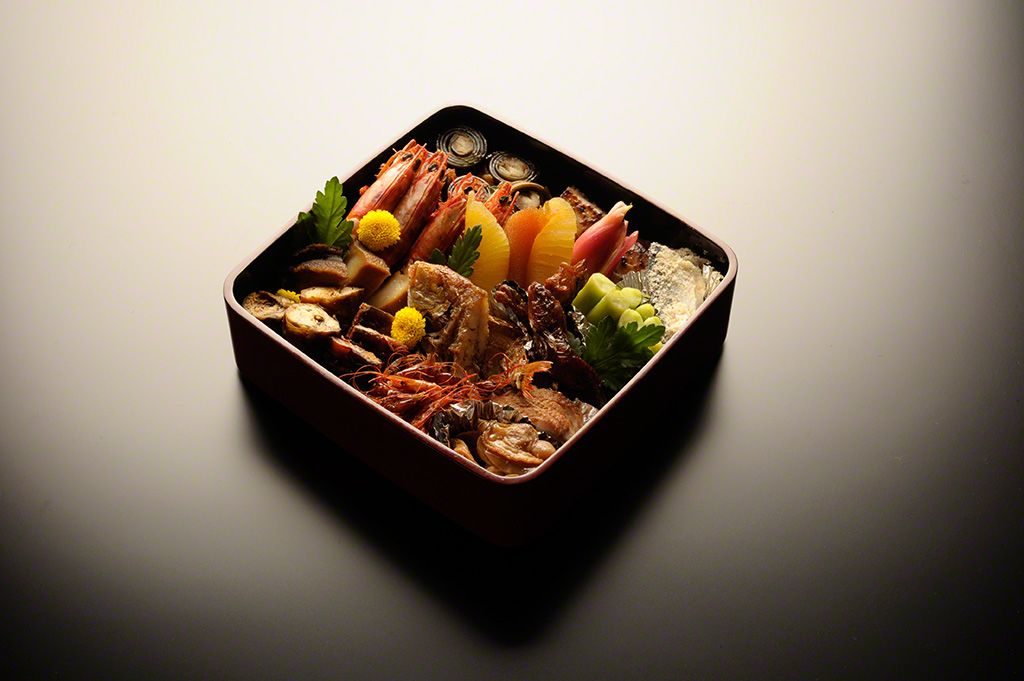 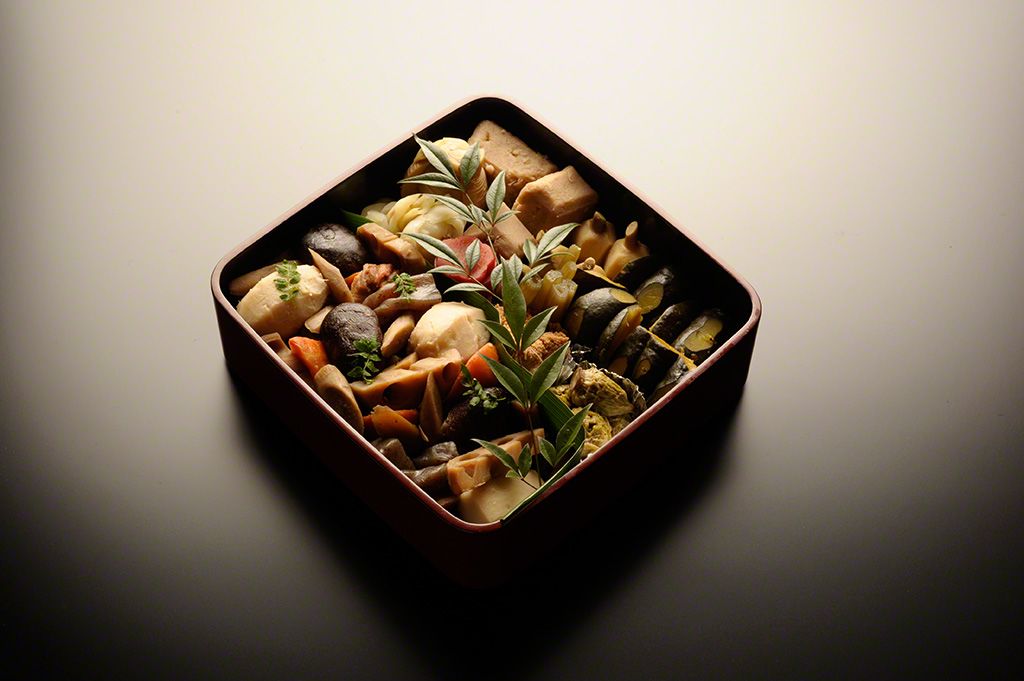