Come, Snow: Moments of Respite in the Snow Country (Photos)

Culture Lifestyle Feb 20, 2012
In Japanese, the snow-heavy regions in the north and west of the country are known as yukiguni, or Snow Country. Even today, heavy snowfall sometimes isolates the Snow Country from the rest of Japan. Traditionally, winter festivals played an important role in helping the local people to get through the darkest months of the year. These heartwarming images introduce the people of the Snow Country, who live alongside the snow in all its abundance and beauty in their everyday lives. Click on the bottom of the photos to hear a recording of “Yuki” (Snow), a traditional children’s song.

The Hokuriku region on the Sea of Japan and the Tōhoku region in the north of Honshū are among the snowiest areas on the planet. Winter in these regions can mean several days of nonstop snowfall at a time. At lower altitudes, it is common for snow to reach heights of a full meter or more. In the mountains, the figure might be two or three times higher. Known as yukiguni (Snow Country) in Japanese, these snowy regions account for close to half of Japan’s land area, and are home to some 20 million people.

Winter can be a daily struggle in the Snow Country. Daily life in such a climate presents many challenges. Constantly clearing snow from roads and roofs is just one of them. Every town and region has its own way of celebrating during the dark days of winter and putting a bit of brightness into spirits dampened by the long cold season. Some of the local festivals and markets date back several hundred years. This collection of photos by Saitō Ryōichi shows the local people enjoying these special moments of escape from the daily grind. The images are full of the vitality and warmth of the winter festival season.

Saitō explains, “It’s easy for people to become shut off from the world when snow is falling for days on end. These winter festivals offer a much-needed change of pace, and provide an important opportunity for people to let their hair down and recharge their batteries.”

“The grown-ups get almost as excited as the children when the festival day draws near. The festivals bring back happy memories of childhood, when snow was a friend and playmate. The festival gives people a lift and helps them to keep going till spring. The atmosphere during these festivals is something unique to Snow Country. I hope something of this special atmosphere comes through in my photographs.”

(Click on the lower half of the photos to play “Yuki”)

More on the Yukiguni Winter Festivals and Markets

Paper Balloon Festival
Giant paper balloons painted with legendary warriors or great beauties float through the night sky. Tradition has it that the festival began in the Edo Period (1603–1868) when famed scientist Hiraga Gennai came to provide guidance for a local copper mine and introduced locals to the principles of hot air balloons. The Paper Balloon Festival takes place on February 10 in the Uehinokinai area of Nishiki-Chō, part of Semboku City in Akita Prefecture.

Bonten Crossing the River
A boat carries a magnificently adorned state of the god Bonten across the Omono River to the Izusan Shrine, sacred to Bonten. The festival takes place on February 11 on the shores of the Omono River in Daisen, Akita Prefecture.

Inukko Festival
The parks and plazas of Yuzawa, Niigata Prefecture are filled with snow shrines and giant snow dogs in this regional festival that dates back nearly 400 years. The festival holds a special place in the hearts of locals, helping to see them through the long winters in high spirits. The two-day Inukko Festival begins on the second Saturday in February.

The Yokote Igloo Festival
The distinctive igloo-like snow houses of Yokote are part of a Lunar New Year celebration that dates back around 400 years. Snow houses are built by hollowing out huge mounds of snow, and made into shrines to Shinto water gods. Children serve amazake (a hot drink made from fermented rice) and mochi (rice cakes) to visitors who make an offering. The festival takes place in Yokote, Akita Prefecture on February 15 and 16.

Hachinohe Enburi Festival
The enburi is a ceremonial dance to pray for a bountiful harvest. The dance incorporates movements drawn from the cultivation of rice, including sowing seeds and transplanting seedlings. After a ceremonial dedication at the Chōjayama Shinra temple, the festival and the lively Issei Odori dances spread to the city center. Hachinohe Enburi takes place February 17-20 in Hachinohe, Aomori Prefecture.

Hanawa Morning Market
Nearly fifty stalls maintain this Kazuno tradition, said to date back some 400 years. In addition to fresh local produce, merchants offer everything from fish, fruit, and homemade delicacies to clothing and straw crafts. Held on days ending in a 3 or an 8 (e.g. February 23, March 8) in Kazuno, Akita Prefecture.

Violinist Takezawa Takeshi has been concertmaster of the French National Orchestra of Lorraine for nearly twenty years. Here he plays the classic children’s song “Yuki” (Snow) to match the feelings these photos evoke. Let Takezawa’s violin and Saitō’s photos whisk you away on a trip to the Snow Country at festival time.
Violin by Takezawa Takeshi 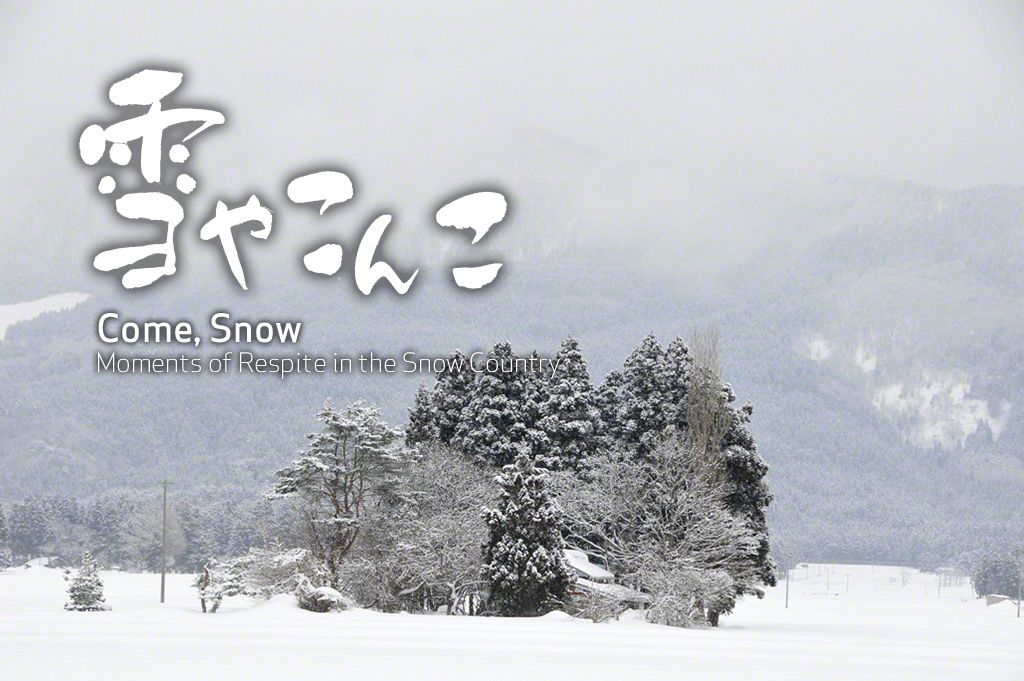 A canopy of trees shelters a house from snow and wind (Kakunodate, Semboku, Akita Prefecture) 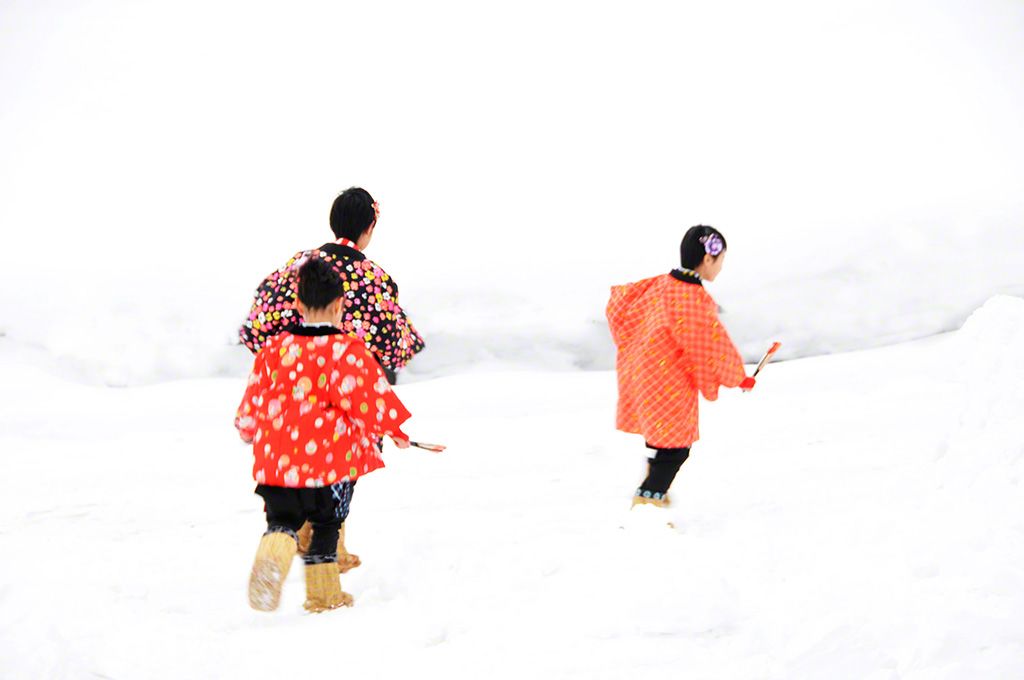 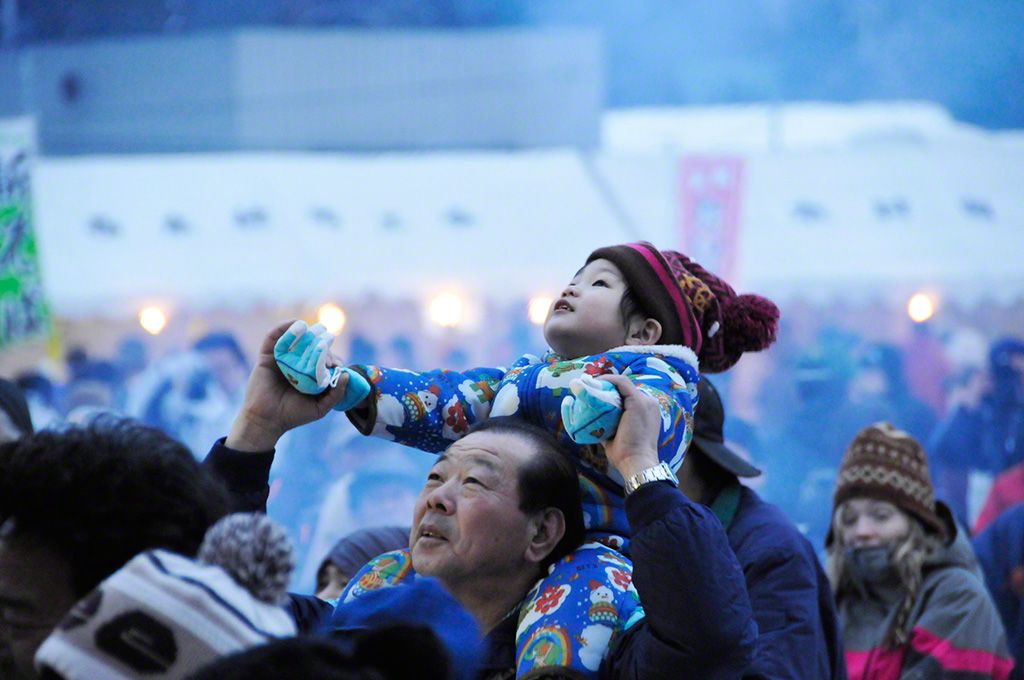 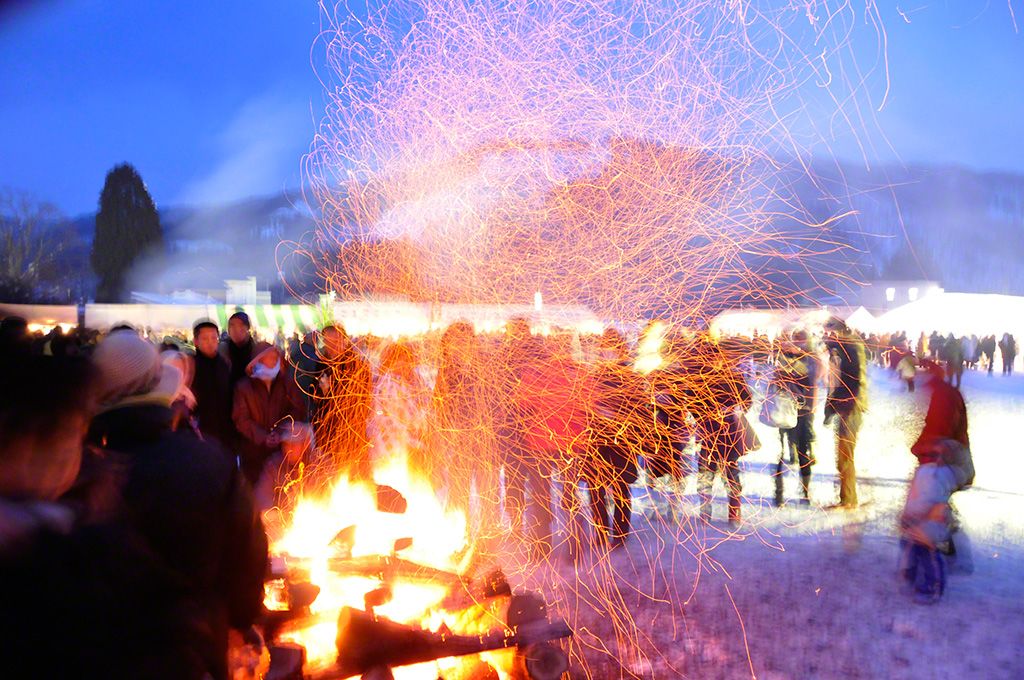 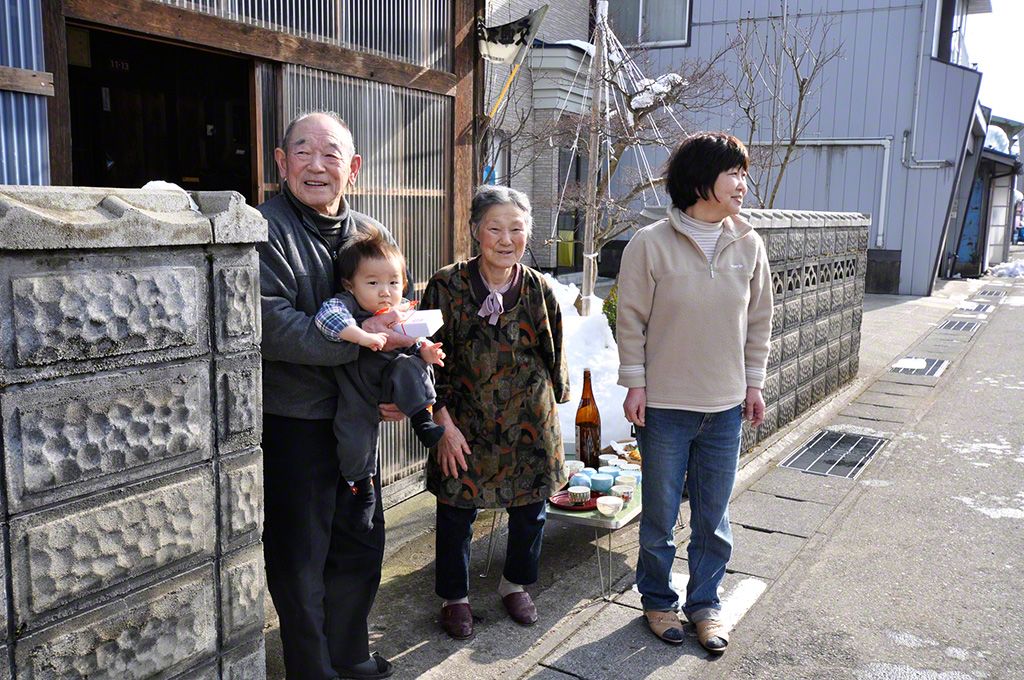 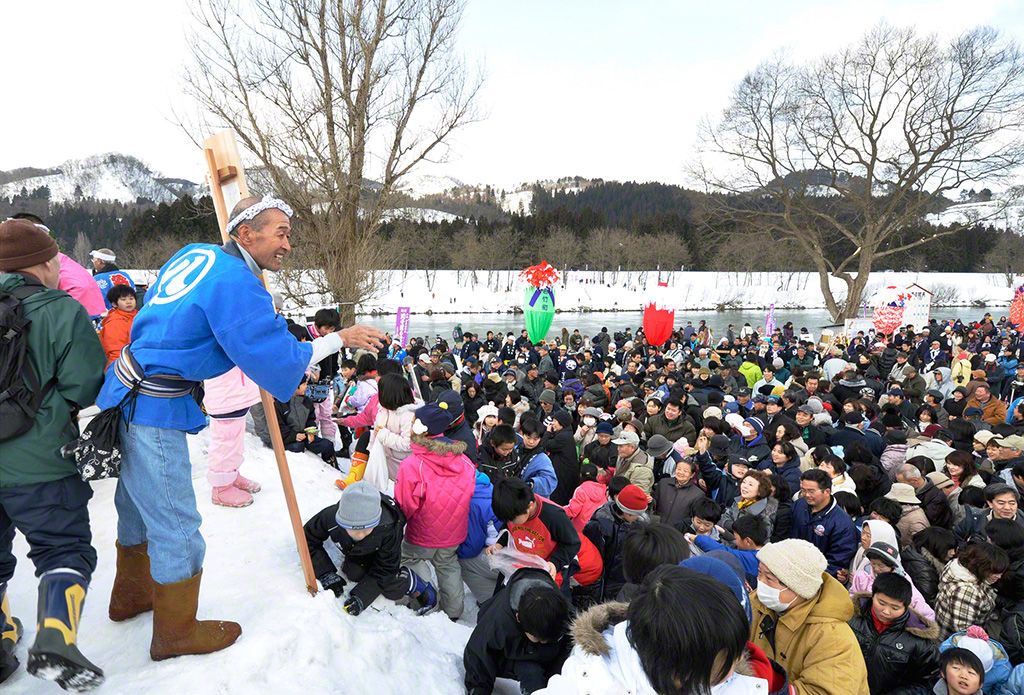 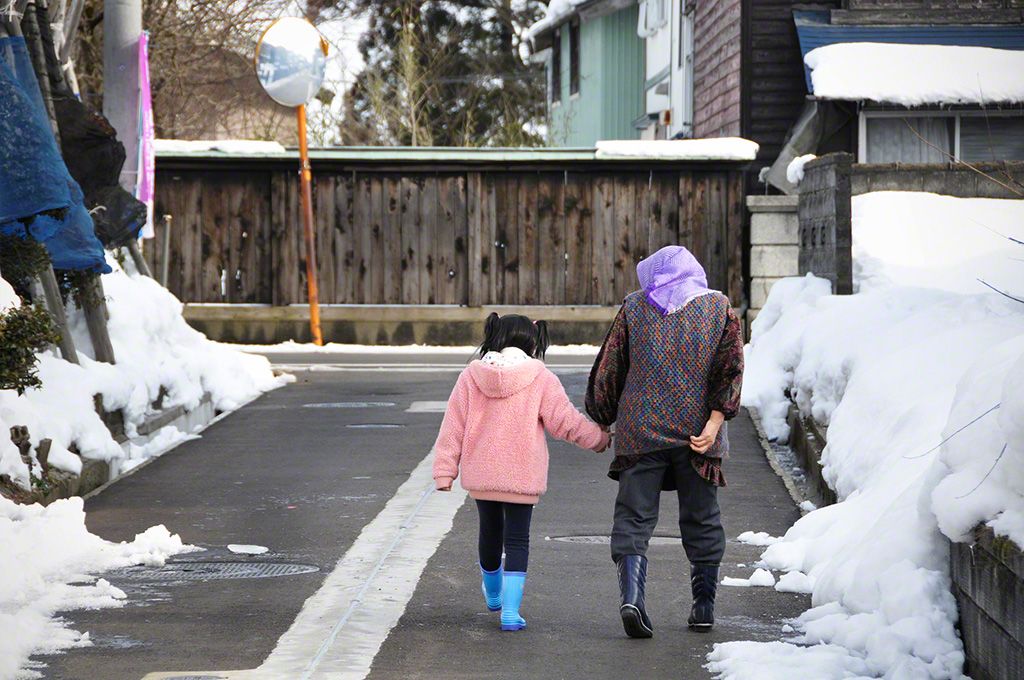 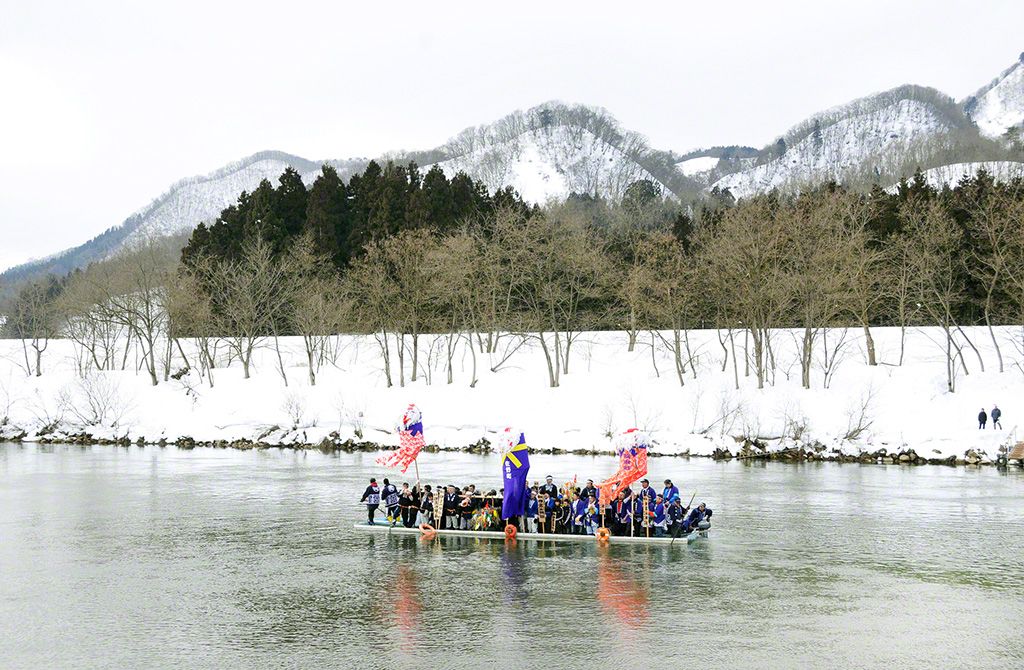 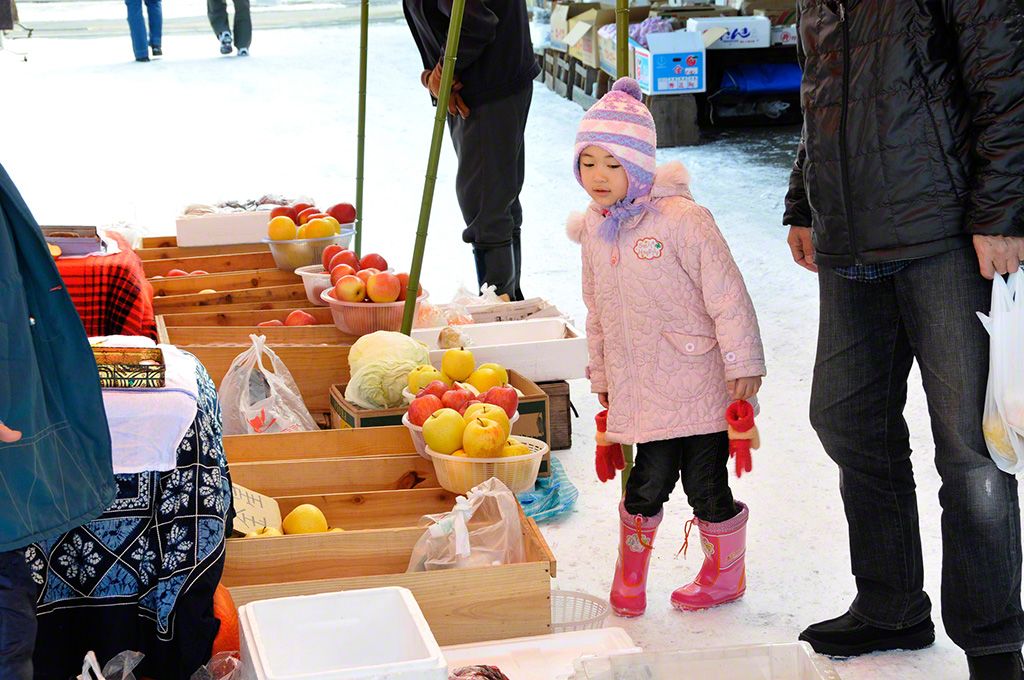 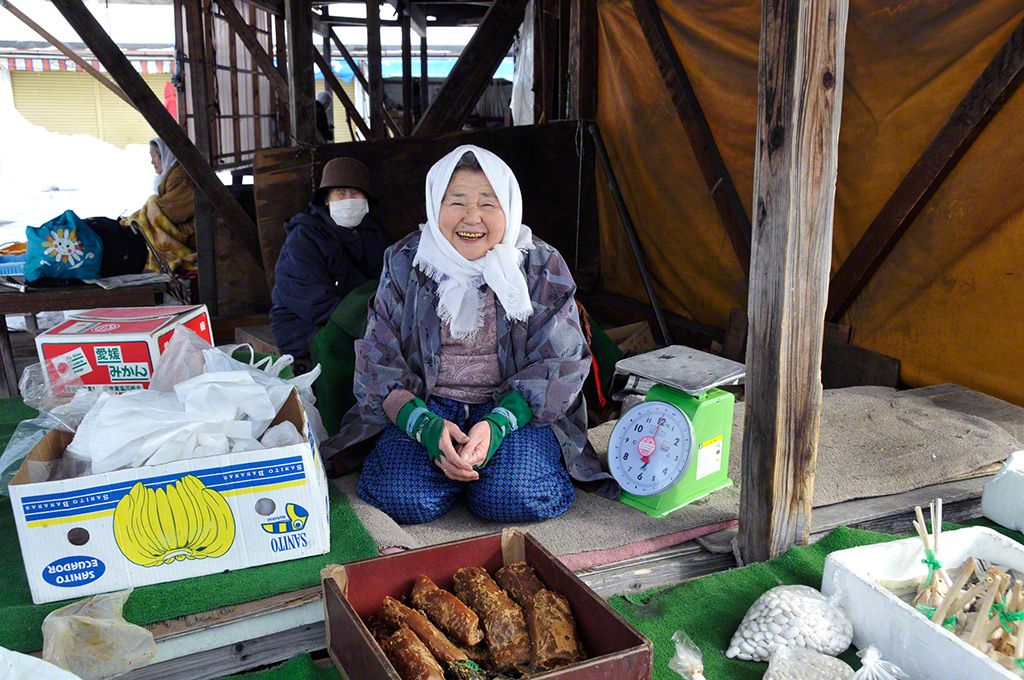 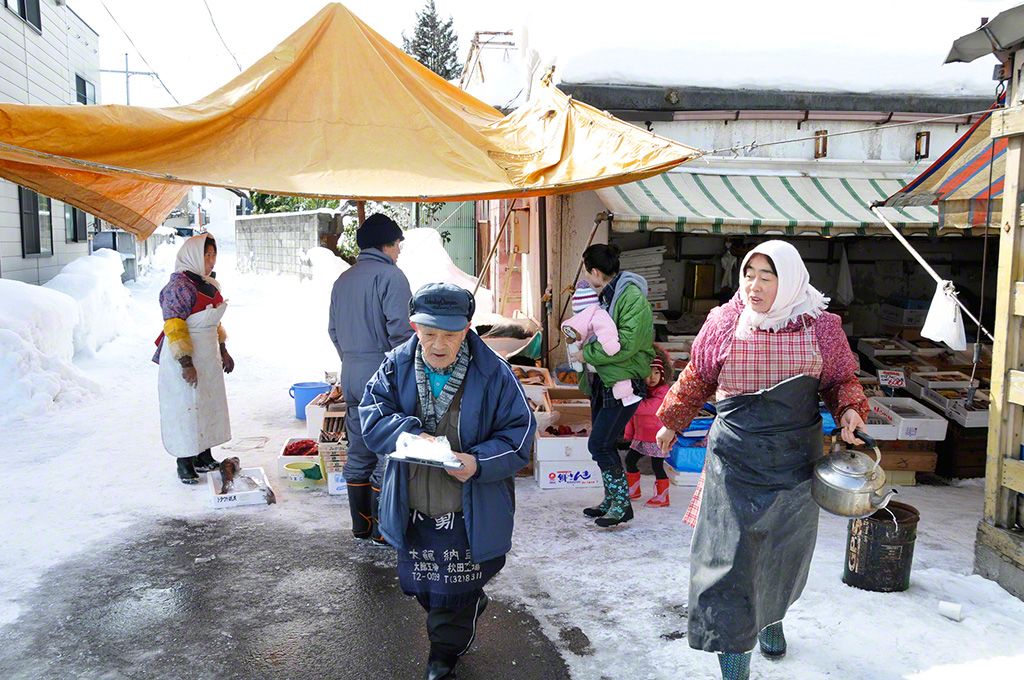 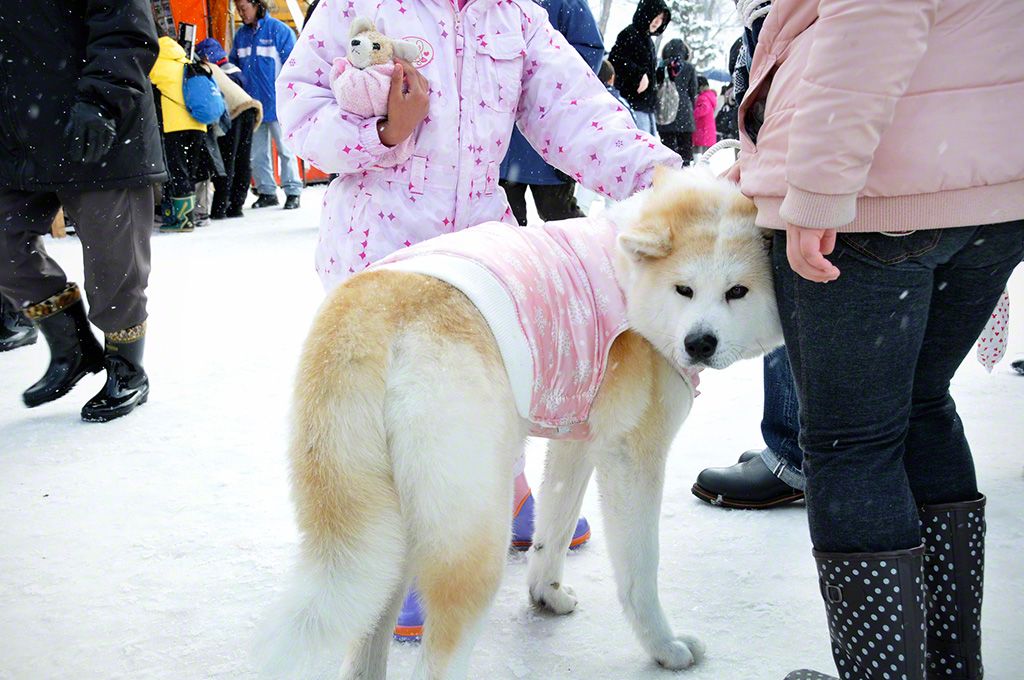 An Akita-breed dog at home in the canine-heavy atmosphere of the Inukko Festival (Yuzawa, Akita Prefecture) 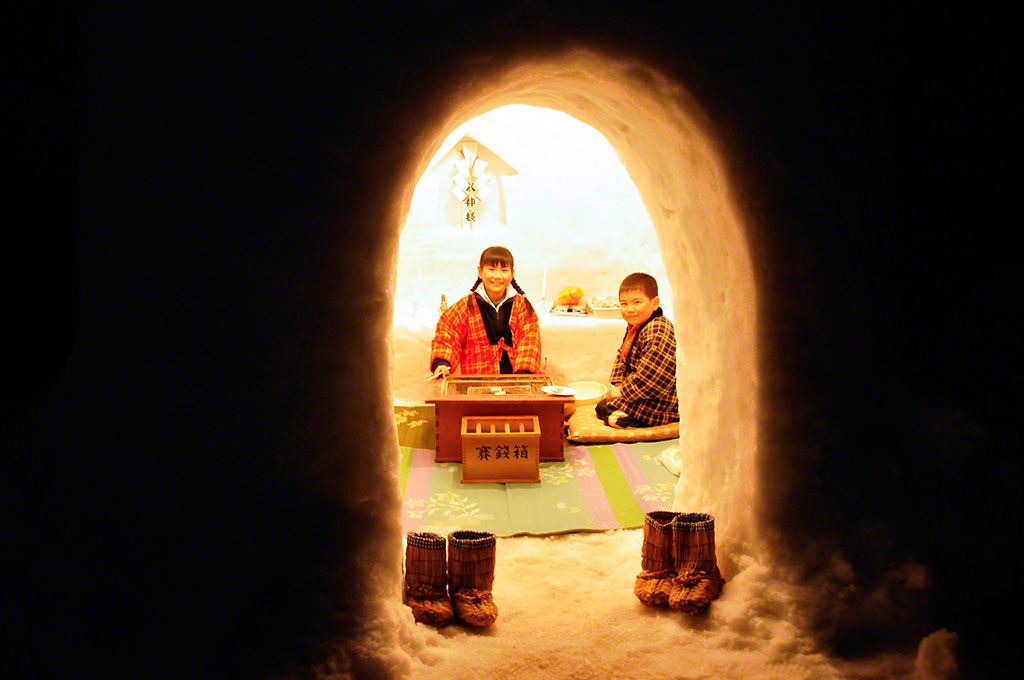 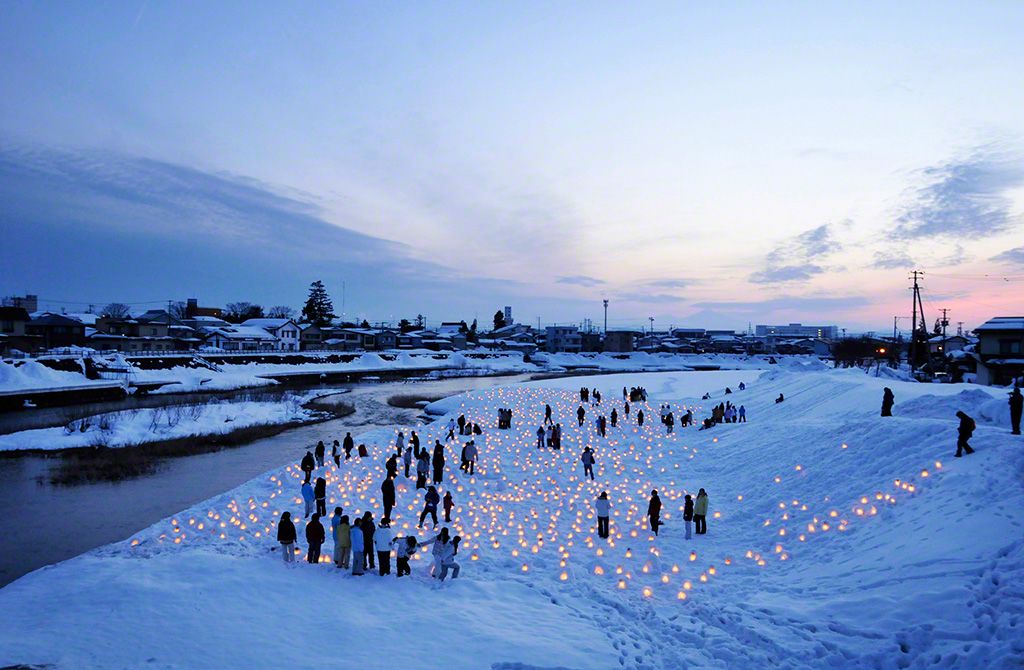 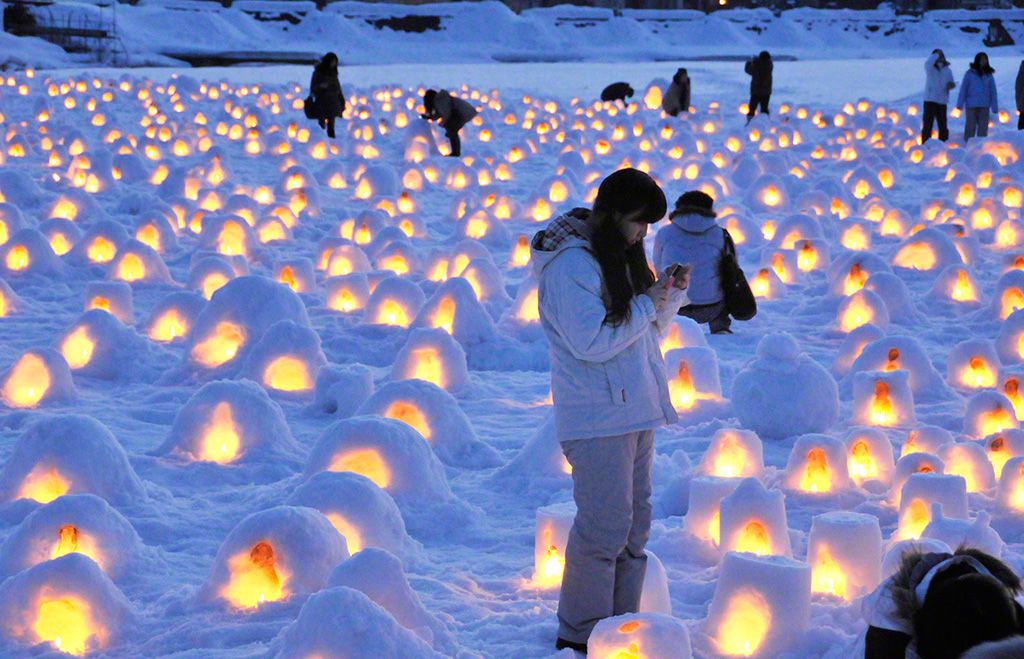 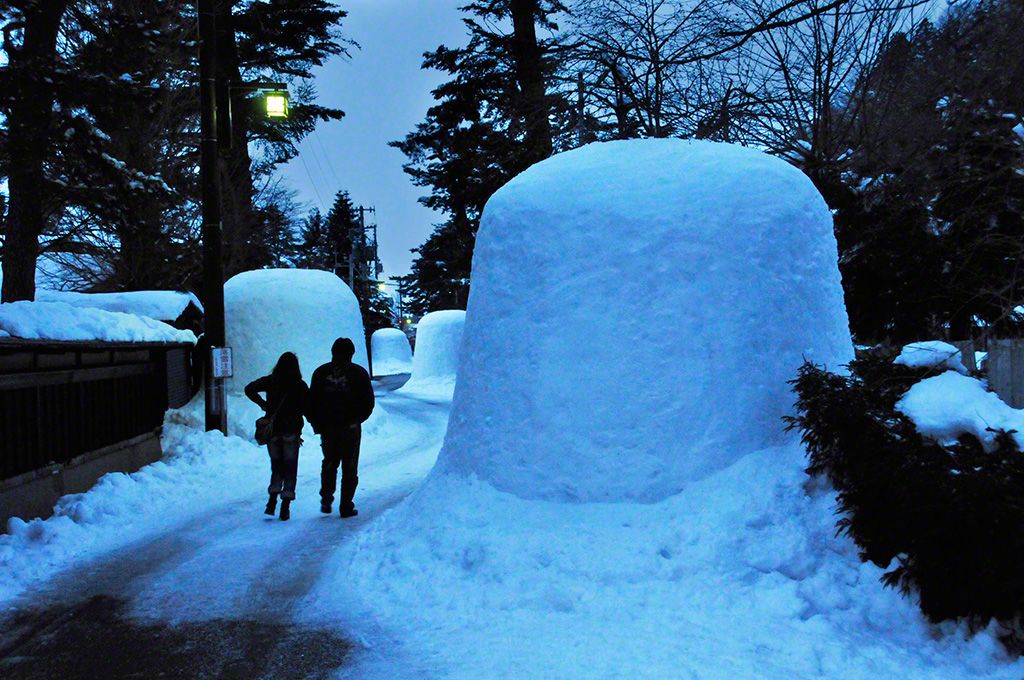 A glimpse behind the famous snow houses (Yokote, Akita Prefecture) 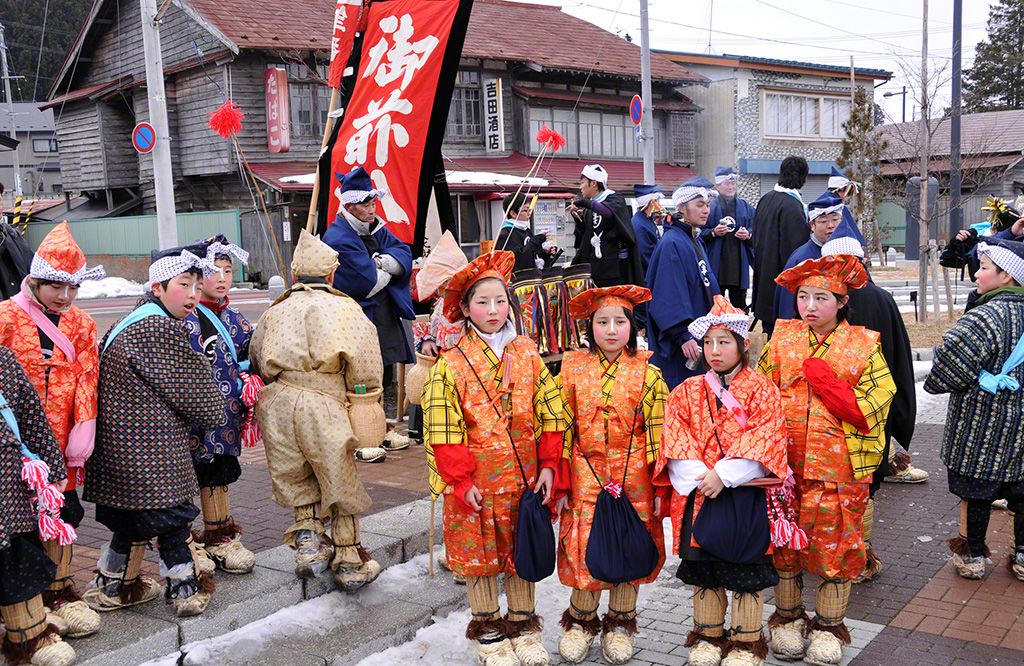 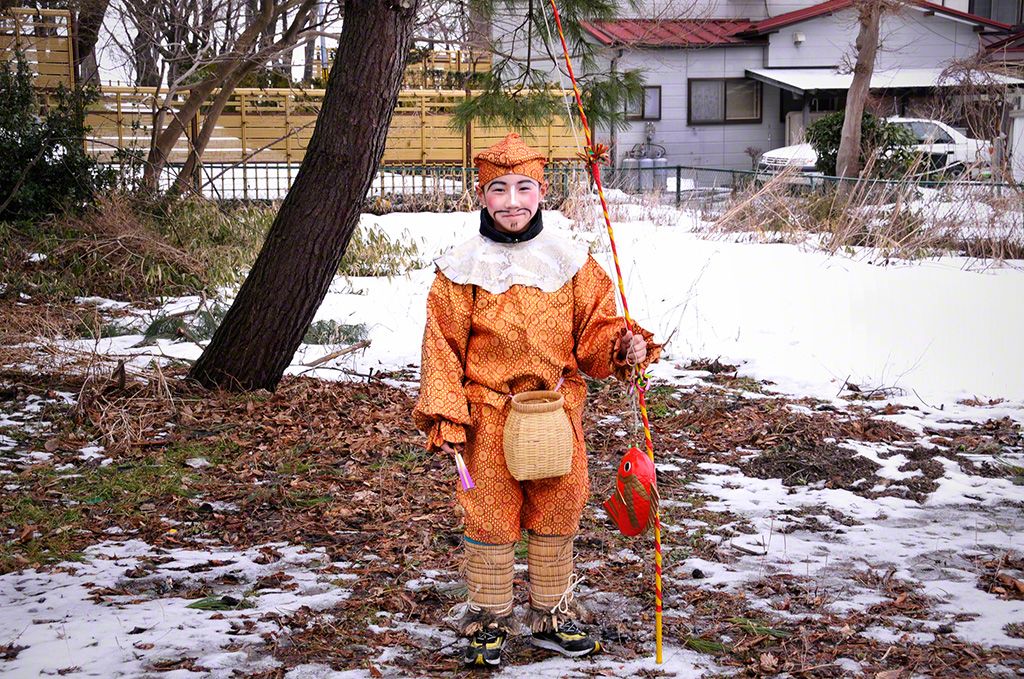 One of the stars of the Enburi Festival (Hachinohe, Aomori Prefecture) 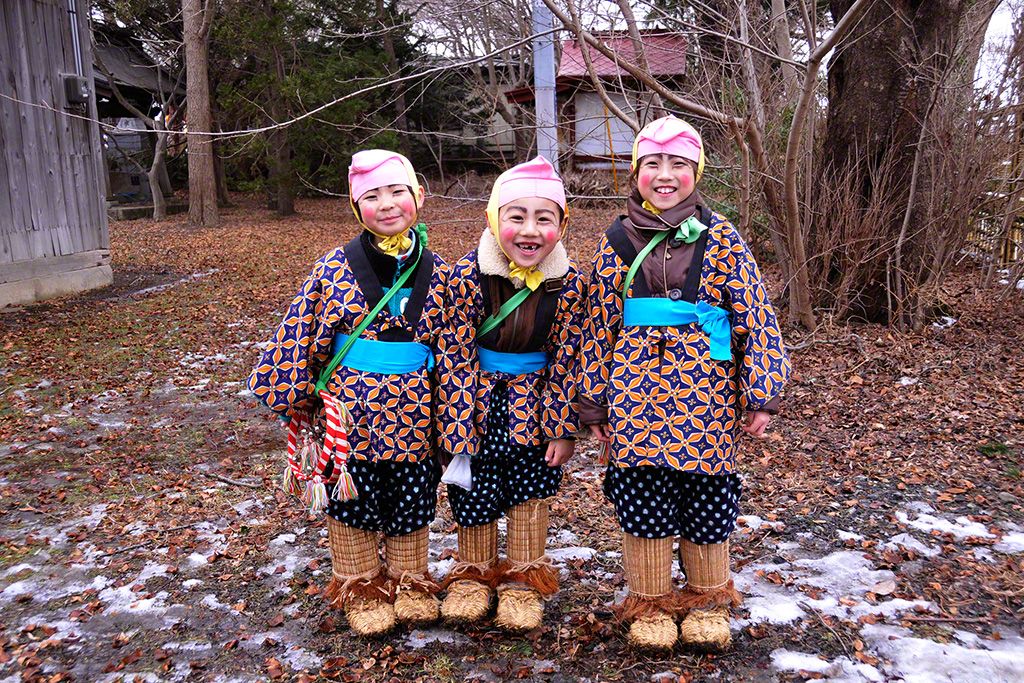 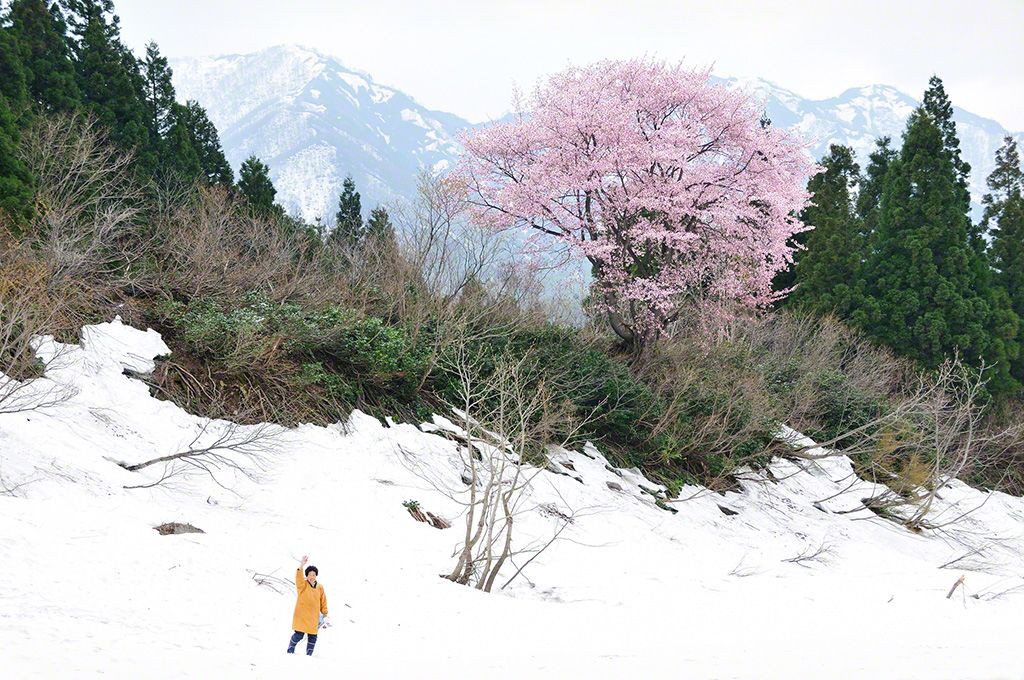