Tateyama: Another World Above the Clouds (Photos)

Environment Guide to Japan Travel Feb 22, 2013
The Tateyama mountain range in Toyama Prefecture is a special place, offering climbers access to a world of stunning snow-swept landscapes and a precious opportunity to see the ptarmigans that have lived here since the last Ice Age. Nature photographer Yanagi Akinobu presents a selection of his favorite images of the area. 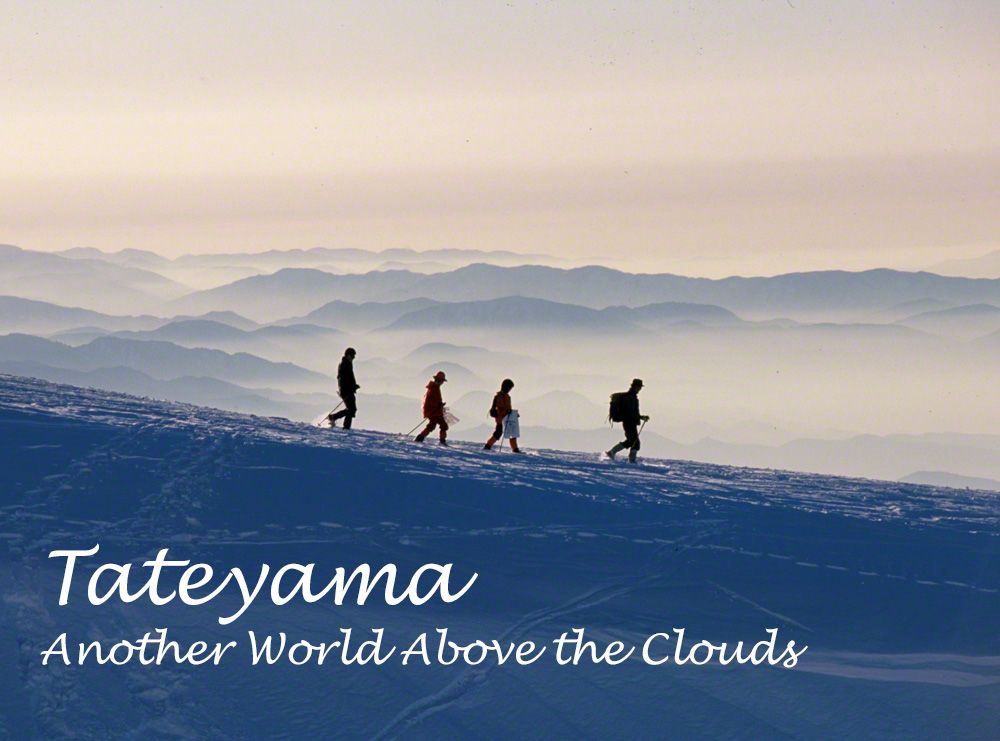 Growing Up Near Tateyama

For someone like me who grew up in Toyama, Tateyama is a special place. I’ve known the mountains here all my life. We often used to visit the mountains on school trips, and on clear days I used to love looking out at the peaks towering majestically over the town where I grew up. For a while after graduating from photography school, I lived and worked in a small lodge in the mountains, taking and editing photos of the surrounding landscape.

Three mountain ranges run north to south through the center of the Japanese archipelago. They are the Hida, Kiso, and Akaishi mountain ranges—often called the Northern, Central, and Southern Japanese Alps. Tateyama is not the name of a single mountain. It refers to a range of peaks that stretches out across the far north-west section of the Northern Alps.

Tateyama’s charm lies in the pure white snows that blanket it in midwinter. People are often left speechless by this world of limitless, white tranquility. On clear days, the snowy landscape stands in stark contrast to the brilliant blue skies. There is a feeling of magic, as if you have stepped into an ancient world.

The area around Tateyama is famous for its heavy snowfall. In the winter, cold fronts whip across the Japan Sea from Siberia and drive south into these mountains. Vast amounts of water vapor accumulate, forming large, snow-laden clouds that dump their cargo as they collide with the mountains. In some of the ravines, the drifts of fallen snow can reach heights of over 20 meters.

It was recently confirmed that Tateyama is home to three glaciers. This is the farthest south that glaciers have been found in the northern hemisphere. It is the tremendous amount of snow that has allowed the glaciers to form at such a low line of latitude (just 36 degrees north).

In my twenties and thirties I travelled to Alaska and Greenland to take photographs of the spectacular nature to be found there. I was in my forties when I started to get serious about taking pictures of Tateyama. Another 20 years have passed since then. But the magic of the landscape continues to surprise me, and the mountains reveal new aspects of themselves with every year that passes. 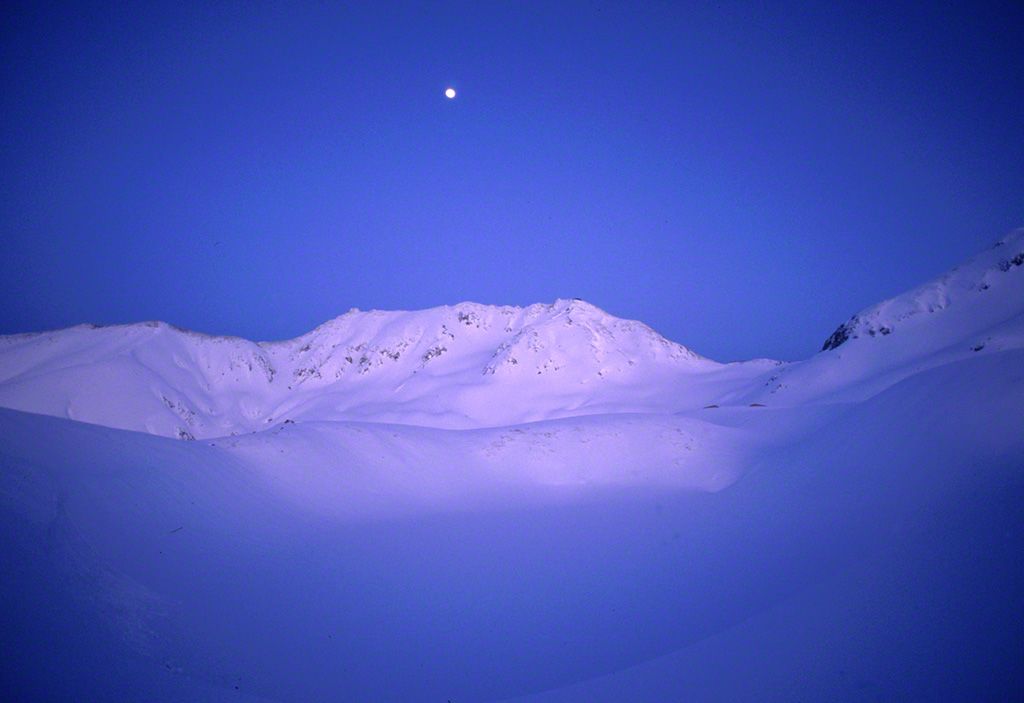 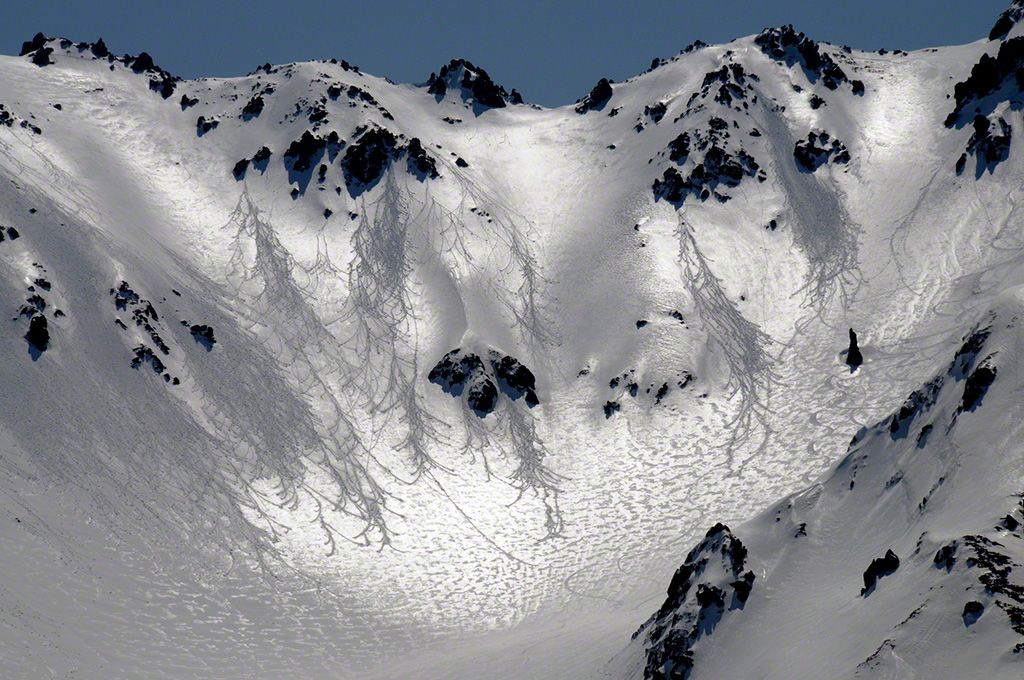 The north face of the Tateyama ridge line (April). 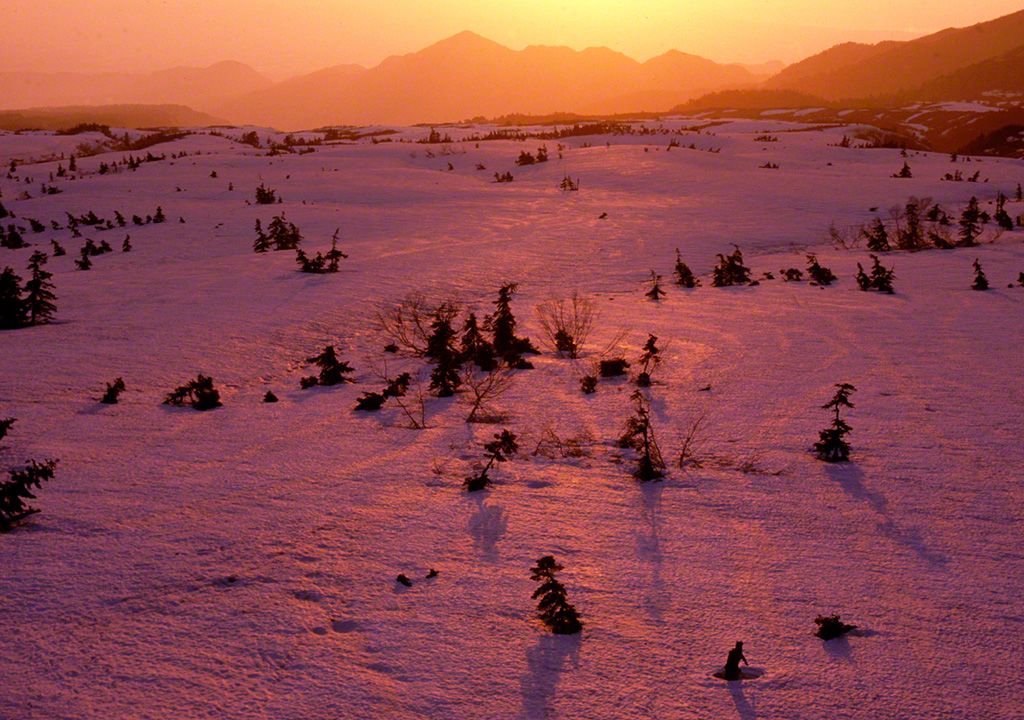 Sunset on the Midagahara plateau (May). 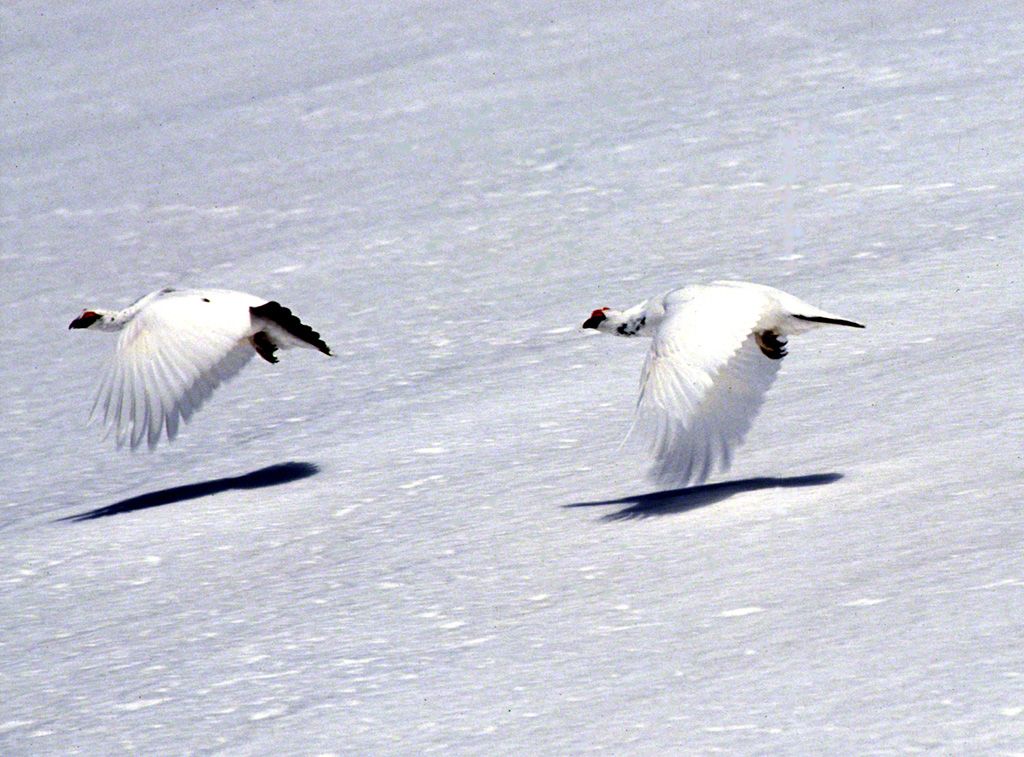 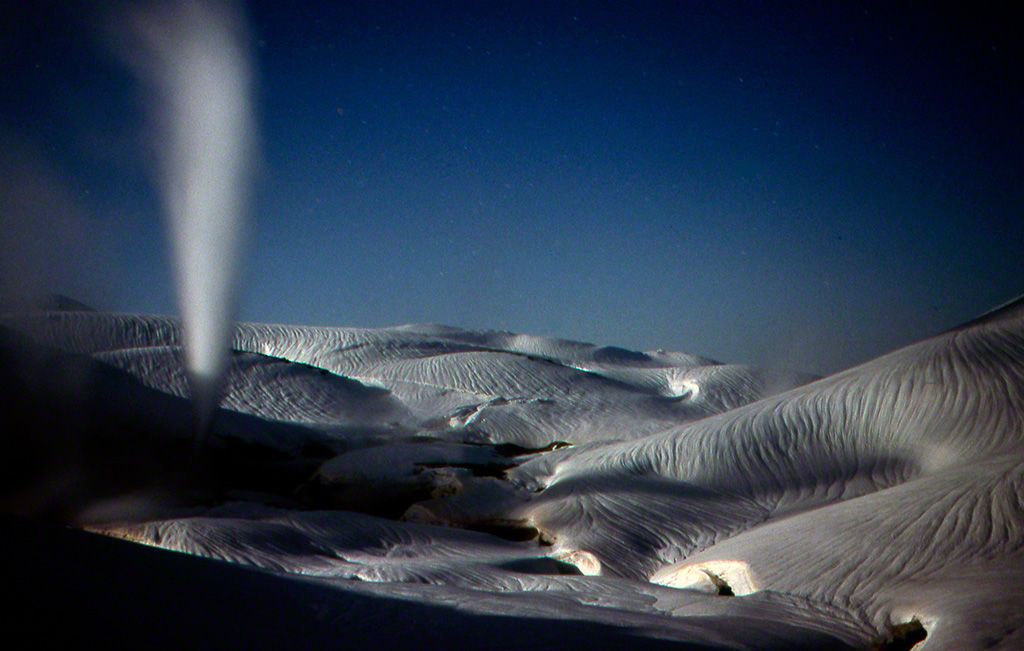 A geyser bursts from the Jigokudani valley into the moonlit sky (April). 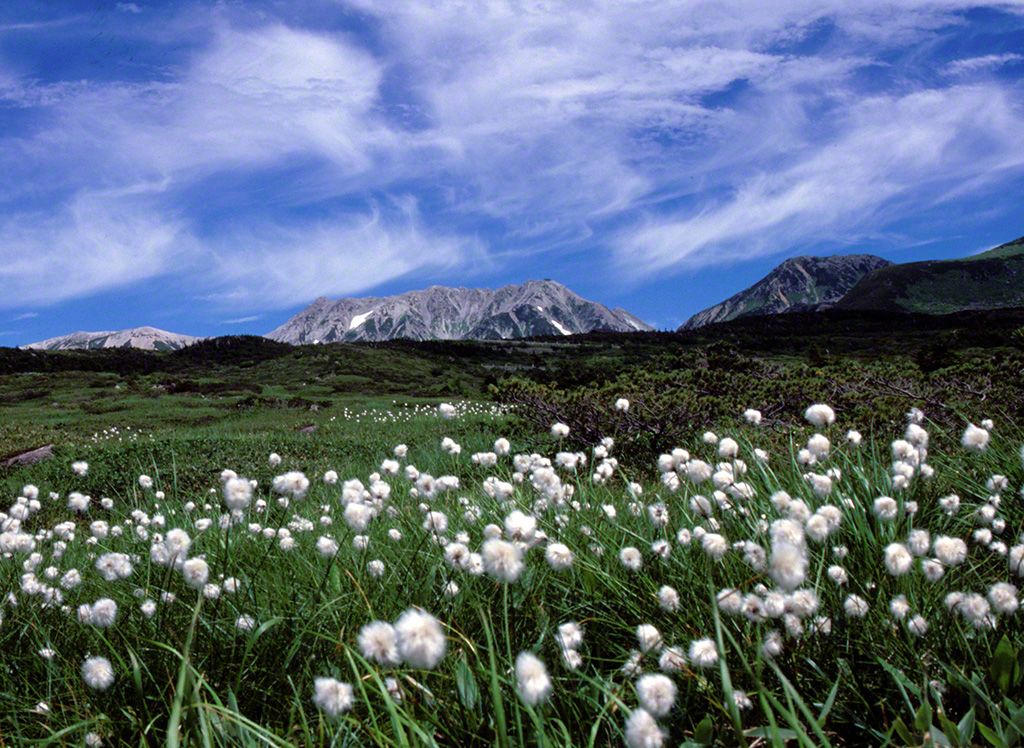 Cotton grass on the Tengudaira plain. Tateyama in the distance (July). 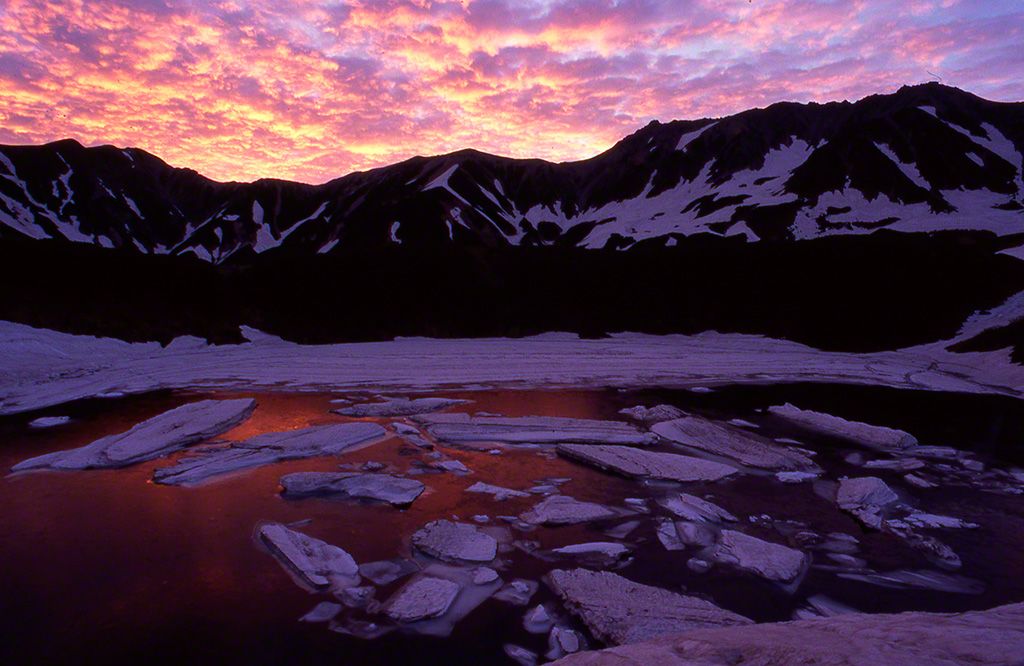 Sunrise reflecting off the waters of Mikurigaike (July). 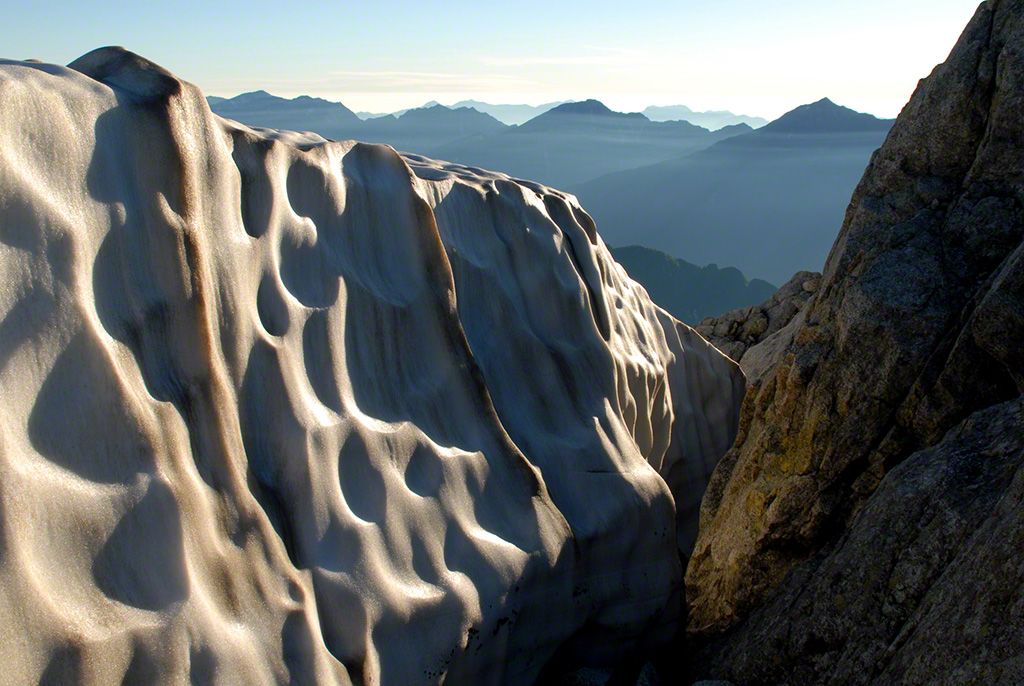 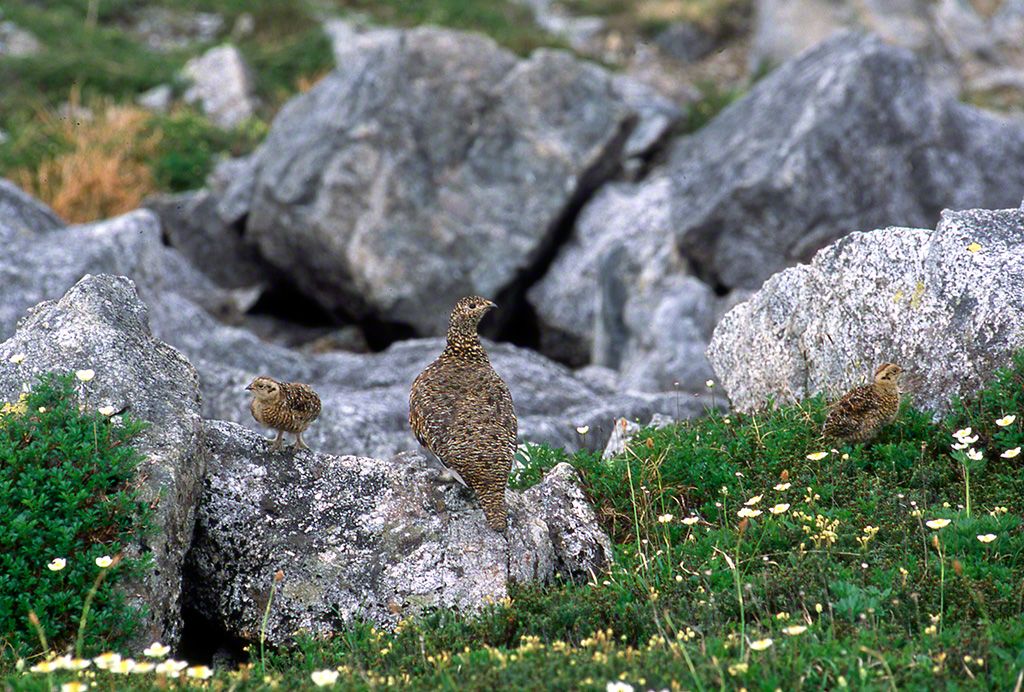 A ptarmigan and chick in summer plumage (July). 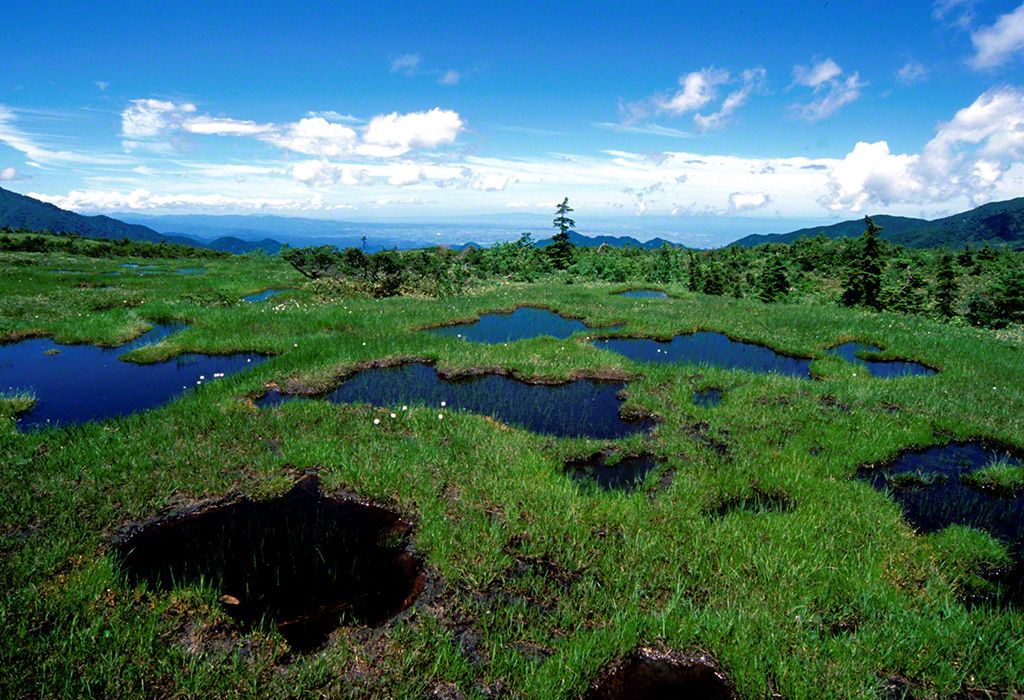 Marshes on the Midagahara plateau (July). 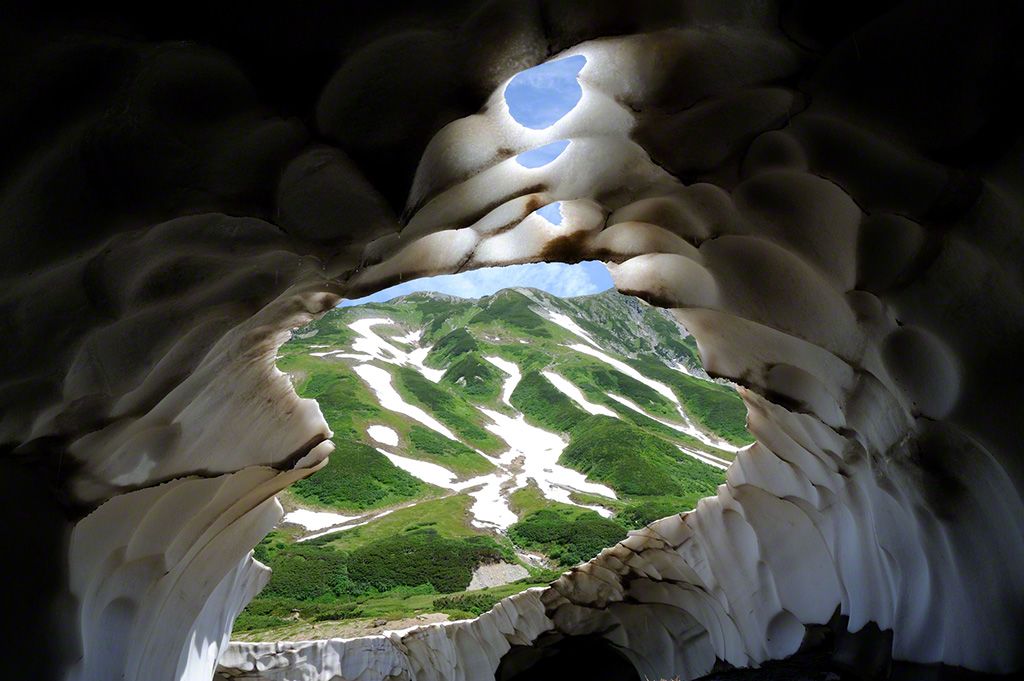 A snowy gorge in Raichōzawa (July). 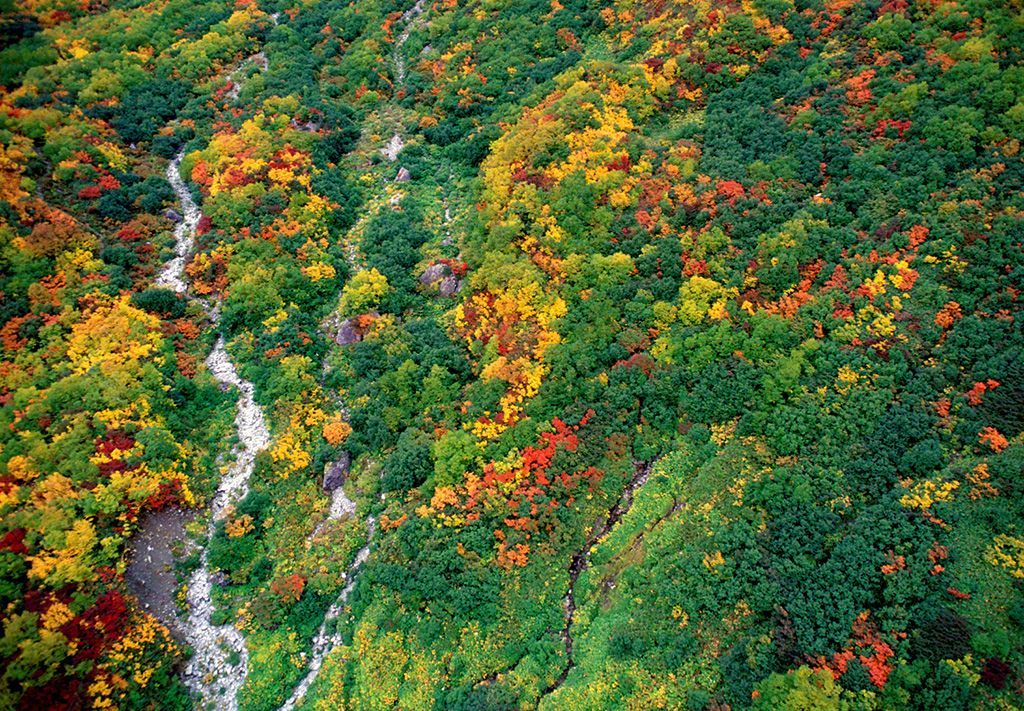 Tanbodaira in the fall (October). 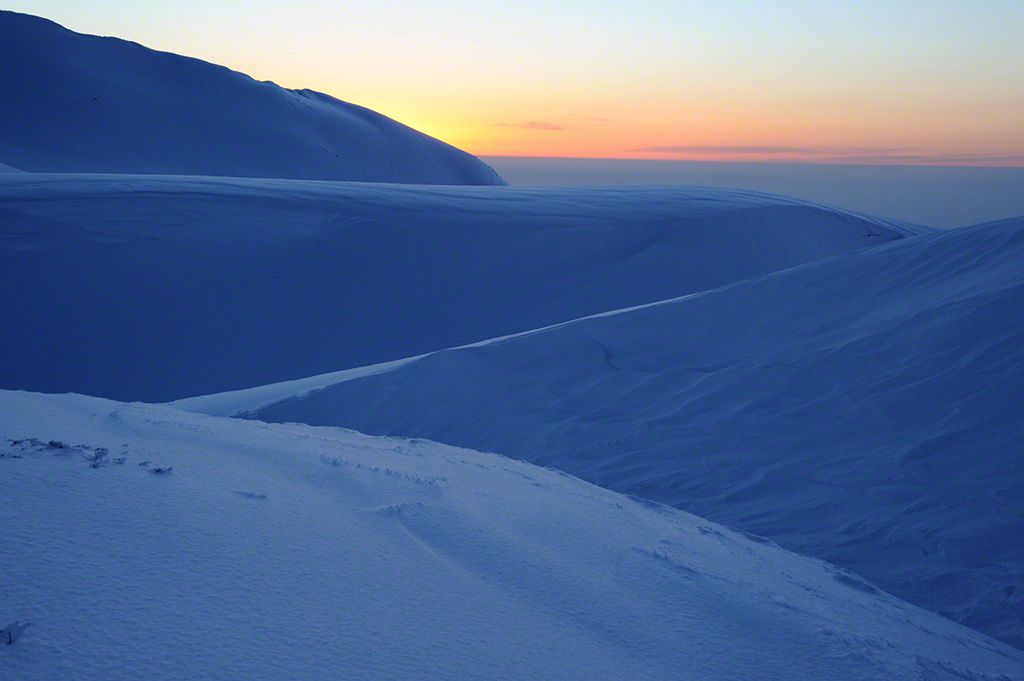 A twilight world of azure (November). 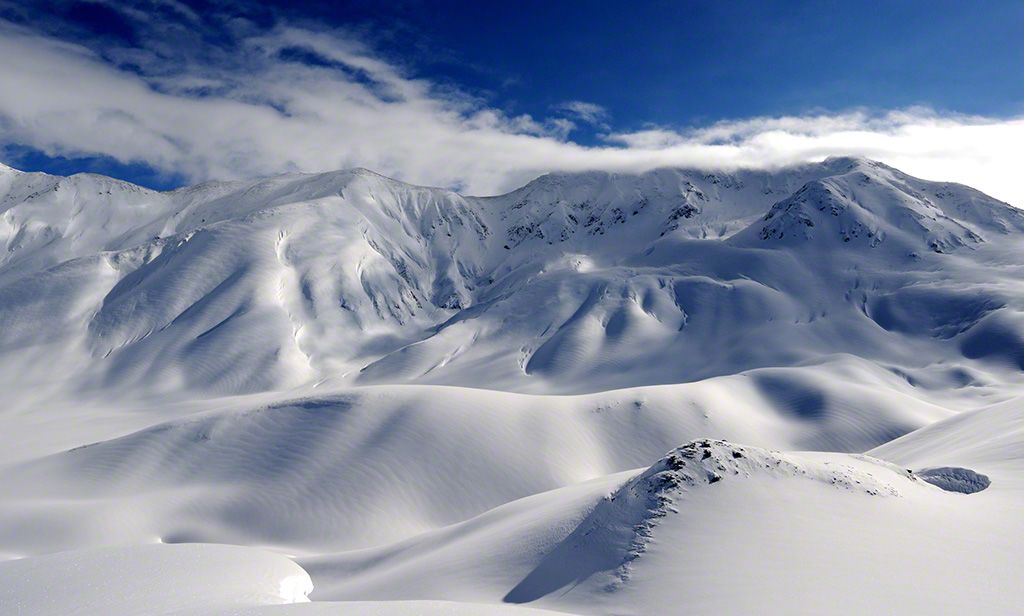 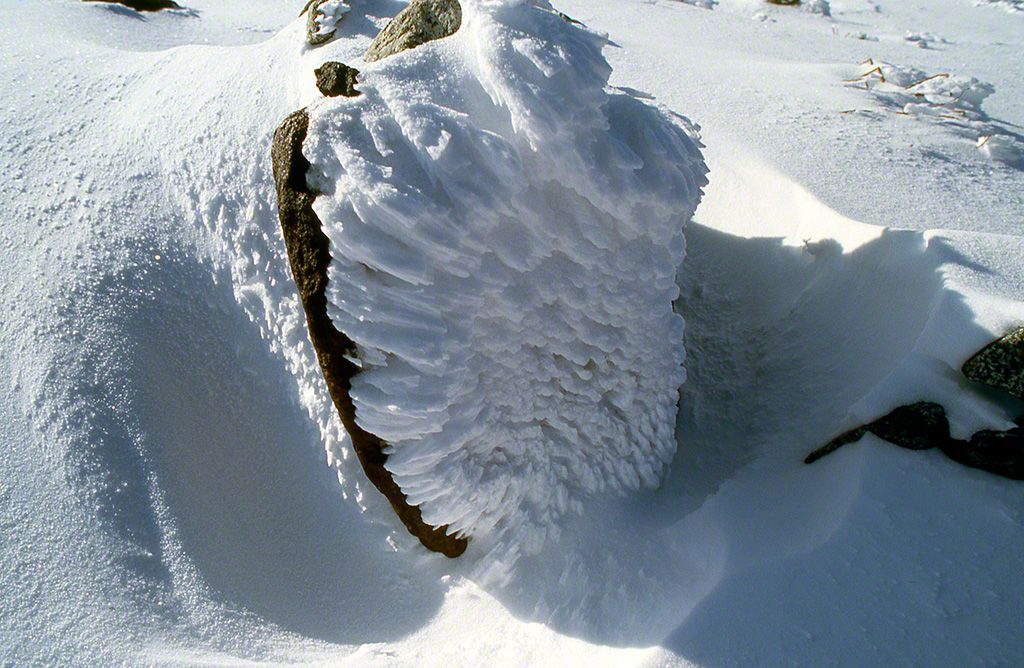 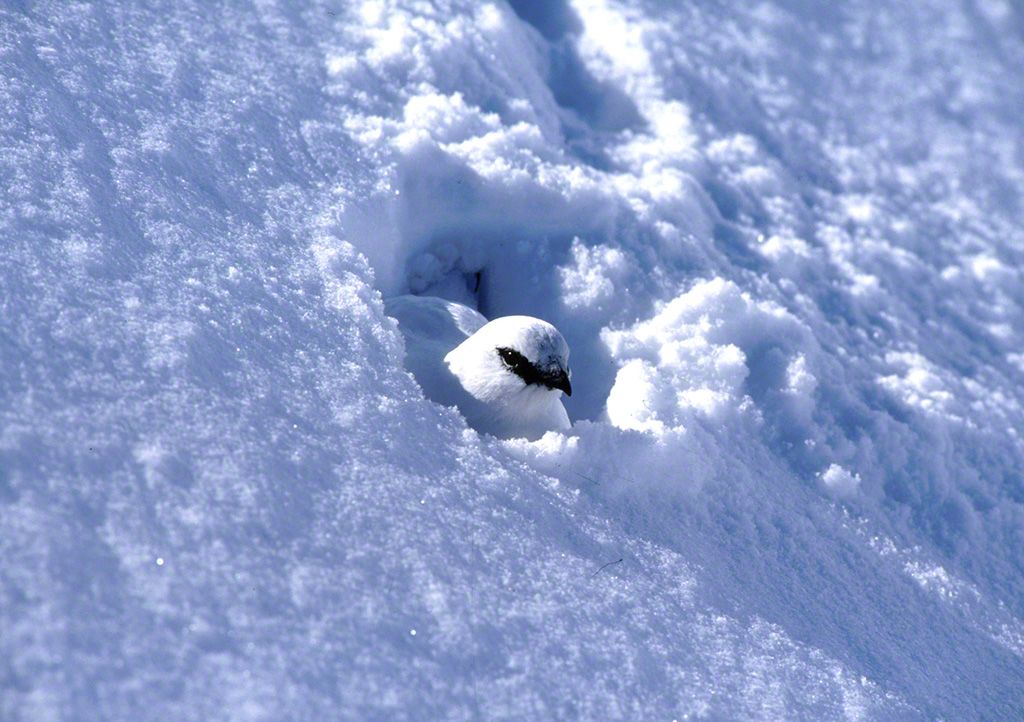 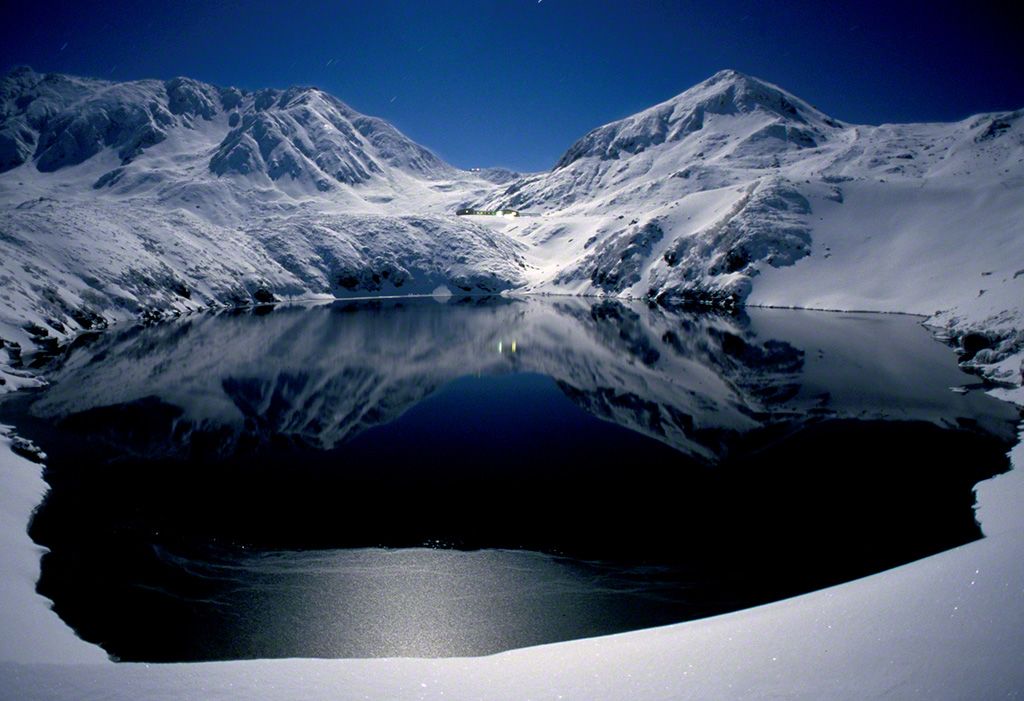 Mikurigaike in the moonlight (November). 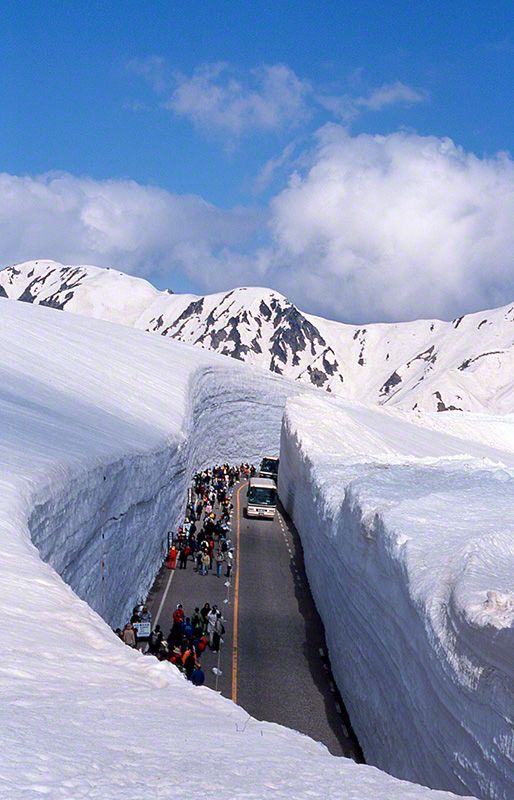 The Tateyama Kurobe Alpine Route opens every year in mid-April. Vehicles travel along a road with 20-meter walls of snow on either side. Until the beginning of June, one lane in a 500-meter section of the road is opened to pedestrians, so they can get a feel for the scale of the snowy walls around them. The region has recently become a popular destination for tourists from China, Taiwan, and South Korea.