Culture Lifestyle Oct 16, 2014
Terraced rice fields, constructed and refined by farmers over centuries, were once a common sight on Japan’s hillsides. Today, though, they are disappearing from the landscape. These photographs document the natural, agricultural, and cultural heritage of the tanada.

Terraced rice fields have been described as Japan’s pyramids, formed from the blood and sweat of the farmers who carved them into hillsides. This majestic scenery, built through centuries of unceasing efforts, cannot help but inspire respect for the labor of past generations. 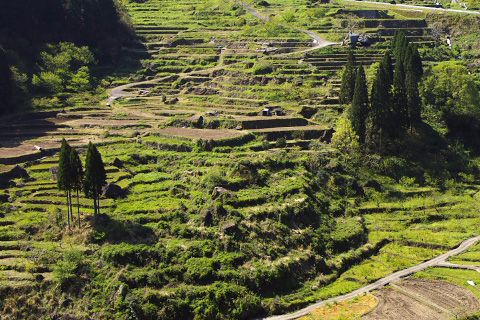 The environment surrounding these terraced fields began to change after agricultural machinery, including rice transplanters and rotary tillers, gained popularity in the 1960s, making possible higher yields in combination with chemical fertilizers and pesticides. As large agricultural vehicles were not easily adapted to tanada, the fields were often abandoned as unsuitable for cultivation. The aging of farmers and their difficulty in finding successors accelerated the decline. Where once it was possible to see beautiful terraced rice fields anywhere you went in the country, they were soon rapidly disappearing—and attracting little interest from the Japanese population as they did.

I decided to photograph the rice fields as a record of this vanishing landscape. In the more than 10 years I have been shooting tanada around the country, I have come to realize their role in connecting people with nature as vibrant centers of production.

Farmers’ Love for Their Fields

My first eye-opening experience came at a Dondoyaki fire festival in Matsunoyama, now part of the city of Tōkamachi in Niigata Prefecture. At Koshōgatsu (Little New Year) in mid-January, villagers set fire to tall piles of straw as a New Year offering to the deity of the fields. They then drink sake together around the fire and pray for a bumper harvest in the coming year. 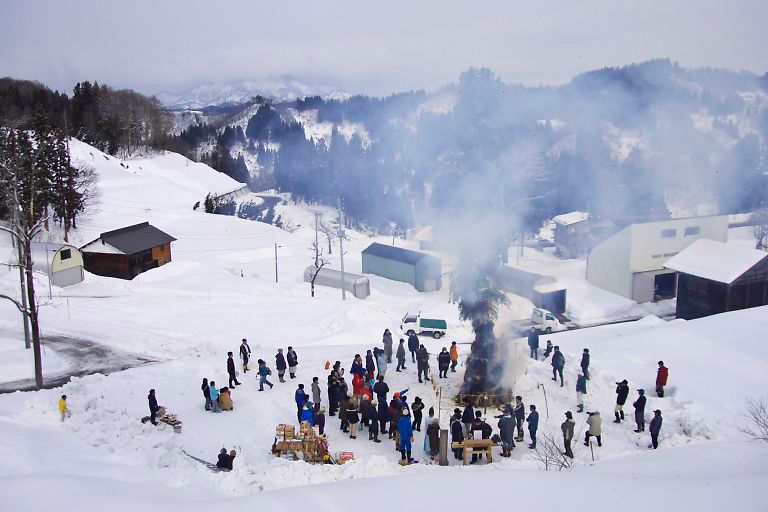 Praying for bountiful crops at the Dondoyaki fire festival.

This was in “snow country,” so the fields were covered in several meters of snow and falling flakes were swirling in the harsh, bone-chilling winds. Many of the gathered villagers were elderly, but they were all full of life. There was no end to the talking and laughter. Even though it was still months before work would begin, they had all come out to pay their respects to the local kami. This is not something you would do if you hated working in the fields.

In early spring, fieldwork begins with the sprouting of rice seedlings. Farmers select rice seeds, sterilize them, and soak them in lukewarm water to bring about germination. Around the same time, they loosen soil by turning up the ground, repair boundaries, and flood and level the fields. Next, they take the seedlings from the seedbed and plant them in the fields. From planting to harvest in autumn, the farmers go out every day without fail to weed, trim surrounding vegetation, manage the water, and do any other necessary jobs. 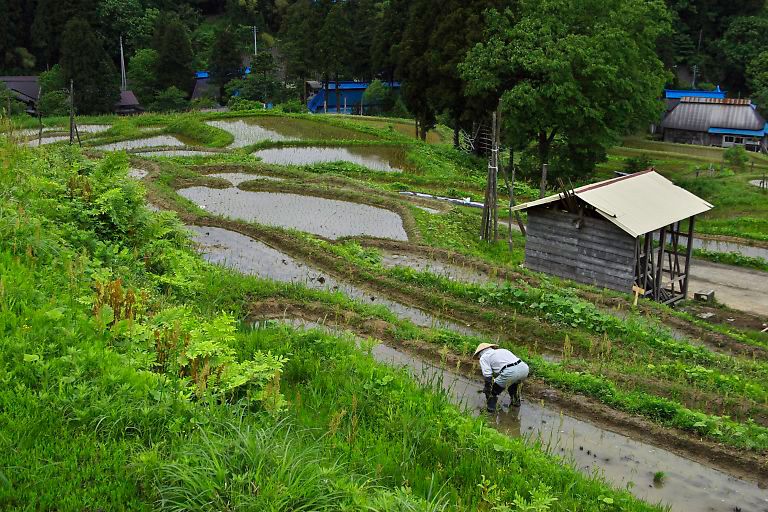 Many of those responsible for heavy farm work are elderly, but they do not treat it as a hardship.

As most of the labor in terraced fields is done by hand, it is said to take about five times as long as in flat areas. Naturally, it is not only a question of time but also of backbreaking physical effort for elderly farmers. However, when you see the active figures of the people working, it appears that they genuinely seem to enjoy it. One farmer has retired so that his son can take over, but still goes out into the fields. He gripes about the tough labor, but his son later tells me quietly: “If he didn’t work in the fields, he wouldn’t feel like he was alive.”

Rediscovering the Value of the Terraces

Fortunately, in the last few years Japanese people have started to discover new value in the country’s tanada. Their role is not simply as places to grow rice. They also help prevent landslides by temporarily containing heavy rainfall, preserve the natural environment and biodiversity, and maintain Japan’s scenic beauty. This versatility demonstrates their importance beyond productivity alone. 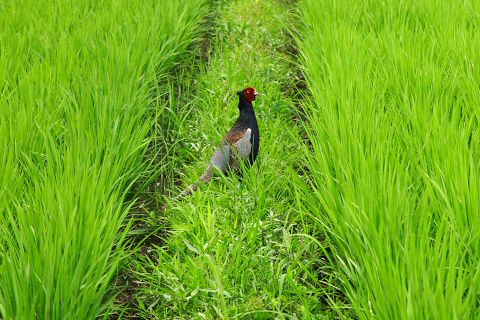 Terraced paddies are home to a variety of wildlife, like this Japanese pheasant.

Movements to preserve terraced rice fields based on their diverse advantages are gaining traction. The government supplies subsidies for tanada preservation. Nongovernmental efforts include introduction of field ownership and other systems to increase citizen involvement in rice farming, as well as campaigns focusing on the scenic beauty of the fields as tourist destinations. Having met the people who work in them, I firmly believe that Japan’s terraced rice fields will live on, though they may diminish in number. 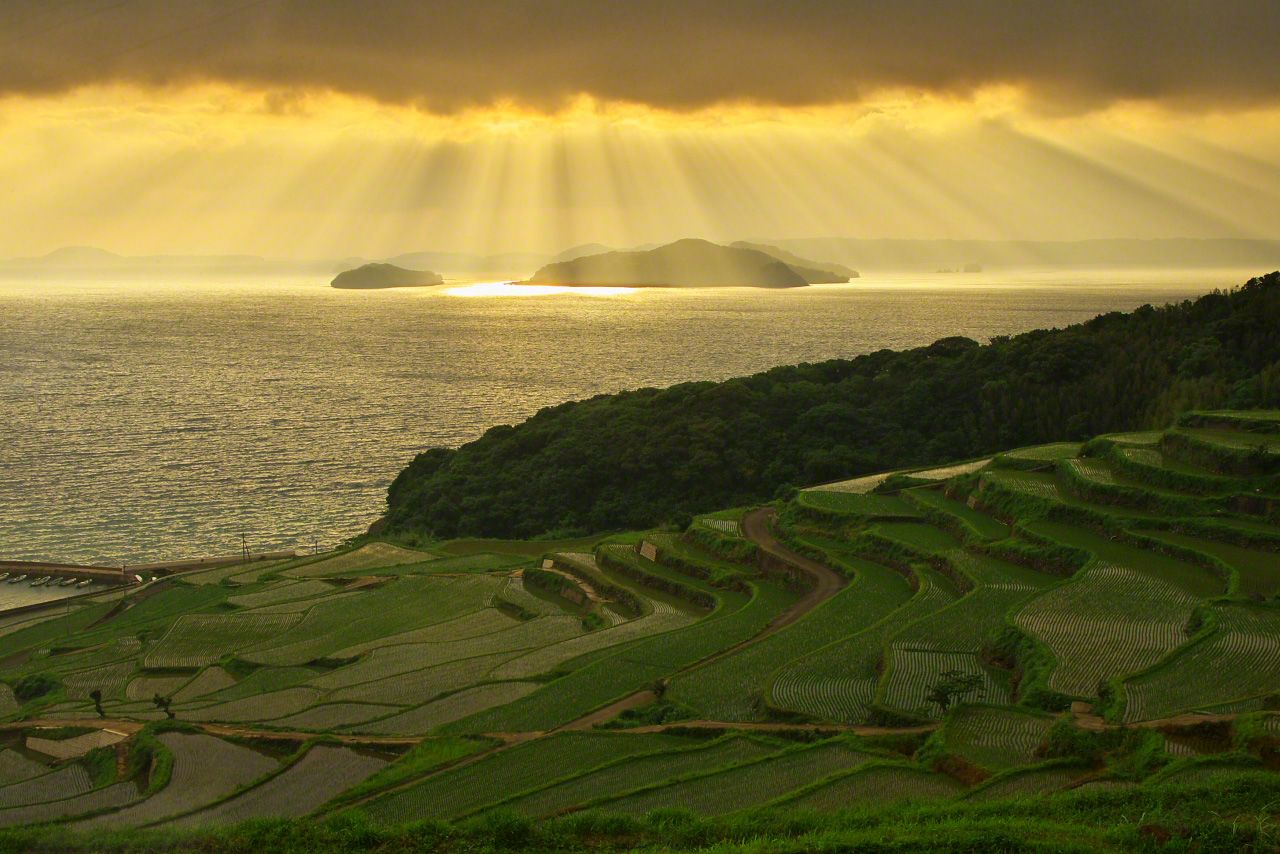 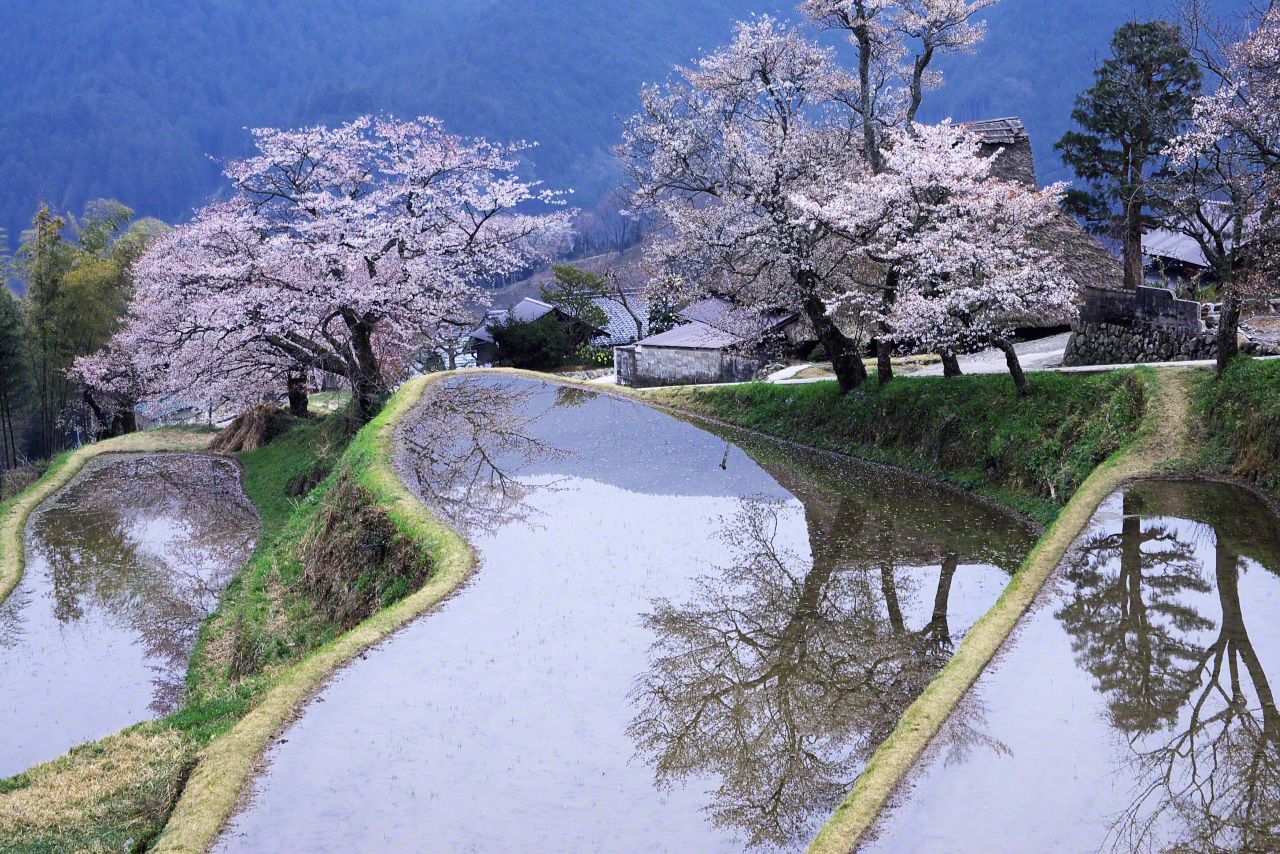 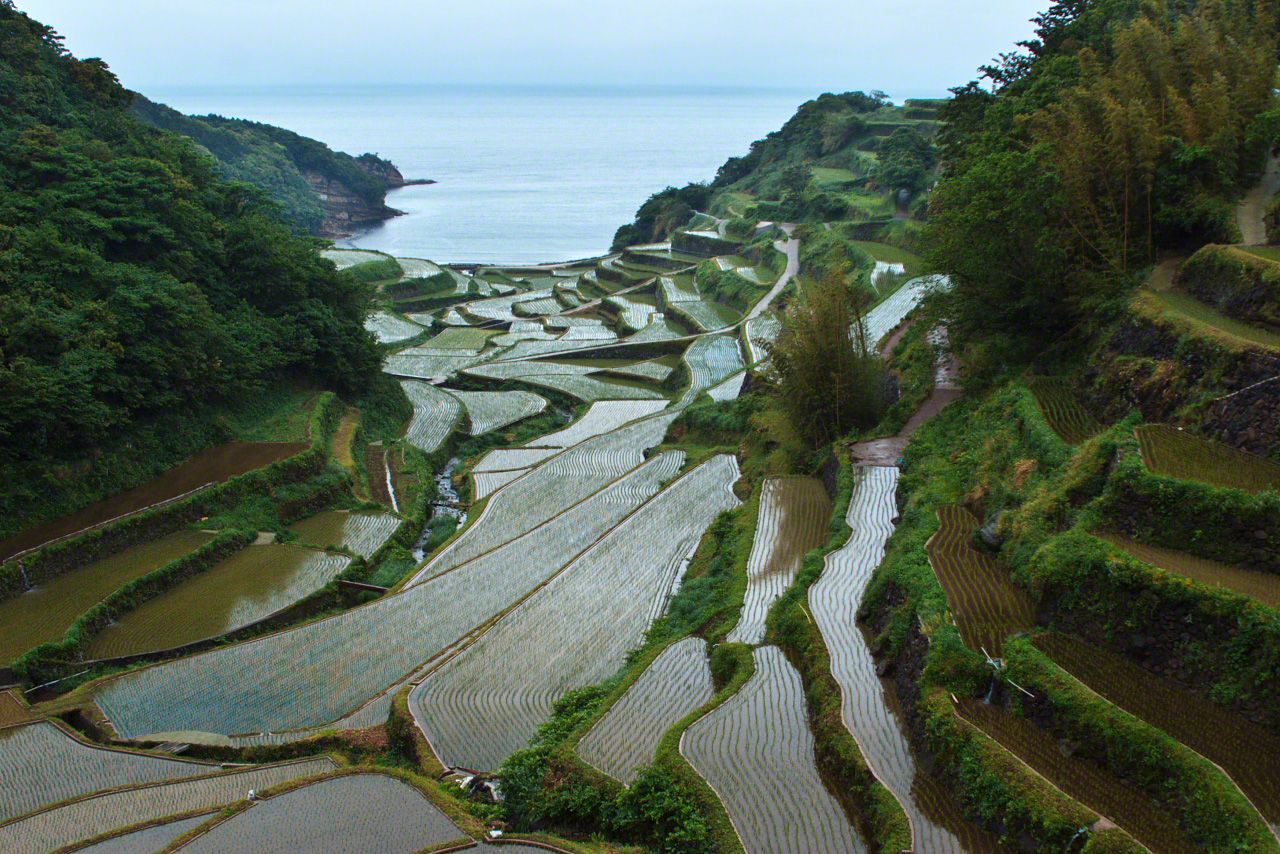 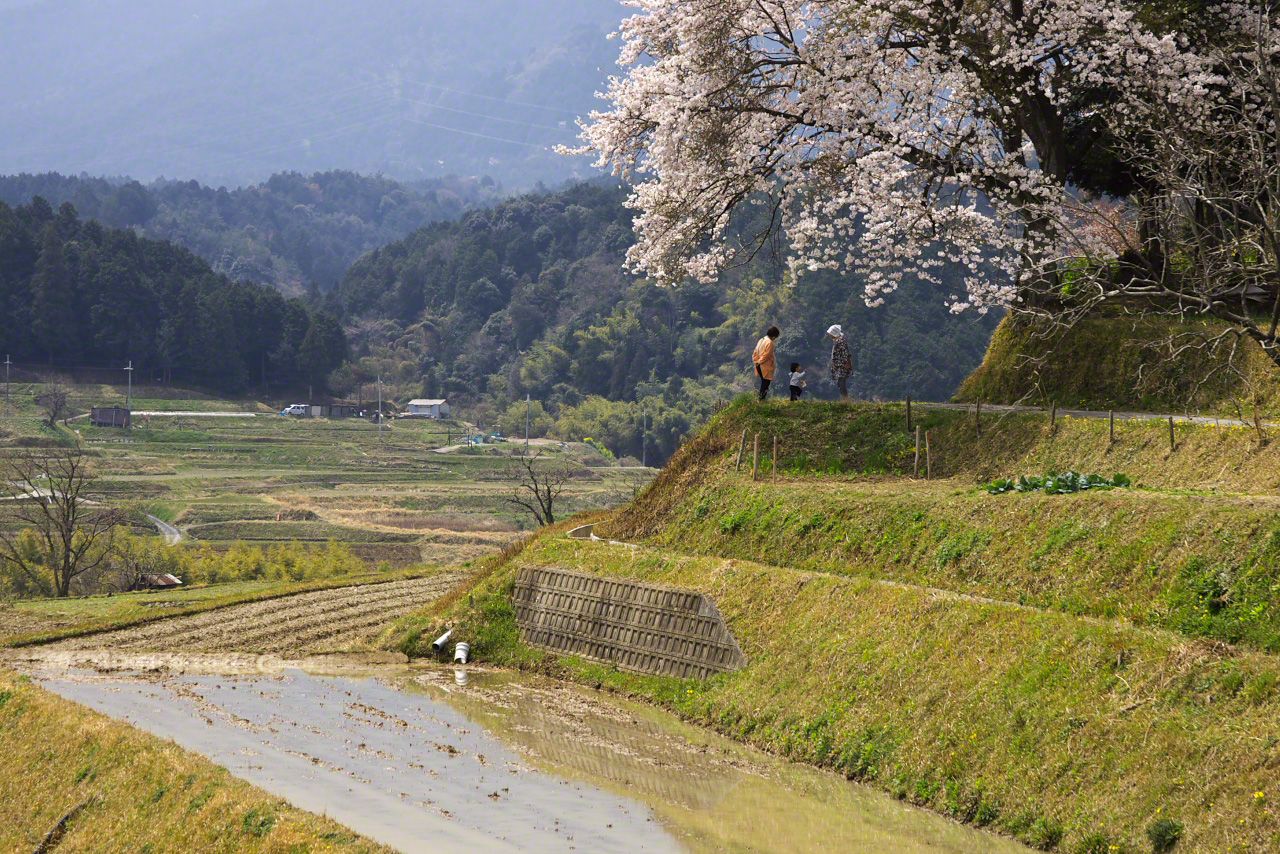 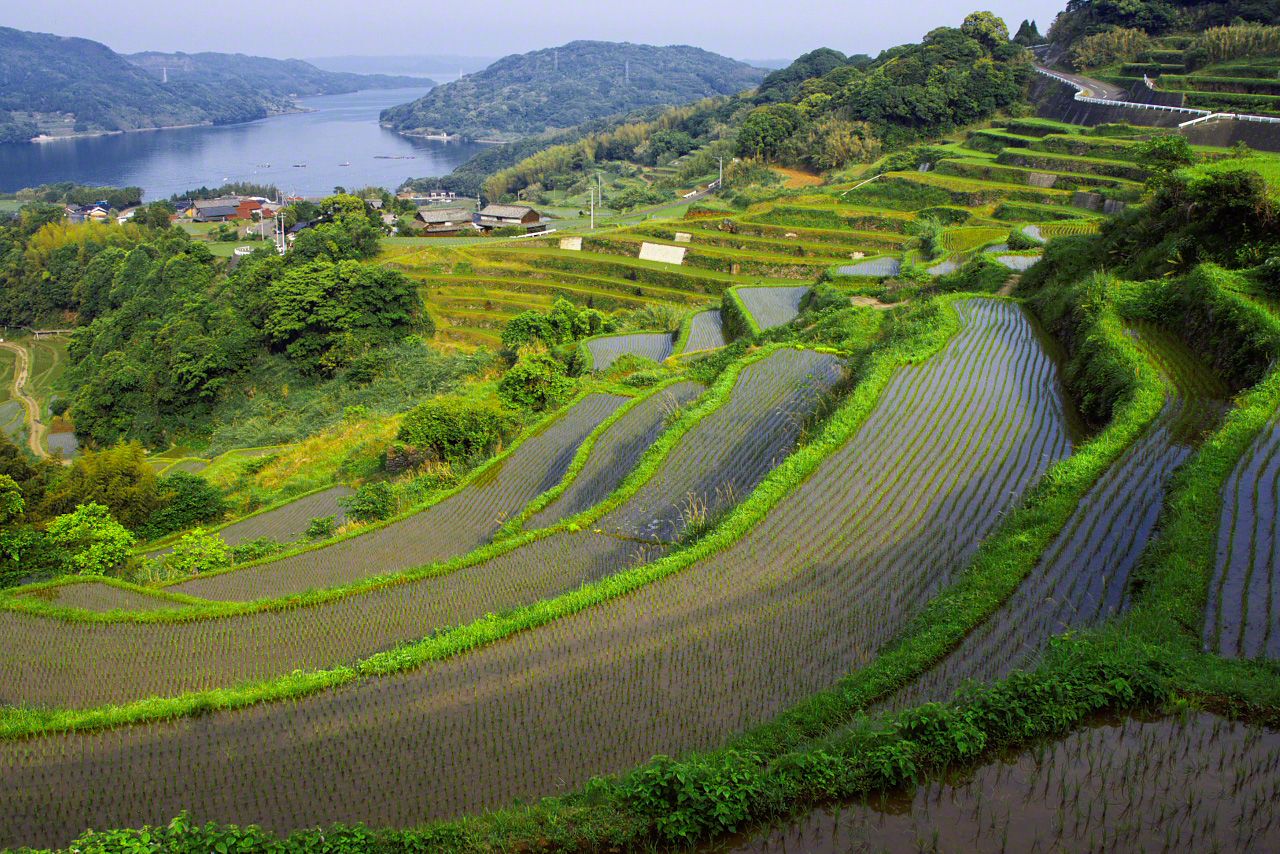 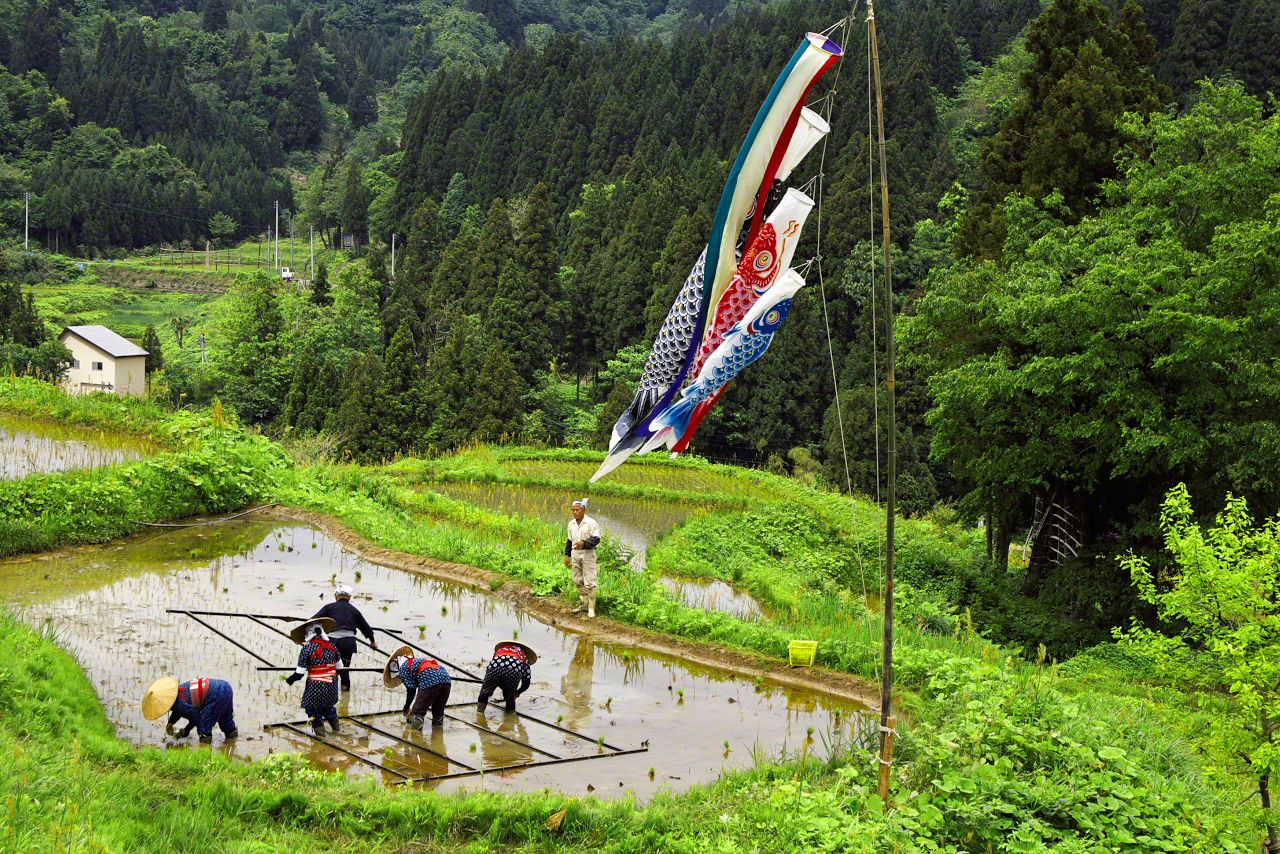 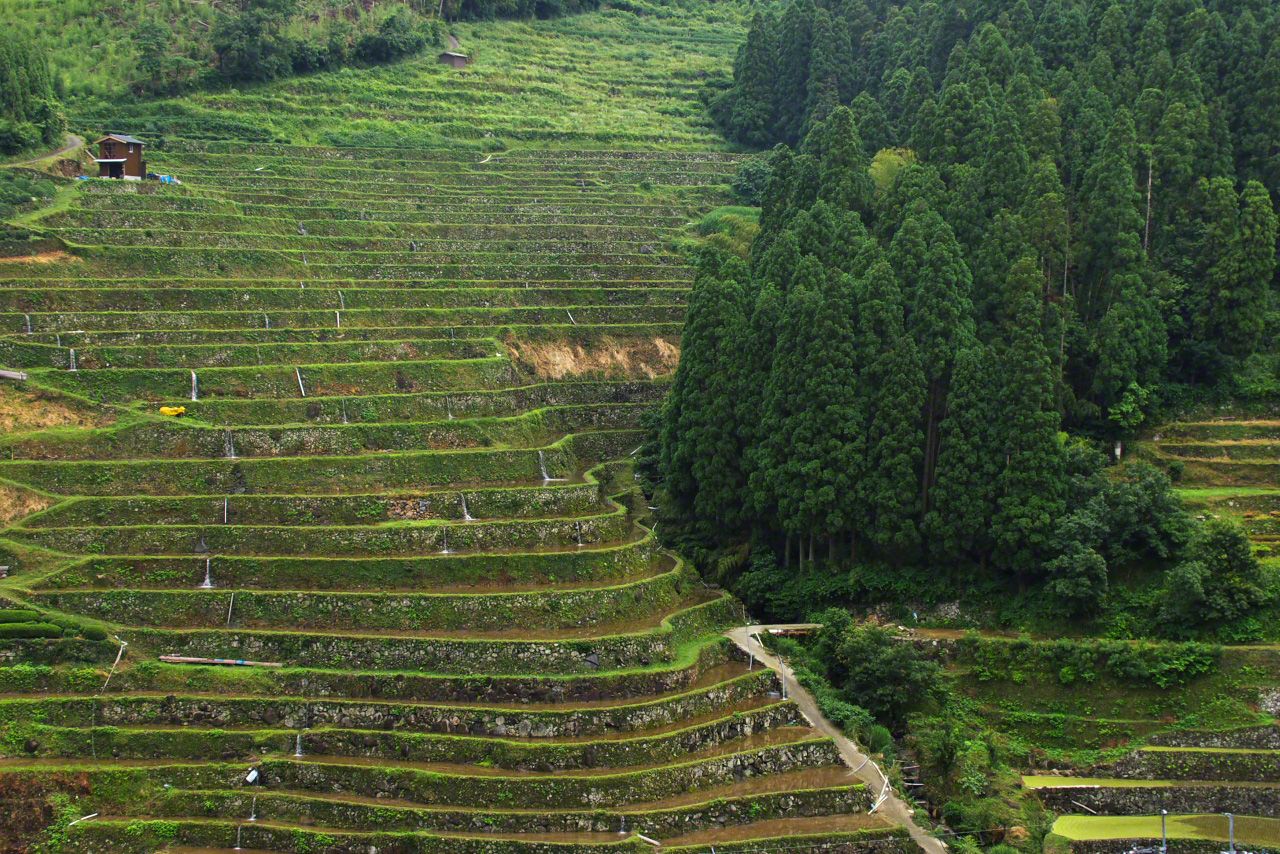 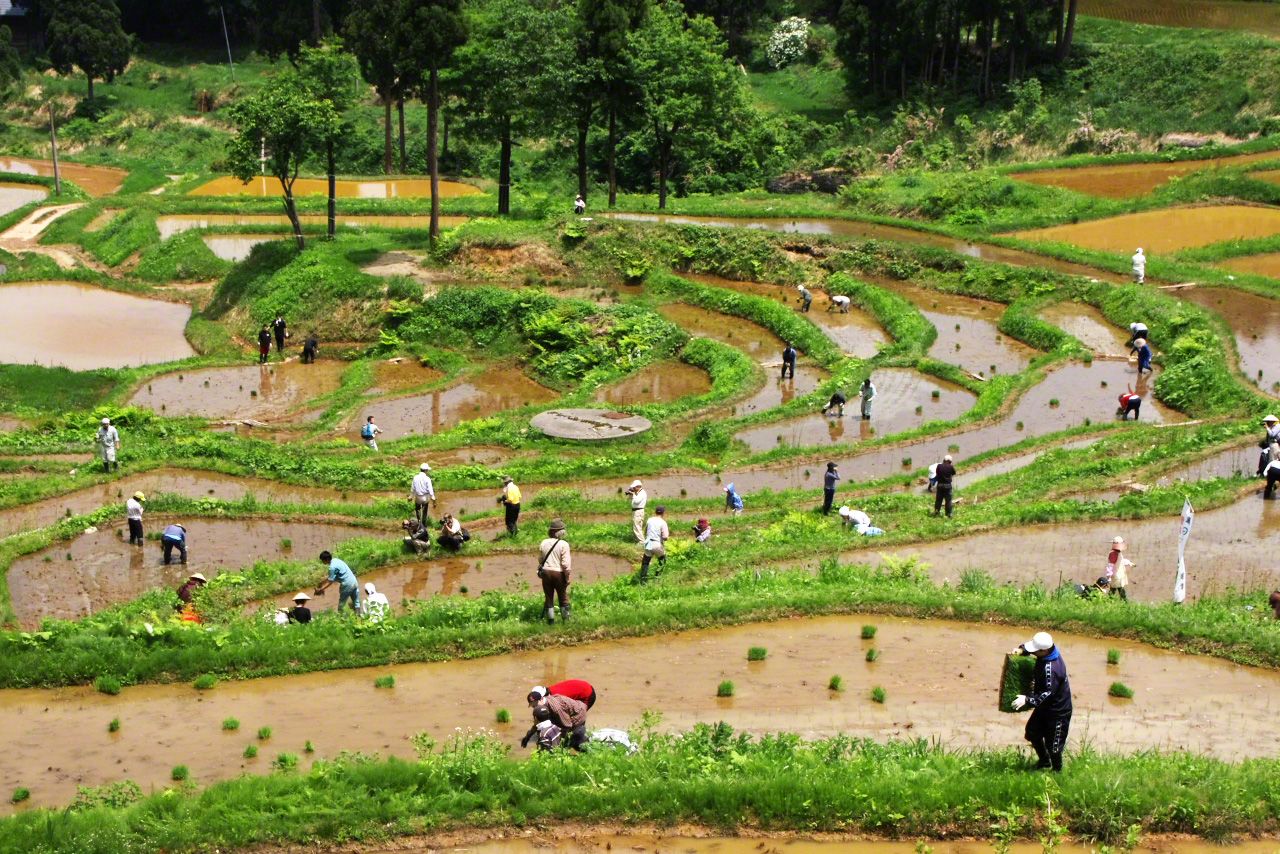 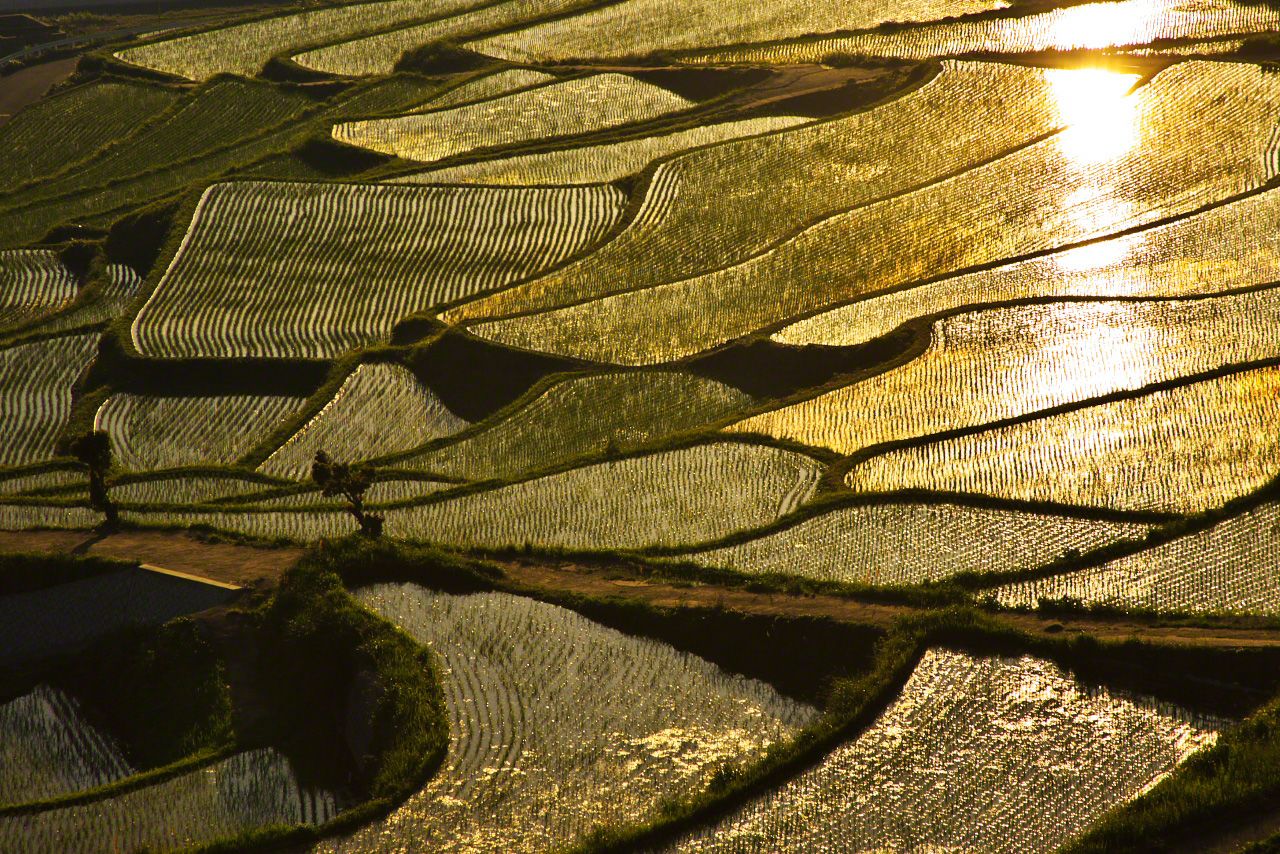 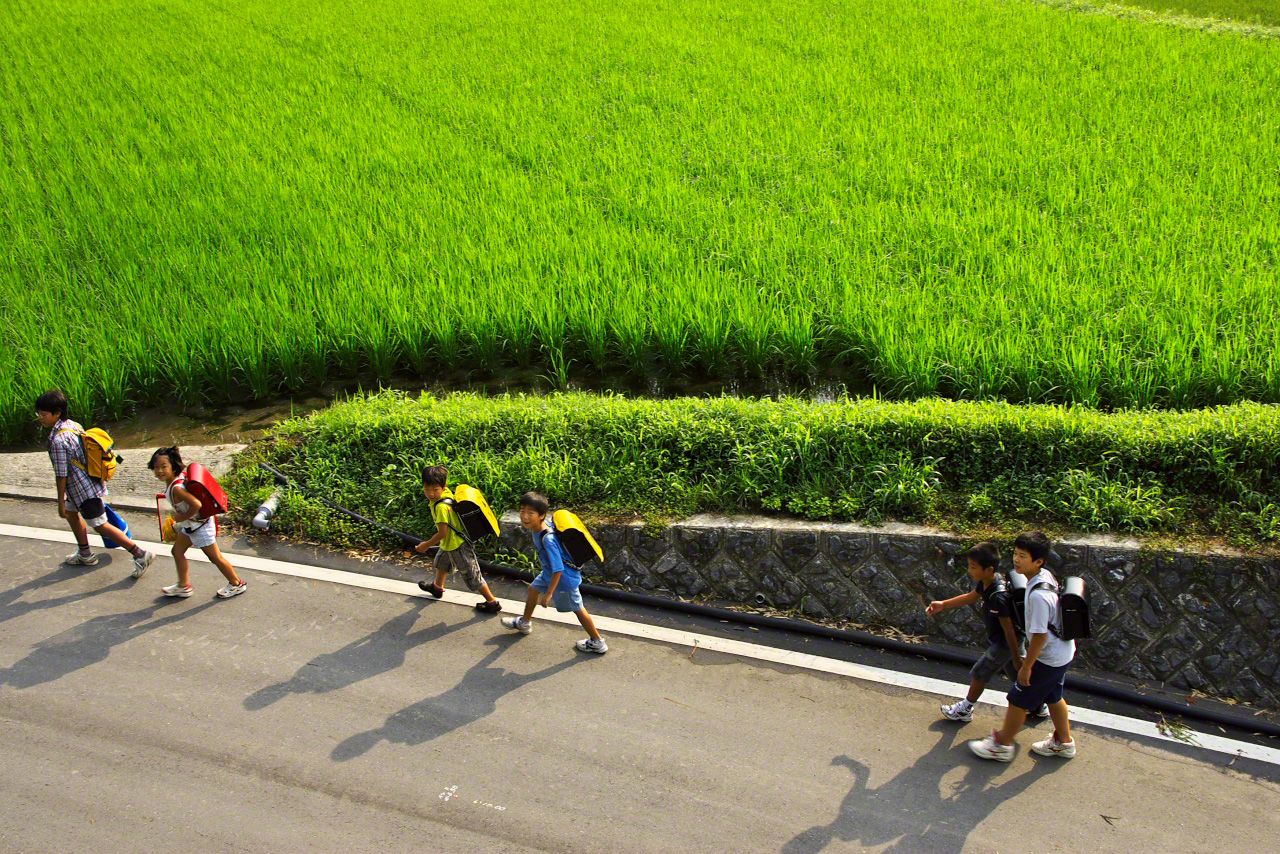 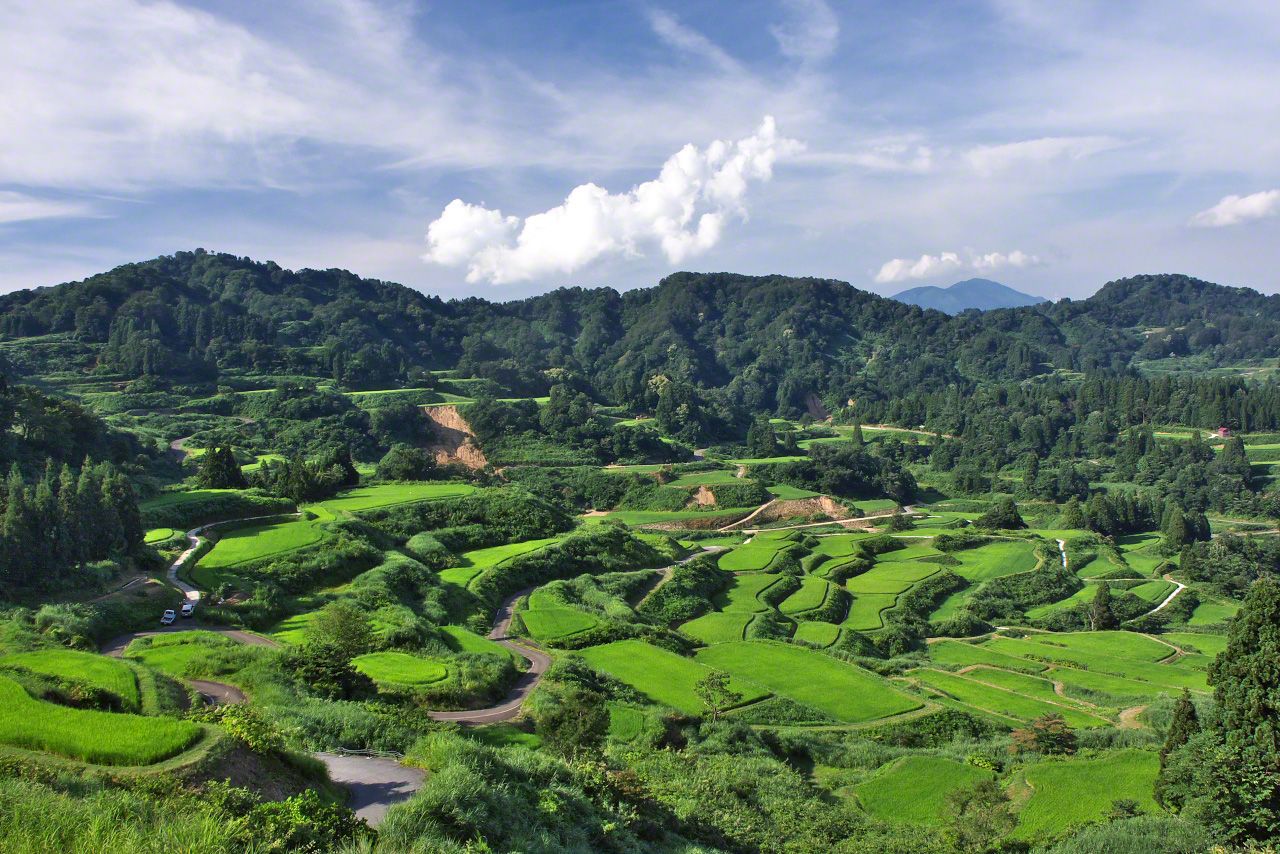 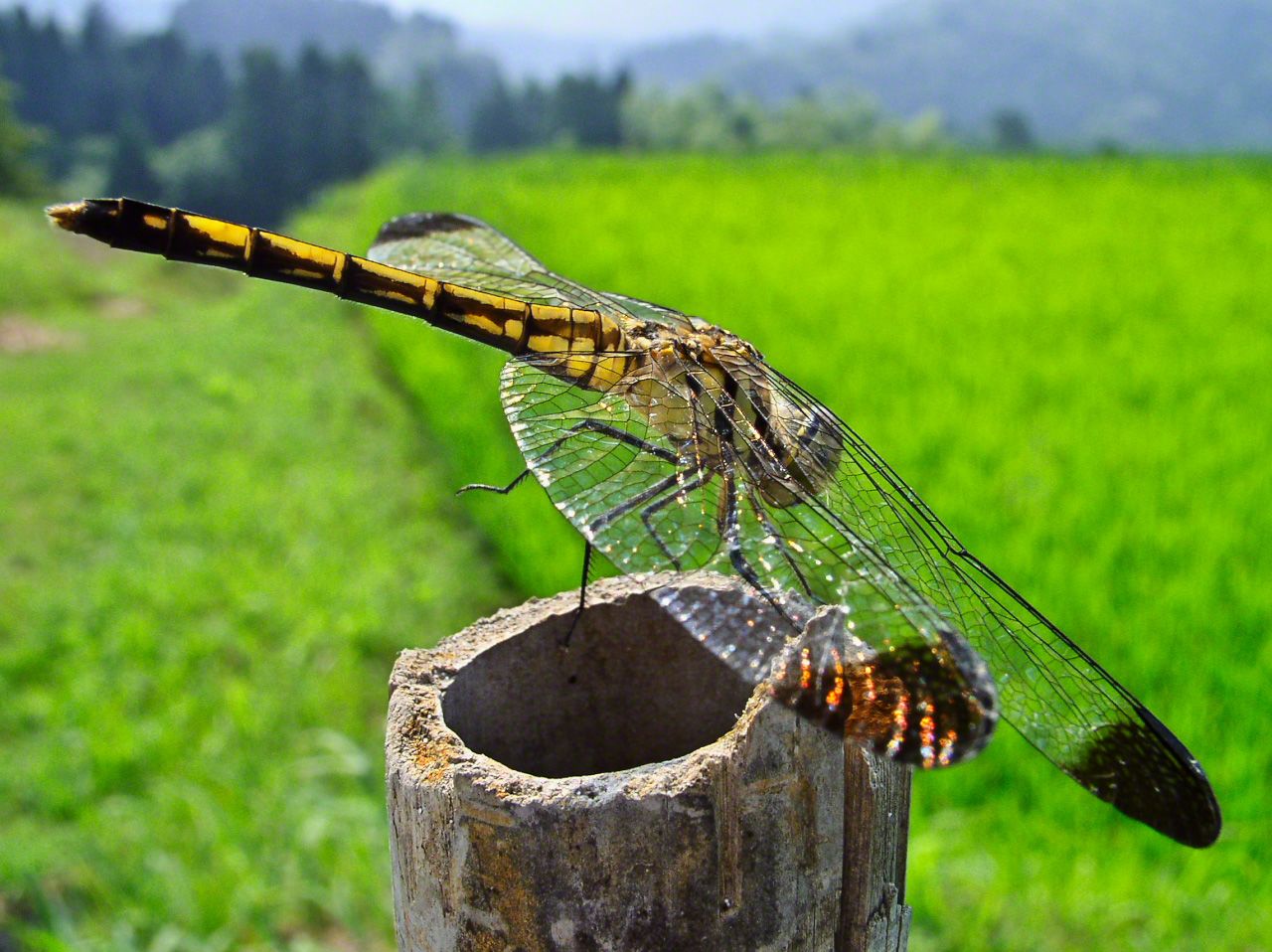 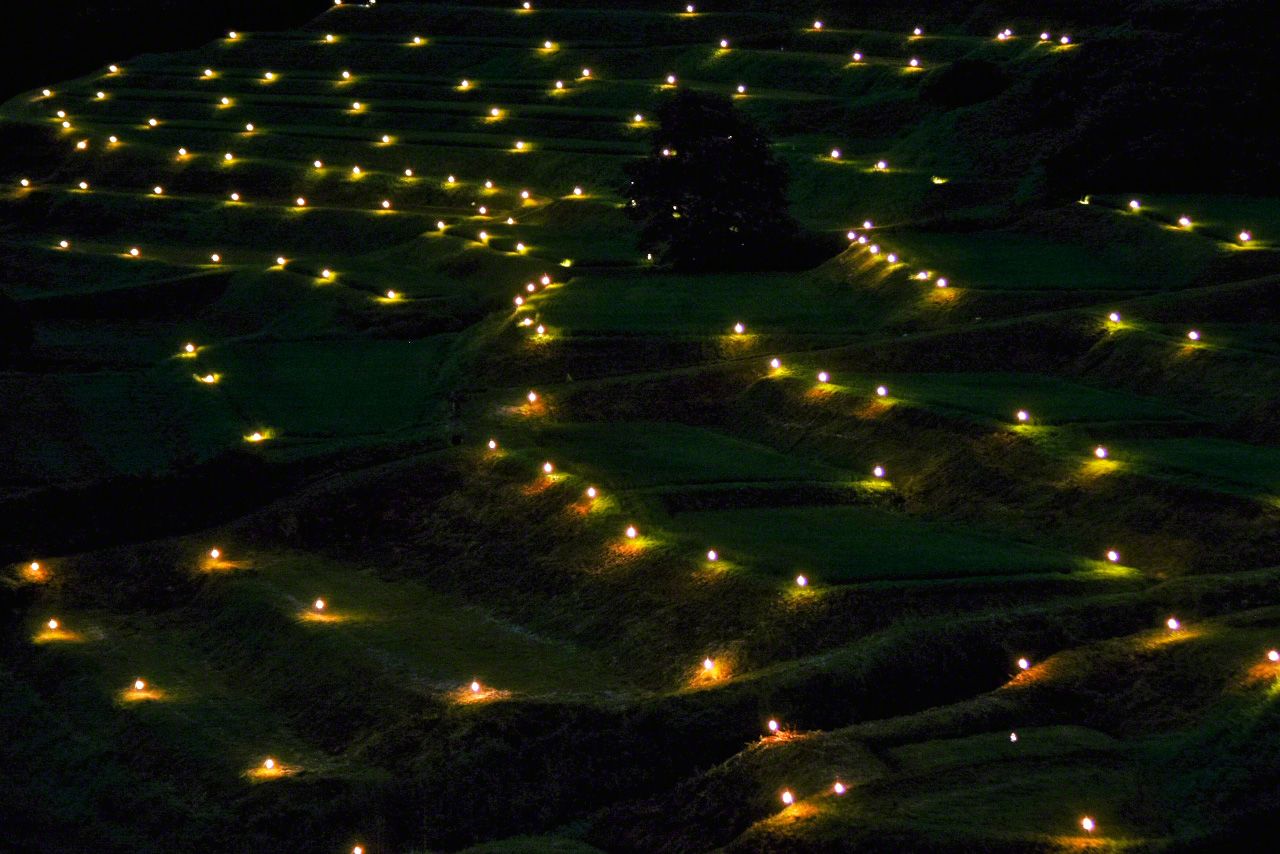 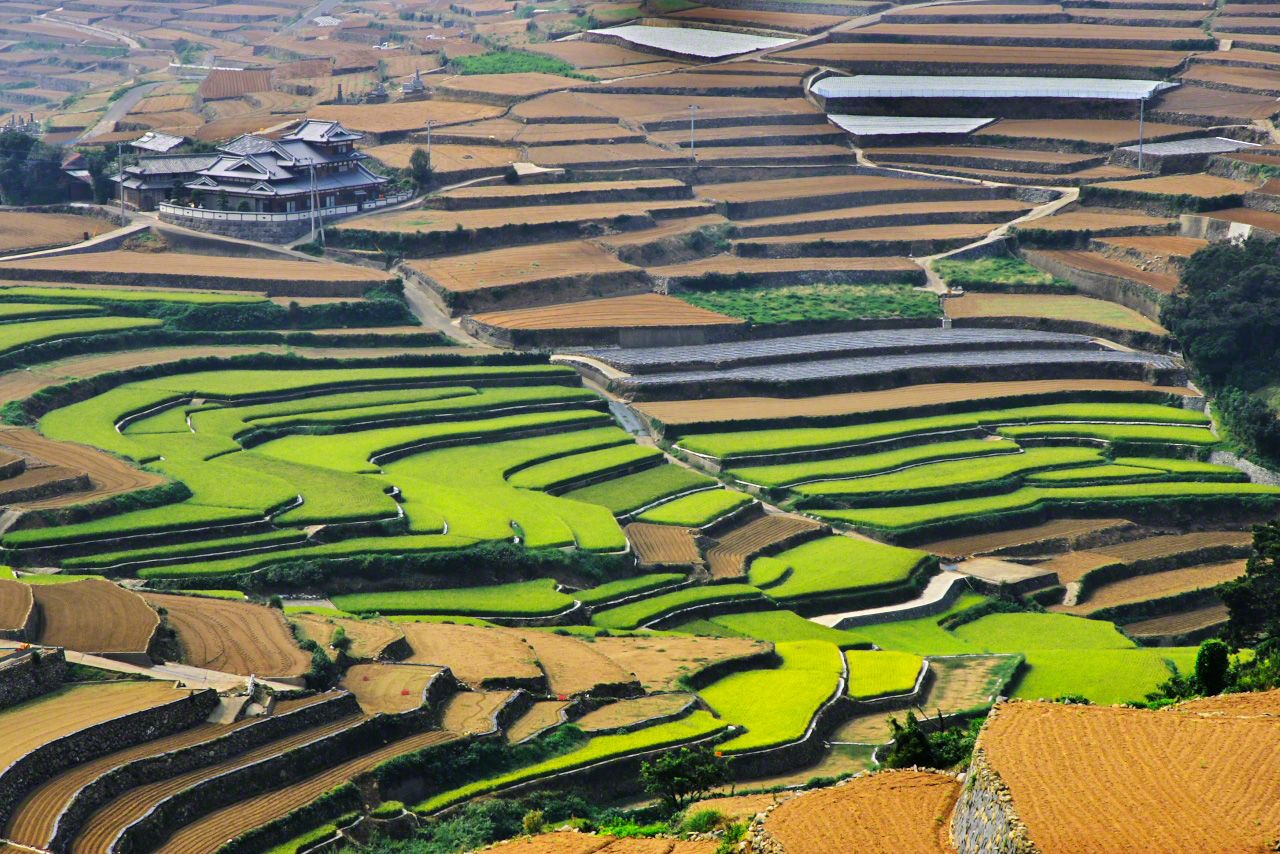 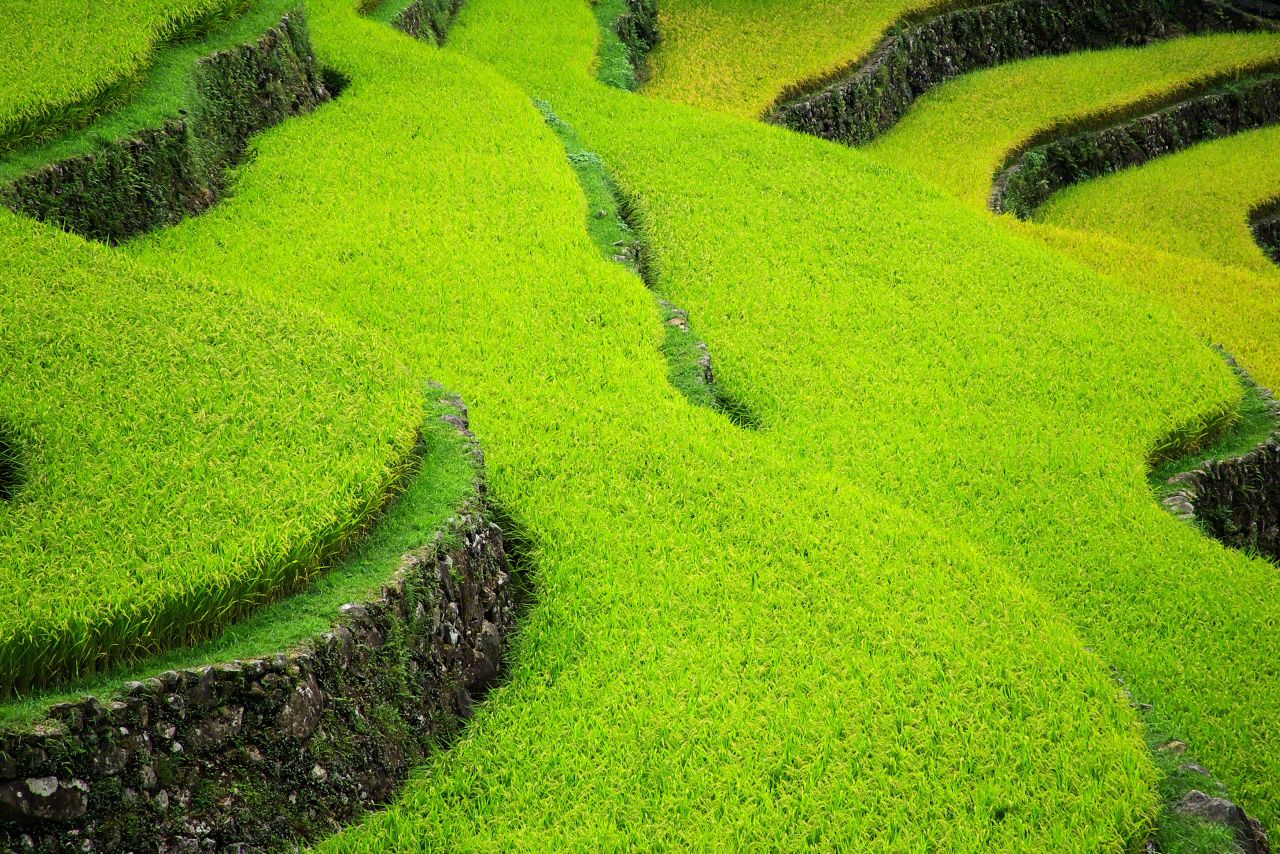 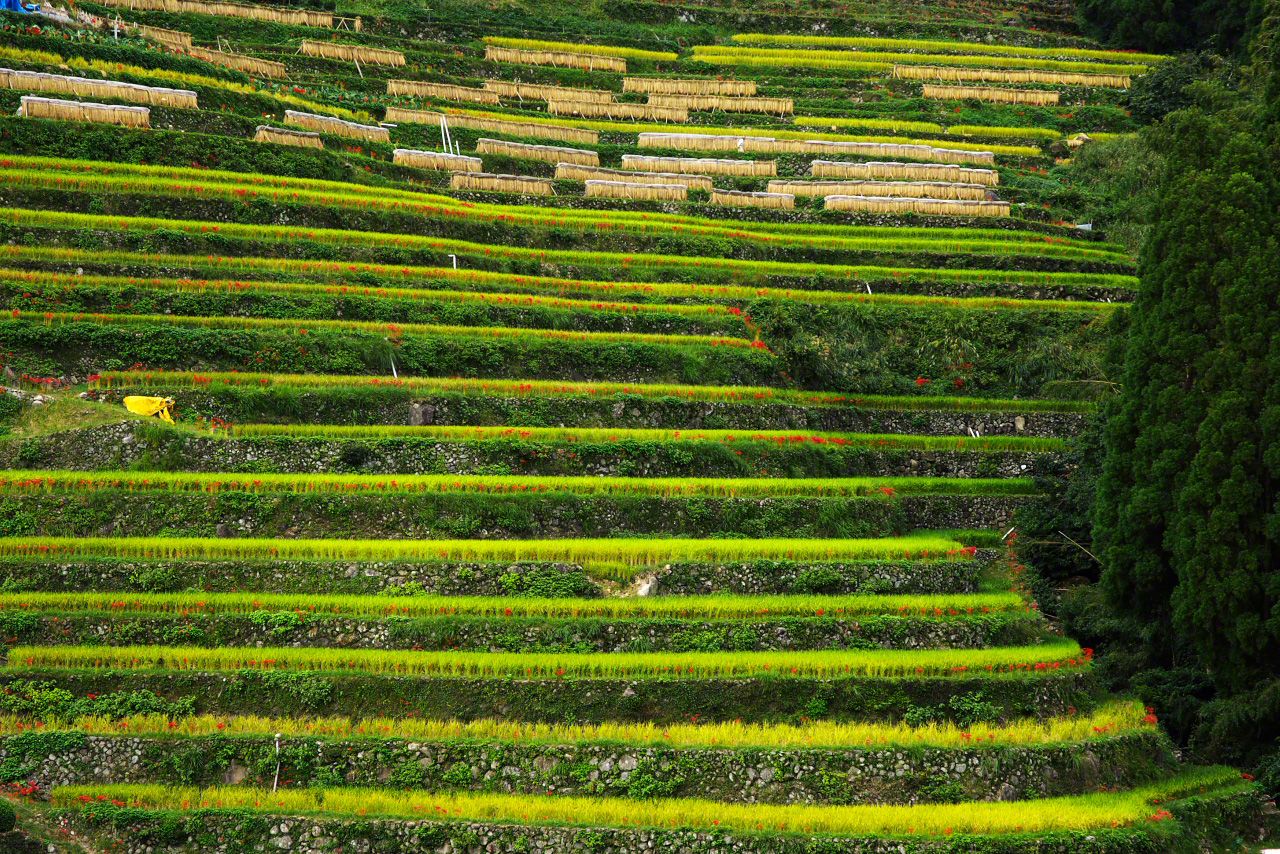 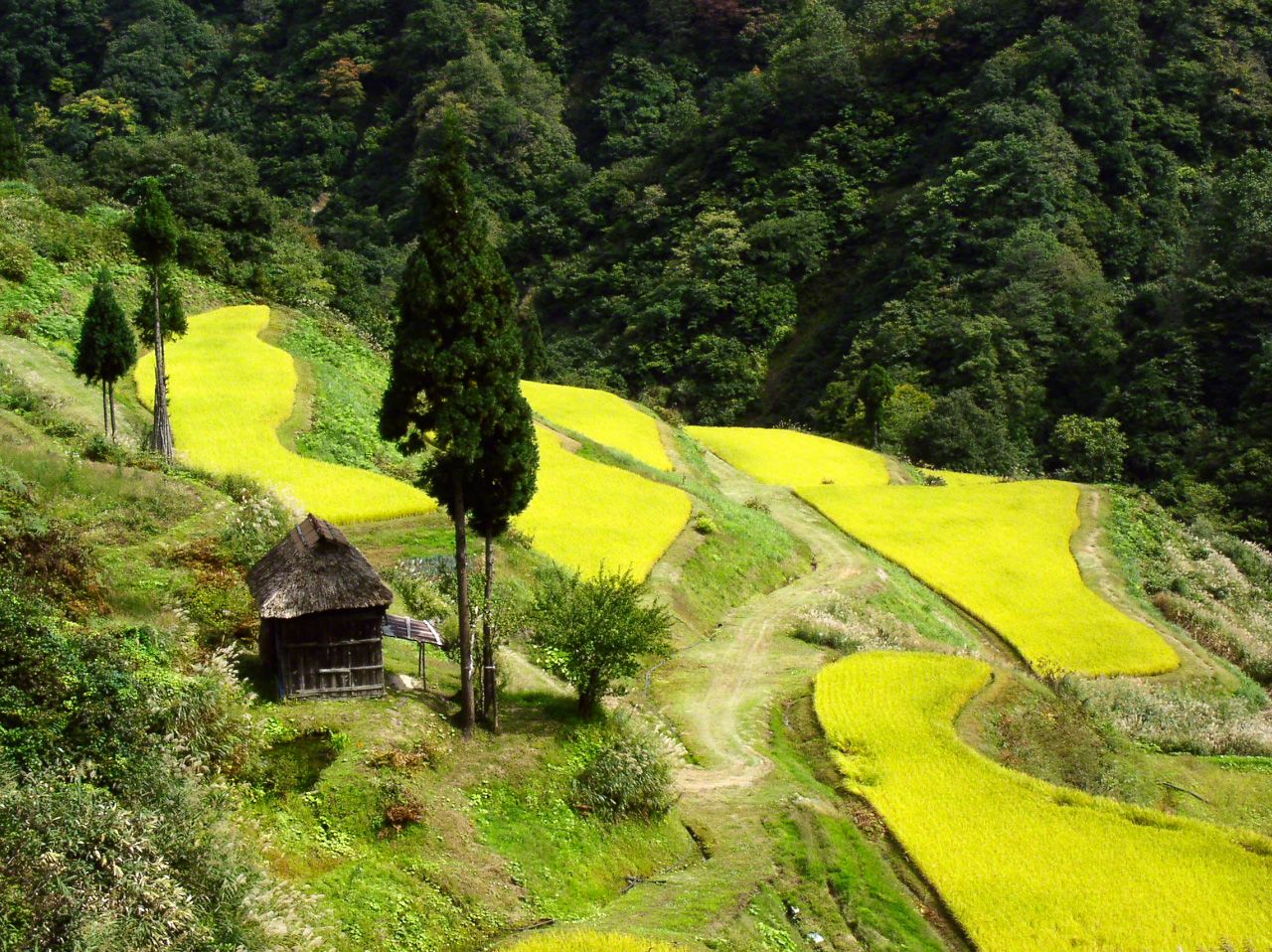 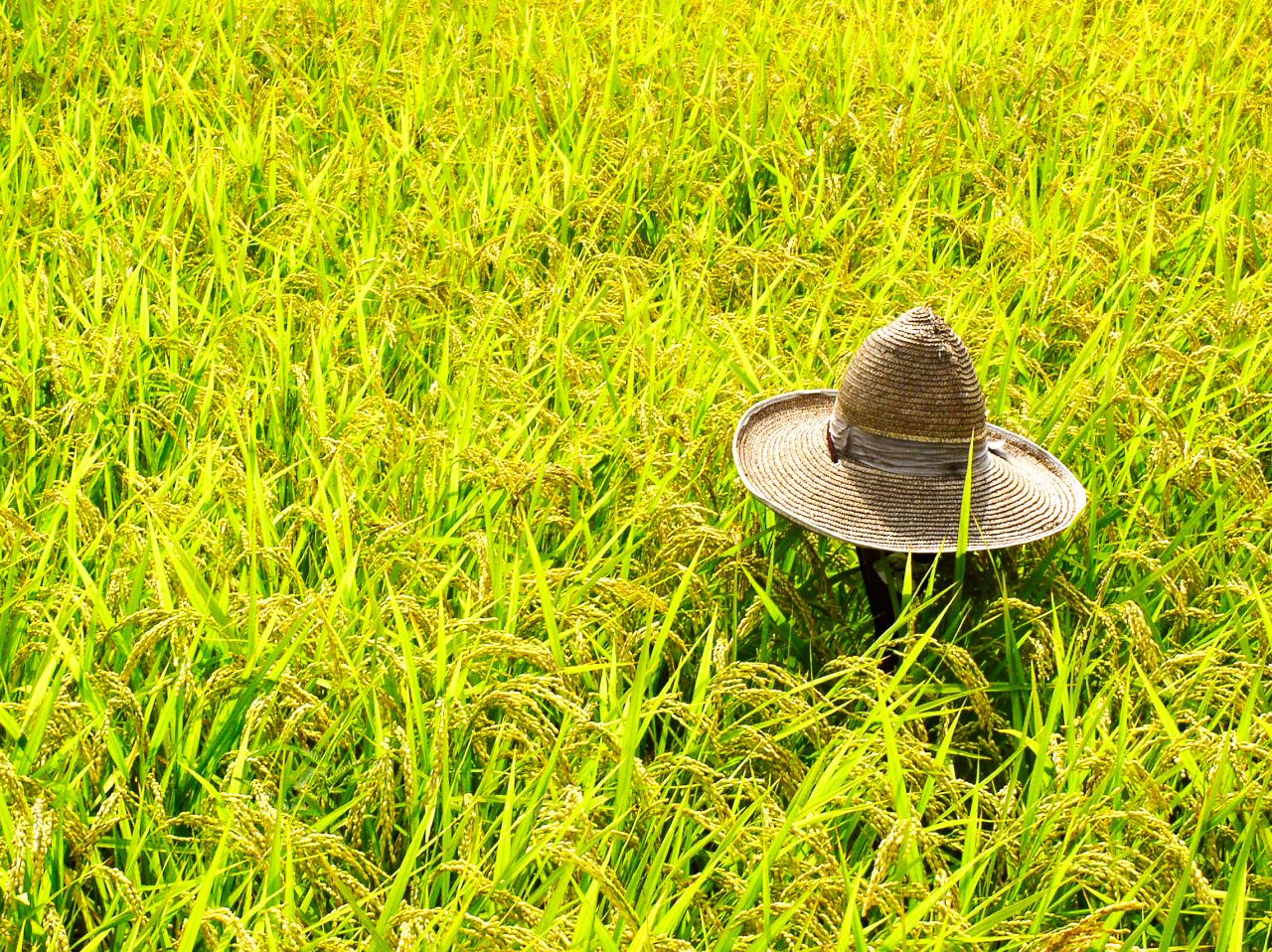 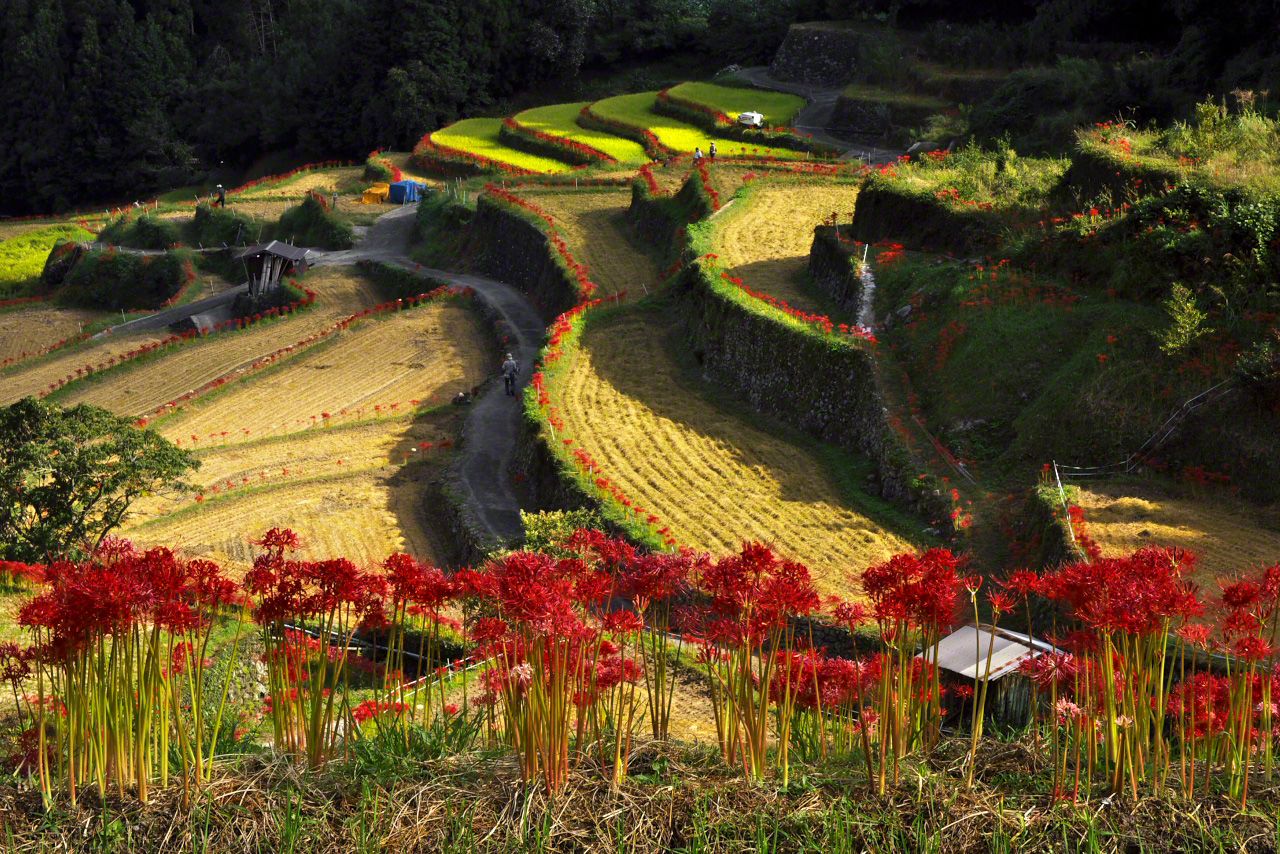 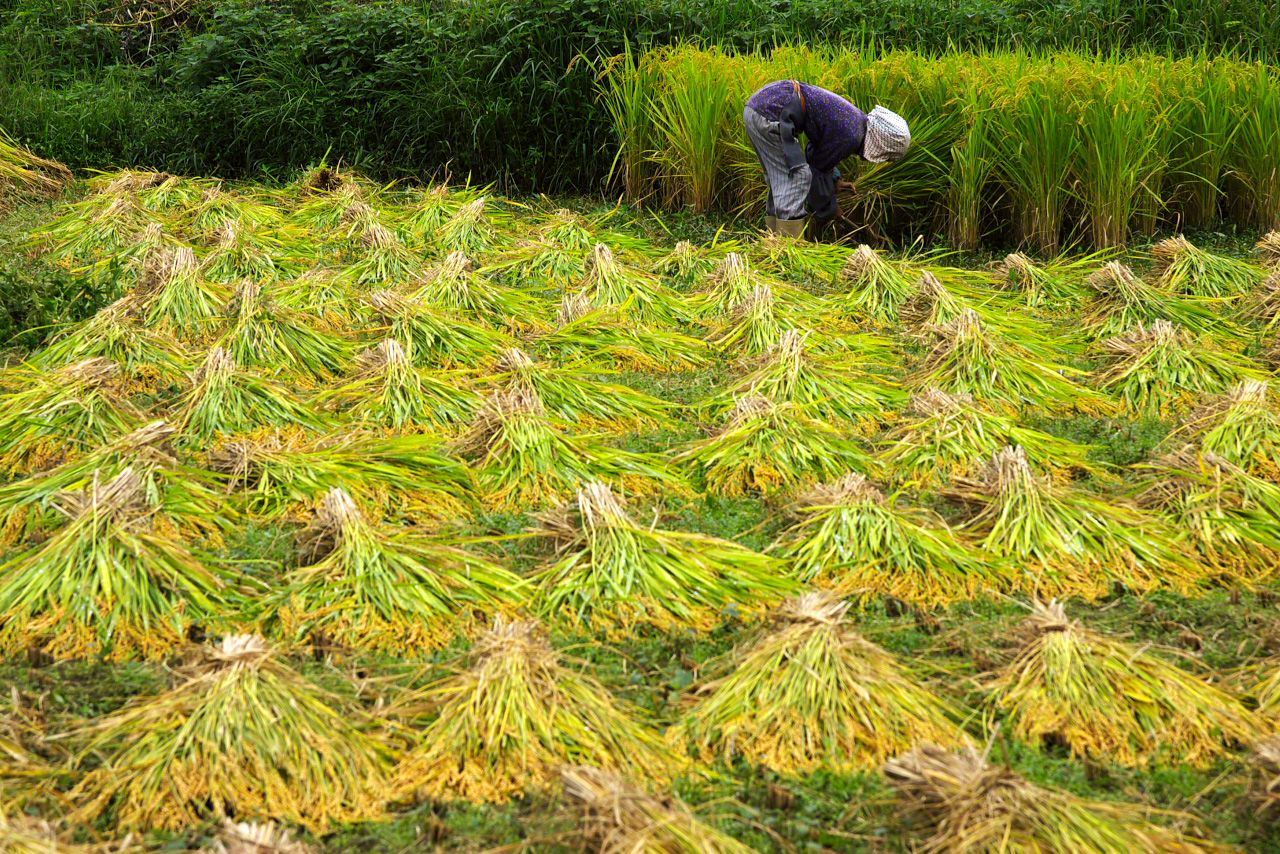 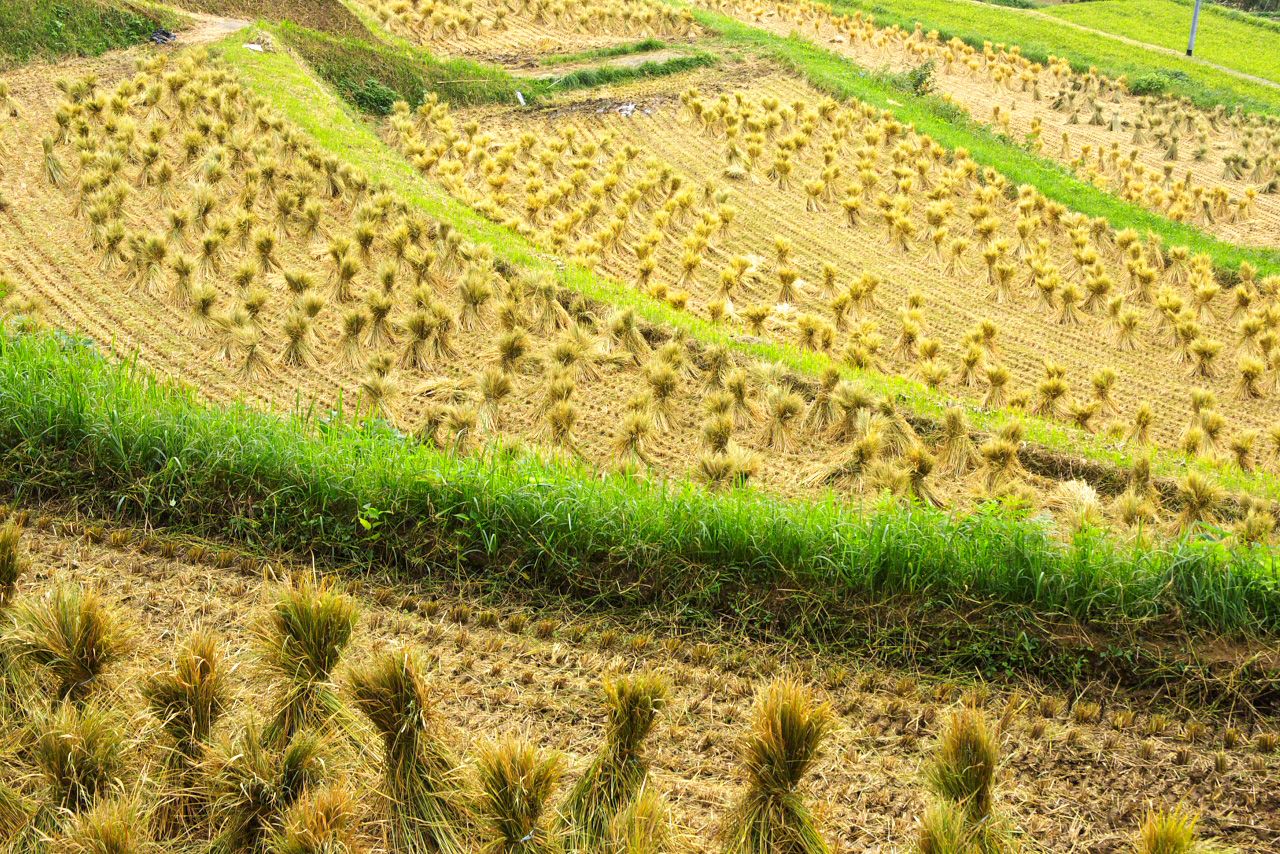 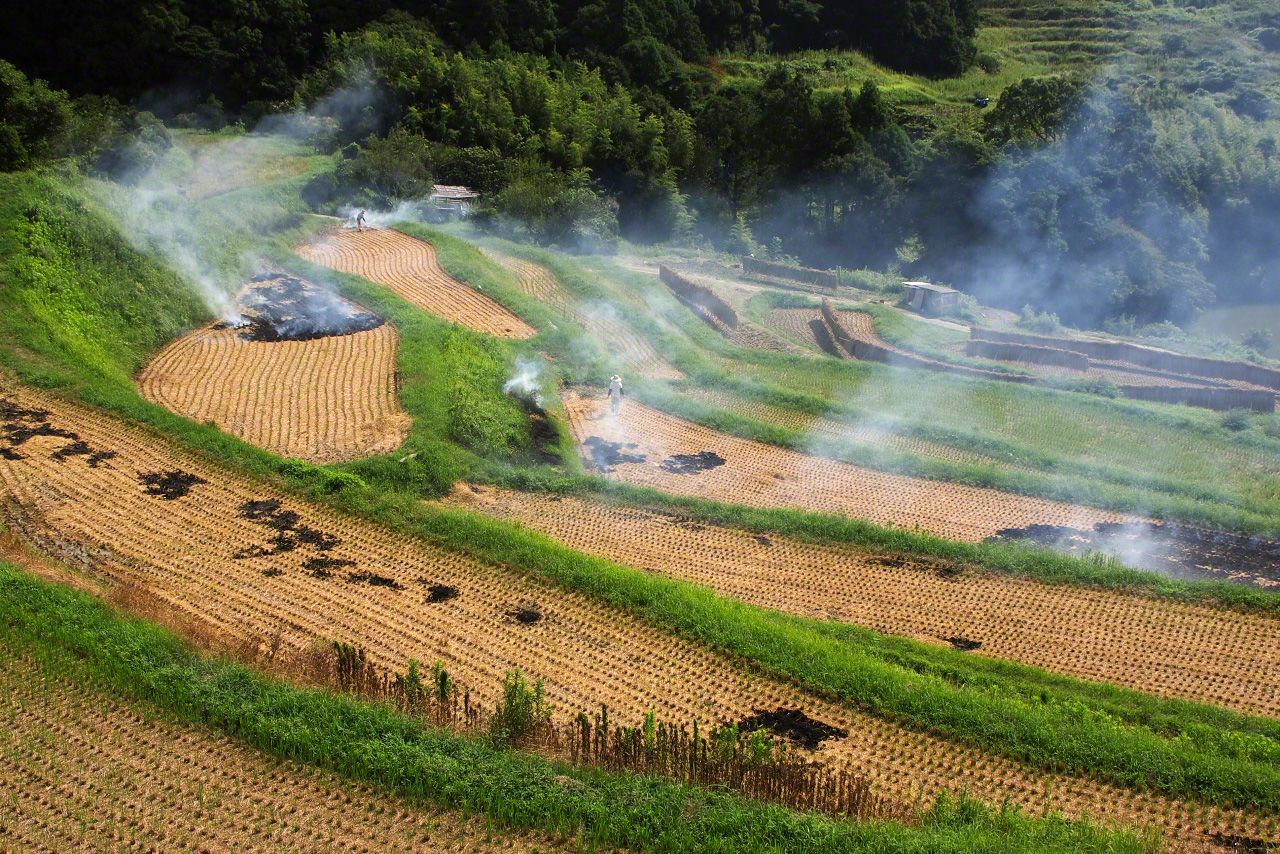 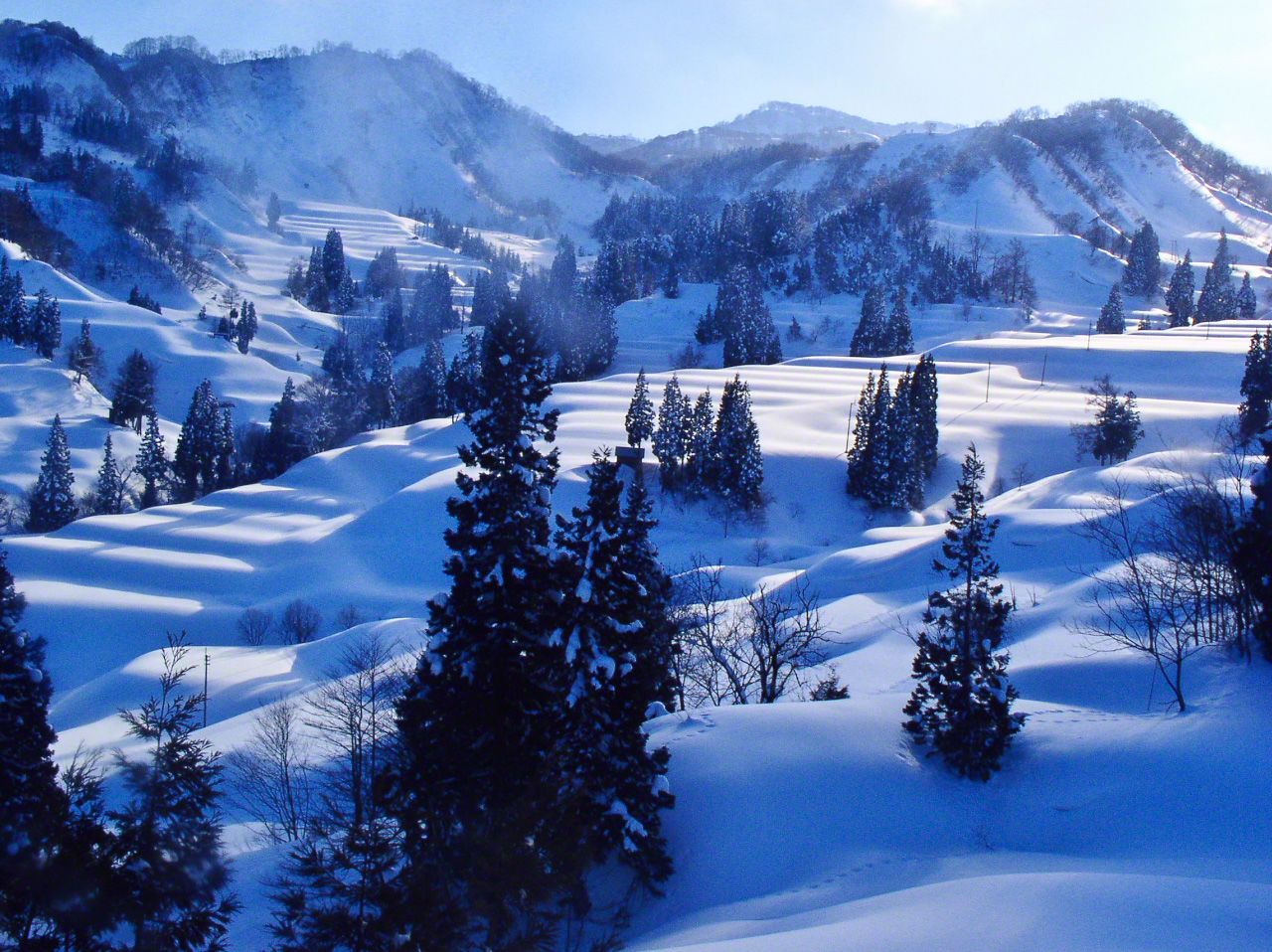