Dainichidō Bugaku: Ritual Dances in the Chill of Winter (Photos)

Culture Jan 14, 2017
Amid deep snow, on the second day of the year, people from four northern Japanese villages gather to perform ritual dances known as Dainichidō Bugaku. These photos convey the atmosphere surrounding a tradition that dates back 1,300 years.

High-spirited, young voices echo through a mountain village buried deep in snow. Temperatures can fall to 20 below in the city of Kazuno in Akita Prefecture, northern Japan, nestled close to the borders of Iwate and Aomori Prefectures. On January 2 each year, people from four local communities gather at the Dainichidō hall of Ōhirumemuchi Shrine to perform nine sacred dances. These are known collectively as Dainichidō Bugaku.

A Touch of Kyoto in Northern Japan

A troupe from the ancient capital of Kyoto is said to have brought the bugaku dances of the imperial palace to this remote area 1,300 years ago. The tradition has faced numerous crises over the centuries. The destruction of most historical records in repeated fires made it necessary to tap the memories of older residents to revive various aspects of the dances. Shintō rituals in the four communities were temporarily suspended, moreover, when gilded masks used in some of the dances were stolen.

The words chanted on stage were passed down orally through the generations, but the sudden death of the chanter meant that they were lost. Today's performers imitate the action of chanting.

Performers must undergo strict spiritual purification in preparation for the dance that may last up to 48 days. During this time, they must sleep alone, refrain from visiting the homes of the recently deceased, and abstain from eating meat. Childbirth may not take place in their homes in this period. The performers are normally engaged in a variety of professions, such as carpentry, farming, firefighting, hairdressing, or office work. For those in the prime of life, dietary restrictions can be especially tough.

In one of the communities, another required practice is to bathe in the icy waters of early morning. The freezing dip is intended to ritually cleanse the body and spirit of the performer. 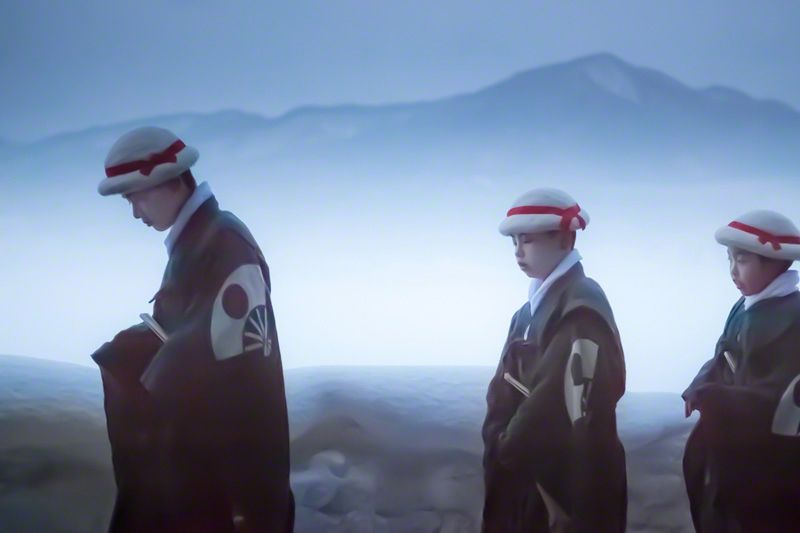 While performers generally pass on their craft to the next generation, it may be impossible to find someone to carry on the tradition. Due to the declining birthrate, it is a particular struggle to ensure there are three child dancers to perform the Torimai (bird dance).

The people of the area have overcome immeasurable difficulties to preserve this wonderful tradition. As an expression of love for the local community, I find it a continuing source of hope and inspiration.

(Originally published in Japanese on December 22, 2016. Photographs and text by Chikura Yukari. Banner photo: Children perform the Torimai in the snow.) 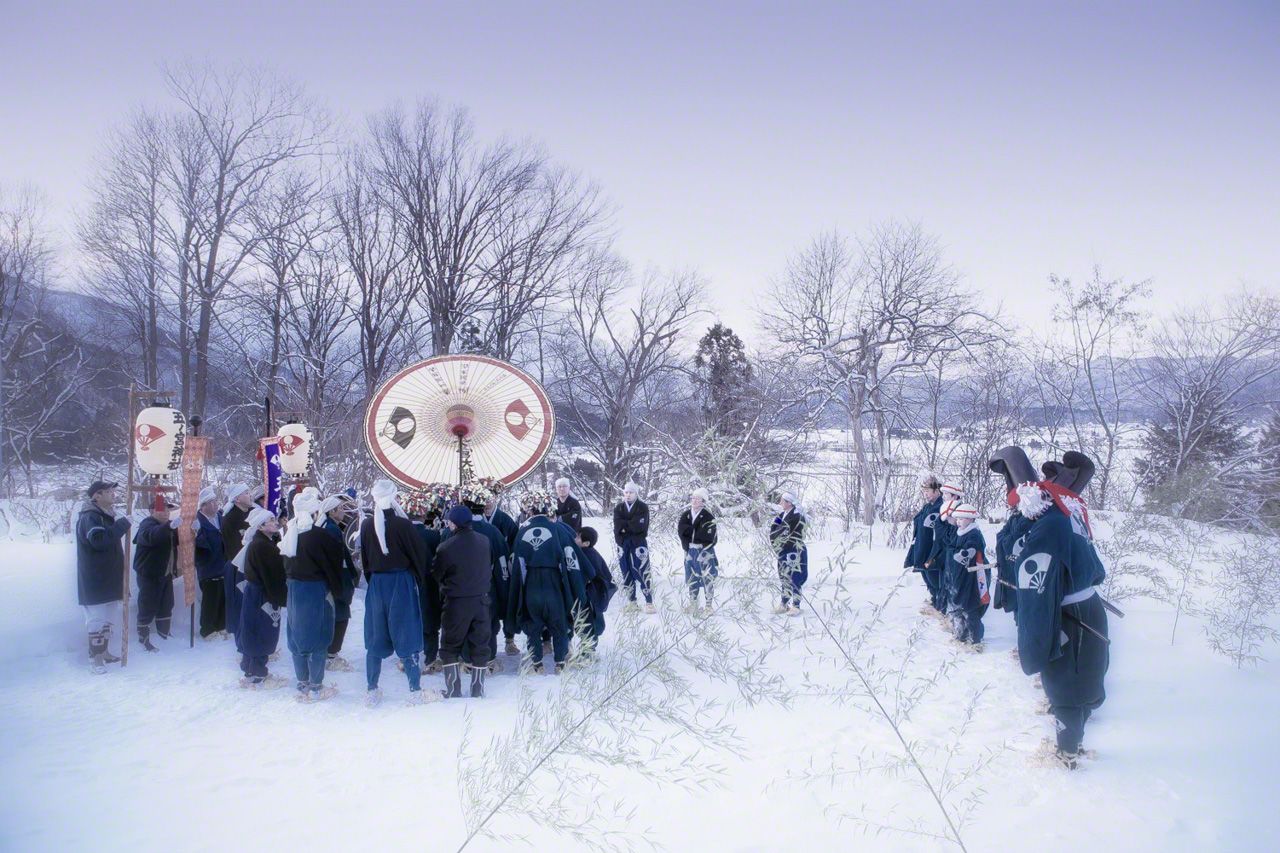 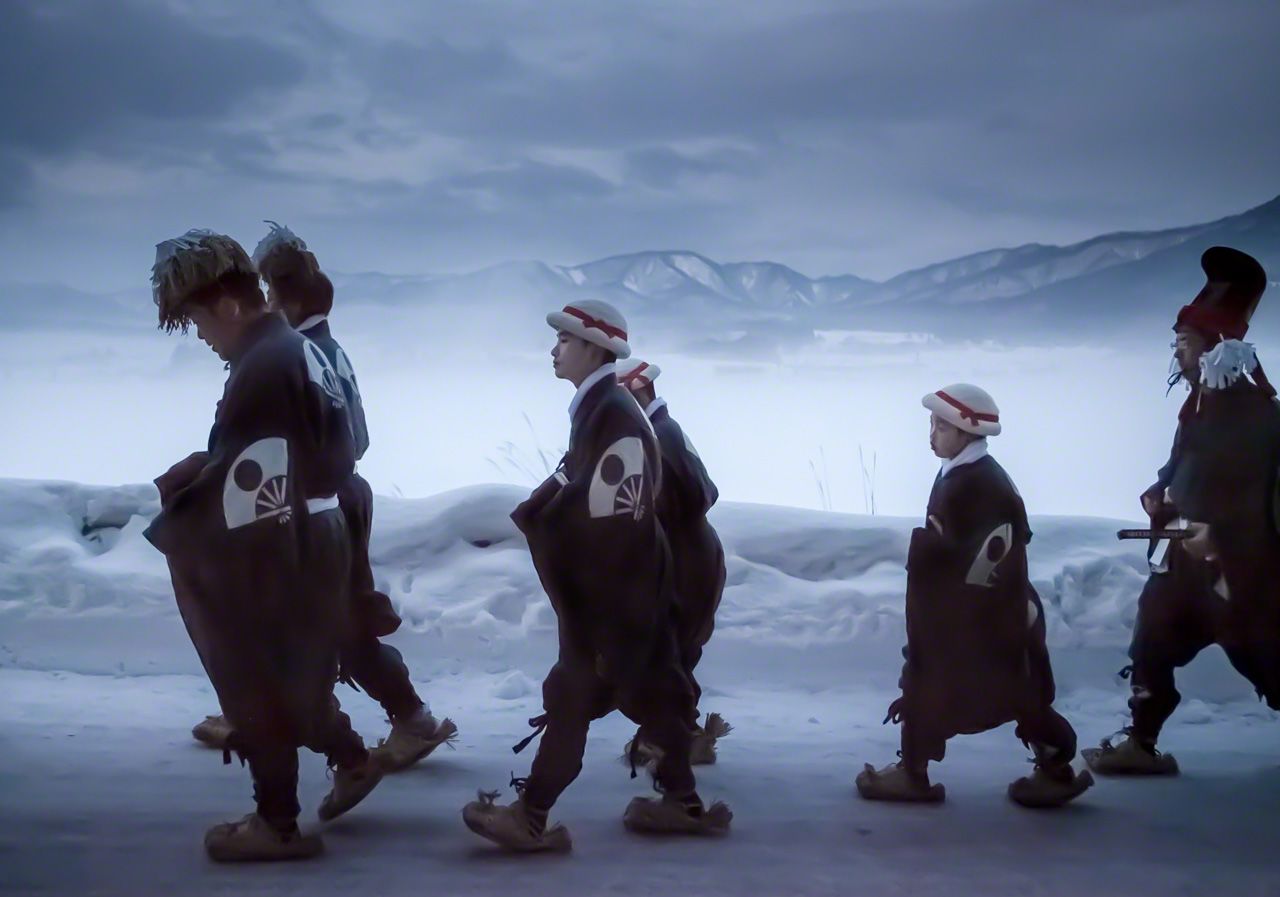 Performers walk along a snowy road to the shrine. 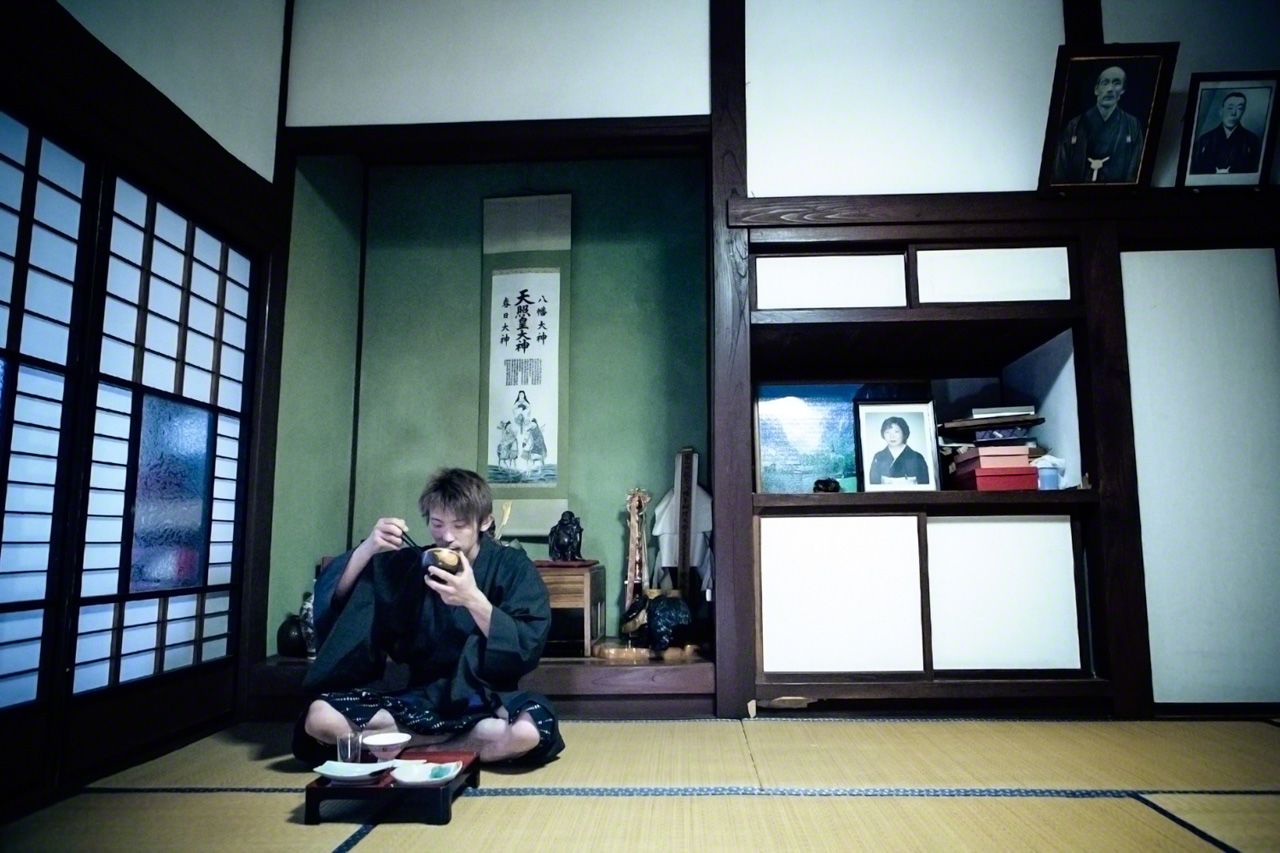 Performers must undergo spiritual purification that may last up to 48 days. 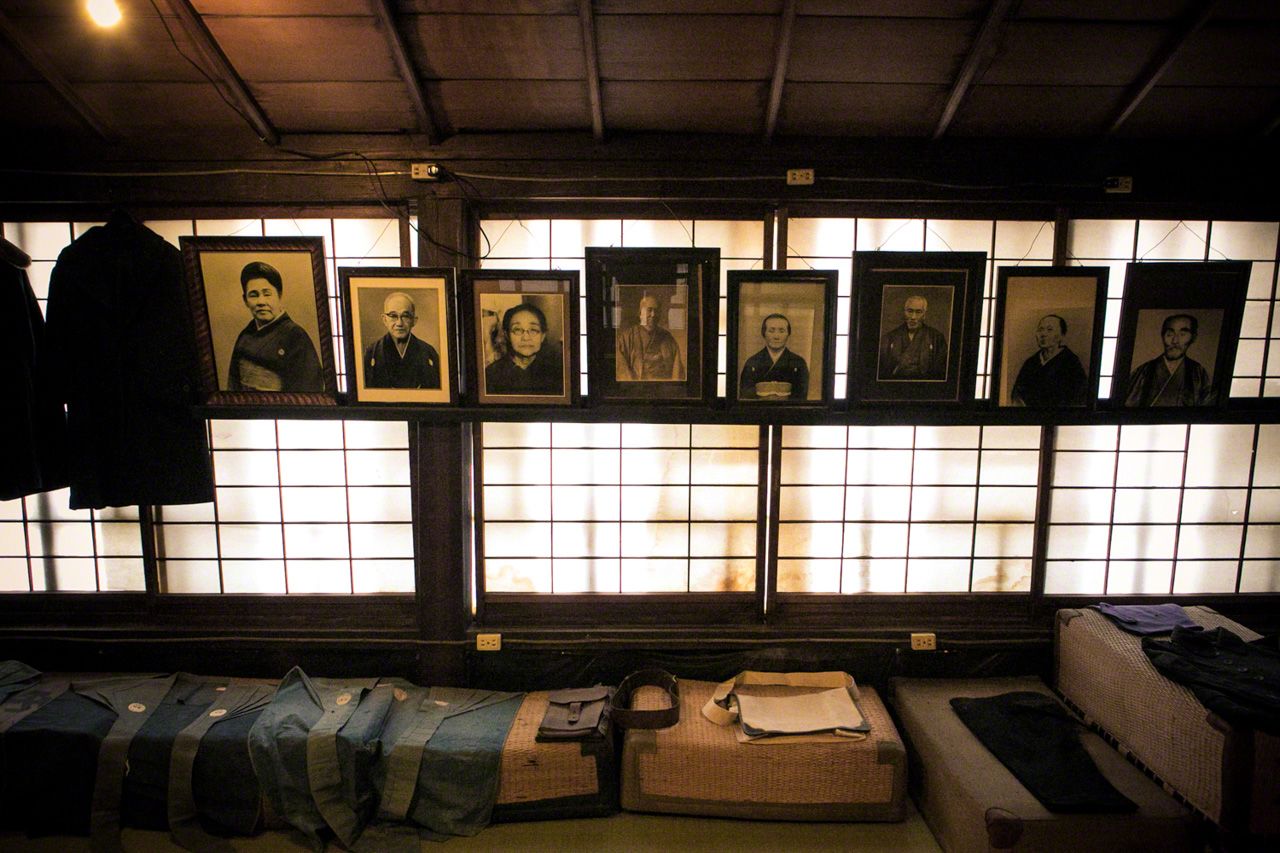 Photographs of ancestors displayed at a sake brewery established in 1856. 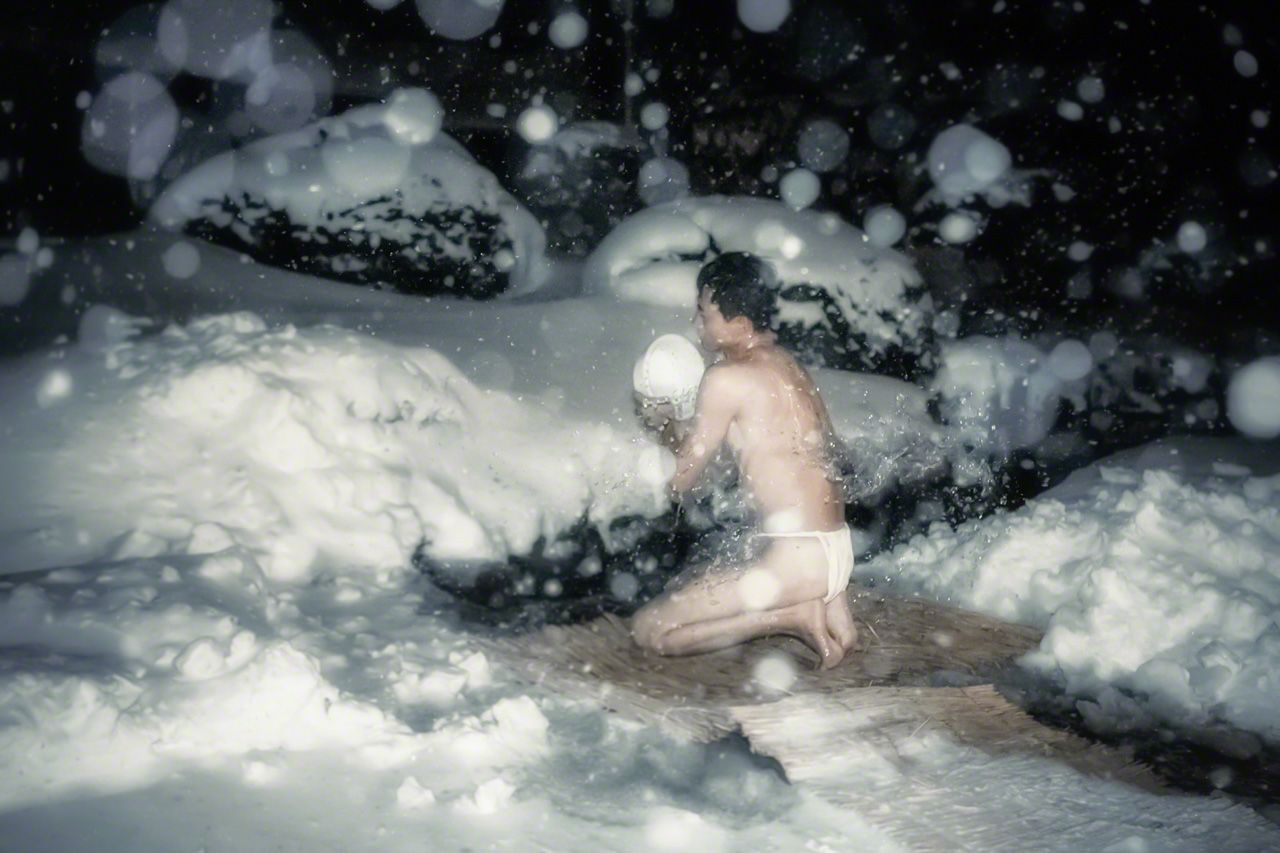 Bathing in icy waters as part of ritual purification. 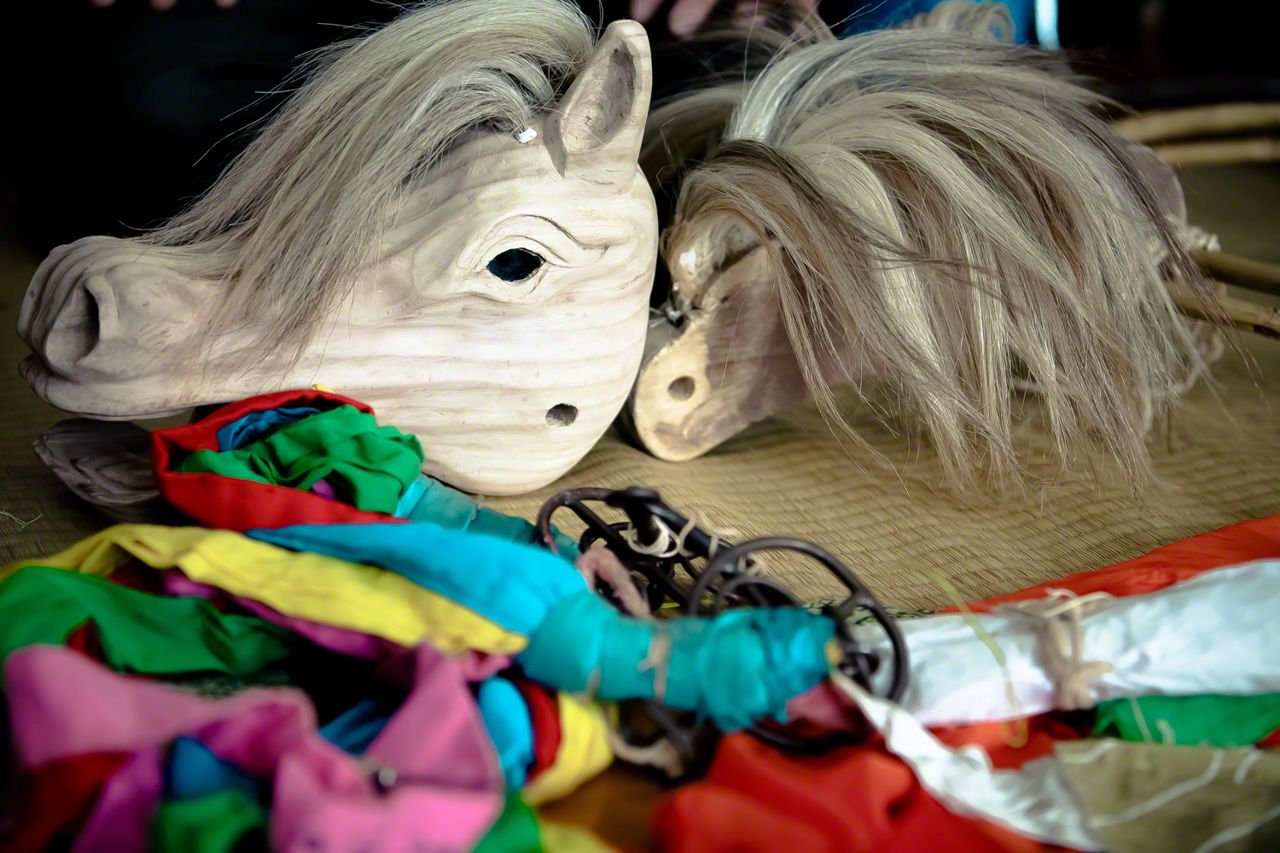 A horse head used in the Komamai (horse dance) at Ōsato, which is said to have been the original for other horse dances around Japan. 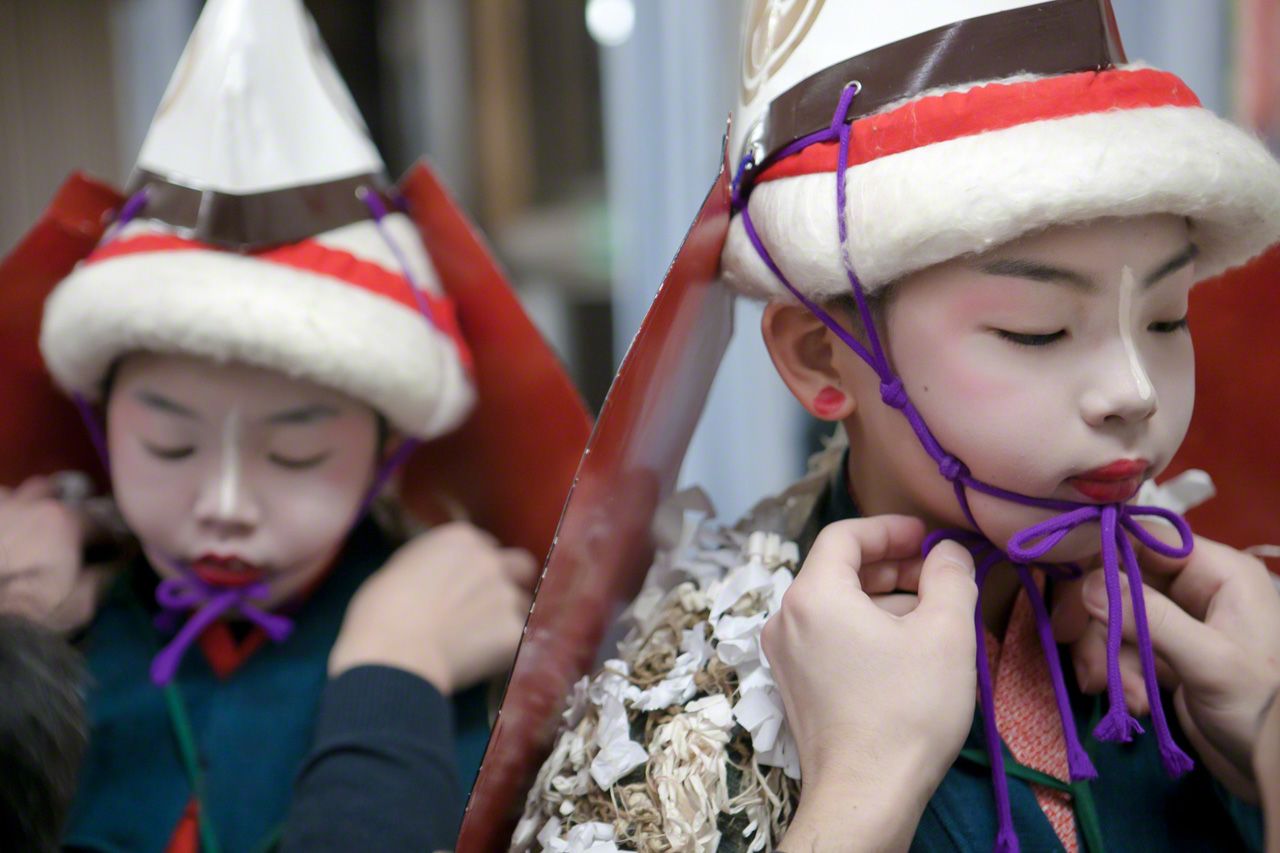 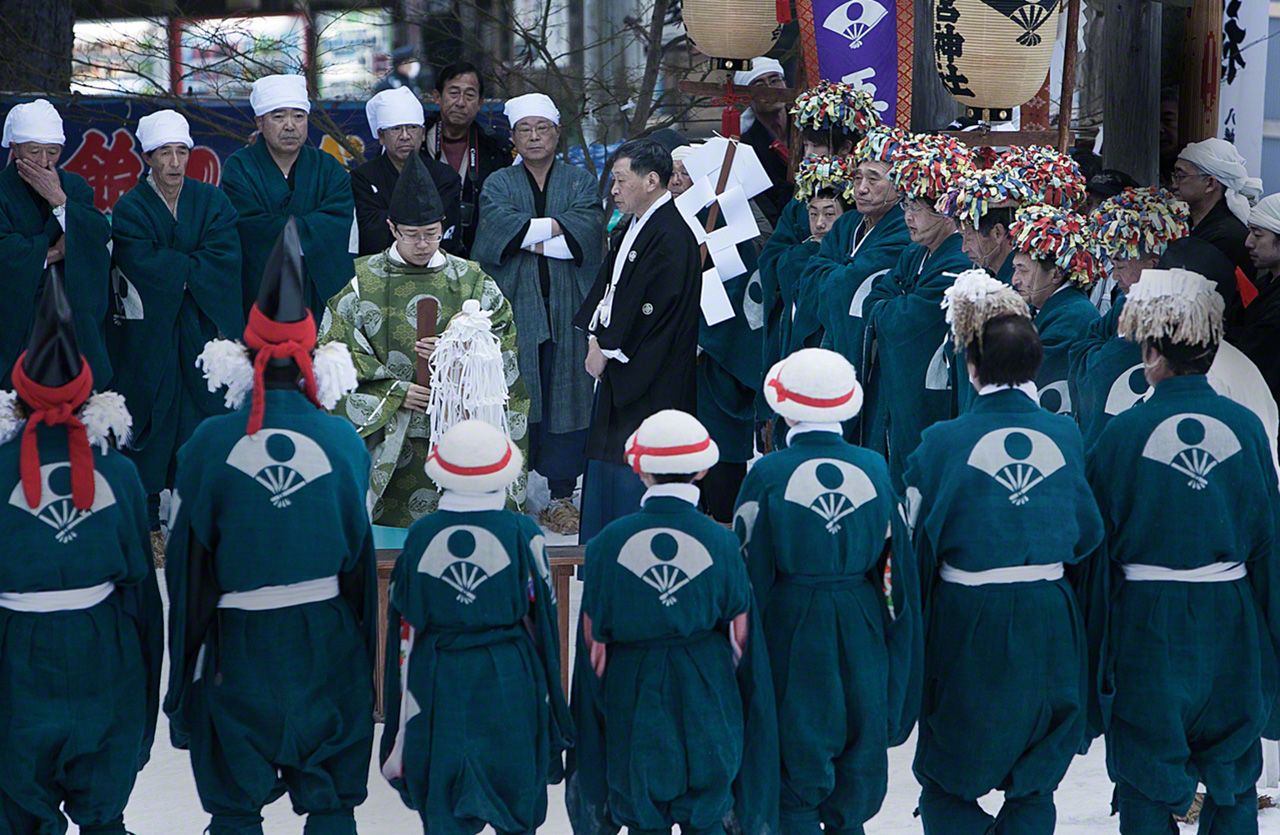 Performers from all four villages assemble within the shrine for a purification ritual. 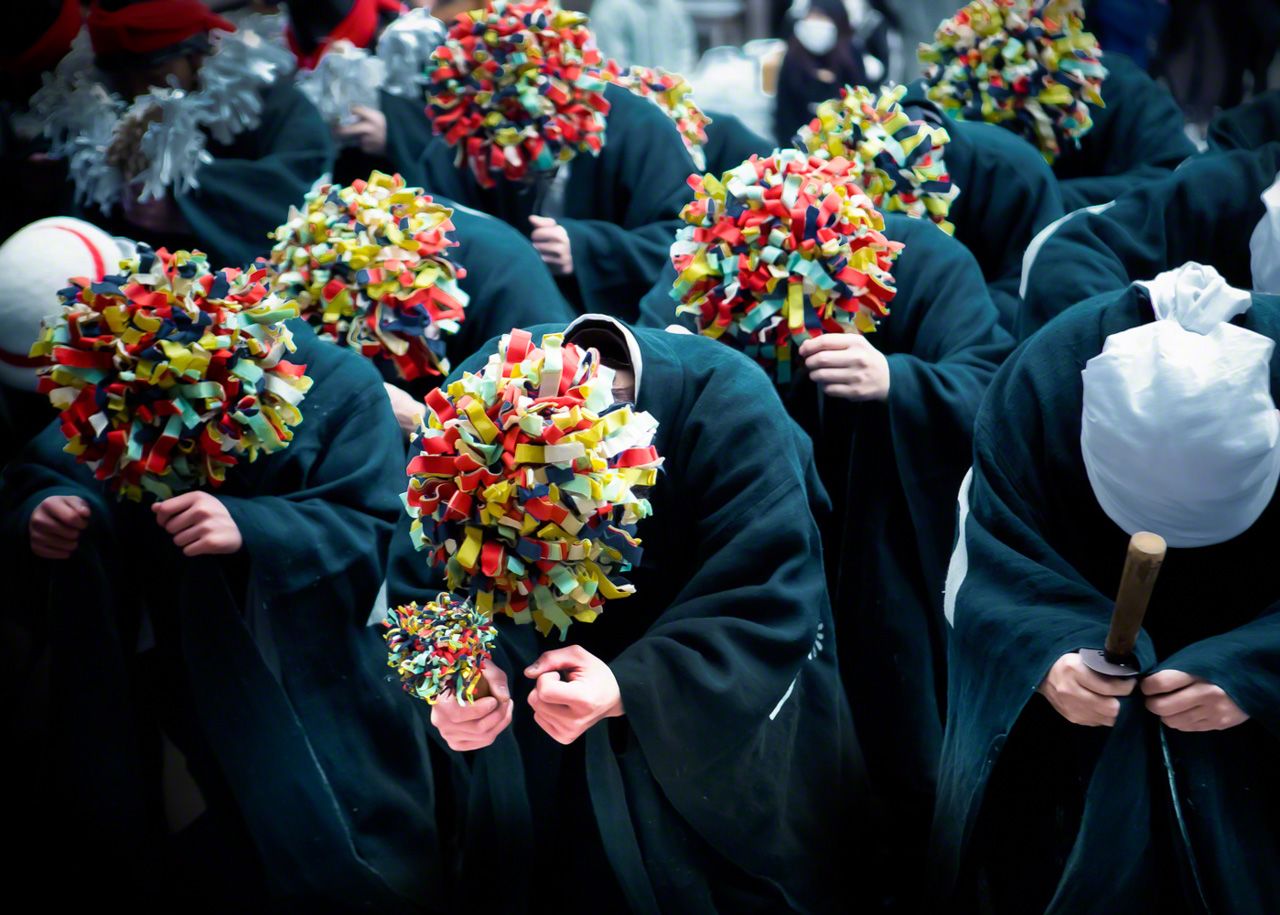 Bowing deeply in time with flute music before the Kanatemai dance. 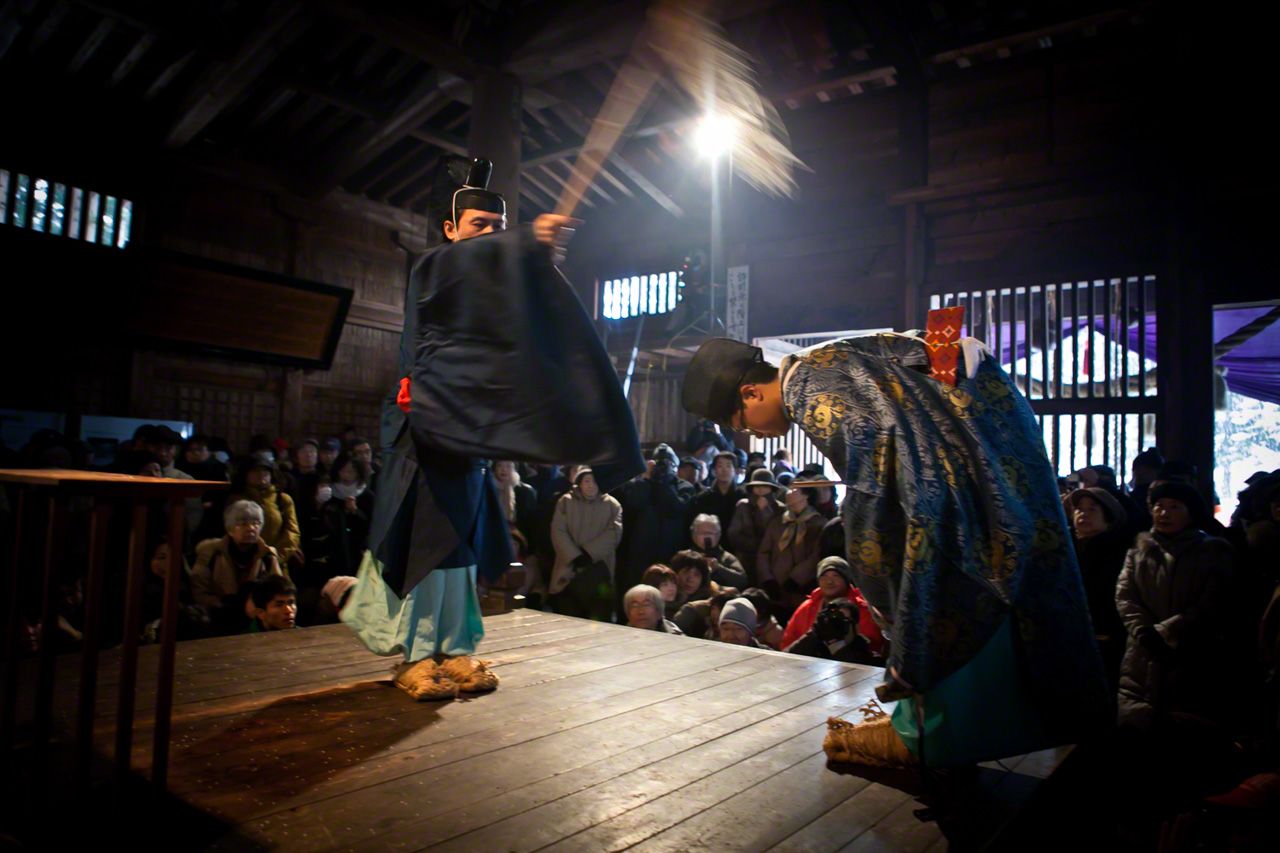 A ritual introduced in recent years. 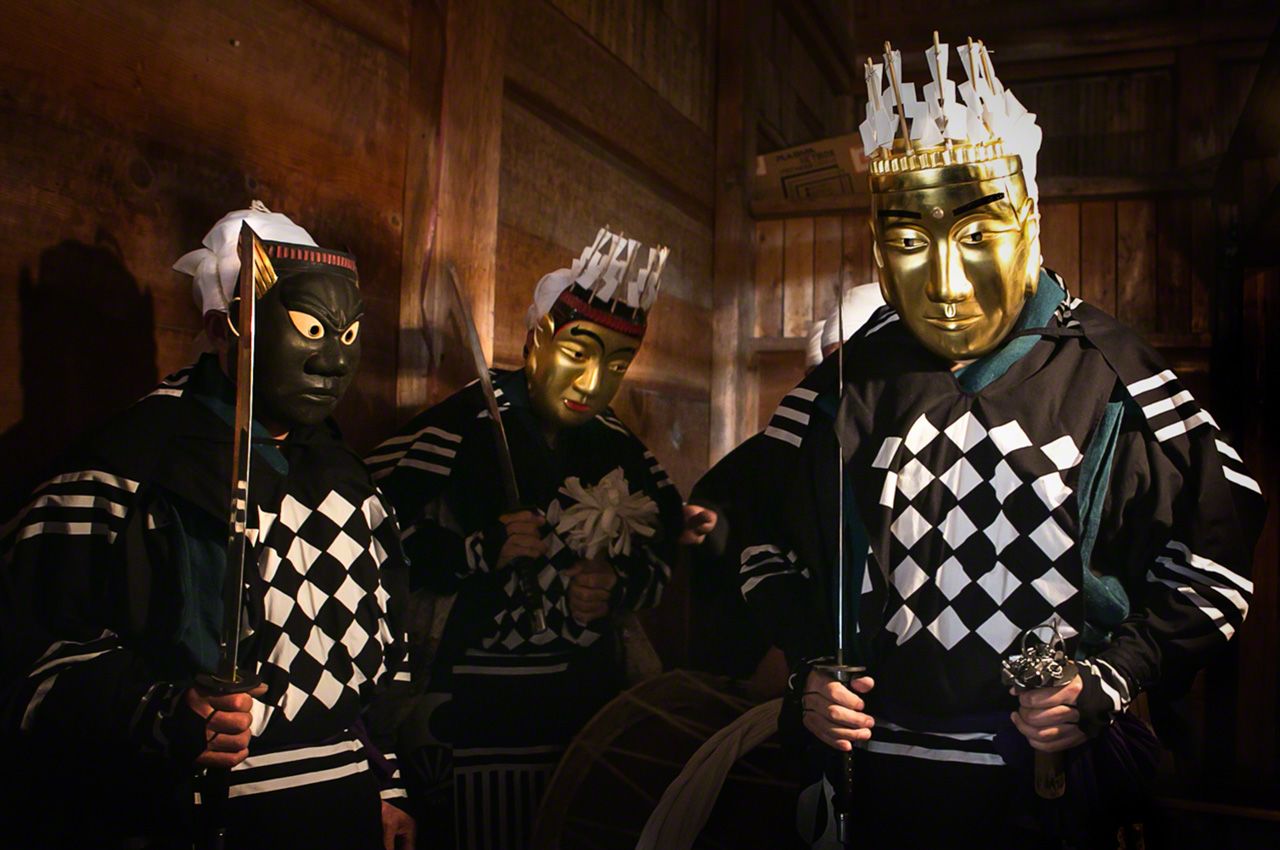 Sacred masks used in the Godaisonmai dance performed by residents of Taninai village may not be touched with bare hands. 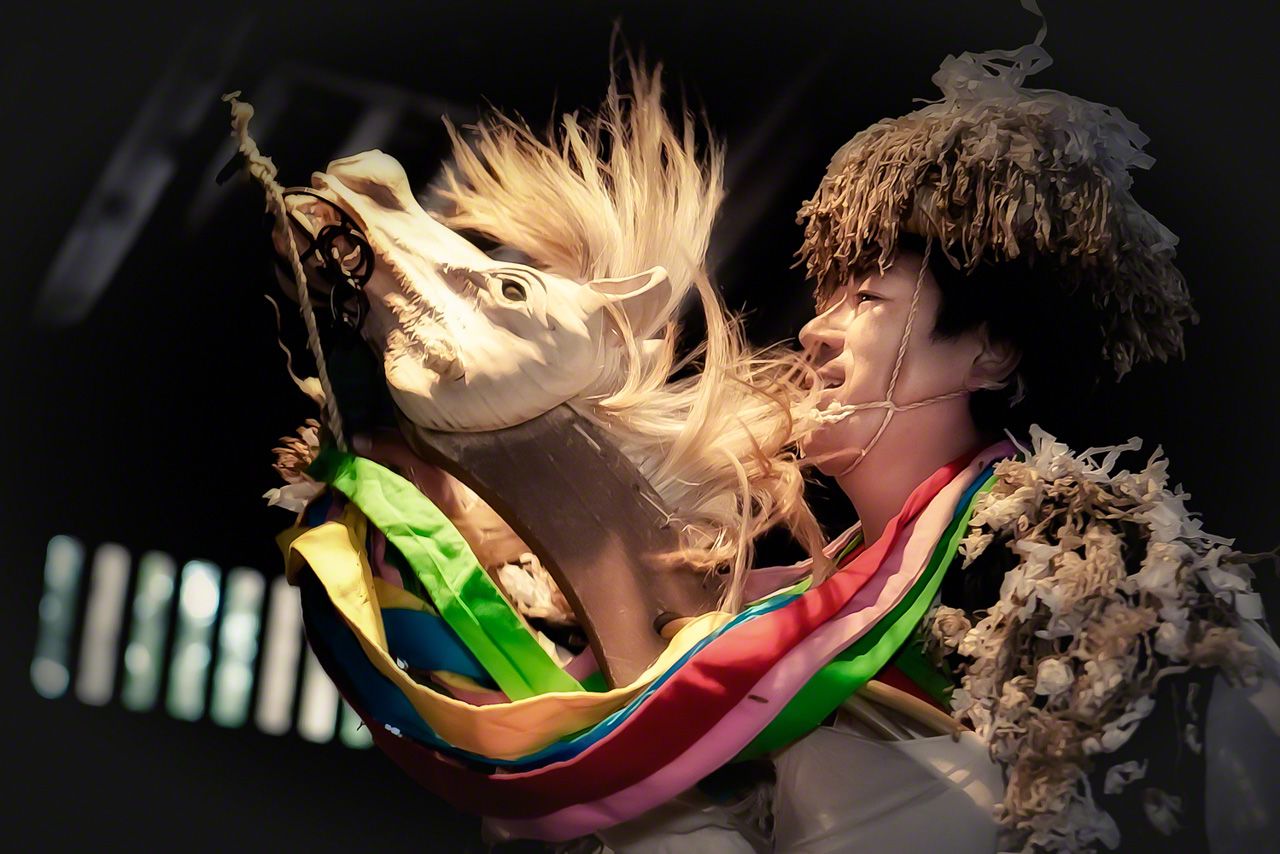 In the Komamai, two performers represent horses, beating time with their feet as they grip reins and move the animal’s heads. 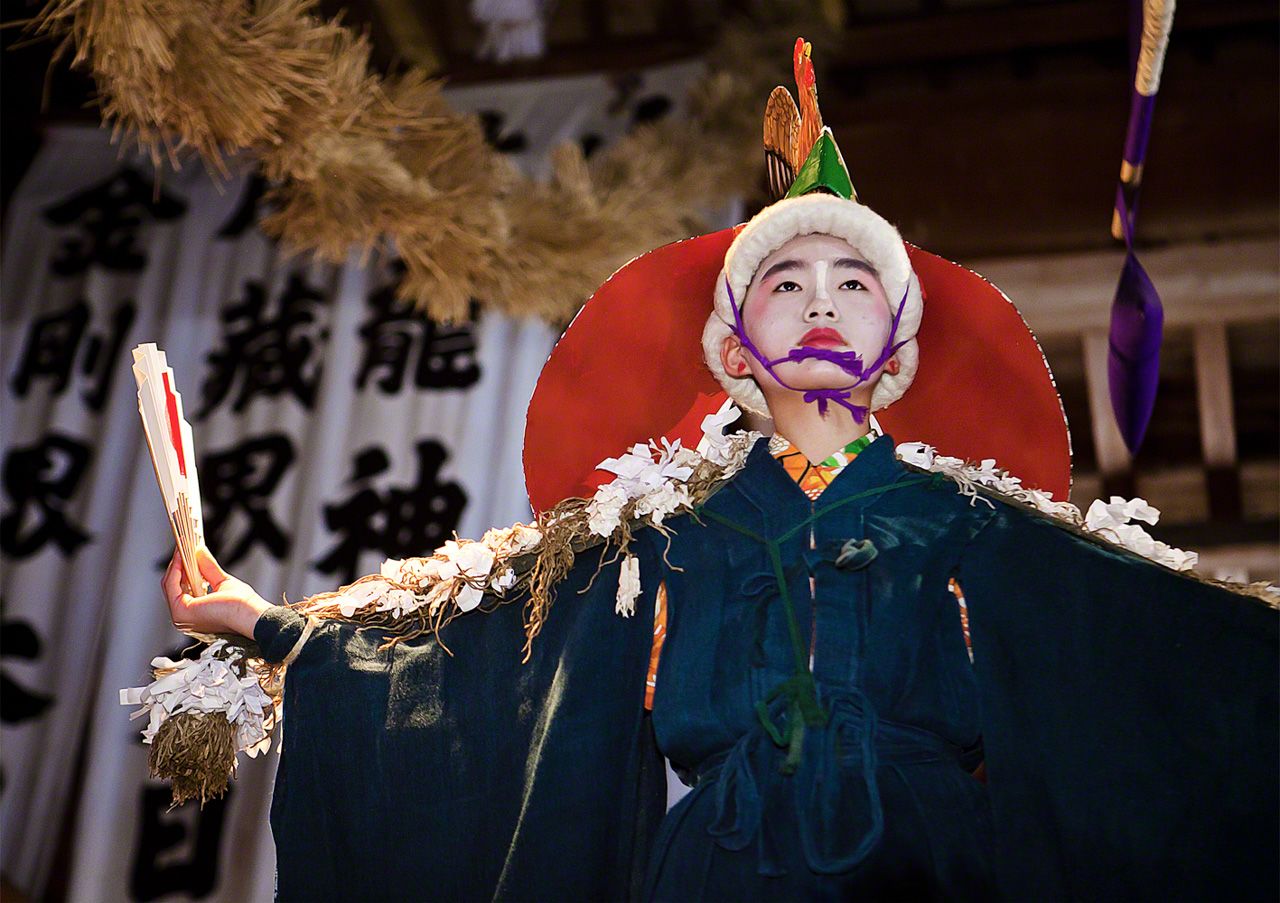 In the Torimai, three children from Ōsato wear “bird helmets” for a mother, father, and chick. The dancer representing the father bird holds a bell in his right hand, and all performers carry fans with a red sun design. 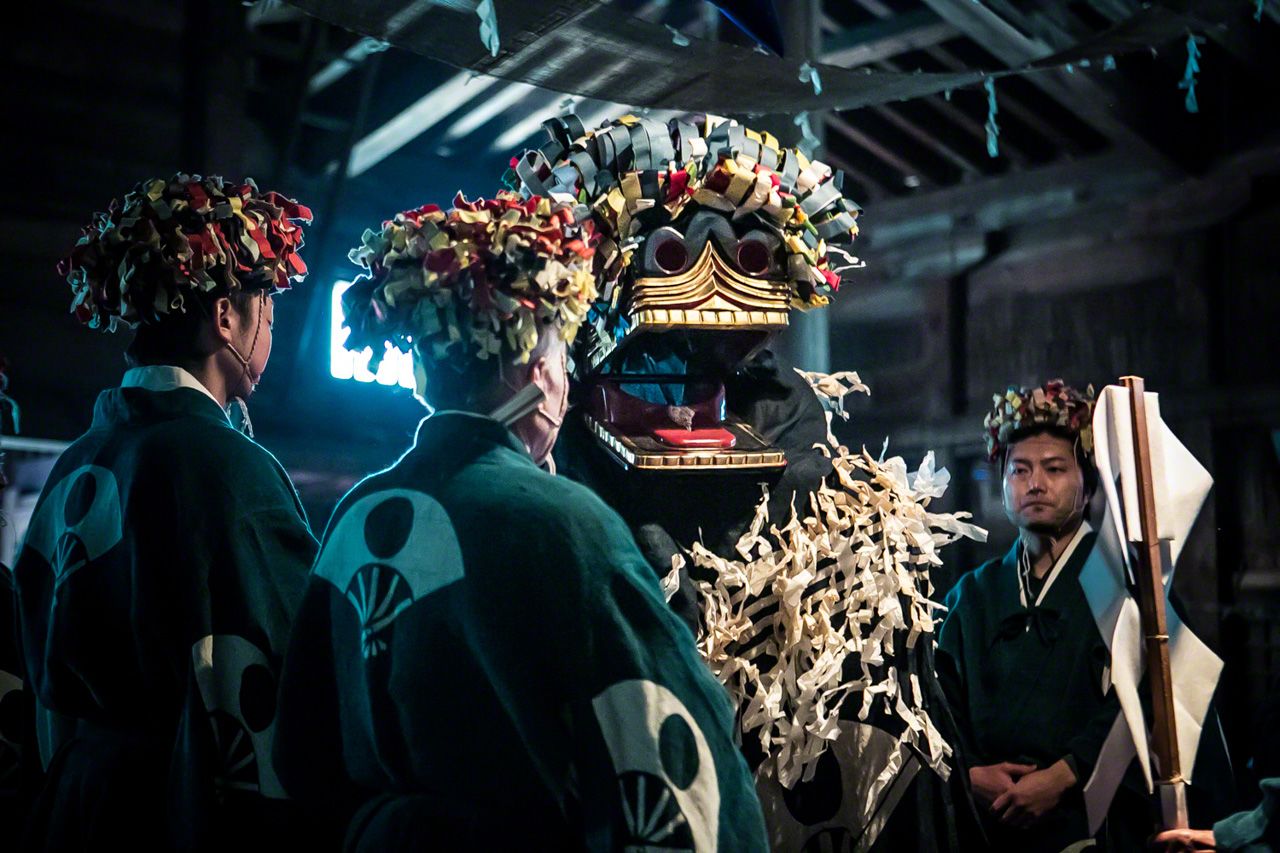 The Gongenmai dance offers solace to the spirit of a local prince. Dancers carry the lion head, with children waving its tail. 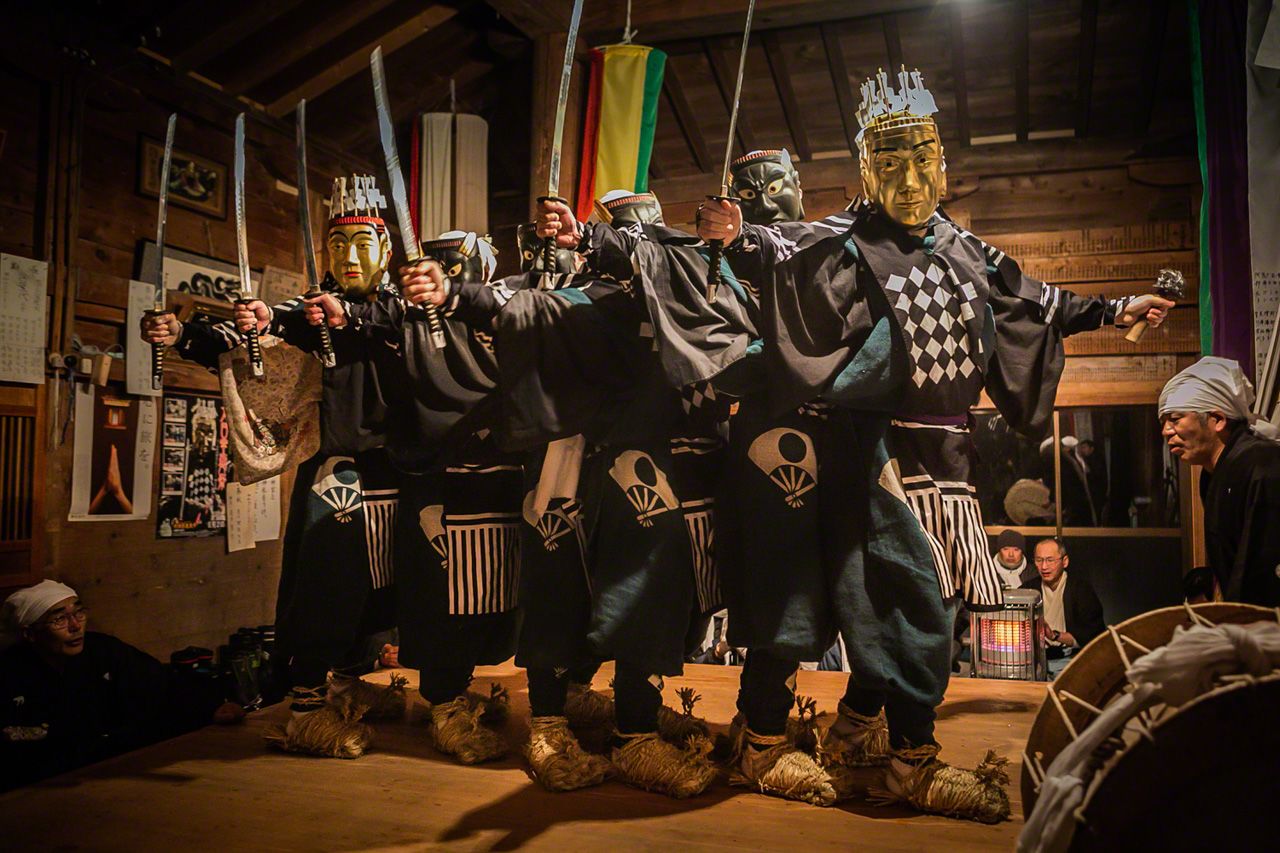 In the Godaisonmai dance, the two performers in golden masks represent the buddha Dainichi in the Diamond Realm and the Womb Realm. 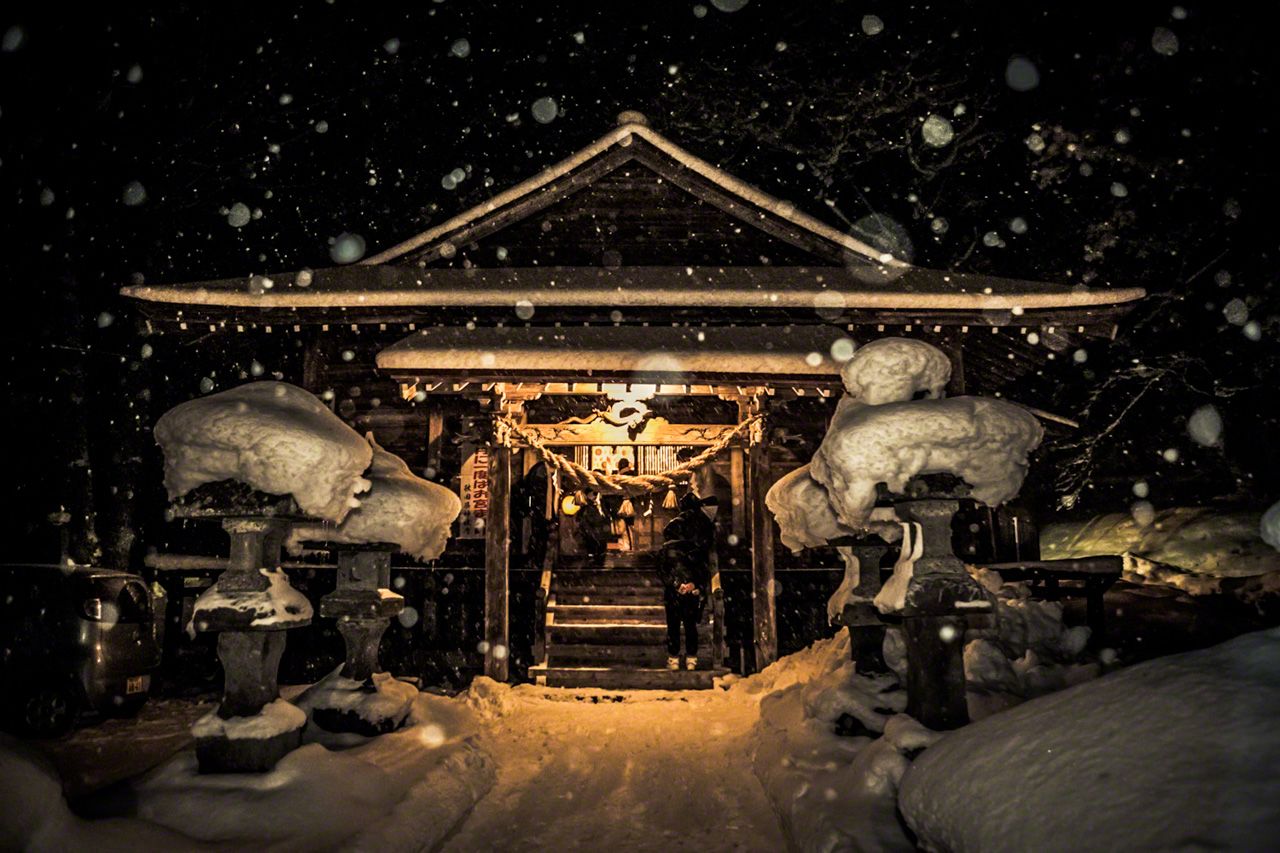 The Dainichidō hall amid falling snow. 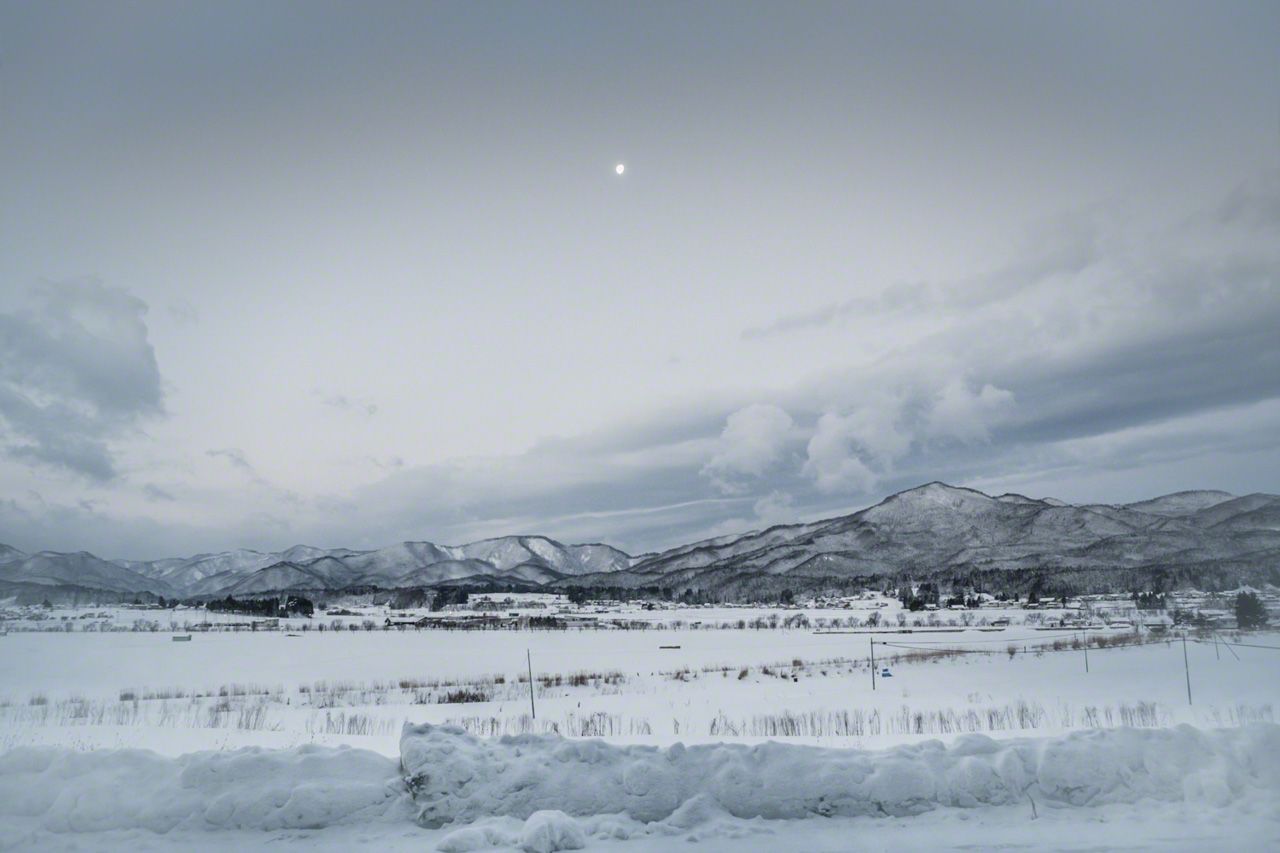 A new morning begins after the festival is over. In summer, this becomes a landscape of green fields.