Culture Jul 7, 2017
Japanese blacksmiths preserve a once vital traditional art. These photographs offer a window into their workshops as they display their artisanship.

Blacksmiths are artisans, forging red-hot iron into blades with expert hammer strokes. Just as we could not feed ourselves in a world without farmers, our lives would be very different today without this key profession. Civilization itself would have come to a halt in the Stone Age. 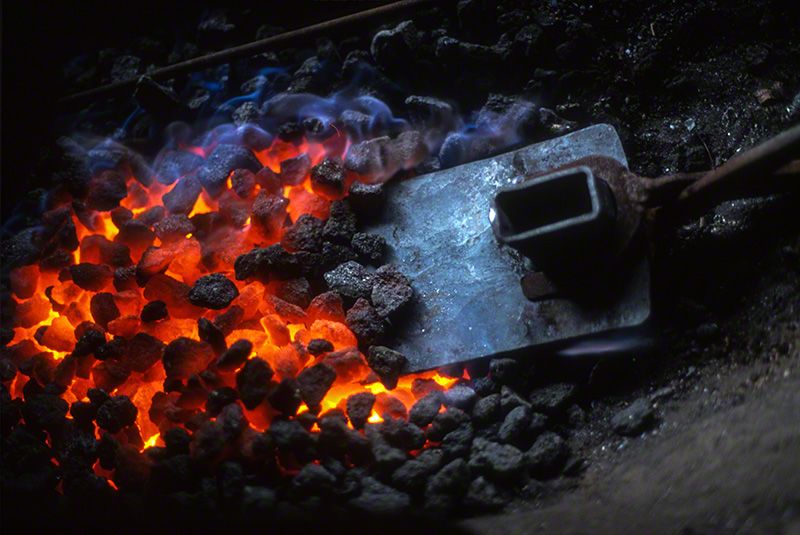 A hoe blade amid red, glowing coke. Photograph taken at the workplace of Hosaka Heizō in Odawara, Kanagawa Prefecture.

Vital Members of the Community

There are many kinds of blacksmiths. Some create swords that are works of art, and others forge knives for professional chefs. There are also smiths who specialize variously in scissors, carpenters’ tools like chisels and planes, and farming tools like spades and sickles.

Among these, the most common and closely linked to people’s everyday lives were nokaji, or “field smiths,” named so as they typically worked outdoors. Among the items they produced were agricultural implements, household knives, nata hatchets for woodcutters, and harpoons.

They were also accomplished at repairs like replacing worn-down hoe blades. Local communities relied heavily on their skills and sought their advice whenever they had problems with their tools.

Yet today the once vital nokaji have all but disappeared. Industrial transformation, a decline in the number of farmers and woodcutters, and the replacement of traditional hand tools by machines have stripped them of their former indispensability.

The Pleasure of Handmade Tools

In today’s society it is all too easy to buy whatever we need, a situation that threatens the blacksmith profession. For example, fishmongers, supermarkets, and department stores all sell fish that are pre-sliced. Even salads and fruit are increasingly sold ready to eat, removing the need to slice or peel foods.

A downside to this overreliance on the service industry, though, is that an increasing number of children are unable to use bladed tools properly. Japan built itself up as a technological superpower on the knowledge, techniques, and enterprise of its artisans, including blacksmiths. Yet, even the finest traditions cannot survive without support.

There is still time to preserve the special role of blacksmiths if people can rediscover the enjoyment of using handmade tools for such pastimes as cooking, gardening, pursuing a do-it-yourself hobby, or camping. Rather than buying everything ready-made, people should enrich their lives by taking the time to create one-of-a-kind experiences. 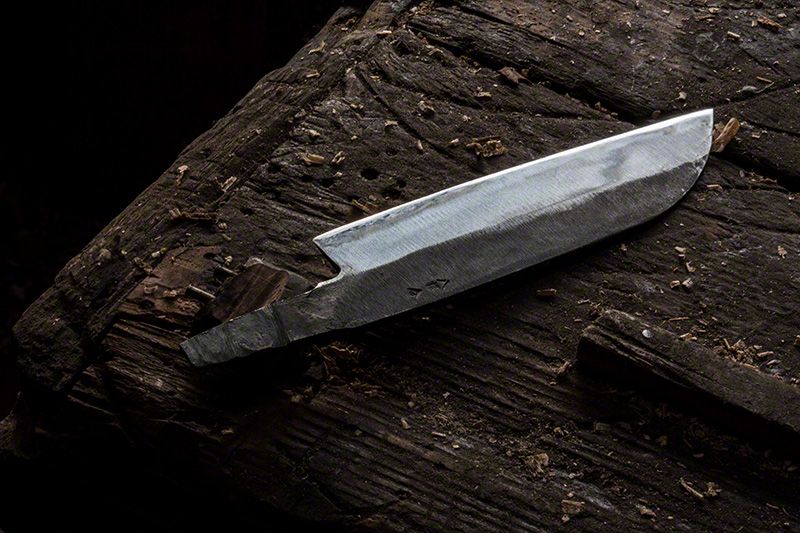 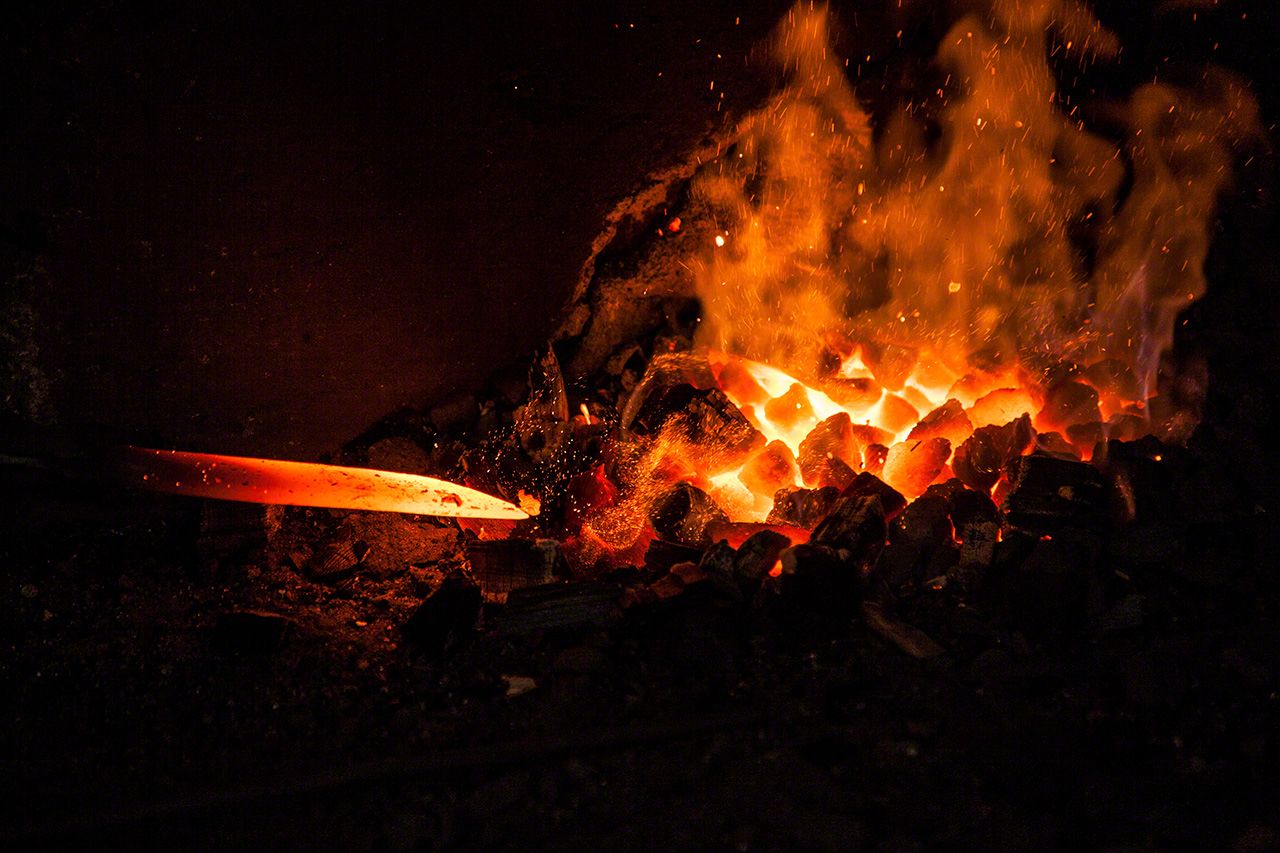 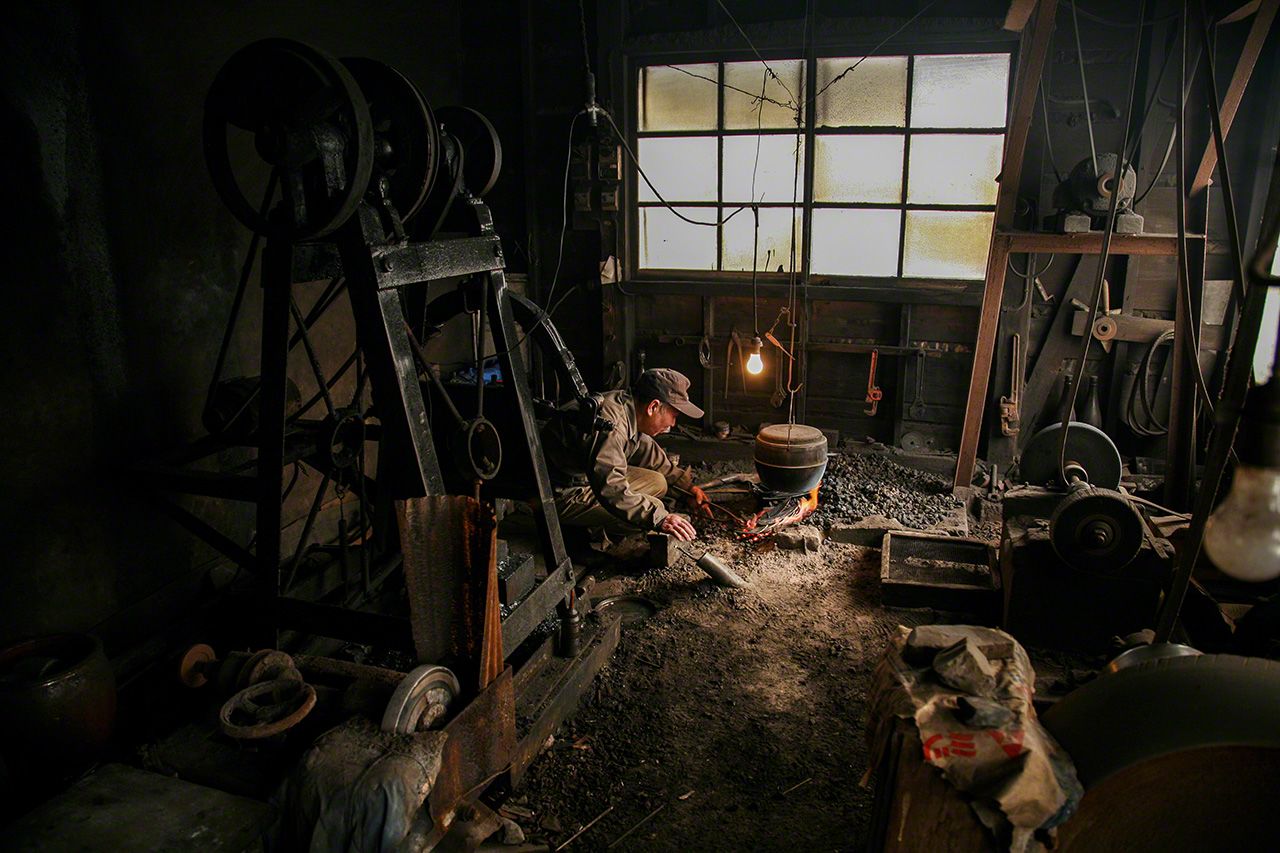 Blacksmith Kosaka Shigeo at work in Shinano, Nagano Prefecture. The area has long been known for producing hand-made sickles. 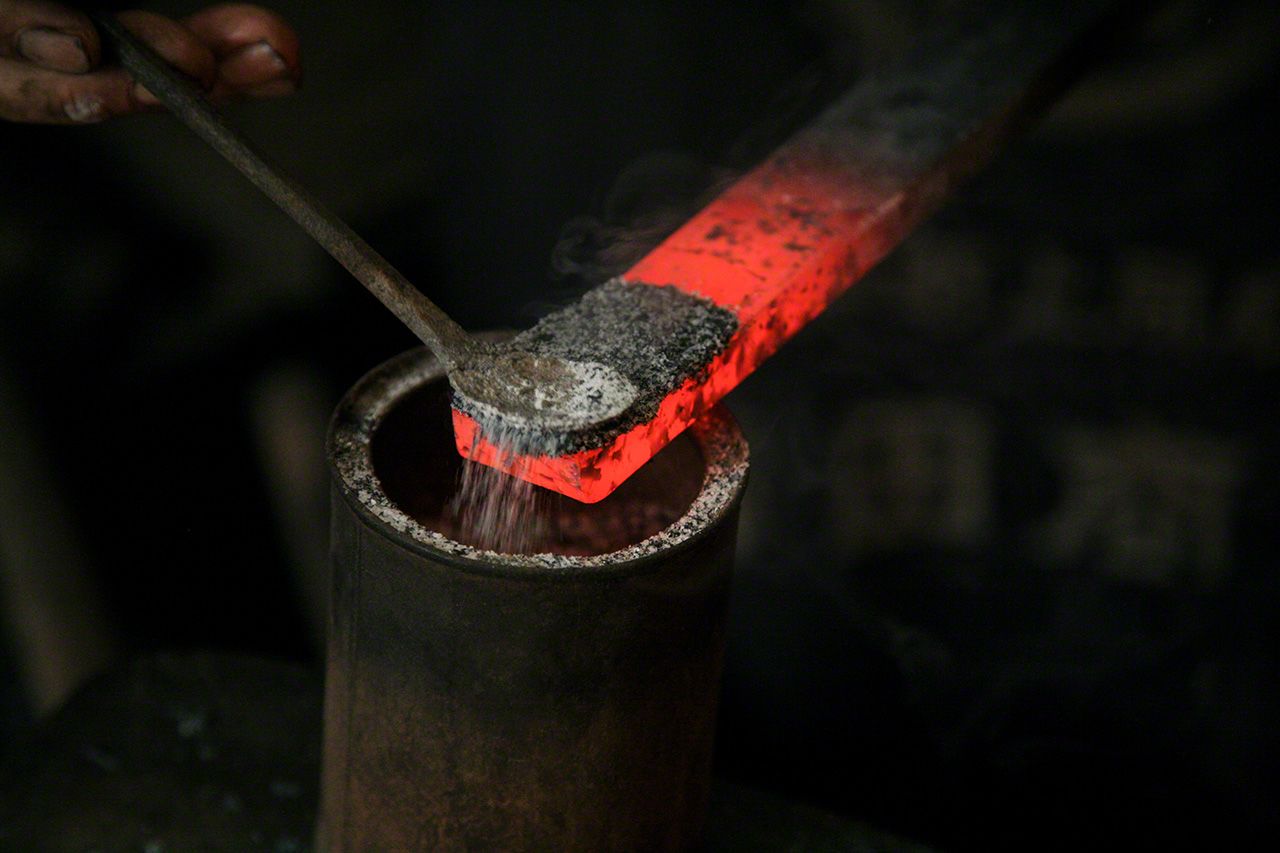 Creating a tapper for collecting lacquer from trees. At the workshop of Nakahata Fumitoshi in Takko, Aomori Prefecture. 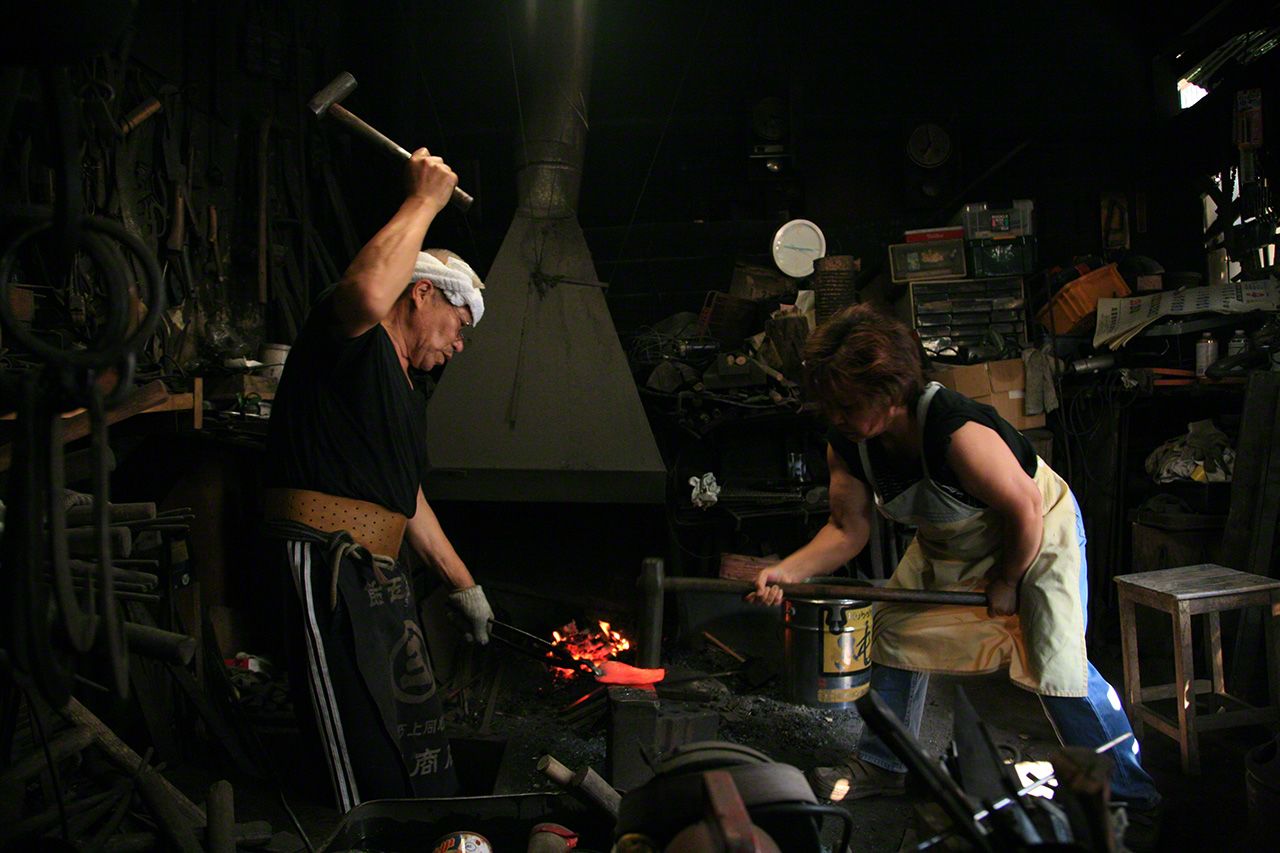 Nakahata’s wife weighs in with a heavy hammer. 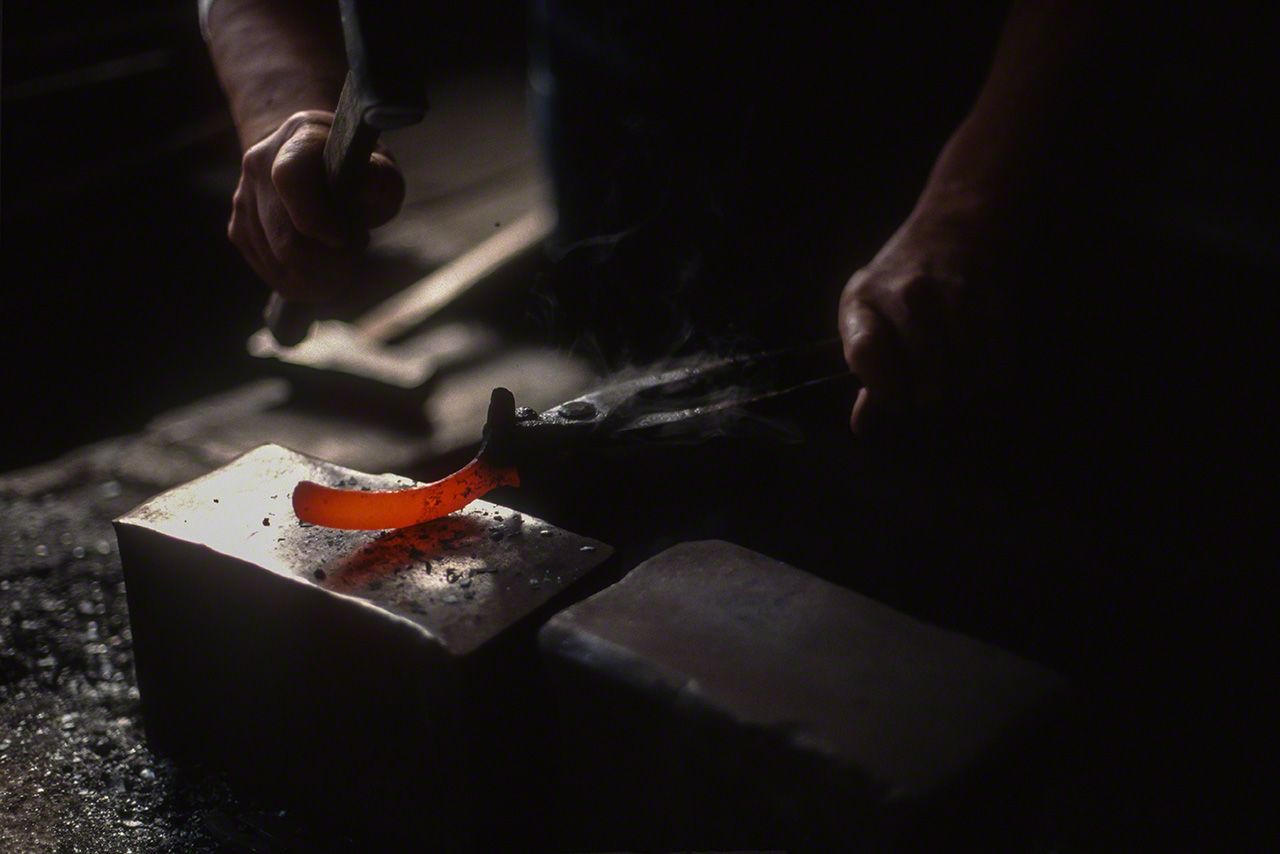 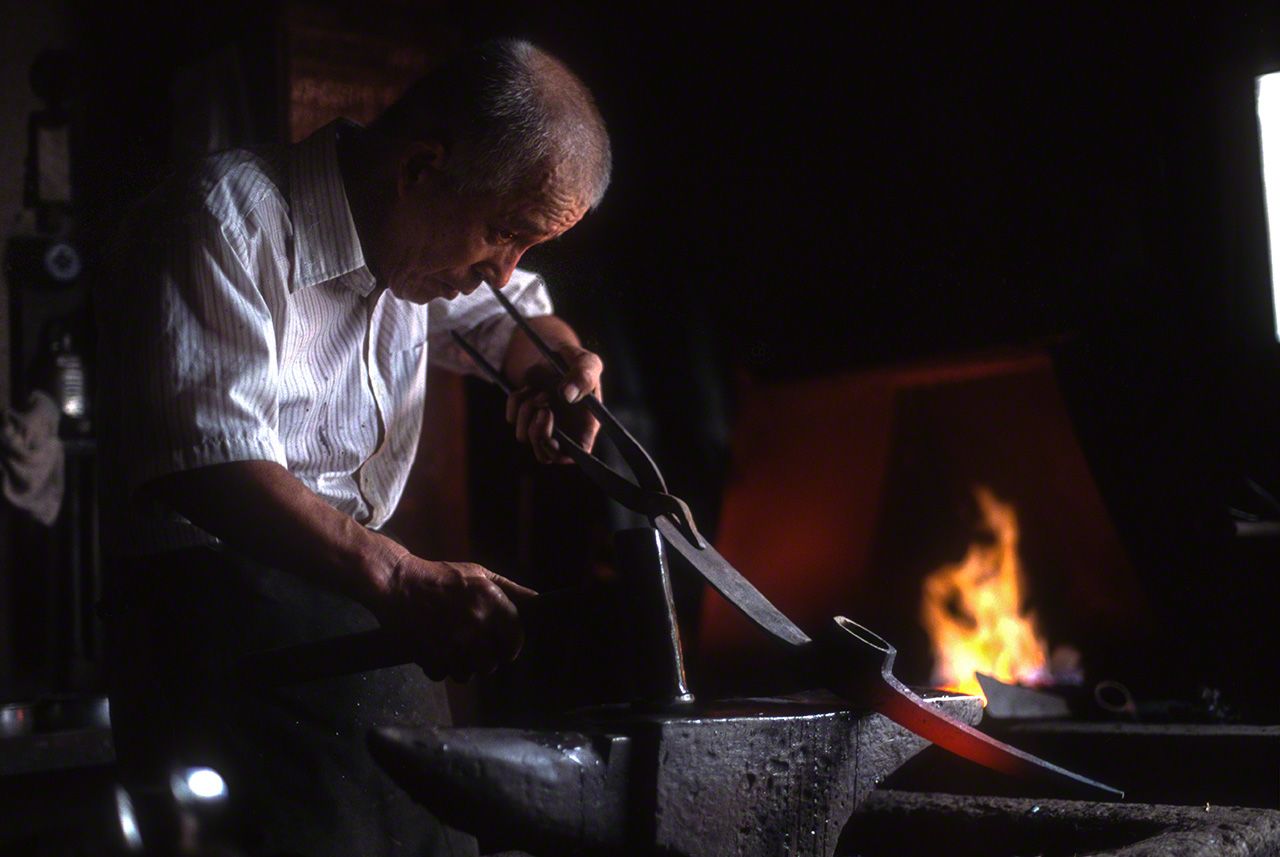 A blacksmith in Ayabe, Kyoto, mends a pick head. 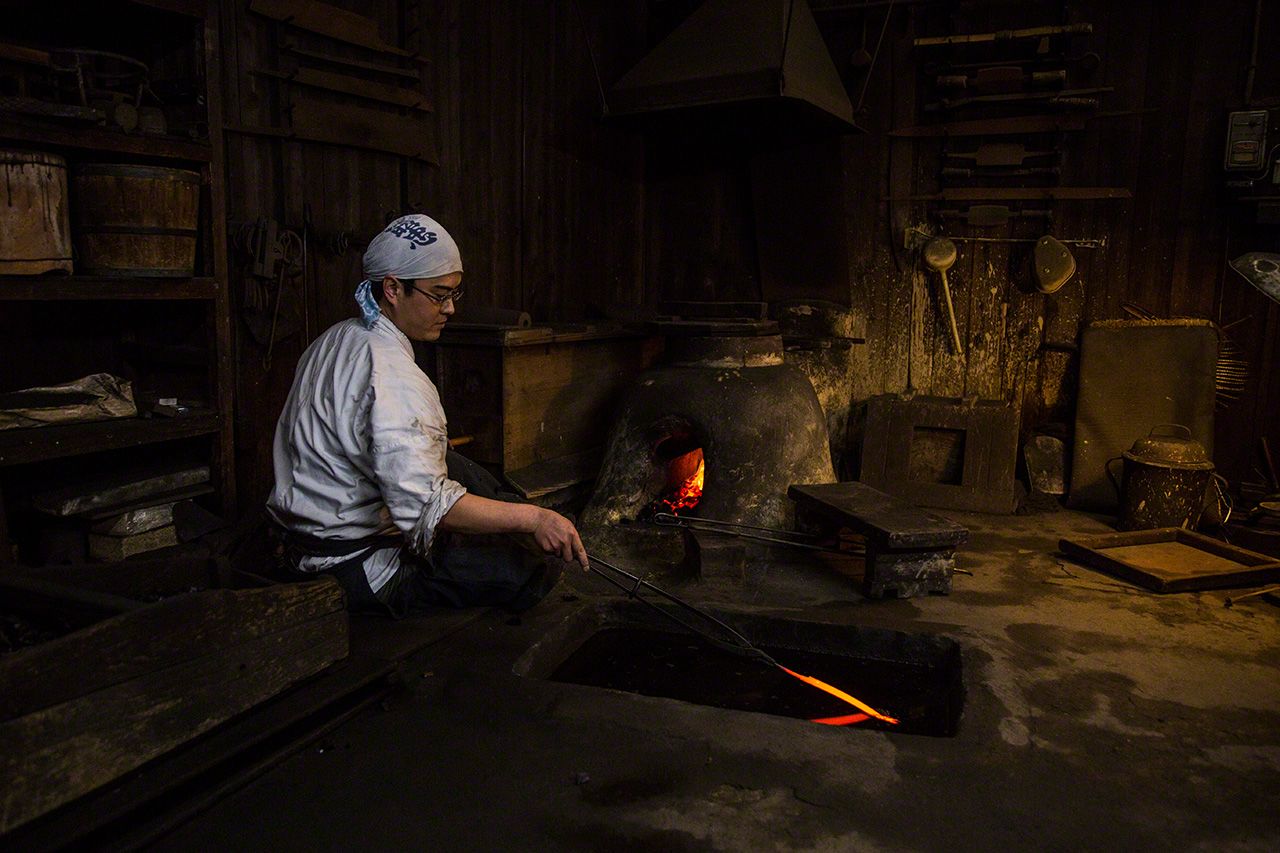 Tempering a sashimi knife at the Mizuno Tanrenjo forge in Sakai, Osaka. 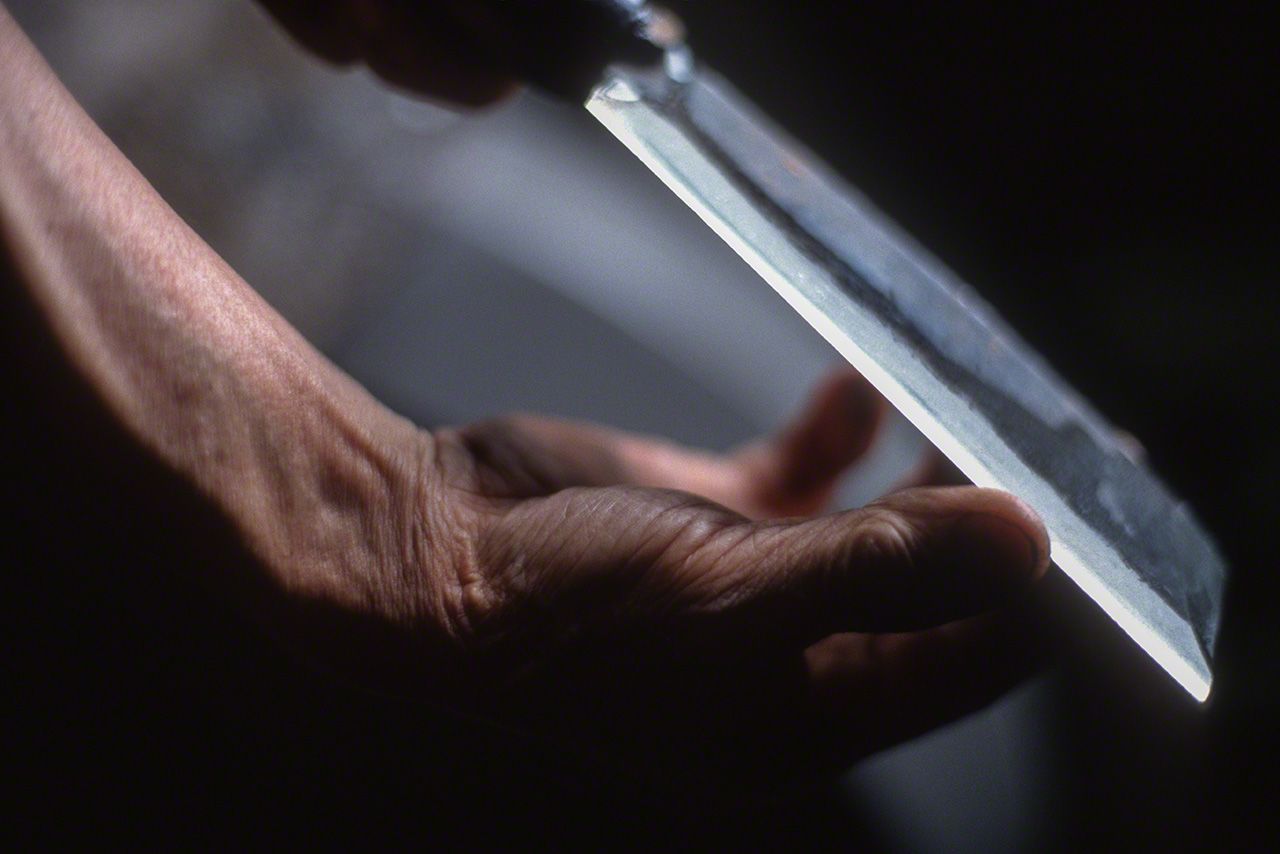 Testing the cutting edge by hand while sharpening a blade at the Taue Kajiya blacksmith in Totsukawa, Nara Prefecture. 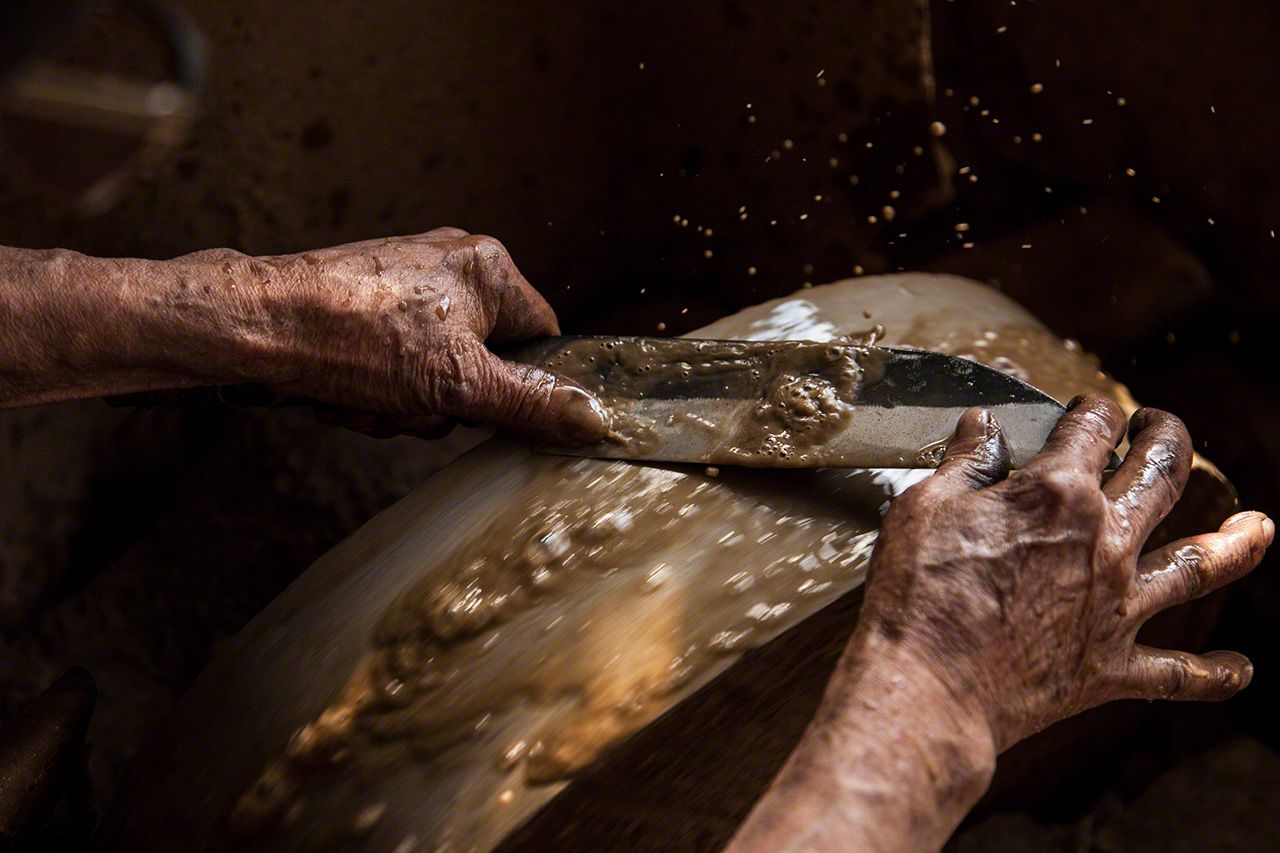 An artisan skillfully sharpens a blade on a rotating grindstone at Andō Yoshihisa’s workshop in Shirata, Aichi Prefecture. 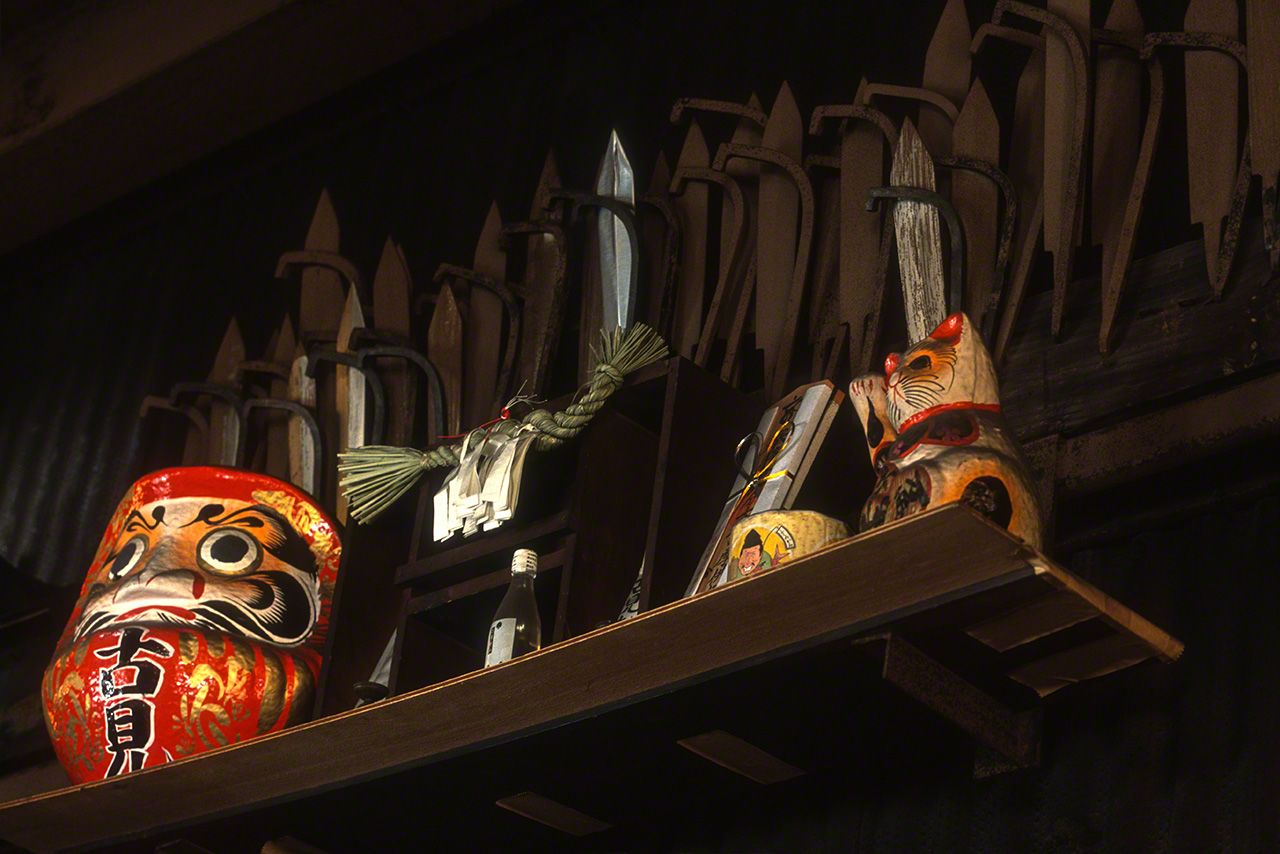 Creating a model sword each January 2 before starting work for the year is a regular tradition at the Furumi Seisakusho workshop in Numata, Gunma Prefecture. 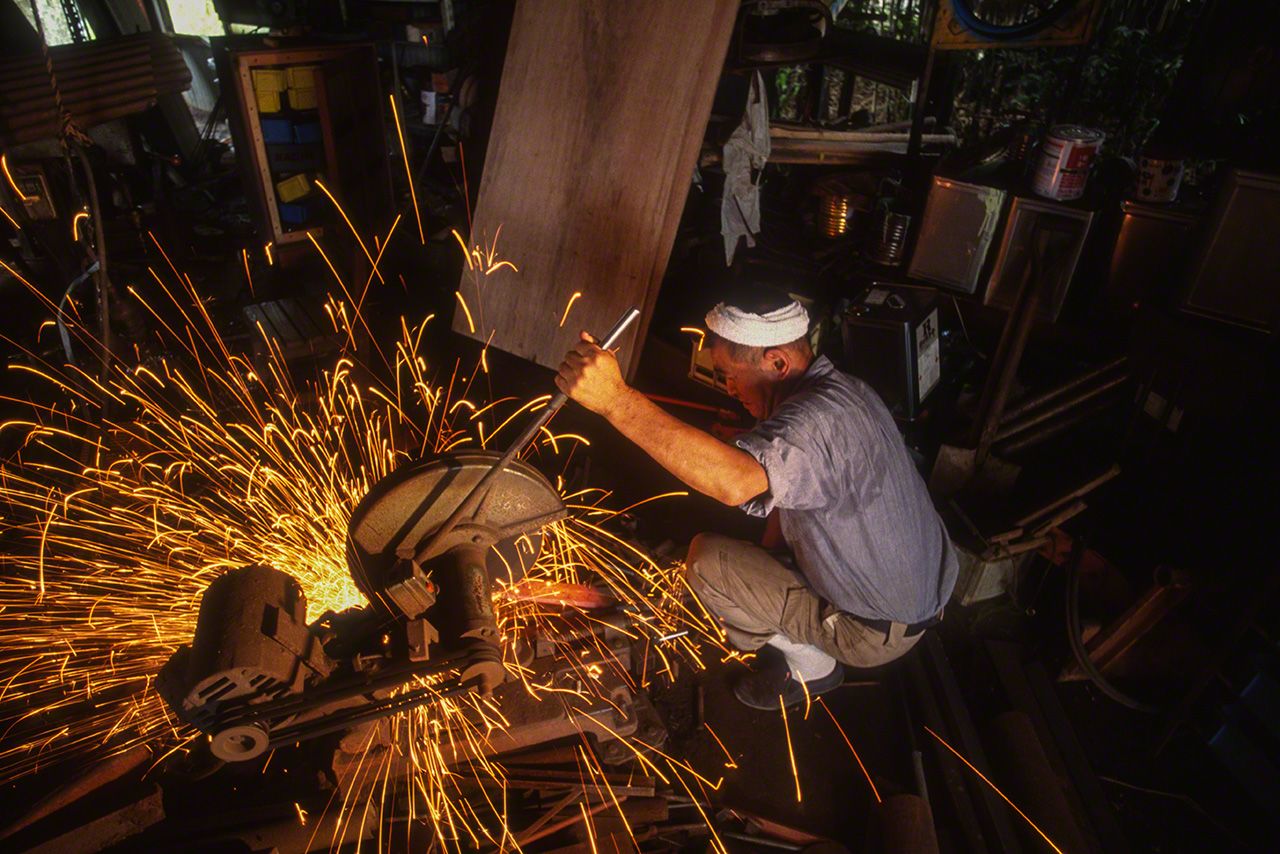 Sparks fly like a firework display when cutting metal at the Nosaka Kajiten blacksmith in Nyūzen, Toyama Prefecture. 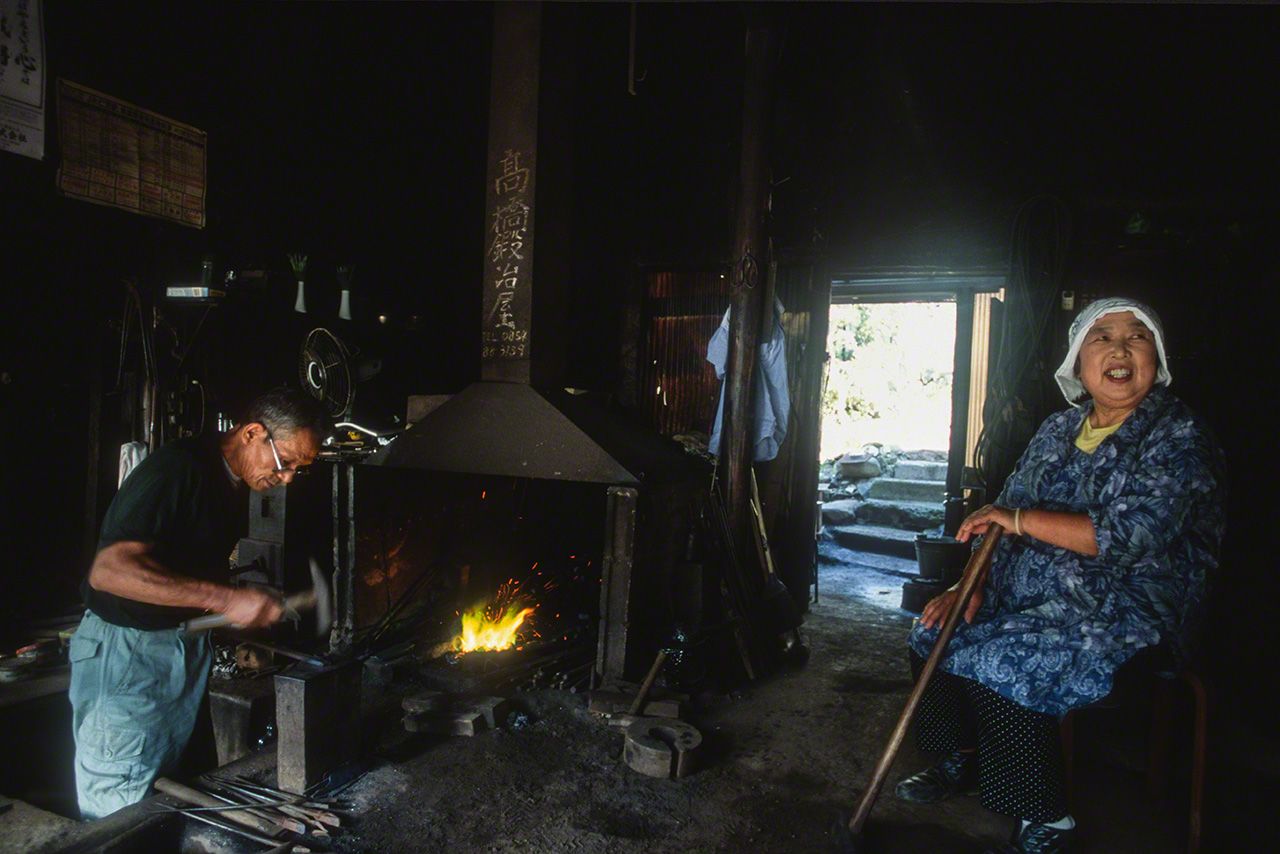 Husband and wife at work together at the Takahashi Kajiya blacksmith in Nima, Shimane Prefecture. 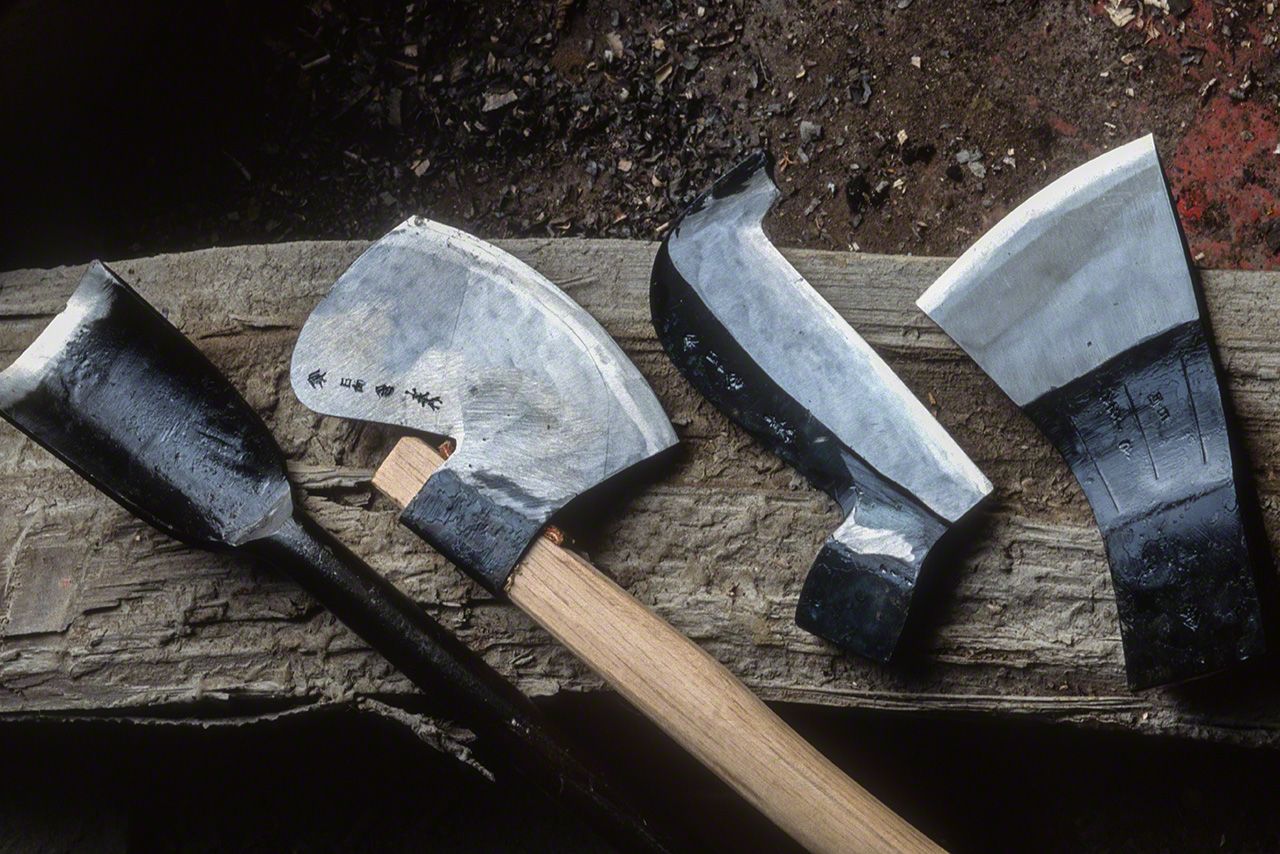 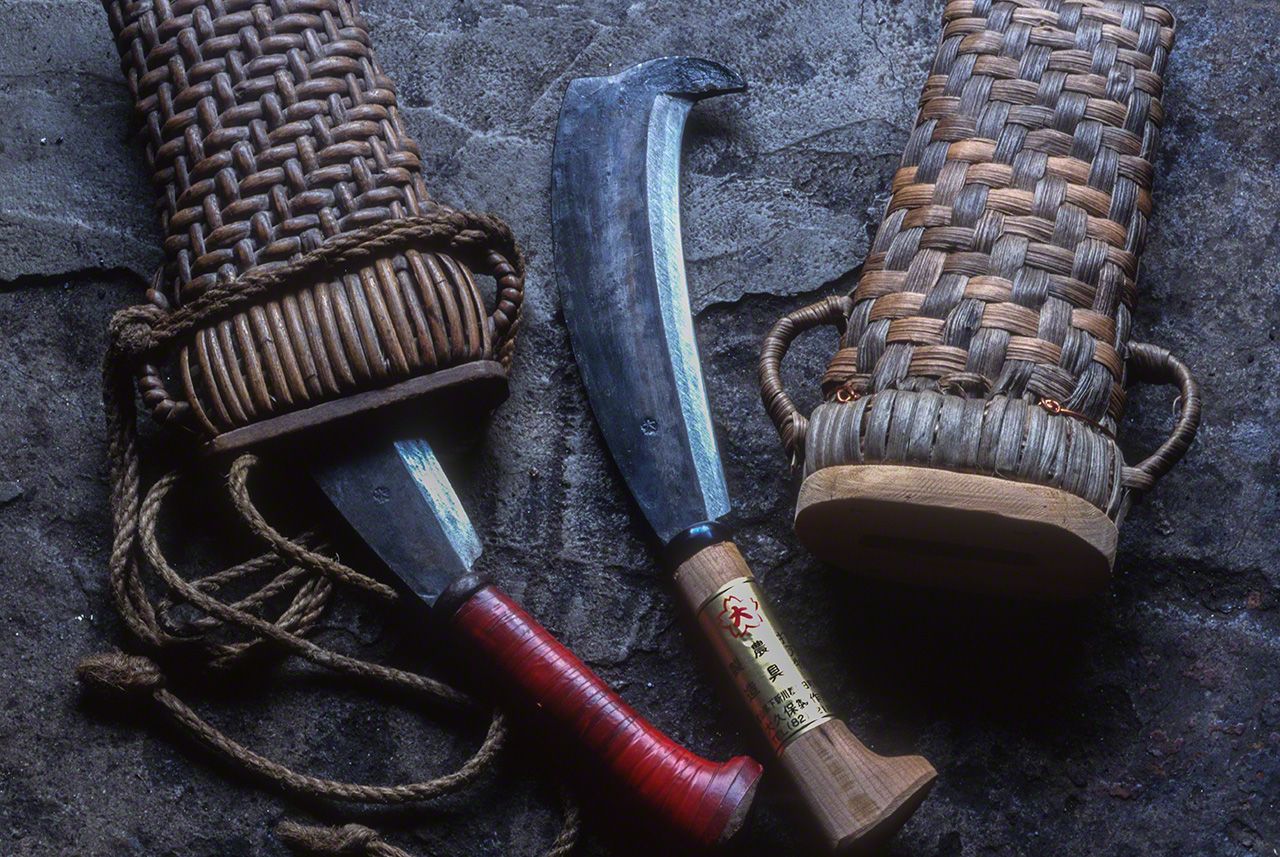