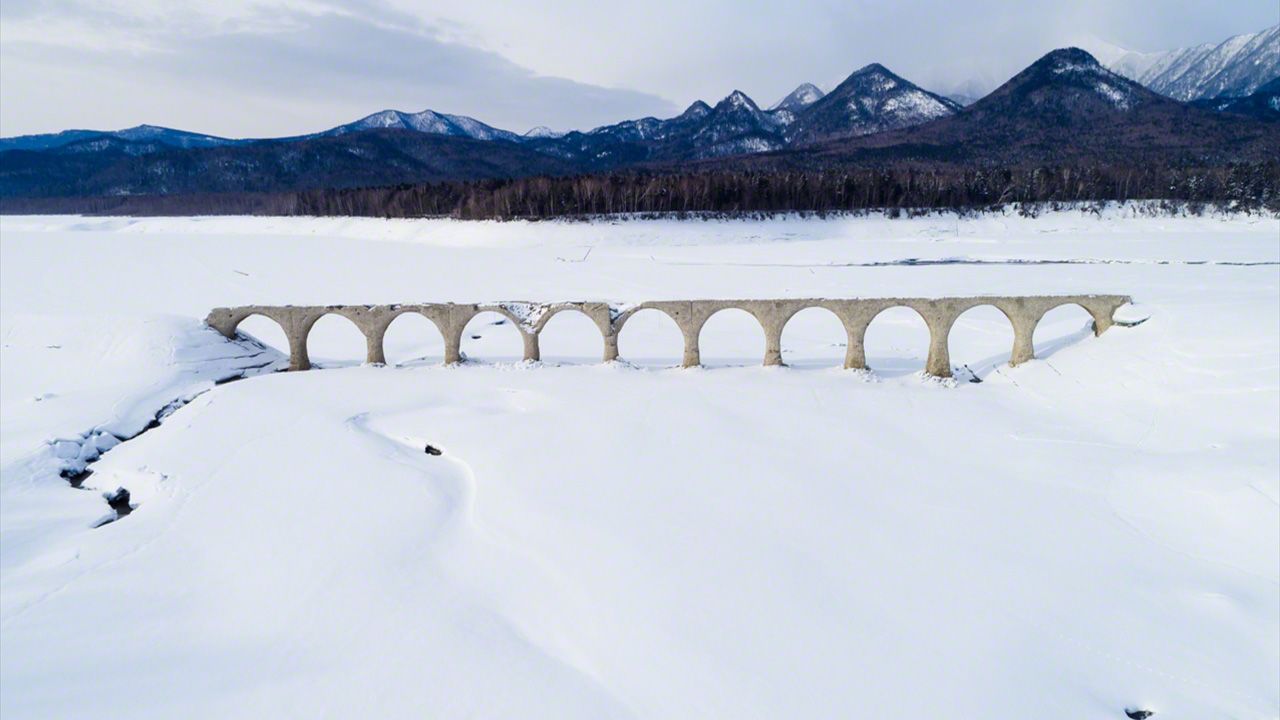 Architecture Travel Feb 10, 2021
The Taushubetsu Bridge in central Hokkaidō is famed for performing a seasonal disappearing act. Known as the “phantom bridge,” the crumbling concrete span gradually vanishes beneath the waters of Lake Nukabira as the snow melts, only to reappear at winter’s end. A photographer documents the scenic bridge and its natural surroundings.

In the far north of Japan, an arched bridge that eternally seems on the brink of collapse stands in the waters of Lake Nukabira in the Daisetsuzan National Park, Hokkaidō Prefecture. The Taushubetsu Bridge has gained renown as an unexplored tourist destination in recent years. In the past, the span carried trains across the waters of the Taushubetsu River, but nowadays, it is known as the “phantom bridge.”

The bridge was built in 1937 as part of an extension of the Japan National Railways Shihoro Line to the scenic Tokachi-Mitsumata area. Late, the line was rerouted to accommodate the construction of a hydroelectric dam on the river. In 1955, the completion of the project created Lake Nukabira. This was the start of Japan’s period of rapid economic growth, which may have contributed to the decision to forego tearing down the bridge and instead allowing it to be engulfed in the rising waters of the lake.

Different Faces of the “Phantom Bridge”

Drawn by my love of Hokkaidō, I moved to the prefecture from Saitama. I started photographing the bridge in 2005 after learning about it while I was working at a hot spring resort in a town near Lake Nukabira. At the time, there were few visitors compared to now, and people were convinced that the crumbling span would collapse any day.

The phantom bridge is changing shape as it slowly deteriorates, and it occurred to me that as someone who visits it regularly, I could document its decaying form through the seasons. In Hokkaidō, where the changing of the seasons happens like clockwork, these ruins, standing against the background of the magnificent landscape of the Daisetsuzan National Park, constitute a unique subject. Added to that, the changing levels of Lake Nukabira make for a different view day by day.

The high demand for electricity in winter lowers the water level of Lake Nukabira, which is at its highest toward the end of autumn and lowest in early spring. The difference in water level is about 30 meters, and as the lake rises the Taushubetsu Bridge disappears, only to reemerge later in the year. Normally, it is completely submerged by late fall, where it remains until January, when it rises from the frozen surface.

The bridge is 130 meters long and 11 meters wide. It is impossible to guess the extent of damage the concrete structure suffers being submerged each year and then being exposed to the elements, including harsh snowstorms, strong sunlight, and winter temperatures that can drop to minus 25 degrees Celsius, turning the water absorbed by the concrete to ice. The thick layer of snow and ice that covers the surface of the lake also chips away at the concrete. The Taushubetsu Bridge has weathered these unforgiving conditions for more than half a century, bringing the structure ever closer to its inevitable collapse. 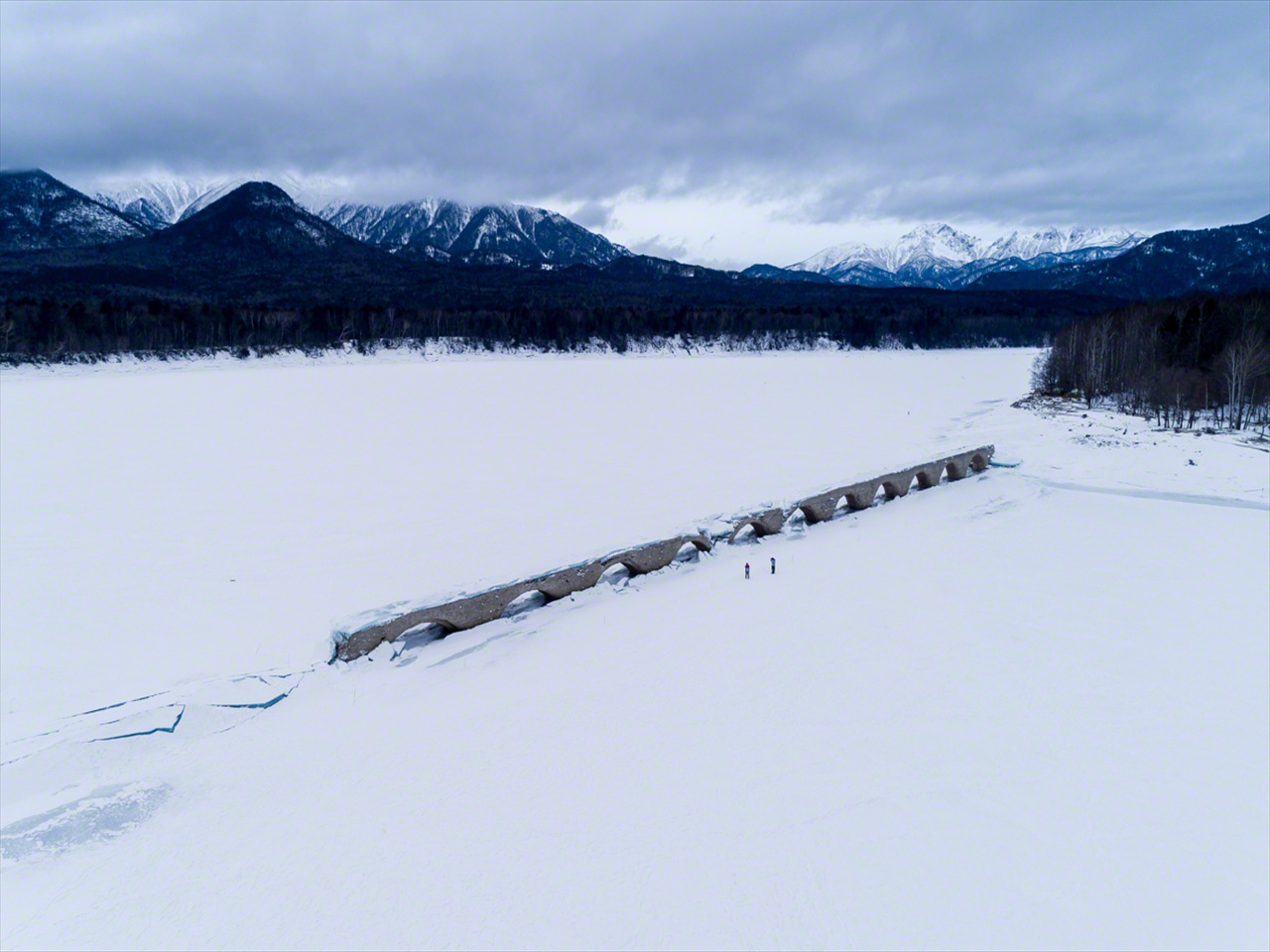 The waters of Lake Nukabira start to drop in January, and the bridge becomes visible on the frozen surface. The mountains of the Daisetsuzan National Park are seen in the background. 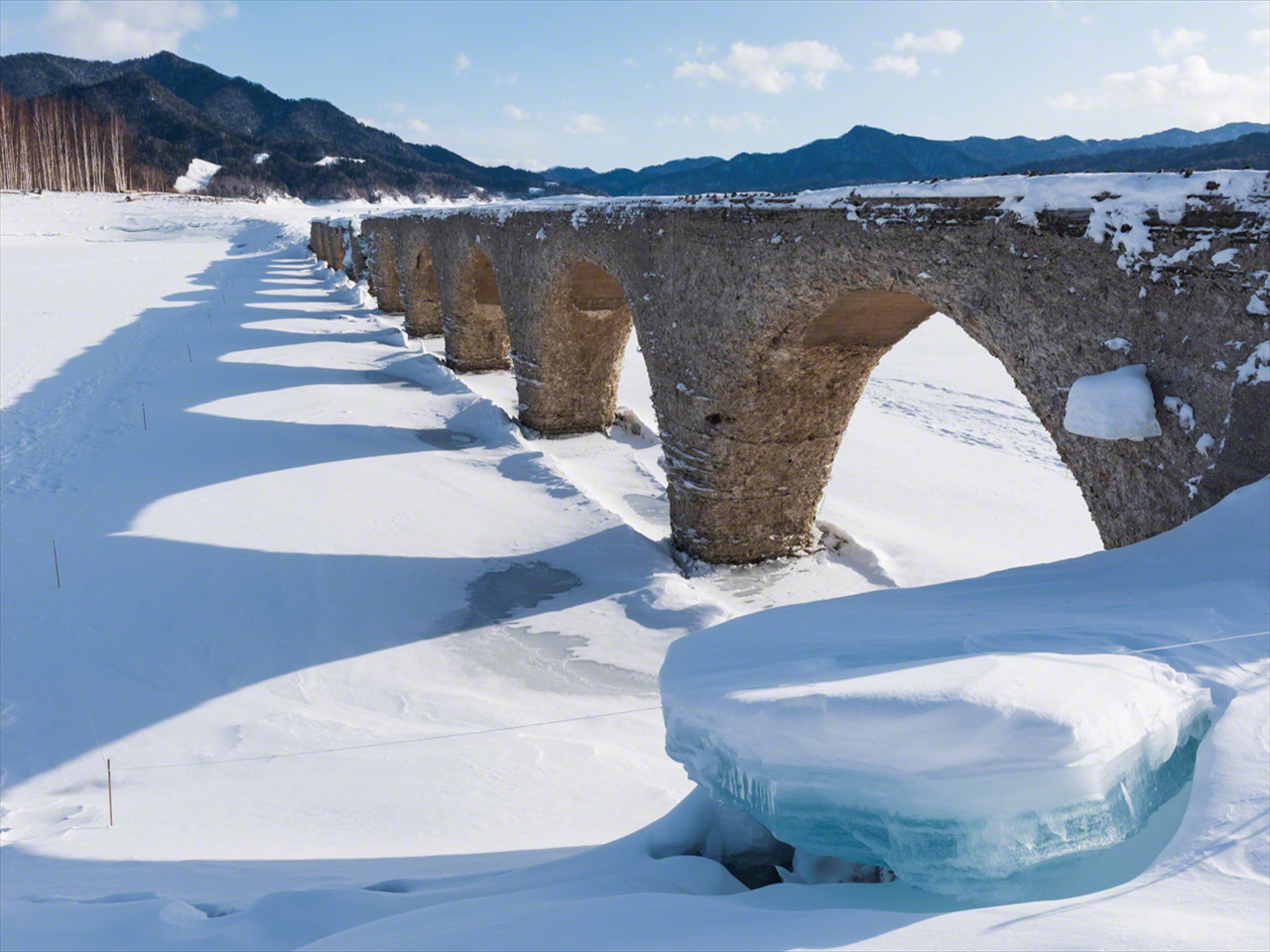 In February, the bridge stands out amid the frozen landscape, with thick ice forming on the lake as temperatures drop as low as minus 25 degrees Celsius. 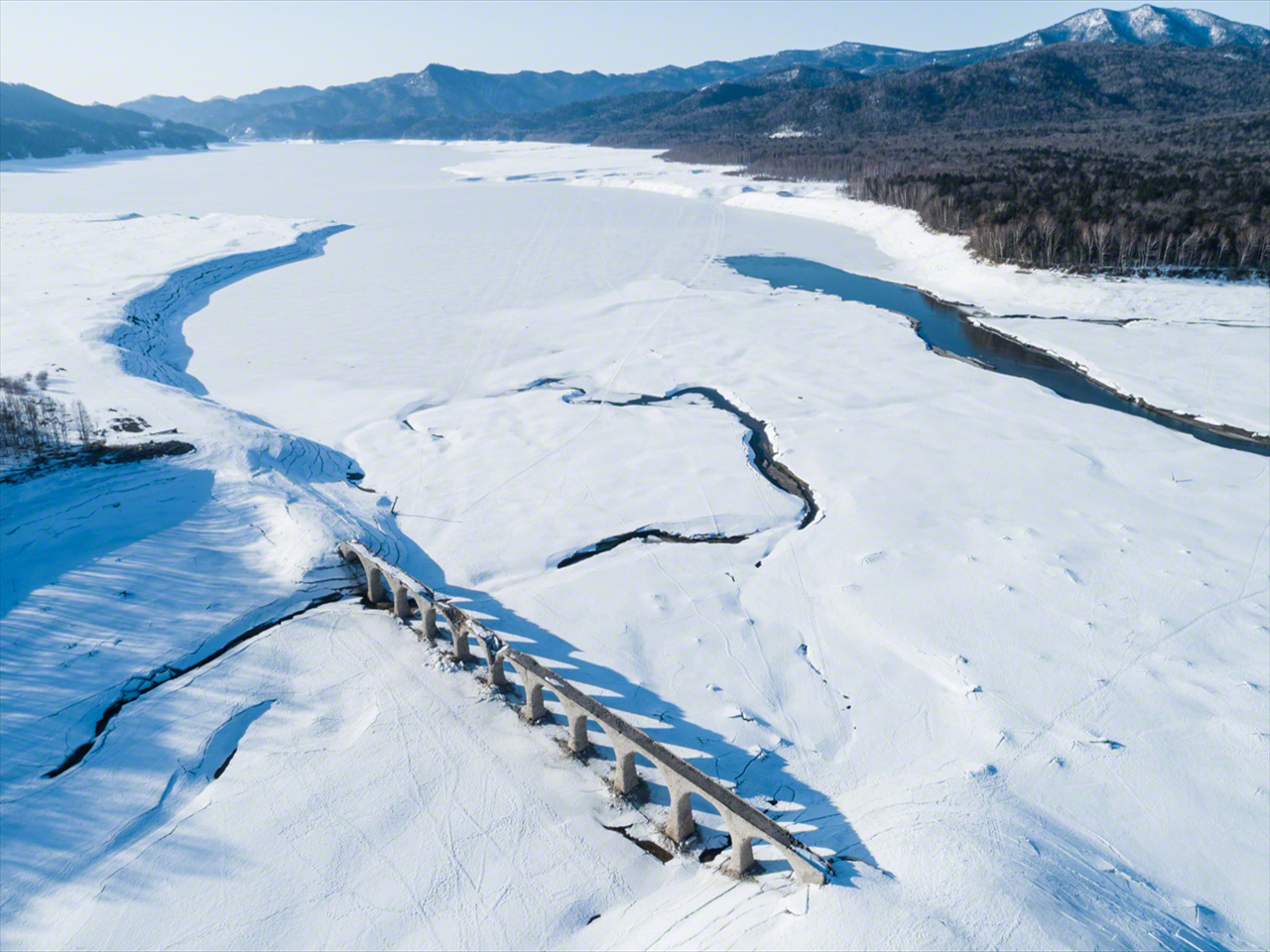 In March, ice and snow cover Lake Nukabira. The Otofuke river is seen flowing on the right. 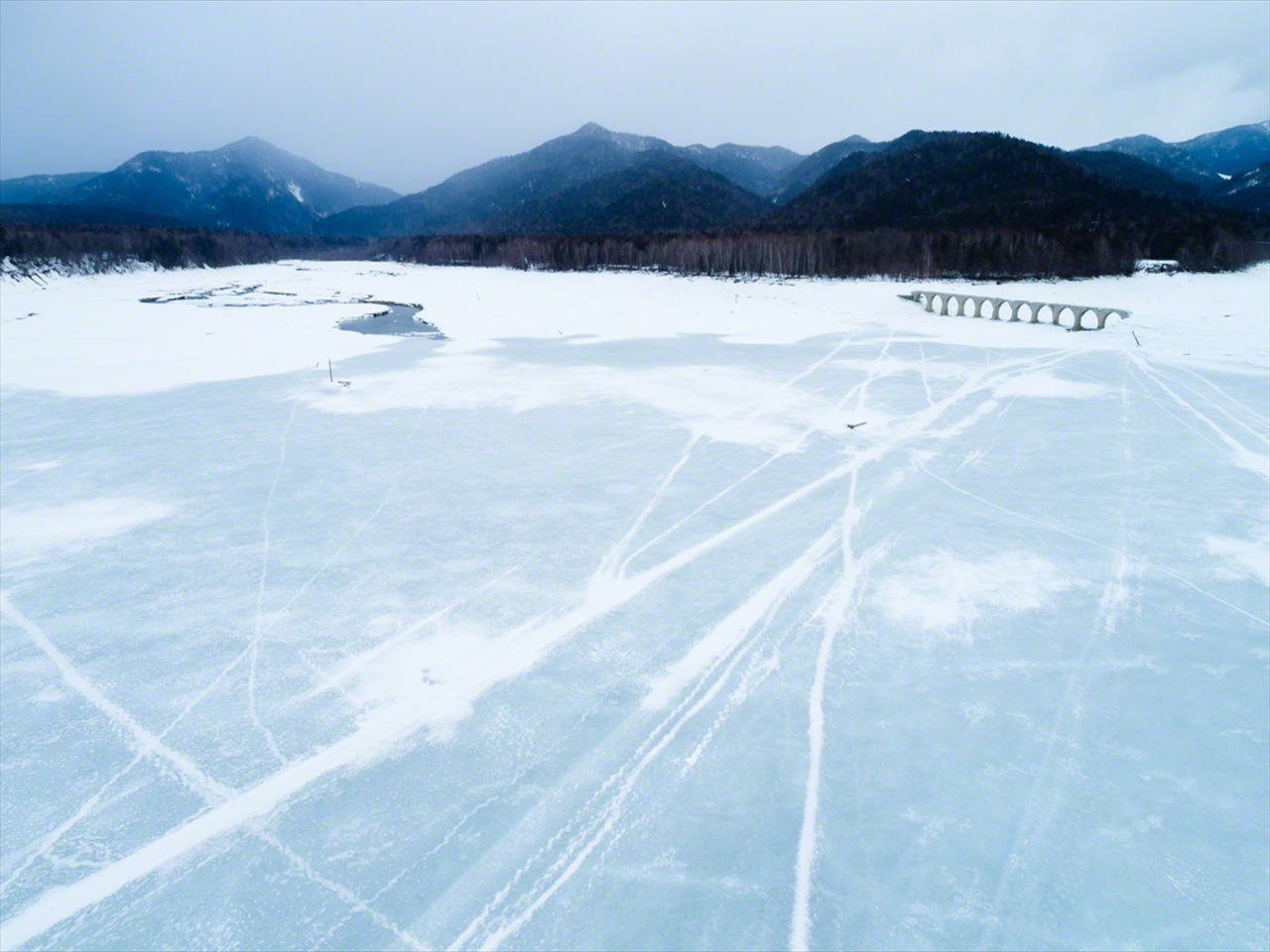 The ice on the lake grows fragile in March, making it dangerous to venture onto the surface. 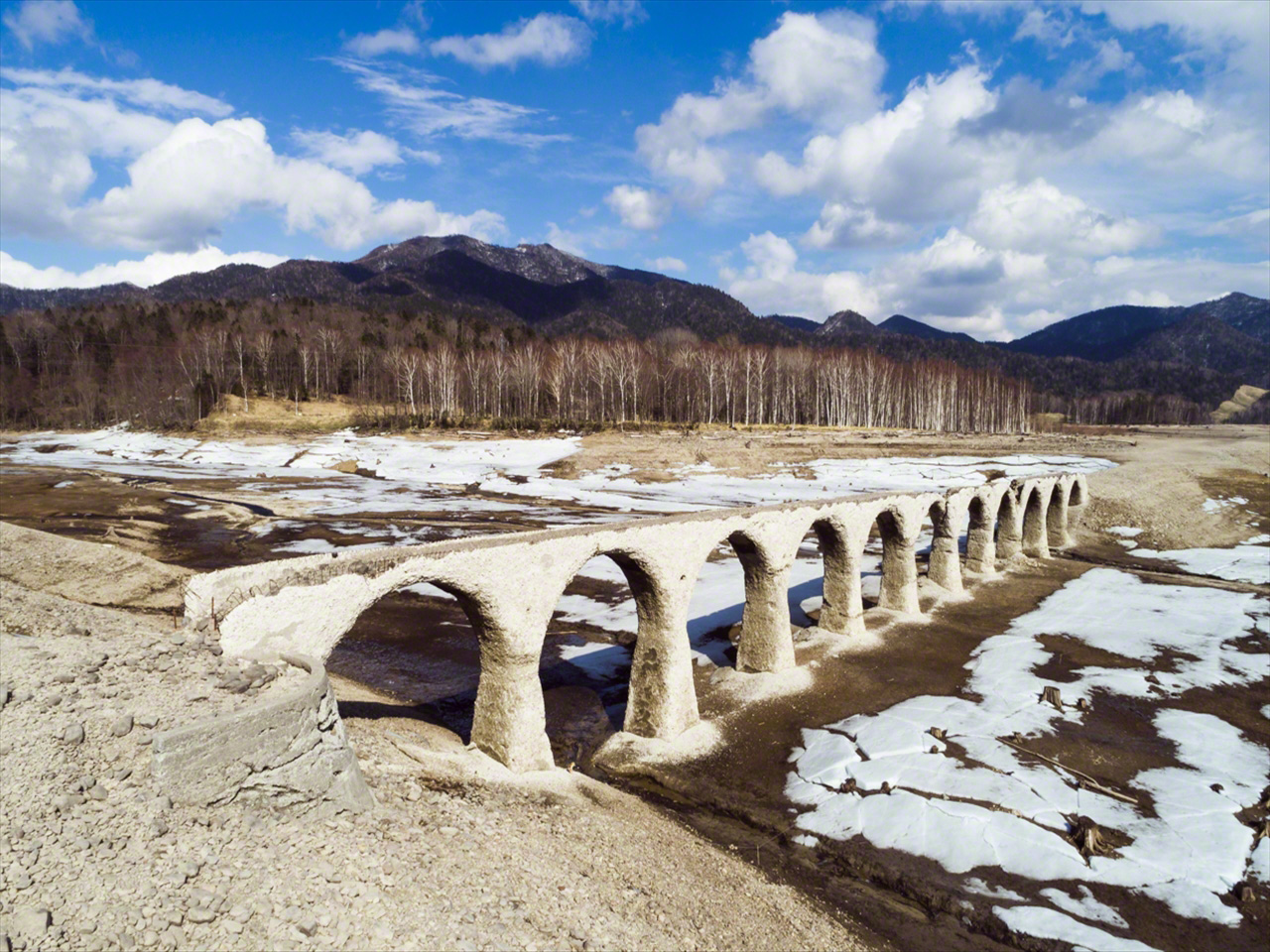 In April, the ice is gone, but snow lingers on the ground. 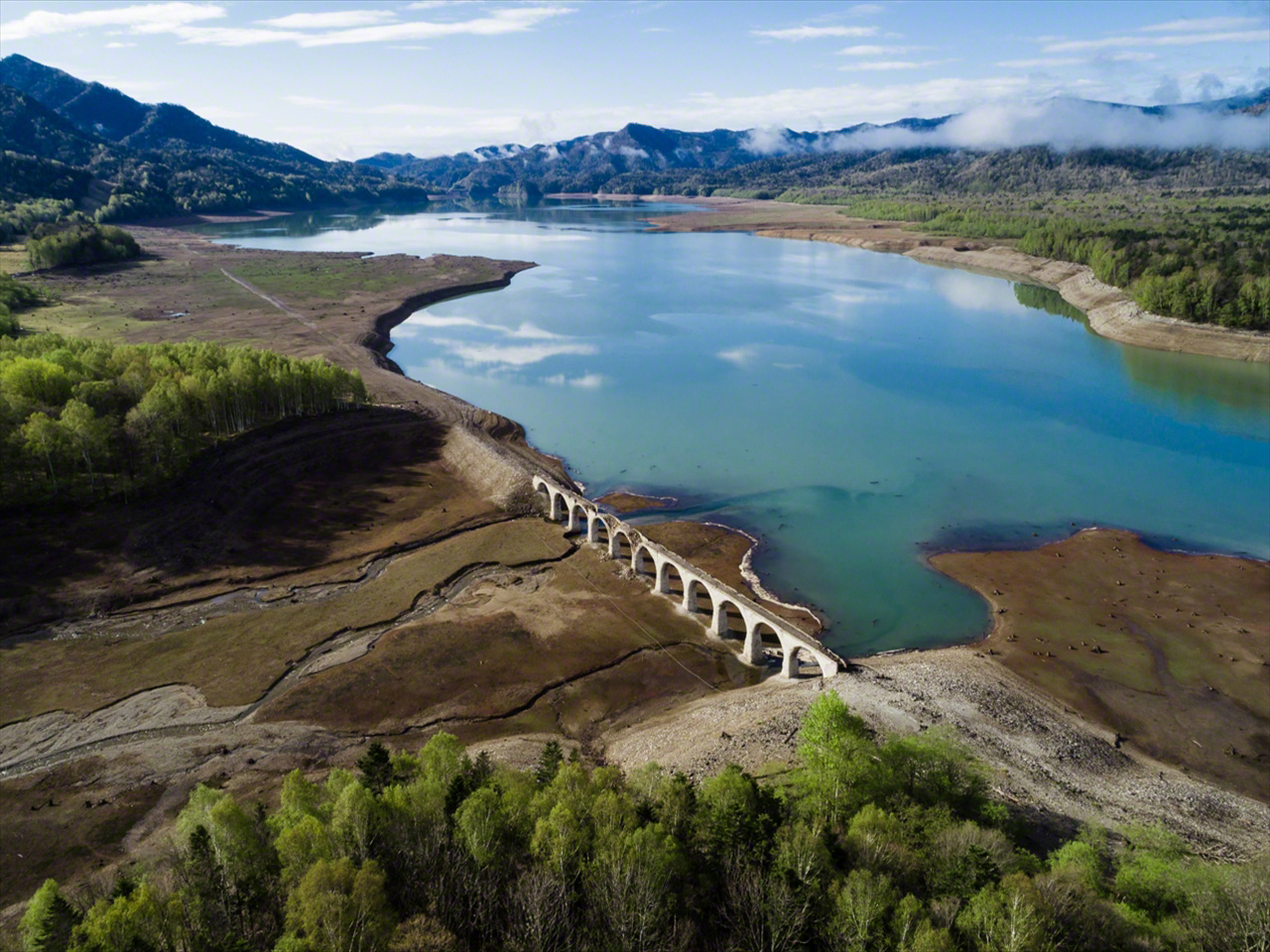 In May, the surrounding forest shimmers with new foliage. The run-off from snow flows into the lake, bringing the water level gradually closer to the bridge. 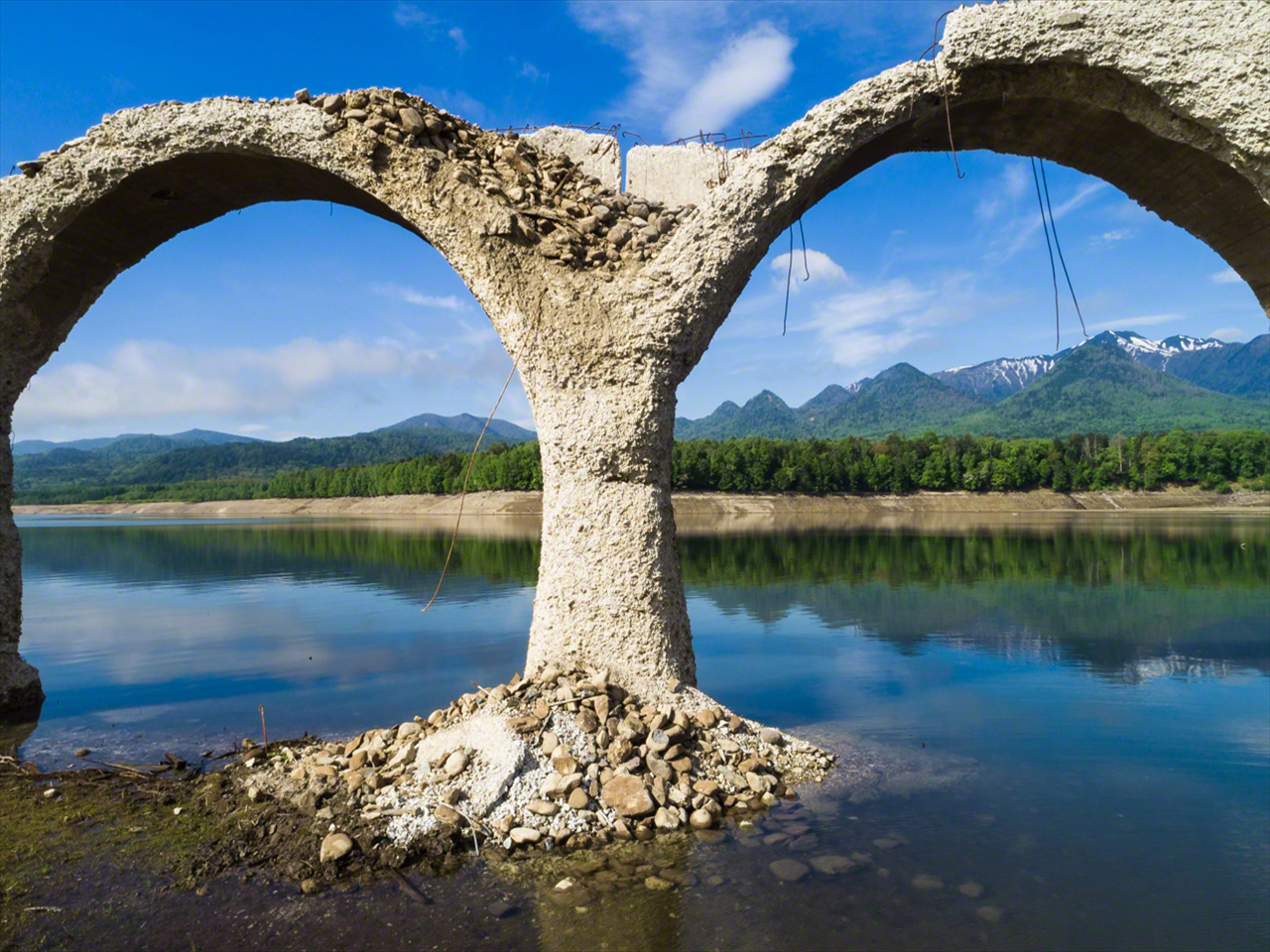 In June, water starts to cover rubble along a crumbling section of the bridge. 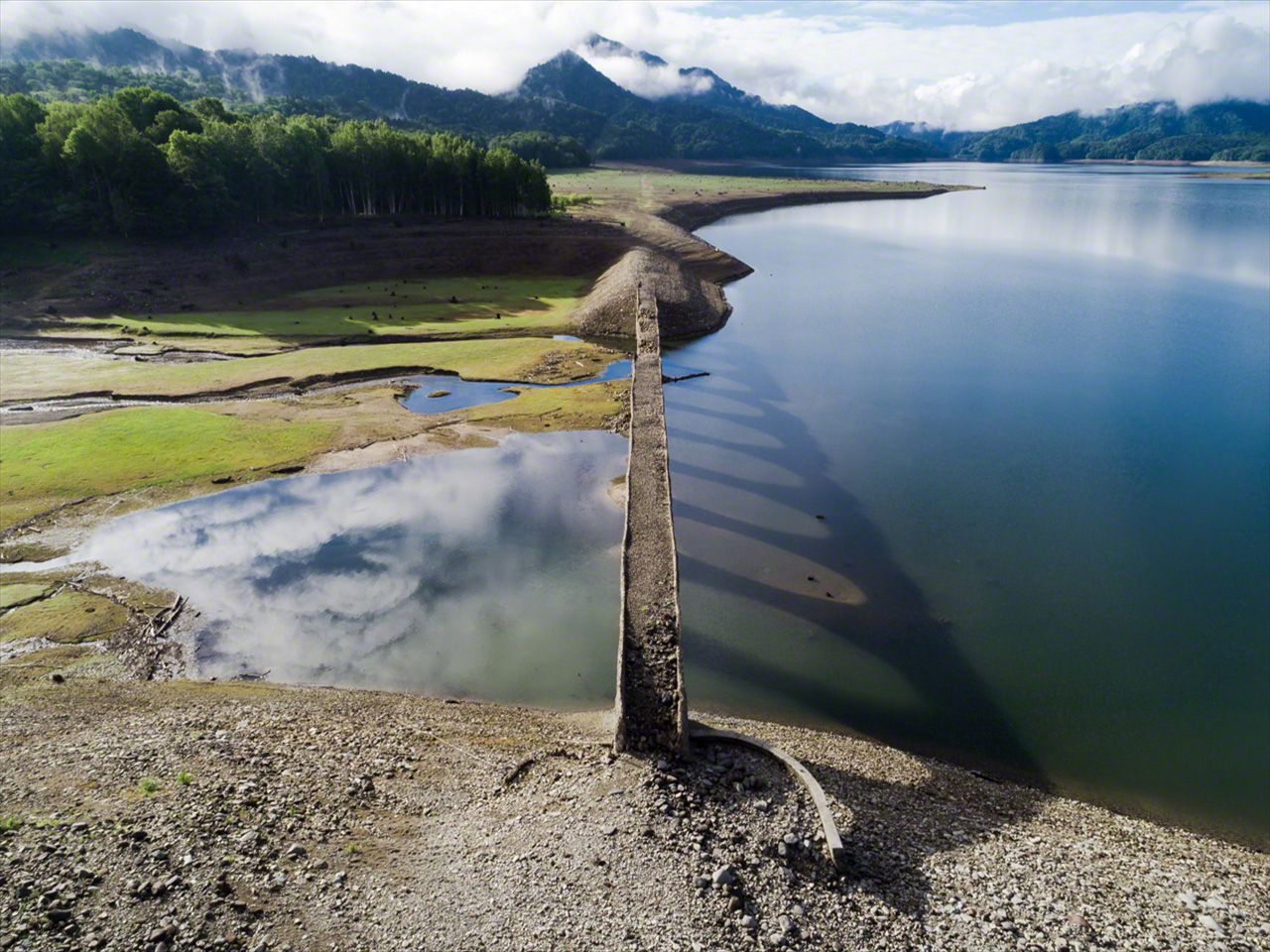 Come June, it is almost possible to imagine the trains that once rumbled across the bridge. 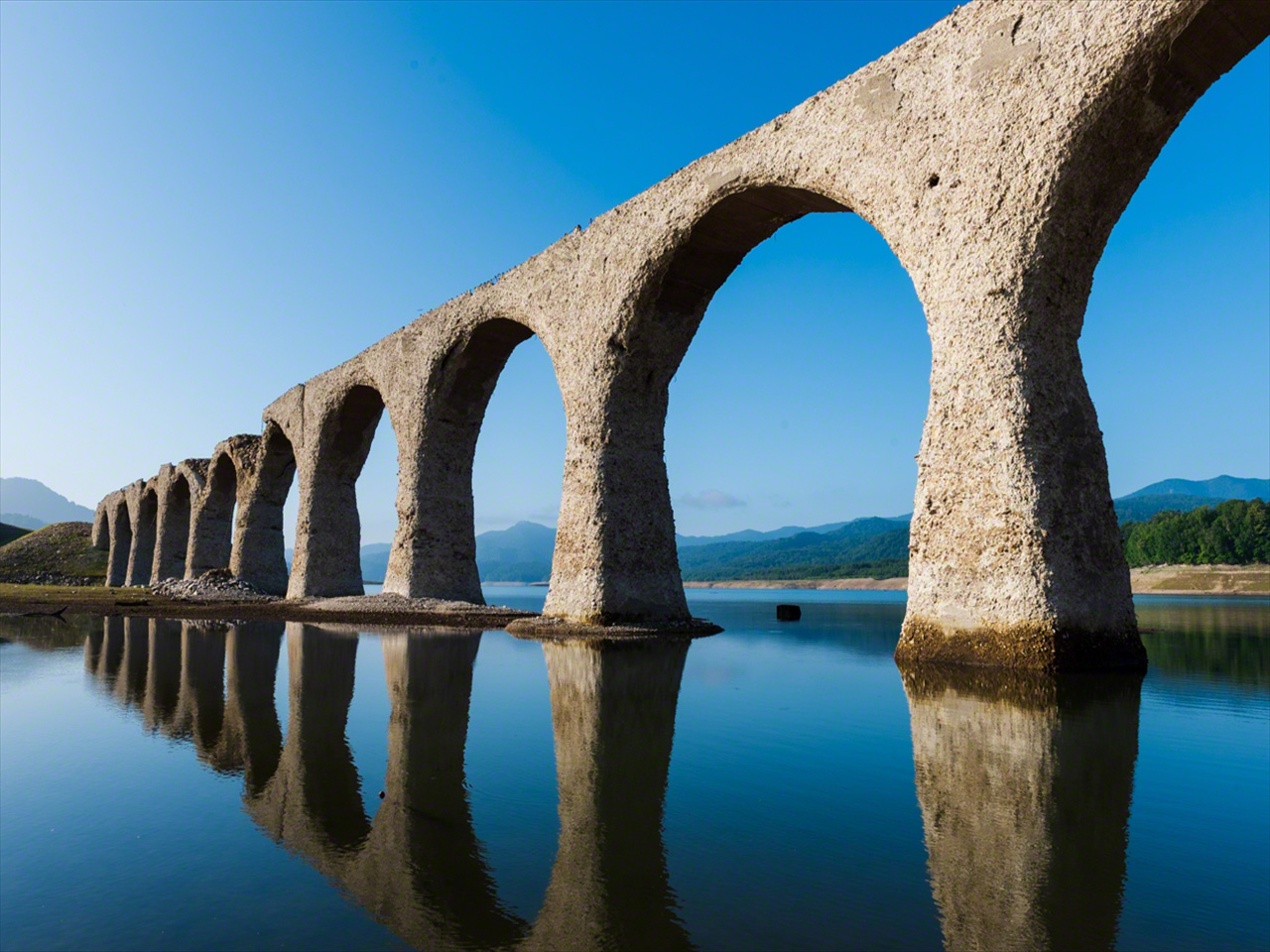 The arches reflect in the water on a windless July morning, lending the span its other nickname, the “spectacle bridge.” 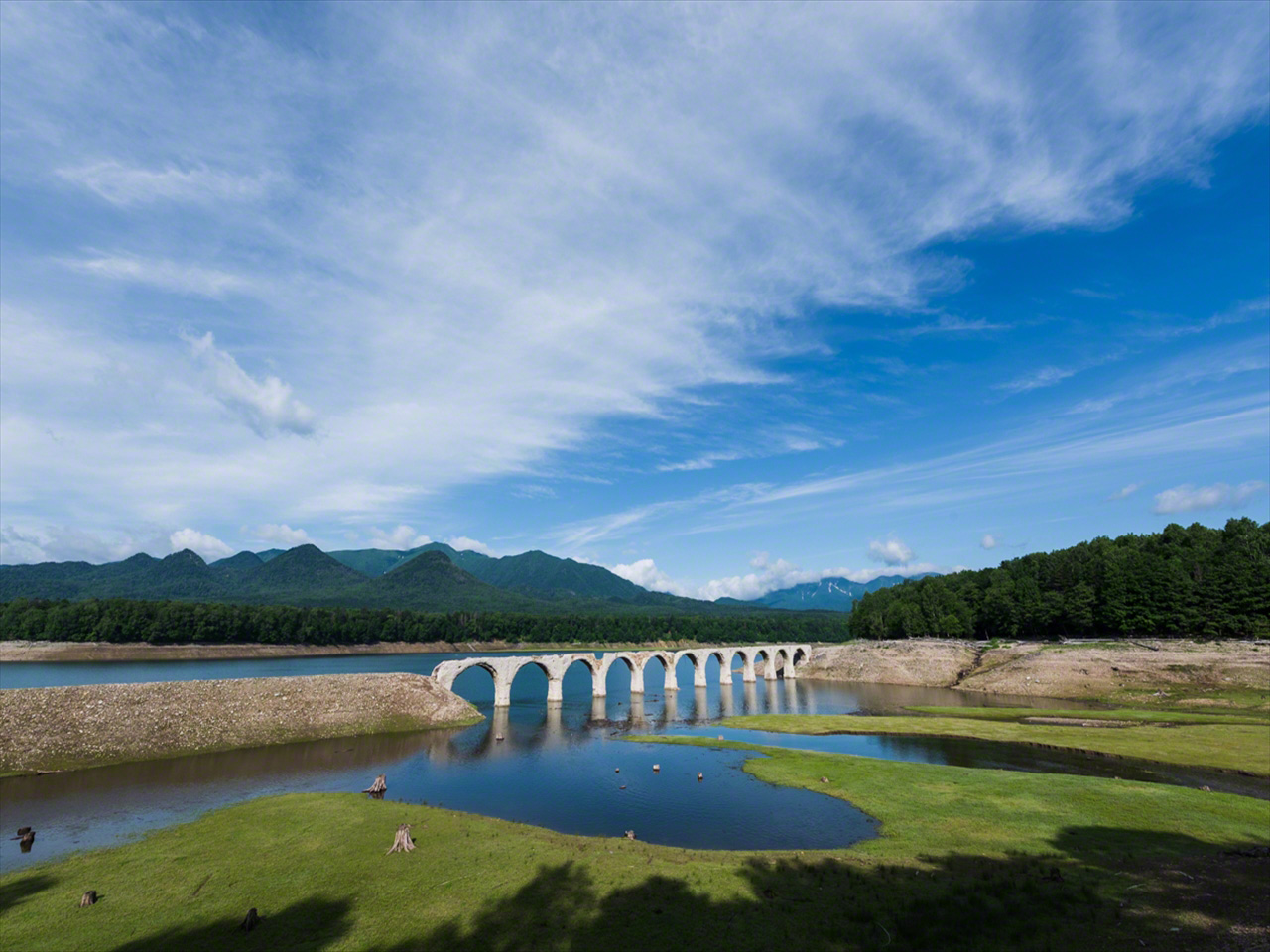 The bridge blends in with the surrounding nature under Hokkaidō’s limpid July skies. 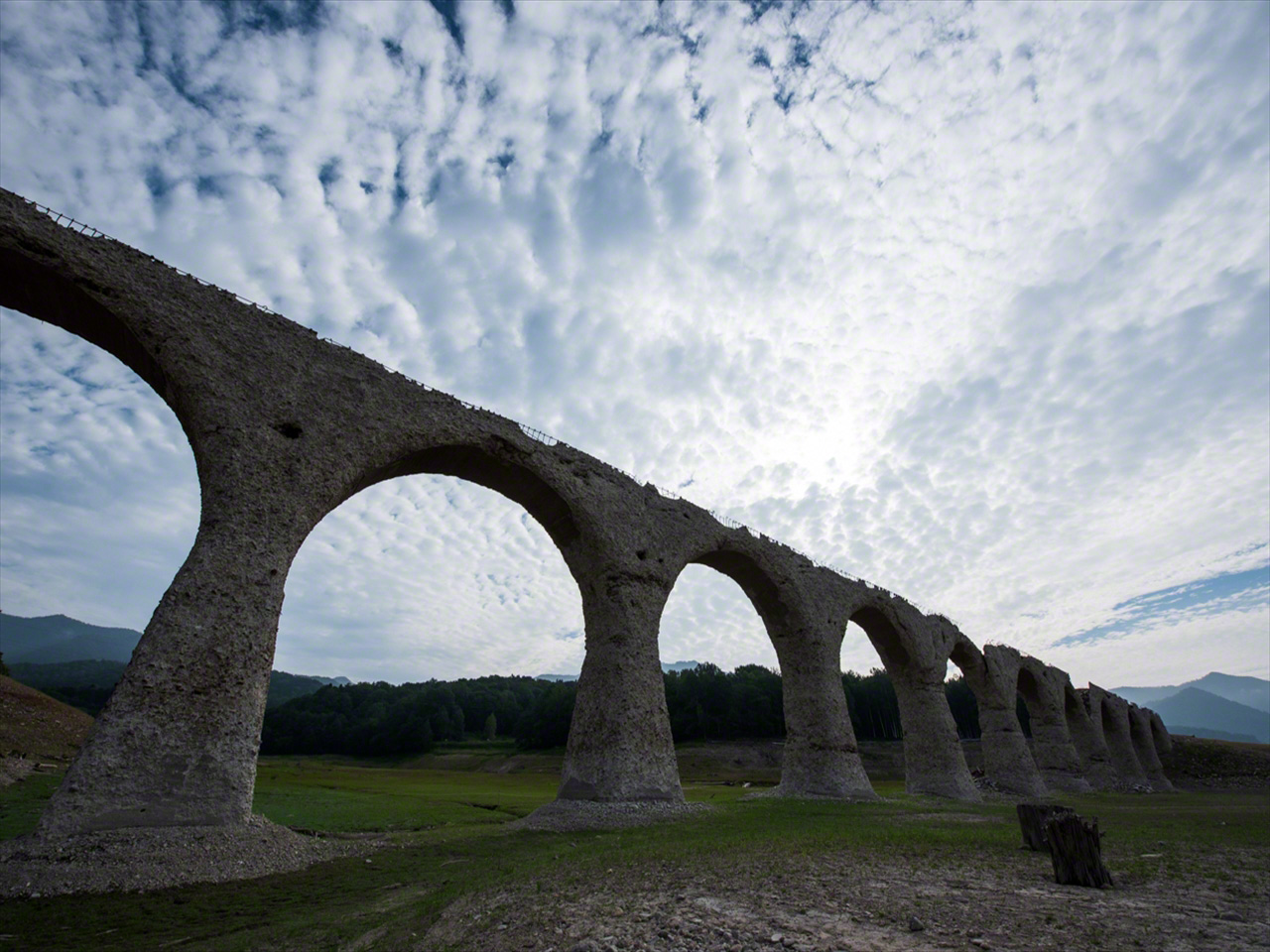 The air in Hokkaidō starts to get cooler in the second half of August. 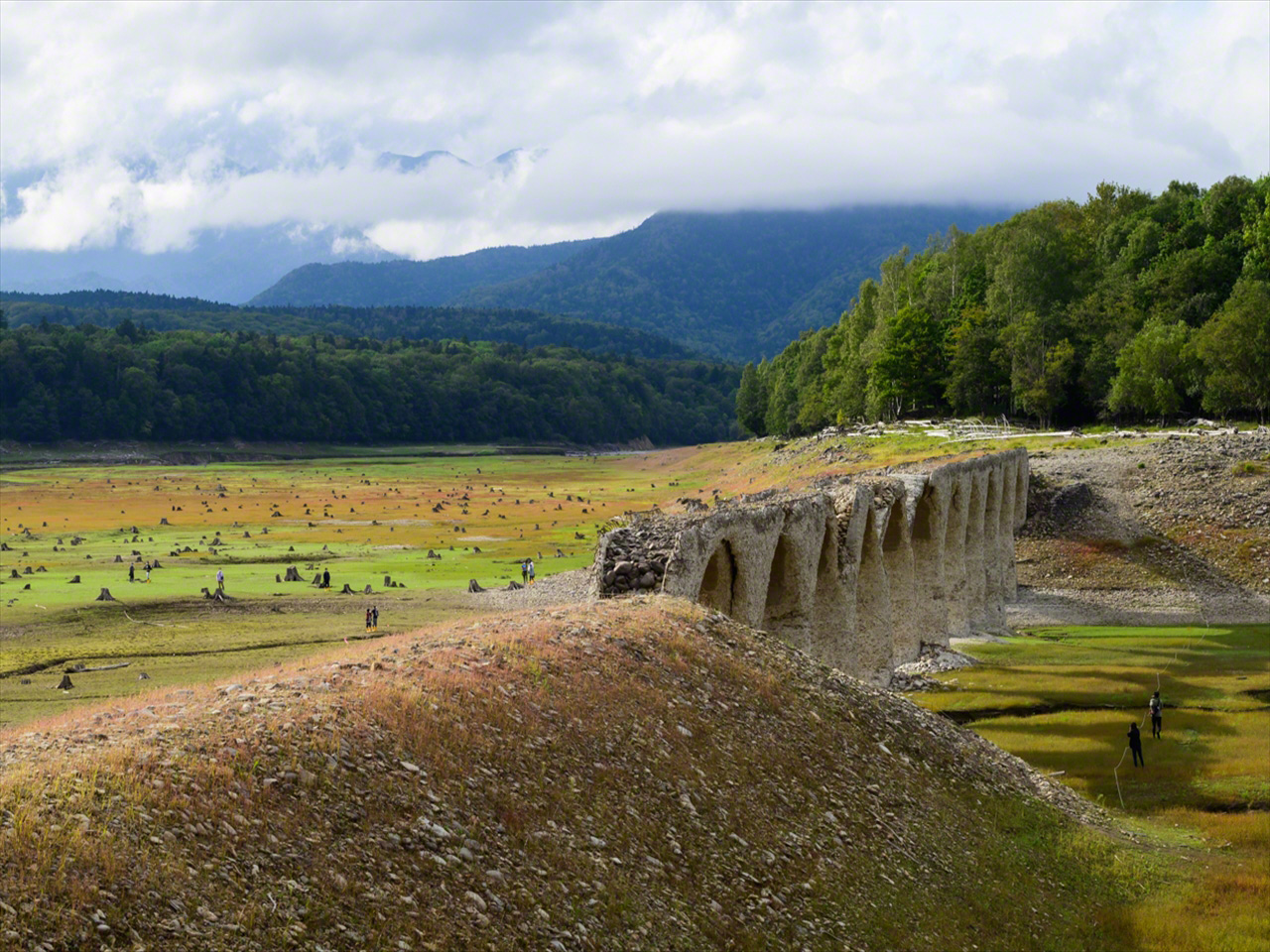 A dry lake bed is a very unusual sight, even in September. 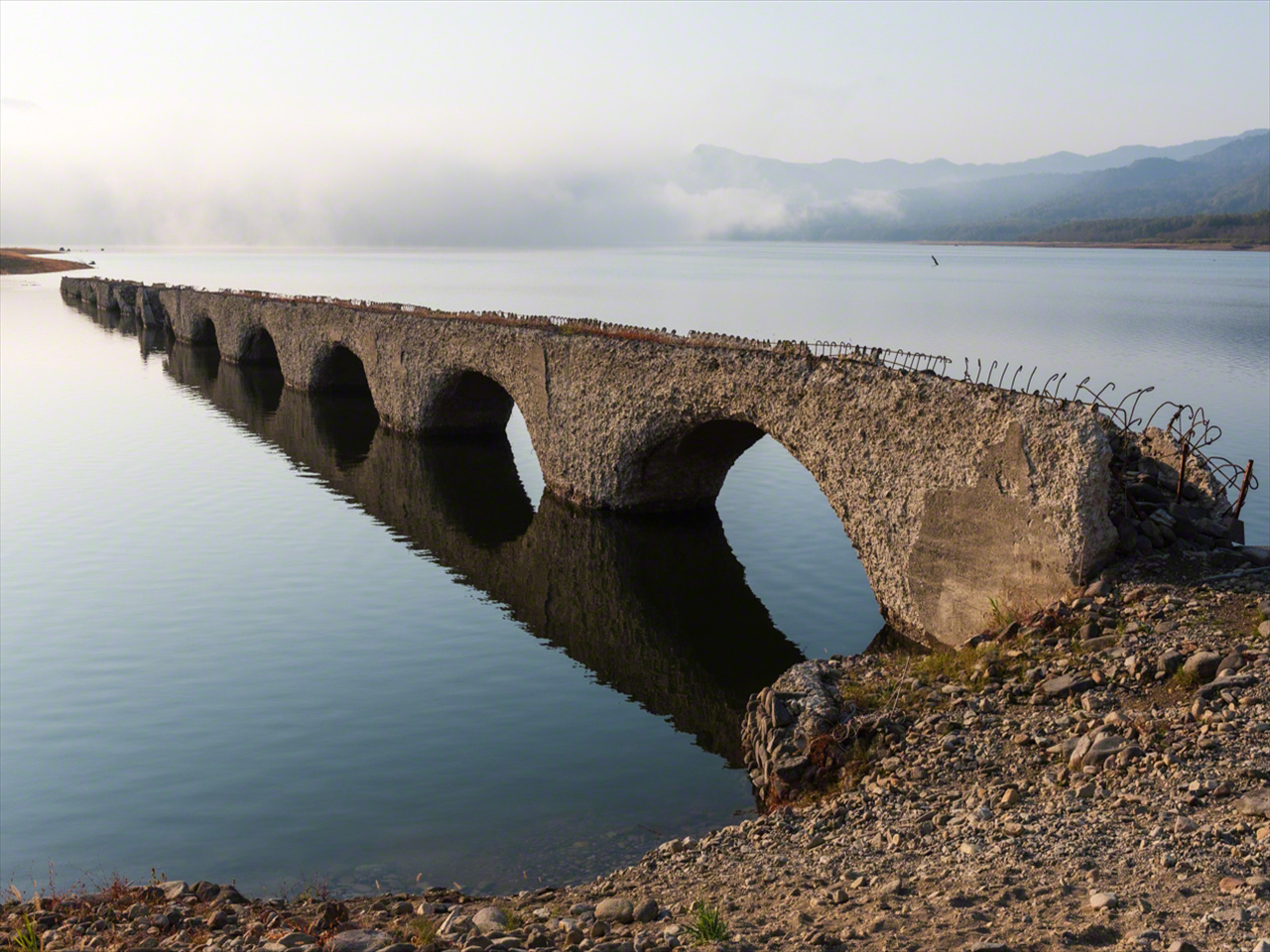 As the level of the lake rises with the approach of winter, about 70% of the bridge is submerged by October. 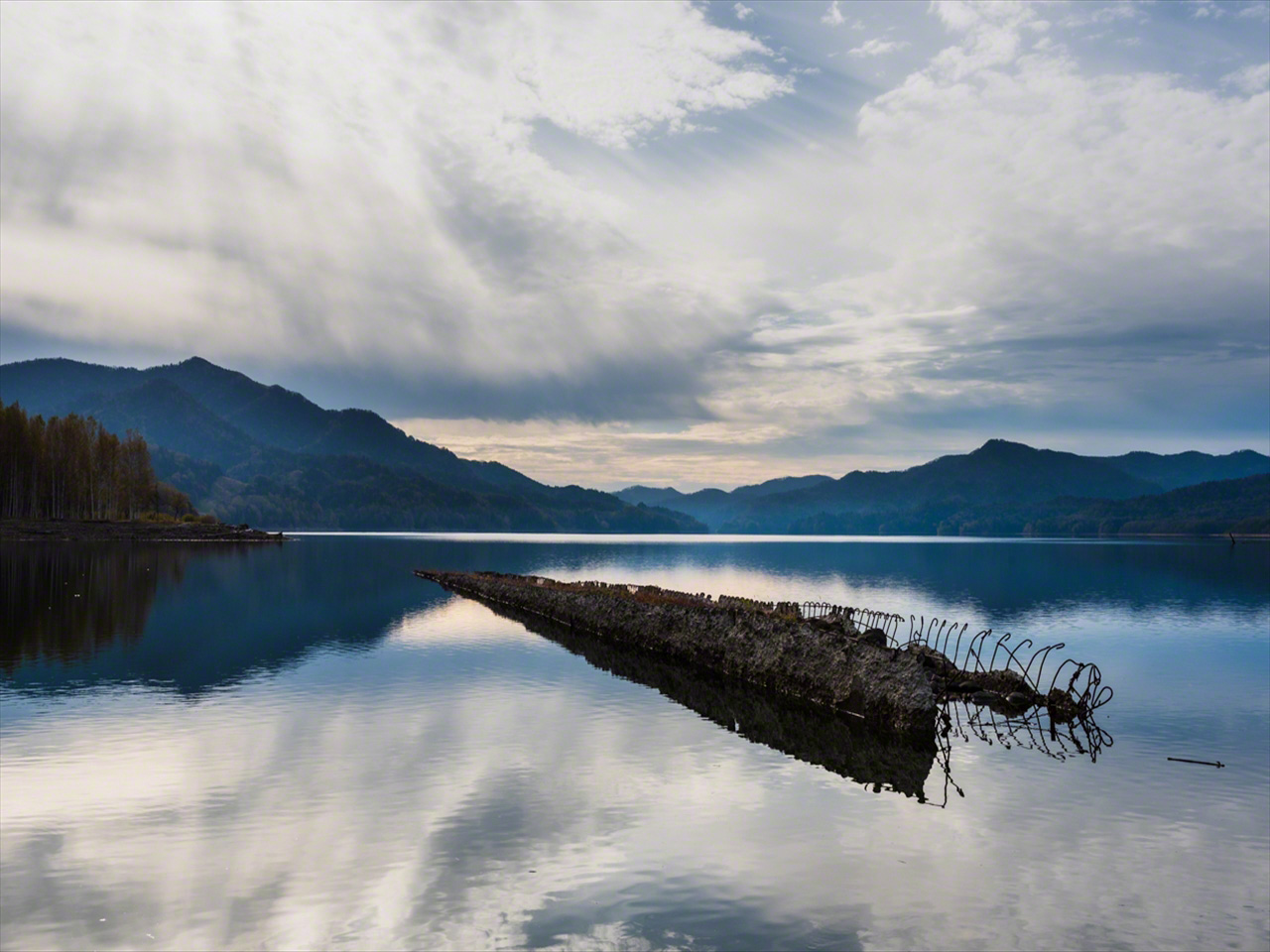 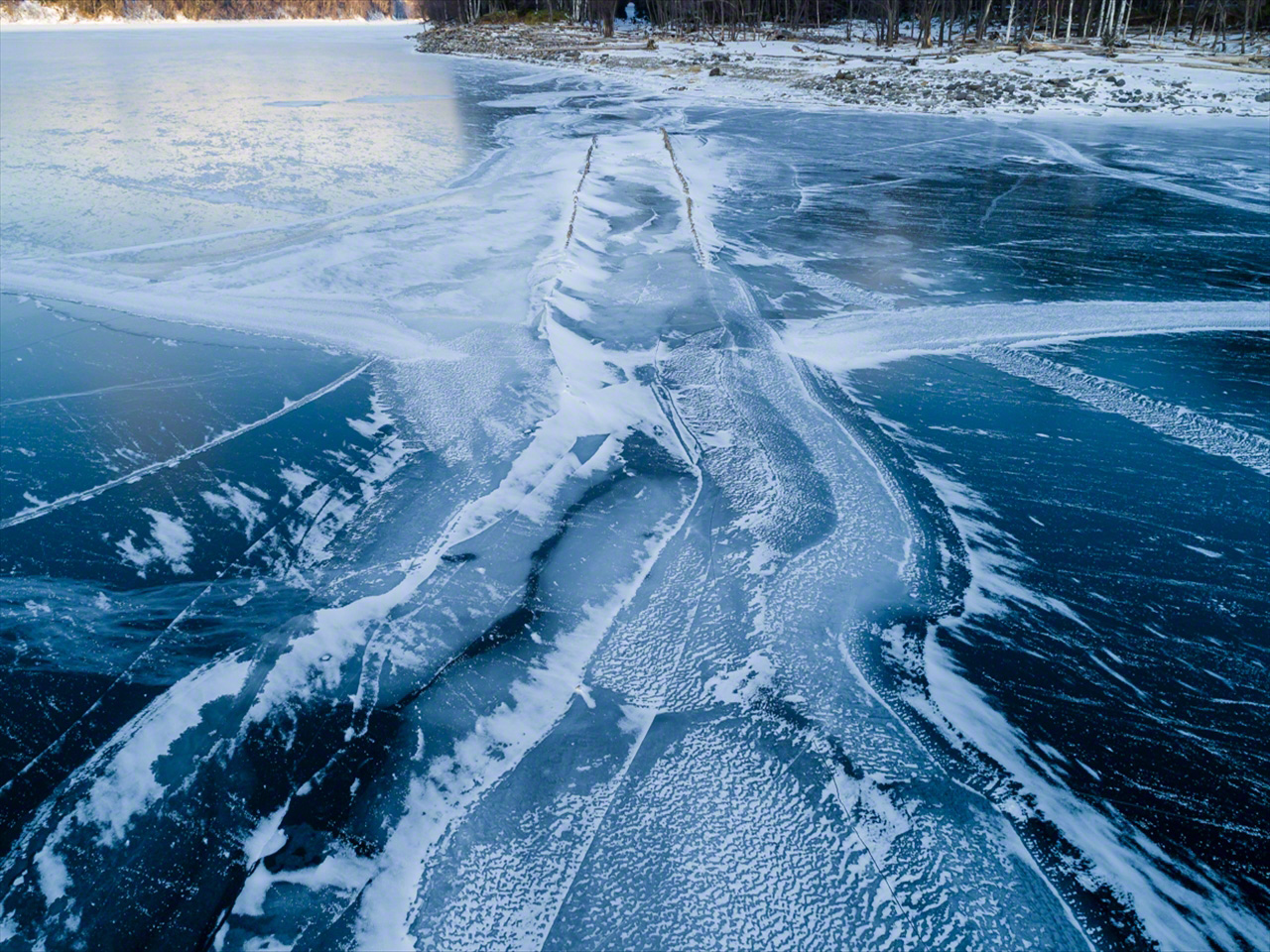 In December, the bridge gradually begins to reappear through the thin ice as water levels drop. 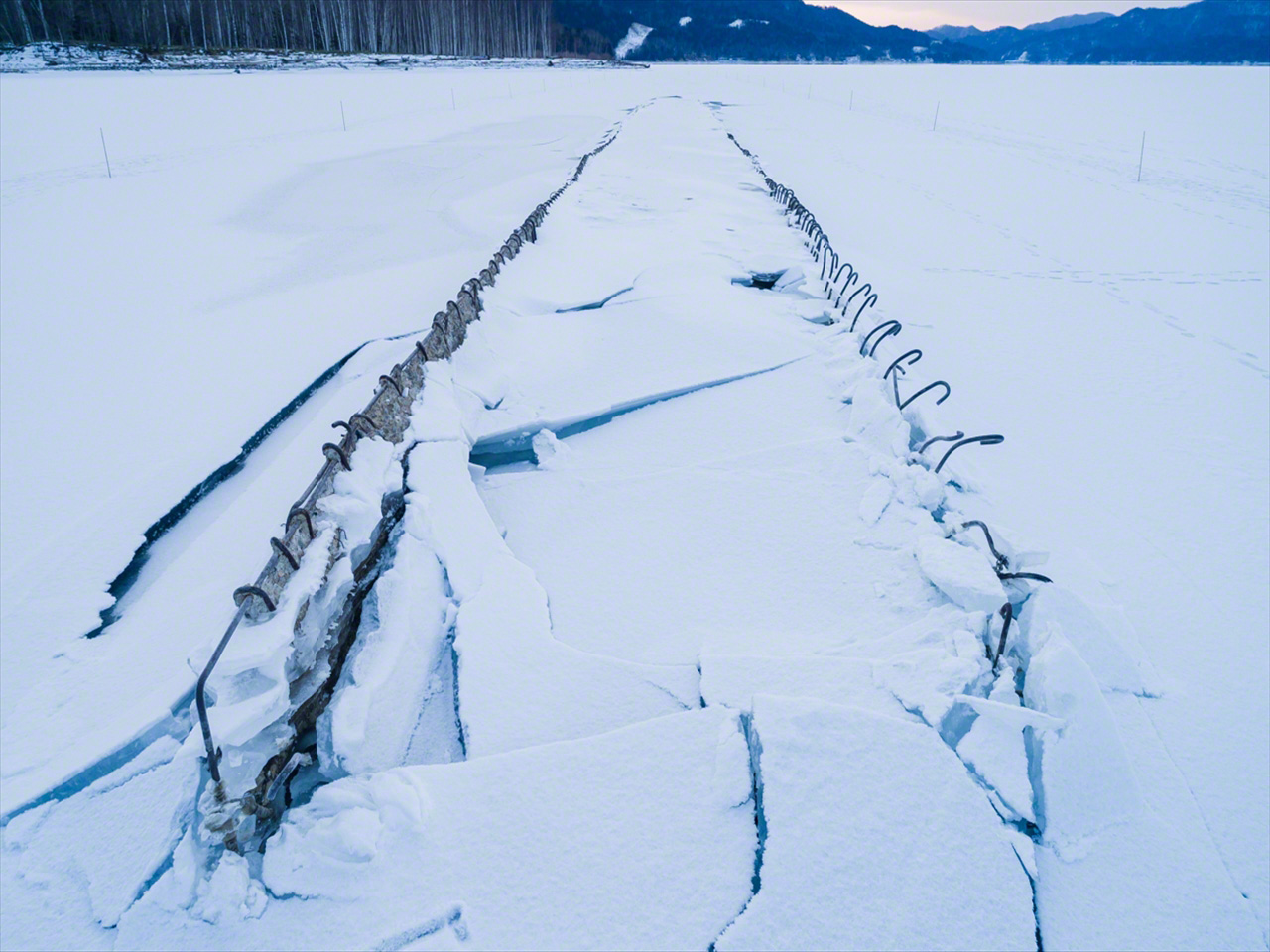 The bridge pushes through the thick December ice.

(Originally published in Japanese. Banner photo: The Taushubetsu Bridge, submerged over the winter, gradually rises from the ice in March. All photos by Iwasaki Ryōji.)

* Getting to the Taushubetsu Bridge

The NPO Higashidaisetsu Nature Guide Center runs tours of the area. Reservations can be made by visiting the website (Japanese only) http://www.guidecentre.jp.