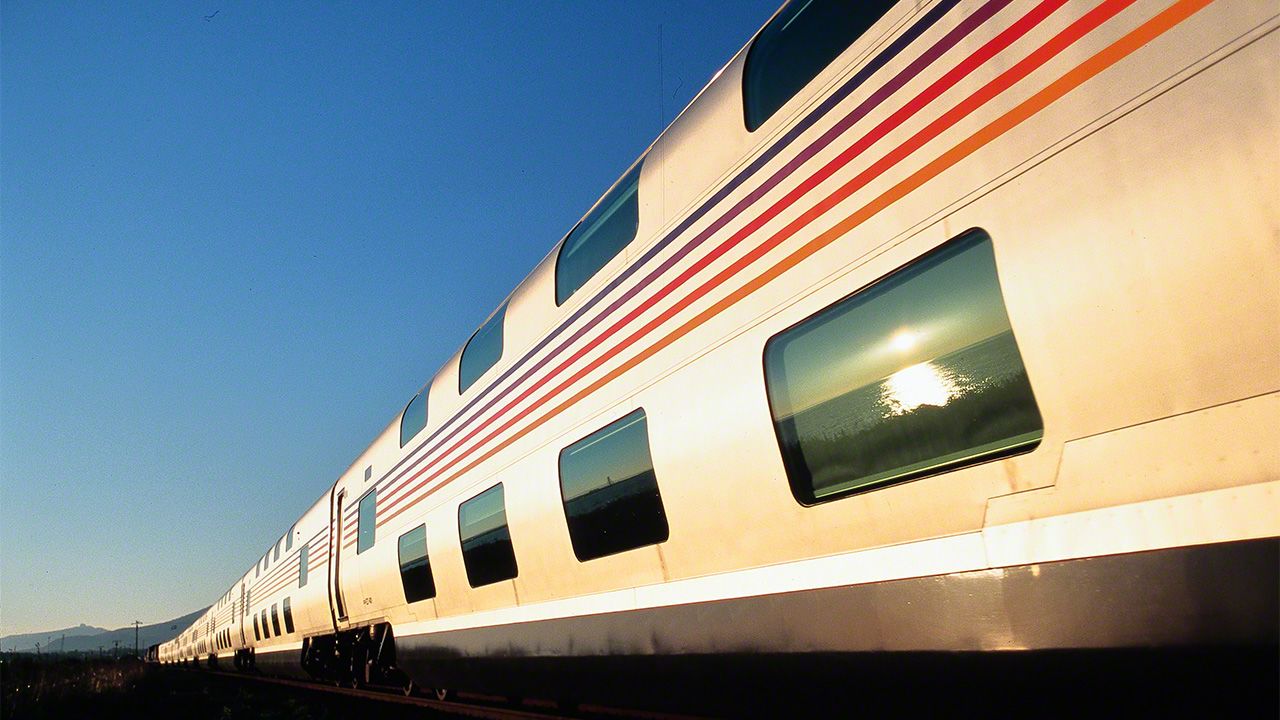 Travel Jul 1, 2021
A photograph of a train hurtling through the countryside has an uncanny way of inspiring feelings of wanderlust. Railway photographer Inoi Takashi carefully chooses his subjects, selecting the best vantage points as well as optimal season and time of day to capture trains in ways that accentuate the beauty of the surrounding nature. He shares his techniques honed over his long career along with some of his most memorable shots.

Traveling around Japan to photograph trains has made me realize just what a beautiful country this is. All around, there are stirring scenes combining nature’s grandeur and the beauty of railways. In addition to the natural splendor of mountains, rivers, and the sea, the landscape contains fine blends of color created by the spectrum of the seasons and local communities. Capturing these at just the right moment is both a challenge and a joy.

The Best Job in the World

Blooming cherry trees on a fine day can combine with the visual effect of a train to create a springlike and refreshing vista. The fascinating beauty of cherry blossoms in rain or fog is also a sight to behold, and the flowers are all the more dreamlike when illuminated by the headlights of a train. While cherries are at their most splendid in full bloom, the “blizzard” created when their petals fall and the raft-like hanaikada created when petals float down a river are also impressive. Photographers can create a variety of spring rail vistas by combining cherry blossoms and trains in different weather, times of the day, and lighting conditions.

As the cherry blossom season is replaced by the new growth of late spring, the budding trees reveal subtle variations in hue. This is indeed a bright and breezy season. When I have my camera pointed at such a peaceful scene waiting for a train to come by, it brings the phrase “commune with nature” to mind. From somewhere far off, I can hear the cry of the Japanese bush warbler heralding the warmer season. These moments are simply bliss.

In autumn, the foliage dazzles with its fine brocade of leaves, and in winter, I wait patiently for a train to trundle across the silvery landscape. As I wait, I imagine the moment when a train bursts into this charming, tranquil, and monotonal world. What kind of rail vista will I be greeted with this time? It is while pondering such questions that I angle my camera, not forcing things but rather casually sensing the breeze of the season.

The Search for New Vistas

Railways link population centers and regional cultures, bringing with them layers of intertwined emotions—unification and separation, happiness and sadness, excitement and sorrow. When the train, the protagonist of the photo, combines with a colorful, seasonal backdrop, it creates the ultimate dramatic moment.

As I look out the window at the changing scenery, allowing myself to be gently rocked by the comfortable rhythm of the train, I find myself strangely at peace. The familiar sound of level crossings and half-forgotten, nostalgic memories hidden at the terminus of an endless railway line come flooding back. The distinct rhythm of the rails and the speed of the train offer a comforting break from the hustle and bustle of daily life.

There remain countless undiscovered natural rail vistas out there to witness. So as not to miss the miraculous moments encountered only when conditions are just right, I intend to keep on taking photographs, facing the scenes I find head on, treasuring every precious moment, and savoring the sensations, sound, and smells of the seasons with all of my five senses. 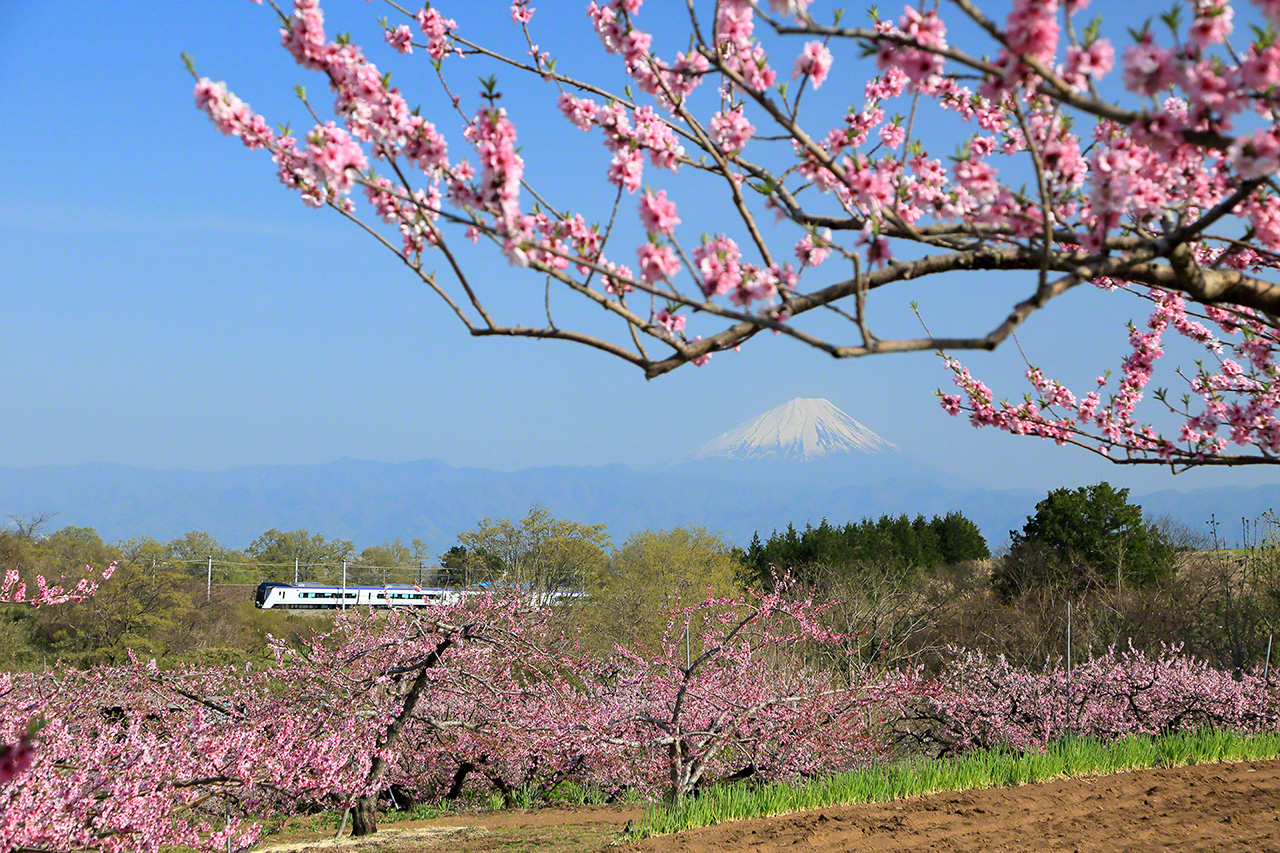 April. An E353 series Azusa on the JR Chūō Main Line between Shinpu and Anayama Stations in Nirasaki, Yamanashi Prefecture. The countryside becomes a sea of pink peach blossoms, on which Mount Fuji and the Yatsugatake and Akaishi Mountains seem to float. In this photo, the train hurtles through this “Shangri-La” with Fuji in the background. 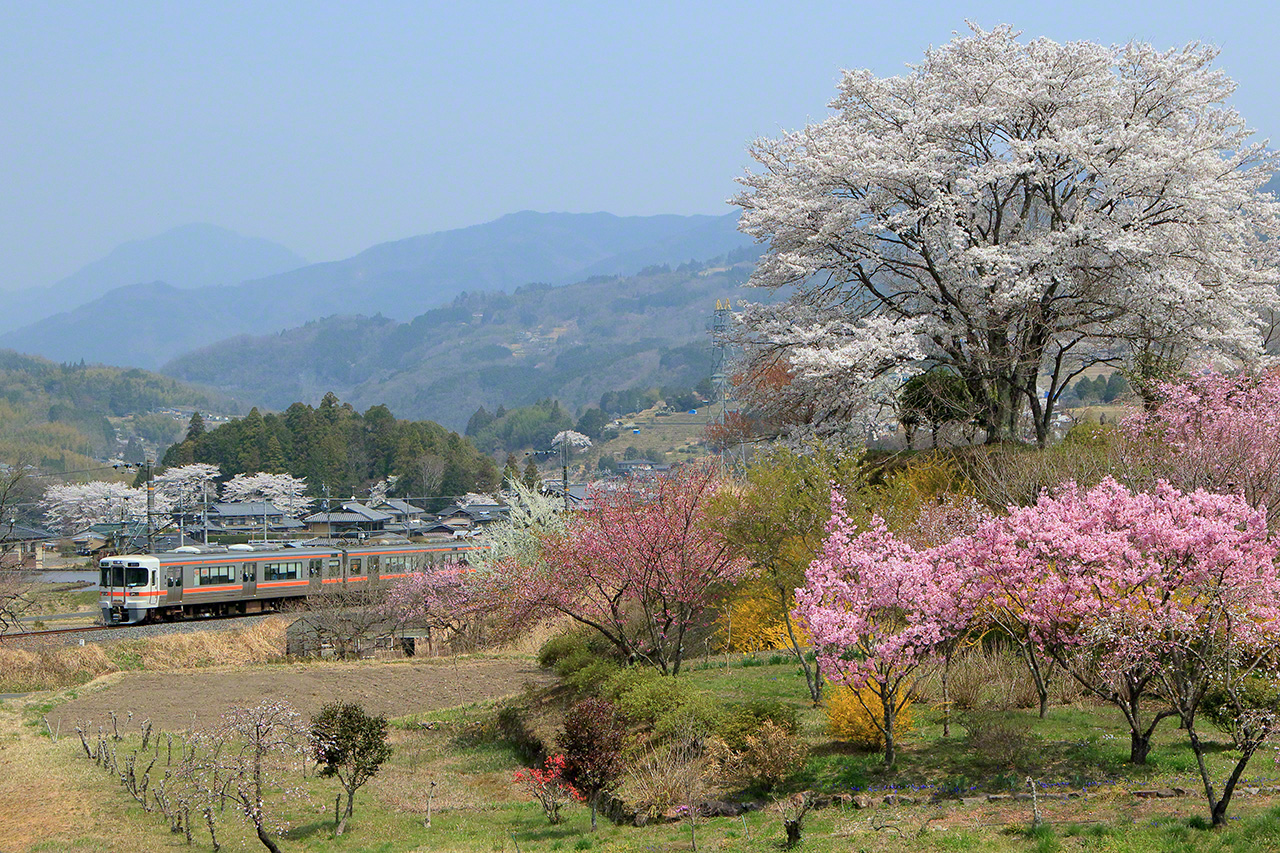 April. A 313 series on the JR Chūō Main Line between Ochiaigawa and Nakatsugawa Stations in Nakatsugawa, Gifu Prefecture. When searching for a spot to shoot from, I drive around thinking about how I should combine the train, the seasonal vista, and the time of day. When I found this towering cherry tree in this unassuming village in the mountains, I was soon met by a train speeding through a spring field. 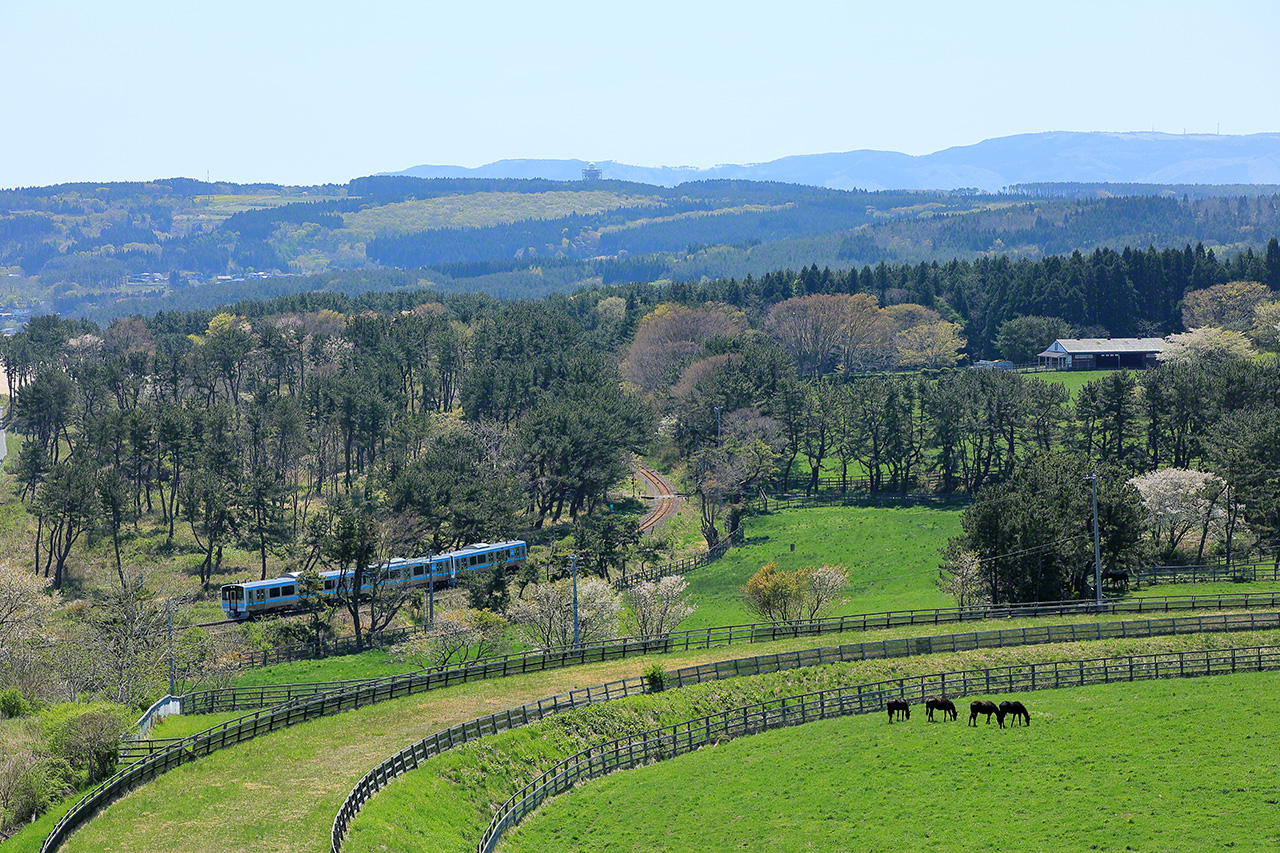 May. An E130 series on the JR Hachinohe Line between Same and Mutsu-Shirahama Stations in Hachinohe, Aomori Prefecture. I shot this from the Samekado Lighthouse, which offers sweeping views of the Pacific Ocean. From April to October, visitors can climb the lighthouse, from where they can enjoy views of trains traversing this pastoral scene. 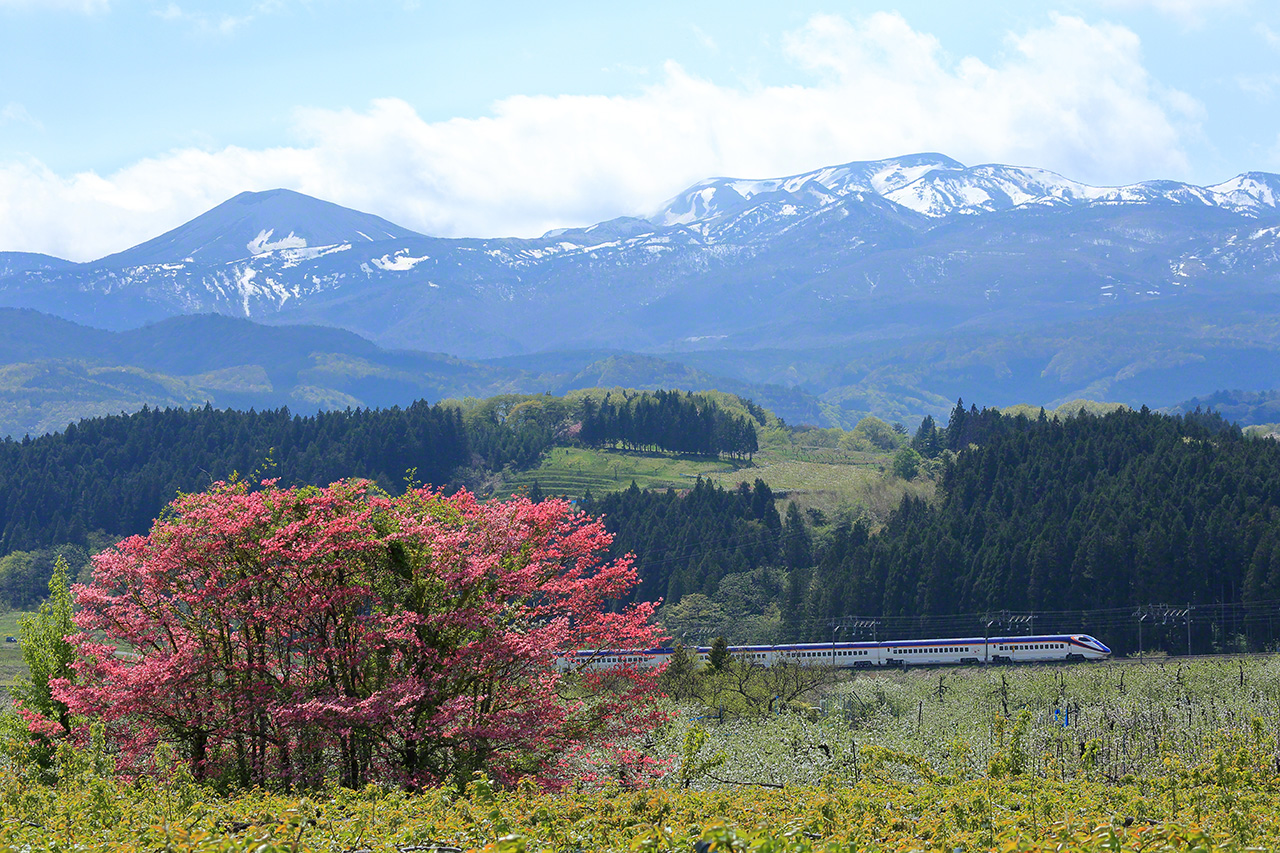 May. An E3 series Tsubasa Shinkansen travelling on the Ōu Main Line between Niwasaka and Akaiwa Stations in Fukushima, Fukushima Prefecture. During this time of year, the track at the foot of the Azuma Mountains is resplendent with peach and nashi (Asian pear) blossoms. After traversing the Itaya Pass, the Tsubasa heads straight to Yamagata. 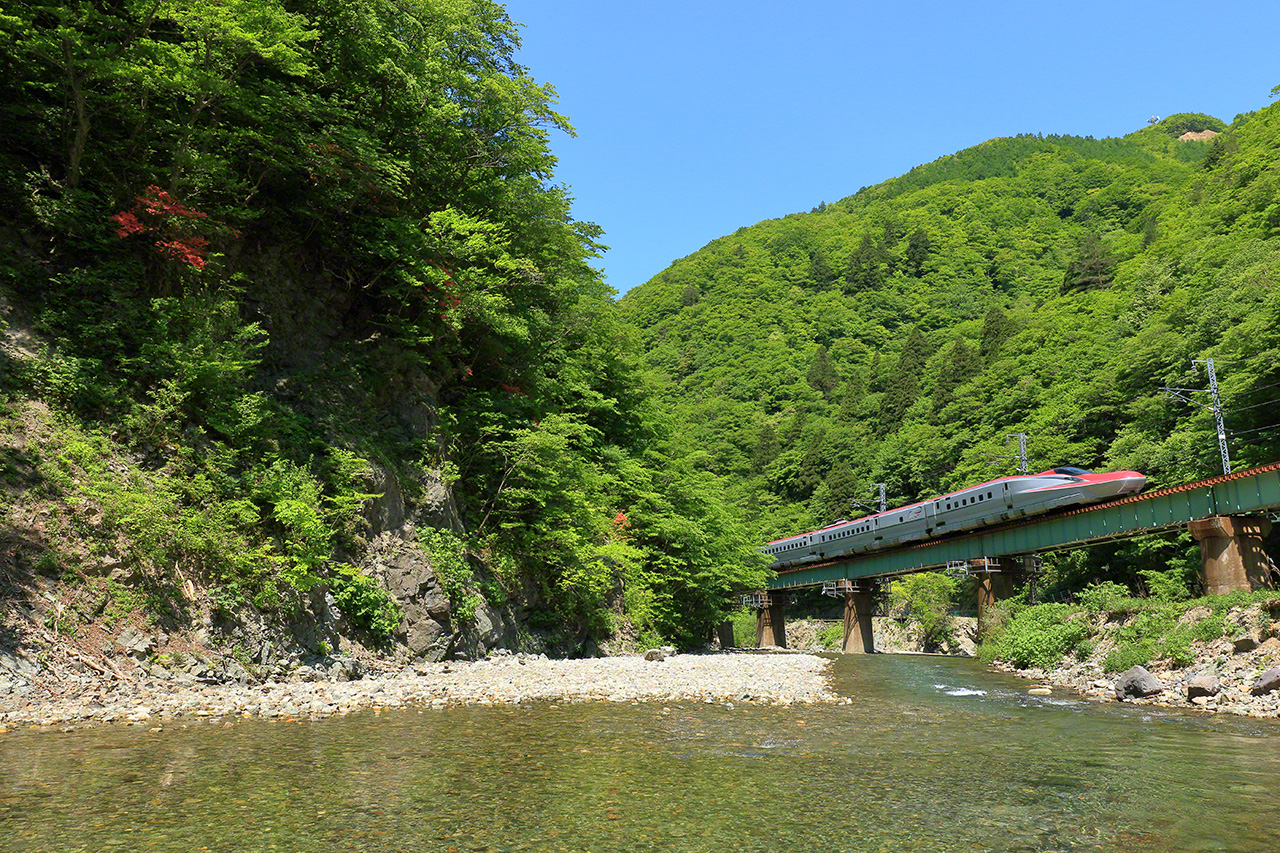 June. An E6 series Komachi Shinkansen travelling on the JR Tazawako Line between Akabuchi Station in Shizukuishi, Iwate Prefecture, and Tazawako Station in Senboku, Akita Prefecture. While the Shinkansen usually joins two population centers at high speed, the Akita and Yamagata Shinkansen lines branch off the main trunk line to travel on the Ōu Main line, which has been upgraded to the 1,435 mm wide-gauge track used by the Shinkansen. The high-speed train travelling through the lush mountains is a sight to behold. 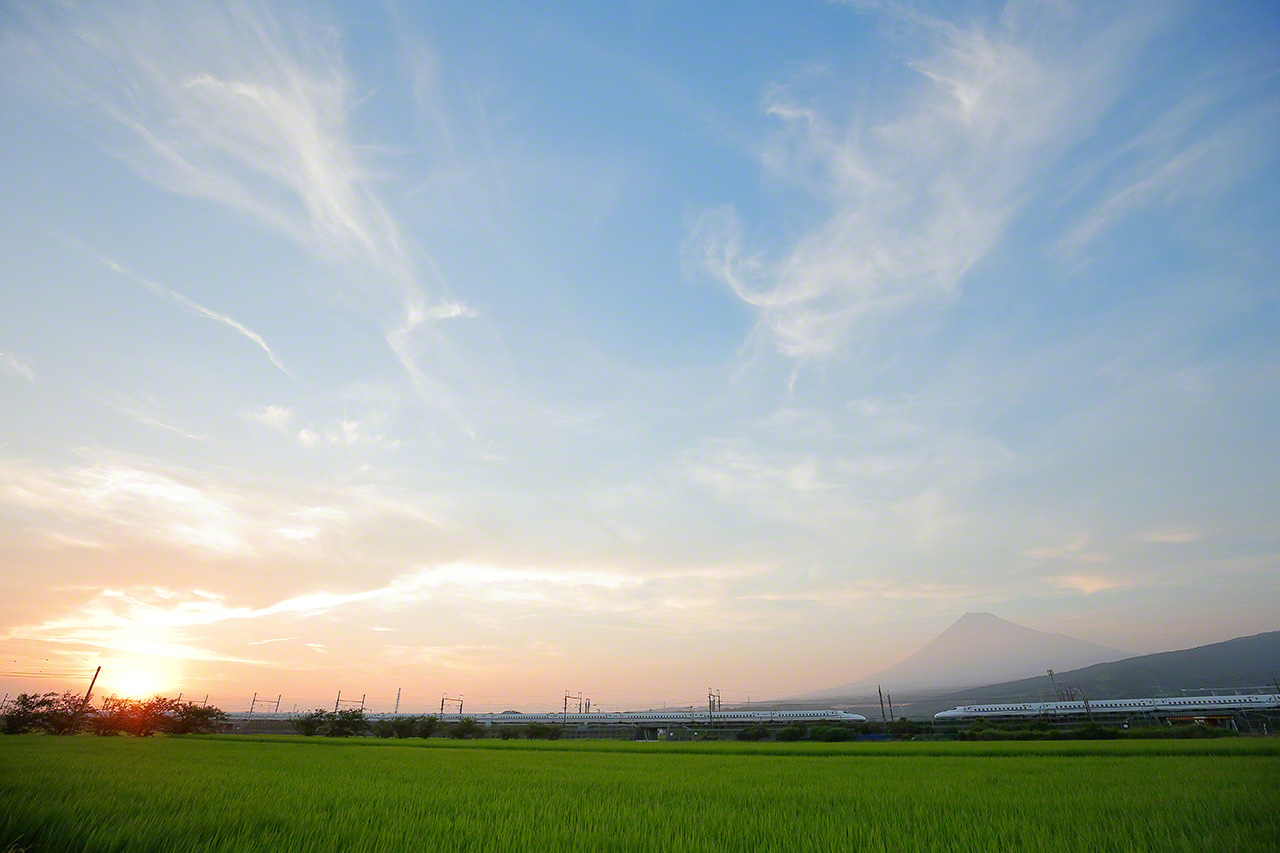 July. An N700A series Nozomi travelling between Mishima and Shin-Fuji Stations on the JR Tōkaidō Main Line. This section of the track has many excellent spots for photographing Mount Fuji and the Shinkansen. In this photo, the northbound and southbound Shinkansens meet at the foot of the mountain, which floats ethereally in the mist, surrounded by the light of a dreamlike sunset. 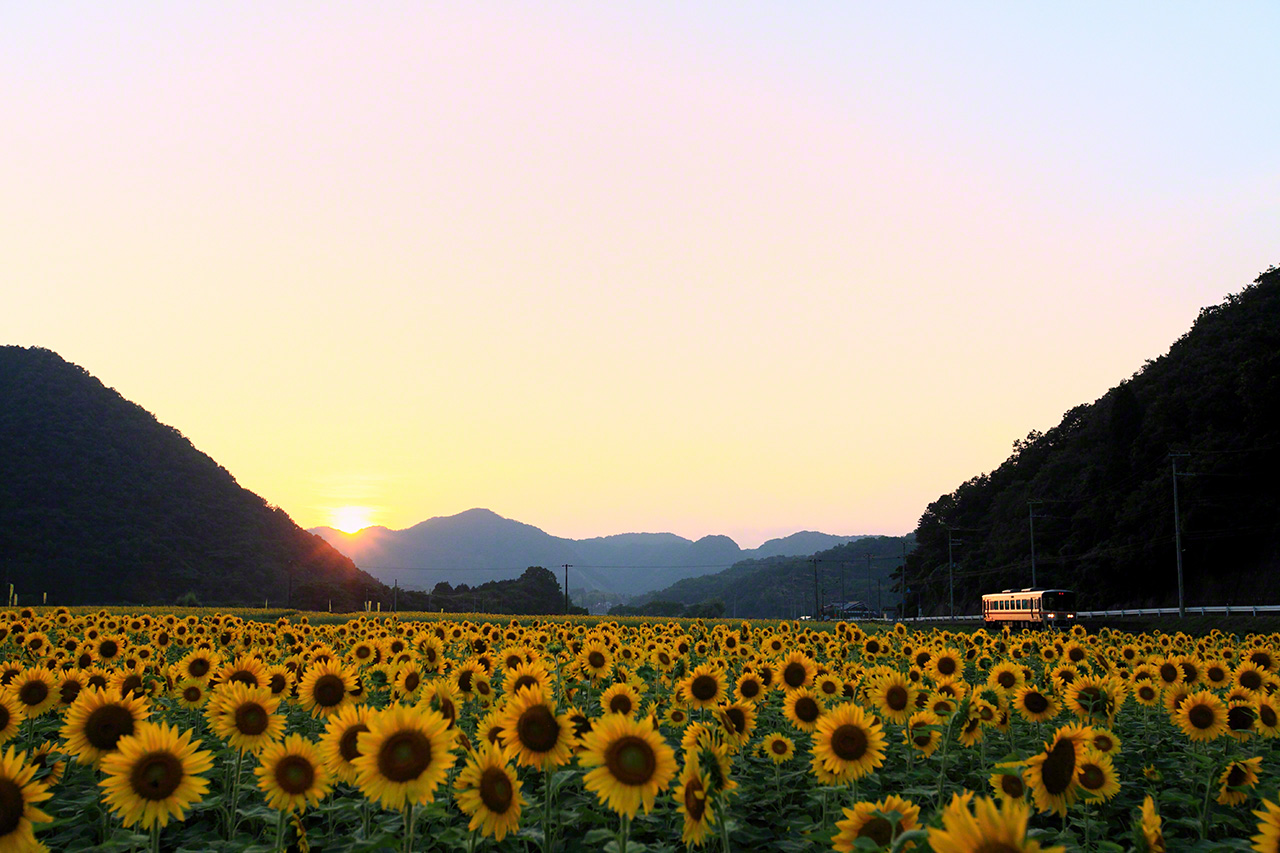 July. A Kiha 127 series diesel train travelling on the JR Kishin Line between Harimatokusa and Mikazuki Stations in Sayō, Hyōgo Prefecture. Sayō is known for its sunflowers, and because of the large number of tourists I had a hard time finding a good spot during the day. I decided to visit in the mornings and evenings when there are fewer people around. This train appeared just as the sun was about to set. 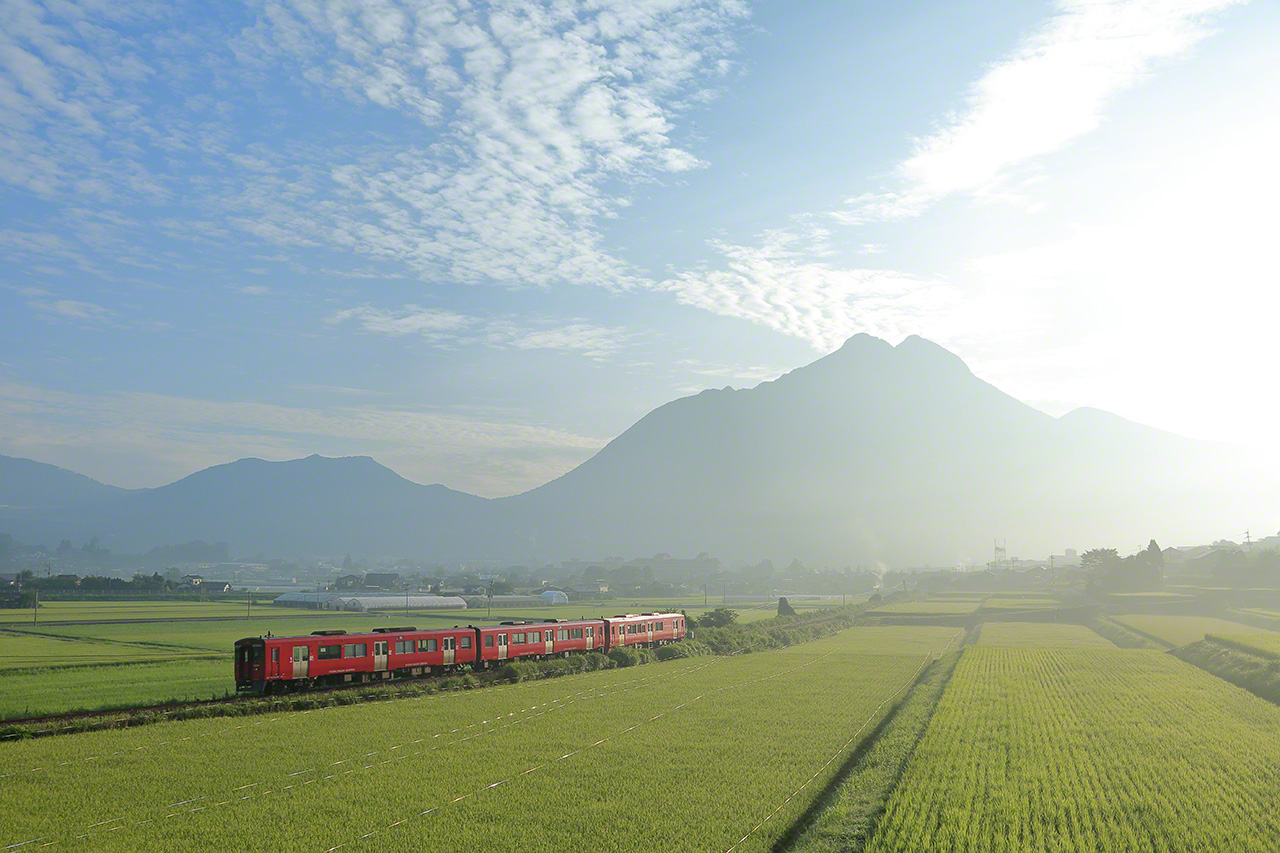 August. A Kiha 200 series diesel train on the JR Kyūdai Main Line between Yufuin and Minamiyufu Stations in Yufuin, Ōita Prefecture. Many Japanese trains are electric, whereas diesel locomotives chug along under their own power, and it was nice to be able to take a photograph free of overhead lines. The red locomotive races cheerfully past Yufuin’s landmark Mount Yufu in the morning mist. 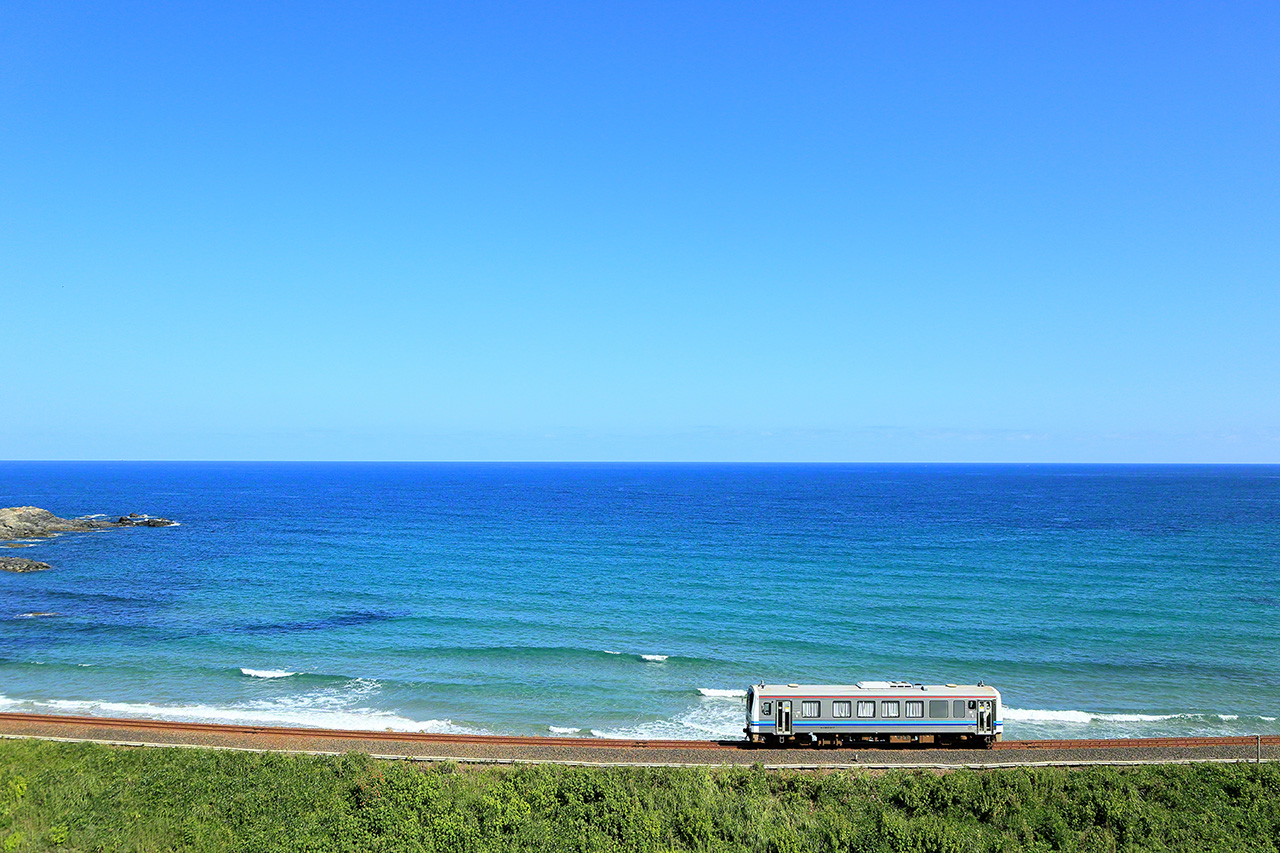 August. A Kiha 120 series on the JR San’in Main Line between Orii and Mihomisumi Stations in Hamada, Shimane Prefecture. There is something cool and refreshing about the way the train trundles along the shore of the Sea of Japan, with its distinctive bright blue hue, under the clear azure sky. It is as if the tracks are floating on the water. 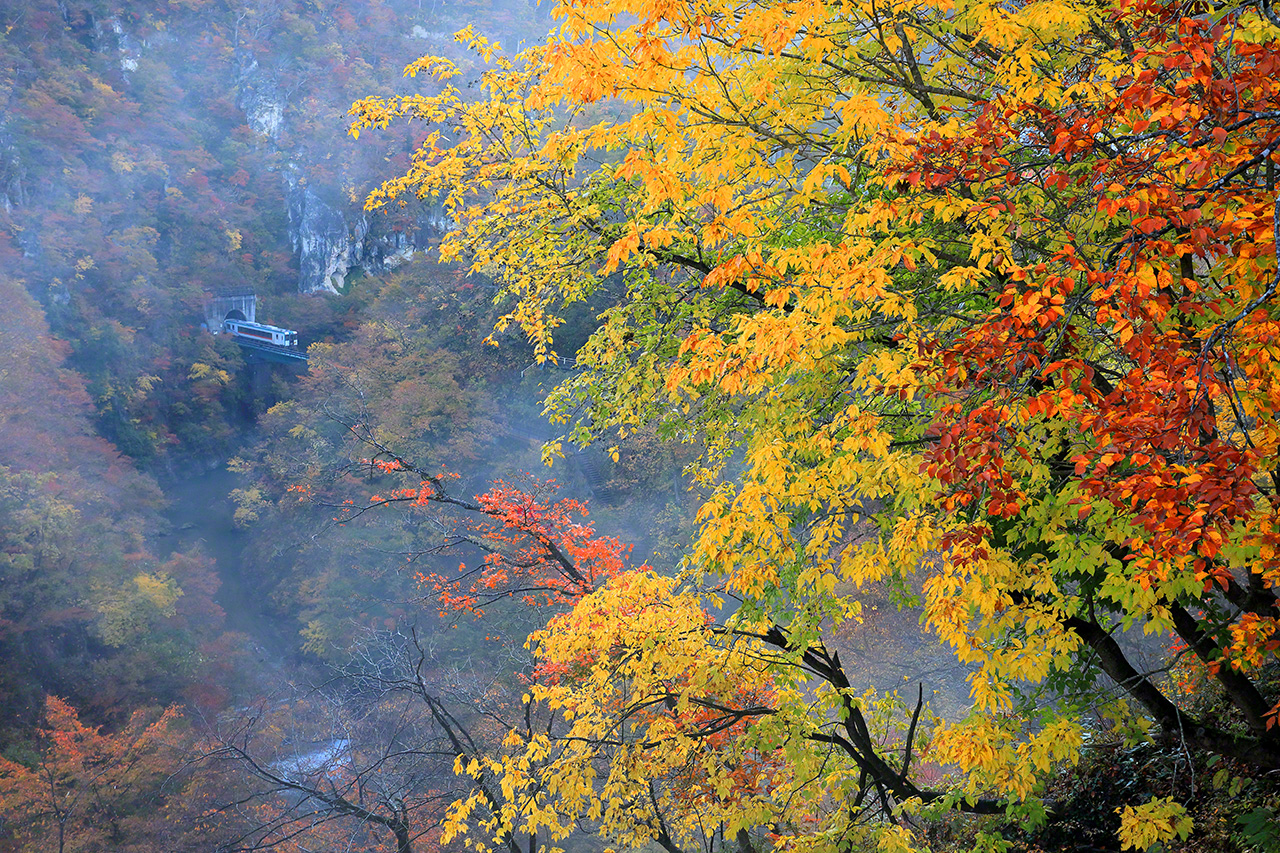 October. A Kiha 110 series on the JR Rikutō Line between Naruko-Onsen and Nakayamadaira-Onsen Stations in Ōsaki, Miyagi Prefecture. Naruko Gorge is one of the Tōhoku region’s best spots for viewing autumn leaves. You cannot help letting out a gasp when the train appears in the valley, lined as it is with a brilliant autumn brocade. This, combined with the mist, makes this photo look like something out of a dream. 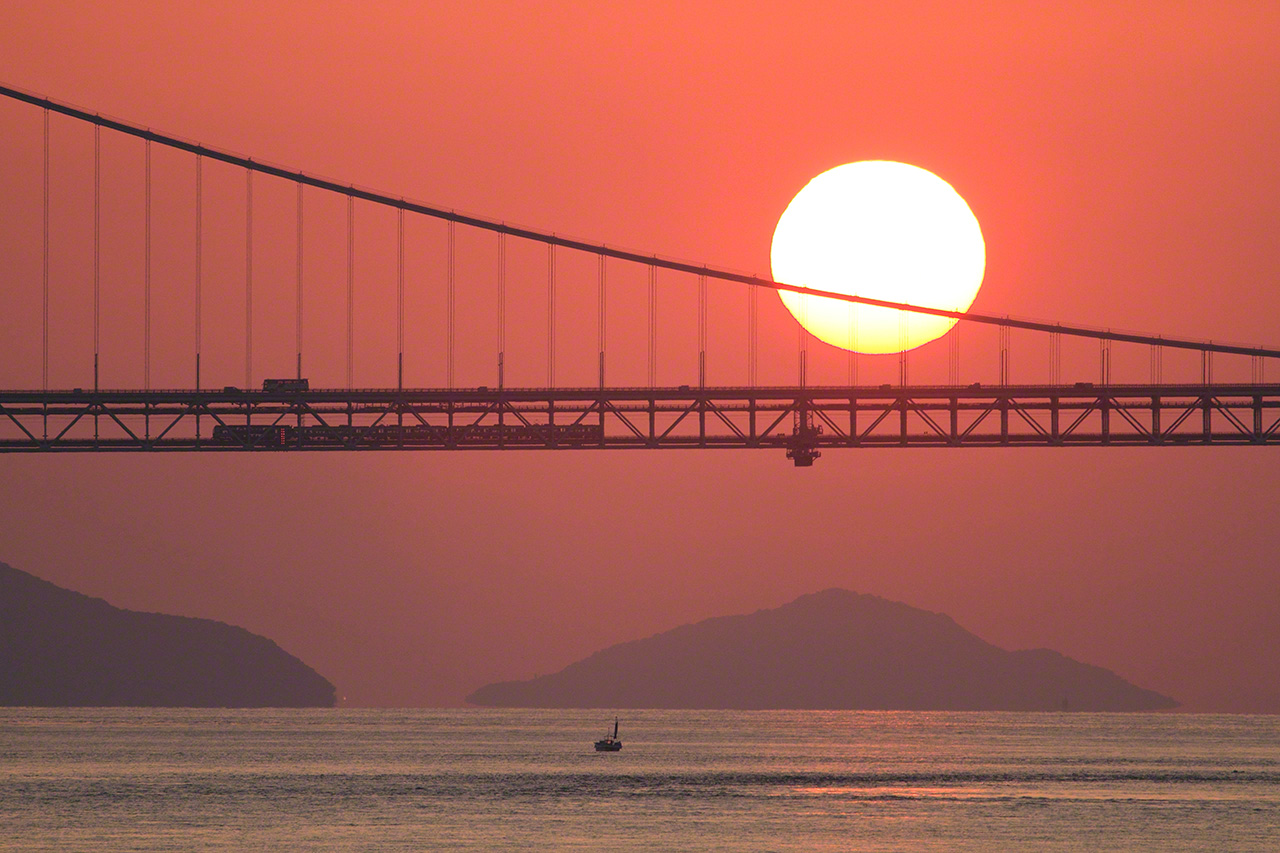 October. The 5000 series Marine Liner on the JR Seto Ōhashi Line between Kojima Station in Kurashiki, Okayama Prefecture, and Sakaide Station in Sakaide, Kagawa Prefecture. Since the Seto Ōhashi bridge opened in 1988, this partnership between train and setting sun has attracted many rail fans. This photo, which shows the silhouette of the train travelling on the bridge’s lower deck toward the setting sun, was taken from the Shikoku side. 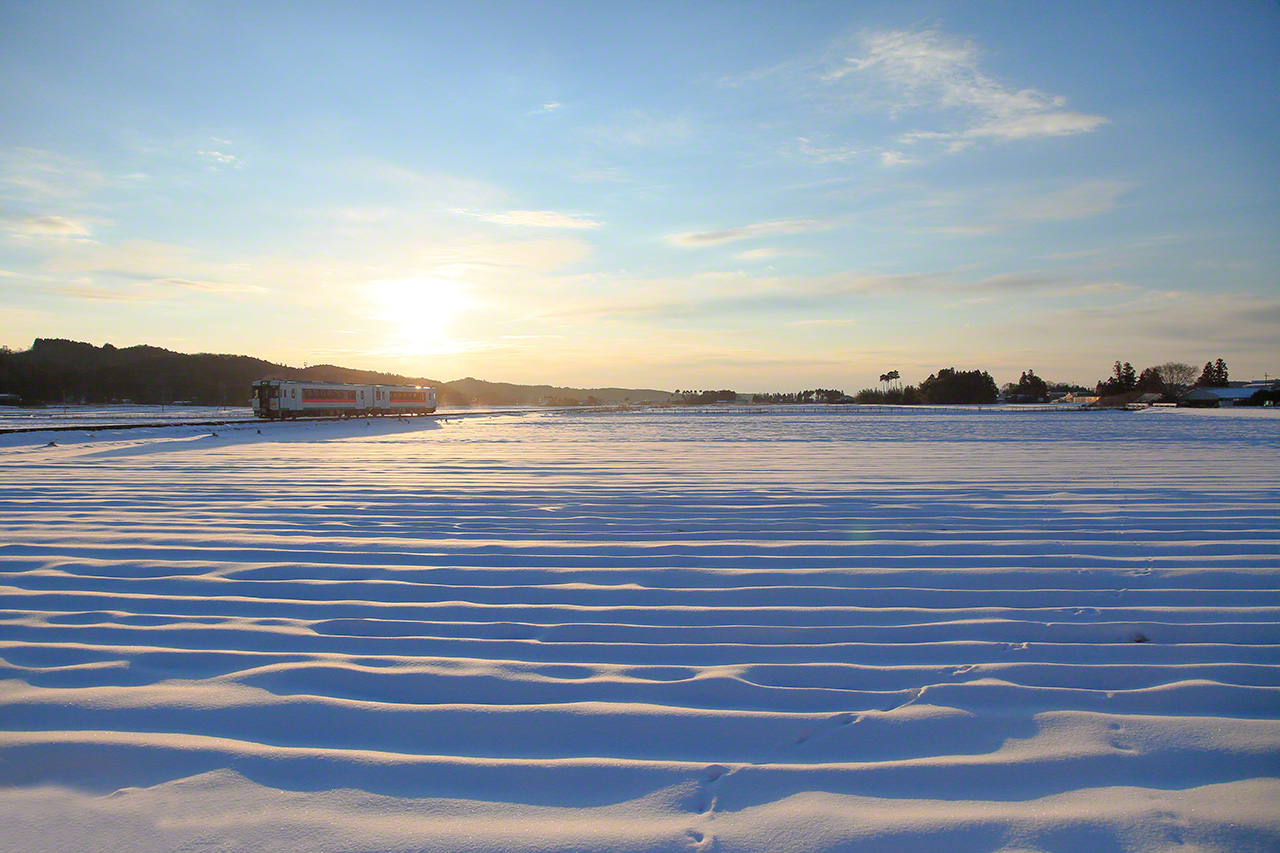 January. The Kiha 110 series diesel on the JR Rikuutō Line between Kaminome and Ikezuki Stations in Ōsaki, Miyagi Prefecture. There is something magical about the time just after sunrise. I had to sleep in my car in order to catch a glimpse of the train travelling through the gray of the morning, which it did as I was sipping my morning coffee. 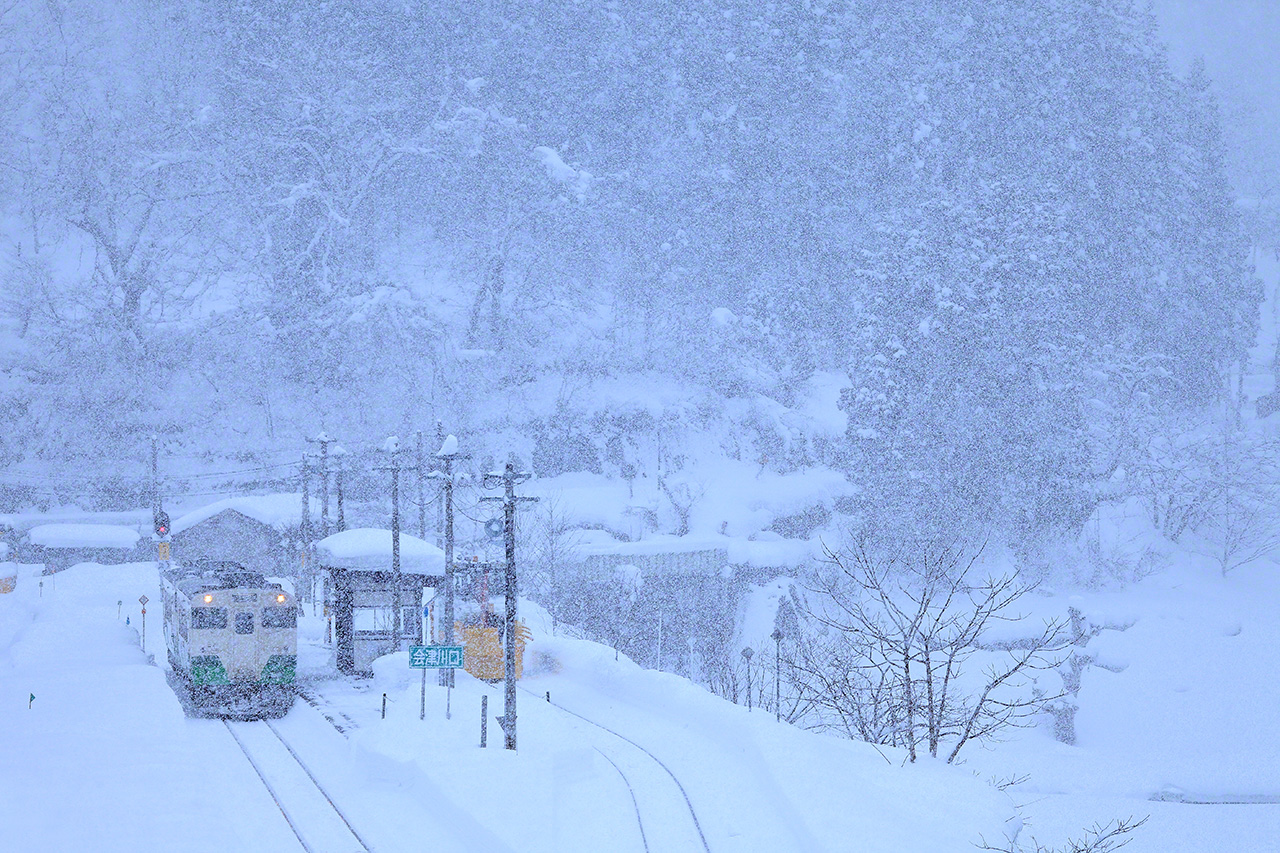 January. The Kiha 40 series diesel on the JR Tadami Line stopped at Aizukawaguchi Station in Kaneyama, Fukushima Prefecture. This area receives some of the heaviest snowfalls in the country. In 2011, torrential rain in Niigata and Fukushima knocked out the line between Aizukawaguchi and Tadami Stations, and it is likely to be some time before the service is fully restored. Currently, the Kiha E120 series diesel train serves this route. 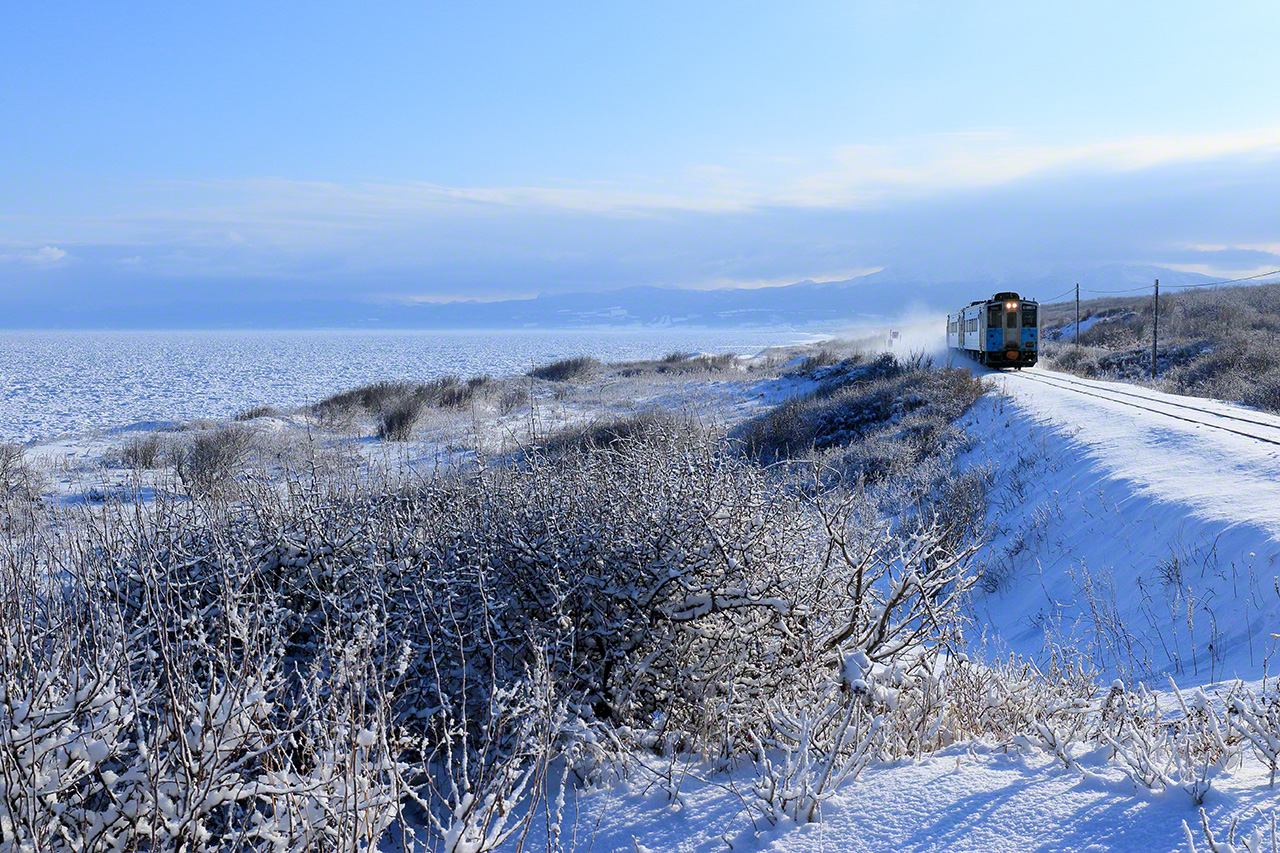 February. The Kiha 54 series diesel on the JR Kushiro Main Line between Yanbetsu and Shiretokoshari Stations in Shari, Hokkaidō. I travelled to get this shot after verifying that the drift ice on the sea of Okhotsk had reached the shore. One cannot tell where the drift ice ends and the snow-covered land begins. 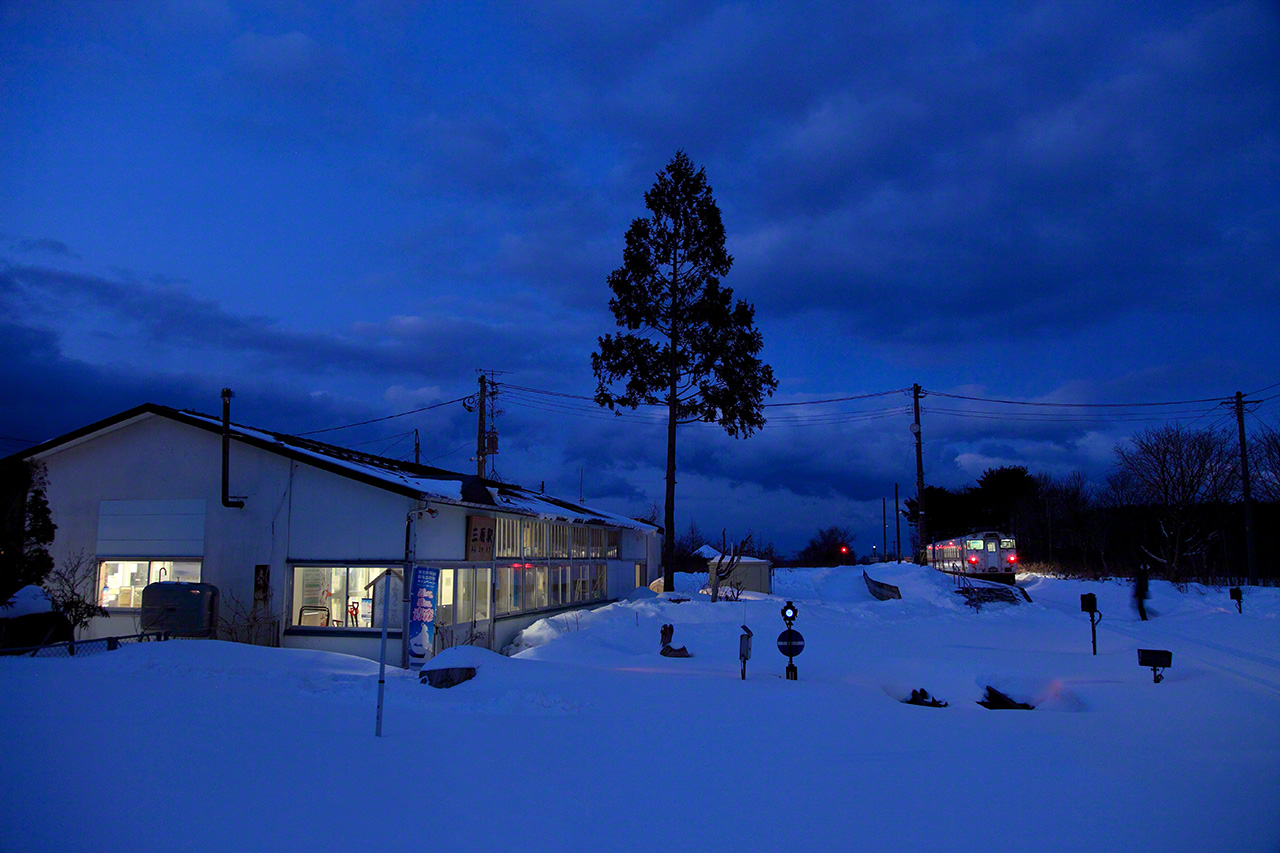 February. The Kiha 40 series diesel on the JR Tsugaru Line stopped at Minmaya Station in Sotogahama, Aomori Prefecture. Minmaya is the northernmost terminus in JR East’s network. So that my footprints would not be in the photo, I walked the long way around to my vantage point. Currently, a new GV-E400 series train operates on this line. 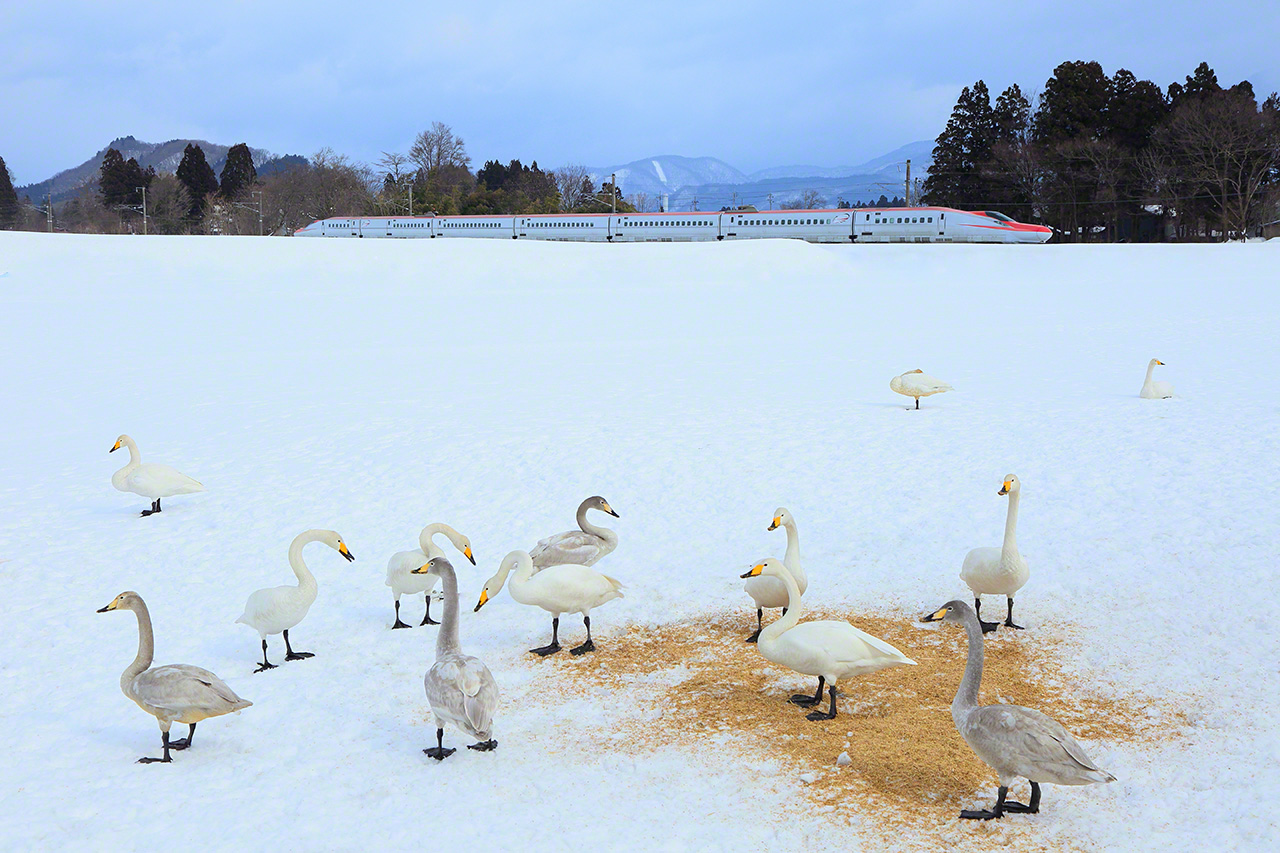 February. The E6 series Akita Shinkansen Komachi on the JR Tazawako Line between Kakunodate and Uguisuno Stations in Senboku, Akita Prefecture. I drove up this farm road hoping to get a shot of the Komachi travelling through the snow, only to be greeted by this party of swans, which were delighting local families. While taking this photo, I was informed that a neighboring farmer feeds the birds. 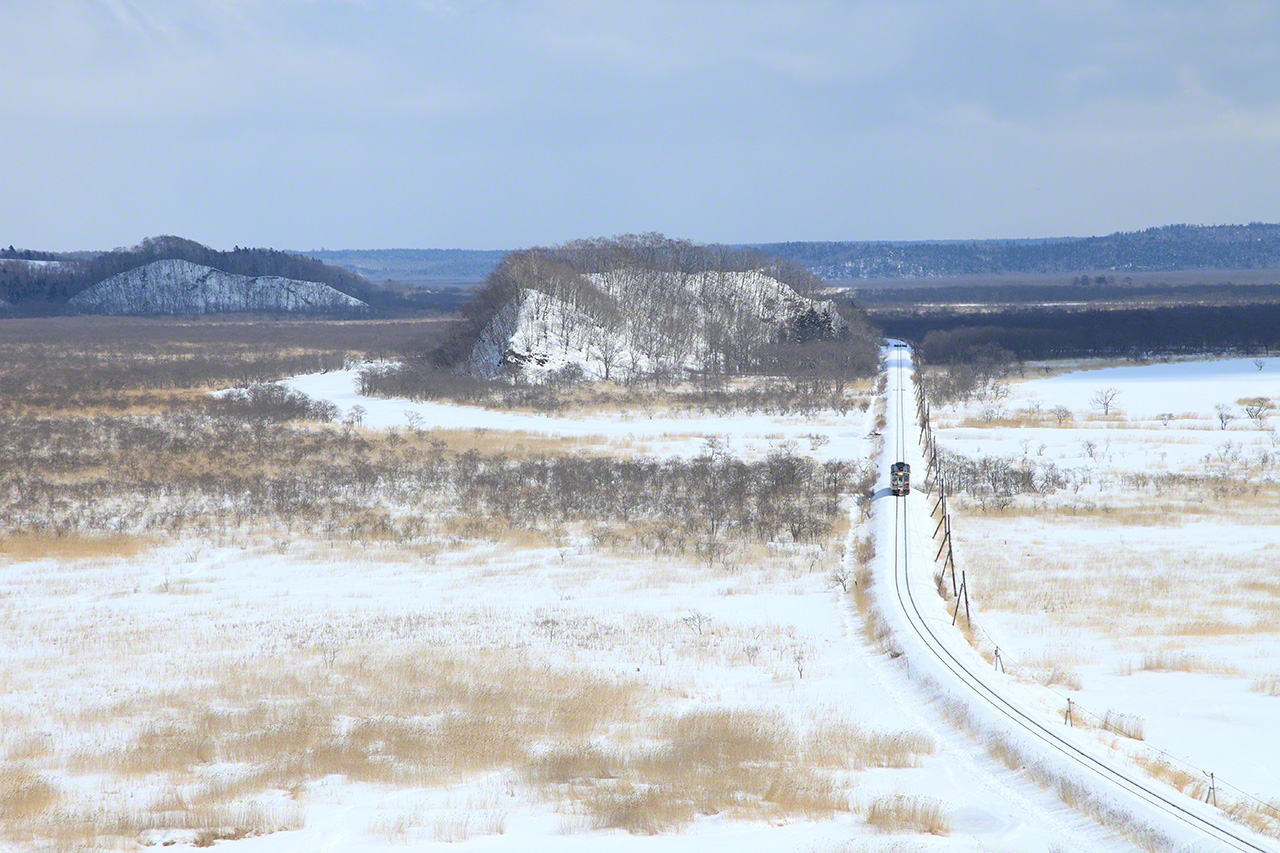 March. The Kiha 54 series diesel on the JR Nemuro Main Line between Akkeshi and Itoizawa Stations in Akkeshi, Hokkaidō. In Hokkaidō, I find myself using a lens 50% longer than what I would use in Honshū. As I was contemplating the vastness of terrain, a train came along, cutting the Bekanbeushi marshlands in two.

(Originally published in Japanese. Text and photographs by Inoi Takashi. Banner photo: The luxury Cassiopeia sleeper on the JR Muroran Main Line between Datemonbetsu and Kitafunaoka Stations in Date, Hokkaidō, in September. The Cassiopeia began serving the Ueno to Sapporo route in 1999, but was replaced with an E5 Shinkansen when the Hokkaidō Shinkansen began operation in 2016.)