Culture Jun 1, 2012
The famous “floating shrine” of Itsukushima is a complex of brightly colored pavilions built by the powerful warrior and courtier Taira no Kiyomori more than eight centuries ago. It is the face of Miyajima, traditionally regarded as one of the three most beautiful spots in Japan, and is registered as a UNESCO World Heritage site. This time-lapse video captures the fantastic beauty of the shrine as it changes expression with the ebb and flow of the tide.

Gateway to a Sacred Island

[About time-lapse videos]
Time-lapse photography is a technique whereby still images taken at regular intervals over an extended period are sequentially played back as frames of a video. The standard video has 30 frames per second, so if the camera is set to capture an image every 20 seconds, one hour’s worth of images will result in 6 seconds of video. Time-lapse videos are ideal for depicting slow changes. We decided to use the technique to film the beauty of Itsukushima Shrine as its expression changes with the ebb and flow of the tide.

Itsukushima is the official name of the small island of Miyajima (“Shrine Island”) in Hiroshima Prefecture, traditionally regarded as one of the three most scenic spots in Japan. Around 30 kilometers in circumference, the island looks across the Inland Sea to Japan’s main island of Honshū, which is only 500 meters away at the closest point. Its name is said to come from the word itsuku, meaning “to cleanse the body and soul to serve the gods.” Shima means “island.” The whole of Itsukushima, overlooked by the 535-meter peak of Misen, has been regarded as a sacred site since ancient times.

According to legend, Itsukushima Shrine dates back to the year 593. It is dedicated to three female tutelary deities of maritime safety—Ichikishimahime no Mikoto, Tagoribime no Mikoto, and Tagitsuhime no Mikoto—who are collectively known as Itsukushima no Ōkami (the “Great Gods of Itsukushima”). Until the Heian period (794–1185) Itsukushima Shrine was of merely regional importance, as a center of faith and the primary shrine of Aki Province. What propelled it to national prominence was the devotion of the ruler Taira no Kiyomori (1118–81), one of the most powerful figures of the age.

Taira no Kiyomori was the leader of the Ise branch of the Taira family (also known as the Heishi, or Heike), a powerful warrior house that traced its descent to Emperor Kanmu. Kiyomori rose to the apex of military power following Taira victories over their great rivals the Minamoto (or Genji) in the Hōgen and Heiji Disturbances in 1156 and 1159. He is the central figure in the Heike monogatari (Tale of the Heike), Japan’s great military epic, which narrates the story of the rise and fall of Kiyomori and his clan.

By supporting the influential figure of the “retired” (cloistered) emperor Go-Shirakawa, Kiyomori climbed to the position of daijō daijin (grand minister of state) at the age of 50. Under his leadership, the Taira clan reached the peak of its power and prestige. The position of the clan at the apex of Heian society seemed secure when Kiyomori succeeded in having his grandson installed as the Emperor Antoku. Although the Tale of the Heike depicts Kiyomori as an arrogant, brutish dictatorial figure, his reputation has undergone revision in recent years, and many scholars now recognize him as the first to establish a warrior government with sufficient clout to rival the Imperial court. 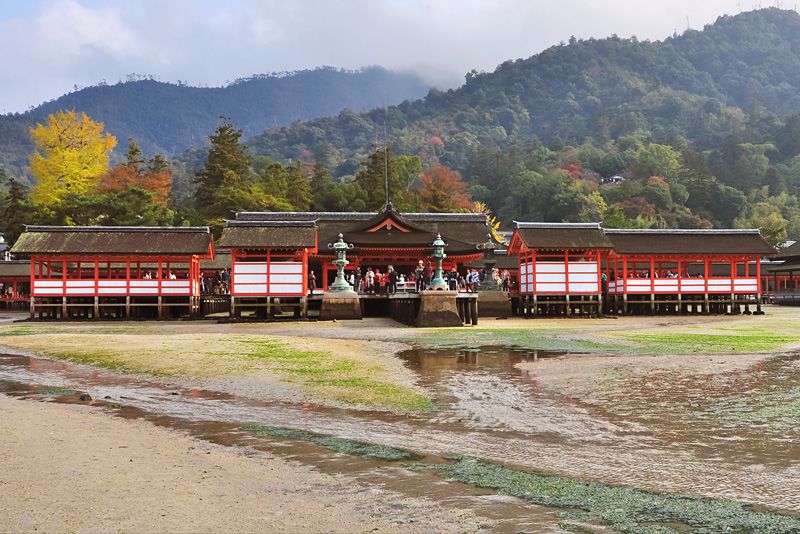 Just as the priest had predicted, Kiyomori not only became the most powerful samurai in Japan but also reached the apex of the court nobility. As a mark of his gratitude to the deities of Itsukushima Shrine, he had its buildings fully renovated. The result was the shrine as we know it today, with the main building and numerous other structures seeming to float on the water. The major restoration took place around 1168, before Kiyomori had reached the height of his glory.

Little is known about what the shrine looked like before Kiyomori's renovation. There are several contending theories. Some people believe that the shrine was originally built over the water because of a taboo against building on sacred ground. Others contend that the shrine was originally built on land, until an artificial inlet was dug at Kiyomori’s suggestion to give the shrine its present appearance. What is beyond any doubt is that Kiyomori was the first and only person ever to use such a stunning setting for a shrine based on the shinden-zukuri style used in Heian-period mansions.

The shrine buildings burned down several times, and the main structures today date from the Kamakura (1185–1333), Muromachi (1333–1568), and Edo (1603–1868) periods. Nonetheless, the overall appearance remains largely unchanged since the days of Kiyomori. The Ōtorii (Great Gate), the shrine’s most iconic structure, is the eighth incarnation, and was built in the Meiji period (1868–1912). 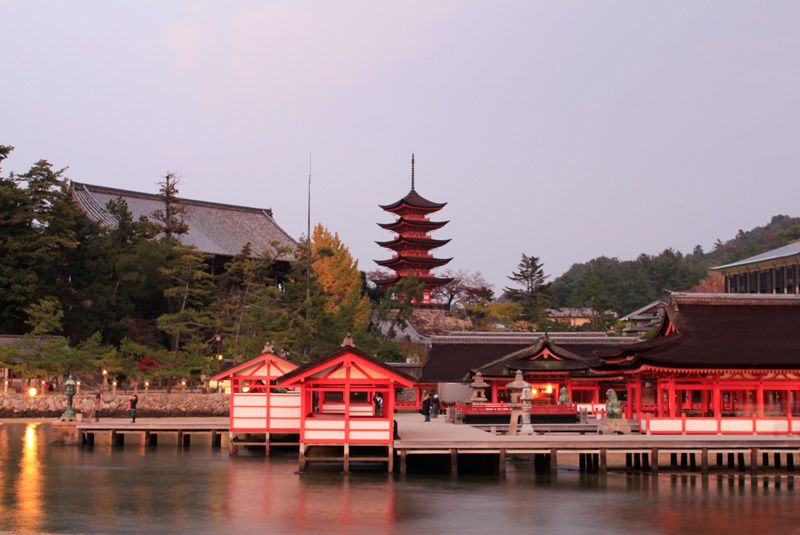 The buildings of Itsukushima Shrine stand in an inlet called the Tama no Miike. At roughly the center of the inlet are four pavilions that together make up the Honsha, or Main Shrine. To the left of the Main Shrine as seen from the sea is the auxiliary Marōdo Shrine, likewise composed of four buildings. The Marōdo Shrine is the first part of the complex that visitors reach as they walk down the covered walkway from the entrance. Traditionally, people have offered their prayers here before moving on to the main shrine.

The shrine’s design inevitably requires a corridor over which visitors can approach from land. At low tide the water recedes beyond the Great Gate, 150 meters offshore from the shrine buildings. At high tide, the water rises to just below the floor of the corridor. At high tide on a fine day, the whole shrine shimmers like an underwater palace as the sunlight glints off the water and plays across the vermillion pillars and beams. It is no wonder that aristocrats of the Heian period likened the shrine to Ryūgū, the mythical dragon palace under the sea.

Kiyomori’s taste shines through in the winding, labyrinthine style of the corridor that lends variety to the viewer’s perspective. The corridor has historically been used for many other purposes besides as a simple walkway. In a practice known as sensō kuyō, a thousand Buddhist monks sat along the corridor, chanting sutras for the repose of the dead. The corridor has also been used as a stage on which musicians sat and played court music, and at other times as a place for audiences to sit and enjoy performances of court music, dance, or Noh drama. The floorboards of the corridor are set slightly apart, allowing water to overflow from between the boards at exceptionally high tides, releasing the upward pressure of the water and keeping the structures from being swept away from their moorings. 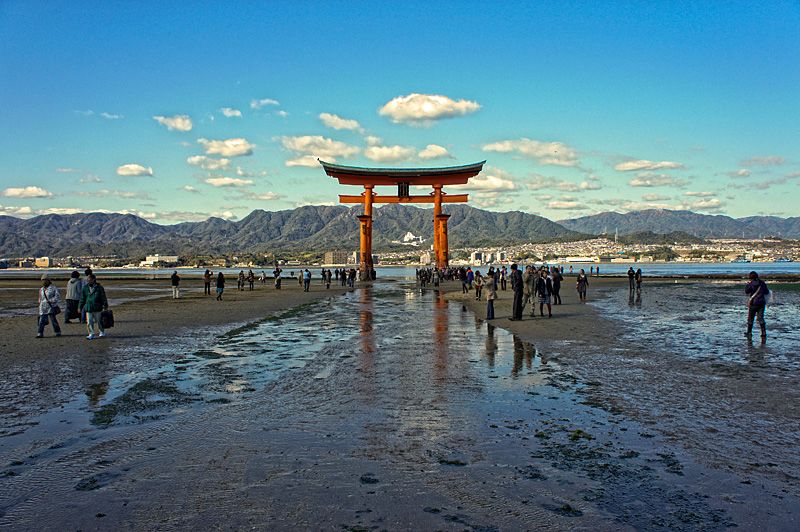 The Main Hall is the largest of its kind in Japan. The Main Hall and Offertory Hall were rebuilt by the warlord Mōri Motonari (1497–1571). Within the Main Hall are six miniature shrines, called gyokuden, encasing sacred objects as repositories of the deities.

The Main Hall has been inundated above floor level many times when a typhoon coincided with the spring tide. But the six gyokuden, which are placed on a platform 1.5 meters above the corridor floor, have never been flooded.

The Haraiden (Purification Hall) and Haiden (Worship Hall) in front of the Main Hall and Offertory Hall are some 330 years older than the Main Hall, and date back to the Kamakura period.

An Enduring Symbol of a Perished Clan

Across the strait on the mainland is another shrine with a close connection to Kiyomori’s extensive island shrine complex. Jigozen Shrine is the outer shrine of Itsukushima Shrine. Today only the worship hall and main hall remain. In Kiyomori’s day the Head Shrine at Itsukushima comprised 37 buildings and 4 torii gates, with another 19 buildings and 1 torii on the mainland outer shrine. Between them, the two shrines made up a magnificent complex of 56 buildings. 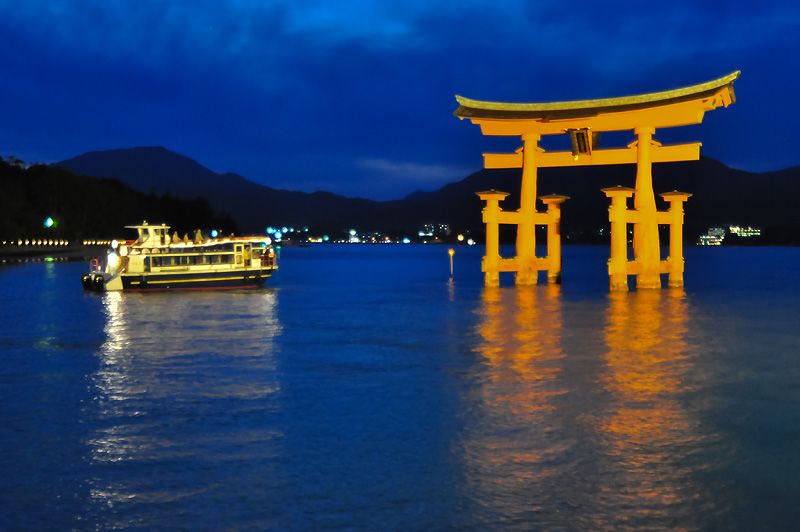 Why did Kiyomori build Itsukushima Shrine on such a grand scale? One possible reason is that he wanted the shrine complex to symbolize the power of the Taira clan. The other major families at court already each had their own tutelary deity and shrine. The Fujiwara had the Kasuga Taisha, and the Minamoto clan regarded Hachimangū as their own family shrine. Kiyomori perhaps wanted to make Itsukushima Shrine into the tutelary shrine of the Taira. Its splendor and grandeur was meant to represent the power and majesty of his clan.

Another purpose was almost certainly to harness the power of the gods to improve the safety of maritime traffic in the Seto Inland Sea. Kiyomori completed his father’s work of ridding the Seto Inland Sea of pirates and gained command of the sea. Maritime safety in the area meant that trading vessels from Song China could pass through the Inland Sea from their stopover point in Hakata and sail straight to Fukuhara (present-day Kobe), the base of Kiyomori’s power. Security in the Seto Inland Sea was of supreme importance for Kiyomori, who envisaged turning Japan into an economic power through trade with the Song Empire. It thus made perfect sense for him to come to Itsukushima to venerate the deities of maritime safety.

Kiyomori is known to have visited Itsukushima Shrine at least 10 times. In March 1174 he accompanied the cloistered emperor Go-Shirakawa on a pilgrimage to the shrine. This visit by two of the country’s most important men led many court nobles to follow suit, and worship of Itsukushima Shrine became popular among the political elite.

The glory days of the Taira did not last long, and the clan was wiped out following its defeat by the Minamoto at the Battle of Dan-no-Ura in 1185, just four years after Kiyomori’s death. But this did little to diminish the authority of Itsukushima Shrine. The pavilions that Kiyomori erected have been rebuilt over the centuries and continue to stand today in all their dignity. Itsukushima Shrine is an enduring monument of religious art, left to posterity by one of the most remarkable figures in Japanese history.

Uchida Kazuhiro
Born in Yokohama in 1962. Graduated from Waseda University, where he majored in Buddhist art. Freelance writer and editor. Has written for many publications, including Meijō o yuku (Visiting the Great Castles), Chūgoku yūyū kikō (Journey Through China), and Itsuki Hiroyuki no hyakuji junrei gaidobukku (Itsuki Hiroyuki’s Guide to 100 Temples). His best-known work is Furusato no butsuzō o miru (Buddhist Images of Regional Japan).