Society Mar 11, 2013
Taylor Anderson was one of the two American victims of the 2011 Great East Japan Earthquake. The 24-year-old was an English teacher in Ishinomaki, one of the northern coastal cities swept by a devastating tsunami immediately after the earthquake. Soon after her death, the Anderson family established the Taylor Anderson Memorial Gift Fund to carry on her spirit by assisting grassroots programs for youth in the disaster-hit areas. Andy Anderson, Taylor’s father, contributed the following article with his son Jeffrey.

In the Great East Japan Earthquake we lost our daughter and our sister—Taylor Anderson, an American English teacher—as many others in Japan lost their loved ones. We lost her in a foreign land, in Ishinomaki, Miyagi Prefecture. Safe across the ocean, we were detached from the unbelievable destruction. The people of Tōhoku lost their whole world on March 11, 2011, and we lost only a part of ours.

But it only takes a part to link us to Japan: one person who loved a distant land, who loved its people, who loved to teach its children, who loved its unique culture. To cope with our loss, we have sought to emulate the person we loved and to be the shadow of her passion. It was Taylor who taught us, through her study of Japan and its literature, that solving problems can best be done by connecting with others.

We will never be at peace with losing Taylor, but coming to share her passion for Japan, and acting as we think she would have in the wake of the Great East Japan Earthquake, have been among the most rewarding experiences of our lifetimes.

Reaching Out to Children

Taylor had a distinct love of reading, spending most of her free time allowing her imagination to wander freely through the worlds created by books. It was this desire to explore that drew her to Japan. As we have come to share Taylor’s passion, we wanted to share this one with Japan.

In order to do this, we created reading corners called bunko for seven of the institutions in Ishinomaki where Taylor taught as a participant in the Japan Exchange and Teaching Programme. They were beautifully made by a local woodworker, Endō Shin’ichi, whose children were Taylor’s students.

Each bookcase contains some of her favorite childhood books, along with many titles chosen by the school. These contributions have replaced some of the books lost to water damage in the tsunami while providing an opportunity for us to share some of Taylor’s world with the children, as a form of early-age cultural exchange.

To help the children most in need, those who lost their parents in the disaster, we are working with two groups—Living Dreams and Smile Kids Japan—to provide long-term support to orphans. The Taylor Anderson Memorial Gift Fund, which we established in March 2011, is supporting the Asahigaoka Gakuen children’s home in Kesennuma, another city in Miyagi Prefecture. We have delivered toys and educational materials; in August 2011 and 2012 we also sent children to an “English Adventure Camp” in Japan, providing an opportunity for them to start learning English.

The fund has also supported a Christmas Wish program, which provided personally chosen gifts to the 72 children and organized a Christmas party for them with JET Programme participants in each of the last two years.

Another way that Taylor’s fund is involved with orphans is through its contributions to the Fund for the Future of Children Affected by the Great East Japan Earthquake. This valuable program helps children who have lost their parents pay for their education. .

We are also involved in continuing the education of high school graduates who have been affected by the earthquake. Taylor Scholarships will provide financial assistance to high school graduates from the disaster-affected areas in Miyagi Prefecture who attend one of two Sendai YMCA vocational schools starting with the school year beginning in April 2013. Joint funding for these scholarships will come from Taylor’s fund and the local YMCA. And we have also taken part in a successful fund-raising drive by the group Volunteer Akita, based in Miyagi’s neighboring Akita Prefecture, to send a high school senior who was living in an orphanage to college.

Finally, Taylor’s fund is helping to defray entrance exam costs for students from Ishinomaki and other disaster-affected areas. To take advantage of many university scholarships offered to those affected by the earthquake, students and their families must pay considerable fees to take the tests required for school admittance. Taylor’s fund has helped to reduce this barrier by contributing to the nonprofit group Hope for Tomorrow, which assists families with exam fees and other related costs.

Through these approaches, we are making Taylor’s fund a source of support every step of the way, improving the educational opportunities for those who are part of this tragedy. The future of the disaster area, especially that of the children there, is of utmost importance; but we are proud that the fund is involved in making the present better for those in need.

Outside the Classroom, Outside Japan

Outside of the schools where she was assigned, Taylor contributed her time to cultural exchange in Ishinomaki. Along with other JET participants, who have much to offer outside of the classroom, she taught a group of Japanese adults the English language and American culture and history. 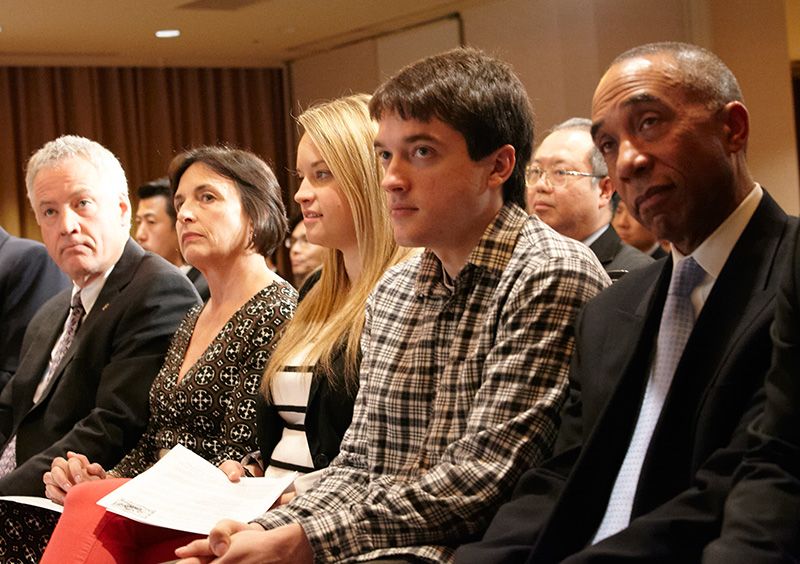 The Andersons at the March 8 screening of “Live Your Dream” at a hotel in Tokyo. From left to right: Andy Anderson, his wife Jeanne, daughter Julz, and son Jeffrey. Sitting far right is Regge Life, who directed the movie. (Photo by Hanai Tomoko)

Miyagi/Sendai JET Micro Grants provide financial support to enhance English language and foreign culture programs initiated by JET participants in Miyagi Prefecture. Applications for Micro Grants are submitted to the Miyagi Association of JET board and the Anderson family for approval and funding. This program empowers JETs to go beyond the classroom and be active participants and leaders in their schools and communities.

Cultural exchange through the Internet, books, music, videos, and ideas is where Taylor’s love of Japan began. This love was truly confirmed when she first went to Japan. Nothing is more powerful than actually visiting the culture you love—meeting its people, hearing the language in its native land, seeing its landmarks, and eating its foods.

The YMCAs of Tokyo, Sendai, and Richmond and the National Council of YMCAs of Japan held a Taylor Fund YMCA Youth Exchange Program in July and August 2012 for seven Ishinomaki junior high school students whom Taylor had taught.

The students visited Washington DC and the cities of Richmond and Williamsburg, Virginia. They attended a YMCA camp in Richmond and enjoyed homestays with families whose children attended St. Catherine’s School, Taylor’s alma mater. Prior to their visit, 23 St. Catherine’s girls had visited Japan as part of the Kizuna Project sponsored by the Japanese government. It is our hope that this program will lead to further student exchanges in the future.

The Long Road Ahead

We hope to help with Ishinomaki’s recovery for as long as we can. We know that this would be Taylor’s wish, just as it is that of her fellow JET members.

It will take years for “a new normal” to be established. The calamitous events of March 11 will be remembered for generations. That is why IsraAID, the Tokyo YMCA, Project Yui, and other NPOs are collaborating with Taylor’s fund to sponsor a community center in Ishinomaki. This space will be used to facilitate the ongoing activities of the various groups supporting Ishinomaki’s residents, as well as providing the community with a physical space for healing and remembrance. 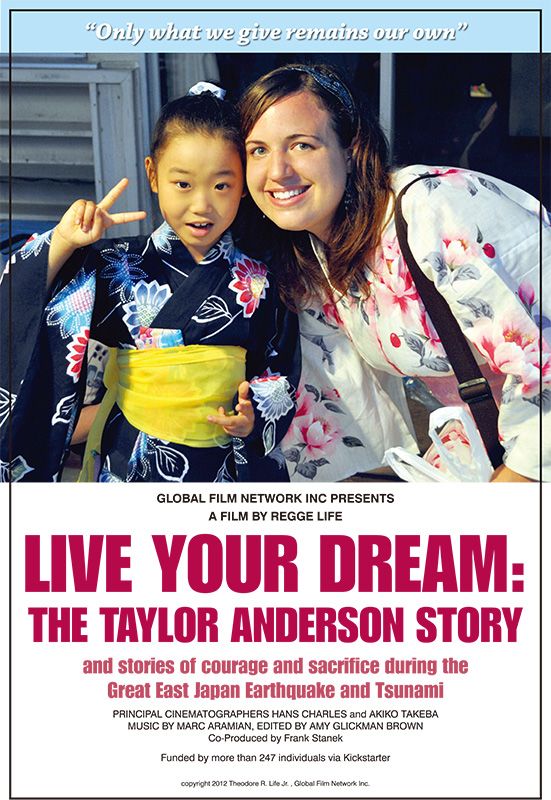 We will visit Japan on March 4–11, 2013, to share a film about Taylor called Live Your Dream: The Taylor Anderson Story. The title comes from precisely what Taylor was doing in Japan. We know what she would want today—and what all of us want, no matter where we are and what situation we find ourselves in—is to live our dreams.

As we have taken this journey of recovery with Tōhoku we have met many new people and made many friends.

We are deeply grateful to those who have donated to the Taylor Anderson Memorial Gift Fund and collaborated with us. As we have put in place each of these projects, we have come into contact with more and more people on both sides of the Pacific. They form a global community, geographically separated yet joined by a common dream, a dream that Taylor had: of cultural exchange, of happy children, and of hope for the future.